So much for trying to rest and relax before my two major vacations! This morning I had my obgyn visit as I blogged about earlier…and this afternoon Kye and I had a nice little rush-as-fast-as-we-can to the dr visit. Awesome.

Yesterday Kye had an awesome nap. He slept from 1-5! I was pumped until he woke up and I took his temperature. It was right at 100. I honestly figured he was teething. He’s always been a “terrible teether.” They take ages to come in and he gets diarrhea, fever, and won’t eat. Plus he gets mega fussy. When he wouldn’t touch his dinner I still assumed teething but then he started acting pretty lethargic and reminded me of the day we went to Wild Adventures. I went ahead and gave him Tylenol and Mom came by to help me bathe him (Zach’s been out of town…always great timing on these work trips huh?). We put him to bed at 7 so he was only awake for two hours. My night reflected that…as neither of us got much sleep. He woke up several times through the night and actually ended up waking up at 5:30 and never going back to sleep. I ignored him until 6:30 then just let him get up early. Not a great start to the day!

I couldn’t cancel my appointment because it gets tricky when you’re on the every two week thing and with Vegas and Disney I wouldn’t be able to make it up in time to keep me on track. So I called Mrs. Charlotte and she didn’t mind still picking him up. He wouldn’t eat any breakfast but she managed to get him to eat a little at Chicfila. I gave him Tylenol when he woke up and again before nap. My hopes were that he’d break fever and feel better and if he didn’t I planned to take him to the walk-in clinic first thing tomorrow morning. He slept horribly for his nap and woke up at 2 (he goes down at 1!). I ignored him until 3 but then just let him get up because it was so sad to hear him crying when I knew he didn’t feel good. He picked out a movie (Sleeping Beauty…RANDOM choice kid!) and I let him watch it while telling him he had to drink lots of water. I checked his temperature at 4:15 and it was 102.

I’ve NEVER seen a thermometer read 102. Kye’s never had one that high. I immediately called the pediatricians office, assuming the walk-in clinic would close at 5. Nope. They close at 4:30. By the time I realized that it was 4:20 so I raced around getting clothes on both of us then left. I left lights on. I left the movie playing. I left the dogs running around out of their crates. I stayed on hold with the walk-in clinic the entire ride there and decided when we almost had made it that they obviously weren’t going to answer so I left a message. I ran to the door and they were closed. Dangit. So I tried my luck at Dr. Griner’s legit office and ran in begging them to still let him be seen. Luckily for me it was 4:45 and the office does close at 5 and they were nice enough to get us back.

We saw Kelly, who we have seen before (with Kye’s rash), and she was great. His temp was down to 101 which was good. She said his ears looked great and breathing sounded good. She looked in his mouth and said she saw some spots so she’d need to do a strep test. His first one…I remember being that age and SCREAMING when they did it. I had to literally be held down! I prepared Kye when she left to get the swab. I told him that the dr would have to put something down his throat for just a second and that it would hurt but that it would be over fast and it would help him feel better. They came in and had him lay down and right away he opened his mouth wide and said “ahhhh” so they could swab it. He choked when they did it but didn’t scream or cry. She said she had to do it again on the other side and he so sweetly said “ok” and opened his mouth again. I seriously about cried out of pride!!! He did AWESOME with it!!!!!

What’s ironic is less than 5 min after we rushed in the office, another mom and son came in. She said hers also had a 102 fever and I heard the nurses say they needed a strep test for him too. I wonder if they go to the same school?!?!

While we waited for the results he was sitting in my lap and was SO HOT that I started sweating. She came back in and said he tested negative for that form of strep but that I may have just caught it early so it didn’t show up or he may have a different type. She prescribed him three medications (1 for the strep, another in case he starts coughing, and another in case he starts puking). I asked her how long it’ll be before I get it and she said if I’m going to (which if you know me then you KNOW I have the type of luck where I WILL be getting it…) it’ll be within 24-48 hours. Perfect. So I’ll be having a high fever and mega chills while on a flight to Vegas. Awesome.

We left the dr. office and went to Walgreens. I dropped off his prescriptions and bought him lots of pedialite stuff, some gatoraide, and myself some benedryl cream for my butt (the shot reaction spot haha). I also picked up my prescription from that morning…it was $33! I told them just to hold it and when I came back to get Kye’s I’d see if I could afford it or not. I raced across town to pick up Little Caesars. Kye hadn’t eaten all day but mentioned he wanted pizza so pizza is what we got 🙂

Once we got home he ate SO well! He drank the pedialite and ate almost 2 pieces of pizza and 2 breadsticks. When we walked in from the car he was DRENCHED in sweat and his clothes were completely soaked. I had him in the car seat, with a blanket, and didn’t turn on the ac so maybe he broke his fever? He didn’t have the chills anymore and acted so much more like himself. Mom came over again to help me bathe him (Zach will be walking in the door any minute…conveniently after the stress-filled day comes to an end haha). Then after he went to bed I ran back up to Walgreens to get his prescriptions. $55 worth! Plus the co-pay for the visit so that’s a nice $90 day…not even including the over the counter pedialite stuff I had to buy totaling another $17. Dang.

While on my way to Walgreens I thought through my medicine and decided I needed to get it. It’s one of those things you use right before bed and need to lay down after using it so I knew I needed to do it tonight, tomorrow night and Friday night since I’ll be on an airplane ALL night Saturday night. I told them to go ahead and give me that prescription while I was there and she added another $70 to my bill. Um no. I told her I did not want it and that I’ll have to call the dr tomorrow to get something else. These medical companies are making a FORTUNE!!!!

Tomorrow morning Kye starts his antibiotic so he’s missing school for the first time ever. She said as long as he doesn’t have fever anymore that he should be fine to go Friday. He’s already missing three days for Disney so I’d hate for him to miss anymore! My plan for tomorrow is a LOT more movie watching so he can rest and recover and I can pack and get things ready. It really stinks to see him like this but I am thankful for the timing. At least he is getting it out of his system now so he’ll be healthy and HAPPY for our Disney trip. Now I just hope none of the rest of us get it by then or if we are going to get it I hope we can hurry up and get it so we can get over it in time. Maybe we’ll all be on antibiotics at Disney 😉

I am so, so appreciative to Dr. Griner’s office for getting us in and treating him at such short notice. I’ve never dealt with this type of situation before and it’s all new to me! The rushing to the dr thing is def not fun or something I hope to have to do again. Thankfully, they told me if I get a fever to just call them (since I’m now officially their patient too!) and they can get me some medicine too. If I’m going to get it then I hope tomorrow is my day so I can start the meds before Vegas rather than having to hunt down a Walgreens when we get there. Hopefully Kye’s fever really did break during the car ride today and he’ll be feeling much better tomorrow 🙂

where he’ll be spending the day! 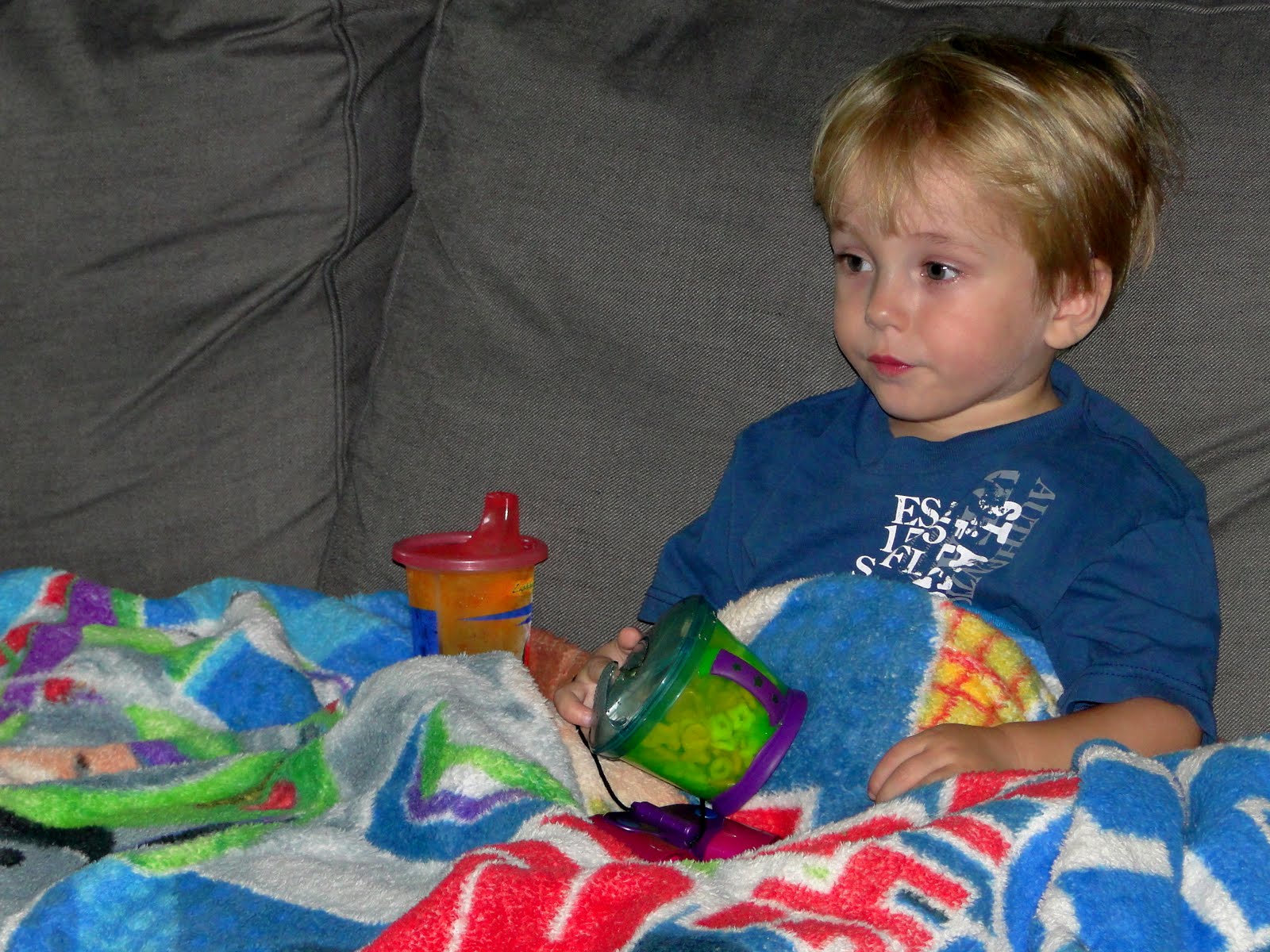