Sunday morning came too quickly! Got up and got ready for church then after services we picked up Ashley and went out to Zach’s parents house for lunch. I felt bad it was so rushed but we had to hurry home to get ready for the third shower of the weekend!

While home Mom and I straightened up the house because Zach was having some friends over to watch the Super Bowl after night church!

We got to the Church at about 3:45 for my church baby shower!

This is outside our church…with I guess what’s supposed to be a stork? haha 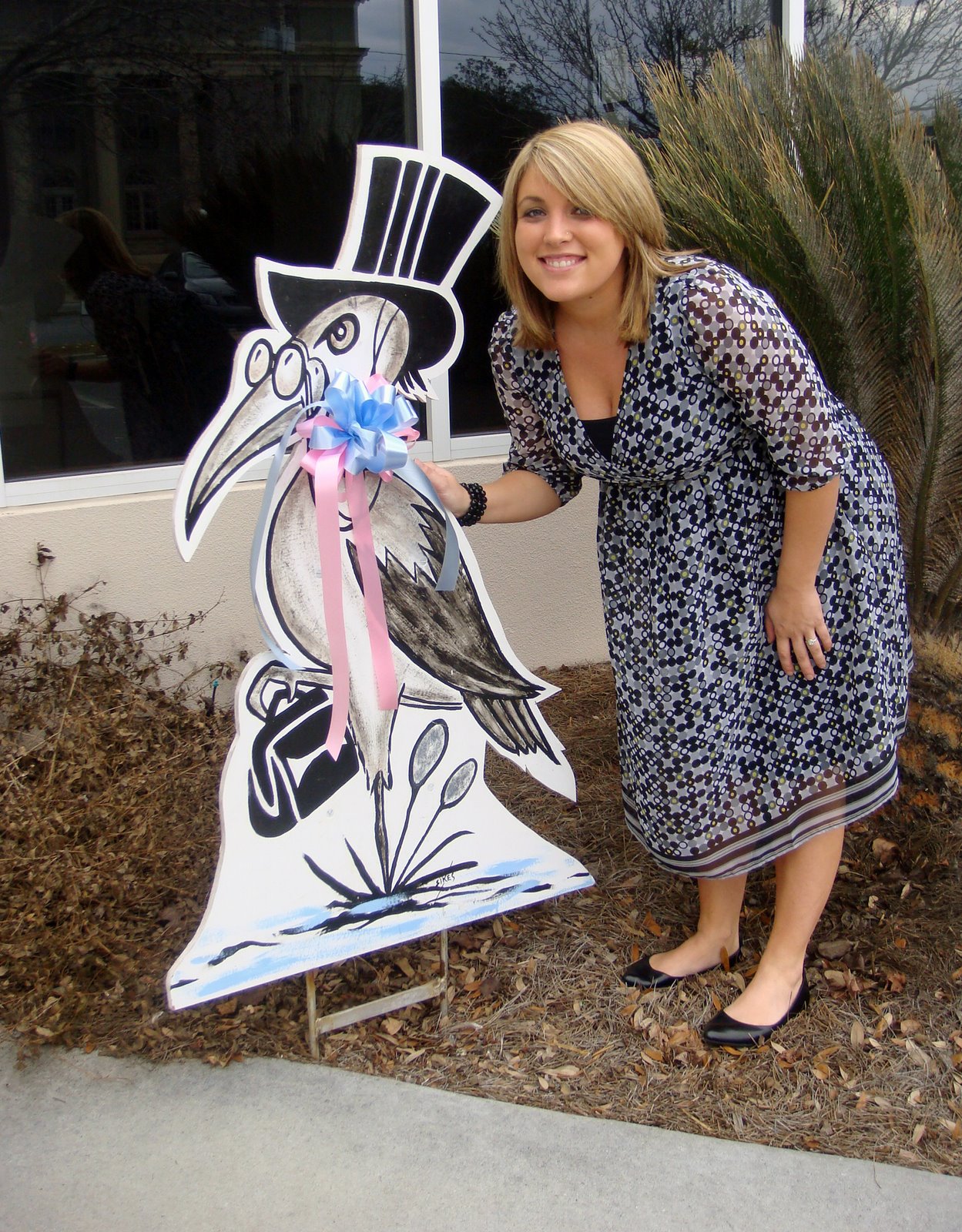 It was very nice of Mrs. Charlotte and Little Mama to come to the shower since they still go to our old church in Lakeland. I learned my lesson about wearing anything with red or pink or orange in it to this building after our dessert reception after the wedding where I was wearing a coral dress and totally blended in with the crappy carpet! haha! I guess Little Mama and Mrs. Charlotte didn’t catch that memo! 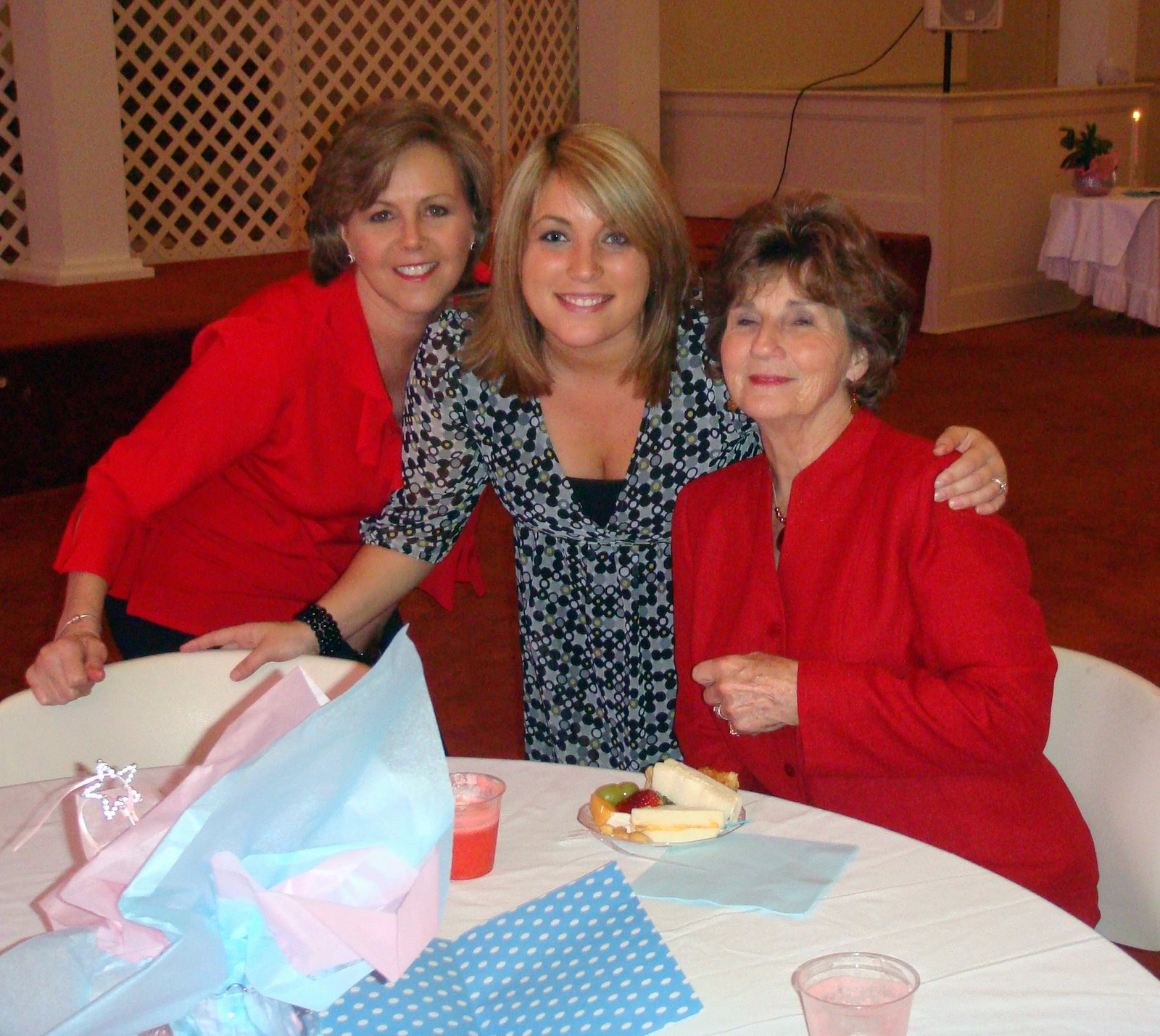 It was so awesome to have Mom be able to meet everyone at church…it was a mad house but I think it made her feel proud to see how much everyone loves Zach and I. We are truly blessed! It was tough saying goodbye to Mom when she left because the next time I see her I’ll be a mom myself!!! So crazy! I think I would have bawled my eyes out but luckily I was at church and couldn’t break down like that 🙂 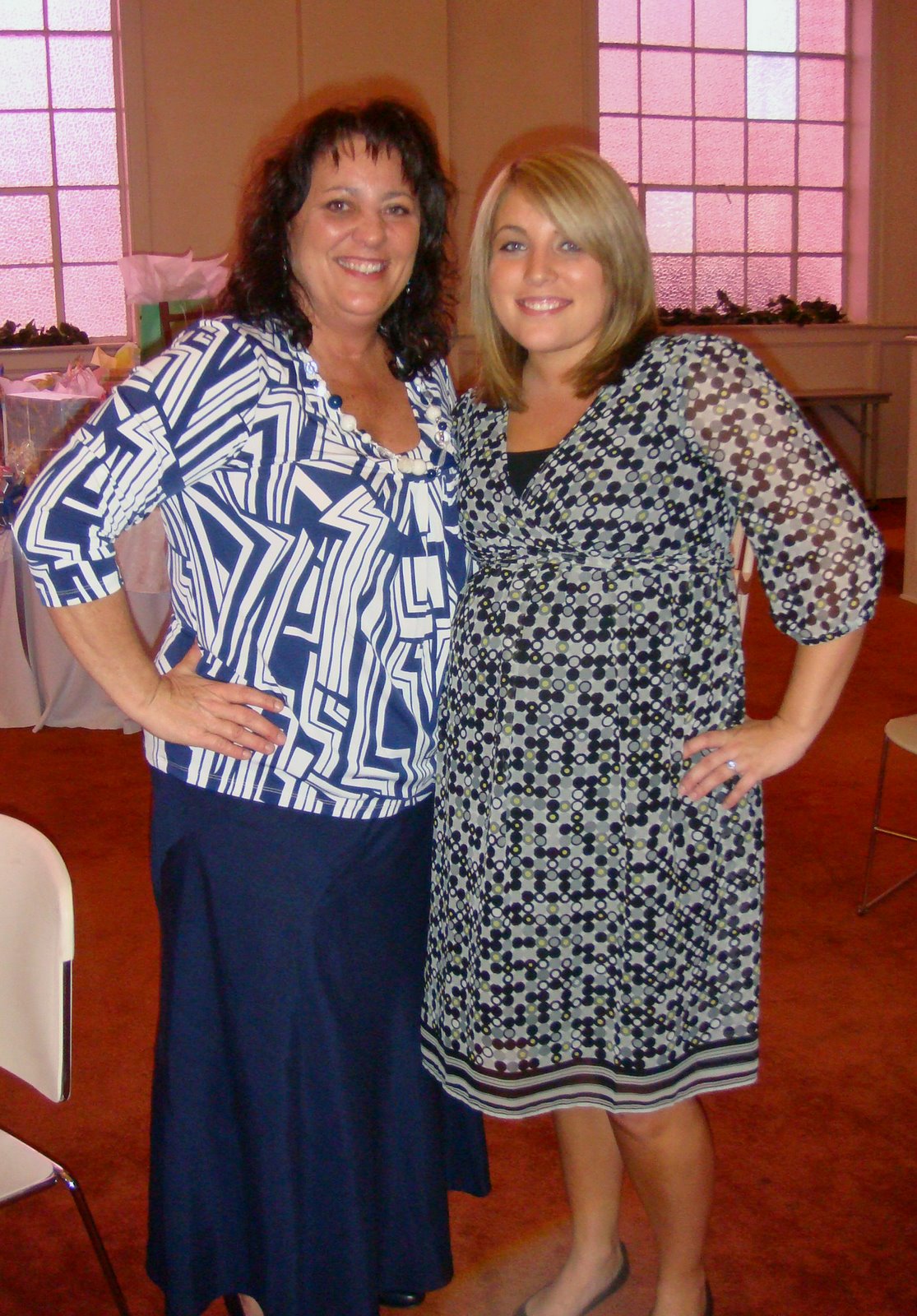 Little Kelsey was so sweet all weekend! She really reminds me of myself when I was in 5th grade…we even looked alike! At both the Parker Shower and the Church Shower she helped hand me all the presents. Of course Mom adored her…she’s such a teacher! 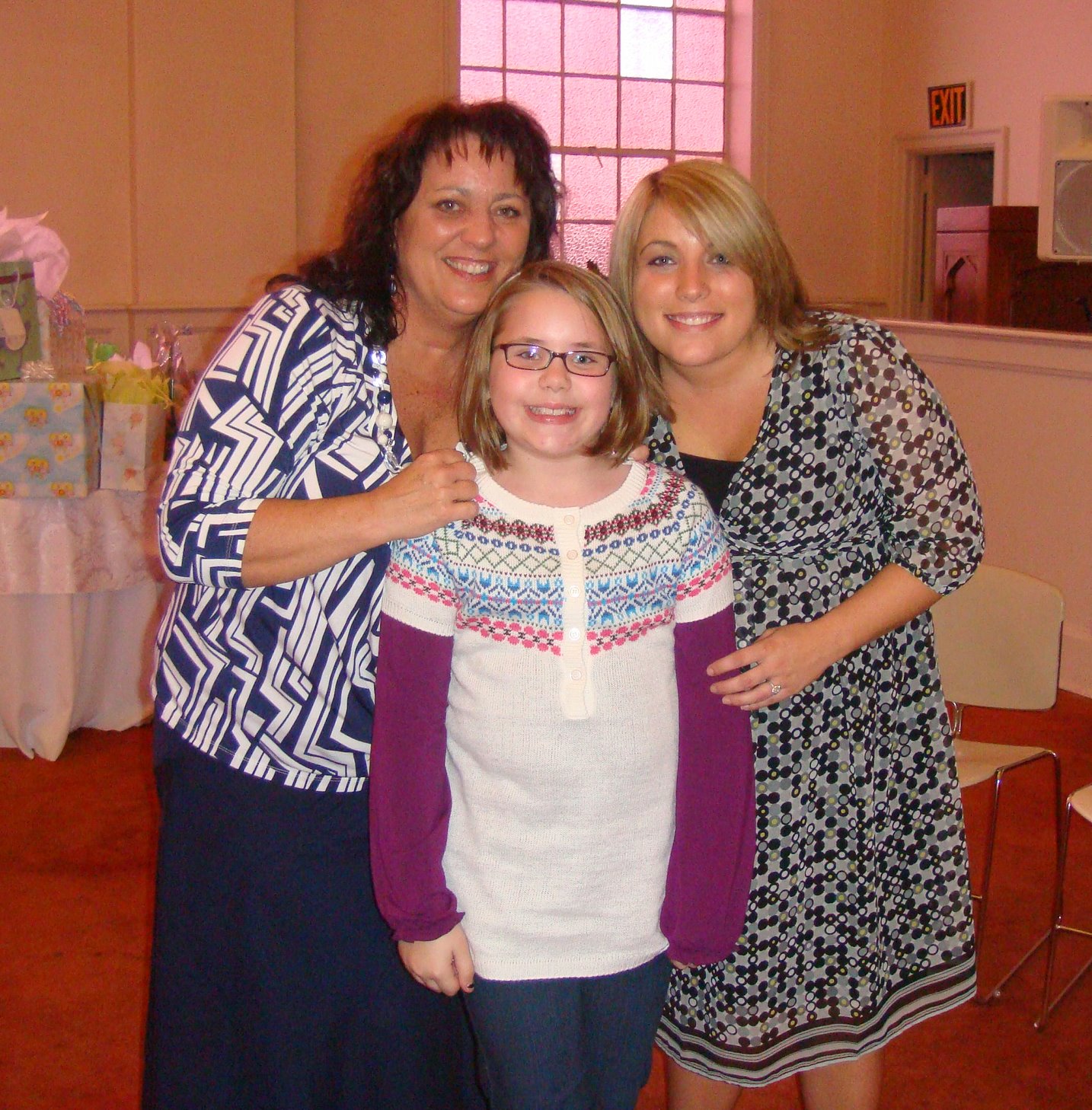 When I heard about Church Showers I heard that you’re straight up opening presents for an hour straight. I thought it was an exaggeration so I was visiting with people and letting the gift table pile up…but then one of the hostesses got onto me and made me sit down and start opening. I literally did not STOP from about 4:15 until 5:30!!!

It’s a funny situation because everyone is just mingling and eating and not paying attention at all to anything I was doing. So I was just opening, opening, opening without even stopping to say thank you (I said a big thank you at the end to everyone as a whole and am sending cards of course). When I opened this blanket Mom and I got all excited because it was from one of the older ladies I go to Bible Study with on Tuesday mornings! We assumed she made it so we made a HUGE deal out of it and even called to her in front of everyone to thank her…turns out…she bought it. haha! 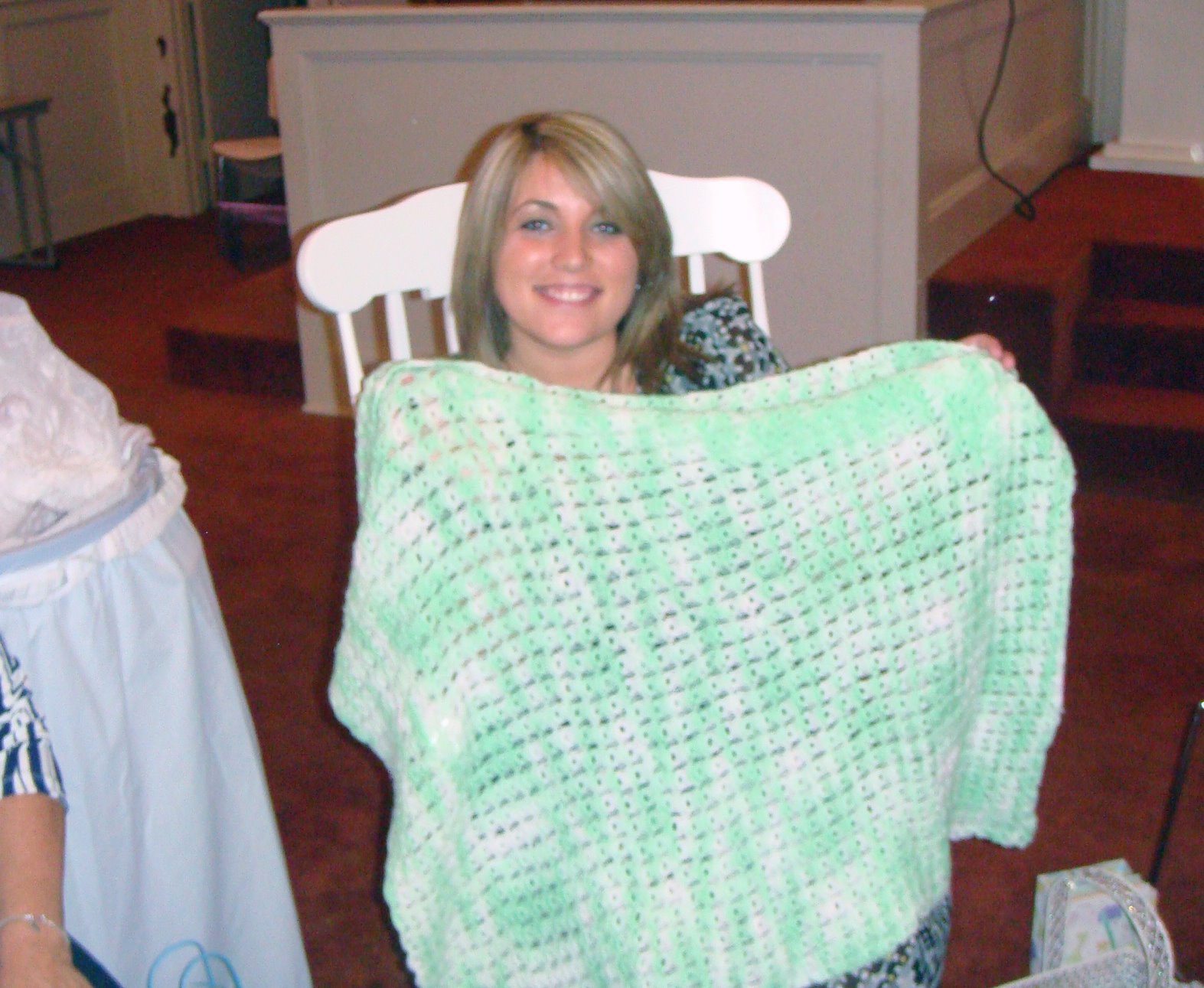 Ashley has been such a great friend through all my showers! I know at first she was worried how having a baby would affect our friendship but I think all this involvement with everything each step of the pregnancy has helped her to see that I won’t abandon her once Clover arrives! She volunteered (I think) to write down all the gifts as I opened them and who they were from…I don’t think we realized what she was getting herself into! Both these pages and a third were FULL. Zach got there at 5:15 and he had to open too in order to get it all done before the 6:00 night service! 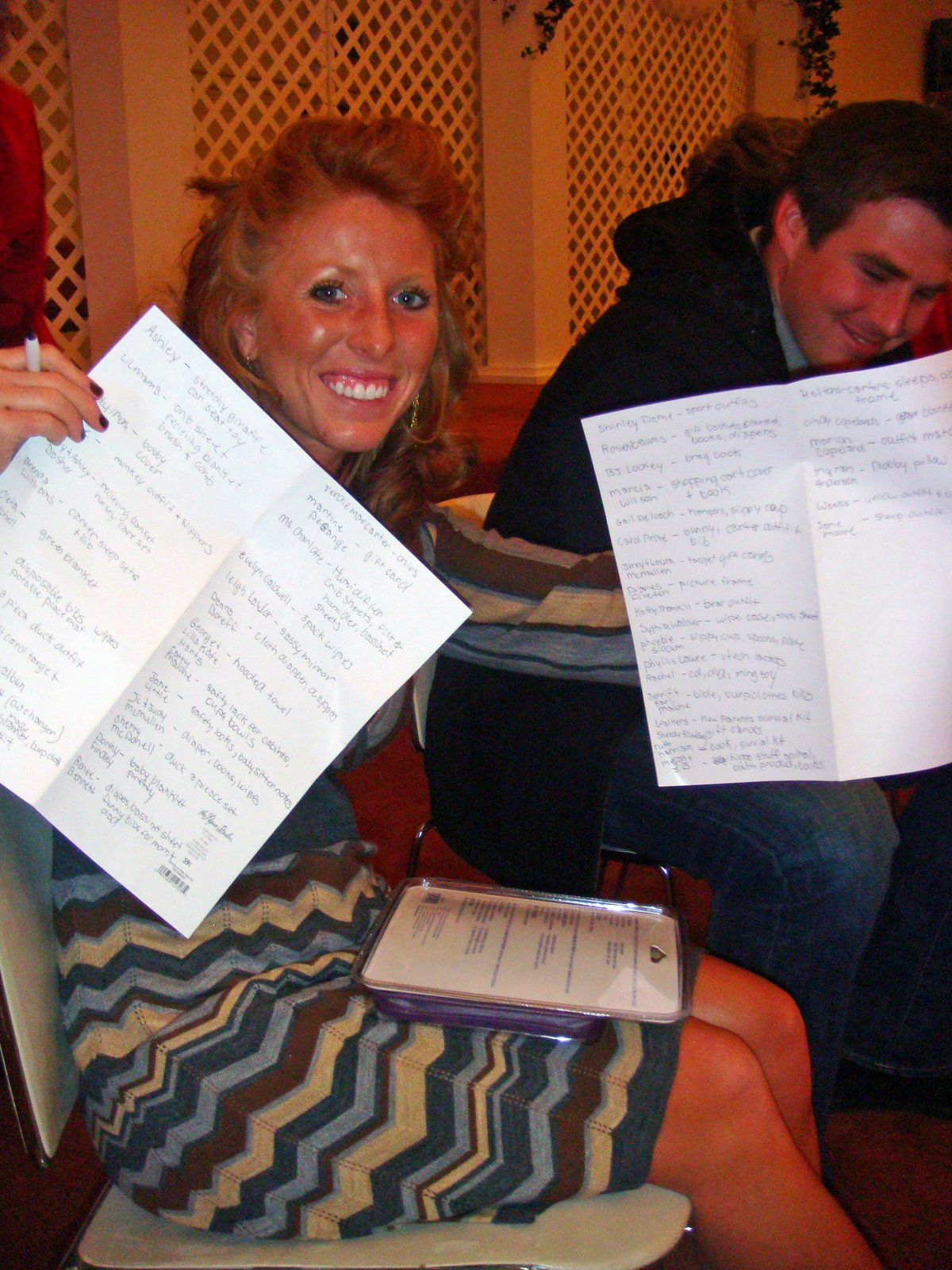 Loading up SOME of the gifts to the car! We got so much stuff it’s impossible to list it all here but some of the things included: the boppy pillow, boppy cover, toys, humidifier, books, lots of neutral clothing, gift cards, and several baby necessities like diapers! 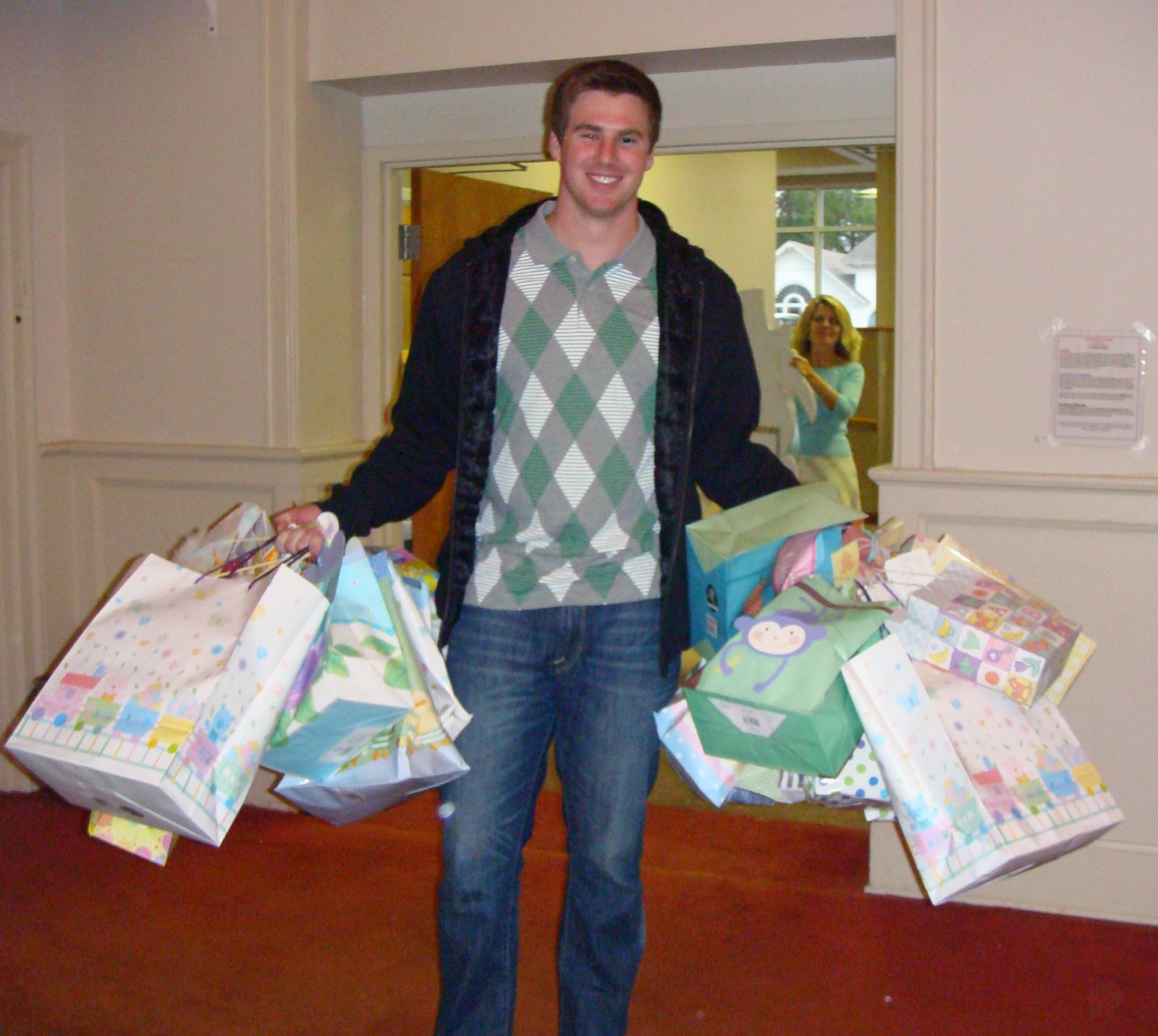 We didn’t even mess with it all that night because we got home after 7 then had people over for the Super Bowl so on Monday I opened up the car and unloaded it all into the garage and sorted out everything. Can you believe this is all from ONE shower??? I have 92 thank yous to write!!! It really was so sweet of everyone to think of us and our baby and it really meant a lot to me! 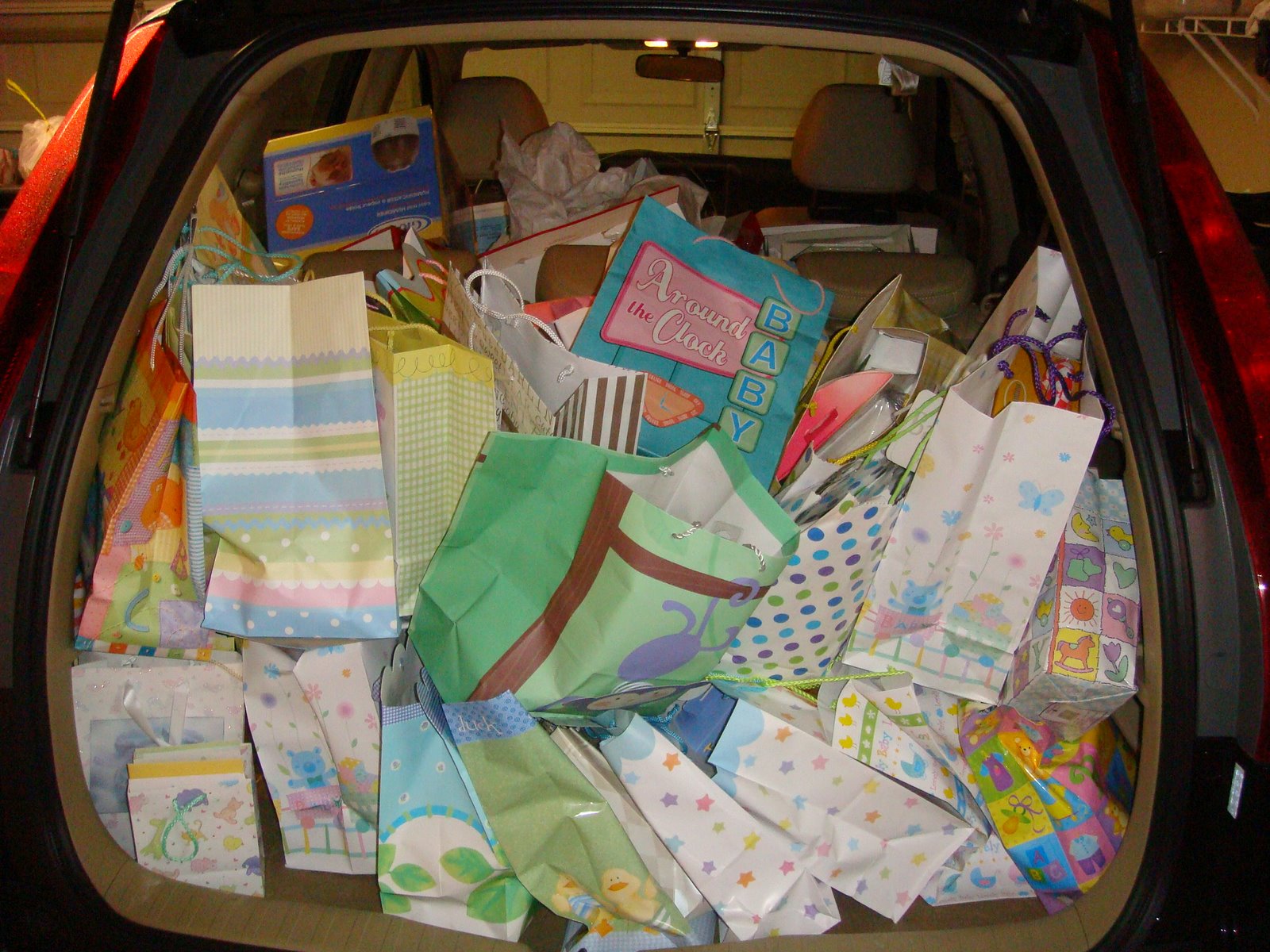 Even though I was so so tired I managed to put on a happy face (something I wasn’t able to do all weekend…ask Zach or Mom I was pretty crabby when not at a shower!) for the mini-Super Bowl get together. It was a lot of fun and Zach, Ashley, Zach and I ended up staying up until after midnight playing board games!

It was a “bring your own meat” event…do you think Zach and Codie are compensating for something? haha 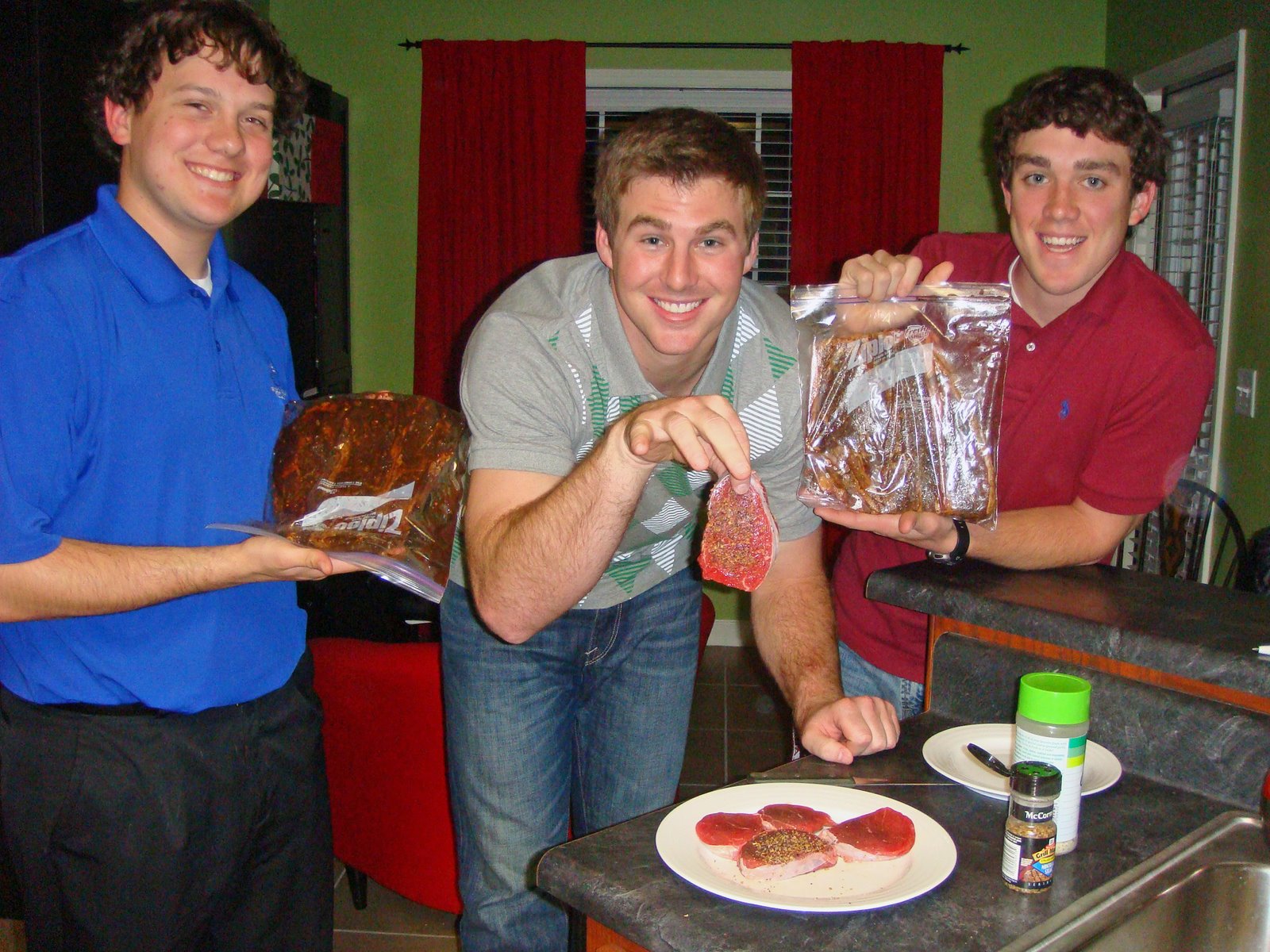 Even though if I had the weekend to do over I’d probably eliminate somethings so I wouldn’t have been so tired and in so much pain afterward, it was still a really fun weekend and it was filled with many memories I’ll never forget!!!