This past weekend was pretty much insane. I overloaded myself but it was all worth it! I spent all day Friday cleaning the house and getting ready for Mom to come for the weekend (cleaning seriously wears me out now! isn’t that sad?). Mom got here at about 9 on Sat morning and we got ready to go to the Parker shower!

It was at Aunt Karen’s and there was a great turn-out! Probably 30 people no joke…sadly I didn’t get any pictures though! The whole thing was pretty rushed (well not pretty rushed..super mega rushed). We literally ate and opened a million presents and people started leaving within an HOUR. So I didn’t really even have a chance to capture a picture!

People did get us several great things though some of which included: the super seat we wanted, a play mat, our highchair, bath tub, giftcards, and tons of other little baby needs!

Afterwards Mom and I went home to change and to meet Brandon and Chrissy who came up for our afternoon shower! Brandon and Zach went and played golf…they were so excited. It was Brandon’s first time ever golfing on a true golf course! I’m sure it made them super pumped for our family trip to St Simon’s this summer 🙂

It was so sweet of Chrissy to come up with him to go to the afternoon shower. We went back to Aunt Karen’s again (so nice of her to have two showers at her house…especially since she doesn’t even GO to showers!). The shower started at 2 and it meant a lot to me that Ashley and Katie put so much work into making it a special time.

Here I am with my lovely hostesses! 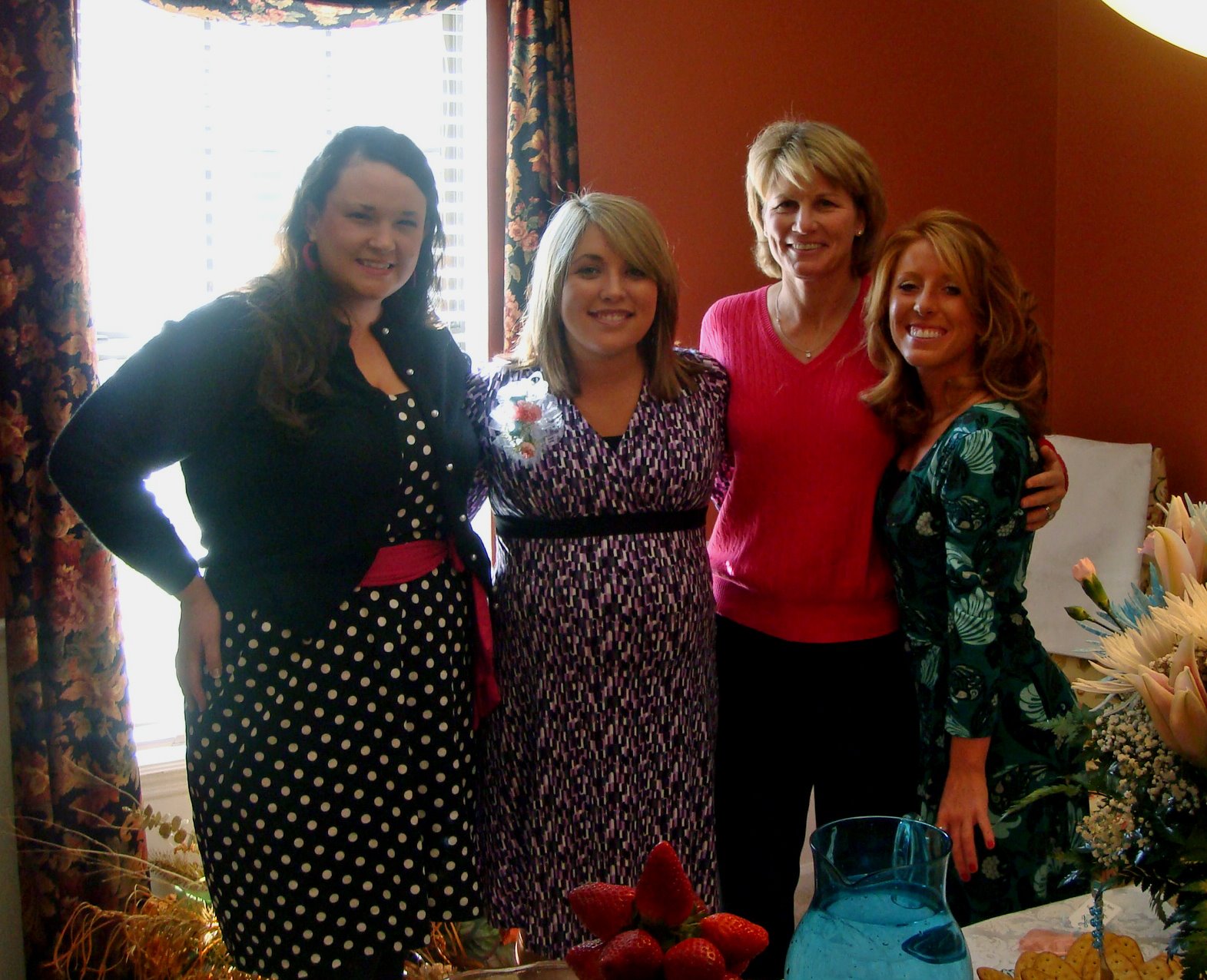 The food was awesome! Katie and Ashley made it all together from scratch and I think the shower even helped Katie get a couple of connections for some catering jobs! I wish I had a good picture of the beautiful table! They bought these GORGEOUS flowers and had these little chocolates as favors spread out all over the table. 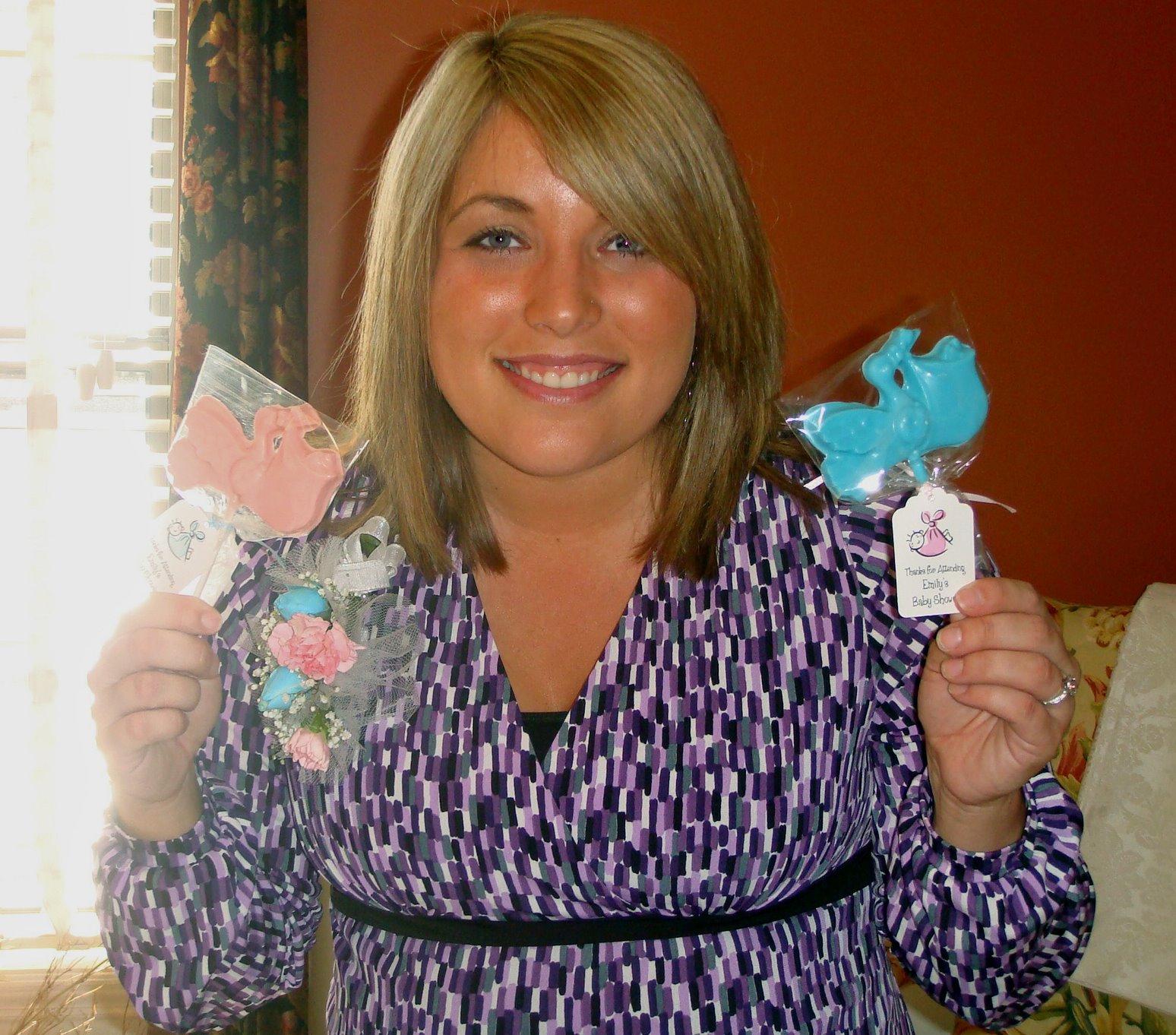 I thought this was such a cute picture. Mom was so happy to see Crissy and meet Stevie! Stevie is so beautiful and has been from birth…I hope Clover is so lucky! But even if Clover isn’t so cute at least he/she will have a cute friend haha 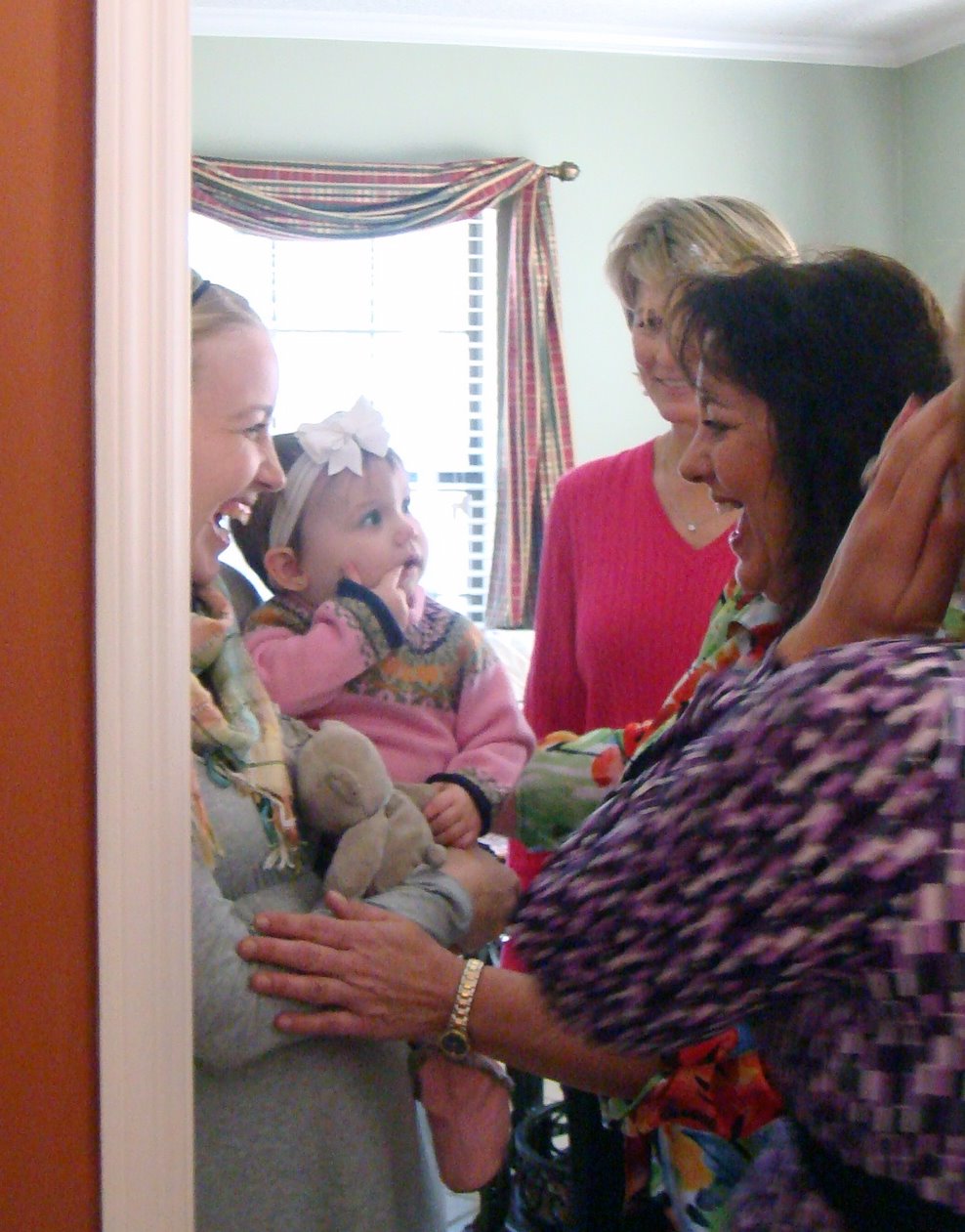 We played several fun games. My favorite was one where they passed out cards that asked me questions about my pregnancy (like has my hair gotten thicker? do I crave sweet or sour stuff? etc). Each person would read their question aloud then I’d answer it and they would read the rest of the card where it described whether my answer “means” Clover is a girl or a boy! I’ve been hardcore sure Clover is a girl for most of my pregnancy but the questions I answered ended in a BOY having 3 more points than a girl!!! Although I do have to say that the only one based off medical stuff (the rate of the heartbeat) said girl…so who knows! Ashley was hilarious because she really wants Clover to be a “she” and she got mad every time the answer lead to a boy haha

Another game we played was one where they passed around baby food and people had to taste it and guess what kind it was. It was funny to watch all the faces…Mom’s is too funny here! 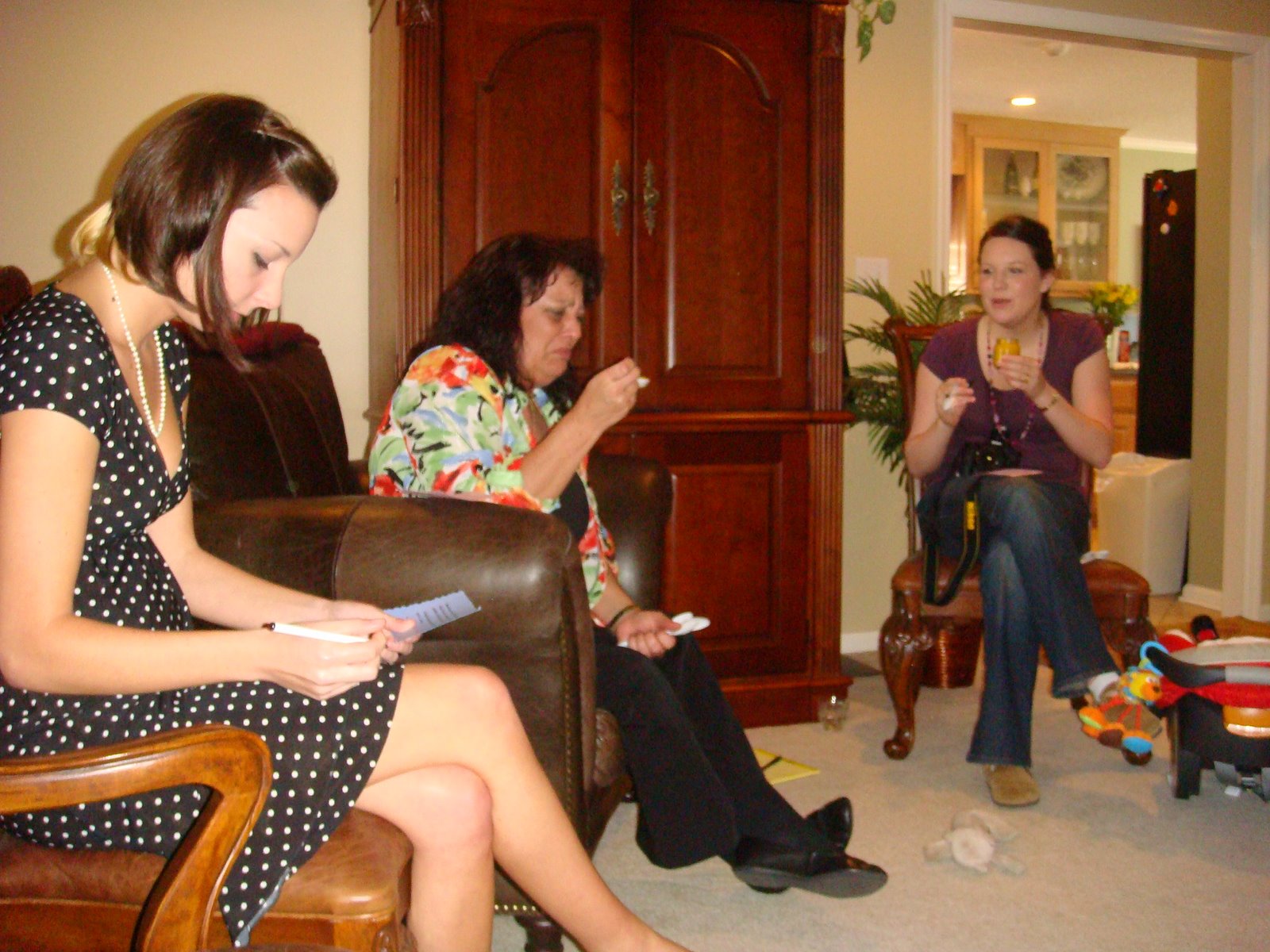 Everyone bought us such thoughful presents! Here I am with the black Vera baby bag I wanted (thanks Mom!) 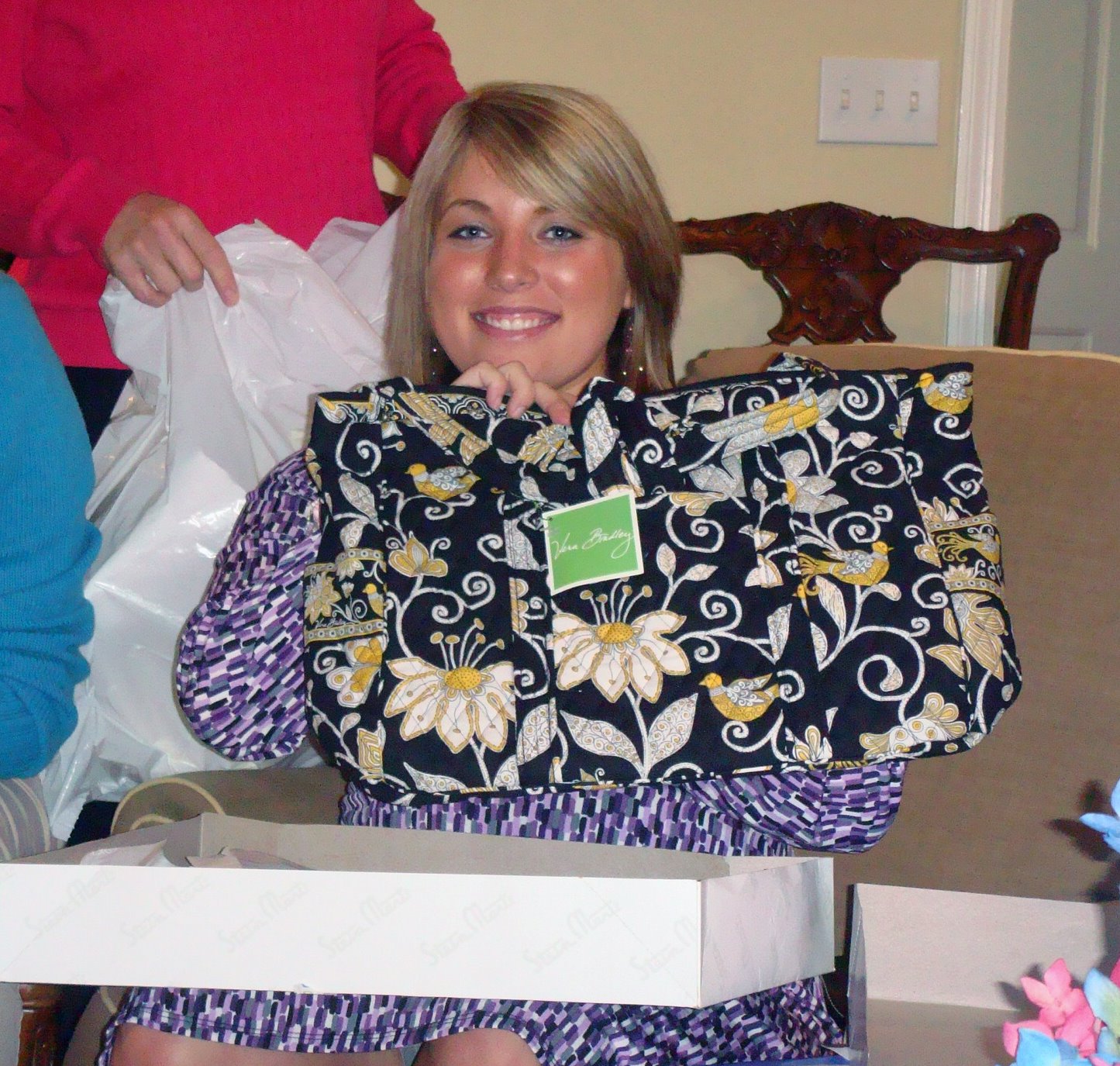 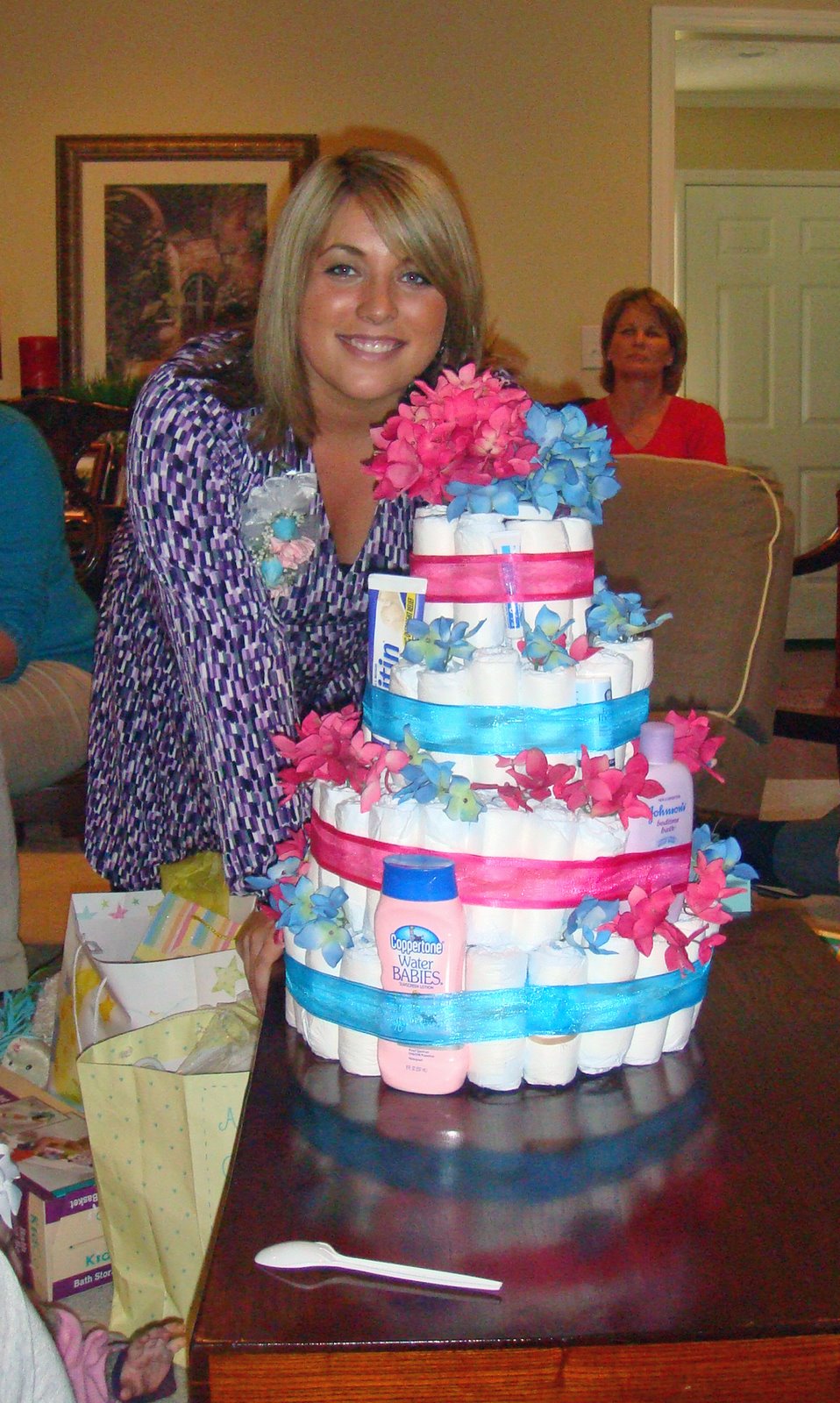 I think Mom had the most fun with all the babies that we there! Courtney brought Colt, Crissy brought Stevie and Rachael brought Macy! Won’t she make a wonderful gramma? I know she can’t wait!!! 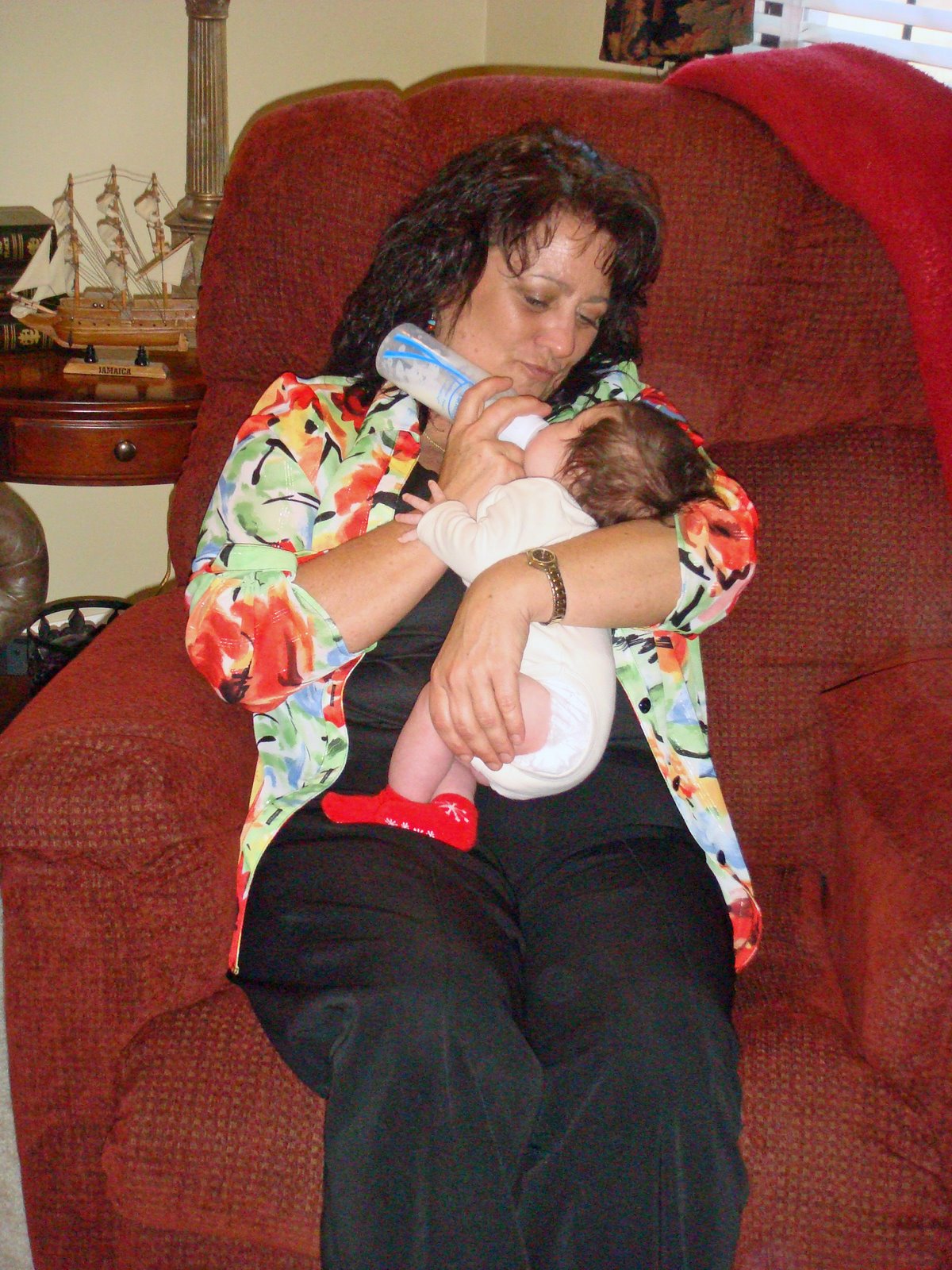 It meant so much to me that Rachael was able to come down! Luckily things just worked out for her to be with Greg, her husband, while he’s working and be able to make it to the shower. I thought Macy was so pretty in pictures but DANG in person that baby is BEAUTIFUL! And I love all her hair!!! 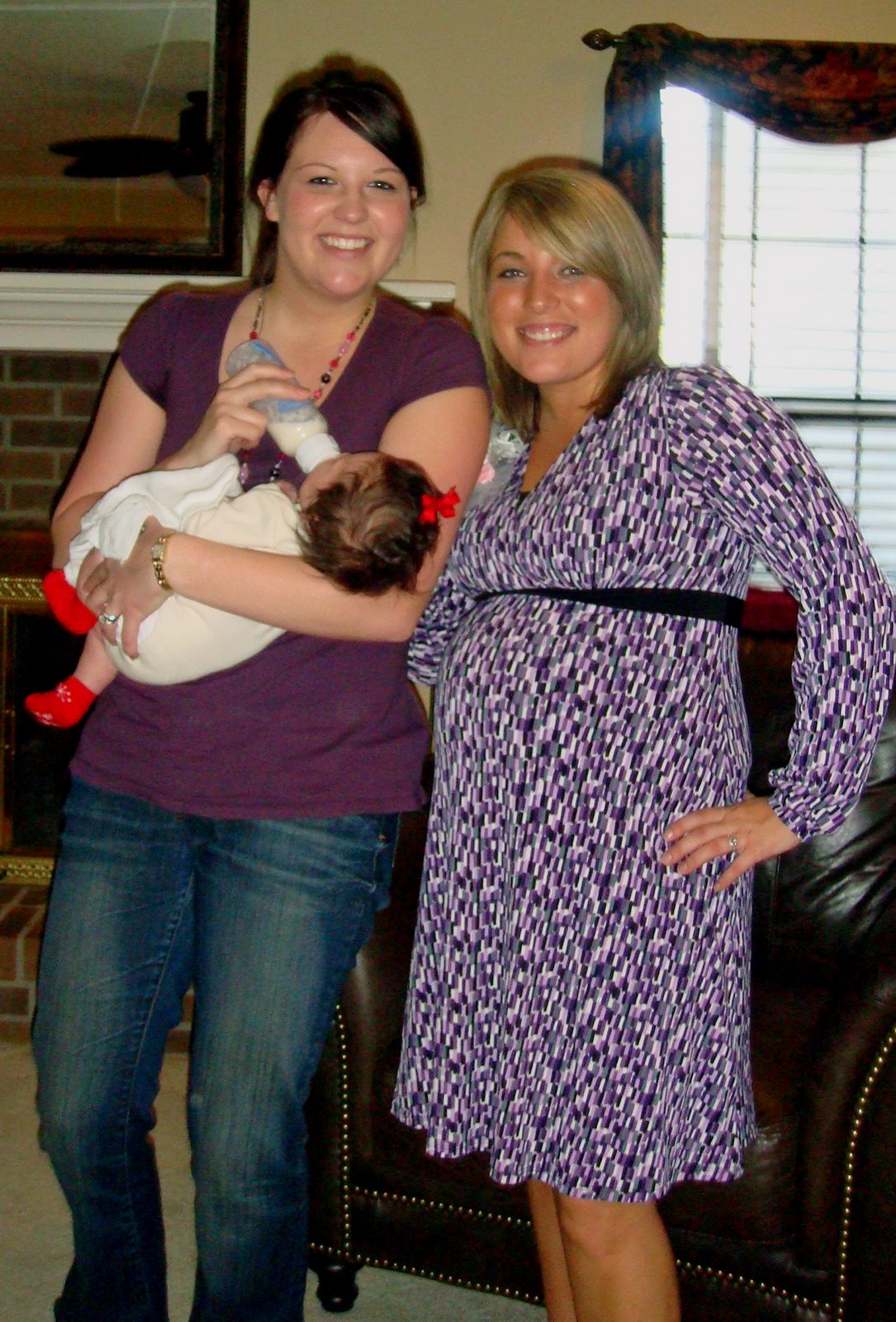 Rachael and I have always been friendly since forever but through our pregnancies we’ve really gotten so much closer (thank you for the internet!). I am so blessed to be able to reach out to her with all my questions and concerns regarding becoming a new parent. Seeing her with Macy makes me even more glad that I can lean on her as she is an incredible Mom! Hopefully I can follow in her footsteps!

The shower went so much longer than anyone expected because we all had such a good time talking and visiting! Afterward Rachael came by to see the house and got to meet Zach (it was so funny b/c she thought he was country haha). Brandon and Chrissy left soon after and Mom, Zach, and I had fun taking apart the diaper cake Katie made! We went to Applebees for dinner and went to bed DEAD tired…but had another crazy day ahead of us on Sunday…