OUR LIFE OVER THE PAST 8 WEEKS

I got off “the pill” in March and start taking prenatal vitamins.

We start officially trying in May (on our anniversary trip to Cancun!) but don’t have any luck…thankfully we have better luck in June 🙂 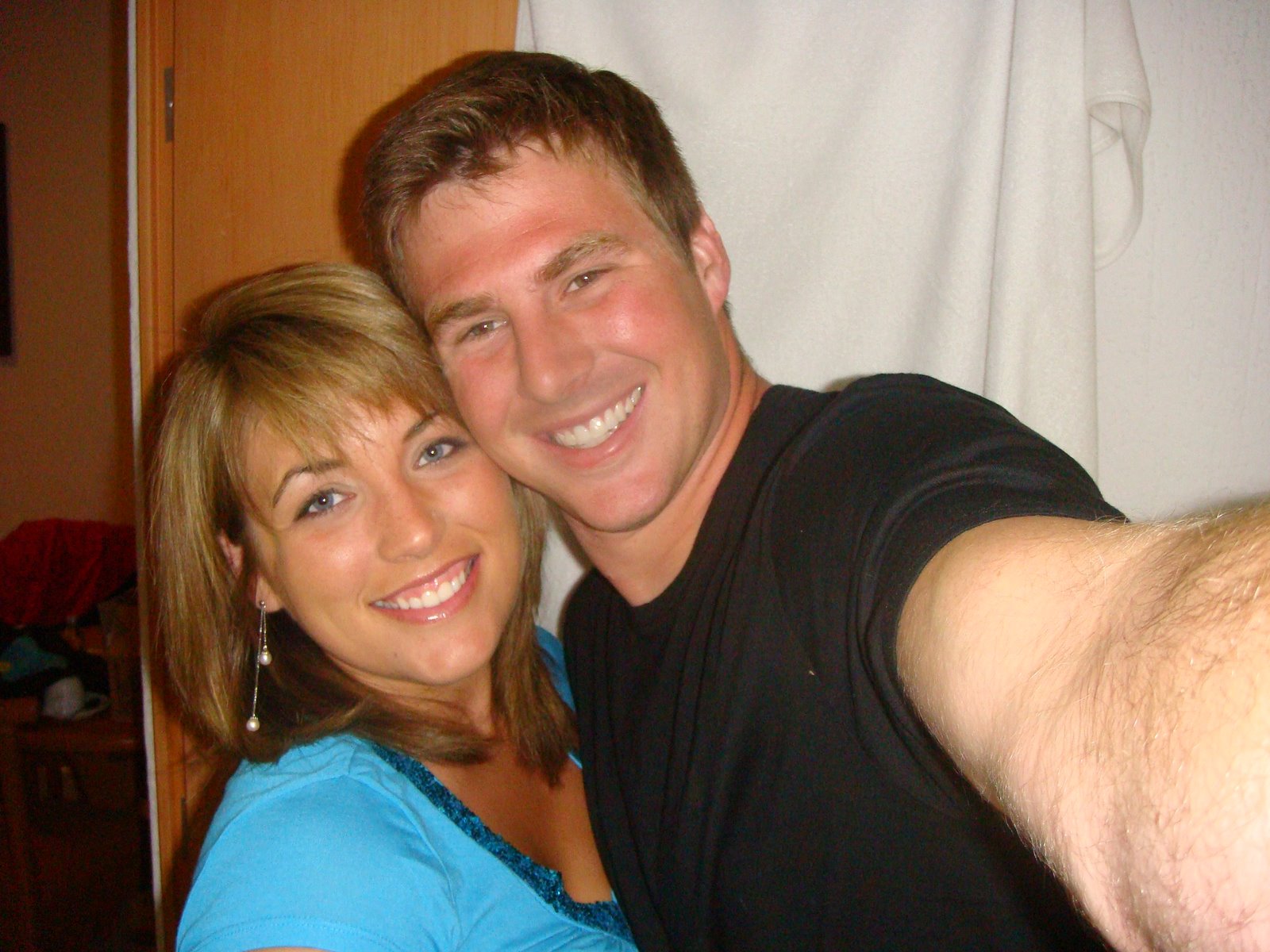 We make a baby! Have a fun day of working on our home then go on a date to Longhorn’s and to see the movie “What Happens in Vegas!”

After being a few days late for “that time of the month” we buy a pregnancy test the night of the 13th after Brandon and Chrissy leave from a visit. (Zach doesn’t want to buy one because they are so expensive so I have to beg!)

I get up early having to go to the bathroom so I use the test and see 2 lines! I run into the bedroom and wake Zach up yelling “I’m pregnant! I’m pregnant!” He jumps up and hugs me saying over and over how he just can’t believe it! 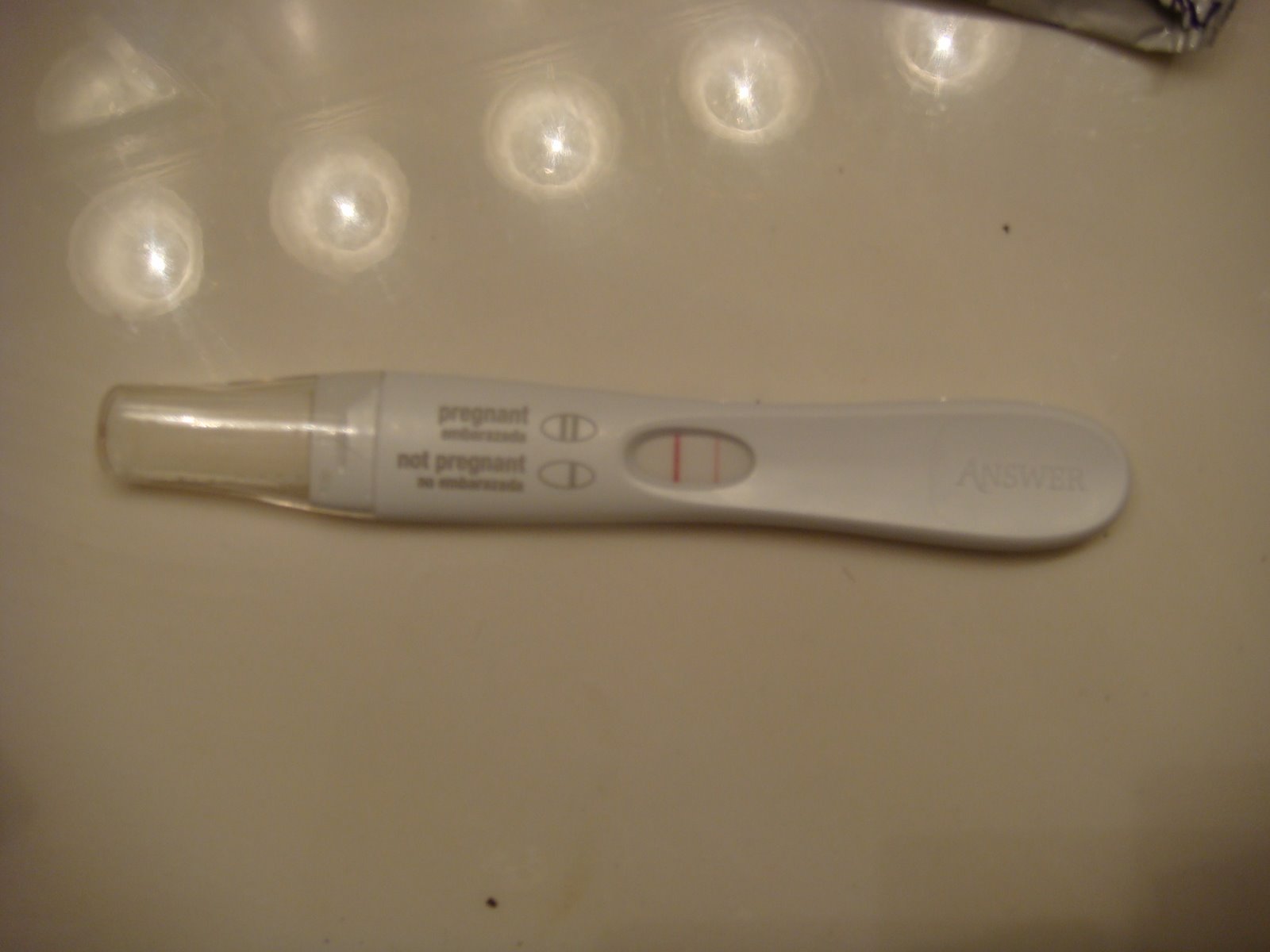 We of course take another one just to make sure and YUP we are officially going to be parents!!! Being so excited I call the Dr. but they don’t even say congrats! They book me an appointment for a WEEK later so I spend the day researching everything I can! 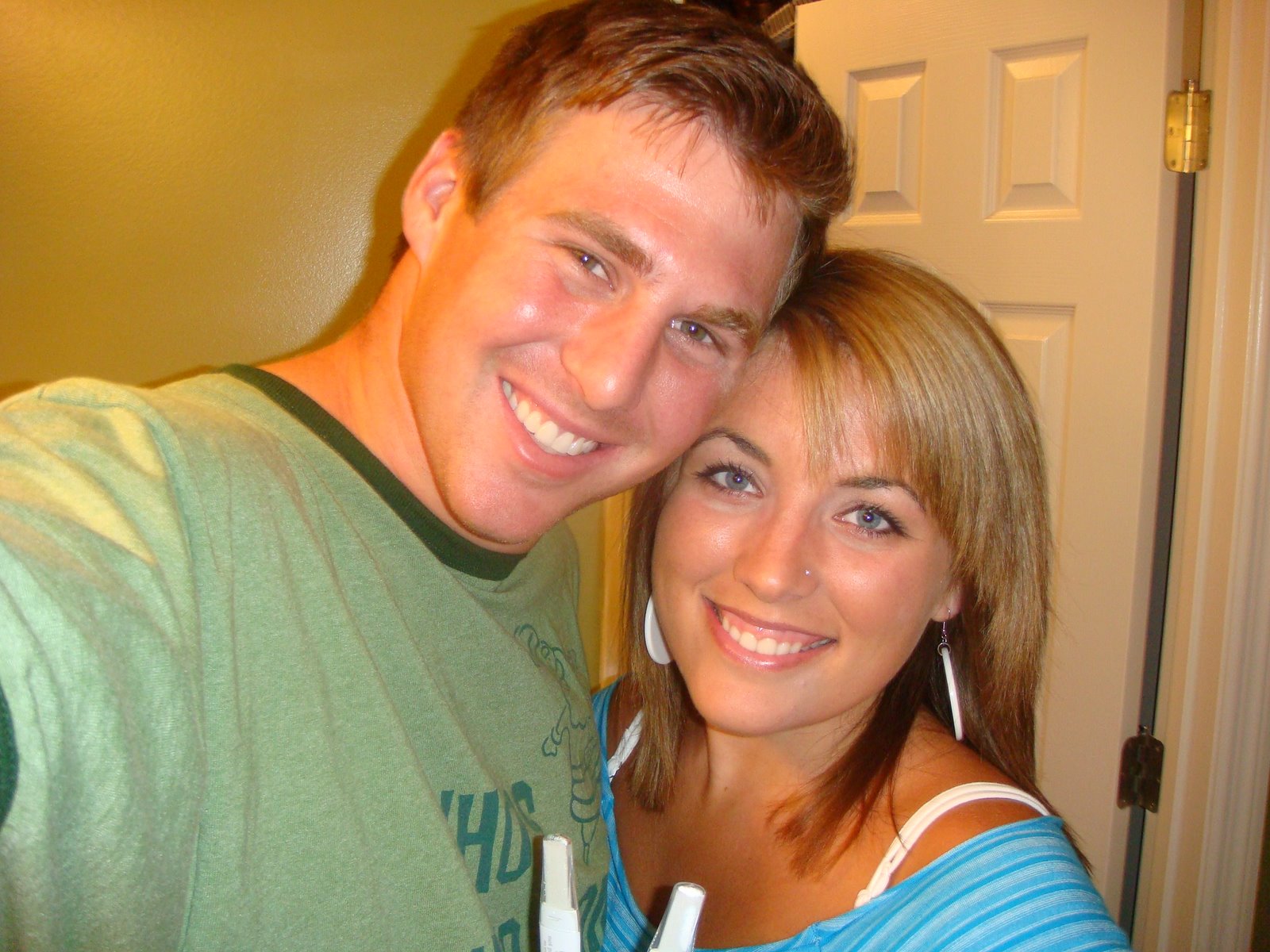 Zach is so excited but also nervous about the kind of daddy he will be and the money it will all cost! Being the sweet husband he is he brings home flowers for me after work…so pretty!! 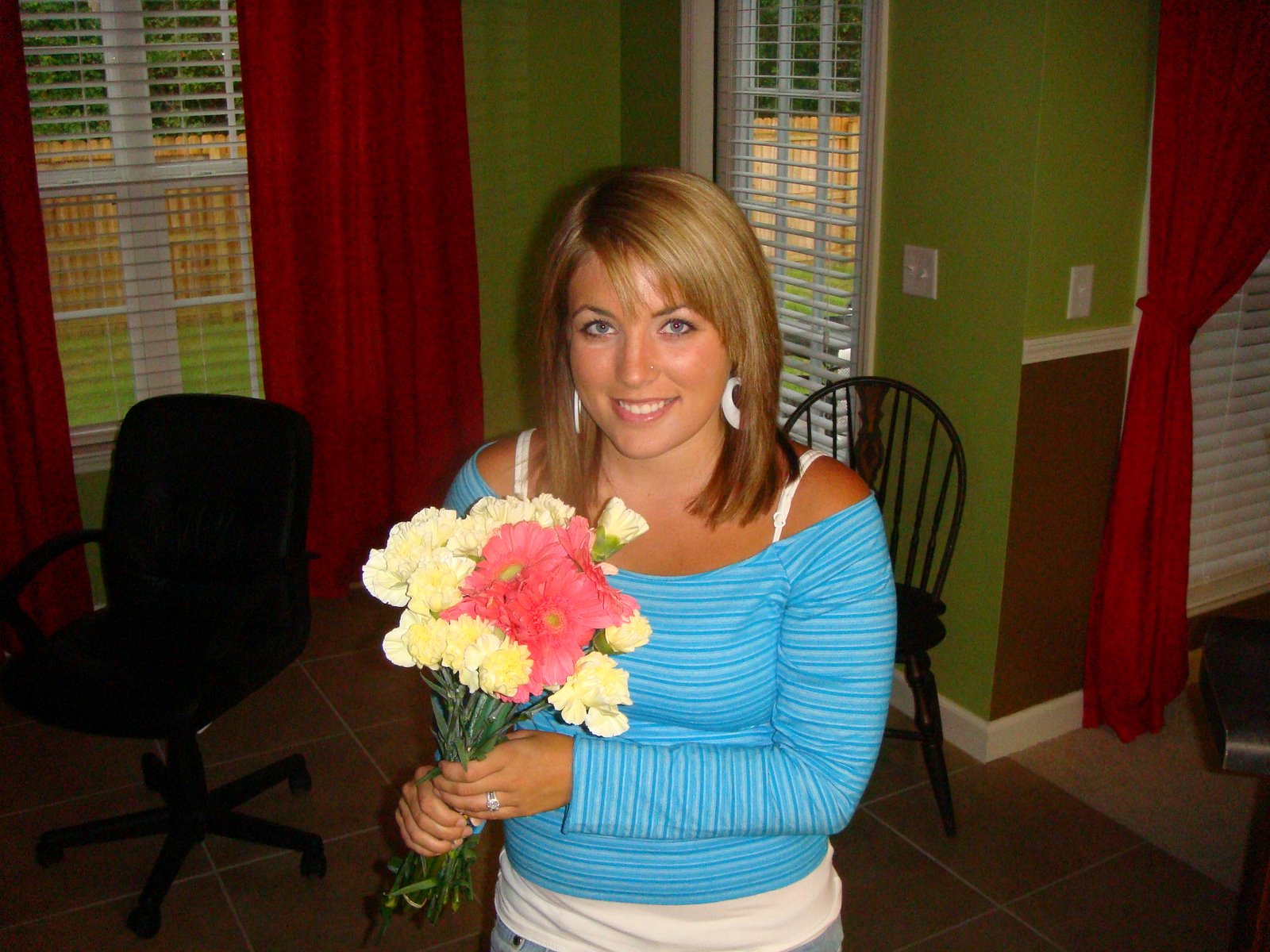 Zach and I have been planning all of this for a looong time now but we didn’t want to tell anyone because we knew if people knew we were trying that they would put more pressure on us by asking a lot of quesitons and neither of us thought it would help our chances of getting pregnant! Also we agreed that once we were pregnant that we wouldn’t tell anyone until after the first 12 weeks!

Well Ashley gets home from Ukraine and is suspicious…since my boobs have gotten bigger and I am so sleepy so quickly! Also the night of the 17th Katie, Ashley, Zach and I all have a big dinner at our house to officially welcome Ashley home from Ukraine. Of course Katie made her famous Greek Salad and I can’t even eat any (me being the researcher I am immediatly find out what I can and can’t eat…and sadly no feta allowed). So Zach and I talk about it and decide to go ahead and tell them. JUST THEM as we know we can trust them and plus they both are so close to me they’d figure it out eventually if we didn’t tell them!

After Zach says the prayer at dinner I just blurt out “I’m Pregnant.” I don’t think anyone eats anything b/c we are all too in shock! Ashley is so surprised and a little mad at me for lying to her for so long and Katie is the first one to say “I knew it!” She said she can tell b/c of how big my boobs look in the dress I am wearing! ha! 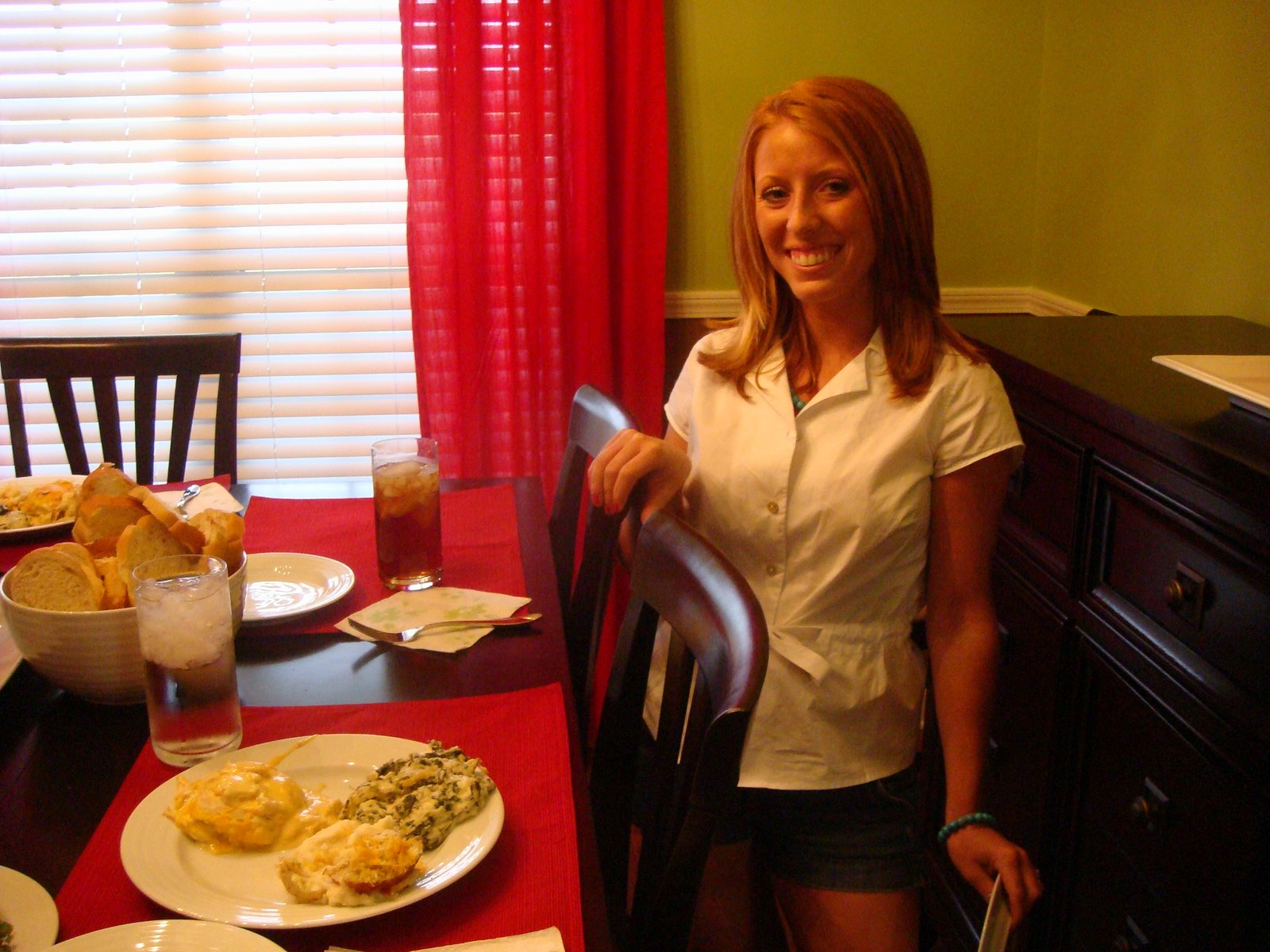 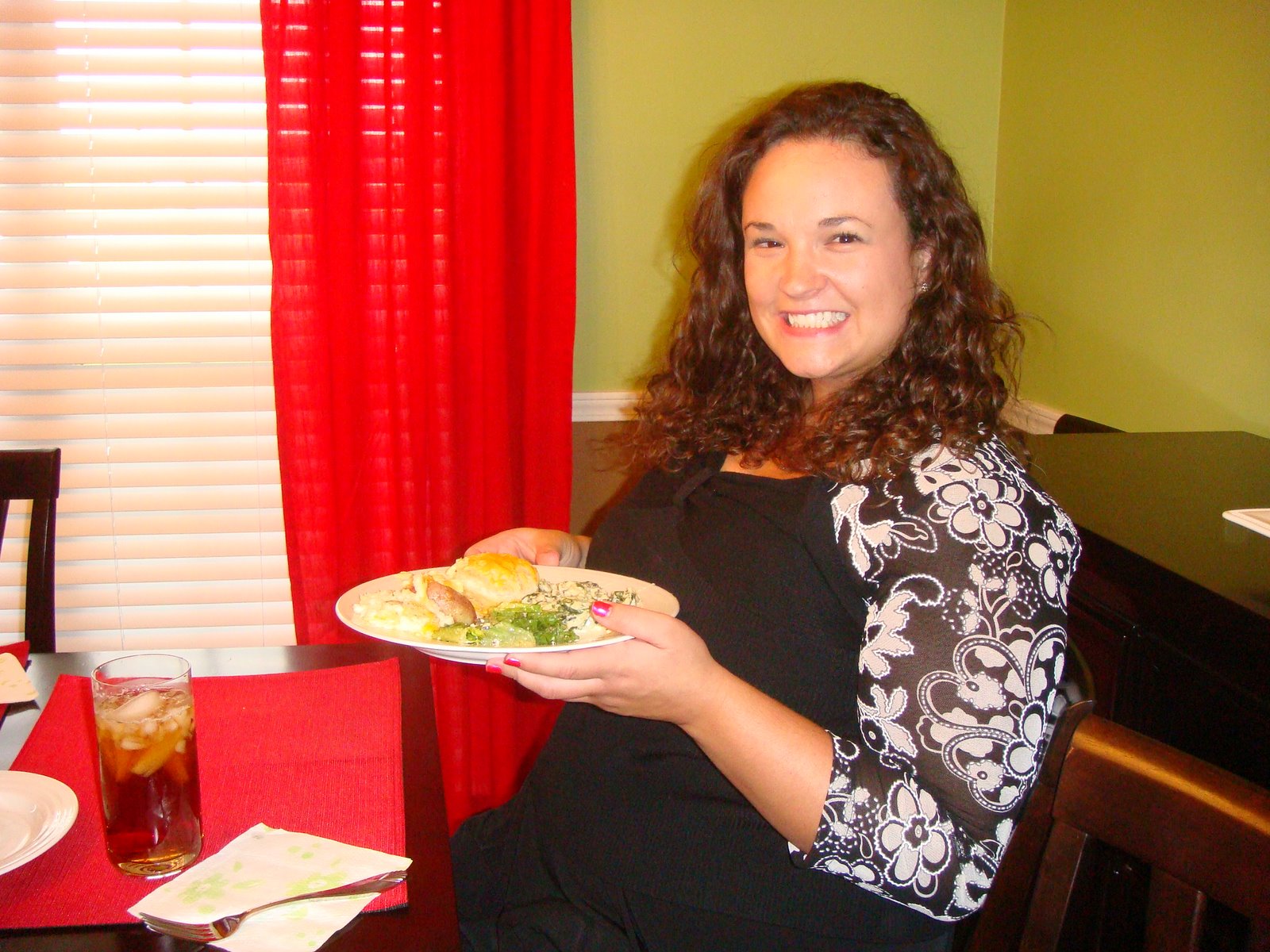 Meet with my Dr. and she confirms my due date as March 21st! Pretty exciting! Especially the fact that I won’t have to go through the heat of a Valdosta Summer with a HUGE belly!!! She does an exam and everything looks great! We head to North Carolina for our first free Aflac vacation! 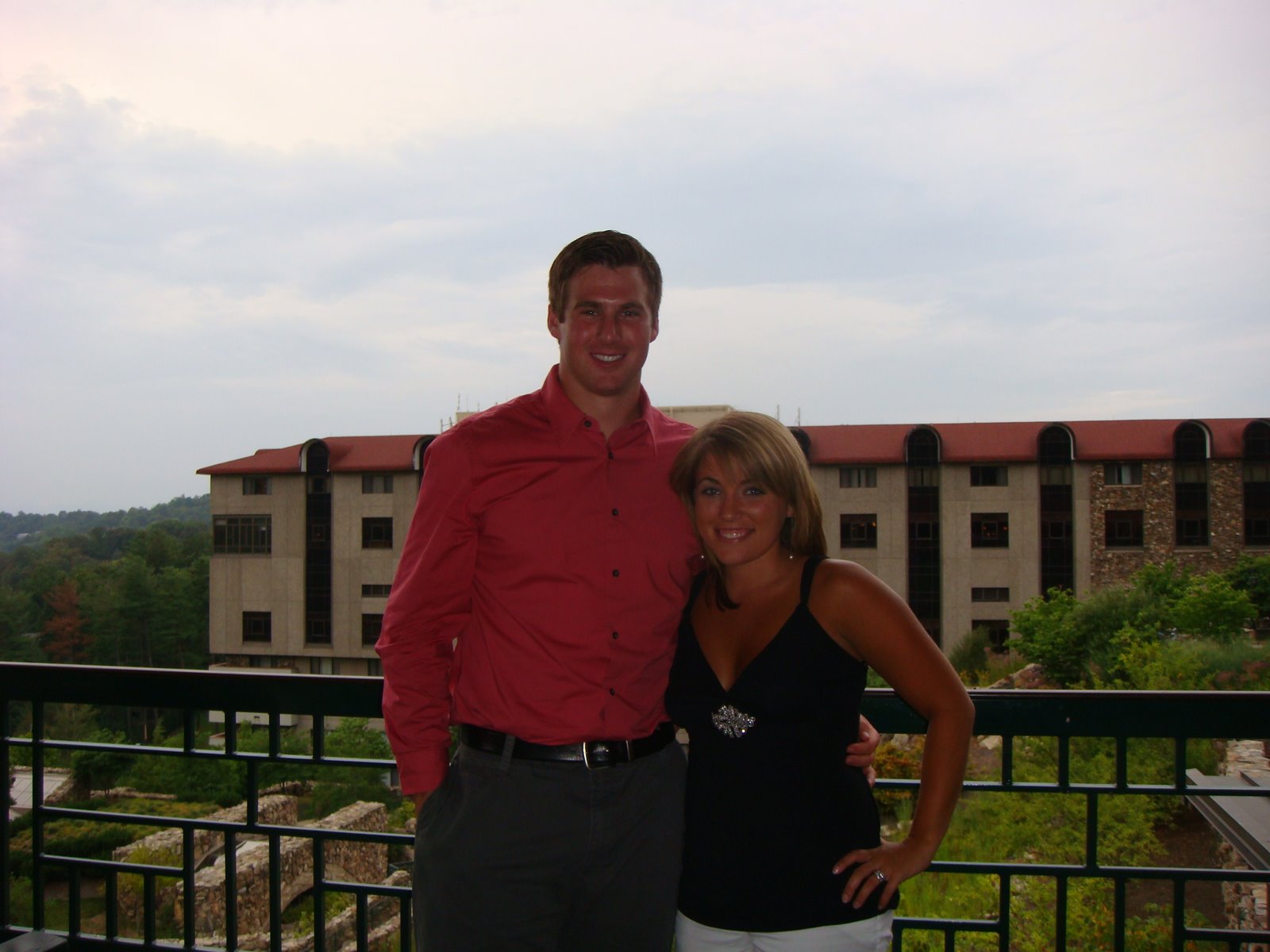 Ashley’s mom comes to town and after spending the afternoon eating lunch with them and doing a little shopping she tells Ashley that she thinks I’m pregnant! I start worrying that people are going to be able to tell…I mean my clothes already aren’t fitting the way they used to and I hate the fact that people probably think I have gained weight!

So Zach and I talk about it and decide that it really works out perfectly. My mom will be visiting Brandon and Chrissy in Gainesville so we can drive down there on Saturday and all the Parkers will be together on Sunday after church for Zach’s birthday so we can tell them then!

Zach’s birthday! Since it’s his first without football I want to make it special so I wrap all his gifts in paper bags and write on each one little life lessons that he will teach our baby. I even buy him our first piece of baby clothes…a onesie that says “I am the apple of my daddy’s eye” 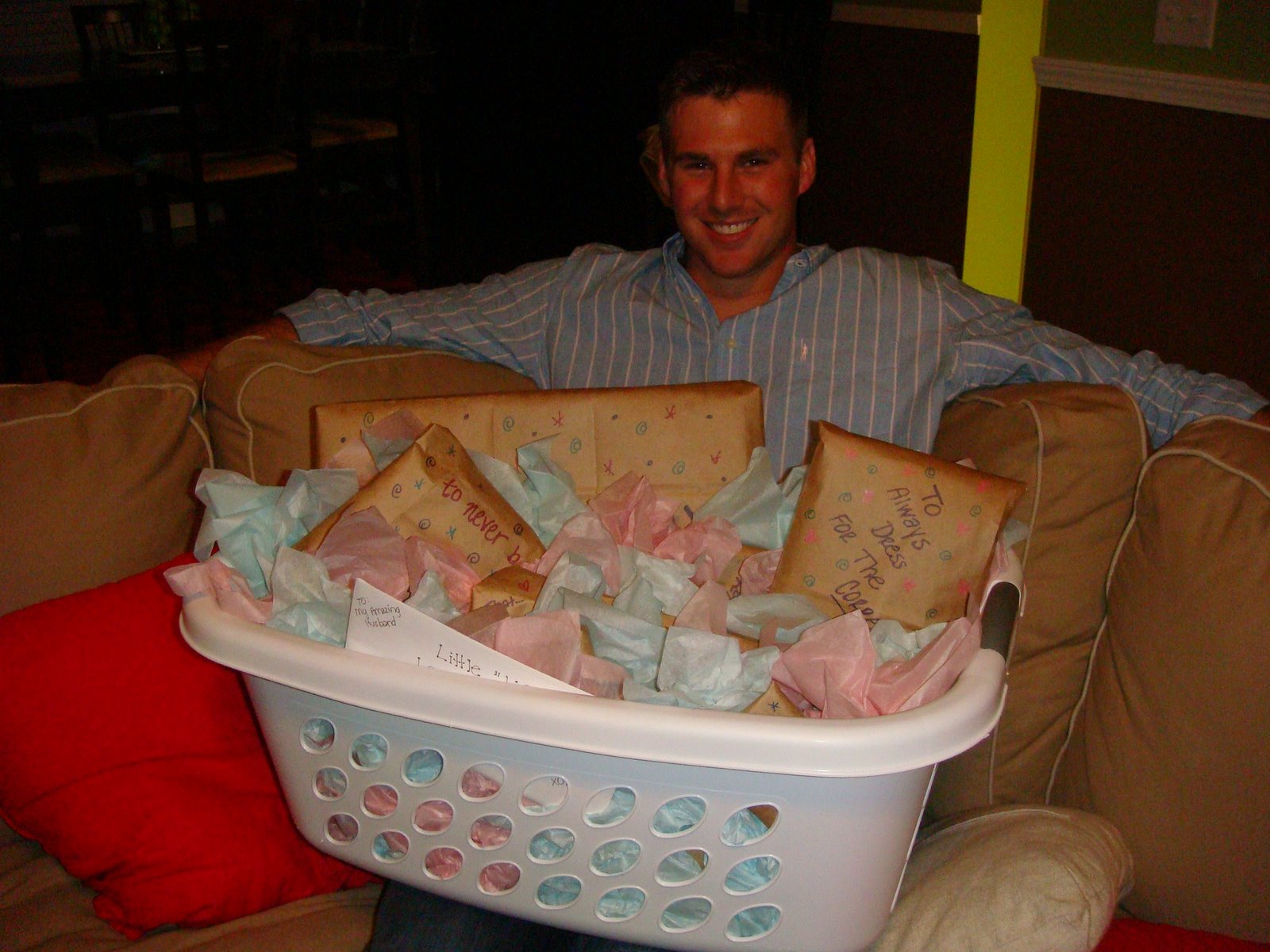 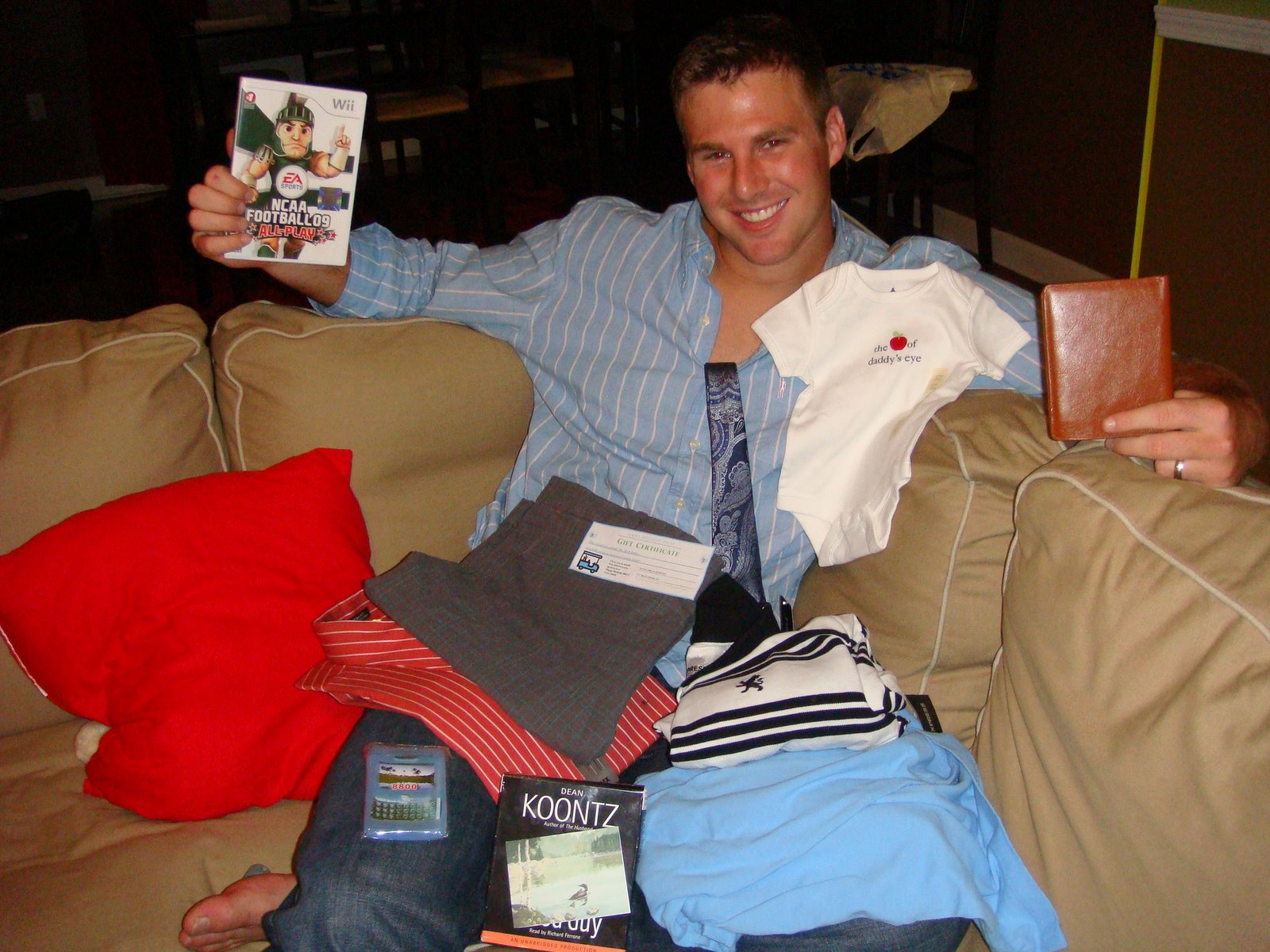 Zach and I head down to Gainesville! We meet at Brandon and Chrissy’s new apartment and it’s adorable, of course! Then we all go eat at an awesome restaurant called Dragonfly. It is so neat with all appetizer size portions! 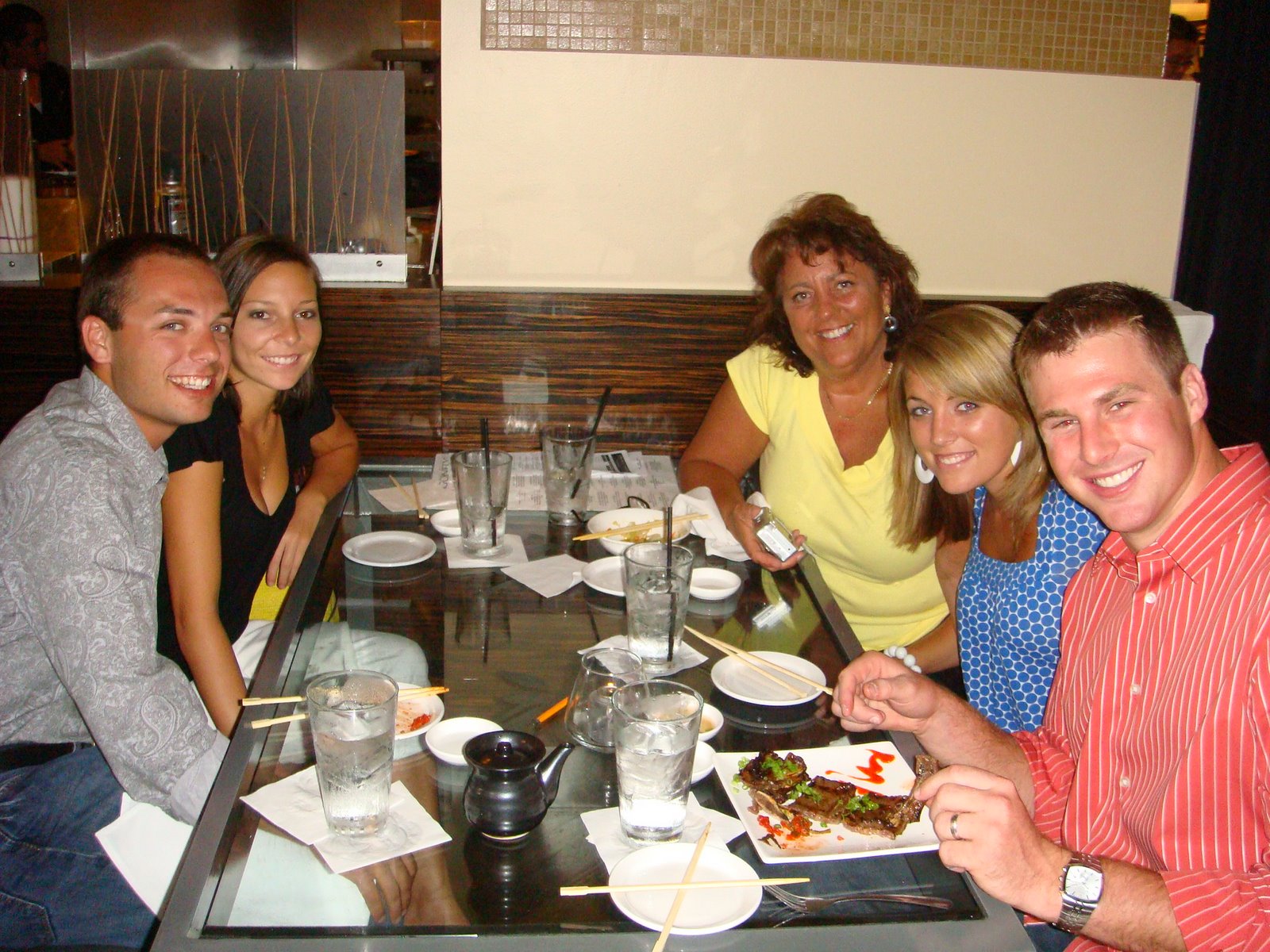 While waiting for our desserts I pull out a little Pandora gift box and hand it to Mom. I tell her that I know she’s been having a tough time lately with Nana being sick and that Zach and I wanted to get her something that we know will make her happy everytime she looks at it.

The moment watching her open it goes in slow motion…Zach says he was so nervous as well! As soon as I can see the little silver baby basket charm I say “you’re going to be a grandma.” 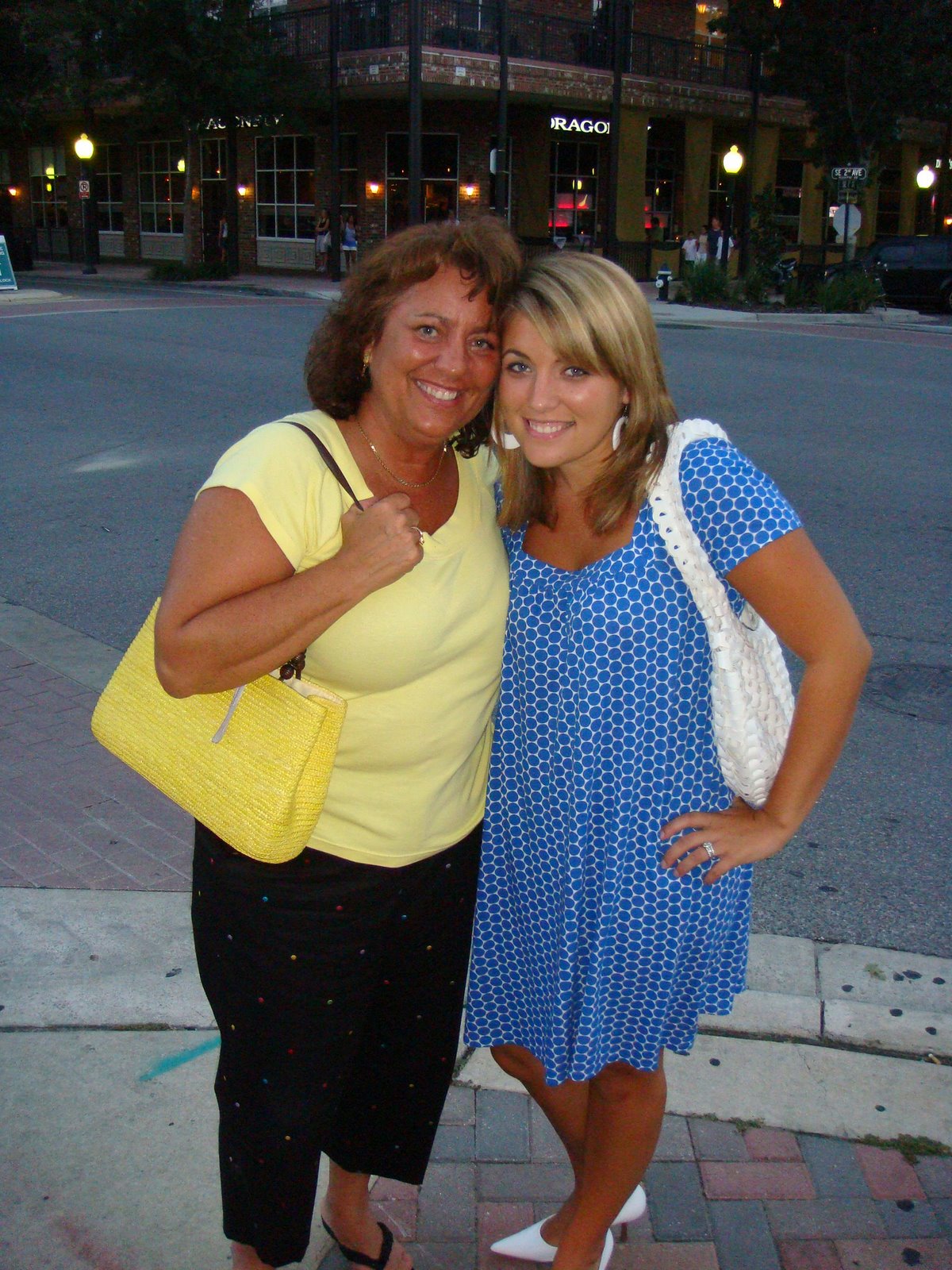 It is one of the most precious moments I’ve ever experienced! She looks so happy and surprised. She stands up then cries and hugs me. Chrissy, who isn’t even a huge baby person, has her hands clasped over her mouth with tears in her eyes and Brandon either couldn’t hear (over the crazzzzy beats) or was in too much shock so I turned to him and said “you’re going to be an uncle too.” Then his face lights up in excitement. 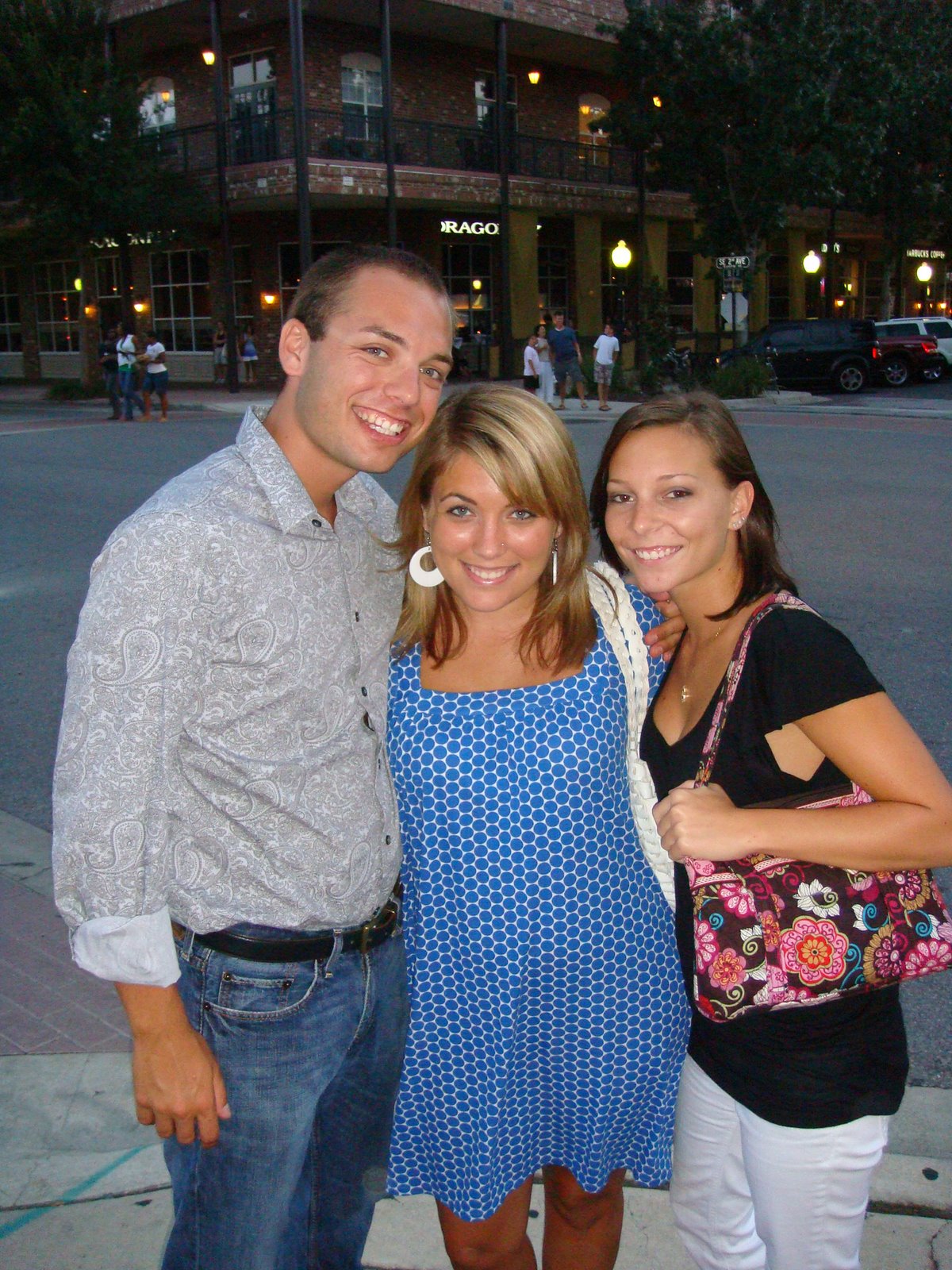 It means so much to me that I got to tell my family in person and I love my husband for being the type of man willing to drive 3 hours in one day just to eat dinner!

On the way home we call my dad and I am really impressed with his reaction as well. He is so happy for us and wanted to hear all the details! He kept saying Brandon would be our baby’s cousin haha We talk for over 20 minutes about it and it really touches me to hear the excitment and pride in his voice…

A day I’ll never forget for sure! And tomorrow we have all the Parker’s to tell!!!

Today we went over to The Parker’s to celebrate Zach’s birthday. It is the perfect opportunity to tell them as Little Mama, Big Daddy, and Mema are all there too! Zach is soo nervous and practiced what he was going to say over and over! We get there and Zach decides that it is a GREAT time to tell his mom about him stabbing his hand and needing stitches…so she is all mad at us for not telling her sooner (it happened like a month ago)! I keep thinking that at least our news will put her in a better mood and make her forget the hand haha

After Zach blesses the food he says he just wants to thank everyone for getting together for his birthday, that he loves when we all get together, and that in 7 months we’ll be adding a new member to the family! NO ONE catches on haha so I say “I’m 8 weeks pregnant.” And THEN they get it!

Courtney realizes what is going on first so she runs over to us and hugs us both which is so sweet of her. I know she’s probably one of the most excited ones because we’ll get to share our experiences together! She’s already volunteered for me to borrow her body pillow and I’m pumped for that!

Everyone else is excited as well…there are some tears from Little Mama and Mrs. Charlotte. And Brad starts eating! haha I know it means a lot to Zach that we told them and we ask everyone to keep it quiet for one week so we can announce it at the CSC and at church next Sunday! 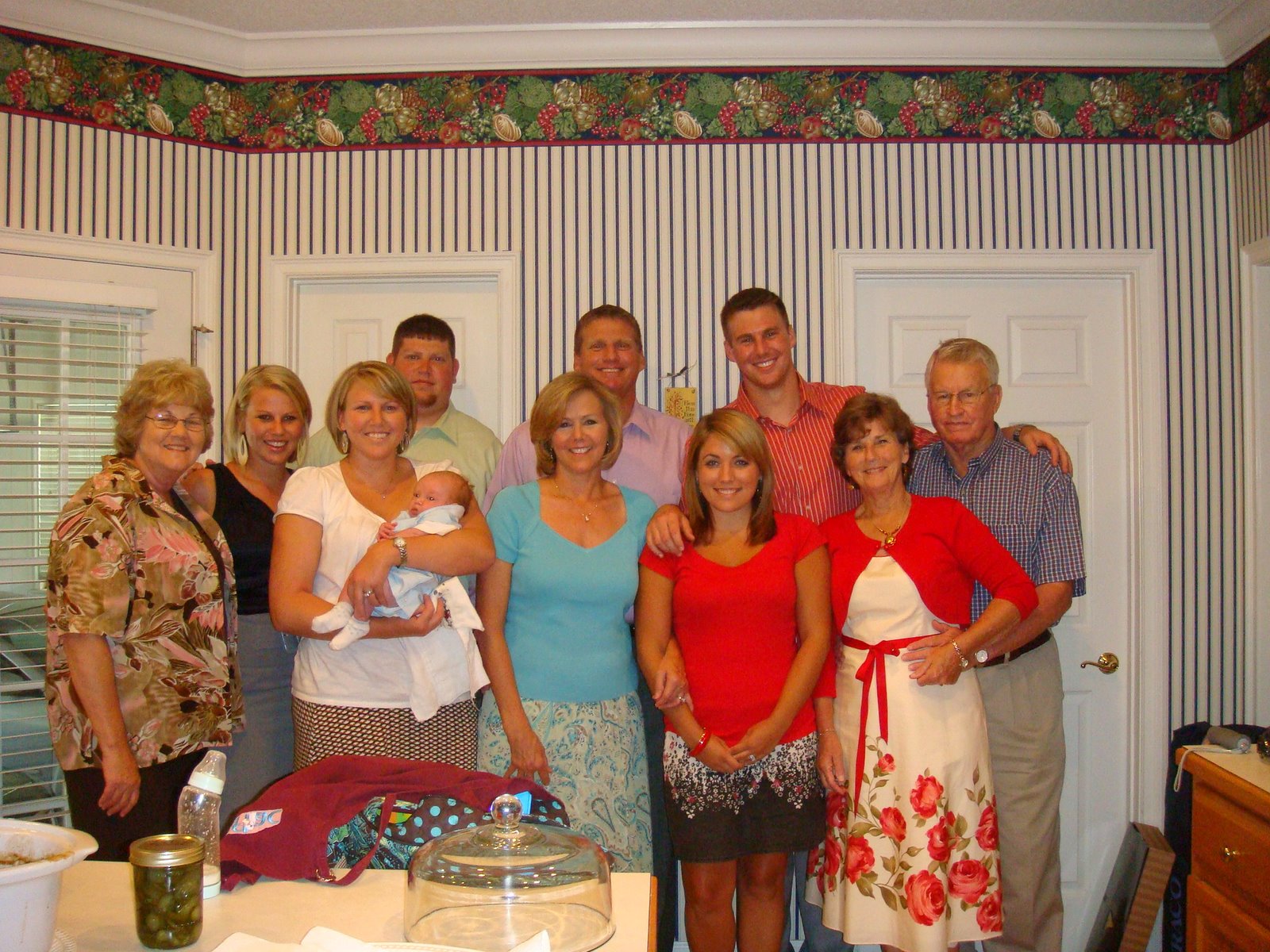 Mom called today and told Nana and she said Nana cried which is so sweet! I later get a phone call from ALL my family yelling “Congratulations!!!” It is so awesome that I have such a loving family who I know are all excited for us! Now that Aiden is getting older I know they all think we need another little one 🙂

On the way home from the Parker’s I call and tell Danielle who is of course over-joyed. I also tell Jonathan and told Deidra. I’m the matron of honor in her wedding in May which is not long after we’ll have the baby and it’s so sweet of her to still allow me to be in the wedding! I’ll be a fatty bridesmaid for sure haha But it will be the first road trip for the baby which will be neat!

I also left messages for my Uncle Spear, Aunt Cheryl and Aunt Donna so I’m sure that will be a nice treat when they get home! Now we just have to tell Seth and Crissy tomorrow night, the CSC, and church and we can put it online to tell everyone else! I’m excited for the news to be out there so people can stop thinking I’ve gotten chunky and think I’m a cute pregant girl instead 🙂