When you have a new baby you go to the hospital about two days after you get home to have them checked and then about two weeks later you take them to the pediatrician to be checked. With Brittlynn, we ended up going when she was 8 days old. We had an appointment set for when she was two weeks, but I called up there to ask about her tongue (post to come on ALL of that story) and they wanted to go ahead and see her. They said if she checked out fine then they’d go ahead and count it as her well visit too. Sounded great to me, but the only downside was that Zach had a group he had to work. It was one that he had rescheduled when she was born and the last thing you want to do is reschedule on someone twice. Kye had school (Mrs. Charlotte picked him up for me) and Mom was able to come with us! It worked out well and Zach will for sure be there at her next appointment!

Our appointment (on 12/14) was an early one, 8:45. We got there early though as I left the house as soon as she was done eating. At that point she was falling into a semi-routine and would eat three hours after she first ate. She ate that morning at 7:15ish so she’d be hungry again around 10ish and probably even sooner since she wasn’t sleeping in her bed. Thankfully, she sleeps okay in the car seat and had fallen asleep by the time we got to the dr office! 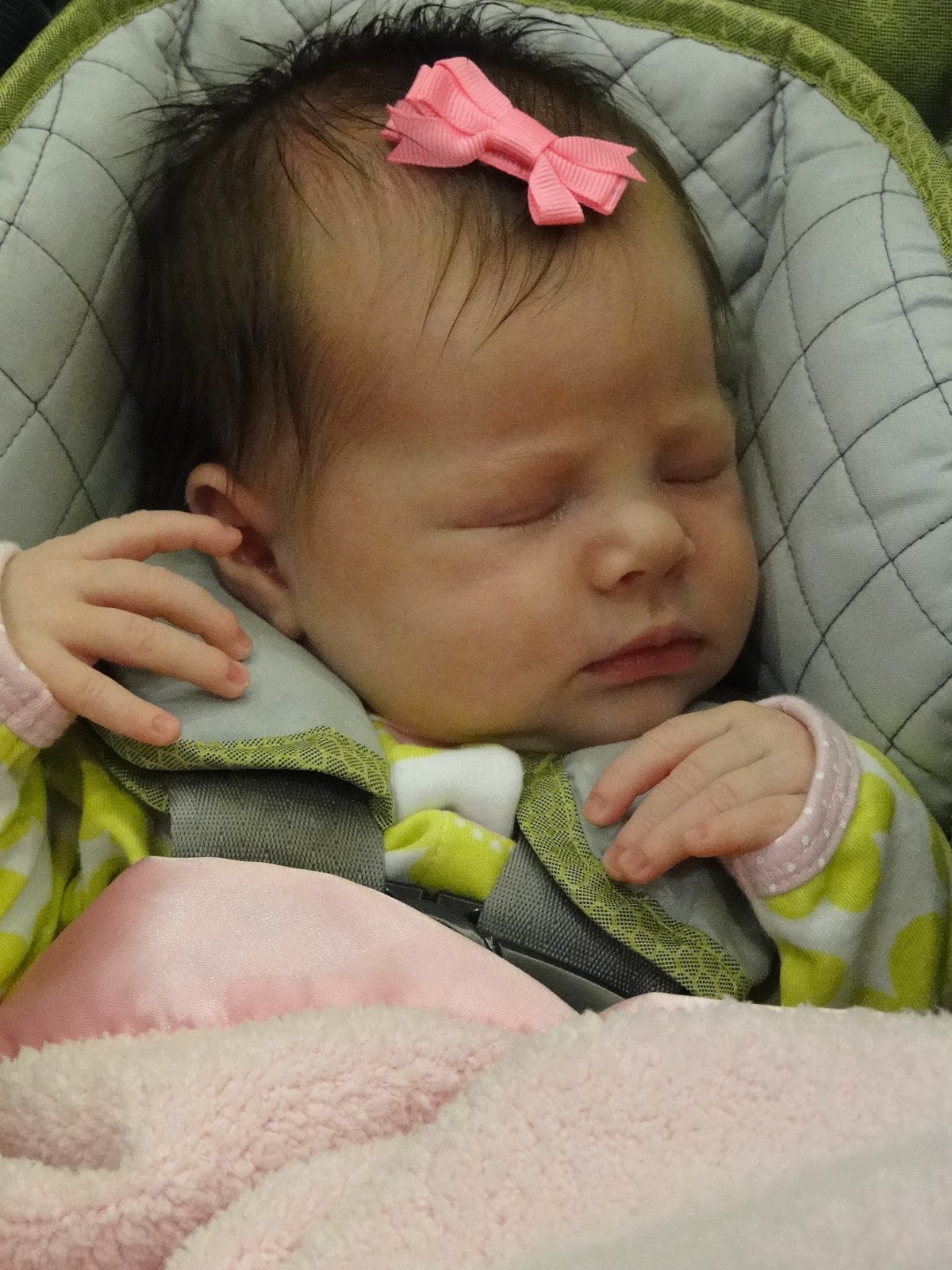 A first timer would have had her dressed up super cute…but I knew better. She’d be stripping down anyway so I just put her in a sleeper for the event 🙂 It took them FOREVER to get us back. Super annoying. We waited in two different areas until we finally got a room. The nurse came back and did her stats.

At birth she was 20 1/2 inches long, yet at her dr visit she was 21 inches long! There is NO physical way she grew 1/2 an inch in eight days! I told the nurse this so we double checked and, yup, 21 inches. She said that usually the hospital doesn’t do it as accurately. Which makes more sense because Kye was 20 3/4 inches long at birth and could wear his newborn sized sleepers with no issue, yet Brittlynn was too long for them at birth! 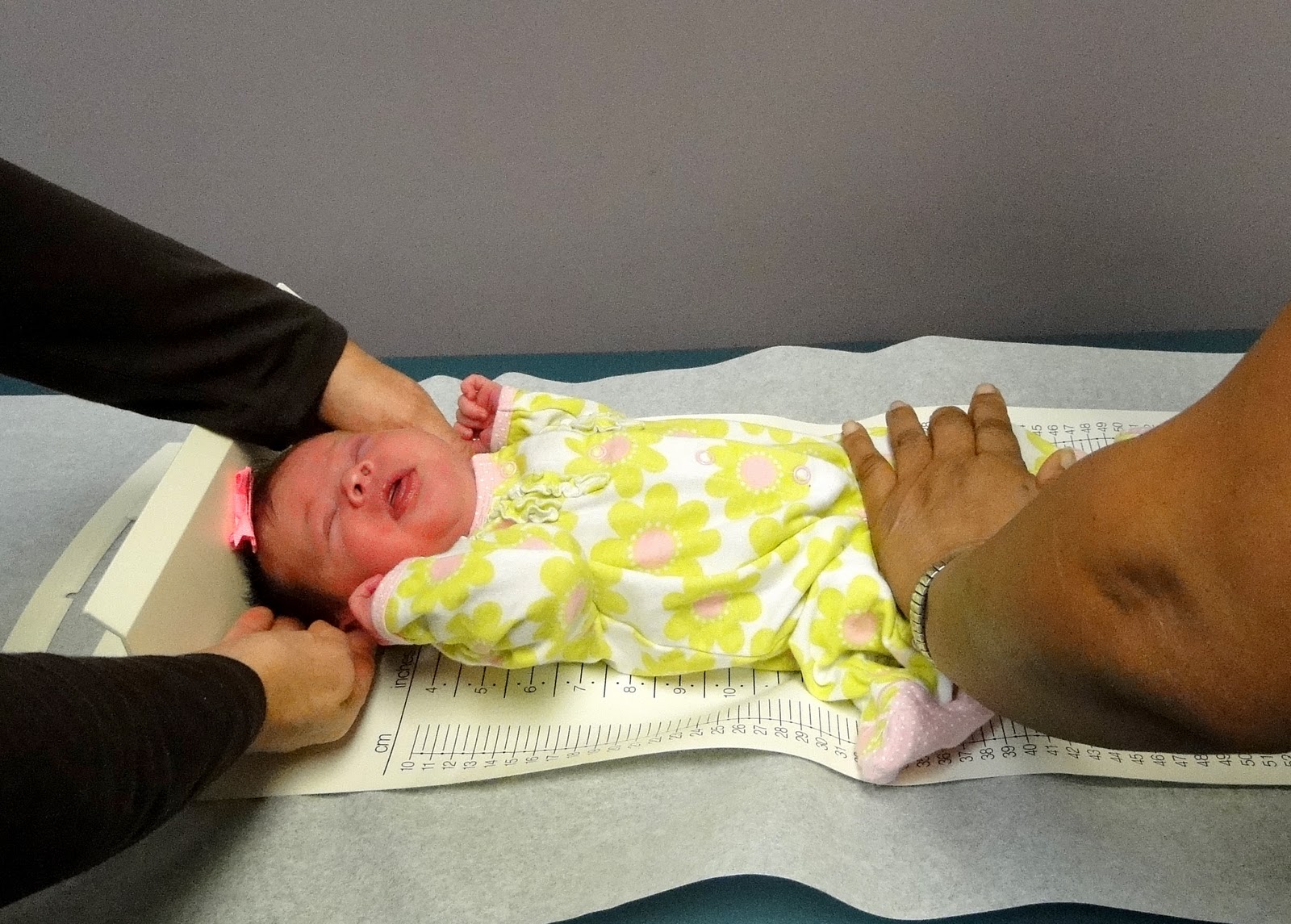 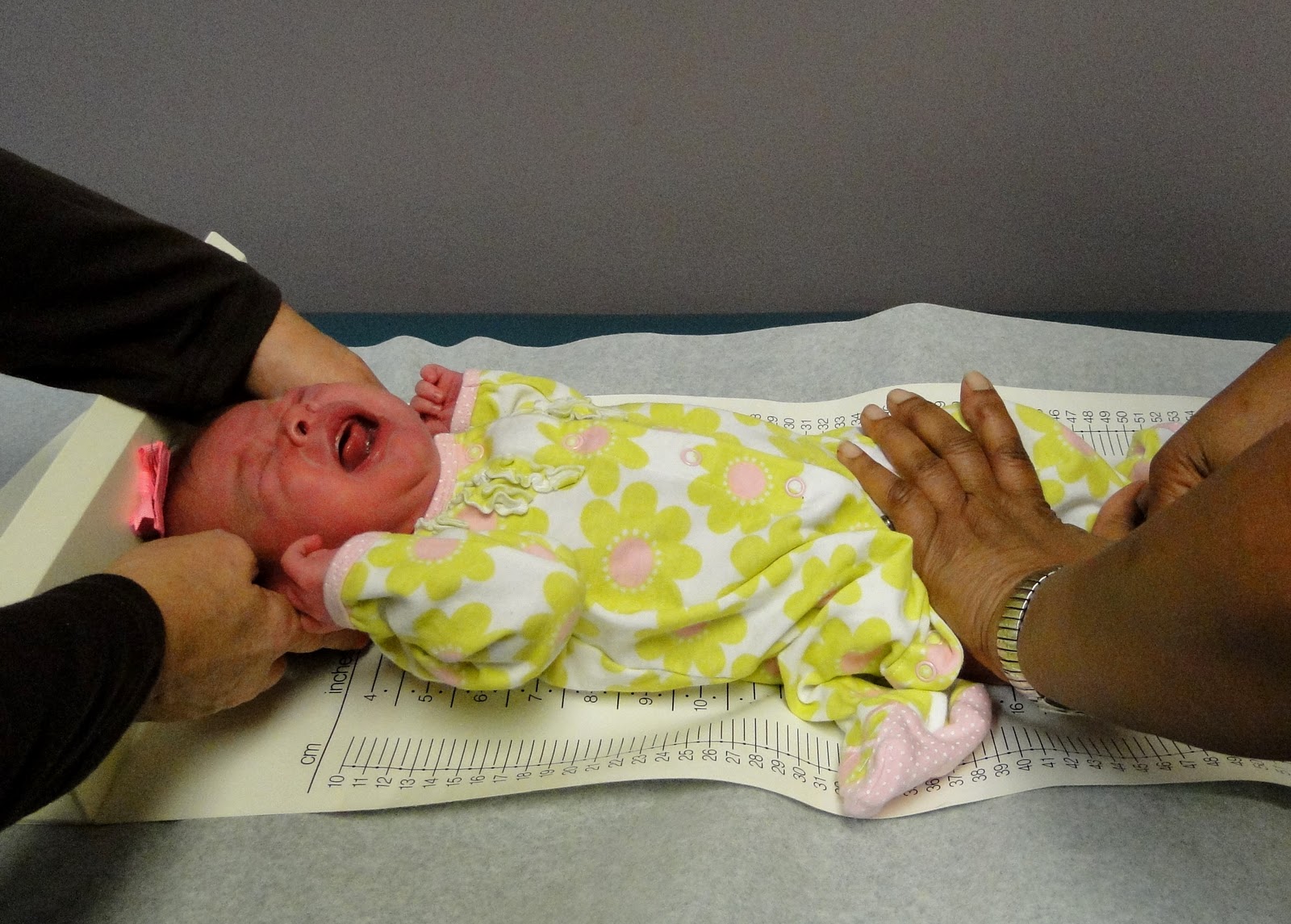 Gramma cuddles before getting weighed 🙂 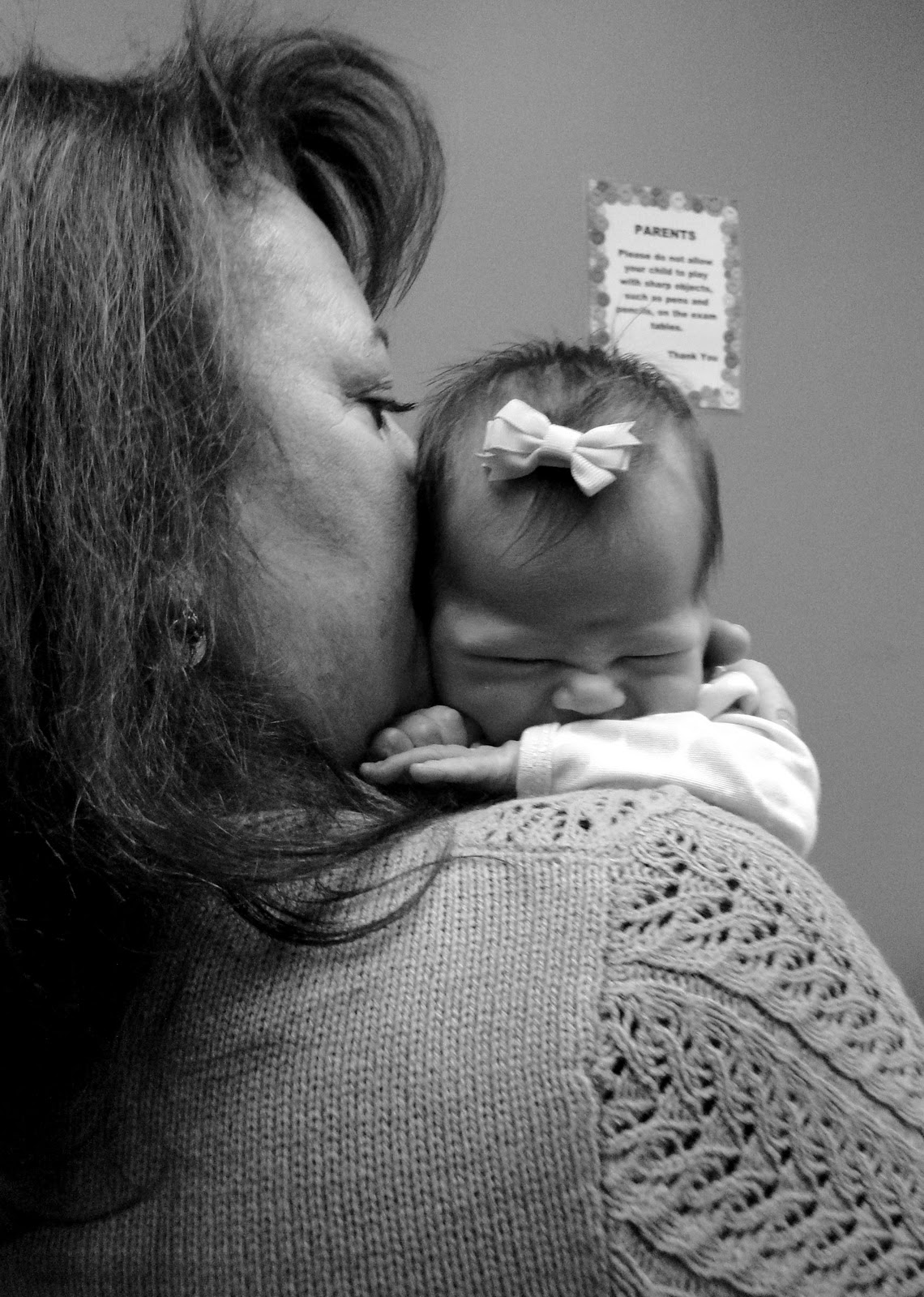 At birth she weighed 7lb 13 oz. When we left the hospital 2 days later she lost 5 oz and weighed 7lb 6oz. When we revisited the hospital for her two day check, when she was 4 days old, she had gained back 5 oz and weighed 7lb 11oz. Four days later, when she was 8 days old, at her dr visit she had gained another 9 ounces and weighed 8lb 4oz!!!! Isn’t that crazy?!?!  Also her head circumference measured at 13 1/2 (it measured 13 inches even at the hospital and I’m going to stick with that b/c we could tell the girl did not have that thing tight enough around her head at the dr office) 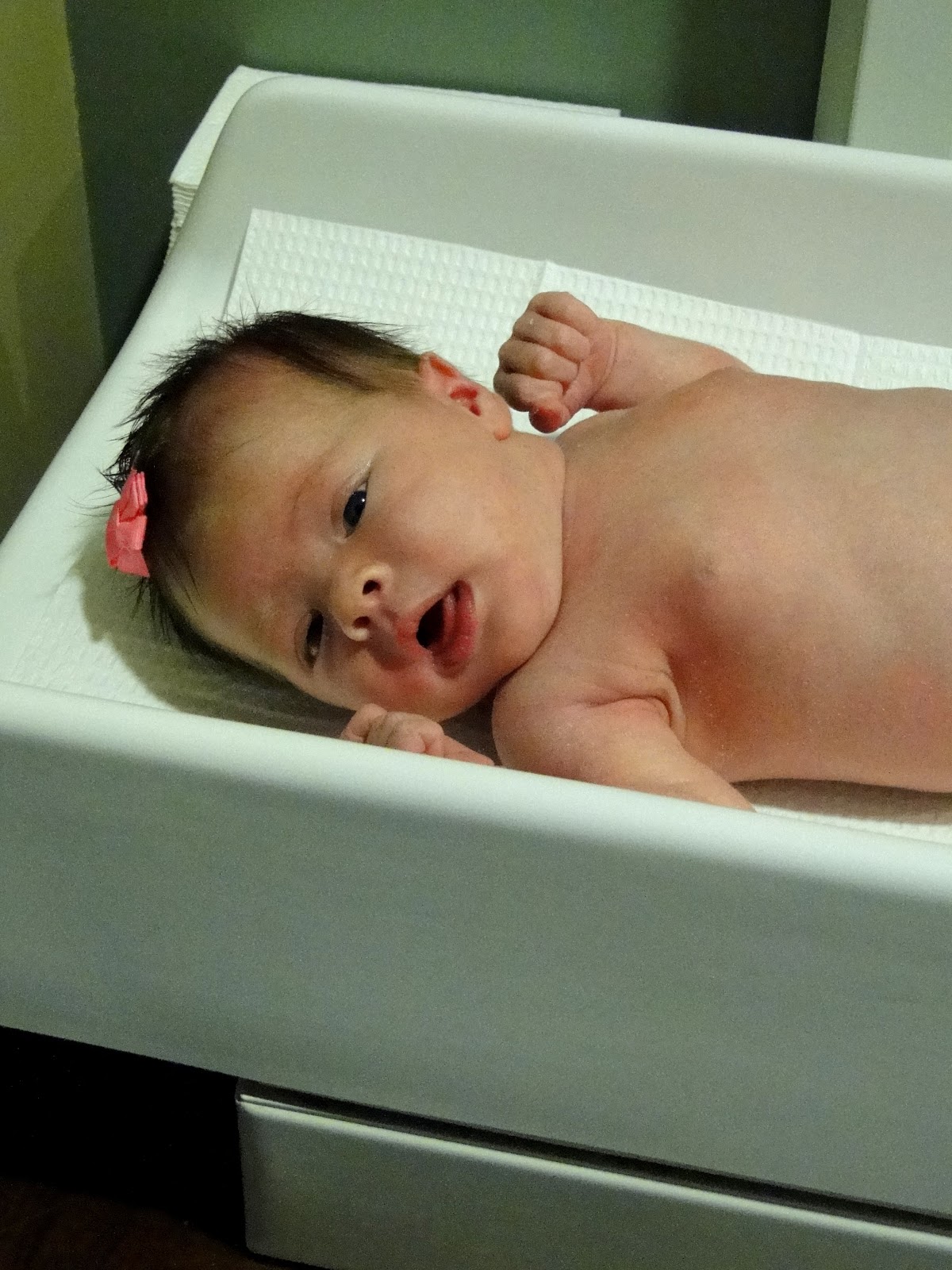 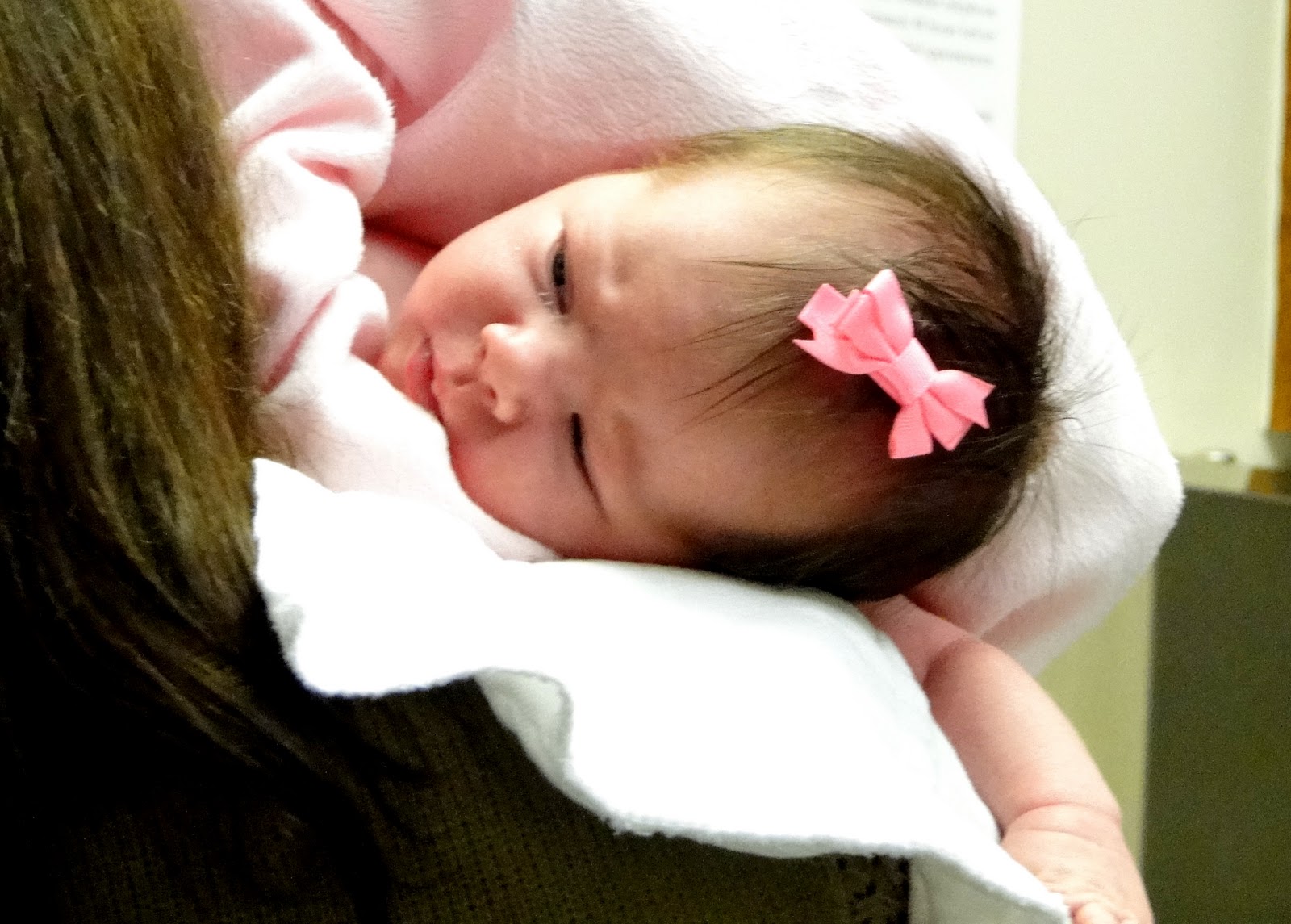 Since it was Britt’s first time at the office, we got to see Dr. Griner. I saw him at the hospital too and I think it’s nice that he always sees people for their first visit. However, he had JUST gotten back from paternity leave and we waited for what felt like years. I ended up having to nurse her while we waited. With Kye, that would have been impossible. I couldn’t nurse just anywhere…I had all kinds of issues. But with her I just sat in the chair and used a pillow off the dr table and she went to town! I had a hooter hider with me and covered up when Dr. Griner came in (I knew he’d show up when I was nursing!). I got all my questions asked and answered while we waited for her to take a break then during the break he did her exam. It went pretty smoothly!

Here are the questions I asked and answers I got:

This is actually a posed picture, he’s such a sweet dr! He got done then I got my camera out and he said “want me to check again for the picture?” 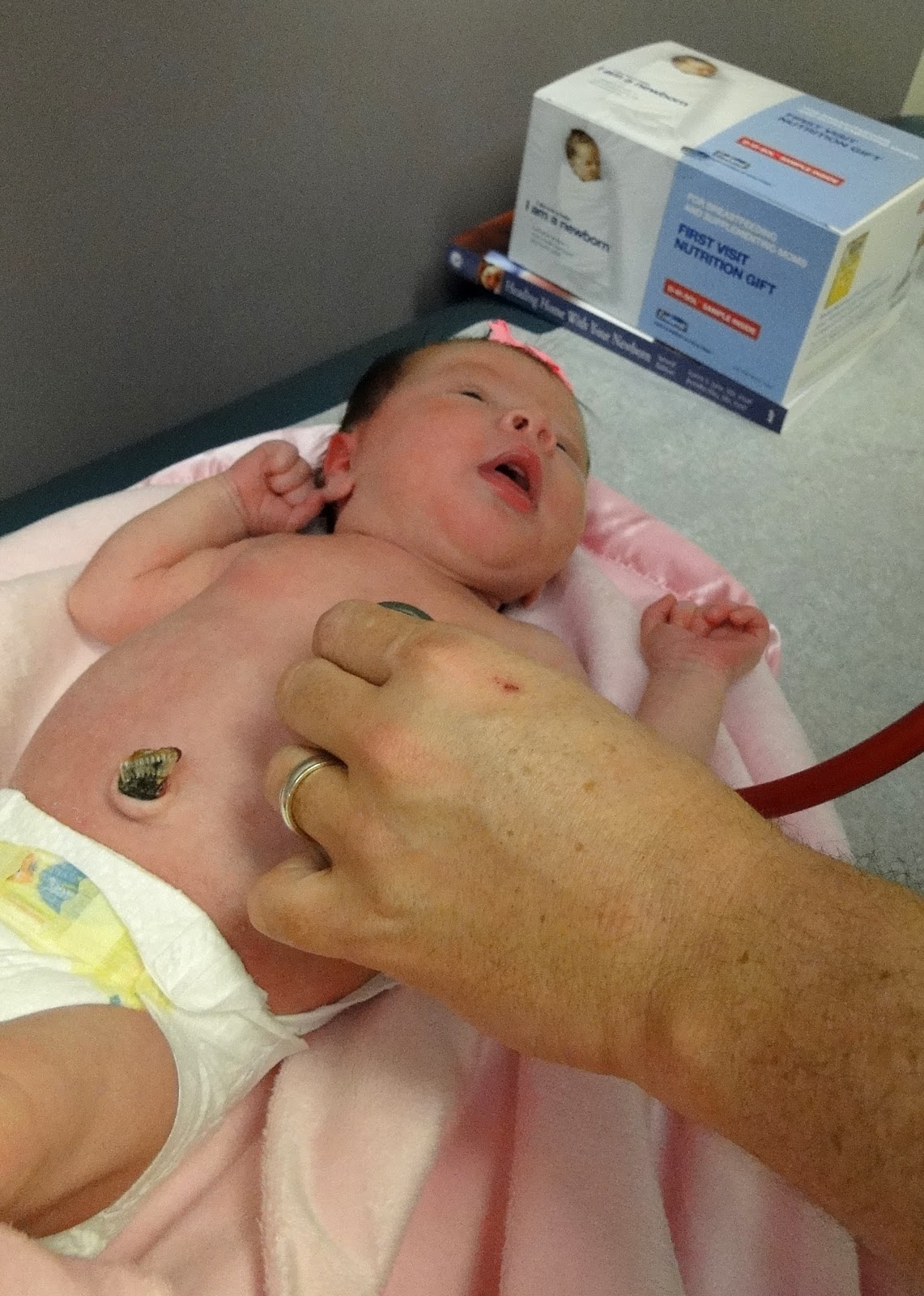 When he did her check he couldn’t get over her weight gain. He said it was unbelievable for a breastfed baby to gain that much that quickly!!! Made me proud 🙂 I personally think her health has to do with letting the cord stop pulsing before cutting it at birth – all that extra blood is supposed to make them healthier and I think it worked! He said she looked perfect everywhere, and commented on how great her ears looked (my kids just have great ears, so random). He also told me that they have changed the recommendations for the umbilical cord. I told him that it was bloody kinda often and would leave little blood spots on her clothes. He said that was normal but that instead of using alcohol wipes every diaper change that we should only use them twice a day.

The visit went great and Dr Griner said she looked perfect and healthy and that we didn’t need to worry about coming back until the end of Feb for her first round of shots!!! Am I not so blessed to have such a healthy little girl??? Trust me, I thank the Lord constantly!!!

After he left she was mega fussy since she didn’t get to finish her feeding so I nursed her some more. We held up that room for awhile but I didn’t really feel too bad about it. I mean they made us wait forever and because of that my kid had to eat!!! When she took another break we left and I nursed her again a little while later. 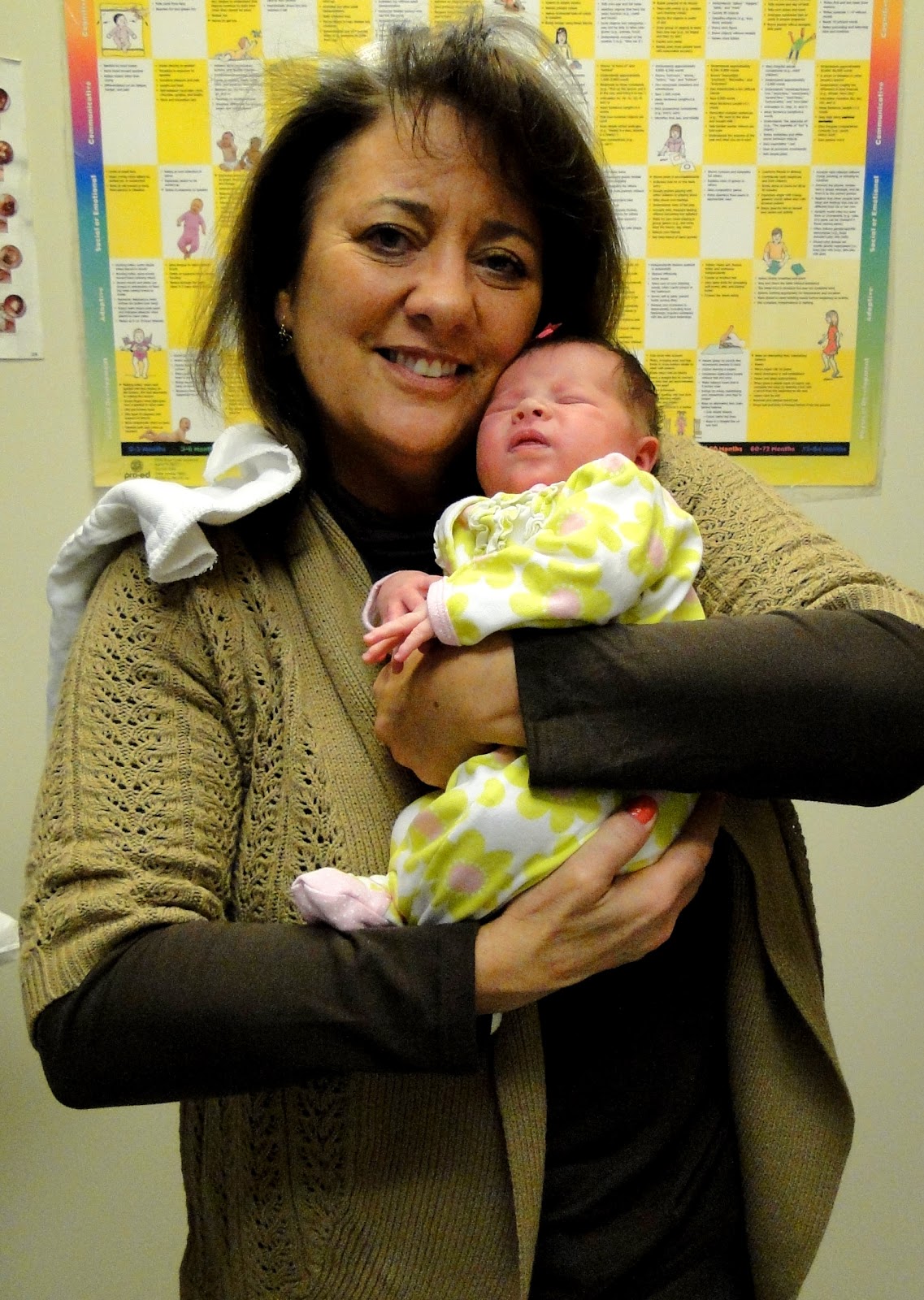 Proud of my girl! 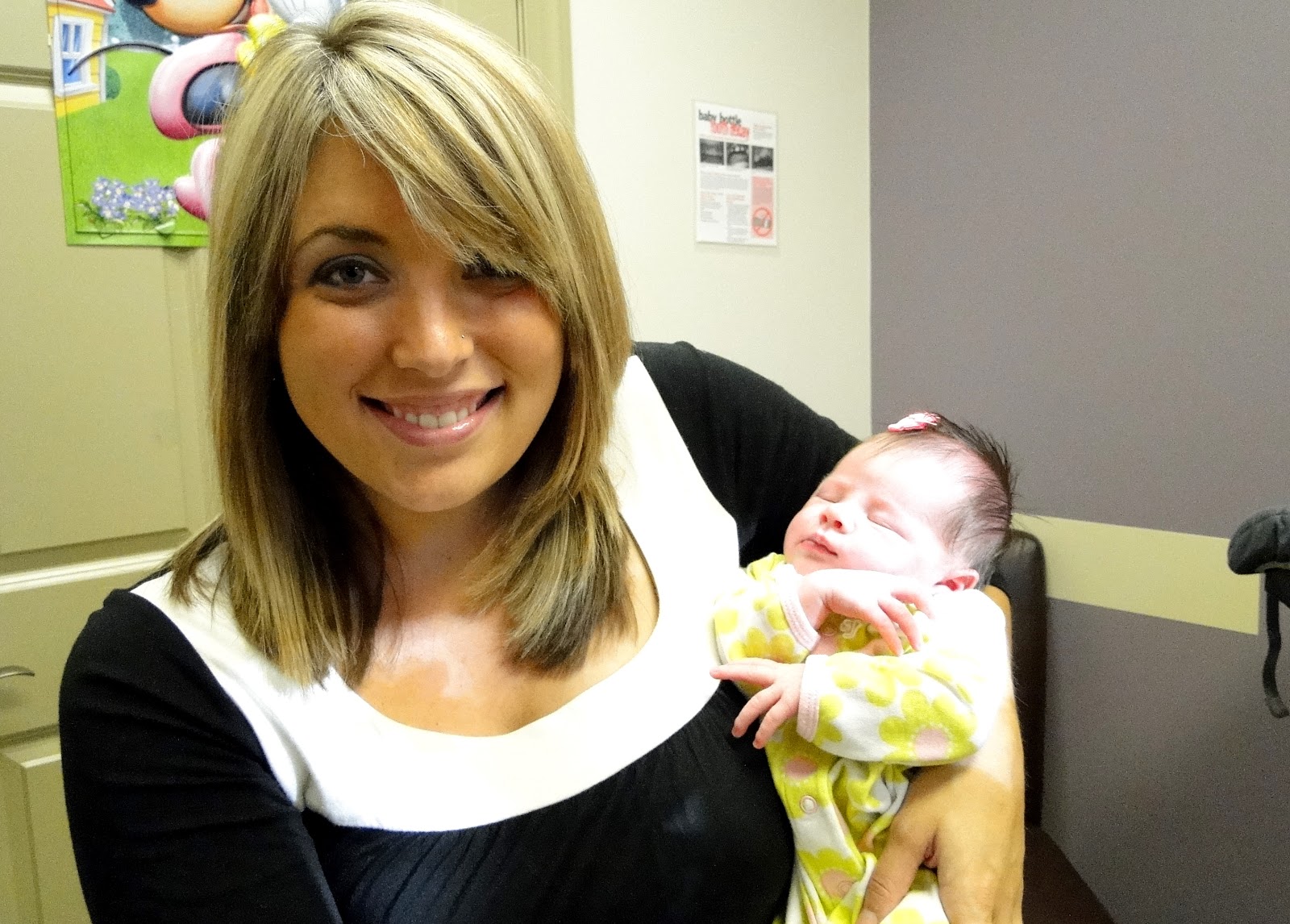 It is SUCH a great feeling to hear the dr tell you that your baby is healthy. Especially this early in the game…it makes it easier to put her on a schedule and things when I know she’s growing like she should and getting enough to eat. There isn’t as much guilt involved or any worry that she’s hungry when she cries. I KNEW Zach would be mega pumped about her weight gain as he always bragged to his dad when we got Kye’s stats at dr appointments! I did just realize they didn’t tell me any percentages though! So I don’t know how she is size wise compared to other babies her age??? Maybe they will do it at her next appointment 🙂

You can compare her first pediatrician visit to Kye’s by reading the post about it HERE!