I get asked a decent amount of questions about my blog…mostly about Babywise and Christianity. And others about parenting and babies. One question I get asked often is regarding Brittlynn’s bath seat! I thought I’d write up a little post on it to share my opinion with everyone and hopefully help those who are interested in it!!!

We did not have a bath seat like this one with Kye. I remember Rachael having one and I always thought it was neat but never saw a need. I mean we had one kid. It was pretty easy to bathe him 😉 I registered for this bath seat when I got pregnant with Brittlynn because I knew that with two kids bath time would become trickier. We’d need a way to easily contain Brittlynn so we could have our hands free to bathe them both!

As you can tell in, this video, Brittlynn LOVES her bath seat 😉 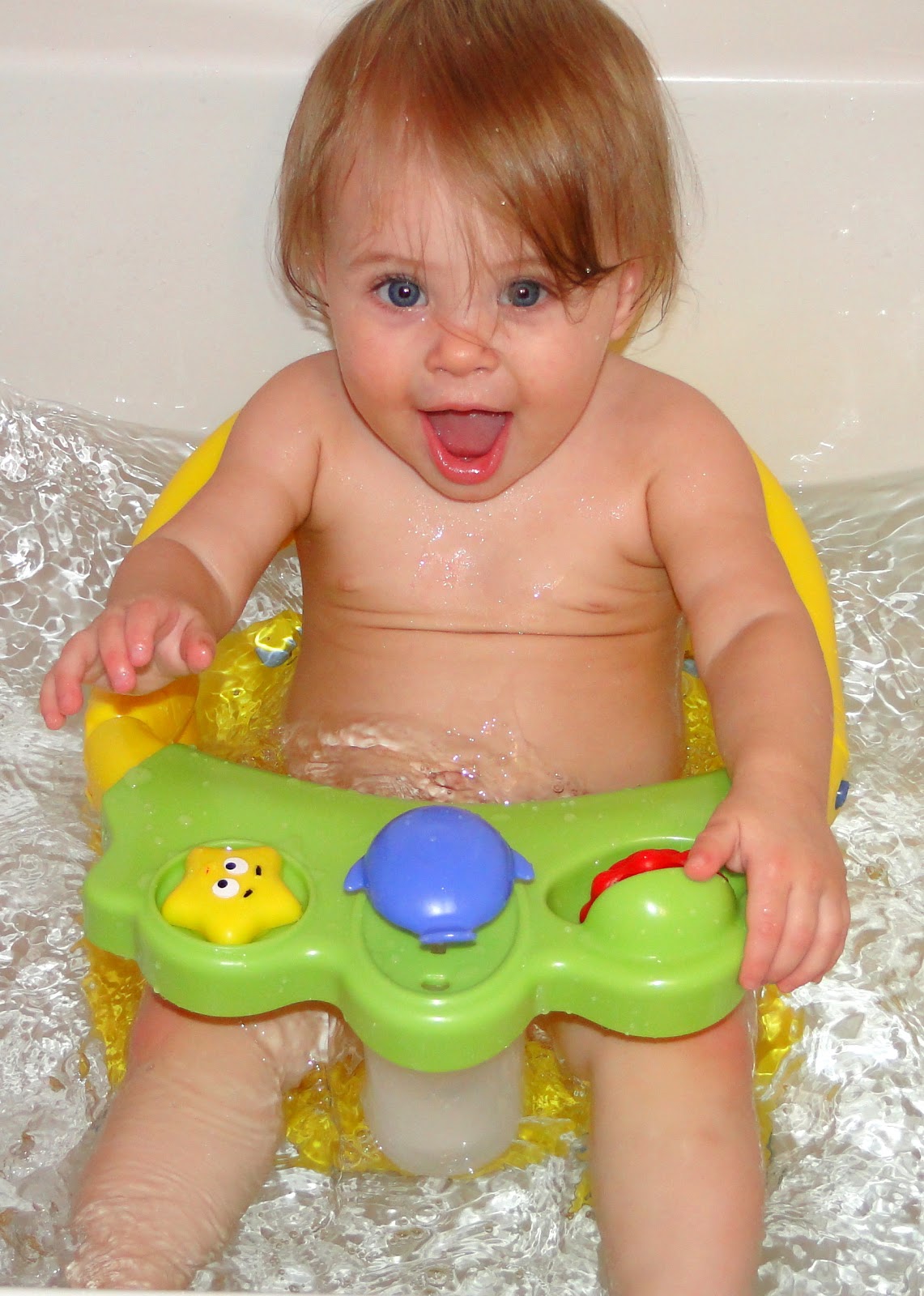 Both of my kids started out using The First Years Infant to Toddler Tub with Sling. I personally think it’s a great baby tub and even works fine once the little sling is removed. We did buy a new one for Brittlynn…I just felt kinda strange using a tub that had been used so long ago? I dunno why??? I sold Kye’s at a kids sale haha! We used one of those sponge things for Kye’s first couple of baths but we jumped right into using the tub thing with Britt. It’s a great tub b/c you can easily put it in your sink and it fits great (as you can see in Kye’s picture!) 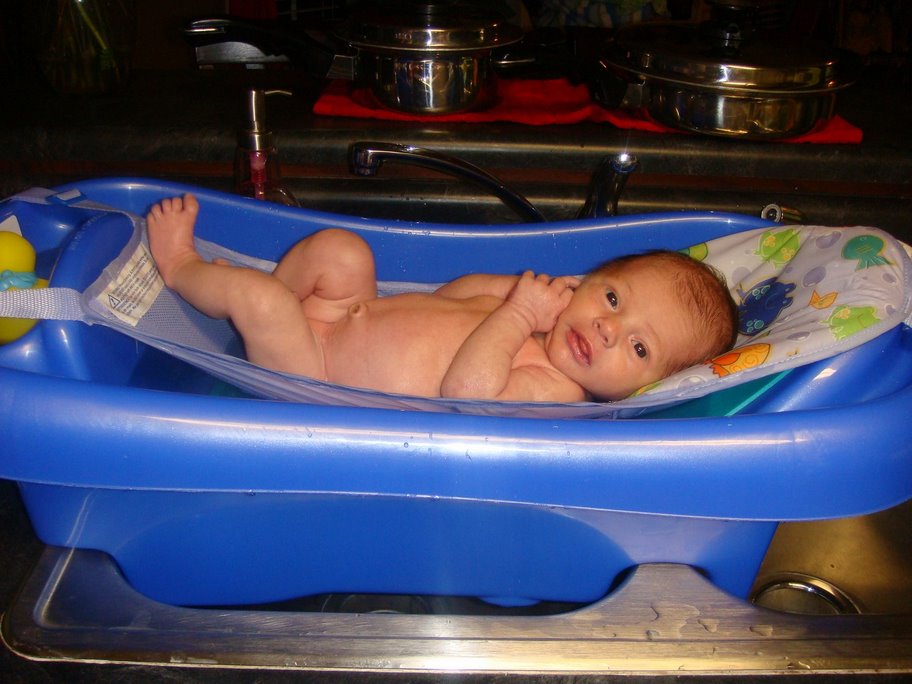 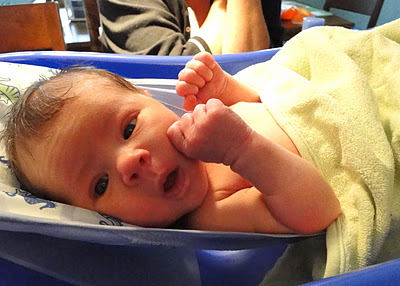 Once Kye got old enough where he was pulling up in the tub and kinda being a bit crazy…we graduated to the Munchkin Inflatable Safety Tub. We LOVED that thing! It was awesome! It kept him from slipping and sliding in the tub and helped him from falling over. He wasn’t quite steady in his sitting yet and the inflatable sides were great. Plus it saved on having to fill the whole bath tub too. Water ain’t free 😉

Kye in his Duck Tub! 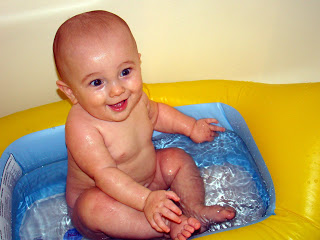 While we loved both of Kye’s tubs (he started just taking normal baths around 9 months old) we knew we’d need something different for Brittlynn. We bathed her by herself in the infant tub but once she started wanting to sit up we thought it was a good time to let them start taking baths together. It is WAY easier to bathe them both at once instead of separately! The bath seat has allowed us to do that and has given Kye a great new friend to play with at bath time 😉 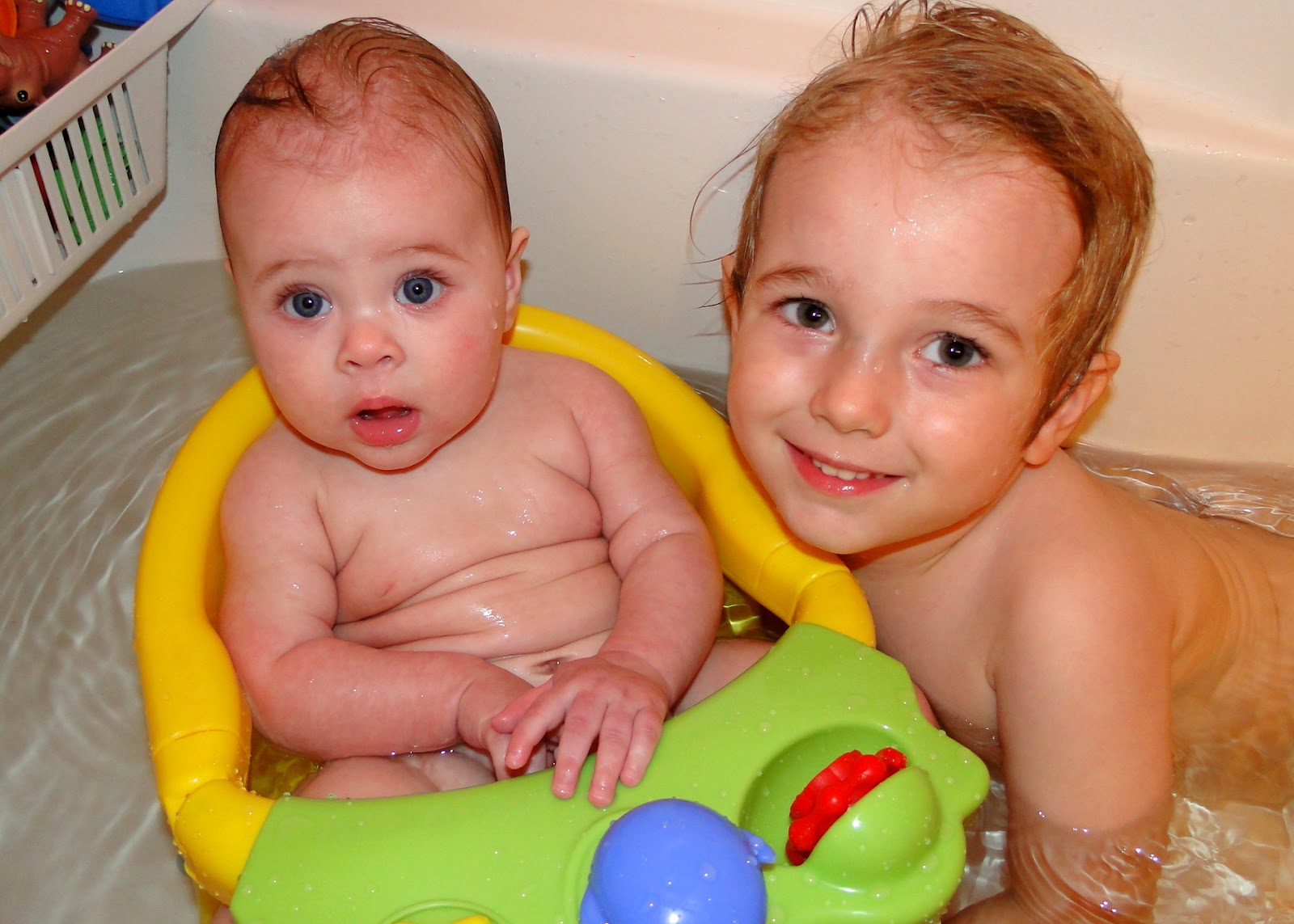 When I went to register for Brittlynn I made a registry on Amazon. I just registered for the cheapest bath seat they had and at the time this was it. They no longer have it on Amazon but it is still on diapers.com. It’s called the Dream on Me Baby Bath Seat. I chose the yellow color since we didn’t know if Britt would be a boy or a girl 😉 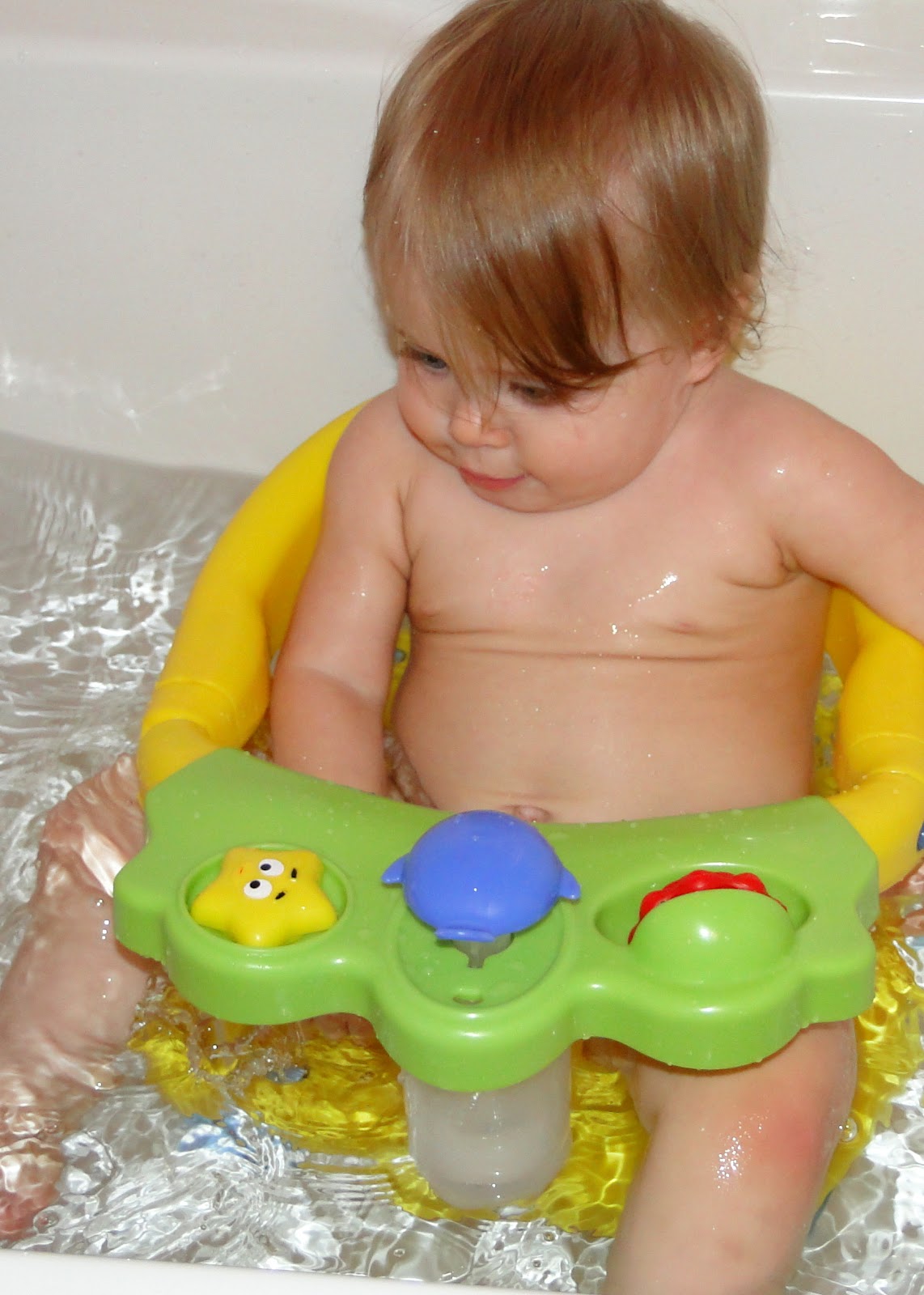 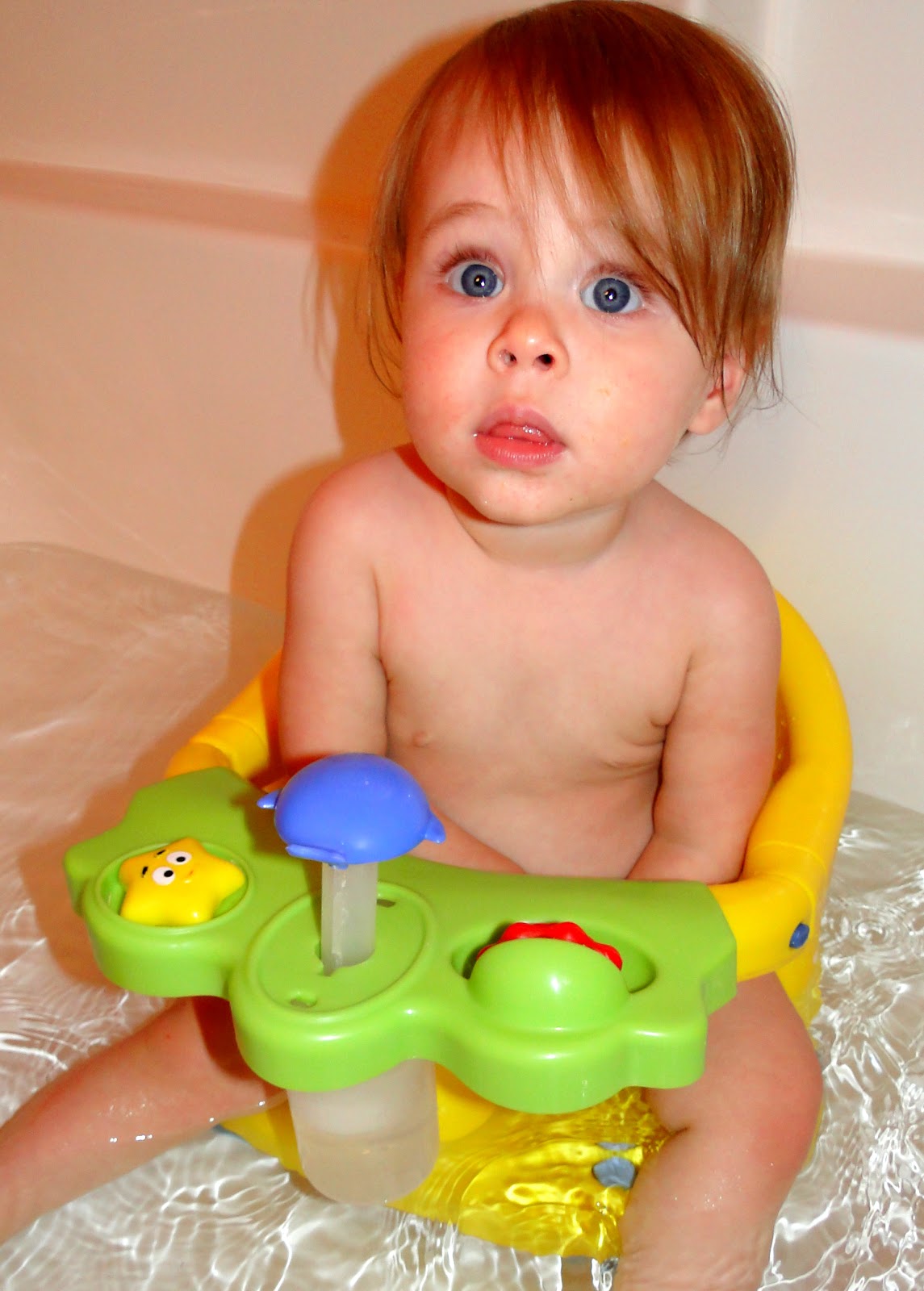 Obviously, you should NEVER leave your child unattended in the tub. But it’s nice that Brittlynn can sit in this seat and we can be pretty confident that she isn’t going anywhere. She leans over a lot to reach the water, pick up a toy, bug her brother, etc. I believe she has toppled over but it’s only been once. And she didn’t go all the way over since Zach was sitting right there to catch her (gotta use those football catchin skills somehow right?). You can even see her attempt to pull it over in this video! 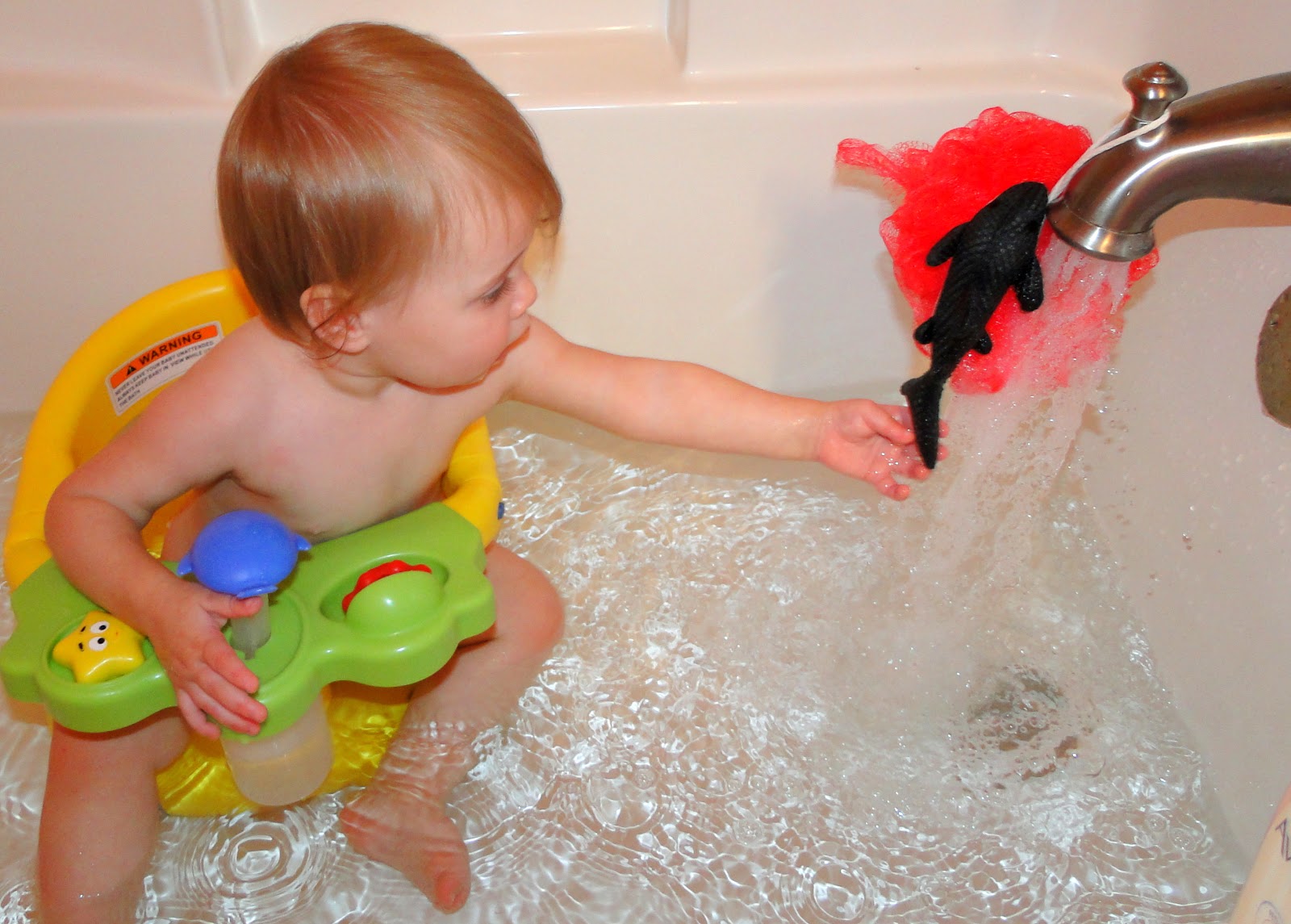 It has three little toys across the front. None of which are super impressive. They don’t hold her attention for too long but it’s nice they are there for her to play with when Big Brother is hogging the other bath toys! Here’s a video of her having a nice conversation with the toys on her seat. The whale has a little container under it to fill with water and it can pump and squirt. Have we done it? No…but I’m sure it’s neat 😉 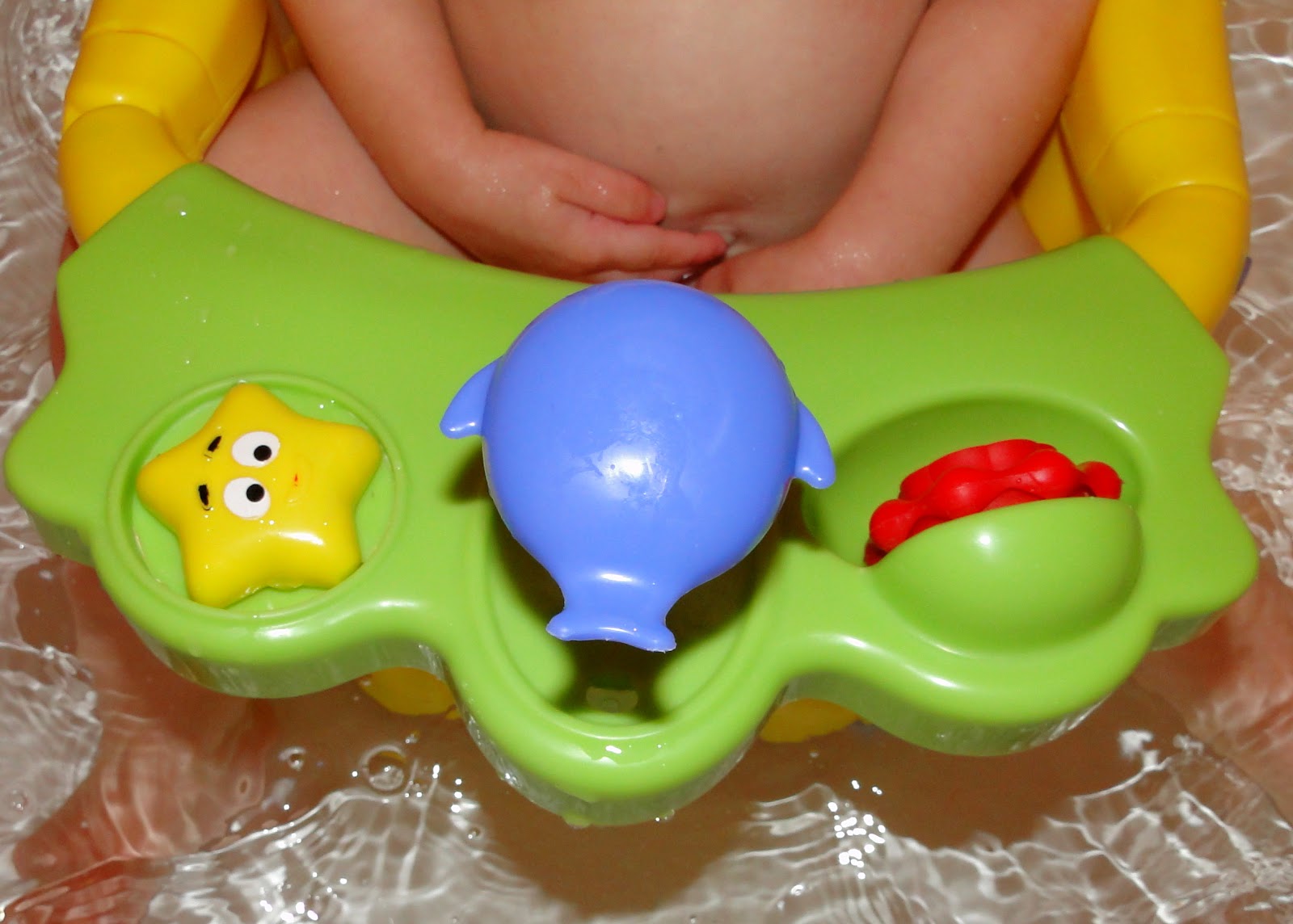 As you can tell it has PLENTY of space for her to spread those legs (flexible child!) 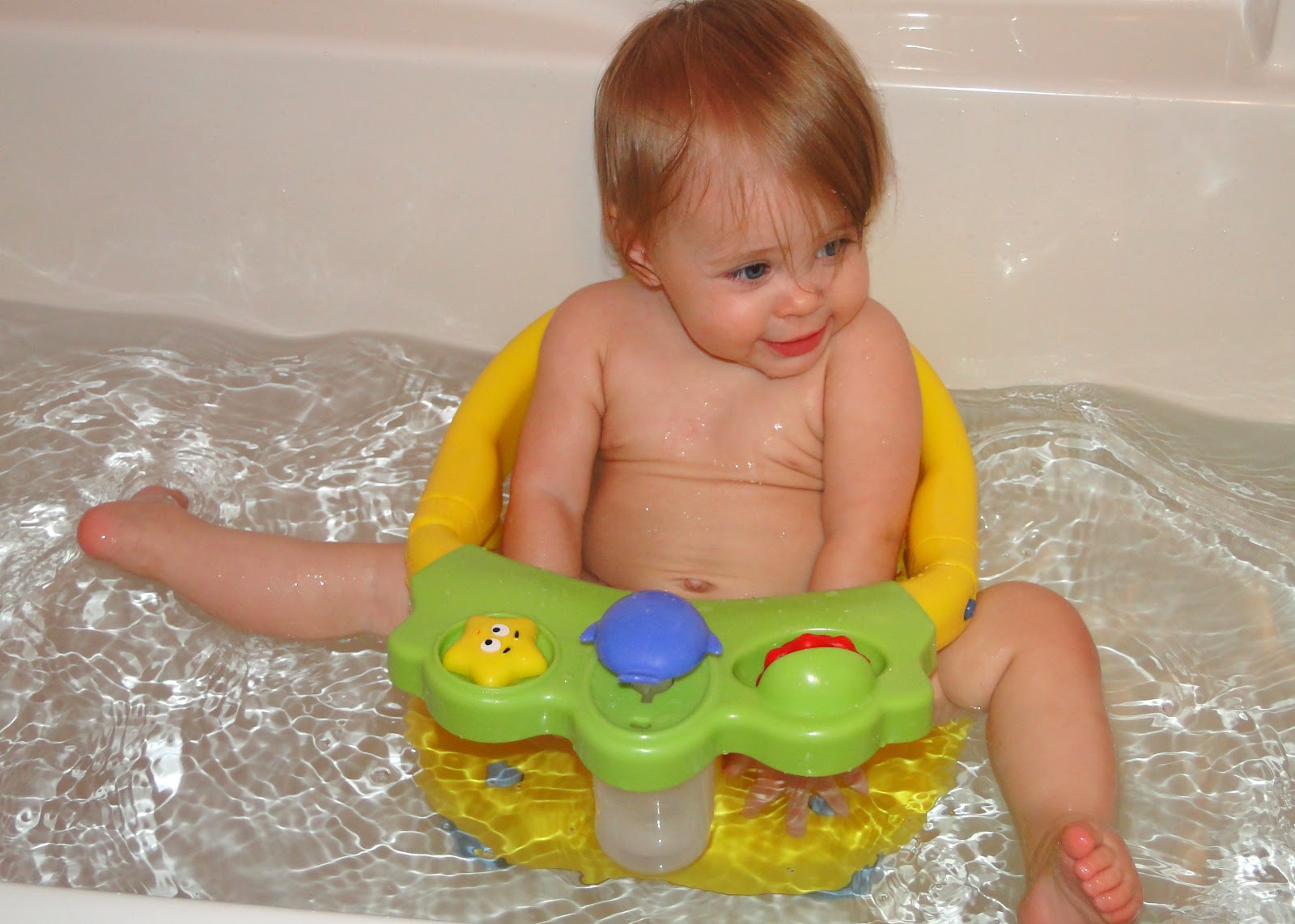 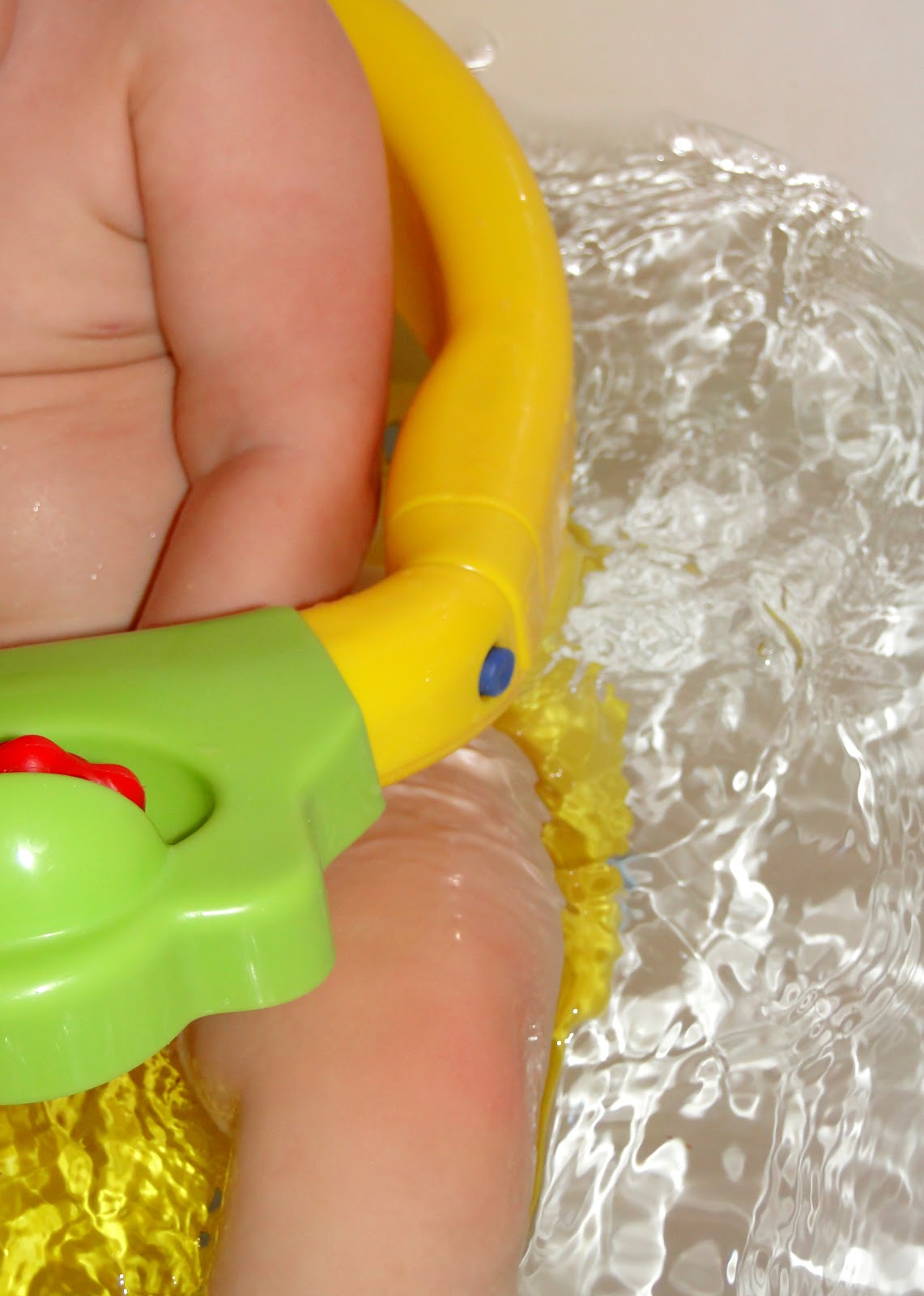 We honestly don’t open it very often. It’s useful I guess to wash the private parts but we just stand her up, clean off those areas, then sit her back down. If Kye had this bath seat as a baby I could see us having to open and close it to get him in and out. Britt doesn’t have the chunky chunk legs that he did, for sure!!! It’s super easy to open and shut so that for sure wouldn’t be an issue 🙂 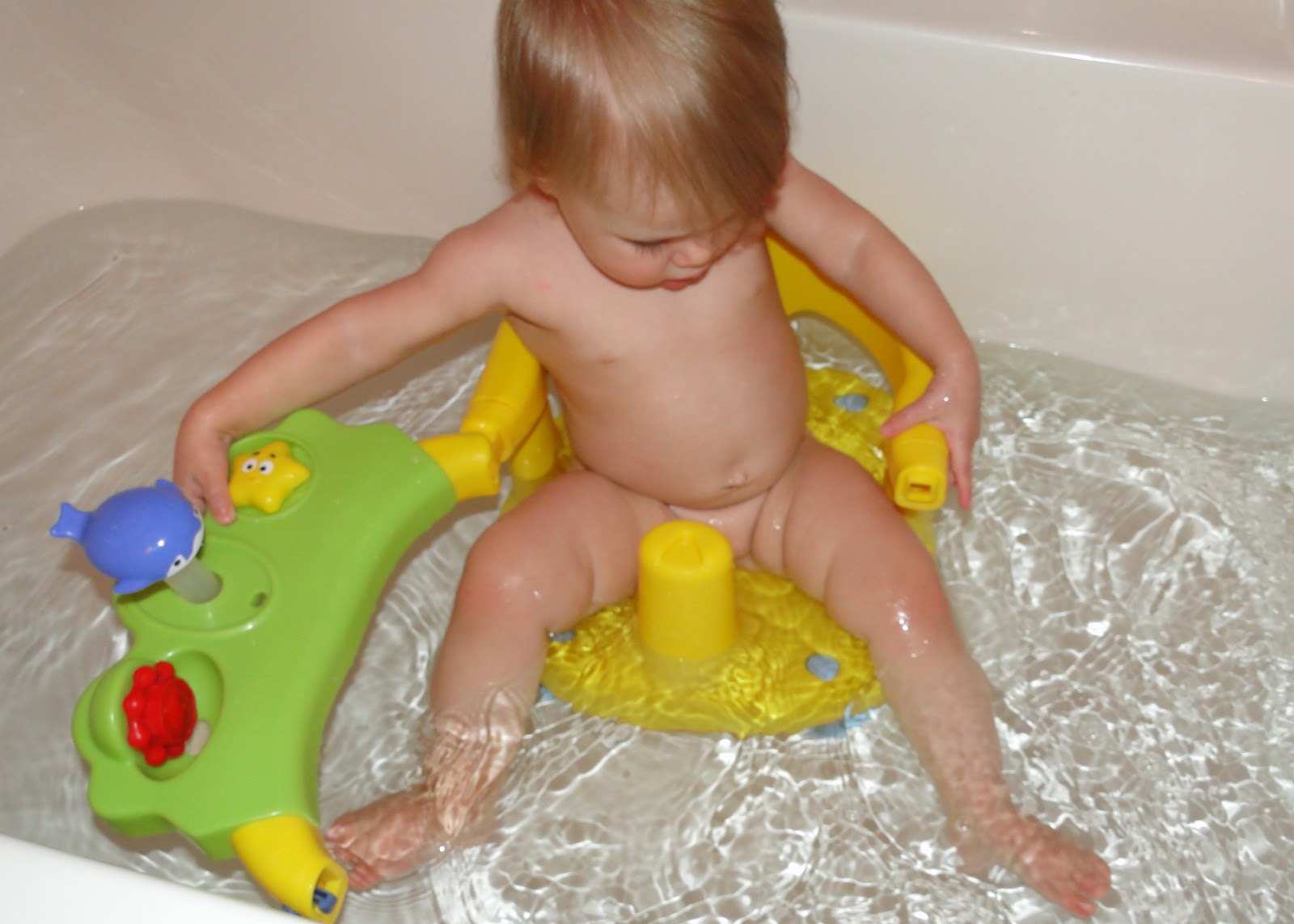 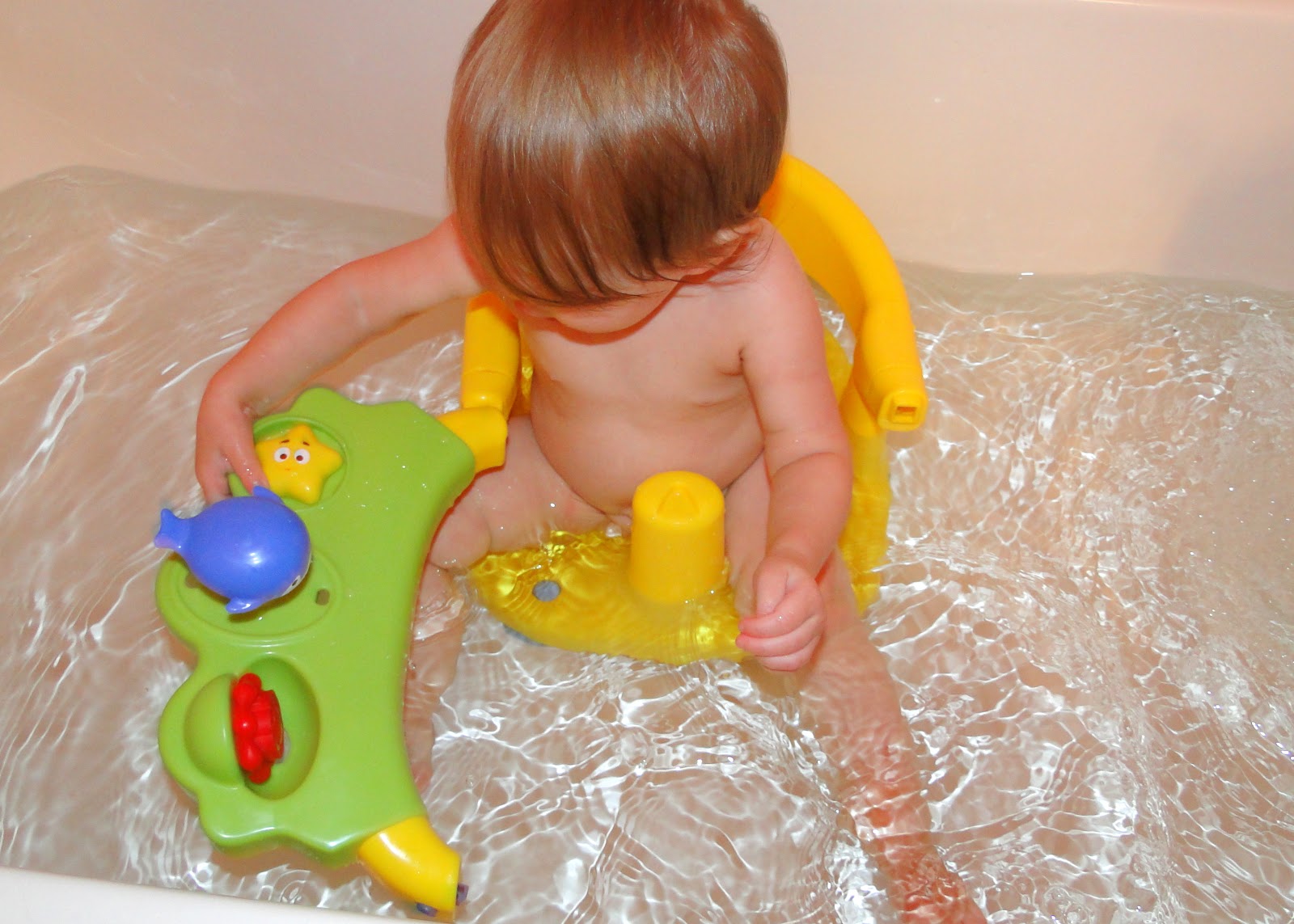 Probably one of the nicest things about our bath seat is that it can just suction to the wall when we are done with it each night. It drips dry and we have YET to have ANY mold or grime show up on that beast. The baby bath tubs get yucky so easy since it’s tough for all the water to drain out. This seat has no issues with that. It’s up and out of the way! 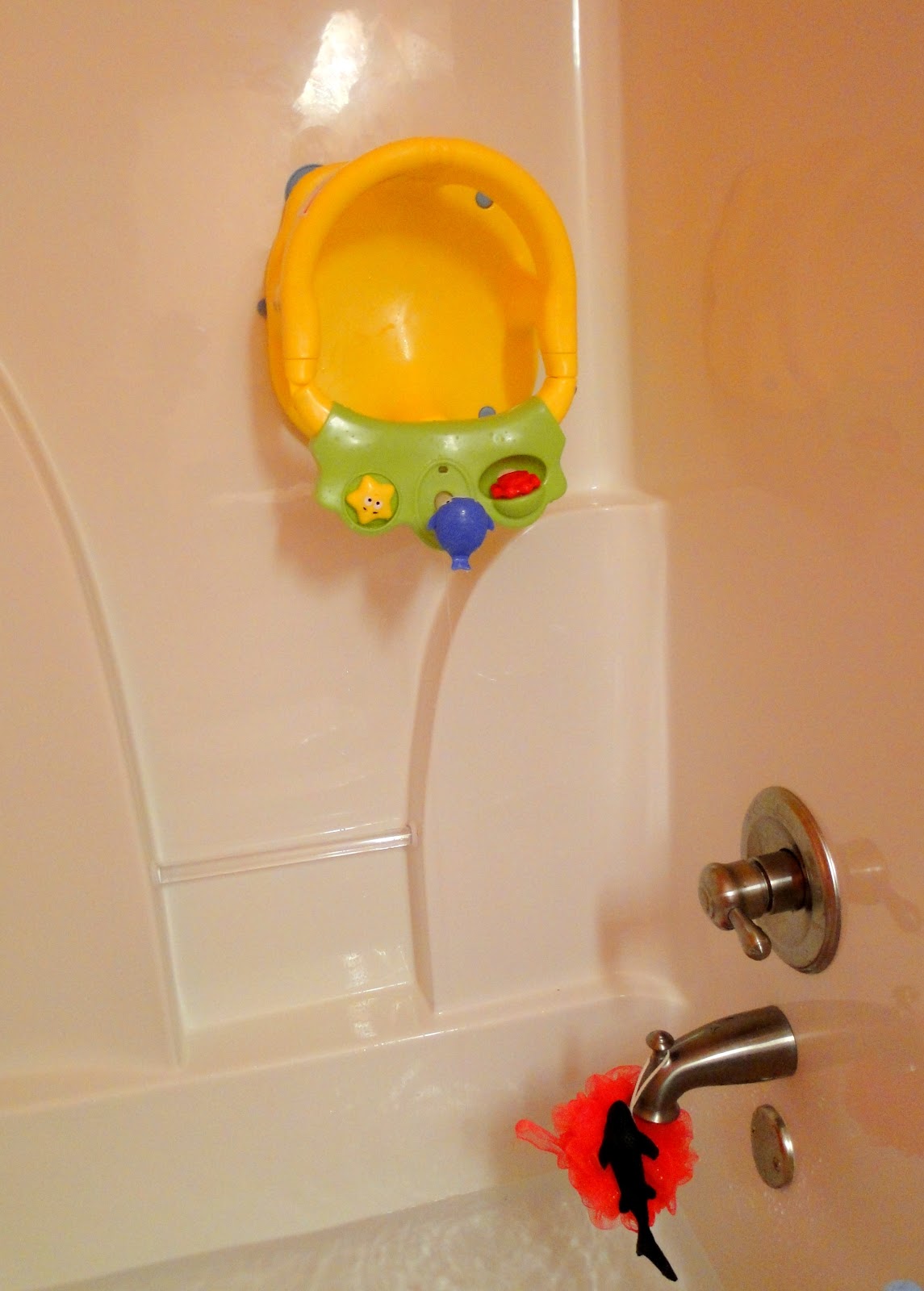 If you have more than one child I totally recommend a bath seat. While we love ours…I by no means think it’s THE one to buy. I’m sure they are all pretty similar and work just fine too! I’d def consider this item to be a “find the cheapest” type purchase. Nothing fancy needed for sure 🙂 Even though Brittlynn is older than Kye was when he started to just take baths in the legit tub without any type of baby item to sit in…I don’t see us graduating her to that for awhile. Bath time is SO smooth and easy right now with her in the seat and Kye the only one who is able to roam in the tub 😉 I’m not ready for two squirmy kids in there yet!

Do you have a bath seat??? What are your thoughts on it?