The advantages and disadvantages of sibling age differences.

By: Elaine from Faithfully Infertile

The age difference between children brings different dynamics to the family.

I have three children. Little Bug and Sweet Pea are just over 2 years apart.

The age difference between my oldest and youngest child is just over five years.

These are my experiences concerning the positives and negatives of having children two, three and five years apart.

Advantages of a Two Year Age Gap Between Siblings:

Growing up I always said I never wanted children two years apart and then my oldest two were born 26 months apart!

Now that they are 3 & 5 years old, it’s really fun having children so close in age.

At ages 2 & 4 they really played very well together.

They would go off and play together for quite a while before they needed some structure to their day.

They share a lot of clothes which is nice from a financial viewpoint.

As my oldest daughter gets older, there are fewer clothes that can be passed down because she wears her clothes out more the older she gets.

However, for the first 2 years of my younger daughter’s life, I bought her very minimal clothes because she was able to wear most of her sister’s clothes.

At those young ages she could care less if she was wearing hand me downs and as long as the clothes were still in good condition, she wore them!

Disadvantages of the Two Year Age Gap Between Siblings:

I was really nervous about having a 2-year-old and newborn!

The first 6 months were very challenging in balancing their needs.

In the meantime, there were challenges mainly because my oldest daughter was the type of toddler that you could not leave unsupervised for more than 2 minutes or she would get into something!

Babywise was a lifesaver in the sense that I was able to organize our days in a way that my oldest daughter was occupied and busy during feeding times for the baby.

I had to learn to juggle their schedules to where my oldest daughter was sleeping, in Room Time or having TV time so I could feed the baby without worrying about what she was getting in to!

That was challenging because my toddler was so active and not the type to find something to entertain herself whenever I was busy with the baby.

Unless it was something mischievous!

For this reason, I had a pack n play set up in our bedroom until my oldest daughter was 3.5 years old so that I could have a safe place to put my older daughter when needing to care for my younger daughter for 10ish minutes (like laying her down for a nap or a diaper change).

Overall, I would say children 2 years apart was very challenging in the beginning, but the reward of having two children who are built-in playmates for each other now was well worth the close age difference.

Posts You May Find Helpful:

Advantages of the Three Year Age Gap between Siblings:

My second and third children are three years apart.

It’s amazing the differences in a 3-year-old compared to a 2-year-old.

So, in my experience, it was way easier to have the 3-year-old and new baby.

The 3-year-old is actually truly helpful with her baby brother.

Now that my baby is almost 6 months old, my 3-year-old loves to interact and play with her brother!

When he loses all his toys and can’t find them I can say “Sweet Pea, help brother find his toys.” and she comes running eagerly to help!

This is partly personality-related and it is also age-related, but I don’t have to be so vigilant to keep my 3-year-old occupied while feeding the baby.

She finds things on her own to do and usually comes and sits by the rocking chair with whatever she has chosen to do while I feed the baby.

She is quiet and not a distraction at all.

Disadvantages of the Three Year Age Gap Between Siblings:

This doesn’t apply with my daughter who is 3 years old now, but if I had had a newborn when my oldest daughter was 3 it definitely would have been a struggle to deal with the “age 3 behaviors” and a newborn!

My oldest was a very difficult 3-year-old.

That has been her toughest year so far.

The first year of a baby’s life is tough in the sense that you are getting up to feed in the night, sleep training and hoping they sleep well for naps so they don’t get overtired.

Dealing with all that on top of 3-year-old drama would have been very difficult.

My 3 year old now (who has just turned 3.5 years old) is relatively undramatic.

She has her moments and days, but if you have a strong-willed 3-year-old and new baby, that would be very challenging.

I’m thankful for the birth order of my girls! 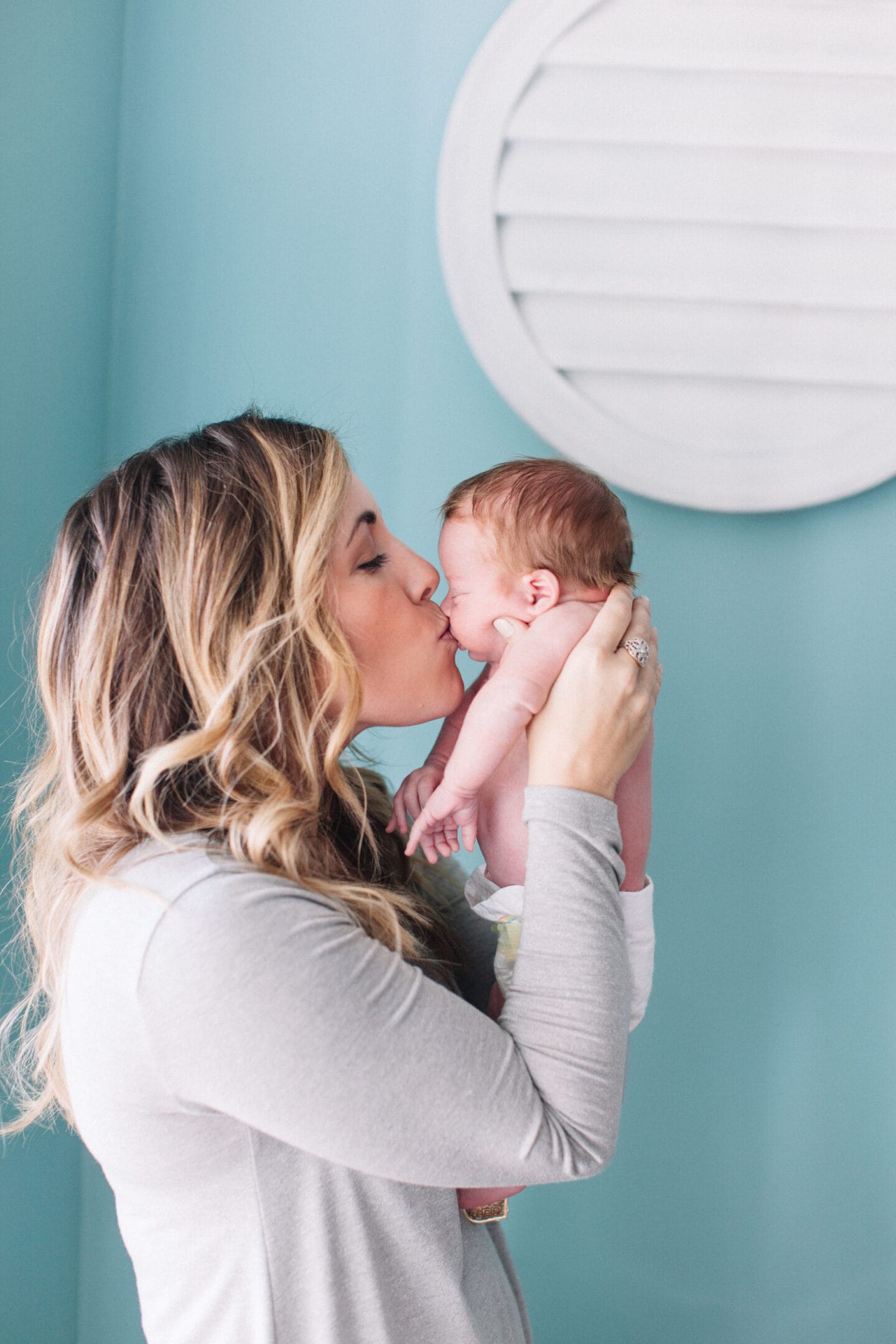 Want More from a Keepin’ It Real Babywise Mama?

Advantages of the Five Year Age Gap Between Siblings:

A 5-year-old can be really helpful with an infant sibling!

Little Bug has come to my rescue many times with paper towels and burp cloths when the baby has a big spit up and I am covered in it and need help!

She is also very eager to hold her brother (for about 2 minutes) and entertain him.

Having the two older children with a baby provides lots of entertainment for the baby.

The girls are like ping pong balls in the house bouncing from one end to the other and the baby loves to just observe all their antics.

A 5-year-old is very aware of a new baby.

My 5-year-old was very excited about becoming a big sister again whereas at age two she didn’t understand to the same degree as now of what a new baby entails.

She comes up to her brother multiple times a day, squeezes his cheeks and tells him she loves him! It’s so sweet to watch.

Disadvantages of a Five Year Age Gap Between Siblings:

I have noticed a pretty big negative in having a bigger age gap between siblings.

A 5-year-old’s schedule and needs are completely different from those of a newborn and young baby.

My baby sleeps 6 hours during the day and my 5 year old wakes up at 7:30 am raring to go and doesn’t stop until bedtime!

Again this has to do with personalities, but my 5-year-old is a very social little girl who likes to constantly be on the go.

This creates many difficulties in the dynamics of our family because it is very difficult to be on-the-go with a young infant that requires so much sleep.

We are a homeschool family so this is even harder since our daughter doesn’t get out of the house for school every day.

Like Emily, our family has chosen to put baby first the first year because the benefits you reap from establishing good, healthy eating and sleeping habits in the baby during the first year will pay off for many years down the road!

In the meantime though, it creates some interesting scenarios in keeping baby on schedule but at the same time meeting the needs of our very social five-year-old.

We ended up letting our 5 year old attend a school that partners with homeschool families so she can have an outlet 3 days a week and still be homeschooled the other two days.

As with anything, this too shall pass, and when our children are 3, 6 and 8 years old, their schedules will align much better and these challenges will turn in to new challenges!

Posts You May Find Helpful:

With any age difference and any number of children you have, you are going to have challenges along the way.

There is no perfect age difference.

There are going to be positives and negatives to every age difference.

You just have to learn to appreciate the challenges for what they are because that’s where life has you in the present.