I’ve heard Crissy mention Baby Wise before but I never really asked her much about it because I was pregnant and couldn’t even begin to think about when the baby would actually arrive!

When she was over here two weeks ago she told me about Baby Wise again and suggested that I read the book. I ordered it on half.com and read it right when it arrived (Kye and I got some more fun mail time outside!). Really, you don’t have to buy the book. It’s pretty repetitive and could be summed up in a short couple pages. 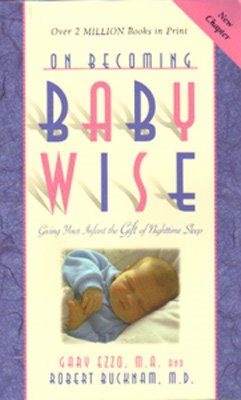 The goal of the system is to get your baby to sleep through the night. Don’t we all want that? At first I was planning on not having Kye on a schedule because I didn’t want to be on one. I thought a schedule would tie me down and I don’t want that! I’m too busy and travel too much to be stuck to a schedule. Well once Kye was born I realized that having a schedule doesn’t tie you down…it gives you freedom. It’s like when you become a Christian you hear all the things you can’t do (can’t drink, can’t have sex before marriage, can’t cuss, etc, etc) and you think that limits you but in reality it gives you freedom. When you know your boundaries it’s easier to live within them. Having a schedule will allow me the freedom to do anything I want because I’m not stuck at home waiting for him to want to eat. He eats when I feed him! He sleeps when I put him down! Sounds great to me!

Right now, and until he’s eight weeks old, I’m in Phase One. He needs to eat (counting from the beginning of one feeding to the beginning of the next) every 2 1/2 to 3 hours. From weeks 5 to 8 I’ll be changing it up a little bit and feeding him every 2 1/2 to 3 1/2 hours. So far it’s working out really well! Baby Wise recommends feeding him, then changing him, then having play time (keeping him awake) then putting him down for a nap an hour to an hour and a half before his next feeding time. And I have to wake him up for each feeding! That can be tricky!

The only time you don’t follow that schedule is at night. After his last scheduled night feeding you put him straight to bed and let him decide when to wake up through the night (putting him back straight to sleep after the feedings) then wake him up for his first morning feeding! 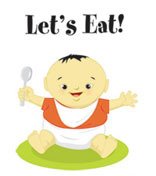 I started Baby Wise one week ago and he’s really catching on. I think spreading out the feedings those first couple of days was the toughest part because he had gotten used to eating every two hours. At this point I’m trying to get him used to playing then sleeping as he prefers to sleep right after a feeding and play later!

Here is our schedule, which follows what Baby Wise recommends:

7:00 Morning Feeding!
after that feeding I wait an hour and pump
10:00 Next Feeding
after that feeding we typically go for our 30 min walk
then I pump an hour after the feeding finishes
1:00 Lunch Feeding
this is the best time to run errands! haven’t done it much yet but that’s my plan eventually!
4:00 Feeding
If I didn’t go on the walk earlier I go on it after this feeding so I can shower when Zach is home
We eat dinner once he goes down for his nap after this feeding
7:00 Dinner Feeding
bath time
10:00 Night Feeding
I will sometimes go to bed after the 7:00 feeding and let Zach keep him until after this feeding then we all three go to bed!

He typically wakes up twice during the night before the 7:00 feeding. Once around 1-2 and once around 5ish. Last night though we got him to sleep through the 5:00 feeding! He was awake and it was annoying but he didn’t need to eat yet!

Our nightly routine is that Kye sleeps in the bassinet next to Zach’s side of the bed and if he’s fussy and needs to eat Zach wakes me up. Then while I use the bathroom (and brush my teeth I do it before each night feeding to wake me up and prevent me from snacking haha) and Zach changes his diaper (it helps Kye wake up). Then I feed him and put him back to bed afterwards! I’m getting around 6-7 broken hours of sleep a night and Zach’s getting close to 8. We learned early on that Zach requires more sleep to be able to nicely function so it’s important that he gets those 8 hours! I can function on less than he can so, so far, I’m okay with how much I’m getting. It will only get better once Kye sleeps through the night!

Supposedly by week 7 to week 10 Kye will be sleeping through the night and will be getting around 6 feedings a day. Won’t that be wonderful? Of course, I will keep everyone posted on how it goes but so far the whole thing just really makes sense to me! It’s a little tough to keep him on the schedule when things conflict (like church) but eventually I will be able to give him a bottle at the times that it’s not convenient.