Last night we finally got to spend some time with Seth and Crissy! It’s been forever since we’ve seen them, but not for lack of trying…Crissy and I can never get our schedules worked out. It’s so nice being around people who have a baby (and who are having ANOTHER one in July!). Crissy breastfeeds Stevie and I appreciate all her help especially since I don’t really have anyone else to go to about that subject! She’s actually the one who recommended that I see Stacey too and I’m soooo thankful for that!

One of the best things of the night was that our dogs got to experience being around a baby! Stevie will be a year old the end of March so she is crawling and exploring (which was adorable and made both Zach and I so eager for Clover to be here!). We put Levi out when they first got here, not really so much because of Stevie but because he flips out whenever anyone comes over that he doesn’t know very well.

We left Sadie in and, of course, she did awesome. She was a little scared of Stevie but for the most part went right up to her and would have loved some attention (but Stevie had no interest in her, poor Sadie I don’t think anyone likes her other than us!). Once we let Levi in he barked like crazy. For a really long time. He was so so so terrified of that child! He wouldn’t go near her and just kept barking. I honestly think this is an okay reaction though because at least he didn’t feel territorial or attempt to attack her. Thank God Seth and Crissy are such easy-going people! They didn’t panic at all about how Levi behaved! 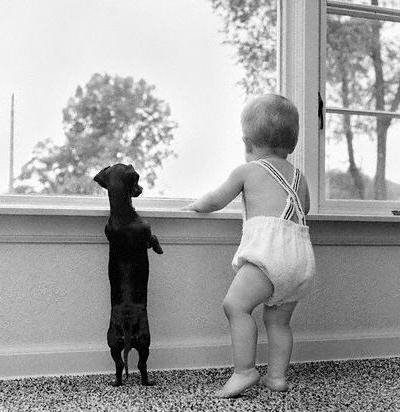 Eventually he chilled out some and became more curious. Stevie loved every second of it and thought they were playing peek-a-boo because Levi would run around a corner, look at her, then run around to the other corner and look, and back again! So cute. He did finally approach her and once he did it was hard to get him away! He sniffed her butt a lot and even gave her kisses on her feet and in her ears! He did get a little too playful though and we had to separate him but I was so impressed that after only one evening he even wanted to play with her! It gives me such high hopes for our baby!

Zach is really not worried about the dog at all…but I know how possessive Levi is of me and I’m just nervous that he’ll be very jealous of Clover. Yeah he did great with Stevie but she’s not taking up all my attention the way Clover will. Hopefully he will adjust! Well not hopefully…he HAS to adjust doesn’t he? I read up on the subject and The Dog Whisperer guy says to make sure we still do all the same things with the dogs that we normally do so they won’t see the baby as a threat and to allow them around the baby and the baby’s things only when we tell them they can be so they see the baby as a leader in the family as well.

I don’t like that the barking still isn’t gone (have I mentioned I currently have a red sheet completely covering our front door in order to block Levi from seeing out the STUPID long narrow windows on each side of the door until the blinds we ordered come in? why in the world do builders put those dumb windows there!?! I can’t stand them!) after the visit with Seth, Crissy, and Stevie I do feel like Levi will accept Clover! Since Levi is the only inside pet who doesn’t sleep with us (he sleeps in his crate) Zach said he can see Levi eventually sleeping in Clover’s room! I don’t know if Levi will love the child THAT much but who knows…only time will tell!!!