“There are a lot of breast-feeding consultants out there, but what I need now is a solid food consultant.”

I read that quote and couldn’t help but to TOTALLY agree!!! I left Kye’s dr. appt on Wenesday feeling like Kye was ready for solids but still not too sure how to go about it. Like I mentioned, Stephanie said that cereal is up to me, to start with veges, to give him the same vege for 5 days then introduce the next one, to feed him 1/2 a jar twice a day, to start him on diluted juice, and to mix juice with his cereal.

Okay. She did NOT tell me which vege to start with, what kind of cereal to buy, and what kind of juice to buy. I got to Publix and felt VERY overwhelmed when I looked at ALL the millions of options. This lady who worked there could tell I was confused so she started offering up her advice and I basically tried to ignore her because she said she gave her kid cereal when he was 1 month old and just did everything she wanted no matter what her dr said (um not quite me huh?). In the end I bought green beans, carrots, and sweet potatoes. I thought I’d start with green beans because Zach and I both love them and I figured Kye would too. I bought a mixed cereal and a whole wheat cereal thinking that I didn’t want any fruit yet and that those were both pretty plain. I also decided against doing ANY juice right now, it just didn’t settle well with me.

I came home and was pretty pumped to figure out all this stuff! I’ve been getting a lot of pamphlets in the mail that cover how to introduce food and other tips. My problem? They all conflict each other! So many things say to breastfeed him on one side then do solids then feed him from the other breast, other things say to feed solids first then offer both breasts, and still others say to completely breastfeed then offer solids. Some advice says to start with fruits, others say cereal, others say veges. Then none of them agree on time of day either. Some people say night, some say morning, some say whenever you want! 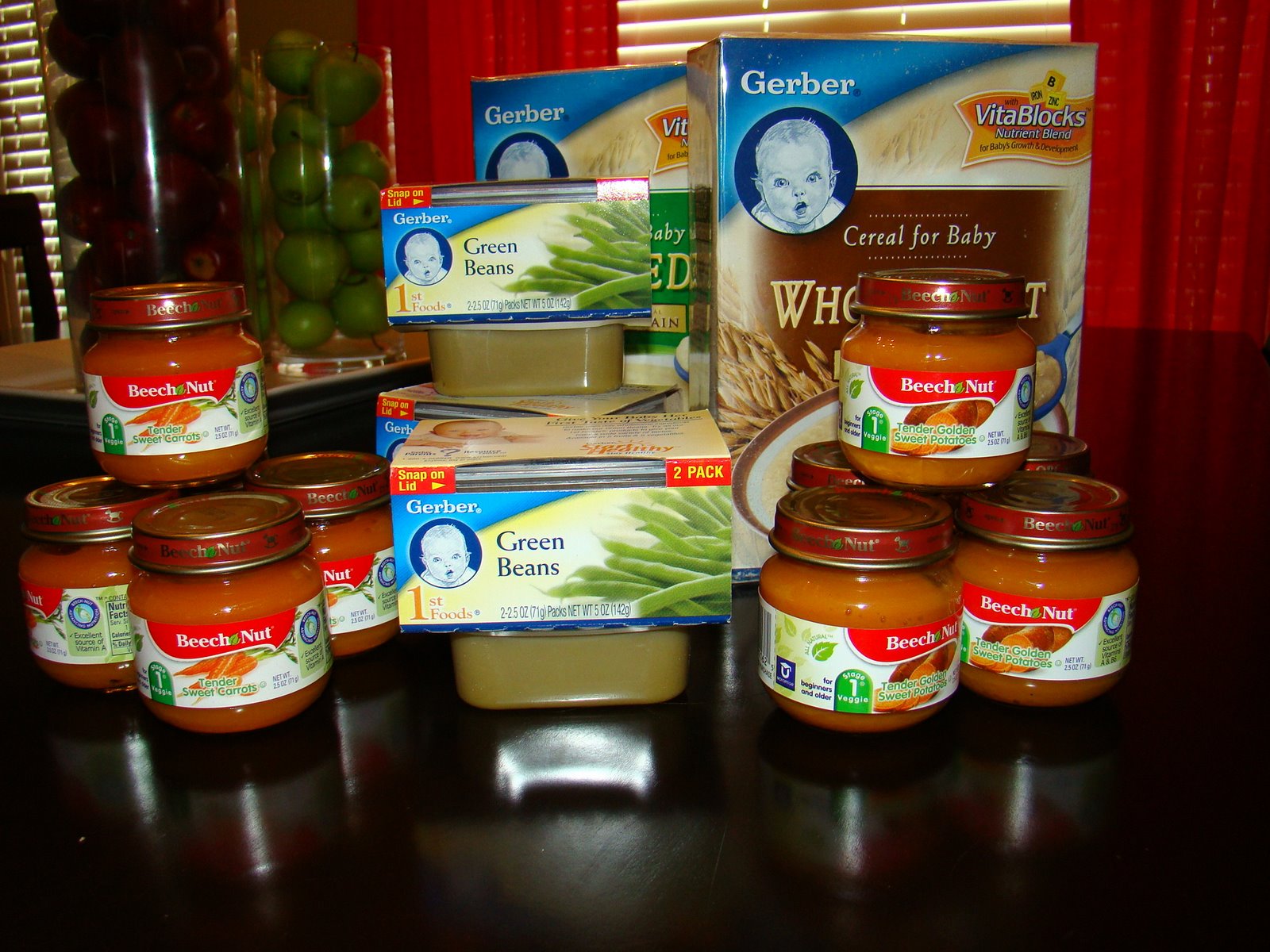 Bottom line? I was left feeling VERY confused. Being a by-the-book parent I NEED direction. I crave for someone in charge who knows better to tell me “do this” and I’ll do it. I’ll do it exactly how you tell me to! I decided to not follow any pamphlets as they were mostly from companies afvertising their products. Instead, I decided to read what The Baby Whisperer has to say about it.

She is very anti-starting baby food until 6 months old. However, she does mention that if the baby weighs over 16 lbs (check!) that they may be ready to start early. Based off that I decided it is time to start. She says to start at breakfast only for one week, then both breakfast and lunch for a week, and finally all three meals, with breastfeeding as a snack for the “forth meal.” Hogg says to feed solids before breast and to move the proven foods to lunch and dinner when you add a new food to breakfast. Her recommendation is to start with squash and pears.

I agreed with her on some things. I like the idea of starting at breakfast and moving proven foods to later in the day because if, by chance, he does have an issue with the new food I’ll have all day to figure it out and will be able to call the peditrician if needed and it’ll be out of his system by bedtime. I did not like the idea of offering him food first as if he’s really hungry won’t he be super fussy and therefore less able to focus on eating the new food? I also didn’t like how she said to offer the breast as a snack! Plus I’m NOT doing pears and squash first! I agree with Rachael, and many others, that veges should be first. It makes sense that fruit is sweeter so the baby will like fruit more and if you do fruit first they will be less likely to enjoy veges.

In the end, I decided to go with my trusty Babywise. It’s never done me wrong in the past! Babywise II discusses solids but just like the first book I feel like it doesn’t go into enough detail. I went to the Babywise Blog and followed some of her advice along with the book. The book discusses feeding him solids after the breast since liquids are still the main source of nutrients for him. It also says to do solids at 3 of his 4 mealtimes (I’ve picked 7, 11, and 7. The book says 7, 11, and 3 but I like the idea of Zach being home at the 7 pm one so he’s part of it too and we can all eat dinner together). BW says to do cereal first which I agree with. My mom said she did that for us and I think it’s the best thing because it’s bland and cheap!

The book says to introduce cereal at MY most convient time of the day (I did after his 7 am feeding) and to do it just at that time for about a week. By week two I’ll be doing it at breakfast, lunch and dinner. It says to only use RICE cereal (which isn’t what I bought of course). And to mix 1 TBL of cereal with 4-5 TBL of breastmilk, keeping it pretty thin but not so runny that it will come off the spoon.

After 2 weeks of cereal only then you start with veges, yellow veges (squash and carrots) first. Then after those two weeks do peas and beans with fruits two weeks after that. They suggest mixing the fruit with the cereal and I like that idea as it makes life a little easier! I have carrots but no squash and no peas! BW says to feed cereal as a part of his diet until he’s a year old and to wait on meats until he’s also a year old.

Juice is never a must=have and shouldn’t be introduced until he’s 6 months old and even then it shouldn’t be an everyday thing. Once all foods are introduced (other than meat) it says his solid food day will be like this:

I, of course, agree with pretty much everything Babywise says! I plan to follow their plan but to mix the cereal with water instead of breastmilk. Since I’m not doing a daily pump session anymore I don’t have extra milk sitting around and I don’t feel like it’s fair to Kye to pump while he’s eating (pump the side he hasn’t yet eaten on) in order to have milk for the cereal since he won’t eat ALL the cereal anyways and that’s a waste of his milk. I researched it online and liked what one lady said…she mentioned that adding water isn’t bad, that it’s part of the SOLID diet and that he’s getting all the breastmilk benefits from the LIQUID diet! Makes sense to me!

As with everything else in life, I feel better with a plan. Once I find one I like I stick to it pretty hardcore. I took a little advice from Baby Whisperer, but I plan to mostly follow Babywise down this solid food journey! Wish us luck!