Two weeks ago (I know, I’ve been too busy living life to actually sit down and blog about it!) we had Kye’s 18 month pediatrician visit. It was a pretty exciting one because it’s the last of the 3-6 month well-visits and from 24 months on they’ll only need to see him yearly for a check-up! Yay!

I didn’t even realize we had the appointment until late that Sunday night after I’d driven home from my lack-of-sleep weekend in Atlanta. Needless to say, I did NOT have any type of question list prepared. We just kinda winged it like most non-anal parents probably do on the reg! When we got there we had hardly any wait which was WONDERFUL (mental note: make all of Kye’s appointments at 9:45 on a Monday morning). They took his stats and they were: 27.5lb (70th percentile), 33 3/4 inches tall (85th percentile), and 19 inches head circumference (75th percentile). We (coughZACHcough) actually had them measure his length twice because the first time he was only 32 inches which didn’t seem right. Guess it’s good that they re-measured 🙂

Kye behaved wonderfully while the dr did her check-up and I HIGHLY recommend to all parents to invest in a dr. play kit I really think it’s why he does so well. I enjoyed seeing Dr. Kelly again as she is the only one up at Dr. Griner’s office who asks the milestone questions. It was funny because when she asked them I’d say “yes” to each questions (such as: can he stack 3 or more blocks, can he say 3 or more words, etc) and then Zach couldn’t help but to put on his “Brag Dad” hat and tell her how many blocks he can stack, how many words he’s saying. It reminded me of his mom telling everyone she meets about Zach’s football accomplishments (I mean he was a baller haha) but, at the same time, it was cute to see him so proud of his son!

Shots this time around were the hepatitis A and diphtheria, tetanus and pertussis ones. They also pricked his toe to check his hemoglobin which came back normal. I left, as usual, for the shots but could hear him SCREAMING outside the door. I guess he’s at the age where he knows what’s going on and Zach said that the needles were bigger this time around.

poor baby! daddy’s trying to show him pictures of himself to cheer him up 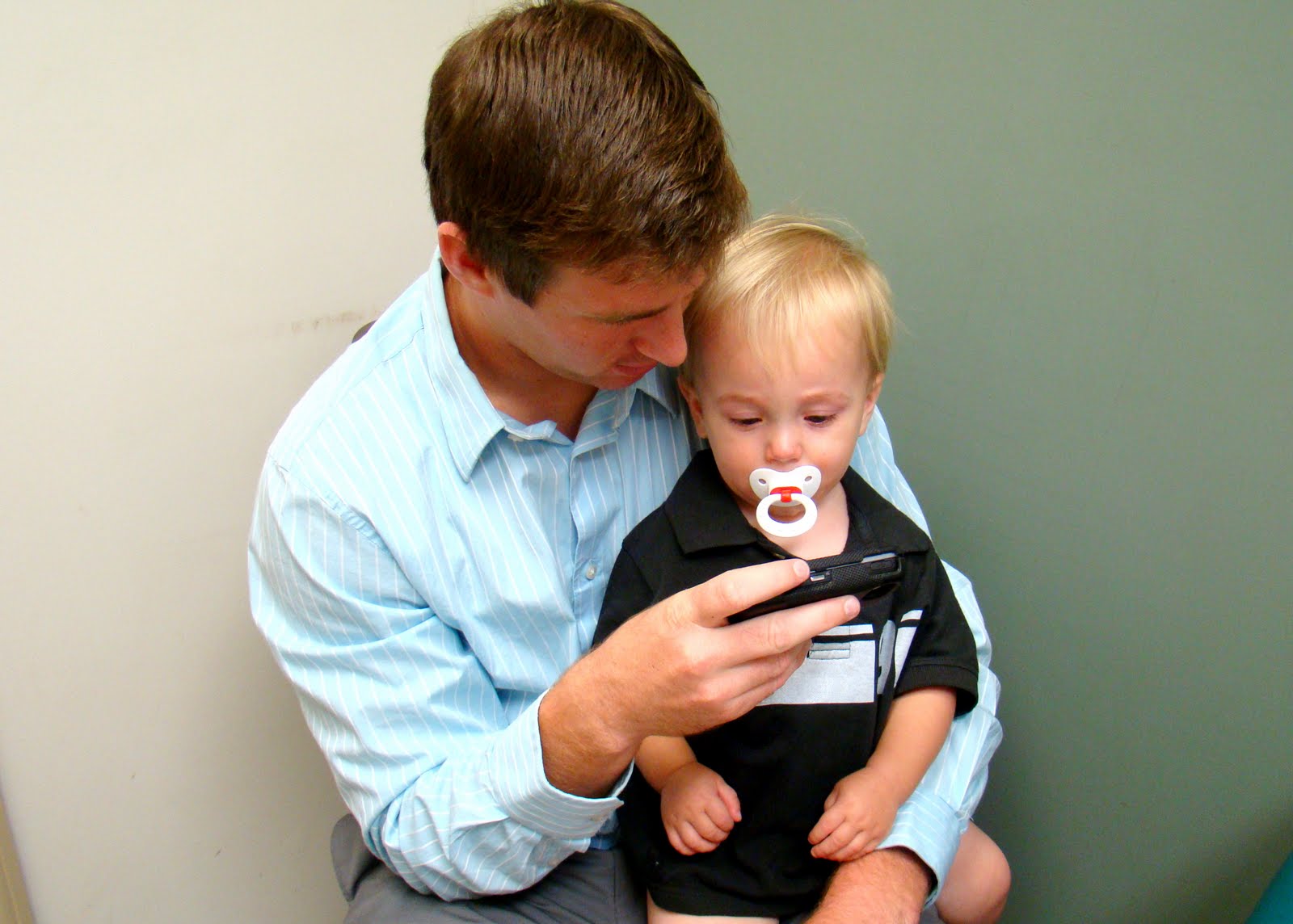 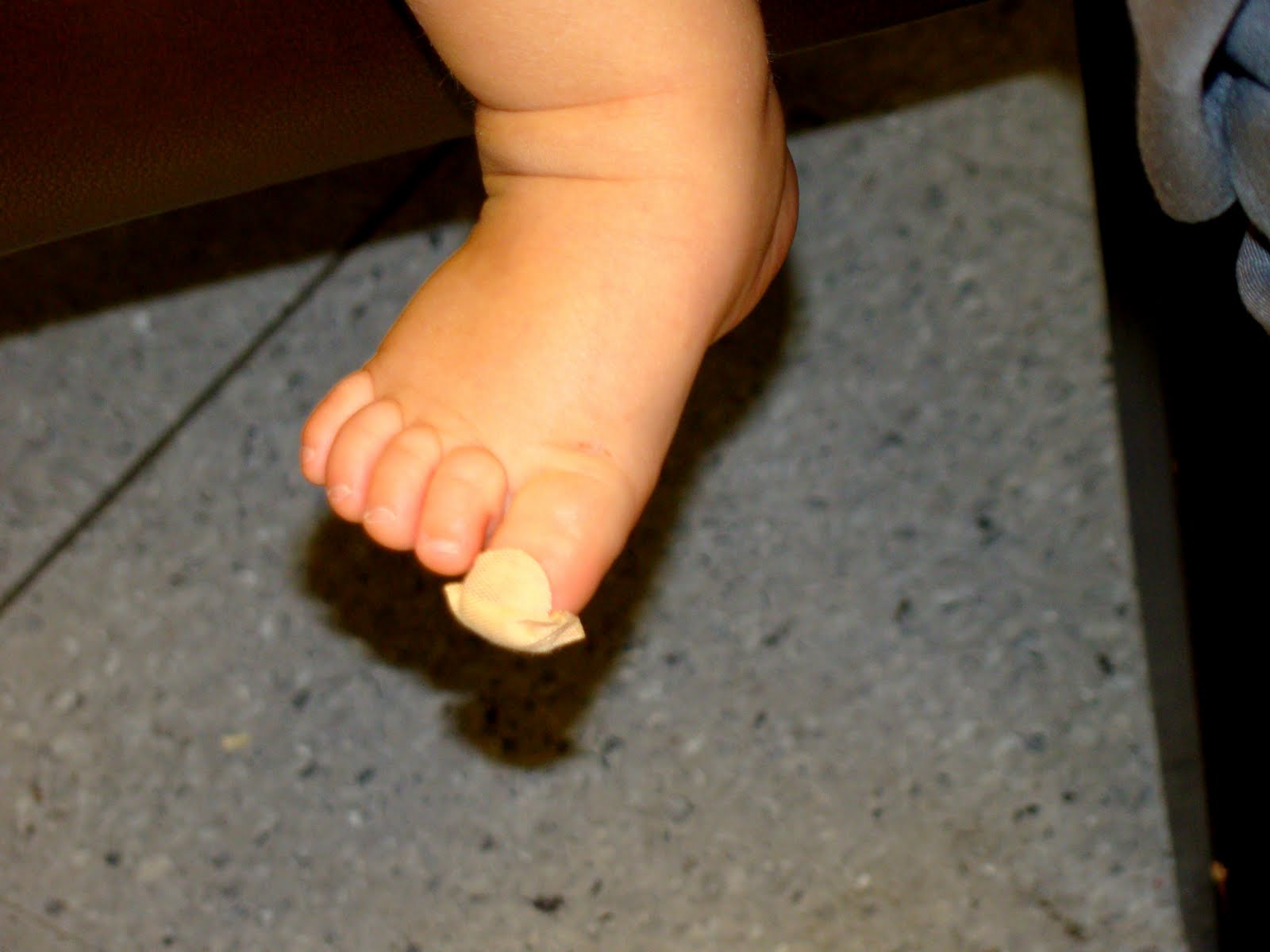 Along the lines of Kye realizing what shots are, he’s also realized what getting a hair cut is. We took him later that  week and physically had to HOLD HIM DOWN to cut his hair. He was bawling. Nothing helped. Not singing, not paci, not candy even! It was so, so sad and I felt beyond embarrassed! We think he freaked out because he hates having the hair on him and feeling that itchy feeling. After the cut, Zach bathed him there at the hair cut place and hopefully that’ll help him behave better next time by not having to stay itchy the whole way home in the car.

Anyway, other than the shots the rest of his appointment went great. I asked her about his toenails because the seem to still be kinda attached to his skin rather high up and I worried that he’d get ingrown toenails. She said that it takes a long time for their nails to grow out like ours do and that I should just make sure to round all the edges when I cut his toenails so he won’t get ingrown ones. Every time we go to the dr I ask about his little vein across his nose that has been pretty noticeable since birth and every time they tell me that it’ll probably fade with age as his skin gets darker. I also always ask for them to look at his bottom teeth and how they are slightly discolored and she said again that it’s probably from him having a fever when the broke through. I know I always get the same answers but I’ll keep on asking every time anyway!

Another great pediatrician well-visit! Hopefully we’ll luck out and won’t be back up at the dr. office until his 24 month appointment 🙂