Zach’s birthday this year was pretty much all over the place! It all started a week or so prior to his birthday when Mom told me she was shipping his birthday gift early. I came home one day and saw the gift on the porch and knew it was a little too big to hide for his birthday so I let him just walk outside and “open” it. I took this video from Mom so she could feel like she was here for the big reveal 🙂

He LOVES the ladder! 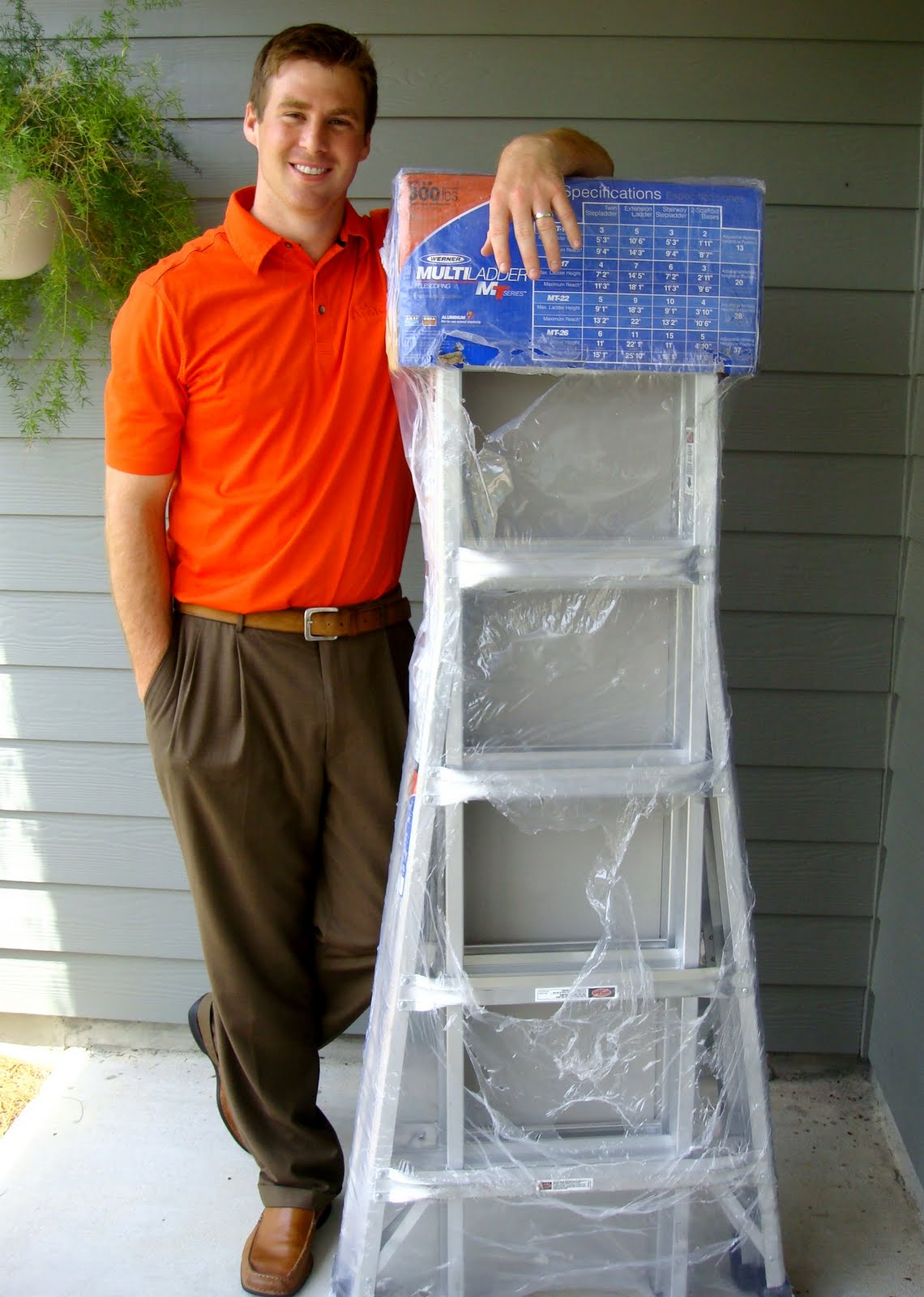 This year was exciting because Zach’s birthday fell on a Saturday (August 7th) and doesn’t everyone love their birthday to be on a weekend? We would have been pumped about it but it turned out he had to WORK! It’s rare for Zach to have to work on a weekend but this one Aflac group requires it and it’s for real worth the dough. So we opted to start the celebrating early! Friday morning we went wherever Zach wanted for breakfast as a family. He chose Cracker Barrel which I’ve basically hated my whole life. Haha. But hey it was HIS birthday 🙂 I couldn’t stop thinking about Uncle Spear the whole time we were there and how we used to always eat there with him. It was cute to see how much Kye LOVED the little peg game thing and I can just picture Uncle Spear making jokes about how much Kye’s mommy hates Cracker Barrel but how much her son loves it 🙂 I love chances to remember him so it was a nice thought! 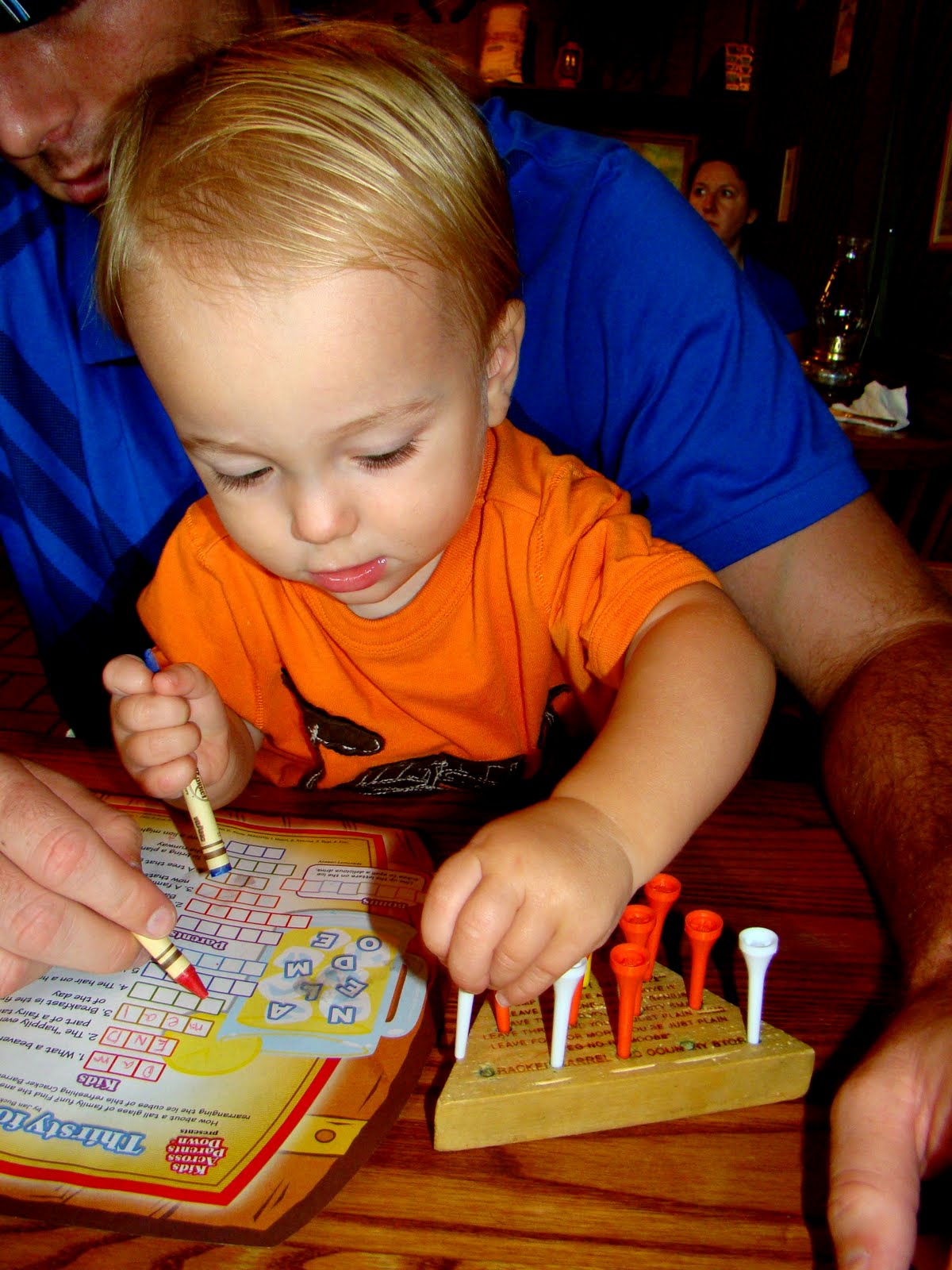 Zach is lookin’ nice and tanned…you can tell he was workin’ out in the logging woods that week! 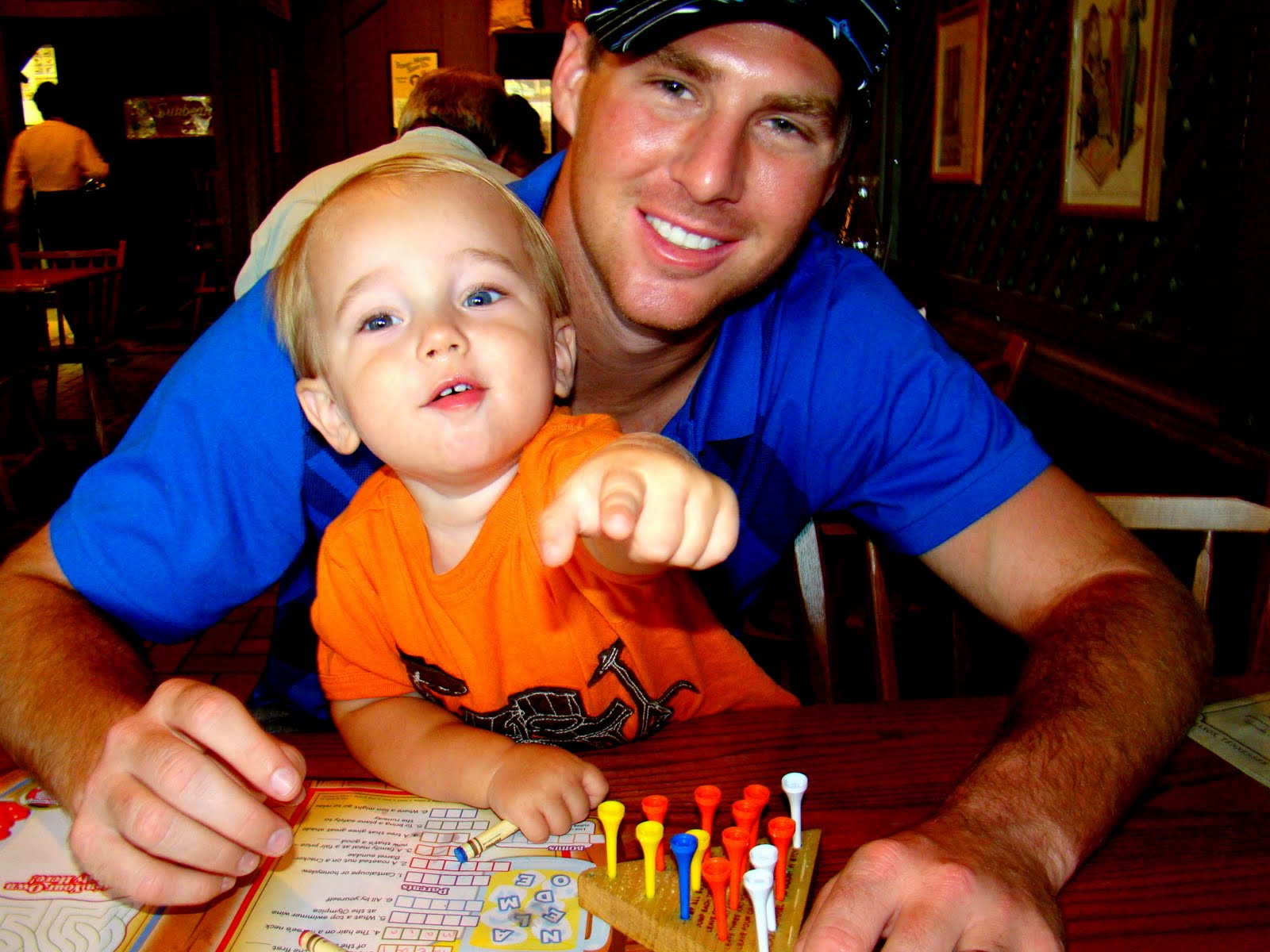 Friday night we had Zach’s family over to do their birthday celebration with him. We opted to have it at our house because Kye goes to bed so early and we thought it’d be fun to be able to play games and hang out after he was in bed. I’m pretty embarrassed to have company with our house being so depressing and bare so we just ordered pizza and made it a very casual event! After Kye went to bed Mr. Rusty, Jordan (Casey’s boyfriend), and Zach went and played putt-putt while Mrs. Charlotte, Casey and I stayed and had girl talk. Mr. Rusty came back and picked up Mrs. Charlotte to head home and Casey and Jordan stayed until almost midnight with us just laughing and playing games. It was really, really fun! It made me look forward to when they both move here so we can do nights like that more often for sure 🙂

even though we had pizza, his mama made him a birthday cake! 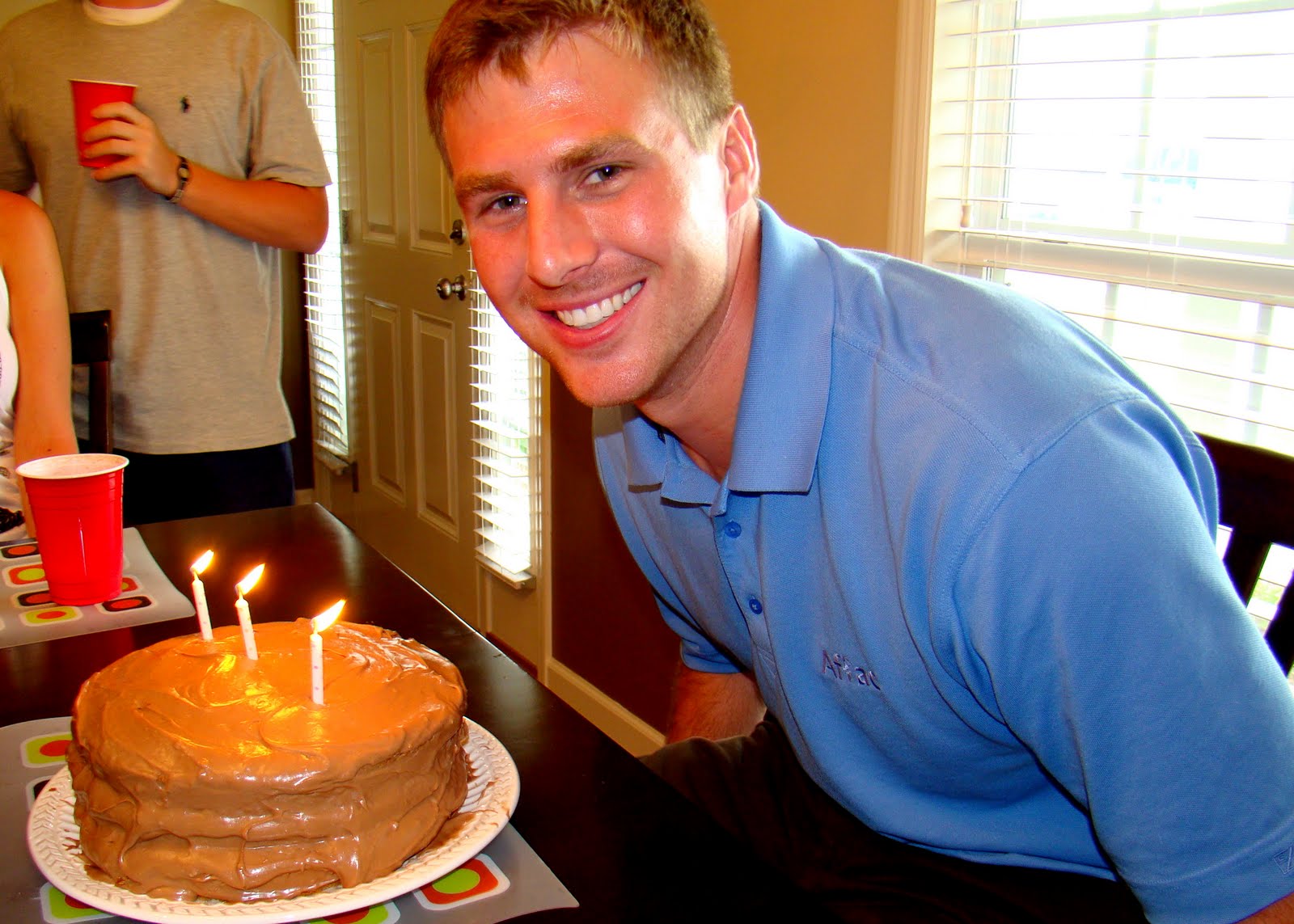 Saturday Zach got home while Kye was napping and I had some Smokin’ Pig waiting for him for lunch and some cocoa-no-bakes (YUM!) waiting for dessert. We watched (what else?) The Office

(started season 4 and I LOVE Jim and Pam together!!!) while Kye slept then opened gifts once he woke up. I seriously hooked Zach UP this birthday! I’m so proud of myself for how awesome I did!!!

same wrapping paper as last year – gotta save that dough 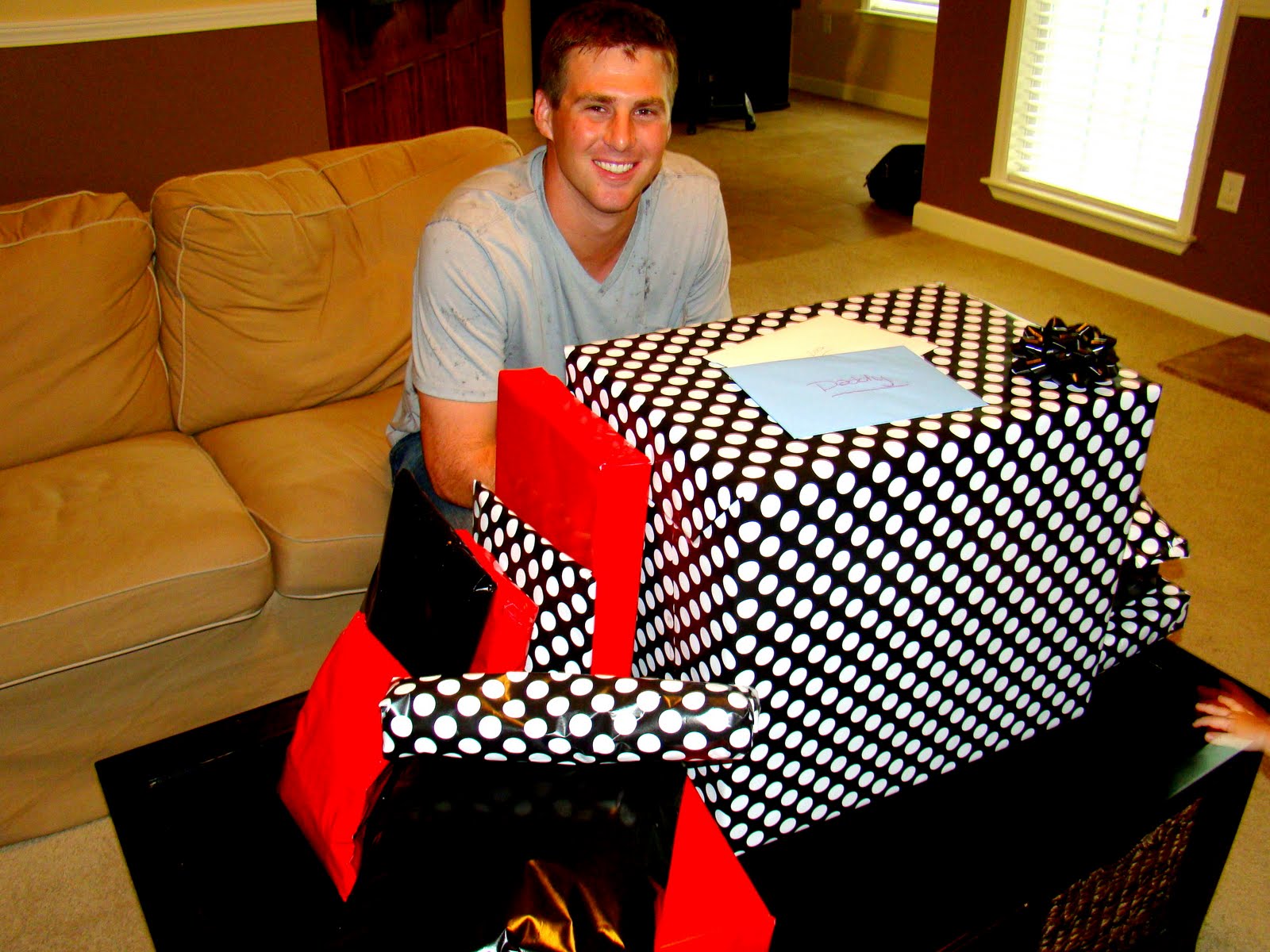 I really had some great birthday gift ideas that I was excited about! He drives a Ford Flex and we LOVE it and I thought it’d be cool to buy the fridge they make for it since Zach is in his car all the time and we travel a lot. Well, it was $750!!! So I hunted online and found an awesome car fridge for under $150 and you can take it into hotels too so you KNOW we’ll be usin’ that junk! Look how shocked he is…I don’t think he could figure out what it was. 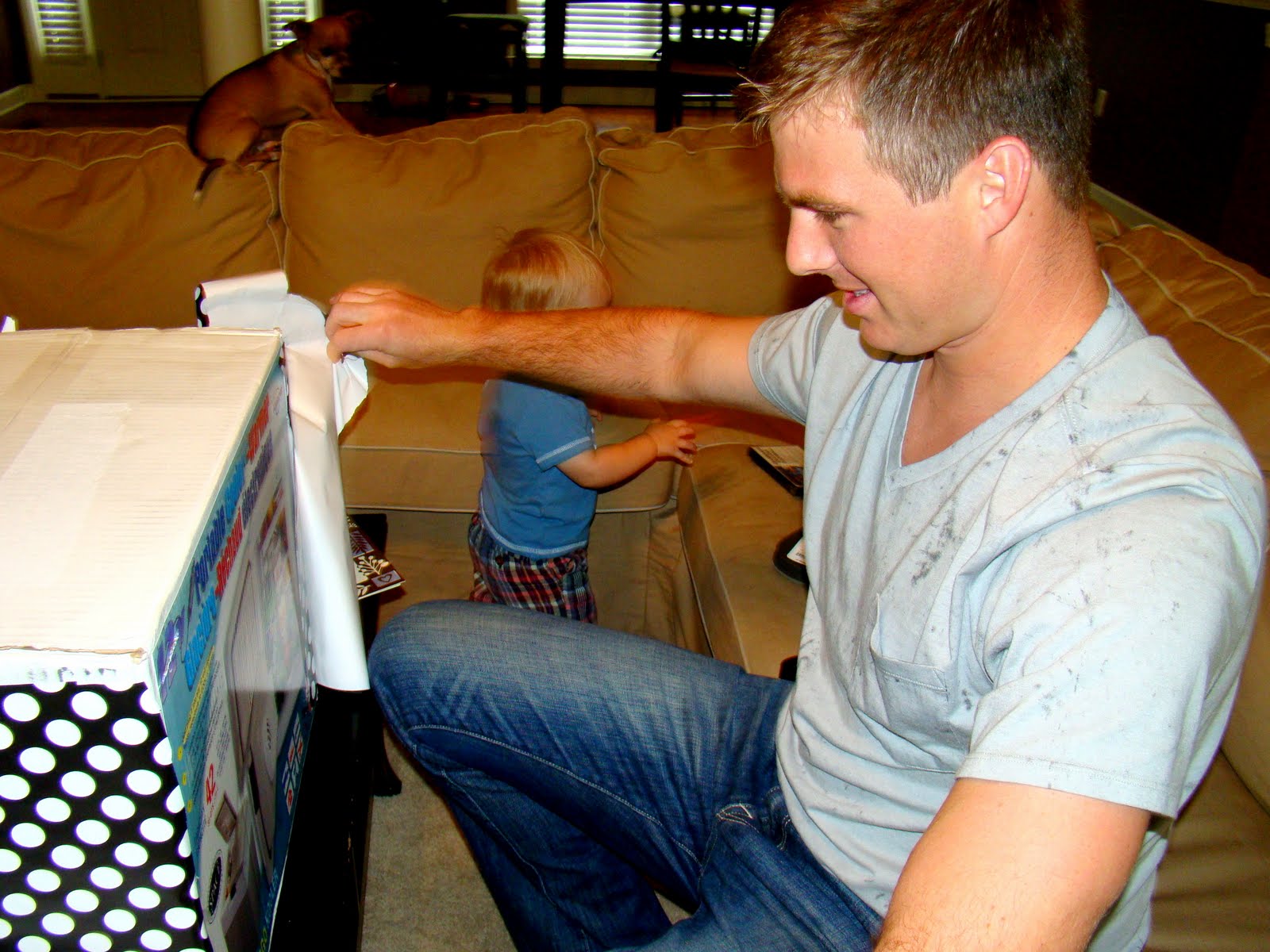 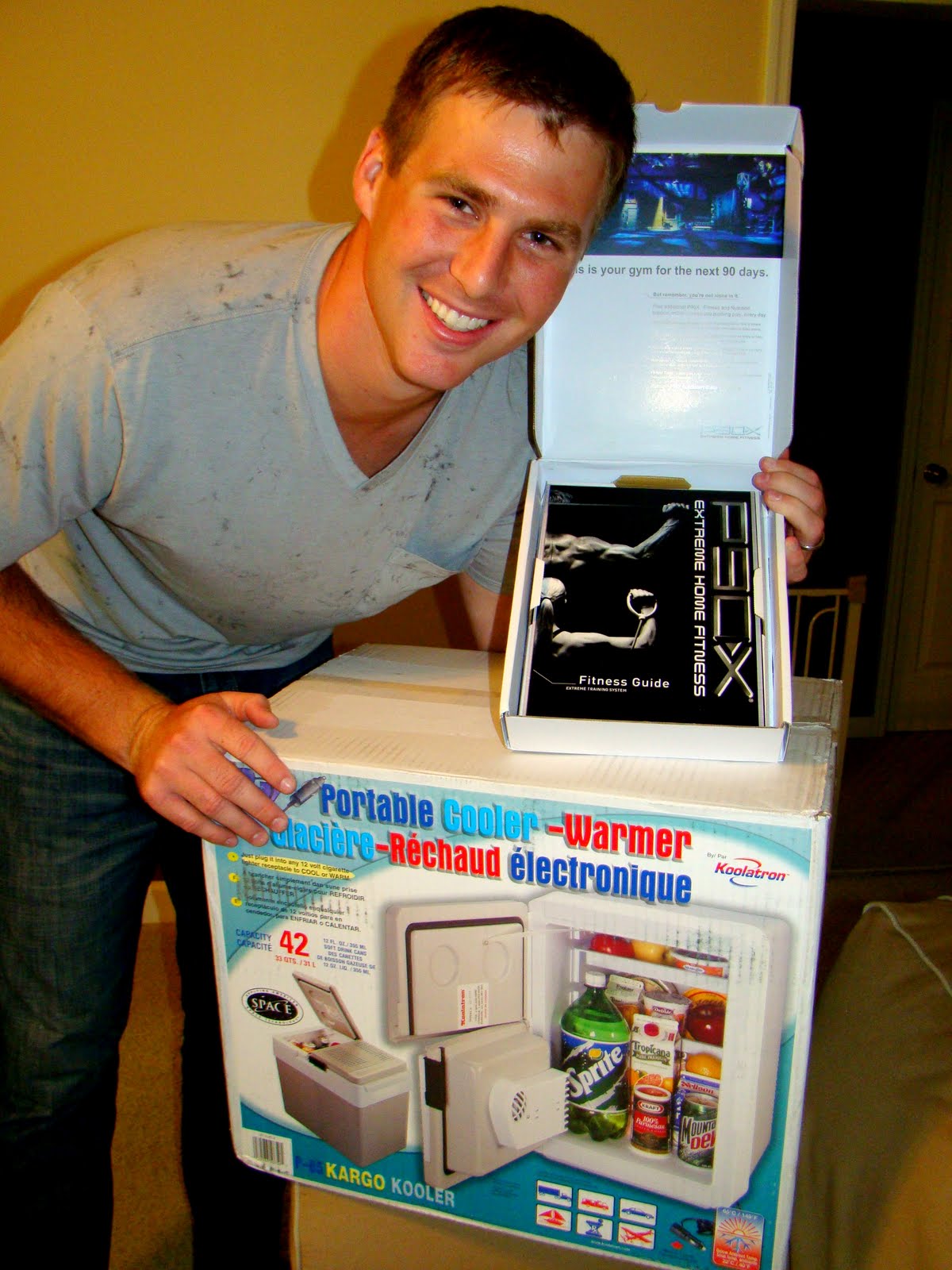 display of gifts! (he got the v-neck shirt for his bday, what does everyone think? sexy or gay?) 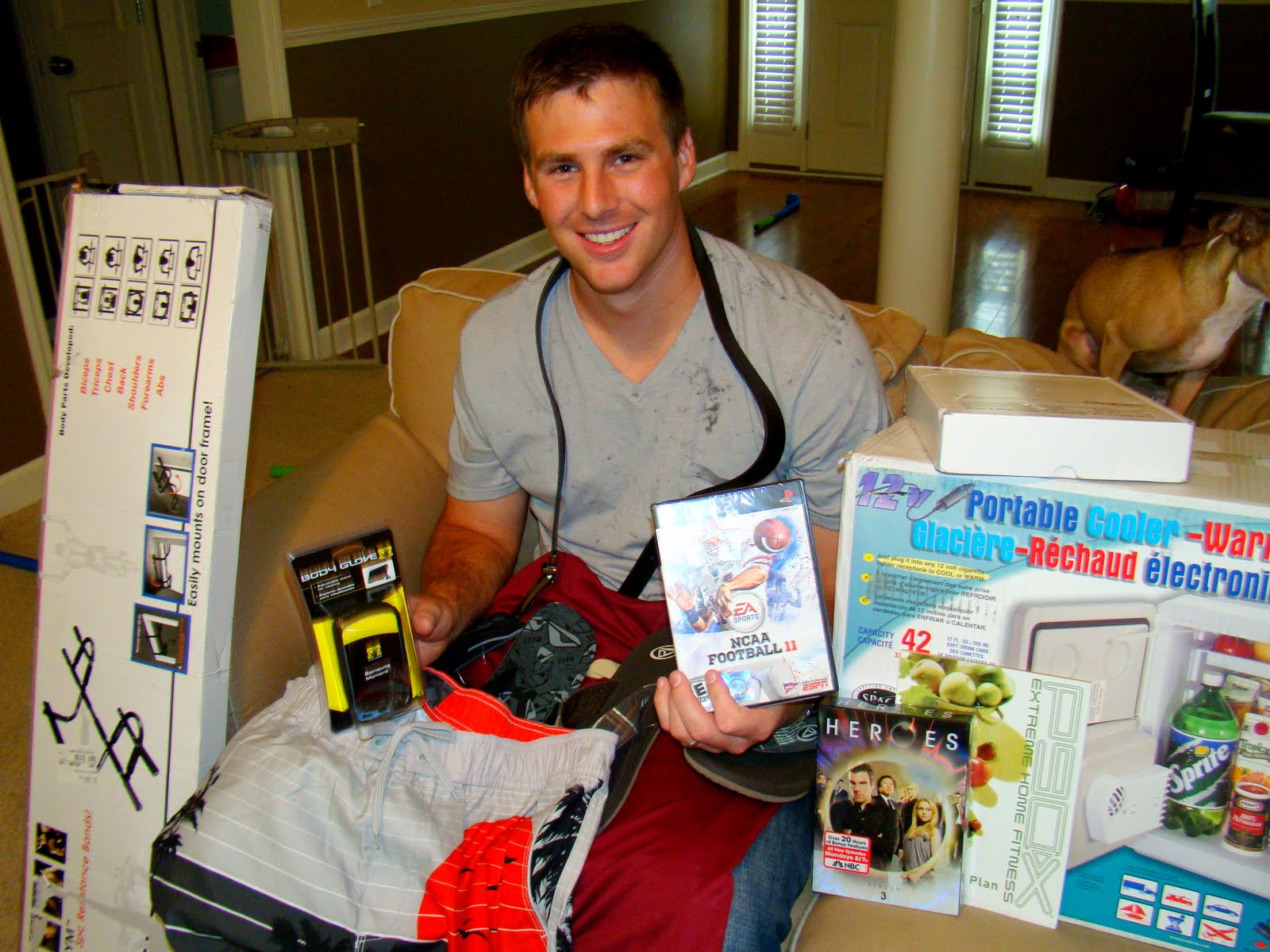 That night we went to Aligatu, our fav Japanese restaurant, for dinner. Early on in the meal Kye grabbed Zach’s soup and burned his hand 🙁 Luckily, it wasn’t a bad burn but the evening was OVER. Kye was so afraid of the table that he wouldn’t eat or stay sitting down. It’s one of those places where they cook at your table and it’s pretty pricey so I was beyond annoyed that it was all ruined and that we had to bring almost our whole meal home for leftovers 🙁 Boo!

is my husband not SO hott?!?! Seriously? 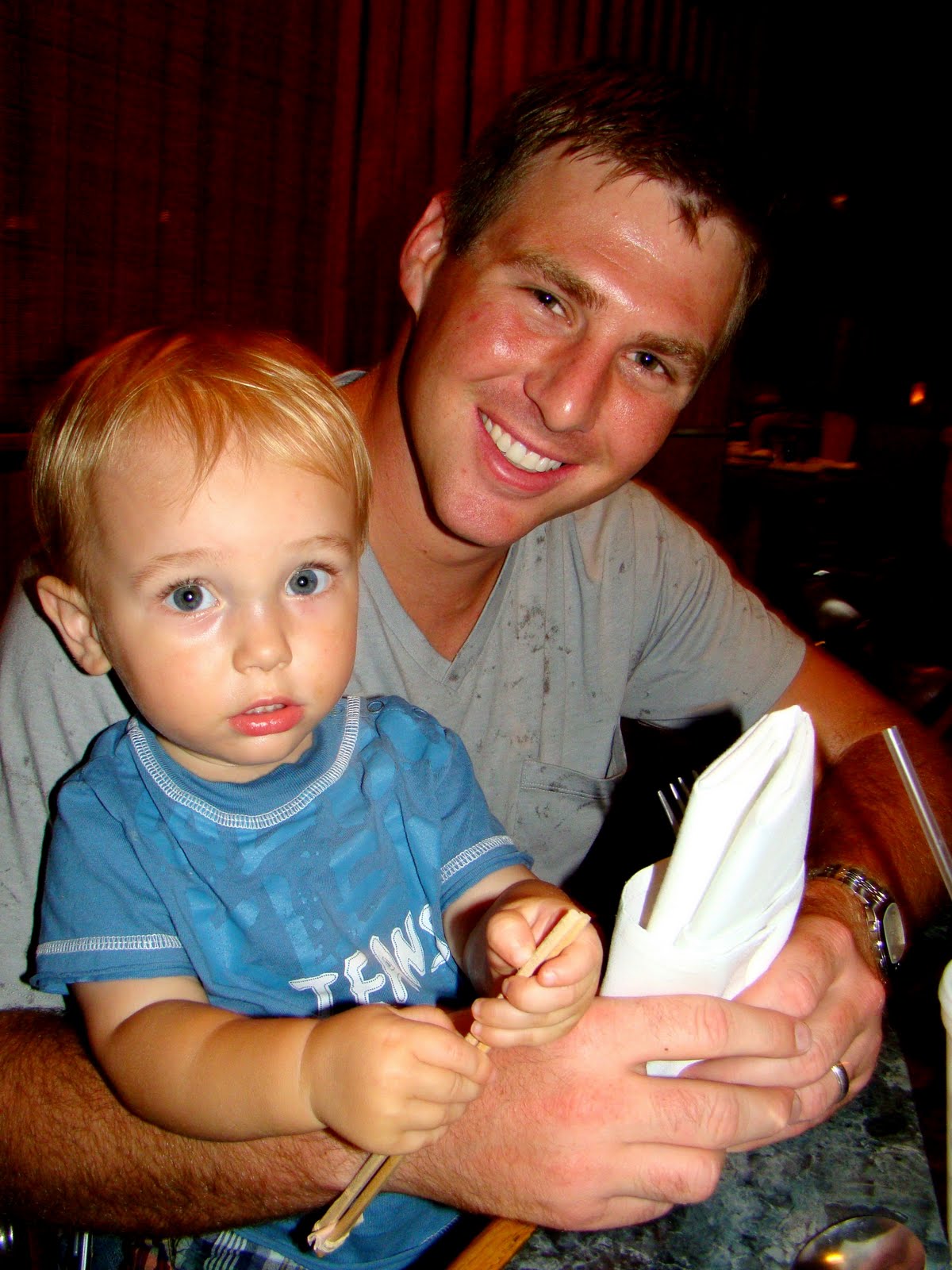 …I’ve decided that Zach’s dad is the white Denzel! Does anyone agree on that? It was pretty good as I managed to only fall asleep during parts of it.) and pigged out on cookie cake! 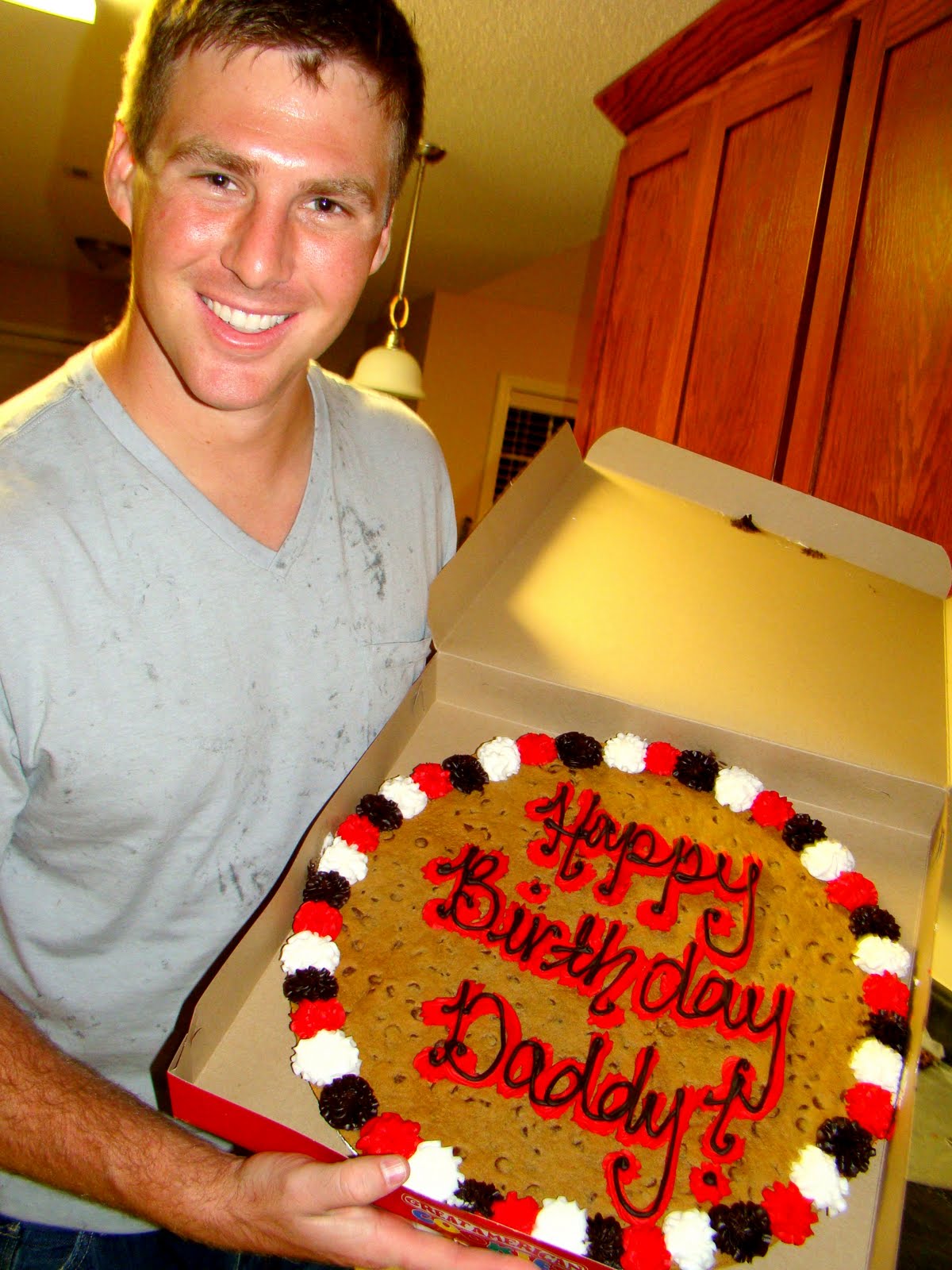 Sunday Zach was supposed to drive to Macon to work ANOTHER Aflac group but it got canceled 🙁 So he was home which was nice! I had already volunteered to work the nursery at church (which was quite an adventure) so he got to enjoy services without Kye which was probably very relaxing and enjoyable for him. We didn’t really do any special celebrating for his birthday on Sunday since he was supposed to be out of town but we did get to go visit the Megows and see my Titus so it was fun!

Monday night the celebration came to an end with a final birthday dinner. We met Katie and Ashley up at Texas Roadhouse for dinner and it was great! They have a new special for $7.99 entries if you order before 6 and it happened to be kids night so kids meals were $0.99. Um, AWESOME! It was such a fun night which is rare for celebrating Zach’s birthday with our friends (it seems like every year something goes wrong for poor Zach, but not this one!). 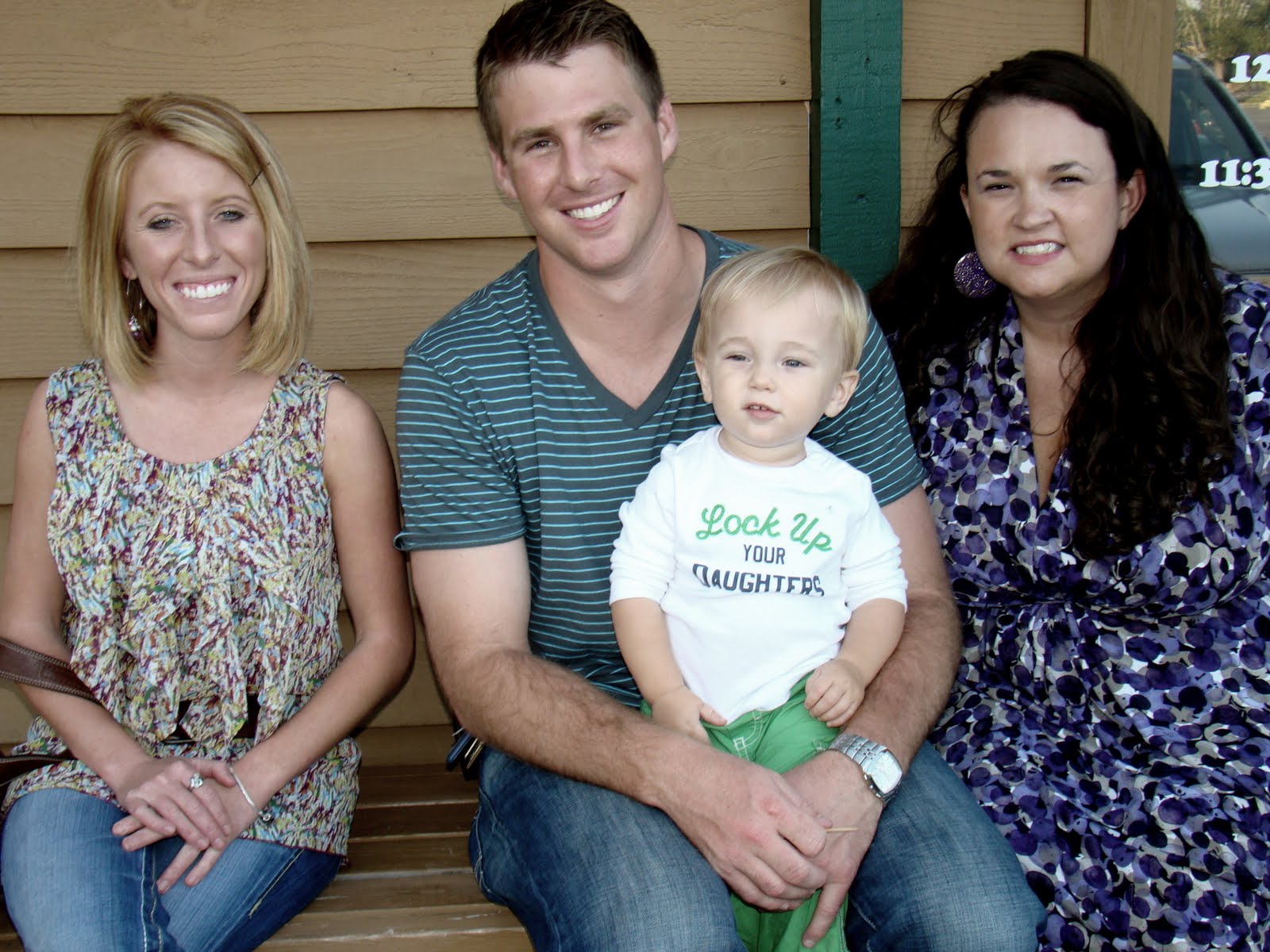 I had to get in on one too 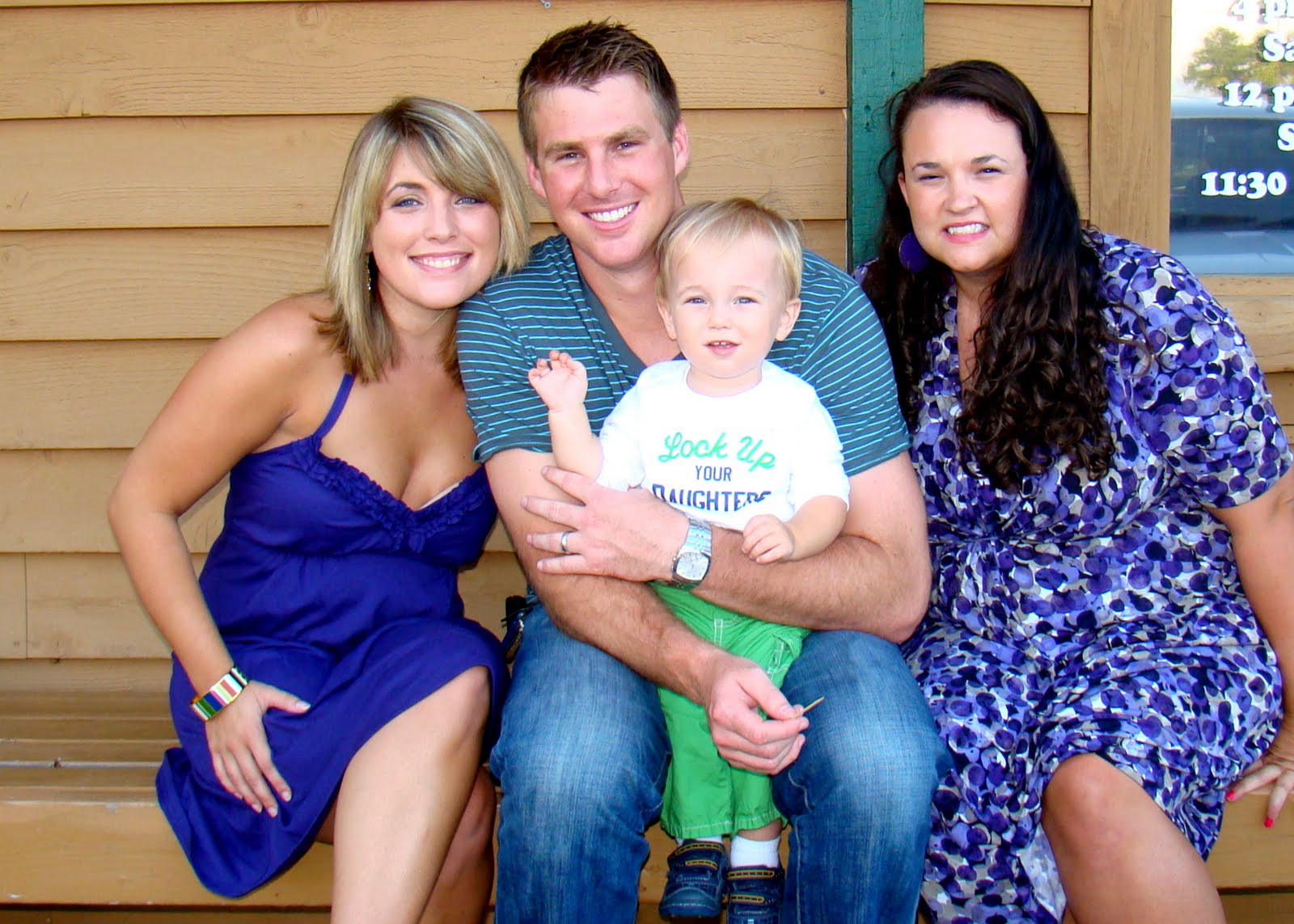 SO great to spend time with these girls 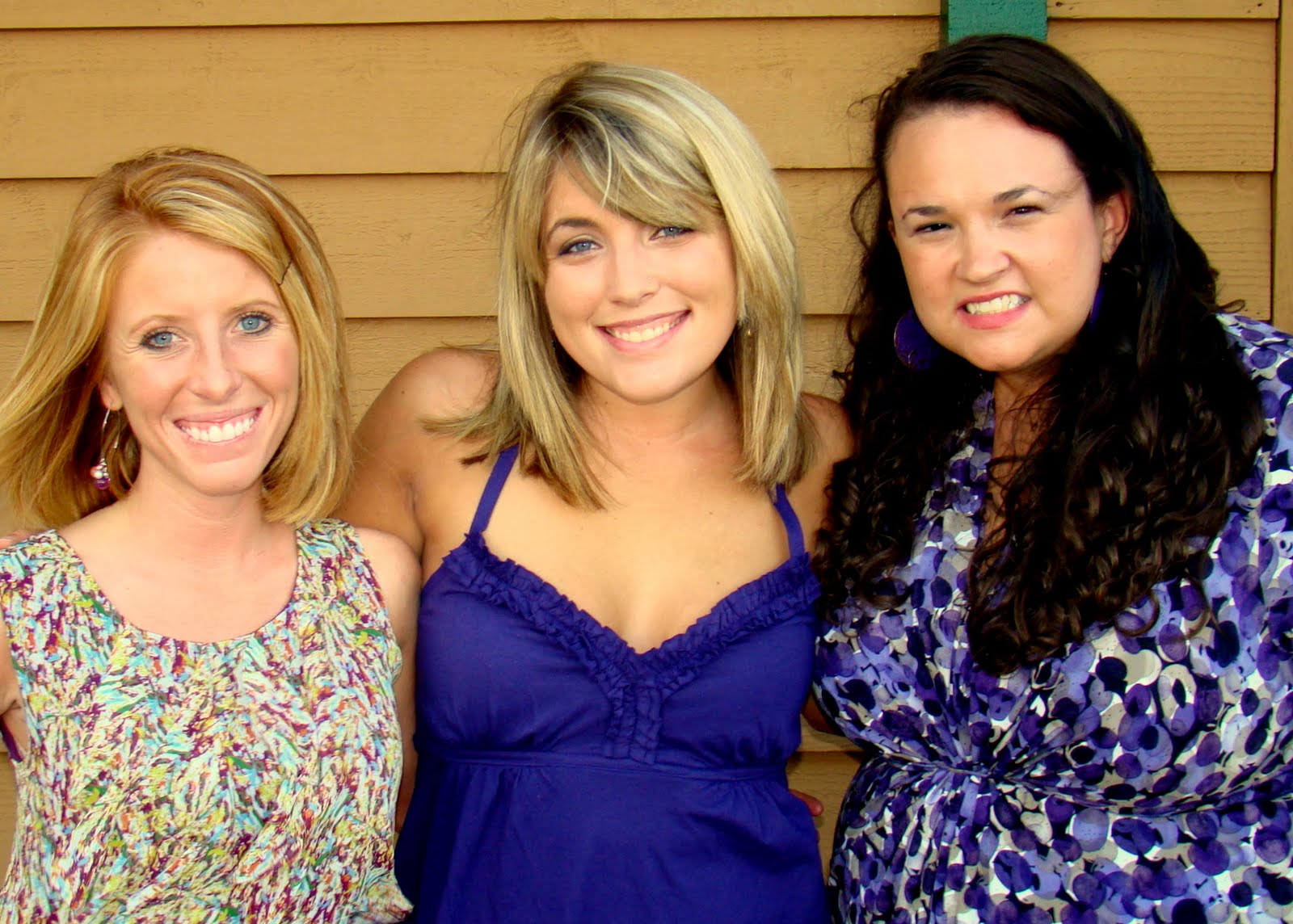 We used to have game nights on the reg but lately we just haven’t had them and it was SUCH a great time! Just like “old times” laughing and being silly and just being US. I loved it and I know Zach did too. If you read this blog then you know my husband wins everything all the time and the night started out with him winning a round of Loaded Questions

(you can tell we all know each other SUPER well because NO ONE missed a single question the ENTIRE game!) but then Katie one-upped him BIG TIME and busted out a huge Tripoly win 🙂 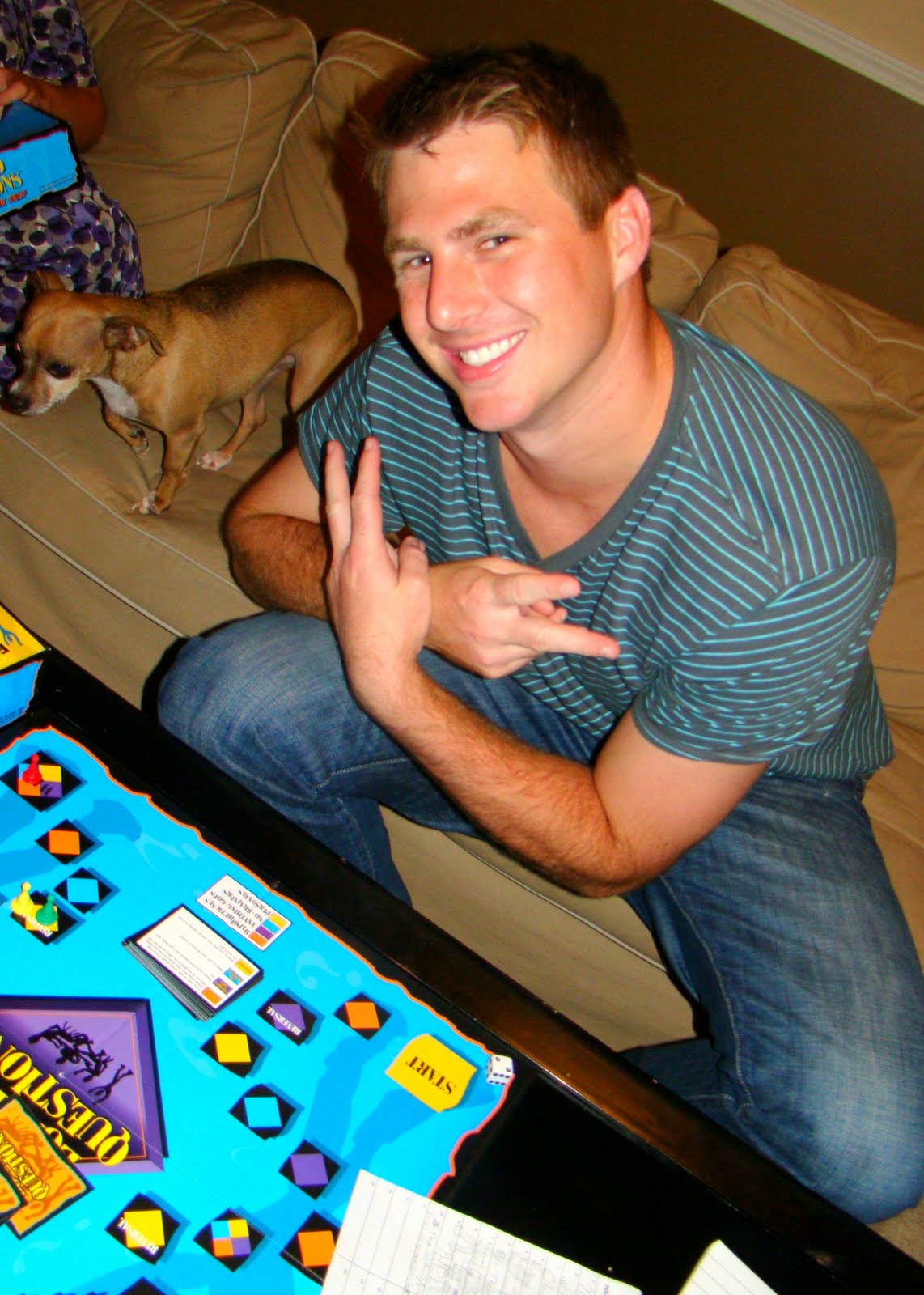 that’s my girl…I love when anyone beats Zach haha 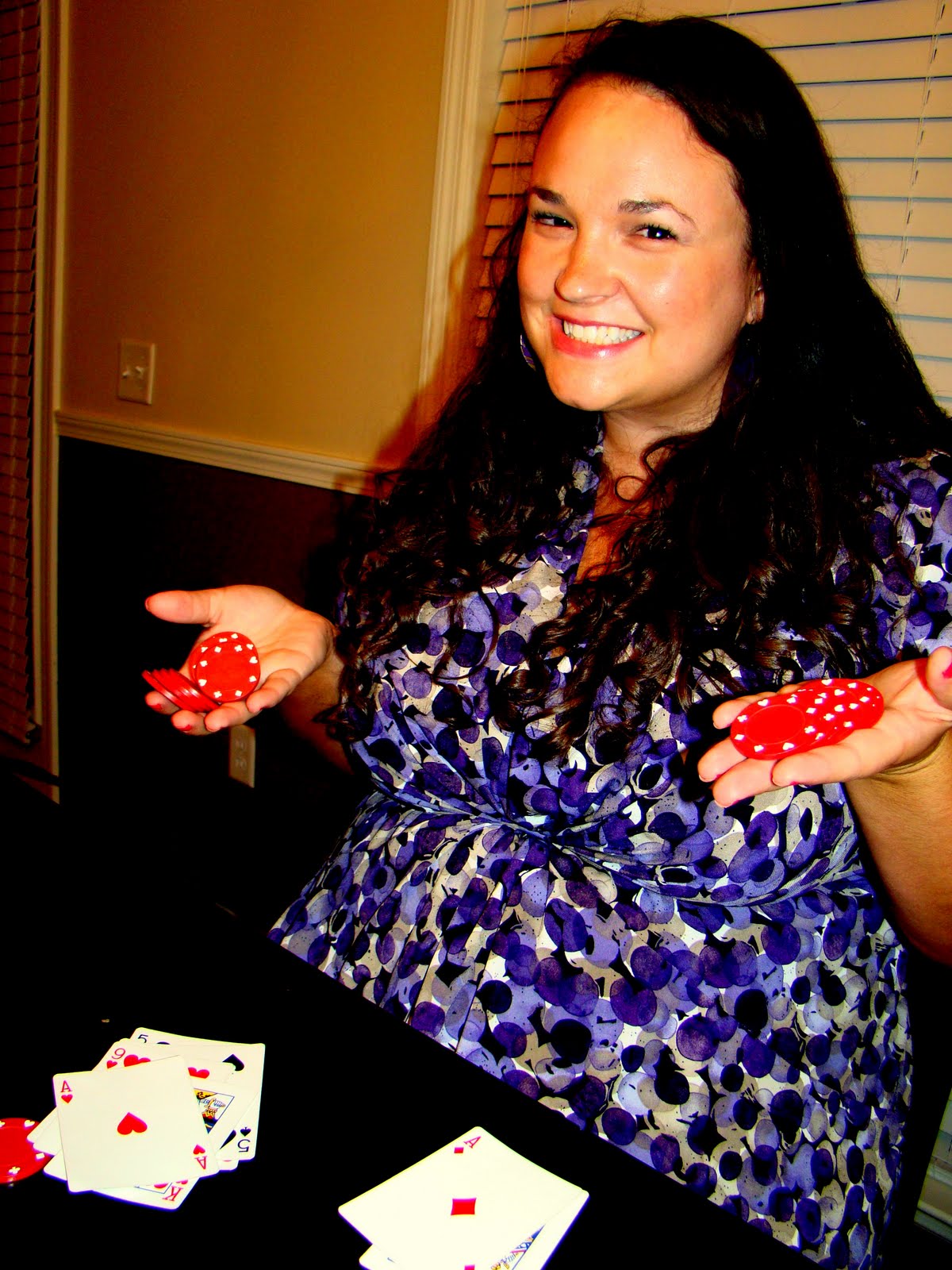 I think it’s safe if I speak for Zach and say he had a wonderful birthday! Now I have 3 months to get used to the idea of being 26 before it’s my turn…