Weaning from the Pacifier

Zach and I agreed that once Kye turned two, we’d be getting rid of the pacifier. Yes, he only EVER has had it during night and naps but we still feel like at two years old he needs to be a “big boy” and be rid of the thing. Pacifier weaning was not something I was looking forward to handling but I read up on it and came up with a pretty solid strategy!

I know many parents will wean from the pacifier cold turkey (Zach’s parents often tell the story about his dad tossing out the car window) but I prefer transitioning my children and wanted to make the process as smooth as possible for us all.

I decided to wean Kye at these of toddlers to avoid any issues the pacifier may cause with his teeth and at 24 months old he’s better able to reason and understand cause and effect so I was hopeful that he’d be able to connect the dots and say “bye bye binky!”

A baby wouldn’t understand the pacifier changing or going away but a 2 year old toddler can!

I wasn’t looking forward to it and originally planned on taking him to Tallahassee for the day and using his pacifiers to make a Build-A-Bear (I’ve heard they will use the pacis when stuffing the bear so the kid can still kinda be sleeping with their pacis).

I really liked the idea but started doing some research and found something even better. This article (called Bye-Bye Binky, which you can read here) goes right along with my style of parenting.

The goal is to get rid of the pacifier so why not achieve that goal by having your child actually choose to be rid of it?

I thought it sounded brilliant so on Monday March 7th I poked lots of little holes in all three of his pacifiers. He didn’t even notice at all!

I planned on following the guide through, but decided to do a speed-up version. I’ve always been like that with my child and transitioning – I just kinda do it and do look back. Since he didn’t notice the holes I cut off the tips of the pacis. I cut them when he wasn’t around so he had no clue I did it! 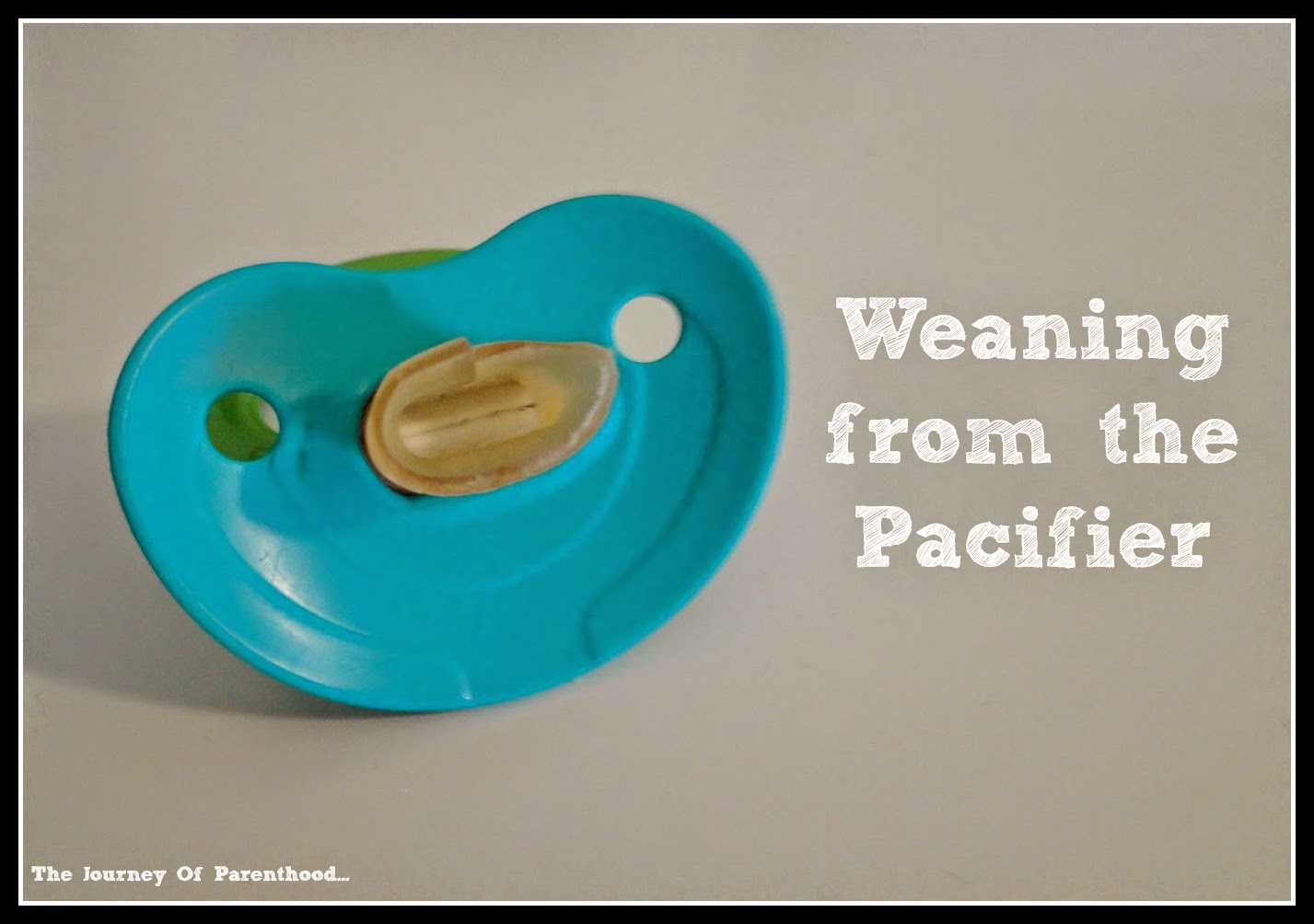 He may not have noticed the little holes, but he DID notice the tips being gone. He was very upset and sad and kept pointing at the tips and saying “paci broke” over and over. He wanted to throw them away before his nap but then took 40 min to fall asleep and only napped for 45 minutes.

He was bawling and I ended up going in there every 10 min until nap-time ended. I talked to him and reminded him that the paci broke and that he threw it away and even got them out of the trash to remind him.

I felt it was important to give him a new comfort object and thought it’d be fun to take him and let him pick out the new toy so after “nap” we went to Toys R Us.

He had a BLAST playing with all the stuffed animals but did not understand the concept of bringing them home with us. He’s NEVER gotten to buy things at the store and I’m thankful for that as it makes our outings easy going and fun as I don’t have to constantly make him put things back or tell him he can’t buy stuff. 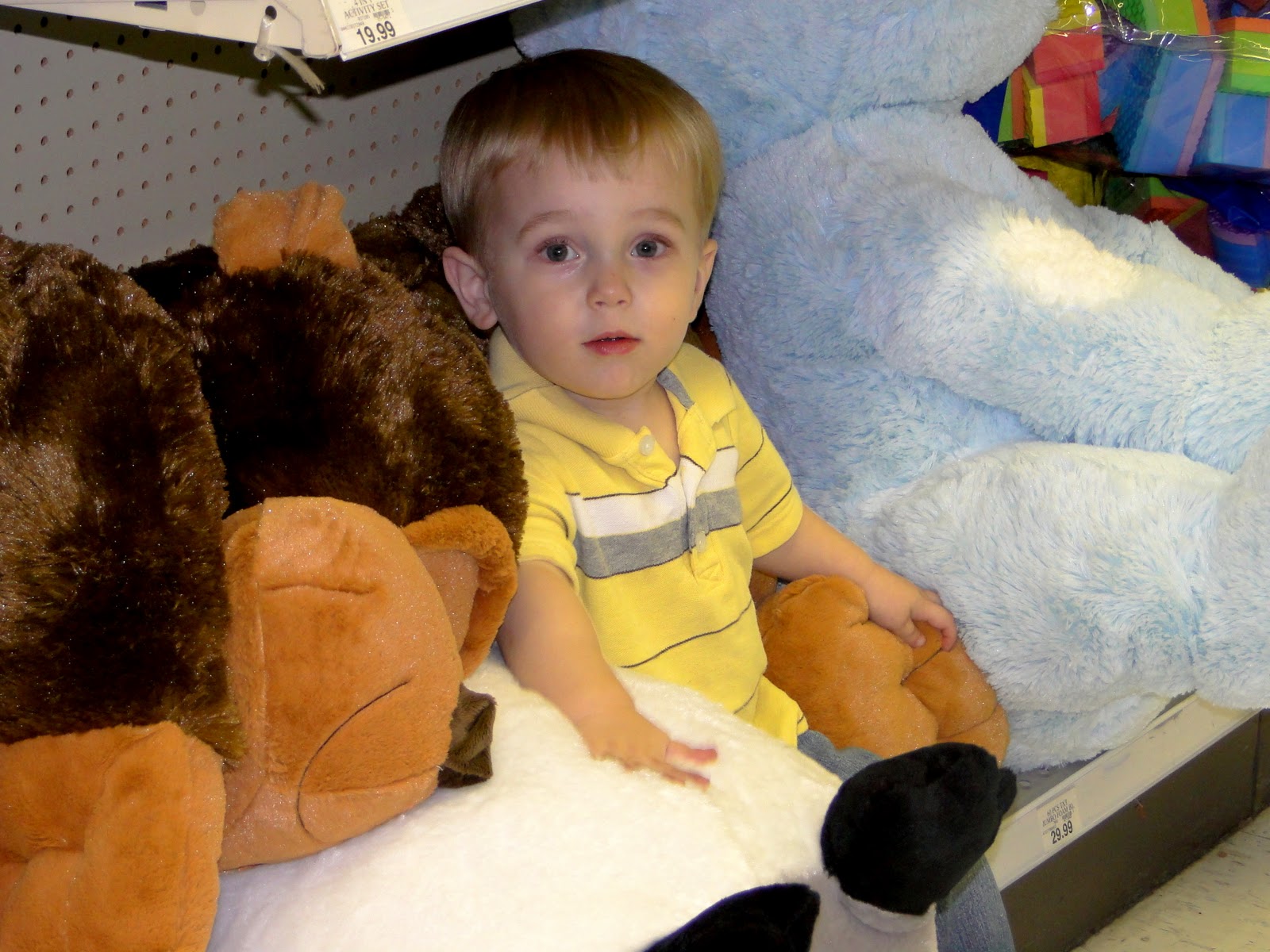 After 30 min or so of playing with the stuffed animals I ended up just picking one out for him! I picked the most cuddly, yet boyish, one I could find and Kye seemed to like him right away! We talked to him and fed him snacks. 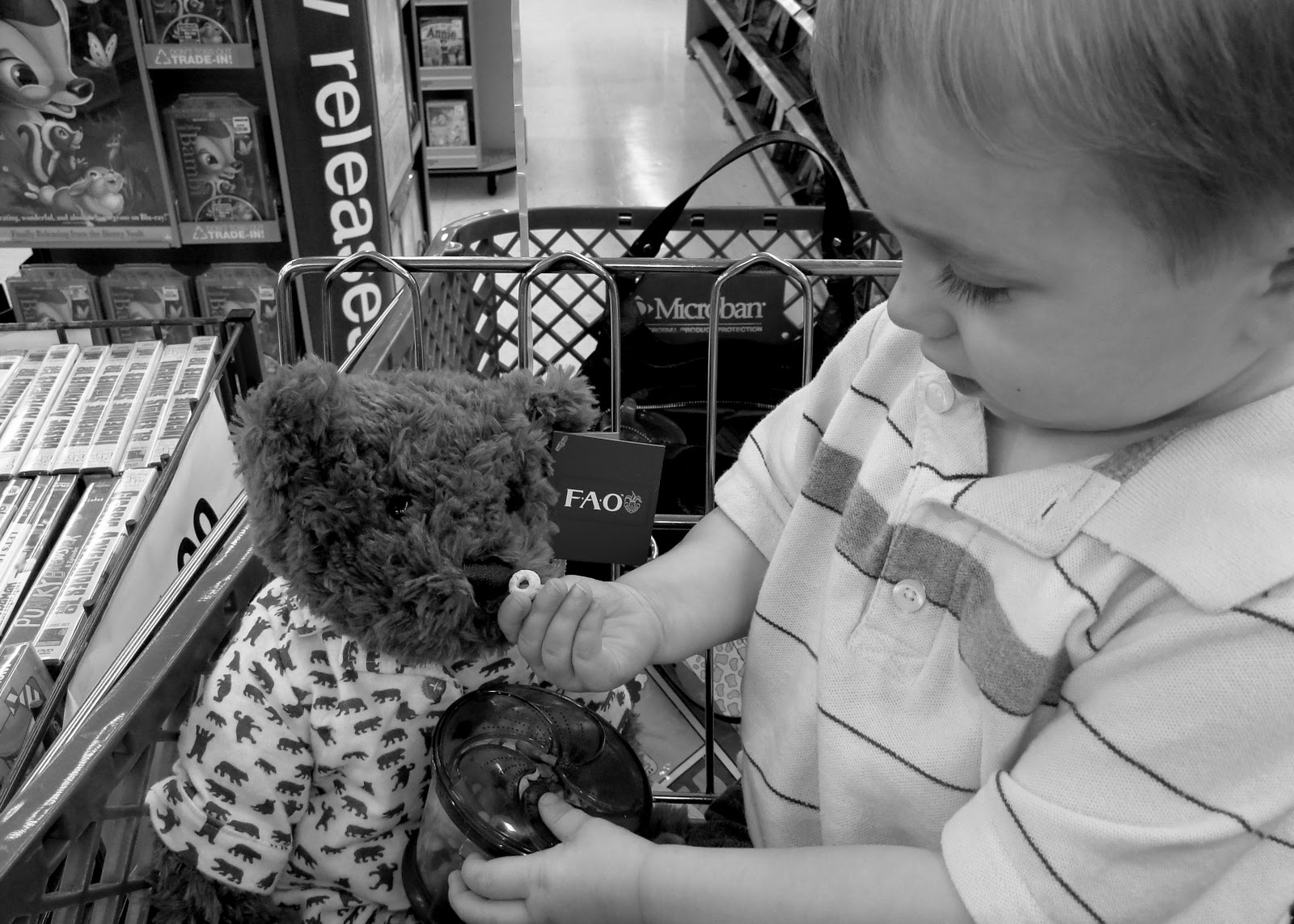 He was WORN OUT after the tough afternoon of sobbing and not sleeping but it was so sweet of the people at Toys R Us to help me in my paci project. They did his birthday goodies for him and helped talk him up about what a big boy he is now that he doesn’t have a paci! 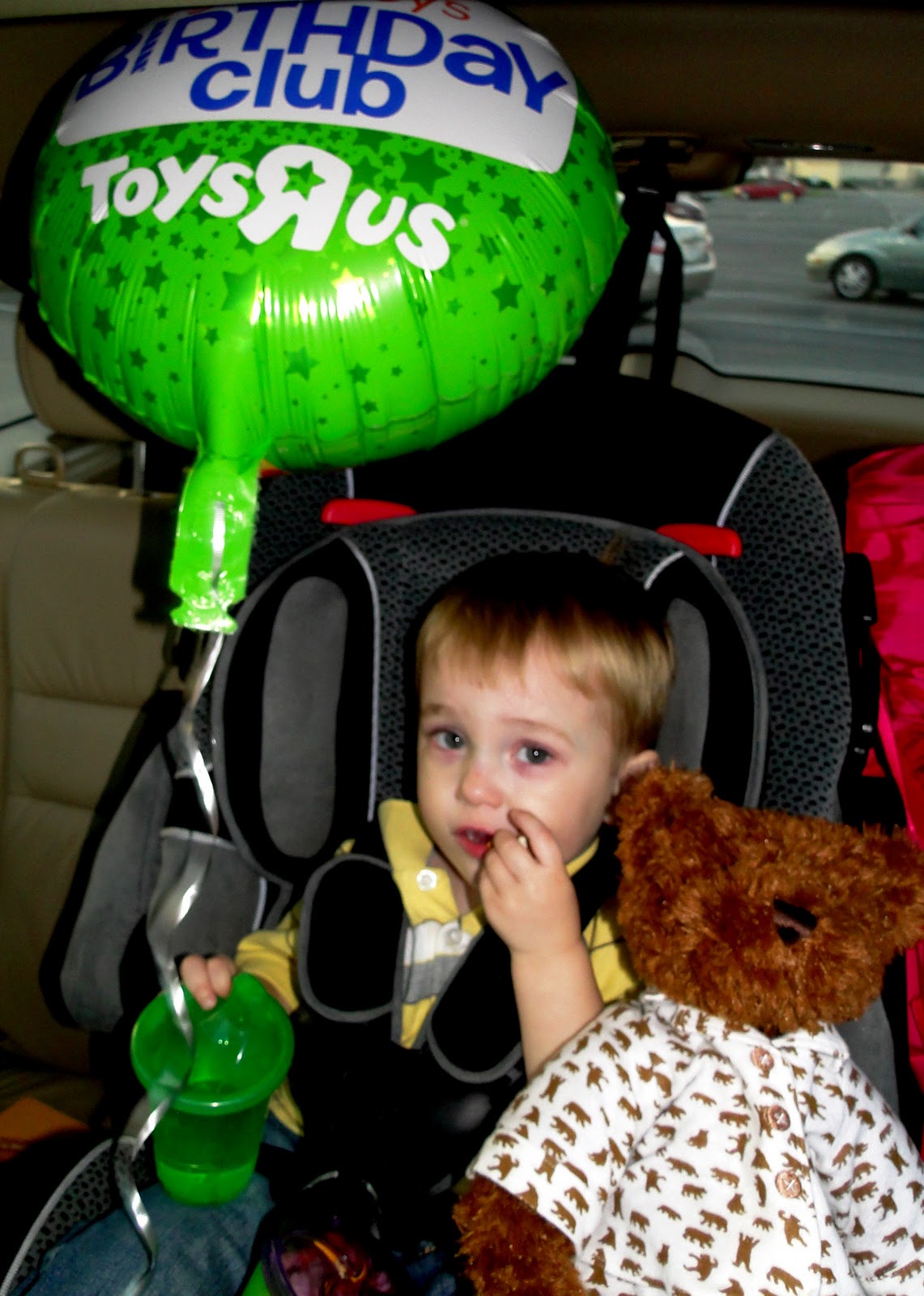 We named the bear “b-ba” because Kye is very into letters right now and goes around the house saying “B-BA” all the time. He really enjoyed playing with B-Ba but when it came time to go to bed he didn’t want him. He actually REFUSES to sleep with him and will pitch a fit if we try to put him in the crib with him (what a waste of $10!). 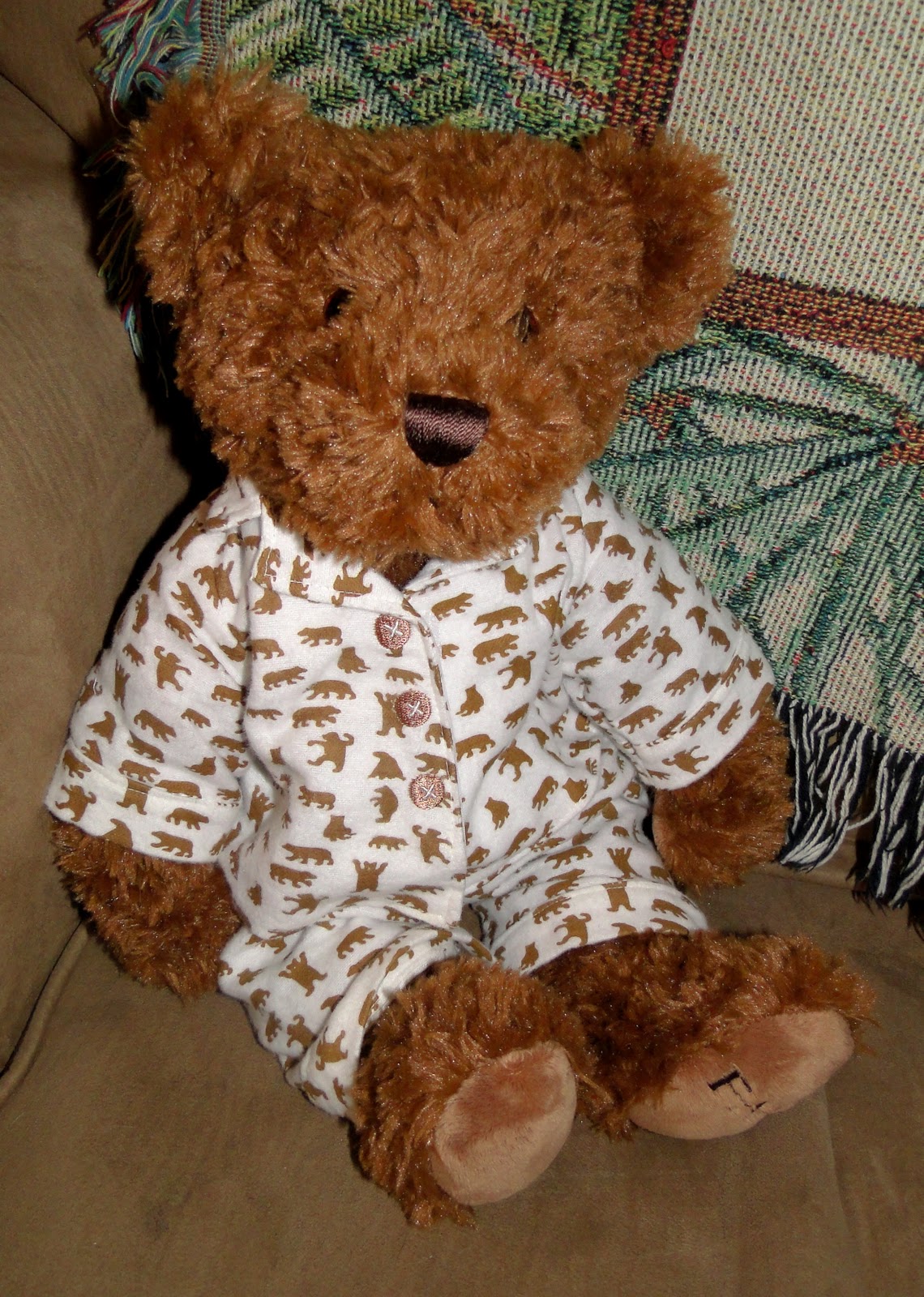 That night Zach was with me to put him down and got to see how heartbreaking it is when he realized the pacis were gone. We ended up getting them out of the trash (and I cut MORE off the tip) and put them in there with him.

Our thinking was that he’d be able to remind himself that they were broken. We checked before we went to bed that night and he didn’t have one but in the morning he was chewing on one of them.

On Wednesday we ran errands and he was the WORST behaved he’s EVER been. I had to discipline him at the mall – twice!!! While it was tough dealing with him, it’s also proof of what I tell people who think my kid sleeps too much – a well rested child is a WELL BEHAVED child!!!

For his nap I cut even more off but still gave him one of his pacis (his favorite). He fell asleep right away but didn’t sleep for very long and wanted to throw it away again after he woke up.

Robyn stopped by that afternoon and he was BEYOND embarrassing. It was one of those rough days and that night I told Zach that I was going to church and that he needed to stay home with Kye. I needed a BREAK!!!

Before putting him down Zach cut the tip of the paci long ways as well as shorter so it was very uncomfortable in Kye’s mouth that night but he still slept pretty good (he’s never been a perfect napper but has always done wonderful at night!) 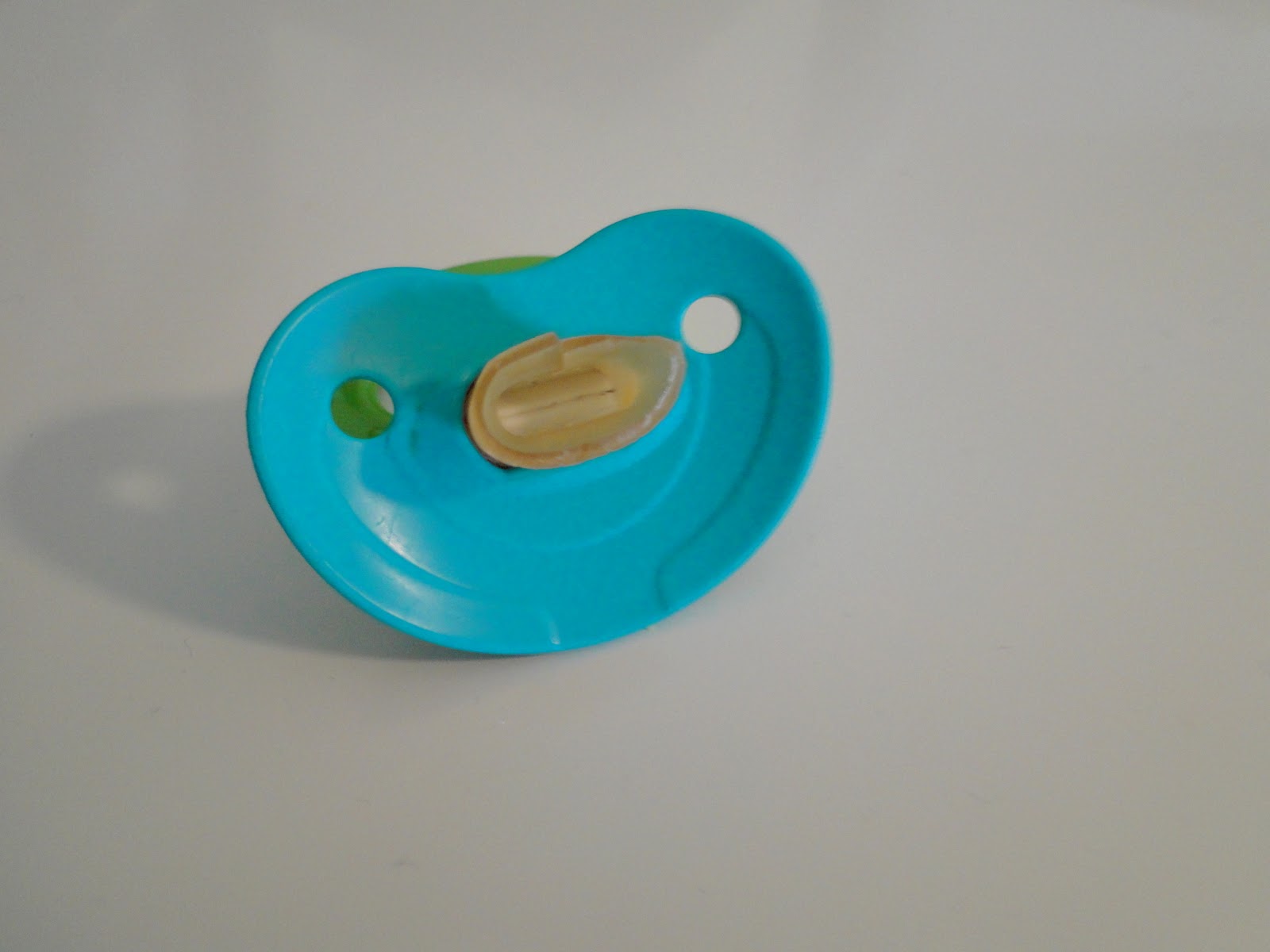 By Friday there wasn’t anything let of the paci for Kye to chew or suck on but he still felt comfort in holding it. His naps were still pretty awful and he spent a good 30-60 min crying in his crib. I started to just ignore him and let him cry because I felt like at that point he had to understand that the paci was simply not ever going to work the same way again for him. 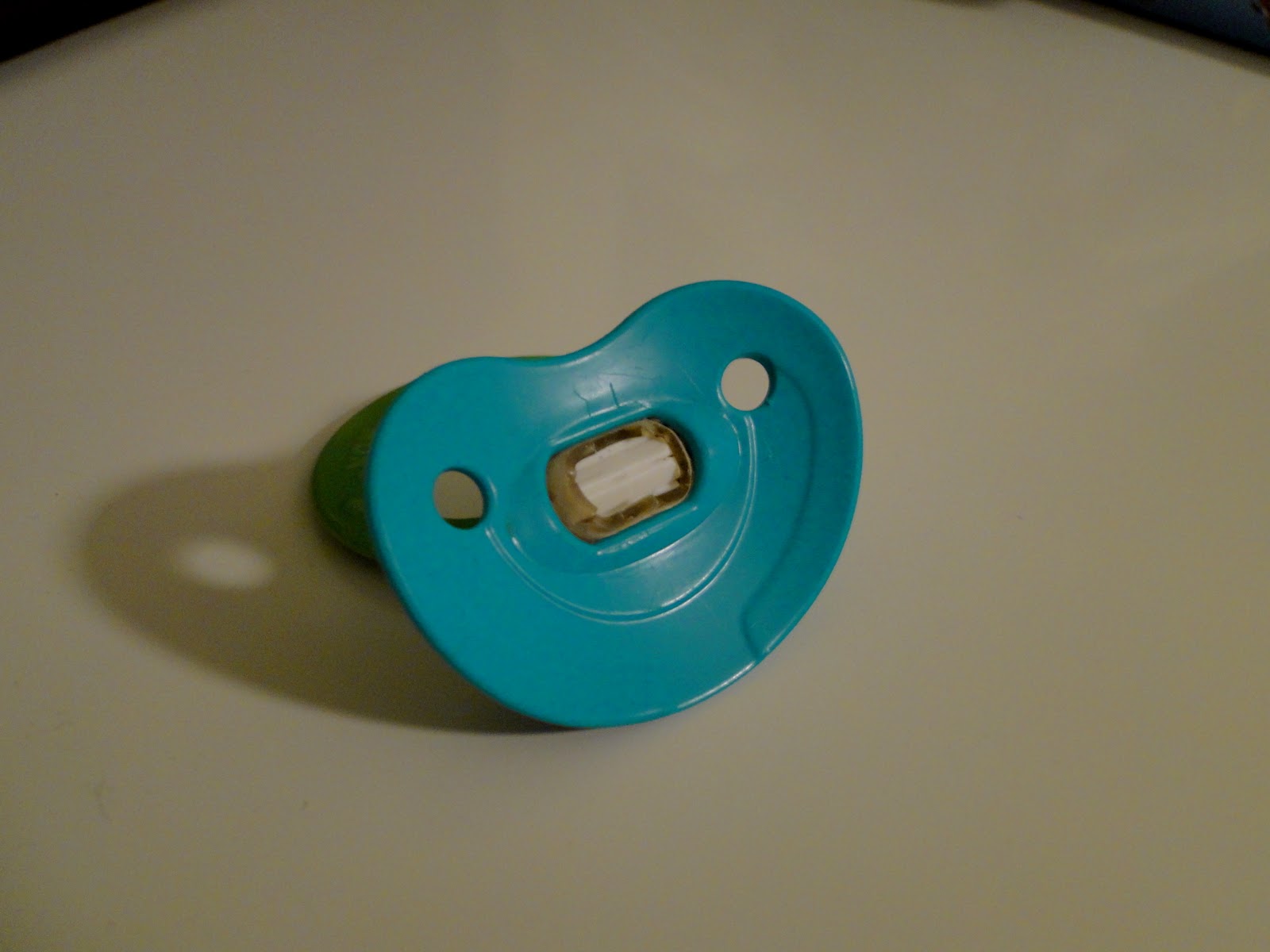 Sunday night (one day shy of a week paci-free!) Kye threw the paci in the trash for the last time. Trash day is Monday so Daddy emptied the small trash cans into the big one and the garbage man took the paci with him.

Kye has a video (Mighty Machines

) that has a section on garbage trucks. I had him watch that portion and said “look! there goes your paci!!! bye bye paci!!!” It really seemed to “click” with him at that point and I wish I would have thought to do that sooner!

Life after paci hasn’t been an easy adjustment, but we’re getting there. He’s been without it for three weeks now and goes to bed 100% like normal at night and sleeps as long as usual…naps he still is typically waking up RIGHT at 3 instead of sleeping until 3:30.

At first I would go ahead and get him up at 3, but now I’m letting him just stay in there and play or fuss at times until 3:30. He needs to get back to knowing that it’s not Kye’s choice when he gets up – it’s Mommy’s and Daddy’s.

Sometimes he’ll even wake up as early as 2 and will just stay in his crib until I go get him. Those naps can be hard as he’ll cry out to me “Mommy! Daddy! Hold you! Out! Pleeeease!” Pitiful!

But I keep reminding myself that he has to learn to self-soothe now that he doesn’t have the paci to do it for him anymore!!!

Although Kye didn’t cling onto B-Ba the way we had hoped, he has gotten attached to THREE objects. His monkey (that he’s always had in his crib with him), a blanket (the Toy Story one Katie got him for Christmas), and a pillow (the decorative one that matches his bedding – he saw it on the chair and kept putting it in his crib over and over and over until we finally gave in and let him sleep with it).

We have always been HARDCORE about him keeping his monkey (and pacis) in the crib. I’ve changed that rule, for now, as I think it’s important for him to become attached to the things he sleeps with in the same way that he was attached to the paci.

He needs that comfort and how better to get to “know” something new than by playing with it? He is NOT allowed to take them out of the house under any circumstance and I’m sure, with time, we’ll go back to our crib-only rule. It’s really helped him adjust though so I think it’s worth it!!! 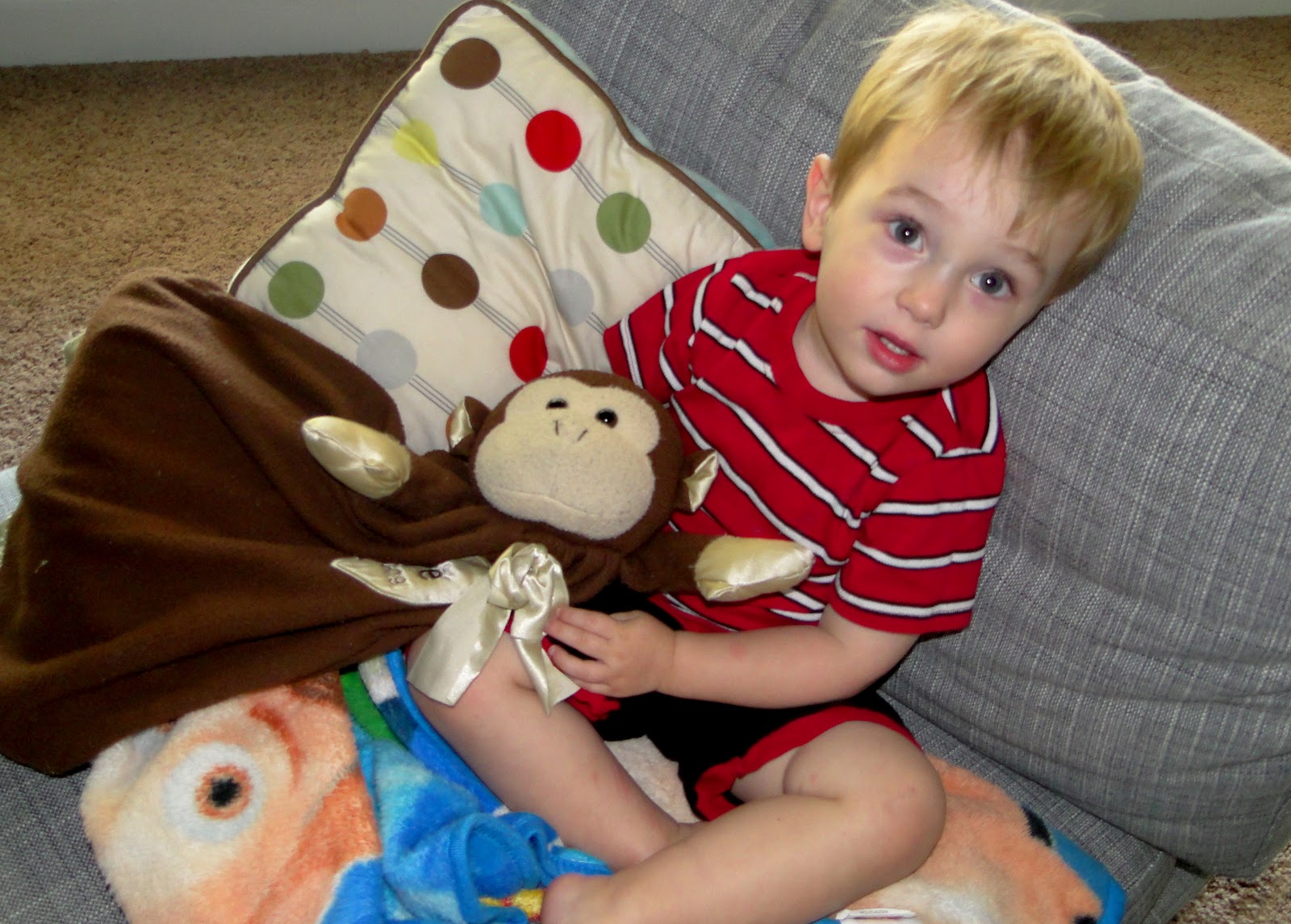 Overall, the whole goodbye-paci thing hasn’t been too painful. I don’t really understand when parents tell me that the cutting the tip method didn’t work for them. How does it not work??? The only way it wouldn’t work is if I, the parent, had caved in and bought another paci! We cut ’em, he tossed ’em, and that was that.

I consider myself to be hardcore when it comes to times like these. When Zach and I make a parenting decision we stick to it! If we face a parenting problem, we conquer it! I think this was another success in our books 🙂

I’ve had a VERY big debate with myself about the paci (remember this post here?). At the end of the day though, I’m about 90% sure we’ll use it with baby #2 someday. It’s been proven to lower the risks of SIDS so for that reason alone it’s worth the hassle. Plus I’ve heard HORROR stories about getting kids to stop sucking their thumbs…can’t cut the tip off that can we?

To Recap Here are My Tips for Weaning from the Pacifier:

I have now had FOUR kids. Kye was our first and was the ONLY Paci baby. But none of the rest of them have been! Our second, Britt, was a finger sucker (she never took to a pacifier and just always wanted her fingers) and we went through the weaning process with her from finger sucking. If you’re needing help with finger sucking read this post! 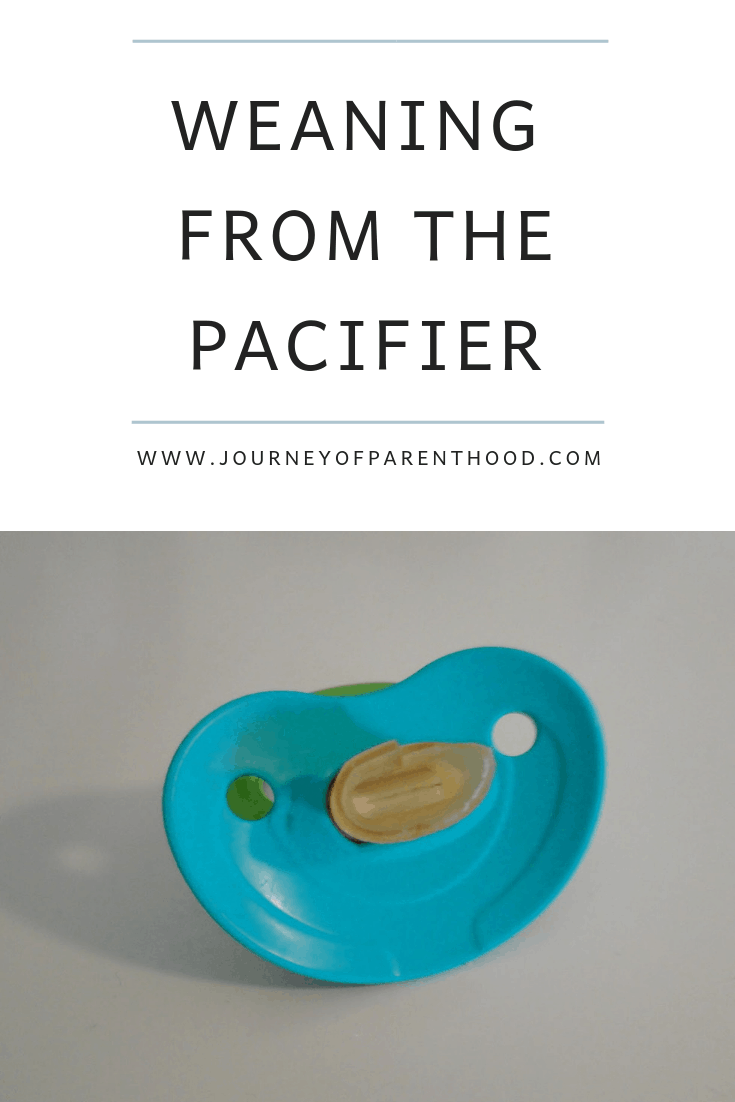