Since Kye’s bad day on Monday he’s been fine! However, his diapers haven’t been. Since I breastfeed his diapers are always pretty runny (like butterscotch pudding I’d say) but lately they have been like liquid and have been much more frequent than usual. That has lead to the WORST diaper rash this kids hiney has ever seen!

I decided yesterday to break down and call the dr. I’m NOT one of those omg-call-the-doctor mother’s but at his appointment last week she TOLD me I can call anytime with any questions so I just wanted to make sure he’s not dehydrated or something from all the extra poop.

Well when I called I got a nurse and the nurse took down all his “symptoms” and said she’d ask the dr. and call me back. When she called back she told me not to give him any juice…um I haven’t been. Ever! And to use A&D cream on his rash rather than the Desitin. That was it! She then asked how often he’s going #2 and said she’d call me back. When she did it wasn’t any other info! I asked her if I should feed him cereal or not and if that could be the issue and she said, “I’d recommend that you take him to our walk-in clinic.”

Keep in mind, I don’t think ANYTHING is wrong with my kid!!! But what mother wouldn’t take their baby in when they are told to??? So of course I rushed to get ready, get him ready, and get us both up there before they closed. I was pretty annoyed but was pleasantly surprised when we got there. First off, we were only in the waiting room with 1 other patient and they have an awesome fish tank that kept Kye occupied the entire time we waited, which was only about 15 min!

Once we got back in the room I had the BEST experience I’ve had yet at the doctors office. The nurse was SO sweet and went on and on about how cute he is and talked to him and cooed at him. Then the dr. came in within 5 minutes and was SO wonderful!!! He and I talked for 45 min!!! 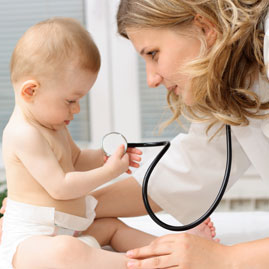 He checked out Kye and, duh, he’s fine. He said that he’s very healthy, cute, and that he can tell he has a wonderful mother! Made my day!!! He said that as long as he isn’t pooping like 8-10 times a day, it’s not bloody, or it doesn’t stink really bad then he’s fine. He listened to his stomach and said it’s not messed up at all. He said if the diaper rash is still bad to use a hydro cortisone cream under the Desitin (he also said that I’m a smart mom b/c I used the original Desitin and not the creamy!).

The doctor (John he said to call him!) said that he usually doesn’t recommend starting babies on solids until at least 5 months old. I told him that he showed all the signs of being ready and that Stephanie, his pediatrician, said with his stats that he’s ready. He told me that he would stop the cereal for a week to just see if it helps but that he’s so close to 5 months old that it’s fine to give it to him. I showed him the box of cereal that I’ve fed him and he said he only knows about Gerber! I’m pretty hardcore with trusted brands so I’ll probably use Gerber from now on just because he said that haha!

We also looked at Kye’s chart which I’ve never done before and it was neat to see what those percentages mean and where he is on the growth chart. He said he’s actually not a “big baby” because a “big baby” would mean that he was way off the charts on weight or length and then average or below average on the other one. But with his percentiles being 80% length, 70% weight, and 50% head circumference (something else his pediatrician never told me!) it means he’s just right b/c all the numbers are close.

Even though it was a pain rushing up there and Kye didn’t really need to be seen I’m glad I went! I had FUN! haha! It’s pretty sad when going to the dr. is fun huh? But it was nice to have someone show sooo much interest in Kye and to talk babies with someone without having to worry about overly talking about my kid, not asking enough about theirs, or wonder if they are judging or something ya know?

I asked him about what baby food he recommends to start with if Kye doesn’t like the cereal and he said greens first then squashes. I told him that I’ve heard a MILLION different opinions on all of this and he said his advice is probably a little outdated since he deals only with sick children and hasn’t had a well-visit with someone in 6 years! haha! We did get to talking and he loved Kye’s razbaby teether (lifesaver!) so I told him about that and he looked at Kye’s chart and asked about the GERD so I told him my thoughts on it. I told him that I don’t think Kye ever had GERD and that it was just a hyper lactation issue. He asked how I solved my milk problem and I told him how I just nursed from one breast each feeding for a couple days and it slowed things down…he told me I taught him two things and that HE was glad I came in!!!

The whole experience was so wonderful and I want to HIGHLY recommend Winnersville Walk-In Clinic to anyone who lives in the Valdosta area. I’m kinda considering the idea of switching pediatricians. After all the special attention we got at the clinic it made me wish our own doctor showed that much attention! This guy even checked out his gums for me to see how he’s doing with teething…when I mentioned teething at my dr. did they even look in the kids mouth? nope! While I partially feel like it was a waste of time going up there, I’m still glad I did b/c I’d much rather go and hear that Kye is fine than not go and him endup being super sick or something!