Back when I was planning our family vacation to the Jacksonville Zoo I asked on Facebook for things to do in the area in case it rained that day. Someone posted about Veggie Tales Live. I looked into it and it turned out it wasn’t in Jacksonville the same weekend we were going…it was on March 23rd, a Friday. I asked Robyn about it because I knew it was something she’d probably enjoy taking Lorelai to. I figured it could be a fun get-away with the older kids (as I also knew it was something Zach would not enjoy seeing haha). It all sounded good, then we realized it was the day after Hunger Games. Staying up till 4 am then driving 2 hours to Jacksonville and back the next day?!?! Didn’t sound too exciting…

When Robyn decided that she wasn’t gonna go to the movie we talked about Veggie Tales again and she said she didn’t mind doing the driving! I figured I’d be tired either way, why not do something fun? It was a crazy weekend. Hunger Games was Thur night, Dad’s Day at school was Fri morning, then Fri afternoon we left to go down to Jacksonville. While we were gone Mom came and watched Britt so Zach and Trey could go see Hunger Games (then Trey spent the night after and they stayed up playing video games). Then Saturday Zach went to Jacksonville himself with Jordan for a guys day to celebrate Jordan and Casey’s wedding and Sunday we had church as well as Stevie’s 4th Birthday Party. All of this is following a week where Zach had been out of town for business. Literally Zach and I didn’t get to spend ANY time together for almost an entire seven days due to our conflicting schedules!!! I MISSED him!!!

Anyways…I napped while Britt napped that morning and felt pretty rested. I put Kye down for nap as early as I could since we had to leave our house at 3. Since Zach had to go to Dad’s Day that morning he just worked from home so he could take care of Britt until Mom came to watch her when he went to the movie. Robyn came over at 2:30ish and Zach put Kye’s car seat in her car along with our travel dvd players so the kids could watch movies on the way there and back. Kye, Robyn and I picked up Lorelai from her grandma’s house and hit the road! We did stop through McDonald’s on the way so I could get an iced coffee…I needed it for SURE!

Kye was PUMPED to go to “another Jacksonville” and couldn’t wait to see the “Veggie Tales show.” I think he thought we were going to a movie theater? The two hour drive down FLEW by. It was really not bad at all (then again, I wasn’t the one driving haha). Robyn and I never rain low on conversation and the kids did great watching movies. Lorelai was a little upset at first because she had to leave her new pet chicks but she cheered up and it was sweet seeing Kye try to pep talk her. I love that he’s at an age where he is understanding emotions and wants to comfort his friends in times of need.

When we got there we first went to the actual location of the show (at a HUGE local church) then went to find something nearby for dinner. We ended up at McDonald’s…in the ghetto. Like bars on windows and such. Pretty sketchy but what other option did we have? We took turns ordering because it was ridiculously slow and crowded. I ordered first then took the kids outside to start eating…they were SO cute sharing Kye’s food! 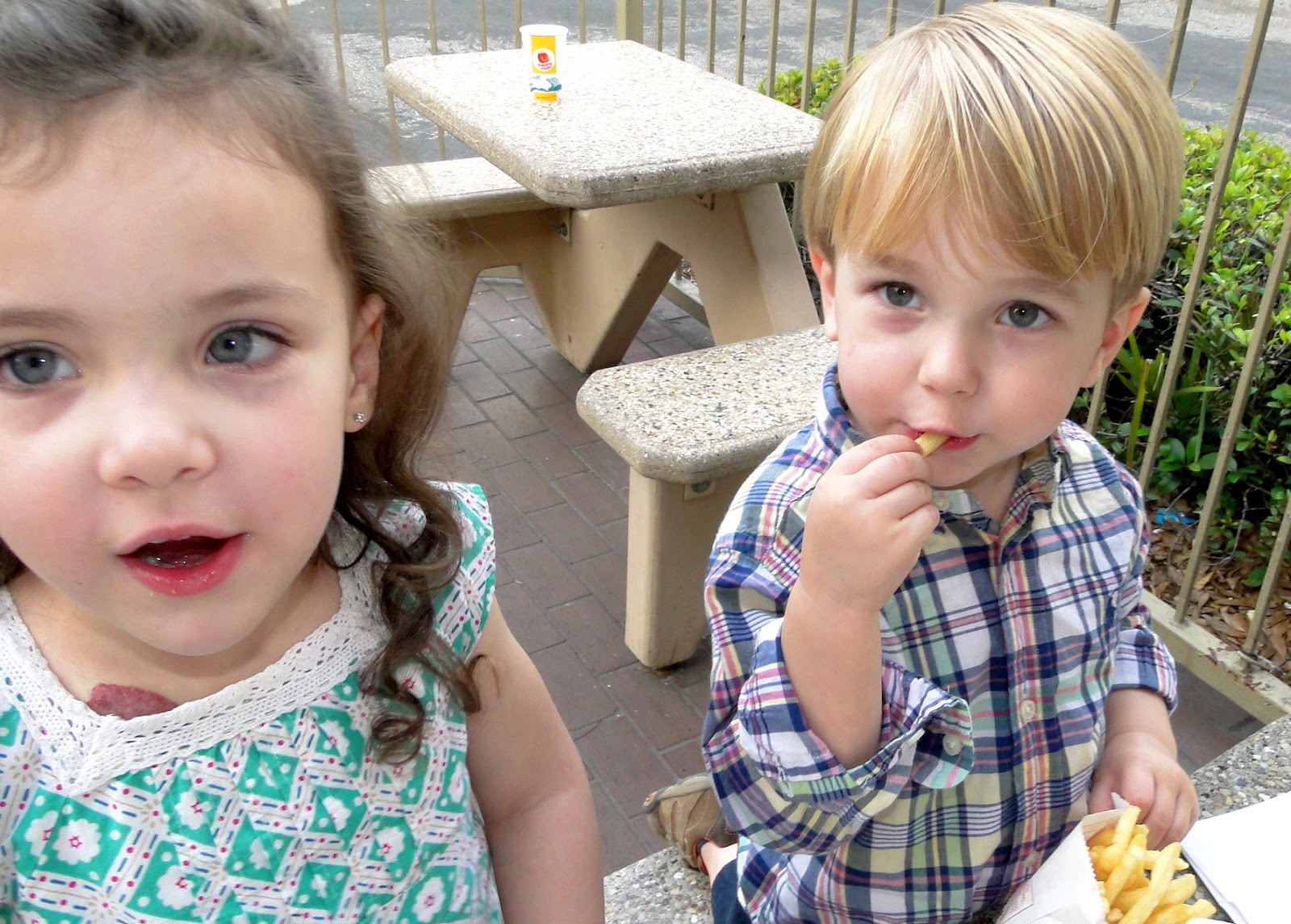 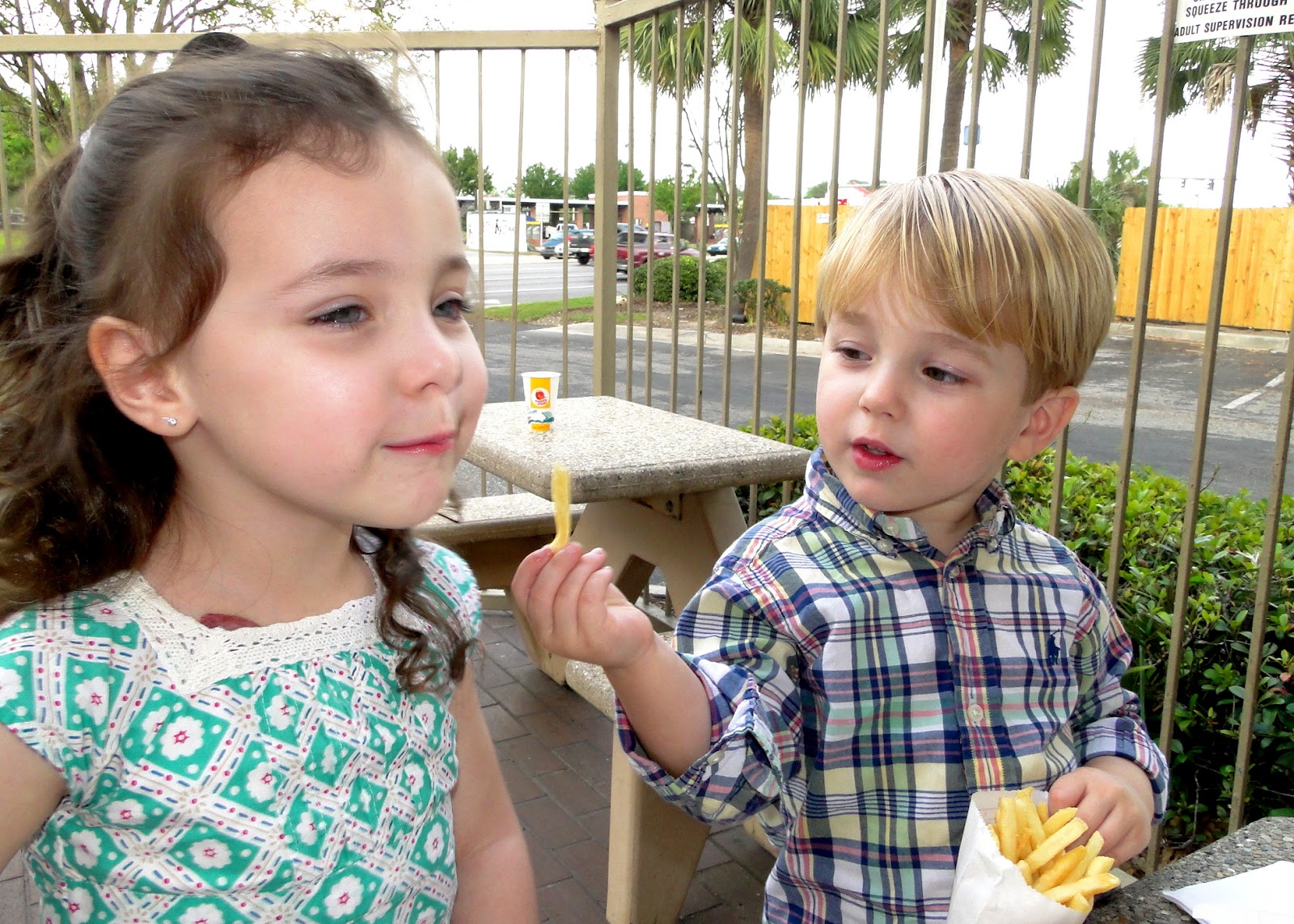 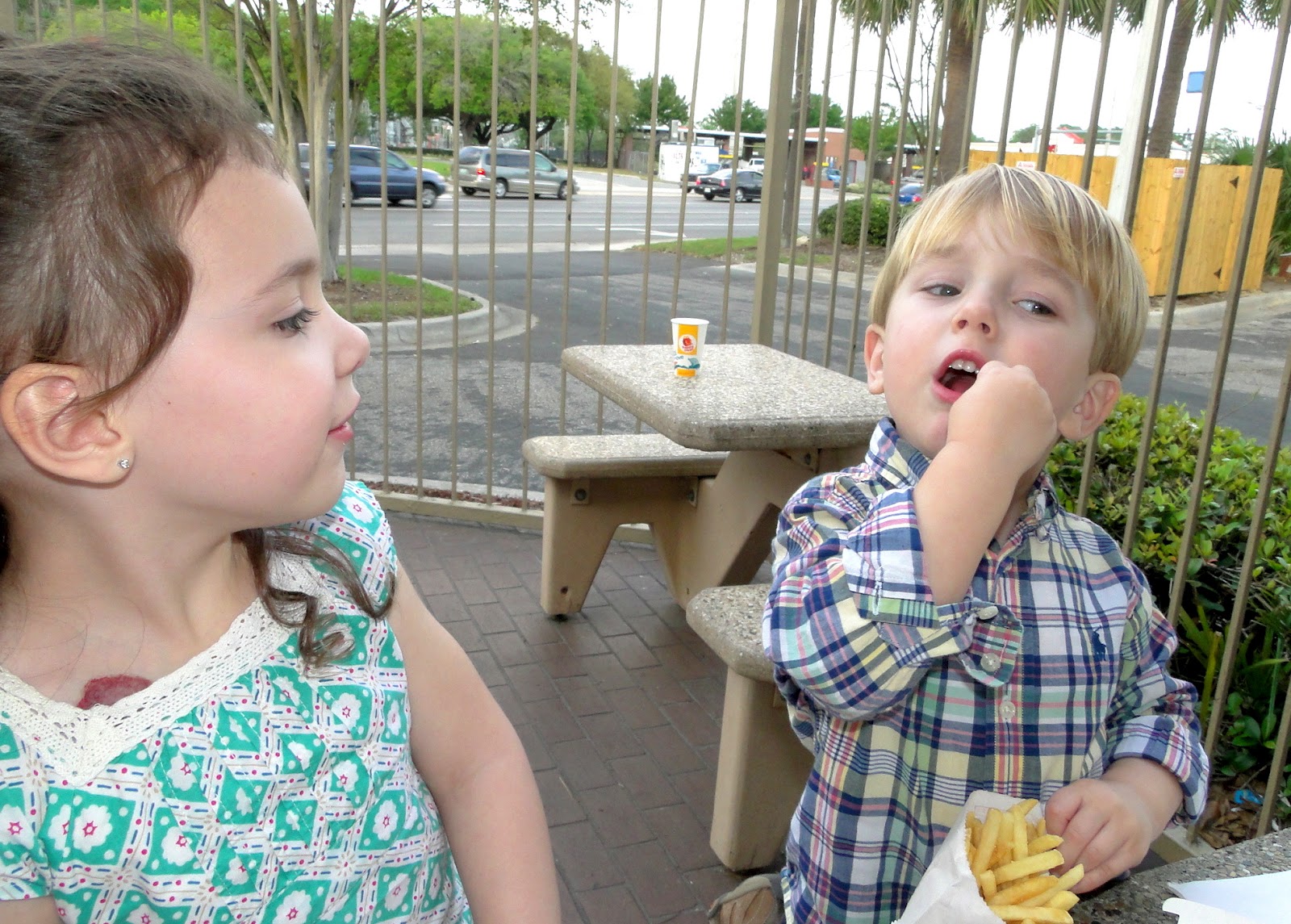 While we were waiting on Robyn I saw a family of 7 (two adults, four kids and an infant) leaving in the parking lot. ALL seven of them got into a small SUV that obviously didn’t have a third row. The four kids crammed in the back (neither parent placing them in any type of car seat, booster seat or even bending to buckle a seat belt) then the parents got in the drivers and passengers seat. The mom (I’m assuming anyway) carried the baby in her lap. I seriously about died. Are you kidding me?!?! I pray they lived like right down the road but I have a feeling they didn’t. Stuff like that REALLY irritates me. I have friends who have lost their children but then they are people out there who don’t even attempt to keep their children safe. Sometimes the world simply isn’t fair huh?

Anyway (I’m getting off topic quite a bit in this post haha) after eating the kids played for a bit to burn off some energy from riding in the car. It was a night of a LOT of sitting. The long ride down, the show, then the long ride back so I’m glad they were able to play! 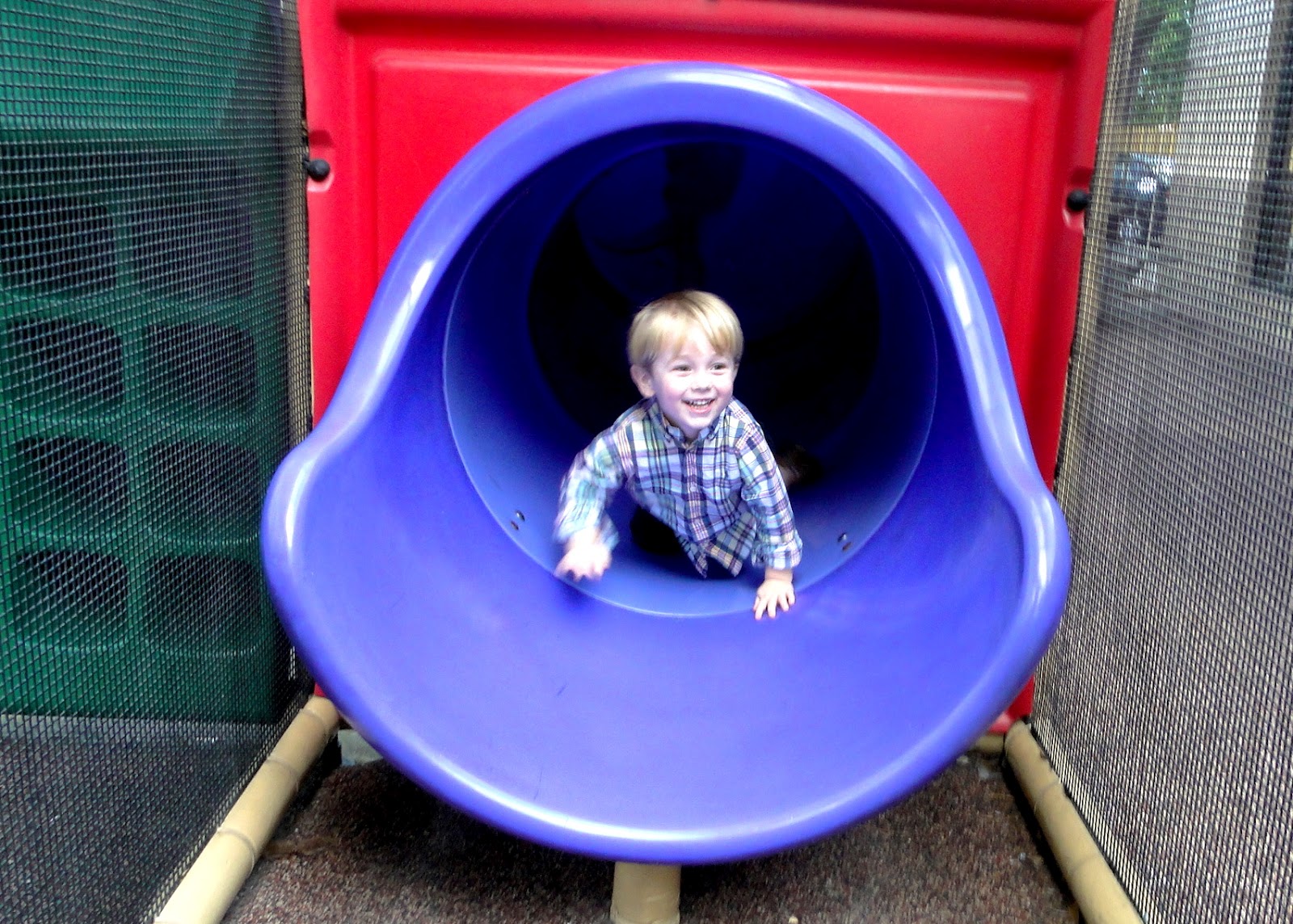 The doors opened for the show at 5:30 but the actual show didn’t start until 6:30. We semi-hurried to get there only because it was general admission and we didn’t want horrible seats. I used my old school concert knowledge (little known Emily fact…I’ve been to well over 50 concerts, I used to LOVE me some live music!) and suggested heading up to the balcony seating. If you’re ever in a general admission situation, always go up. You have a MUCH better view than being at the back on the main level! It worked out great and we had wonderful seats! We took turns saving seats while the other one of us took a kid to the potty. Kye and I stopped by the souvenir booth. I wanted him to get a shirt…he wanted to get a cheap, junky light up want. We compromised on a Bob stuffed animal. While I pretty much loathe stuffed animals at least we can pass this thing down or donate it to church or something whereas the plastic wand would have ended up in the trash two days later!

We also grabbed an extra Bob for Lorelai. I feel like when you’re with another parent it’s totally not cool to let your kid get something or do something or even eat something without kinda seeing if it’s okay with the other parent because you know their kid will want to get, do or eat the same thing! Since it was pretty much a mad house and there was no way I was gonna go back up the stairs to ask Robyn if it was cool with her about getting Bob I just figured it’d be easier to pick up Lorelai one too…that way there wouldn’t be any kid drama. Karma worked out well…Kye split his milk later on and Robyn didn’t mind sharing Lorelai’s to avoid mega meltdown (my kid HATES spilling stuff!). 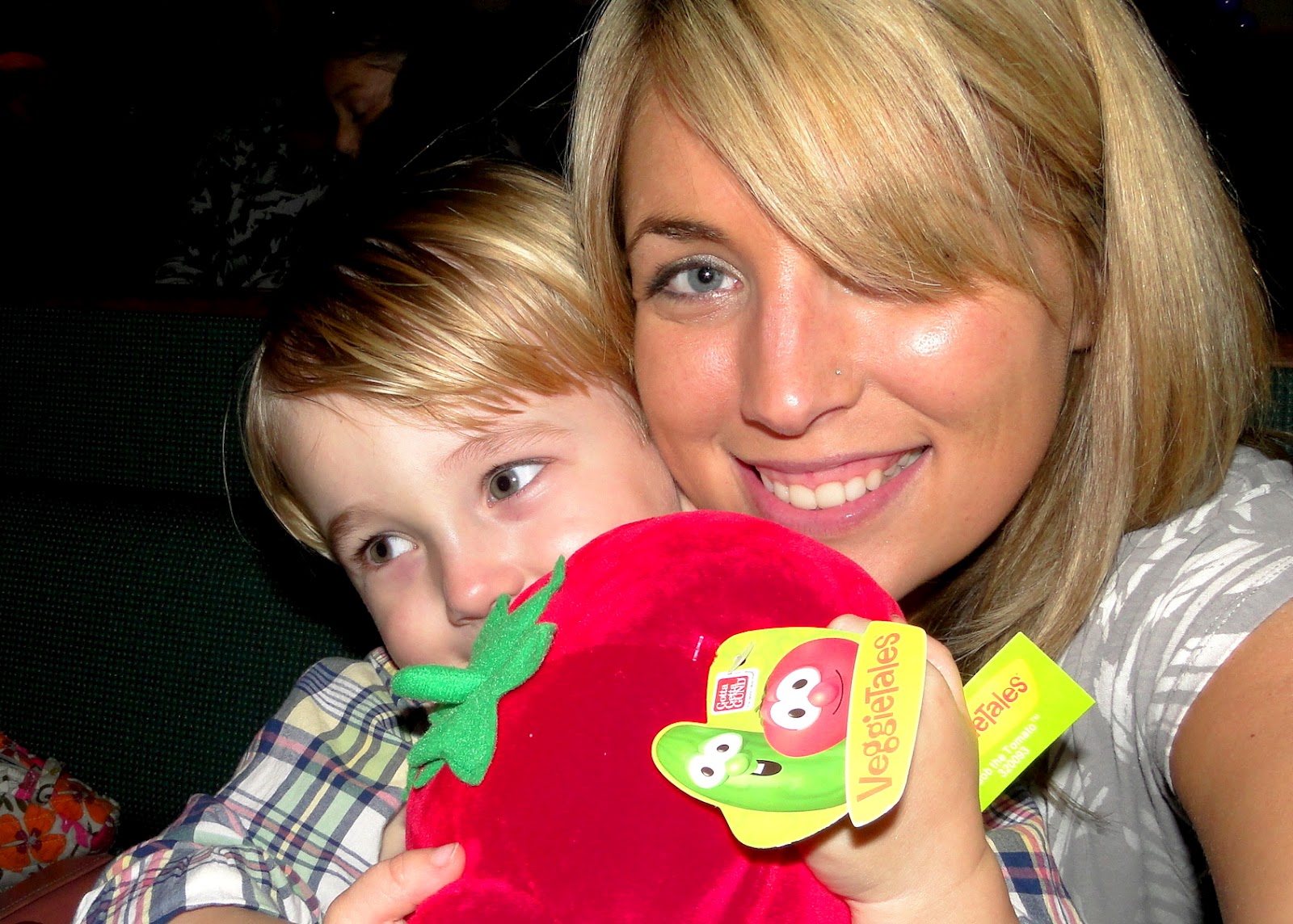 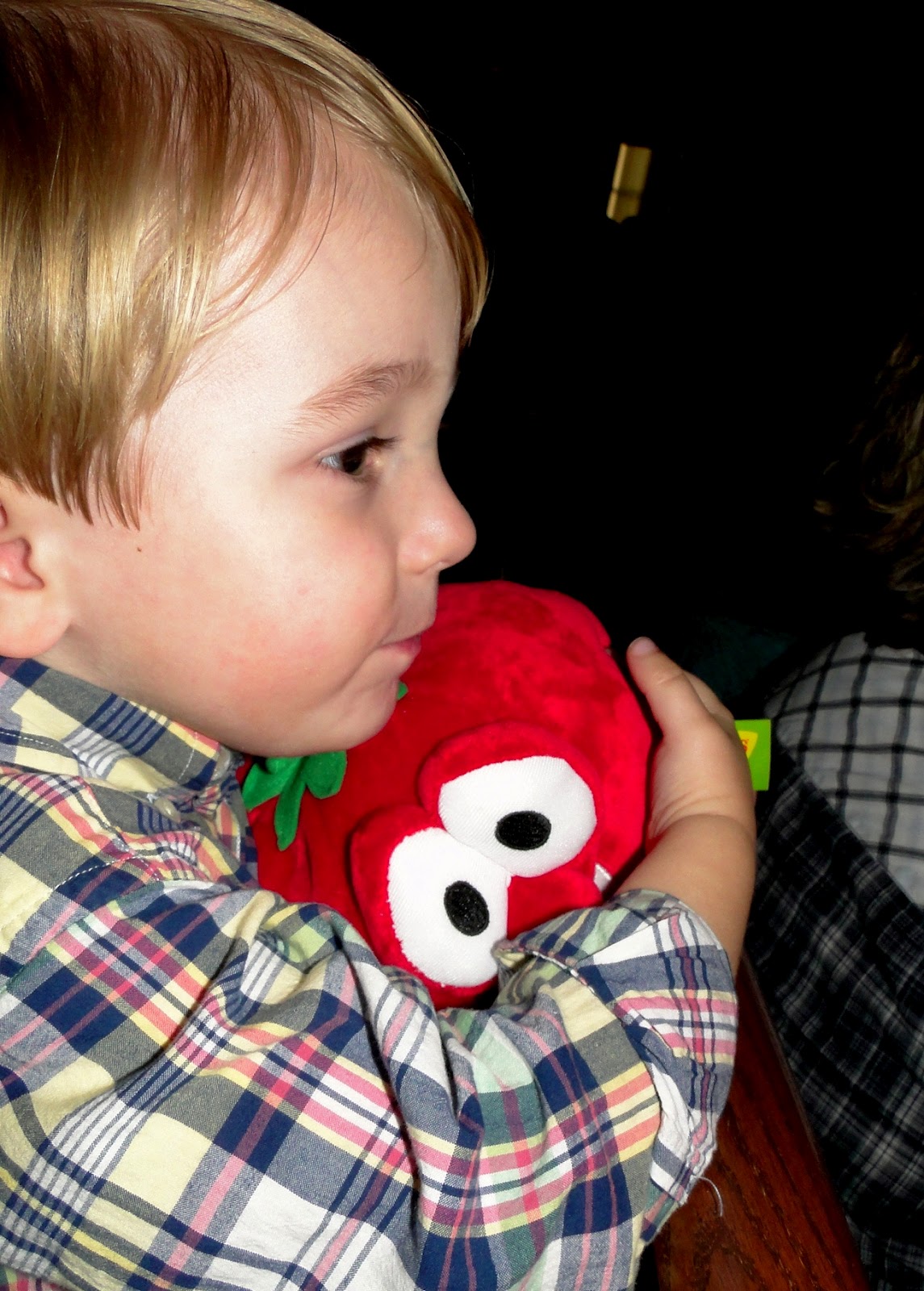 We were pretty impressed with the characters…their eyes and mouths even moved! 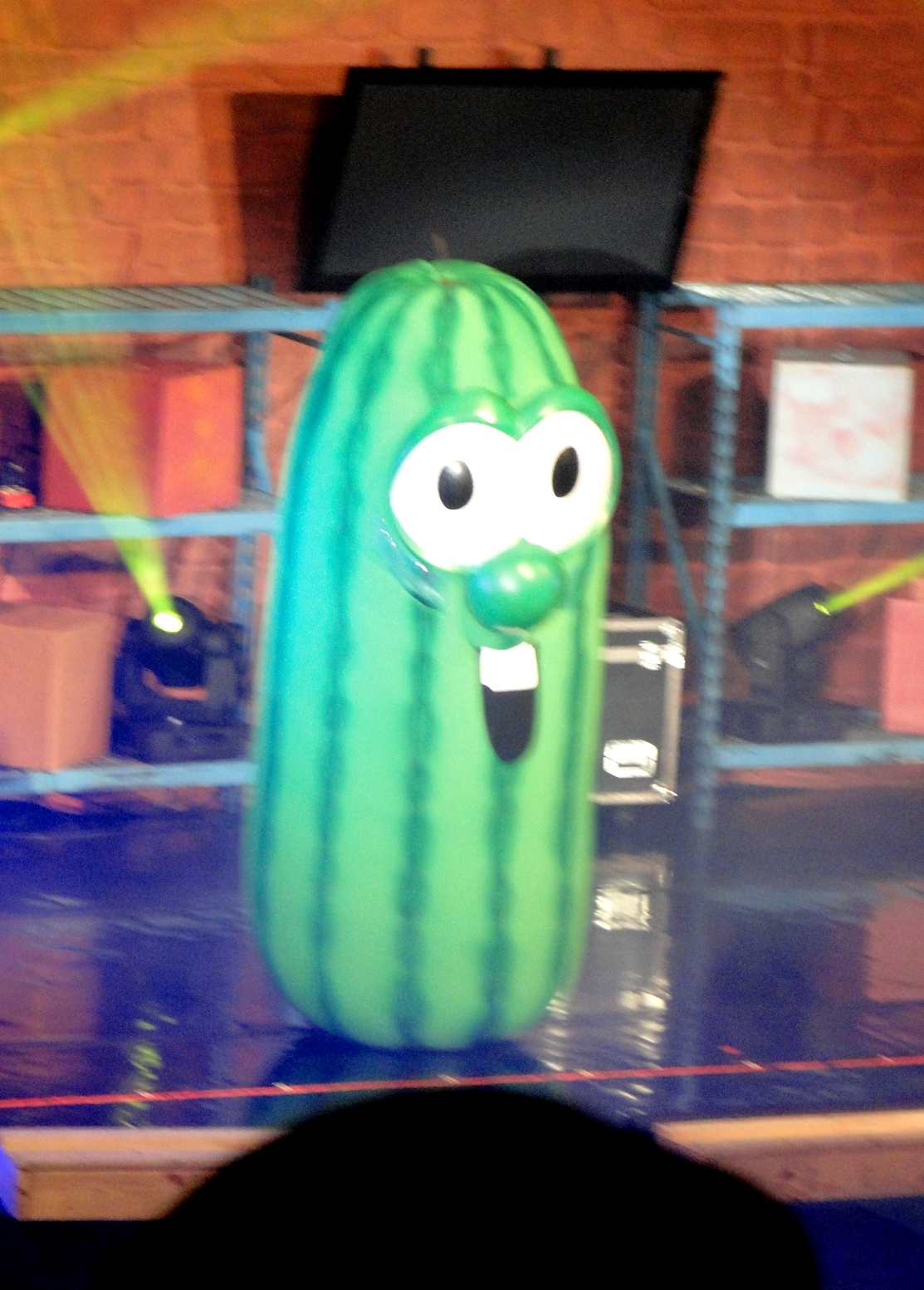 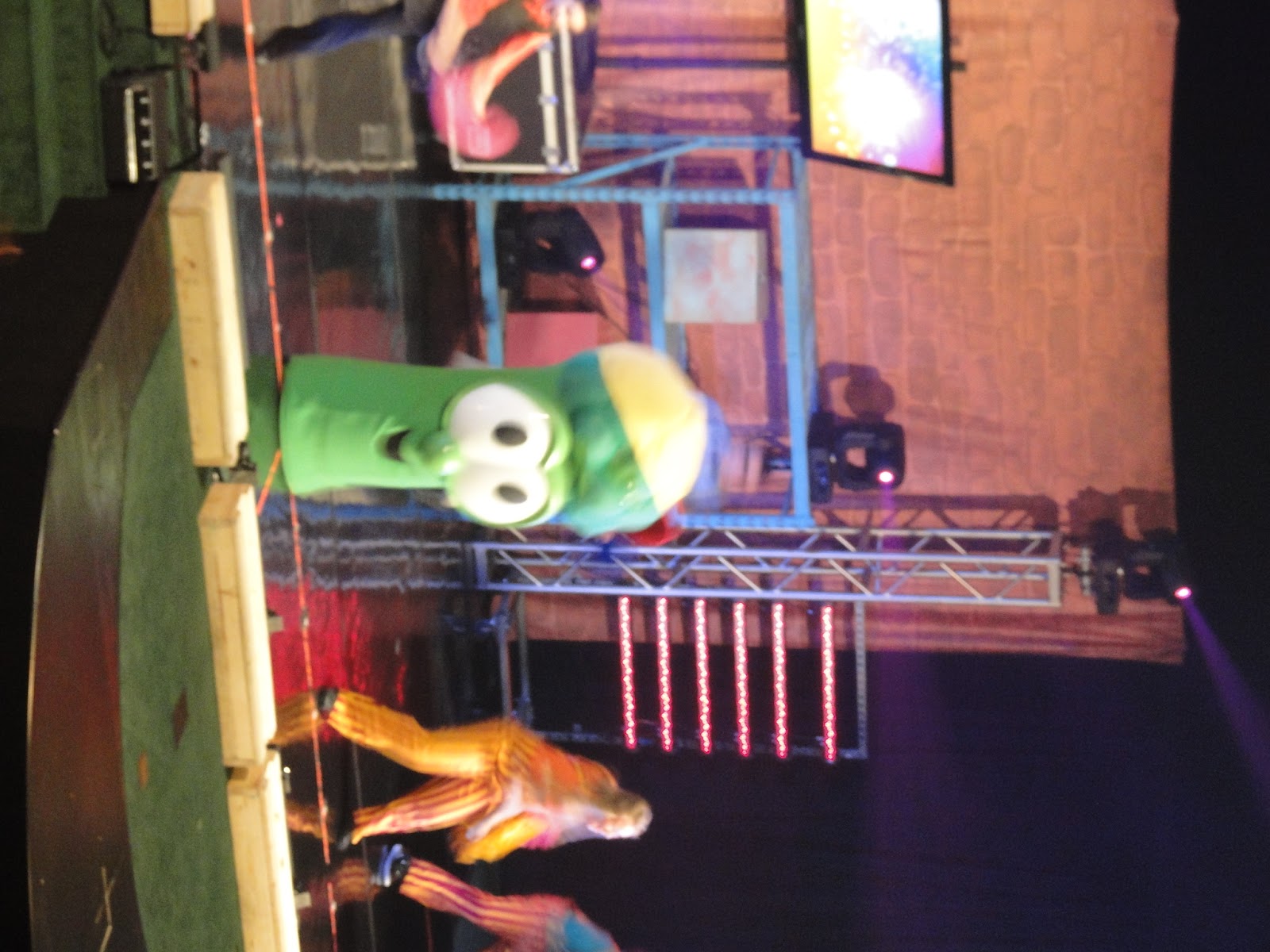 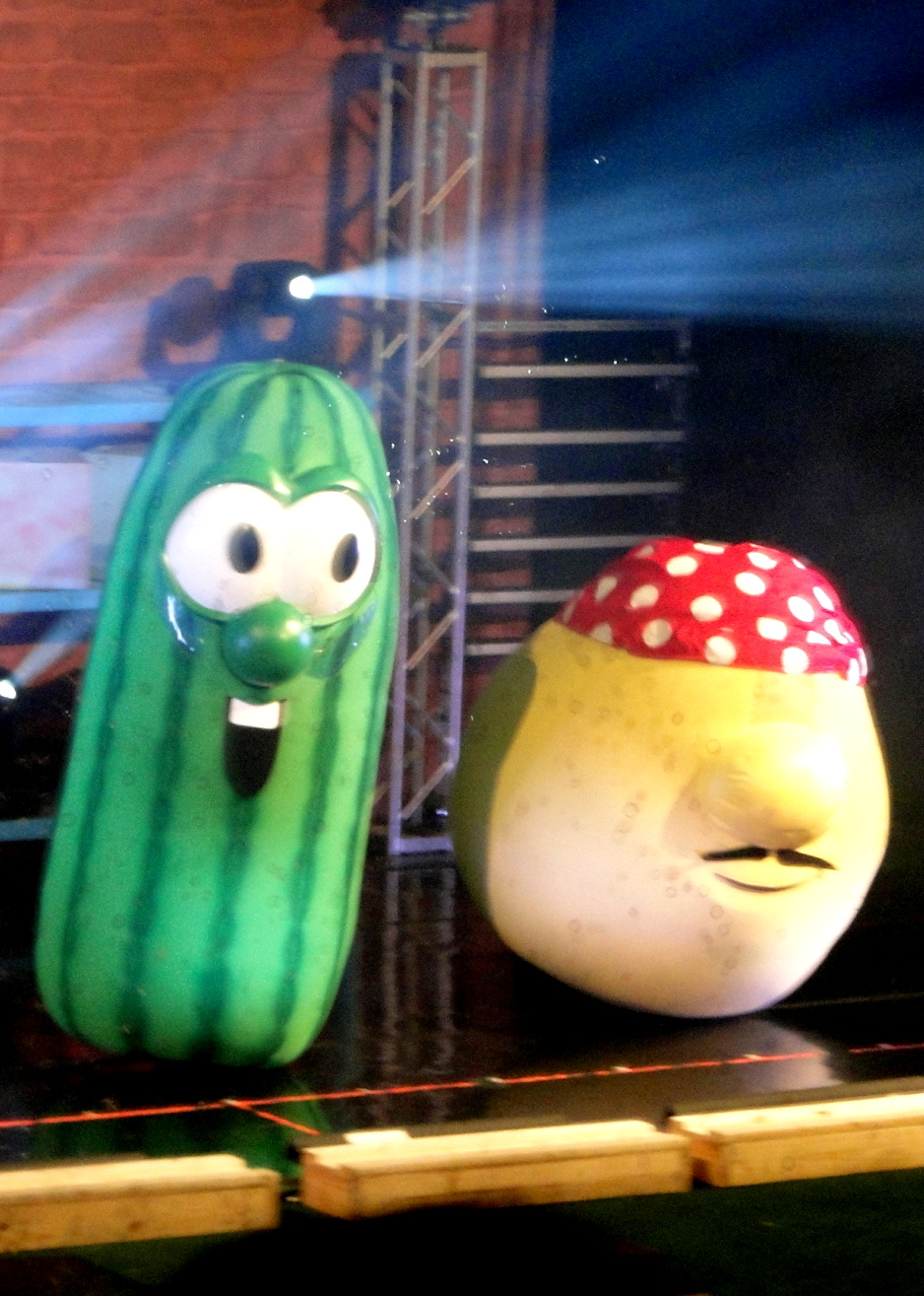 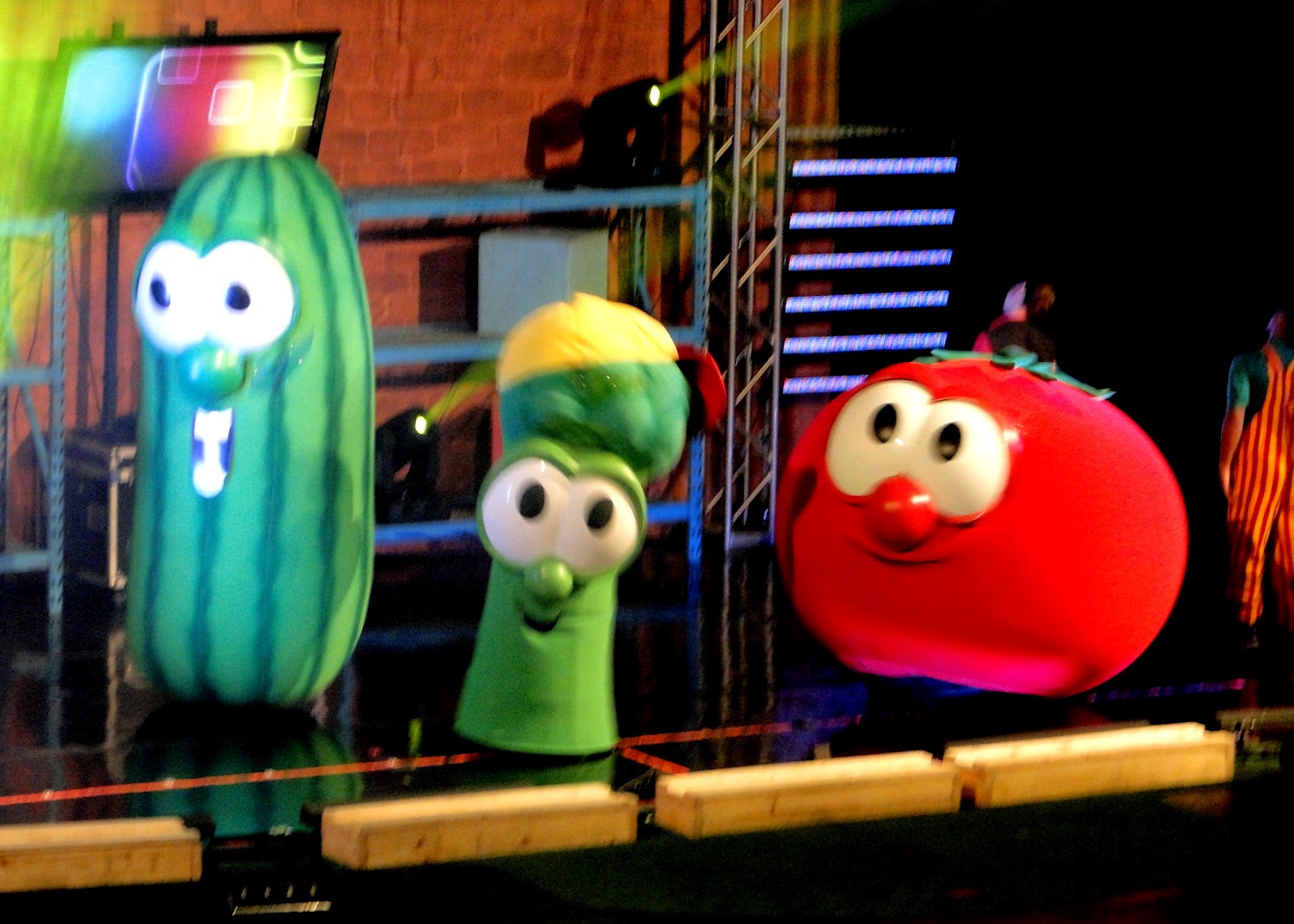 Bob has always been my personal favorite 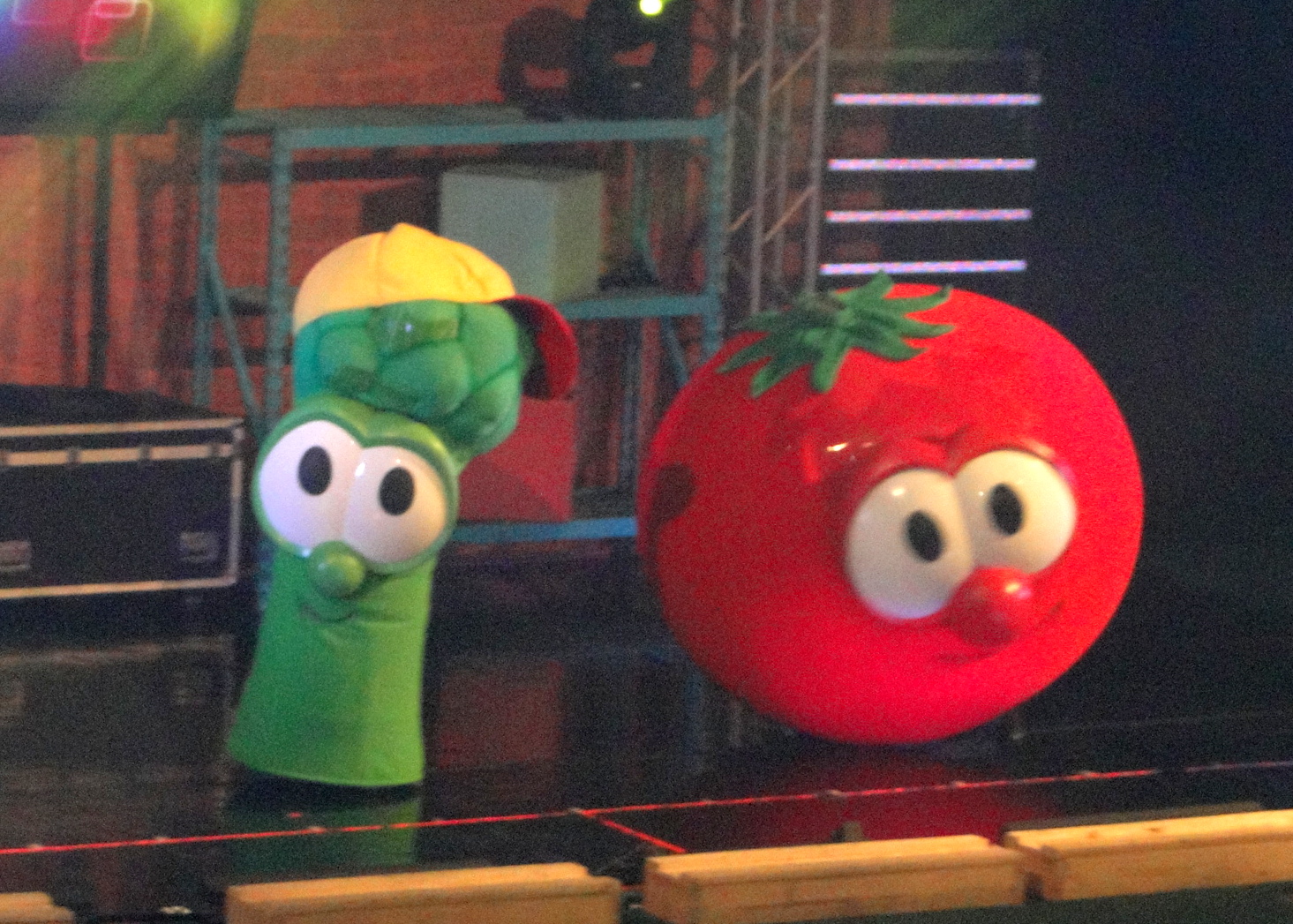 The kids LOVED the show! Like loved it. They were a great age for it and the show was very upbeat and energetic which was great for three year olds. I was mega disappointed though in the storyline. It was just a collection of Larry’s Silly Songs. Fun for the audience, but NO real focus on GOD which is really the whole point in Veggie Tales isn’t it?!?! 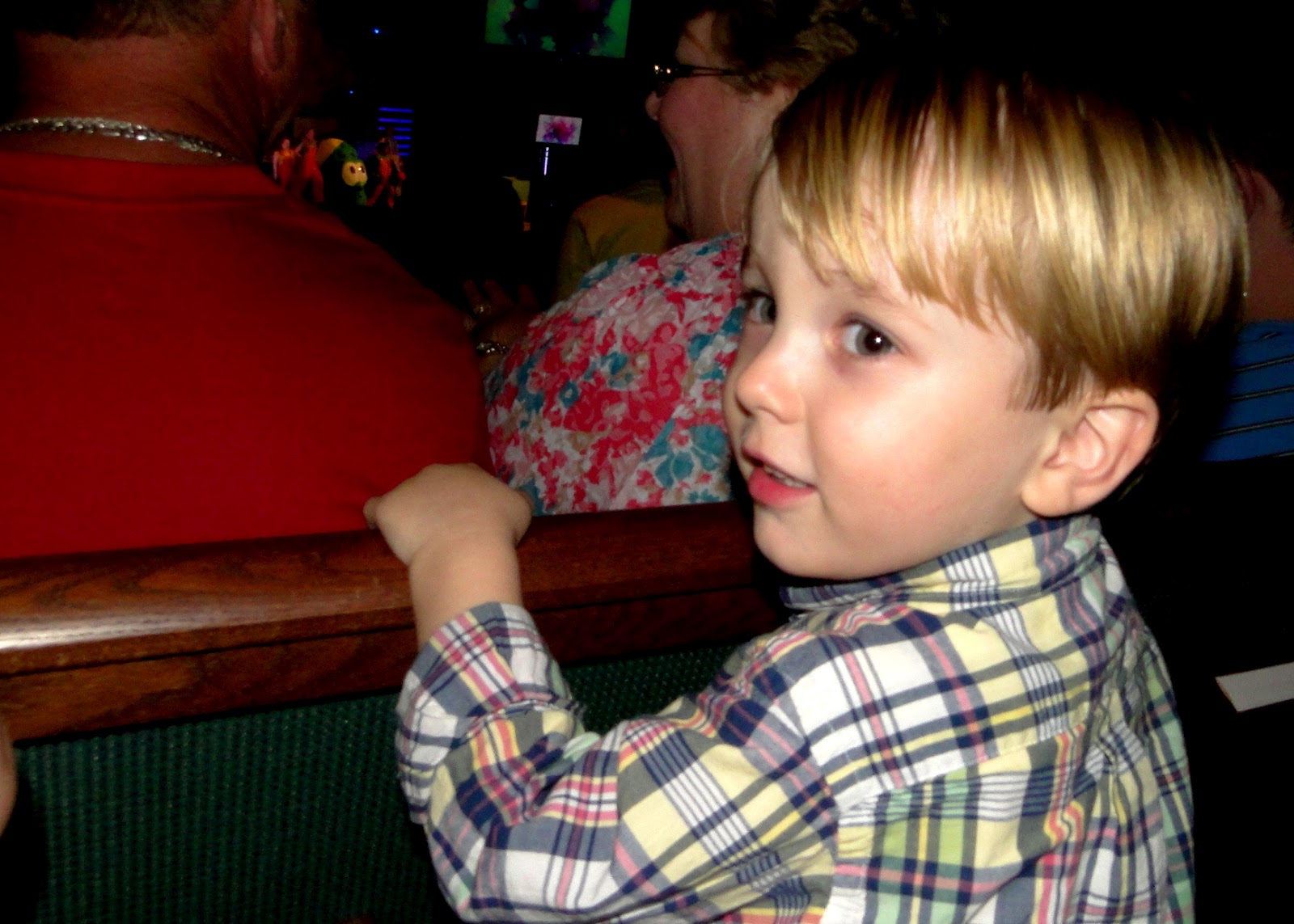 Both Lorelai and Kye LOVED the music and really, really got into it. It’s so fun having two together like that because they kept pumping each other up and getting each other more excited. I took this video of them dancing…it’s kinda dark but you can still tell how hardcore they were! 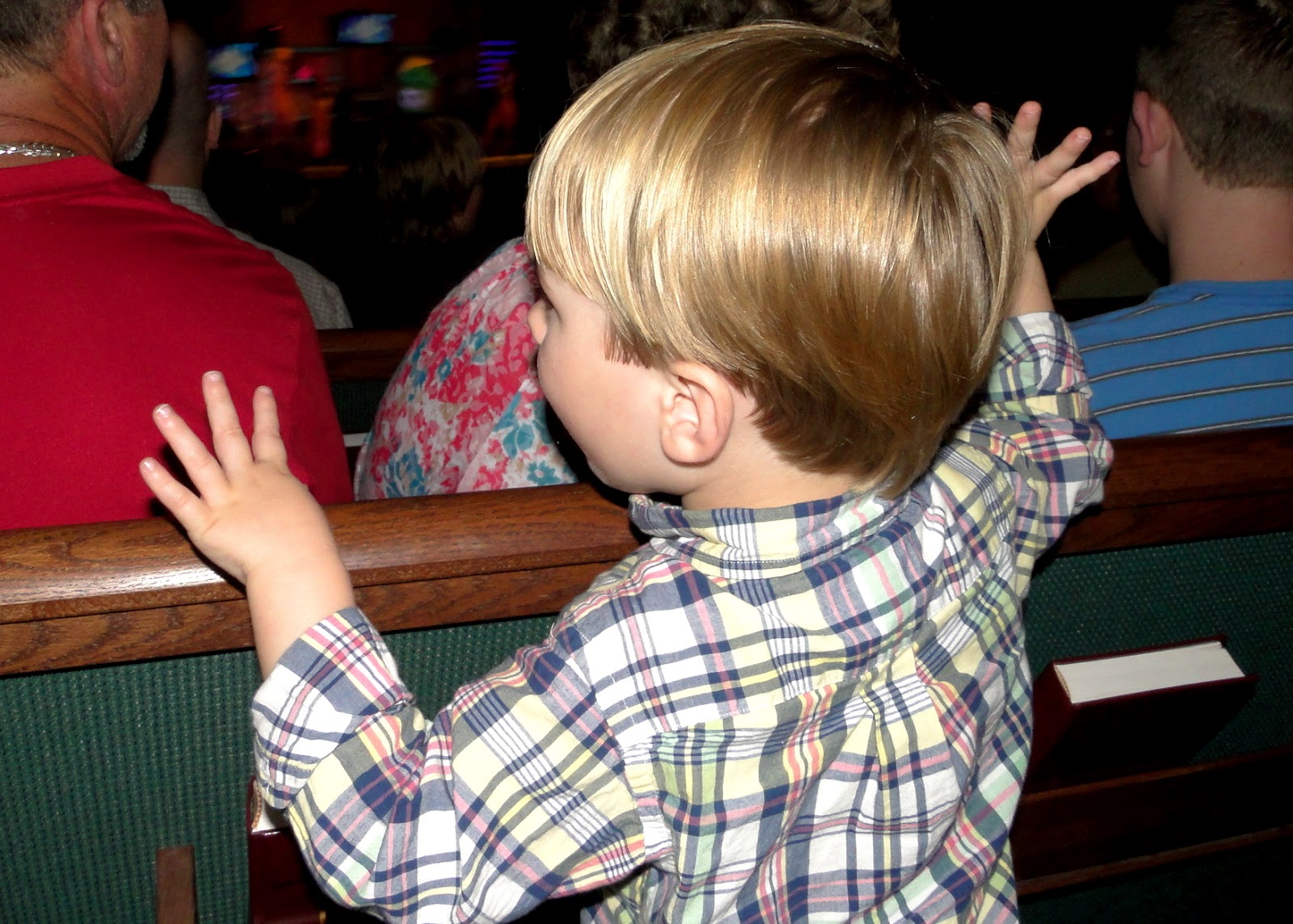 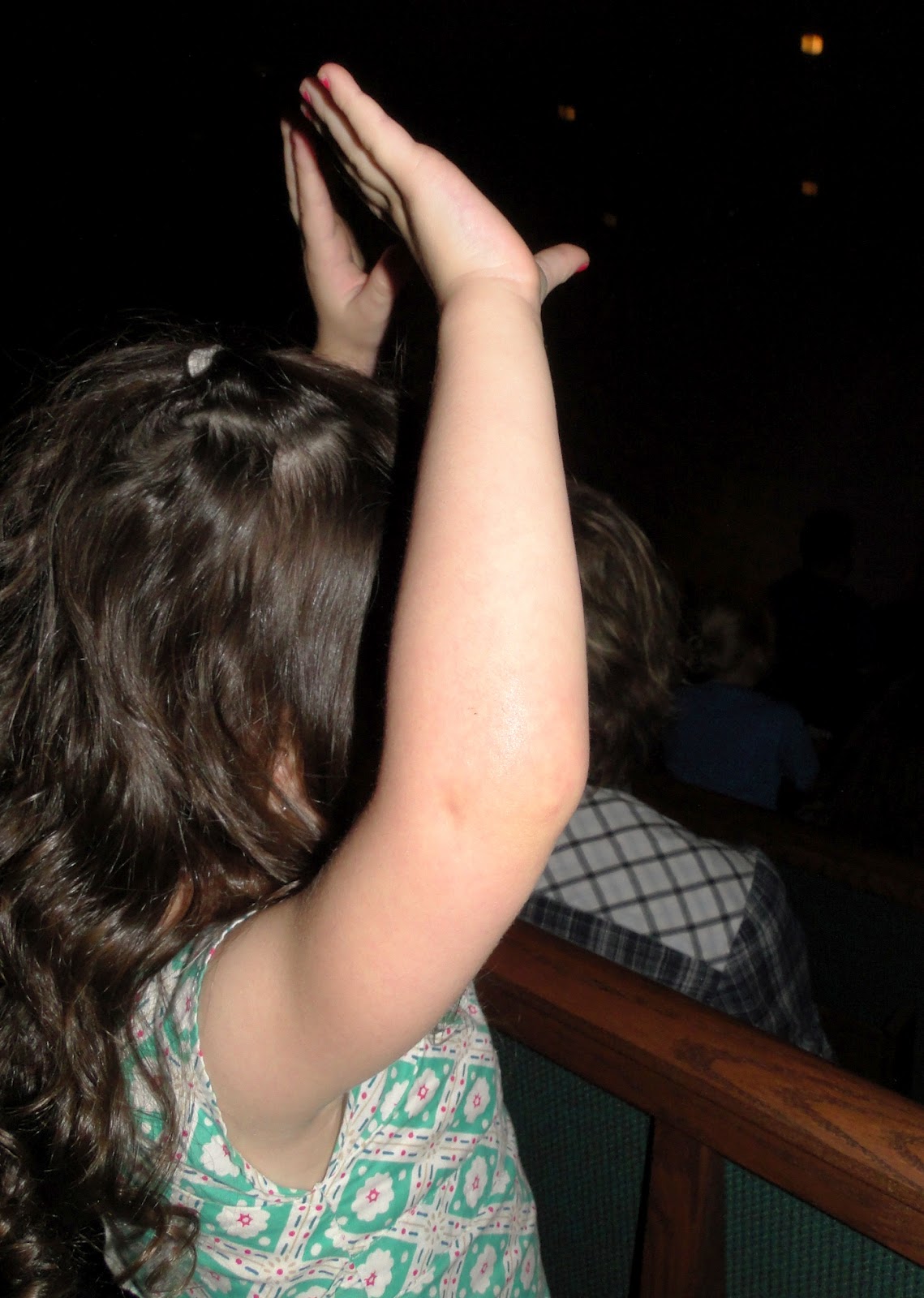 Kye was stomping a bunch! 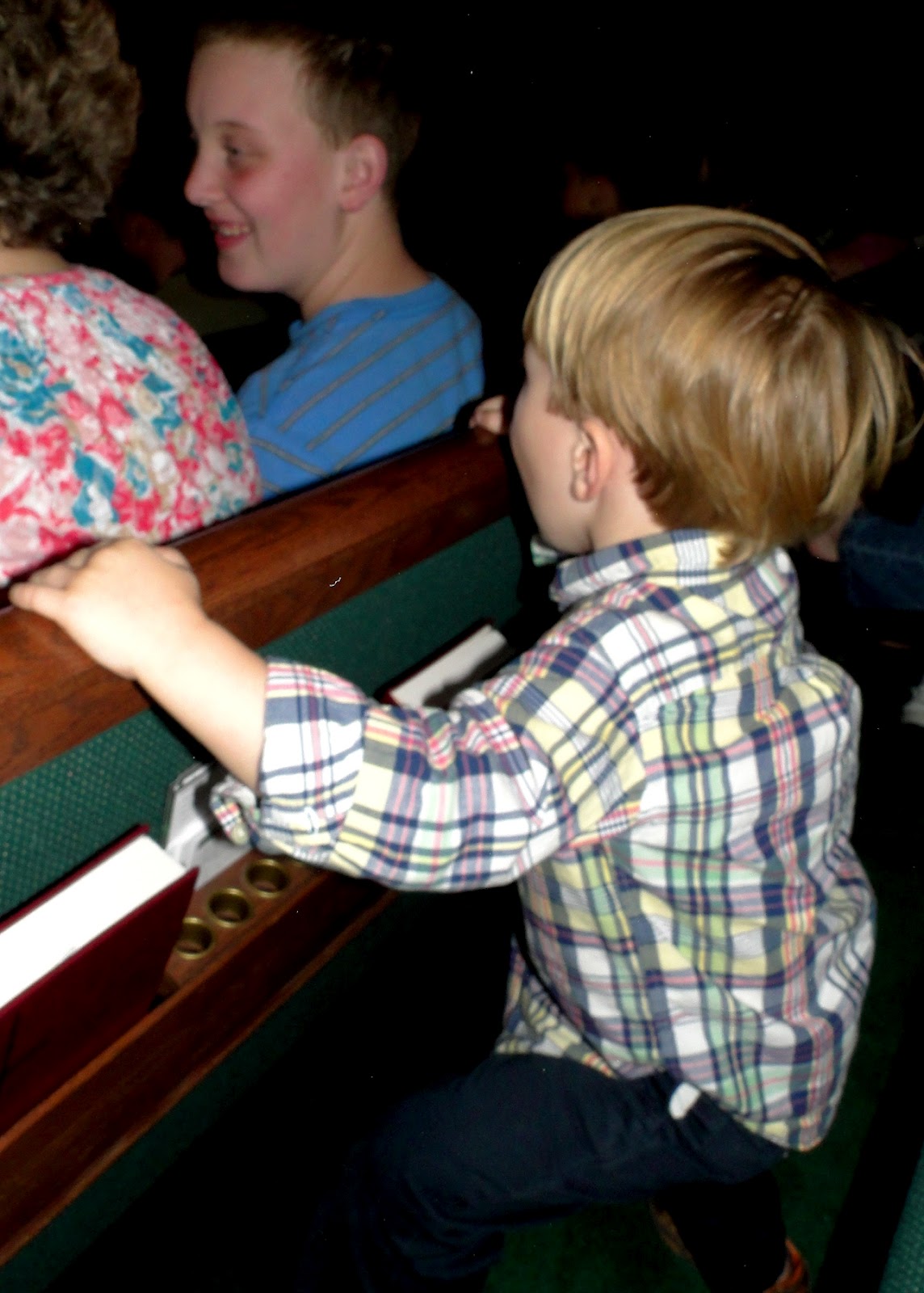 The show started late because some guy talked forever about local church events coming up then after only about 20 min or so they had a 20 minute intermission! Why in the world did we need any intermission at all?!?! Robyn took Lorelai to the bathroom during this time and Kye had a great time filling out a visitors card from the church 😉 Drawing/writing/coloring can keep my kid entertained for ages!!! 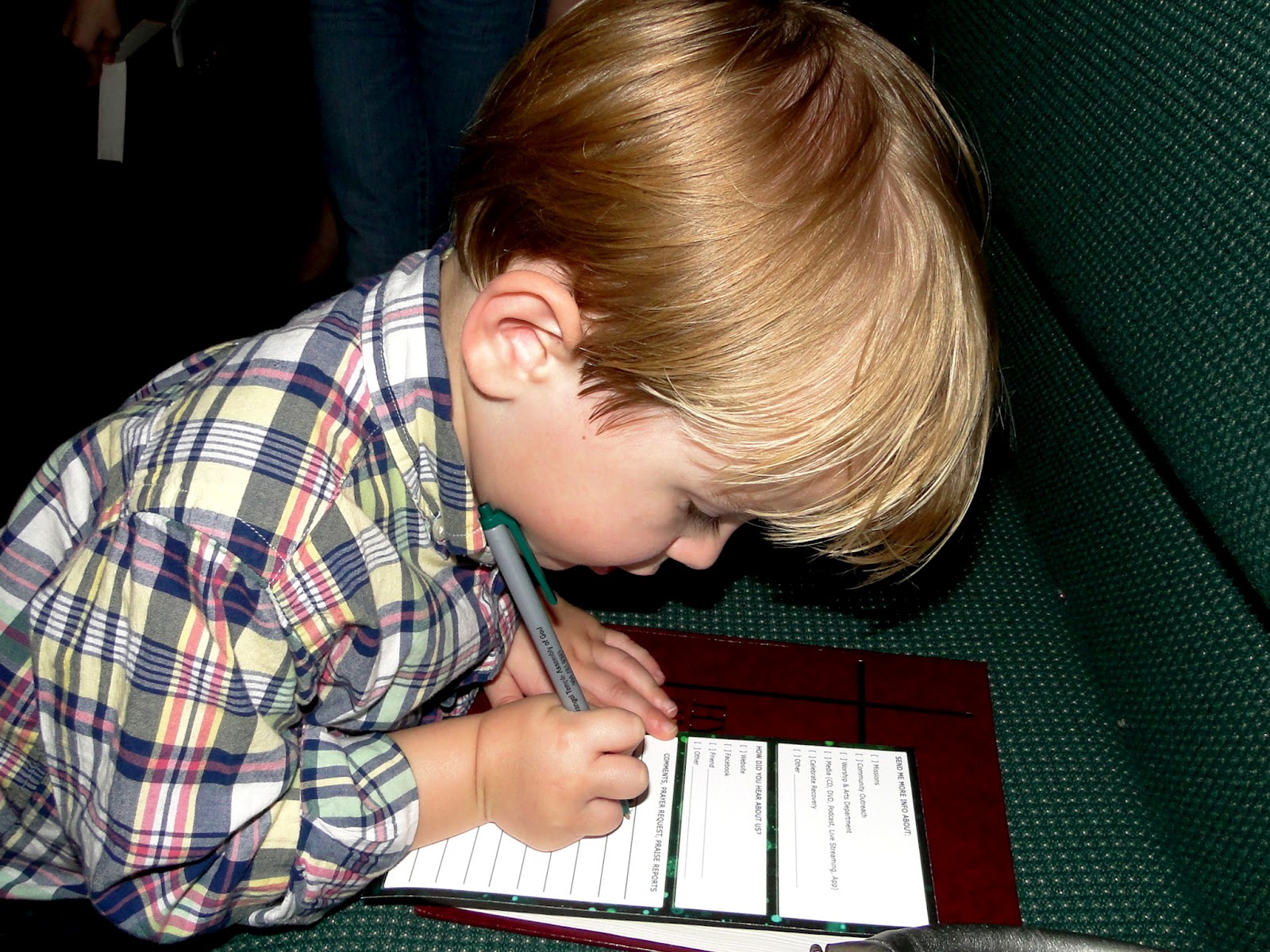 When the girls got back from the potty break Robyn and I discussed the situation and decided to find a good time to head out during the second half of the show. We had a TWO HOUR ride home and it was already past the kids usual bed time. They had such a blast and it didn’t really matter if we left early, plus it made sense to beat the crowds! I’m usually a “stay-till-the-end” type girl (growing up we always hated it when people left early from Braves Games…my mom was hardcore about being a loyal fan!) but in this case it was just smart to head out. Check out this sweaty mess of a dancing machine! 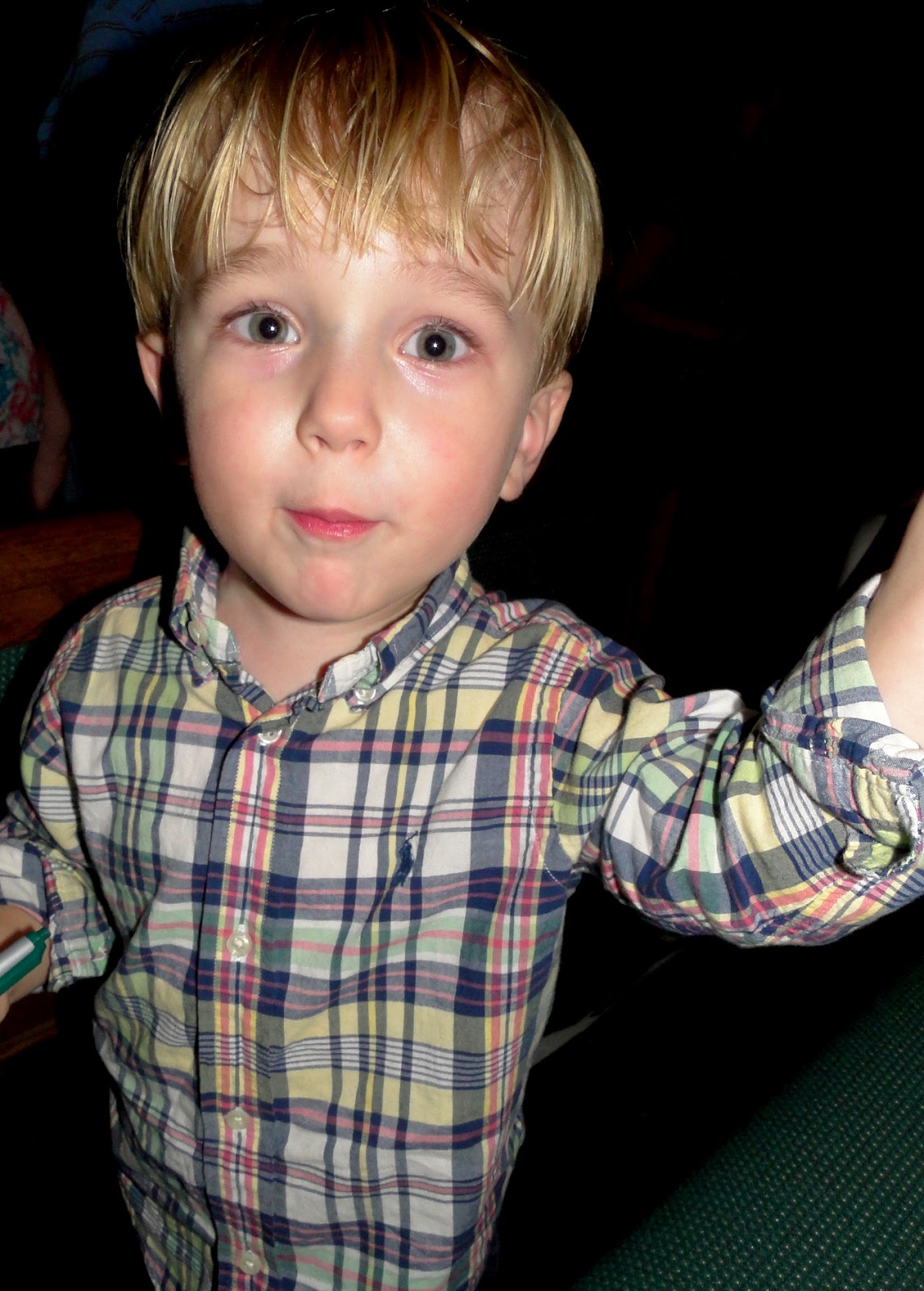 We found a good chance to go after a super lively number. We scooped ’em up and headed out! Once at the car we changed them into pjs and Kye went to the potty in the travel potty Robyn had packed (such a good call!). All the way home they watched a movie…and didn’t sleep a WINK. We didn’t get home until 10:00. FOR SURE Kye’s latest time staying awake EVER. He did a great job going right to bed though and really it was well worth it. He had SUCH a great time! I was nervous at the kind of attitude I’d be dealing with the next day but really he had zero issues. It’s so great that he’d old enough now where we can have special times like these together! 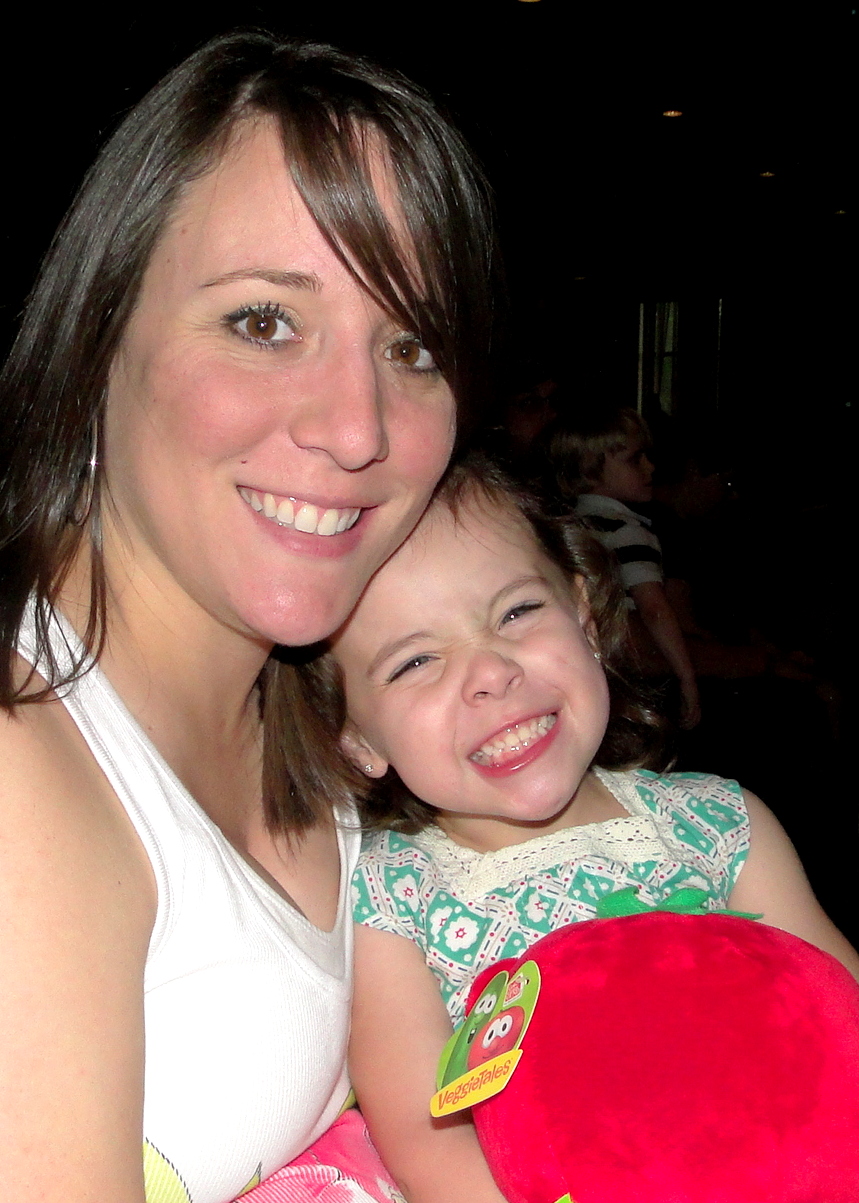 Had to post both of these, I love Lorelai’s facial expressions! 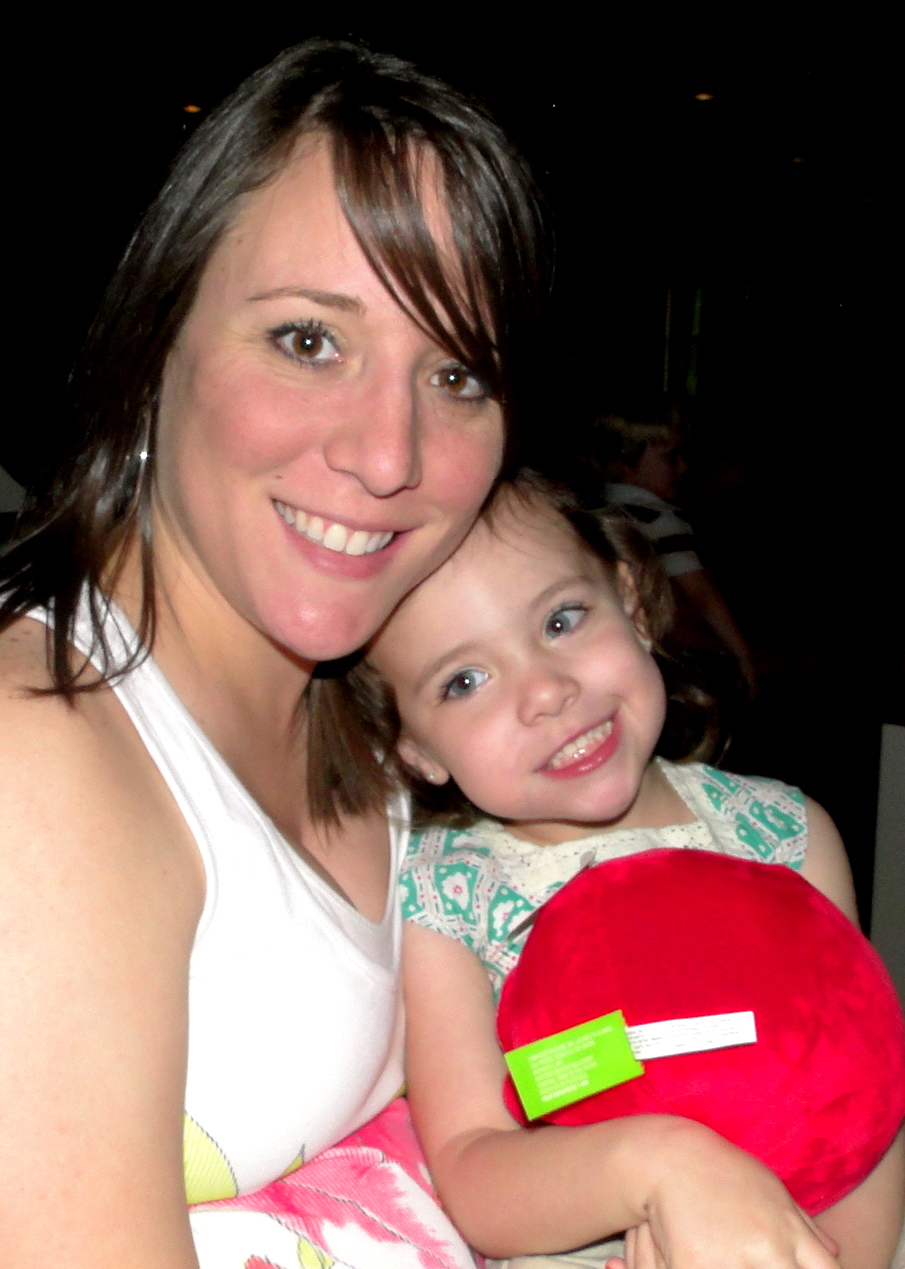 A super fun Mommy and Kye night for sure! 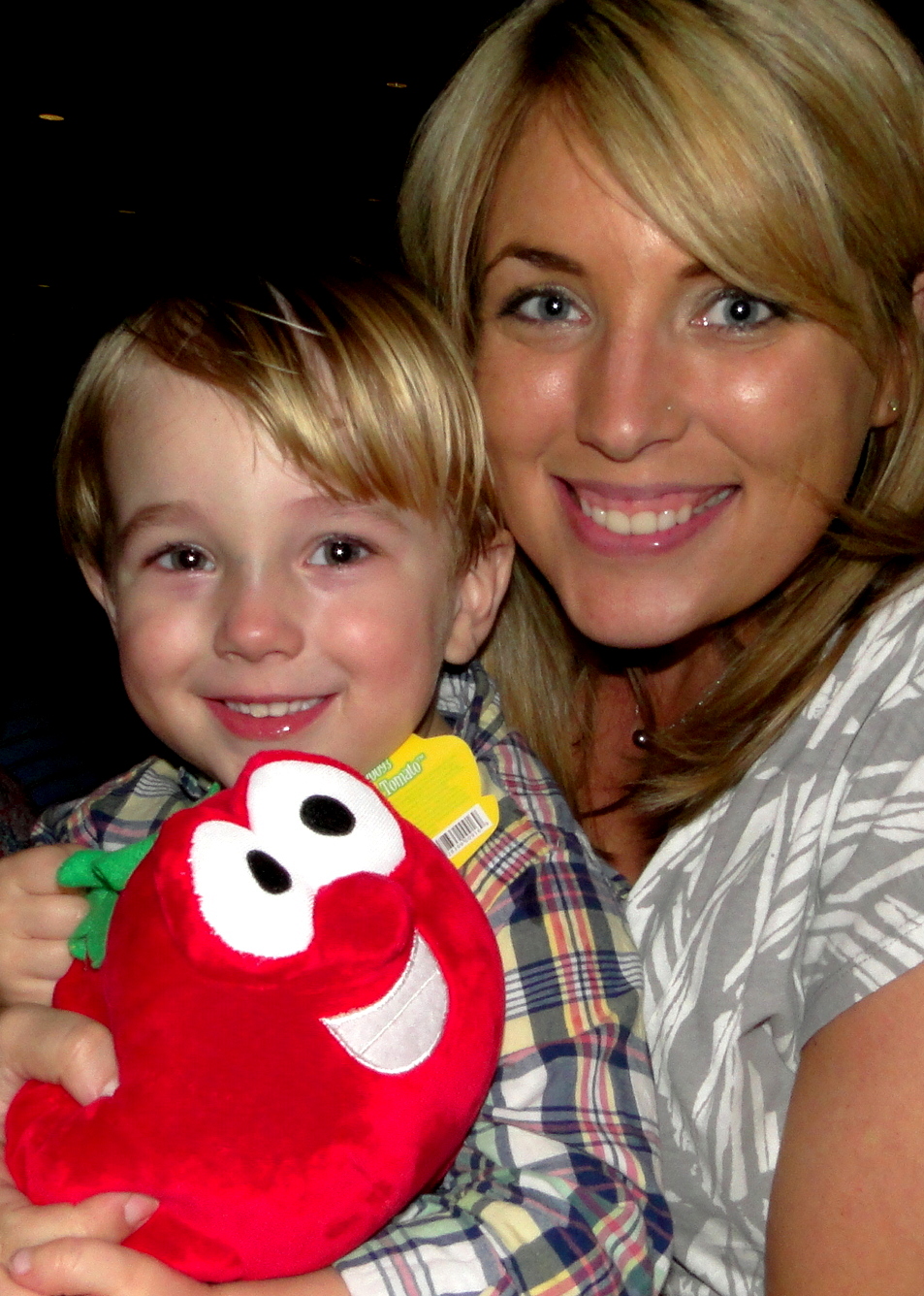 While I didn’t personally enjoy the show that much (what parent really does though?!?) I’m SO glad Kye loved it! I’m also thankful for the fun time with Robyn and Lorelai. I’ve been VERY blessed in the friend department…especially since having kids. It’s so great to have people to do fun things like this with and who have kids the same age as mine. I’m so glad Crissy and Robyn have new babies close to Britt’s age…but they are both DONE having babies. So who are kid #3 and kid #4 gonna hang with?!?!

Thanks again to Robyn for making the long drive and for putting up with my sleepy head self! It was a lot of good bonding time together and I enjoyed it!