and when I first read them I was border-line obsessed with the idea of being a vampire 🙂 I love that they are very romantic stories but yet are also very pure and innocent. There are less than 5 cuss words in all the books combined and the author, Stephanie Meyer, wrote a fun, exciting story while also sticking by her values and morals with the characters.

Since the first movie came out, several of us girls have gotten together and made a big event out of the movie premiere! Here’s a look back at the first premiere and as well as the second premiere. Even though none of us girls are hardcore Twilight freaks, it’s FUN to make a big deal out of stuff so this time, for the premiere of Eclipse, we went ALL out! We planned a girl’s night at Katie’s house before the movie to eat, hang out, and make shirts to wear to the show 🙂

It’s funny how well all my friends know me because everyone made sure to remind me to get myself an iced coffee before coming to the event. I think they all think I’m a little nuts on caffeine but they like it? 😉 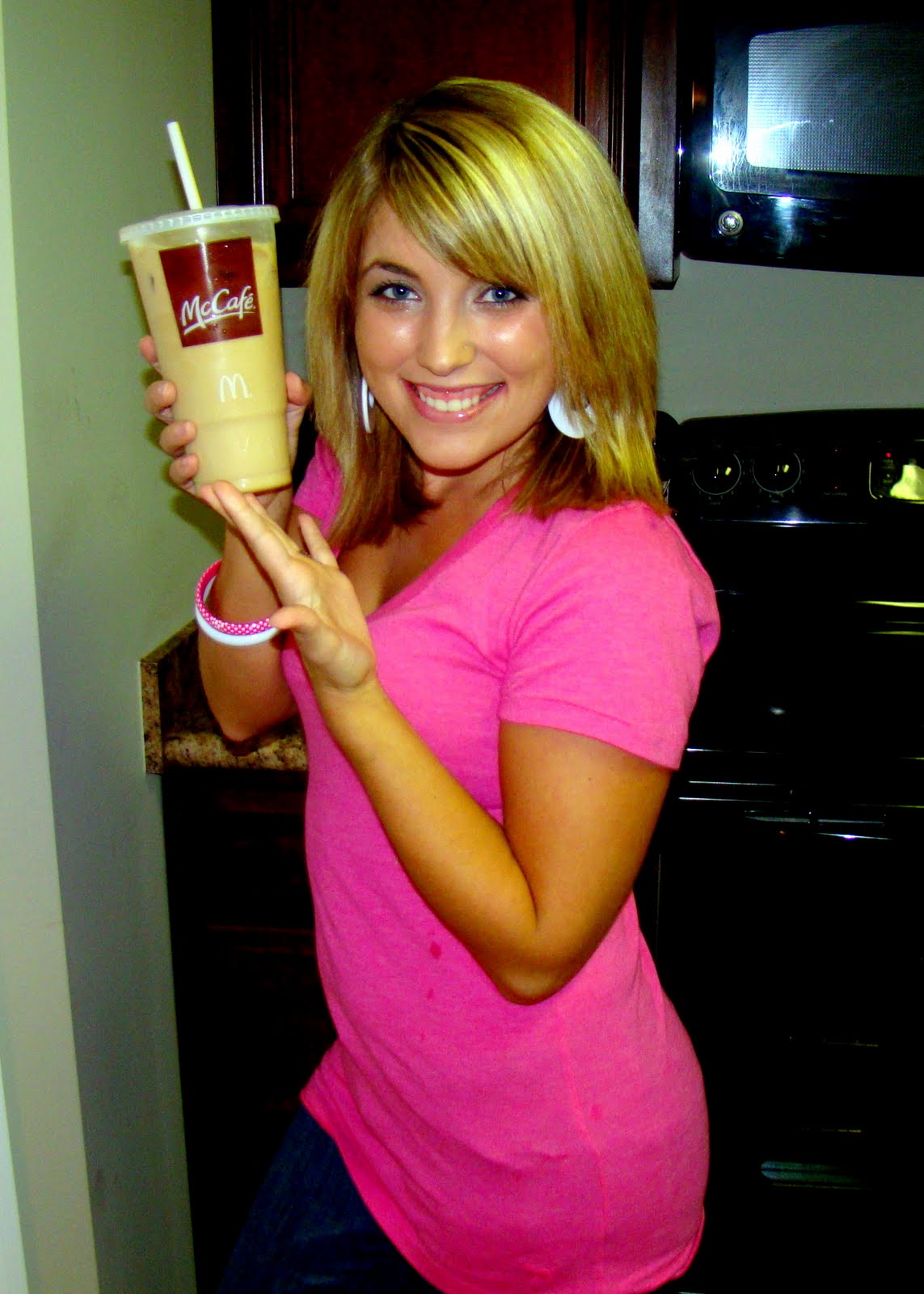 We all bought supplies before the big night but waited to make our shirts together. I was pretty pumped about my 80’s inspired look but couldn’t come up with a catchy phrase for my shirt. Everything I thought of was pretty inappropriate so it took me awhile to decide what to say on it! 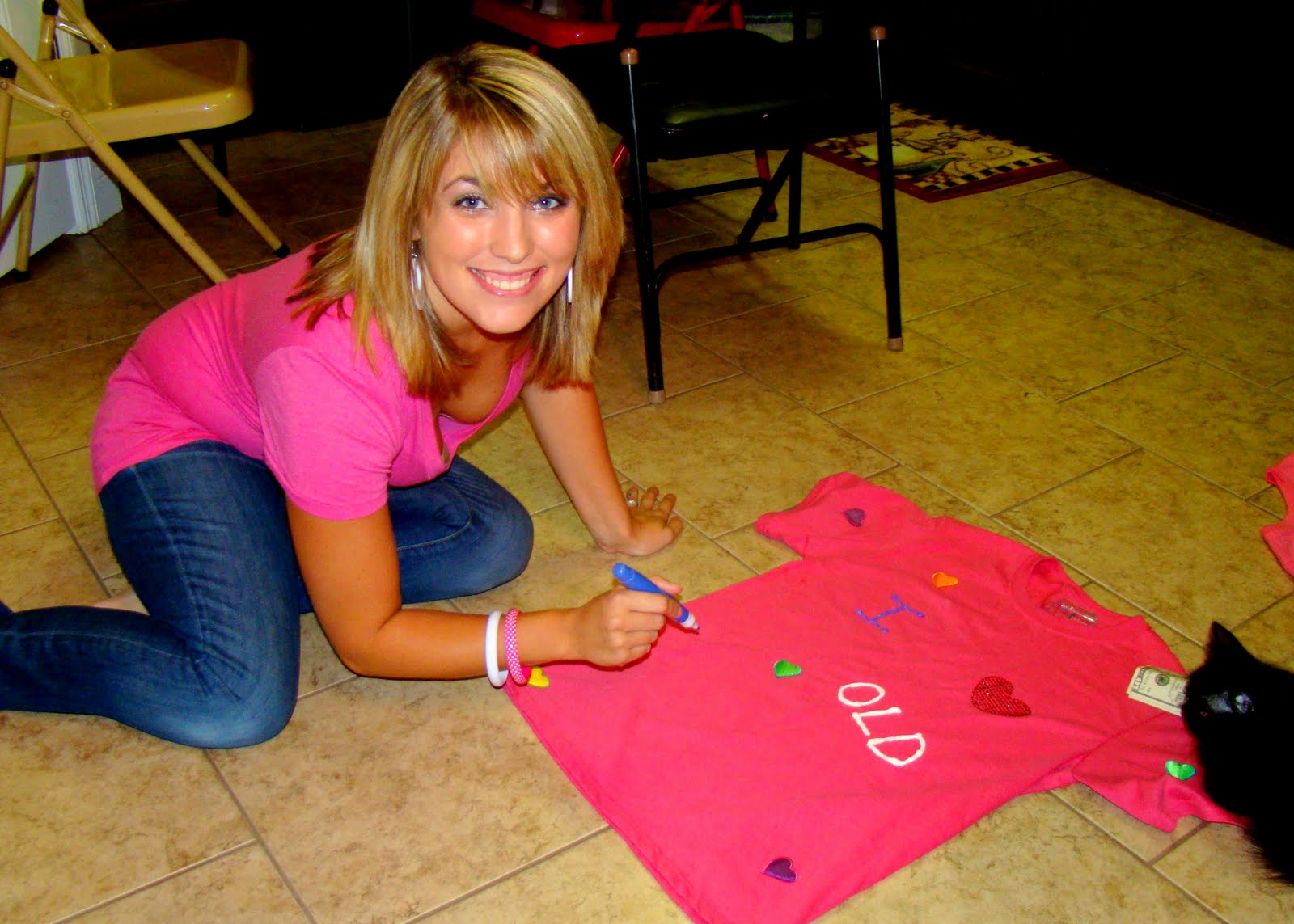 Ashley was cracking us all up…she’s going to be an Elementary School teacher so I think she needs some help in the handwriting department haha. And she used SO much paint that it never dried. It ended up smearing all over everything haha 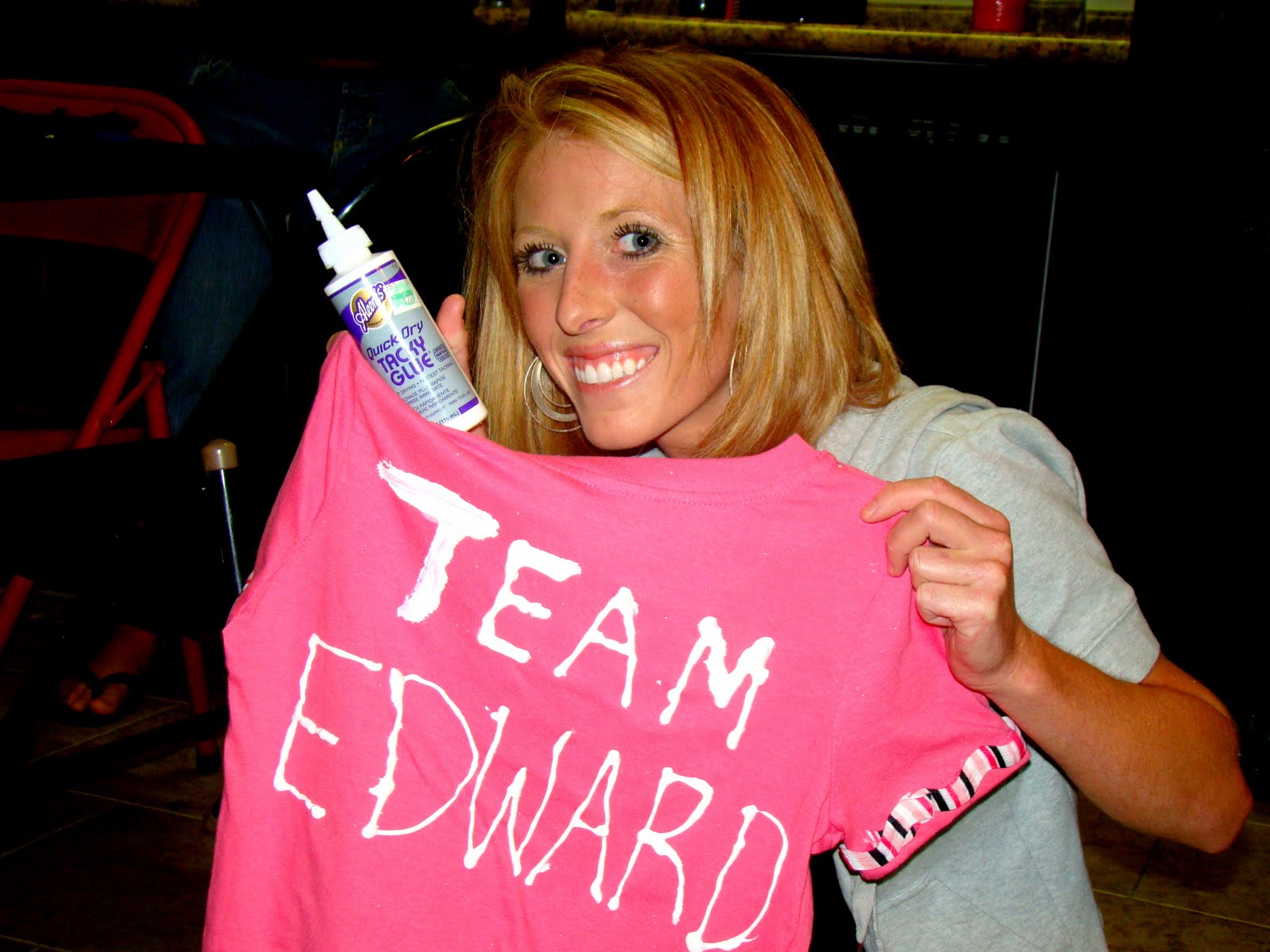 Of course Crissy stole the show. Was there ever any doubt that she would? I told Zach the next day that we are all a pretty cool group of girls but that Crissy is by far the coolest. 8 months pregnant and rockin’ a hairy shirt with a matching Jacob doll? Pretty cool if you ask me! Even though she’s rootin’ for the wrong team I still love her 🙂 I decided to go with Crissy’s theme…she loves hairy guys since she is Team Jacob and I love old guys since I’m Team Edward (duh he’s the best!). Katie and Hannah hooked us up with headbands too…love ’em! 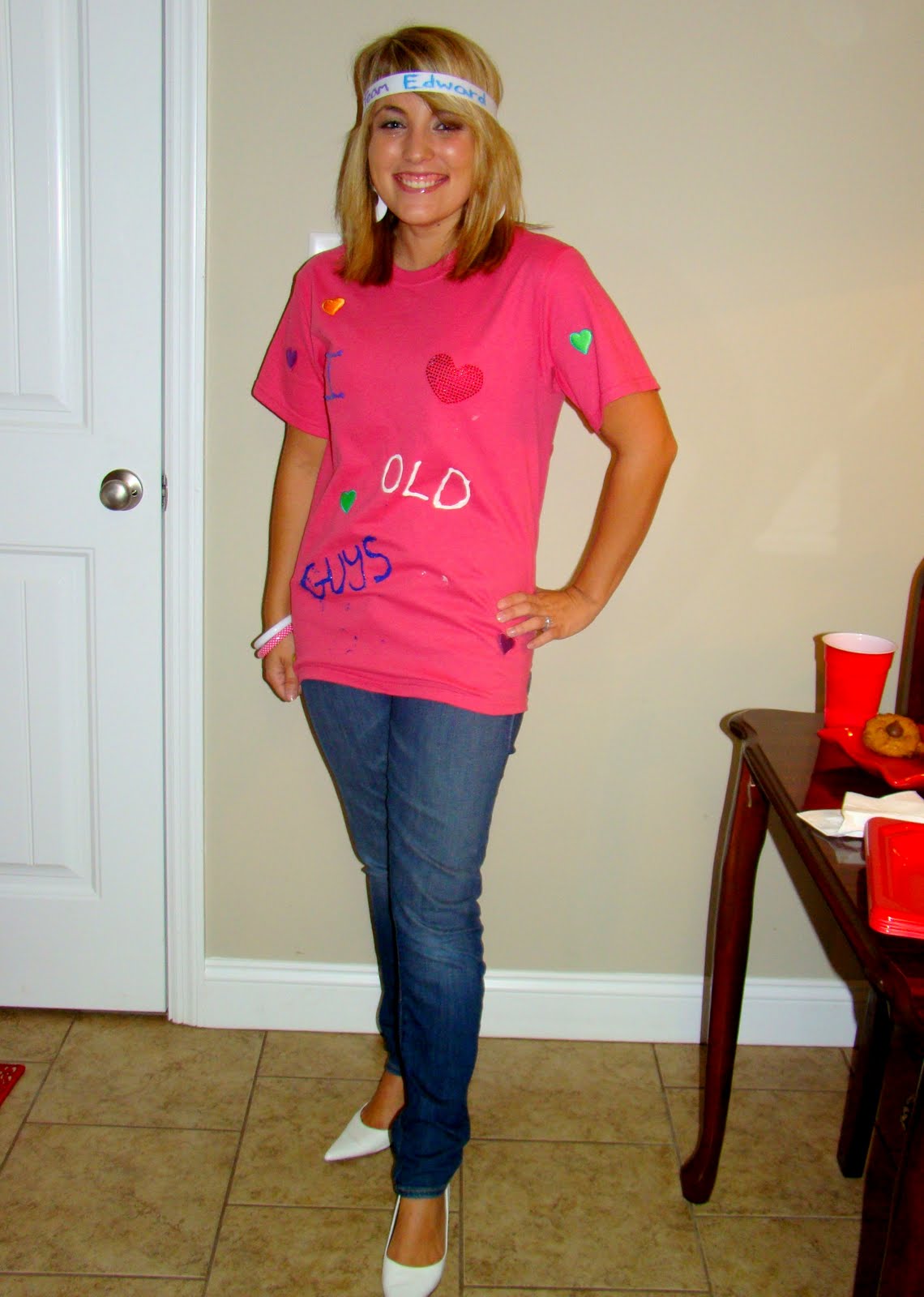 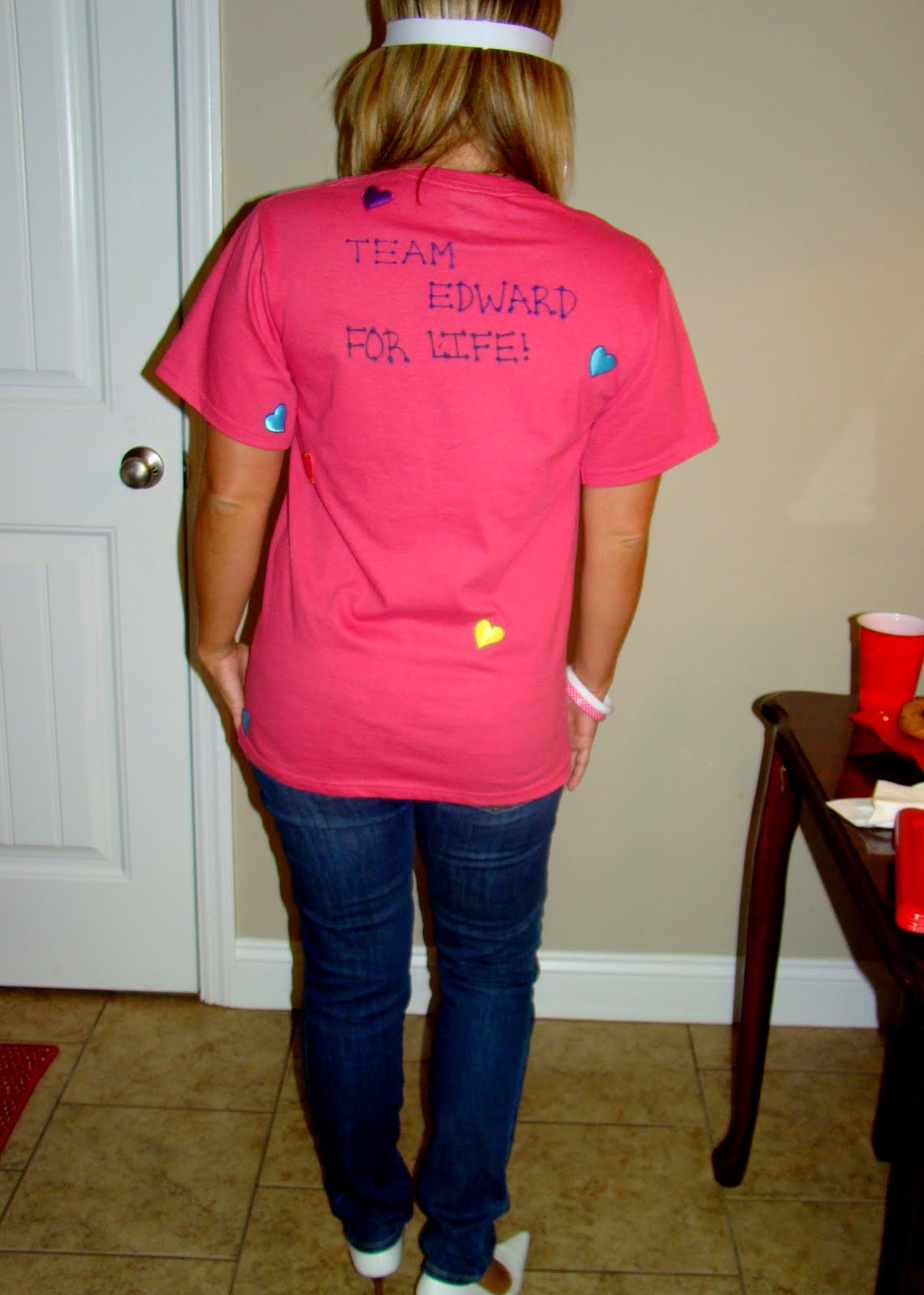 Hannah and Amber were so cute together! It made me miss being young and silly with my friends (oh wait…I stayed up all night making ridiculous t-shirts about vampires…I think that qualifies as silly doesn’t it?) I felt SO bad for Hannah though as she started throwing up and ended up not being able to go to the movie with us 🙁 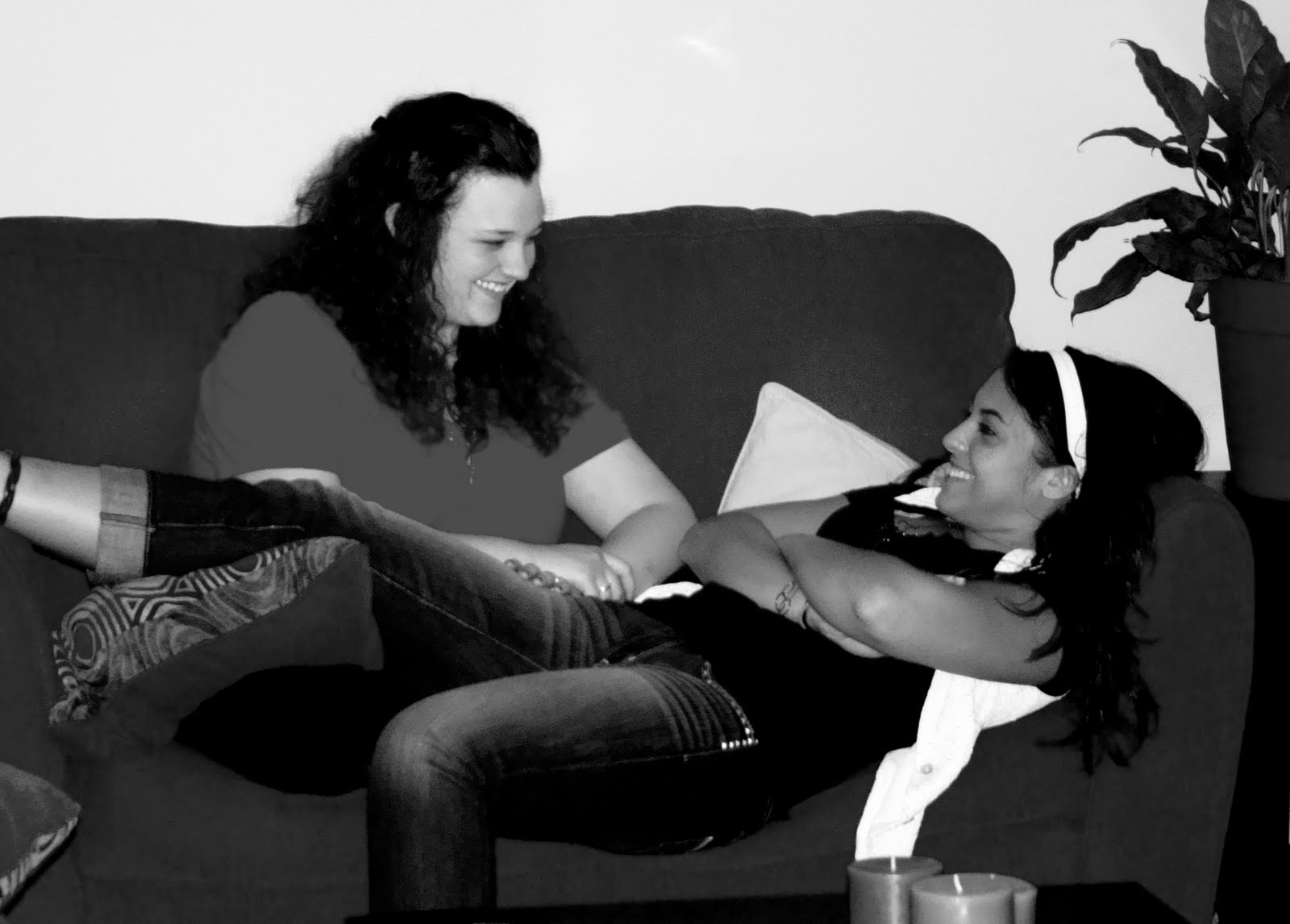 Katie, being the awesome sister she is, stayed back to take care of Hannah so she didn’t get to go to the movie either. She actually sold one of their tickets for double the price they bought it for! The other one she gave to me and I gave it away to some girl while in line to get in the movie. Ashley cracked me up because after the girl left Ashley said I should have told her that Jesus loves her haha we made sure to tell plenty of other people how much Jesus loved them before the night was over though! 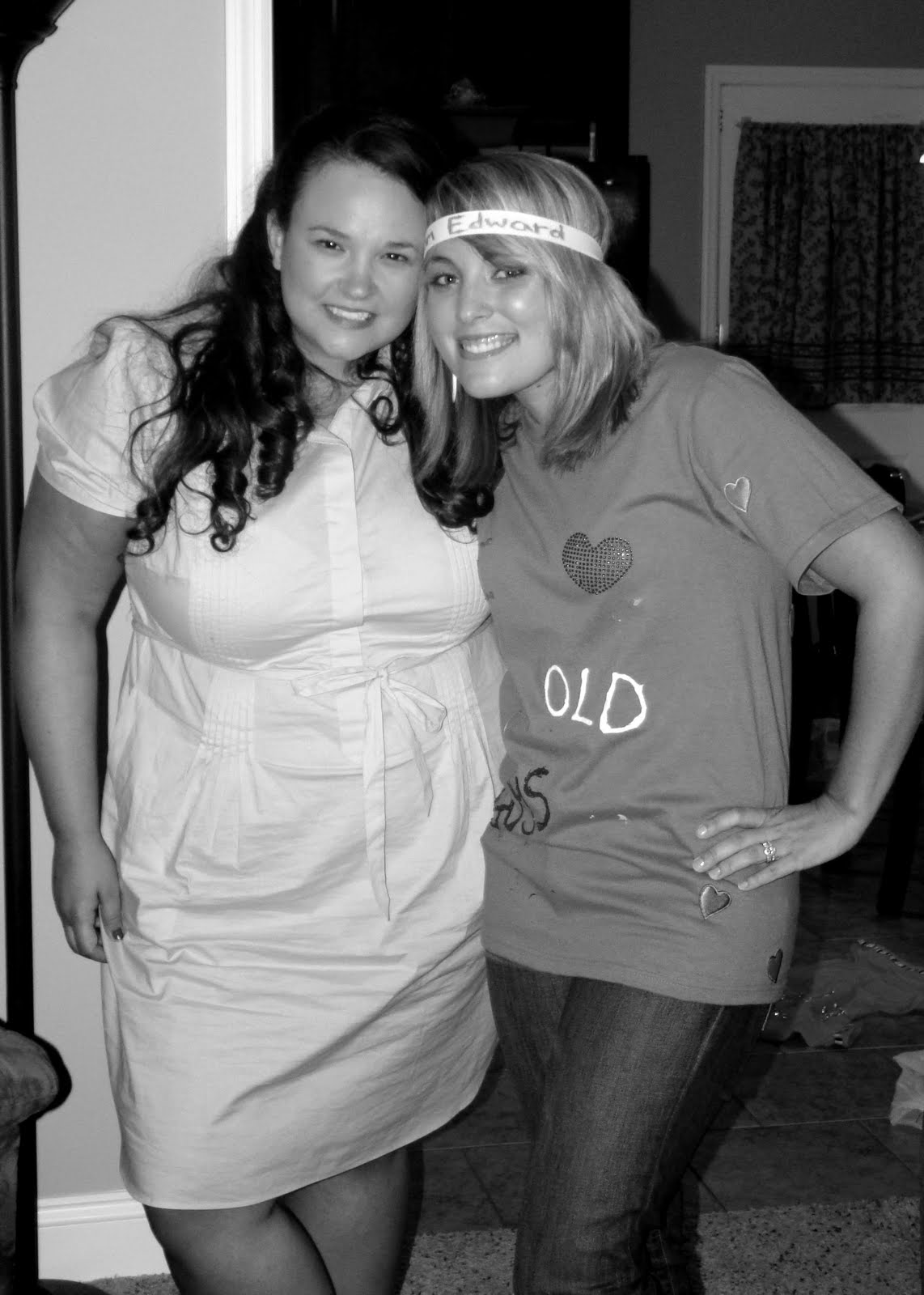 Over the weekend I was MEGA sick. I never throw up but I did three times (even through my nose…SICK). I still wasn’t 100% over it in time for the movie and drinking that HUGE coffee probably wasn’t the best plan because I ended up having severe gas allll night. I was stinkin’ up the theater and Katie’s living room. This makes me laugh so hard because Crissy was DYING from the stench and no one would stand next to me for the group picture haha. 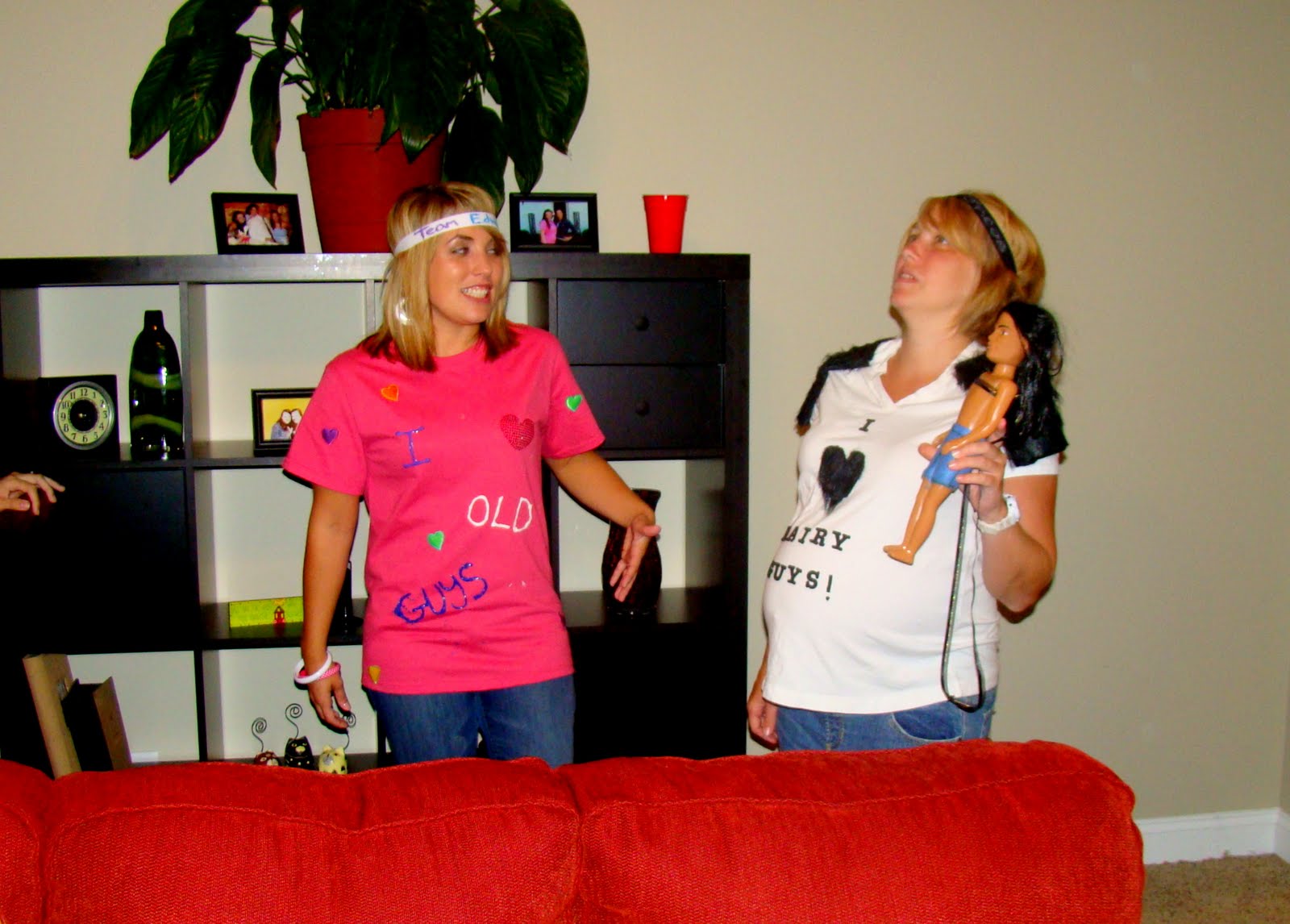 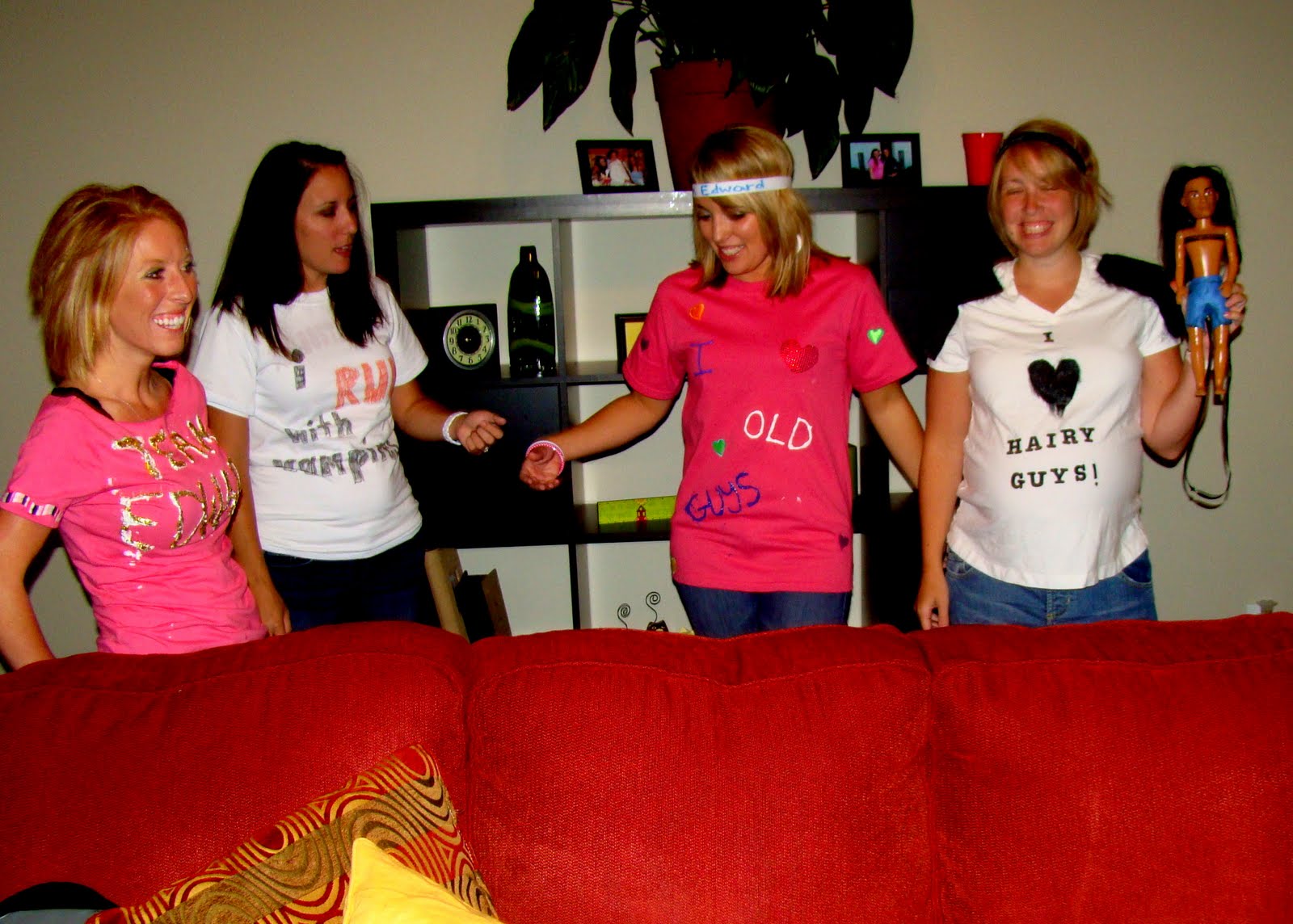 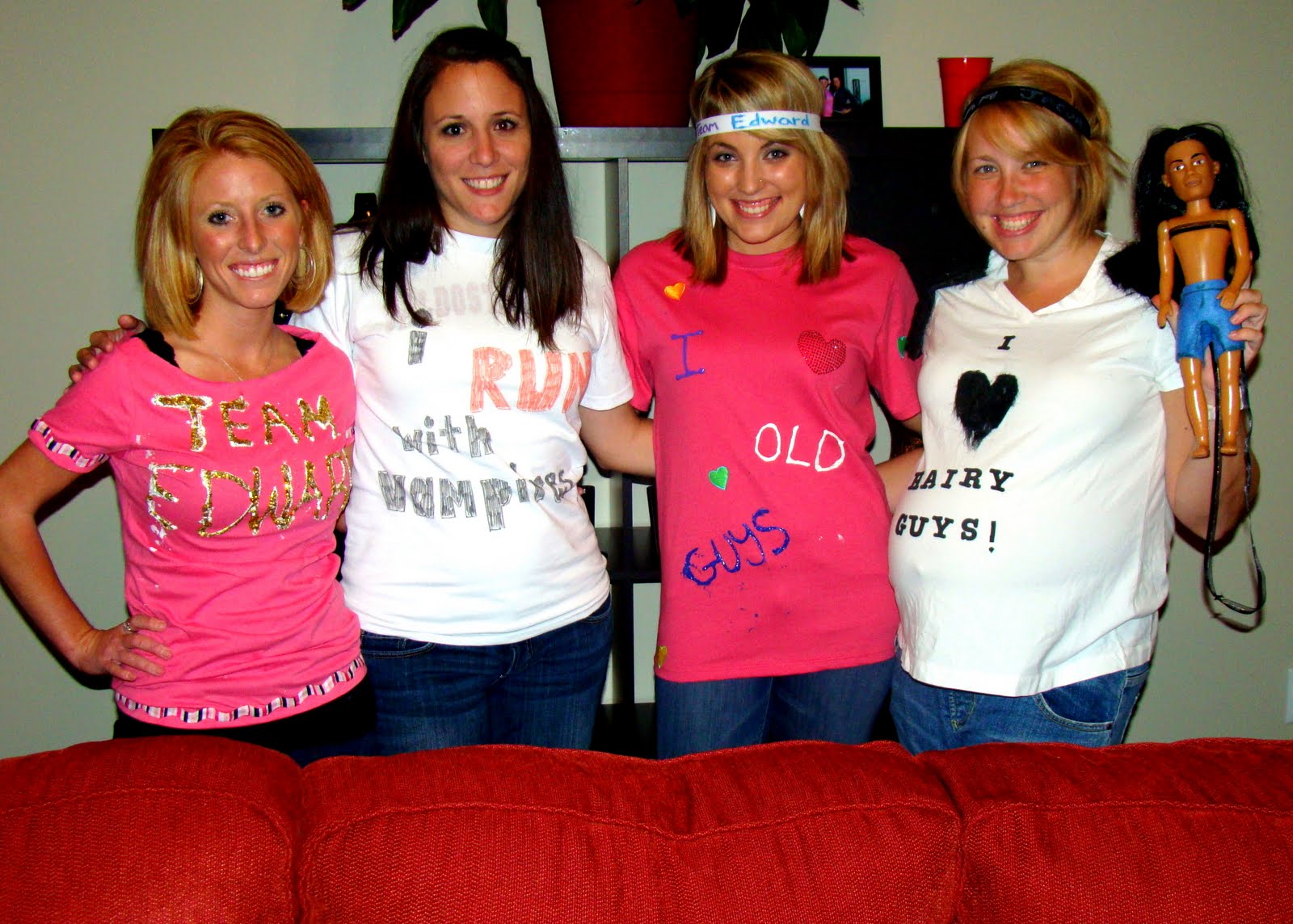 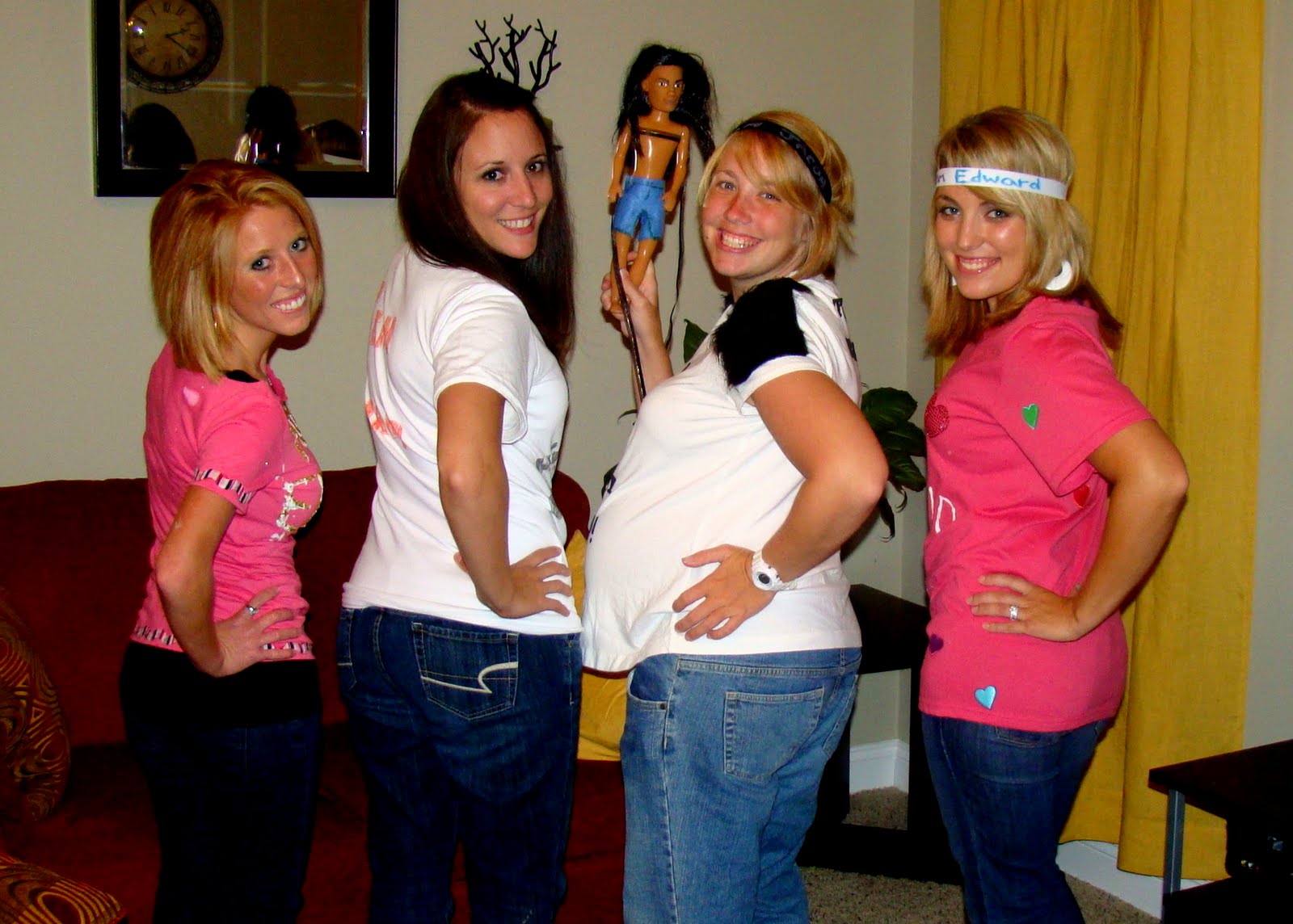 Casey had to meet us at the movie but I made her a headband to go along with the shirt she made so she’d fit in! She was Team Jacob (so lame!) but I can’t hate on her too much because she did help us cut in line 🙂 I’m glad she was able to come with us and we all had a great time laughing and joking around in line waiting to get in the movie (we got there at a little after 10 and the movie didn’t start until midnight!) 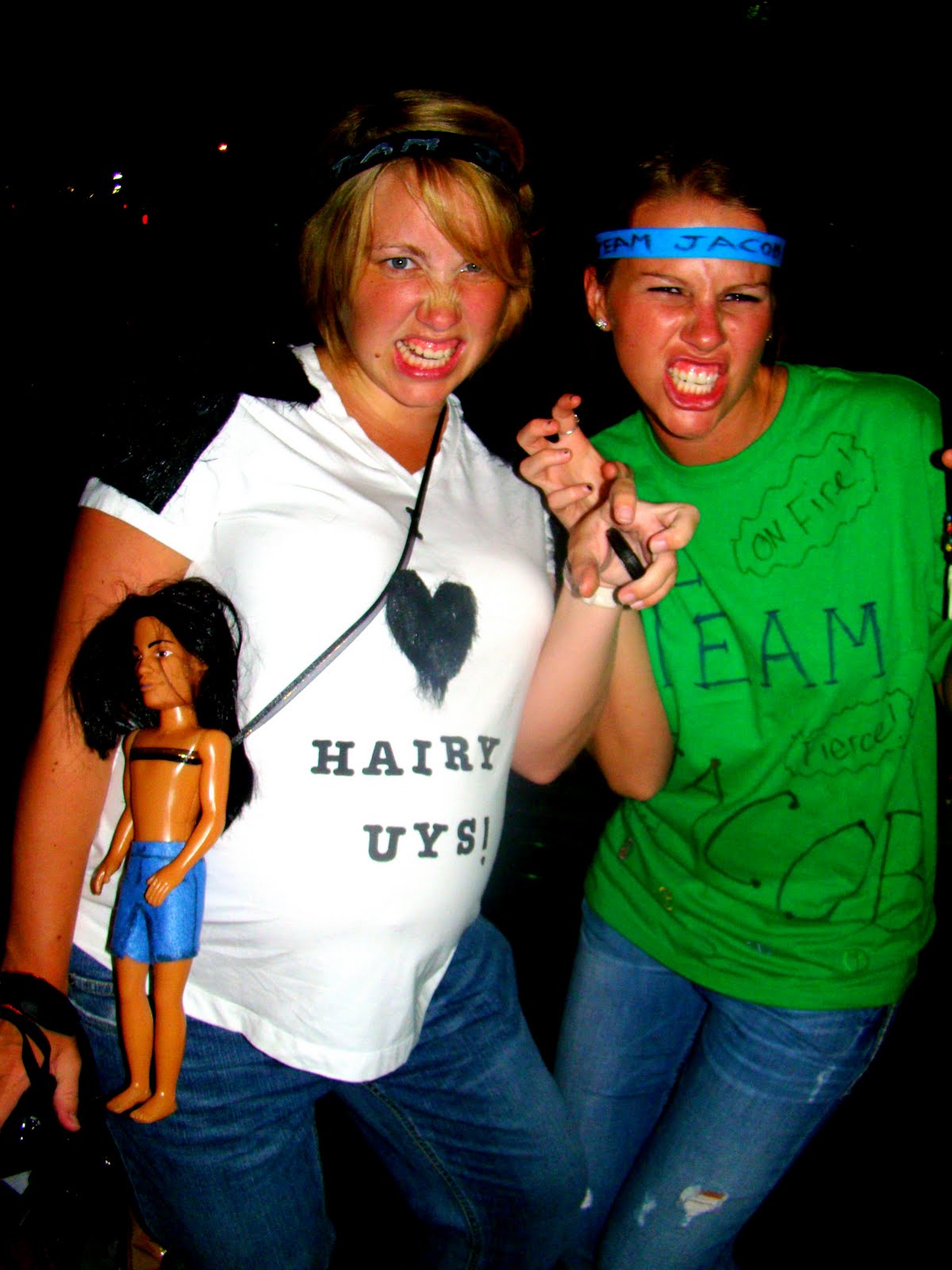 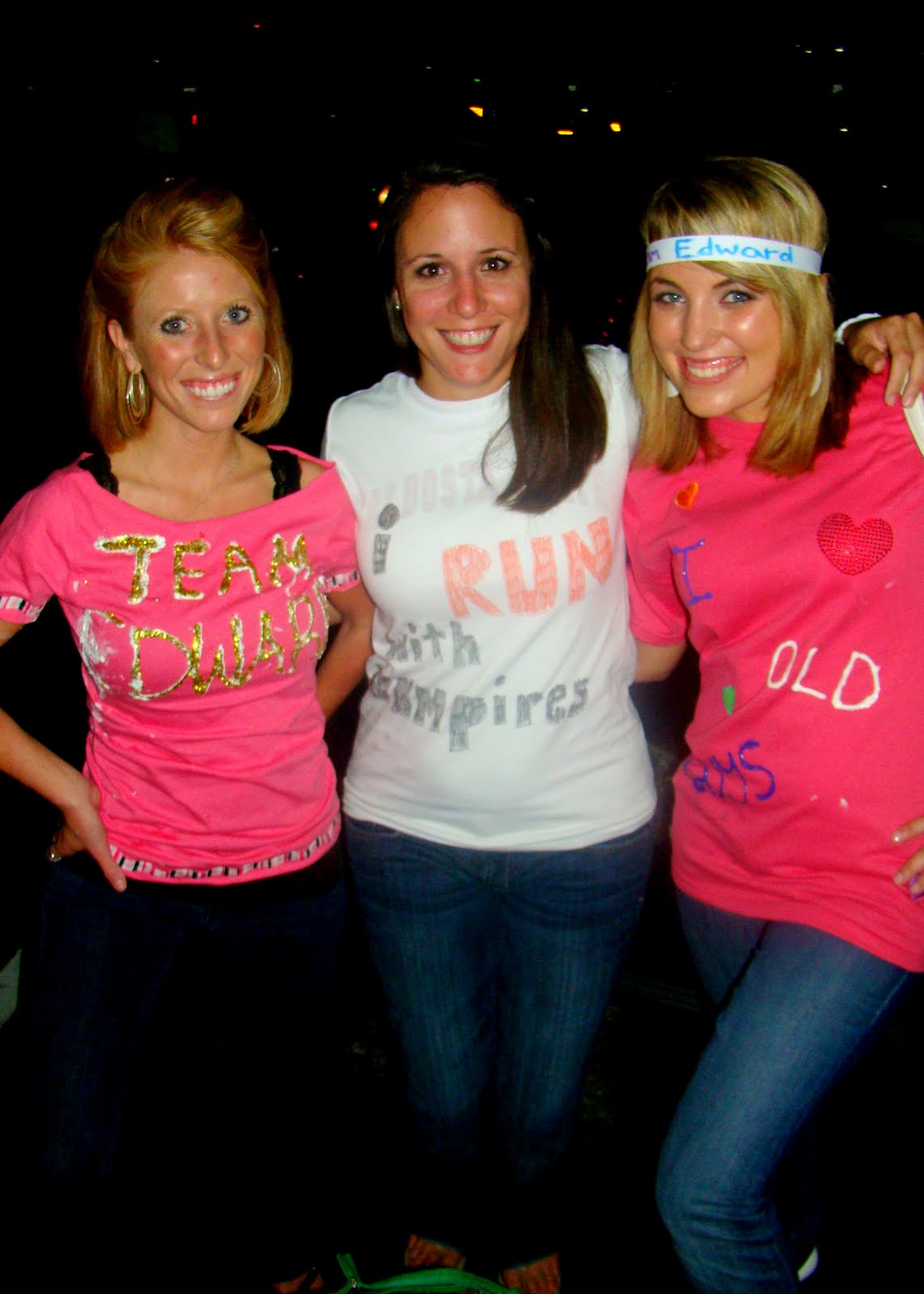 Group shot! No one wanted to touch Ashley’s shirt haha Robyn is like a mile away from her! You can see how nicely it smeared allllll over her Coach purse. So sad 🙁 She didn’t let it stop her from having a great time though! 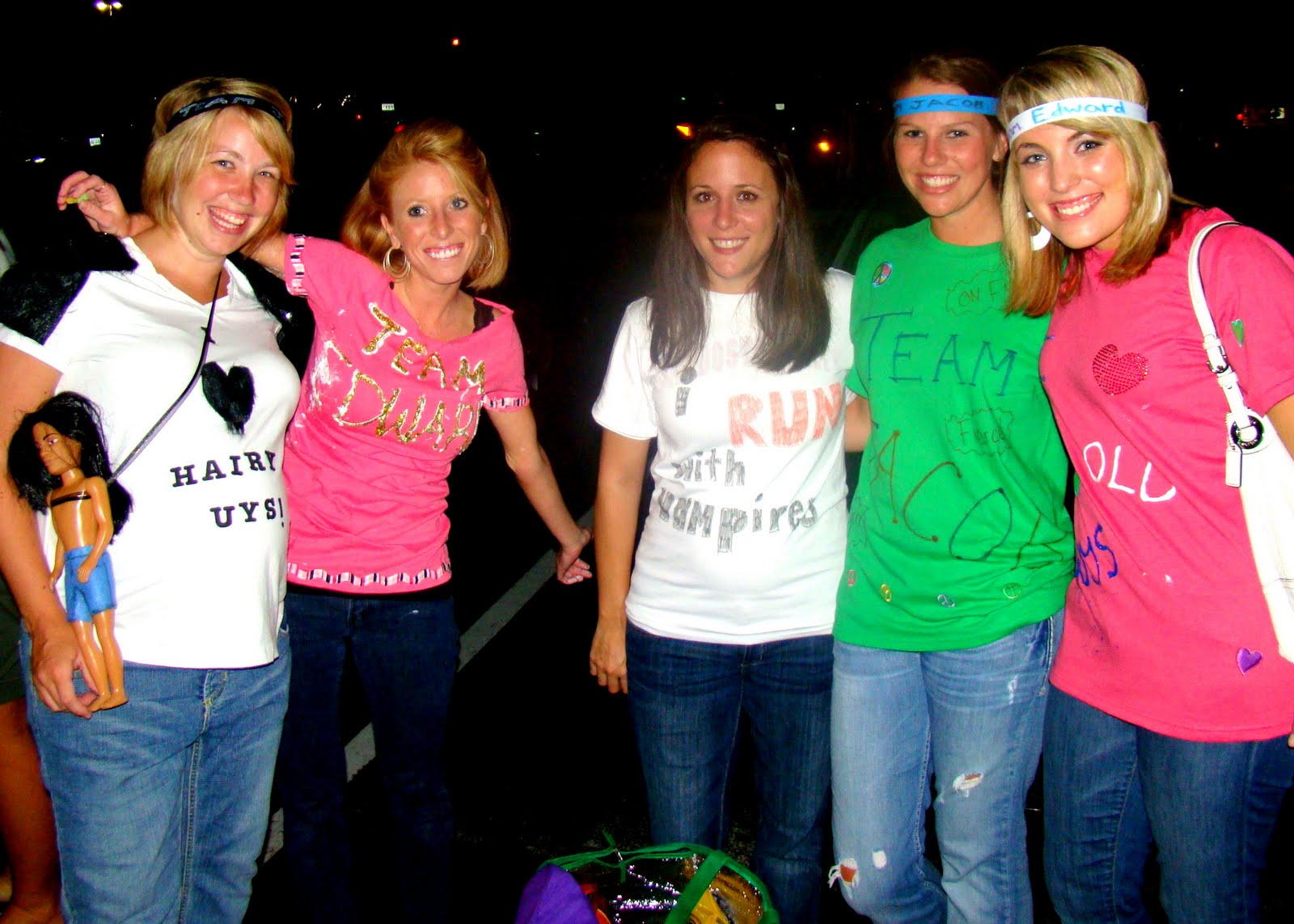 It was a REALLY fun night. I really don’t remember much of the movie because I was seriously in the worst gas pain of my life. I had my pants unbuttoned and my hand massaging my bladder through the whole thing. On the way home I could barely drive and at one point I seriously debated just crapping my pants. I was wearing my favorite Gap skinny jeans though so I just couldn’t bring myself to risk ruining them. I thought for SURE there would be a little “surprise” in my undies once I finally made it to a toilet but thankfully (magically?) they were poop free! Poor Crissy was sitting next to me and with her prego-mega-smelling-power I’ll bet she was DYING haha.

Even with the gas issues it seriously was SUCH a fun time! I felt kinda lame being 25 with a kid and being decked out like that but it was all fun and all the looks we got were hilarious. One guy came up to me and said “TEAM JACOB” hahaha like he really thought I’d do something about it? I’m really sad that the next movie won’t be out until Nov of 2011…we need to plan a girl’s night again before then FOR SURE!