When we built our home (back in the fall of 2010) we put a LOT of thought into it all. Finding a floor plan that fit our needs was difficult. I did not want a split floor plan and I also wanted three bedrooms downstairs, including the master. My plan was to always have the baby and the toddler downstairs with us. I didn’t like the idea of having a young child upstairs by themselves nor did I want to be going up and down the stairs a million times a day. Our plan was to have kid #1 and kid #2 (Kye and Britt obviously) stay downstairs until kid #3 came along. At that point kid #1 (Kye) would move upstairs. Then kid #2 and kid #3 (Britt and Leo) will be downstairs with us until kid #4 comes along. At that point kid #2 (Britt) will then move upstairs. Kid’s 3 and 4 will stay downstairs until the older ones move out from home, unless we do some kind of rearranging due to other reasons once they are older (like if kid #3 is a girl it may make sense to bring kid #1, Kye, back downstairs and let the two girls have the bigger upstairs rooms for the closets as well as bathroom sharing).

Now that we are expecting kid #3…the time has come to move kid #1 upstairs. I was NOT in any kind of hurry to make the move! Up until this point the two upstairs bedrooms have been being used for a playroom and a guest room. So the first step to allow Kye to move upstairs was to finish the new playroom. At the time we moved him up, it wasn’t 100% done still so that’s why I haven’t posted on it yet! I think we are about at that point so I’m hoping to blog about it soon. Trust me, it’s worth the wait 🙂

In order to get everything done before Leo is born our plan was to finish the playroom, then in March move Kye upstairs to his new room (which is the former playroom), in April transition Britt to the big girl bed (so we could move out the crib for the baby) and in May get going on transitioning Kye’s former room into the nursery.

I am really big about preparing my kids for transitions. I like to make them as easy as possible on all of us and Kye was VERY excited about his new room. We talked a lot about responsibilities. We taught him how to open the gate on the stairs so he can go up and down on his own. We talked about how he will need to start making his bed each morning and after nap. We talked about how it’s important to always turn off his lights when he leaves the room (in his bedroom downstairs he couldn’t reach the light switch due to furniture in the way). We talked about still not getting out of the bed until his lamp turns on (we have a lamp on a timer that comes on at 7:10 each morning and at 3:00 each afternoon to let him know it’s time to get up).

We have been talking to Kye about it for over a year and he knew when he turned 5 that part of getting to be 5 was moving upstairs. He originally really, really wanted to have a Lightning McQueen themed bedroom. Ugh. Finally we did change his mind and he’s totally happy with the football theme. His old room was golf themed and I wanted to be able to still use all the same bedding from that room so football worked well 🙂 We still aren’t completely done with his room yet so a post should be coming eventually once it’s done! I like that a sports theme allows him to keep it for a long time rather than a character theme that would, I’m sure, be needing to change as he gets older. I really, really loved the golf room but think the football room will be something we love too!

Leading up to the big move the kids and I took out everything we could to allow Jordan and Zach to move the furniture as easily as possible. Kye worked SO HARD and really did majority of it on himself. He kept asking “what else can I do???” He asked me to take these pics and had me text them to G-Mama and Colt and Payton 🙂 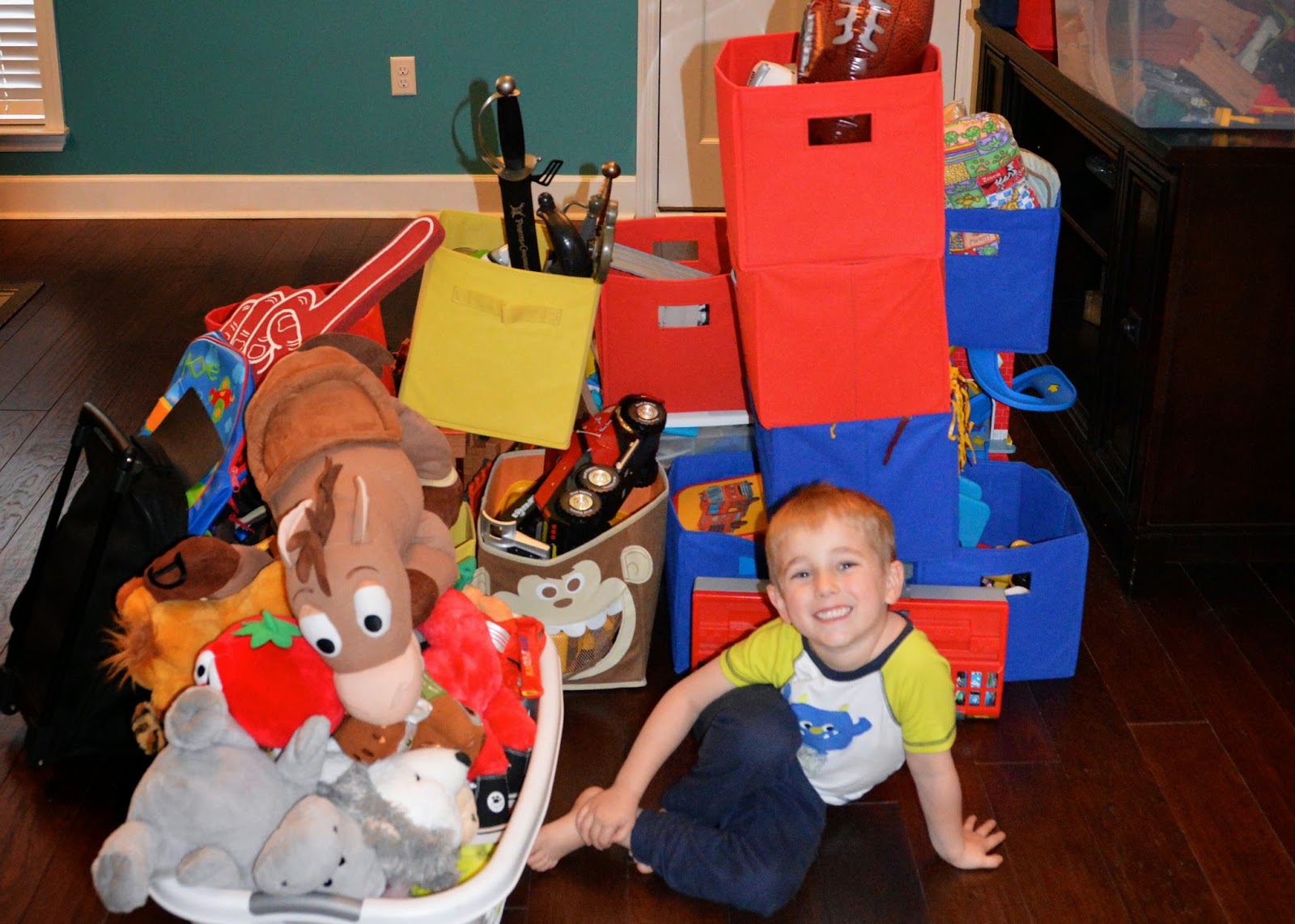 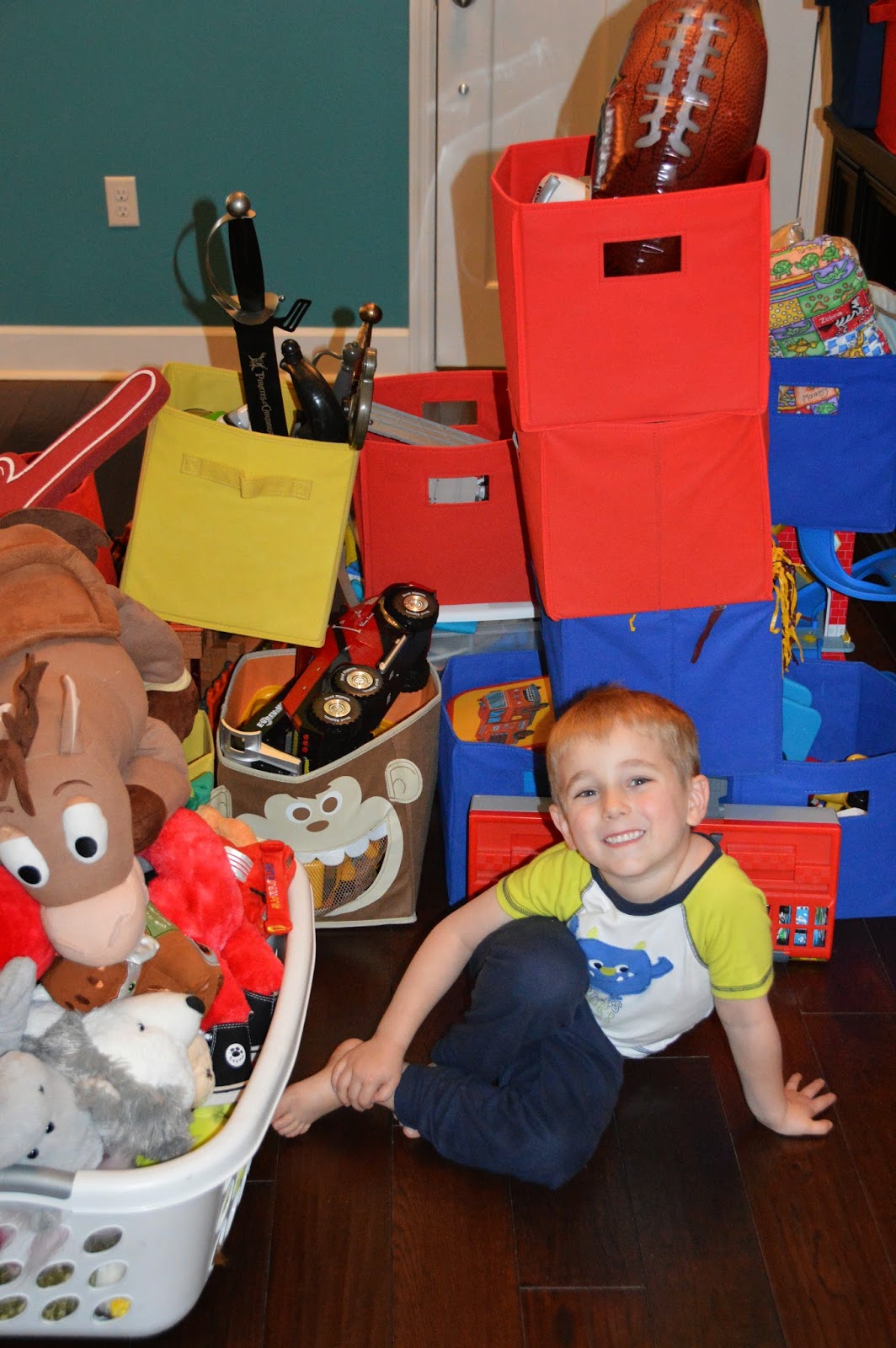 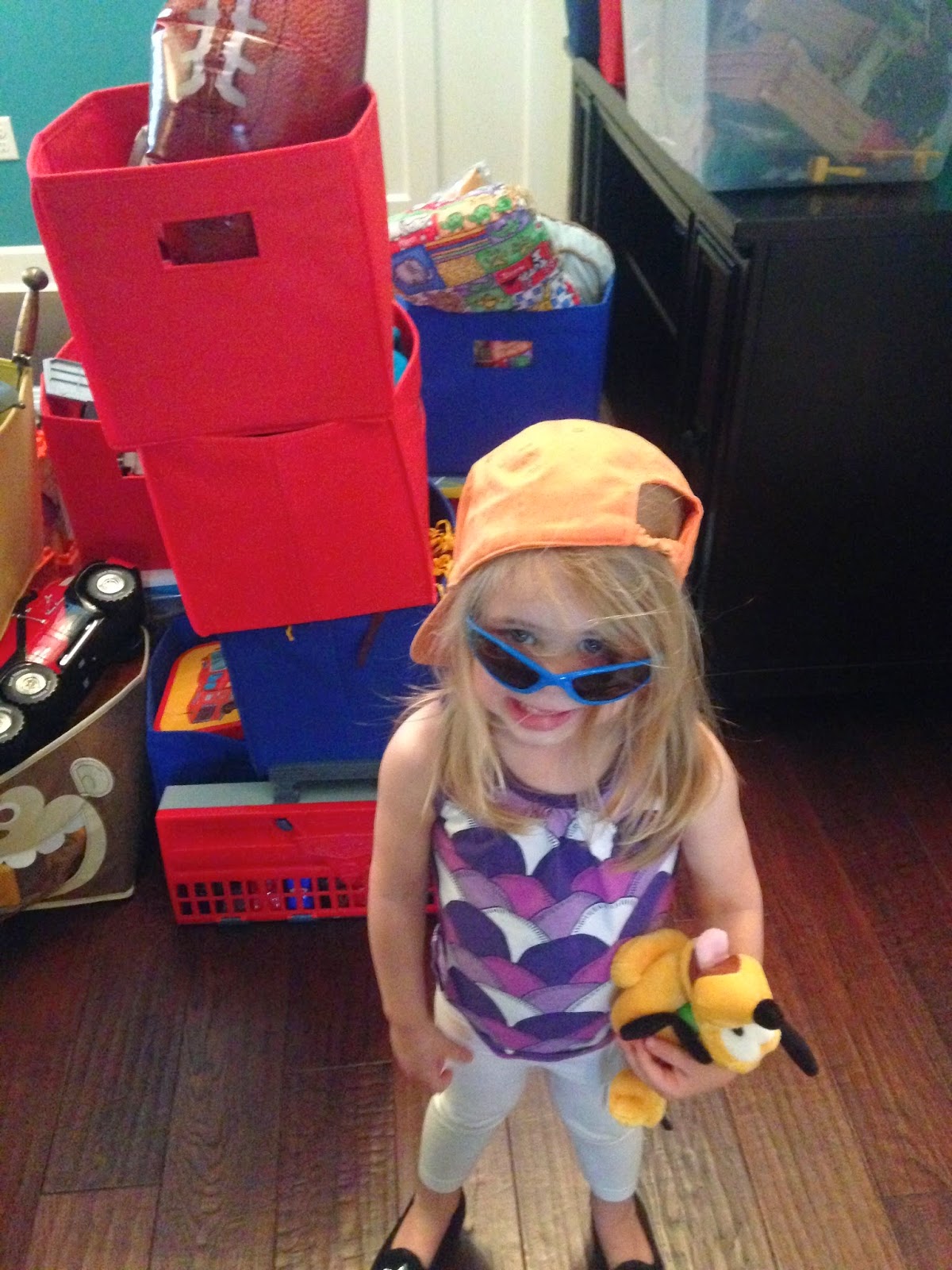 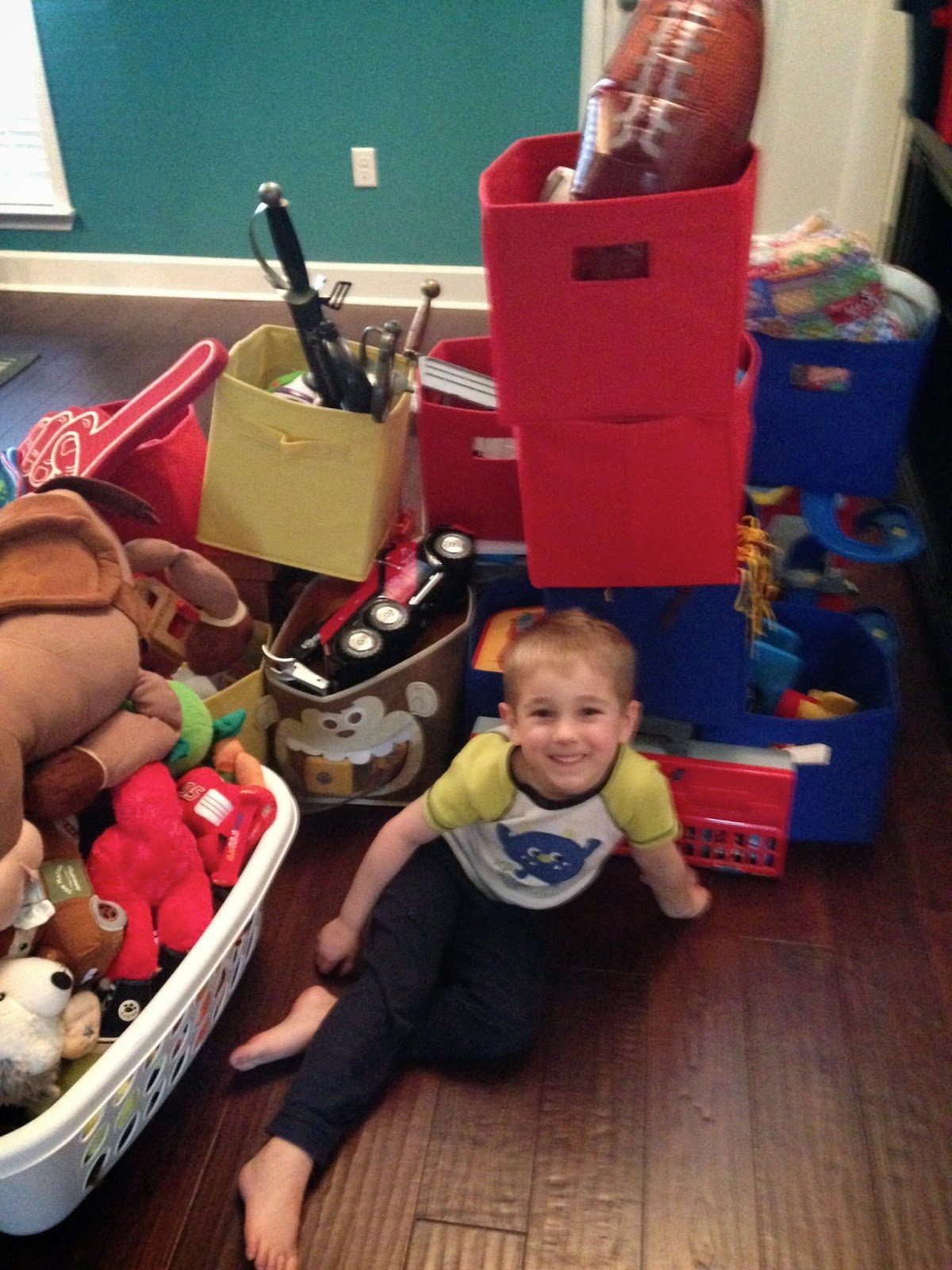 We decided to make the transition on a Saturday because that way Jordan could come first thing in the morning and move the furniture with Zach and we could get everything moved and settled before nap time. The night before we moved him, BOTH Zach and I got surprisingly very emotional about it. He’s been right across the hall from us for so long. Him turning 5 is just a number…but moving upstairs? It’s such an official step into “big boy” status. It surprised both Zach and I how we did feel so sad and sentimental about it. But we did. And I have to say that the “last night” in his downstairs room was much, much more difficult for me emotionally than once he actually moved.

Last time tucking him in downstairs! 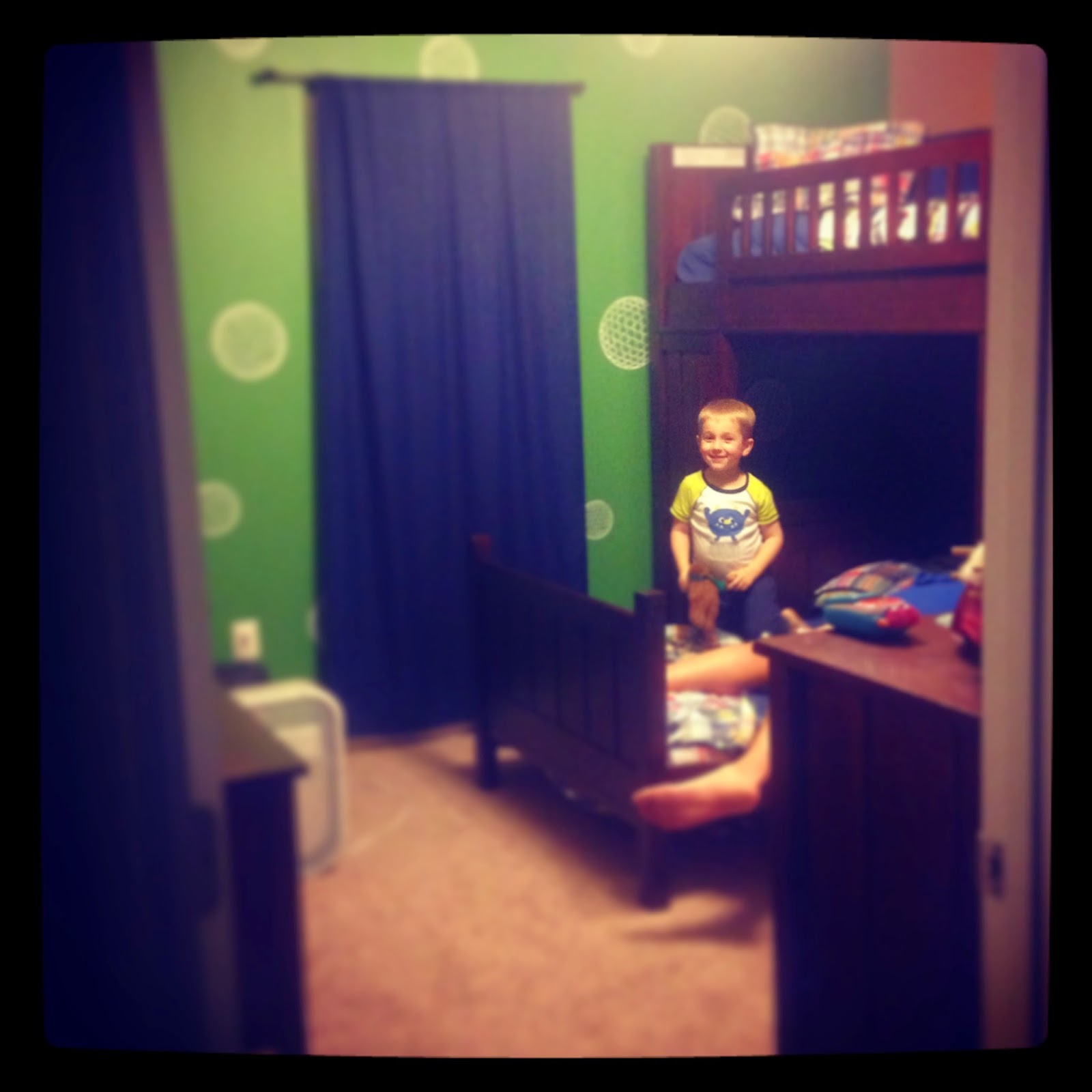 The next morning Kye woke up ready to get to work! We actually ended up going with the SAME color for the room as his golf room. I just love the way the tan looked and thought it gave off a very “sportsy/football” vibe. It was pretty easy to cover the yellow of the old playroom but did end up requiring a second coat so Kye was able to help make that happen! First time ever painting…and it’s neat that it was for his own room 🙂 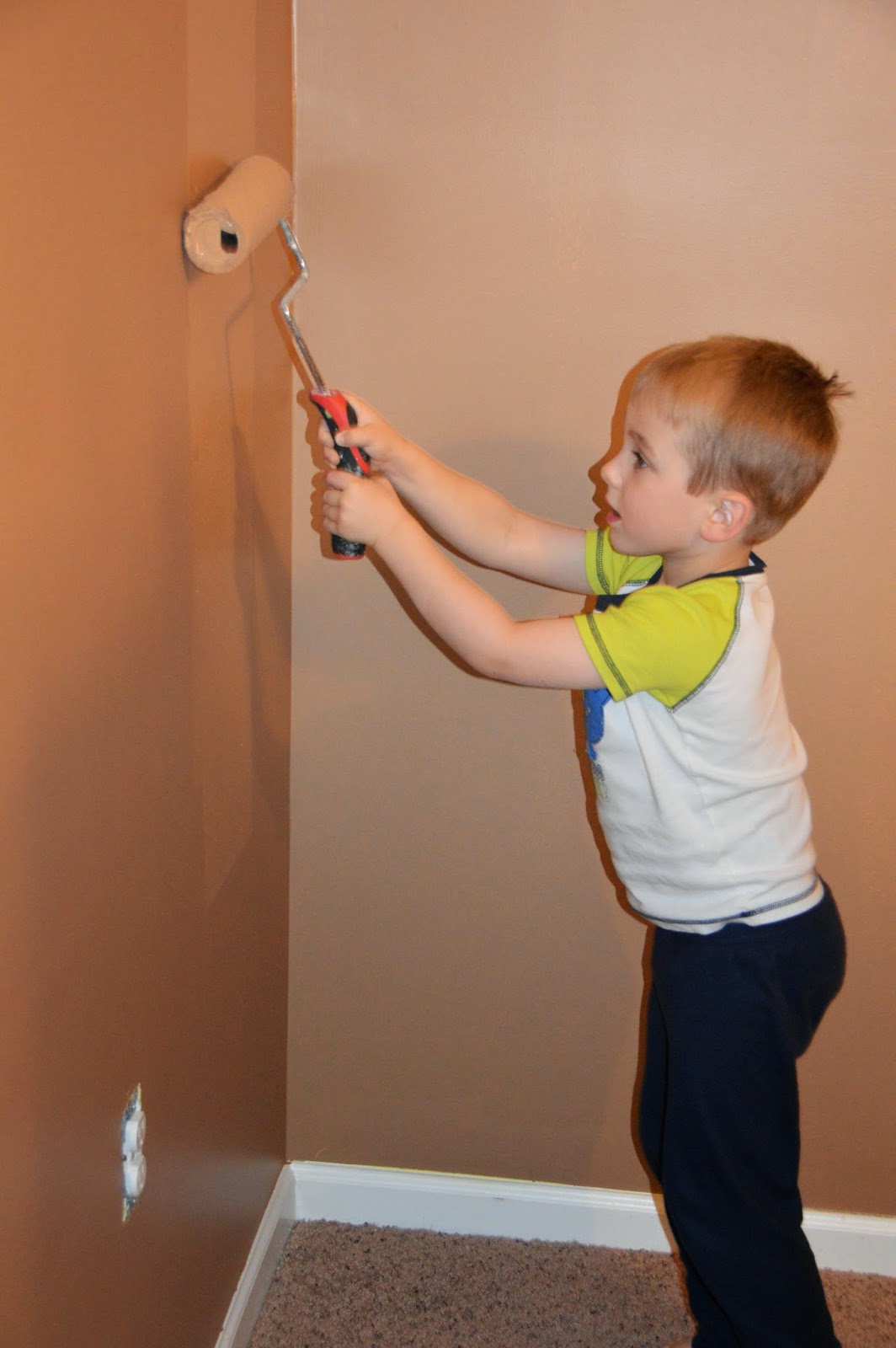 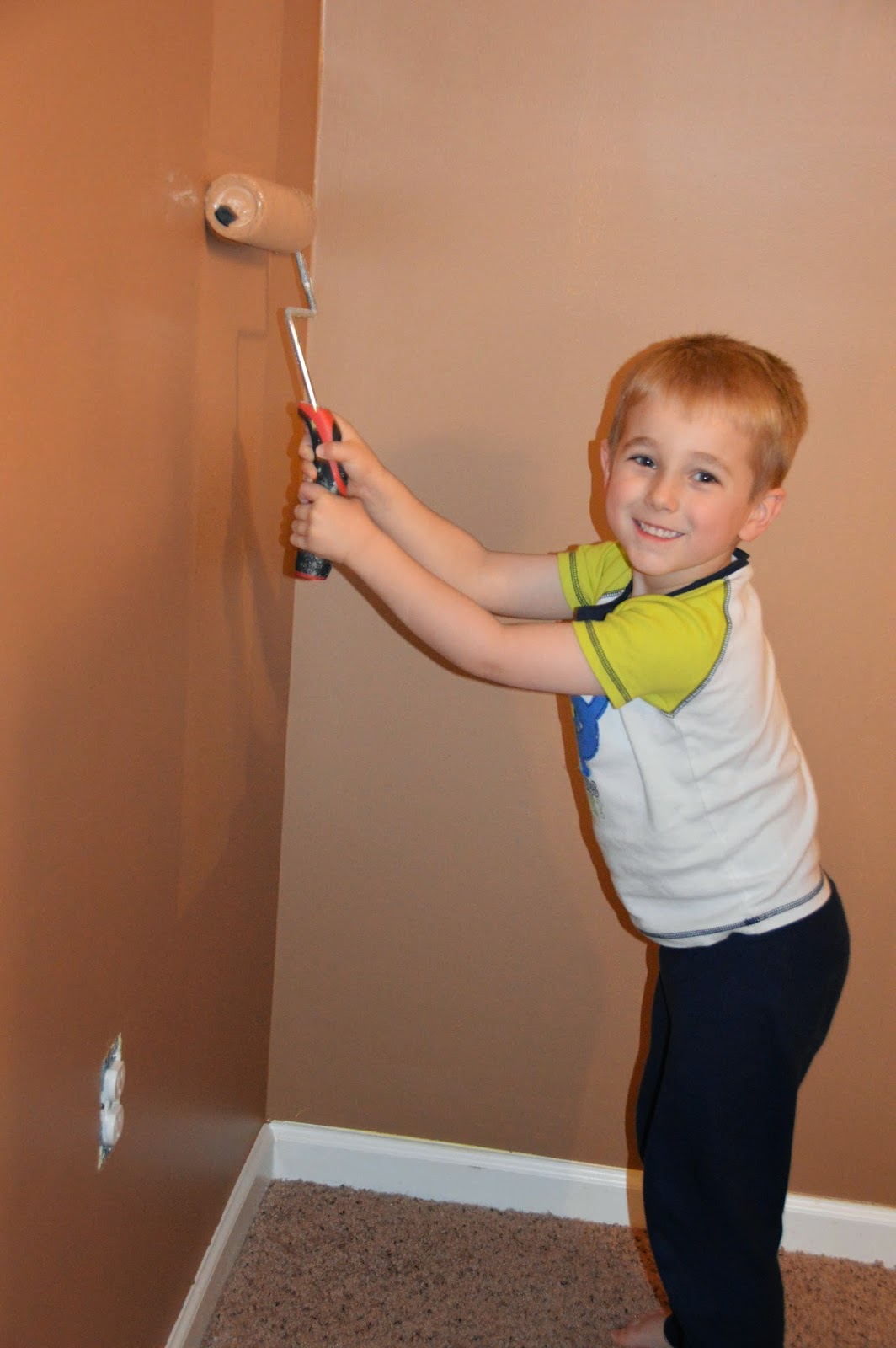 The big excitement for Kye was ALL the organizing he got to do. Child loves some hardcore organization haha. Him and I did a lot of the unpacking and we let the guys handling bringing the stuff upstairs (bending a lot is tough for me while pregnant and I also didn’t like the idea of Kye carrying things up the stairs!). Kye loved that he got to have a say in where all of his things went and he had such a fun time making the room his own!

We originally planned to make a window seat in the dormer window of his room but had this basket that we bought for the playroom and didn’t end up using. It matches his room so well…why not use it? We also painted the dormer area a bright, football field, green and I can’t wait to show off the cool design we have planned for it! The basket has been great for all of his stuffed animals! Out of sight and out of the way 😉 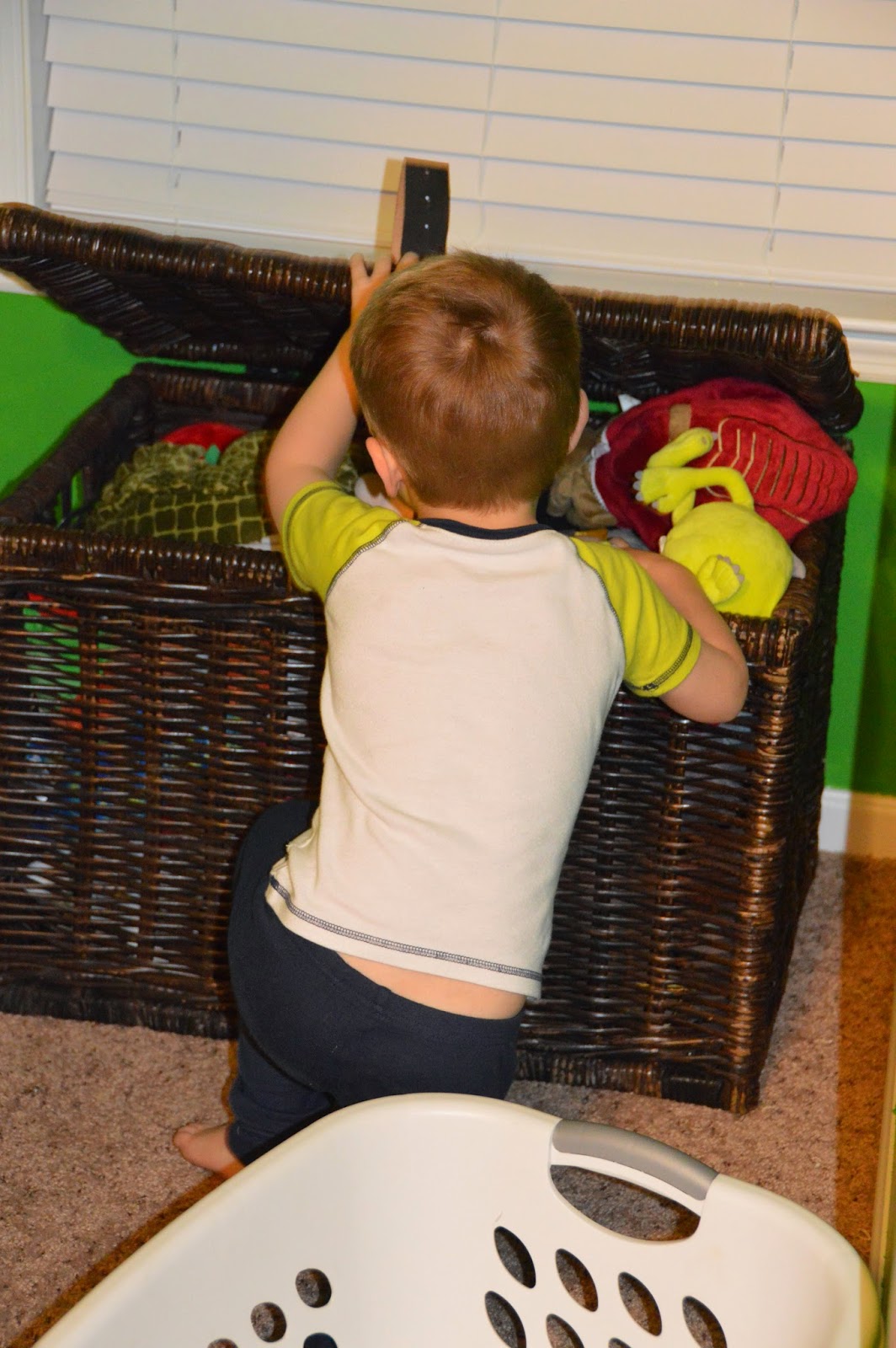 His first time sleeping in his new room was for nap, and it went great! I have him “nap” for two hours still each day. So he goes down at 1 and his lamp comes on at 3. He can then choose to play in his room until the lamp goes off (at 4) and then come down. As he gets older we will obviously make the lamp turn on earlier but as long as my kids are living under my roof…they will be having some quiet time in their rooms in the afternoons so mama can get a break! 🙂

He has done AMAZING with his new room and truly LOVES it. I didn’t realize how much BIGGER the upstairs rooms are and he really does have so much added space! Zach and I both still go up there to tuck him in at night and I go up there to tuck him in at nap, but otherwise we are rarely in his room. He enjoys having his private space to play when he wakes up from nap and he has done a wonderful job with all of his added responsibilities. I am working on a chore situation for him for each day and haven’t yet decided how I want to do it but I will be including daily tasks (like making his bed, putting his clothes away, etc) as well as one task each day (like clean his toilet, dust, vacuum, etc). I think he will do well with it and it will make my cleaning responsibilities SO MUCH easier than having to lug the supplies up and down the stairs 🙂

It’s still hard for me to believe he’s SO GROWN! I am thankful we still have a video monitor in his room as I feel safer knowing I can see him. He doesn’t get out of the bed or anything, but it’s just comforting for me. I’m not sure at what age I will be okay with him not having one anymore? Maybe never? haha 😉

Our big boy in his big boy room! 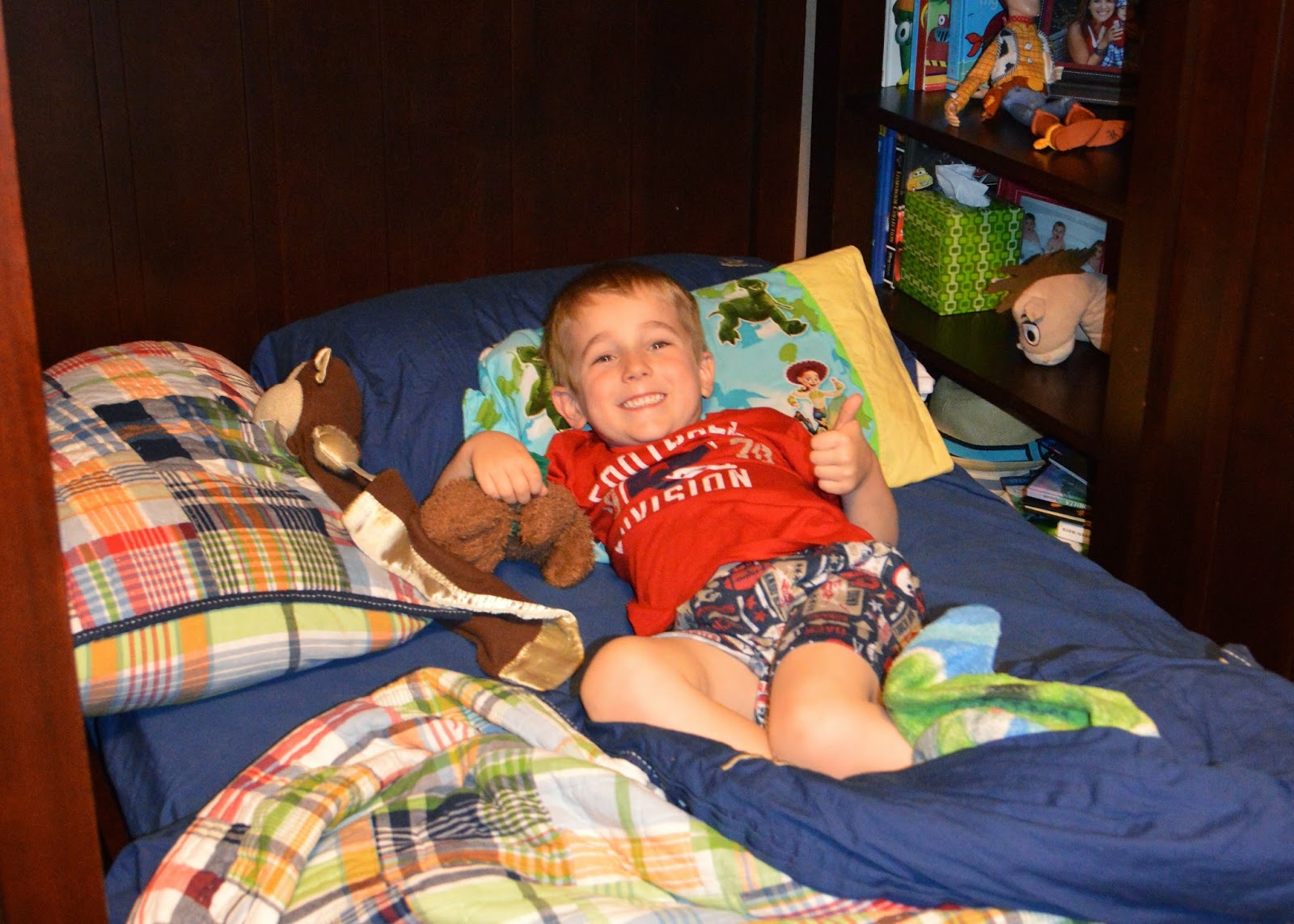