Our plan is for the youngest babies to always be downstairs with us and for the kids to move up as new babies are born. I like the idea that the kids will shift rooms as I can see it being something they look forward to doing AND it gives us an excuse to redecorate their spaces to fit their changing personalities!

I knew prior to moving in that I wanted to have Kye’s room as a golf theme. It’s a sport Zach and I both agree on and one that Kye truly does enjoy 🙂 We had his room be the one with the smaller window as it gives more wall space. My original plan was to always keep Britt’s room as the nursery. When baby #3 comes along I assumed Kye would move up to the playroom, Britt would take his room and the baby would have her room. We are now thinking (depending on what furniture we buy for Britt when she gets out of the crib) that we may just move Kye up and make his room the next nursery then move Britt up when baby #4 arrives and turn her room into a nursery then. We’ll see 🙂 There’s plenty of time to figure it all out!

We bought Kye’s furniture from Pottery Barn Kids. Yes, it was expensive. But our plan is to buy one nice, expensive set for each child when they outgrow their crib then have them keep that set until they move out on their own. So we wanted to invest in something top quality. And boy is it ever!!! I will be a VERY loyal Pottery Barn customer. I have been SO impressed with his furniture. They were wonderful with the entire buying experience as well as the assembly. I also got their credit card and you earn point rewards type things when you make purchases with it so I just used it to buy his furniture (and paid it right off as we had the money saved already) and just with that purchase alone I earned enough “Pottery Barn bucks” to buy all of his bedding for free!!! Score!!!

Originally we weren’t going to buy this dresser but I’m so thankful we did! We needed the storage space! The fabric drawers were tough to find as it’s an irregular height but I like how it turned out. We also stole the lettering idea from Melissa as she did something similar for her wedding. Zach actually got legit field turf from the VSU football practice field to use to cover the letters!!! Didn’t he do a great job with it???? 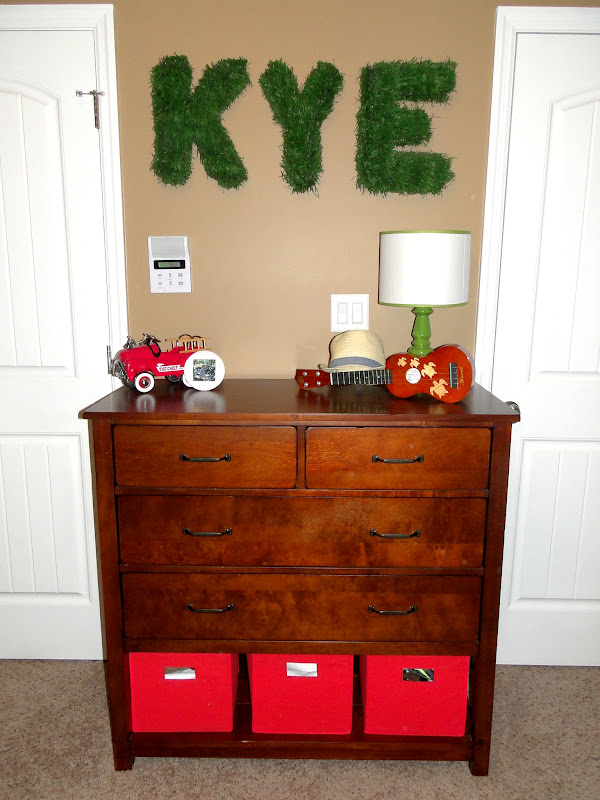 The lamp is from Target. The guitar was a gift from Big Papa and G-Mama when we all went to Hawaii and the firetruck was a gift when Kye was born from my brother, Ryan, and his family. It had a cute little plant in it…such an adorable idea! 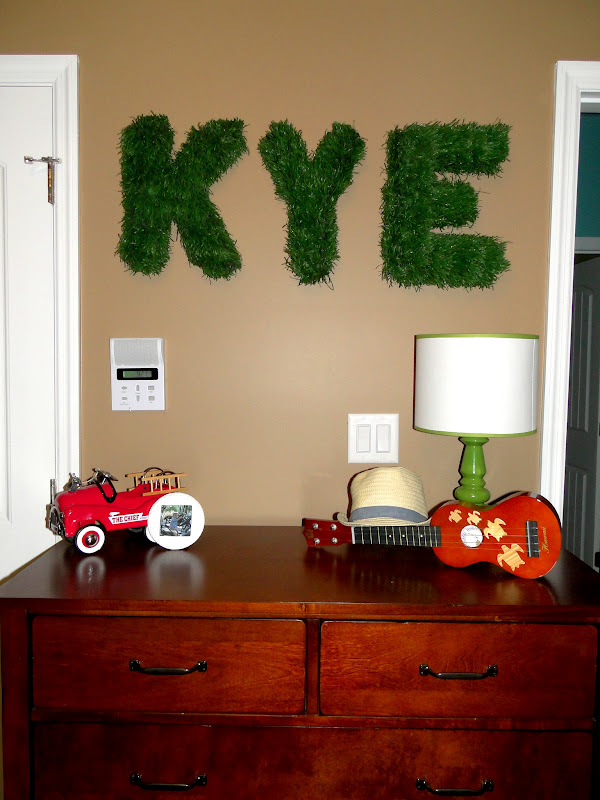 I love having an organized closet. I know it may look crowded, but it is organized! We used all the same stuff in his nursery at our old house but I did buy some new fabric drawers to match this decor. The monkey is just to remember how much Kye used to love them (his current favorite animal is a horse). 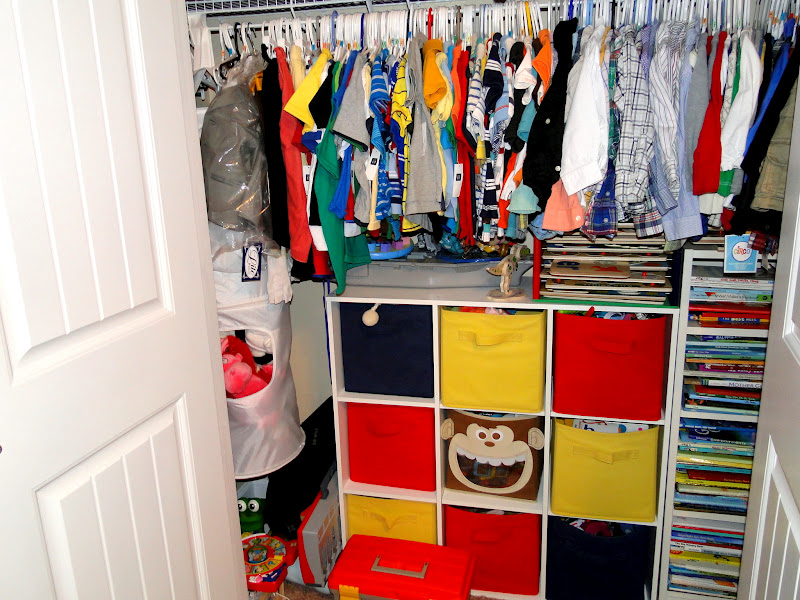 I do wish he had more hanging space in his closet, it’s crammed full! 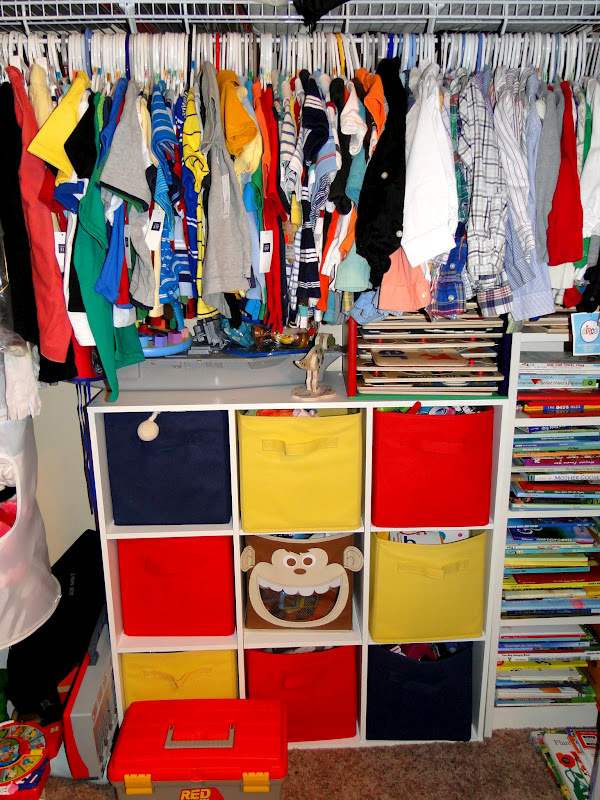 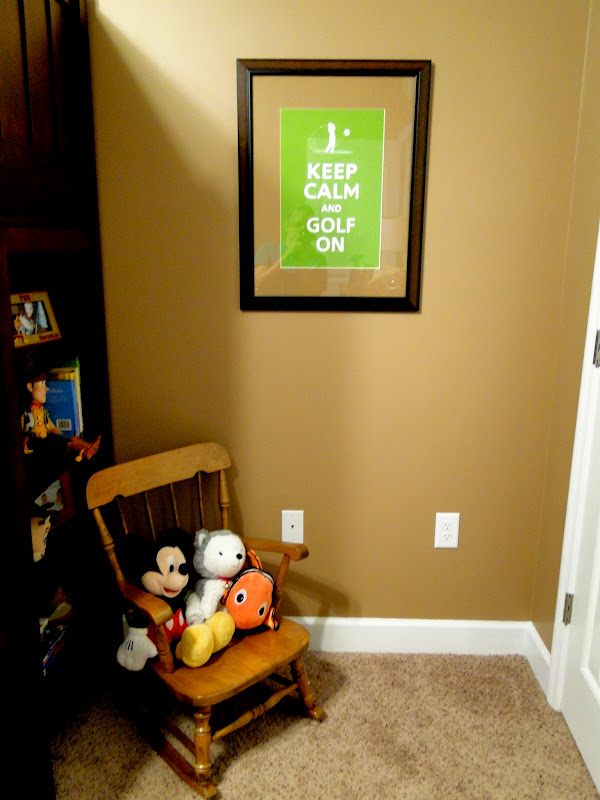 The rocking chair was a gift from Nana. 🙂 It used to be in her house. I love that my children will all use it! Kye likes to keep his Mickey, Nemo and Jingle in it 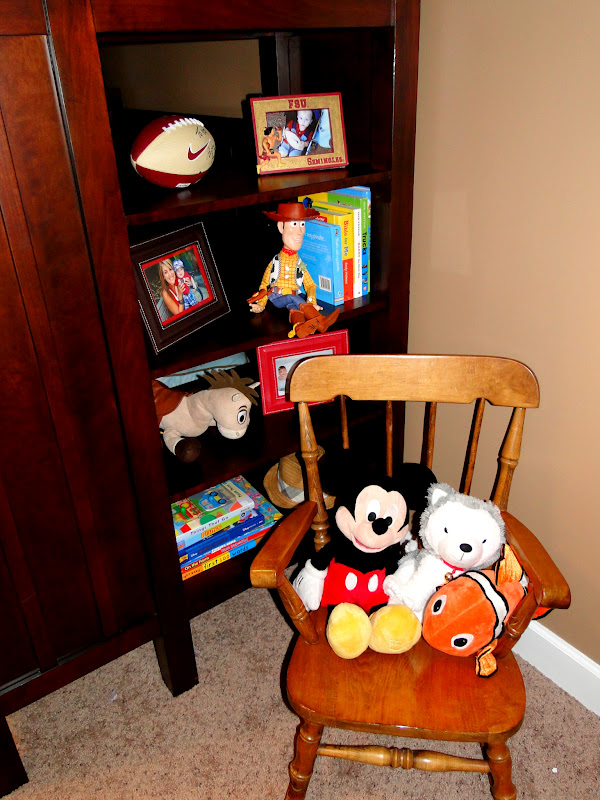 I like that there are shelves with his bed set, but he is at an age where he’ll mess with the stuff on them. Which is fine as none of it is breakable. And he’s learned that he can’t play with any of it during his nap unless he wakes up earlier than when it’s actually time to get up (although he never plays with any of it then either). The top shelf is the football Bobby Bowden signed for him along with a picture from his first FSU game (hoping to take him to another one this coming season!) Then I put a picture of us together along with some of his thicker books that don’t easily fit in the closet storage space. Woody and Bullseye both sit out along with a random hat of his that he wears quite often when playing his guitar 😉 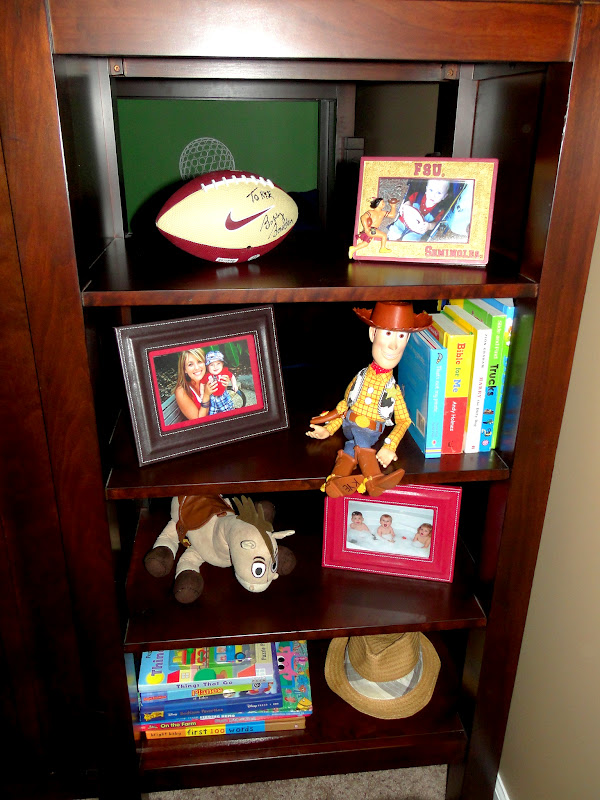 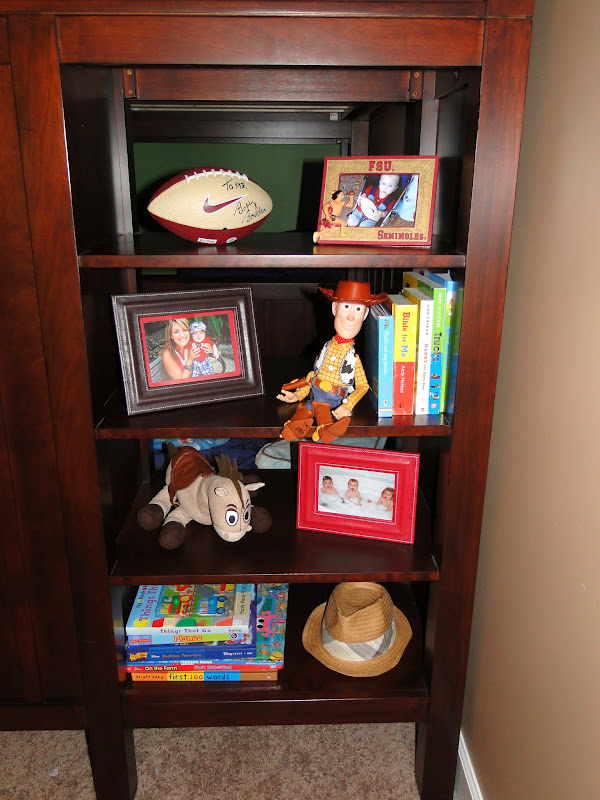 I REALLY wanted Kye to have bunk beds. We currently keep the ladder upstairs in the attic but I know as he grows up and has sleep overs that the top bunk will get a LOT of use. It’s also great because the bottom bed can be removed so I can also see him as a teenager wanted to sleep on the top bunk and using the bottom area as a place to hang out or something. The drawers are awesome and I keep his underwear in the bottom one where he can easily access it to pick them out each night. We also keep his shoes in the other drawers. There is a desk on the left hand side of this picture but we pushed it  up against the wall for now as he doesn’t need a desk space nor will he need a desk space while this is his bedroom. 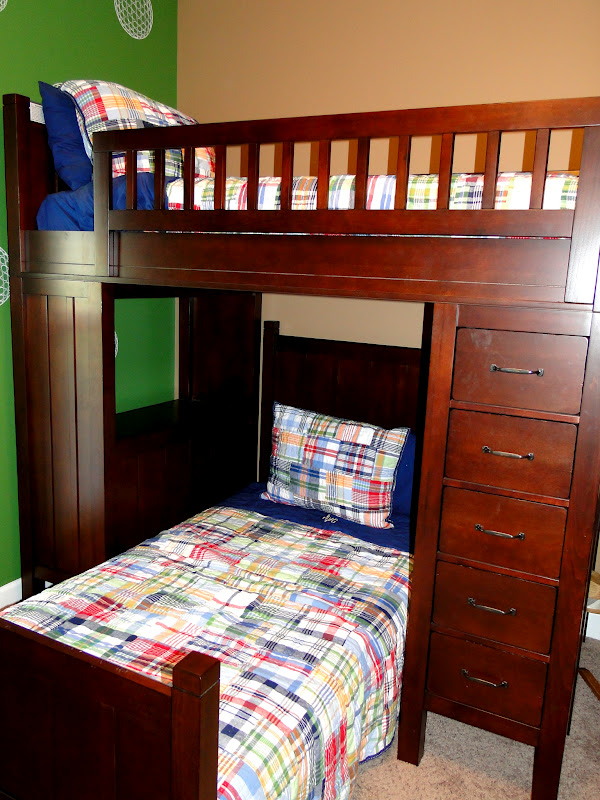 Like I mentioned before the bedding is also from Pottery Barn. The sheets are from The Company Store and have his name on them. I thought it was a cute touch 🙂 I LOVE that the bedding is SO boyish and universal! When he changes rooms the bedding can be easily adapted for any theme (as of right now I’m thinking cars…not the movie…just vehicles in general but we’ll see what he’s into at that point!). 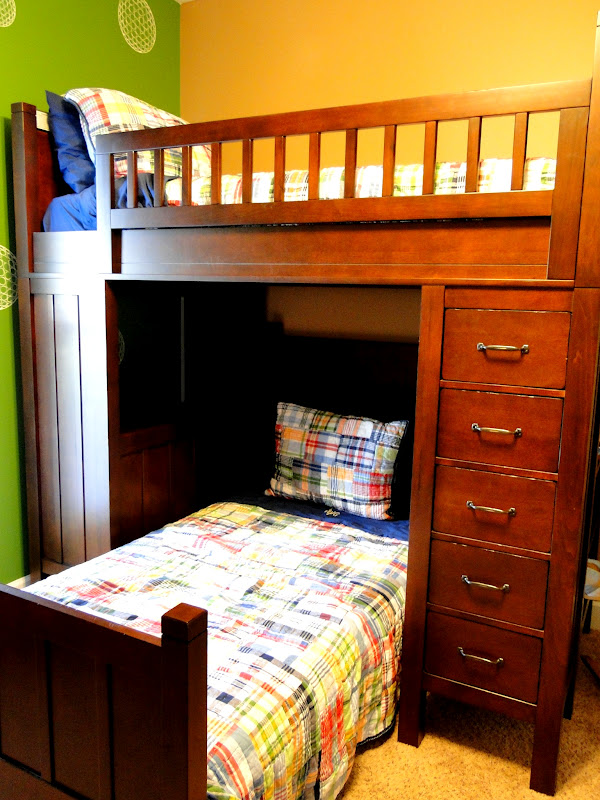 We wanted to have an accent wall in his room and I LOVE how it turned out!!! I had these golf ball decals specially made as I wanted something modern and not “classic” golf looking. Decorating his room was the HARDEST out of any room as golf stuff is just tough to find!!! I bought the black out curtain from Target and the chair is from Ikea ($99! And we had it in his old room as well!). 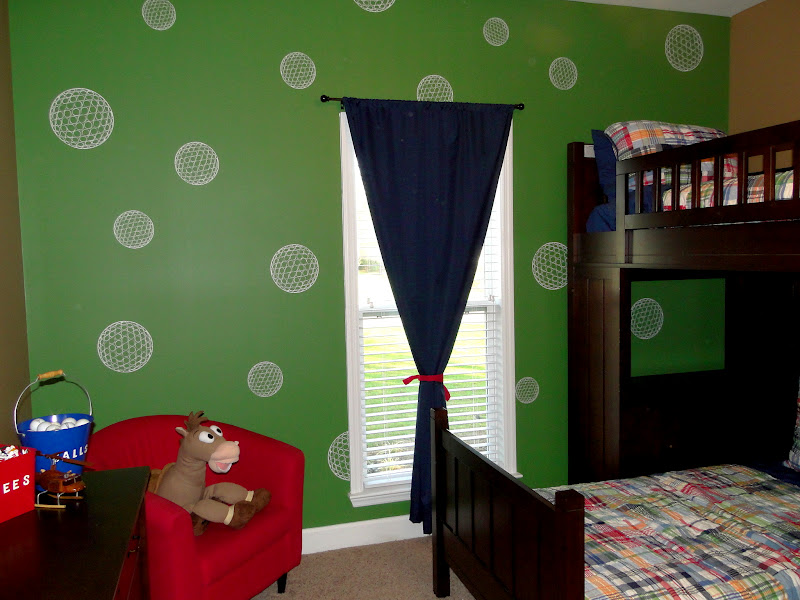 I really hope we can have a chair in each of our kid’s bedrooms. I like having a space to sit and read stories. We don’t read them in the bed as the bed is for sleeping and I read somewhere that you can easily get sucked in to “just one more” when you read in the bed?!? I hope this red chair will just continue to match any theme we come up with for Kye as I love that it’s “his chair.” This long dresser finishes out the furniture and, again, I couldn’t be happier with it! 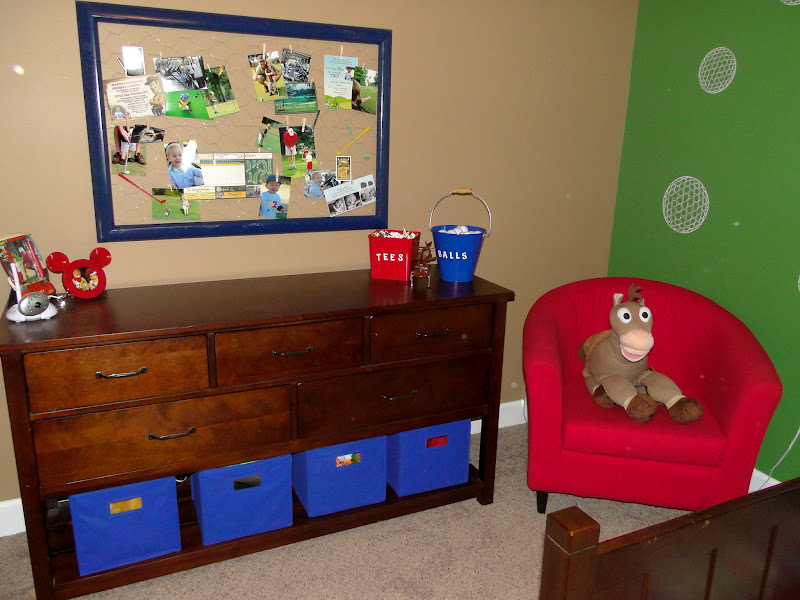 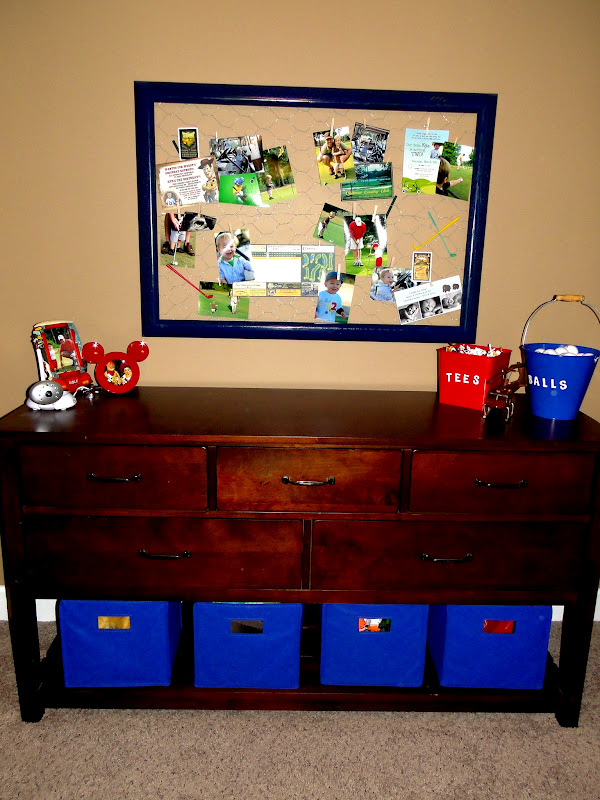 I found these pails and glued on the lettering then filled them with golf tees and balls (it’s not actually completely full…I stuffed the bottom with grocery bags then covered that with basket filler and topped that with the tees and balls!). The helicopter is also from our Hawaii trip. It’s now broken and will be in the trash can as soon as I remember to toss it! 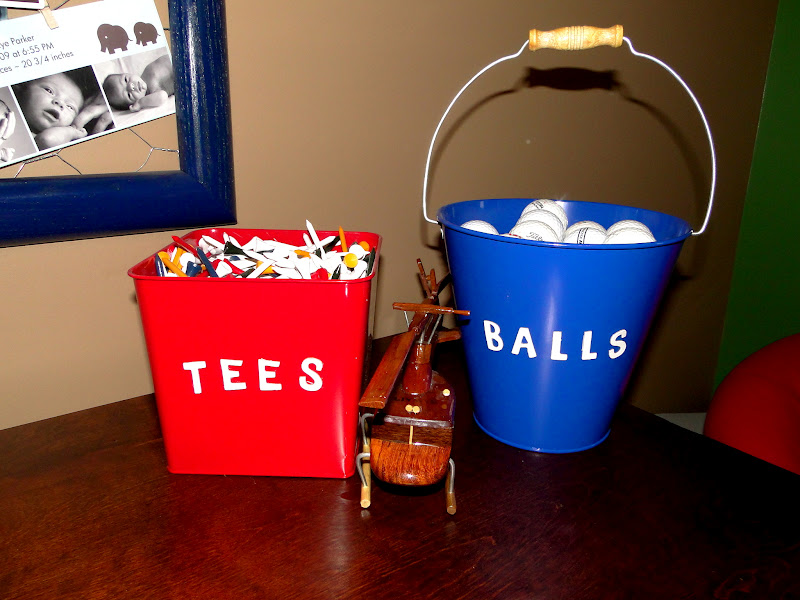 I stole this idea from The Macs (and I think Rachael made it too!). I bought an empty frame from Hobby Lobby ($17!) and Zach spray painted it navy blue then we bought chicken wire from Lowe’s and he stapled it to the back. SUPER easy and very inexpensive! I love how it turned out! I printed off lots of pictures from our many golf outings over the years and put them on the board along with his birthday party invitations, birth announcement, ultrasound picture, and a few other golf themed items I found (a score card Zach got for me, some mini clubs I bid on from Ebay as I guess they are vintage, and two vintage golf playing cards I got from Etsy then glued onto mini pins). I think it turned out perfect and was exactly what I had envisioned! 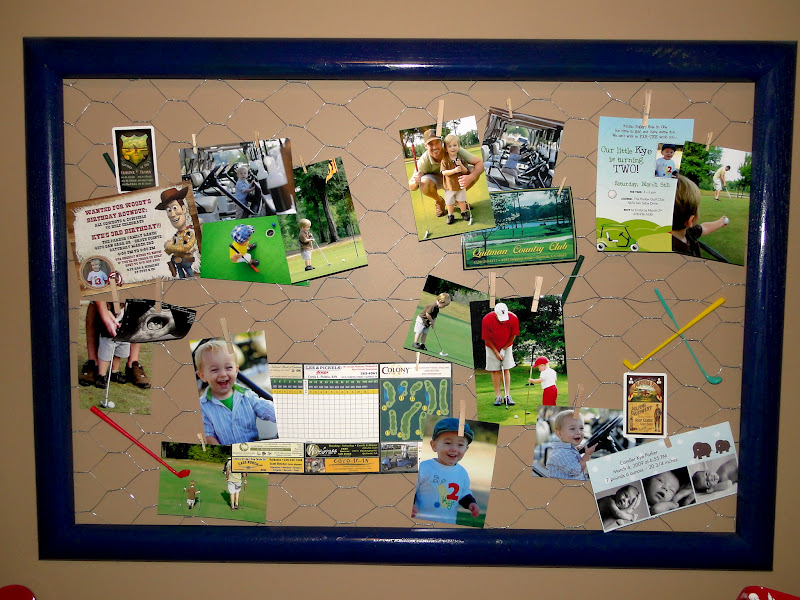 Kye LOVES his room. Like LOVES it. Anytime company comes over (even if they’ve been here 1,000 times) Kye immediately shows them his room. It makes me SO happy that he loves it so much!!! I have told him that the playroom will be his room someday as I don’t want that to be a tough transition for him (and it’s like YEARS away…but I like to prepare him!). His room may have taken the most thought and work, but I couldn’t be happier with the outcome!