At the end of August we found out some bad news. For the first time since Zach ever started working with Aflac, he didn’t qualify for National Convention. Technically he did qualify but a little bad luck mixed with some other stuff meant we couldn’t go. And it was in NYC. And Jordan and Casey qualified. And Zach’s parents got to go. And a lot of other junk that just made it rough news. We were both SUPER bummed out about it.

Around the same time we found out that NYC was a no-go, Kye was also having a tough time. He was very emotional about missing my mom. It’s very difficult for me when he gets sad about not seeing her anymore. I cry right along with him! I hurt for him and just want to take all his pain away.

Since both of my favorite guys were having a rough time, I tried to think of a way to cheer them up. DUH…FOOD! Every smart girl knows that the way to a man’s heart is through his stomach, right? 🙂 I decided to go all out and make a FEAST for our dinner that night and make it as special as I could! Britt and I spent all that morning preparing everything and she was SUCH a great helper in the kitchen! She took her mixing responsibilities very seriously. 🙂 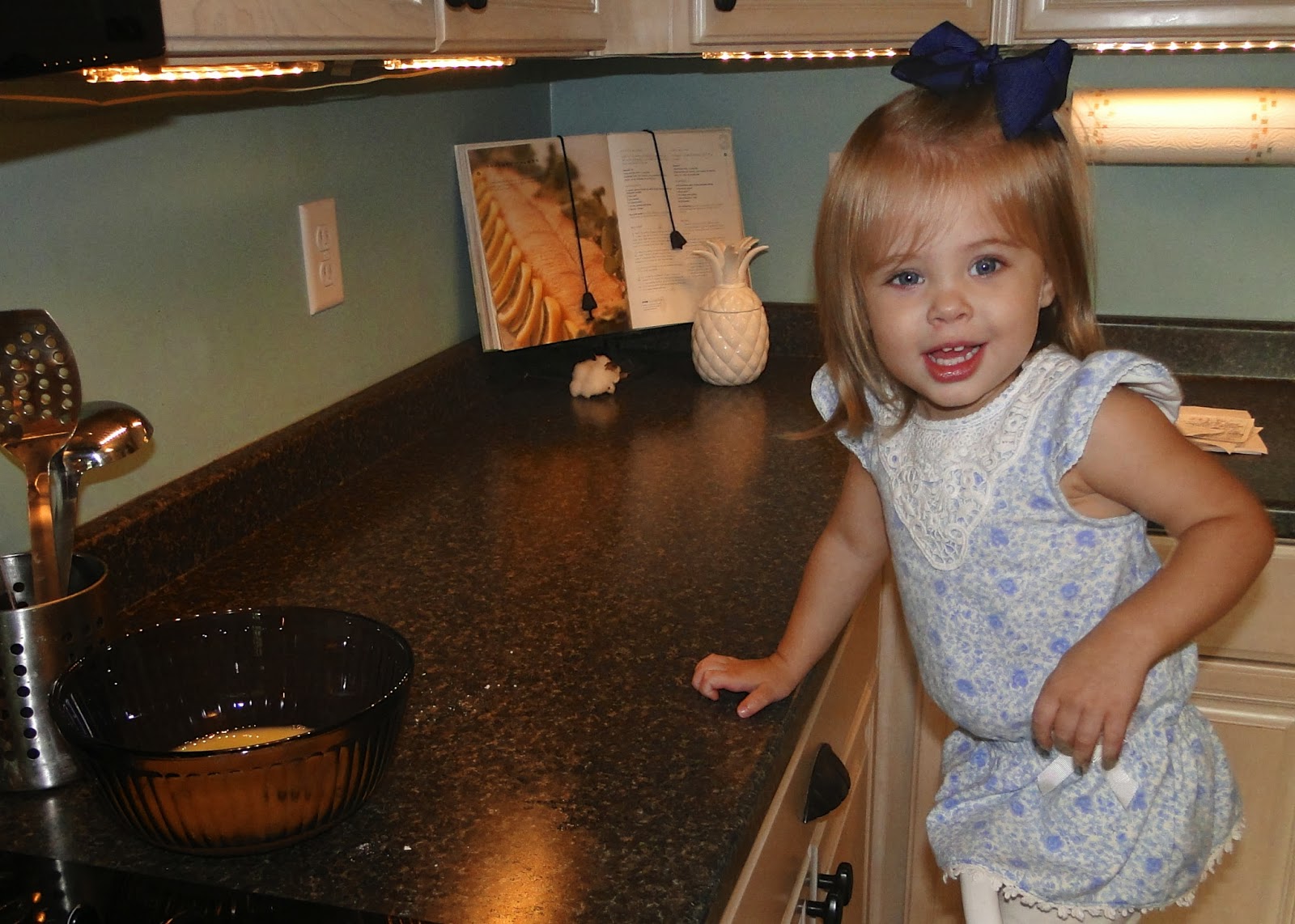 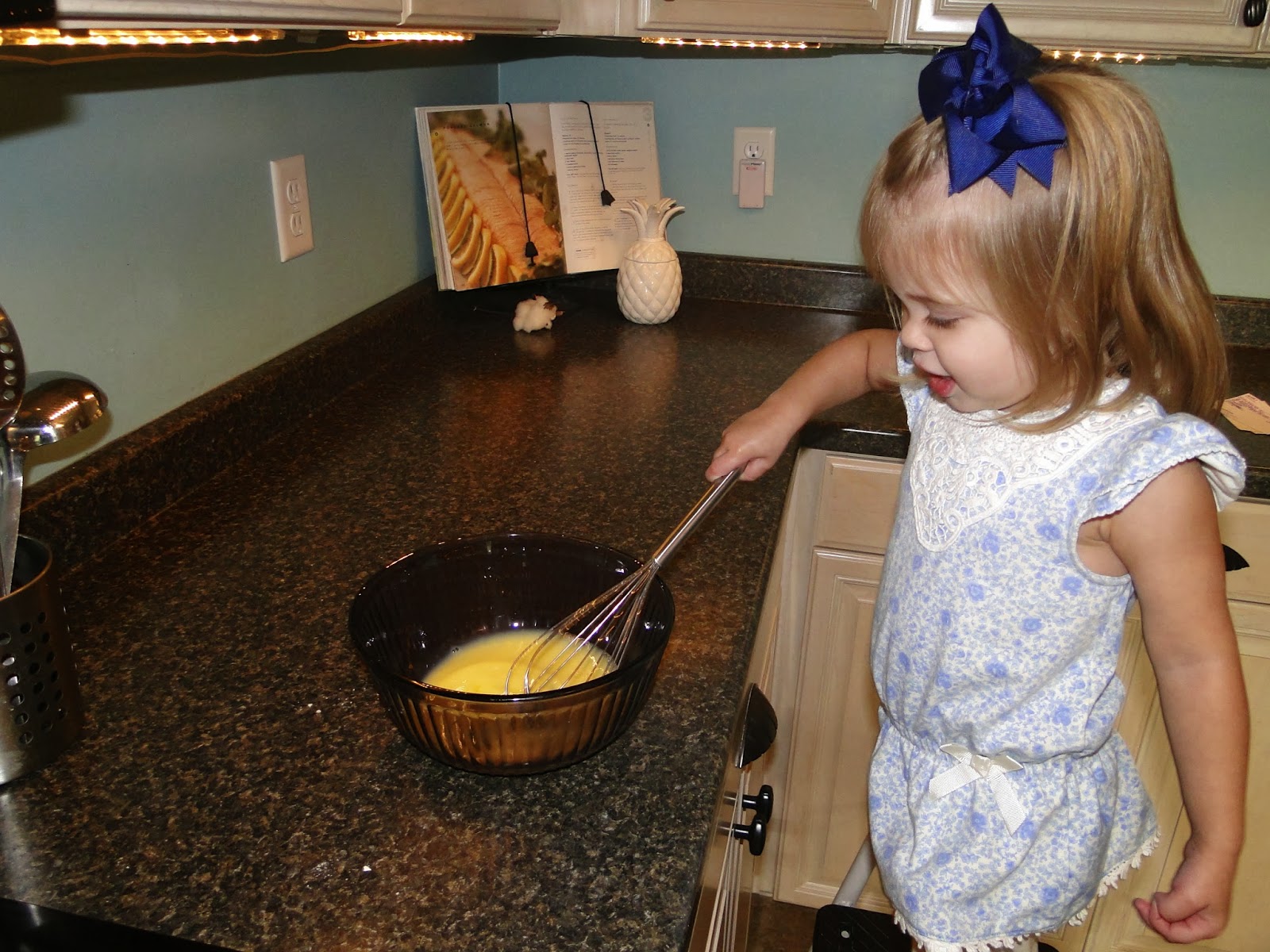 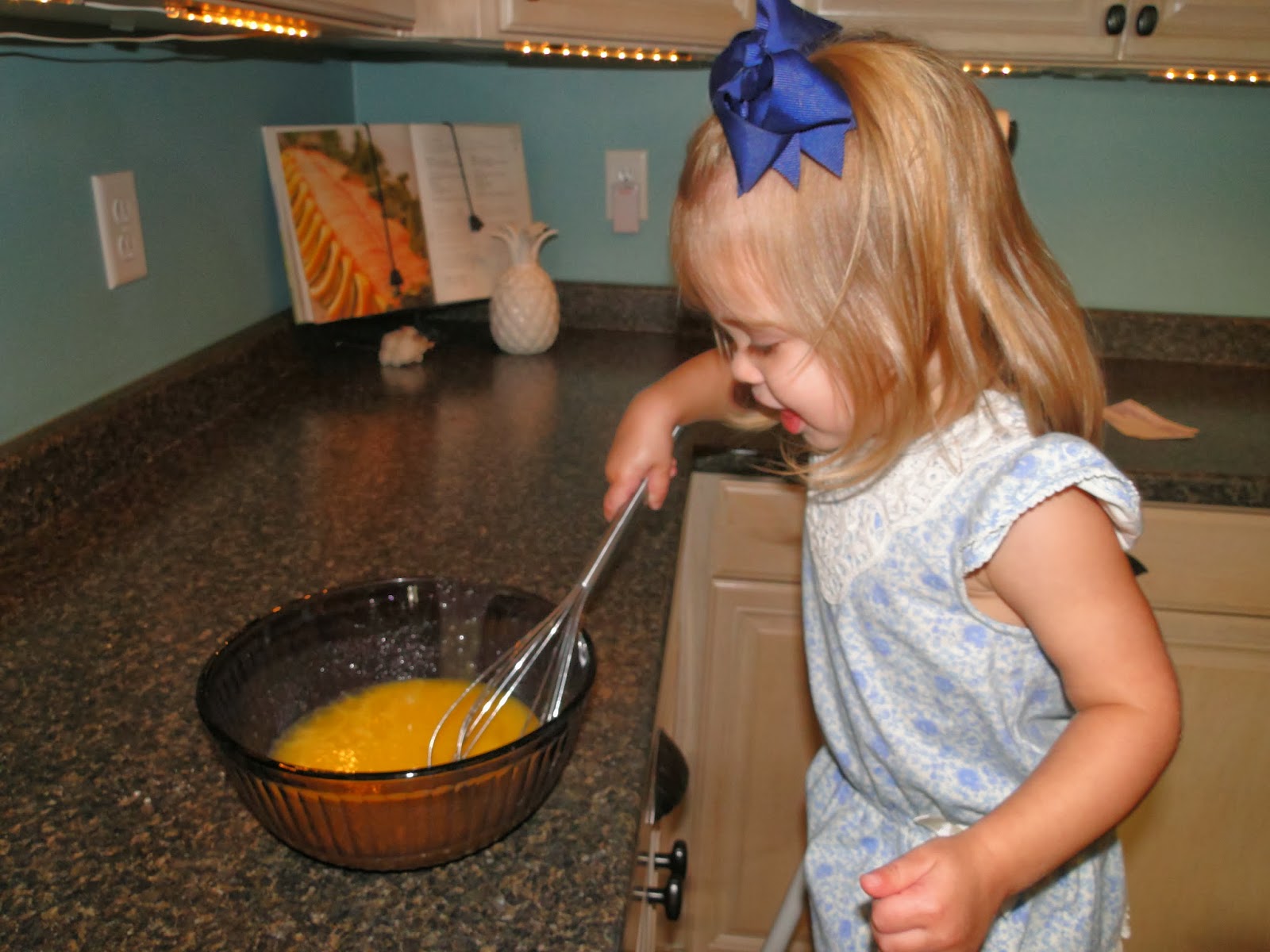 “Who likes to help Mommy cook?” 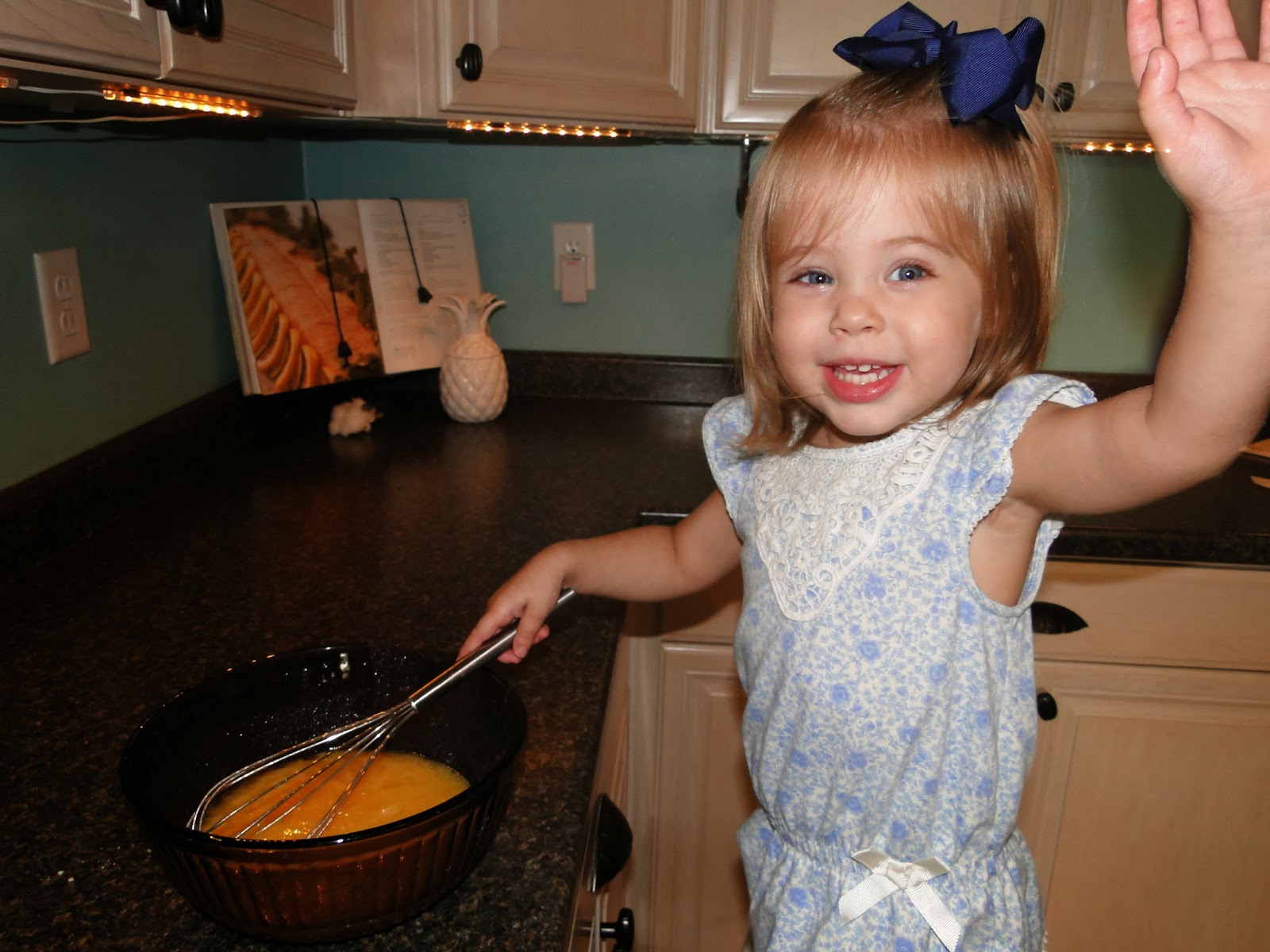 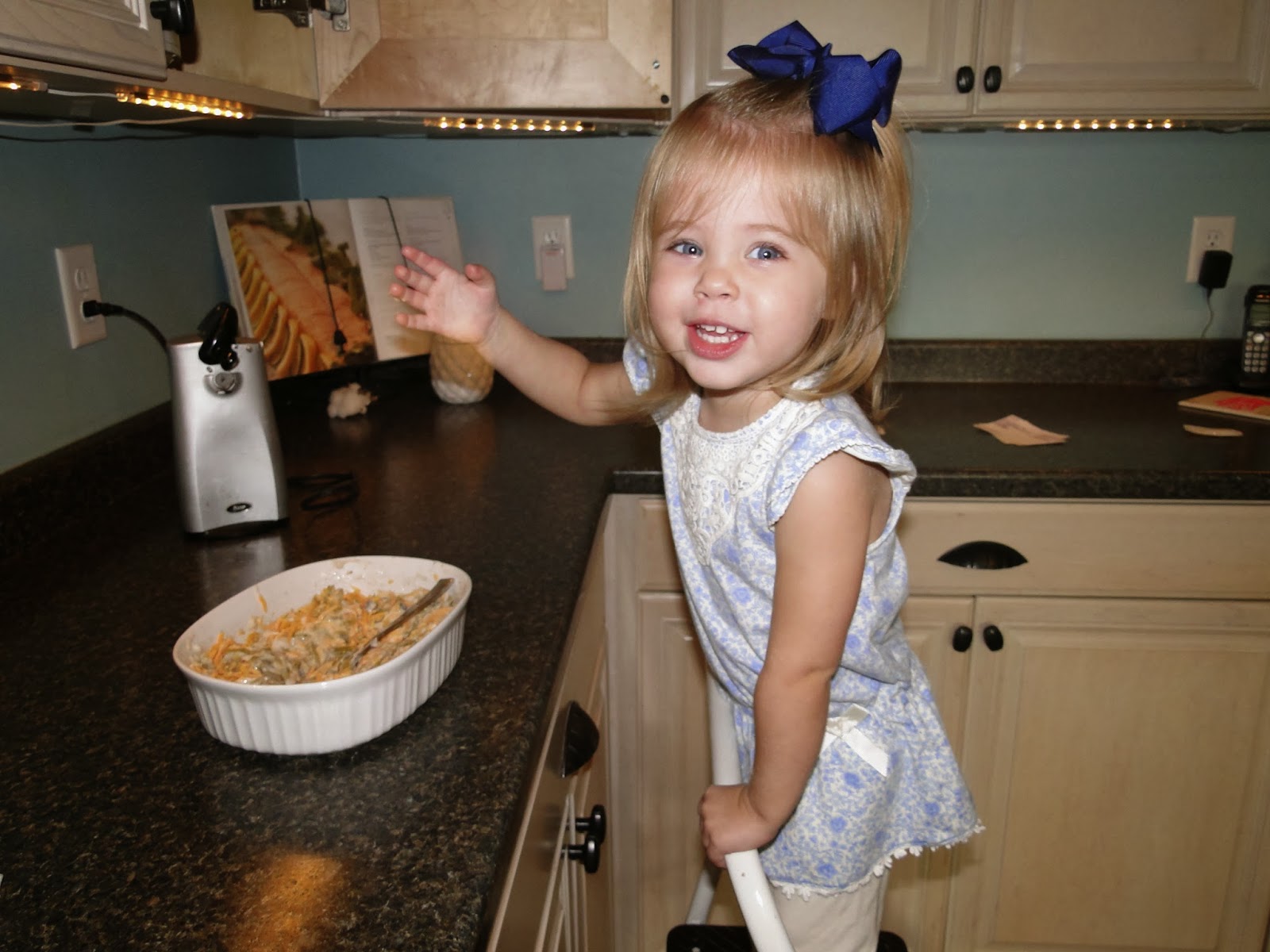 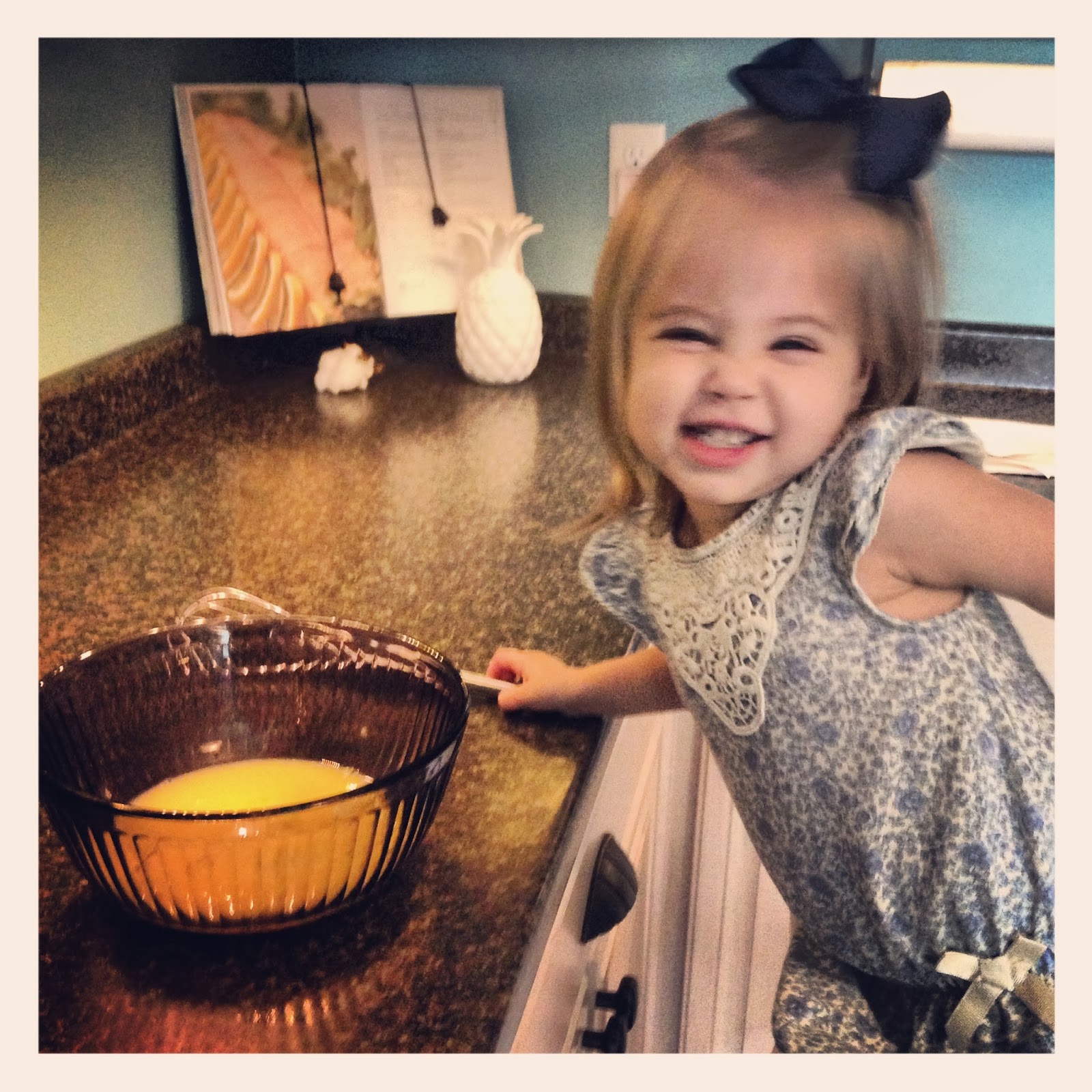 I set everything up in the dining room for us to eat. Kye LOVES eating in the dining room. We rarely eat in there and it makes everything more special 🙂 I tried to cook something that everyone enjoyed! I made green bean casserole for Zach, chicken manicotti also for Zach, corn on the cob for Britt, bread and frozen berries for Kye, and I even made sweet tea for Zach since my sweet tea is the JAM! I even let Kye drink out of his very first LEGIT drinking glass (actually, the “glass” he used was a candle holder favor given out at my  Junior or Senior Prom!). The boys were very surprised and so excited! Britt and I were proud of our hard work and we all enjoyed a wonderful family meal together! 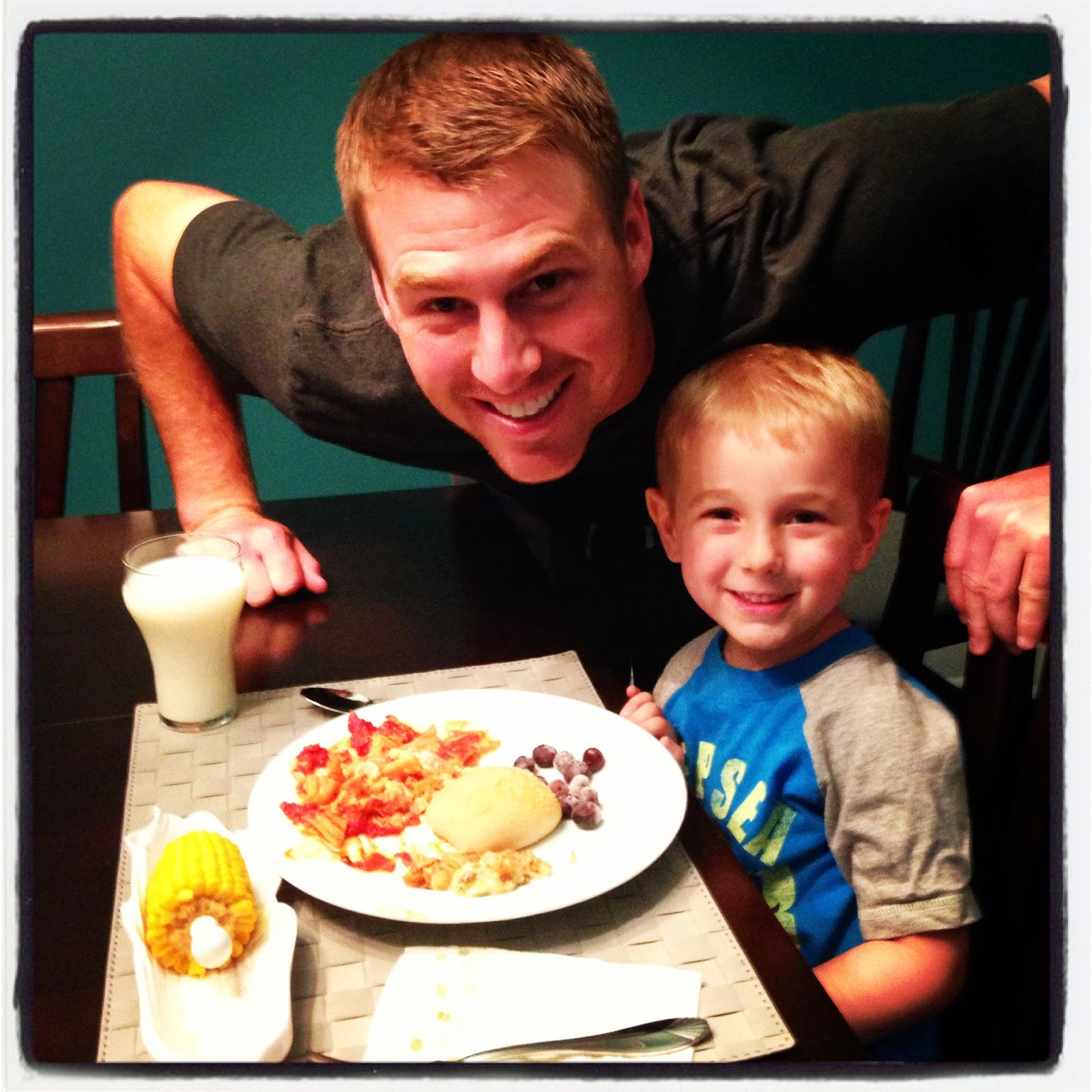 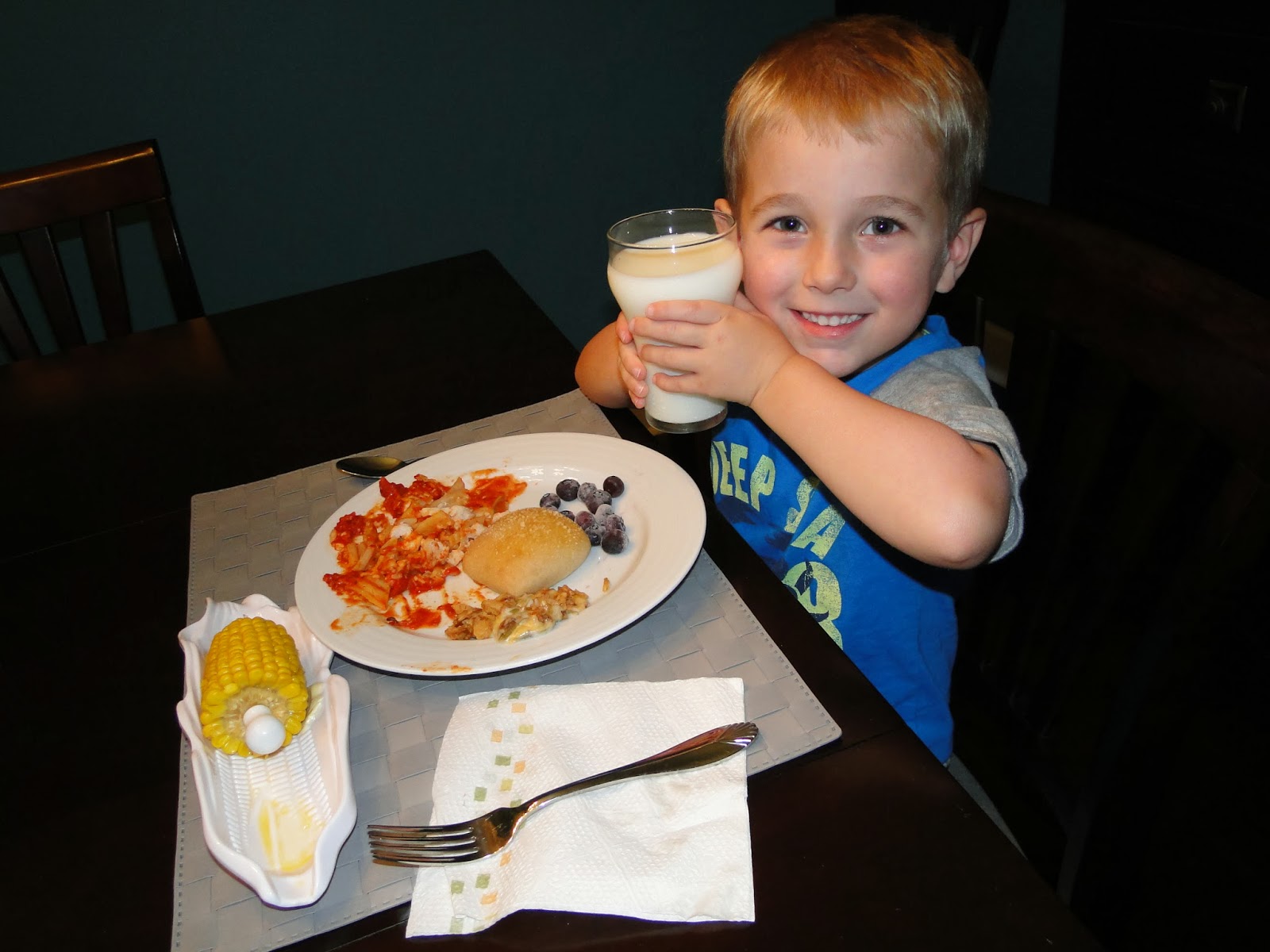 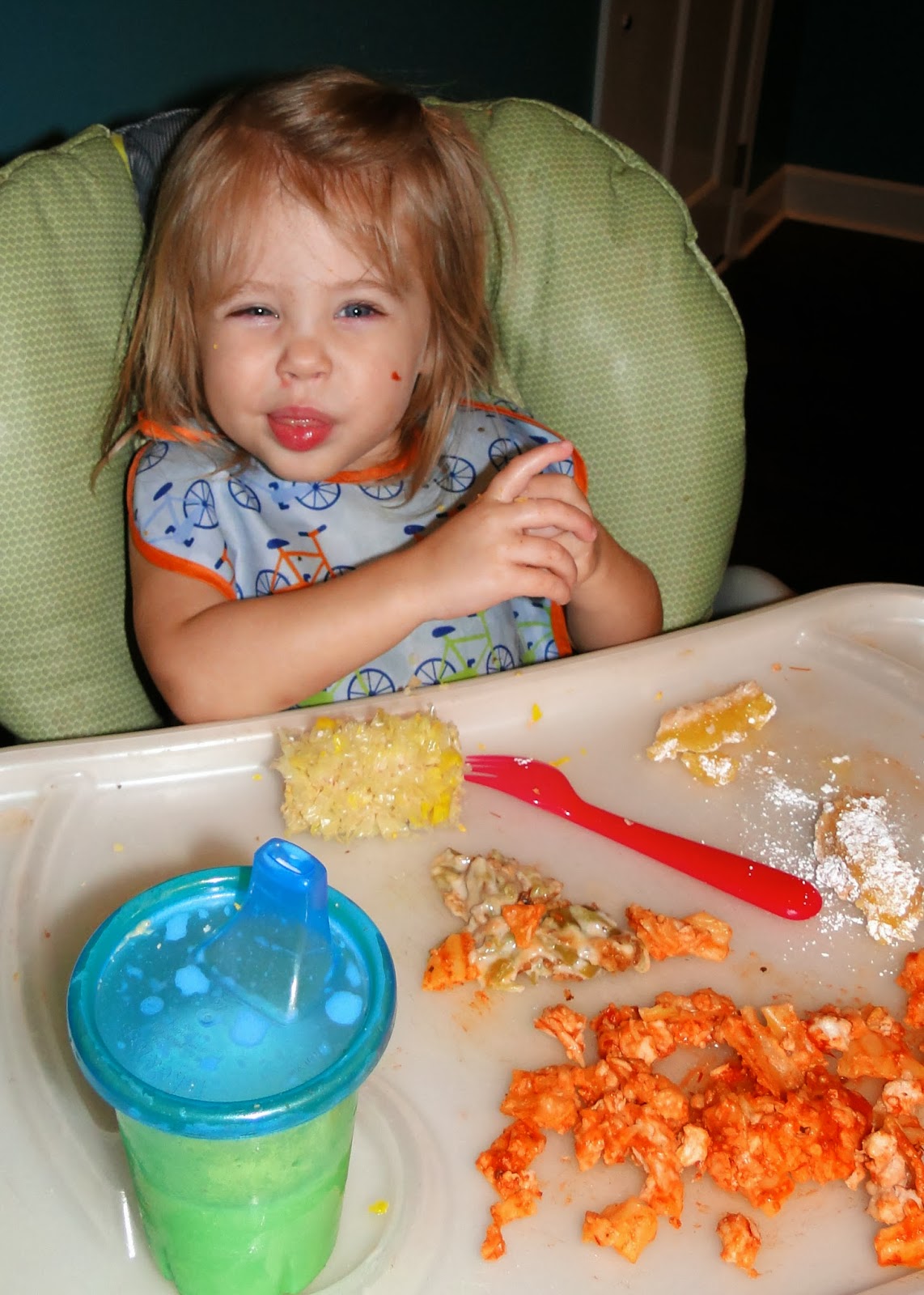 As an added treat Britt and I even made dessert! I had a box for lemon squares in the pantry that was like three years old so I figured it was time to make it! I thought everyone would enjoy the lemon squares but it turned out that I pretty much made them for myself as no one else liked them haha! I guess it was a reward for all my efforts. 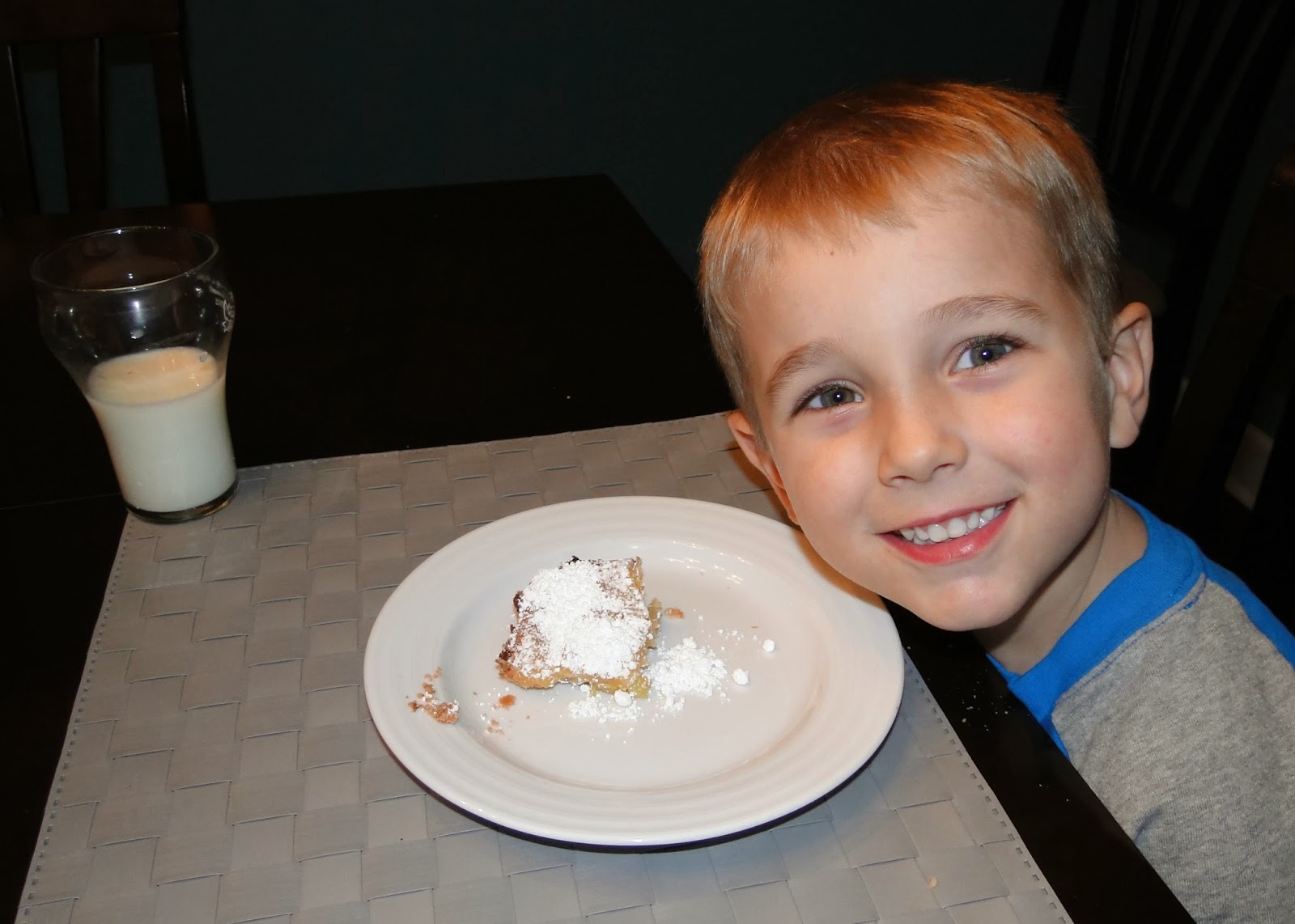 I love that I was able to do something special for my sweet son and amazing husband without spending a single penny 🙂 They both appreciated everything and we all enjoyed the tasty meal! I hope it helped to lift their spirits a little bit during their tough weeks!