I’m officially nine weeks pregnant today! I didn’t realize it but we actually waited longer to announce this pregnancy than we have the other two! Lots to catch up on for sure 🙂

As I mentioned last post, I was assuming I was pregnant prior to testing b/c I had a good bit of implantation bleeding. The scary thing was…it didn’t stop. Even though I had a darker test on Wednesday Nov 20th I was still spotting (so it was going on 5 days at that point). It was dark in color (mostly brownish) and only showed up when I wiped. I hate to be “that girl” who freaks out and calls the dr office for everything, but I had to. I was a nervous wreck!

When I called they asked a LOT of questions about the color, thickness, any pain etc. They told me it was all probably fine and normal but that I could come in and get my levels checked if I wanted to. I’ve never had my levels checked before…Zach was out of town so I’d have to take both kids with me…and I hate needles. I was going back and forth trying to decide what to do and then Stacy told me she’d call me later that day so I decided to wait for her call.

By the time Stacy could call they were closed so I ended up not going in! It was SO comforting to talk to her though and she told me that she couldn’t believe I tested as early as I did and that I actually got a positive test 😉 She said I could come get the levels checked the next day if I wanted to, but that it would take two times of checking them to be able to know anything (gotta compare the numbers) and that if the worse case scenario did happen that I was tooooo early for them to help me keep the baby anyway. She said the most important thing was to REST, drink lots of water, and eat enough. As long as it stayed light and I didn’t have any pain that it was okay.

She also gave me a little wake up call that I needed by telling me “You ARE pregnant This is really happening! You don’t need to buy more tests!” It was what I needed to hear and having her kinda confirm it made it more legit to me for some reason. Sure enough, the next day (Nov 21st) NO SPOTTING!!! Yay!!! I felt soooo much more peace and was finally able to be excited 🙂

My symptoms were SO different early on from my other two pregnancies. Normally my boobs become SUPER tender right away. But not this time! I actually never fully dried up after weaning Britt . YES that means I still leak milk! Gross huh? But I’m thinking that may be why my boobs are sore? They are already ready to go haha.

Right away I was SO TIRED. Zero energy. Very bloated. But by the start of my 4th week all my symptoms disappeared. I had more energy. I wasn’t tired. Over Thanksgiving I was nervous that maybe I was going to lose the baby b/c the ONLY real symptom I had was that I was already waking in the night to pee.

By the start of December my symptoms were back in full force. This time around? BACK PAIN. Yikes. It’s legit and horrible. I was 5 weeks pregnant and had such bad pain that I had to rest often and use a heating pad all the time on it. The pain would also shoot down my left leg. And I could also feel the uterus expanding already too. I guess b/c I’m more in tune with my body I know what that feels like?

At Britt’s birthday party I was 6 weeks pregnant and it wore me out. My back hurt very, very badly by the end of the party and I had a severe migraine. I ended up having to skip church the next day and just sleep. I slept 17 hours in a 24 hour period. For real!!! I felt WAY better and it was a big reminder to me that I NEED rest!!! It was tough being pregnant with Britt and having Kye as a toddler…but having Britt as a toddler while pregnant? Whew. It’s exhausting! Britt requires WAY more energy from me as she is go-go-go non-stop so I really do have to be mindful to make myself get the rest I need!

We went to NYC when I was 7 weeks pregnant and I was REALLY proud of how well I took care of myself there. We got GREAT sleep every night and we didn’t overdue anything at all. I couldn’t take any meds for my flight anxiety but I really did fine with the flight this time! Maybe b/c it was so much shorter than Italy was? I still got tired easily while there but Zach was very patient with me and we rested a lot. I also drank TONS of water! It’s my #1 goal this pregnancy: stay hydrated. Reading over my past pregnancy notes I truly believe that’s my main struggle and is something I HAVE to do better with this time around!!!

We got back from NYC with the news that Kye was running a fever. I met Mrs. Charlotte at the walk-in clinic that next morning with him and went ahead and sold my Justin Timberlake ticket for that night (SO SAD). He tested negative for strep but with his throat being covered in red and white they went ahead and decided to treat him for it. It was an awful, miserable, week for our family. The day after Kye got sick, I got sick. I called up to the dr and told them I had the same thing he did and they called me in an antibiotic that was safe for pregnancy (penicillin). I’ve been sick while pregnant before but yall this was on a whole new level. I’m actually writing this 10 days after I first got sick and I am STILL not 100% better. So over it!!!

We had a week of pretty much movie watching and resting but by Saturday we HAD to get some pre-Christmas stuff done! I thought it was a good chance to take my first weekly pregnancy picture since I was actually semi-dressed (even though I still look SO SICK!) 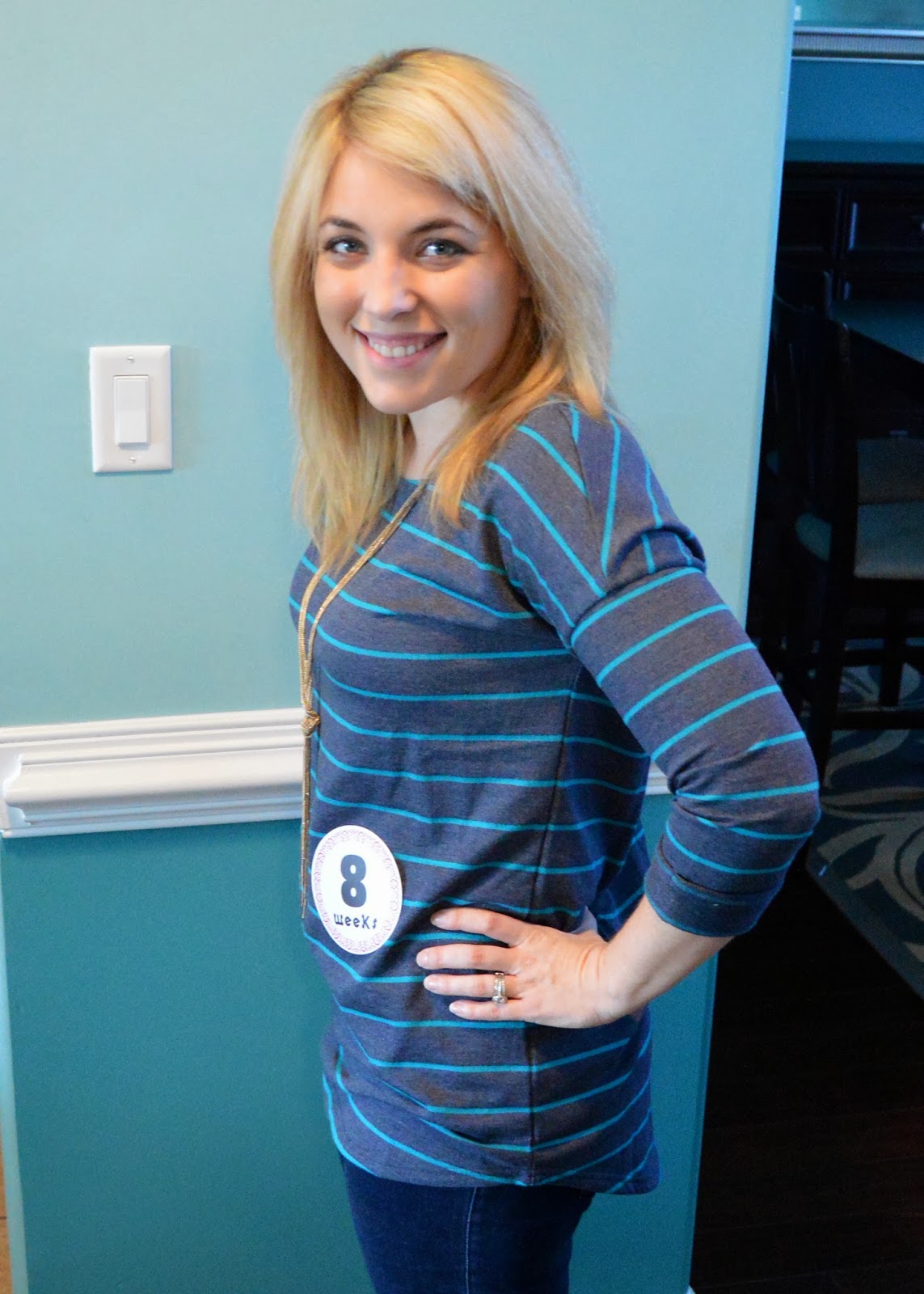 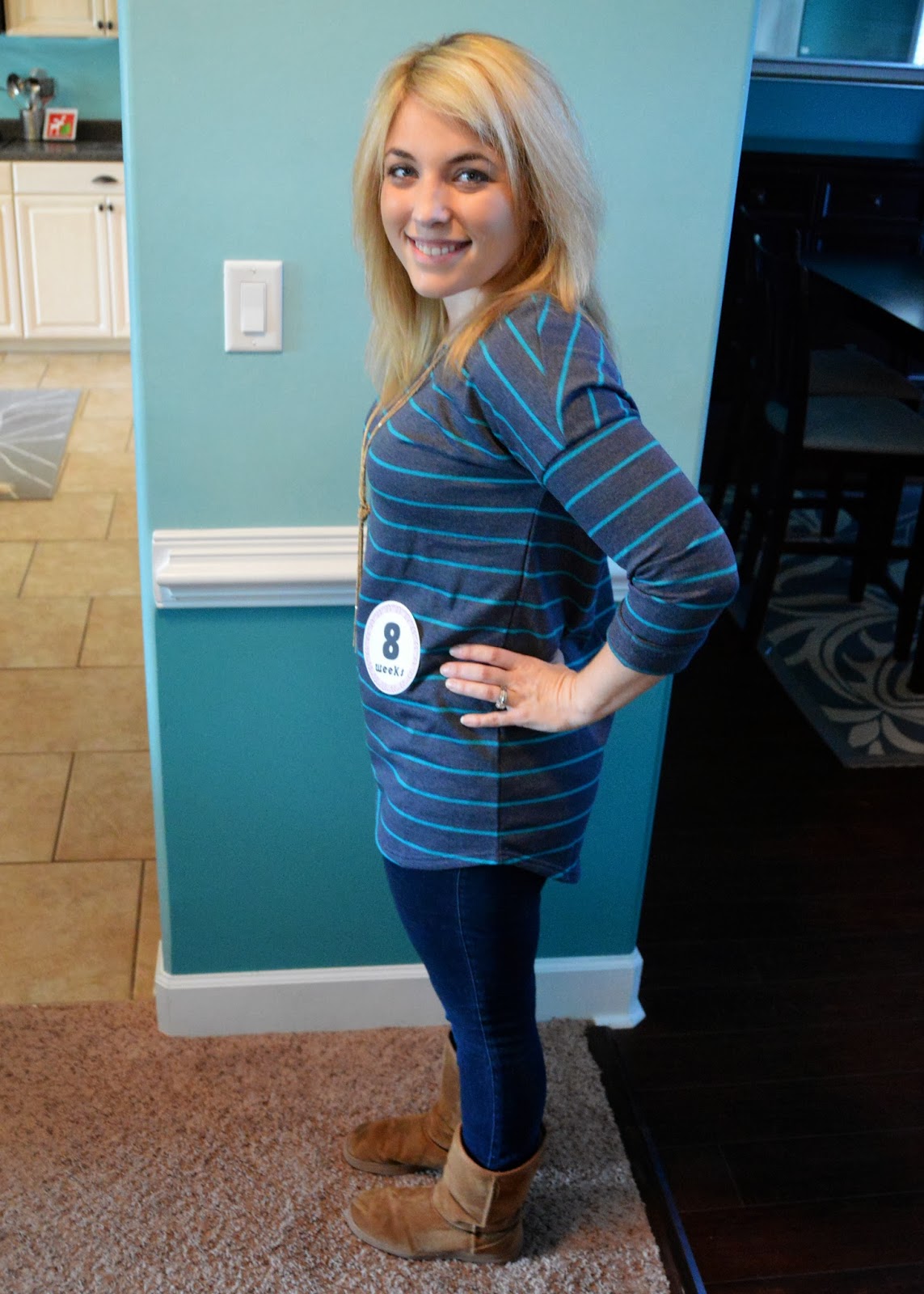 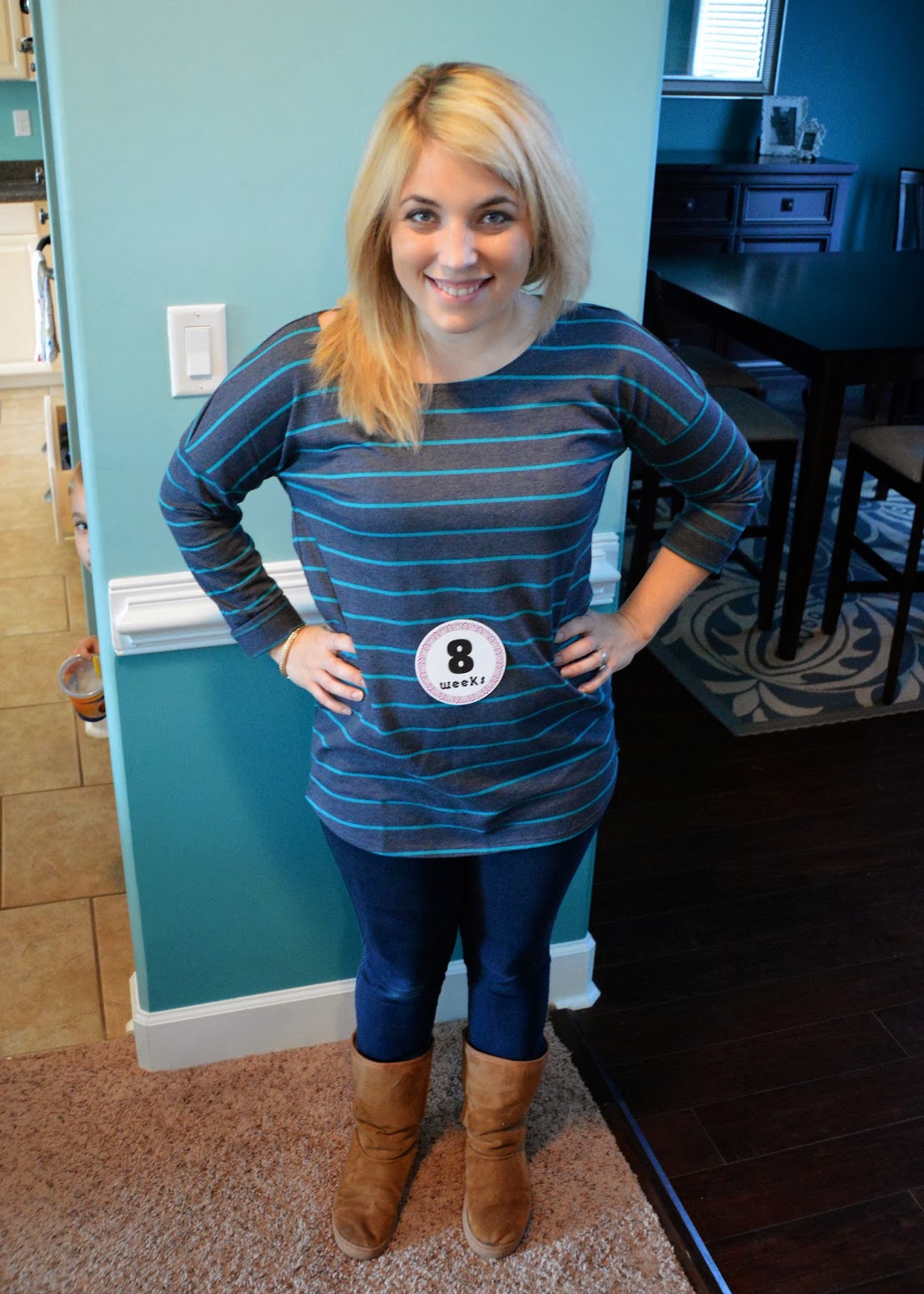 I’ve had two OB appointments already so I wanna catch up about those and about my foot fate and then we’ll be on track! My goal is to stay “current” with pregnancy blogging and get caught up with the other parts of life on the blog slowly but surely 😉