Back in the day Zach used to try to bring home Kye a “prize” whenever he traveled. We have faded that tradition out as it got to be pretty tough to remember to get the prize and, really, why do the kids need a prize anyways? Daddy coming back home from working is prize enough! Anyways, back when he was doing the prizes he went on a work trip with Jordan to the Atlanta area and brought Kye back home a stuffed bear from the City of Smyrna (Jordan’s uncle is the mayor of the town, I believe?). Kye instantly fell in LOVE with it and we ended up naming him Smyrna and allowing Kye to sleep with him. Sidenote: I regret letting Smyrna become a bedtime friend. Britt will only ever be allowed to have her ONE friend to sleep with!

Here is when Kye and Smyrna first became buddies…back in August 2011! 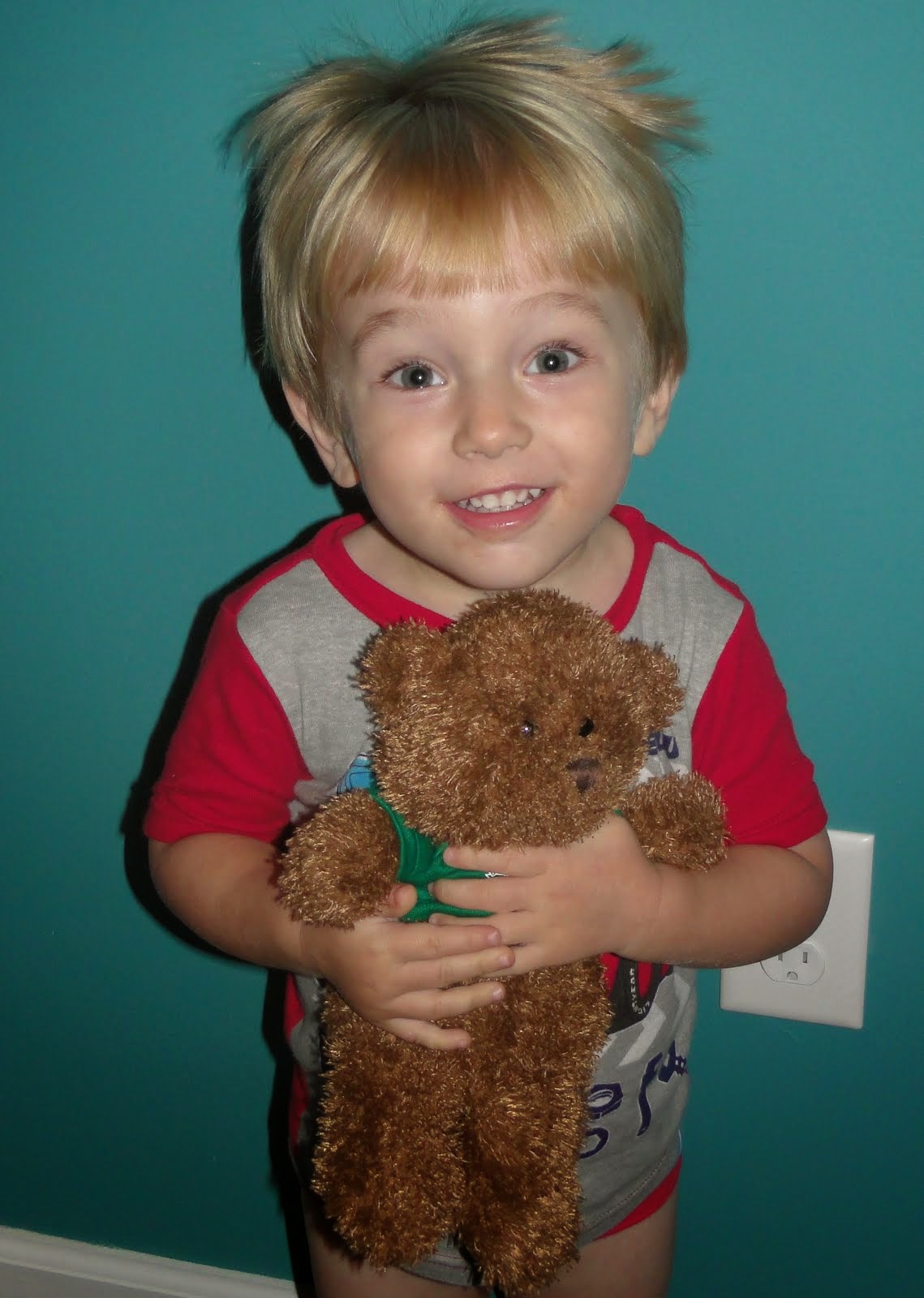 Now that Kye is upstairs Zach and I rarely spend time in Kye’s room. We go up there to tuck him in for naps and for night time sleep but that’s about it. We have a lamp in his room on a timer that turns on each morning and each afternoon to let Kye know he’s allowed to get out of the bed and come down stairs. It turns on at 7:10 in the morning and 3:00 in the afternoon and the lamp stays on for an entire hour each time. This is to allow Kye some light to be able to get ready and it also allows a time frame for him to wake up if he’s still sleeping when the lamp turns on initially.

As everyone pretty much knows…I was born without the ability to smell. I have always been concerned that it would be a safety issue at some point. I do remember one time in high school at my boyfriends house I left the gas stove on and didn’t smell it. His whole family smoked and smoked in their home so we got mega lucky that someone else smelled the gas and turned it off before anyone lit cigarette!

Thank the LORD this event happened the morning it did. My usual school morning routine does not include going upstairs in Kye’s room at all. We rush around and leave the house to take him to school and are gone for an hour or so before returning home, unless we have errands then we are gone even longer. Many mornings Zach is home to help the kids get breakfast and such and he’s getting ready for work. Some mornings though Zach leaves before the kids are even awake! I am so, so thankful that Zach was HOME on this morning!

We were doing our regular morning stuff and Zach walked by the stairs and smelled something. He went upstairs and I just heard “oh no.” He came downstairs and had Smyrna with him and poor Smyrna looked like this: 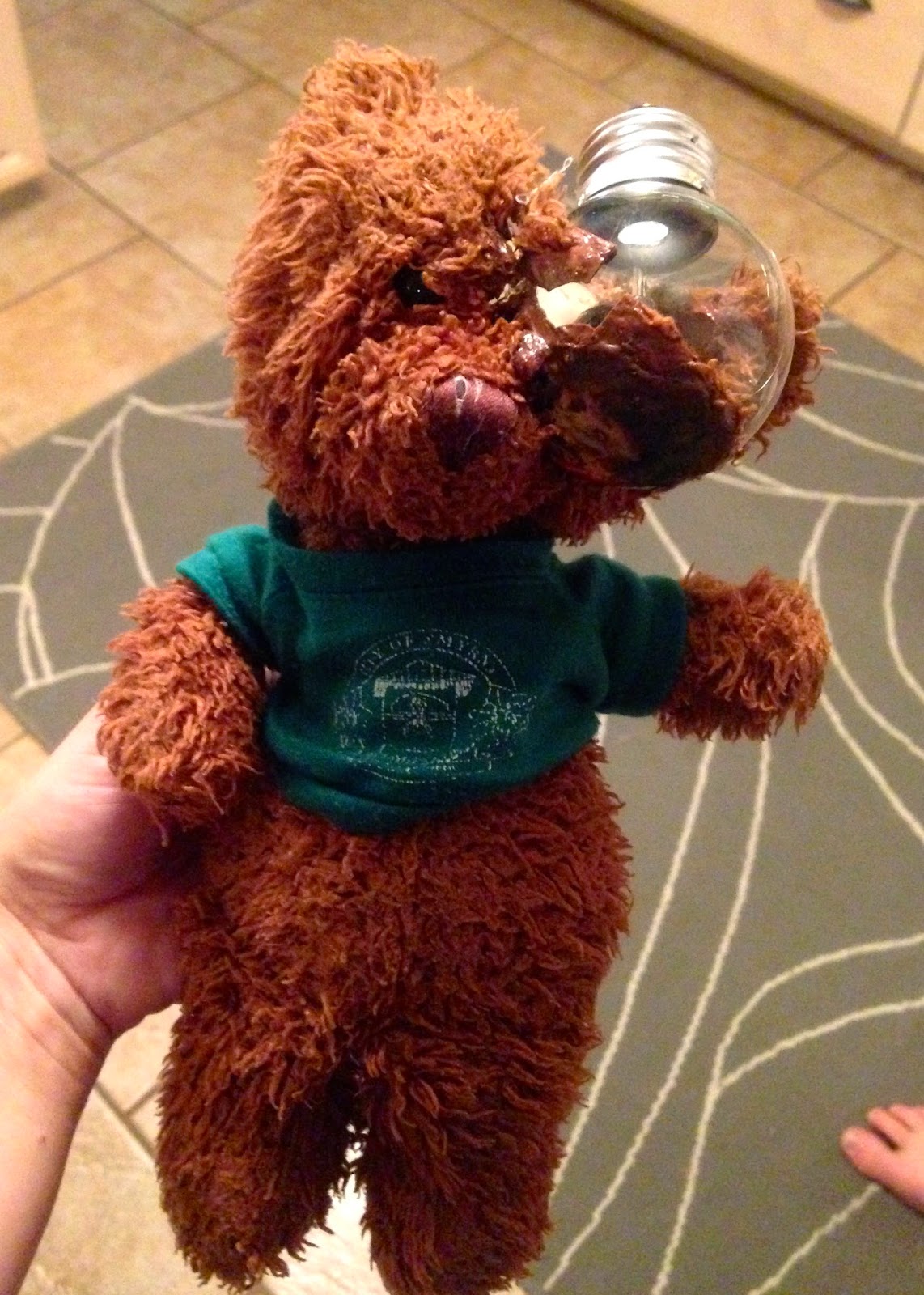 Kye was SO upset. It turns out that Kye had thought he’d be funny and hide Smyrna when he got up so he put him on top of the lamp in his room. Smyrna fell into the lamp and actually melted on the lightbulb. If Zach hadn’t smelled it then our house surely would have been on fire by the time I got back from taking Kye to school!!!

When I saw Smyrna I assumed our path of parenting would be to go the route of a lesson about death. Maybe even do a mock funeral or something? But Zach said no way. He felt very strongly that it was an opportunity to show Kye that just because something isn’t perfect doesn’t mean it’s not still special and that all people are different and that it’s okay to be different. He didn’t want to bury Smyrna just because he was injured…he wanted to fix him. Isn’t that so adorable?!?!

So Zach went to work…Smyrna had brain surgery on our kitchen table. 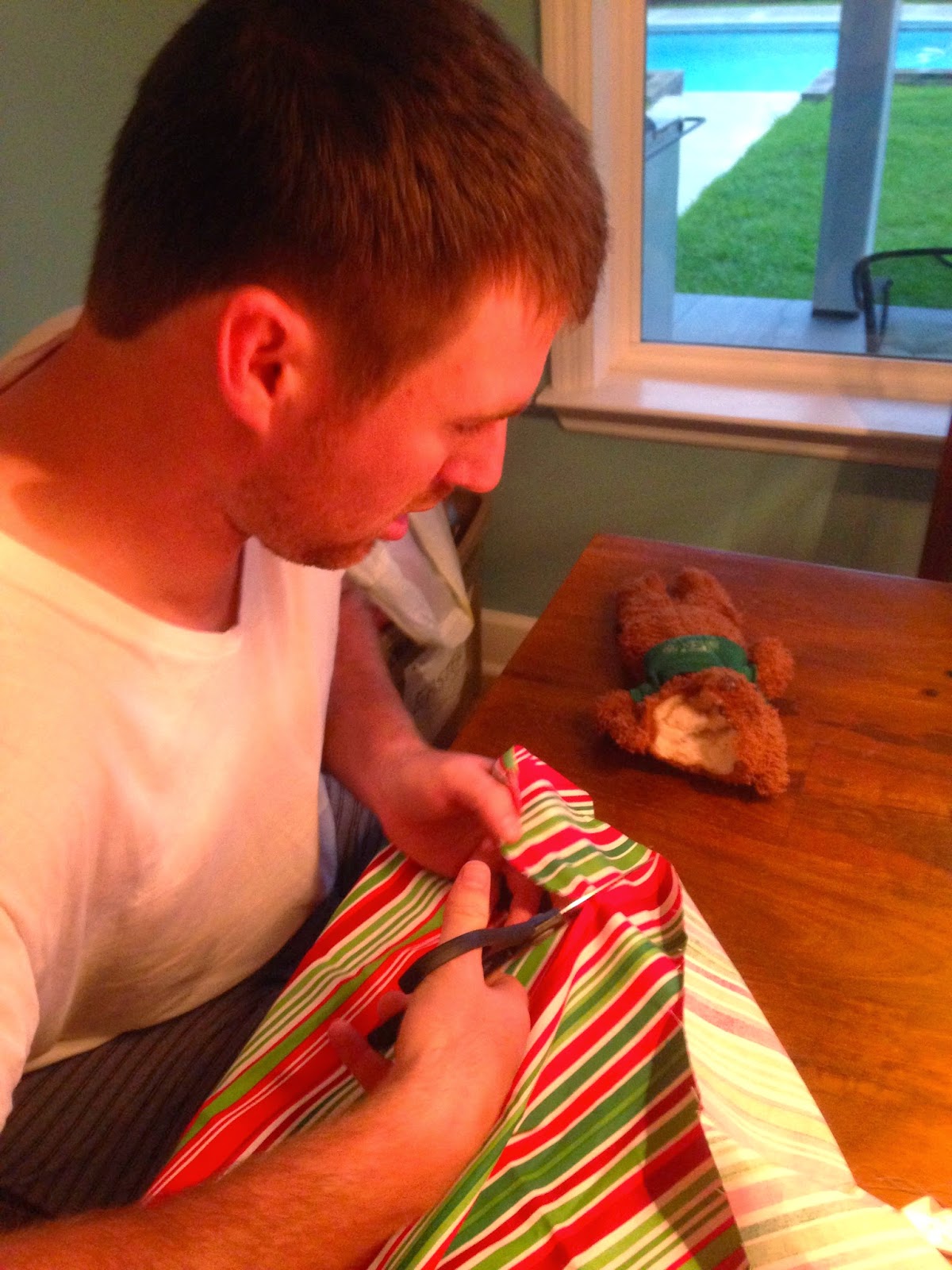 Kye couldn’t even look at Smyrna and said a lot of prayers that he would be okay. Britt was so concerned and kept comforting Kye and kept patting Smyrna and saying “you be okay” It was so sweet! I don’t have a lot of fabric at our house (I do NOT sew) but had some random left over stuff from when I tried doing some appliqué things awhile back. We let Kye pick which fabric he wanted and he chose a rather Christmas looking one but whatever! Also randomly Casey had JUST given me some pillow stuffing so Zach was able to use that during his surgery procedure. 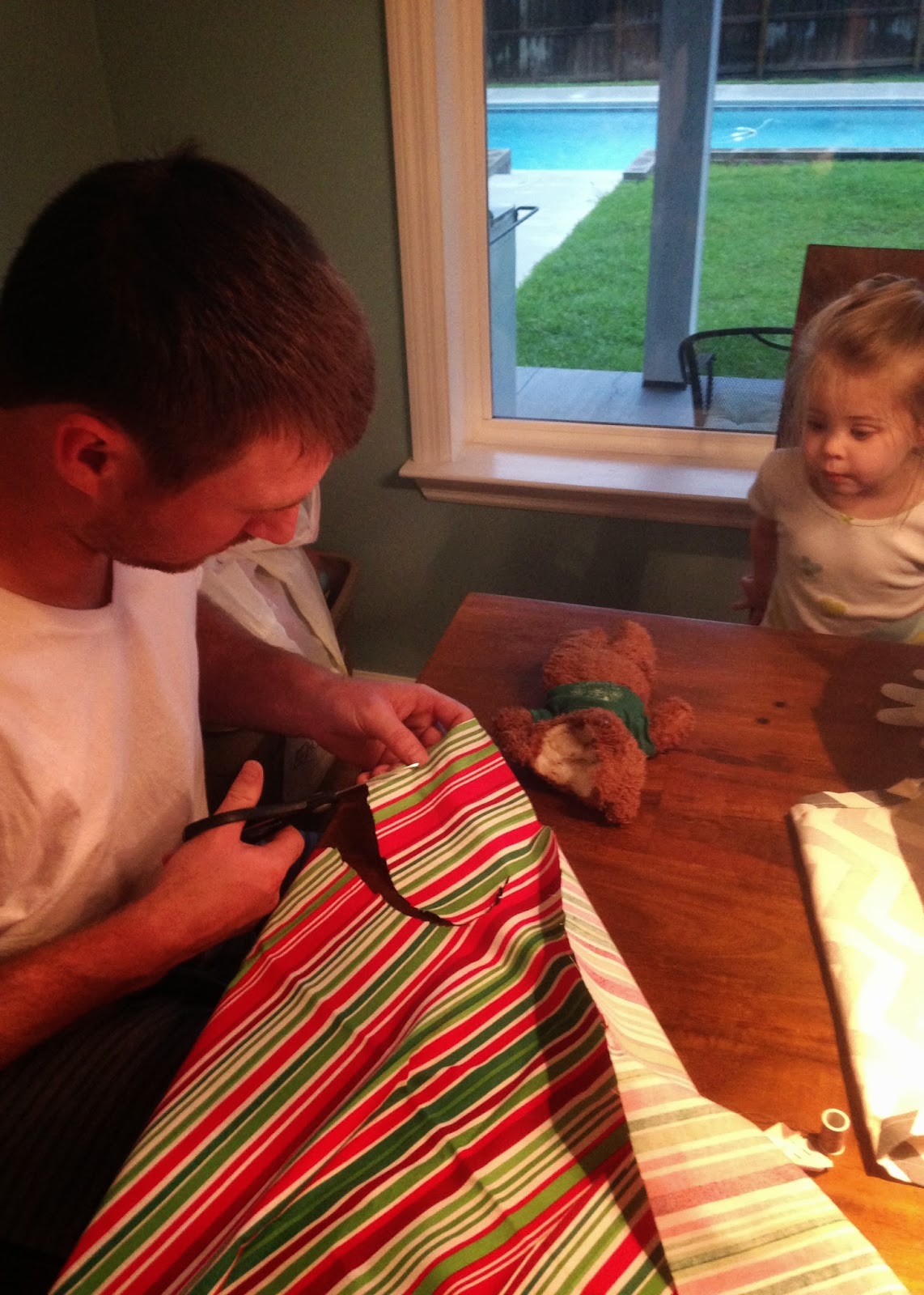 I personally was pretty dang impressed with how he turned out! It was proof that Daddy really CAN fix ANYTHING! Zach was so adorable about it all and even insisted on finding a button to use for Smyrna’s eye. For having his head melted by a light bulb I think the guy came out looking pretty good. I’m sure he has permanent brain damage, and obviously only now has the one working eye…but he got to keep his ear which is great! Daddy of the Year award goes to Zach for this one for sure!!! 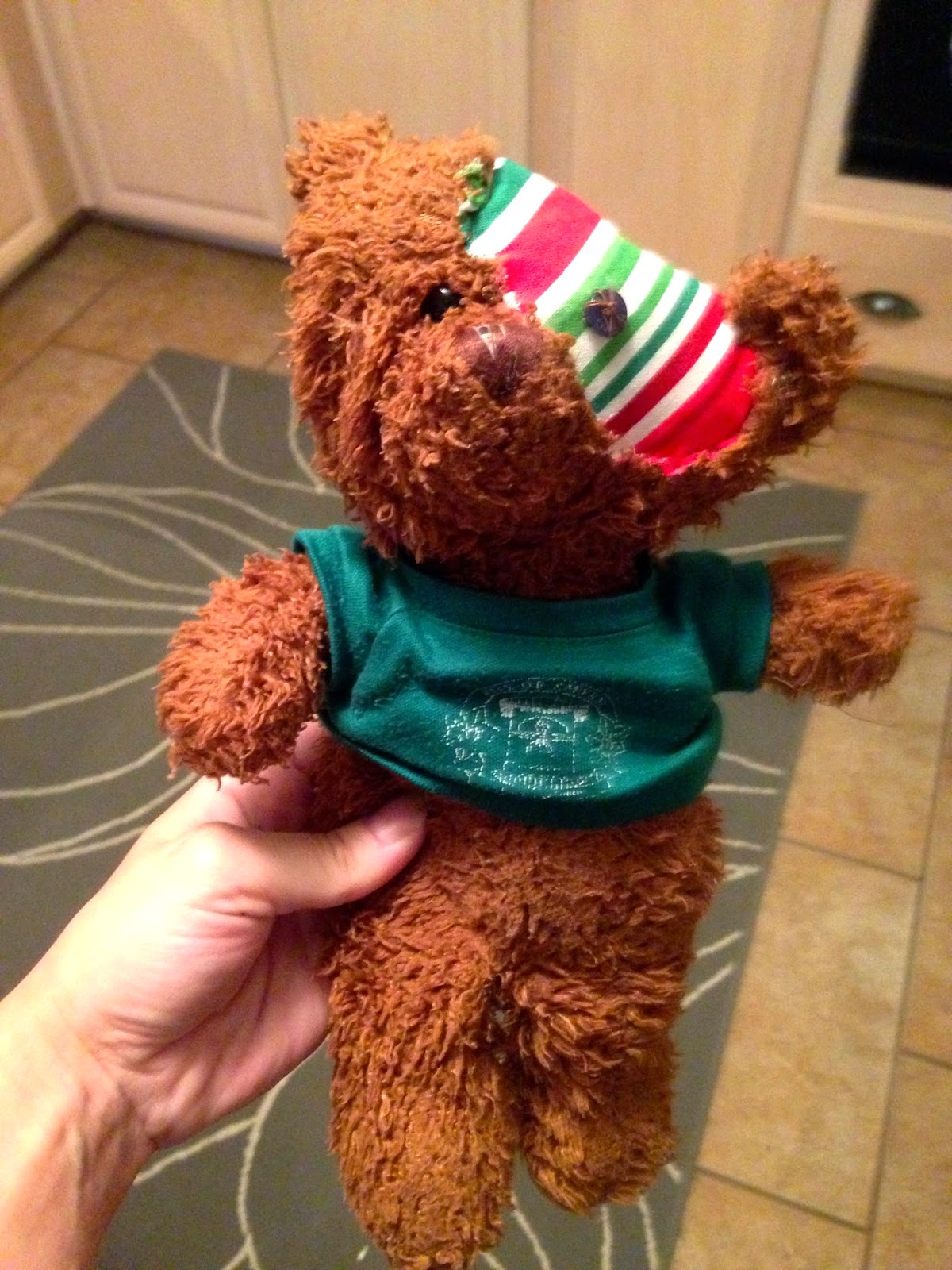 Kye did pretty well with the whole thing. He was upset with us that we didn’t ever teach him not to put things on his lamp. To which I went ahead and told him he shouldn’t ever put things on top of his ceiling fan either. I mean who thinks to tell a kid not to put stuff on a lamp?!?! I think Kye has the whole “place the blame on some one else” thing down 😉 He did feel awful about it and was very concerned but once Smyrna was fixed he was a lot happier! 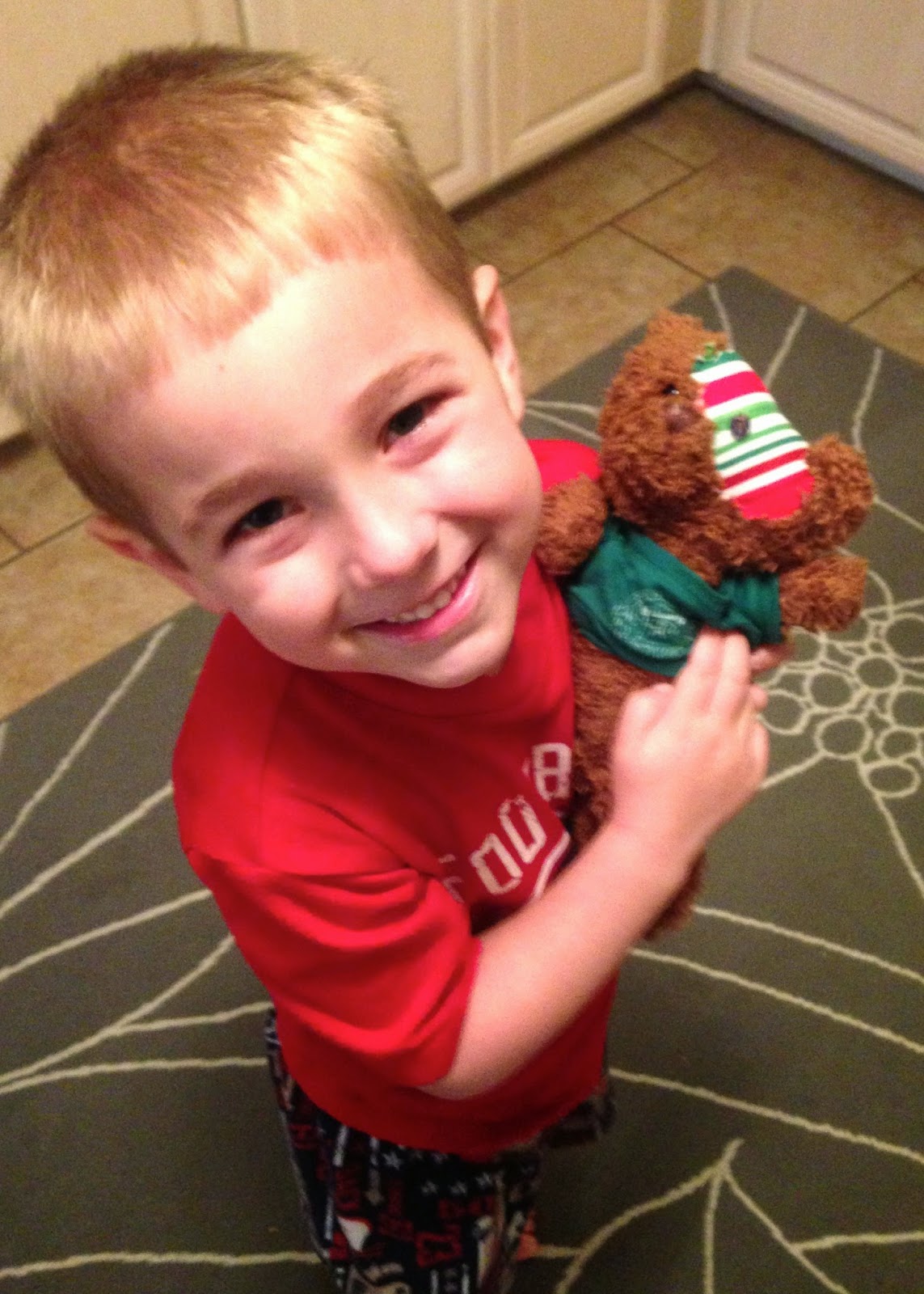 We tried to get Kye to give Smyrna super powers. I mean the bear does have a GREAT super hero back story. Survived a light bulb being stuck in his head? Plus the fabric totally makes for a great super hero mask…but Kye didn’t want him to have any special powers. He just wanted him to stay Smyrna.

After nap that day Kye came down and told me he was so upset b/c he couldn’t sleep with Smyrna anymore. Not because of how he looked…but because he smelled like smoke. Oops. Another issue with the whole not being able to smell thing! I ended up washing all of his bedding as well as Smyrna that afternoon and he said it all smelled better at bed time 🙂

Jordan was SO sweet about it all and got Kye a new Smyrna from his uncle! It was SO nice and he brought it over and we thought Kye might like the new one better…but he totally rejected the new one. The new one is slightly larger, has slightly darker fur, and has a purple shirt rather than the green one. Kye was appreciative but “new Smyrna” lives in the chest with the other friends and didn’t make the cut to replace old Smyrna!

There truly is never a dull moment with children huh? So thankful for my talented and sweet husband to mend our boys buddy 🙂