It’s long. And it’s MEGA picture heavy but it’s useful if you’re beginning with Baby Led Weaning and like a example of what it looks like!

I pretty much was in denial that I had to start feeding Tess solids. I waited until she was a little over 6 months old.

I kept dreading it and then I re-read Baby-Led Weaning…and it got me excited for solids.

I forgot what a fun method it is! Trying different foods with her is an exciting time 🙂

In the I baked stuff for Britt but I decided this time to bust out my steamer.

Zach bought it for me as a gift one year (yes, he learned that you never buy women appliances as presents after this present haha!) and I haven’t ever used it. Um. It’s awesome.

Do you own a steamer? Because if you don’t, you should! Mine is one by Black & Decker!

I never realized how dang easy they are to use.

I just stuck the broccoli in, added water to the bottom, and set the timer then bam! it was done and the broccoli was the perfect softness for her first food 🙂

I decided to go ahead and give her solids for the first time just a few days after she turned 6 months old.

And you can also read about THE best Baby Led Weaning items to have here!

I took a lot of pics of her with her first food, because it only happens once!

Here’s a video of her whole first experience 🙂

I LOVE her facial expressions when trying new foods haha

Here’s a video of her figuring it out (and Kye’s reading skills too!)

Baby-Led Weaning talks a lot about how meal time is more about playing and exploring than actual eating and Tess’s first time with solids was for sure more about the play than the eating.

She just had fun with it and would have sat there all day if I’d let her! She didn’t actually “eat” anything which isn’t how Britt was at all when she first had solids (remember?).

I also offered her a sippy cup of water for the first time that same day.

I Take and Toss 7 oz Cups as a first sippy cup.

Both of my older kids actually still use the Take and Toss cups in the larger size (Britt still needs a sippy lid but Kye will use the type with a straw for when we go out and about and I want to keep things clean!). 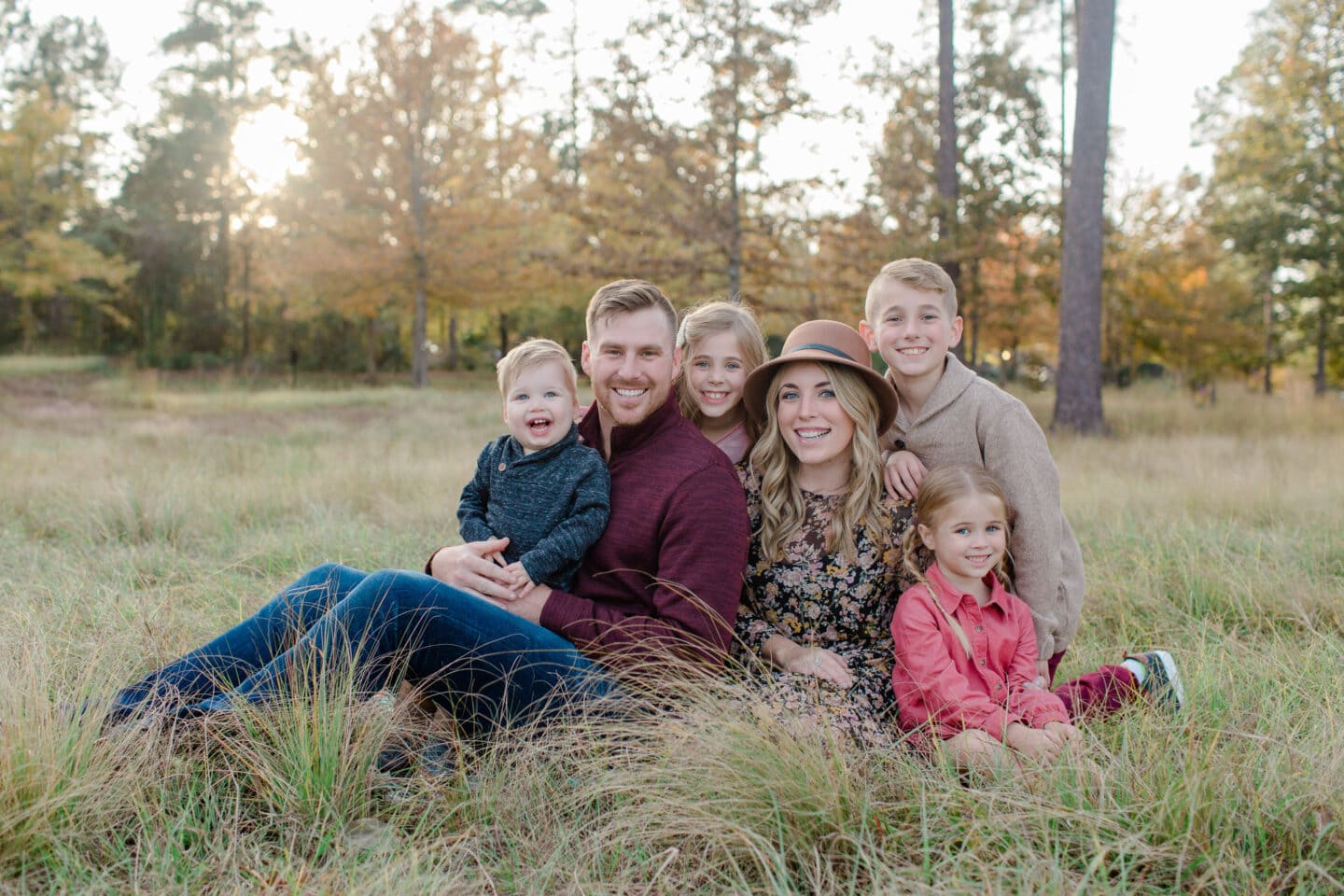 I have tried MANY different types of with my babies and just always come back to the Take and Toss.

They are easy for babies to hold and just seem to be the best cup I’ve found (and, hello, they are CHEAP).

With Britt I would have her have a “water time” in the afternoons but with Tess she is just getting a sippy cup with her meals.

It’s hard enough to fit in time for her to eat solids…I can’t worry about a specific time of the day for water too!

She surprised me with how well she did with the cup right away and with how much she liked water!

Being that Tess is my 3rd baby I didn’t have any concerns over how feeding solids would go.

I felt confident in my decision to use Baby-Led Weaning and I didn’t feel any pressure for her to eat a certain amount or anything like that.

Being that Tess is my 3rd baby…my concerns weren’t about how or what to feed her but when to feed her.

Our schedule at this point is pretty tight.

There isn’t time for her to have solids after she nurses at 7 because we have to rush the big kids to school.

Then she nurses at 7 before going to sleep for the night. I was stuck about when to feed her.

Liquid feedings are most important for her for the 1st year so I wanted to nurse her first if at all possible.

I ended up deciding to give her solids after her 7 am session on days when Zach can take the big kids to school or on days that they don’t have school (weekends!).

Then she’d wait and eat her lunch solids when the kids ate their lunch.

No solids after she nurses at 3.

It’s not ideal, but it works and we are in a good groove with it.

I don’t feel stressed on days that she only eats solids twice. Or even sometimes if it happens where she only has them once!

But the goal is 3 times a day, when possible. Most often though she gets to eat them at lunch and dinner 🙂

Bananas…and still not really “getting it” with how to eat solids! I use a crinkle cutter to cut fresh banana into “finger like” shapes for her to be able to grasp and pick up.

More interested in eating her bib than the food 🙂 I really, really love the Bumkins Bibs!

It’s so great that they have Disney ones now too 🙂 I love that they are machine washable, rinse clean super easily, and have the pocket to catch things she drops!

She figured it out 🙂

Cucumber! I read that it is best served fresh from the fridge and that it helps with teething pain 🙂

Apples! With Britt I baked them, but for Tess I did them fresh. I just cut some slices and left the peel on. It is AMAZING to watch her eat apples. She will put it in her mouth and then pull out the peel and have it completely cleaned off! Obviously this wasn’t something she did the first time, but it’s been something she’s done more and more as she’s mastered eating solids.

The faces she makes CRACK me up!

Pears, which I also give to her fresh with the peel

It did not take long for her to chew and digest the food. Her diaper changed to have chunks of food in the poop pretty quickly! It also started to get messy pretty fast too 🙂

On Feb 14th we set up the new high chair ! She was so stinking cute in it and started to lounge while she ate 🙂 We also gave her some mashed up grapes for the firs time that day.

We ate lunch at church so she had strawberries for the first time! They were fresh and whole!

Green beans and Cauliflower (both steamed with my steamer)

She’s SO happy at meal times!

I was cutting up some kiwi for the big kids and figured why not just give her some pieces to see what happens.

I was SHOCKED that she could already use her pincher grasp to pick them up and eat them!

It’d been about 15 days since Tess had pooped.

She had a few small “droppings” but they weren’t like a GOOD, big poop.

I read that it’s common for babies to get constipated when first exploring solid foods.

And since she was so efficient with her eating and she was for sure swallowing the food, I was worried she was constipated.

I did a good bit of research and decided to stop feeding her any other foods except for pears and peaches.

I read that both of get things going 🙂

I also gave her some diluted prune juice. I am not big on juice but I offered it to her for a days because I wanted to help the poop situation happen.

I was never constipated in my life until I was pregnant with Tess. And she’s also my first baby who has been constipated. Isn’t that strange how that works???

I remember how miserable I felt and I didn’t want her to be uncomfortable.

I also did the thermometer in her hiney thing at diaper changes (with a TON of Vaseline on it!). That was also a first for me and I was nervous about it.

Everything I did worked and she finally had a BIG poop diaper! Since then I make sure to offer her pears or peaches once a day and we haven’t had any other issues!

I cooked some chicken and left it plain but cut it into the finger length shapes and she had her first meet at dinner! She did great with it!

Casey gave me the idea of making some “pancakes” for Tess. I used whole wheat flour and in place of the liquid for the pancakes I used 2 mashed up bananas and 2 mashed up apples. I froze them to use for her later on and served them to her as well as Kye and Britt for dinner. Everyone loved them! Easy, quick, and healthy! And it was Tess’s first time having bread 🙂

I made her some oatmeal for the first time

And it was her first time having eggs 🙂

Also on March 1st I gave her some greek yogurt and decided to do something different for her than I did with Britt.

With I just gave her piles of the more liquid type foods and let her eat it with her fingers. Hello MESS.

With I thought I’d try giving it to her on the spoon rather than on her tray. It went well and I was surprised how quickly she figured out how to use the spoon 🙂

It really is so fun to see her discover new foods and to watch her eat! She’s done FABULOUS with solids.

She is less messy than Britt was in her eating (although she can still make quite the mess) and she swallows SO much of the food she eats. It shocks me!

She truly ENJOYS food and it makes it so enjoyable for us all. The kids love laughing at her 🙂

You can see Britt’s 1st month of solids here 🙂

Kye did baby food at first so it’s a different comparison (and I started solids then stopped then started again!) but you can see his first time here and then his second first time here 🙂

Feeling a bit overwhelmed about introducing solid food into your baby’s diet while making meals the whole family will enjoy?

Be sure to check out this awesome, super simple, four week baby led weaning family meal plan! Easy ideas the whole family will enjoy around the dinner table – including your newest solid food eater 😉