Having one child makes scheduling things pretty easy…but now that we have three? It’s much more difficult to schedule everything and not have stuff overlap. I’ve really had to accept that this is going to happen, and it’s going to happen often. Praise the LORD for a super mega involved husband who can arrange his schedule to divide and conquer with me. And further praise for my ammmmmazing mother in law who can help us pick up the slack on days we just can’t conquer on our own!!! It takes a village and my village is awesome 🙂

Tess’s 6 month well check fell on the same morning as Kye’s Muffins with Mom. I’ll be honest: I wanted to be at Tess’s appointment. I had a LOT of questions and I have such a comfortable relationship with the staff at their office that I just wanted to be the one there. However, I knew that Kye’s Muffins with Mom was where I HAD to be. Tess doesn’t know I missed her appointment, but Kye would know if I missed his. And these days Tess’s needs tend to come first so I wanted to make sure Kye had his special Mommy time!

Zach took Kye to school and I took the girls to the appointment. I didn’t have to be at his school for our even until a little later so I was hoping to at least get some of the appointment done with me there. Turns out they got called back exactly when I was having to leave!

Both girls did so awesome in the waiting room!

Sidenote: the stuffed animal Britt has was mine as a kid and we have a family debate going about it…is it SIMBA or NALA? (#teamnala) 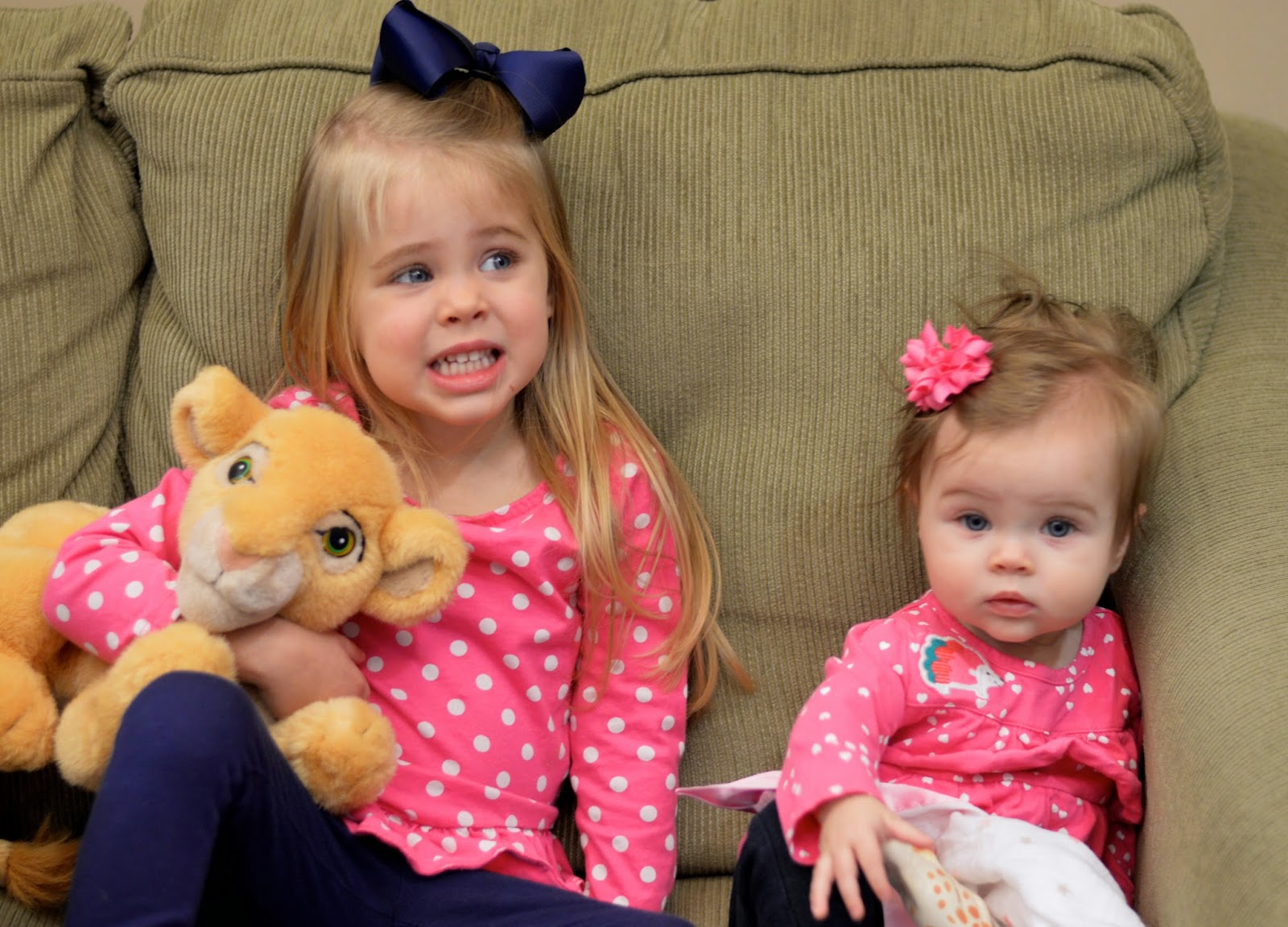 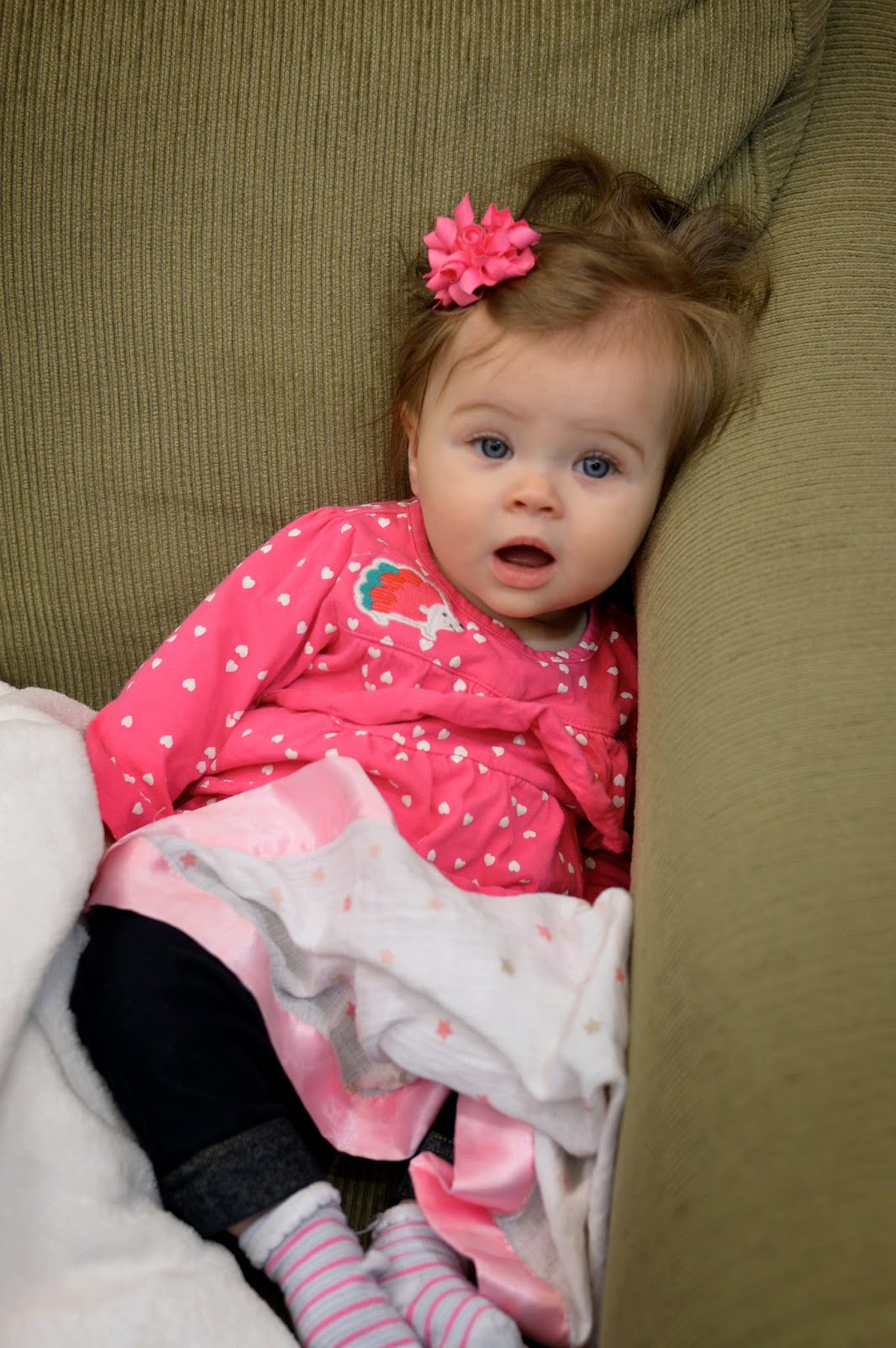 She kept checking on her sister 🙂 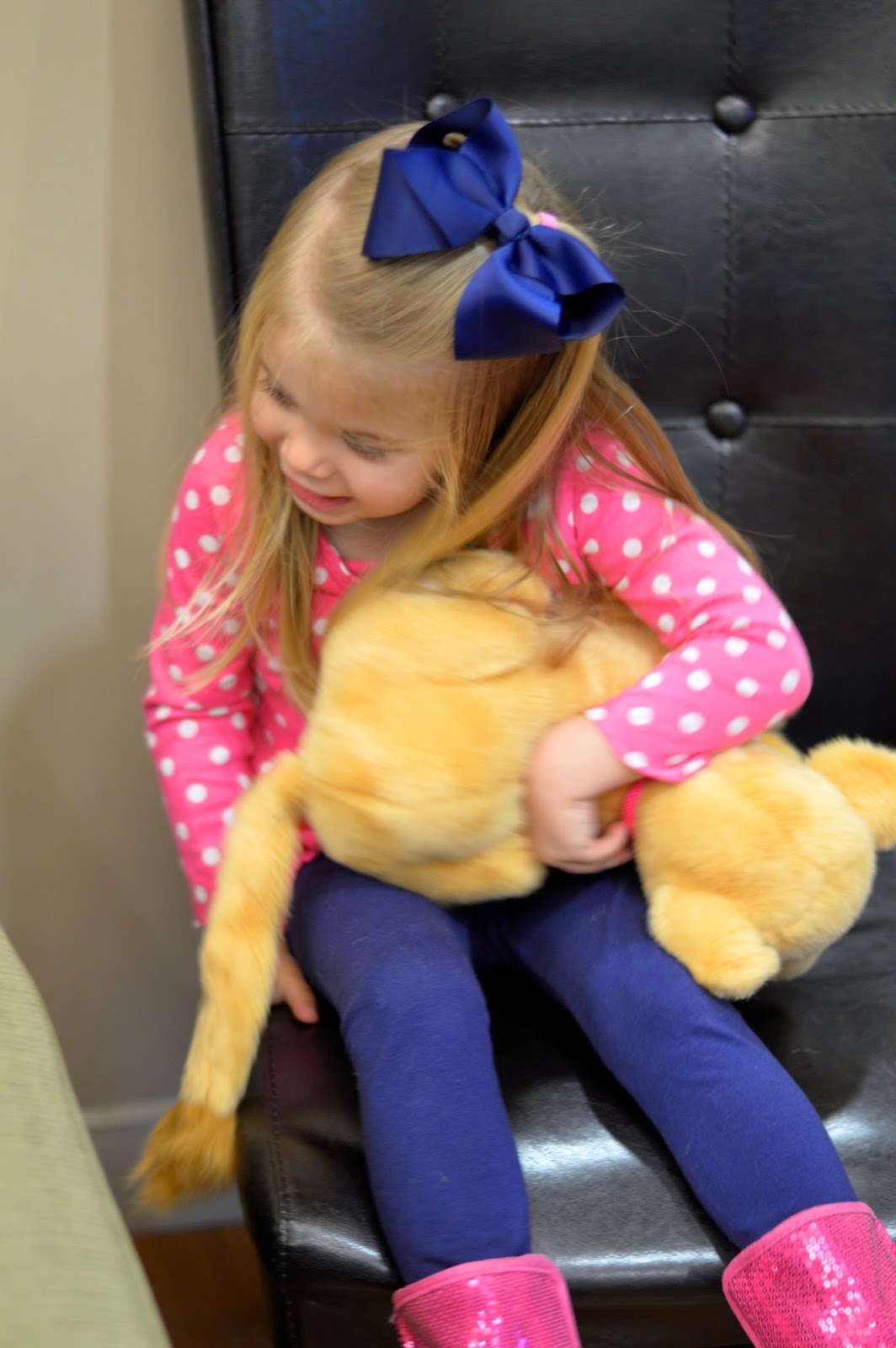 I talked to Zach about the importance of the appointment and apologized in advance for my hardcoreness about stuff haha. I totally sent him in there with a notebook that had my questions written out and big spaces for him to fill in the answers. No joke. I felt like I was tossing the poor guy to the wolves. I mean he had BOTH girls AND Tess had to miss her nap for the appointment.

While I had my hesitations about doing it, I’m really glad Zach handled it solo. Not only did he ROCK OUT at the visit (I’m sure the staff will be bragging on him when I go back for Tess’s 9 month check up!) but he got a TRUE taste of what I do. I think so often Dad’s think they know what it’s like for us moms but when they watch the kids they don’t keep the house spotless, feed healthy meals, and avoid tv. So it’s not a real taste of “mom life.” This dr appointment? It was a true look at how things are as a mom. Trying to keep a preschooler entertained, trying to get an infant to sleep, trying to remember all the questions you need to ask the dr…it’s a lot and I think he had a new appreciation for how I handle it on a regular basis 🙂

On top of managing the appointment…the guy even took pics. I mean HELLO I found me a keeper! 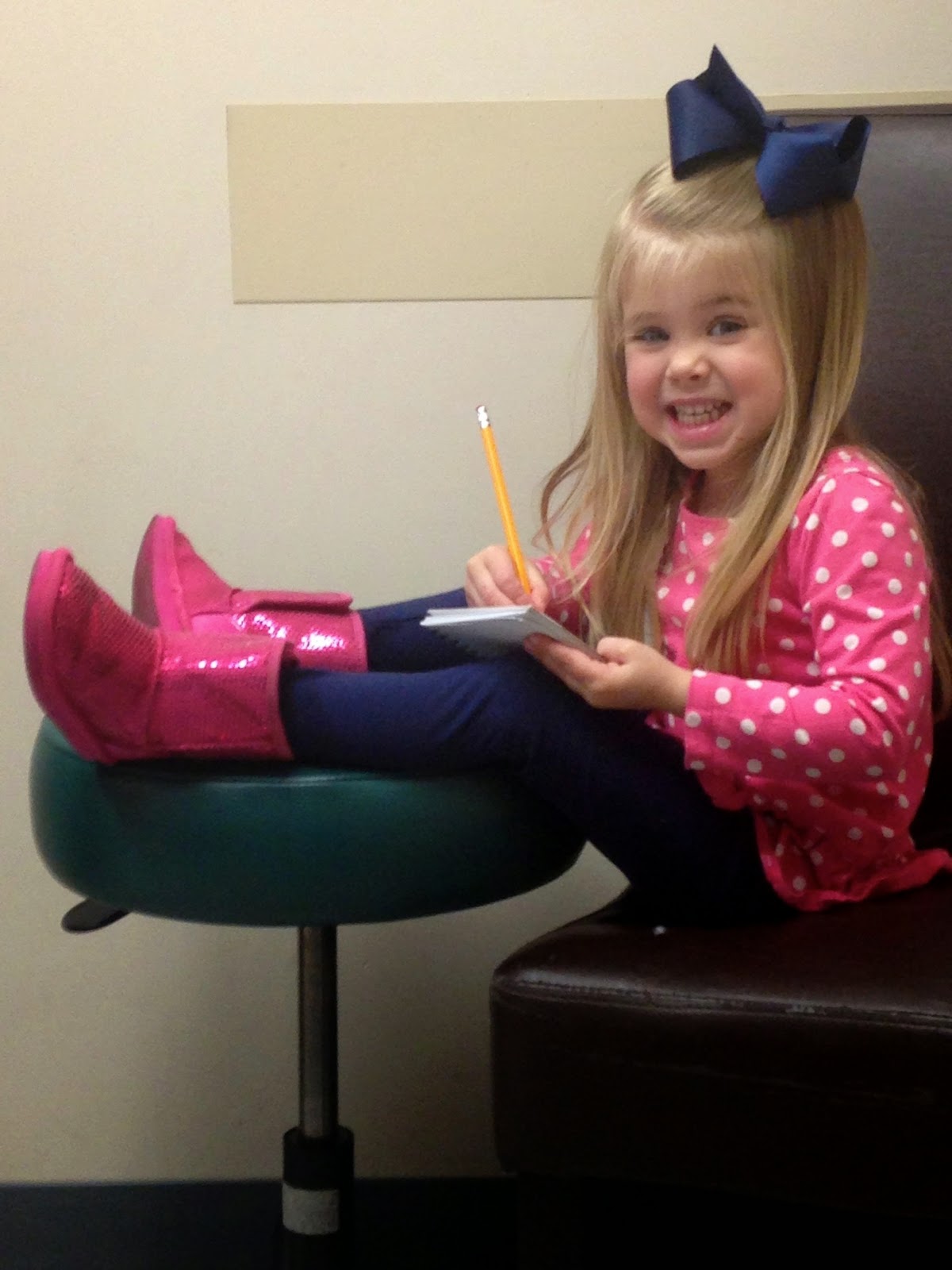 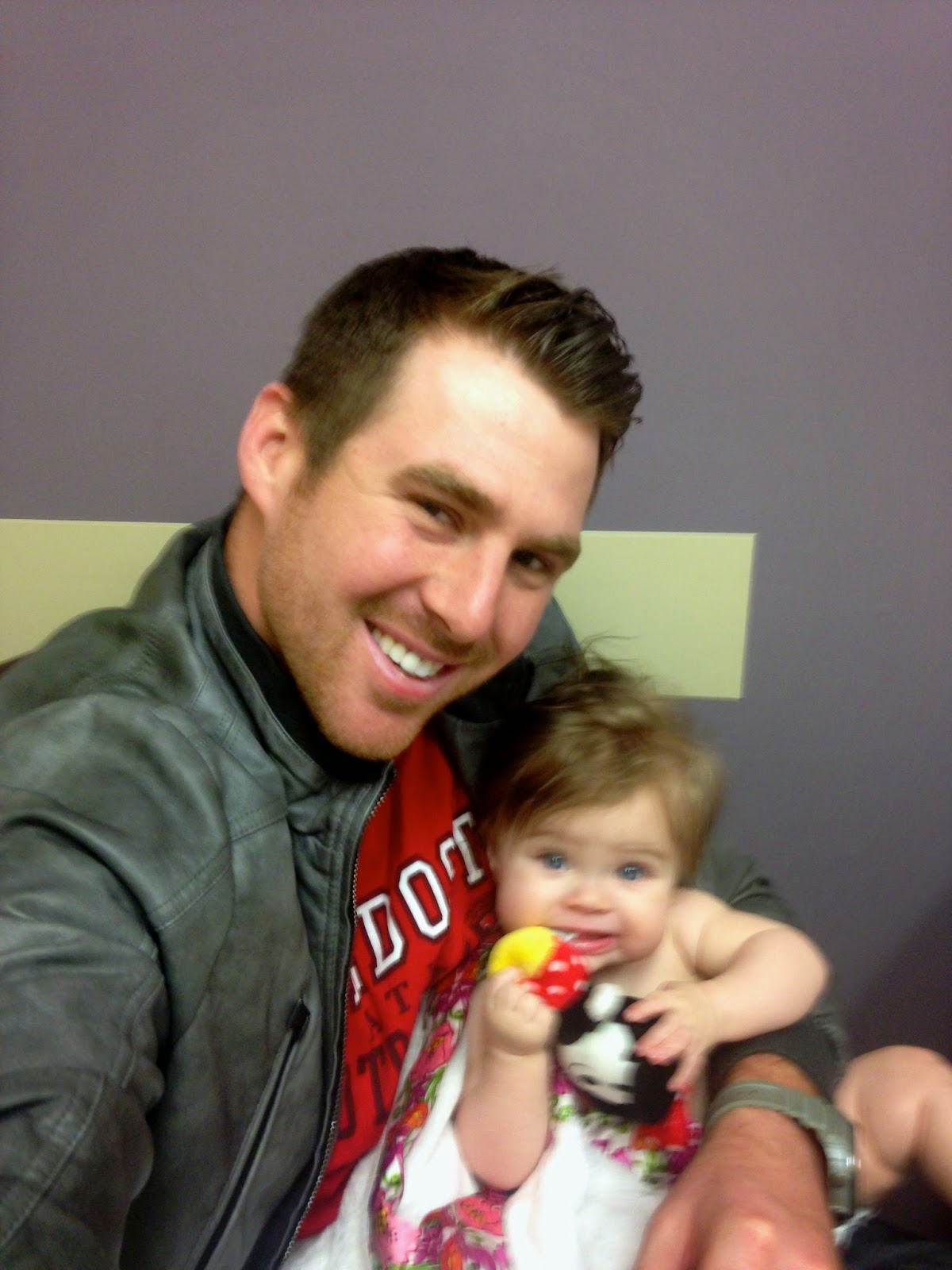 At Britt’s same visit she was 17.3 lbs (55th percentile), 27 inches long (50th percentile), 16.5 inch head circumference (24th percentile). I don’t get how Britt was longer yet in a smaller percentile? Maybe they changed the percentiles since then? I looked it up online and it says her length is 75th percentile, weight is between 10th and 25th and head is 25th. So maybe I had Britt’s wrong! I can’t believe they are so close in their lengths. Tess seems SO much smaller than Britt was!!! She doesn’t seem “long” to me at all and is still in such smaller sizes. The dress Britt was wearing at her 6 month visit is a 6-12 months, Tess’s outfit for this visit is a 3 month!

Here are all the questions I had and the answers to them:

Tess had shots at her visit including DTap, Hib, Hepatitis B, Polio, PCV13. She also got her flu shot. Child was EXHAUSTED after the appointment!

Zach said both girls did great. He was able to get Tess to sleep a little bit in his arms (hard to do with a well trained baby wise baby!). I’m SO thankful he was able to go and it makes me look at him in a new light with new appreciation 🙂 His mom had even offered to go with him and he said no, that he wanted to handle it solo. They are his kids and he can take care of them just fine 🙂