Taylor was my maid of honor and super good friend in high school (and beyond!). OF COURSE when we got her wedding invitation in the mail we planned on going! I loved that Taylor was up front with me and said they weren’t having kids attend. That way we could make plans to be there but also be sure to have plans for Kye. We decided to take the opportunity to visit my dad and stay the weekend with him and Audrey. As a bonus they agreed to keep Kye while we attended the wedding! Worked out perfect 🙂

We drove up to Dad’s on April 29th (I’m over a month behind…not cool). Typically when we travel we leave at Kye’s nap. This was our first road trip with Kye since Thanksgiving. A LOT has changed since then. He’s fully potty trained, he’s in a big boy bed, and he’s done with the paci. It turns out he’s hit another milestone…and one that we aren’t too pumped about. He’ll no longer nap fully in the car. It’s just done 🙁 Boo! So he didn’t get but a 45 min cat nap the whole way up to Dad’s which set him up for a baddd mood. Not good! I hated that Dad and Audrey didn’t see him at his best especially since they don’t get to spend much time with him. But it was a valuable lesson for us, from now on we’ll be traveling prior to nap or after nap 🙂

When we arrived Grandpa had put together a little Easter basket for Kye!!! It was SO thoughtful and seriously made me so happy (and Kye too of course). He picked everything out himself and knows Kye’s love of monkeys. It’s so “Dad” b/c if you tell my dad you like something then he will go all out with it 😉 Kye got a new monkey towel for the pool, a monkey t-shirt, and a sweet monkey animal that is beyond realistic (we’re using it for practice with the baby!). Wasn’t that so sweet? 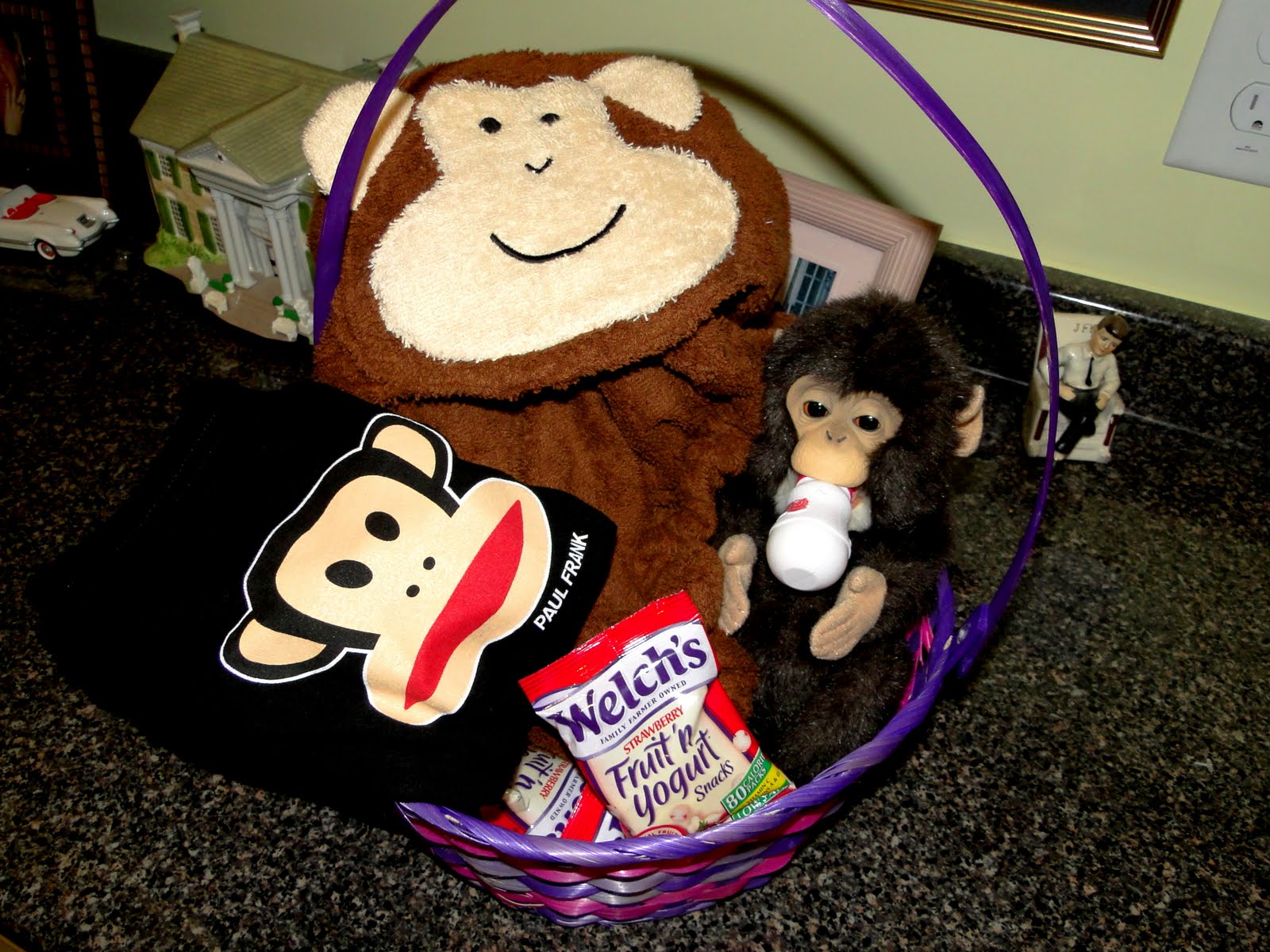 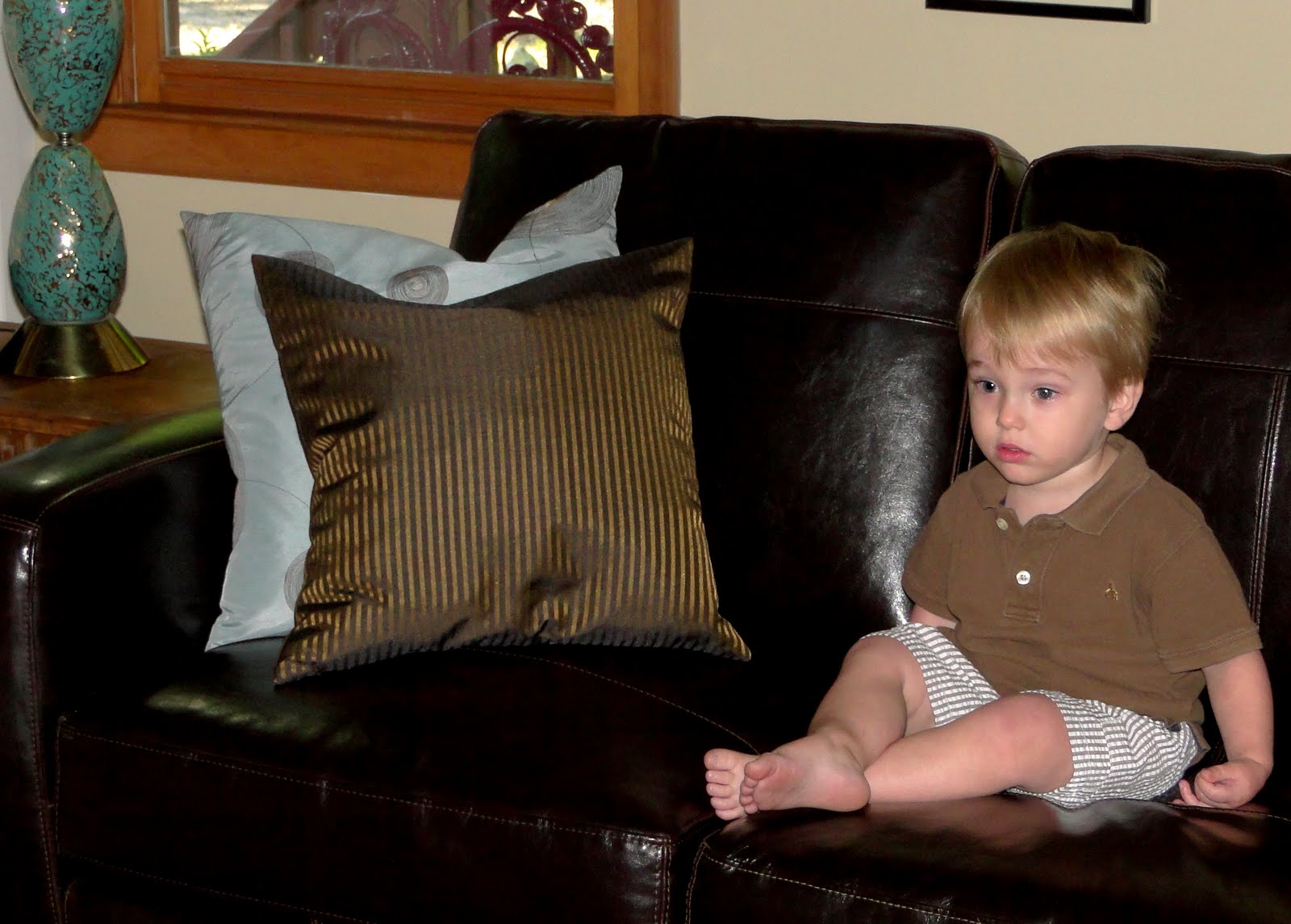 When we visited Dad’s in August, Kye enjoyed riding the argo with Daddy so they did that again this time too. I even rode for a few minutes…just long enough to remember how much I never really liked it (I always preferred the go-carts!). 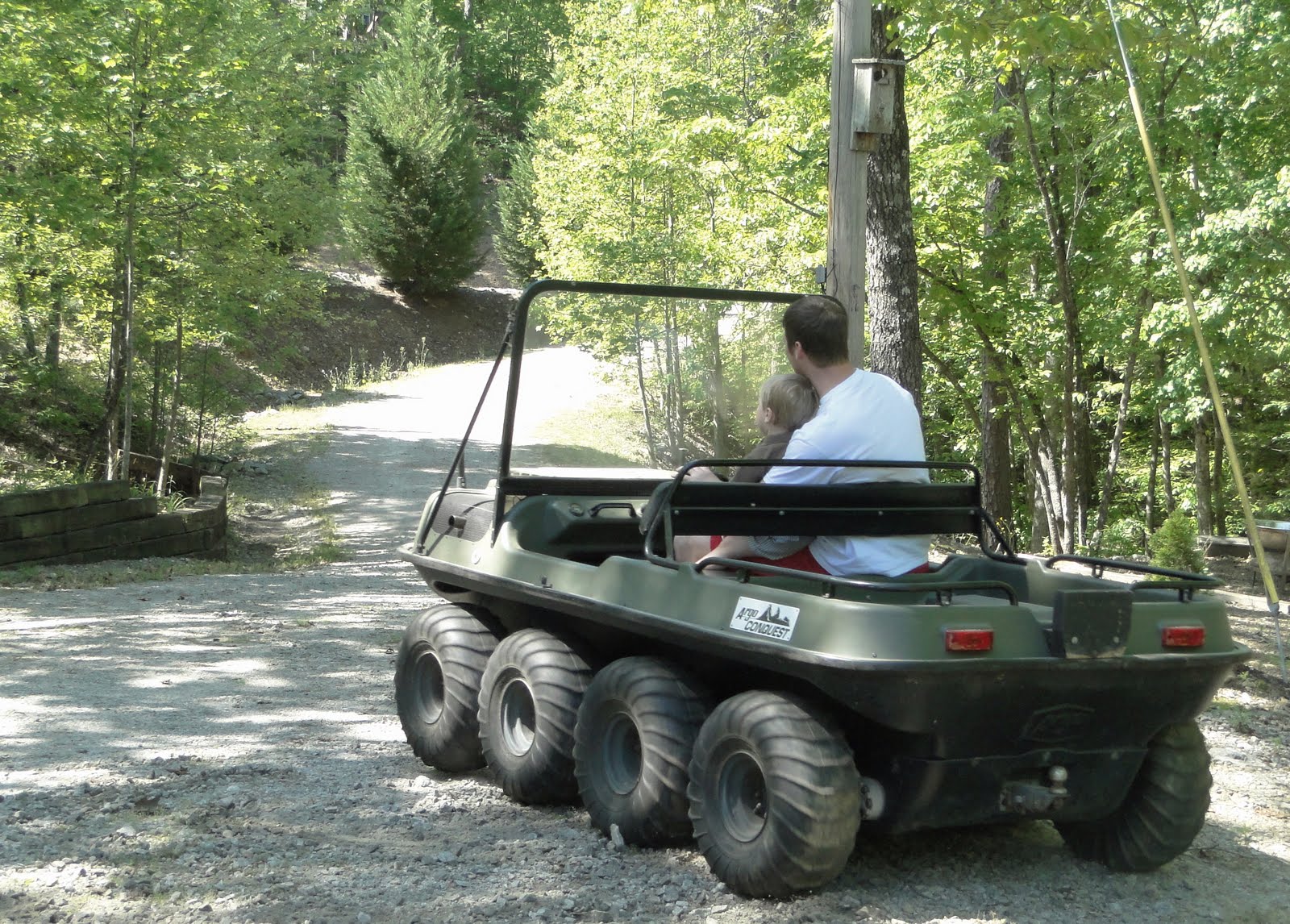 Driving away into the woods! 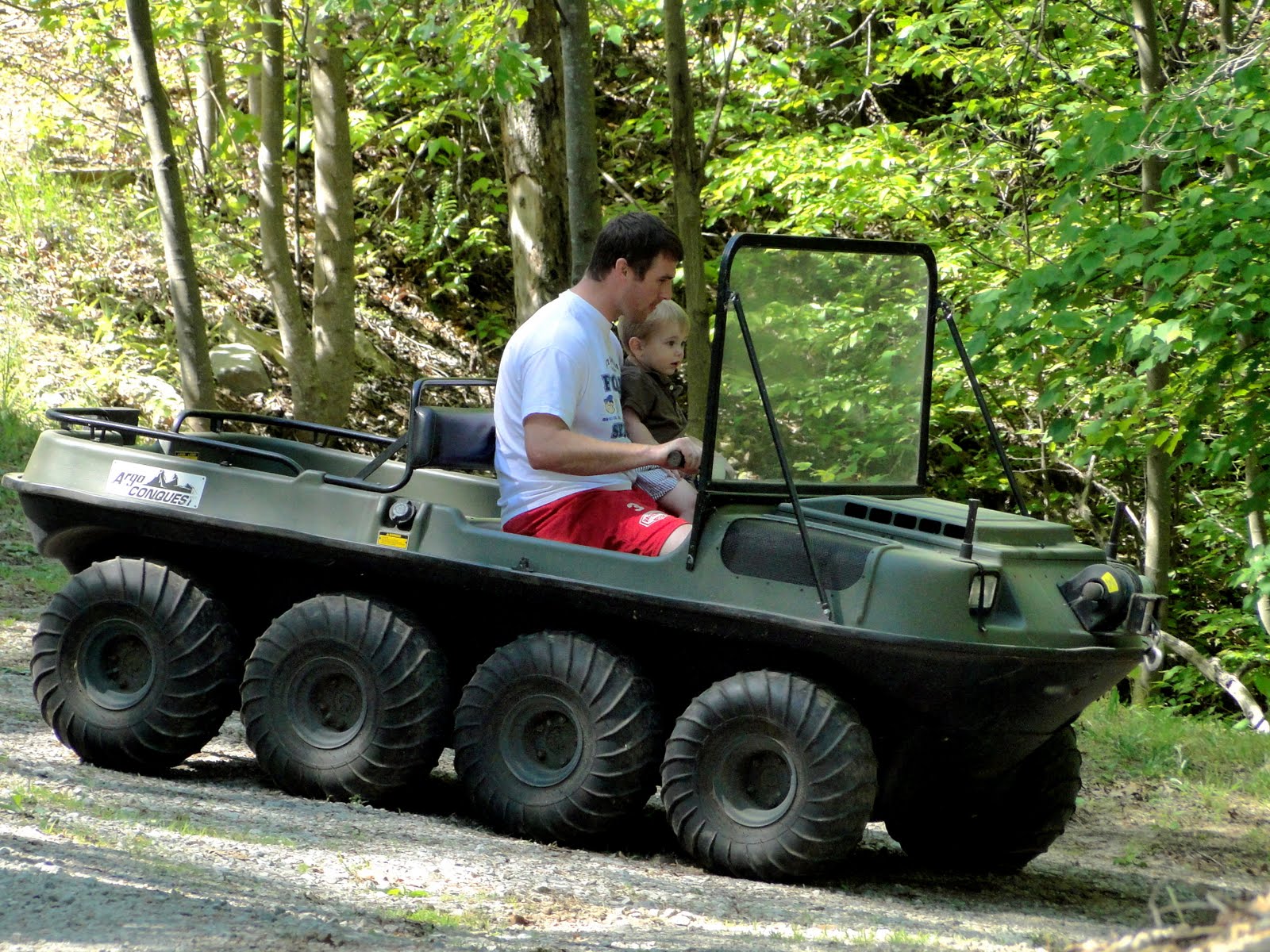 Kye’s favorite thing at Granpa’s and Grammie’s is the jukebox. He will stand there and push all the buttons forever. He also loves watching the cds shuffle and dancing to the Elvis songs. 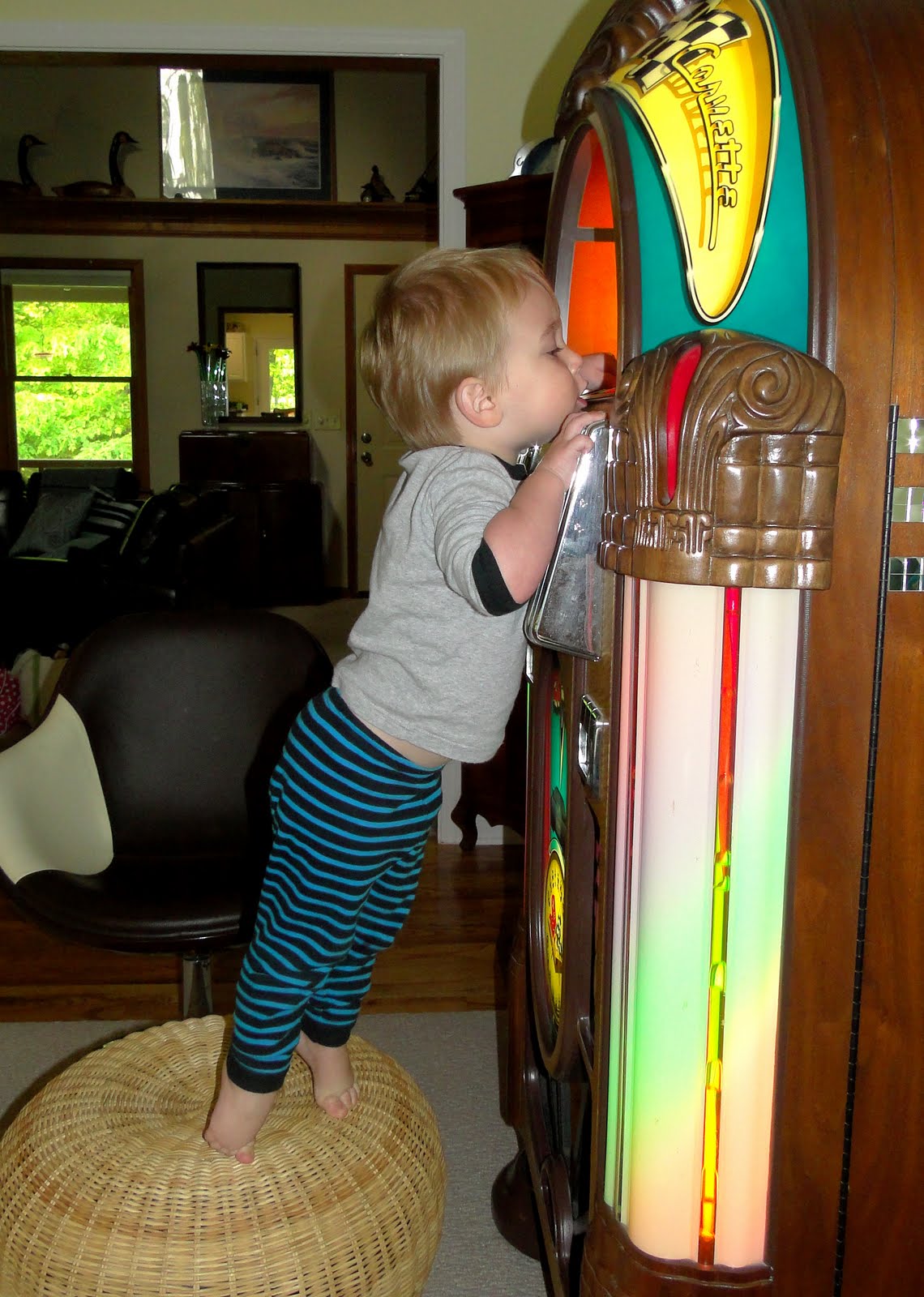 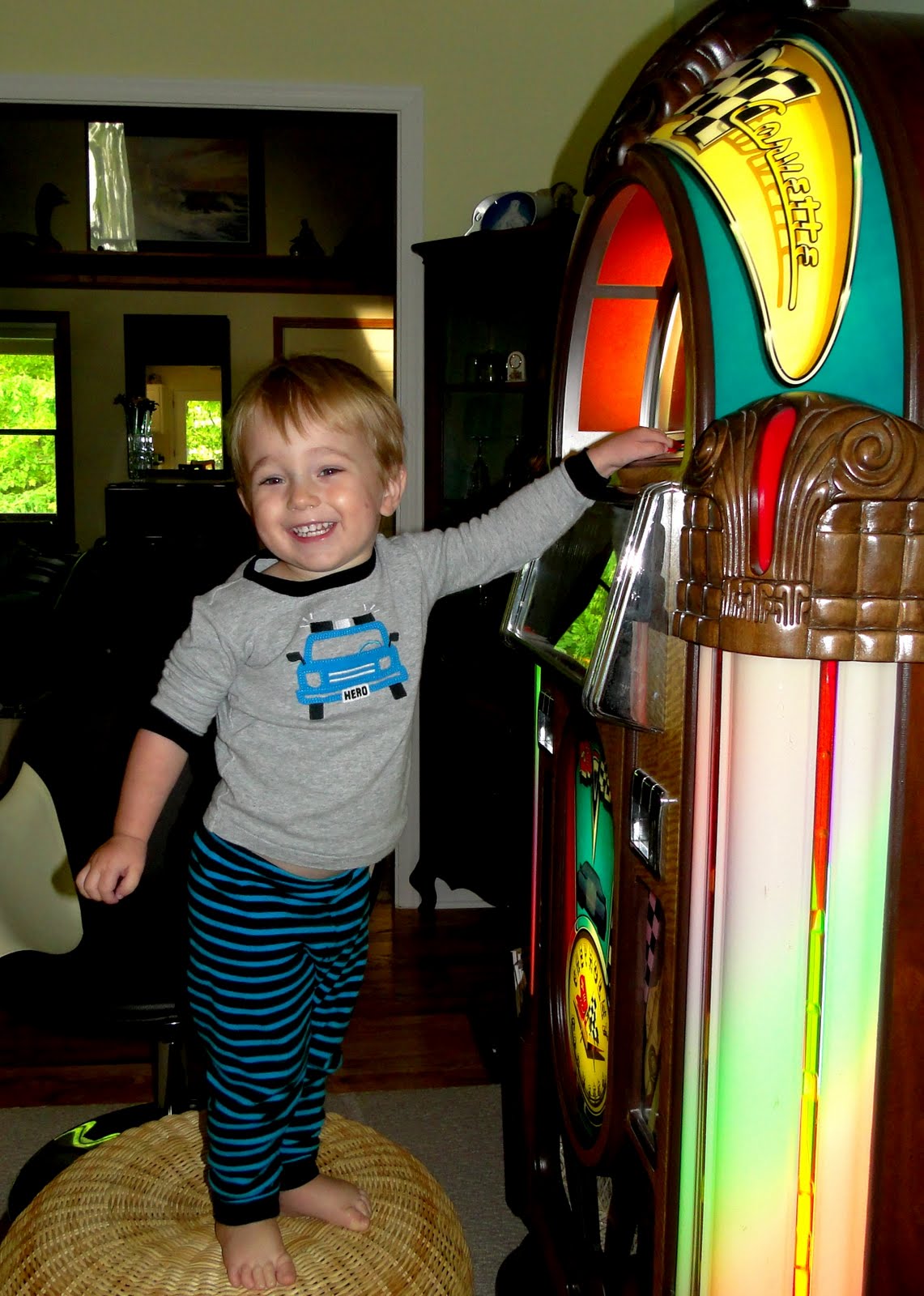 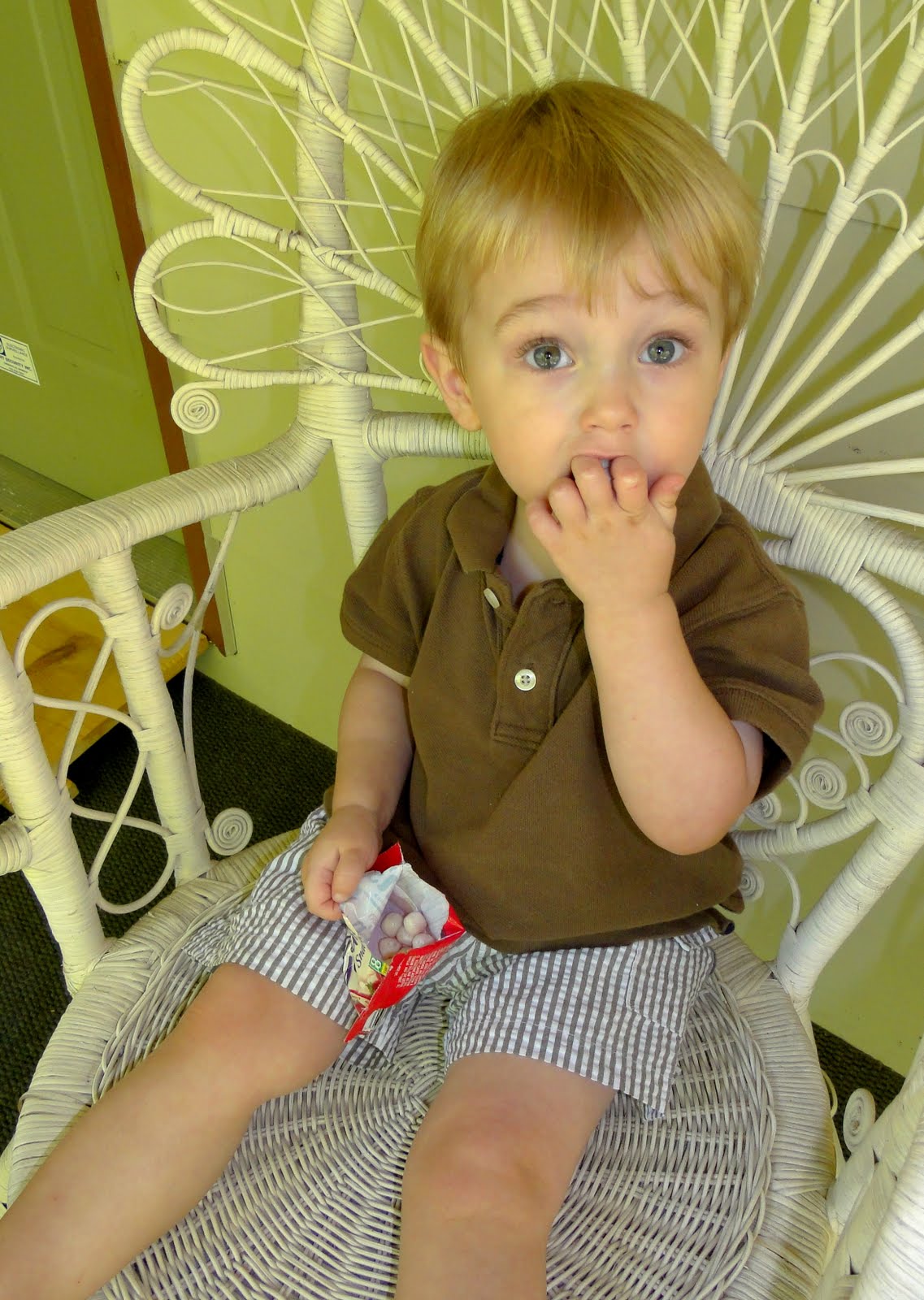 Taylor and Jordy’s wedding was in downtown Lawrenceville so we left plenty early to make sure we’d be on time. I wrote down some basic instructions and set up a movie before we hit the road. It cracked me up saying bye to everyone…this is grandparent babysitting at it’s finest…pop in a movie, give him some snacks and relax 😉 Haha! 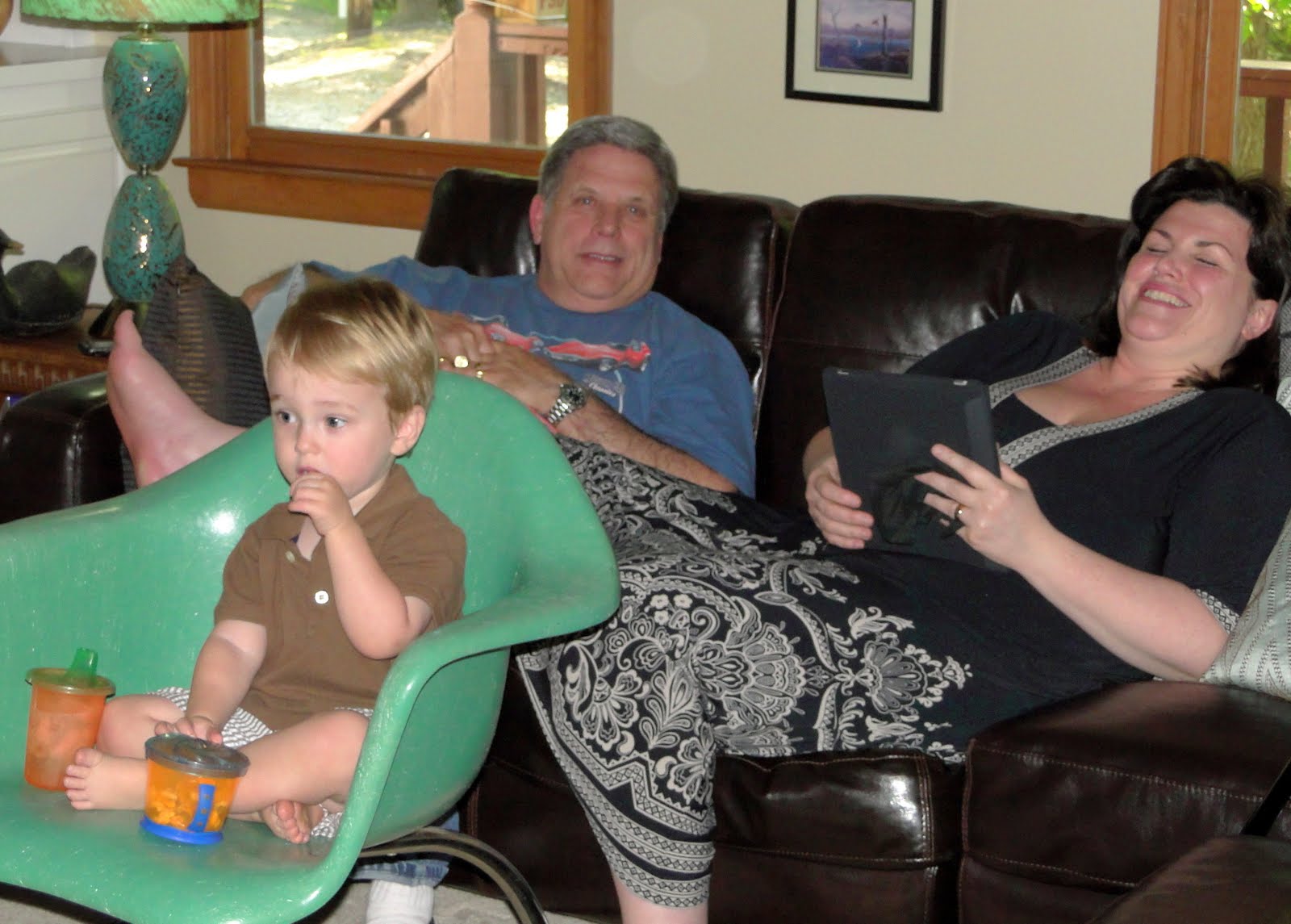 Taylor and Jordy have been dating forever. I can barely remember a time that they weren’t together (although I do remember in middle school everyone forcing Taylor and Kenny Rowley to “go out” since they both had red hair…I think I have a picture of them together somewhere even haha). It was SO wonderful to see Taylor walk down the aisle to the man she’s always loved. You don’t get to see weddings like that very often and it was very moving for me. I LOVED that Jordy cried. To me, my favorite part of any wedding is when the groom cries. I just love it! It’s so sweet to see a man so in love and so wrapped up in the moment, ya know?

I also really enjoyed the ceremony. The man that married them also married her parents and did awesome. Probably the best “sermon” at a wedding ceremony ever because he was straight up about it. He didn’t sugar coat marriage and make it sound all fluffy with constant rainbows and smiley faces. He talked about the hardships, that it takes work, that it takes commitment and even his prayers were prayers for them to tough it out when it gets tough and put in the time and effort it takes to have a successful marriage. As a married woman myself, I really appreciated that because SO many people enter into marriage thinking one thing but then find out it’s not as easy as they expected and are disappointed.

The reception was off Sugarloaf Parkway and it was a GREAT time! Zach and I had a BLAST hanging out with Danielle, Jonathan, Claire and Dan. It was only my second time meeting Dan (and Zach’s first) and we both really like him. It was also Zach’s first chance to really get to talk to Jonathan and he liked him a lot too. It made me SO happy that he likes two of my favorite friends husbands (well Dan is Claire’s husband now but then he was her fiancee)! It’s so important for everyone to like each other in a couple situation ya know? And duh, I’ll be friends with Claire and Danielle no matter what – but Zach liking their hubbies (and I think they liked him too!?) makes it even better 🙂

Danielle, Me and Claire! 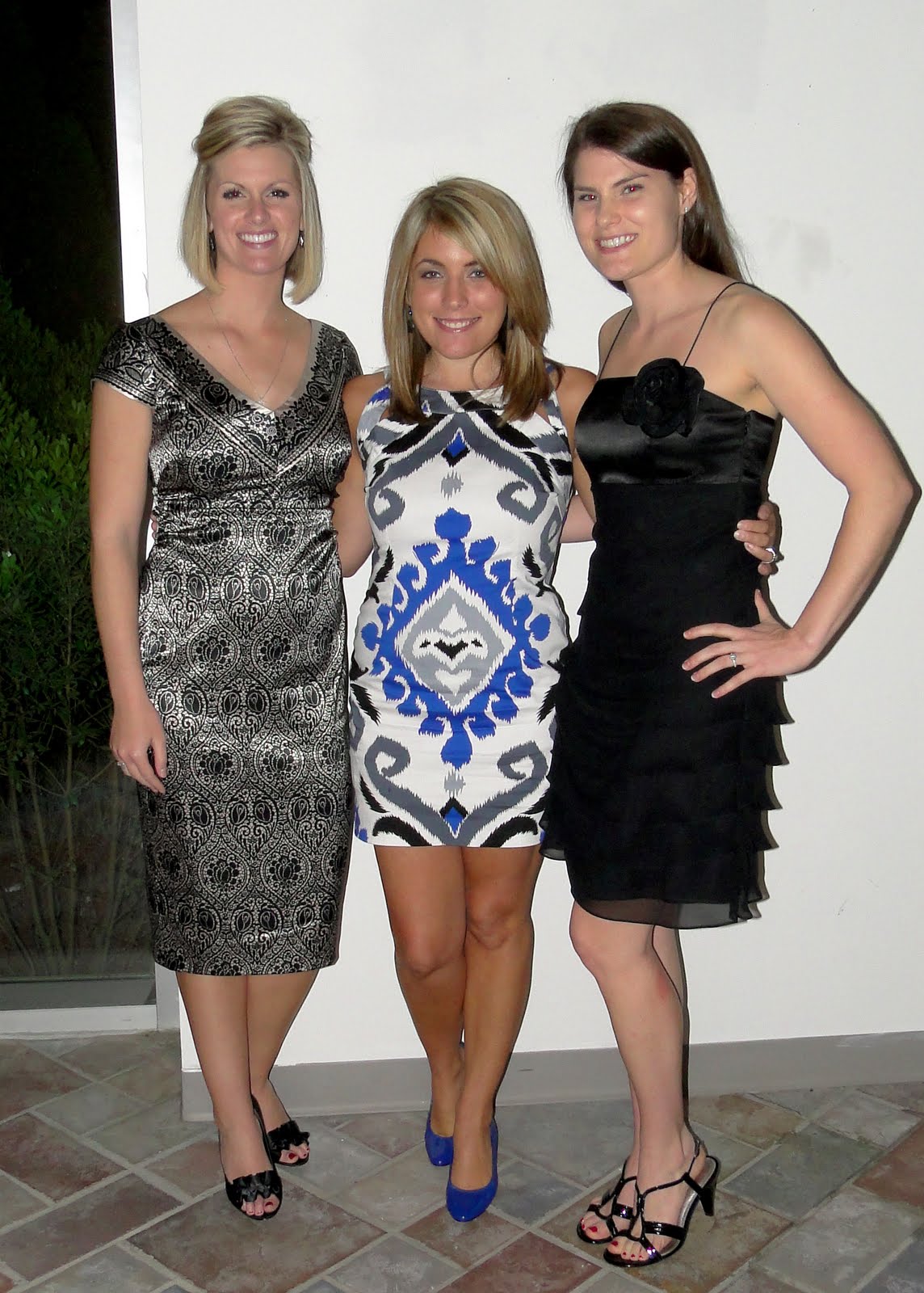 (and yes, I loved my dress from Easter 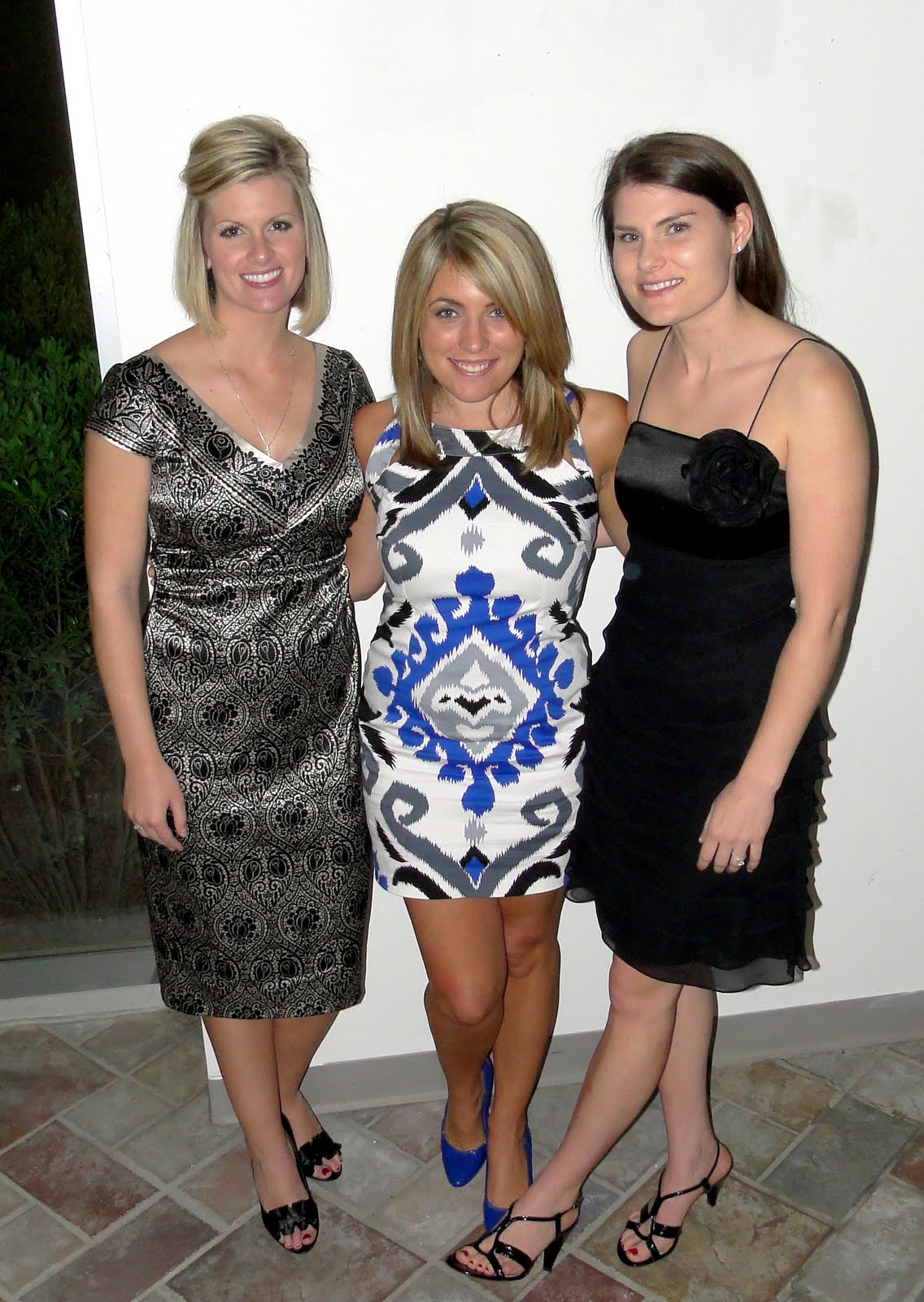 The guys! Dan, Zach and Jonathan (you know him from Danielle’s blog as “Big Jon” but I personally can’t say if the nickname fits or not so I’ll stick with Jonathan haha) 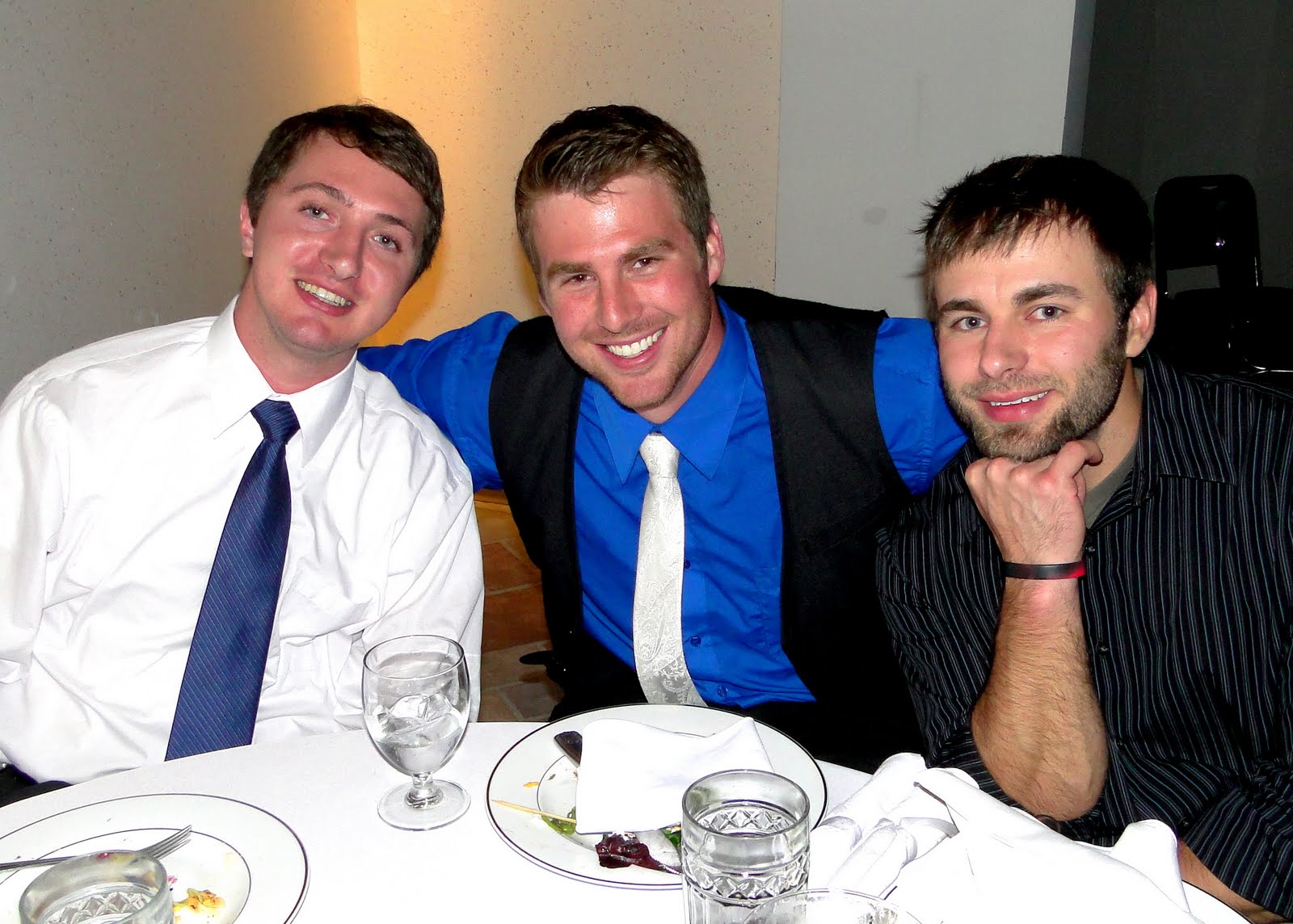 We couldn’t get them to be serious 🙂 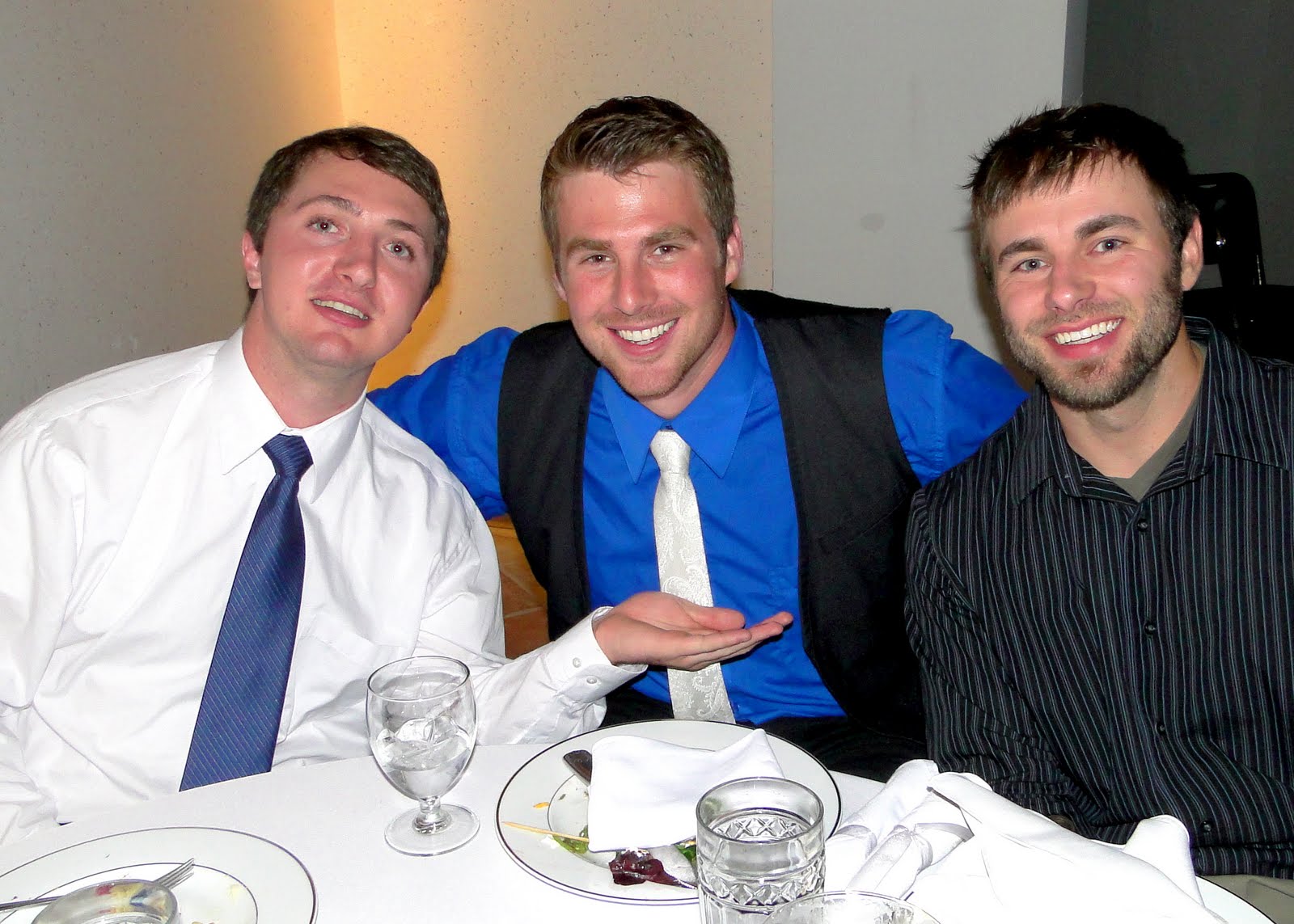 We all had a fun time getting to know each other better and catch up on each others lives. I also learned that I am bad luck at weddings…at Danielle’s wedding I tripped UP the stairs in front of everyone, and at Taylor’s I made an idiot of myself. They had awesome food stations and to save time I thought I’d help Zach out and grab us both a martini glass of mashed potatoes. I balanced my glass on my plate and had Zach’s in my hand and realized he’d totally want extras in his glass so I leaned in to ask for a little more and BAM. My glass busted all over the floor. It was one of those moments that the whole room stops and everyone felt the need to go “Ohhhhhhhh.” (One of those people happened to be my husband from across the room haha). I don’t embarrass too bad so I just held the other glass in the air, curtsied and moved on. The ANNOYING part of it is when I took Zach his mashed potatoes he didn’t even want them! He insisted on getting his own (massive) helping. All that for nothing!

Danielle was feeling mega sick and I was pretty exhausted so we didn’t stay too late into the evening, but made sure to give Taylor big congratulations hugs before we left! Zach captured this little gem of Taylor and Claire haha! 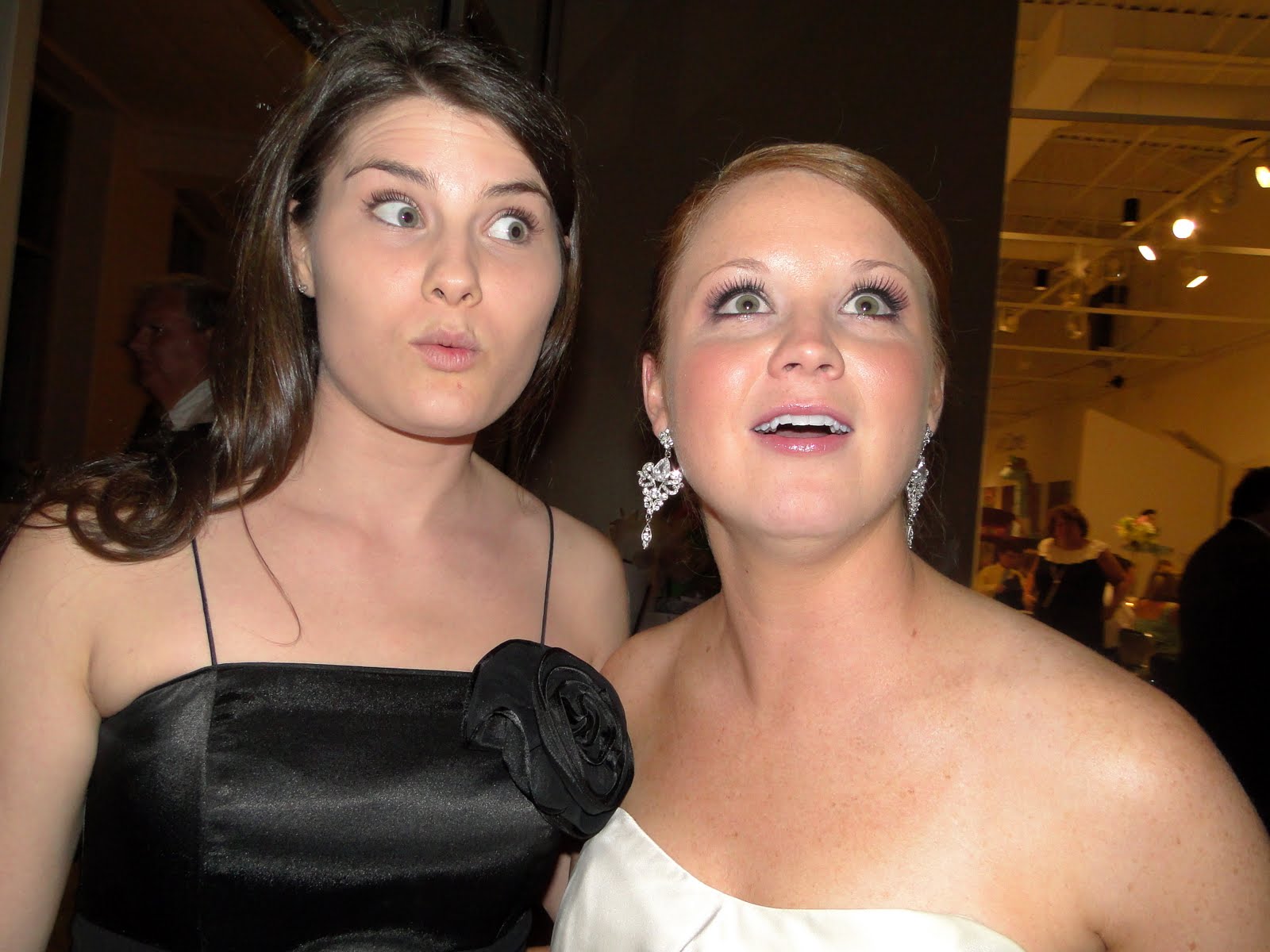 Taylor looked STUNNING! I loved her makeup, loved how much her earrings shined (even during the ceremony you could see their sparkle) and loved seeing her SO happy. You could tell she was enjoying every second of being a bride. Have I ever mentioned I miss that feeling? 😉 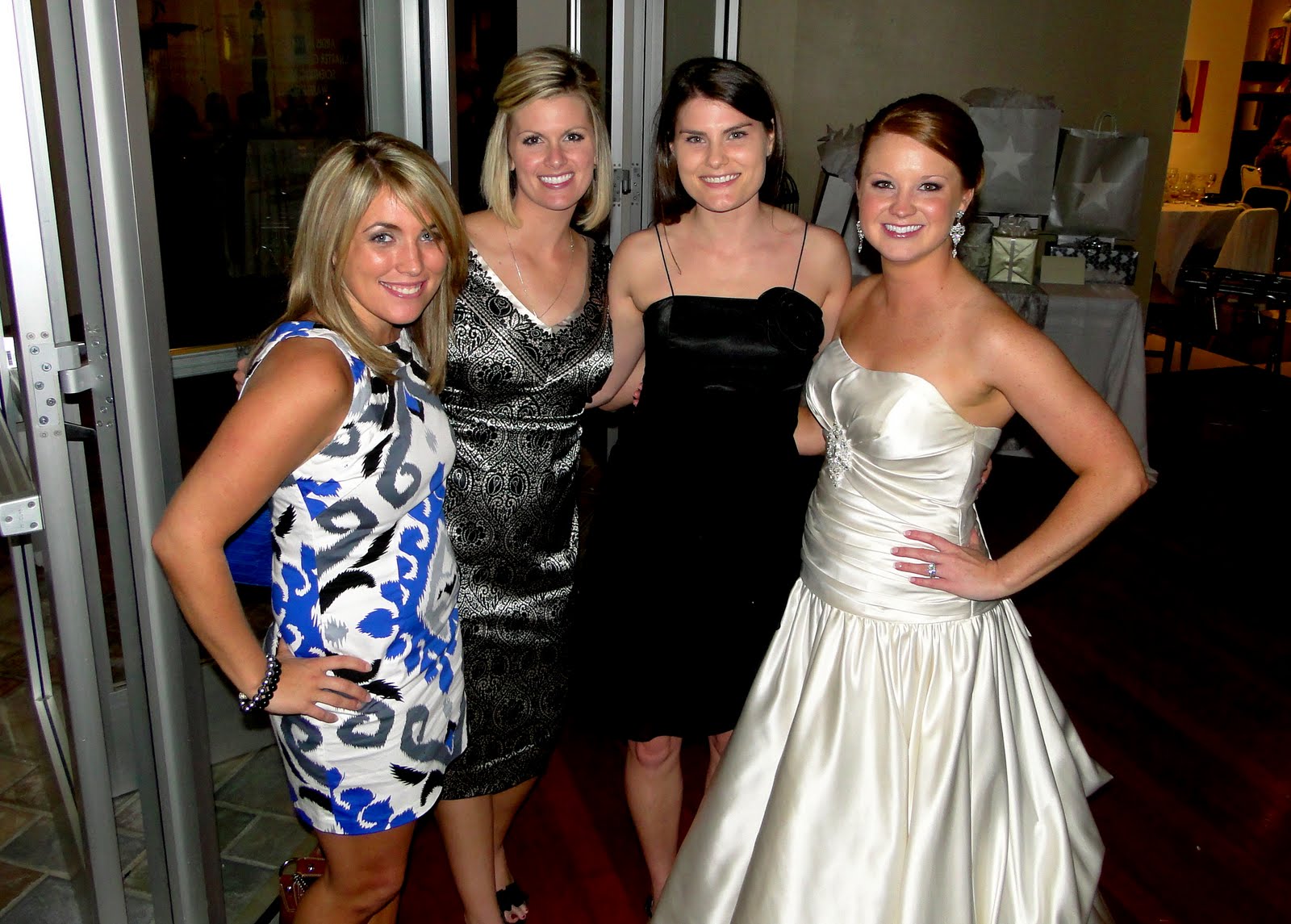 The next day we waited until after Kye’s nap to head back home. It put him a little late for bed but we’d rather him be a little late at night and get a full nap then go to bed on time with no nap ya know? We stopped through McDonald’s for dinner and Kye had his very first Happy Meal! We all know I’m not a fast food fan but Zach and I agreed early on that we’d always do fast food on the road, it’s easier for us and makes it a special treat for the kids. I was pleasantly surprised by McDonalds. I LOVE that they have the classic boxes still, the toys were pretty cool, and the food was decent for him. Chicken nuggets were only like 110 calories for 4 of them and they gave him apple slices (which he devoured) instead of fries and they had 2% milk. 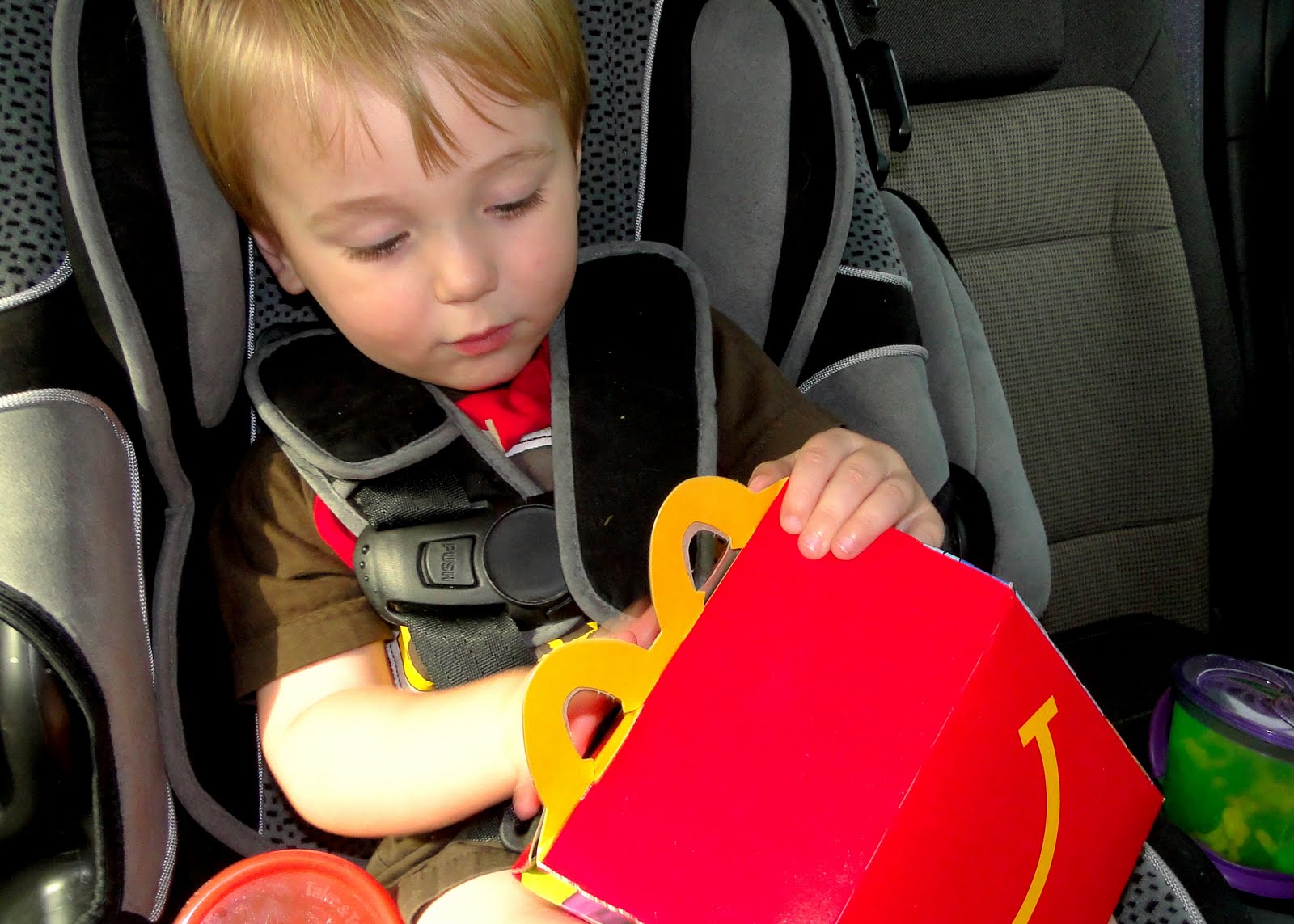 Also on the way home we made one stop…and it’s kinda random. I saw on Melissa’s blog (who seriously needs to get back to blogging!!!) these cool letters and totally want to do them for Kye’s room. She said she got them at Joann’s and since we don’t have one here, I had to stop while we were in town. I’m glad Zach was okay with it 🙂 Sadly they didn’t have the HUGE letters she had (which would have been awesome) but they had some that will work and I’ve just decided to put them in a different spot in his room.

While I was hunting the aisles I saw this random girl coming towards me doing some strange walk and I thought to myself “what the heck is up with this chick?” Then I realized it was RACHAEL!!! When you’re in a random place you don’t expect to run into people you know (especially not GOOD friends!). I mean I’m from Lawrenceville so you’d think I’d run into people all the time but I NEVER do until recently. Last time I went up for a girl’s trip Danielle and I ran into Taylor and this trip I saw Rachael! I hated that we had to rush to hit the road (and that Kye was being bratty for her first time meeting him) but it was WONDERFUL to get to give her a big hug 🙂 It was also wonderful to get to ask her what in the world has happened to the Gwinnett Place Mall area…every sign we saw was in some oriental language and we saw TONS of oriental people everywhere. So random? I guess it’s a big Korean hot spot now! How things change!!!

So glad Rach is always thinking “blog” as she made sure we got a pic together!

Seeing her made me want to hang out SOOOOOOOON!!!! 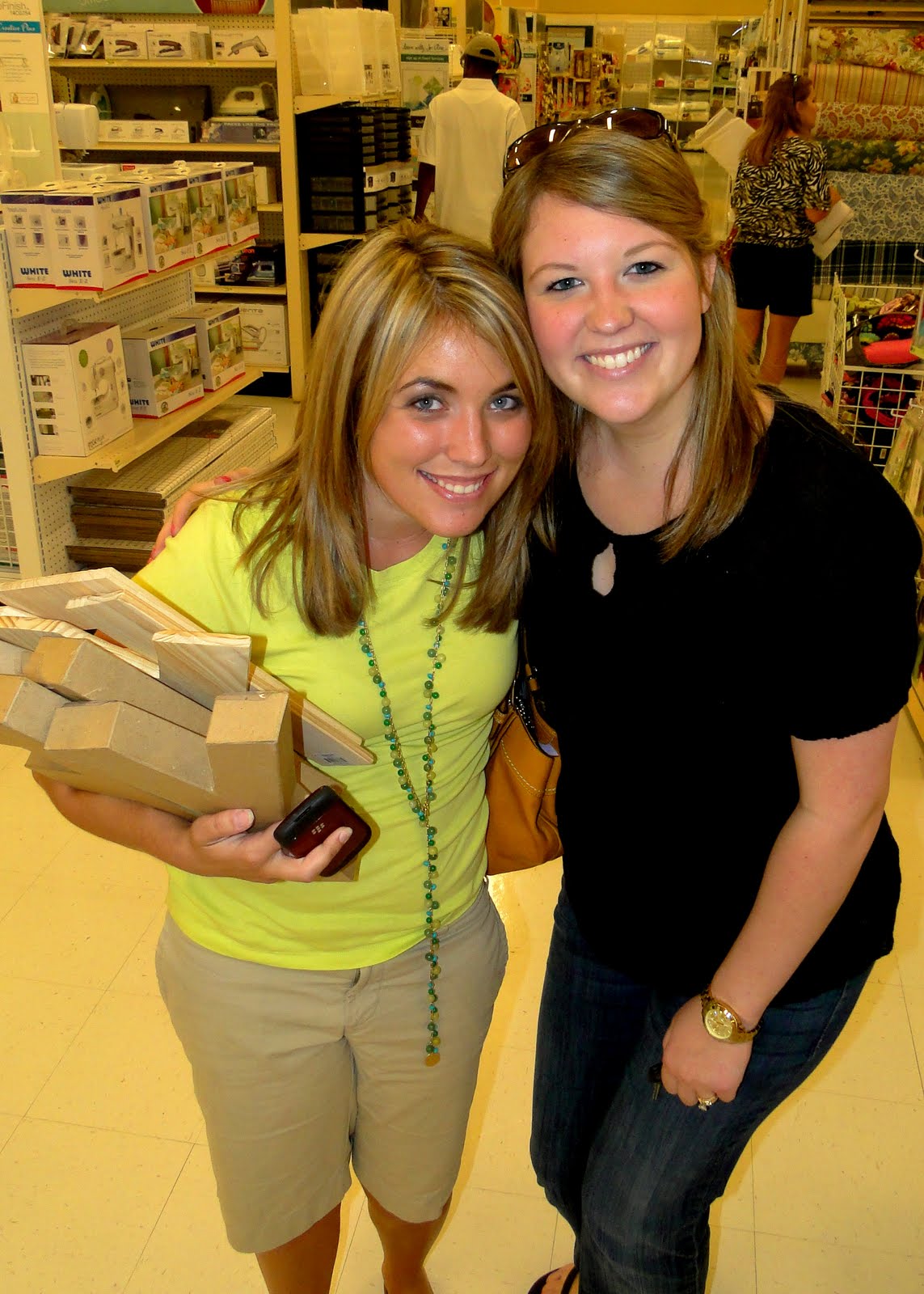 Overall it was a very successful weekend! Zach and I enjoyed time with Dad and Audrey, had a BLAST at the wedding (Seriously Zach still says how fun it was! He really likes my friends!), and got to see Rachael 🙂