Tess’s 13th week of life was from Thursday Oct 23rd through Wednesday October 29th. She was 12 weeks old during this week.

Nursing: Bottle was a BIG issue on our beach trip. She simply refused. We realized she’d drink just enough to be satisfied (like 2 oz) and then quit. It was very, very difficult and frustrating for me. But it also forced me to figure out how to nurse her in situations where I typically wouldn’t. I nursed her on the beach and in the car this week with ease! I am not anti-nursing in public…it’s just not something I’m personally comfortable doing so for me to do these things was a big deal!

I am SO THANKFUL for my blog! I’m always glad to hear when it helps others…but I’m especially excited when it’s helpful for me and this week it really was. With the bottle issues I went back and realized that BOTH Kye and Britt struggled with the bottle at this age! I think it must be a common thing? Of course they didn’t straight up reject it like she did but they did struggle. It gave me hope that it’s a situation that will improve!

I tried to give Tess a bottle while at home alone when kids were at school and she did the same thing where she just completely refused it. I ended up putting her down and waiting a few minutes then nursed her because I couldn’t handle her being so upset and didn’t want to battle with it. Mrs. Charlotte was so sweet and went to the store and bought us a ton of bottles to try! I’ve heard that a different bottle can make a big difference so I was ready to try anything and everything we could!

She had a couple times this week where she was fussy at the breast. Sometimes in the evenings for her 8:00 feeding we could NOT get her to calm down and eat. She was crying so SO hard that both Zach and I got concerned about it! It’s not like her to reject nursing and it did worry me but I think it was due to her having a lot of sleep issues and just being overly tired?

Nursing got a lot quicker this week. Often she’ll only take 15-20 min for her whole feeding. I also stopped using the Milkies this week while nursing as I wasn’t getting as much in them anymore and it was just a pain to pour them into the bottles and clean them and store it all and everything!

A big goal for this week was to start extending her awake time lengths. Her naps were junky (much more on a that in a second) so I first tried making awake time shorter. When that didn’t work, I decided to extend awake time. Why not just keep her awake which makes the naps shorter? I extended awake time length to one hour and 15 minutes during this week and it worked out well for her!

Sleep: Ugh. Prior to Hawaii she was a pretty great sleeper. After Hawaii? Whole new ball game. We entered the third wonder week and I’m sure that had a lot to do with it. I also think Tess started having 4 month old sleep regression issues early.

Tess did NOT sleep well on our beach trip. We quickly realized the bassinet we were using for her was just too small. She was touching the sides of it and it would cause her to wake. We also were trying out the woombie swaddle and soon regretted that. Her ability to move her arms caused issues for her as well. And we were also dealing with trying to get her back able to self soothe after being held too long while we were in Hawaii. Part of our prepare for sleep ritual involved holding her for a few minutes prior to putting her in the crib for sleep. While we were gone she was held too long and not put down sleepy but awake and this resulted in her not being able to self soothe anymore to get herself to sleep at the starts of naps.

So we had a good bit of issues we were dealing with!!! Tess started having both nap issues as well as middle of the night wakings. With naps she woke 45 minutes into each nap. On the dot! She truly had the “45 minute intruder” and it was like clockwork. Nights were not at a set time but were very random and all over the place. Some nights she’d wake at 3 am, some at 5 am, some not at all. There was no real pattern to it which makes it much more difficult to trouble shoot!

While we were at the beach we knew there wasn’t much we could do with the sleep issues. We held her to sleep a LOT to just be able to get through the trip and then I knew once we got home I’d be looking at a good while of hardcore sleep training!

Once home my first change was to stop holding her at all prior to sleep times. We swaddle, sing, turn off the lights, turn on the fan, and then just kiss her and lay her down full awake. This worked well and she would fall asleep very quickly at the start of naps. Having her fall asleep at the start of sleep time has never been a big issue for Tess!

However, that 45 min intruder was (IS!) a BEAST! I took pages and pages of notes. I wrote down every little detail of every nap. I’m not going to bore you all with those details. Basically she woke every single nap exactly at the 45 min marker. And nothing I did from then on would help her get back to sleep. I tried doing cry it out for 15-20 min and then I’d go in and hold her to calm her down and then put her back down and let her cry again. Basically with that approach all that happened was she ended up only getting a 45 min nap and spent the rest of the nap crying!

I’ve never been a big fan of the swing. Kye was a paci baby and I used that when he struggled with sleep. Britt responded super well to cry it out and would only fuss for a few minutes before going back to sleep on her own. With Tess I decided to start trying the swing. She would just CRY and CRY and wouldn’t stop so cry it out wasn’t working! I started to leave her swaddled and move her to the swing to finish naps (she’d wake at 45 min then I’d let her fuss for 15-20 min to give her the chance to fall back to sleep on her own, then I’d move her to swing if she didn’t fall back to sleep during that time). Once she fell back to sleep I’d turn off the swing but just leave her there to finish the nap. It wasn’t an ideal solution but my hope was, with time, she’d stop waking at 45 min and, therefore, stop needing the swing at all. 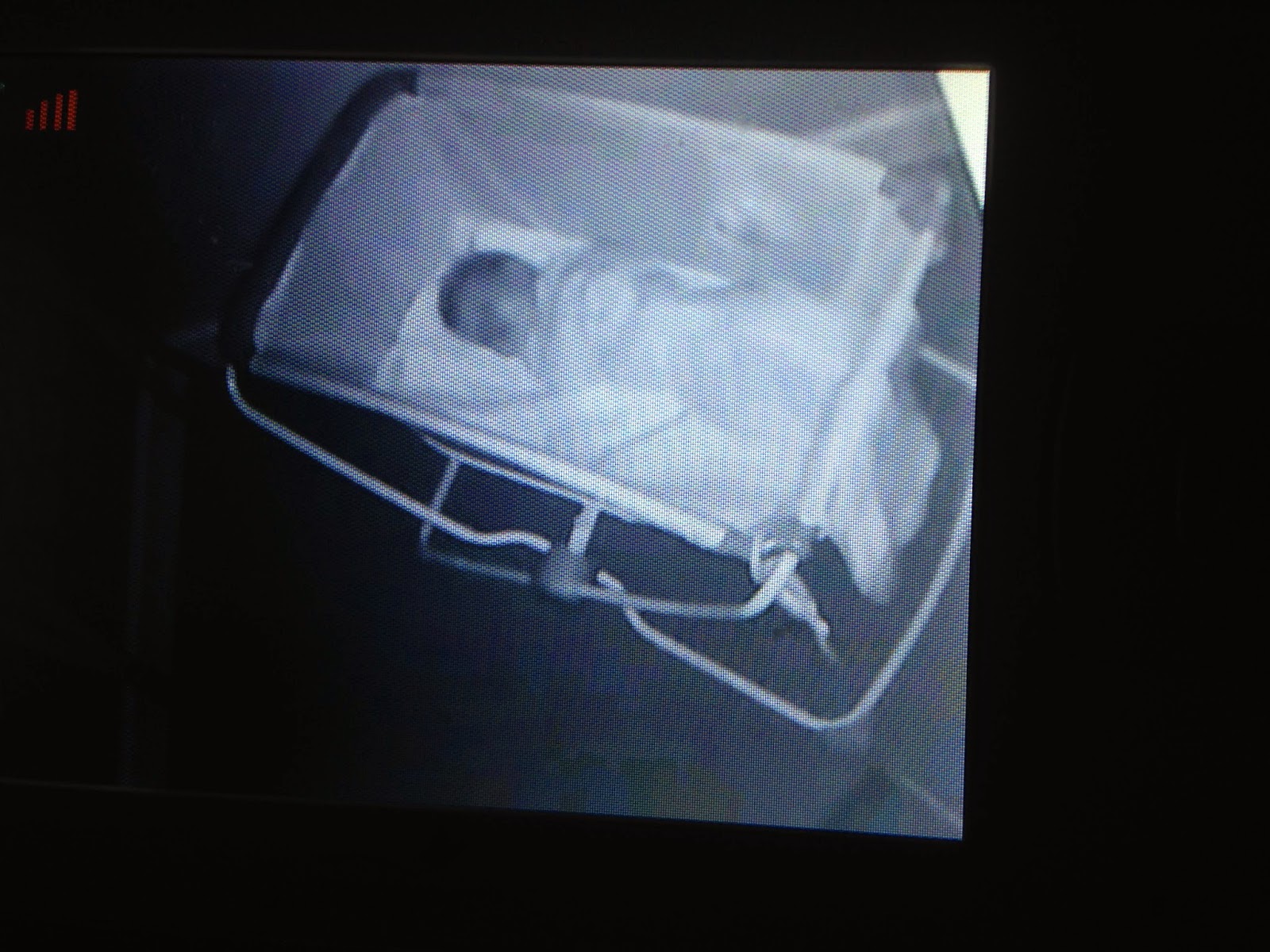 Swing for end of nap 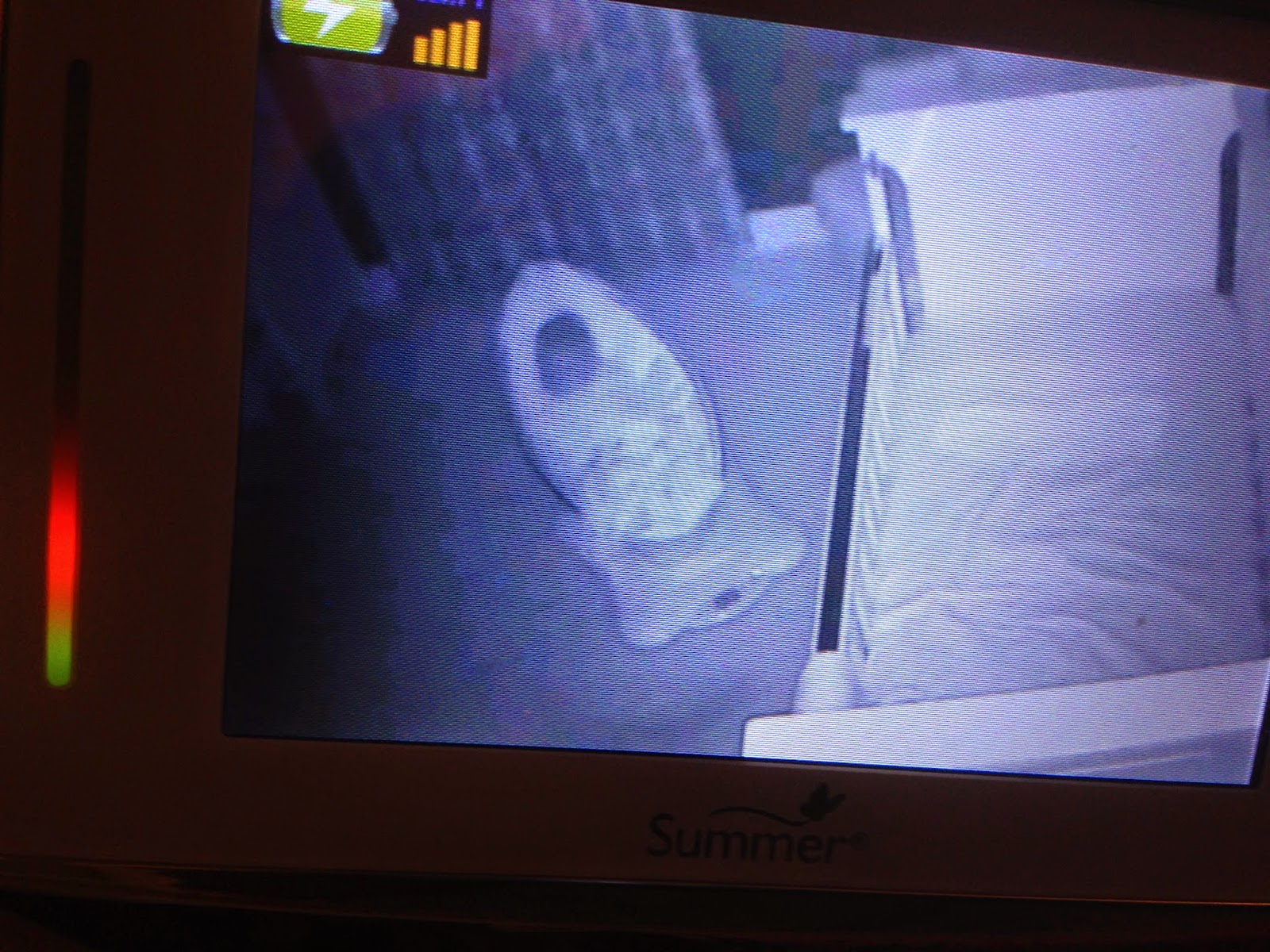 in the car seat works AMAZING! she slept awesome during our driving times on the trip! 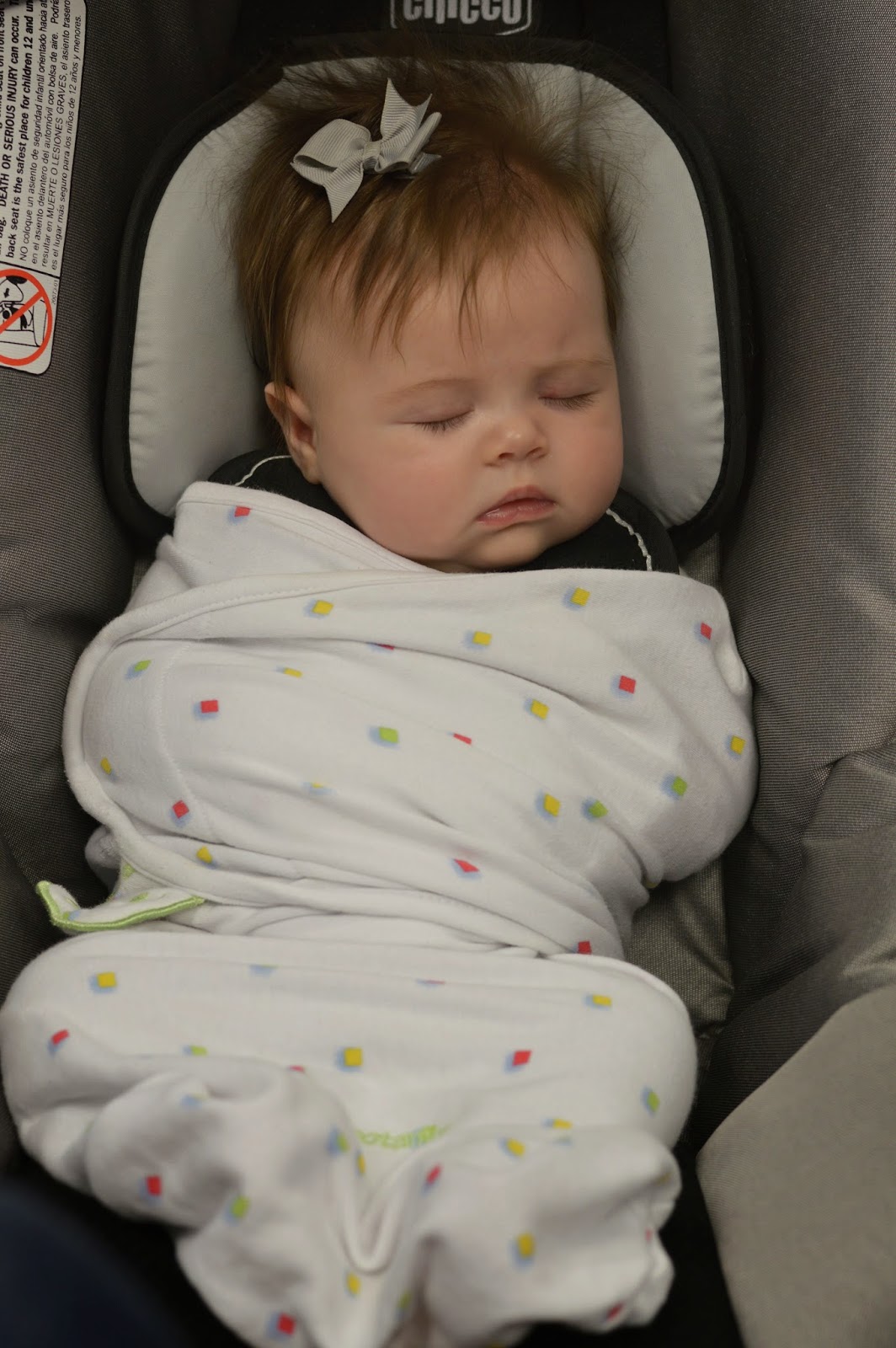 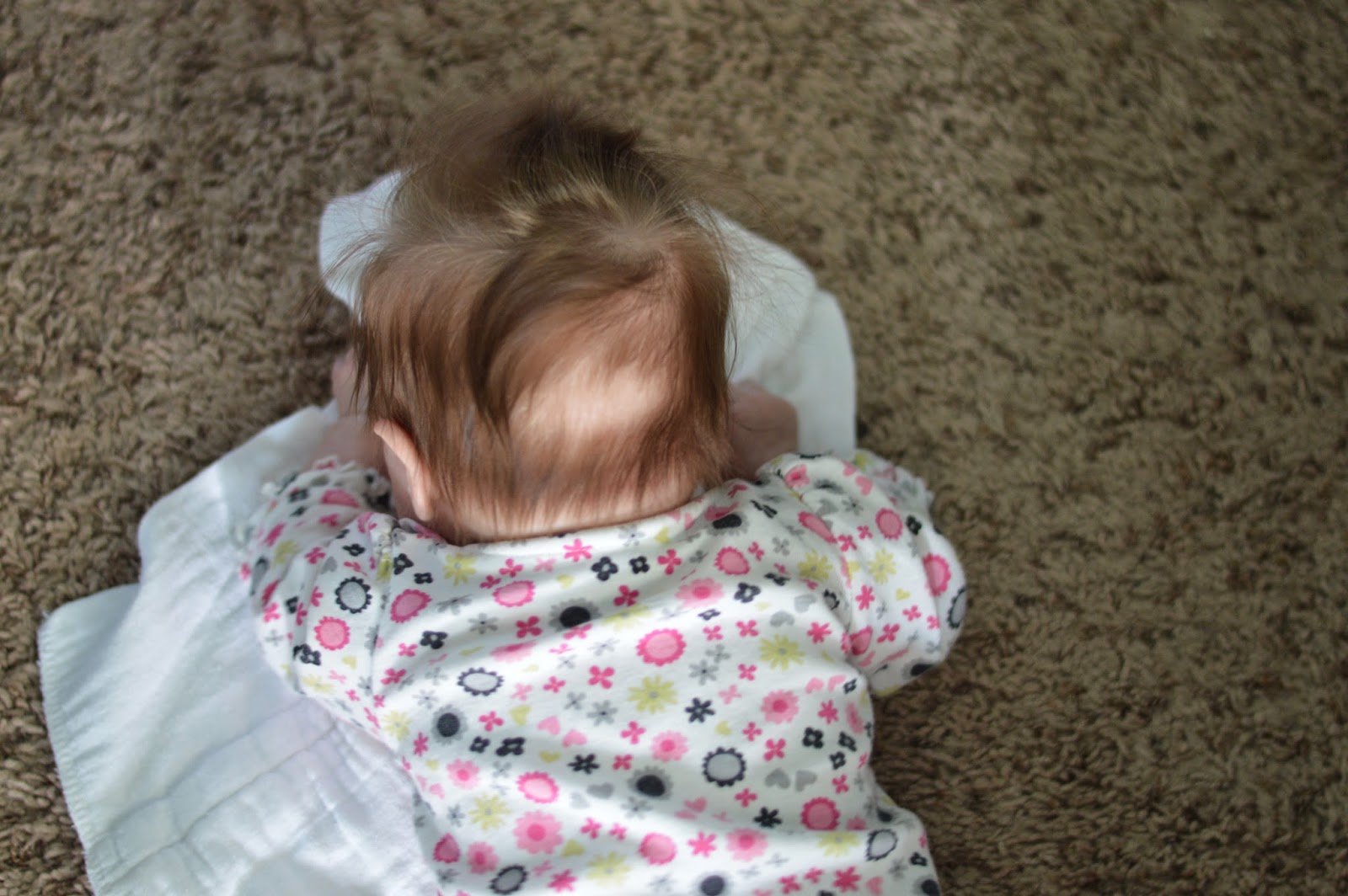 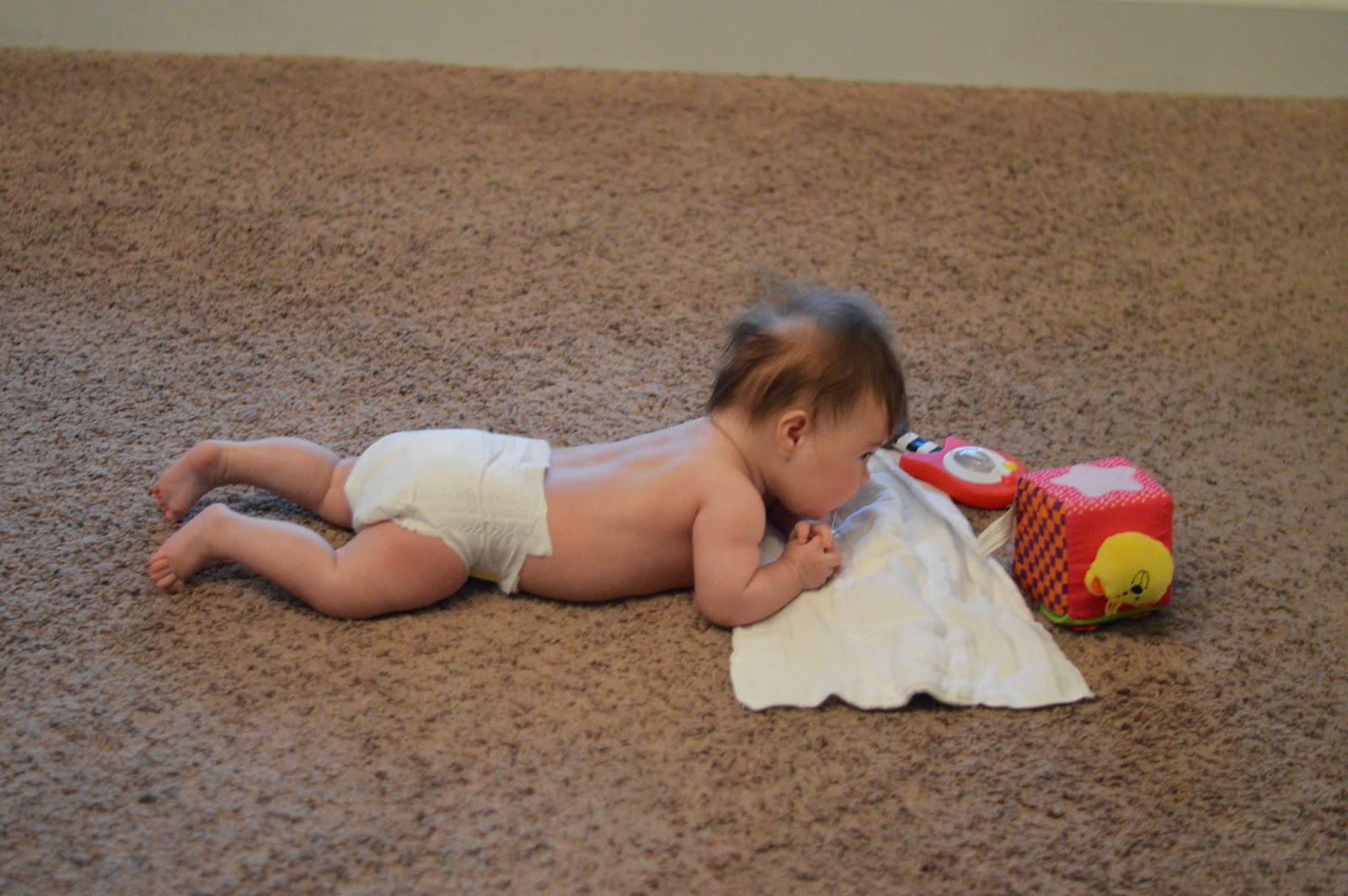 Daddy took her upstairs to play in the play room 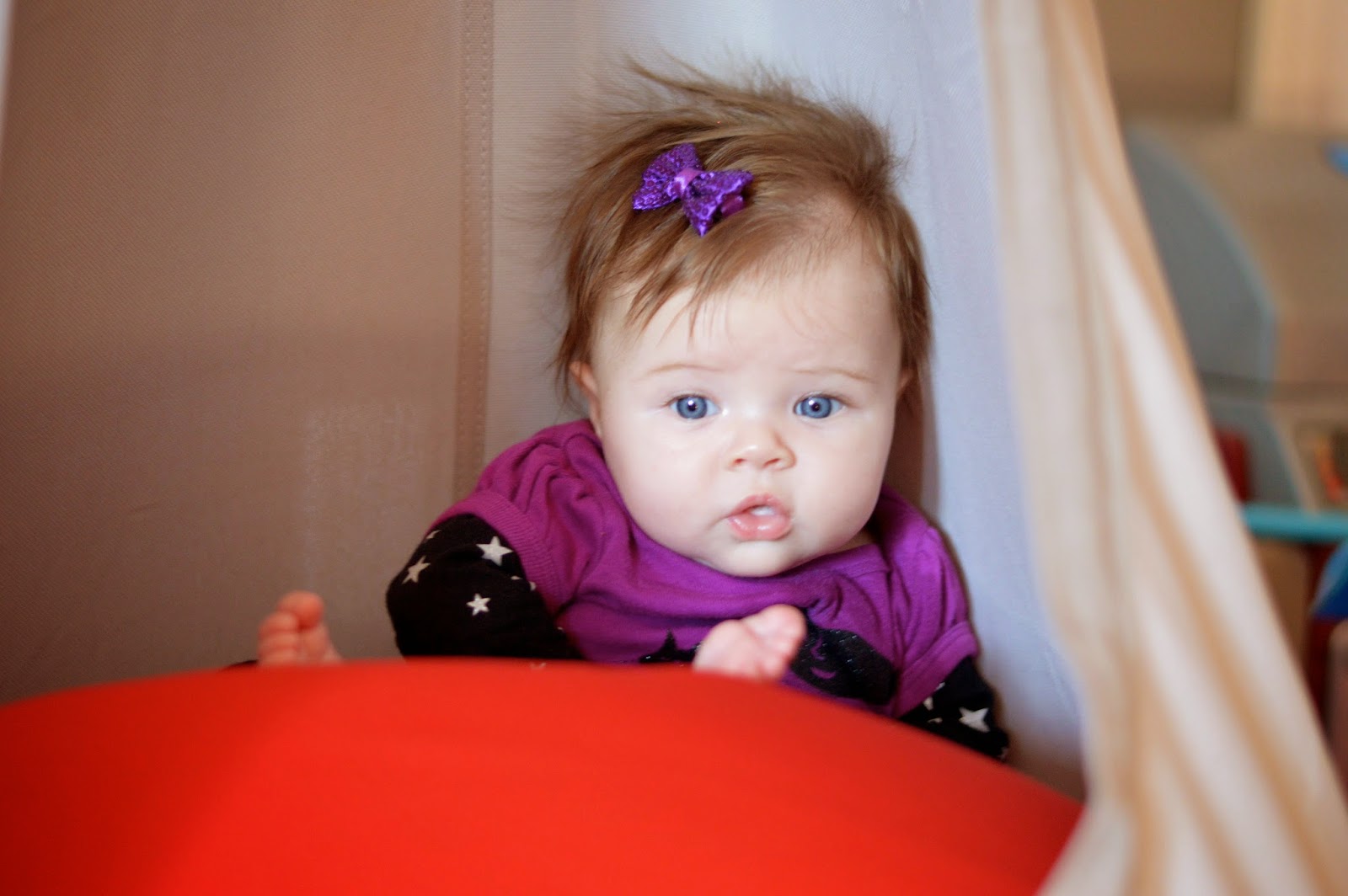 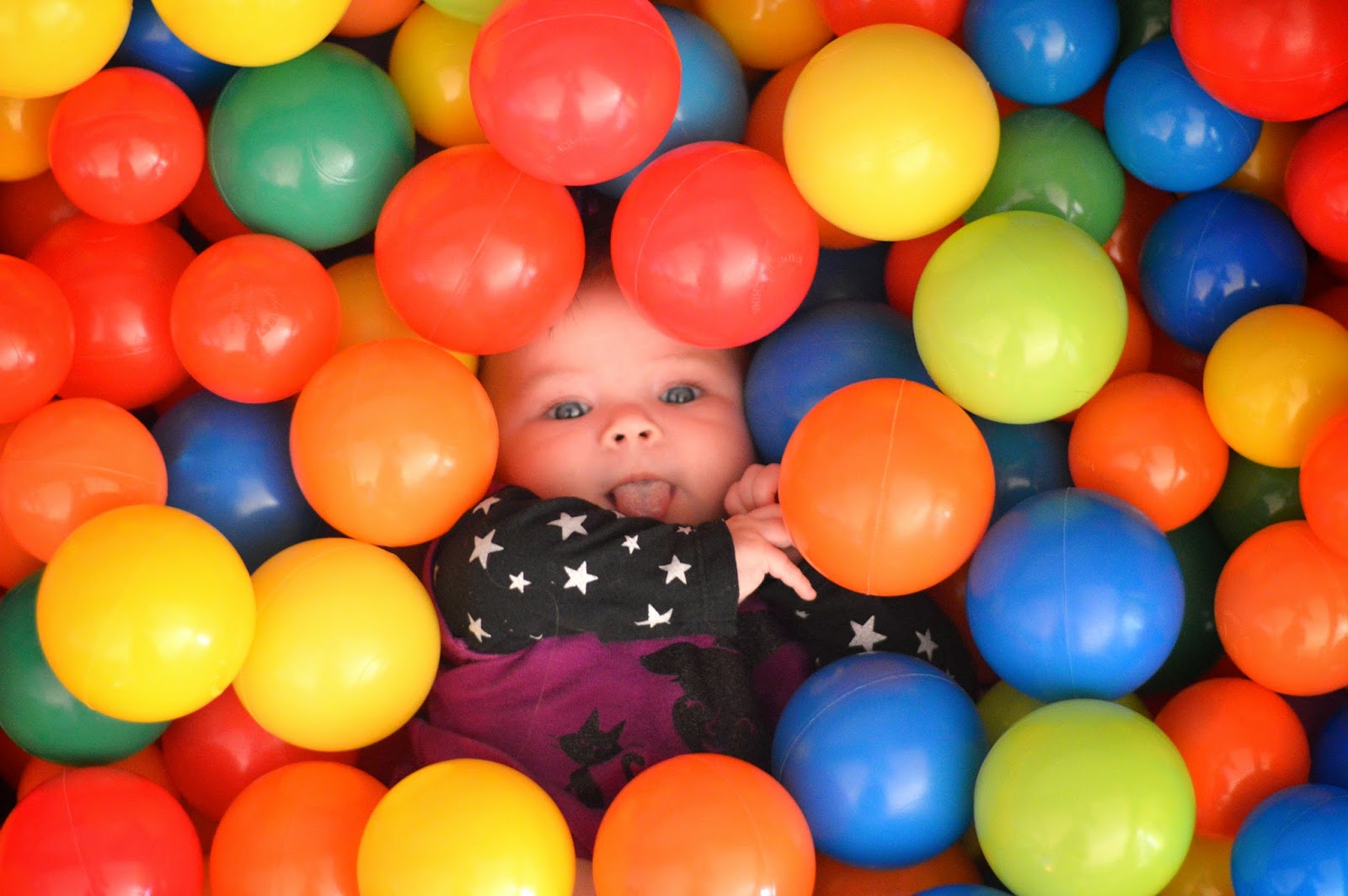 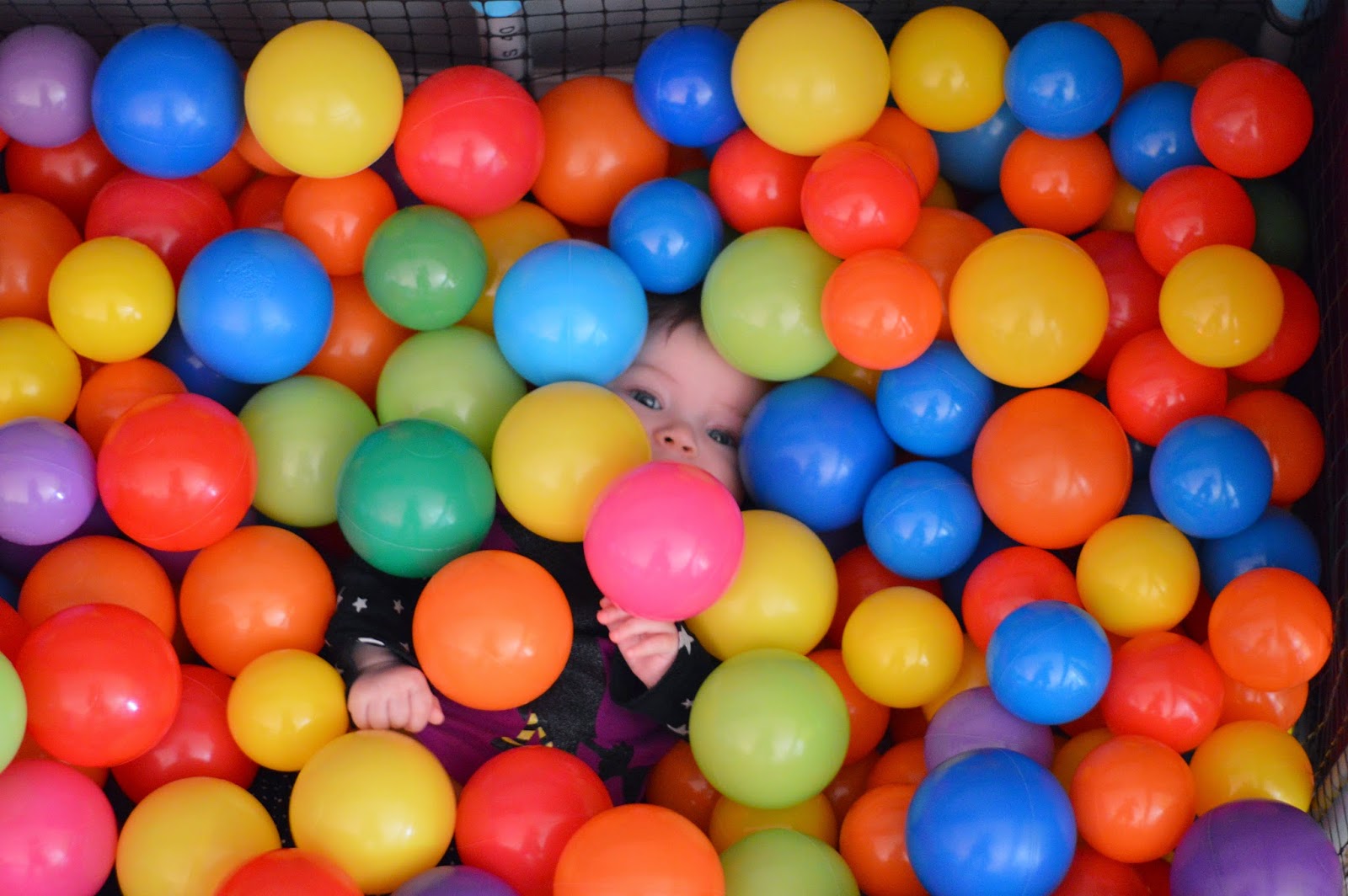 talking to her toys 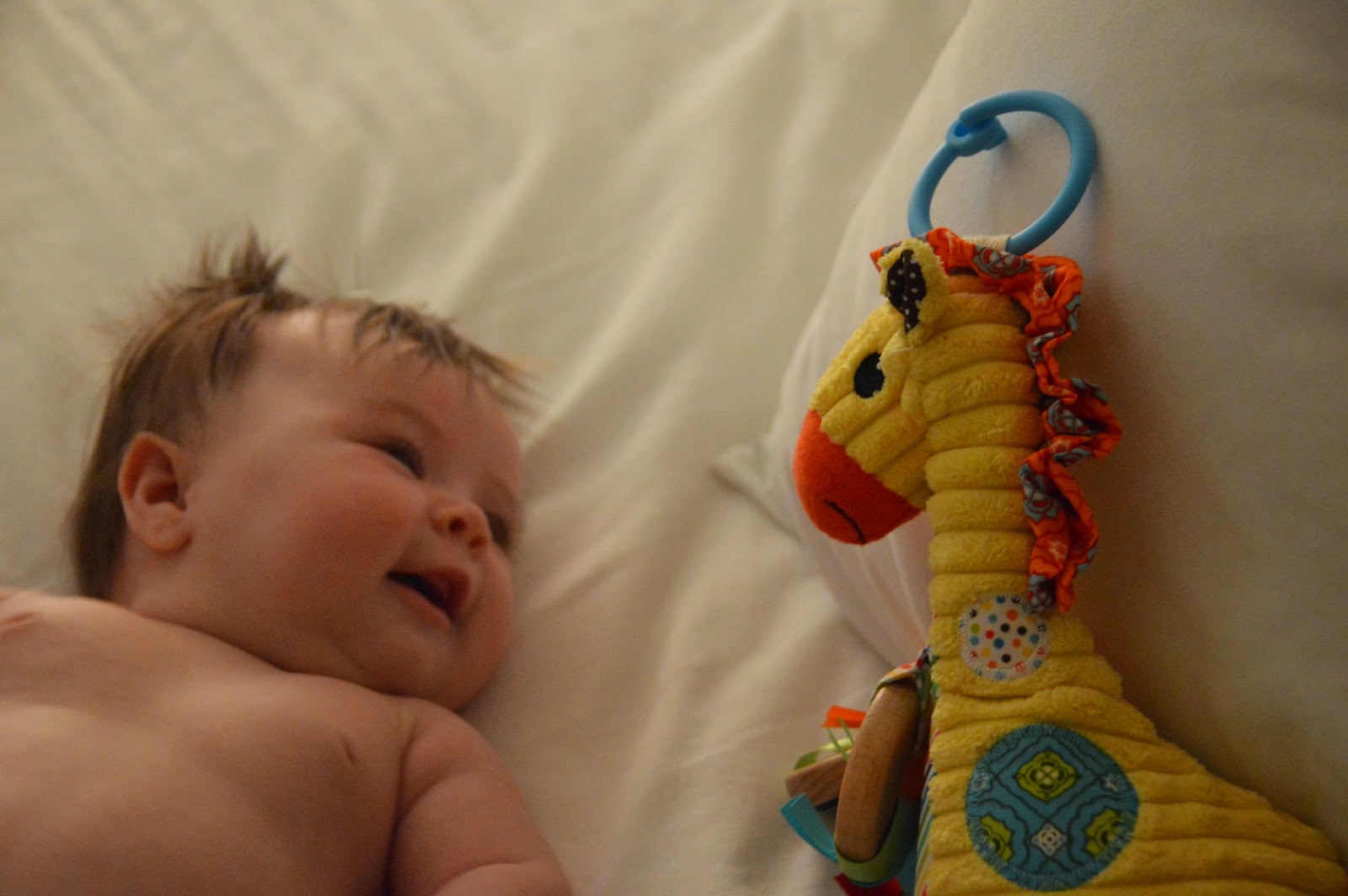 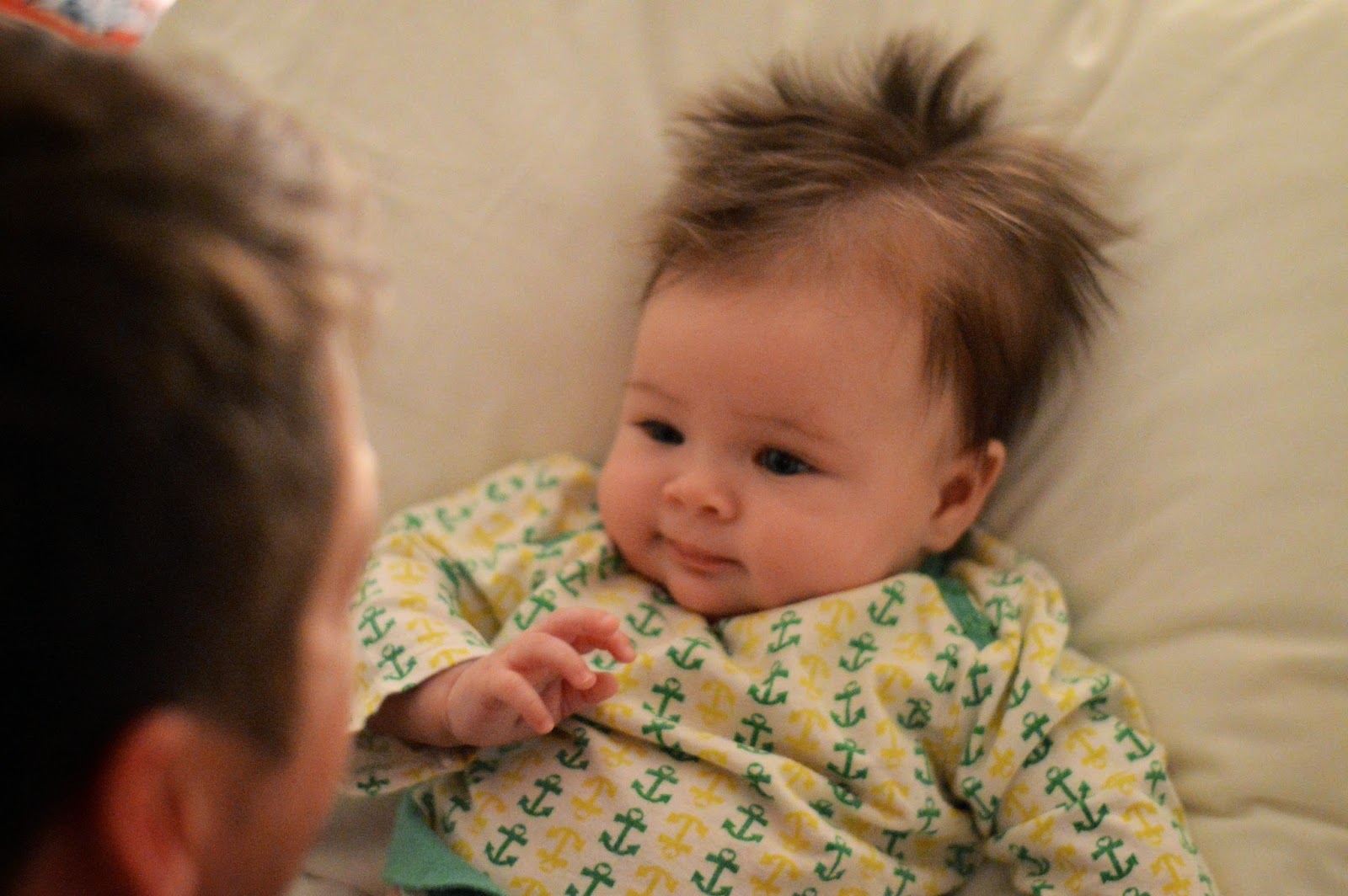 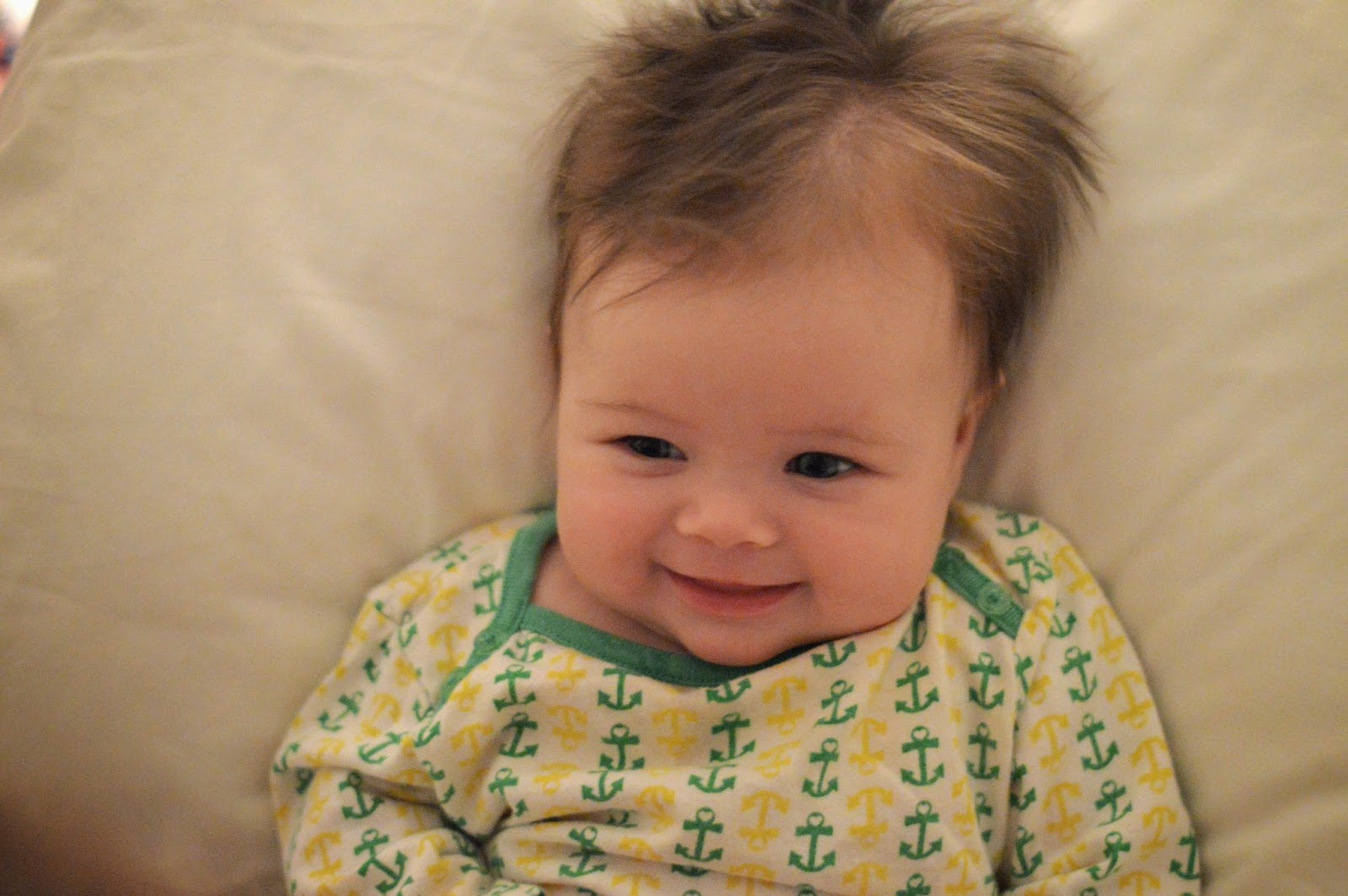 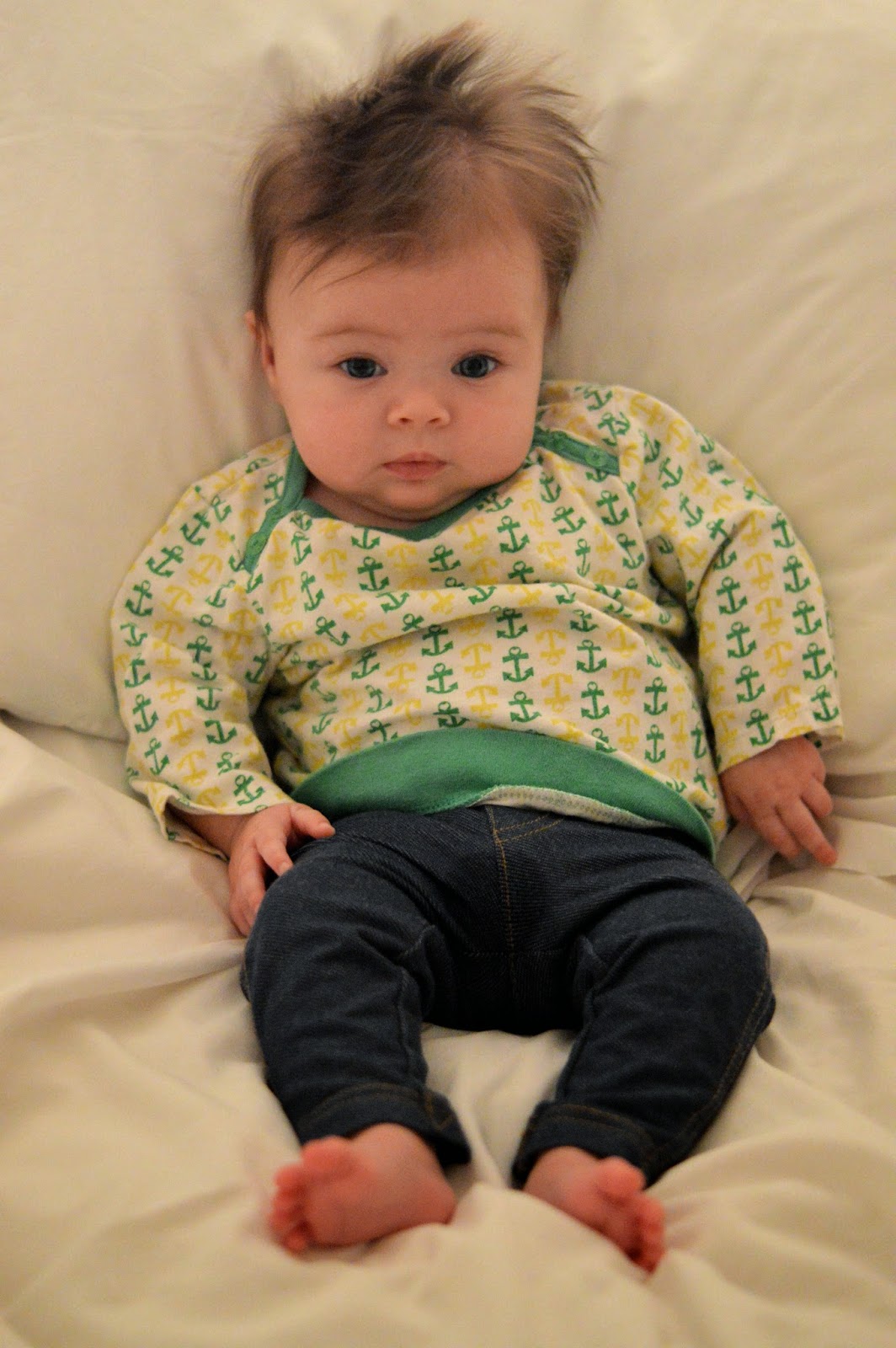 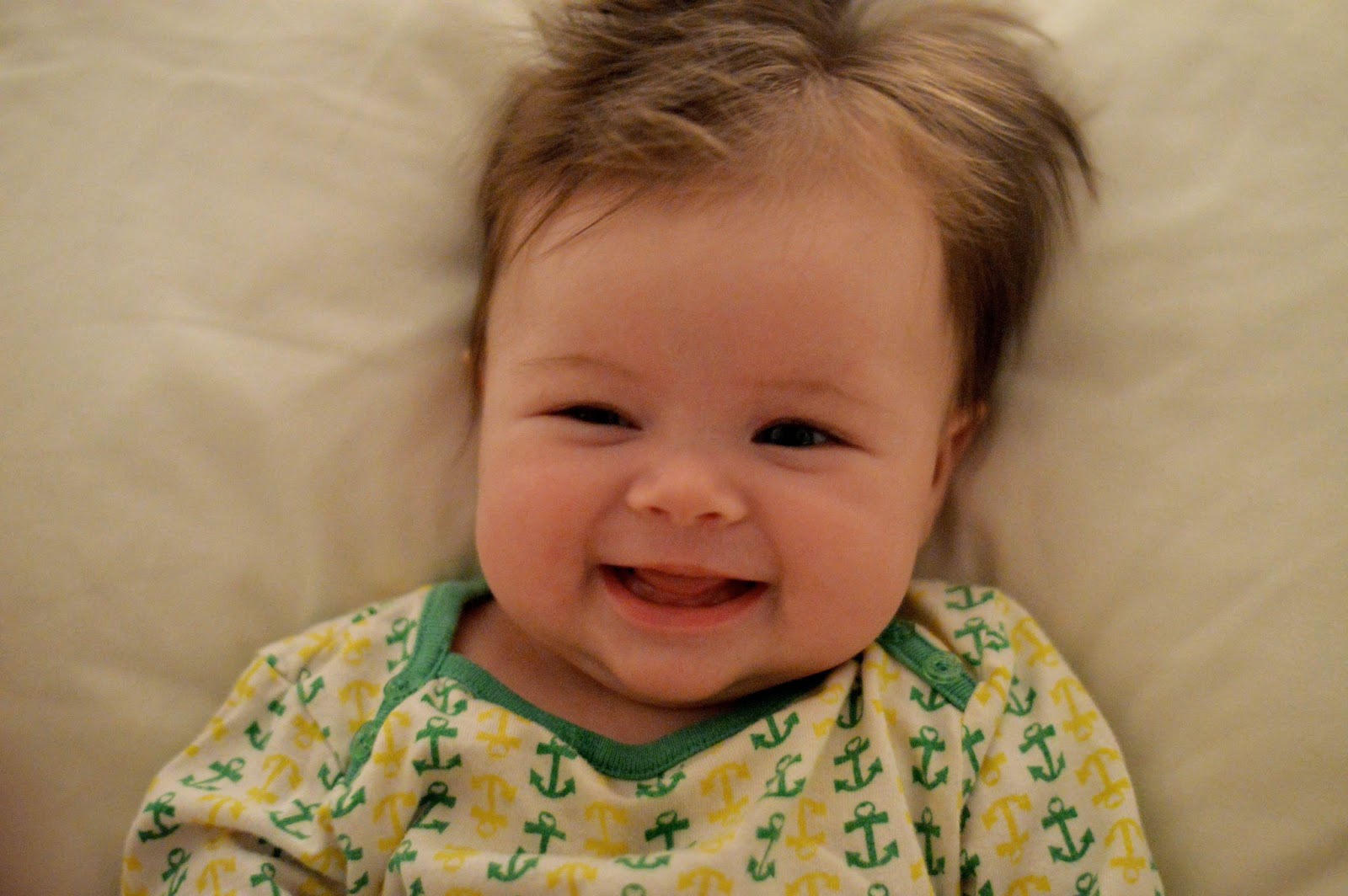 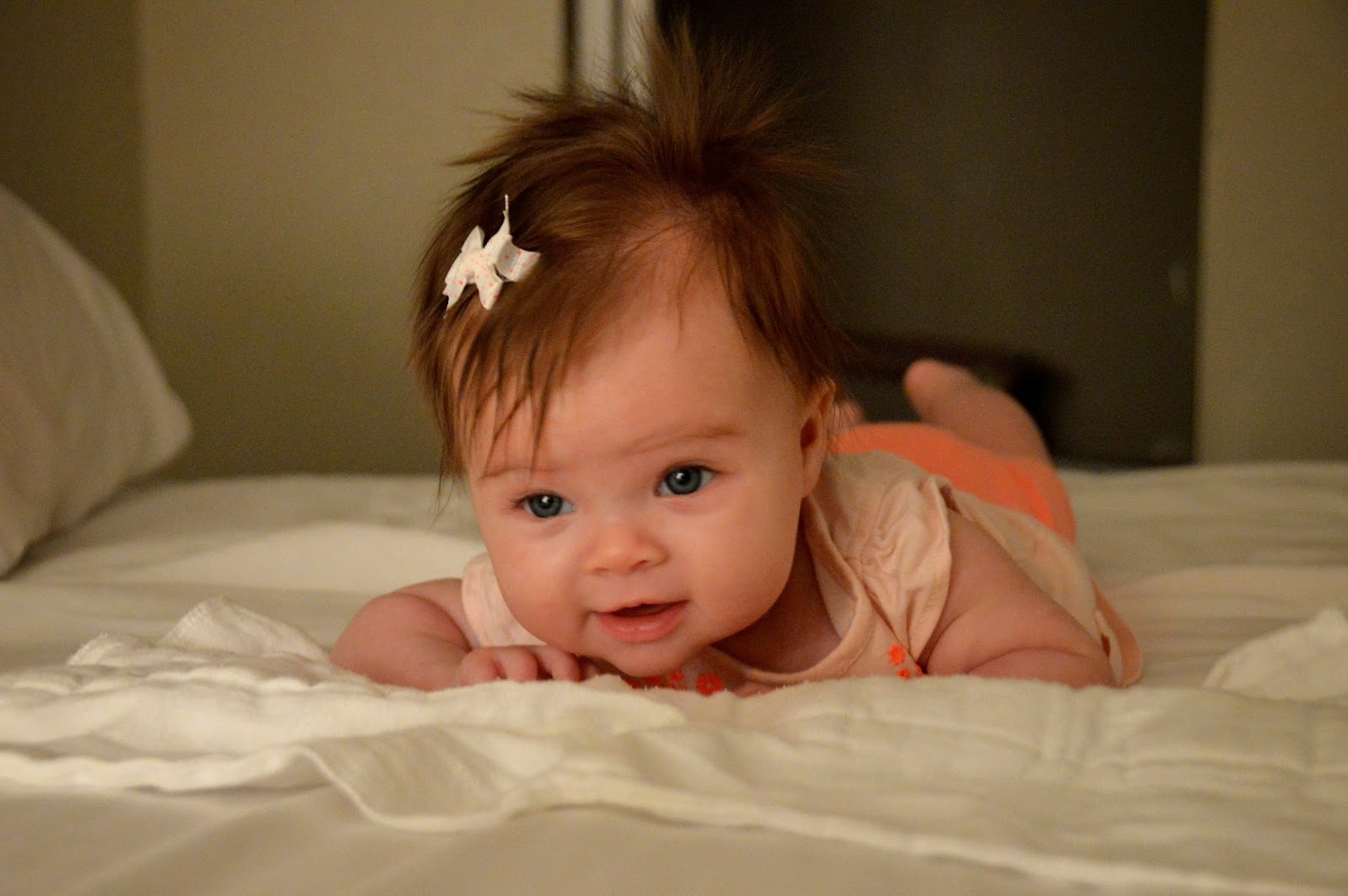 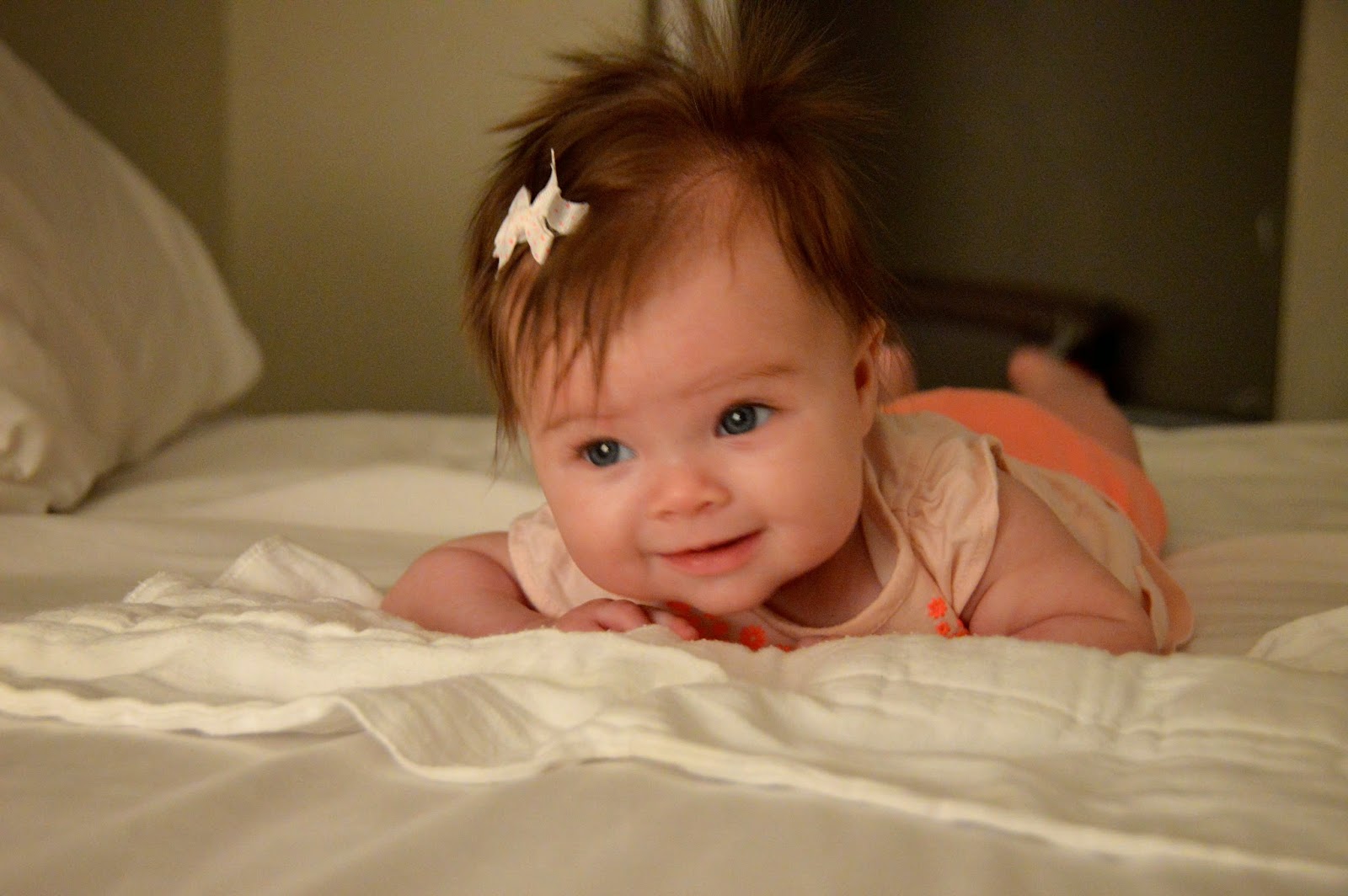 Loves sticking that tongue out! 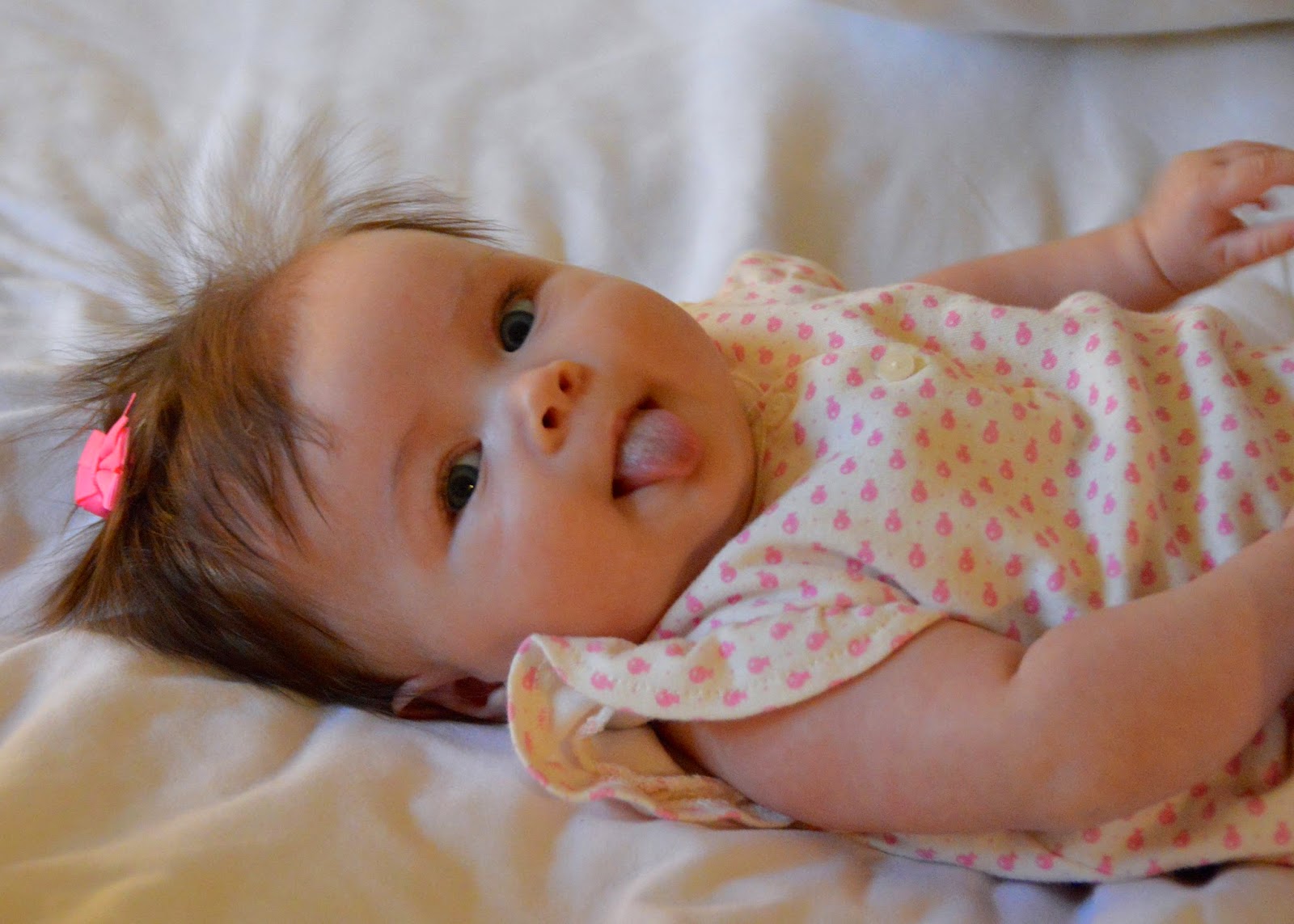 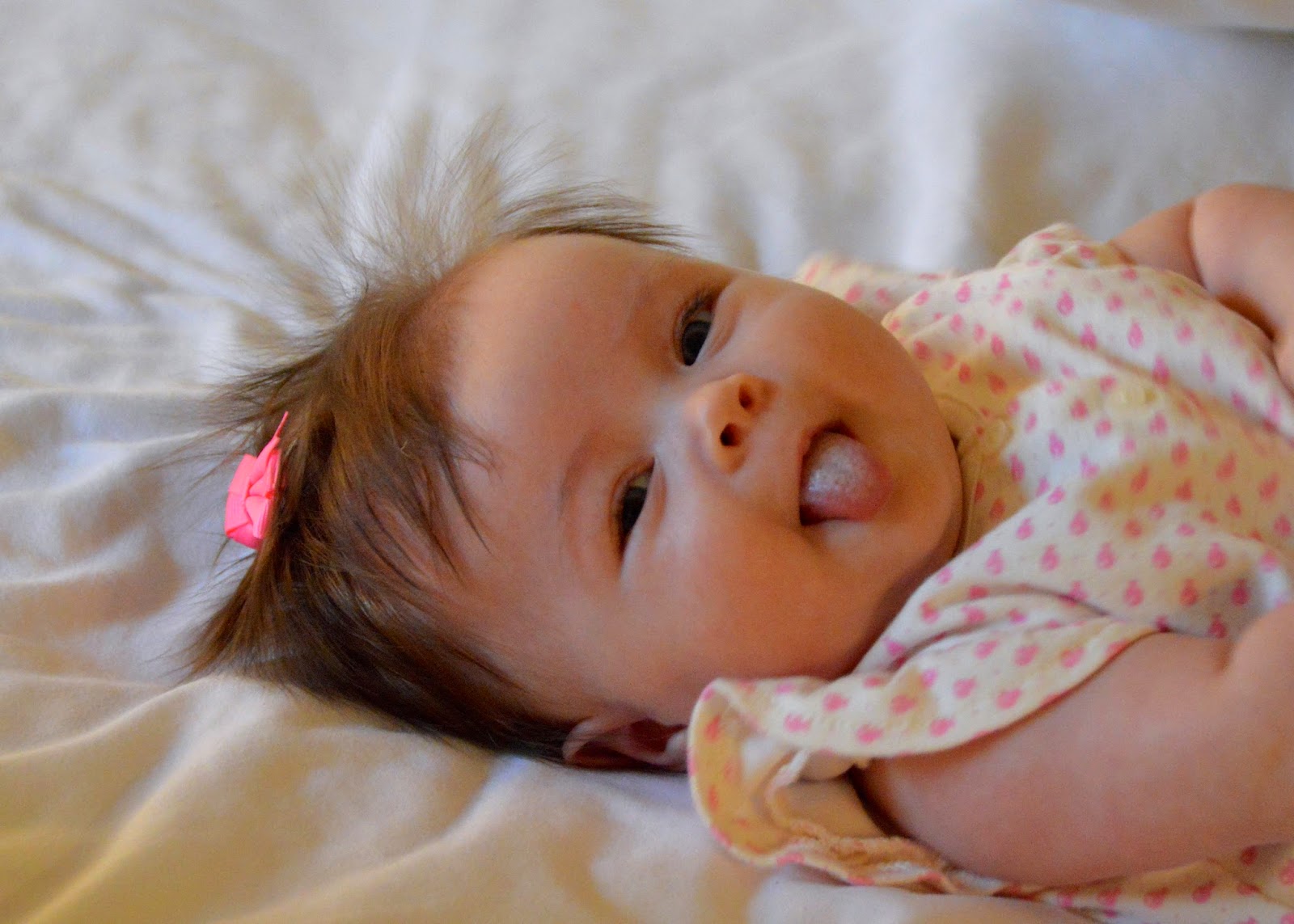 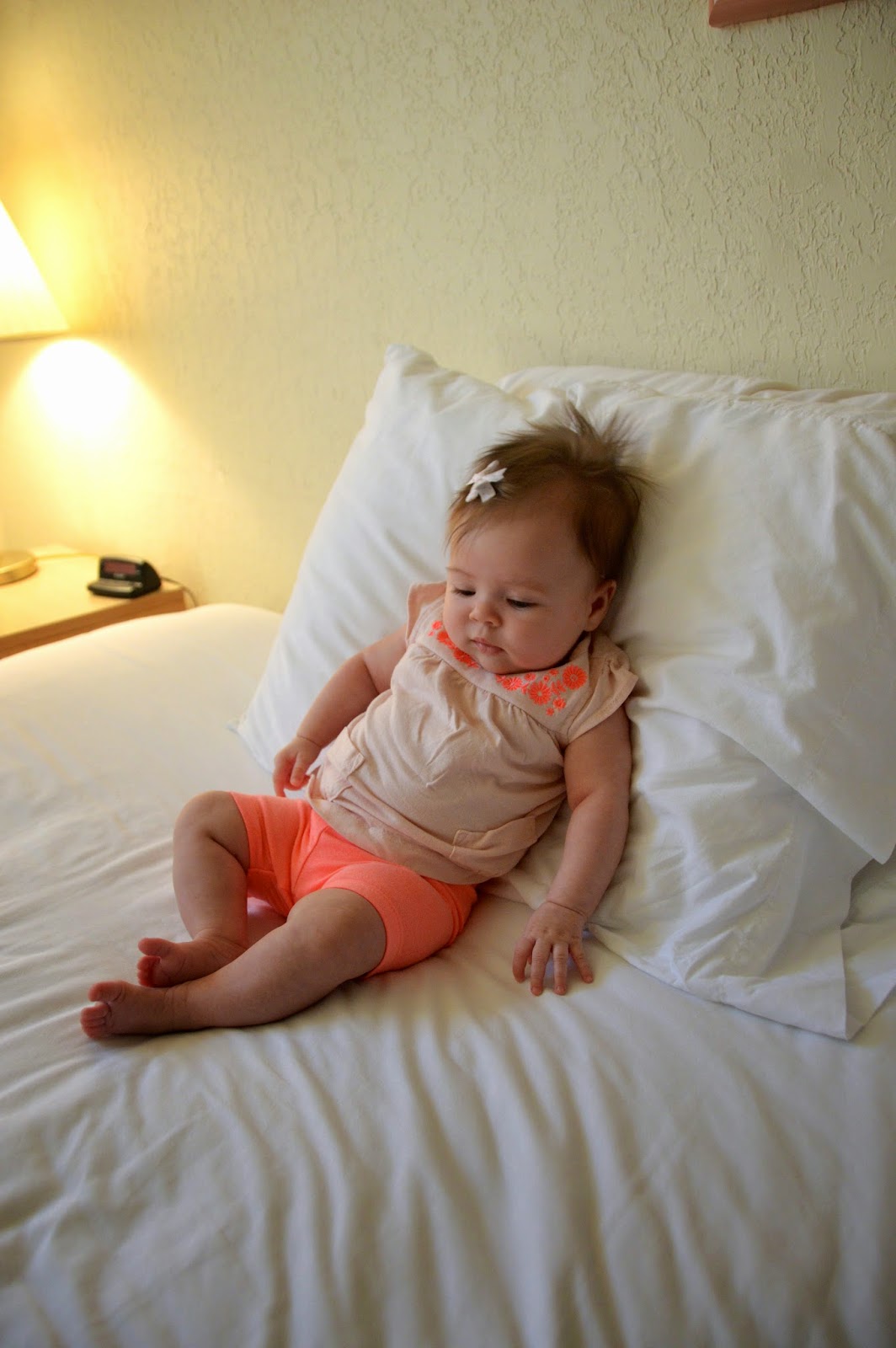 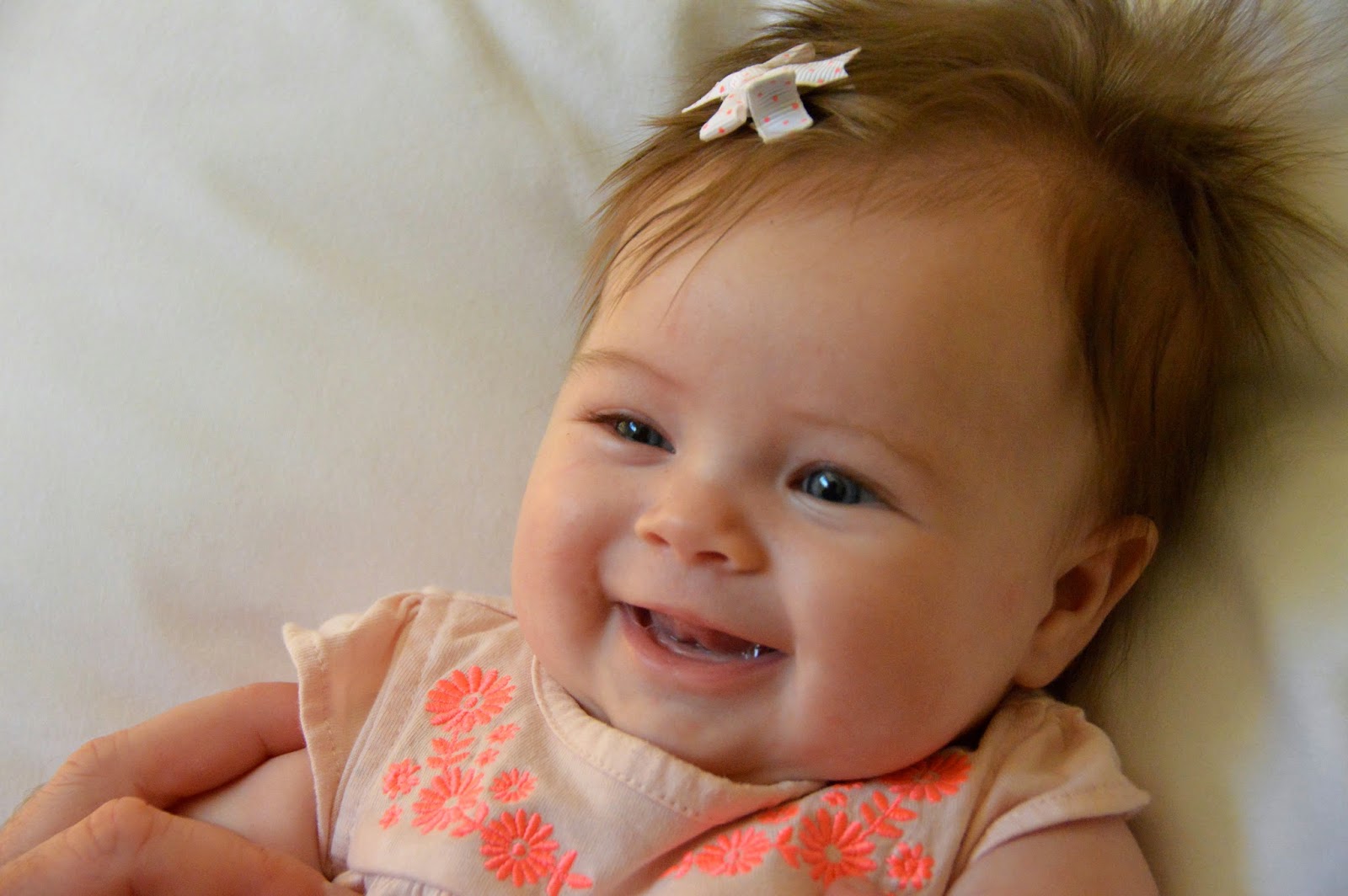 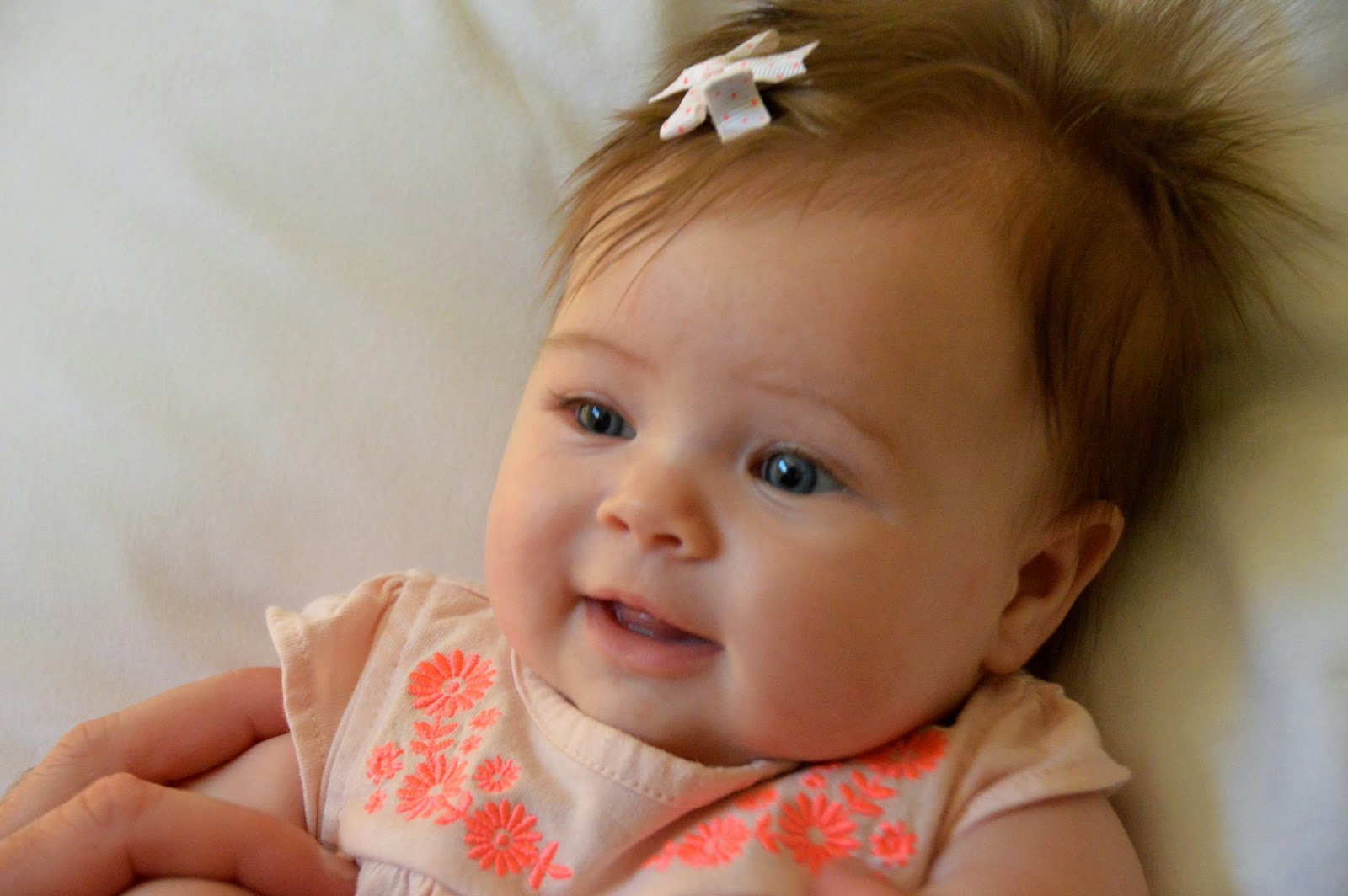 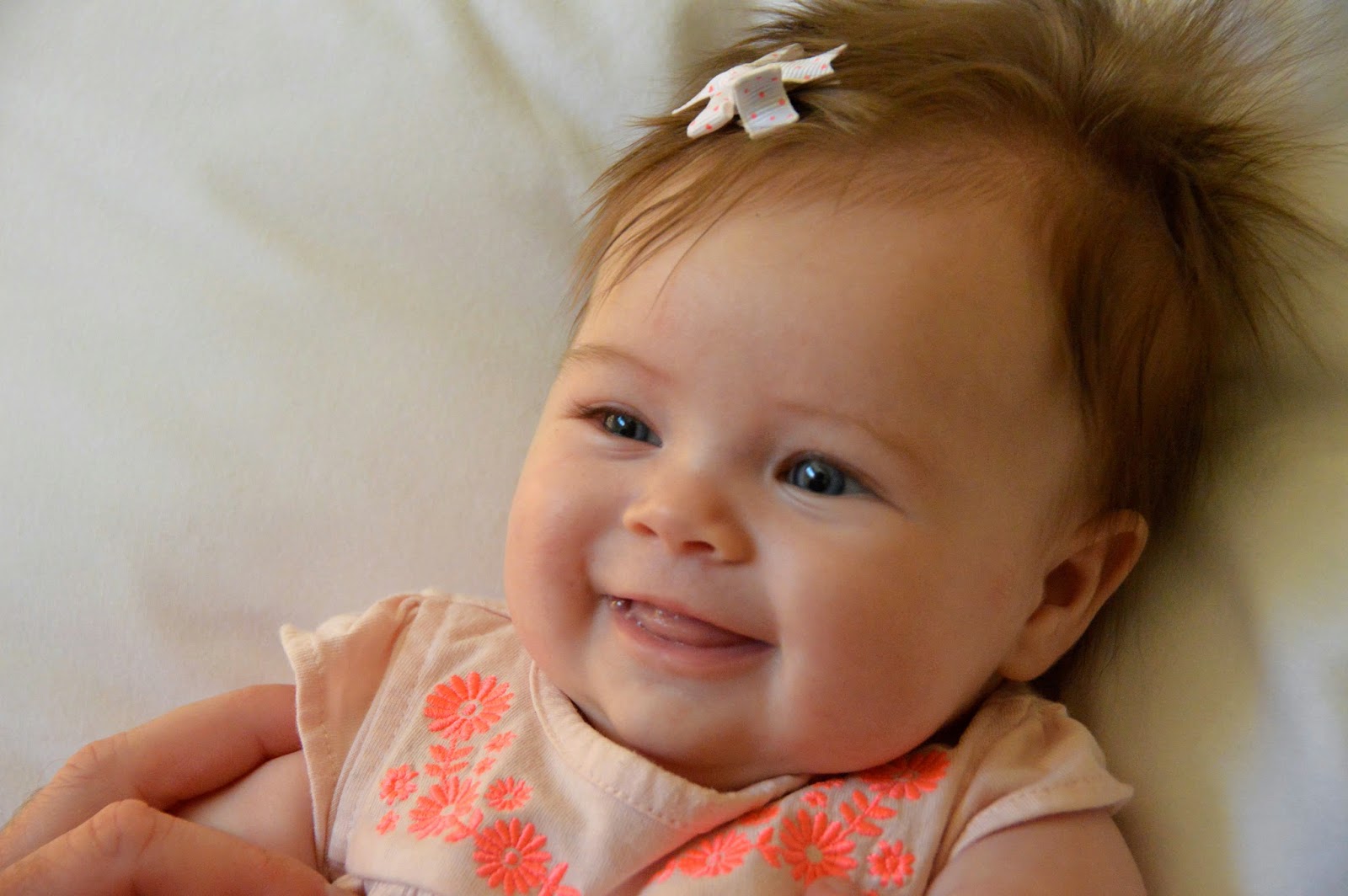 Postpartum Update: The bottle situation combined with her sleep issues really, really made it a tough week for me. I spend ALL my time being a mom and I work SO hard at it and it was frustrating to be trying so hard and not seeing fruits of that labor. I’m so thankful I’m behind in my blogging as I probably wouldn’t have been writing this in a very positive way at the time I was actually living it. I had a GREAT time at the beach but was just frustrated with the bottle/sleep combo of issues!

Sibling Comparisons: You can read about Kye’s 13th week here! Bless him with that hair! ALL three of my kids have had the same bald spot in the back. It’s so pitiful! I really see a lot of similarities in the way Tess and Kye look. I think she looks more like him than she does Britt at this age!

You can see Britt’s week 13 summary here. It’s crazy to me to see how much hair Britt had and then realize that Tess has even more. Our kids just keep getting hairier! 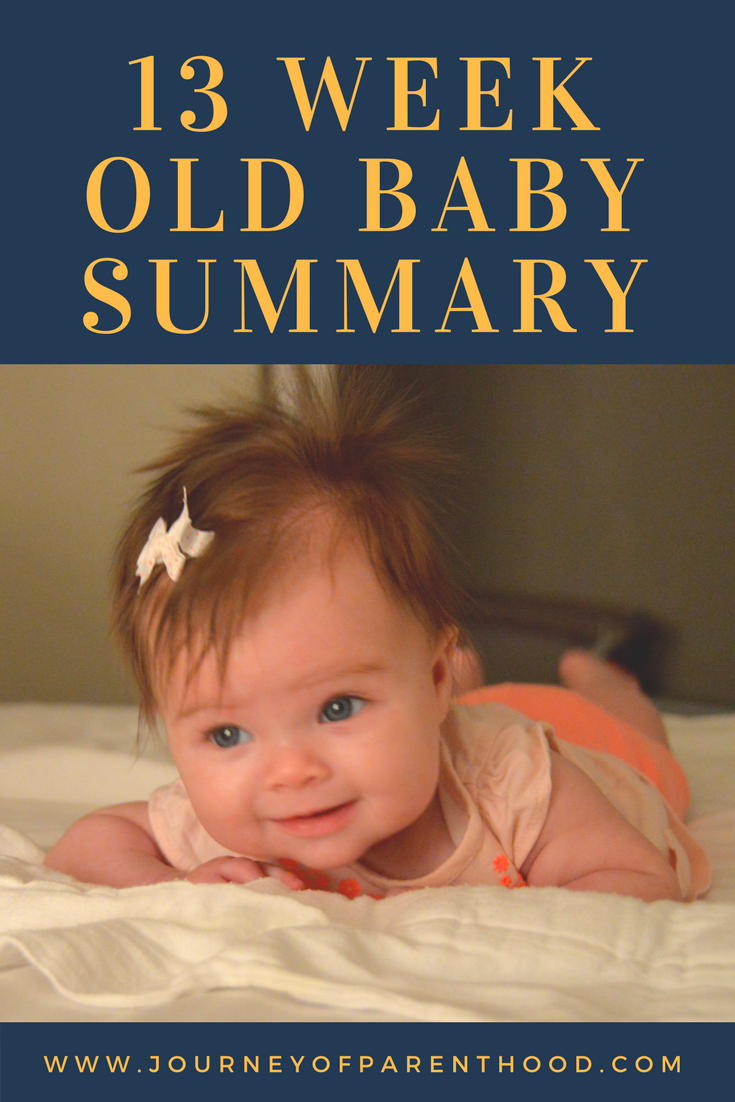