When we decided to surprise Kye with our Disney trip we had already started our hardcore Dave Ramsey budget plan so we went even cheaper on this trip than we normally do…if you even thought that was possible! Haha!

I booked us a hotel (I LOVE hotels.com! I always put that we have 6 people staying in our room…that way it only spits out places that have a separate bedroom from the living area…perfect when traveling with kids!) and got a steal on it. We also decided to only pay for one meal the entire trip so we packed a lot of our food. I even cooked a crock pot meal for us to bring along with us. We’re hardcore about saving money yet still want to make magical memories 🙂

At first Zach and I were a little bummed out when we left because Kye’s surprise hadn’t been as exciting as we had anticipated. But the more we talked about it, the more we realized the lesson we learned from it 🙂 AND the longer we were in the car…the more amped up Kye got about the whole thing! He was SO CHATTY the entire ride and was just being super, super silly 🙂 He watched Cars on the way down and was quoting all the movie lines and telling us all about the plot. Like we don’t already know it by heart 😉

I packed Kye’s dinner for the ride down and Zach and I planned on eating once he was in bed! It worked out really perfectly and we made it down there just in time for bed! 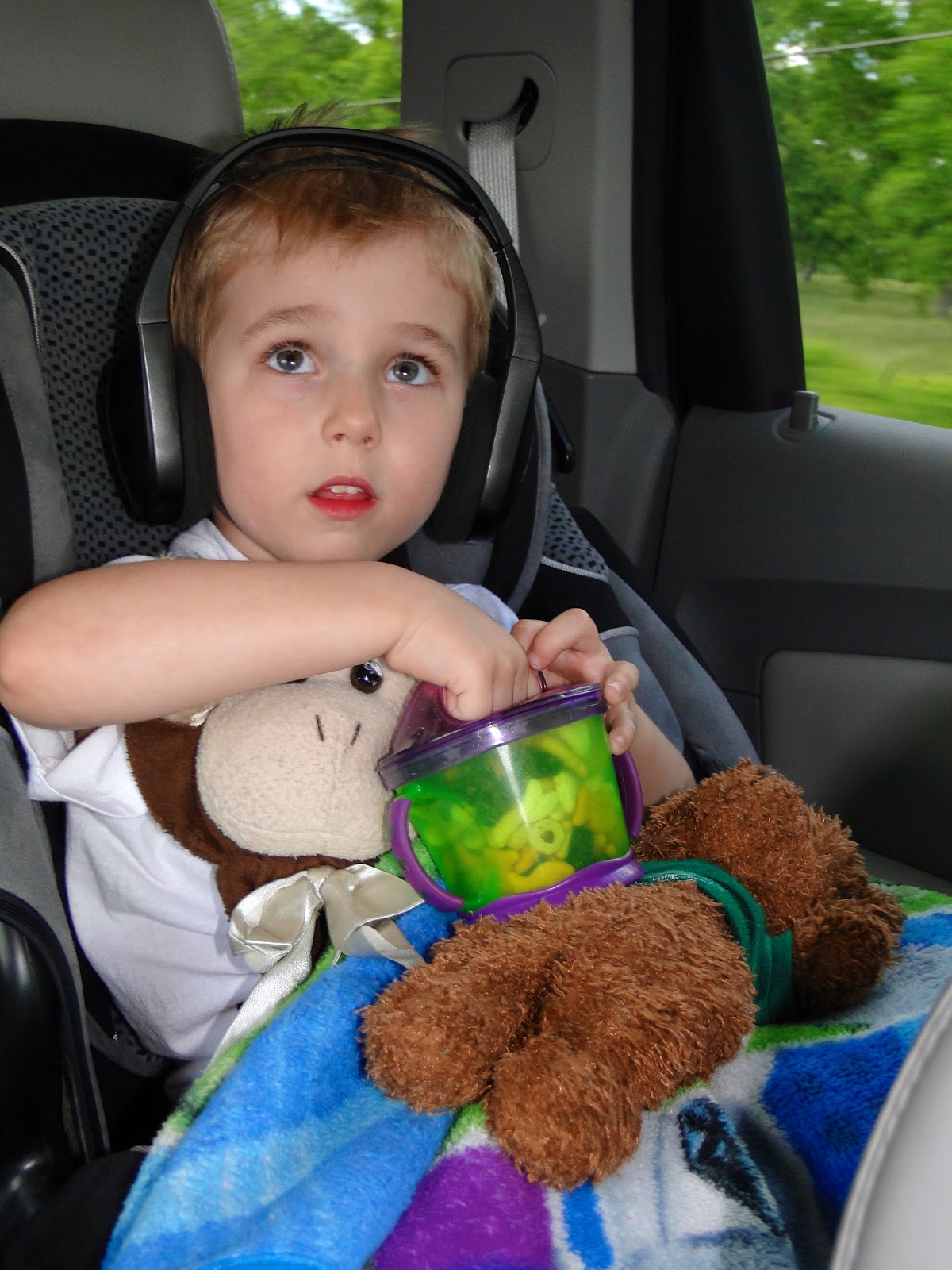 I wasn’t too sure what to expect out of the hotel room since it was so cheap…but it wasn’t too horrible. It was a HUGE room and we def could have had both kids there! They also had a great kitchenette area! Yes, it was very “bare bones” and we did see a roach (or two…) but we’d totally stay there again for a short trip. I def wouldn’t recommend it for a long Disney vaca but when you’re just using the room to sleep in, who cares how nice it is? It was also interesting how all the other guests seemed to be Spanish speaking? I guess the name is in Spanish…we stayed at Seralago Suites 😉 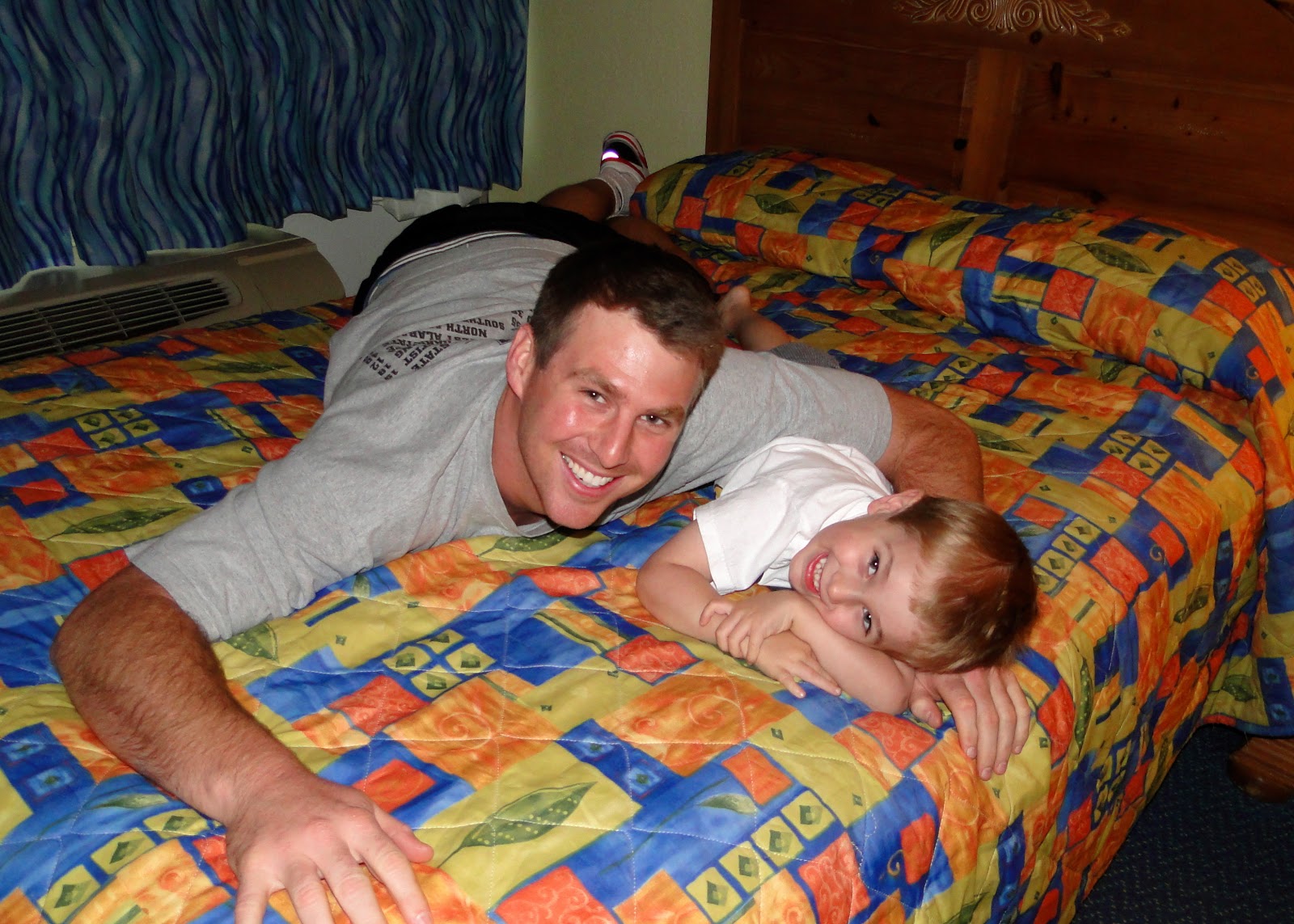 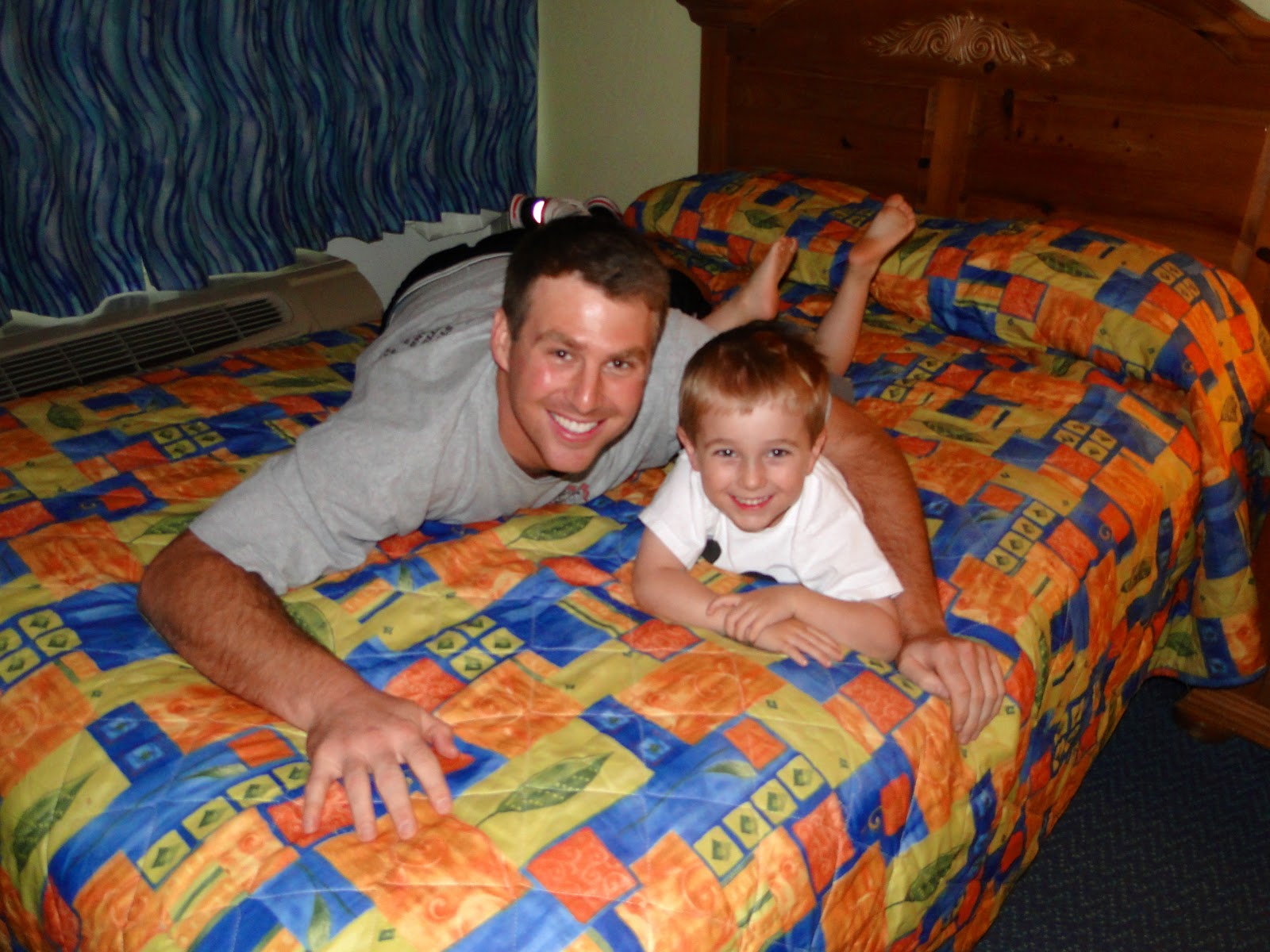 We brought along all of Kye’s typical travel bed stuff (his blow up toddler bed) but once we got there we decided to just let him sleep in one of the big beds. We planned to skip his nap the next day to go to the park and knew we’d be getting back late that night as well so why go through the hassle rigging up a sleep area for him? He’s NEVER slept in a “big bed” while traveling before and we made sure to tell him that it was just a special treat. We def don’t want him to assume it’s something he’ll always get to do, but in this case it worked out great and he was SO excited!!! 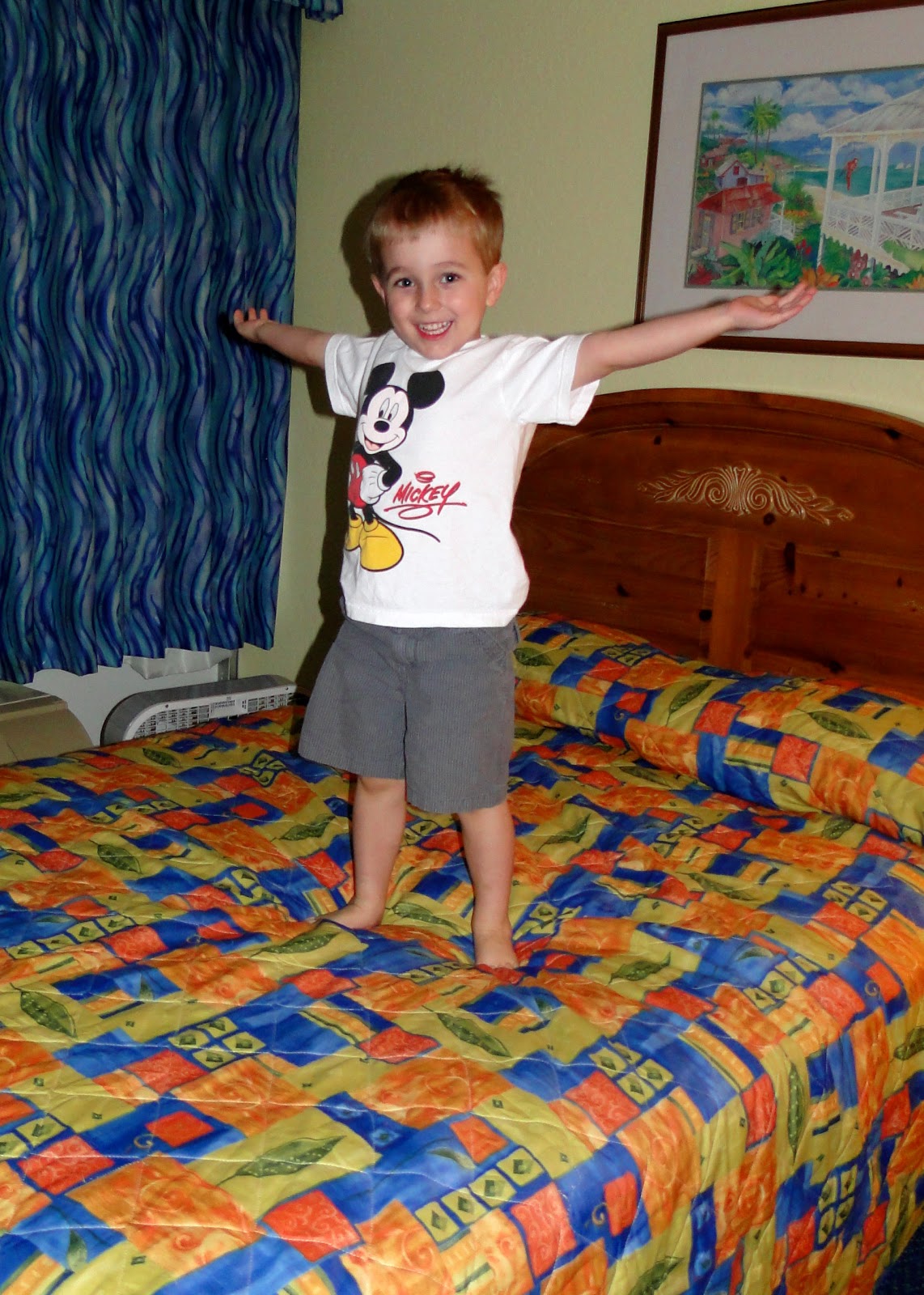 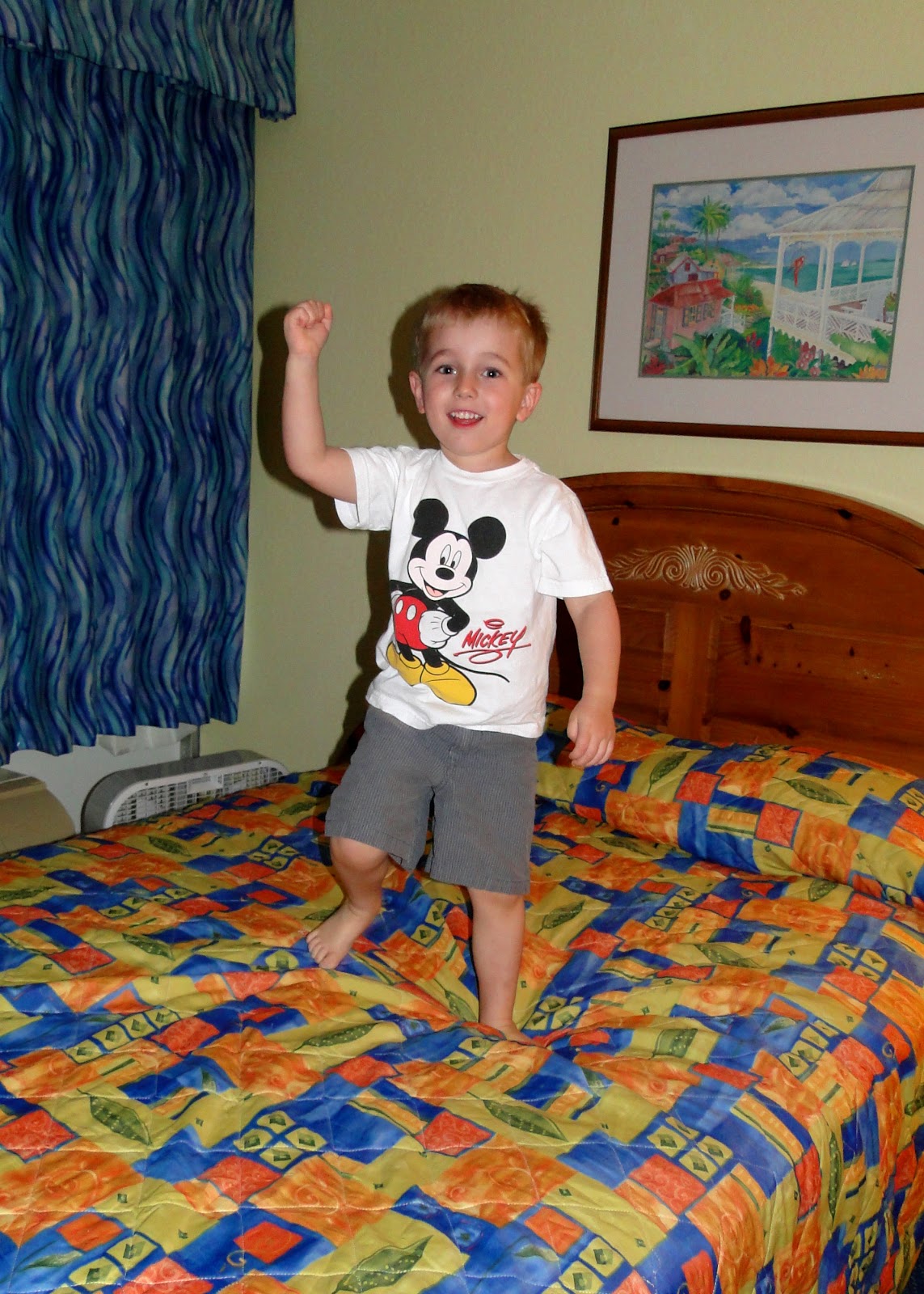 After his nap and then being cooped up in the car for so long and being super excited for the big Disney day…Kye needed to get out some energy before going to bed. So, of course, I told him to go for it and jump his little heart out. Gotta have some special privileges in a hotel room right? 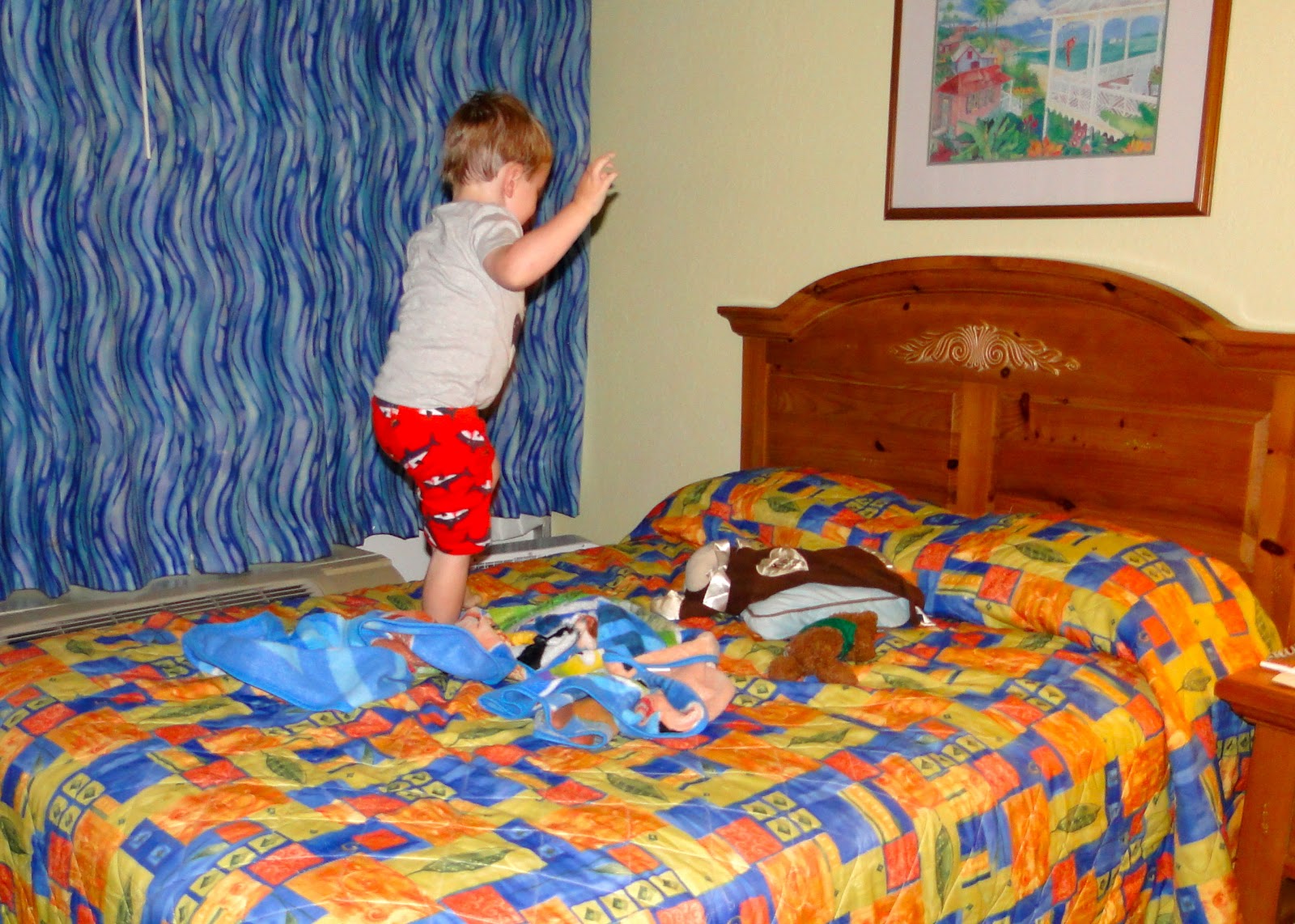 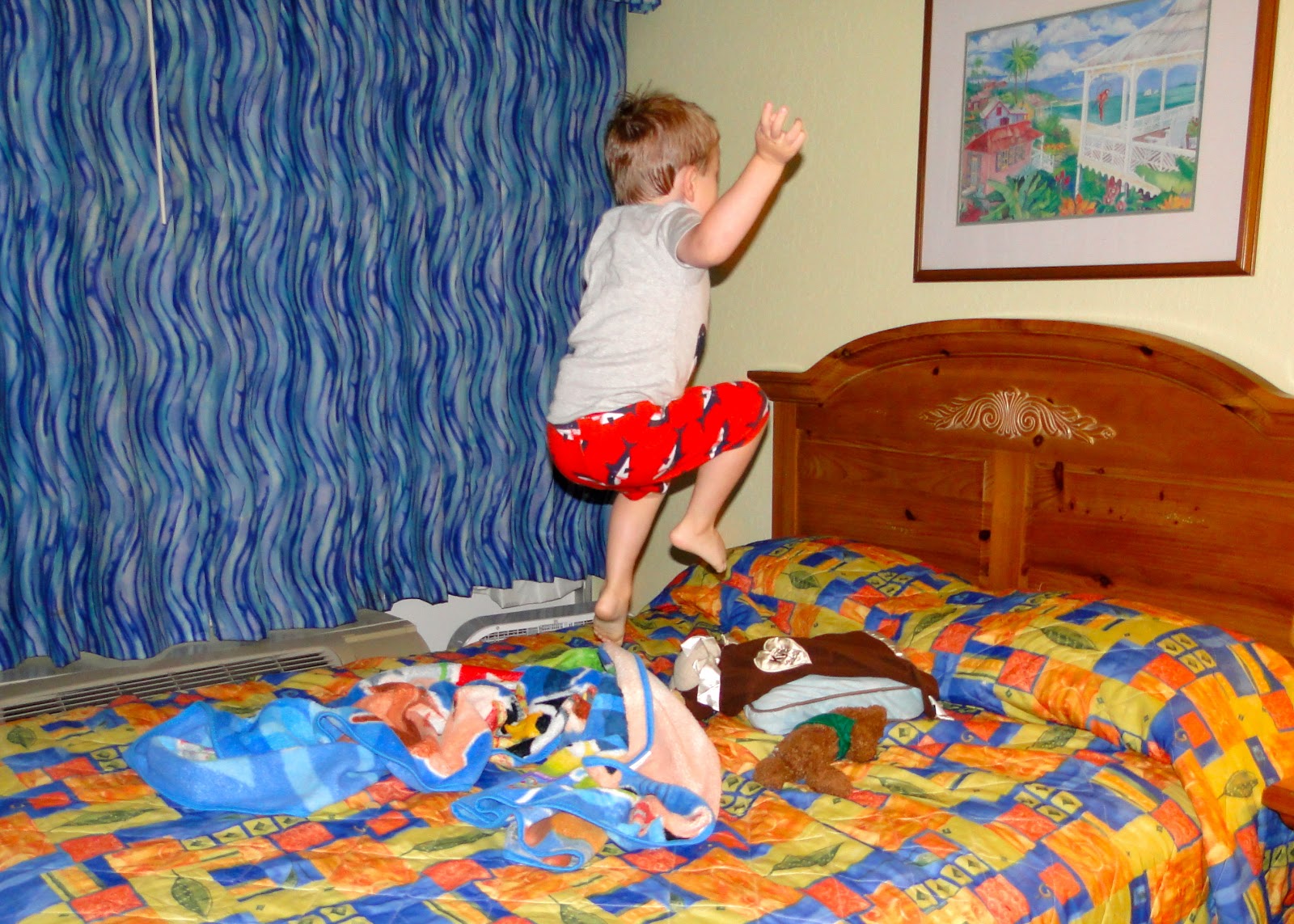 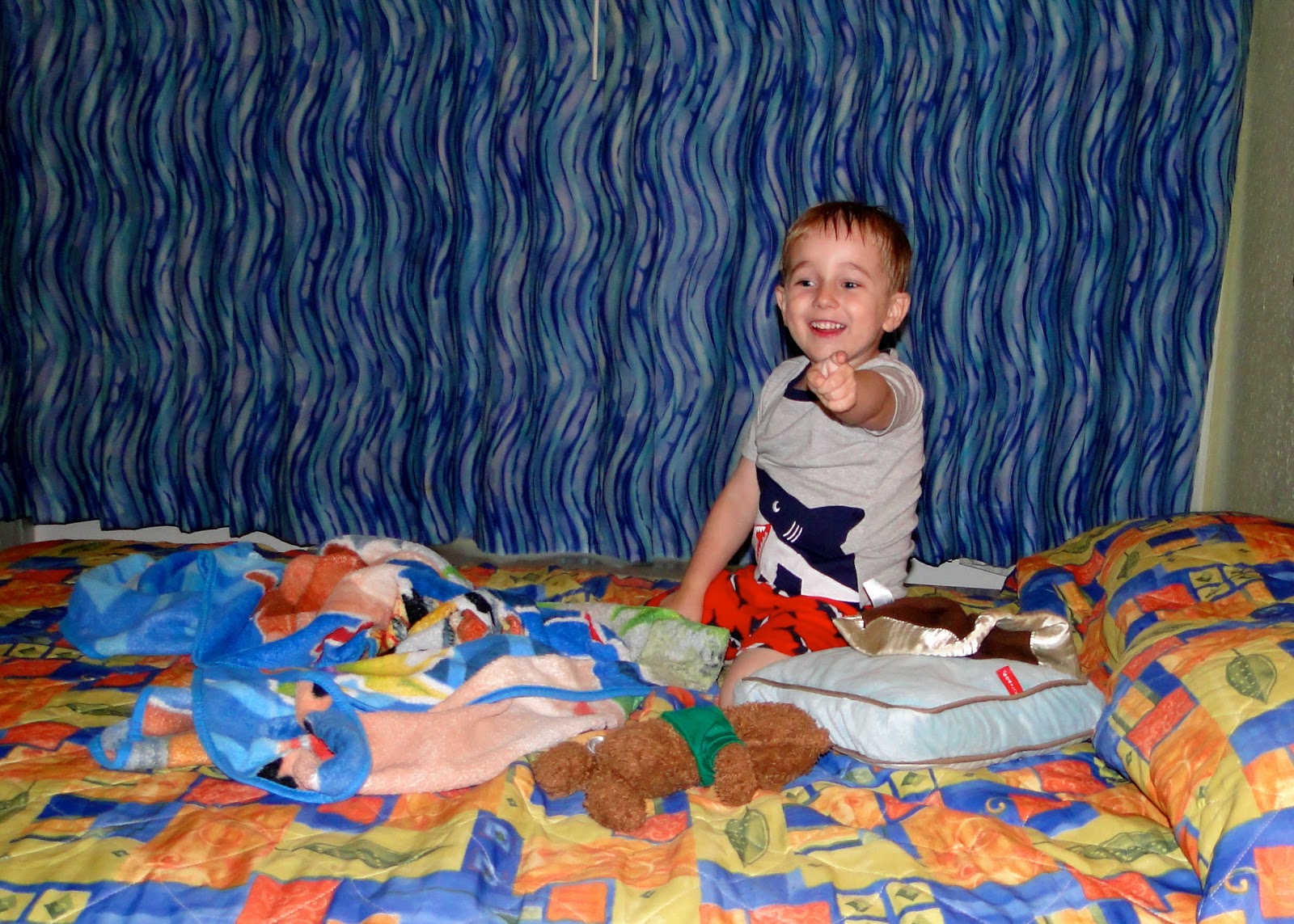 Once Kye was down for the night we heated up our dinner. I made a SUPER yummy crock pot cube steak recipe and we brought some instant mashed potatoes to make in the microwave. We also packed some bottle waters and it was DELICIOUS. I know that sounds random, but really it was SUCH a yummy meal. I’m totally craving it now just remembering it!

We sat down to watch The Office while we ate and realized…we were all caught up on the episodes! Oops! We channel surfed and happened to find Full House. I haven’t watched that show in AGES. And it was an episode where the Tanner family was AT Disney World! I mean what are the chances?!?! It was super cool to watch it and compare how Disney was then to how it is now. And, btw, watching it as an adult I fully appreciate Uncle Jessie’s hotness now haha! 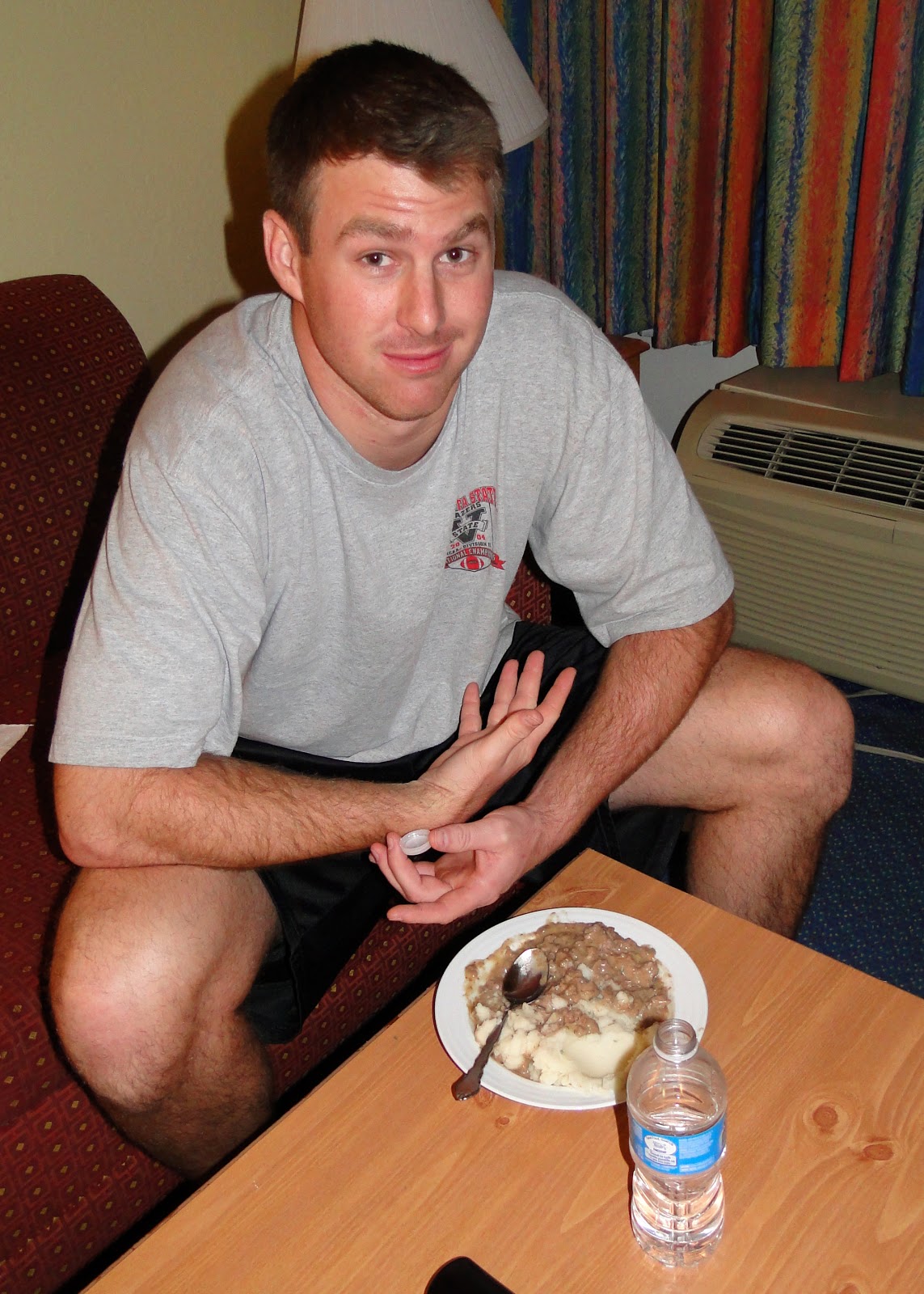 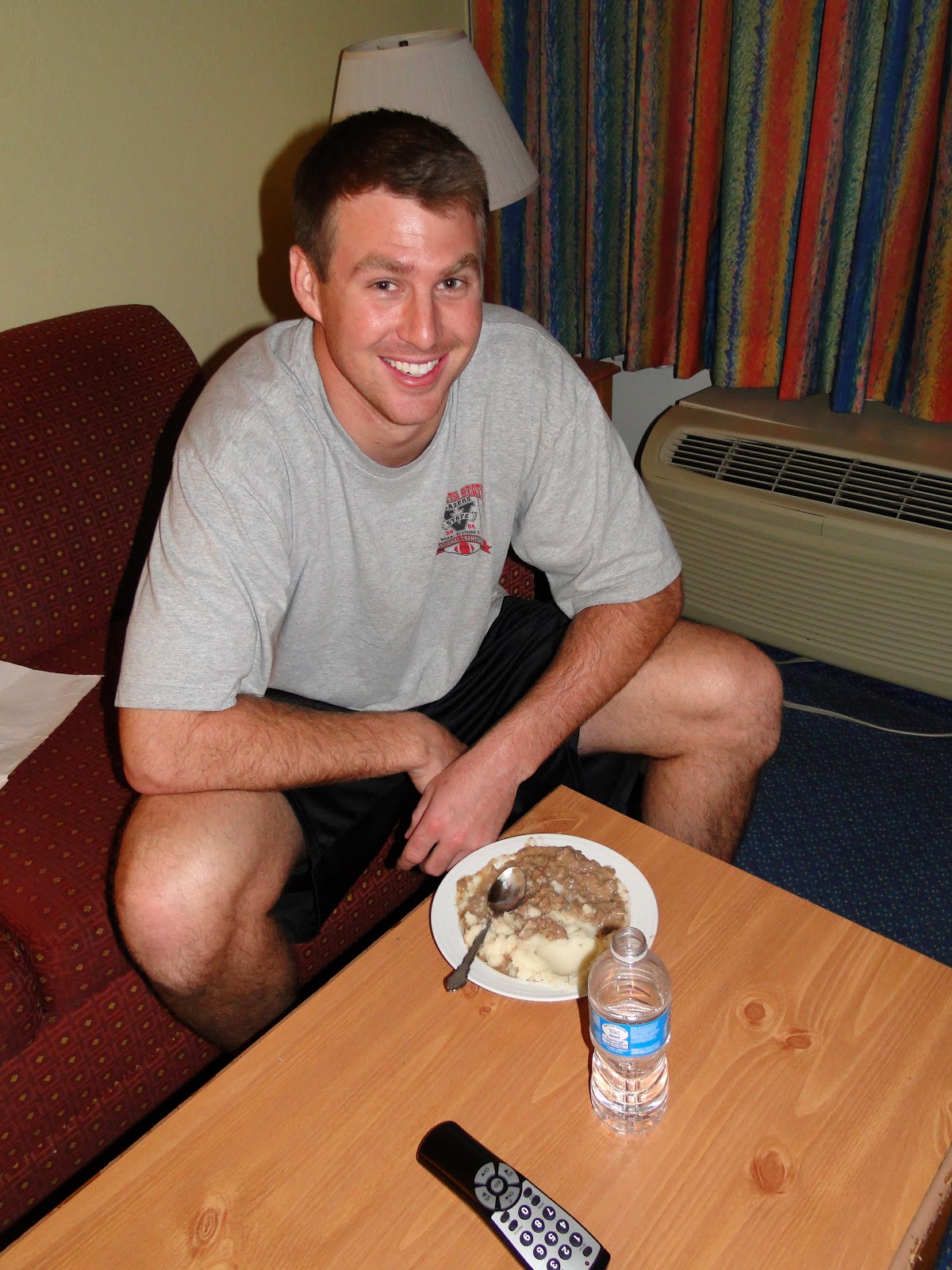 After we ate our meal Zach was craving some ice cream and decided to go get us a snack 🙂 It was SO yummy!!! We watched more Full House and ate it up then headed to bed for the night! It counted as a nice little date night for us for sure…we don’t often get to eat treats around here! 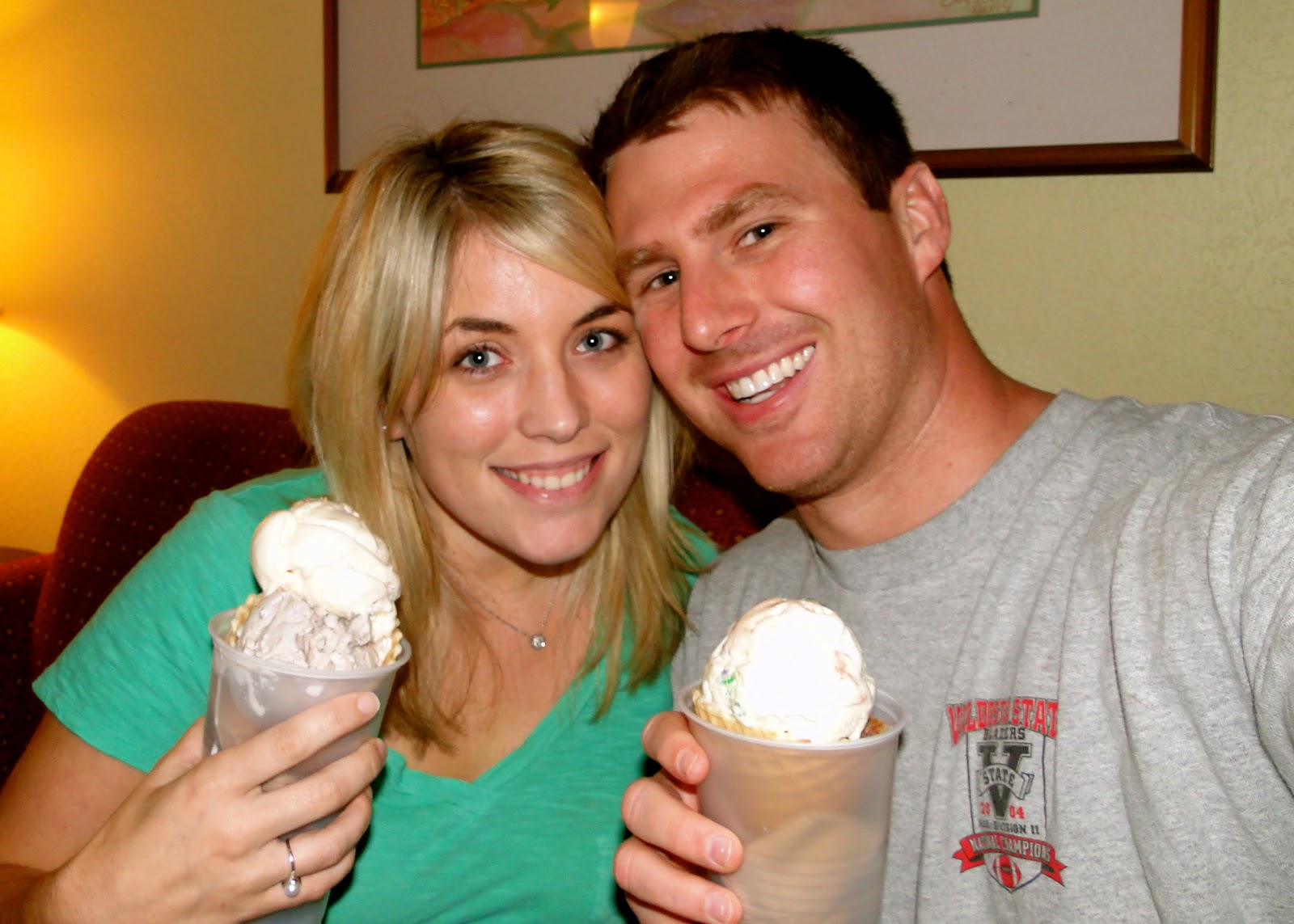 The night before going to Disney World is better, to me, than the night before Christmas. Christmas Eve is exciting, don’t get me wrong, but it doesn’t give me the same excitement that anticipation of Disney gives. I couldn’t sleep AT ALL. And neither could Kye. We were both up all night long tossing and turning. I’d wake up and look over in his bed and he’d be awake too! We were just too pumped to sleep 😉 Even though Zach WAS asleep…he must have been super pumped too because he was SINGING in his SLEEP!!! Legit!!!! Humming and singing WHILE sleeping!!! The next morning Kye said “Daddy you kept waking me up you were singing too loud!” hahahaha! Priceless 🙂

I always am the first one up on vacations as I like to get ready before getting everyone else up (it’s common for me to do that at home too. I’d rather be fully ready for the day right when I get up!) and Kye was awake soon after I got up. We probably only had a few hours of solid sleep the whole night but we were too pumped to let it phase us!

I made a batch of muffins before the trip and Kye ate a couple for breakfast while Zach and I drank our morning shakes. I was SO worried about making it in time for the opening show that we ended up getting to the park area an HOUR before the park opened haha. Better early than late, right? 😉 I’m glad Zach wasn’t too annoyed with me over it!!! 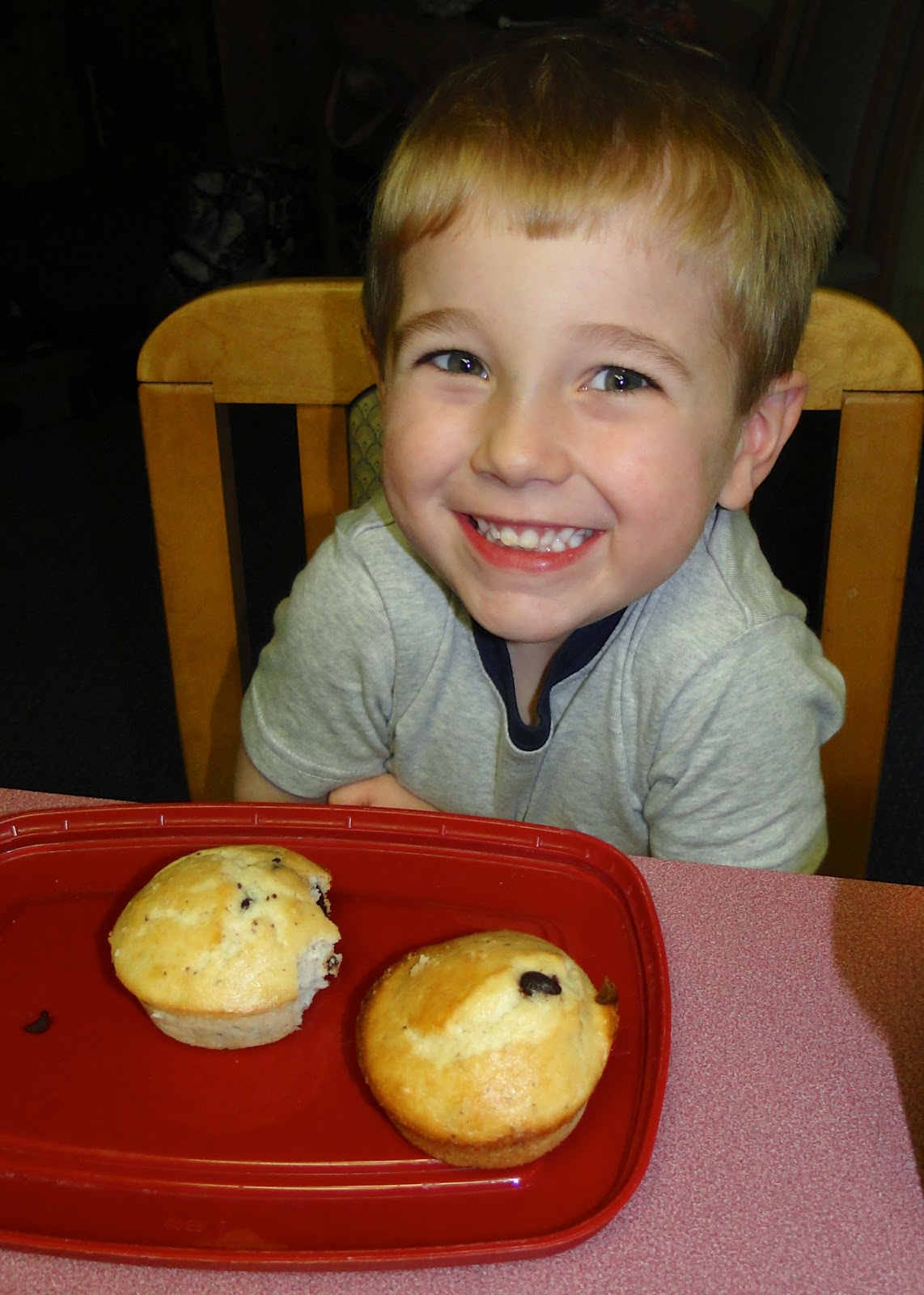