I very rarely get to spend time with my Dad’s side of the family. I’m not really sure why that is? I think partially because my parent’s divorced and I lived with Mom so of course we saw Mom’s family more. I also think it’s partially because there is a BIG age gap between me and my cousins! Since Dad was older when Brandon and I came around (Dad and I are 39 years apart!!!), my cousins are much older than we are and we are actually closer in age to our second cousins! And honestly I think a lot of it is due to the fact that the Sedgley side of the family is sooo spread out. People live ALL over the country!!!

While I hated the reason behind all of us gathering together, I did enjoy getting to see everyone. We were talking and realized that it was the first time we’ve ALL been together since Grammie died back when I was 10! That’s 15 years ago!!! Isn’t that a shame that it takes death to bring us together sometimes? It’s something I want to change for sure! I heard rumor of us starting up a family reunion and I’d LOVE that!!! I do think it was such a great testament to Uncle Spear and how much he touched all of our lives that we ALL dropped everything and went to South Carolina don’t you???

We were in town for 3 days and Suzanne and Todd (Uncle Spear and Aunt Cheryl’s daughter) had ALL of us over ALL three days! I felt guilty that during their time of grieving they had to host such a large group at their home but they do have an awesome house for entertaining and maybe, like me, they do better staying busy!

I am usually a big picture person (really? I am???) but I feel kinda awkward taking pictures during such a sad time. Some other people did though so I snapped some as they did so I wouldn’t be the only one doing it haha!!!

Right when we walked in the door Saturday evening to Suzanne’s house Mellina (My Aunt Donna’s daughter..one of 4 who are all so sweet!) grabbed Kye and ran. She LOVED on him the whole weekend and it was great for Zach and I. It gave us a chance to talk to everyone else and not have to be constantly keeping an eye on our kid! It made me feel good too because she went on and on about how smart he is. She couldn’t get over how well he talks (I know he talks but I often feel like he speaks in a way that only I understand as his mom ya know? So hearing from someone else that she could understand him well too made me realize that he really CAN talk!). I really enjoyed visiting with her and looking through all of her Shutterfly books…it inspired me to give it a try too (once I get caught up on the blogging anyway…). 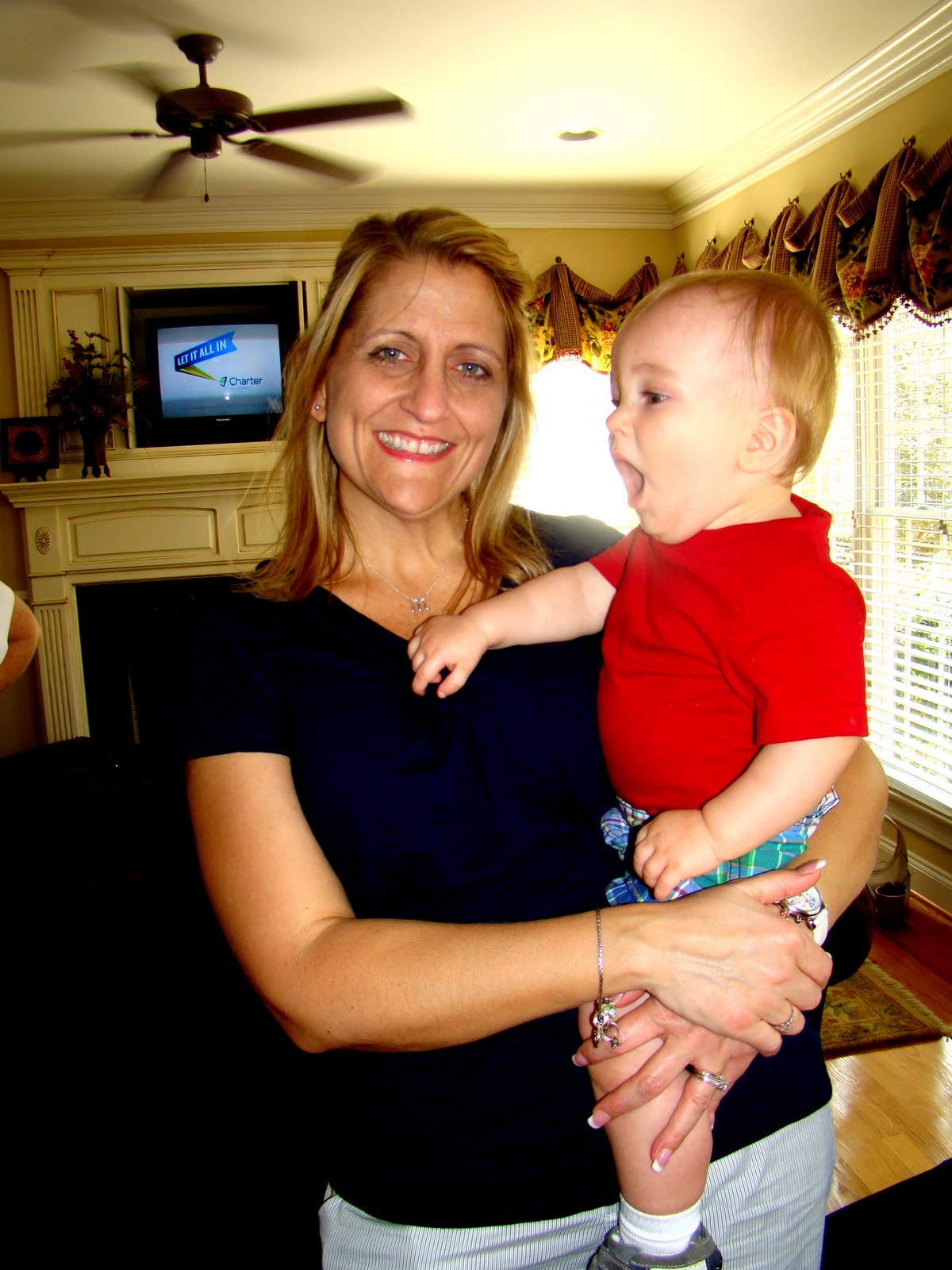 Kye really felt right at home at the house and we fell in love with their backyard. They seriously have the prettiest grass I’ve ever seen! I’m jealous for sure!!! 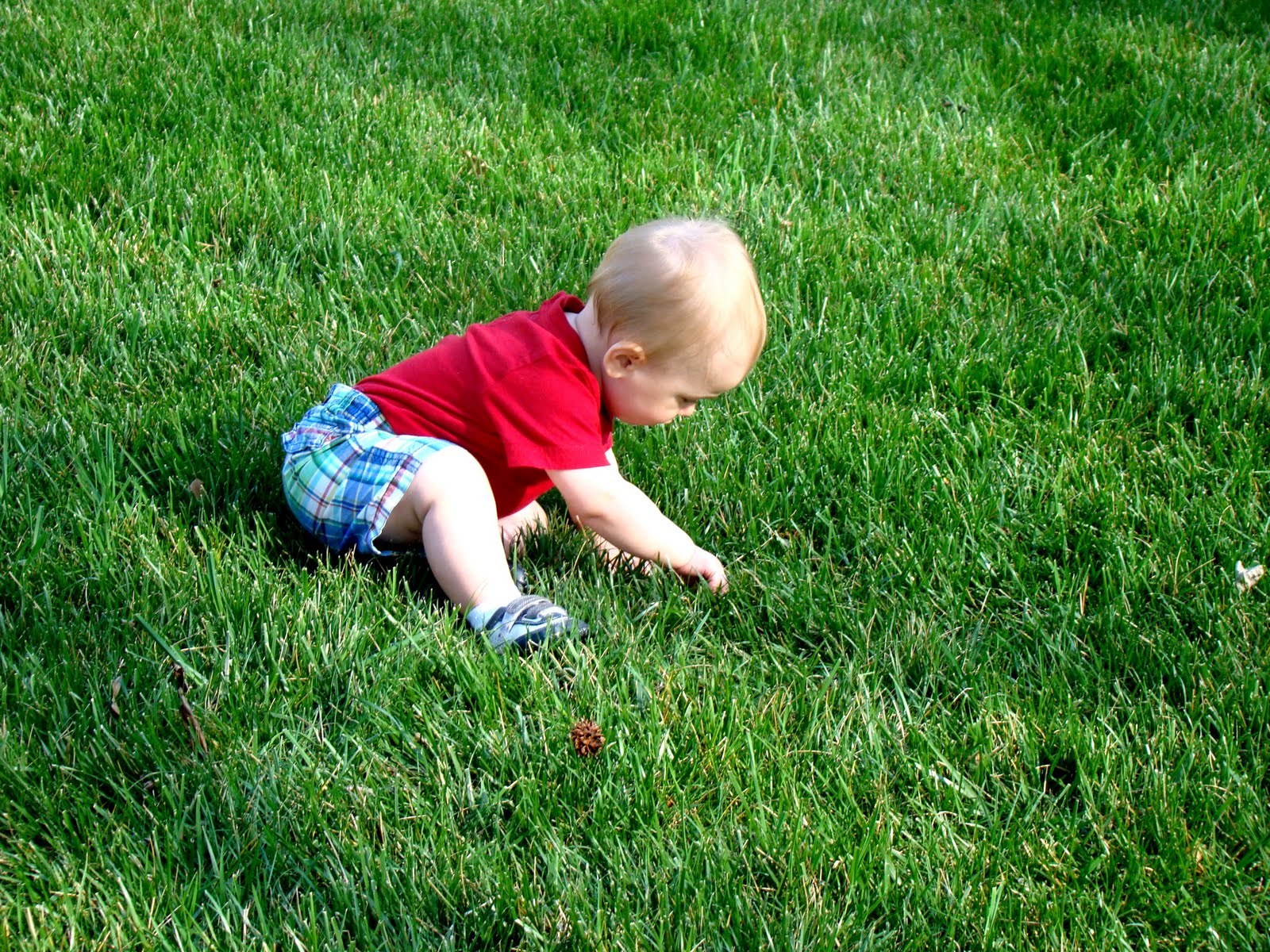 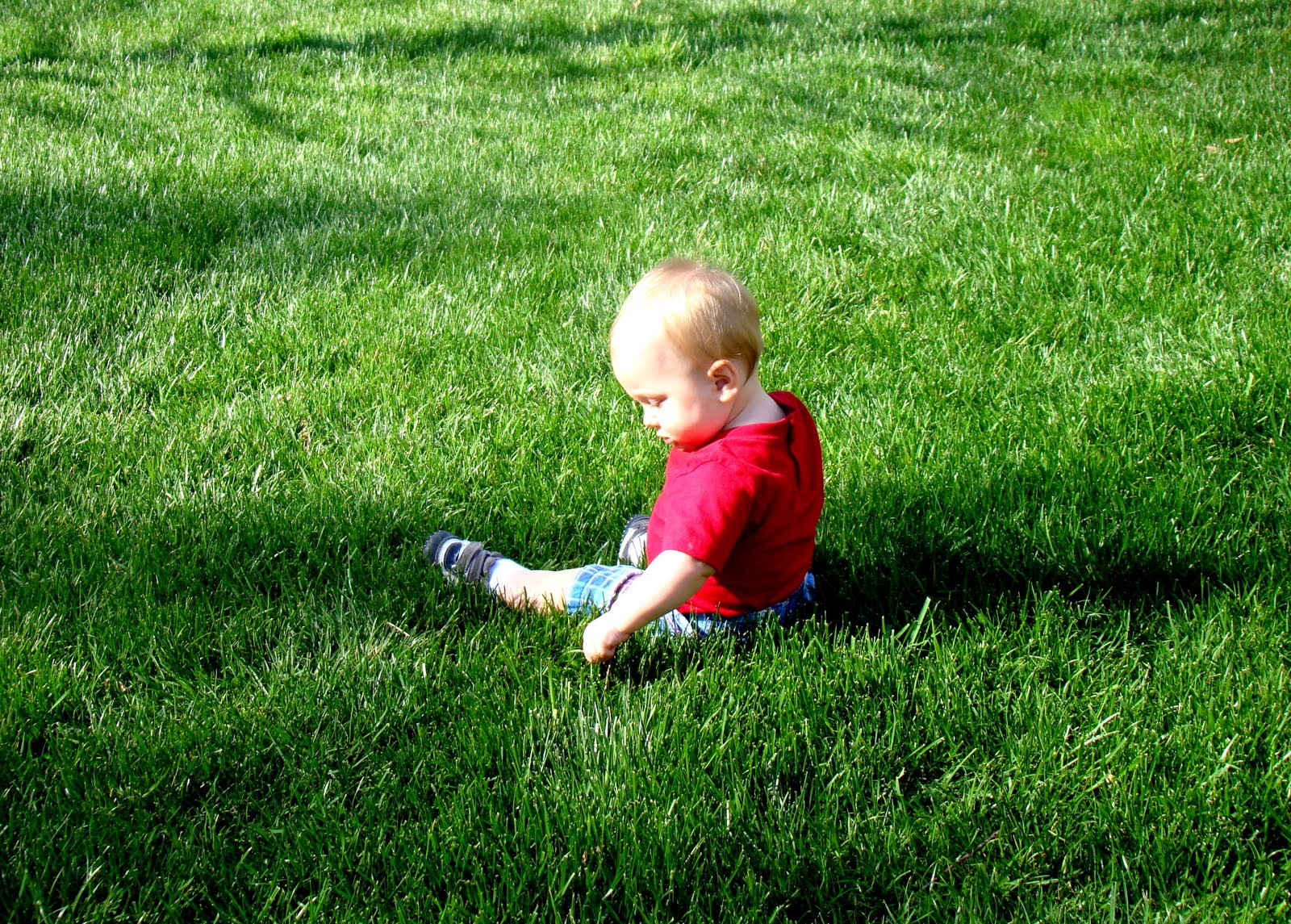 Another person who took to Kye right away was Madison. Madison is my second cousin and is Uncle Spear’s grand-daughter. She was actually the flower girl in our wedding! At 6 years old she is more mature than most 10 year olds I know. Her parents are really raising her right. She has such an understanding of death and of God and has handled this whole thing so amazingly. I spent a long time talking to Suzanne about how she and Todd have raised Madison so spiritually grounded and she said the key is to PRAY all the time together! Madison played so well with Kye and she was precious when she said to him that he’s a good boy and is going to grow up to be a good man like her grandpa (she actually calls him “Booty” haha). Zach was with them when she said this and he told her that he hopes Kye does as her grandpa was a great man.

Kye had a great time playing with her and it was funny because for a girl she’s ROUGH! All the “adults” were nervous watching her play with him but I was right there watching and making sure she didn’t get too rough with him. She said she wants to babysit for him when she gets older 🙂 Todd and Suzanne drive through some when they go to Disney so I hope they will stop by! 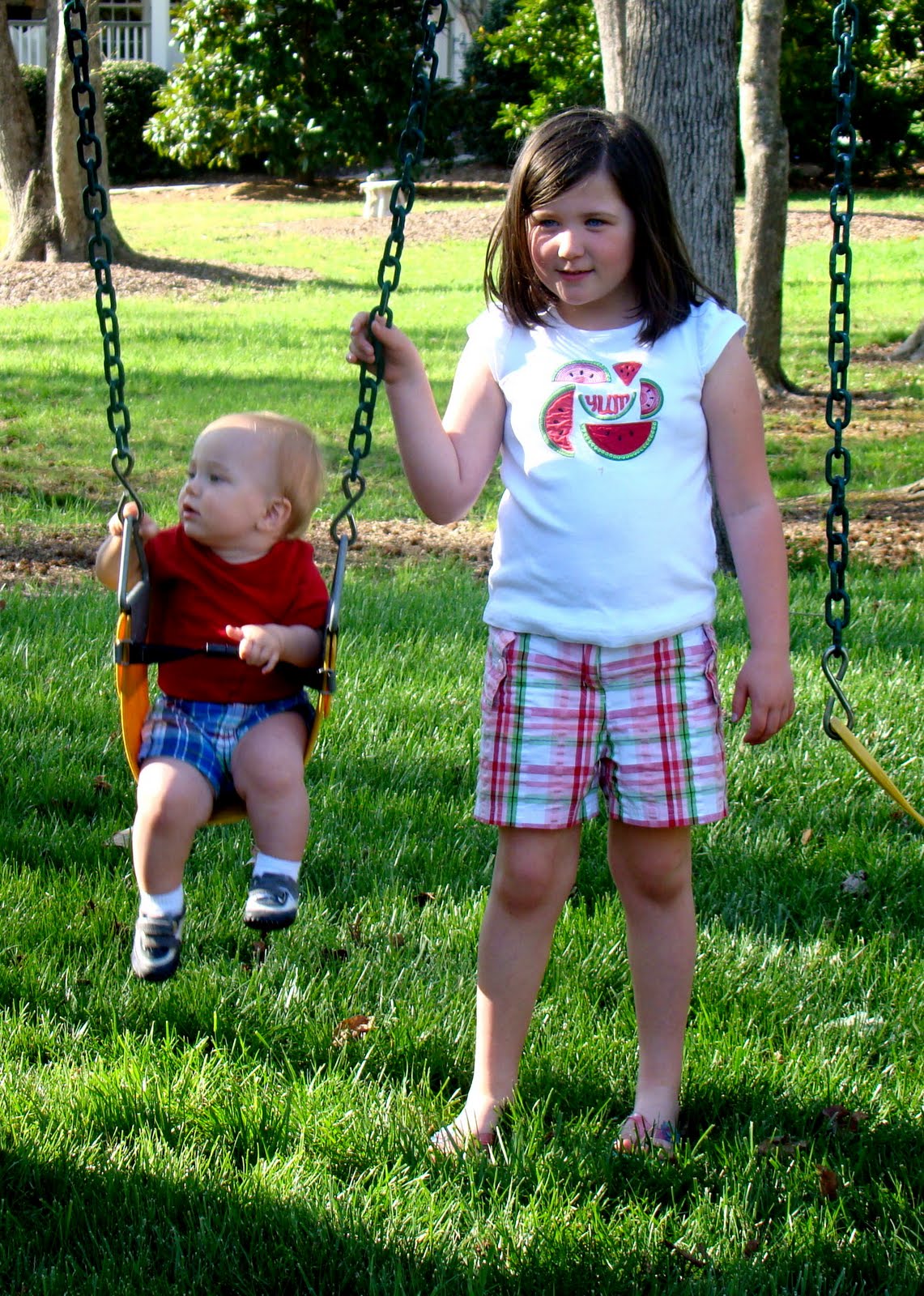 she was pushing him high! 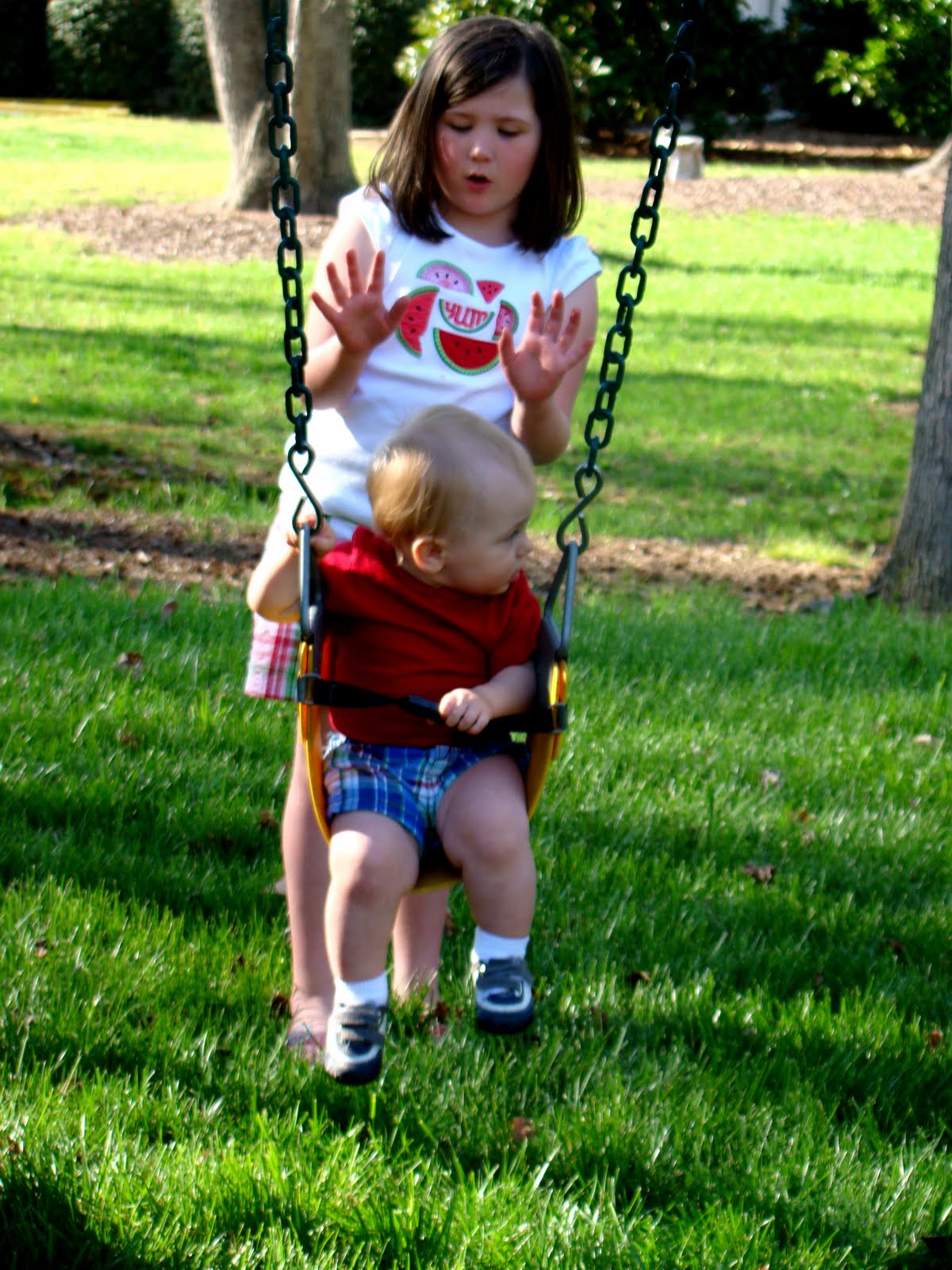 he looks a little nervous haha 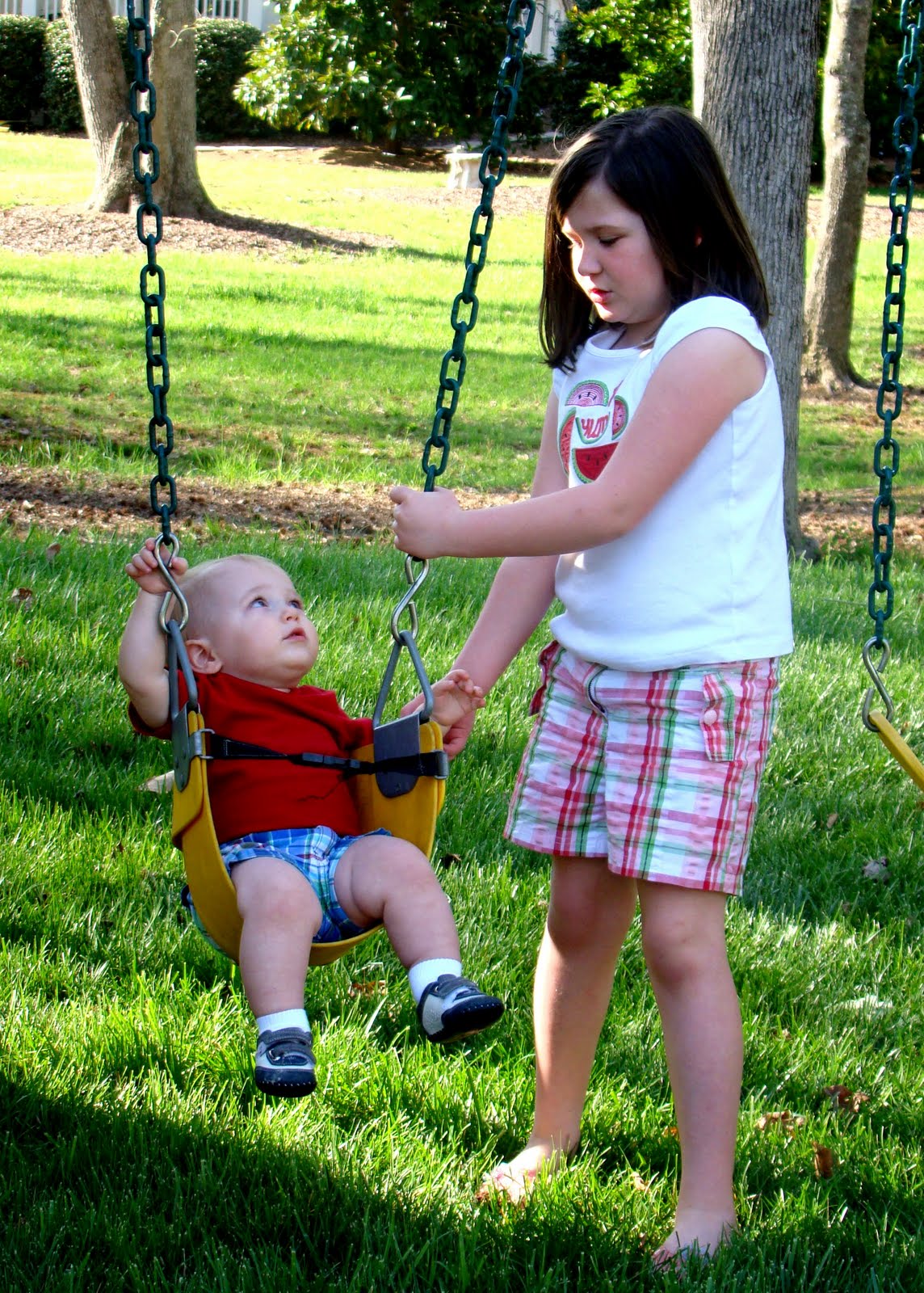 Daddy took a turn playing too! 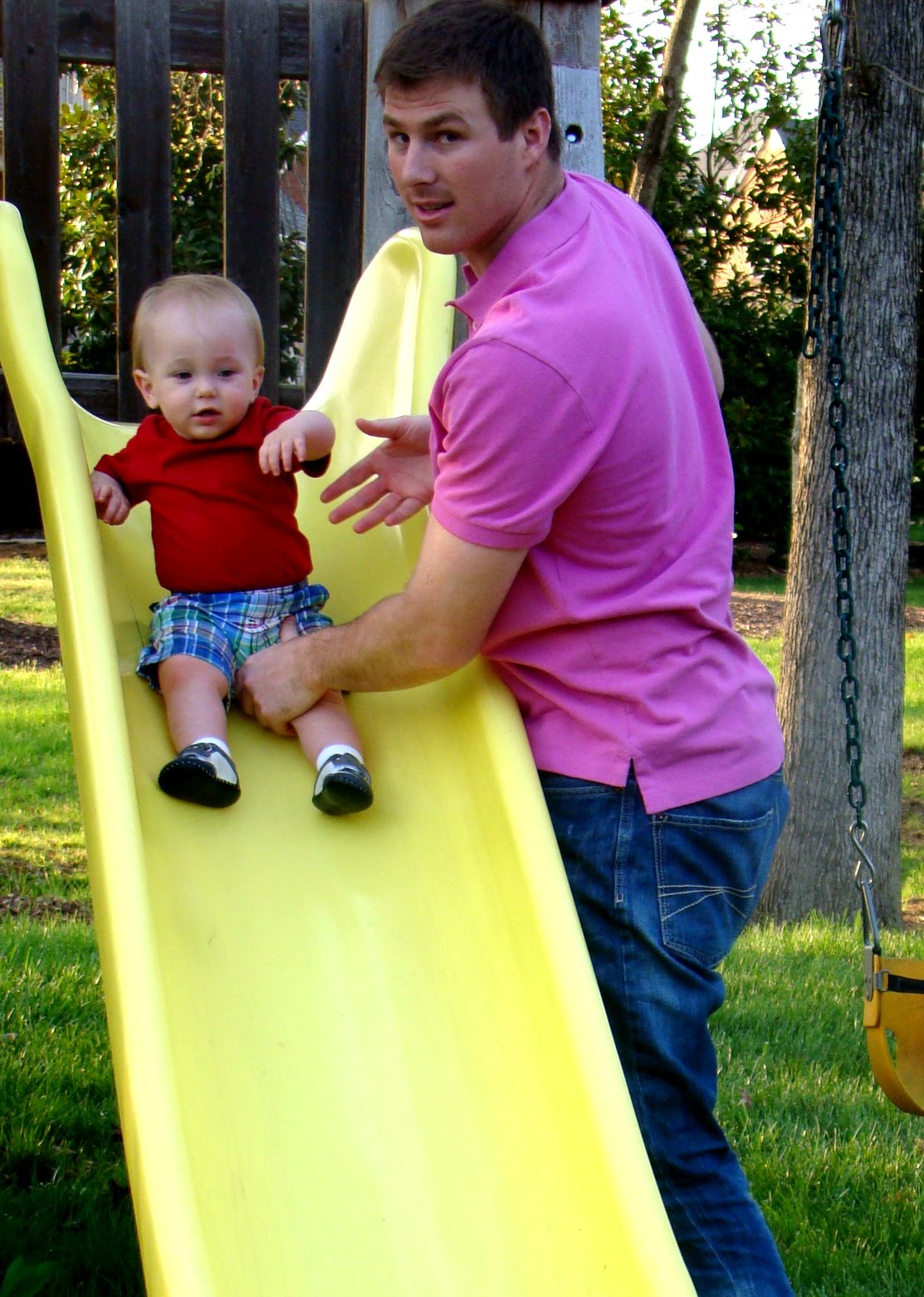 I was in awe of Suzanne, Laurie, and Lisa. They are Uncle Spear and Aunt Cheryl’s daughters and they were incredible through everything. He was only 65 years old and had such a tough year this past year dealing with the ALS. If I were them I KNOW I wouldn’t even be able to get out of bed, let alone entertain a house full of people! They are AMAZING women and do you know where they get it? Their mom! Aunt Cheryl is so strong and has so much grace. During the whole weekend I never saw her lose it. She remained calm and collected through everything. She has been through SO much but she has never lost her faith, her strength, or her smile. I wish so much that we lived closer to Greenville so we could see all of them more often! Growing up I always thought Suzanne was the most beautiful woman I knew (you can ask my mom, I really did say that!) and now as an adult I still feel that way. She’s also an amazing mother who I hope to be compared to someday! I cherished our long talk and that we both got tears in our eyes together when talking about Uncle Spear. She told me that he was proud of me and that I had many opportunities to do wrong but I chose to do right. I’ll never forget that and it meant the world to me to hear! Laurie and Lisa are both so loving and fun as well and Zach immediately bonded with Lisa’s kids, Josh and Meggin (who are closer to our age!), and they are both great Christians as well!

Lisa with her husband Mark 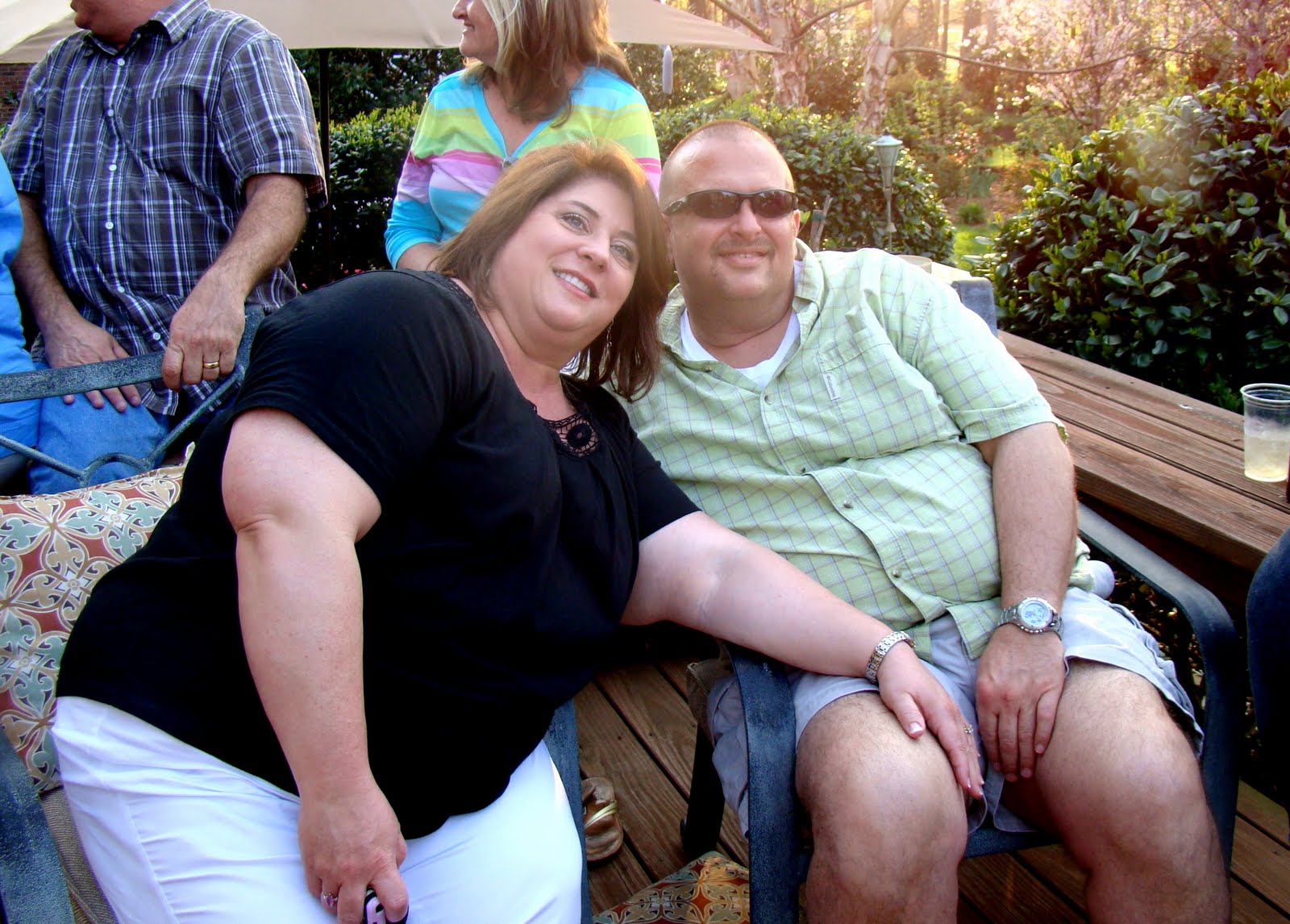 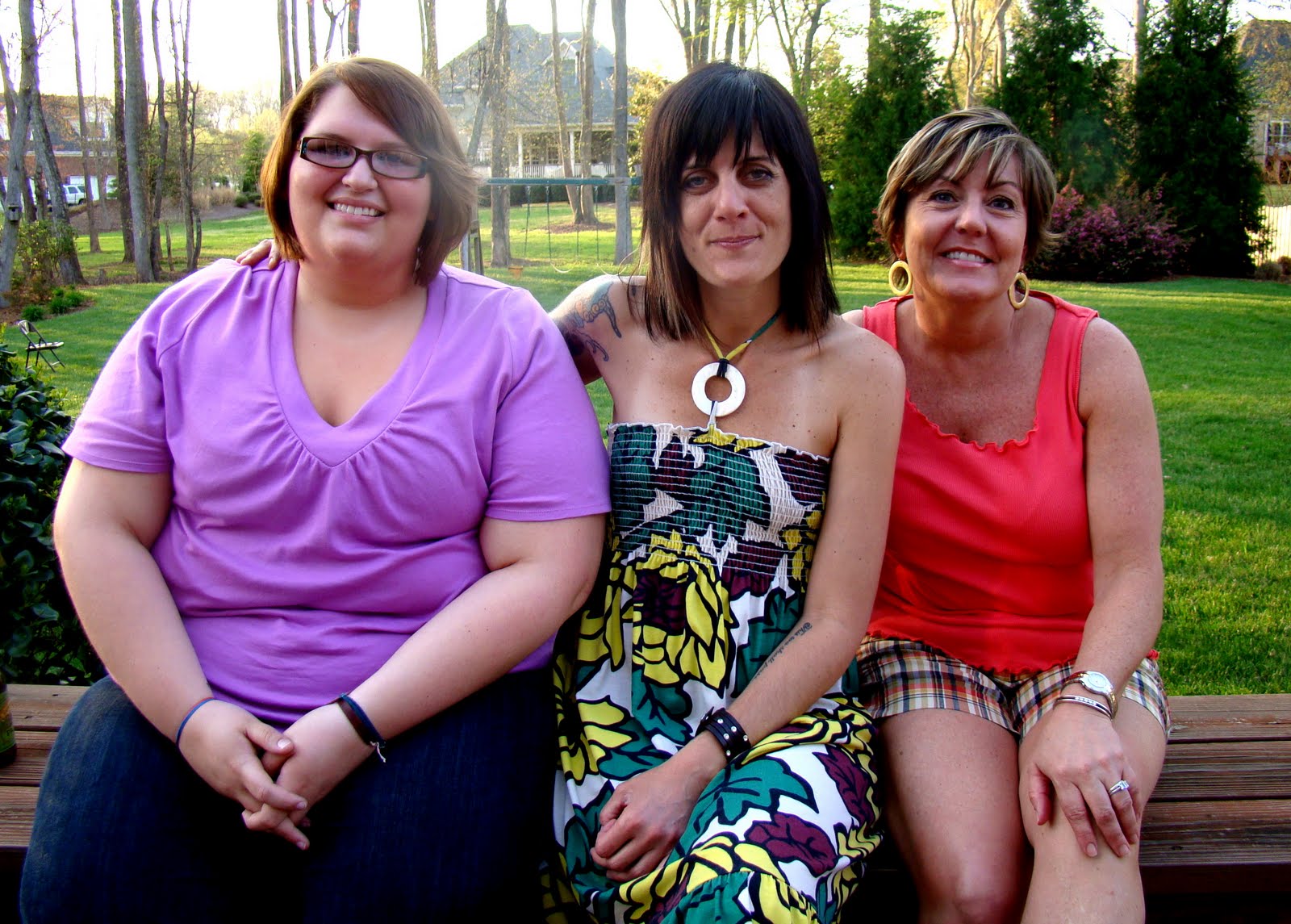 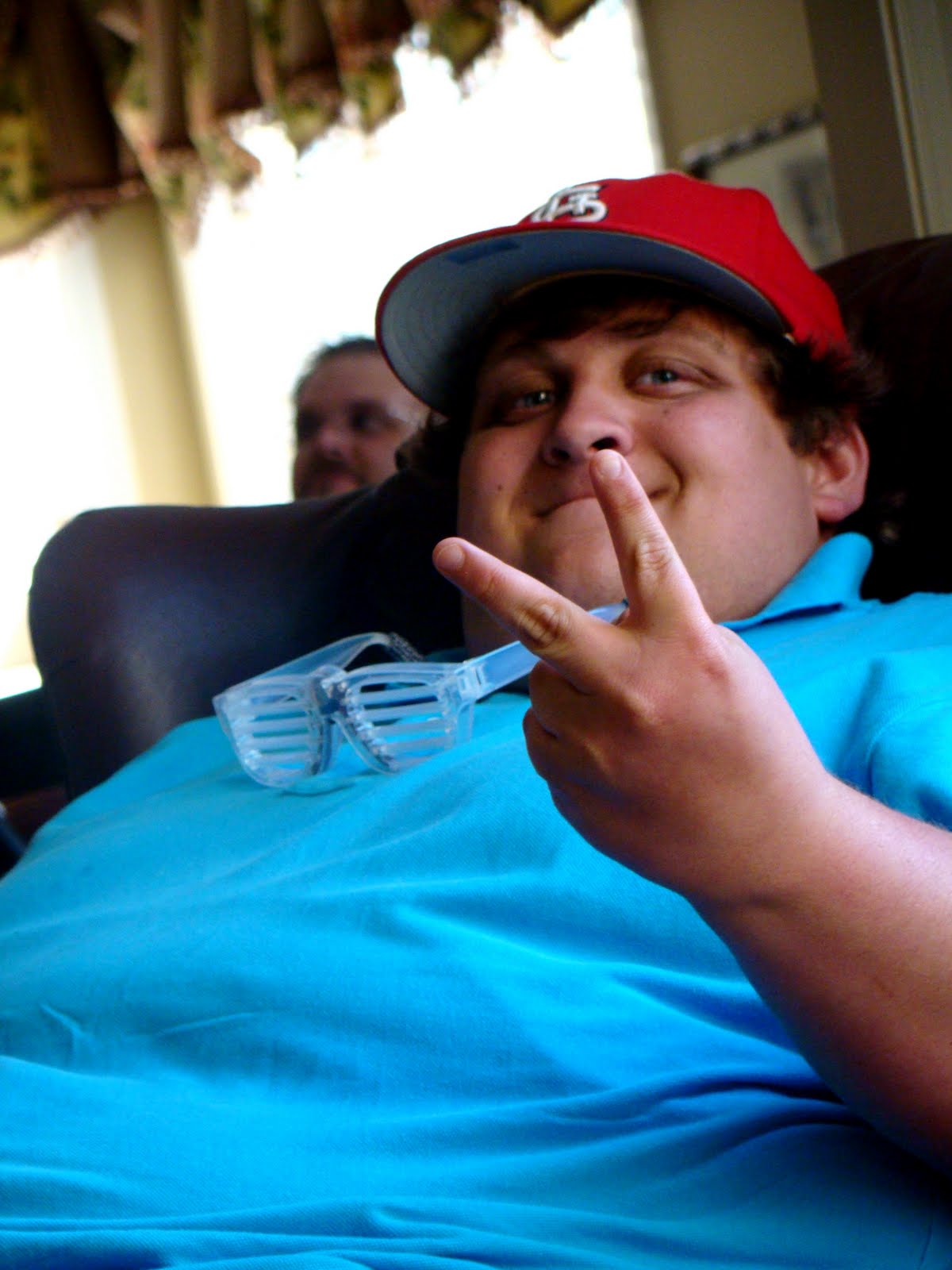 Of course I’ve gone on and on about Suzanne but failed to get a picture of her!

Aunt Cheryl with me! 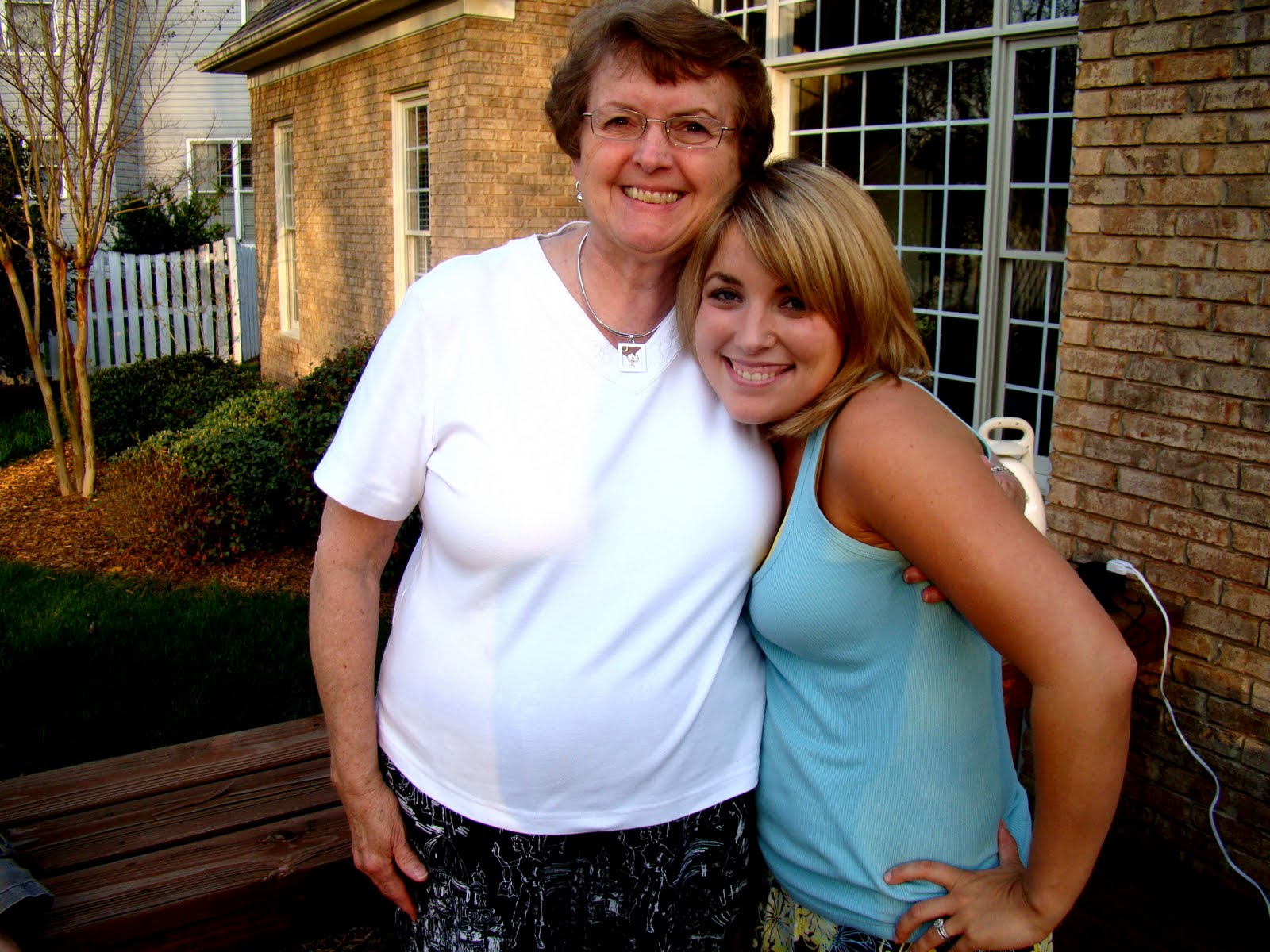 All in all it was such a blessing to get to spend so much quality time with my family. Our original plan was to still go to Melbourne for Easter then leave from there on Sunday to get up to SC for the funeral on Monday then turn around and come home. I’m SO glad we changed the plans and that we went up on Saturday instead. I wouldn’t trade that time with my family for anything! It meant a lot to me that I got to be there for Dad and that all of us together could be there for Aunt Cheryl, Laurie, Lisa, and Suzanne. And hey, it was great for ME in my grieving to be surrounded by all of those who knew Uncle Spear best! I KNOW that having us all together and showing support for each other has made him very happy 🙂 I just hope we all make more of an effort to make sure these get-togethers aren’t reserved only for times of sadness!