For my birthday Courtney got me a gift card to get my nails done at the best place in town (Nails by Chris over by Publix). We waited for Casey to be in town before we went so we could all go together! It was hard for me to believe but this night was actually the first time EVER that just the three of us have done something together. We had SUCH a great time that we need to plan nights like these more often, especially now that Casey is back living in town! 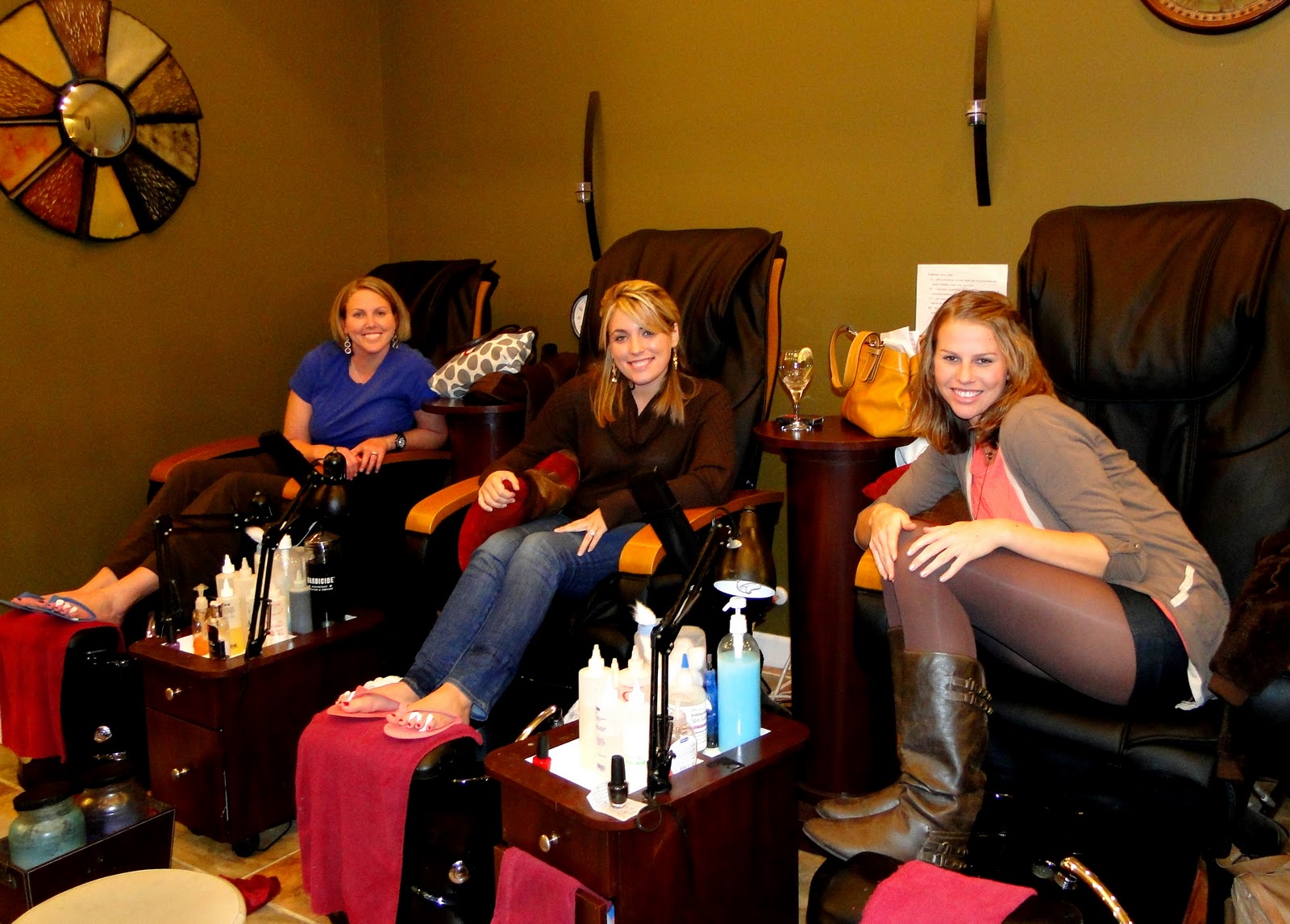 the nail girl must have a night job as a photographer – she snapped a million pics! 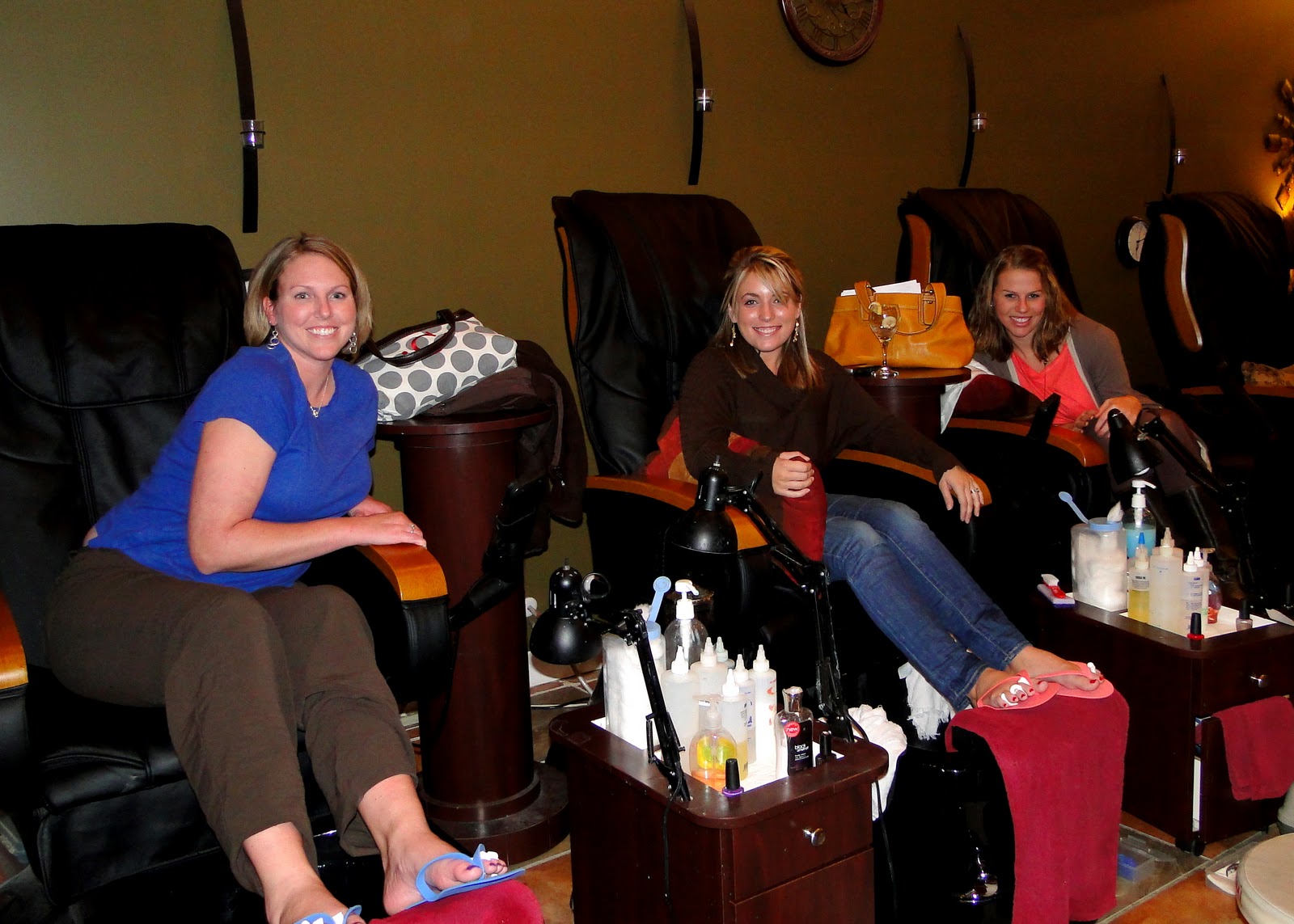 Of course, the people who worked there knew the family somehow (I think one of their kids went to Courtney’s school or something???) so she hooked us up by offering to paint designs on our toes. I guess you’d call that a “hook up”? Not really sure…but I was feeling festive so I got Christmas trees! 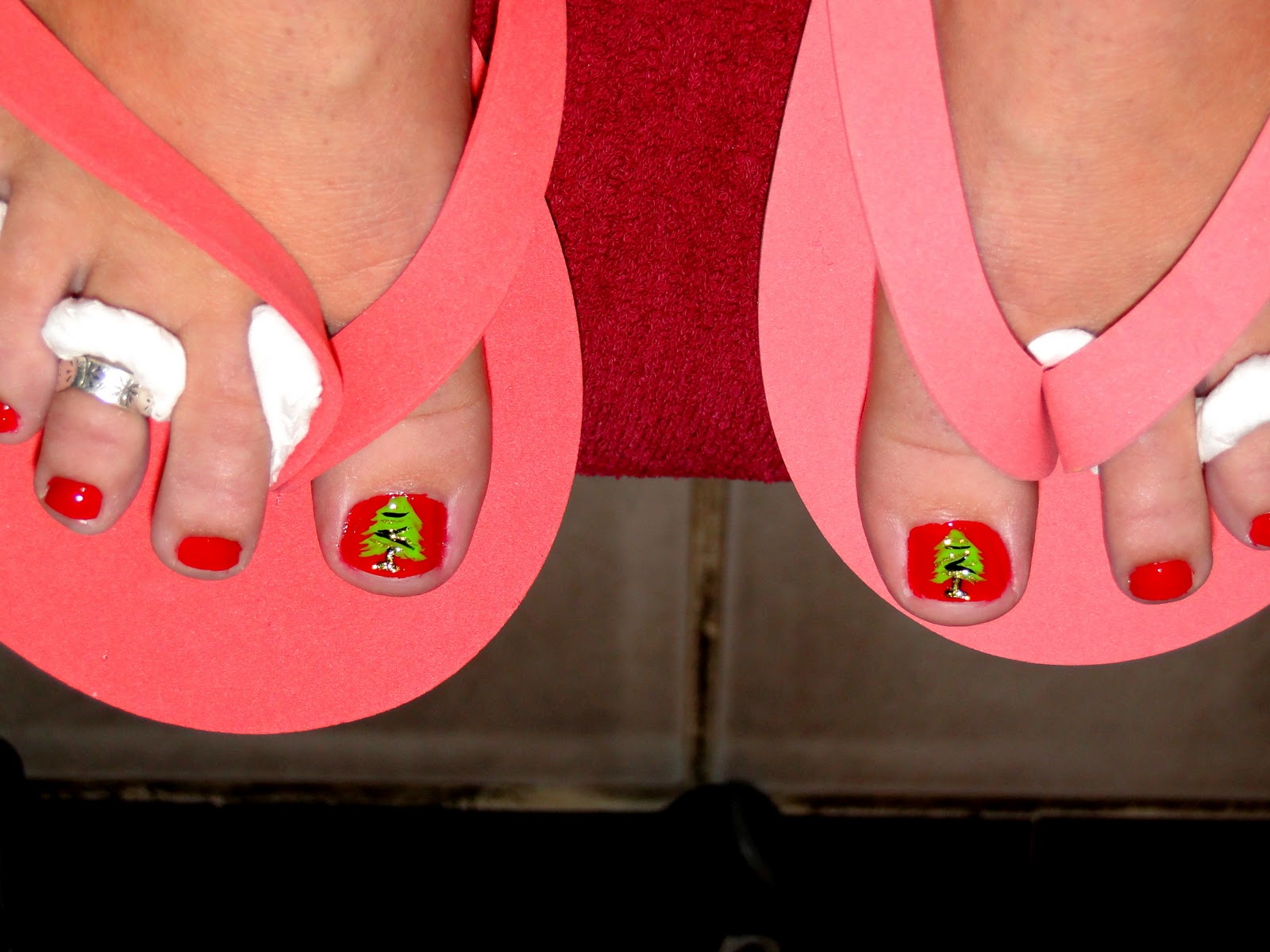 After we did our nails we headed to Old Navy to pick out our matching pjs. Back in November Mom and I went to the Carter’s outlet and saw some cute Christmas pjs so I thought it’d be neat to have the kids all match for Christmas. When I brought them over to Courtney’s we all started joking that everyone should match so we got matching pjs at Old Navy for: me, Courtney and Casey; Mrs. Charlotte and Mom; Zach, Brad and Mr. Rusty! It took FOREVER but we picked out some cool ones (you’ll have to wait for the Christmas morning post to see!!!! Ahhh the torture!)

For dinner we decided to hit up Red Lobster. I LOVE it and Zach doesn’t like to eat their often because he’s not a big seafood person, so it’s a good “girl’s night” place for me 🙂 As we walked in the door I said “let’s see how much free stuff I can get us.” It’s kind of a rush for me to see if I can get hooked up places and I had a good feeling that we’d get some deals, I just didn’t realize it’d be the most free food EVER!!!

Sisters! (Courtney’s sporting the Pave Clover Necklace and she LOVES it) 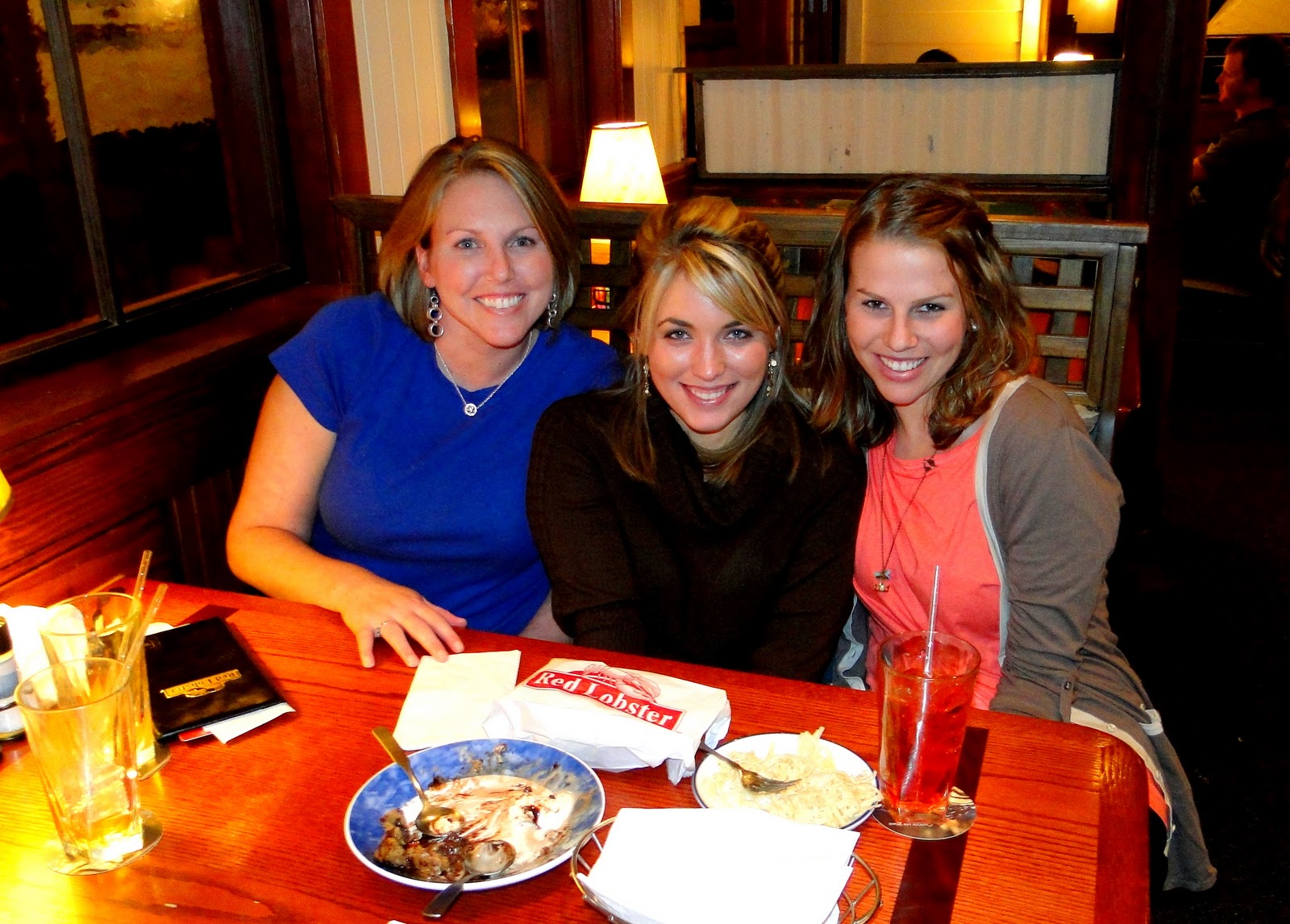 Right when we sat down I did my typical get-a-free-drink routine. I asked how much a Shirley Temple is (I know, I’m not 12 but they are my FAV!) and then our waiter told me it was like $2.75 so I reacted, as anyone would, in shock at the expense. I then said “I guess I’ll have to have water.” And the waiter said “How about I put down water but accidentally give you Shirley Temples?” Bam! All three of us got free drinks. By the end of the evening we got: 3 sodas, 3 salads, 2 cups of lobster bisque, shrimp linguine, a yummy cookie ice cream dessert, and rolls and drinks to go and our total bill was only $14.00!!! We only paid for the linguine! Isn’t that awesome?!?! I’m free for a night out anytime you want to bring me along to help you get some free stuff 😉

Our waiter, Brad, called over the manager to take a picture of all of us for me (we HAD to get a pic with this kid!) and I made sure to tell the manager that he was our BEST waiter EVER (which is true, he really was) so the manager ended up giving HIM a free meal for making us so happy 🙂 See…everybody wins 😉 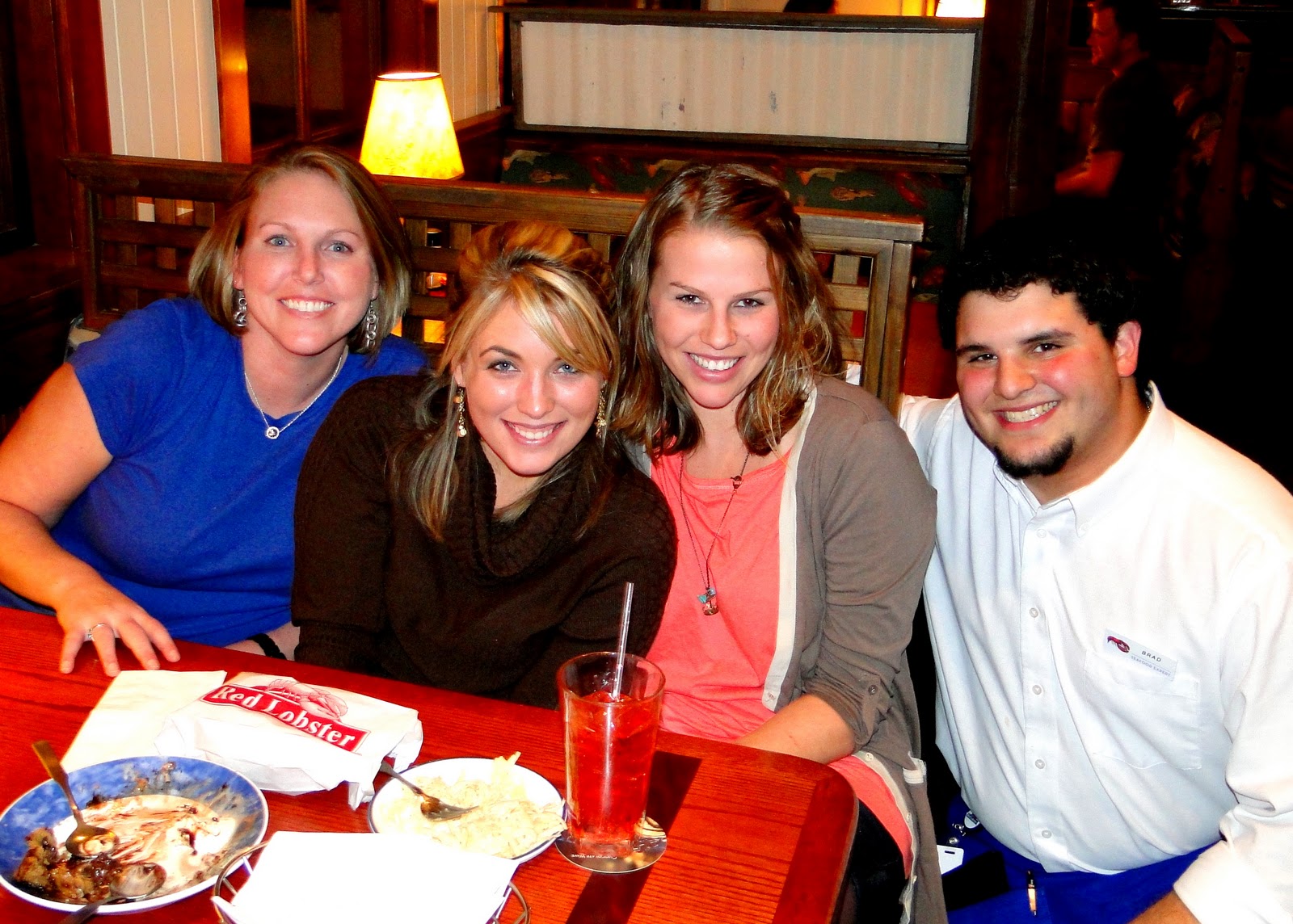 What’s even funnier is that Brad totally wrote down his name on a piece of paper and told me to Facebook him!!! I’m much to old to have ever been told to “facebook” anyone so this cracked me up. Btw, I did look him up and he’s a freshman in college with a girlfriend haha. FYI I did not, however, friend him. No need for him to know that I’m closing in on 30 with a hubby (who is much hotter than this kid btw) and a baby right? I mean I may want some more free stuff sometime and don’t wanna damage my image 😉

It was a great night and super fun! I hope the three of us can do things like this more often as it makes for both excellent bonding time and fun memories.