Our plan was to leave from the Aflac Kick-Off then head home (2 1/2 hours) get Kye and drive to Melbourne (4 hours). Well the plans changed! After all that driving Zach was exhausted and we decided to just leave Saturday morning. It worked out great and we got to Melbourne a little before 11. It gave Mom and I enough time to get the food and all ready for the shower!

Here are the invites I had made for it, didn’t they turn out cute? 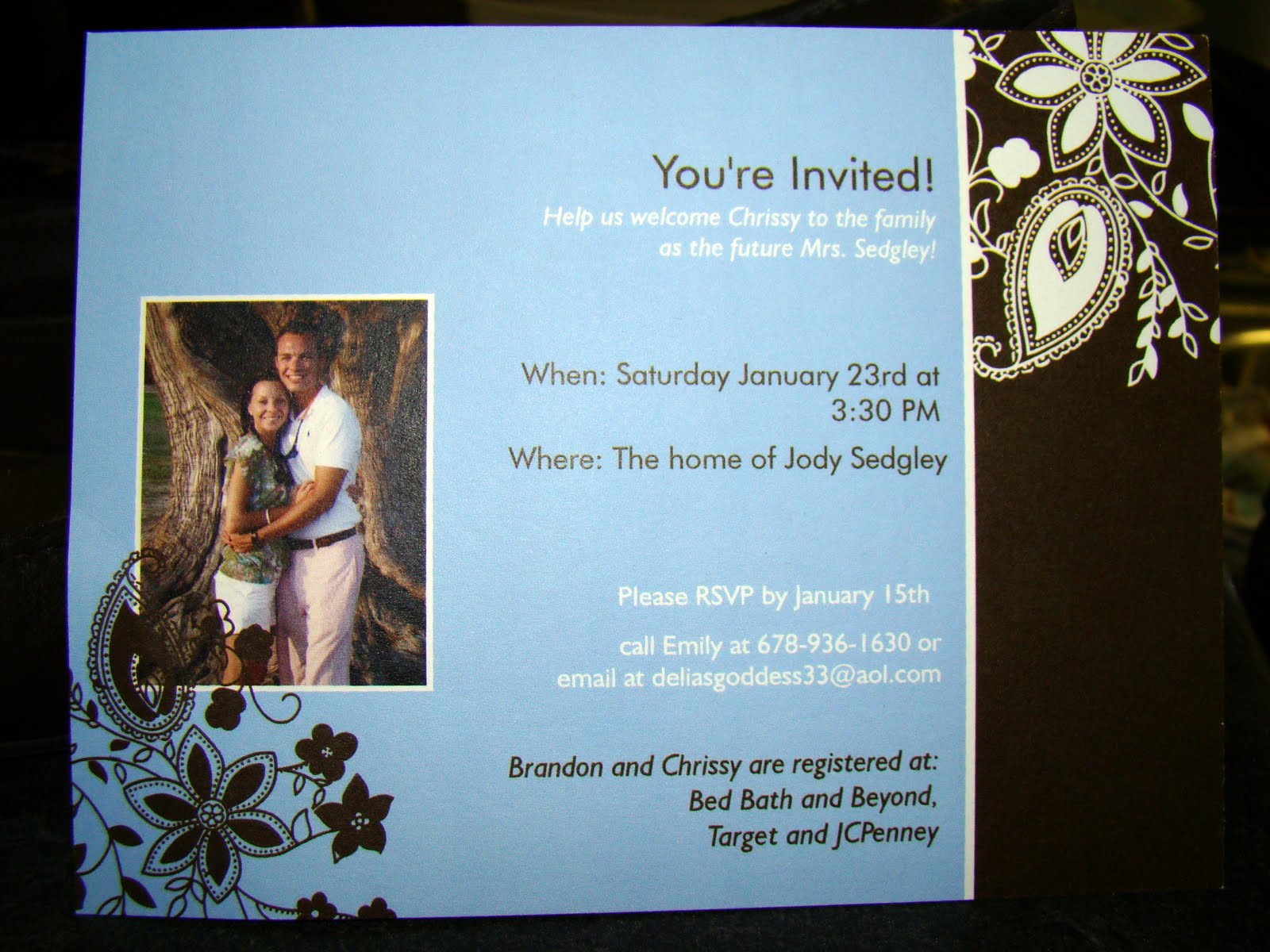 I was excited to be hosting a family shower for Chrissy. I really wanted to let our family have a chance to get to know Chrissy a little better before the wedding in March! I invited both sides of the family but I know a lot of Dad’s family is all spread out so they couldn’t make it. We still had a good turn out though and a great time!

Before everyone got there Chrissy gave me my bridesmaid gift! She was planning on giving it to me at the Bachelorette Party but I’m not going (it’s a 3 hour 20 min drive for me and since I don’t do the club/party/drinking thing I’ll just be a Debbie Downer for sure!) so she gave me mine early! I liked everything she got for me…but I can’t show any pictures since the other bridesmaids haven’t gotten theirs yet! 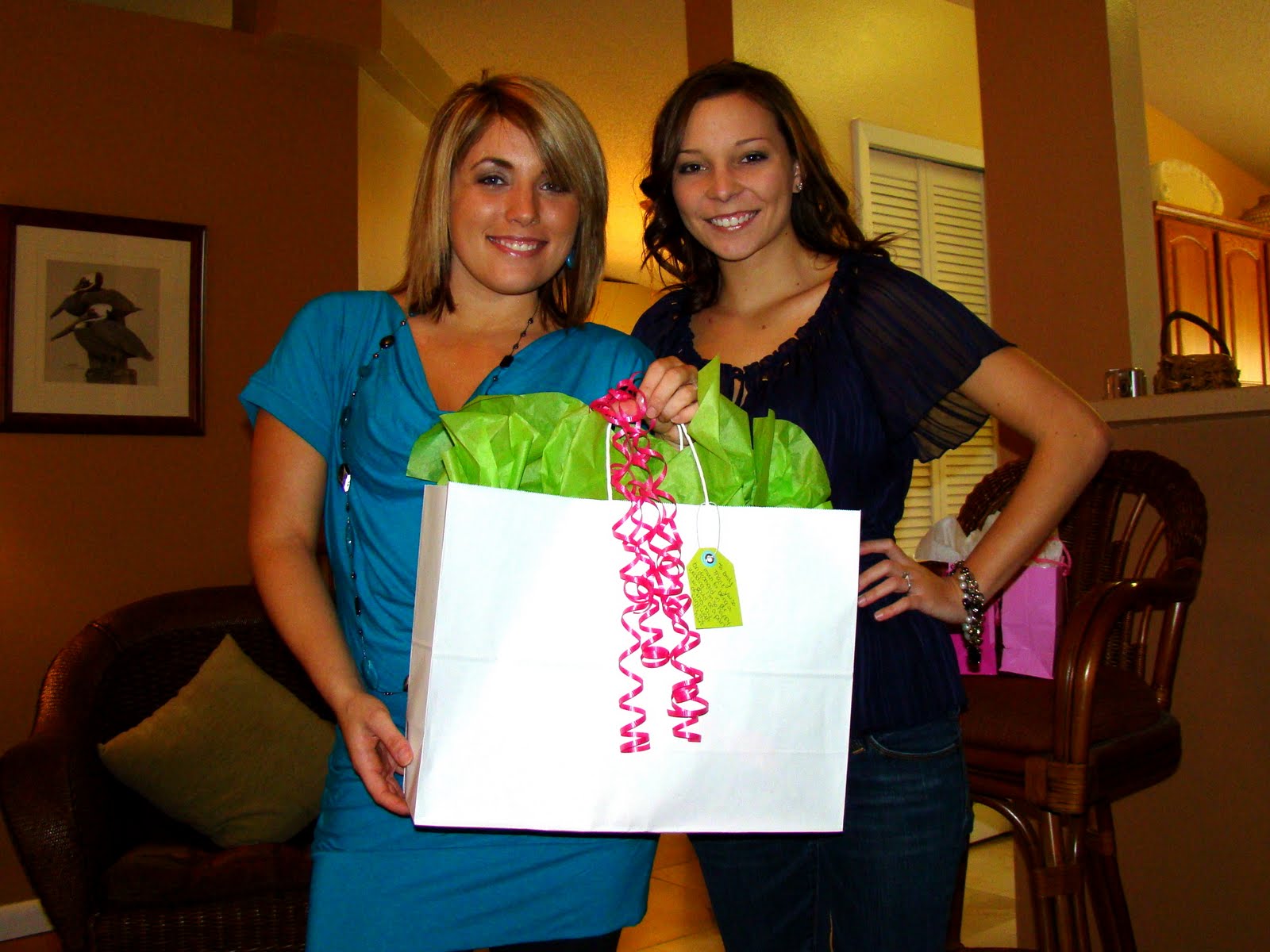 For Christmas Brandon got Chrissy a really cute (and handy!) purse hanging thing that you can put on a table or something and it gives you a spot to hang your purse. Mom and I loved it and so Chrissy got us each one to thank us for hosting the shower! I was pretty pumped about it 🙂 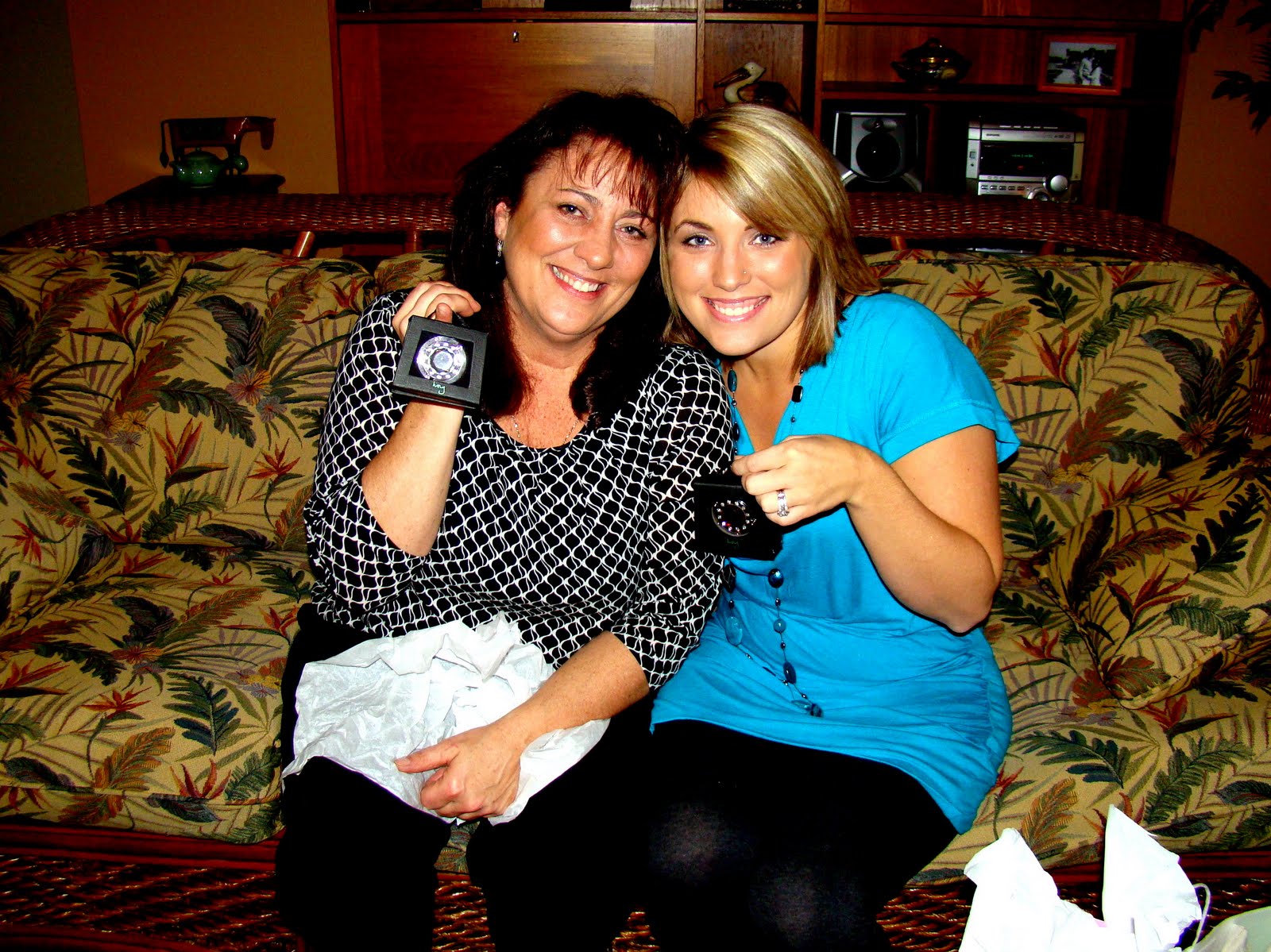 The hostesses and Bride! 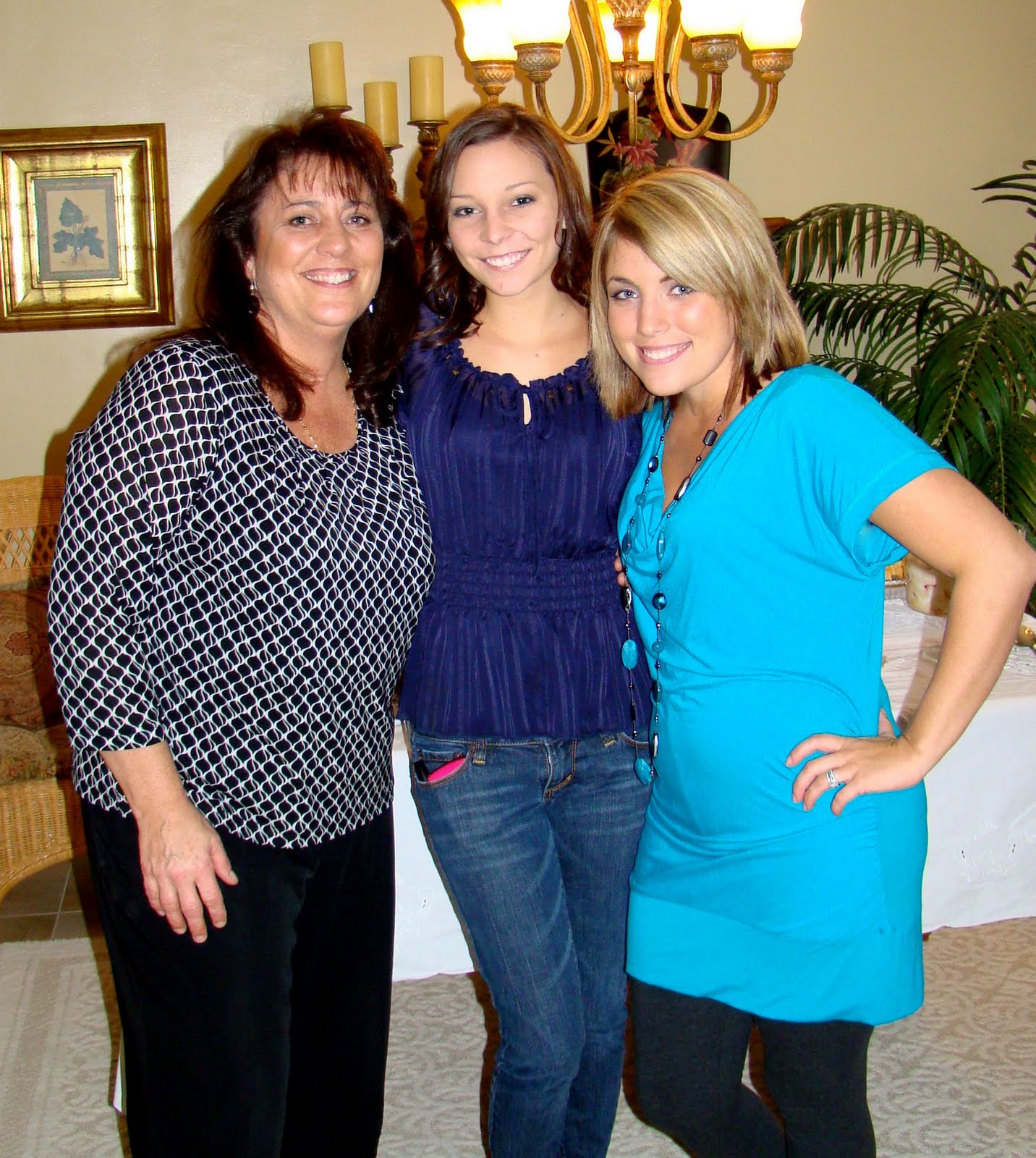 I think it was some of the BEST food I’ve ever had at a shower! Everyone kept saying how yummy everything was which made us feel good 🙂 I made a strawberry layered cake and some adorable bread cut-outs with a spread on them. Mom made a salsa and meatballs! It all looked so pretty! 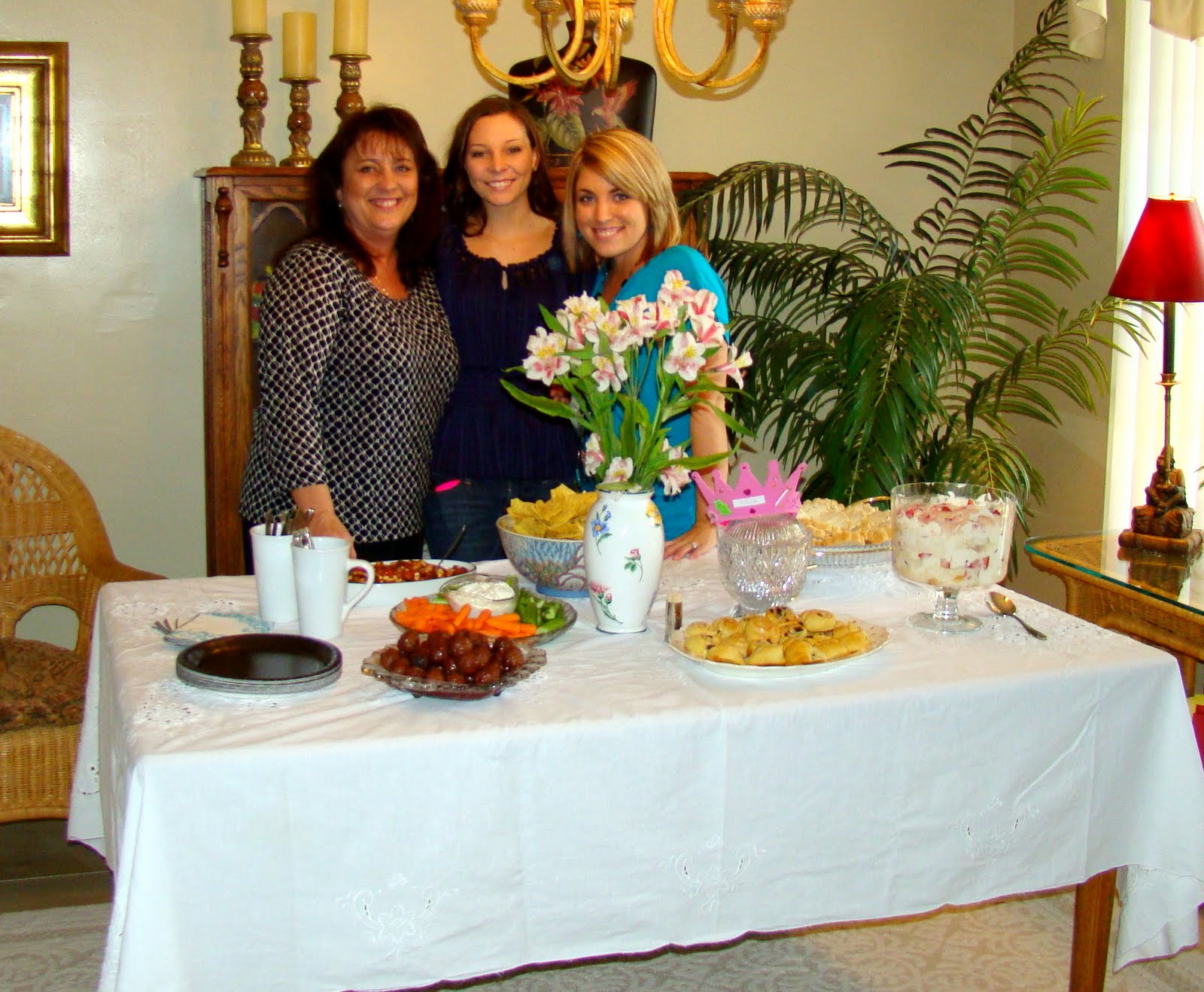 I love Shower Games…I think it’s the whole point of a shower! haha. We played a game where everyone had to answer questions about Chrissy to see who knew her the best (of course most of us are still getting to know her so it was great to hear her answers!). We also played Shower Gift Bingo which is always a hit. My little cousin Aiden loved that one!!! I made all the game boards with blue computer paper and a brown paisley stamp, aren’t they cute? 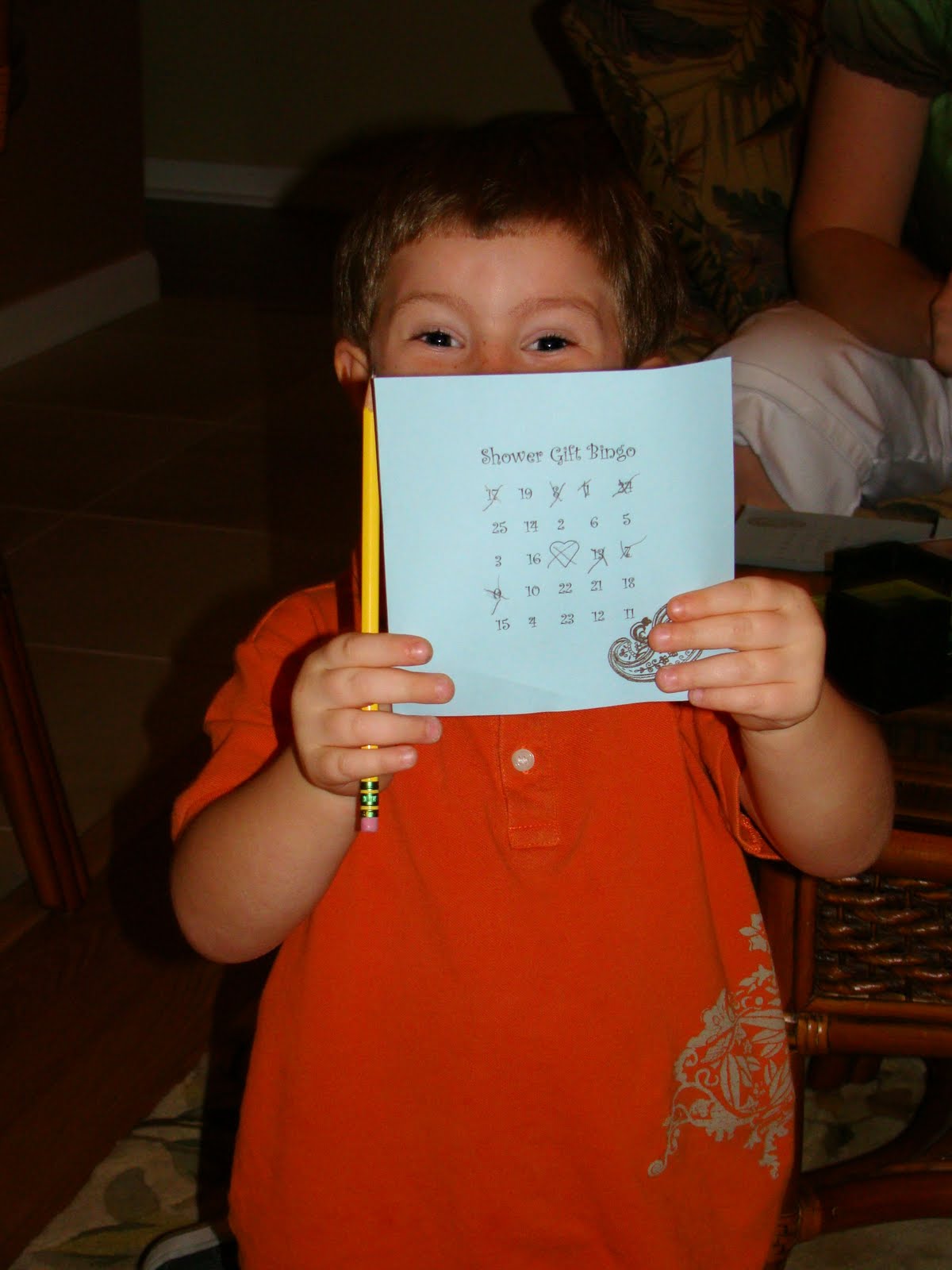 Of course no bridal shower is complete without a round of the Toilet Paper Bride game! Sabrina and Caylin made perfect brides and everyone had a good time covering them in beautiful wrapping paper dresses! 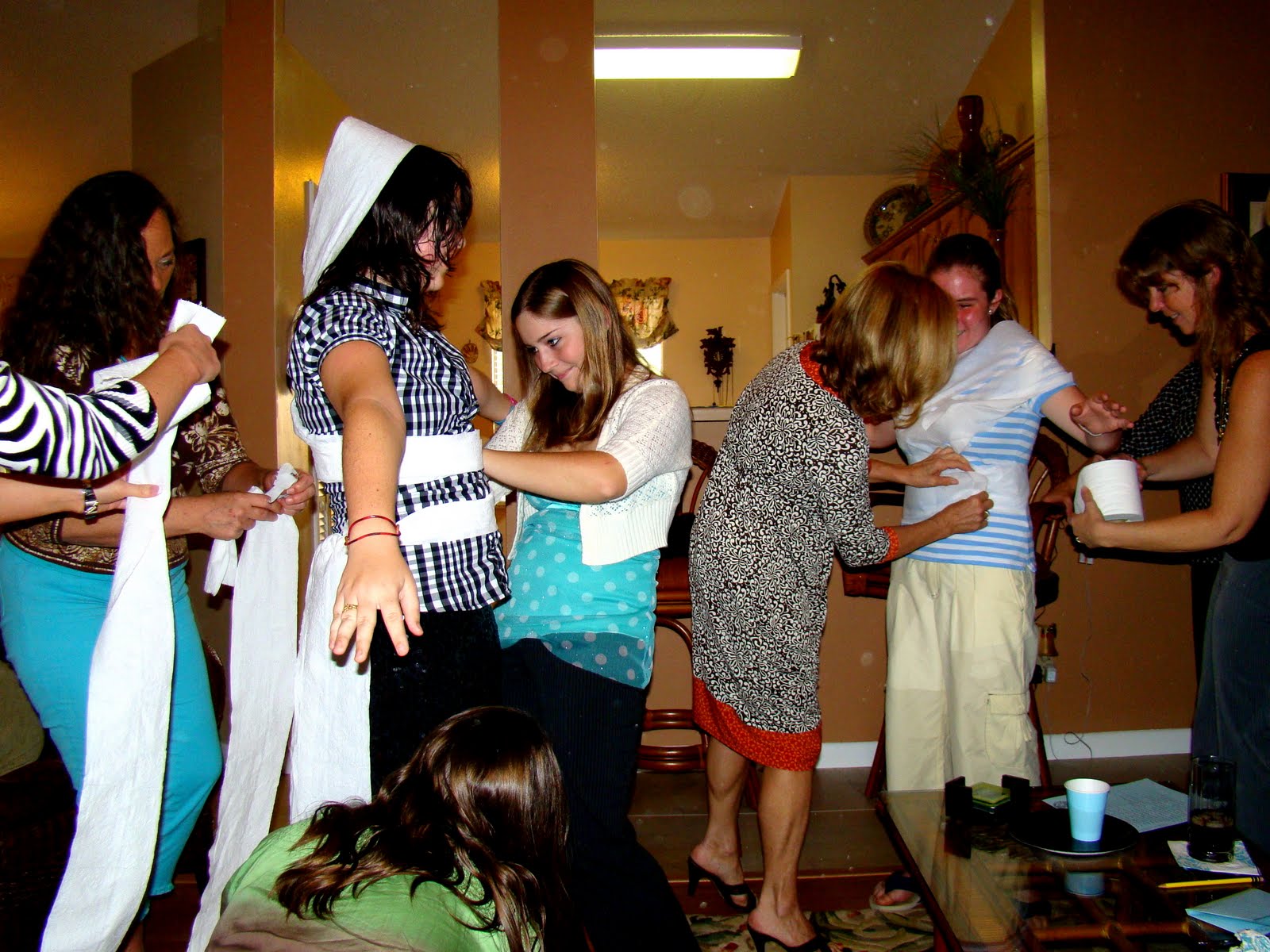 Caylin actually wrapped HERSELF in the toilet paper haha. The finished products! 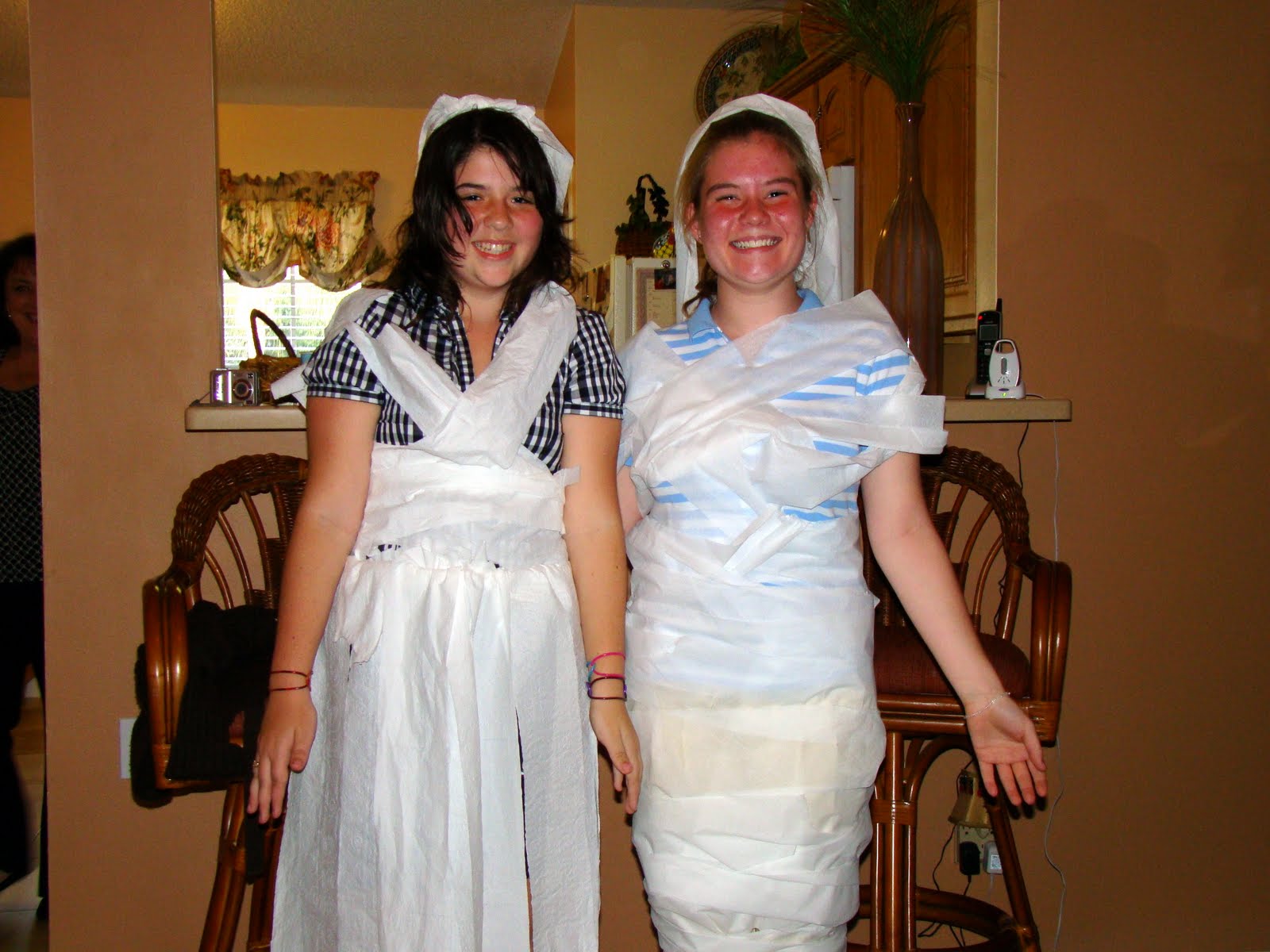 Everyone was so generous when it came to the gift-giving. Brandon and Chrissy are stocked up now for sure! And they got so many things off their registry! 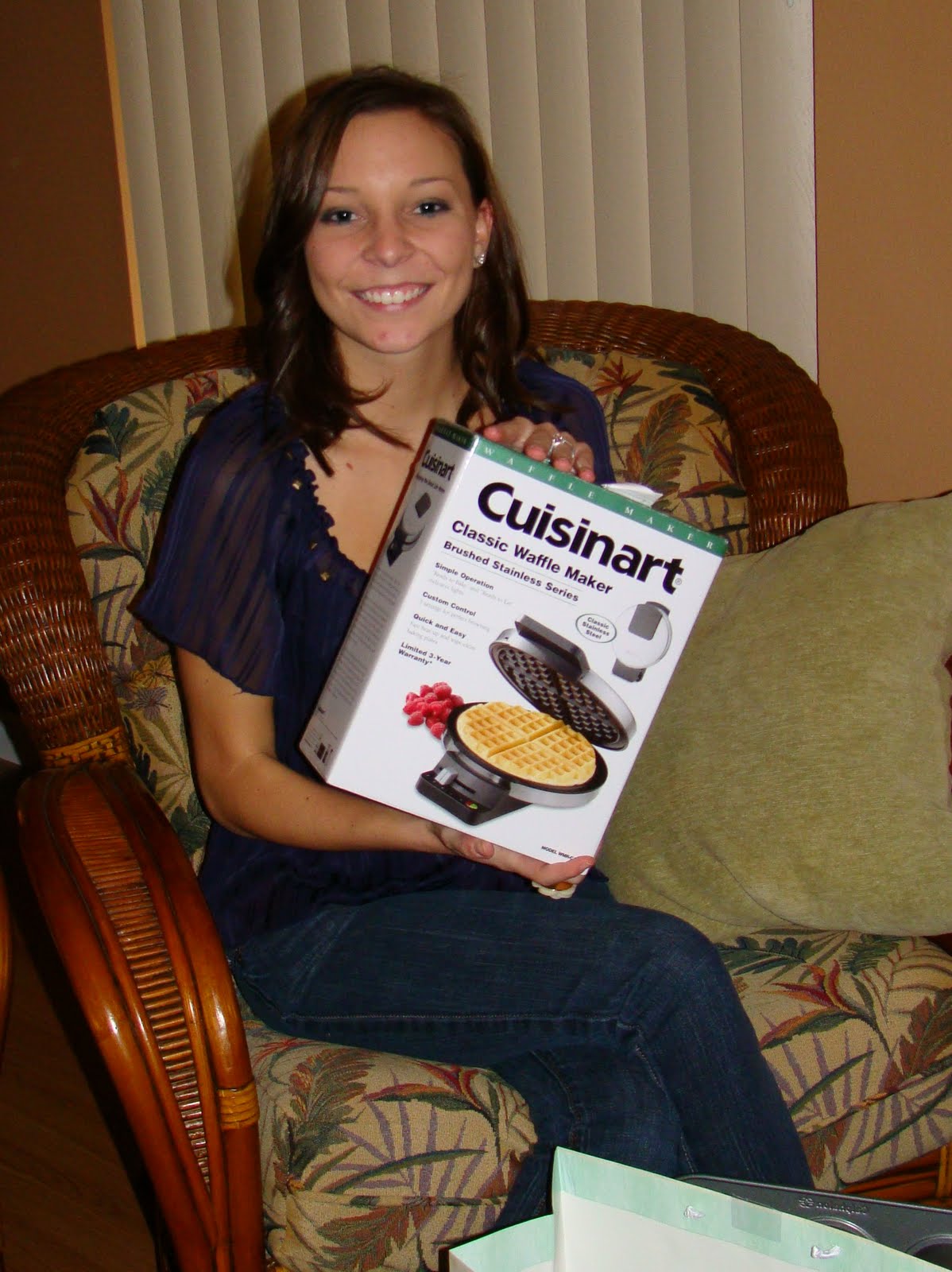 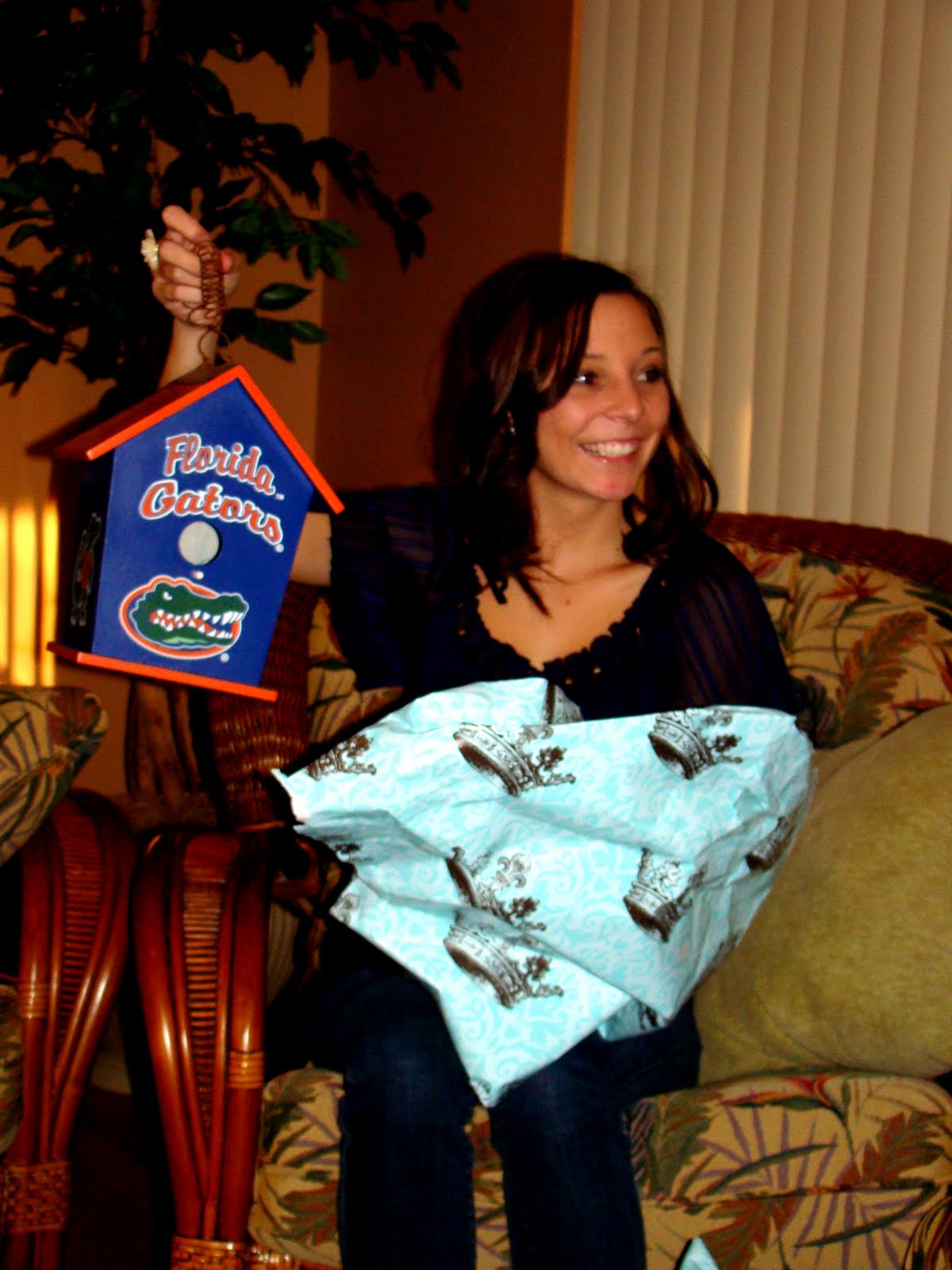 I had to get her somethin’ sexy 😉 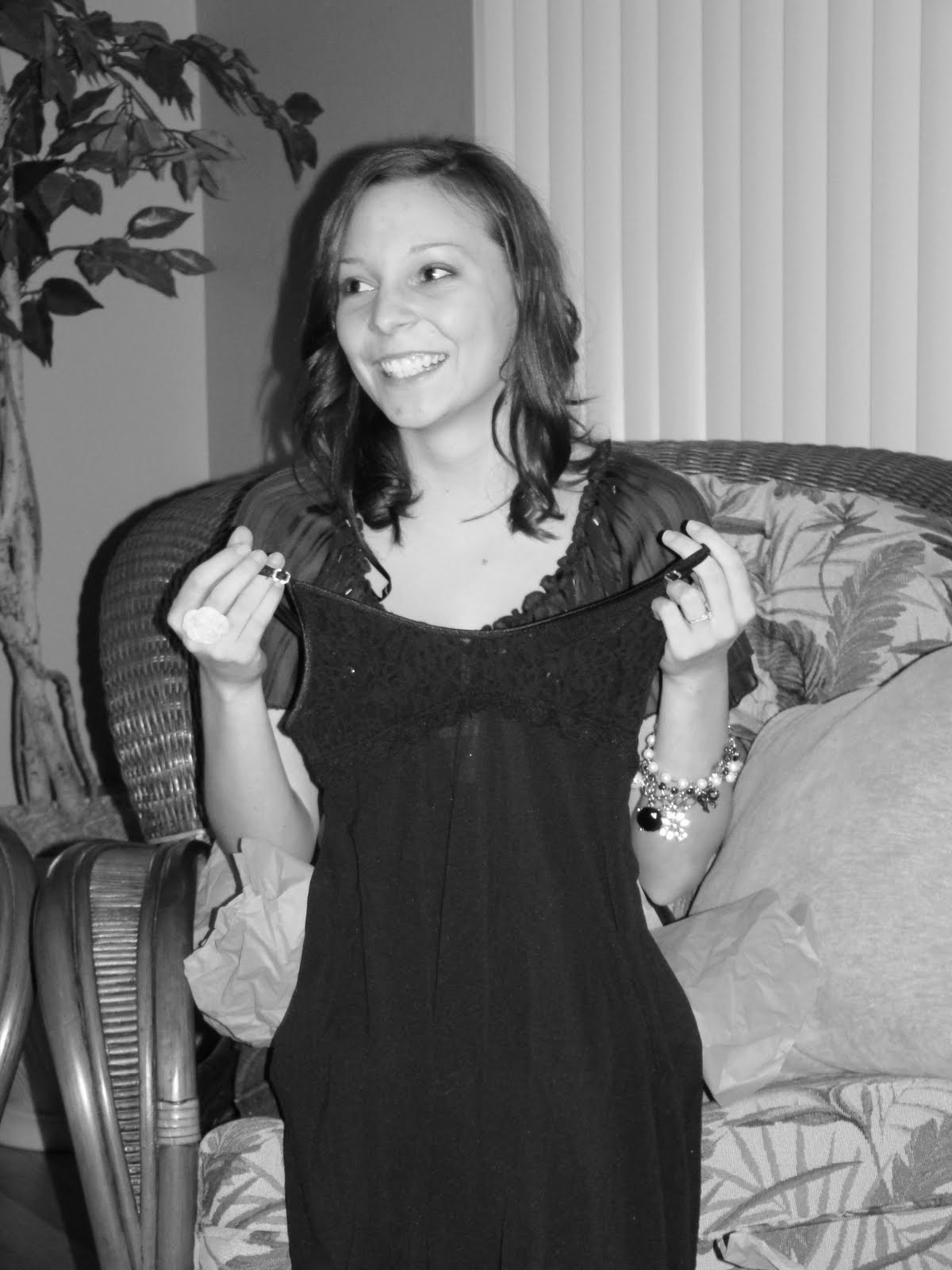 Susi was in charge of making the bow bouquet It was another successful shower for sure! It started at 3:30 and everyone stuck around until after 6 just talking and enjoying being together. After everyone left Chrissy tried on her wedding gown which was exciting! It was fun having Cassandra, the maid of honor, there with us as I think she’s AWESOME and if she lived closer I totally know we’d be super good friends! The next morning Zach and I headed out. He did put some finishing touches on Mom’s bathroom and it looks AMAZING! I need to get some pictures of it for sure 🙂 It was a VERY short weekend but I’m so glad we were able to give Chrissy such a nice wedding shower!