Today I’m linking up with Momfessionals for Show and Tell Tuesday and the topic is PROM! I thought I’d blogged about prom before but I searched and searched and never did find the post so I must have just imagined it 😉

I’m not sure how others schools do their prom but for ours the juniors host the seniors. So we planned our junior prom and the class behind us planned our senior prom.

I met my high school boyfriend, Mark, during our sophomore year and he was my date for every dance I attended (2 homecomings and both proms). Junior year we were basically wrapped up in each other. We didn’t have a lot of friendships outside of US. Which looking back I’m sure he’d agree that we should have had a better balance of our relationship and friendships. I’m thankful I have a MUCH better balance now in married life 🙂 Friends are important yall!

It was tradition at our school for everyone to get their dance photos taken at the courthouse downtown. We re-visited it on our 10 year reunion and it hasn’t changed much! Even though we didn’t go with a group and totally did our own thing for the dance, we still met up there for pics! 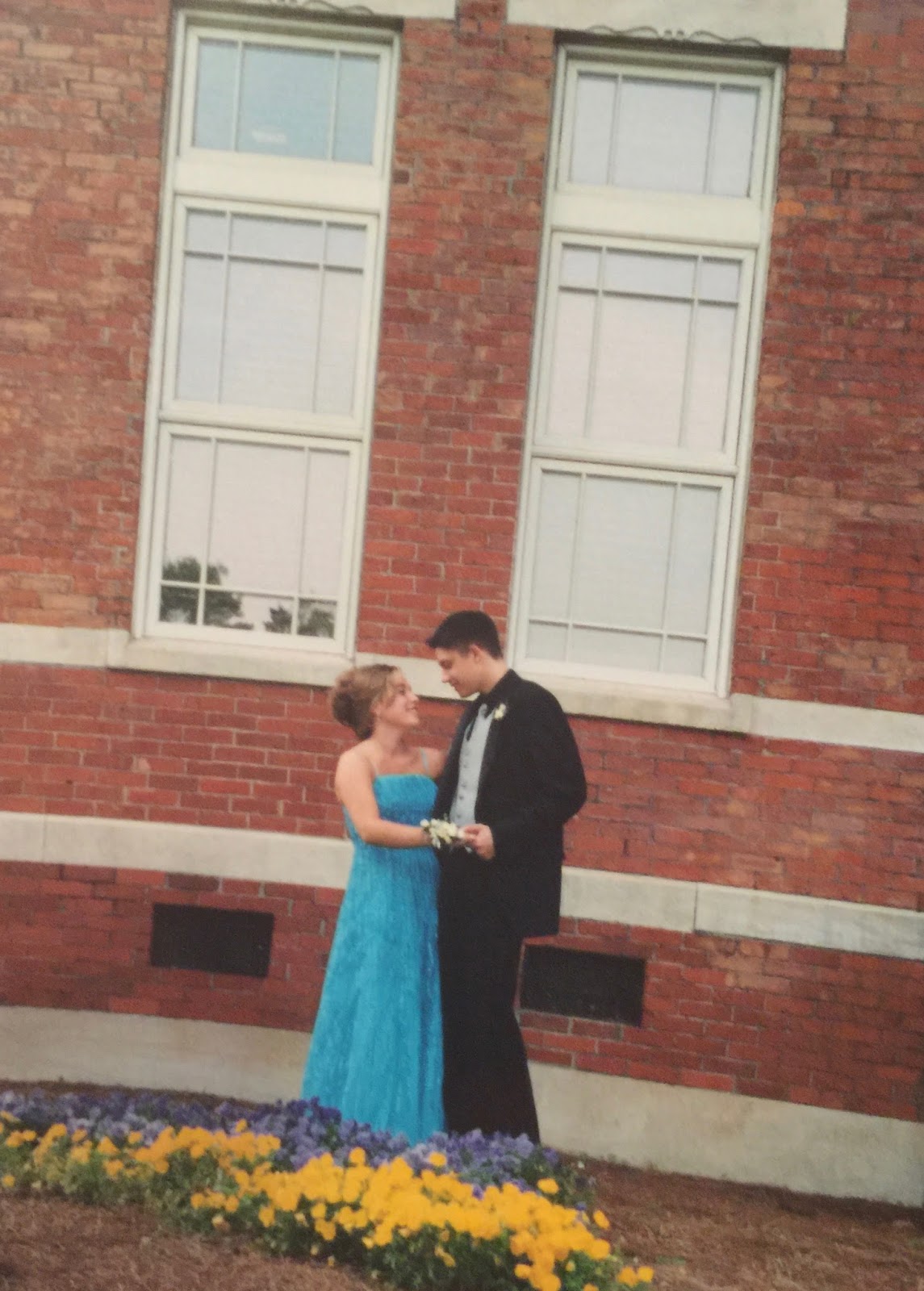 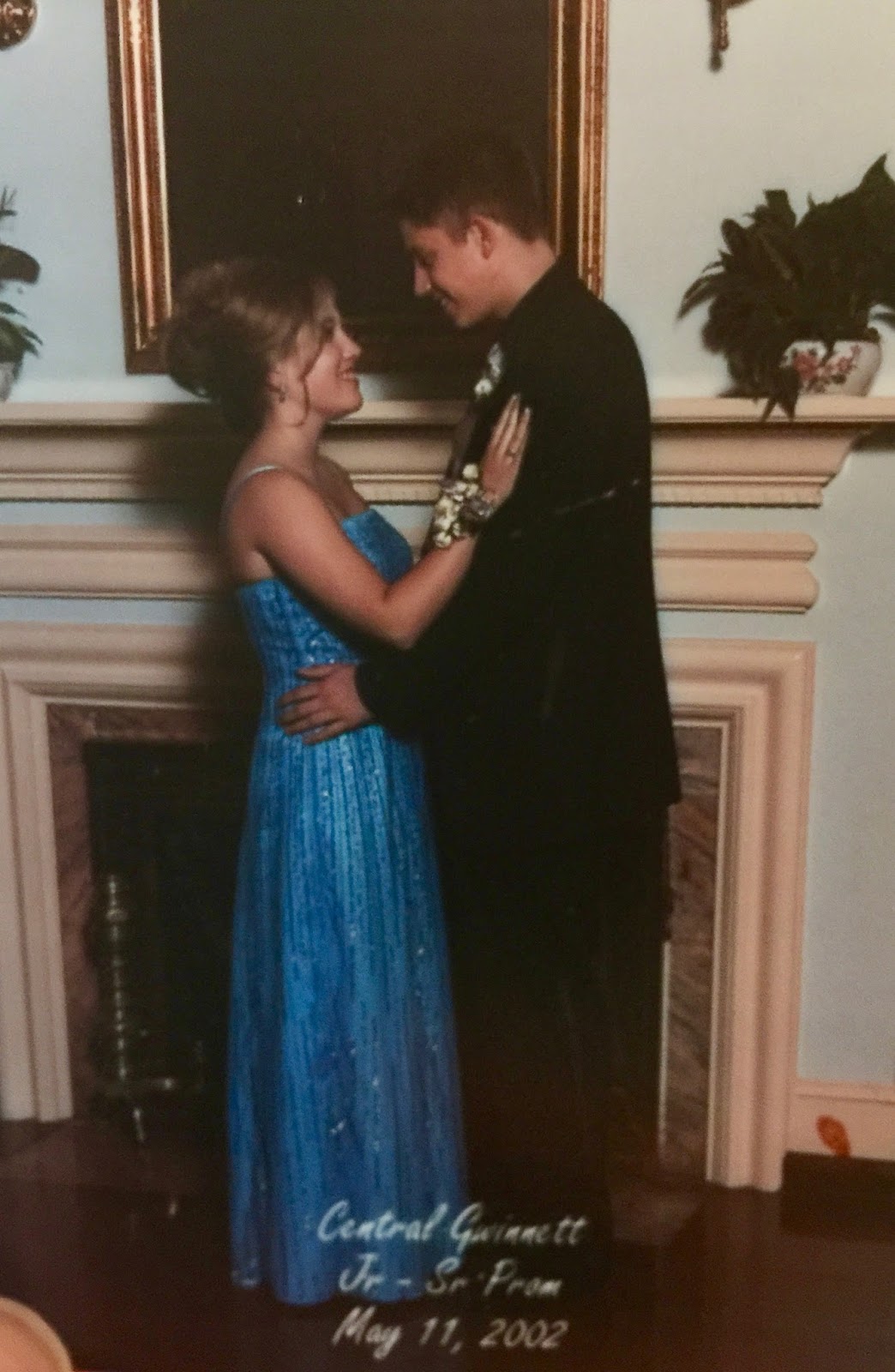 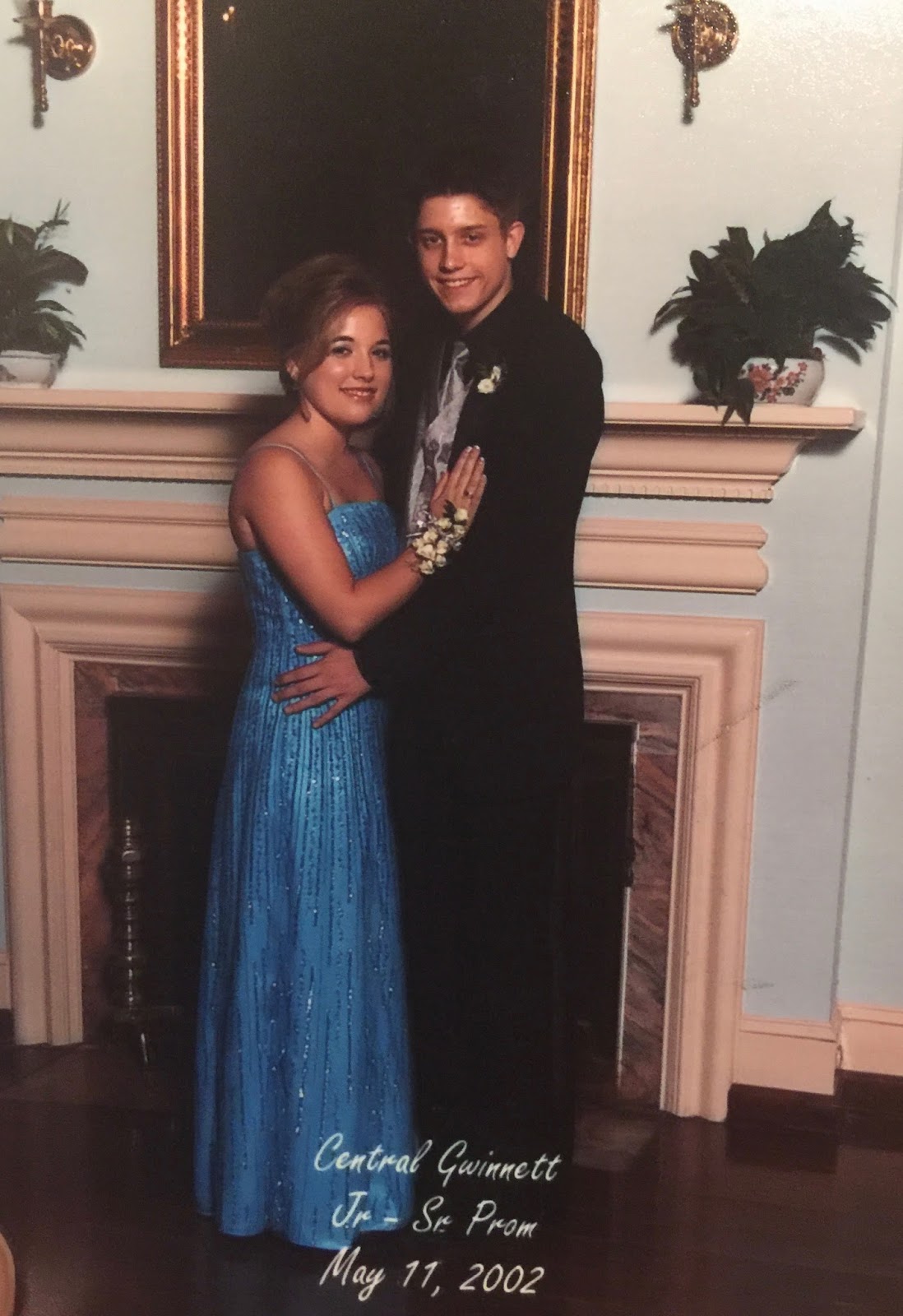 I cannot remember the exact deal my dad made with us but it was something where he ended up chauffeuring us around for the night. After the courthouse for pics we went to the Sundial Restaurant which is in downtown Atlanta and is a revolving restaurant where you can see beautiful views of the city. I know Dad didn’t eat with us so I’m not sure what he did while we ate but then he drove us to prom and again waited around for us to be done. I know we could both drive at that point so I’m not sure why this all went down the way it did? It’s not like we partied or drank or would have a reason to be unable to drive ourselves?

The only conclusion I can come up with is that Dad was acting as a “limo driver” for us since so many people did get limos for the dances and instead of the cost of the limo he instead paid for our hotel room. Yes. We had a fancy hotel room at the Westin in Atlanta for Junior Prom. At the time that didn’t seem weird AT ALL. It wasn’t weird that my dad got us the room or that he drove us there and checked us in or that he picked us up the next morning. I was brought up much differently than most of my friends I know and I know I won’t be offering up any hotel rooms to my teenagers and their boyfriends or girlfriends haha BUT I will say that I do appreciate the open communication I always had with my dad and that things weren’t ever awkward or weird and I DO hope to raise my kids to also feel comfortable with me (while still having much more defined boundaries and while obviously following God’s will for their lives).

I’m also not sure how exactly I will handle telling my kids about my life before I got to know Christ. I am thankful I wasn’t some crazy wild teen but I’m also thankful that I was broken enough to fully understand just what Christ did for me when he died on that cross. I’m thankful to be redeemed.

Our junior prom was a BIG DEAL because a girl in our grade had WON a Seventeen Magazine promotion called Rock Your Prom. O-Town (yes remember “liquid dreams” I mean what a disgusting song right?) visited our school to do a meet and greet with her and promote the magazine and get photos and such. And then LFO performed at our prom. Yup. I know. Awesome right? They even rode in the limo with the girl who won! I’m pretty sure Mark and I didn’t care about being at the actual dance at all…but who would want to miss LFO? 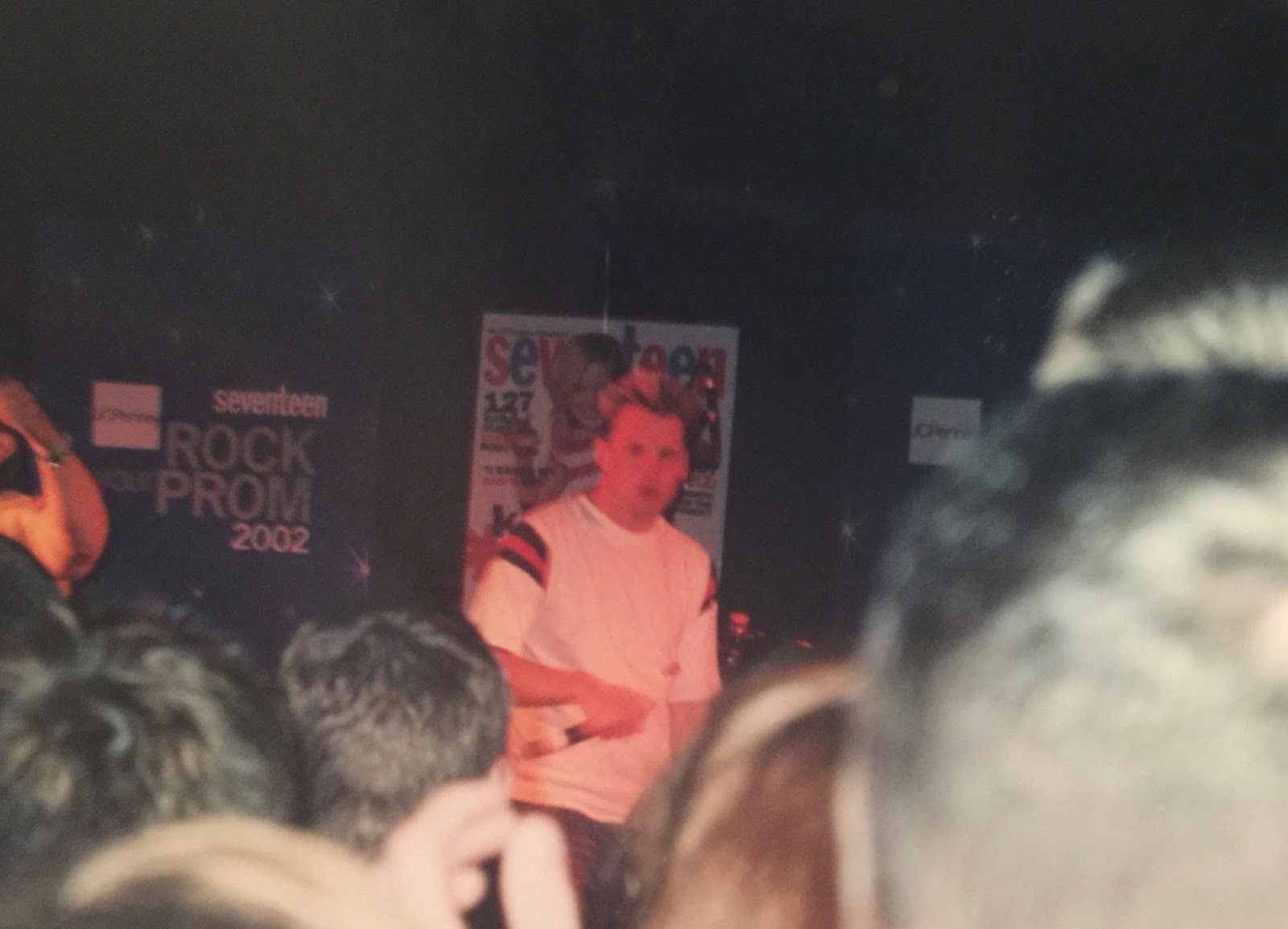 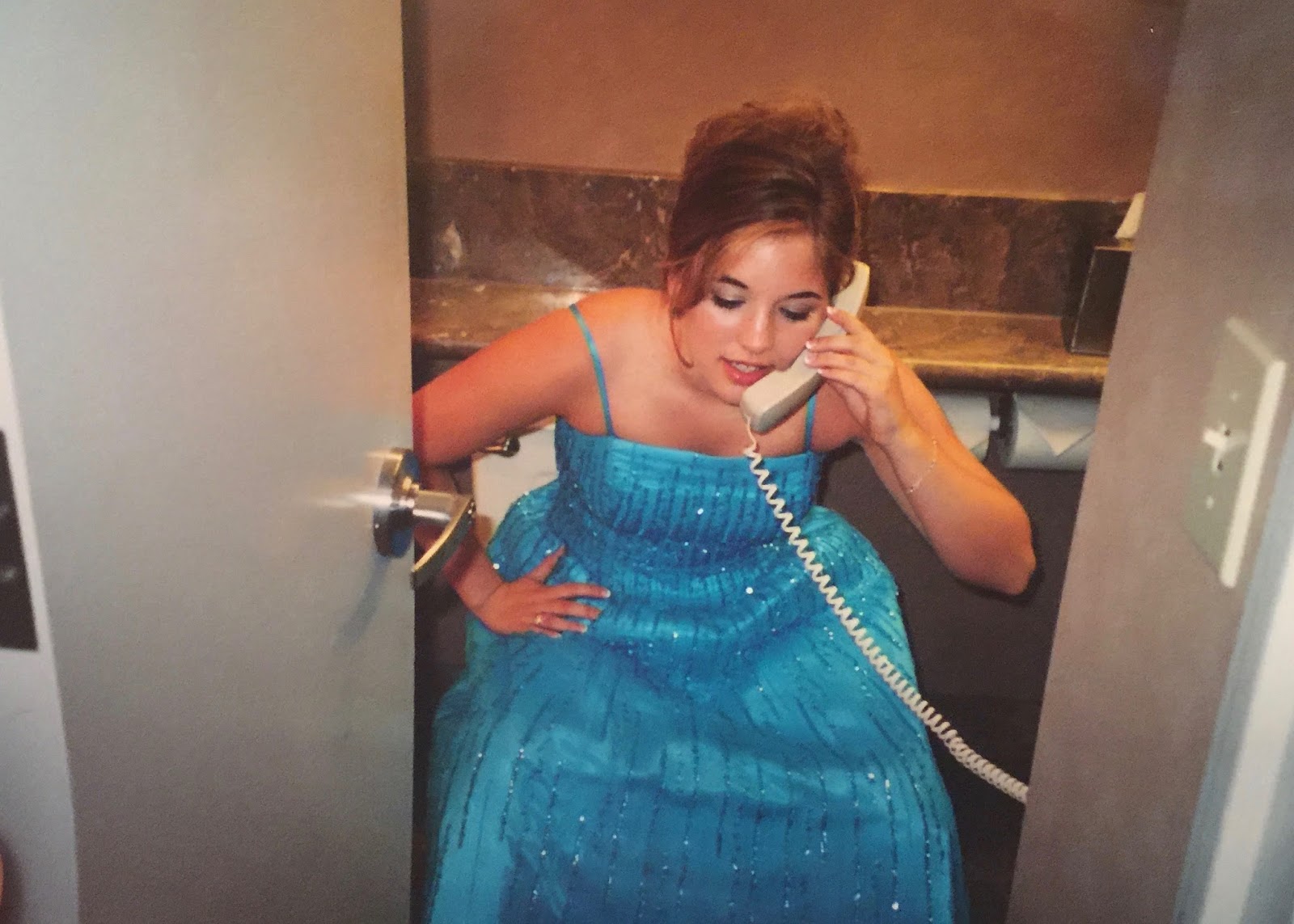 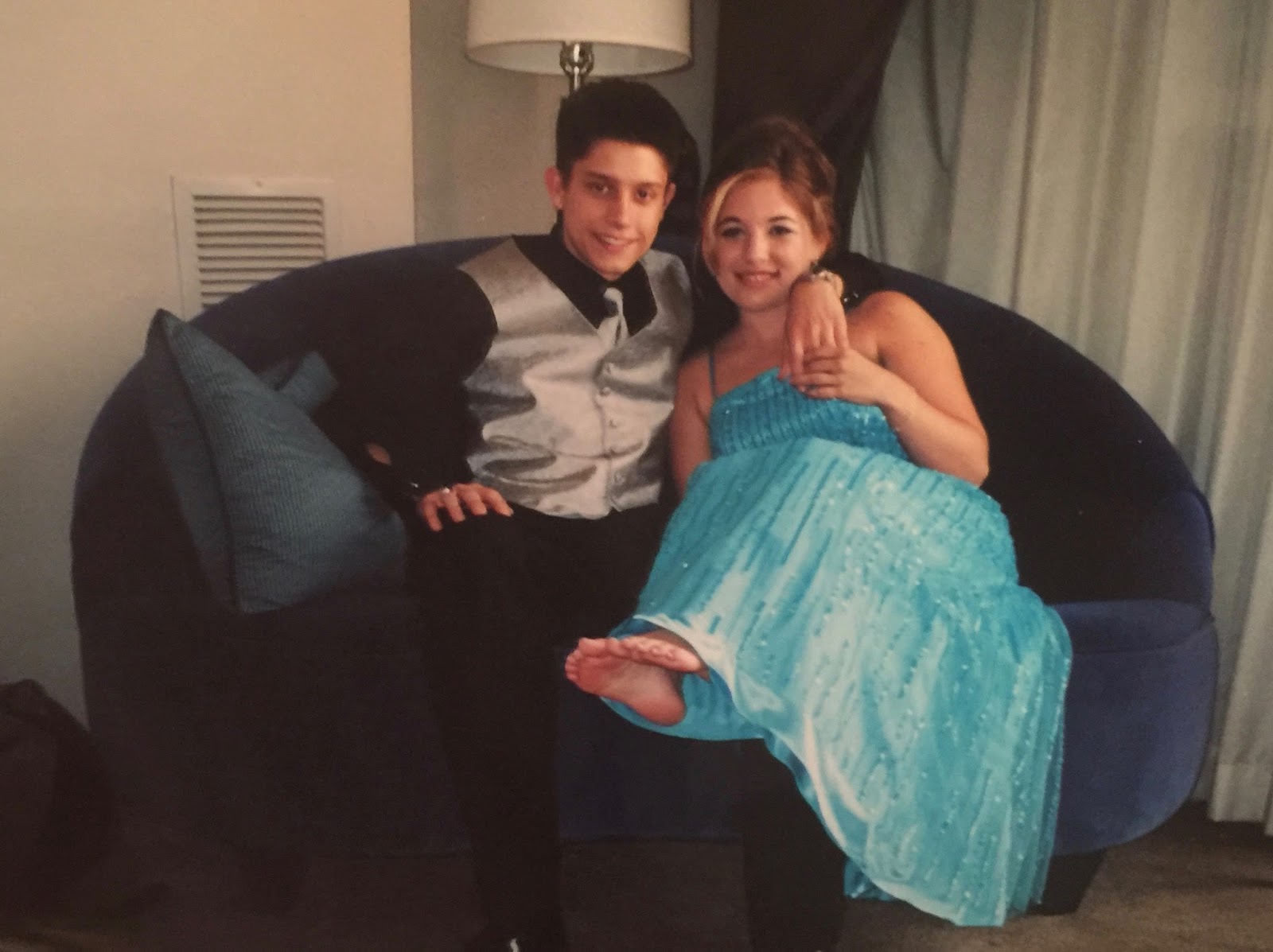 Senior prom was a MUCH bigger deal for me than Junior. Mark and I had broken up that December and I am truly so, so thankful for having the last half of my senior year single (not that I felt that way at the time…I was pretty devastated over the breakup). I grew up with many of the same friends, some even as far back as preschool. Senior year was the end of our time together and I’m SO glad I spent so much time with my friends and with those who had meant so much to me throughout my life (and I’m thankful that so many of them are still a part of my life today…#thankyousocialmedia).

Dad and I went to visit my Aunt Cheryl and her daughter Susanne and the four of us went dress shopping. I may not have been a Christian but I always tended to go for more conservative looks. I thought prom should make you feel like a princess…not a slut 😉 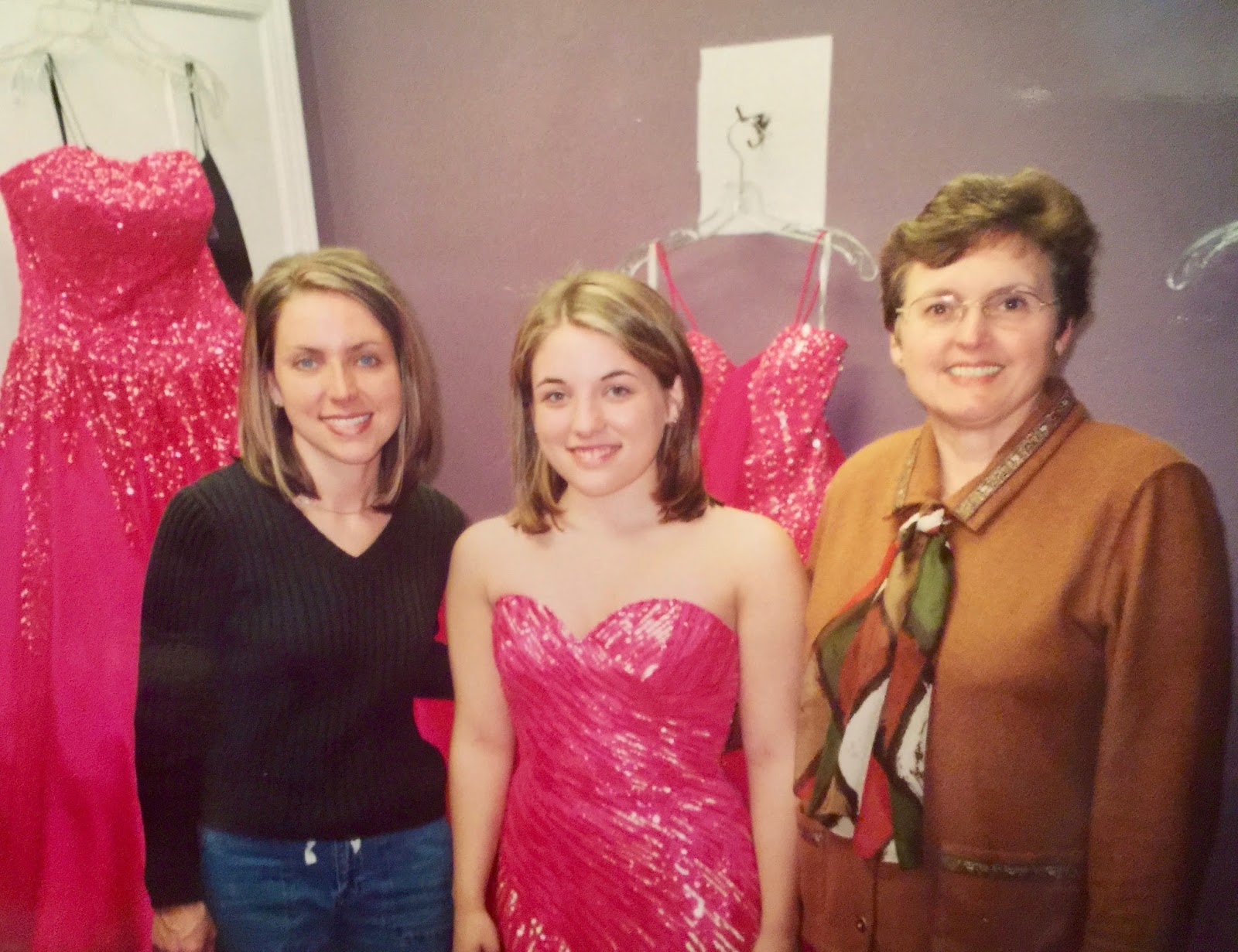 I had a great group of friends at this point in my life but it was just me and Dad for all the prom prep 😉 He went with me to get my nails done, hair done, and makeup done (in the past Mark’s mom had handled doing my hair and makeup for me). I could cry looking at these pics and remembering all the quality time I got with my dad. It meant a lot to me then and means even more now 🙂 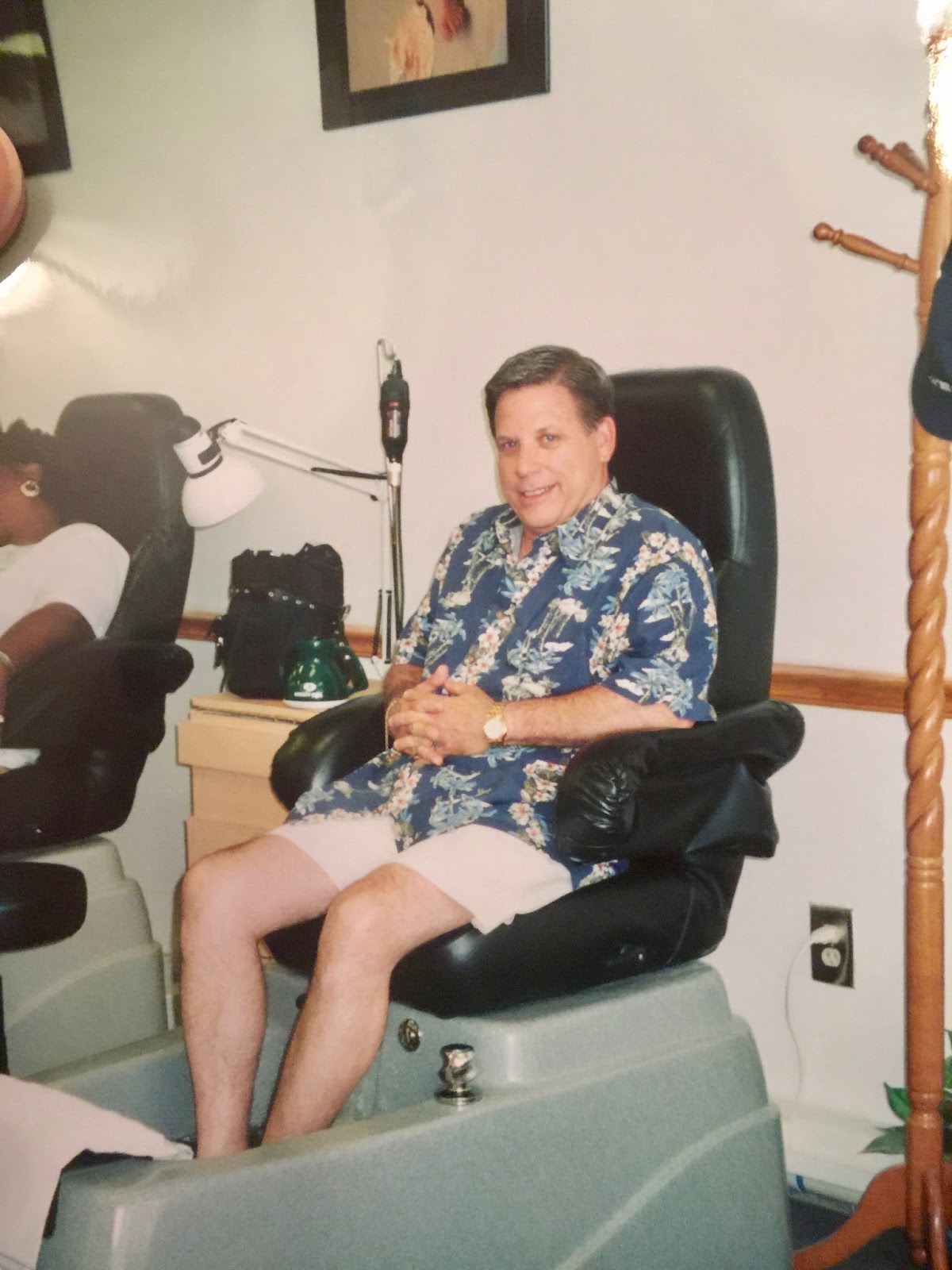 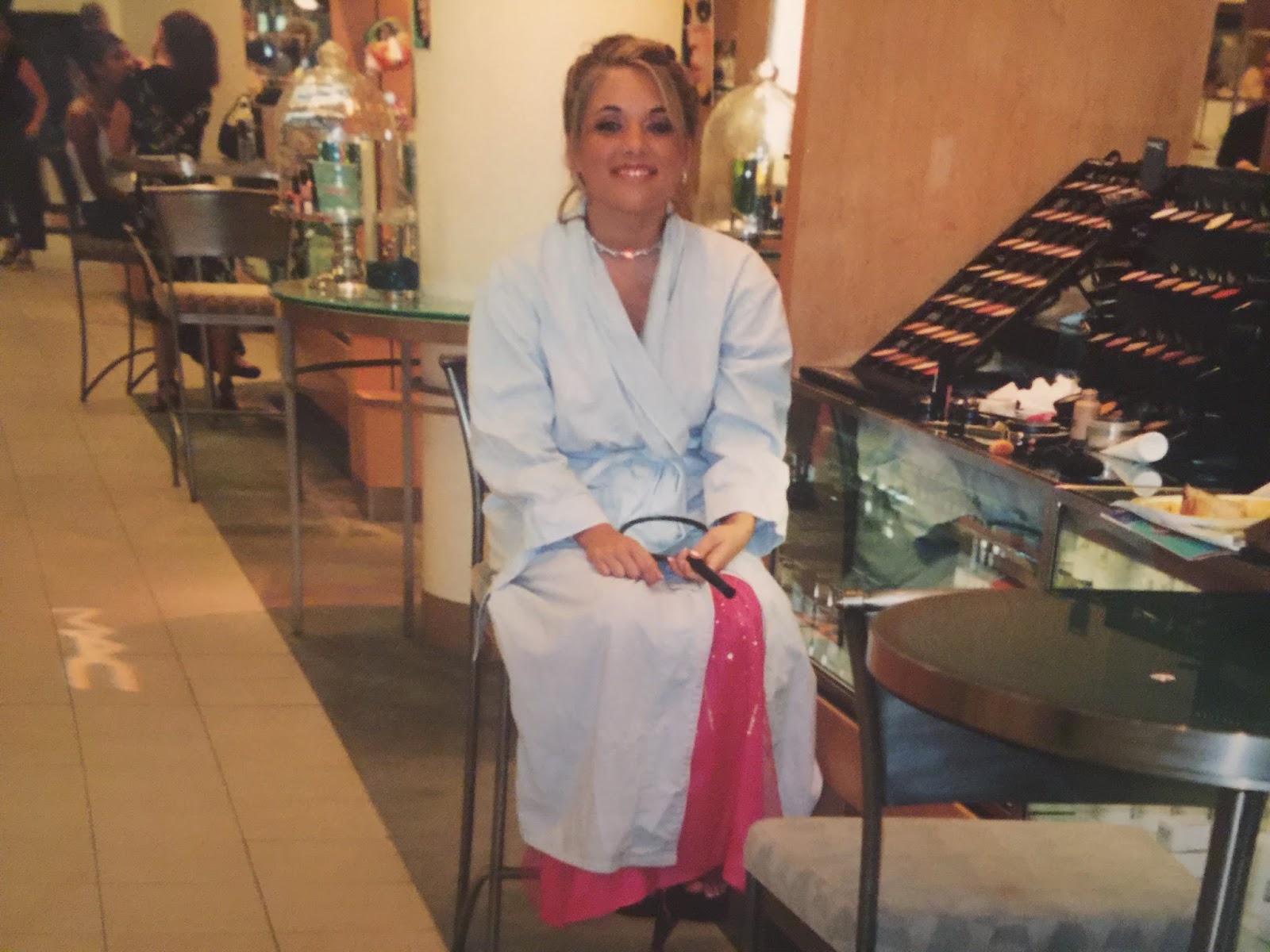 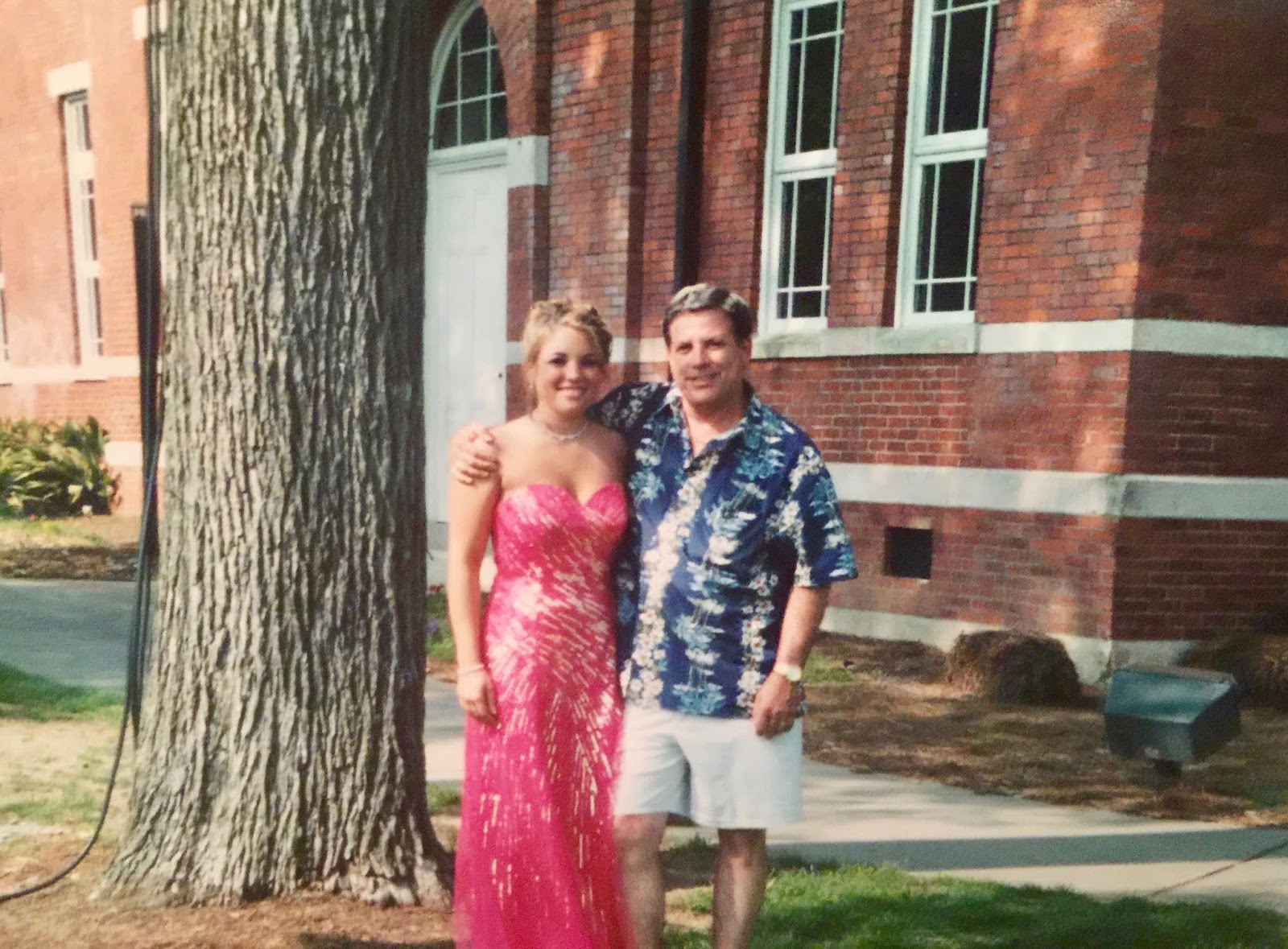 Even though we were broken up (and had been for several months) Mark was still my very best friend and we agreed to go together as friends. Sidenote but I’m SO GLAD all the “Prom-pose” mess wasn’t around back then. I don’t think Mark even officially ever asked me to any dances. I don’t remember how the conversation went down about senior prom but it was more of an agreement than anyone asking. Aside from all the photos together though, we didn’t spend a whole lot of time together. It was def a drastic change from the year prior. We went from a fancy hotel room to no kissing at all (well at least not each other ha!). 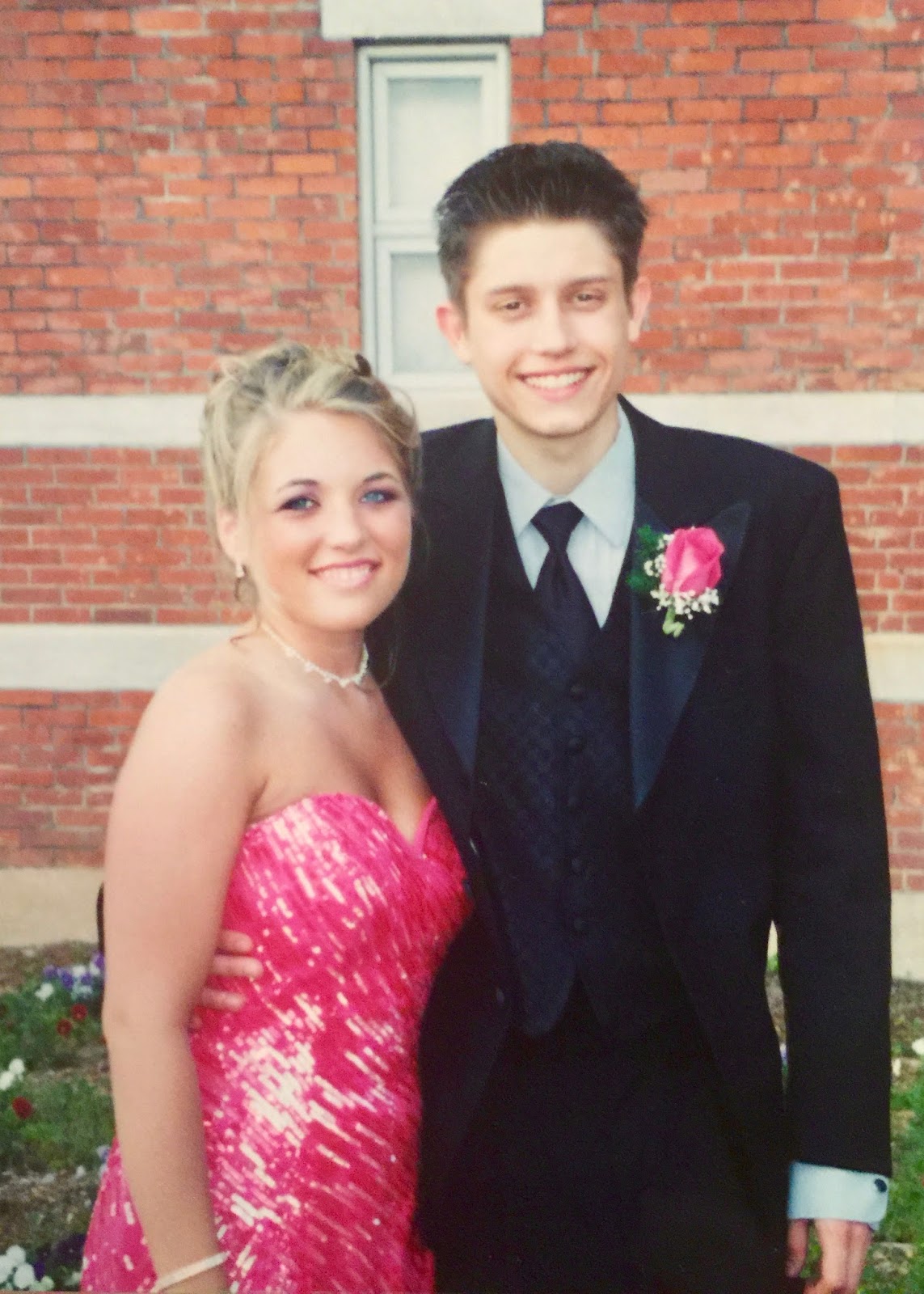 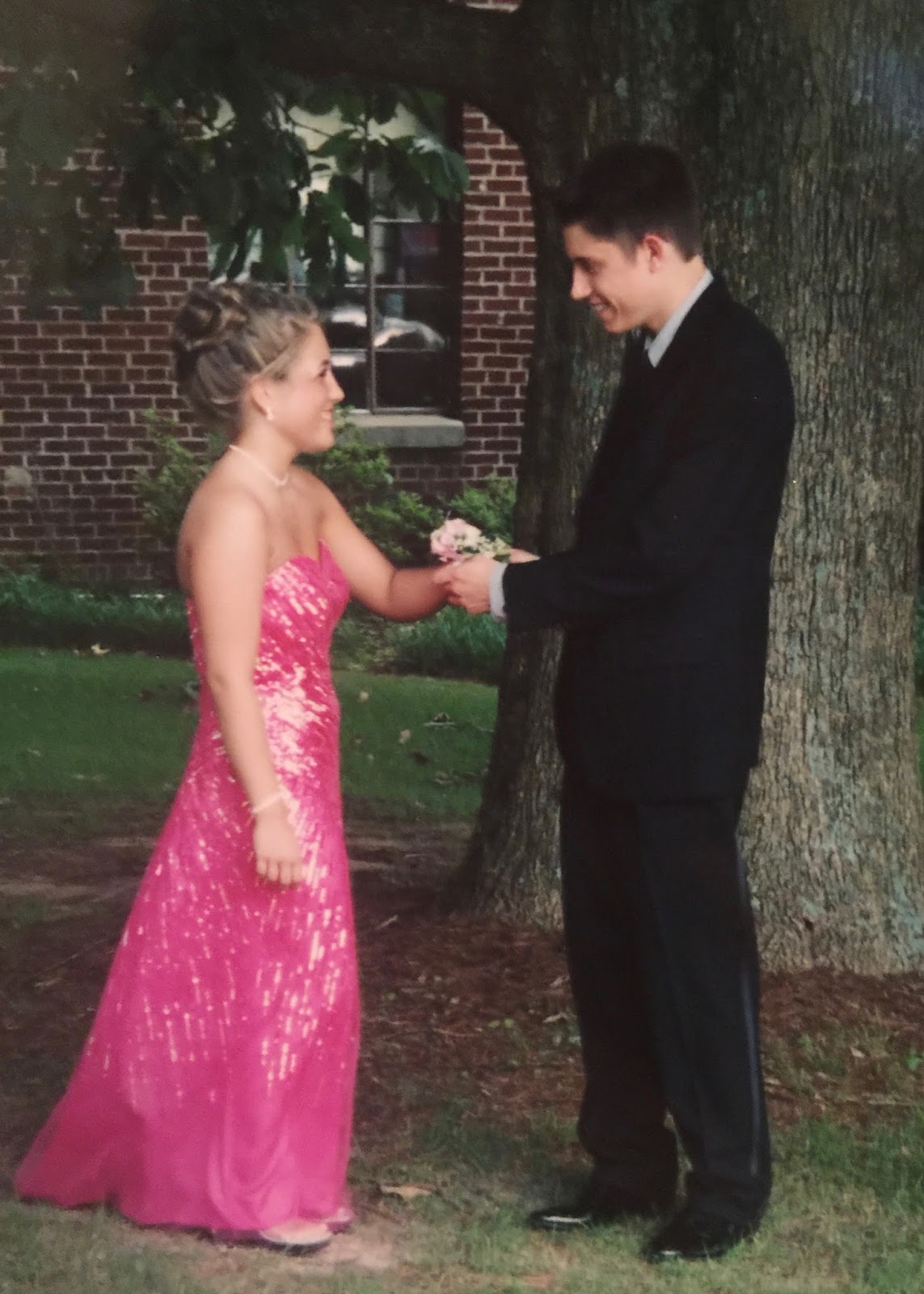 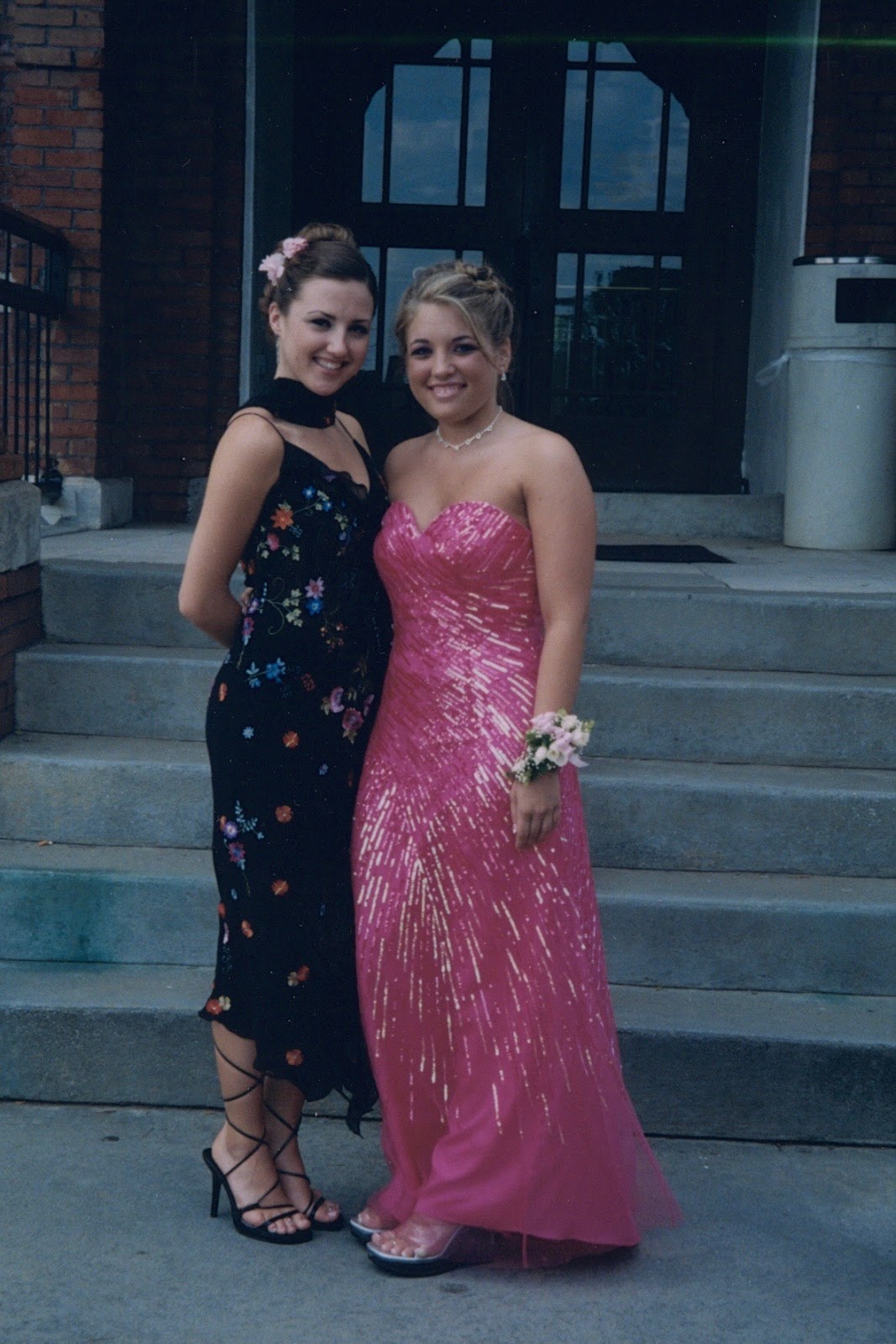 We had a BIG group who all went together to prom and I’m SO thankful I grew up with so many great people. Really majority of us were what you’d call “good kids” who made pretty good choices. We had a party bus for the night and all spent the night at Chelsi’s house. But there was NO drinking or drugs or anything even close to that. I can’t speak for any hook ups that may have happened (as you put teenage boys and girls together and what do you expect?) but overall it was a VERY tame and mild group which I’m thankful for! 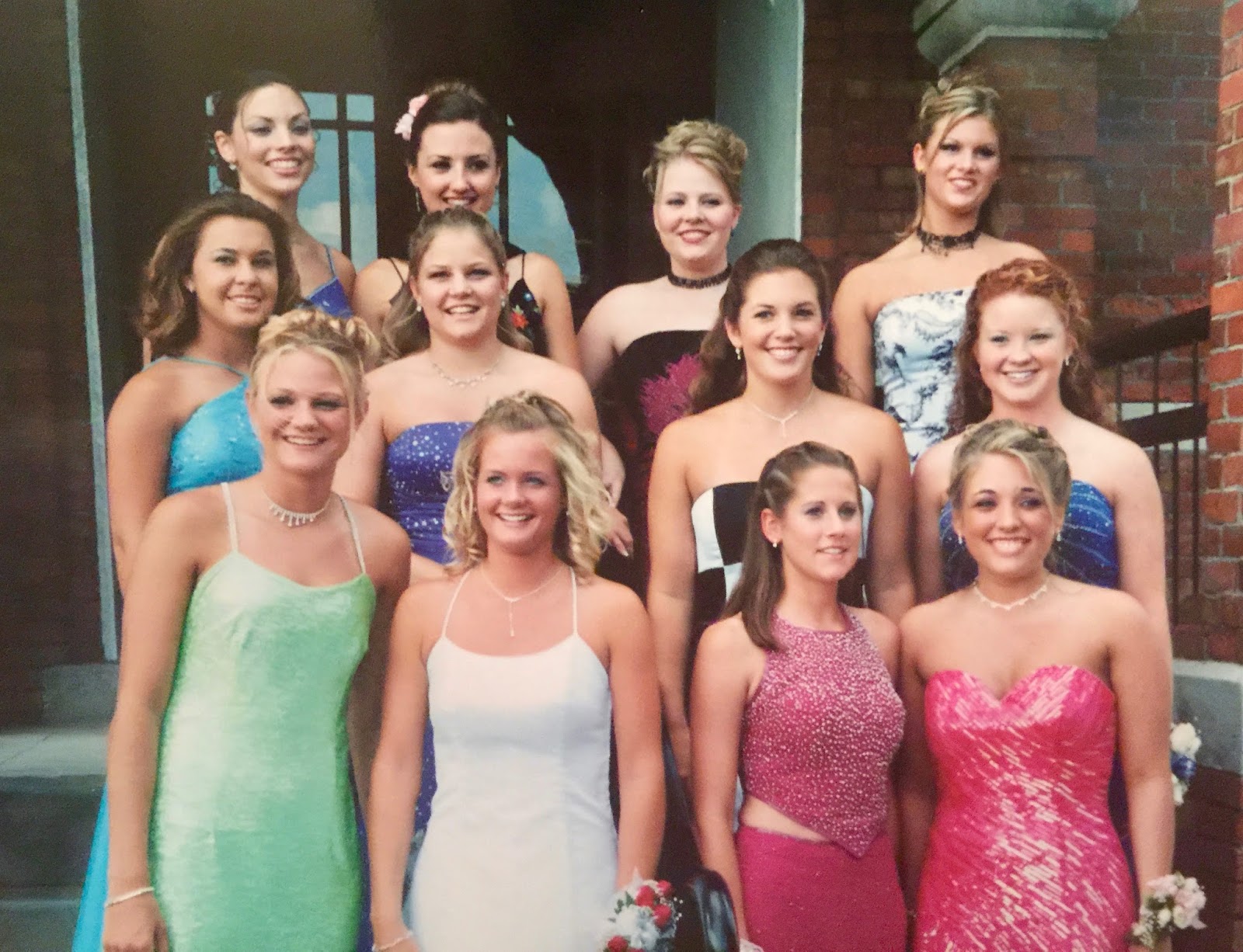 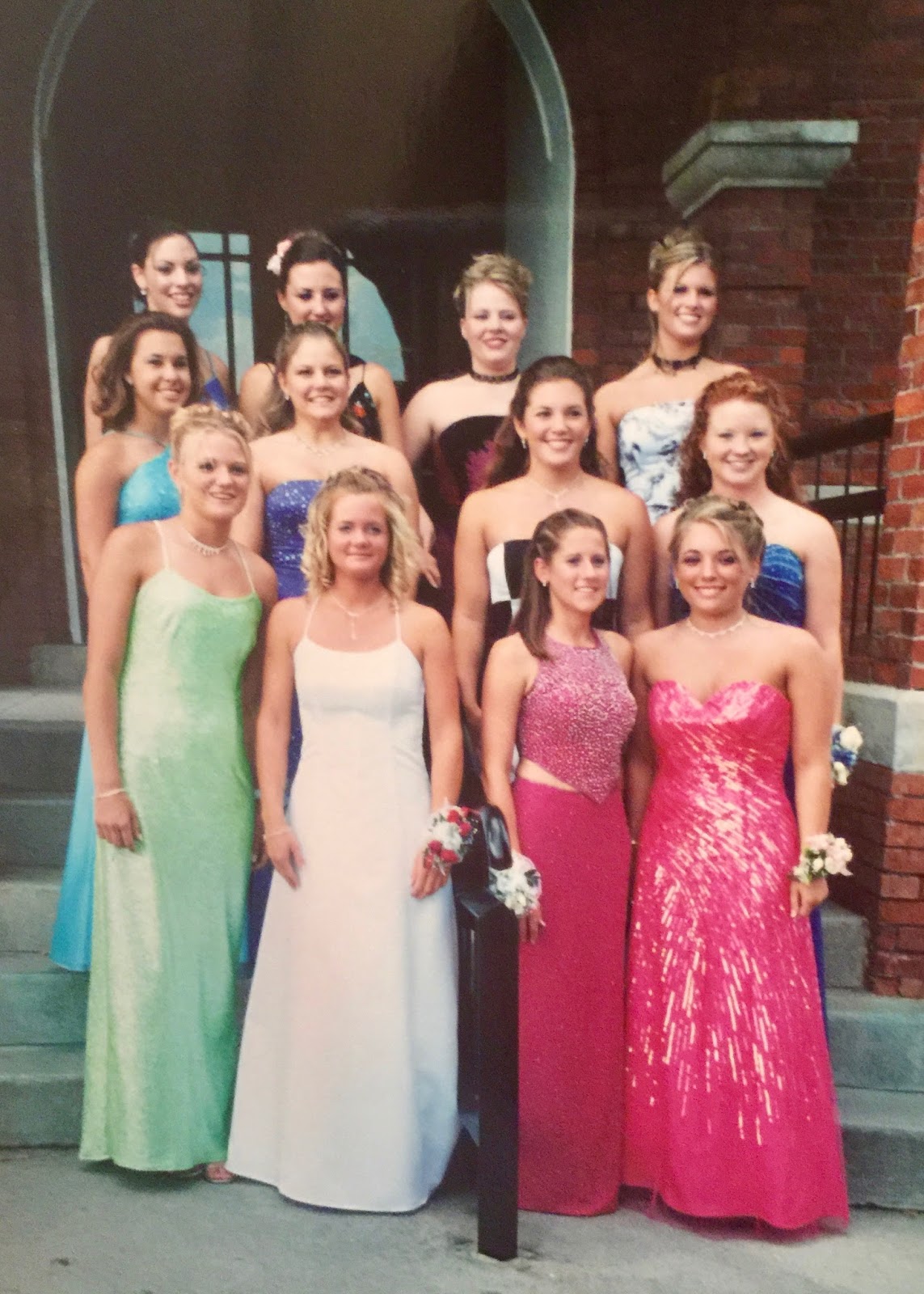 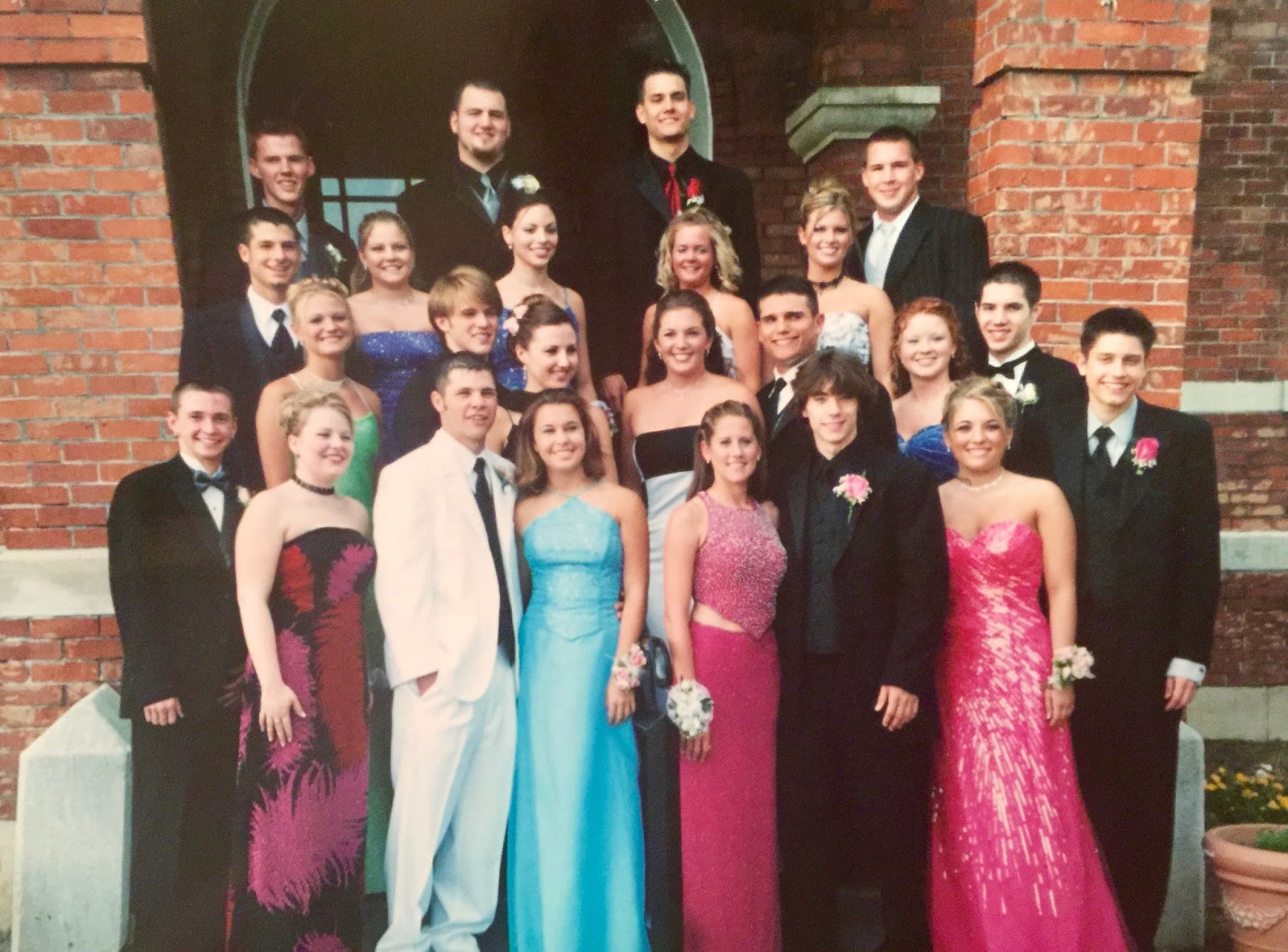 I do remember our bus driver hit a parked car haha we all joked that none of us were drinking but that maybe our driver had been! I was not a big dancer. Like AT ALL. I spent all my time at dances walking around visiting with everyone and taking pictures…not actually dancing. I think I am more into dancing now as a mom because you just stop overthinking things so much or worrying if you look stupid 😉 I keep telling Zach that we are going to BREAK IT DOWN in Mexico while on our anniversary trip. He doesn’t believe me (he’s still not a dancing fan) but it’s happening 😉 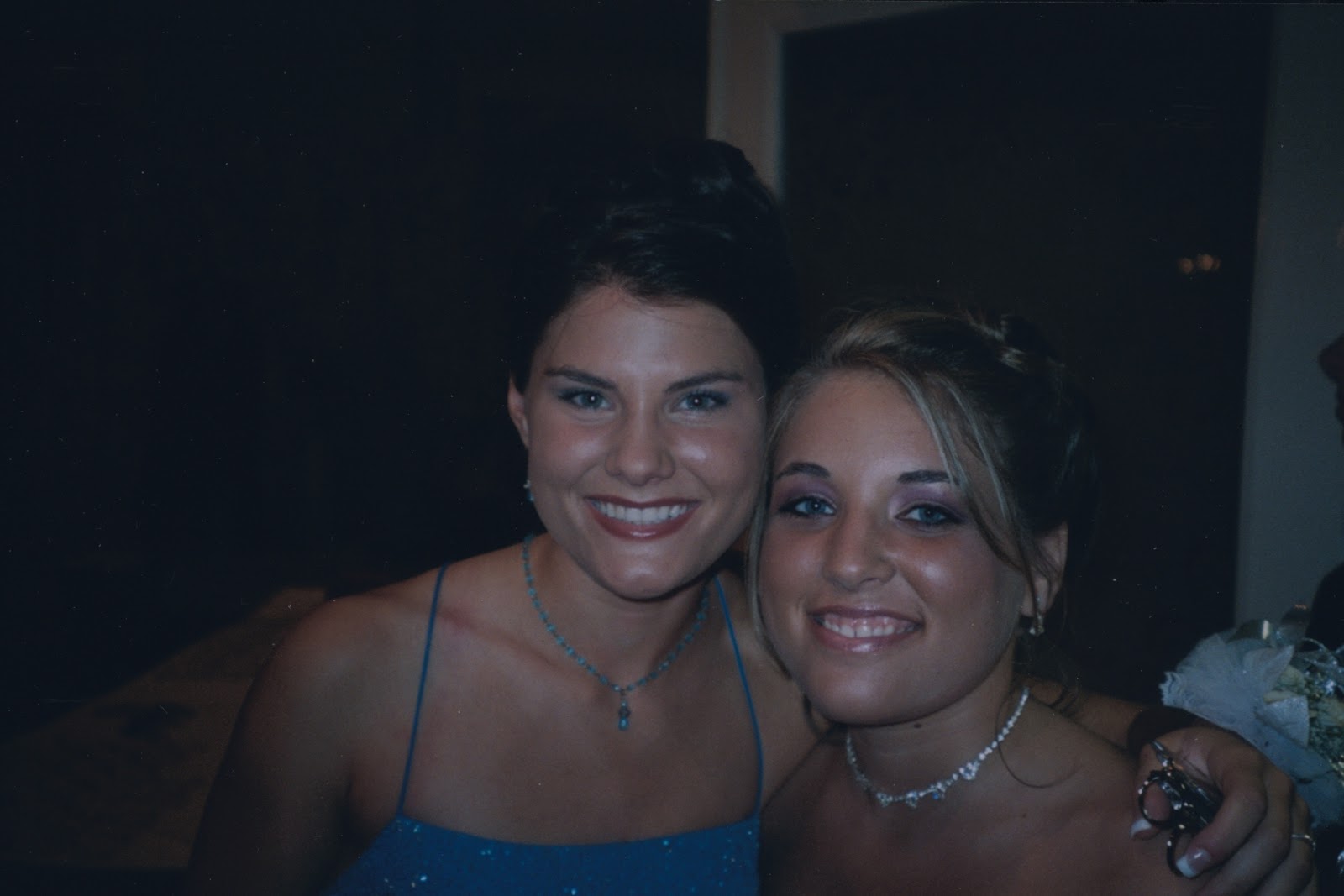 We had SUCH a great time and Senior Prom is something very special to me when I look back and remember just the great friendships and laughter shared. I lived in a basement apartment (you can read about it here) and was NOT shocked to end senior prom coming home to my car being egged. When teenagers know you live alone, and you have a very recognizable car, and it’s parked on the street? It got egged ALL THE TIME. 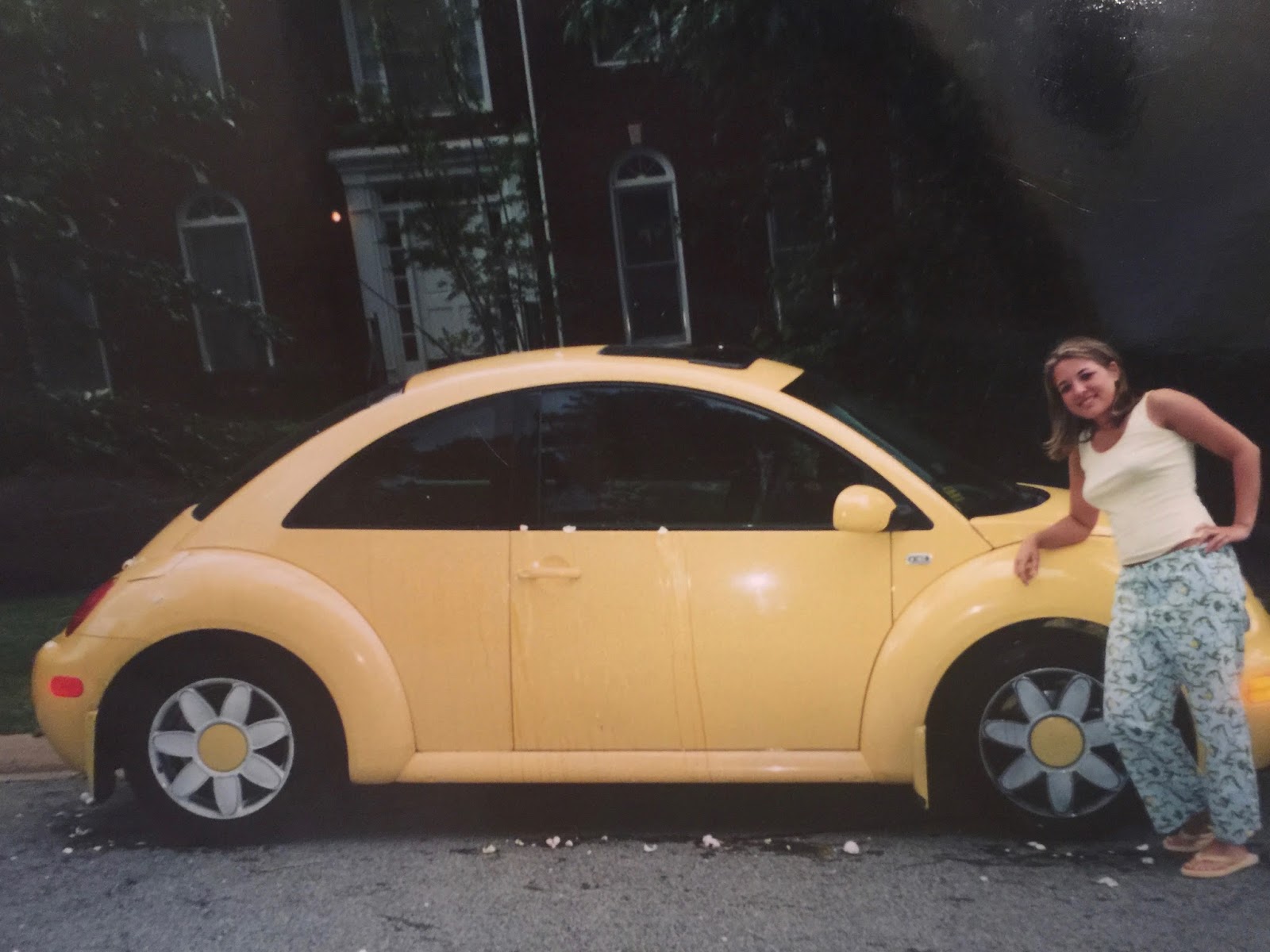 Zach never attended any of his school dances (dancing is a slippery slope with Christianity…especially the way most teens dance…) and I’m not sure yet how we’ll handle them with our kids. I can see me being the planner that I am planning some sort of alternative to the dances and letting the kids go to get pics taken or whatever and then leaving (I think that’s what Courtney did?). I’m sure we’ll figure it out when the time comes. It’ll be interesting to see Zach and I parent teens. We were raised SO DIFFERENTLY! I’m confident that we’ll find that perfect balance for our children!