Can I just say I’ve been doing awesome these past couple of years at knocking things off my “bucket list”? I’ve taken a photography course, watched FSU play UF at Doak, seen every Best Picture film nominated for an Oscar, and now I’ve taken a self defense course 🙂

I have always been a bit jumpy and quick to feel like I’m in danger in situations. Once in high school I remember I parked at the mall pretty far from the entrance (b/c I’m terrible at parking…) and a creepy un-marked big van parked in the spot right next to me. Heck no! I raced off and drove around a bunch then parked in a different area of the mall and had a security guard escort me to my car when I was ready to leave. Dramatic? Maybe. But I am HARDCORE about being safe. I’d rather be made fun of and be SAFE than be “cool” and be dead.

Now that I have kids I am even more aware of my surroundings and often feel like I’m an easy target. Loading and unloading the kids from the car is no quick task and it always makes me nervous. I have had a homeless man approach me in a parking lot hustling me for money while I was trying to get Kye buckled in his seat. Not cool dude!

Due to my uneasiness when out in public places (or, let’s be honest, even when I’m at home…no joke when Zach isn’t home I won’t shower when it’s dark outside haha I’m always scared someone is going to attack me while I’m in the shower and I can’t hear them b/c the water is running…) I’ve always wanted to take a course in self defense.

I saw on Facebook one weekend that a bunch of people from our church had gotten together to go shoot guns. One of my goals for this year is to get myself a gun and learn how to use it. Seeing all of them out shooting motivated me in a big way and I started calling around to see where I could take a self defense class. Turns out I found a place that was willing to do the course for us for FREE if I could get 20 women to show up for it! I created a Facebook group and spread the word like crazy and just crossed my fingers and hoped enough would show!

Zach made a LOT of fun of me for wanting to do this and didn’t understand why I wanted to if I was going to buy a gun anyway. I’ll tell you why! I know I won’t have my gun out and ready all the time. Let’s say I’m putting the kids in the car and get approached by someone. I will use my self defense skills to give me the time to GRAB the gun then shoot them. Good idea right? Zach also teased me that no self defense will really help in those types of situations. But for me, I just wanted the CONFIDENCE I knew the course would give me. I am a thinker and now when I’m out in a shady situation (which “shady situation” to me is pretty much any time I’m in a parking lot, even in broad daylight haha) I think through the tips I learned that day so I’ll be prepared if I need to use them!

I really didn’t know what to expect from the course. I figured if nothing else, it’d be fun!

I was SO THANKFUL to have such a great turn out! We needed twenty people and we ended up having 22 total 🙂 I took a couple pictures and so did Robyn 🙂

We had both a female and male instructor (sorry, I can’t remember their names) but the girl did most of the instructing. Legit…she was even smaller than I am so seeing her do all these moves and even hearing some of her real life experiences in using them made me feel SO GOOD. I mean if she can do it, so can I!!!

We practiced on each other as well as on the instructors. We learned how to protect ourselves mostly against people who are not armed in anyway since that is the most likely scenario. We also learned about how to protect ourselves in the event that the other person has a knife. They didn’t go into much about guns b/c, duh, if someone has a gun you ain’t got much protectin’ you can do haha 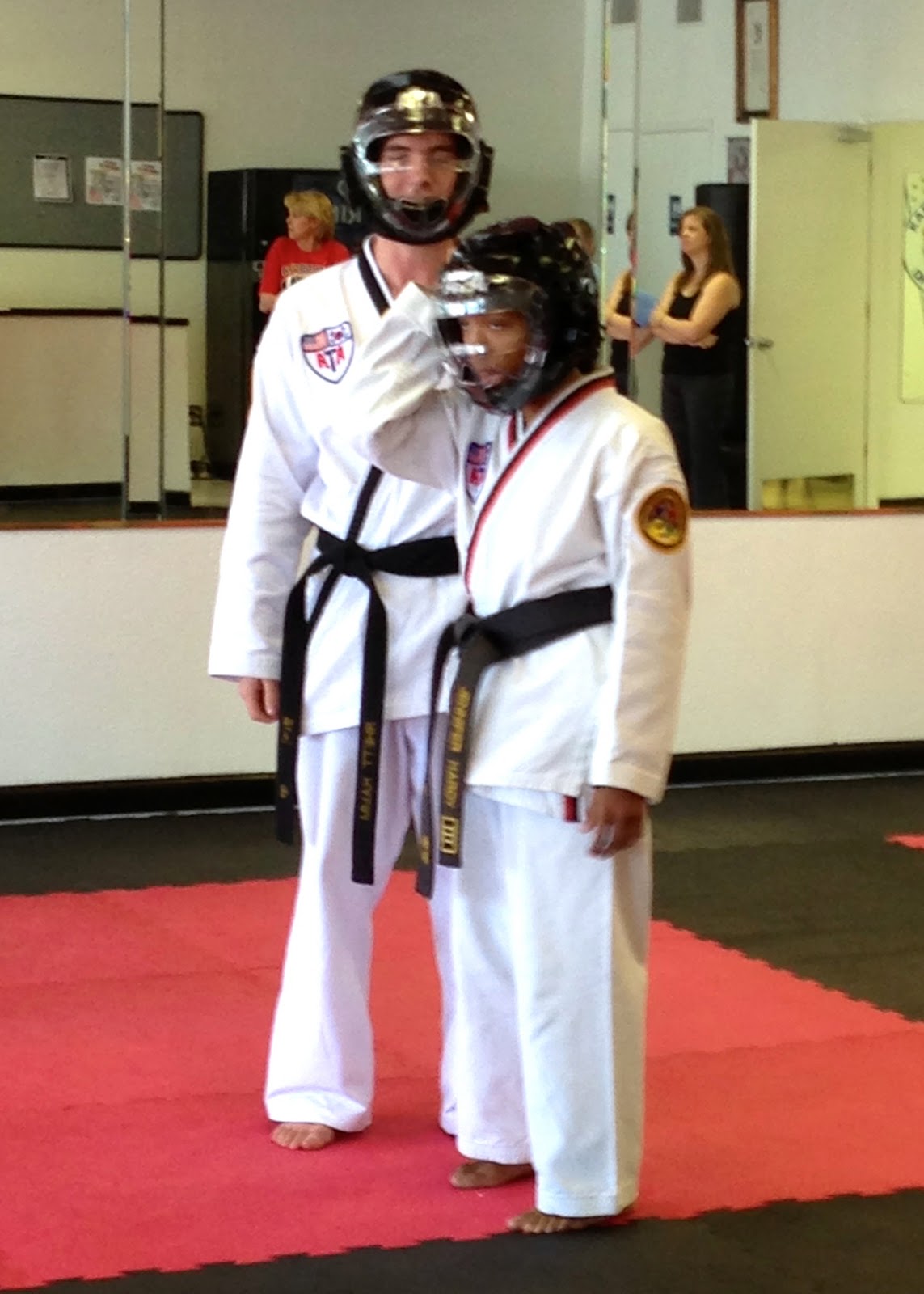 Little Mama, taking down someone who has a knife! 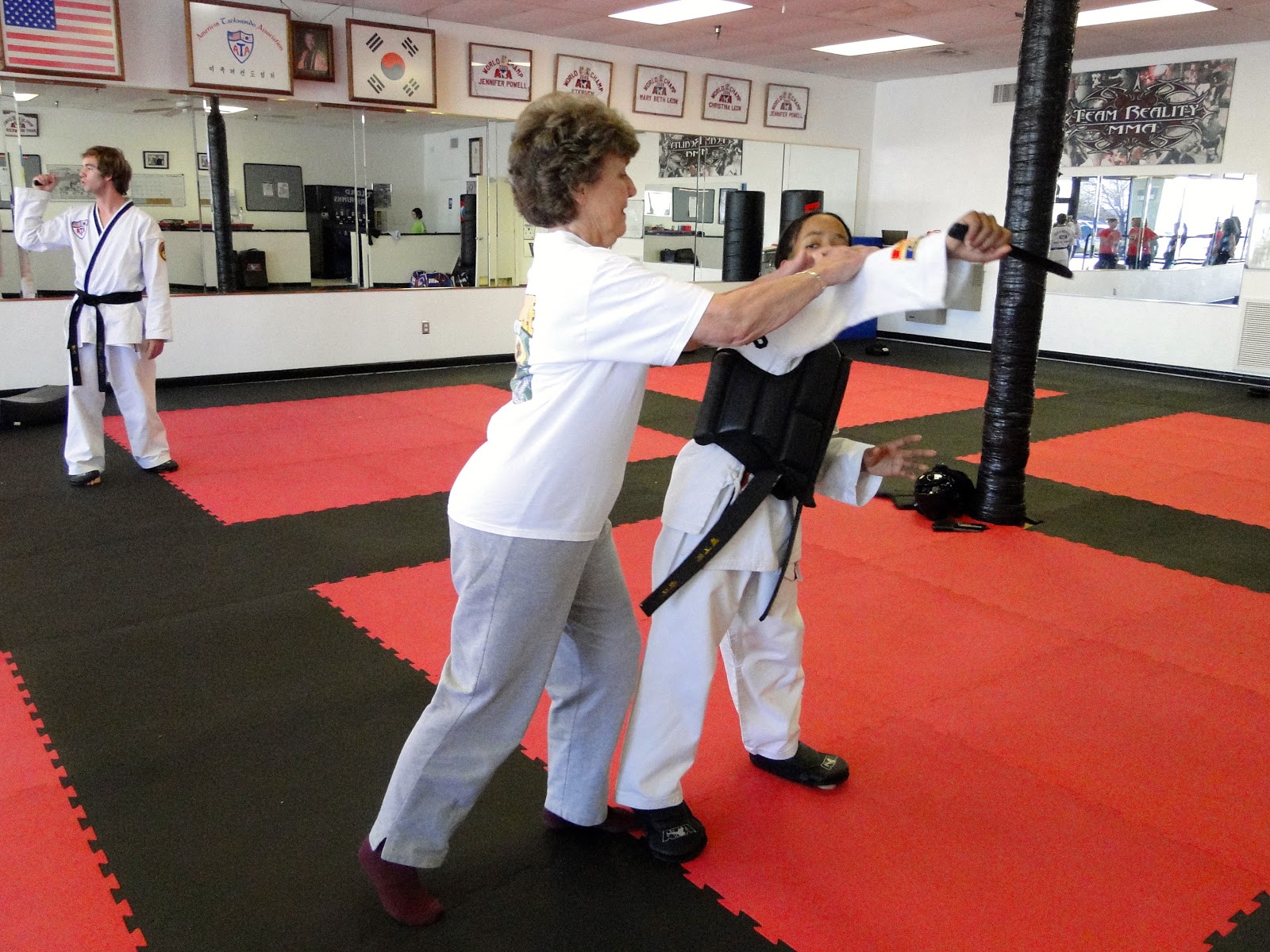 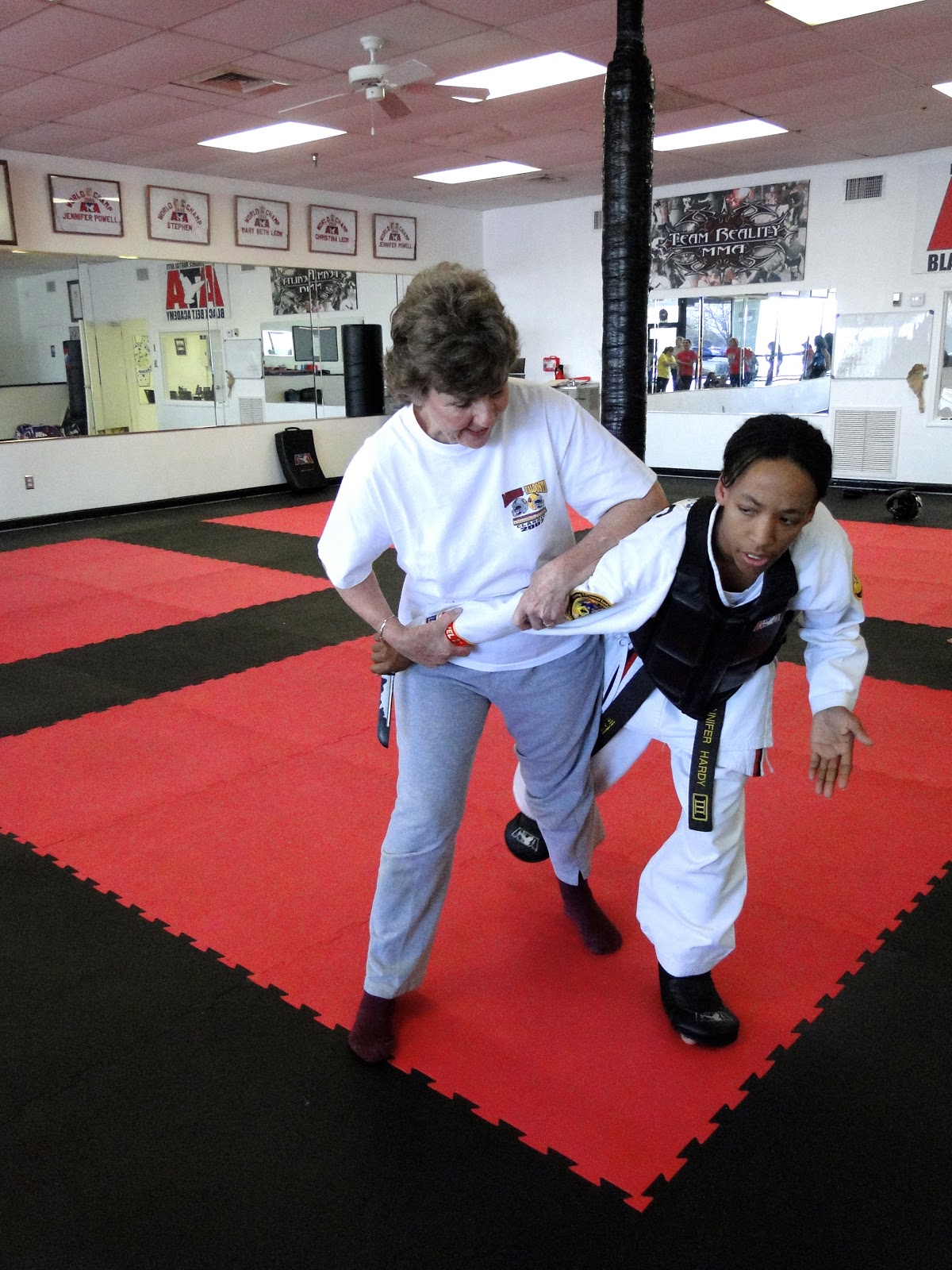 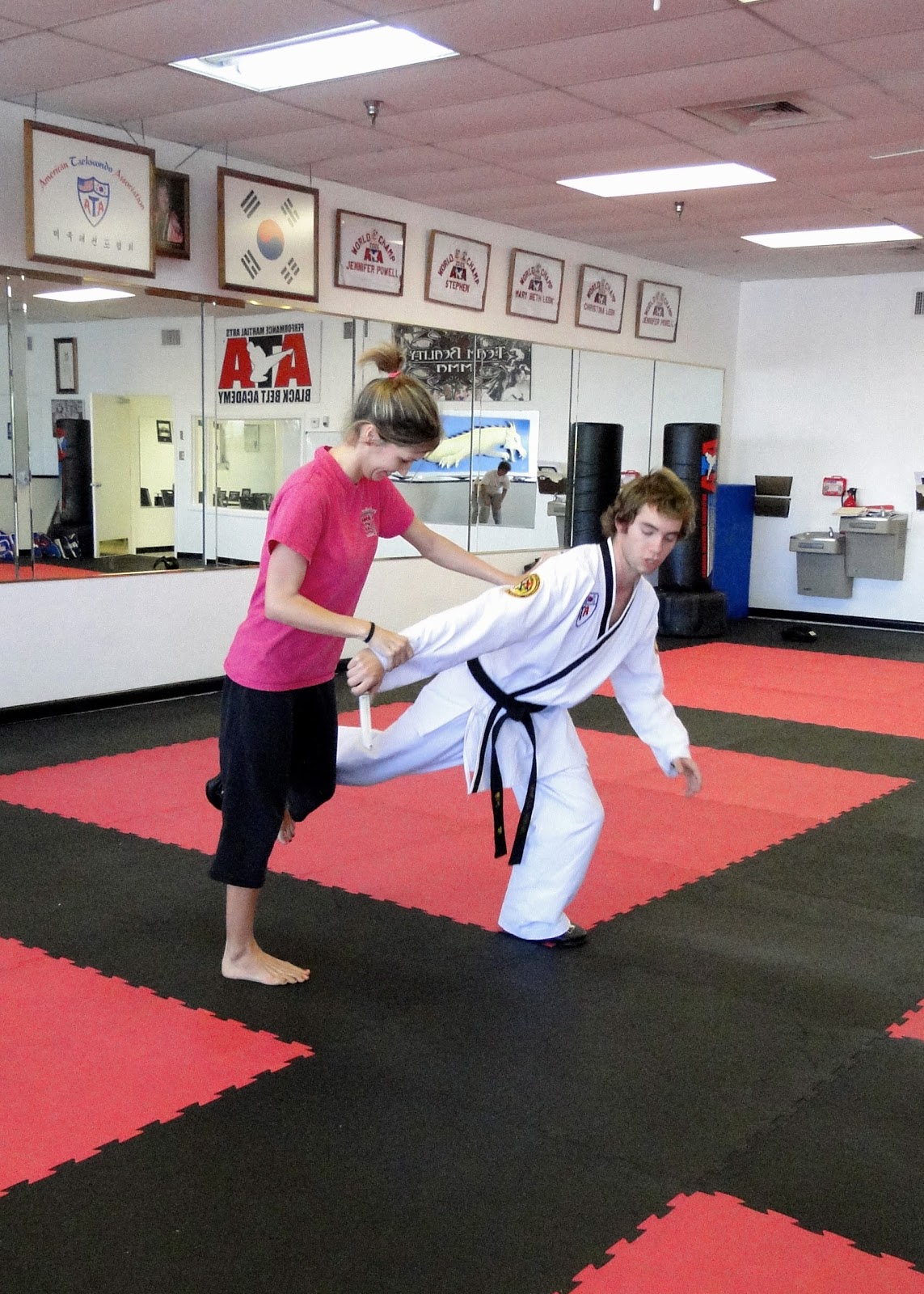 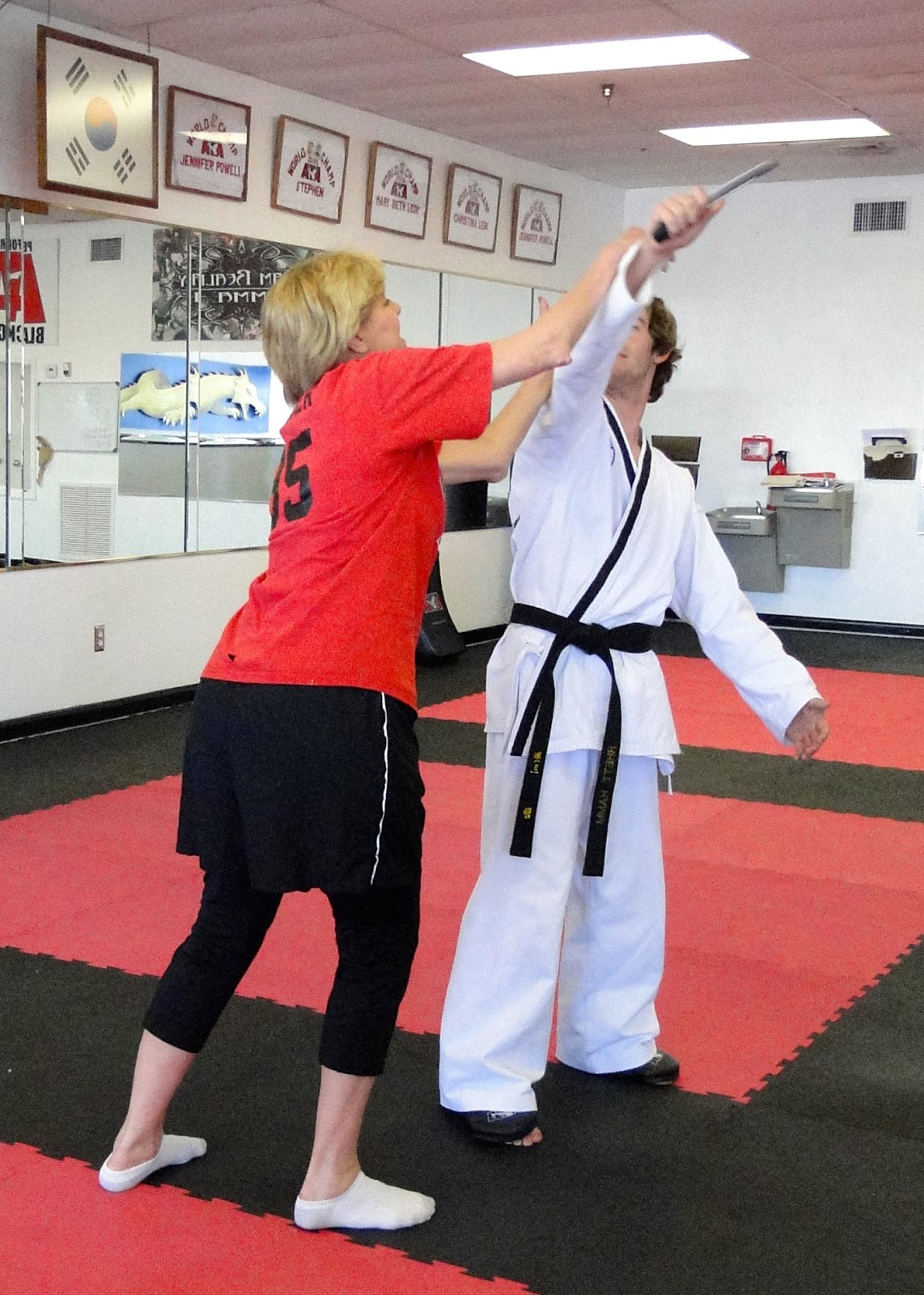 Love how she’s gouging his eyes out haha 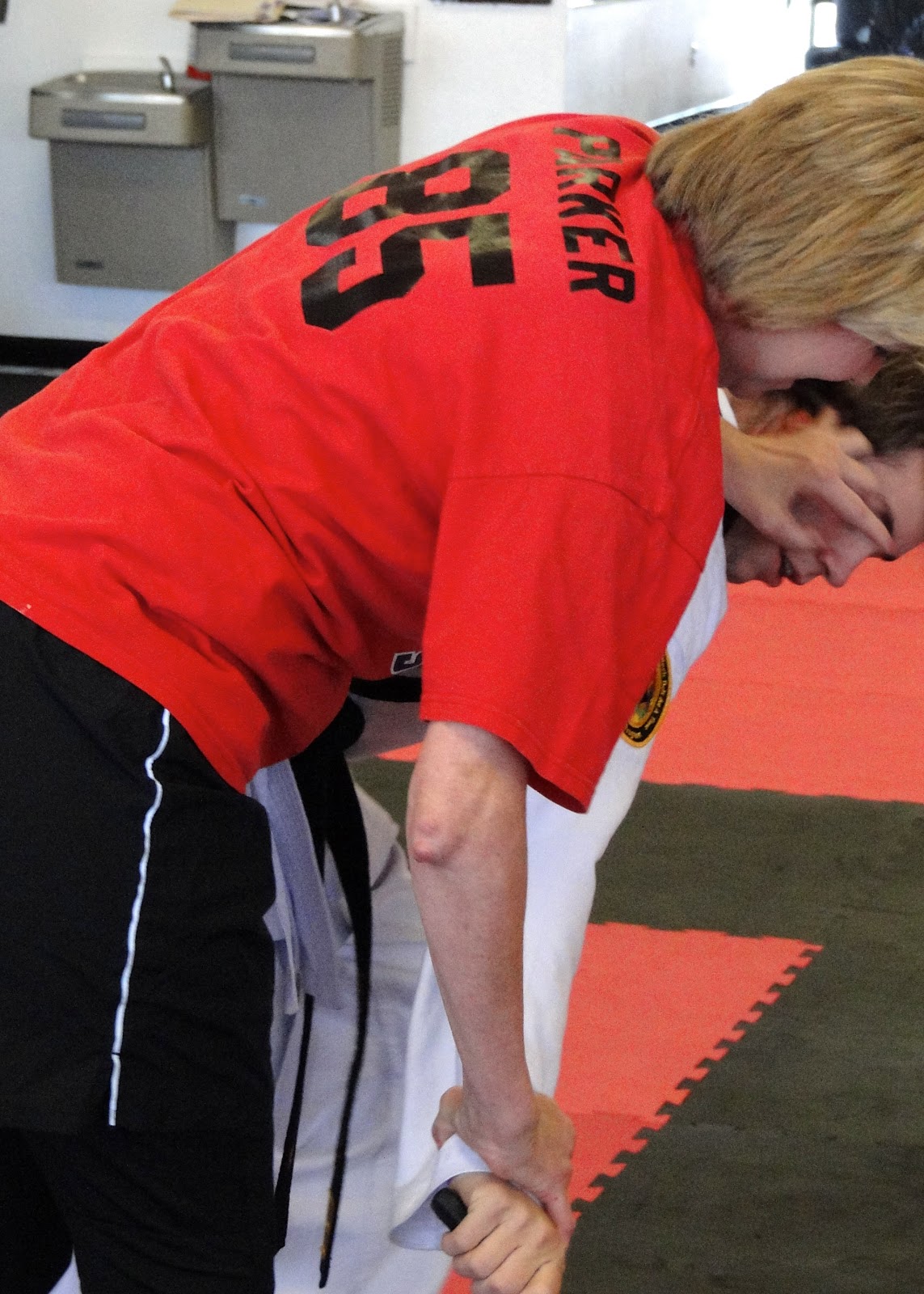 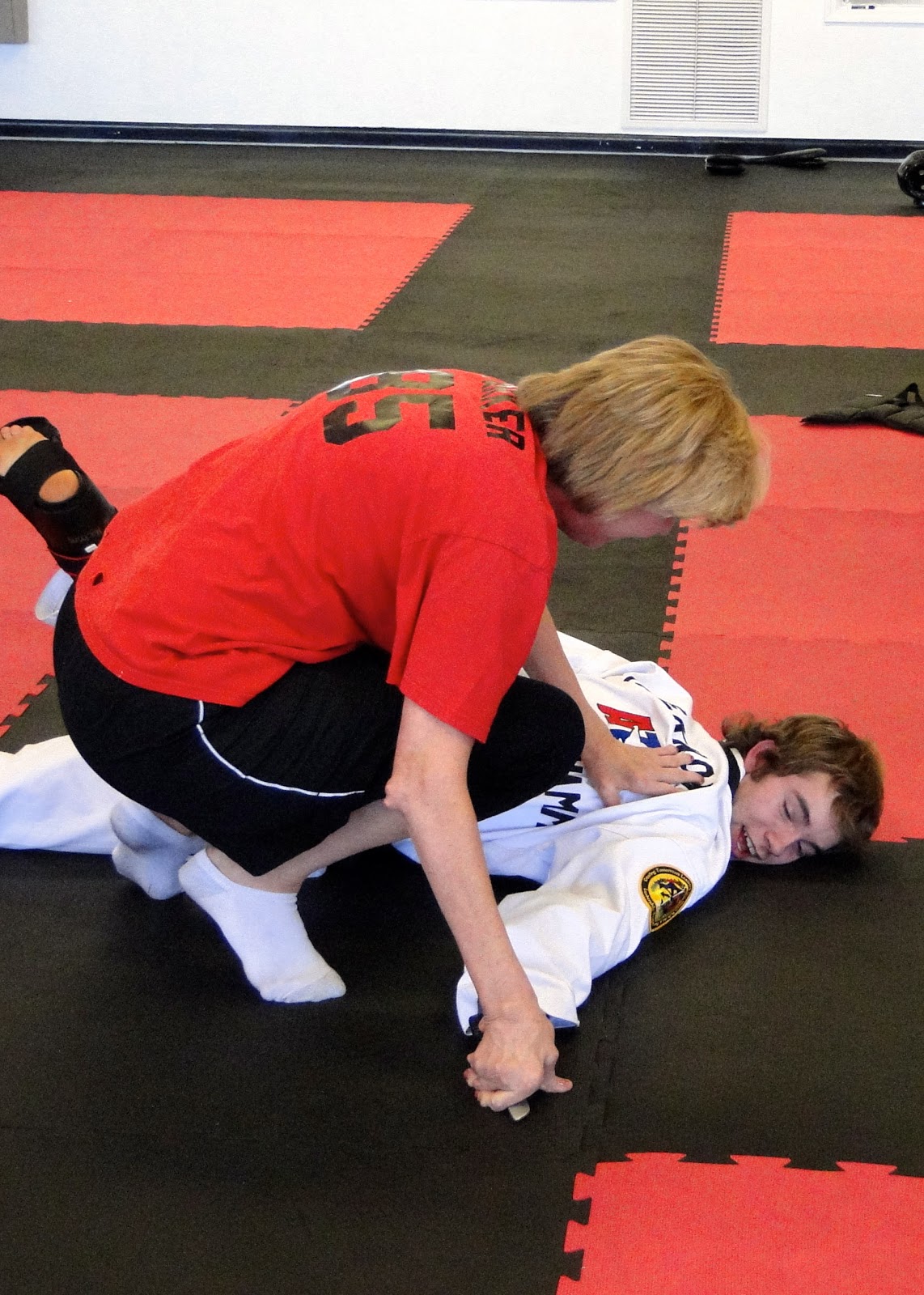 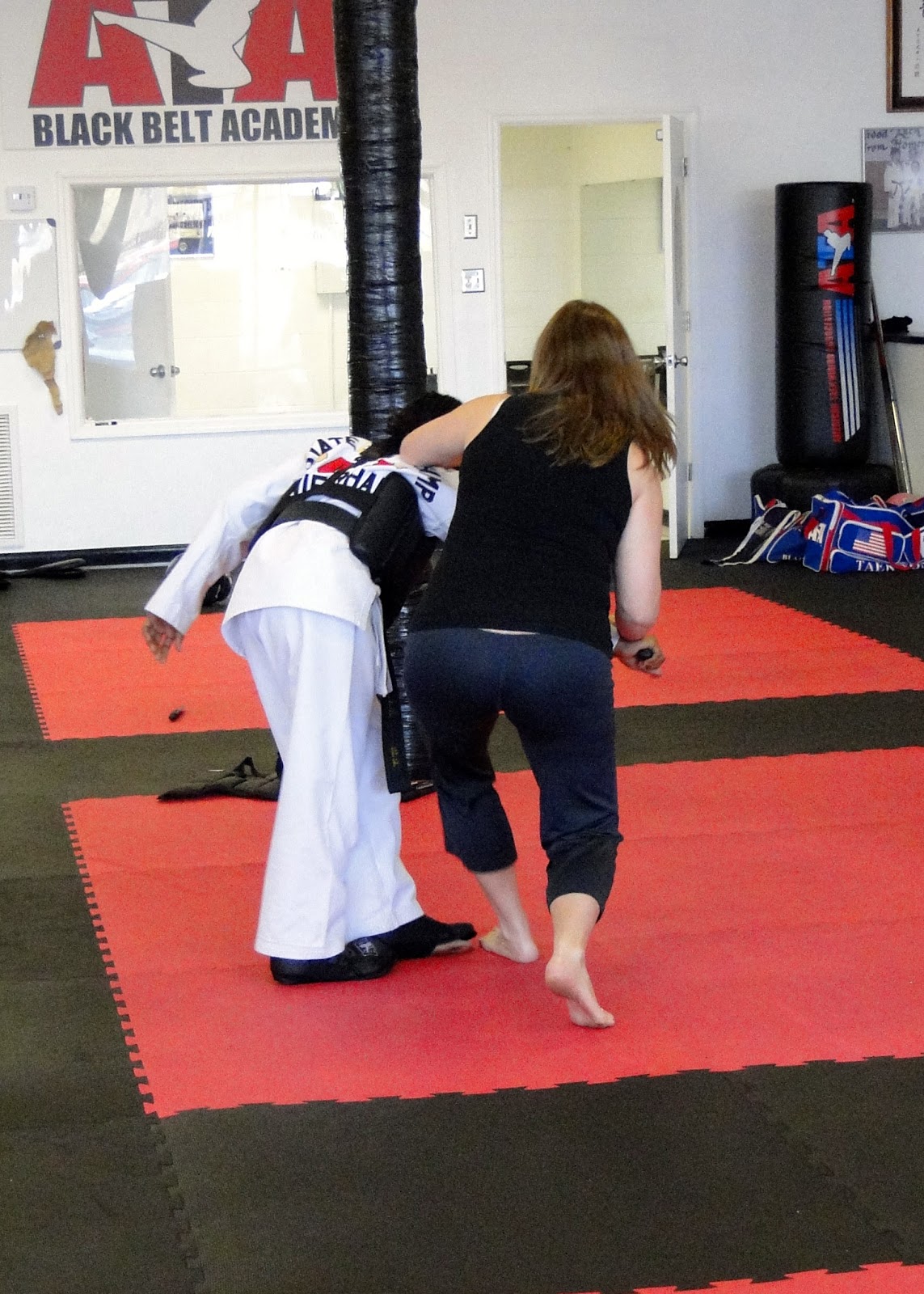 Everyone listening to the instructions! 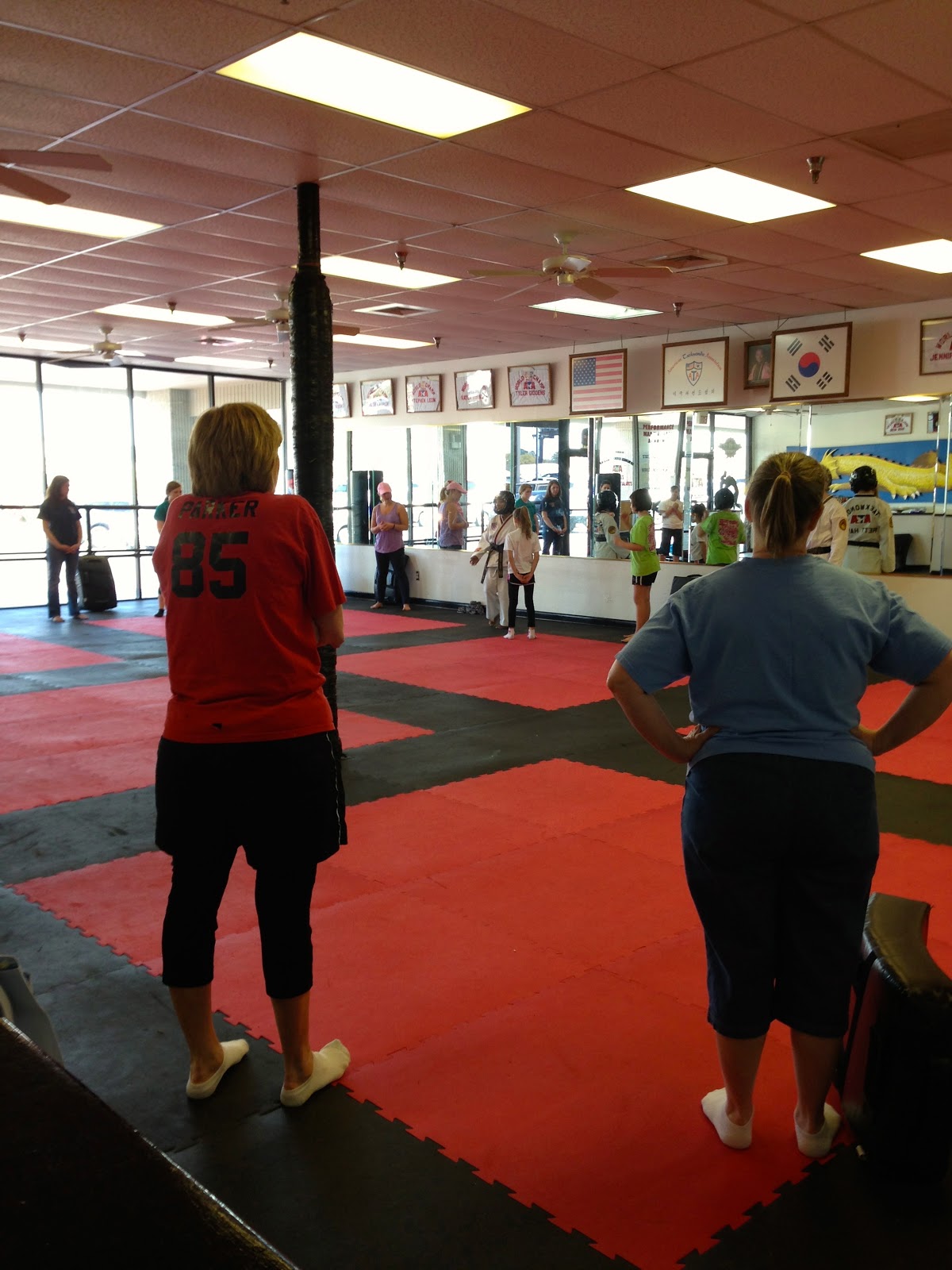 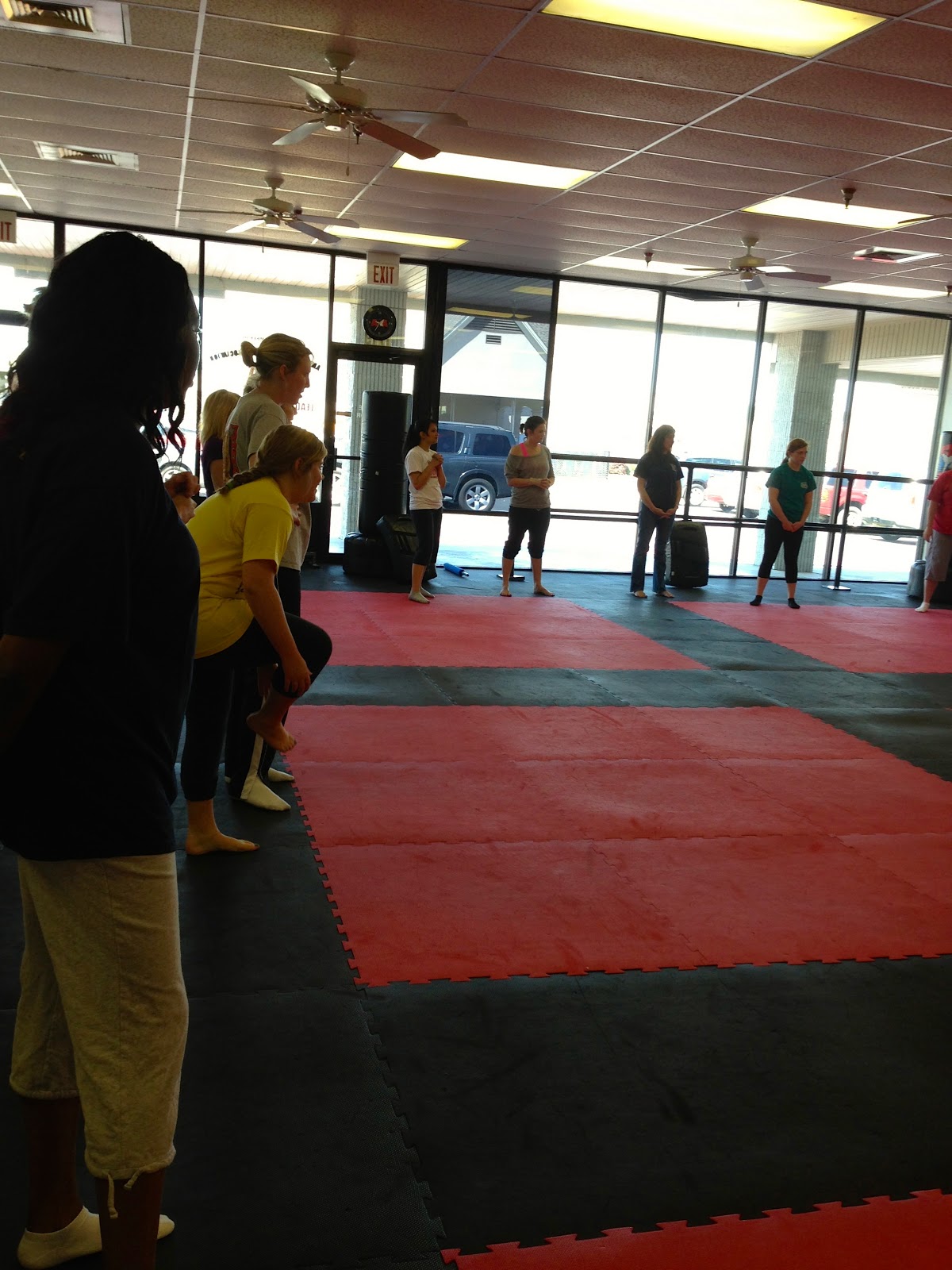 Kayla provided the best question of the day:

“What do you do if you’re totally alone in the middle of the woods?” haha 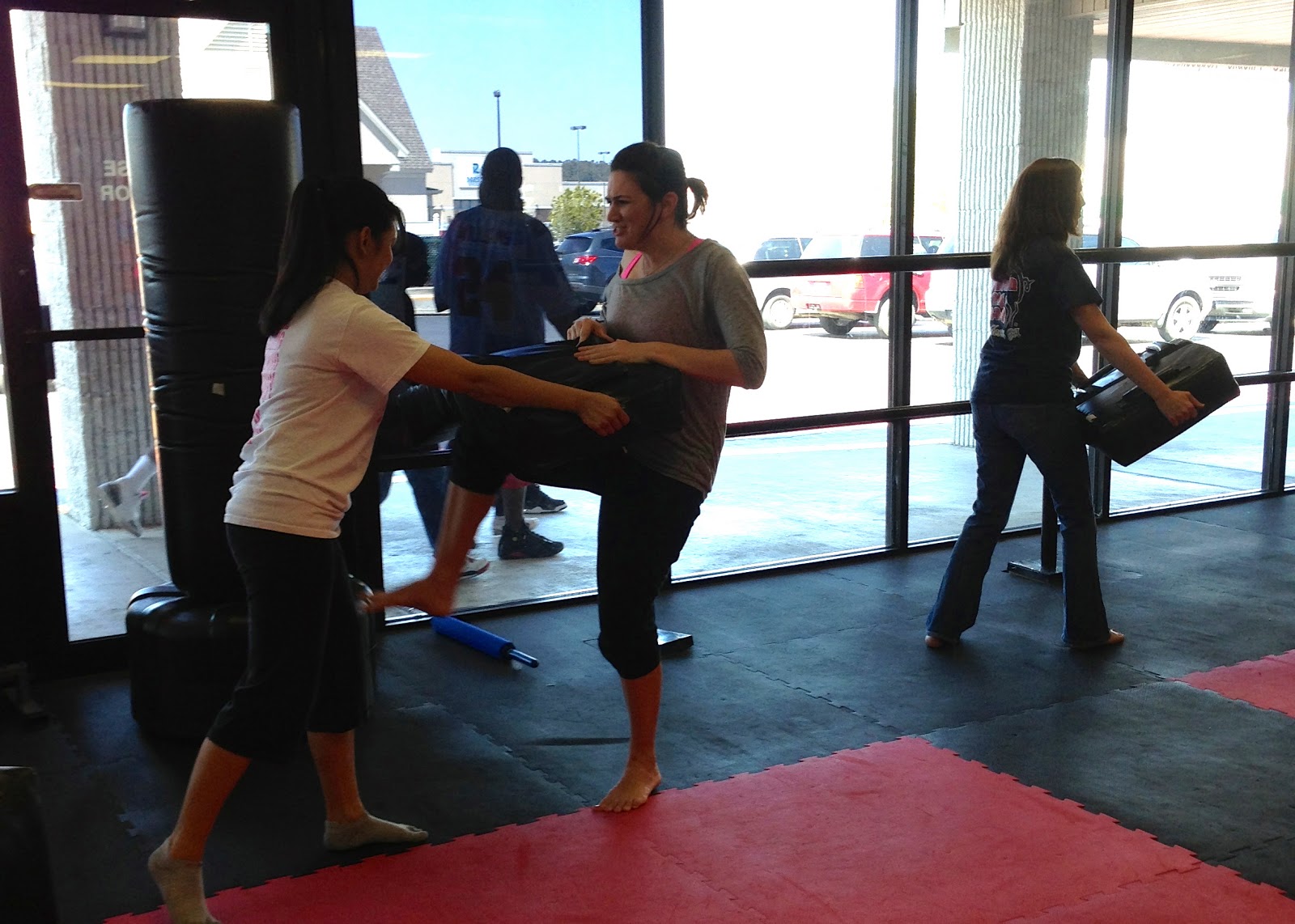 Crissy was rockin’ the pink hat and her mom was def MVP for the day! NO ONE is gonna be messing with her! 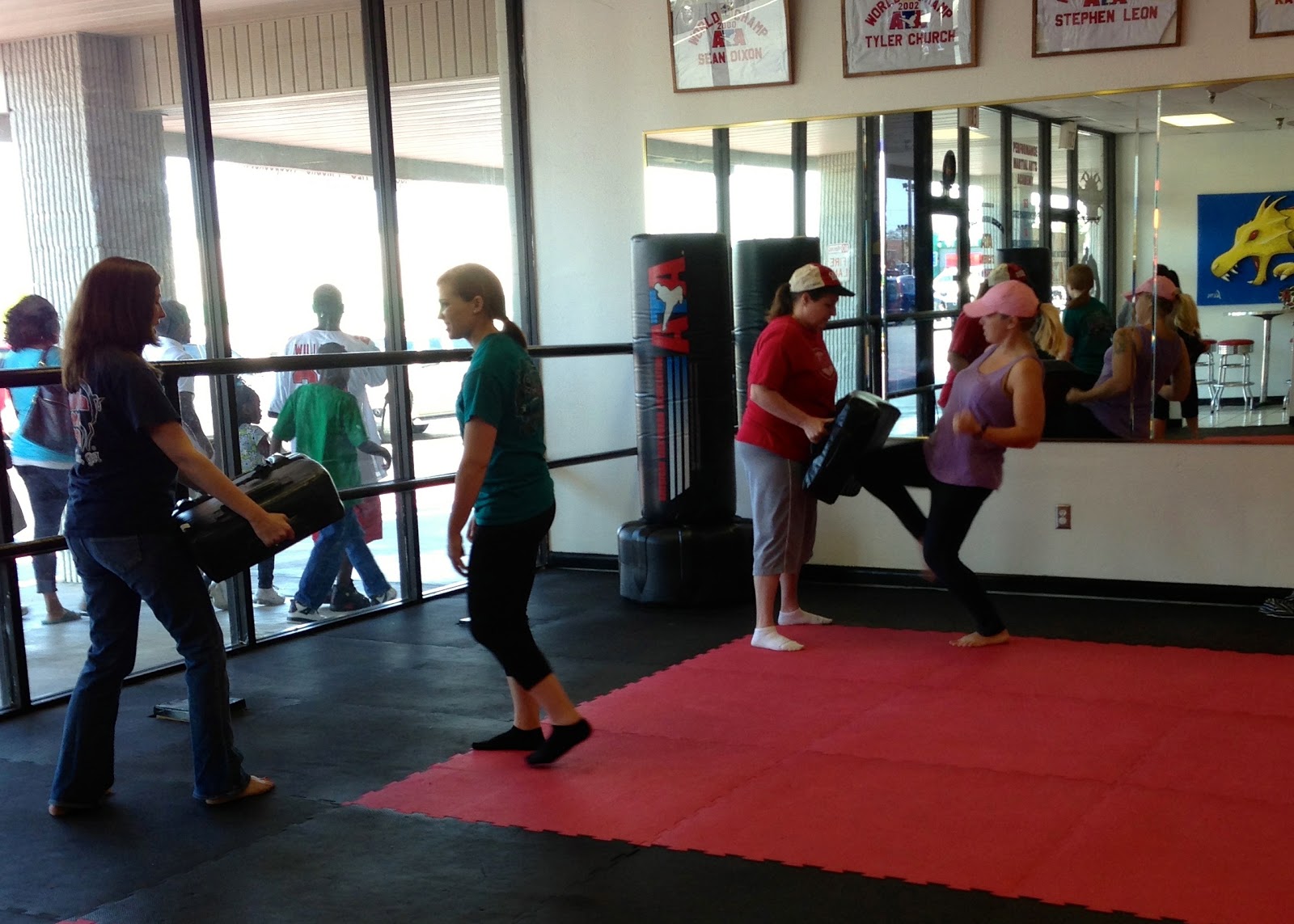 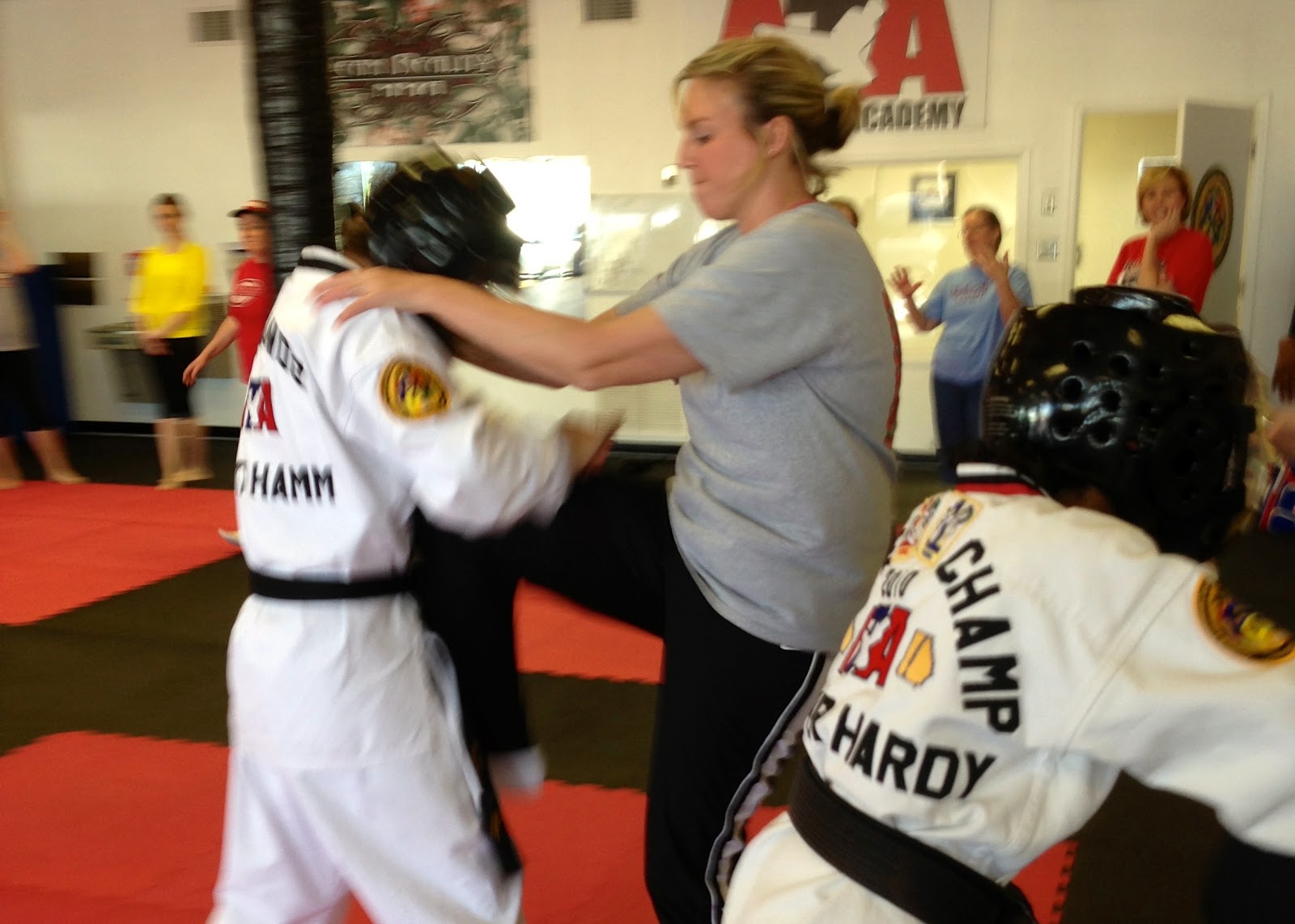 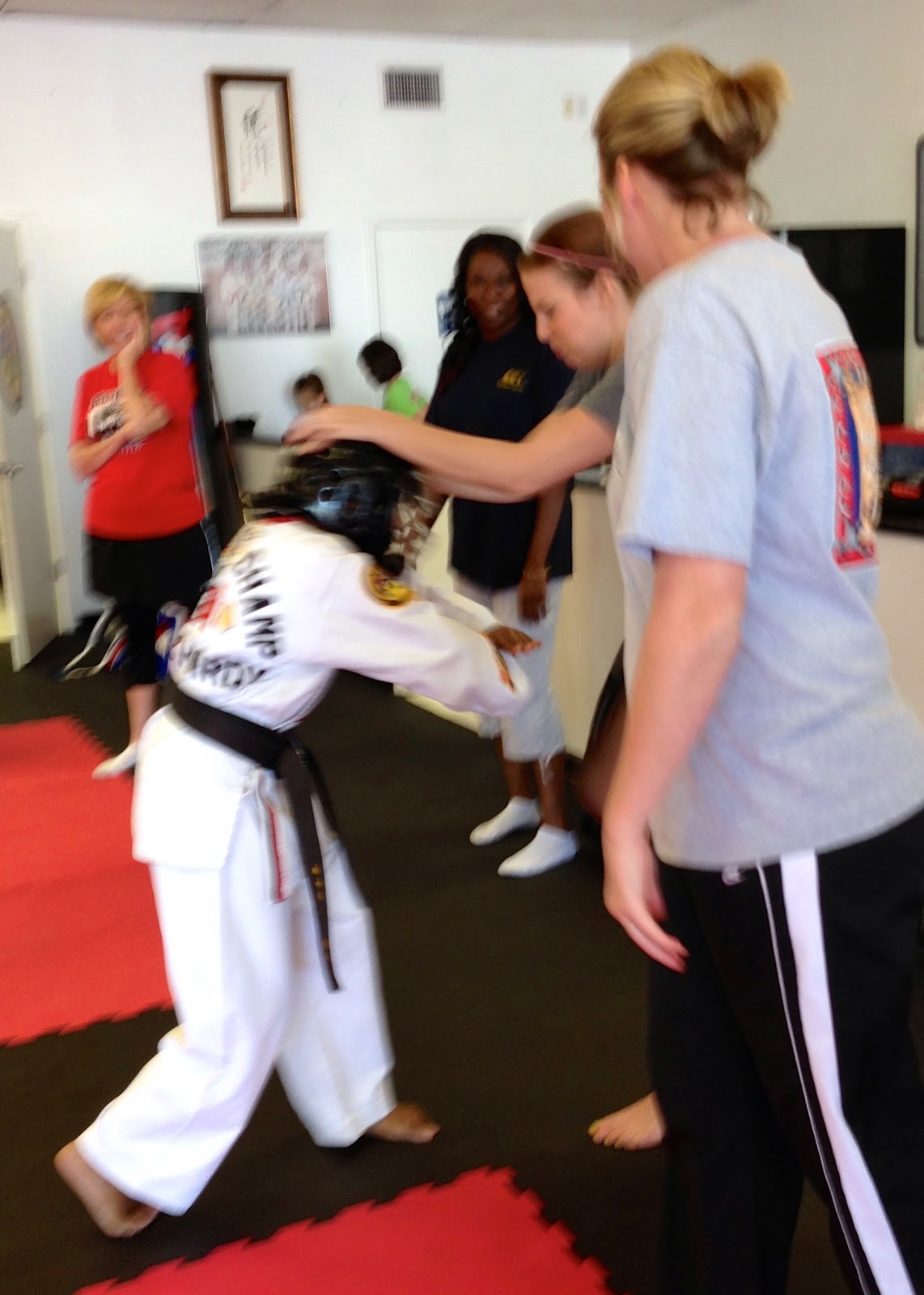 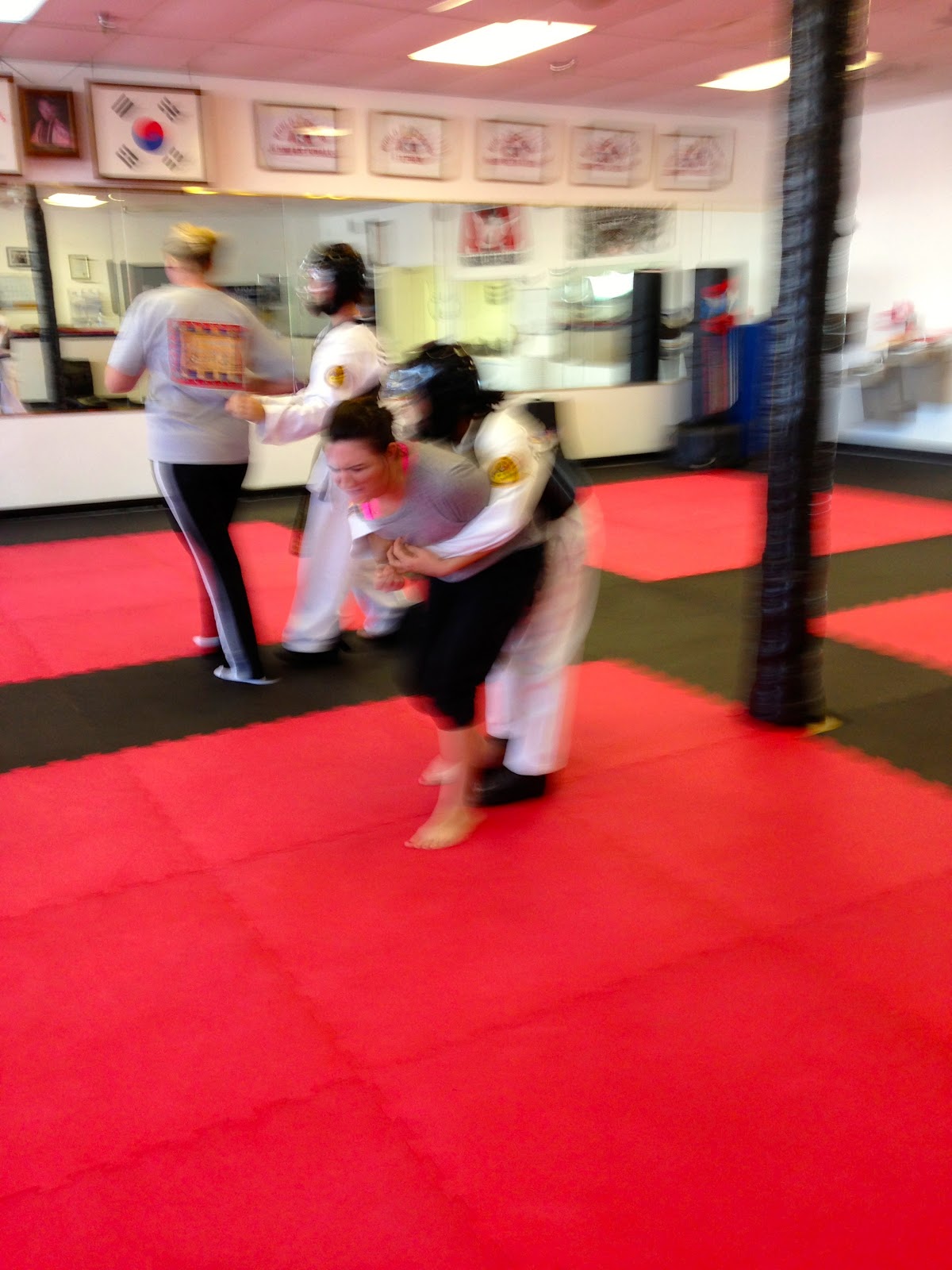 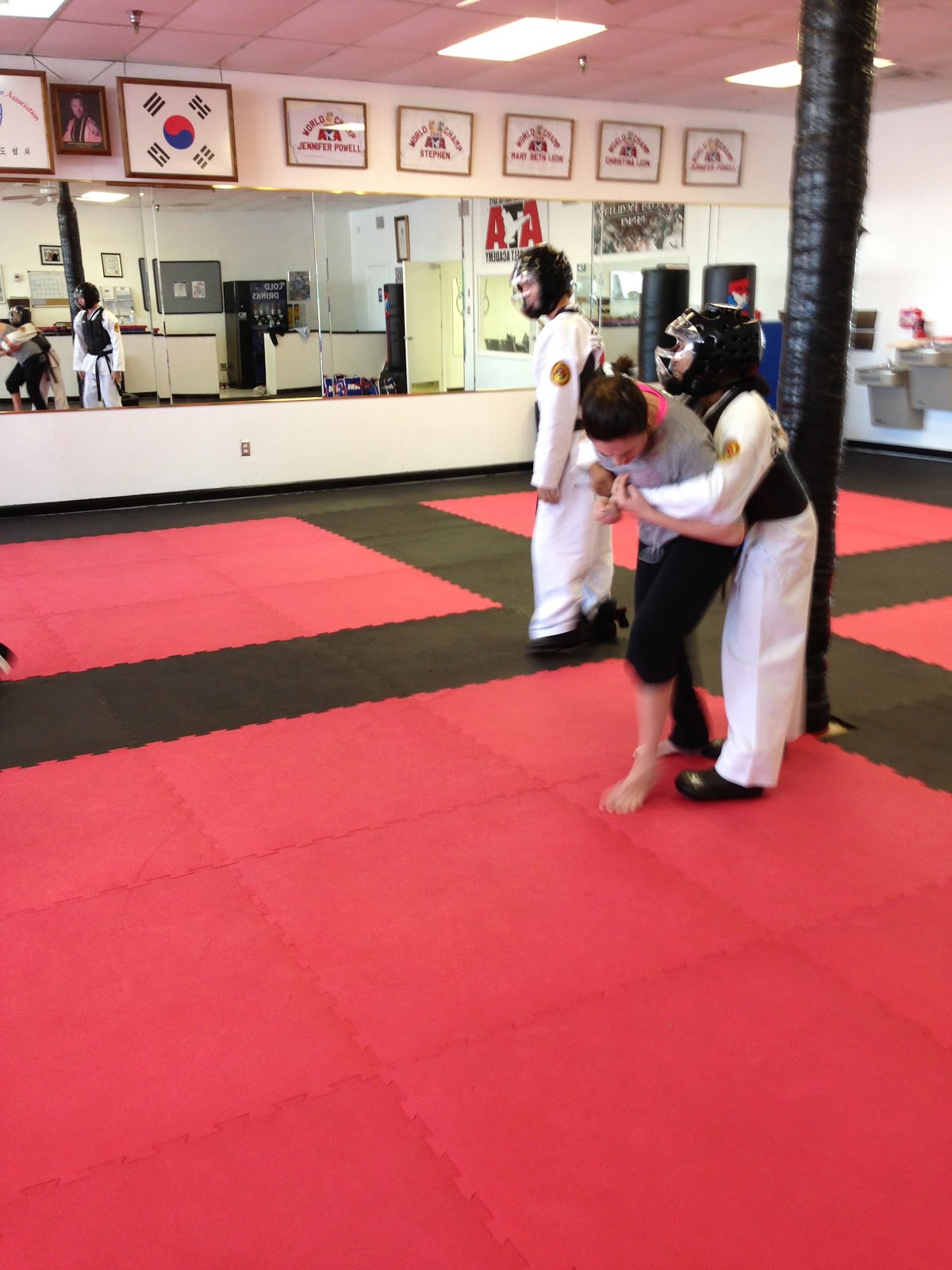 We learned a TON of great stuff…it’s hard to explain all the moves in writing but I do remember several tips to share: 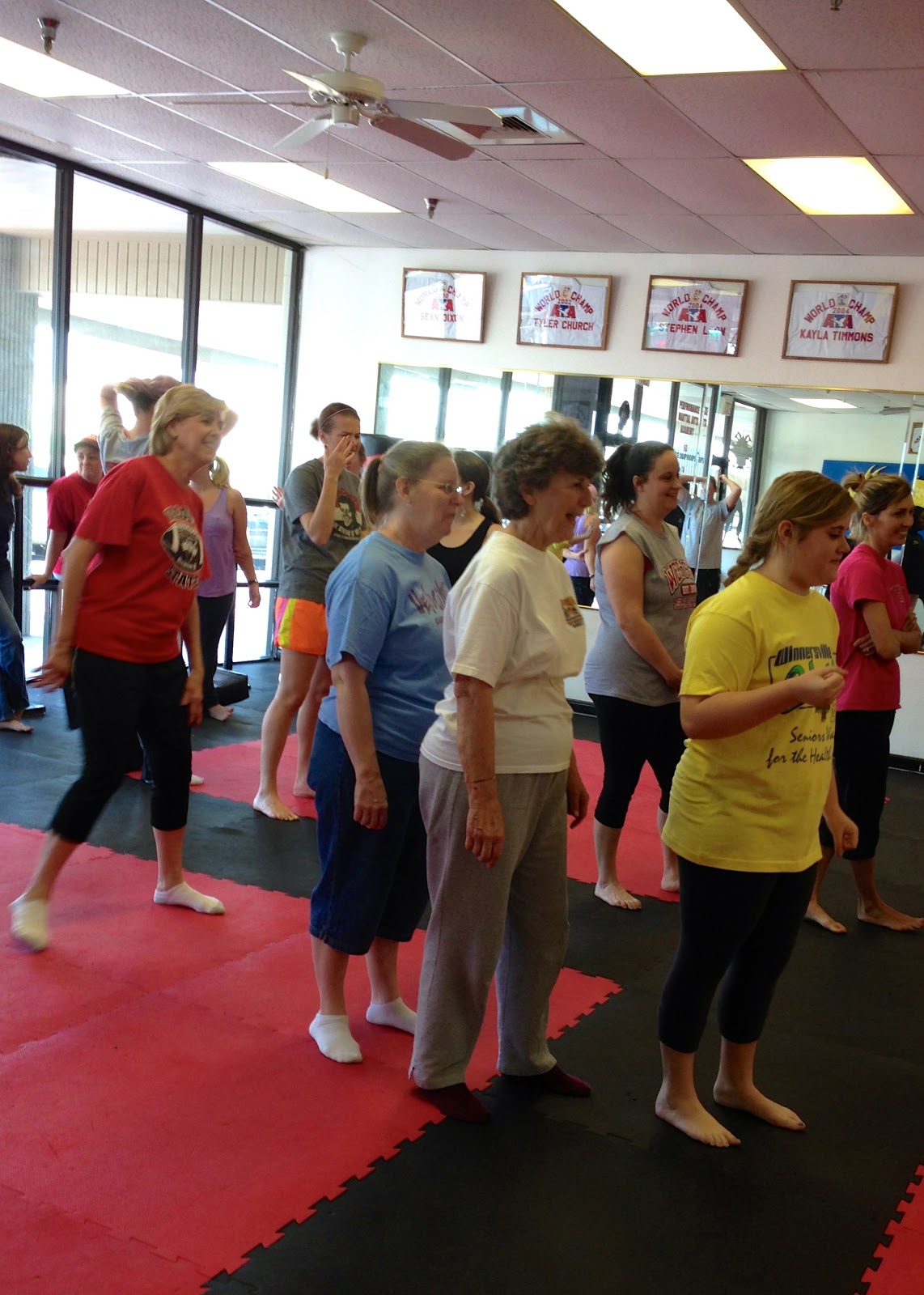 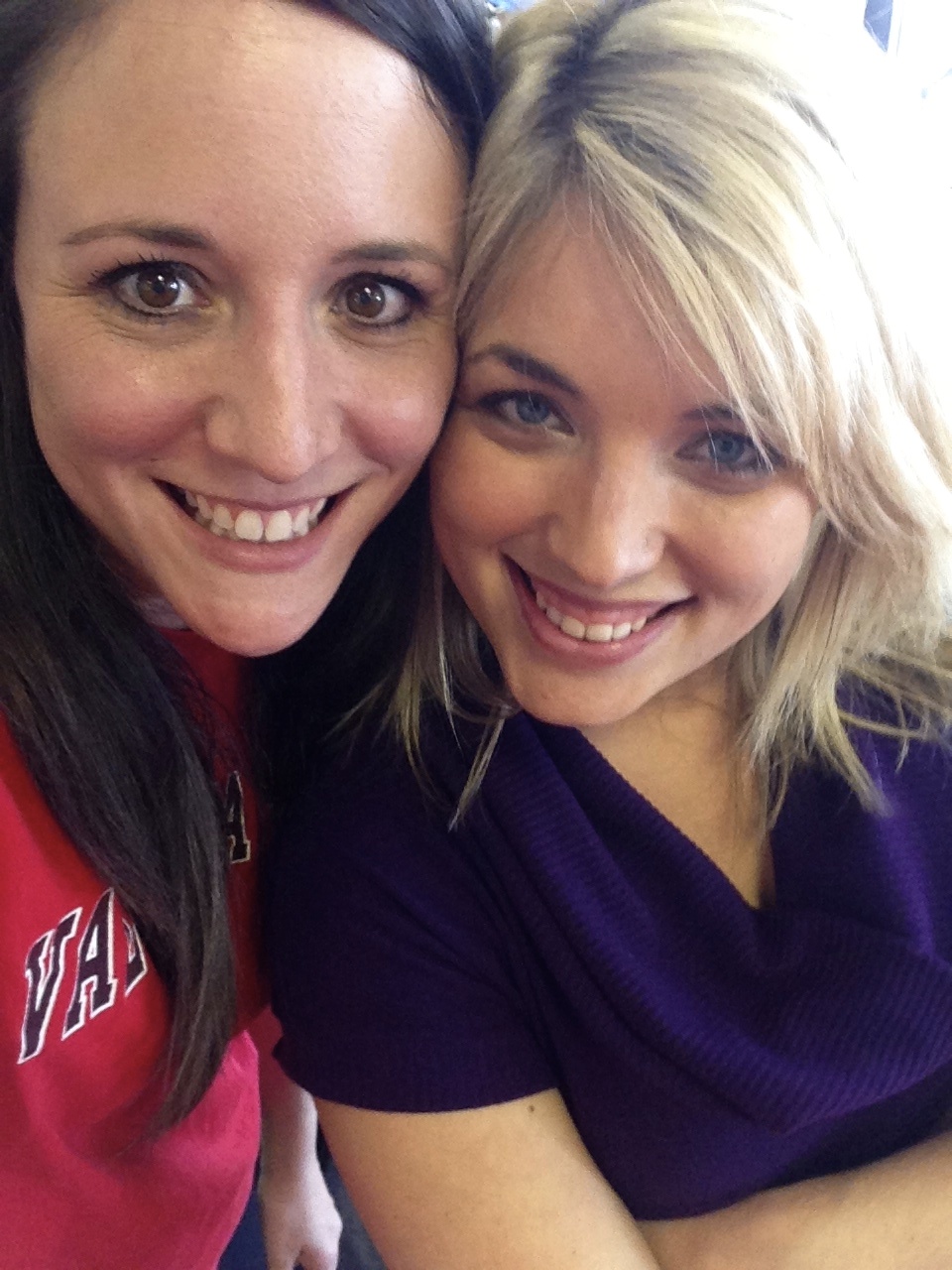 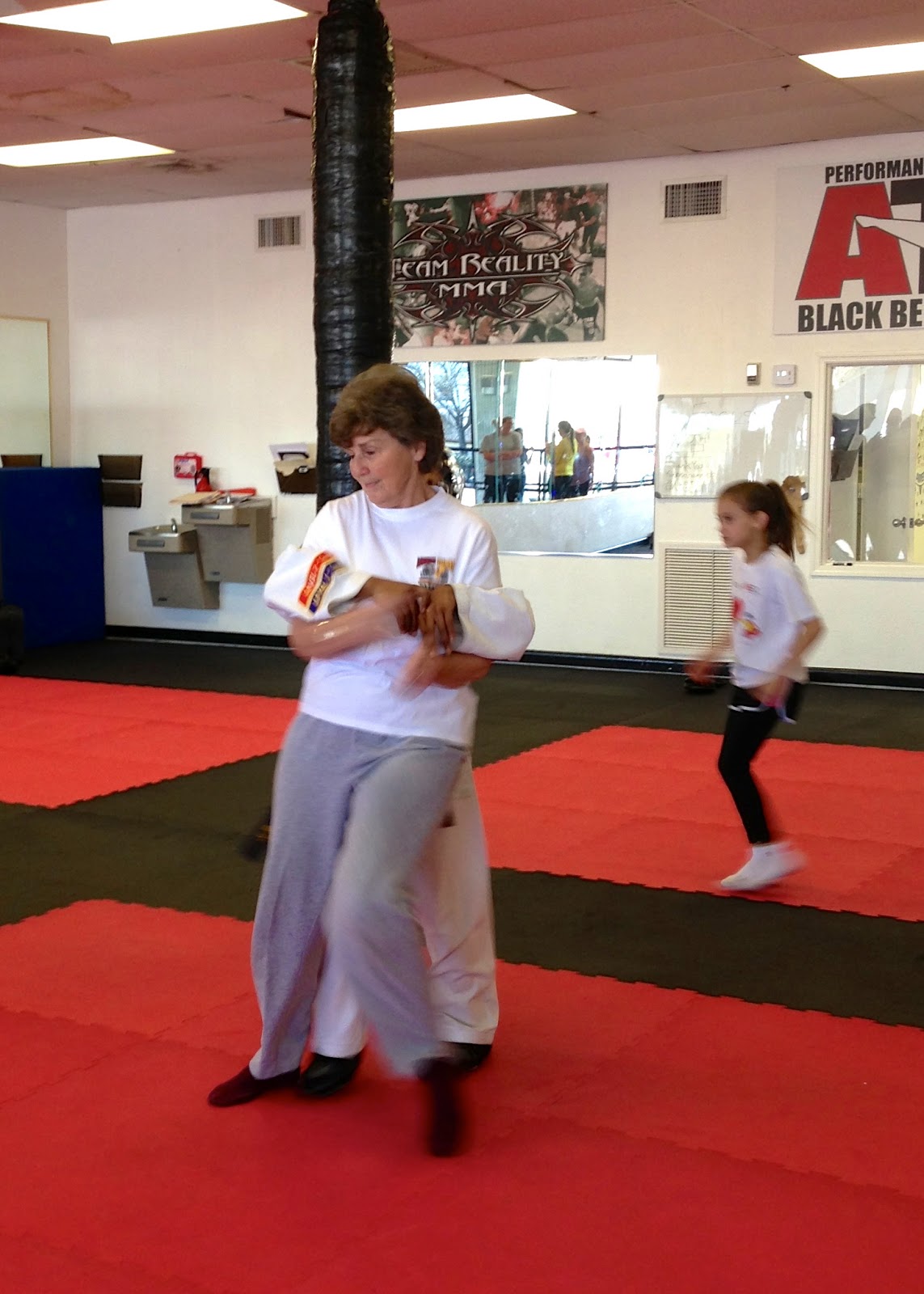 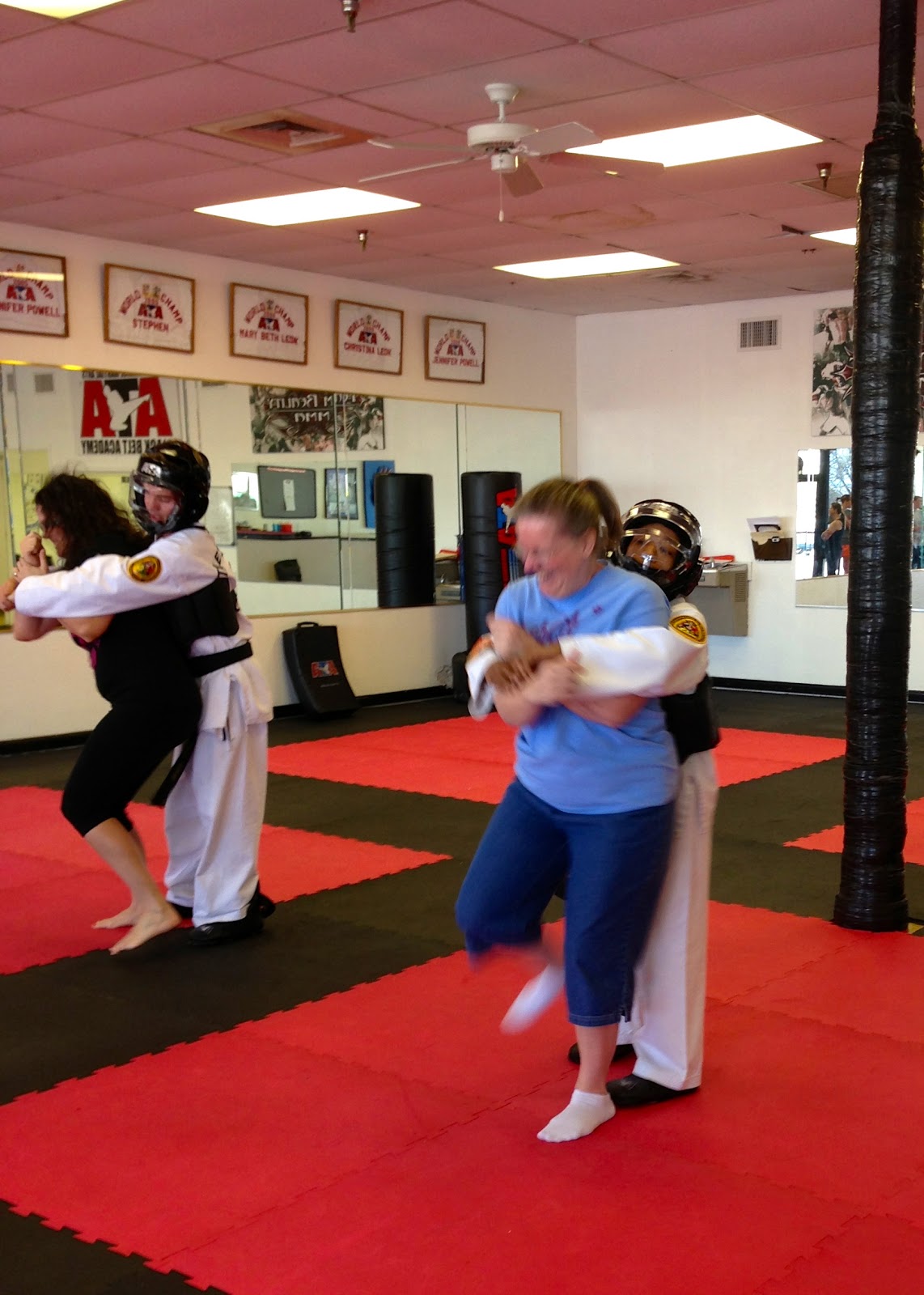 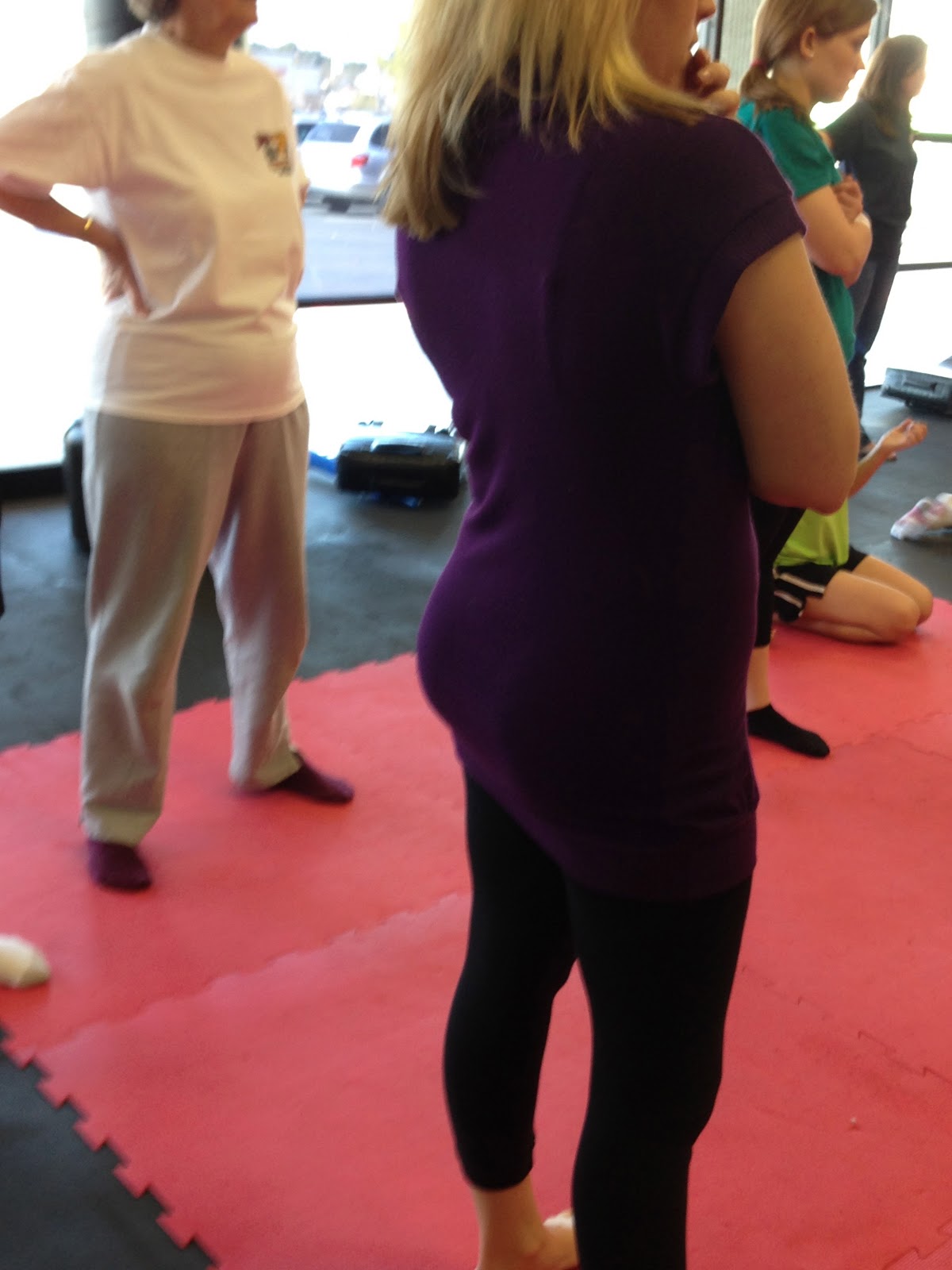 You know me, I totally asked for a group shot at the end 🙂 A few people had already left but these turned out funny! 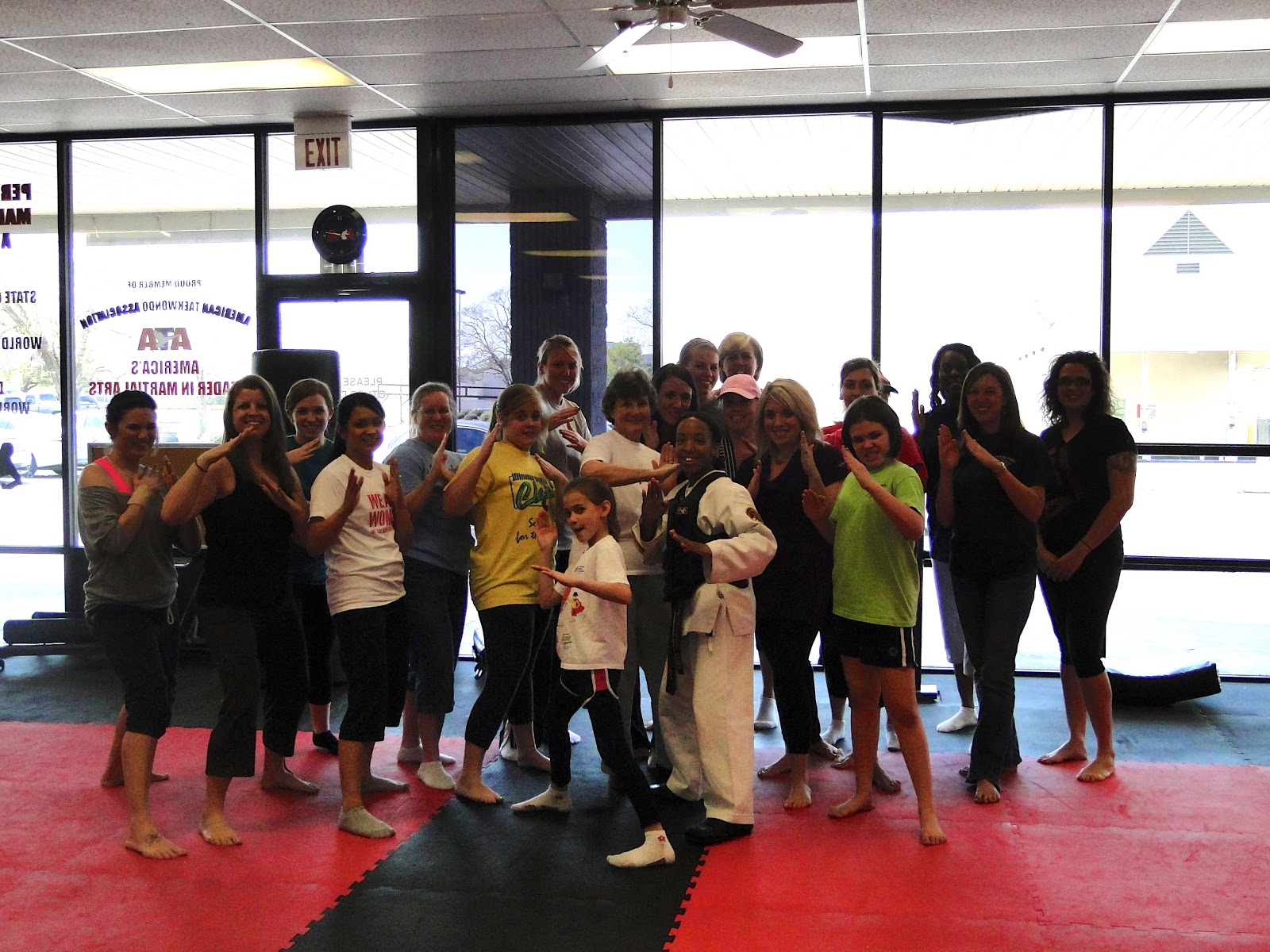 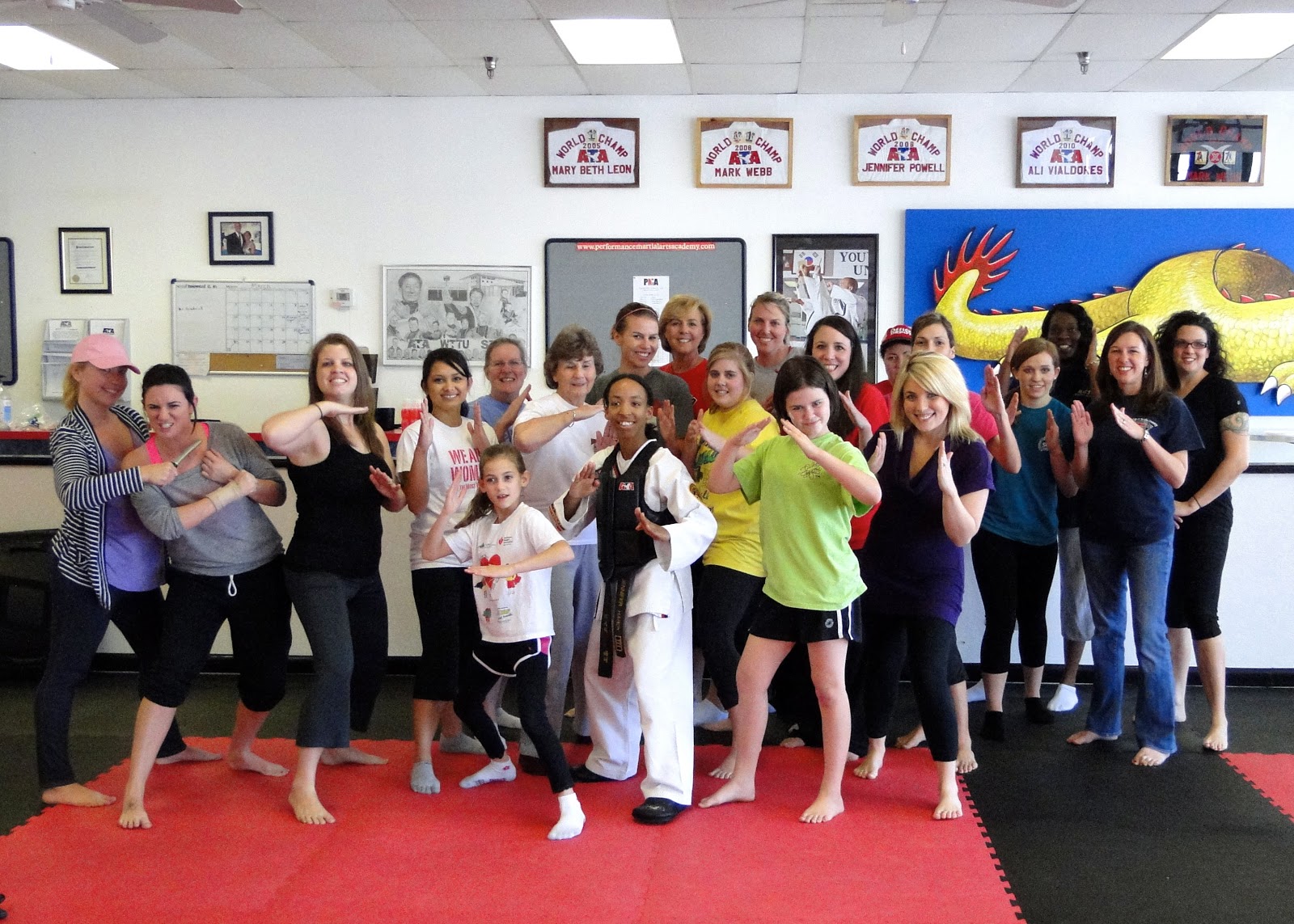 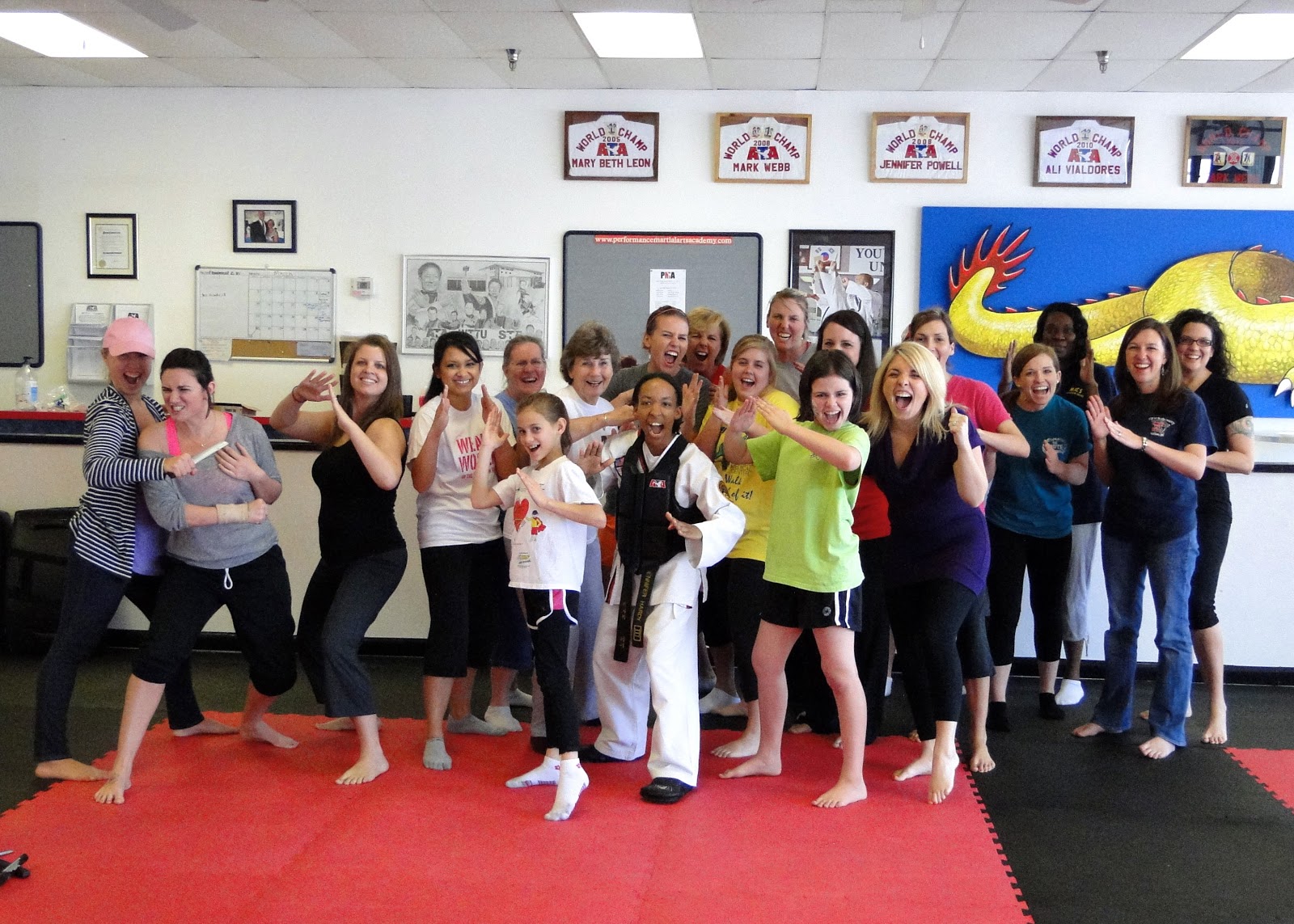 Zach may have teased me before I went to the course but when I got home and showed him the moves he said he was honestly impressed and that many of the moves would for sure work even on him being so much bigger than me!

The next few days after the course I was all crunk and felt so big and bad walking around. Casey and I ran to the store on the way home and I was telling the bag boy how I could totally take him down. He asked if we needed help with our bags to the car and I was like “what do YOU think?” hahaha It totally gave me SUCH an empowered feeling and honestly made me want to take some kick boxing classes or something. I REALLY enjoyed it!!!

While I hope and pray none of us have to use the skills we learned, I do feel like it’s such an asset to have this knowledge. I am hoping to re-take the course yearly or even semi-annually as it’s something that I know I’ll forget over time. I’m SO glad so many awesome women came out that day! We all had fun and learned some valuable tools!!!

Have you ever taken such a course??? Got any tips to share about keeping ourselves safe? Sadly, our world is only getting scarier and scarier and each of us needs to always be aware of our surroundings and able to protect ourselves and our children in case a situation of need arises!!!