Kye goes to school only three days a week, but his school offers classes for five days a week. So far, this hasn’t meant that Kye has missed out on anything for the two days he doesn’t go, until Service Day came! It was on a Thursday and, since Kye doesn’t go to school on Thursdays, they invited me to bring him up there so he could experience the fun! They had an ambulance, fire truck, and police car at the school with each professional giving a 15 min or so lesson to the kids. It was very educational and a great chance to see some trucks…with a two year old trucks are where it’s at 😉

We had a fun play-date at Chickfila that morning then headed up to the school and joined in with one of the classes during their presentations. First up was the ambulance!

I even learned a little something…did you know when an ambulance or funeral or anything else is coming that you are supposed to pull over to the right side of the road? Even if you’re in the opposite lane of traffic you still pull off to the right until they can pass. 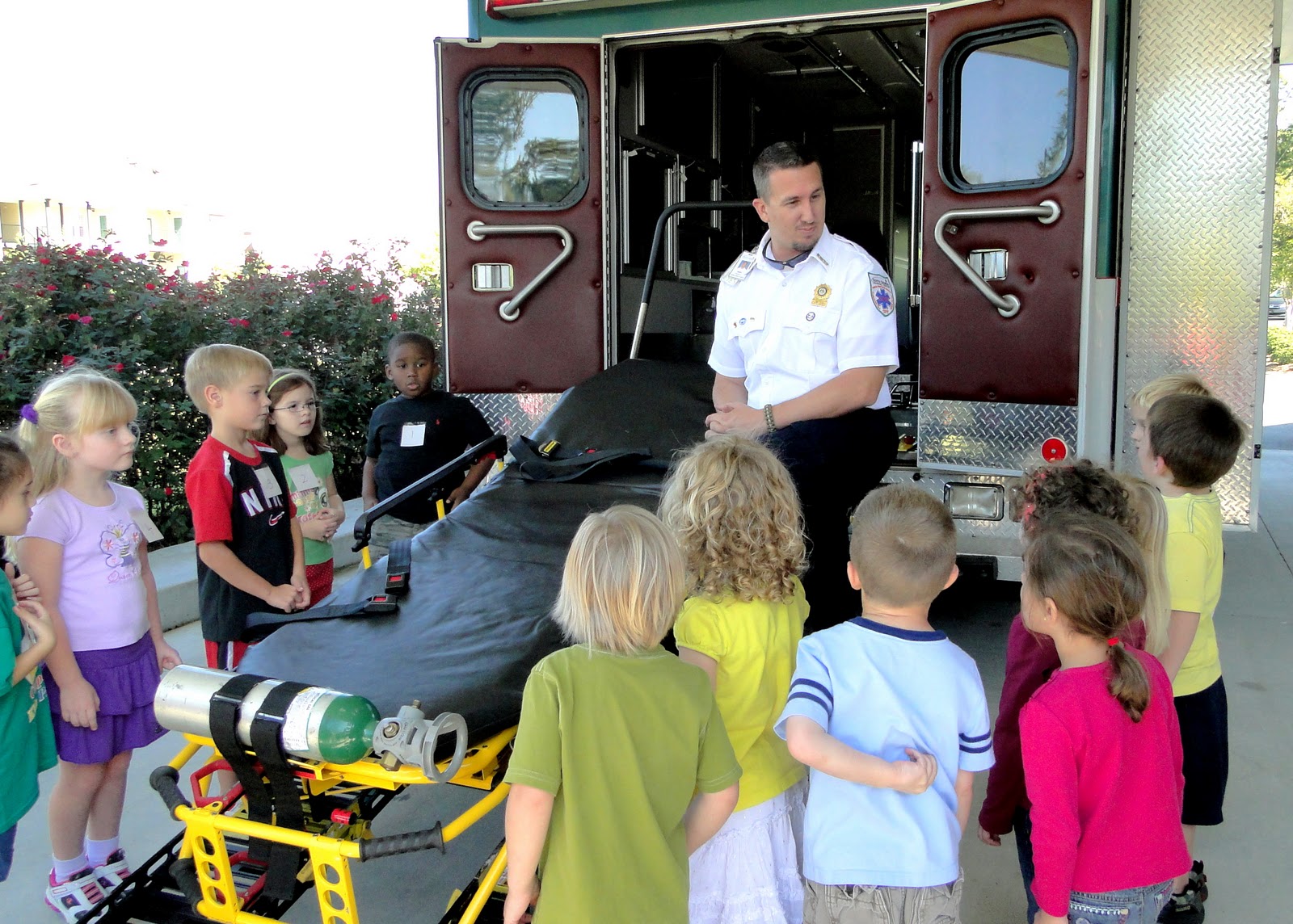 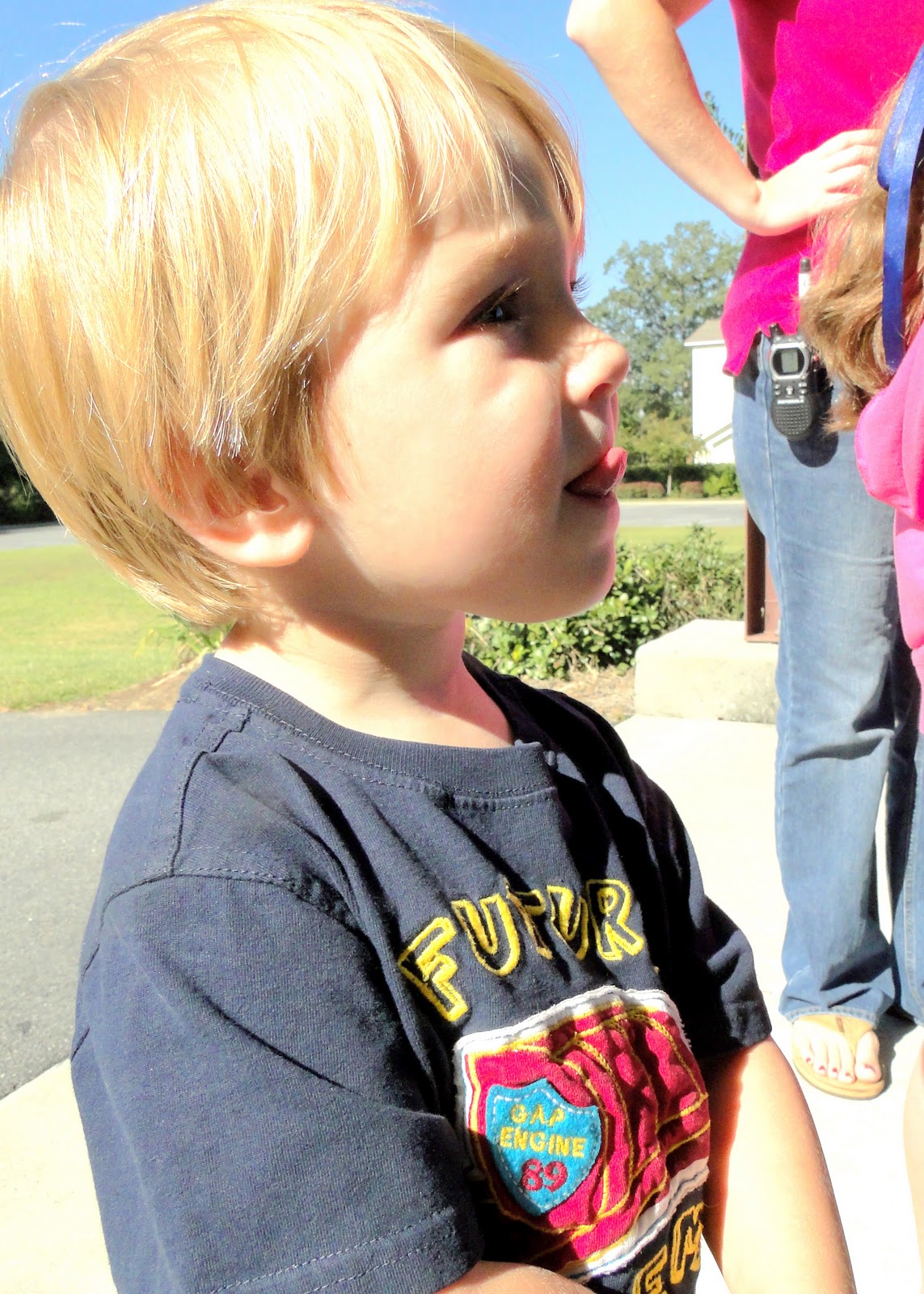 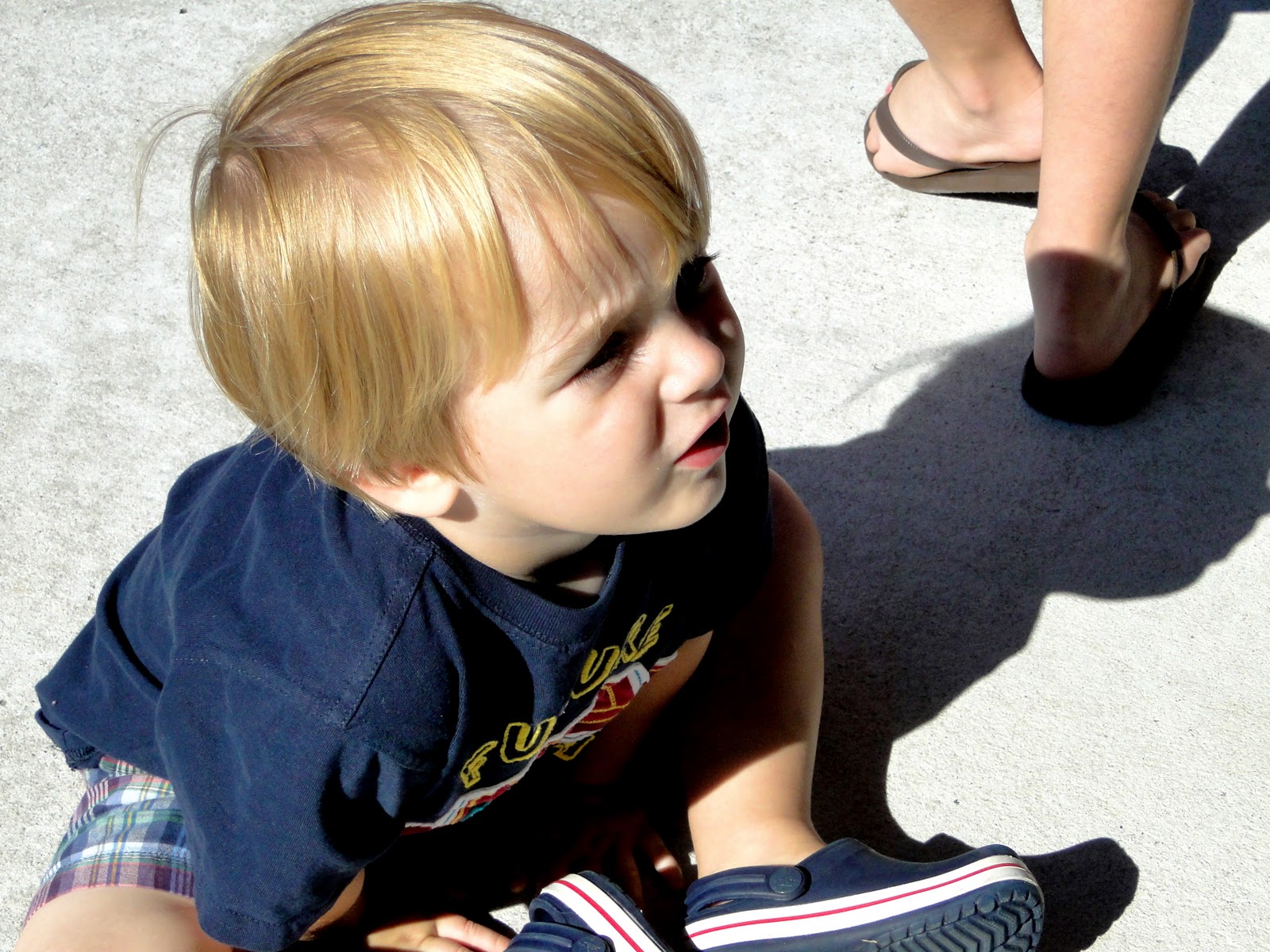 seeing the lights and hearing the siren 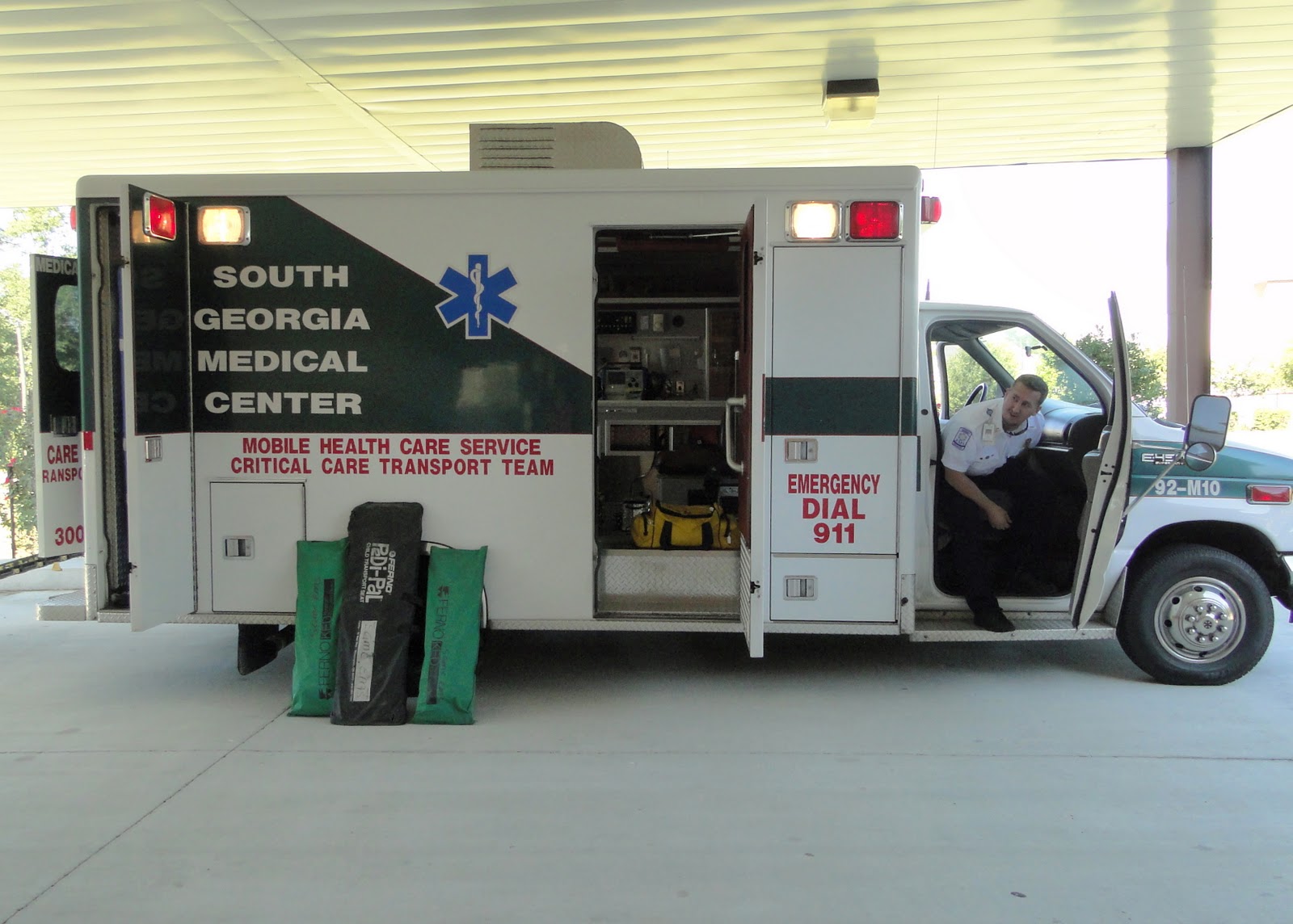 covering his ears from the noise 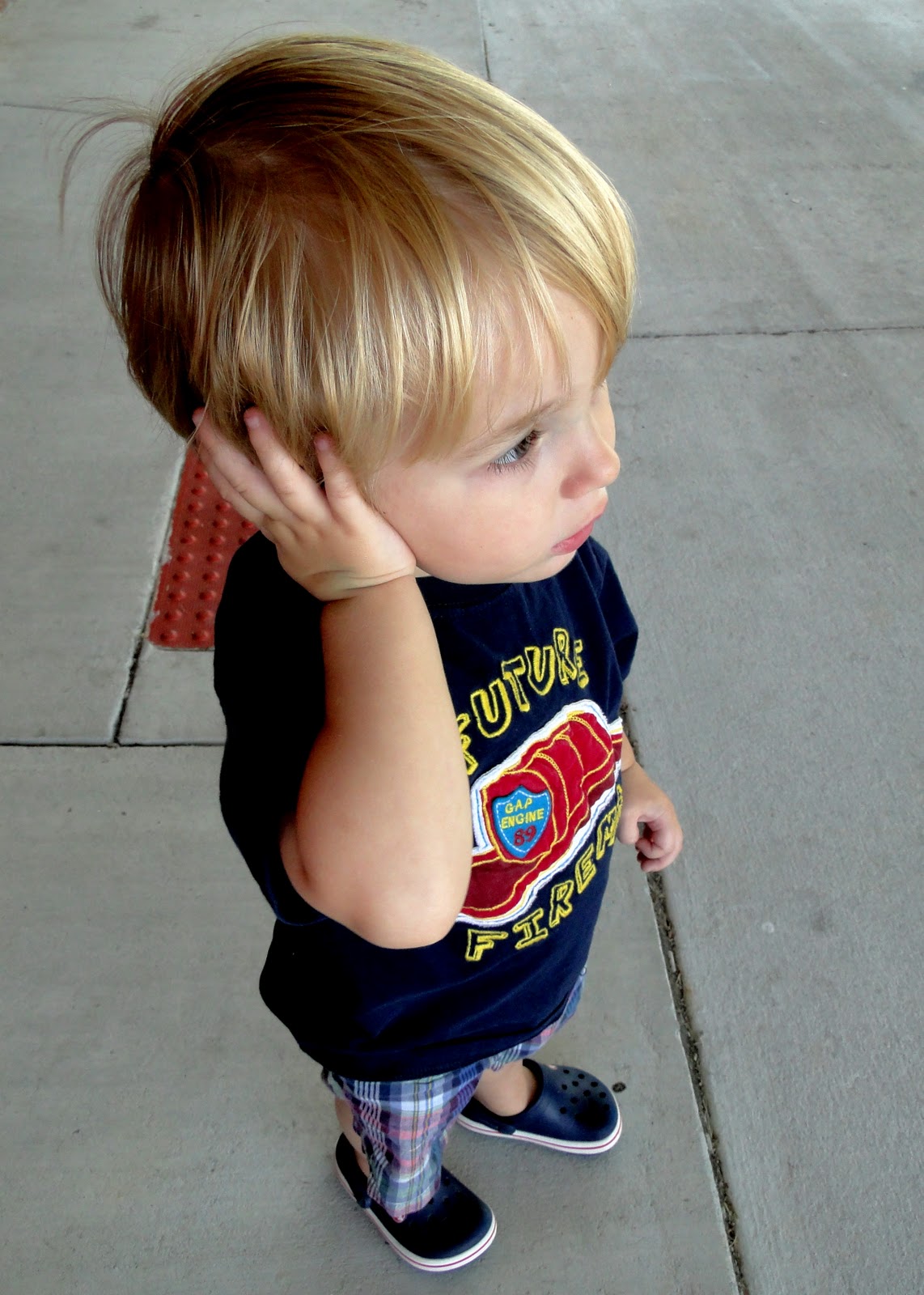 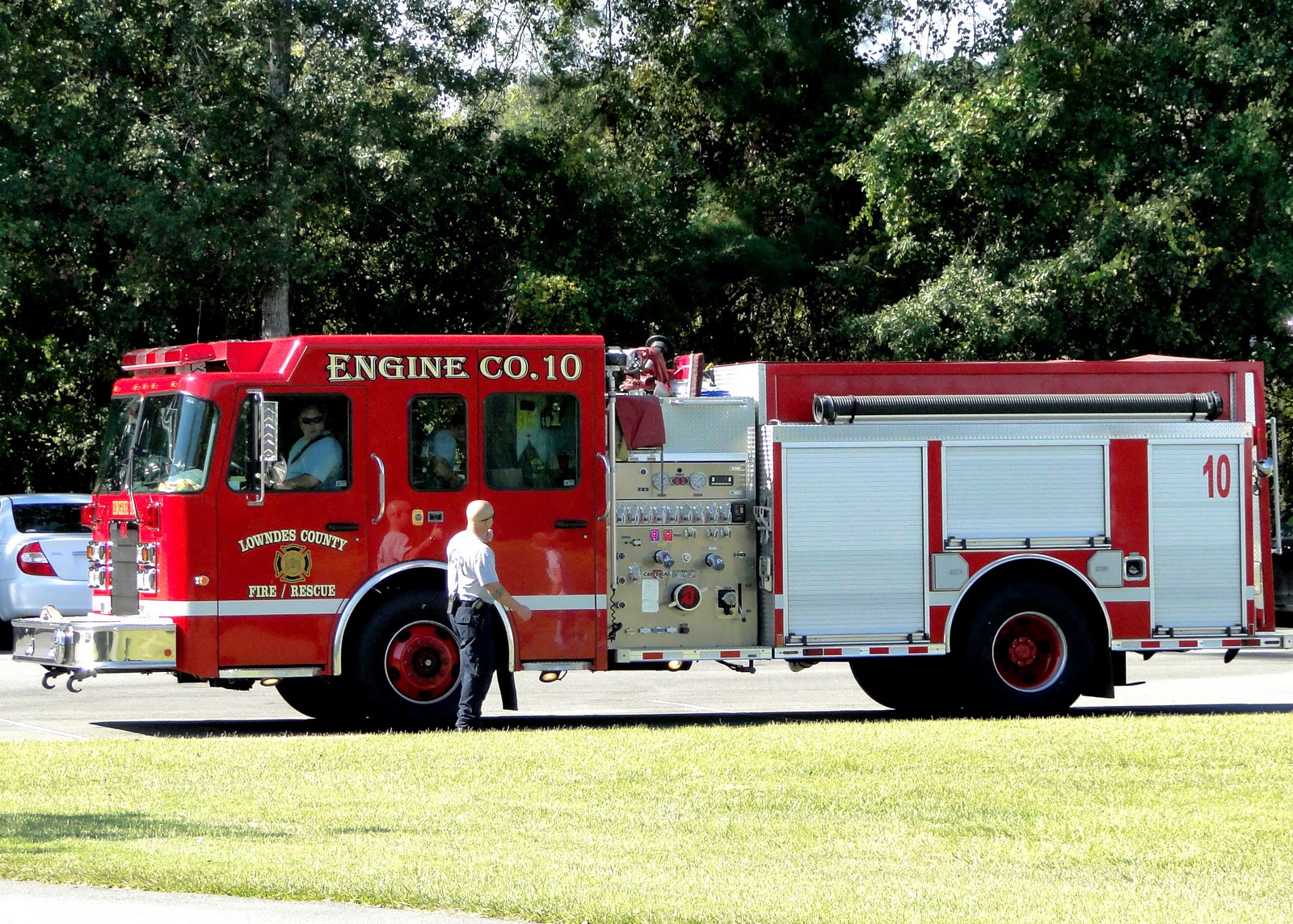 When we were at Chick-Fil-A that morning we were meeting some friends and the boys all played a ton in the playground. Kye kept playing with this little boy and kept calling him by name so I realized they must be in the same class at school! I asked the boy and, sure enough, they are! It was cute to see them play together (and especially share SO well!) and I asked his mom if they were going to see the trucks too. Turns out they were! Kye enjoyed standing with his friend to see the fire truck! 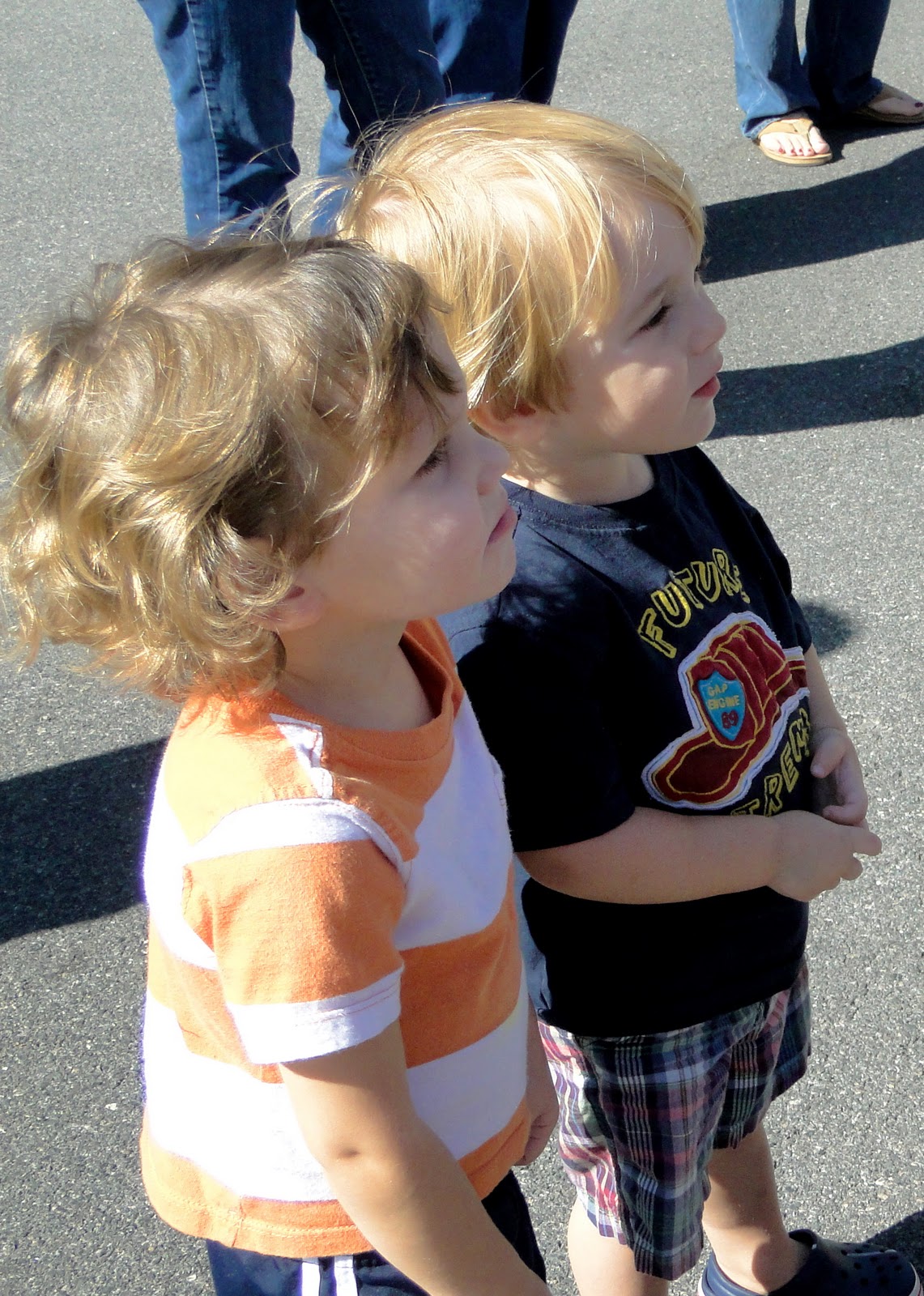 Have you ever seen “the jaws of life” before? Um me either. I was pretty shocked that he showed us them and that he talked about them…I mean no one really wants to know about that right?!? It’s one of those things we all hope we never have to see or experience! 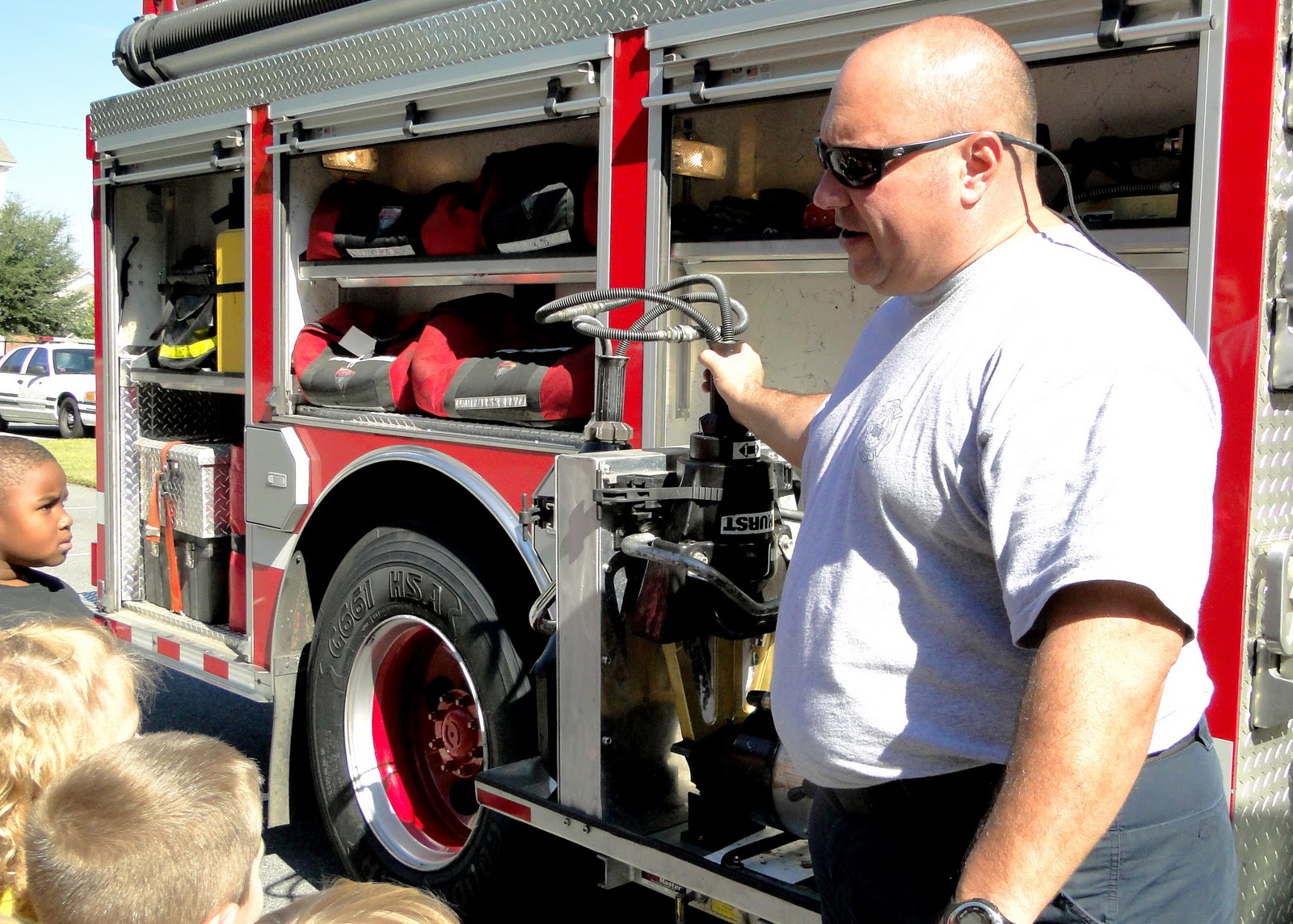 touching the truck and getting to explore all the parts 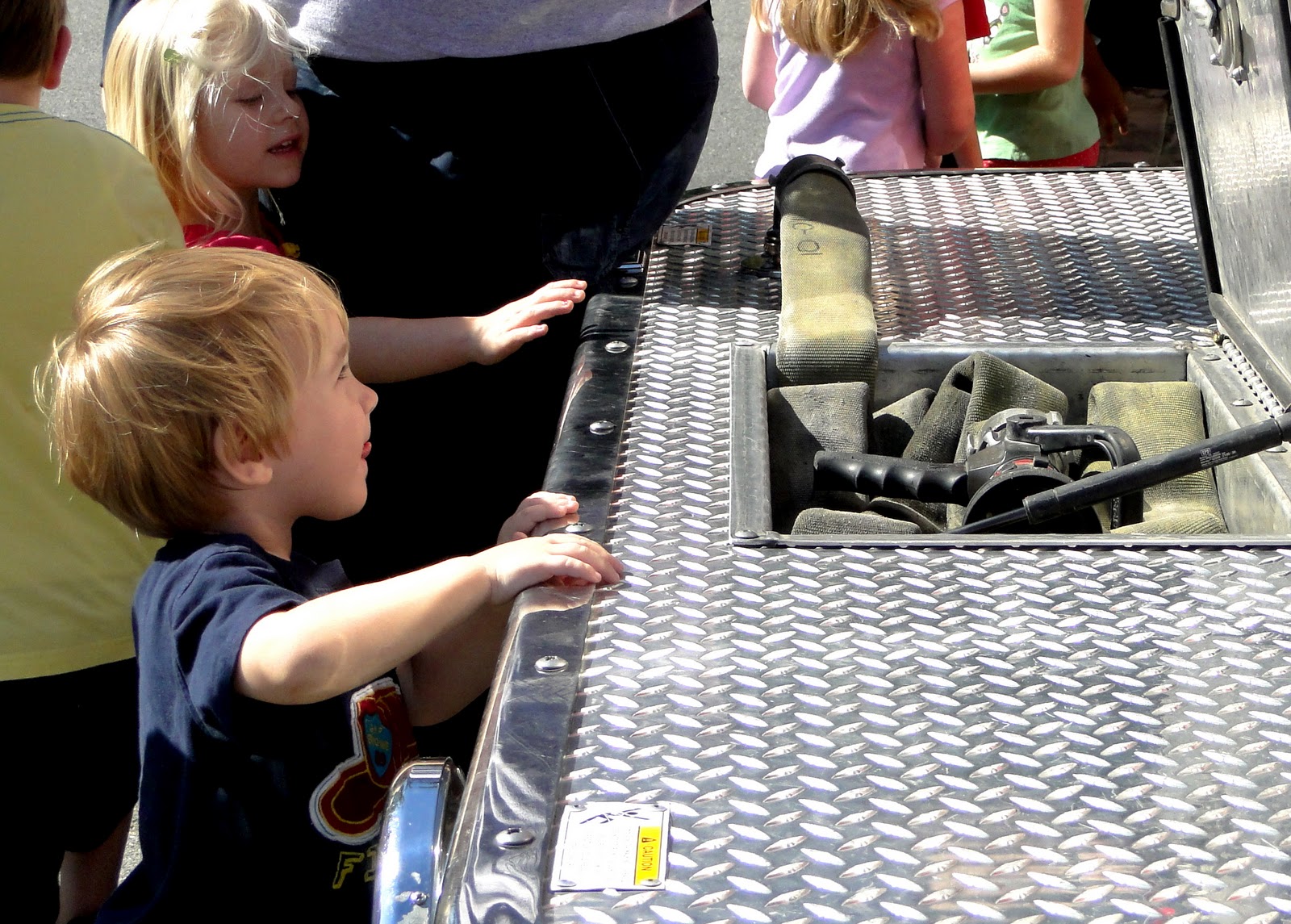 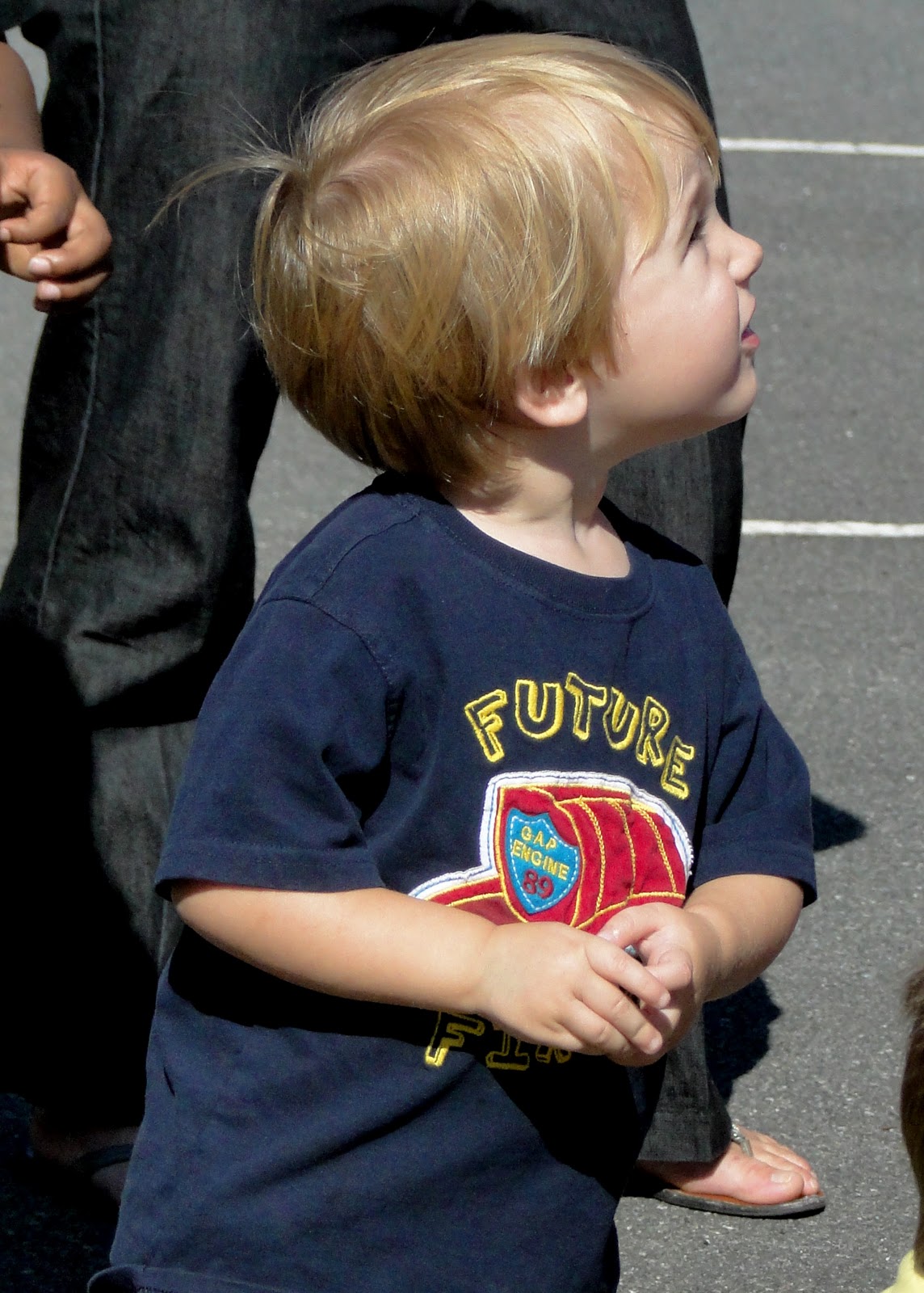 I love how Kye never takes his eyes off the fireman 😉 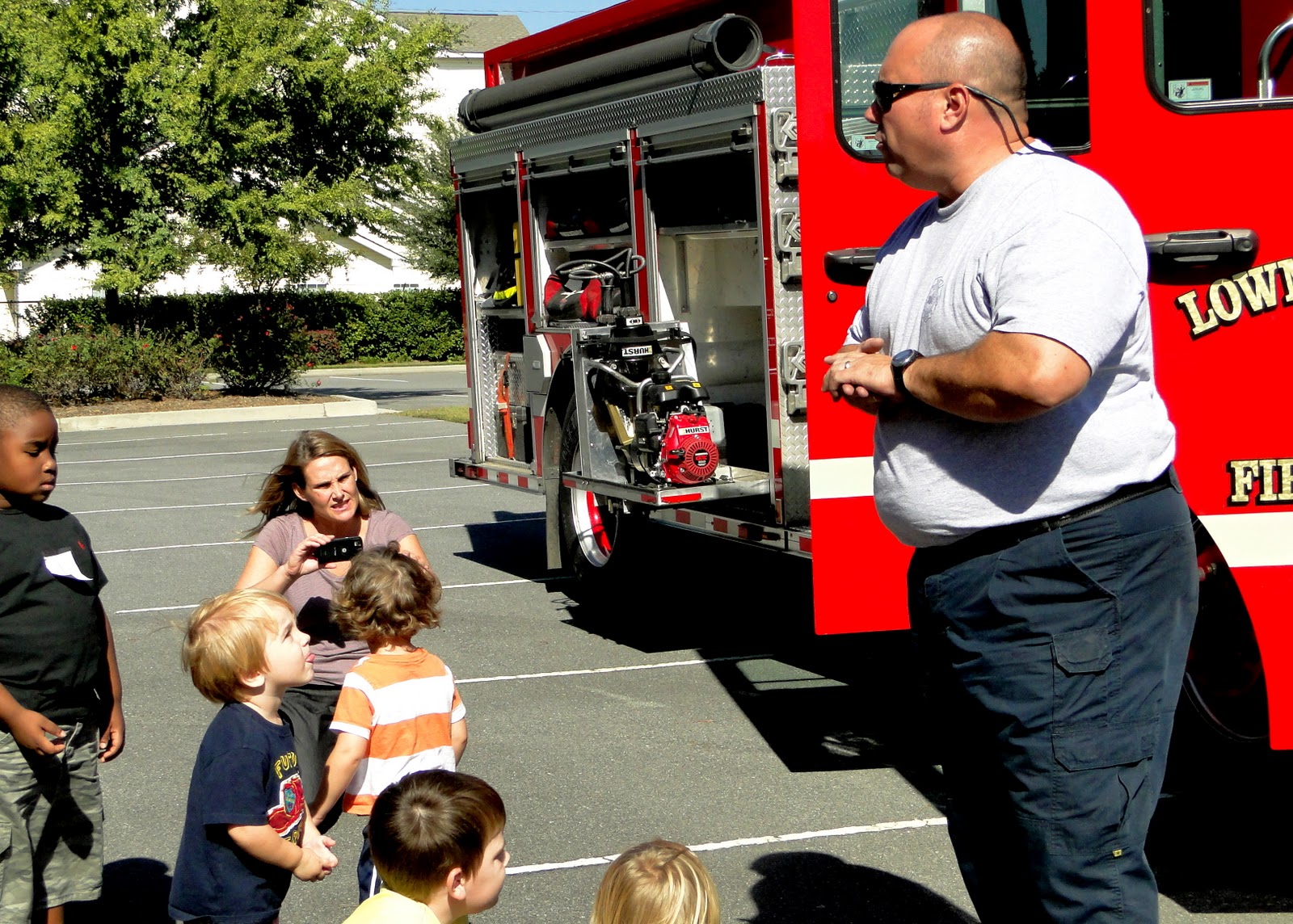 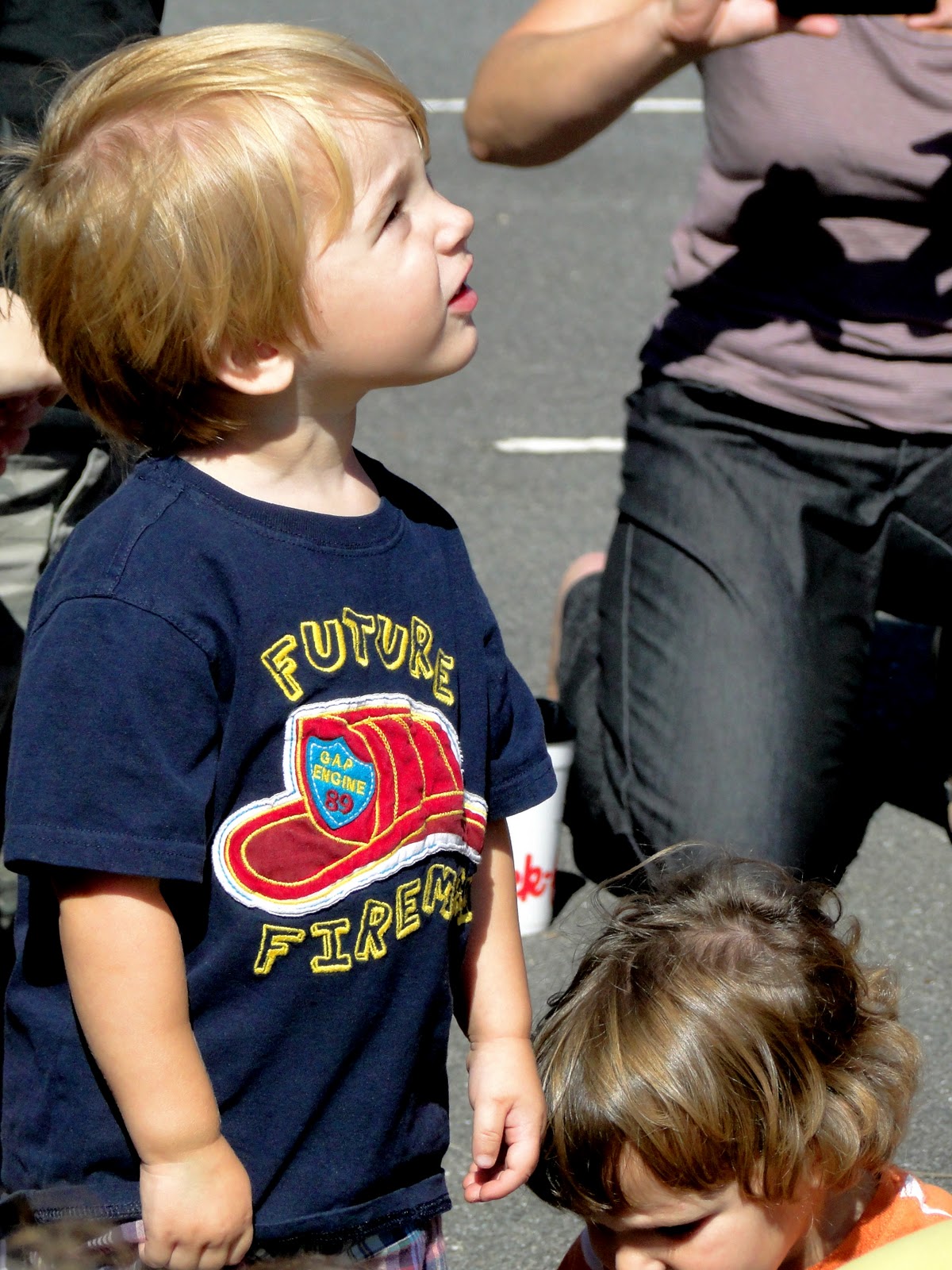 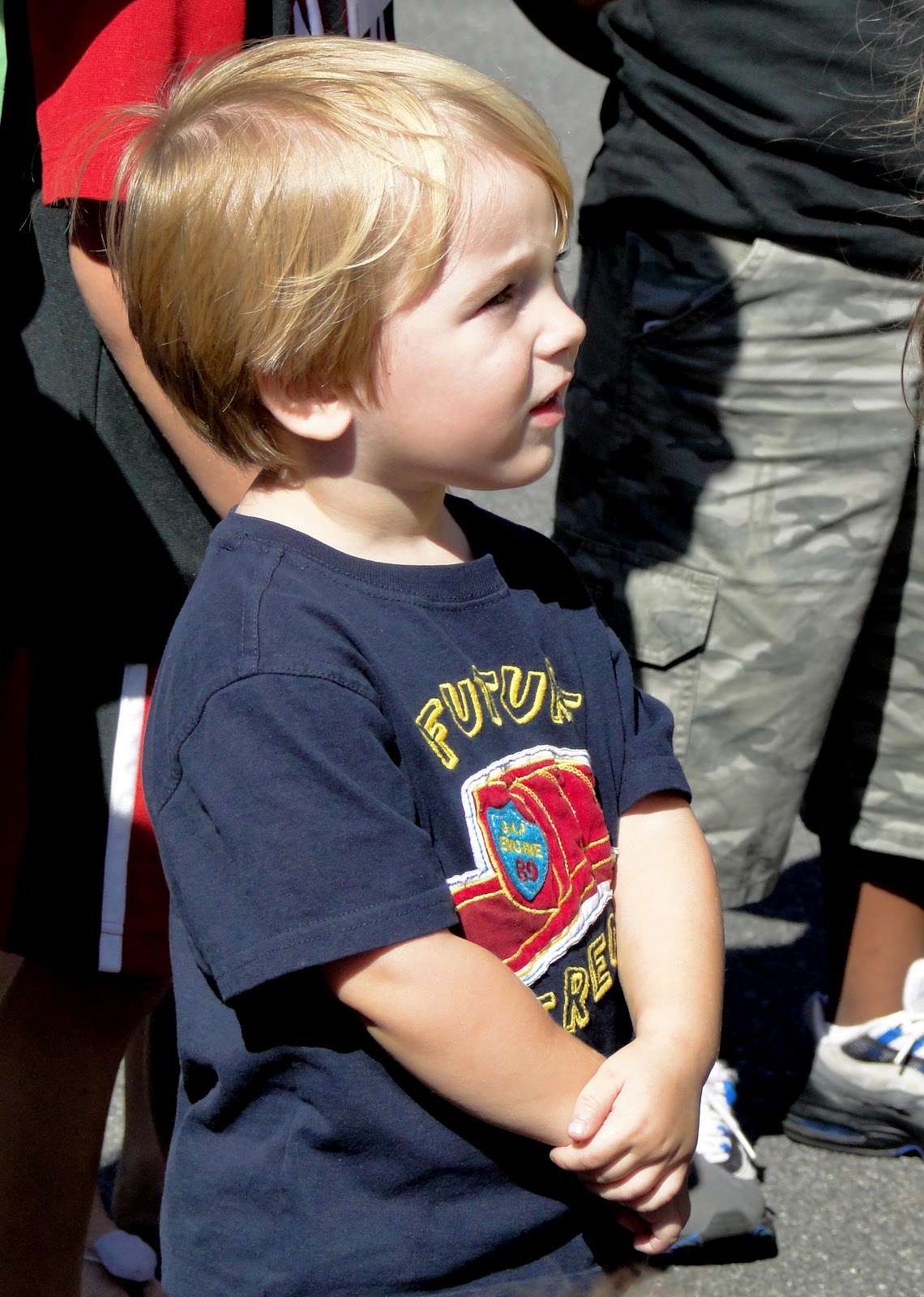 They also did the same thing they do whenever we visit the fire station (you can see our most recent visit here). They discussed fire safety and what the kids should all do if there is a fire in our home. One of the firemen also put on all the gear and, again, Kye wasn’t too fond of it. I can see why it’s scary for a child! I’m thankful for our house lay out and that Kye’s room is directly across the hall from ours because if there ever is a fire we can scoop him up on our way out the door very easily (Blitzen’s is directly beside Kye’s so another easy grab). It’s gonna make me more nervous once baby #3 comes along and Kye moves his bedroom to upstairs. By then we’ll have to have a fire escape plan! 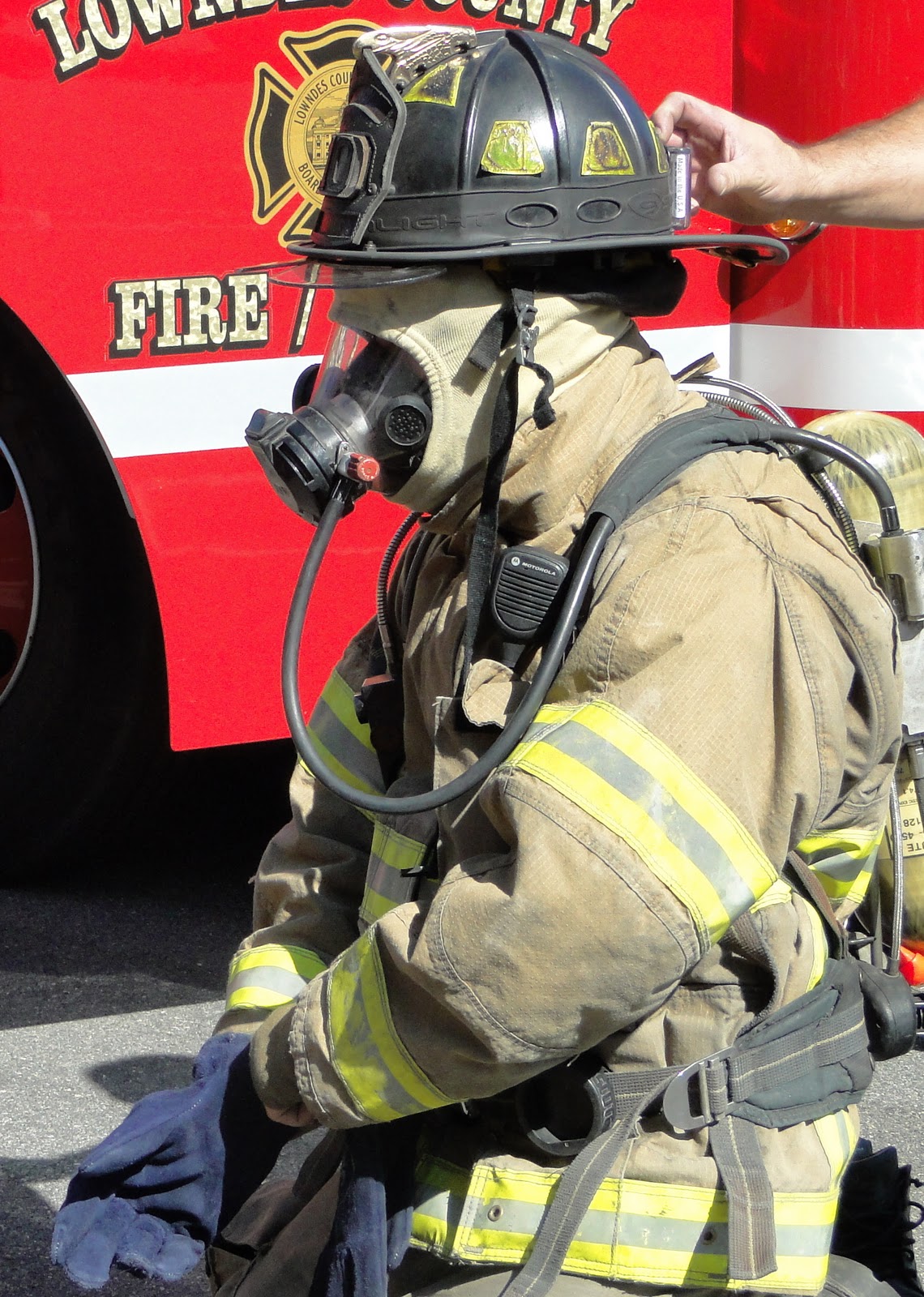 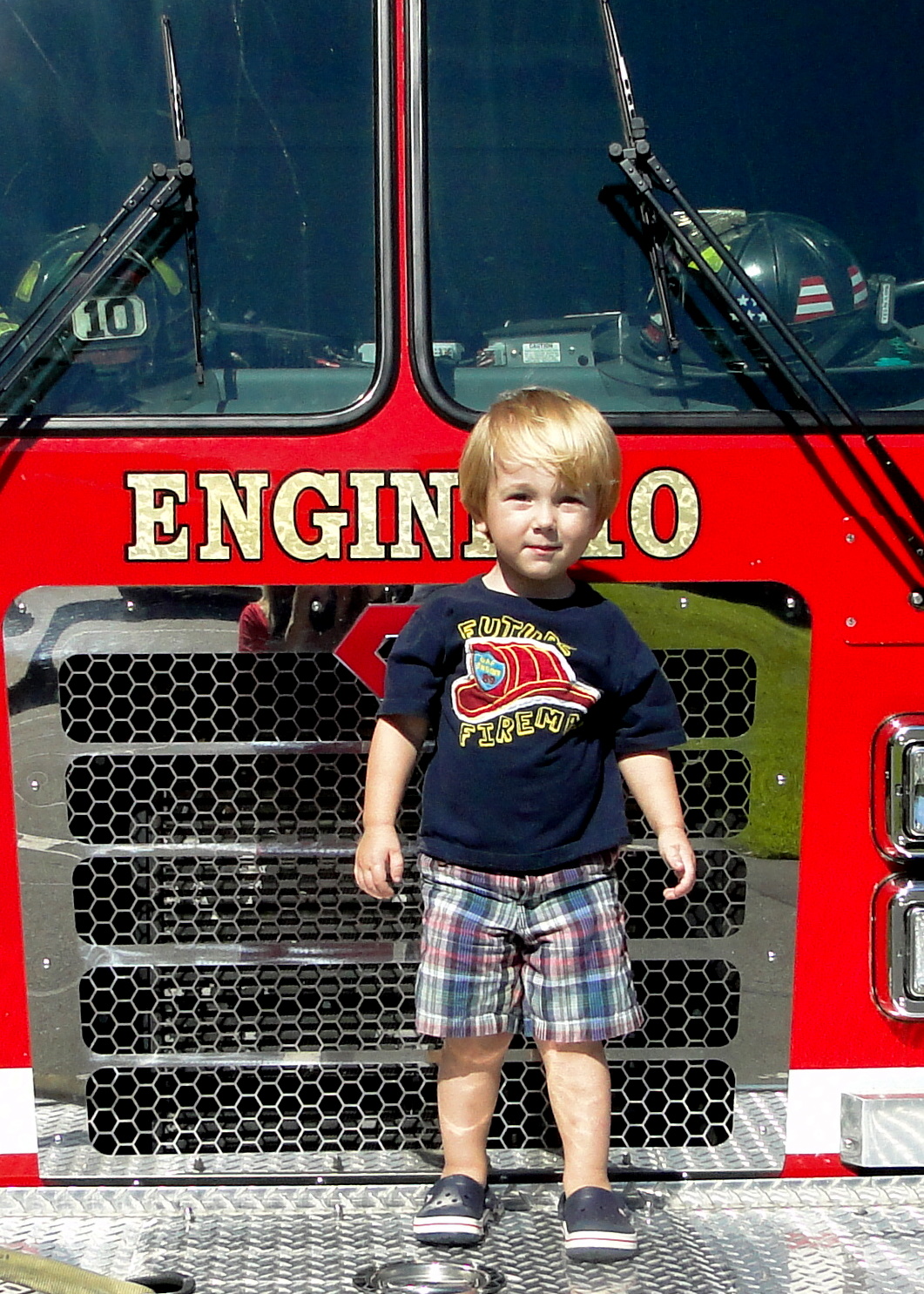 He thought he was so cool getting to stand on the front of the fire truck! 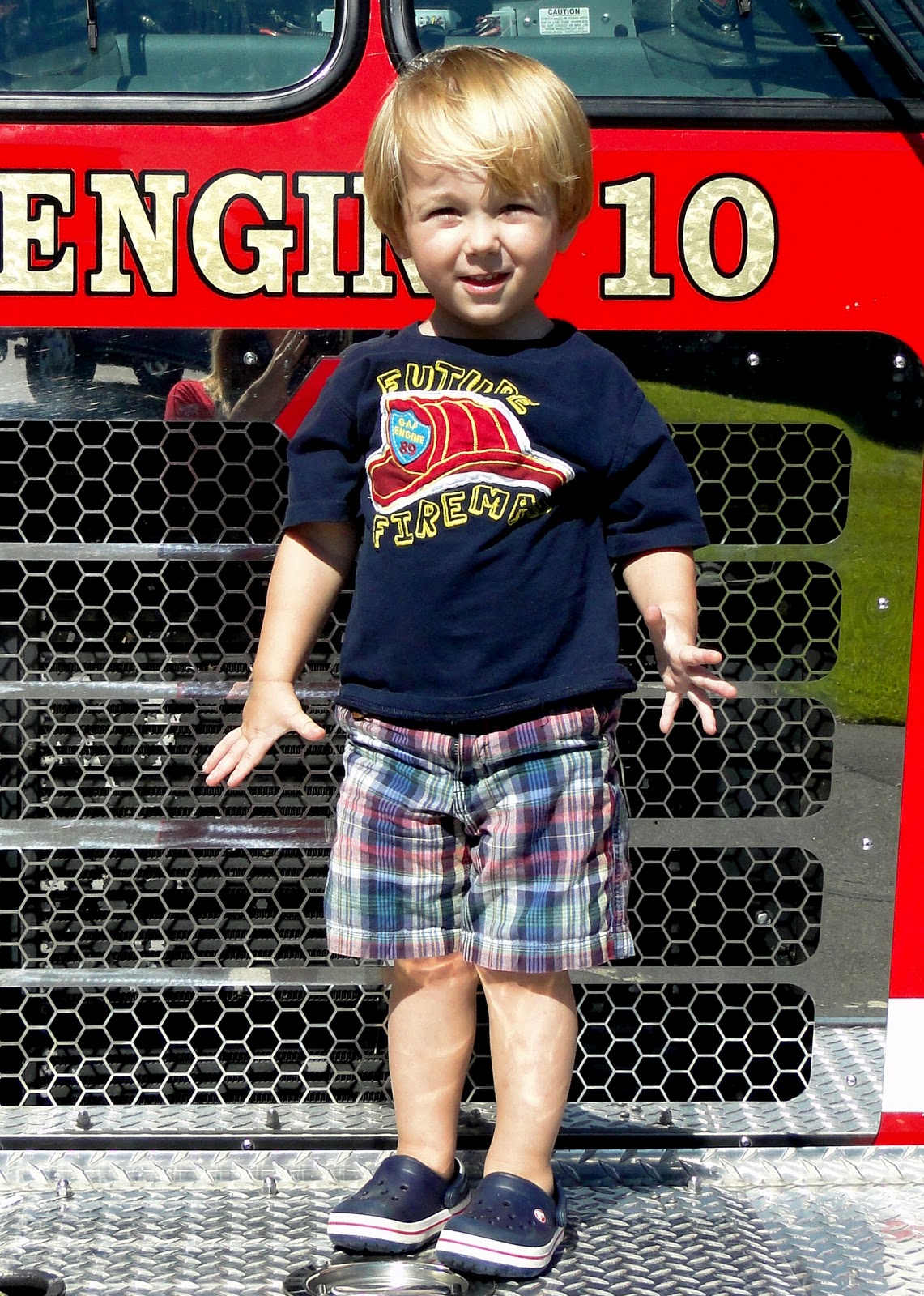 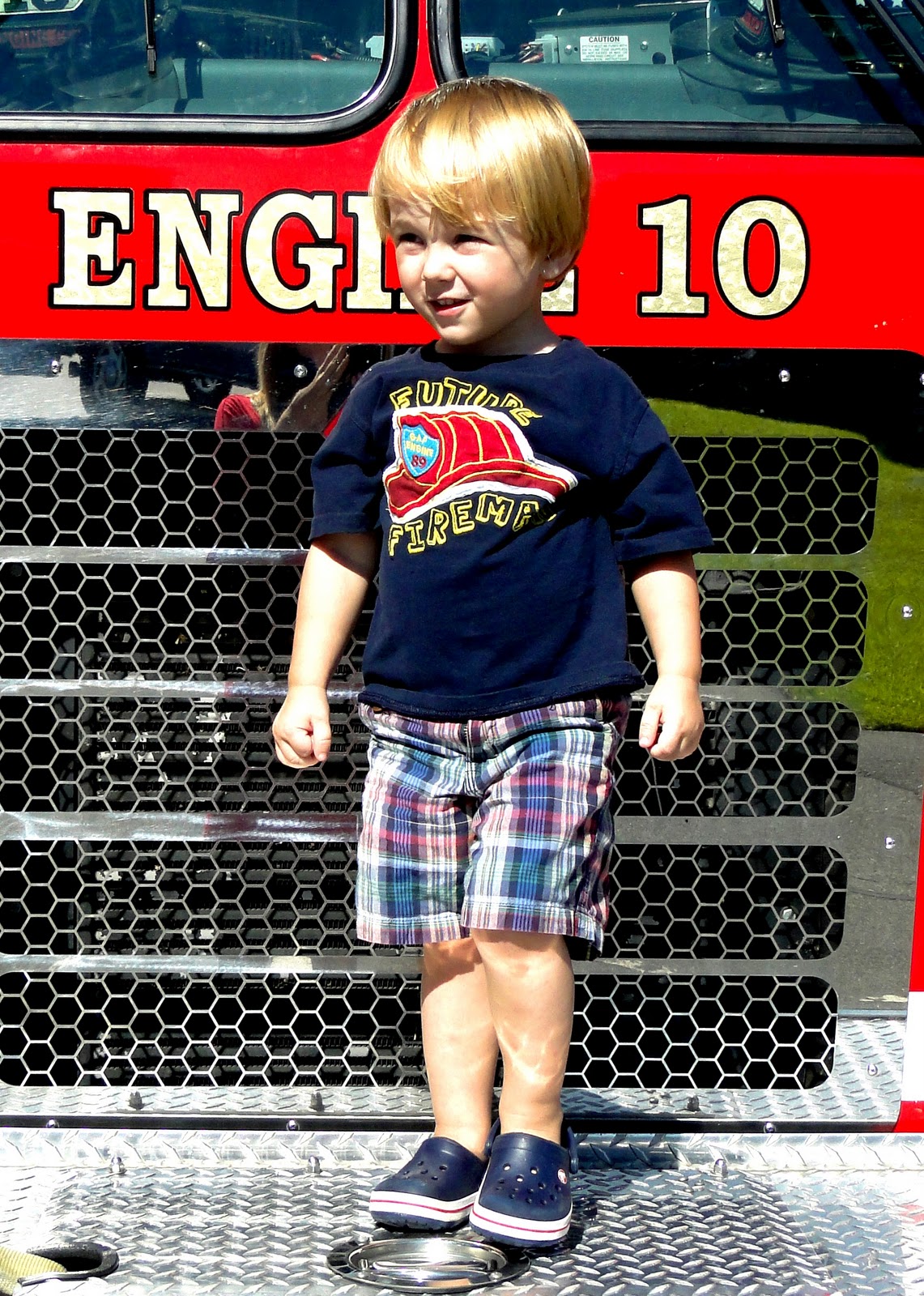 We went back to the ambulance while we waited on the policeman to be ready for his presentation and the ambulance guy brought out a mini ambulance that he drove around and it even talked! It was really neat and the younger kids loved it. We even saw Colt with his class and I tried to stay away from them so Kye wouldn’t distract Colt and cause any problems! 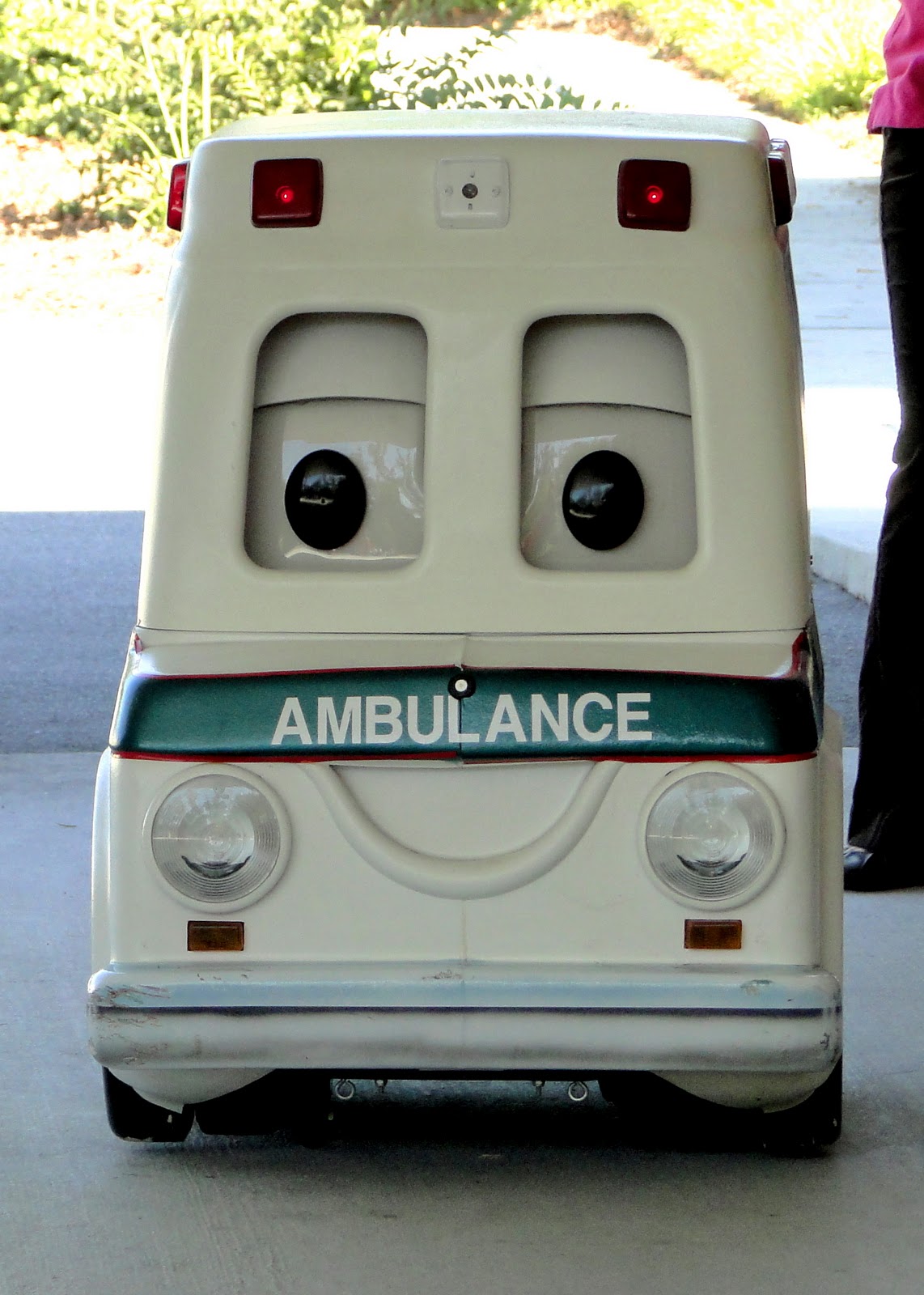 The policeman presentation was the least interesting for Kye but that makes sense if you think about it. I mean policemen just drive cars whereas ambulances and firetrucks are so much cooler 🙂 He did have his police dog with him so that was neat to see! 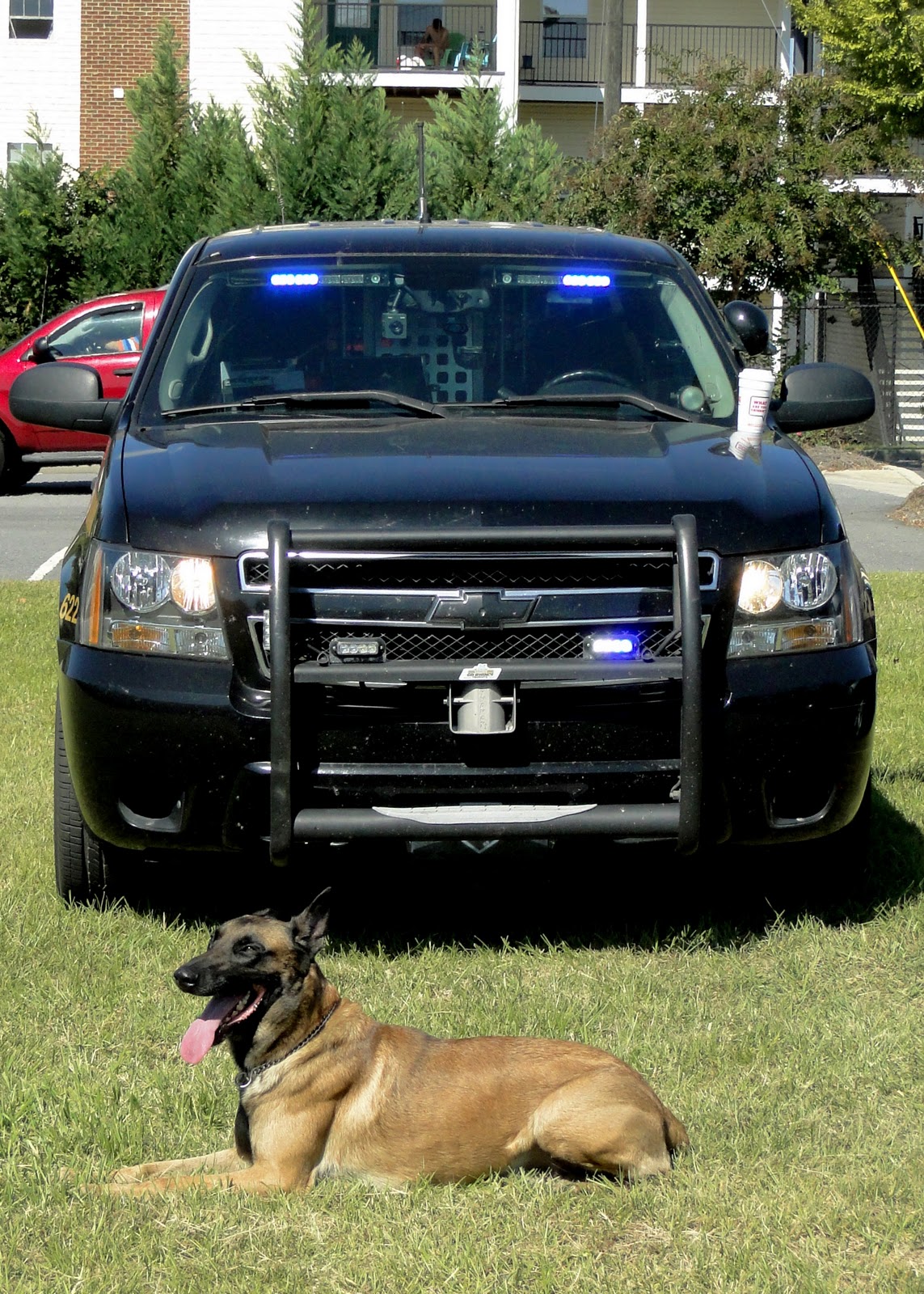 You could tell all the guys presenting aren’t used to talking to preschoolers…some of the information was way over their heads and most of the questions that were asked were impossible for them to know the answers too. I felt so bad for the policeman and totally wished I could help him out some! 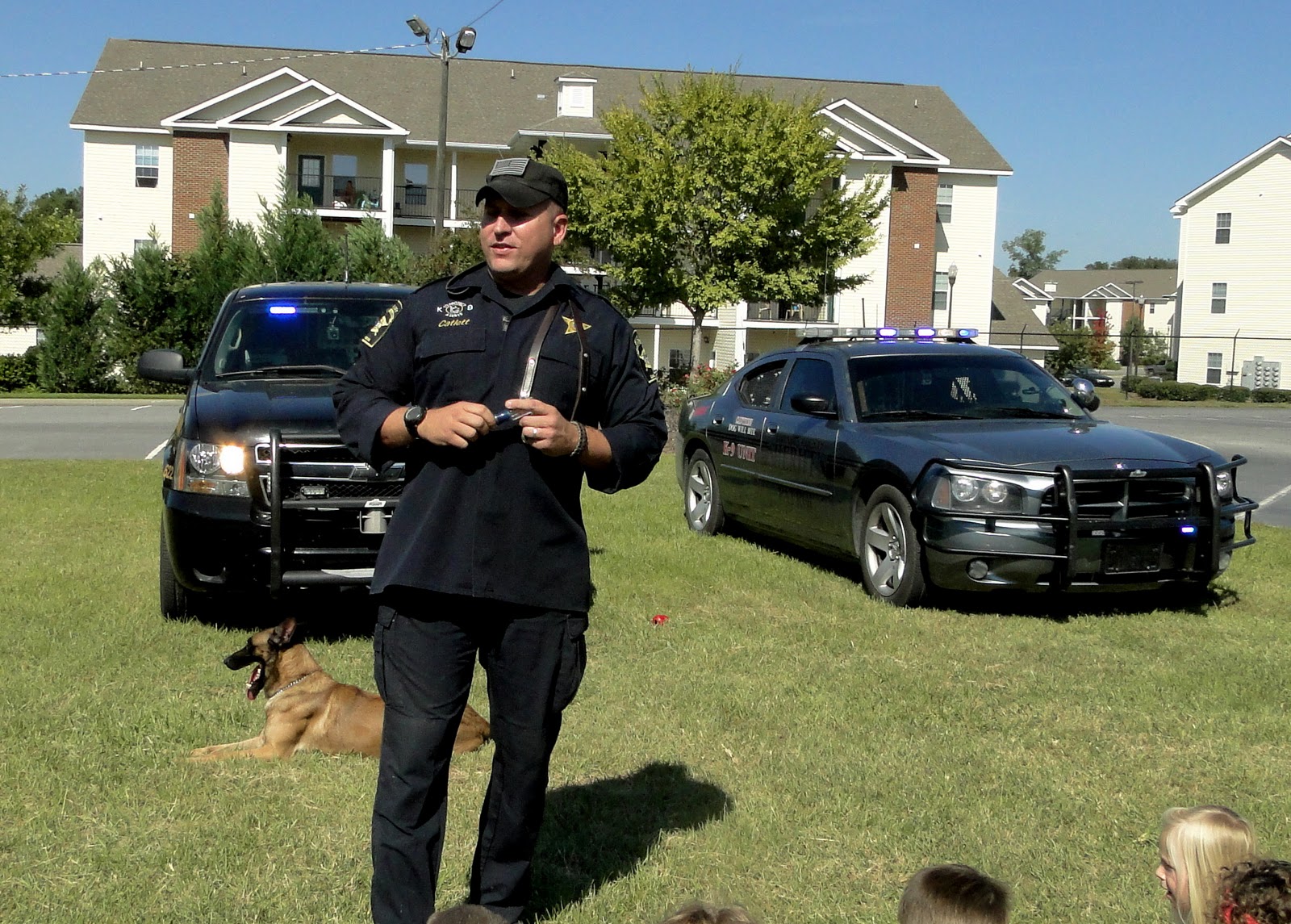 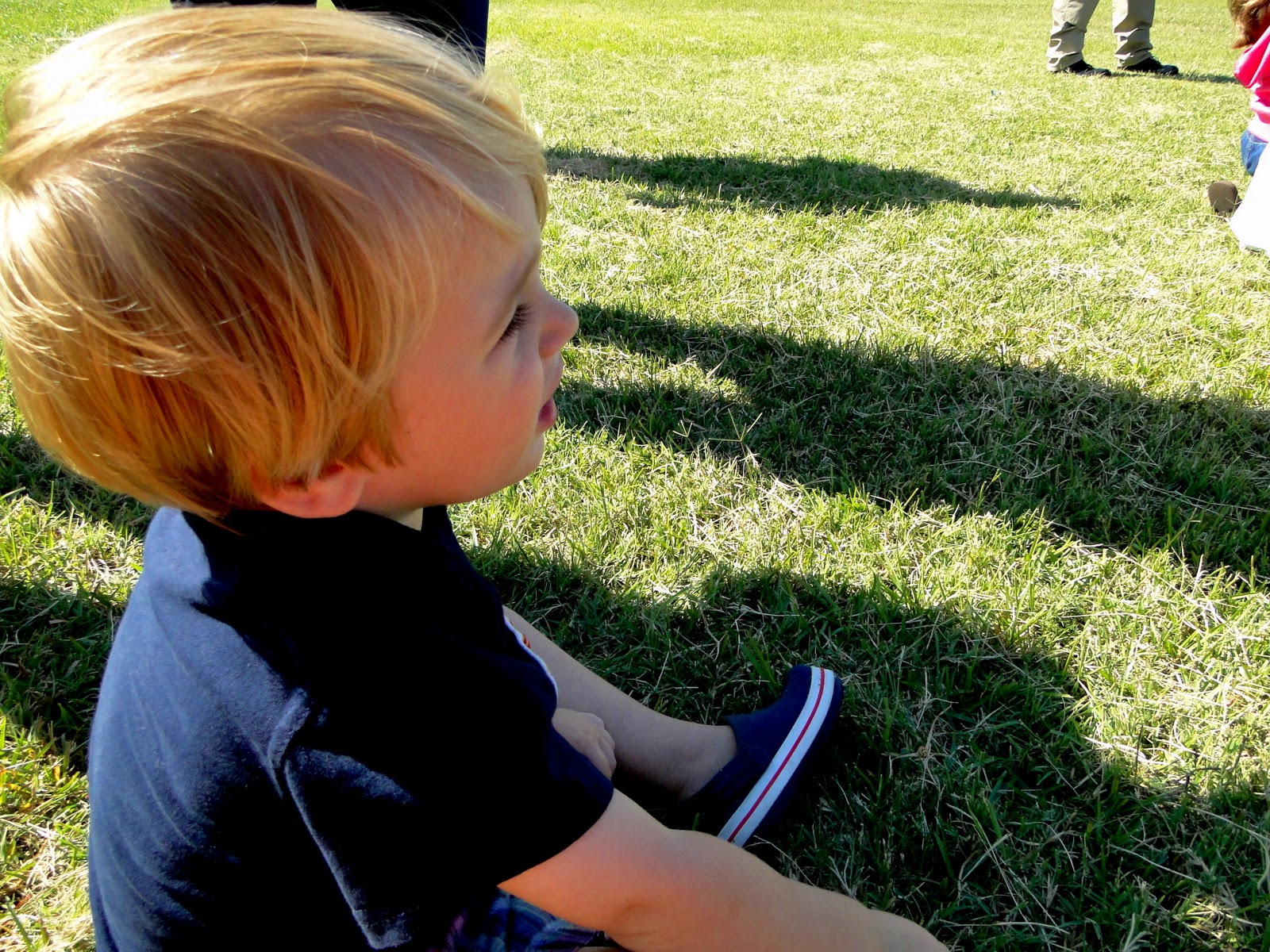 He showed us how well trained the dog is and how he can find things just be scent. I read recently that some dogs are trained to smell if a dead body had ever been there before. It’s crazy how awesome these dogs are! This particular dog is actually the policeman’s pet as well! He said the dog sleeps with his daughter every night and that it’s an added security for their home. 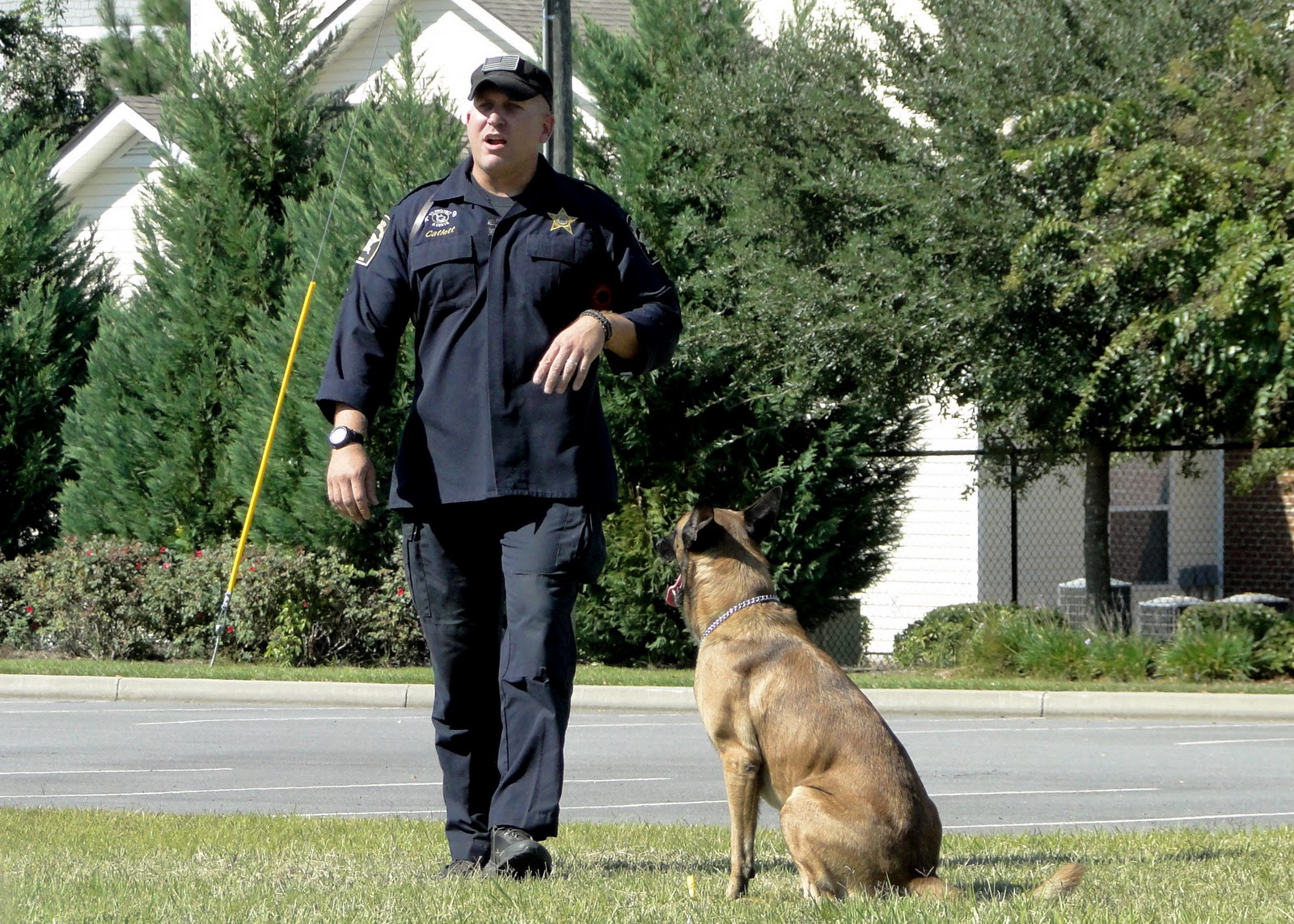 Kye really enjoyed seeing all the trucks and I’m thankful the school invited us to come!