Even only at 7 months old Brittlynn already wants to do everything her big brother does. It can be problematic when it comes to toys. On the one hand I want Kye to learn to share. He needs to share with his sister. Obviously. But on the other hand the majority of toys he plays with are too old for her. I’m a big believer in sticking to the recommended ages for toys, especially at the baby age. I am always nearby, but I don’t want to worry about my baby choking on some small piece or something ya know???

Kye LOVES Toy Story. It’s one of my personal favorite Disney movies as well so I don’t blame him. Who doesn’t like it?!?! He has pretty much every singly Toy Story toy under the sun. I think a lot of that has to do with him having a Woody themed birthday party? People tend to buy themed gifts and once they know you like something you get a TON of it!!!

When I was in the Atlanta area visiting my friend’s awhile back I hit up the Disney Store to see about getting Kye and Britt each a little prize. I like to get them a little something when Zach and I are away (and he was gone then too on a business trip). My dad traveled a lot when I was growing up and I always have fond memories of the little surprises he’d bring home with him (now as an adult I realize that 90% of them probably came from the airport as we’ve had to do that same thing on occasion haha). The Disney Store had a great deal on plush characters and I had a great idea! Kye actually has a plush version of almost all the main Toy Story characters: Woody, Buzz and Bullseye (he has two small Bullseye ones and 1 large one actually haha). He never really plays with any of them so why not let those be safe toys he can share with Britt? I thought a Jessie plush would make the perfect prize for her and would complete the plush collection of Toy Story characters 😉

Now pretty much every afternoon when Brittlynn and I go wake Kye from his nap we spend some time playing in his room and each kid enjoys their Round-Up Gang! 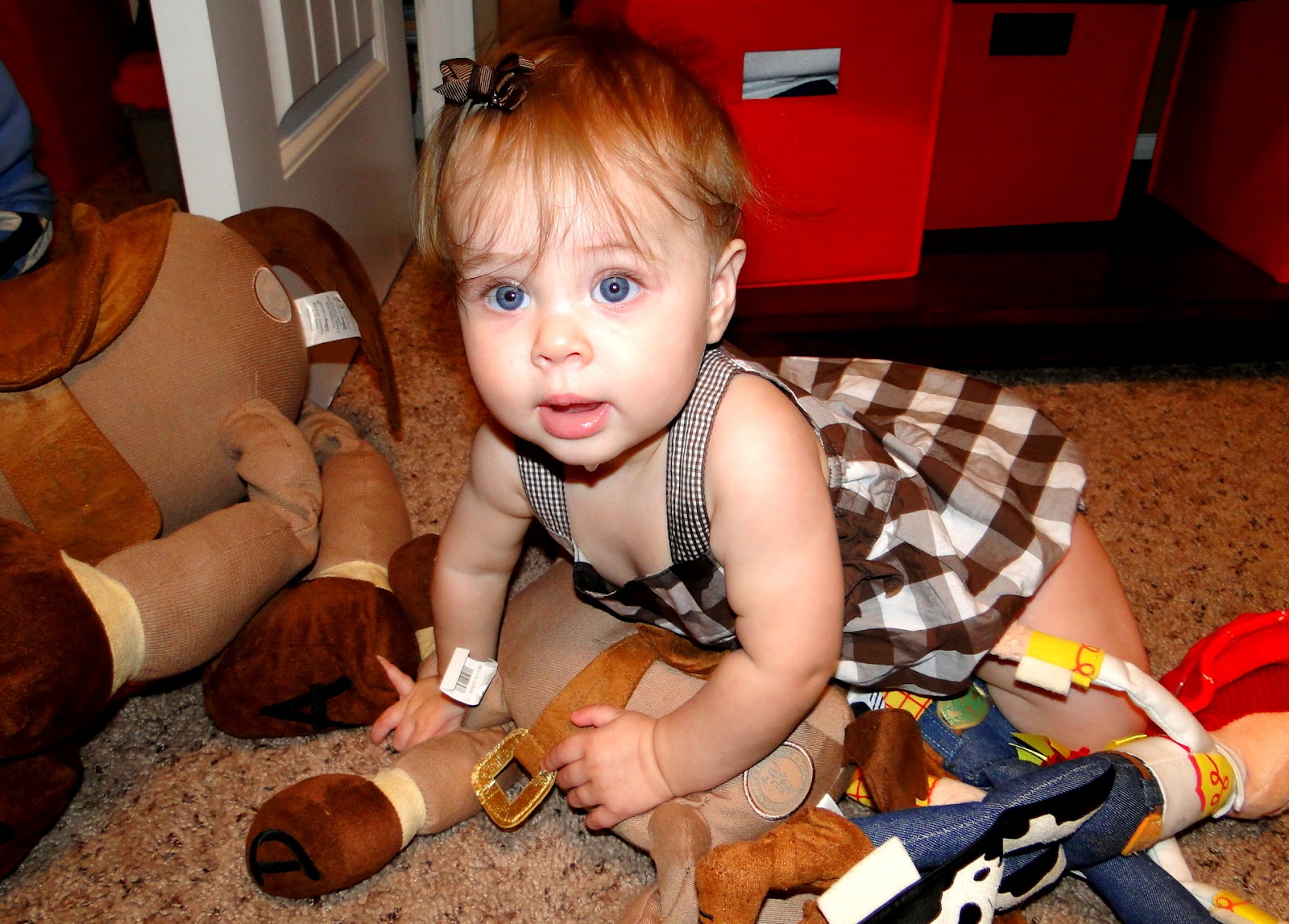 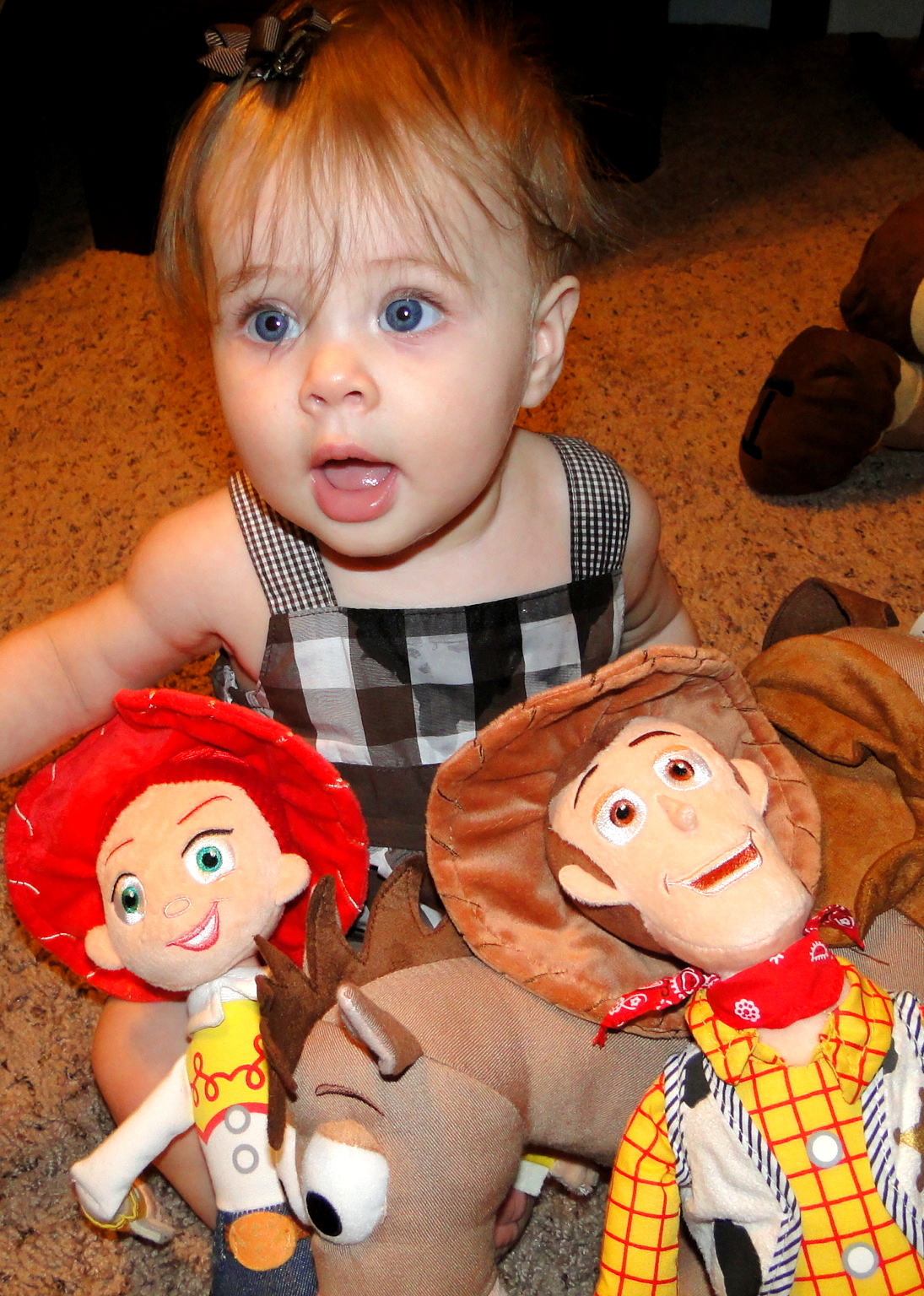 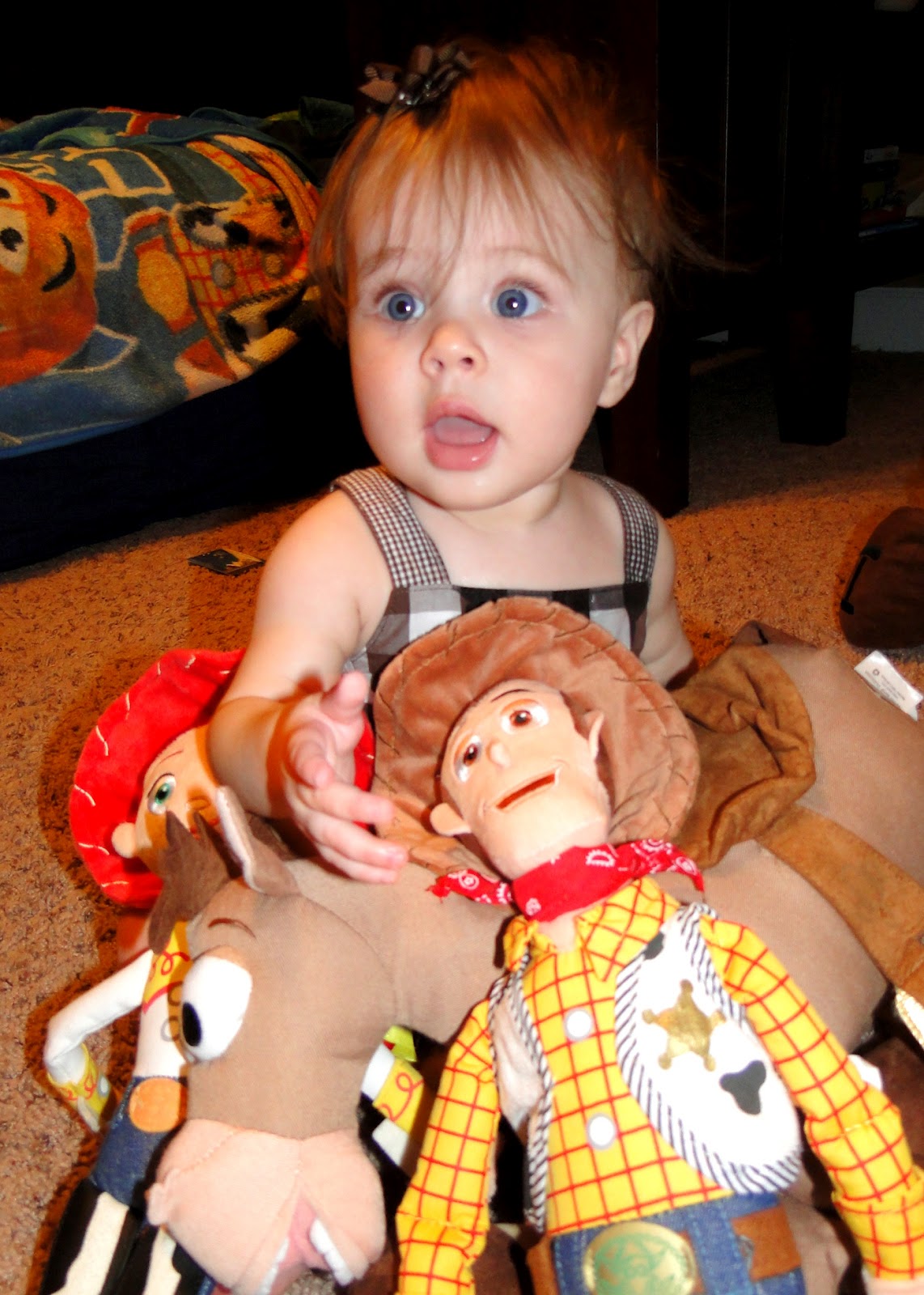 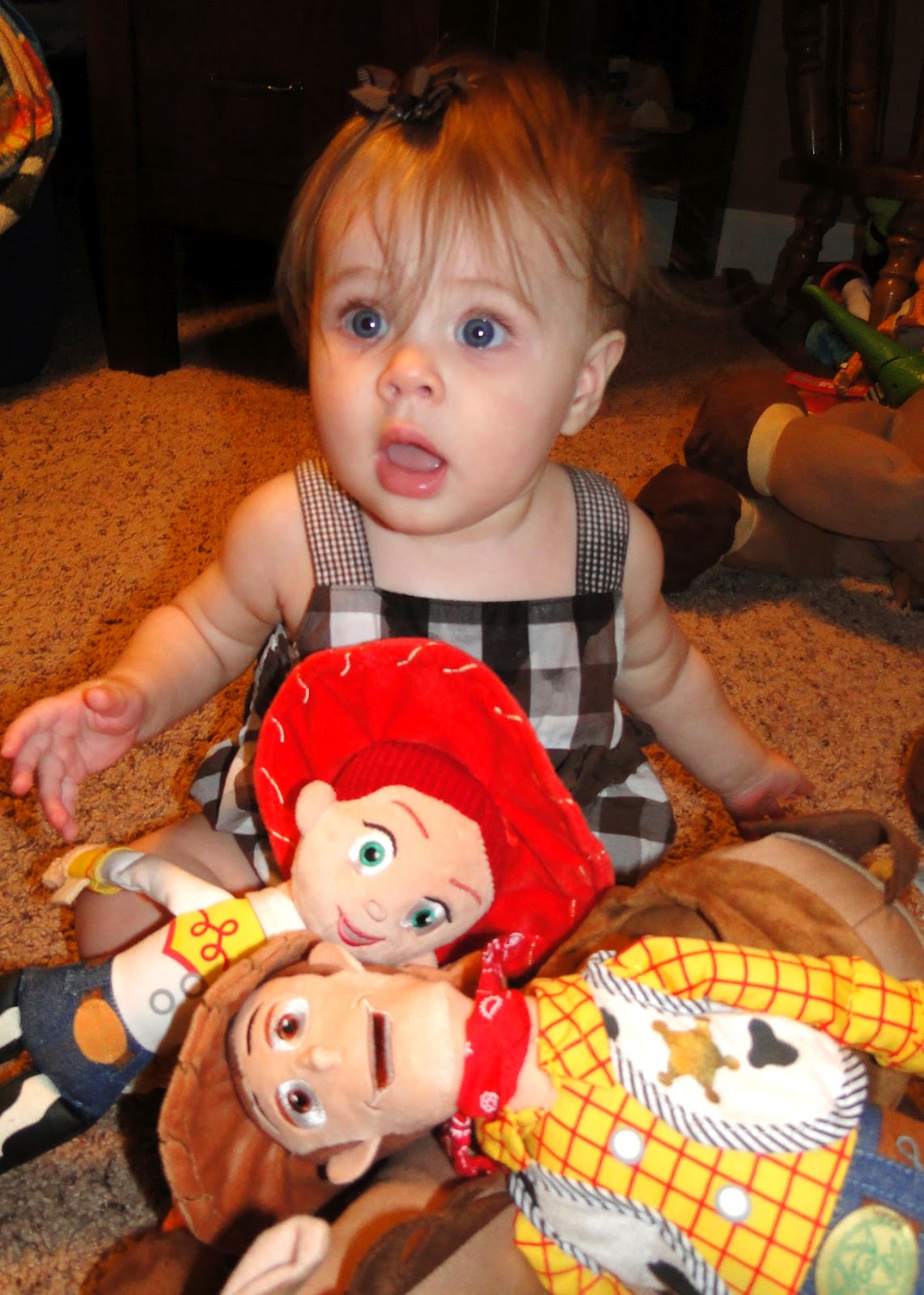 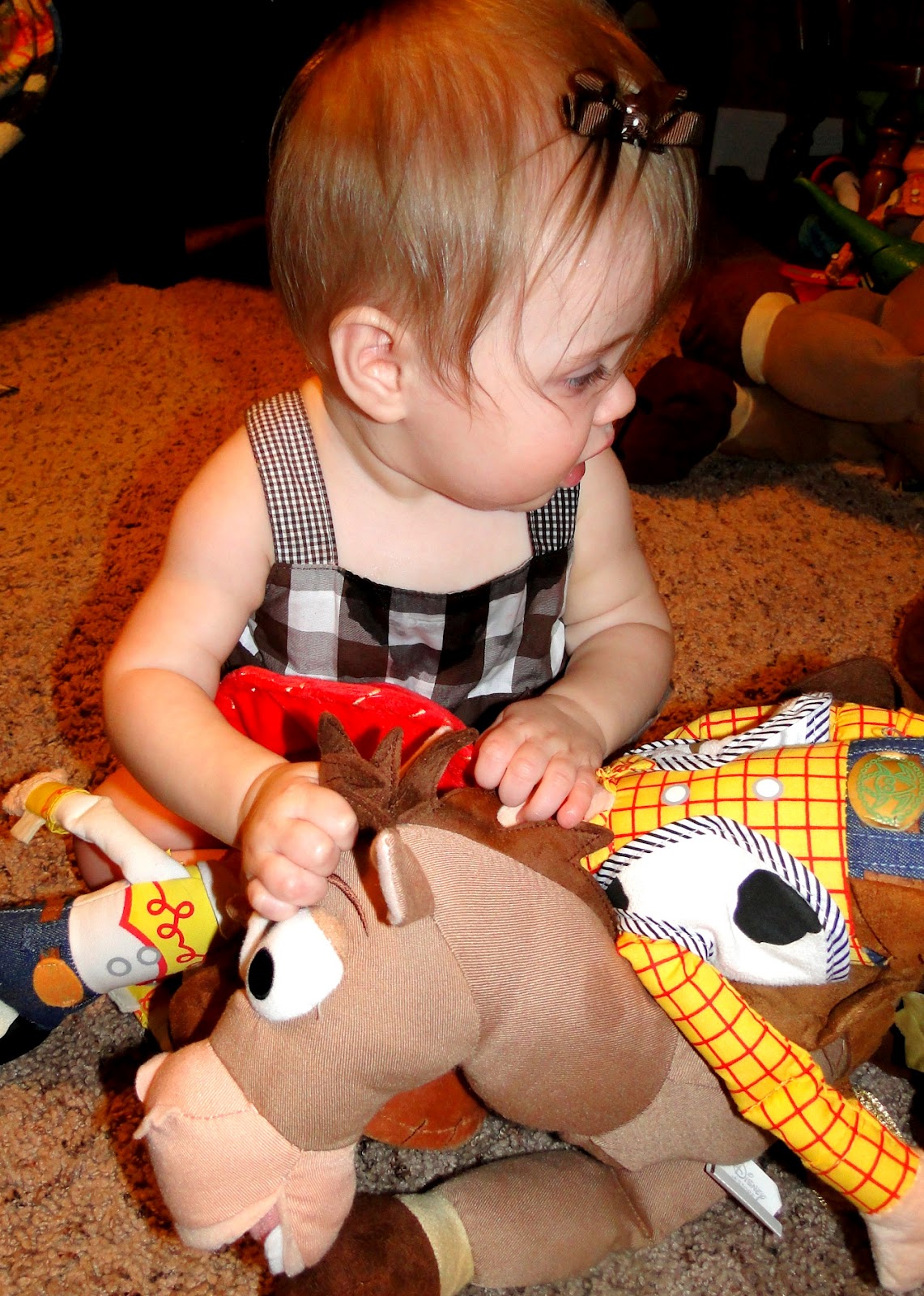 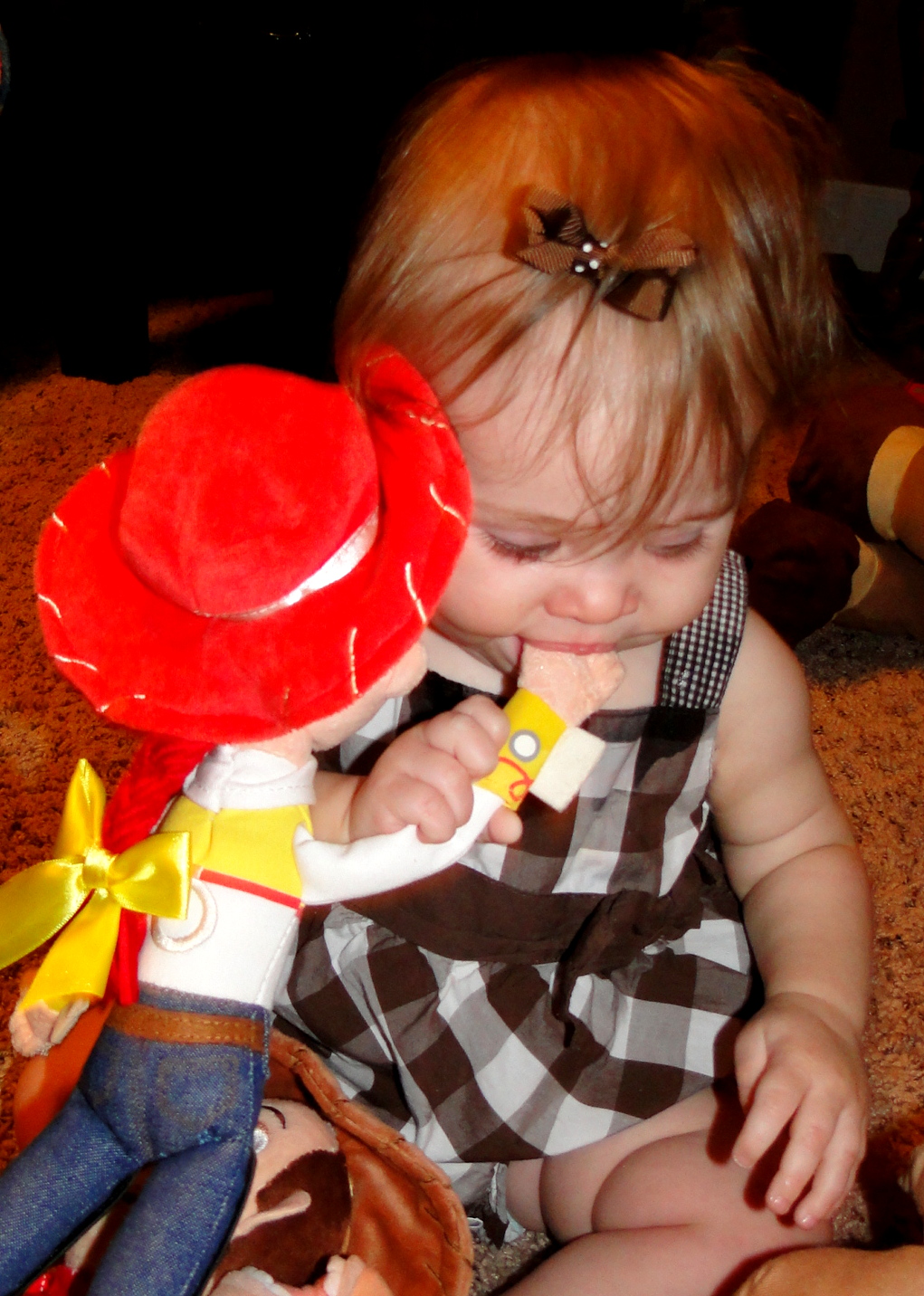 Kye often ends up with a lot more than just the Toy Story guys out! 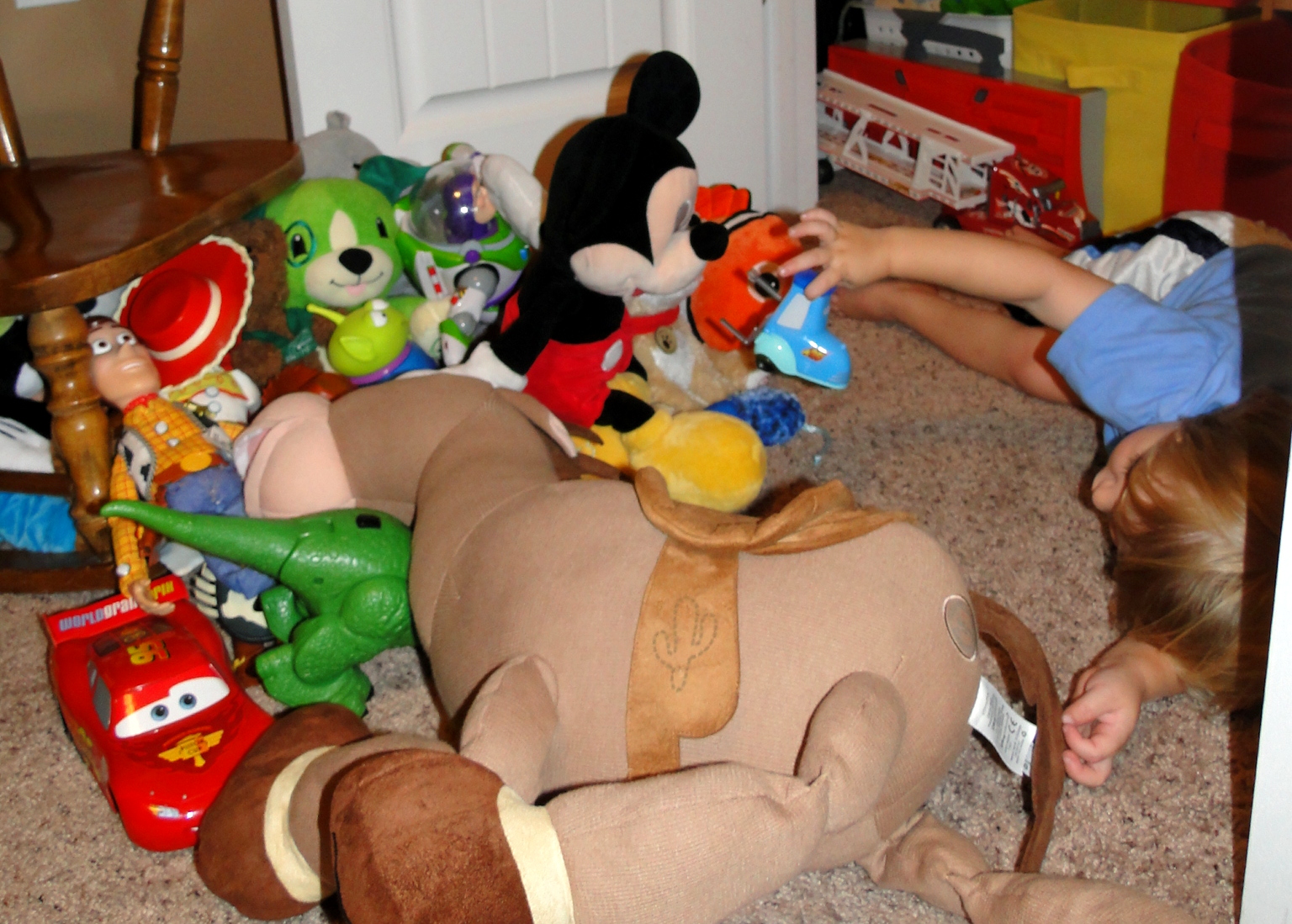 Haha not too pumped about sharing 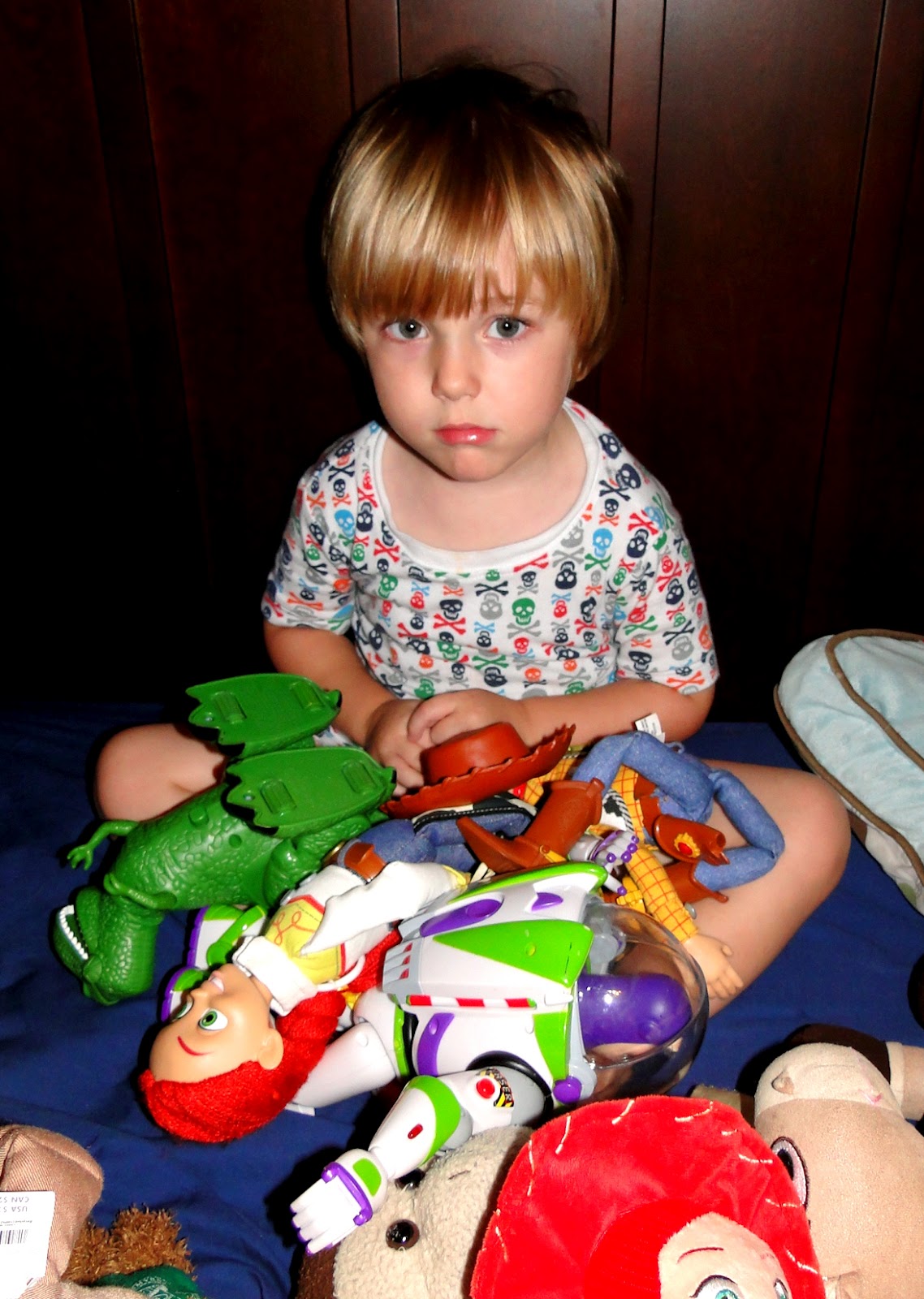 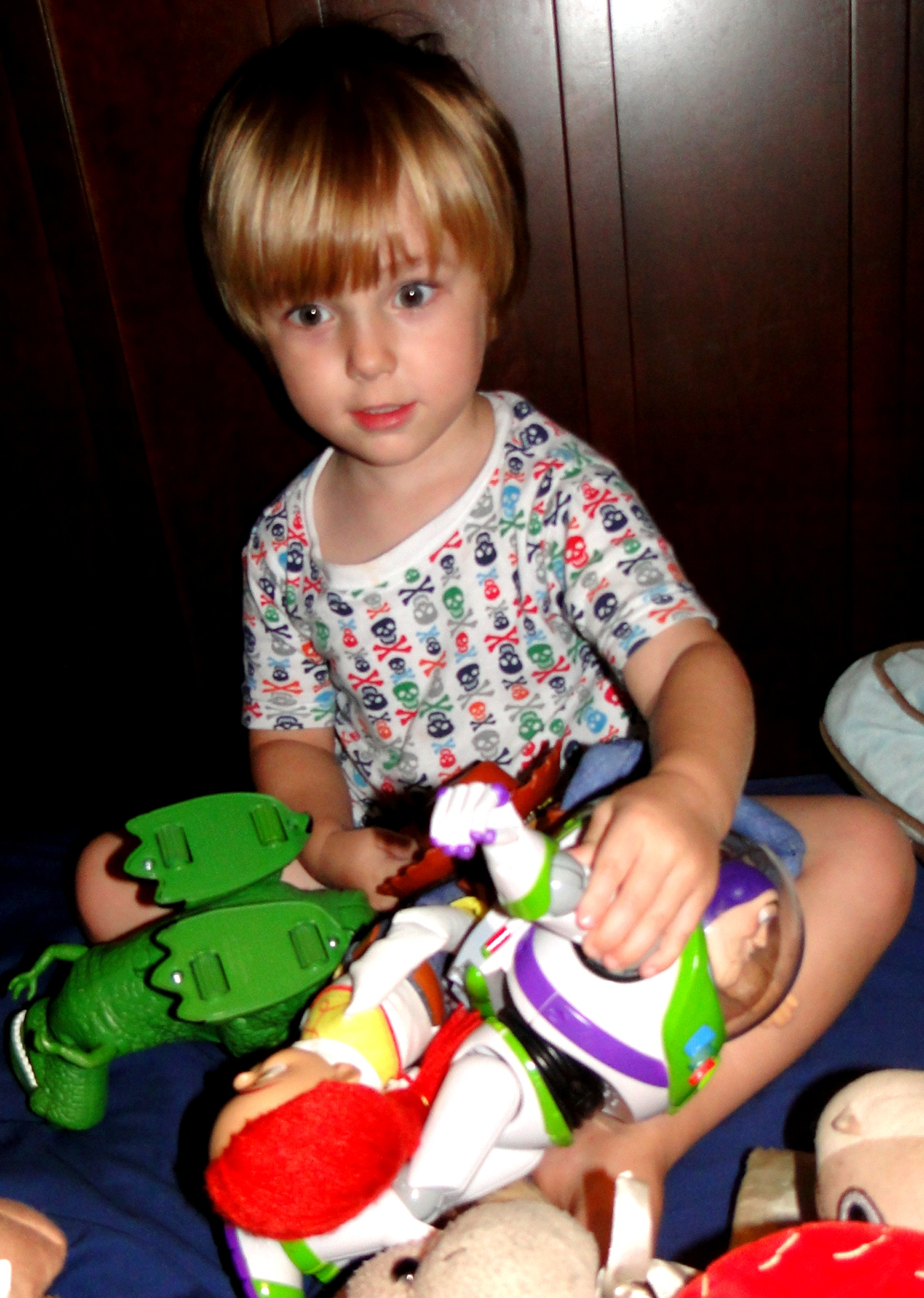 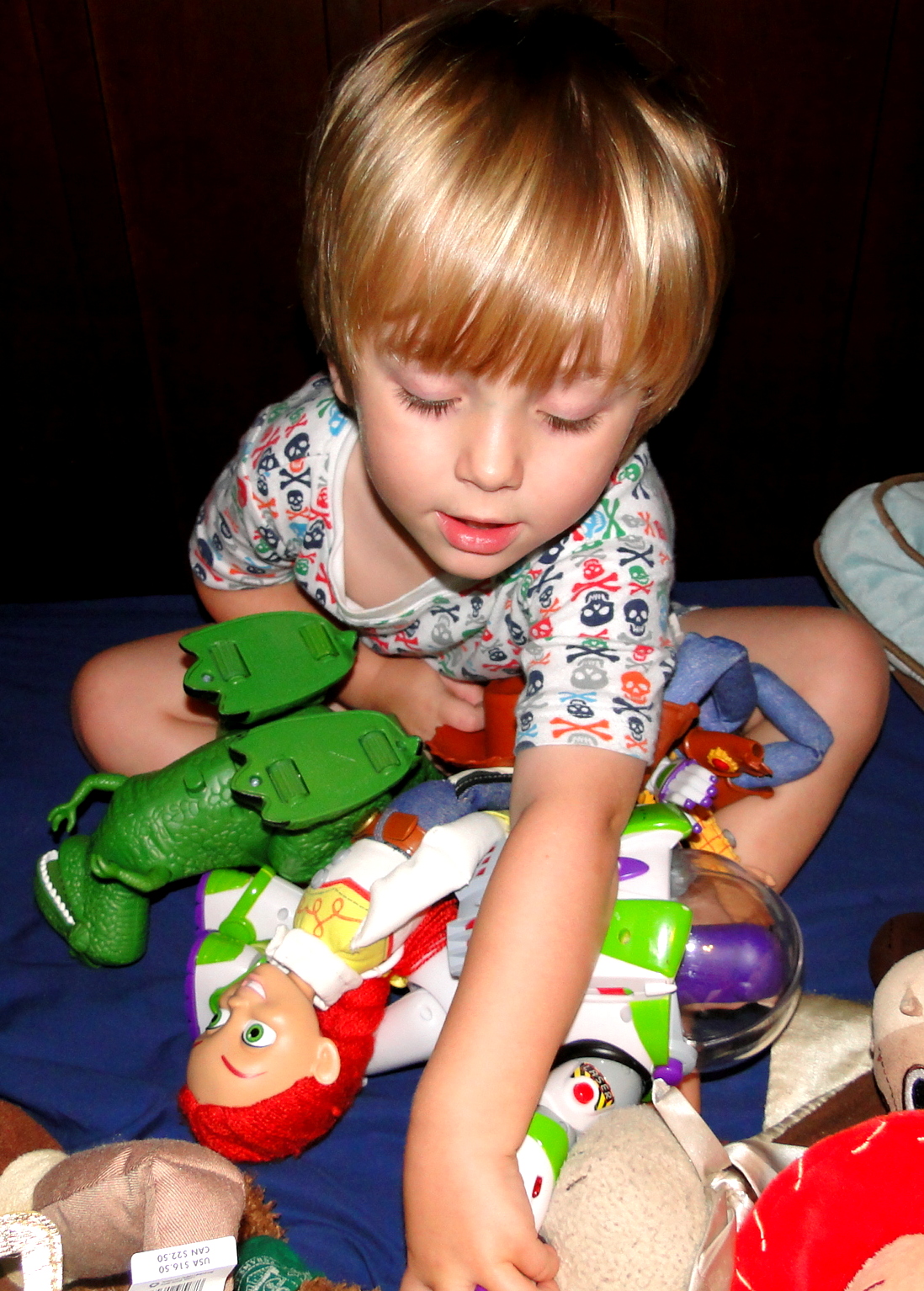 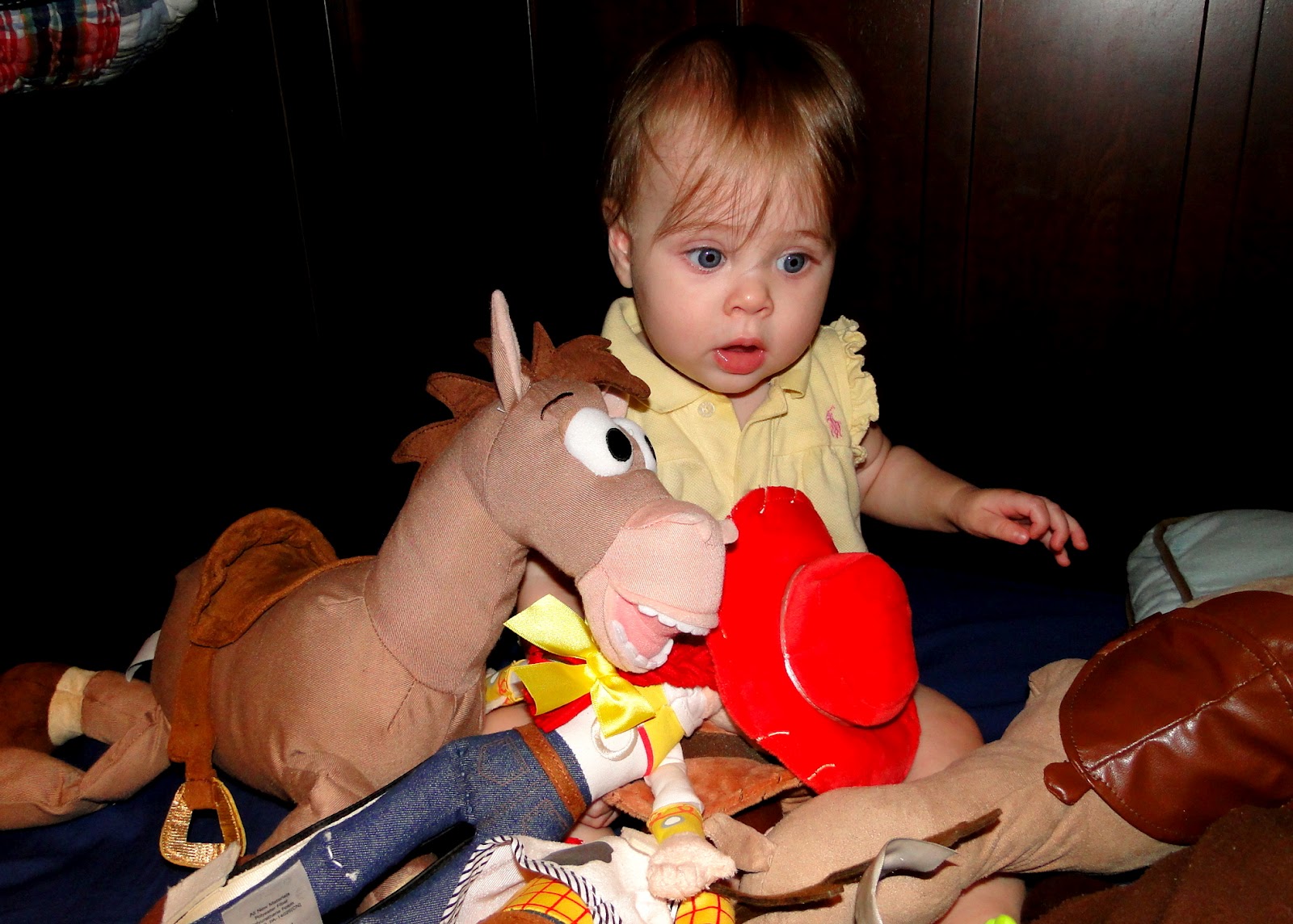 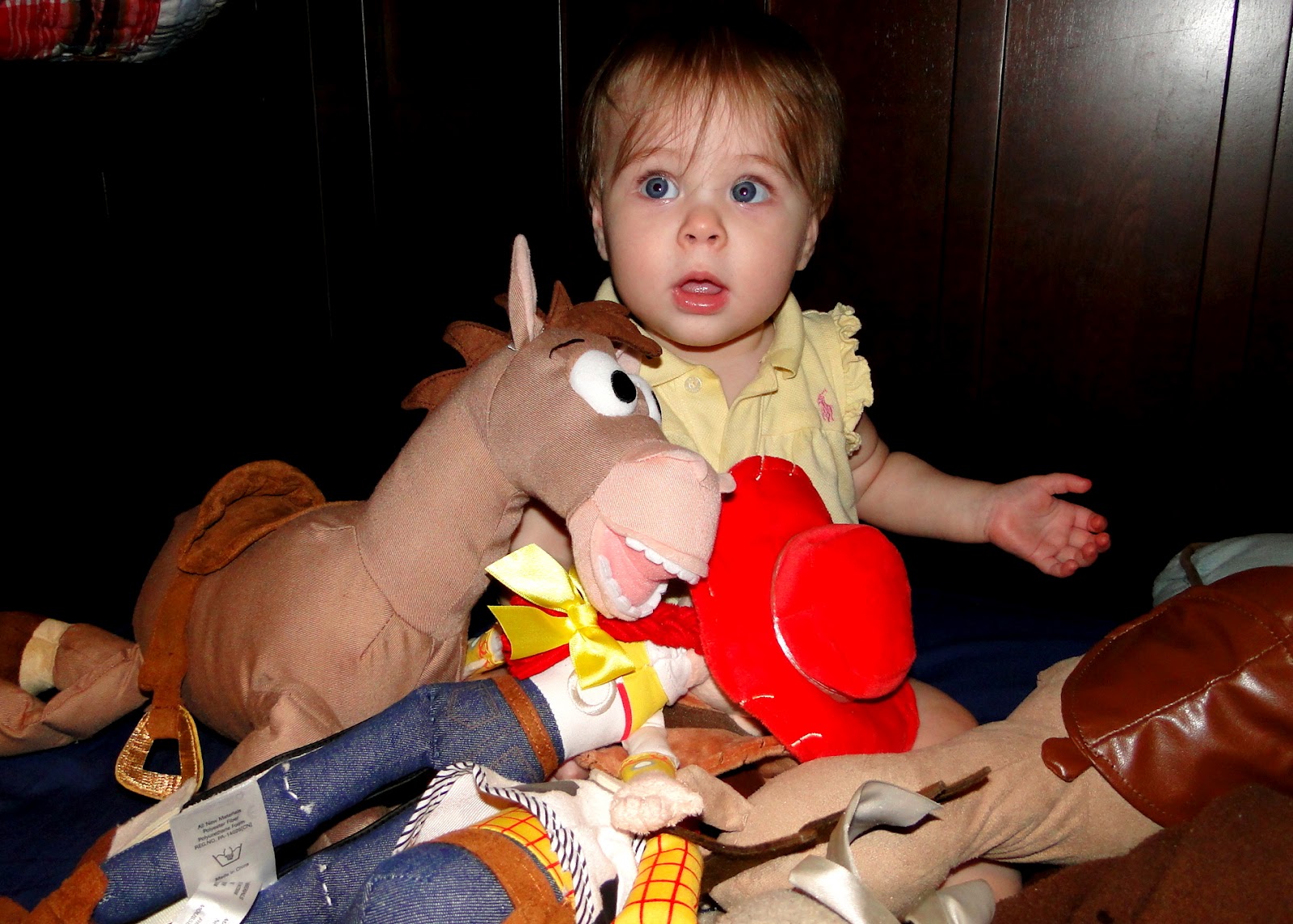 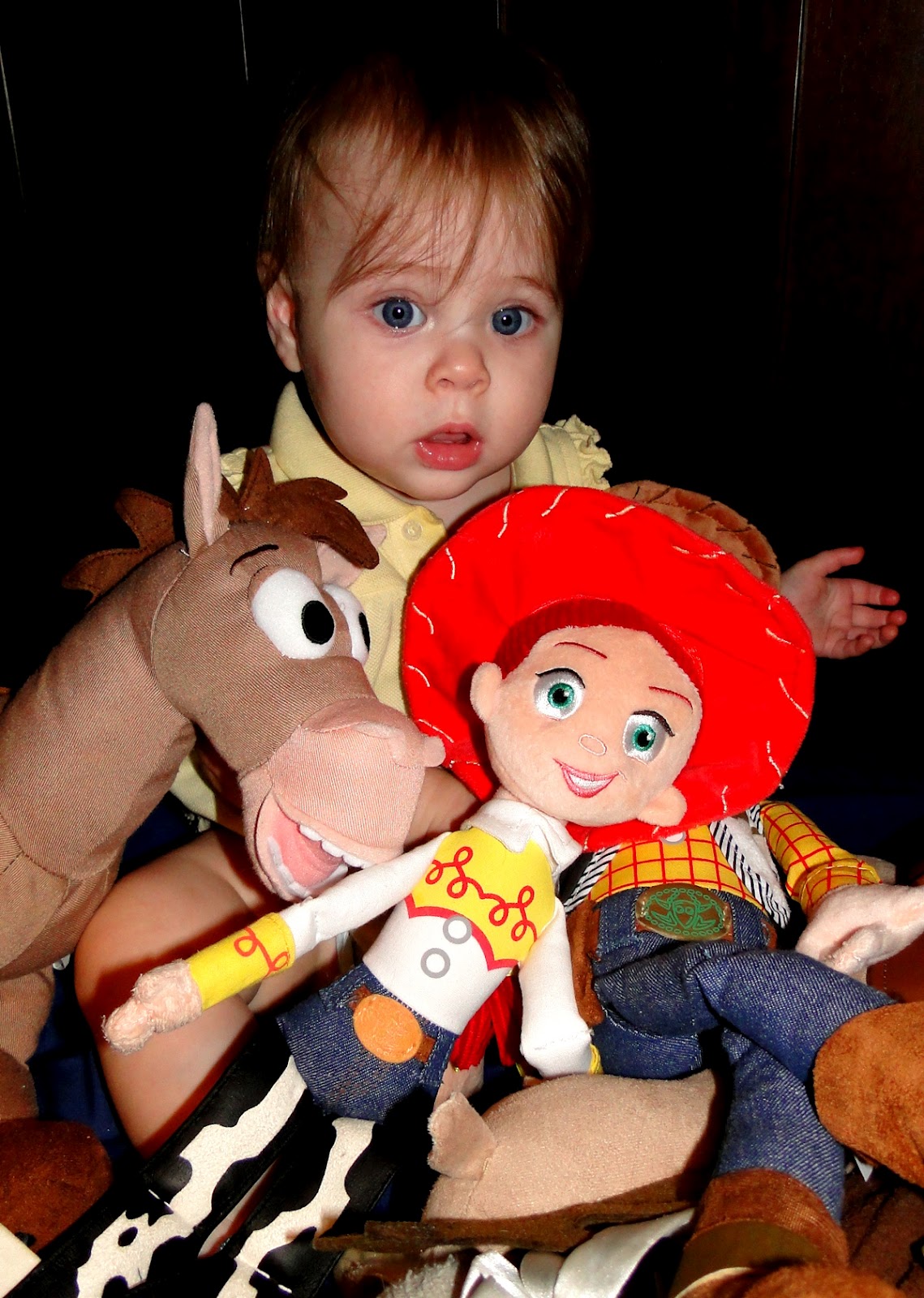 I’d love some insight on the whole sharing toys situation…how do you find a balance with that??? Kye is fine with sharing but many of his toys aren’t safe for her to use. And he often doesn’t mind sharing as long as it’s not something he wants to play with himself. I know this will only continue to be an issue as time goes on…so I am hoping to figure out how to handle it! I feel like this idea of her playing with his plush toys is a good balance for now. They are still his so he is sharing them with her (which he does great with!) but they are also safe for her age as well.