Zach and I haven’t had a date night since our mini-Christmas celebration, the weekend before Brittlynn was born. Over two months ago. Granted, we had a baby. I mean, that’s a valid excuse to let things slip a little right? No matter how many babies we add to our bunch, our marriage will ALWAYS come first. I’m so, so thankful I married a man who values marriage and who truly desires to see my happy.

We planned a date night the Thursday after Valentine’s Day (Feb 16th). It was a Valentine’s/Post-Baby date. I did NONE of the planning. It was 100% Zach. He planned everything we would be doing that night, arranged childcare, and even picked out what he wanted me to wear. Of course, the three dresses he picked out ended up not being what I actually wore (one was wayyyy too tight still, one was wayyy to big, and the other required a strapless bra which would be pretty uncomfortable seeing as I’d be missing a feeding and need to pump once we got home), but I LOVED the gesture. It was so sweet!

Everything about the evening was a surprise. I nursed Brittlynn at 5:00 and Zach ran Kye over to Mom’s where he spent the night.Then Mrs. Charlotte came over while I was nursing Britt and Zach went over with her everything she needed to do to take care of her at our house while we were on the date. Mr. Rusty also came over. It worked out well because Mr. Rusty has hardly seen Britt at all so it gave him a chance to love on her some! As soon as she finished nursing, I threw on my outfit and we went out the door.

When I walked into the garage only my car was in there and it was already started. Zach lead me around to the passenger side and told me to sit in the back! As I climbed in I saw Trey (Zach’s cousin who lives with Mr. Rusty and Mrs. Charlotte) in the driver’s seat!!! I cracked up! He was all dressed up so handsome and Zach had asked him to be our chauffeur for the evening. Zach had looked into renting a limo but the cost was crazy high so he asked Trey instead! It was so sweet and thoughtful and really it wa a great thing for Trey too. He got to see how he should treat a woman 🙂 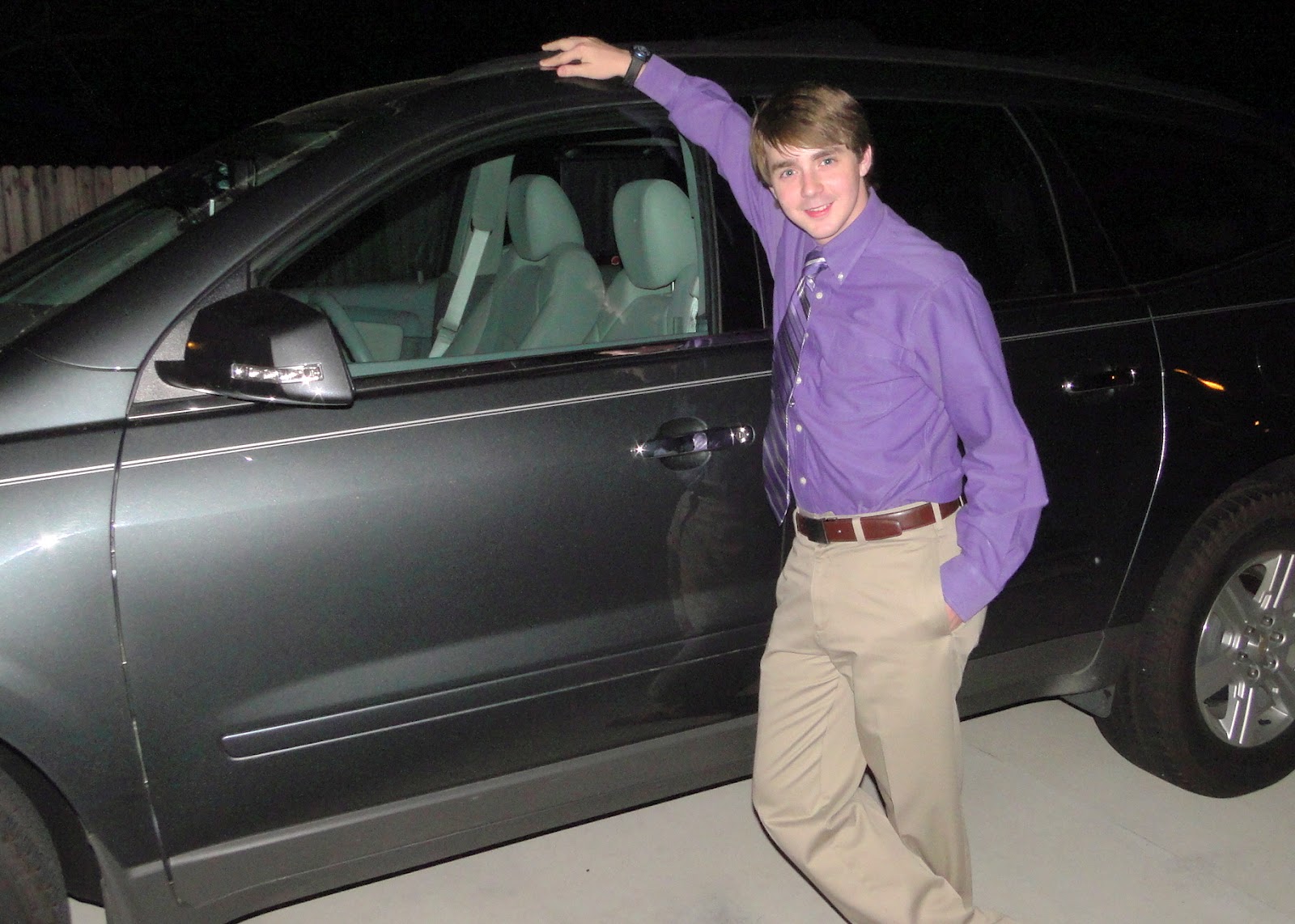 In the backseat waiting for me was a basket filled with goodies. Zach had gotten me all my favorite movie candy so I could pick which ones I wanted to take to the movie theater with us. We had a gift card for the movies from Mrs. Charlotte as our Valentine’s Day present (which we FORGOT to use haha we ALWAYS do that!!!) and a Bistro gift card from Katie as our Christmas present. So he put both of those in the basket as well. He also got out our wine glasses (Yes, we own wine glasses! They were in our honeymoon suite the night of our wedding from the hotel staff along with a bottle of sparkling cider) and a bottle of sparkling grape juice. He even bought strawberries and put them in the glasses. 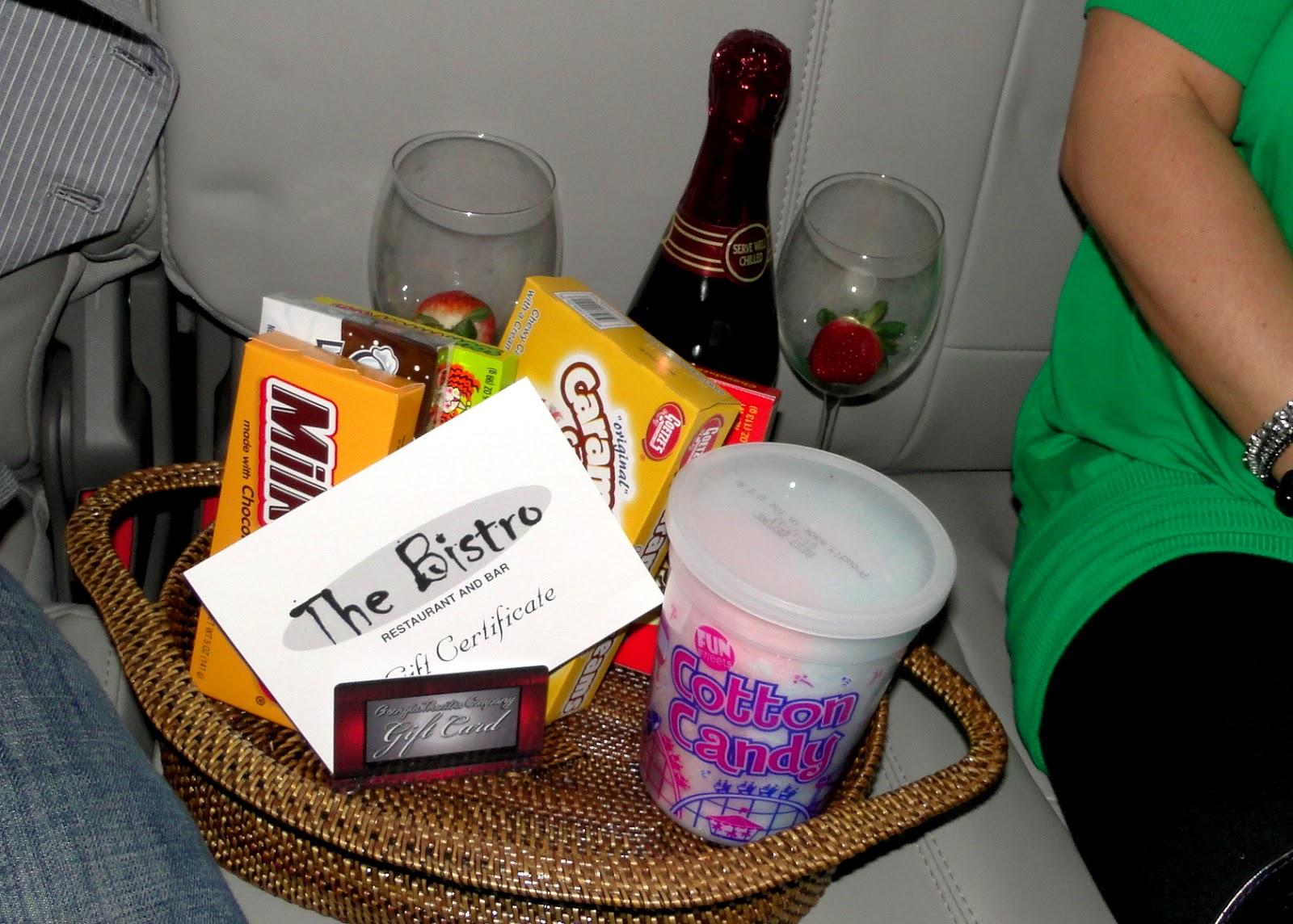 On top of that, he even bought me flowers!!! 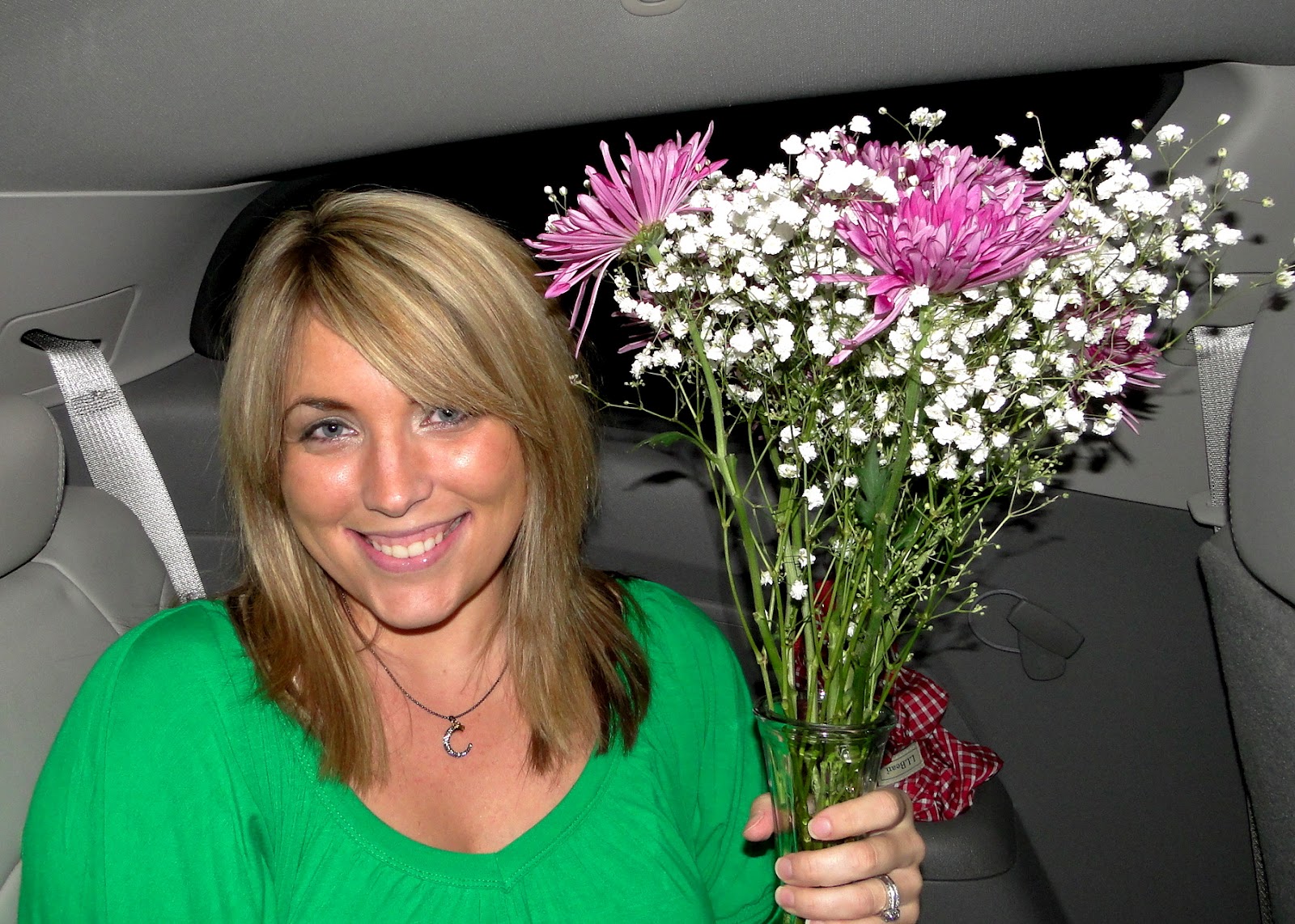 Zach knows my goal every year is to see every Oscar nominated movie (for the record, I’ve never actually achieved this goal…) so he wanted to take me to see The Descendants. It only played at one time that day – 6:40. He really wanted to do dinner first so he asked the theater if he could rent it out. Isn’t he so sweet? It’s totally the thought that counts because they told him in order to rent it he’d have to buy out every seat so it’d cost around $1200! Haha. Not worth it! We enjoyed our “limo” ride to the movie theater while sippin’ on our fancy drinks. 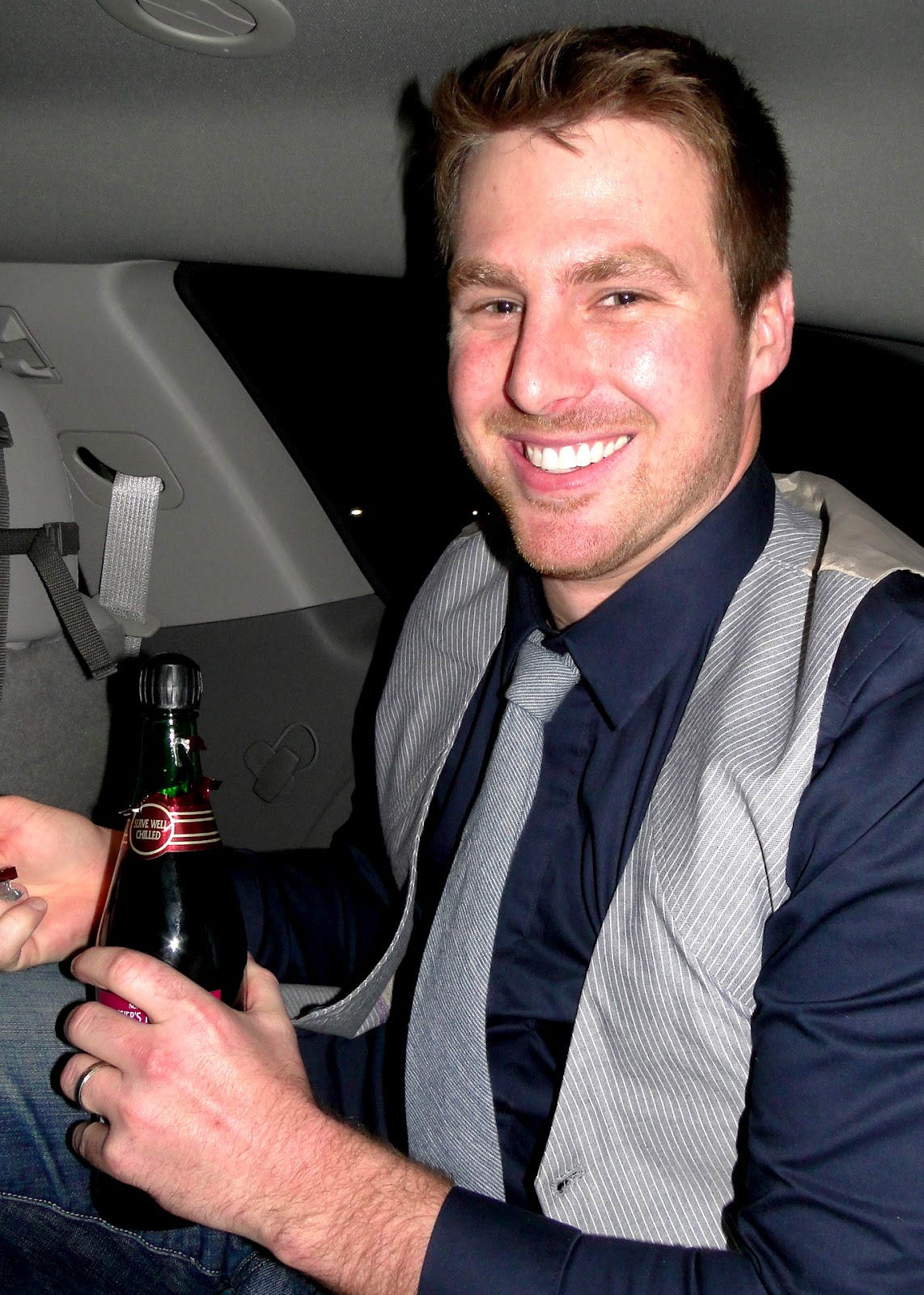 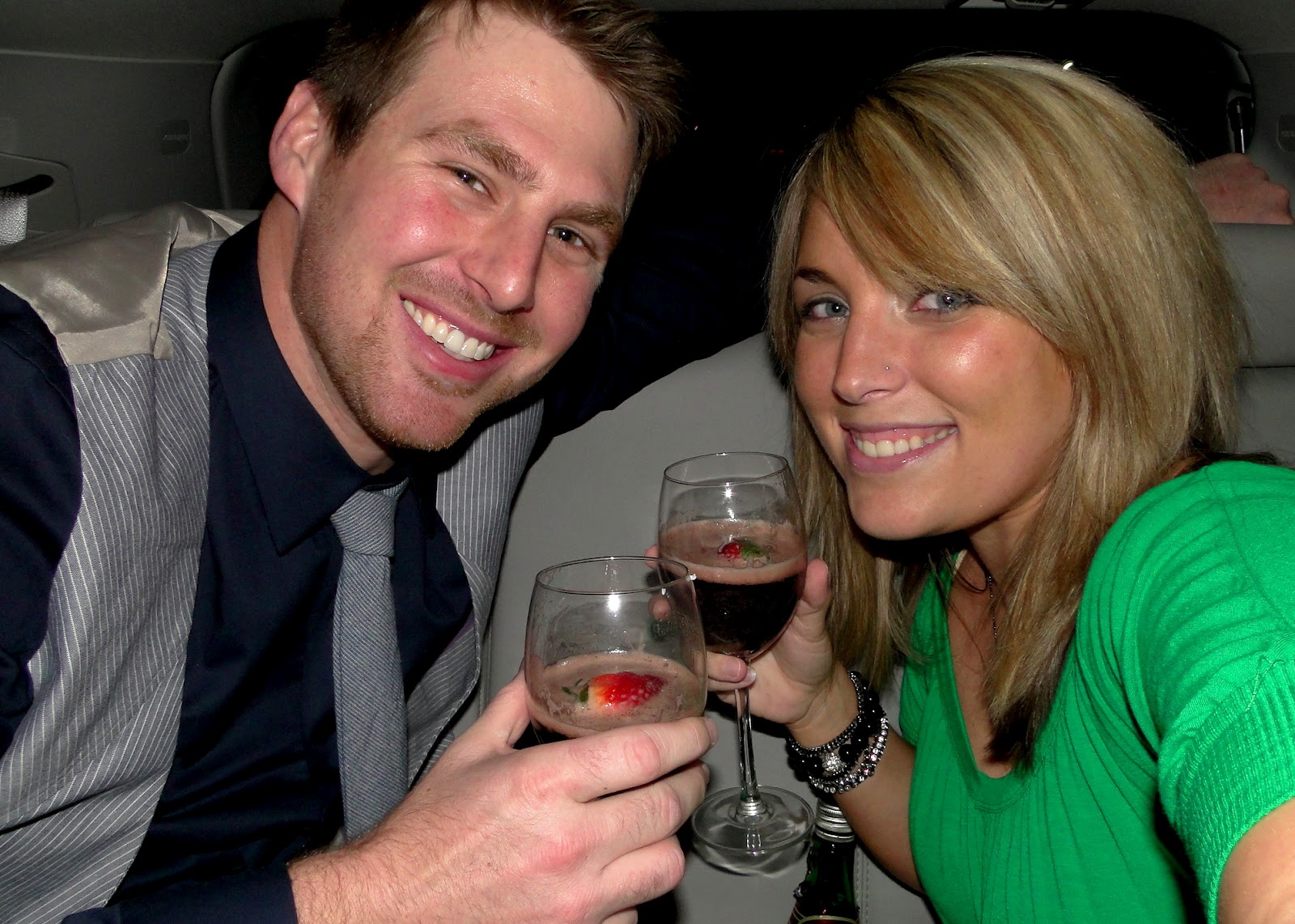 We were the youngest people seeing that movie by about 30 years or so. But, like I told Zach, when I’m old I’ll totally live at the movie theater. I love movies. We enjoyed the movie…and I did a good job holding back some ugly, ugly tears. It wasn’t the most up-beat movie that’s for sure. I ended up having a good cry over it the next day in the shower haha. I LOVED it though (I love movies that are about real life and real life issues…Zach gets pretty bored by them…).

While we saw The Descendants, Zach paid for Trey to see the movie of his choice that started around the same time. One of his buddies ended up seeing it with him so it worked out perfectly. Our movie got out about 10 minutes before theirs so we walked around the theater checking out all the upcoming movies (HUNGER GAMES!!!). We ran into a huge group of the youth from our church and I was so proud that Zach wasn’t the least bit embarrassed to tell them that we were waiting on our “driver.”

Next up Trey took us over the The Bistro for dinner. While we ate, Trey took our credit card and he and his friend ran and got themselves dinner. Then when he came back to get us, we paid the bill. Again, great planning on Zach’s part! We both didn’t eat much during the day so we’d have PLENTY of room for our meals! 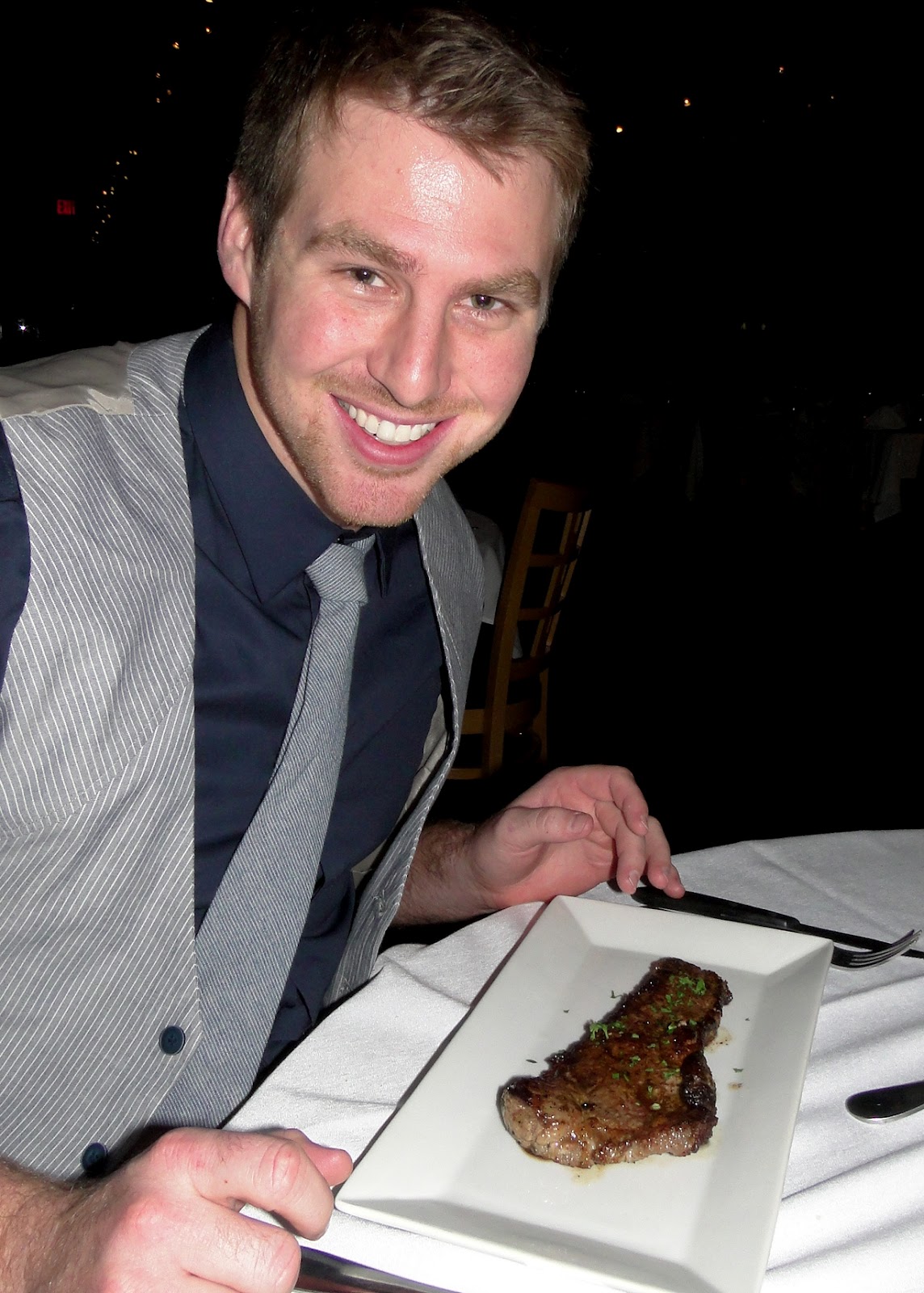 The chicken in a lemon sauce I got was AWESOME! 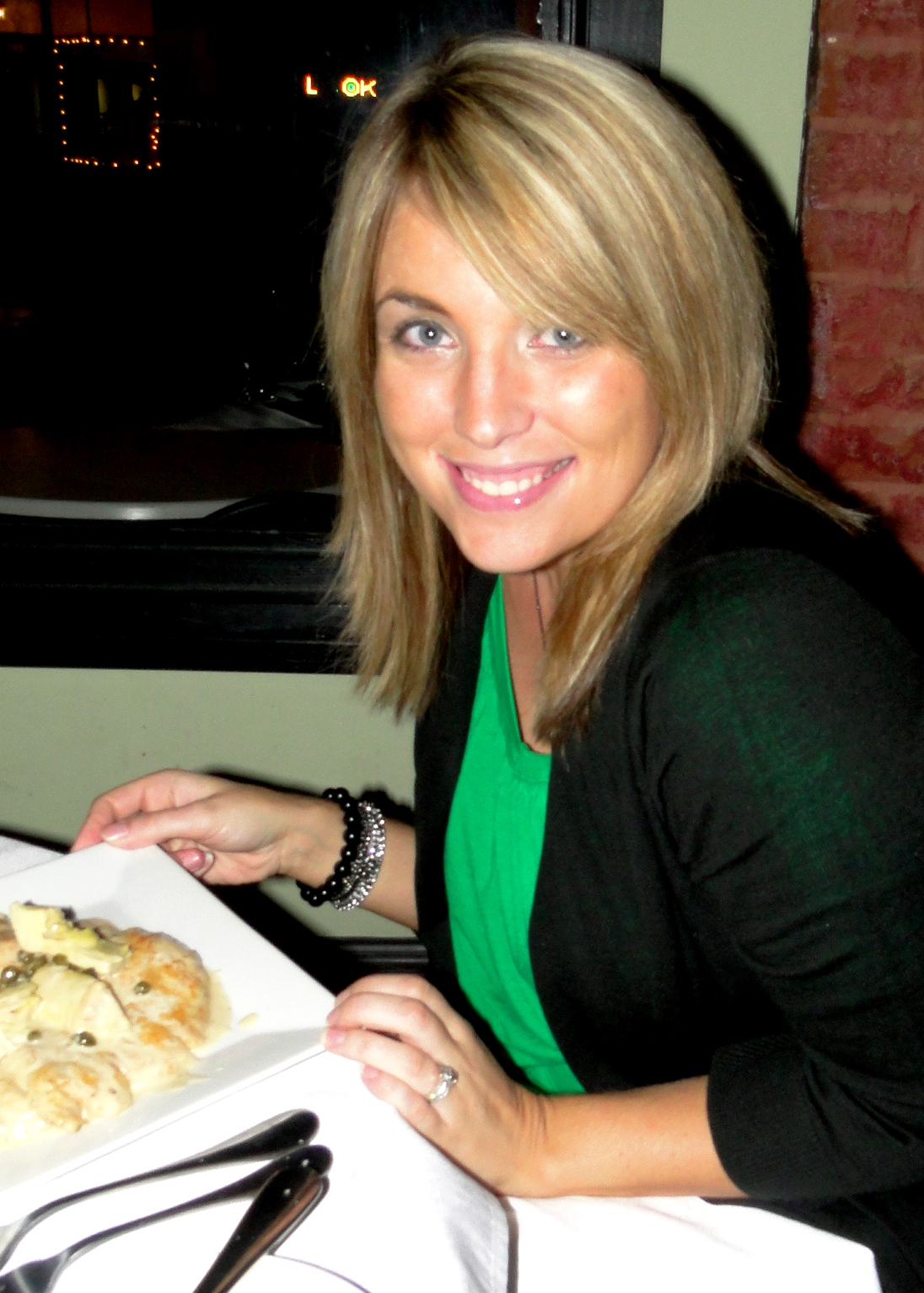 Once we got settled back in the car to head home Zach pulled out another surprise. He had hooked up our car refrigerator (sounds random that we own this but it’s awesome for travel!) and had chocolate and strawberries waiting for us for dessert. He doesn’t even like strawberries…so I ate almost all of them myself haha. 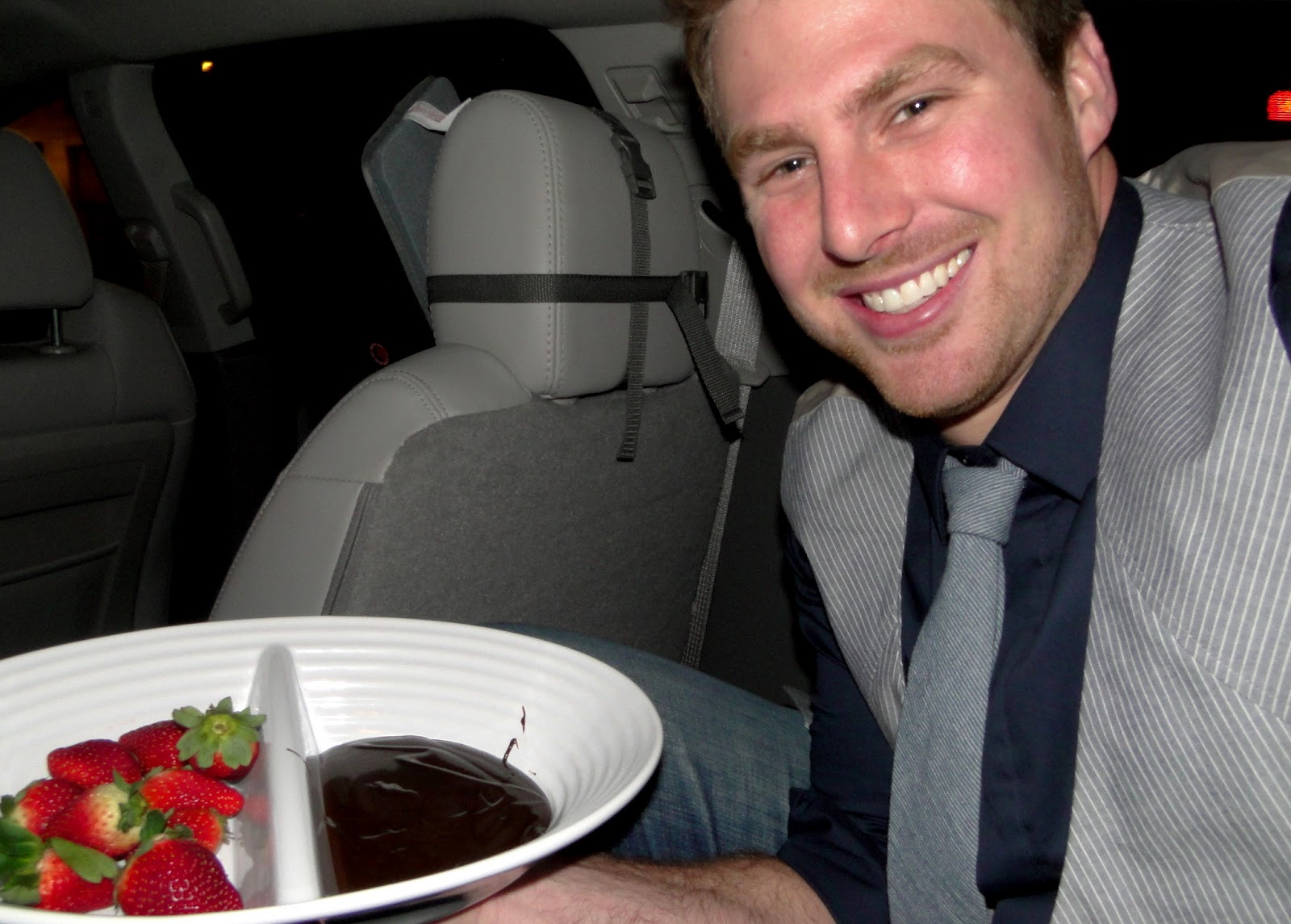 By the time we got home I was BEYOND stuffed! 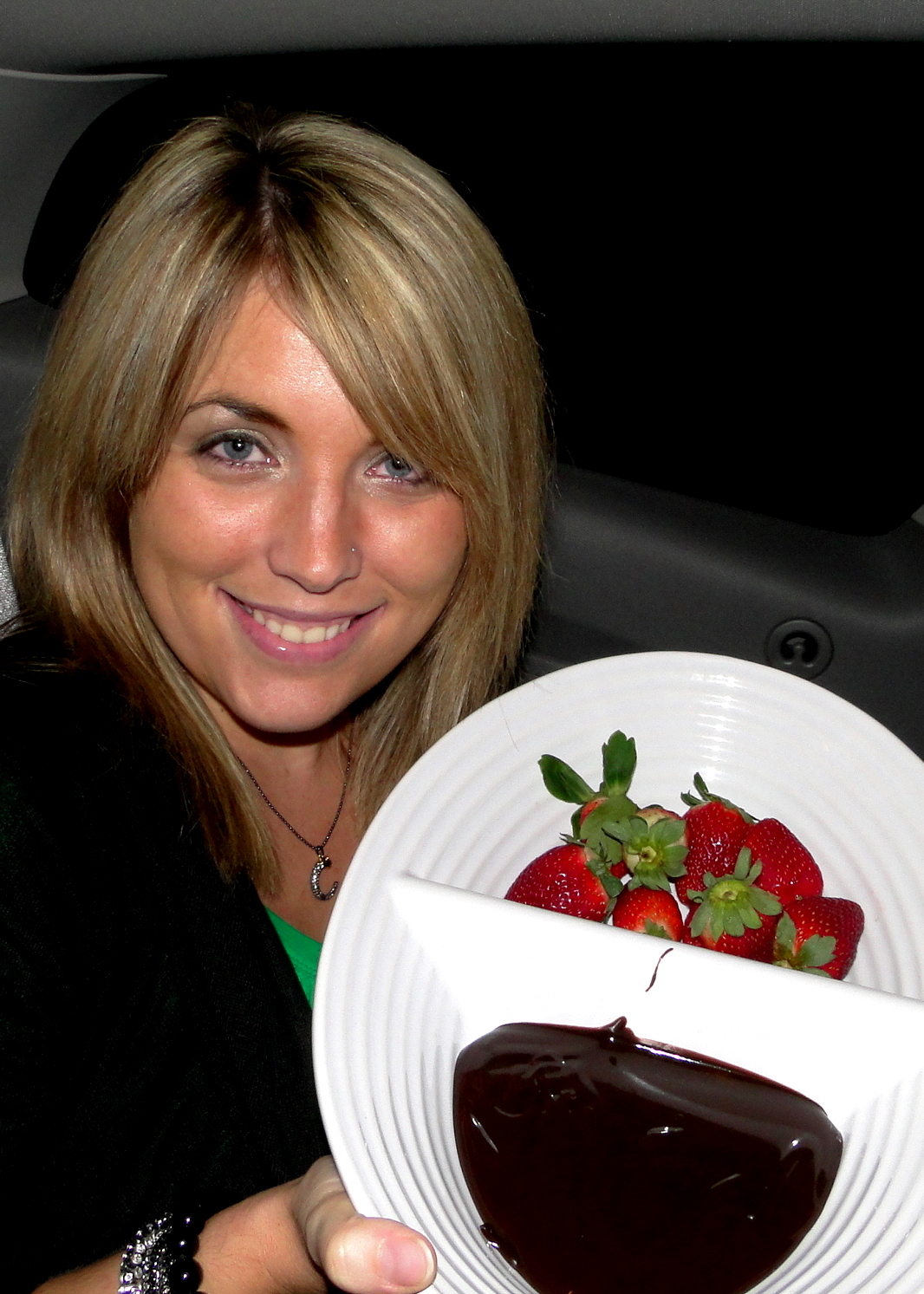 Brittlynn had done wonderfully for Mrs. Charlotte and it was nice that she got to babysit her. It was Britt’s first time with a legit sitter so I’m glad she did well! We had SUCH a wonderful night. I felt so pampered and loved. To me, the best part wasn’t the movie or the dinner…it was all the thought Zach put into each and every detail. And, even more so, it was that he was proud to be doing all of those things for me. Most men will be romantic with their wives but would be mortified if other guys knew about it. Zach’s dad knew all the things Zach had planned and Zach wasn’t embarrassed a bit! 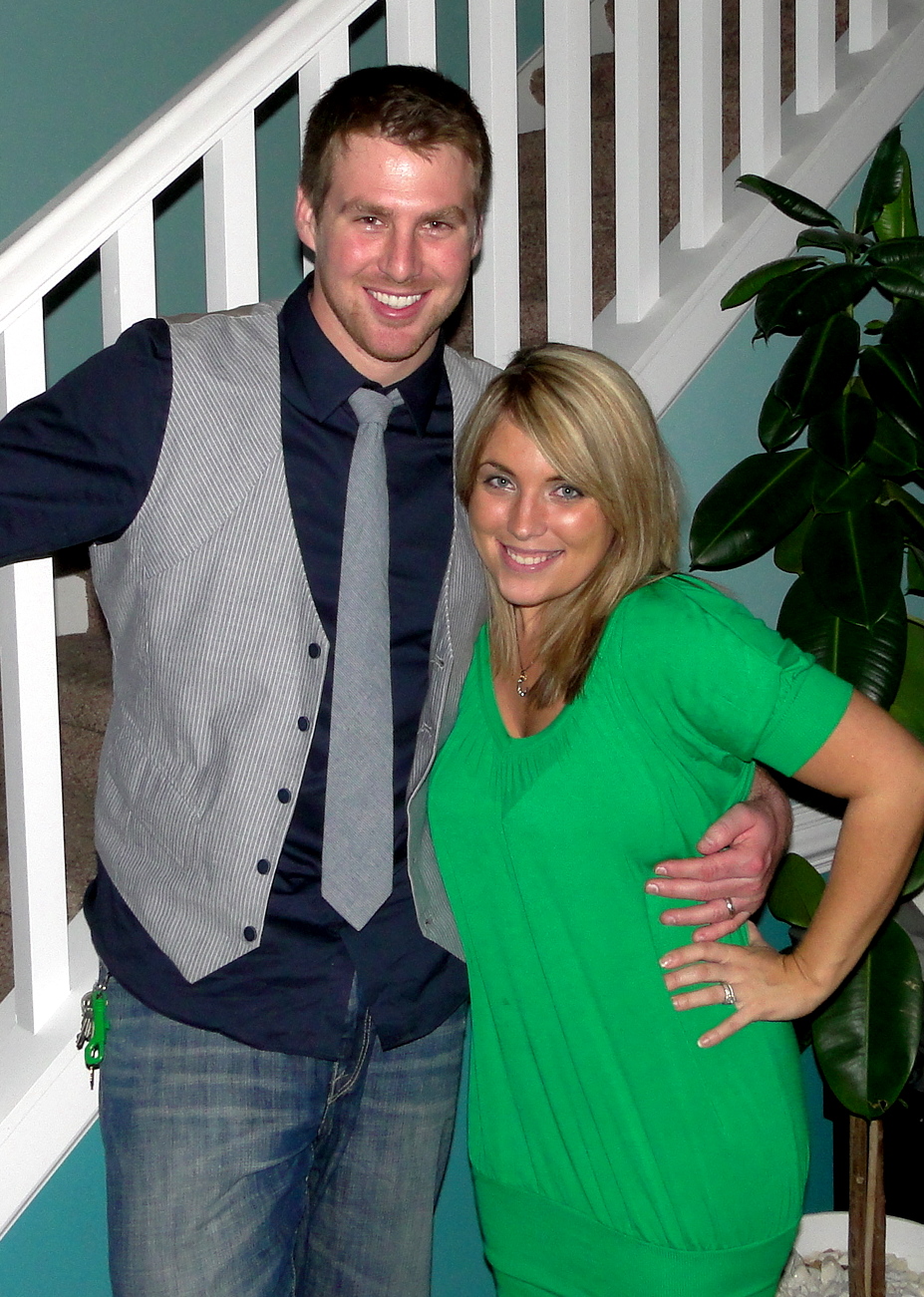 I truly am so blessed to be married to Zach. I always had a list in my mind of what the perfect husband would be and he surpasses all expectations I’ve ever had. He’s so amazing that I often wonder why in the world he loves me or how I got so dang lucky!!! I cannot express to him enough how much that date night meant to me or how thankful I am to have him and call him mine 🙂