Crissy is one of my best friends so when I found out she was pregnant with Olive I, of course, wanted to celebrate the new baby with a shower!!! Ashley was sweet enough to get with me about hosting a baby shower for Olive and I’m thankful she did…since I have a new baby myself hosting an event is pretty tough. Being that this is Crissy’s forth pregnancy in four years we opted for something low-key and simple. Really, what does Crissy not already have for a baby??? Especially a girl??? All she needed were diapers and wipes. We brain stormed and thought a Girl’s Night Out would be SUPER fun! Being at the end of pregnancy is tough and it’s impossible to have a Girl’s Night with a newborn (especially when you nurse) so this would be one big last event for Crissy before she’s cooped up in the house for awhile. If you know Crissy, then you know she’s a social butterfly and can’t stand to be stuck inside!

For decorations Ashley and I each made a diaper cake

I found this ADORABLE Valentine’s Day themed book (Crissy’s originally due date was V-day) with the main character being named Olive. I know, I’m awesome 😉 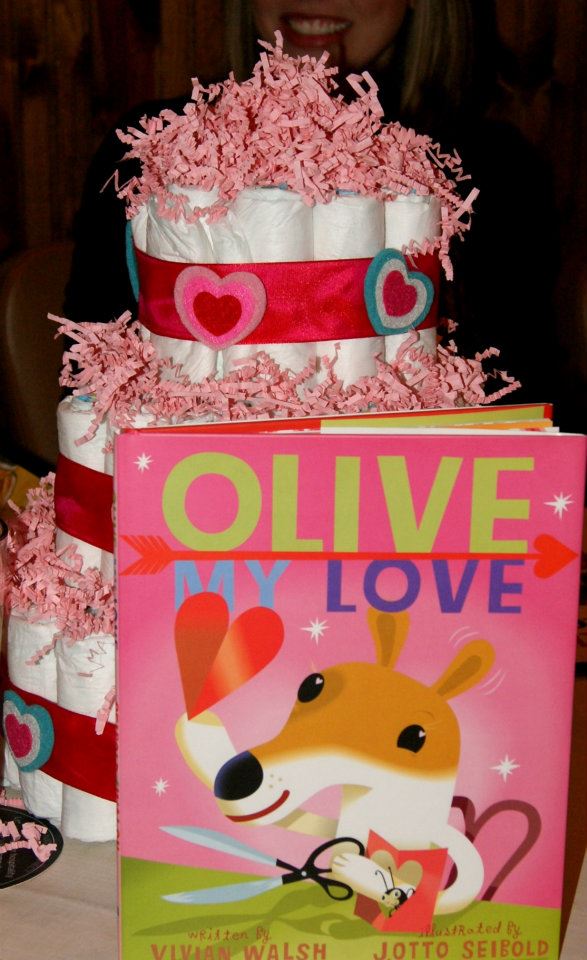 The Megow’s nicknamed Olive “Rocket” so Ashley made her diaper cake resemble a rocket! 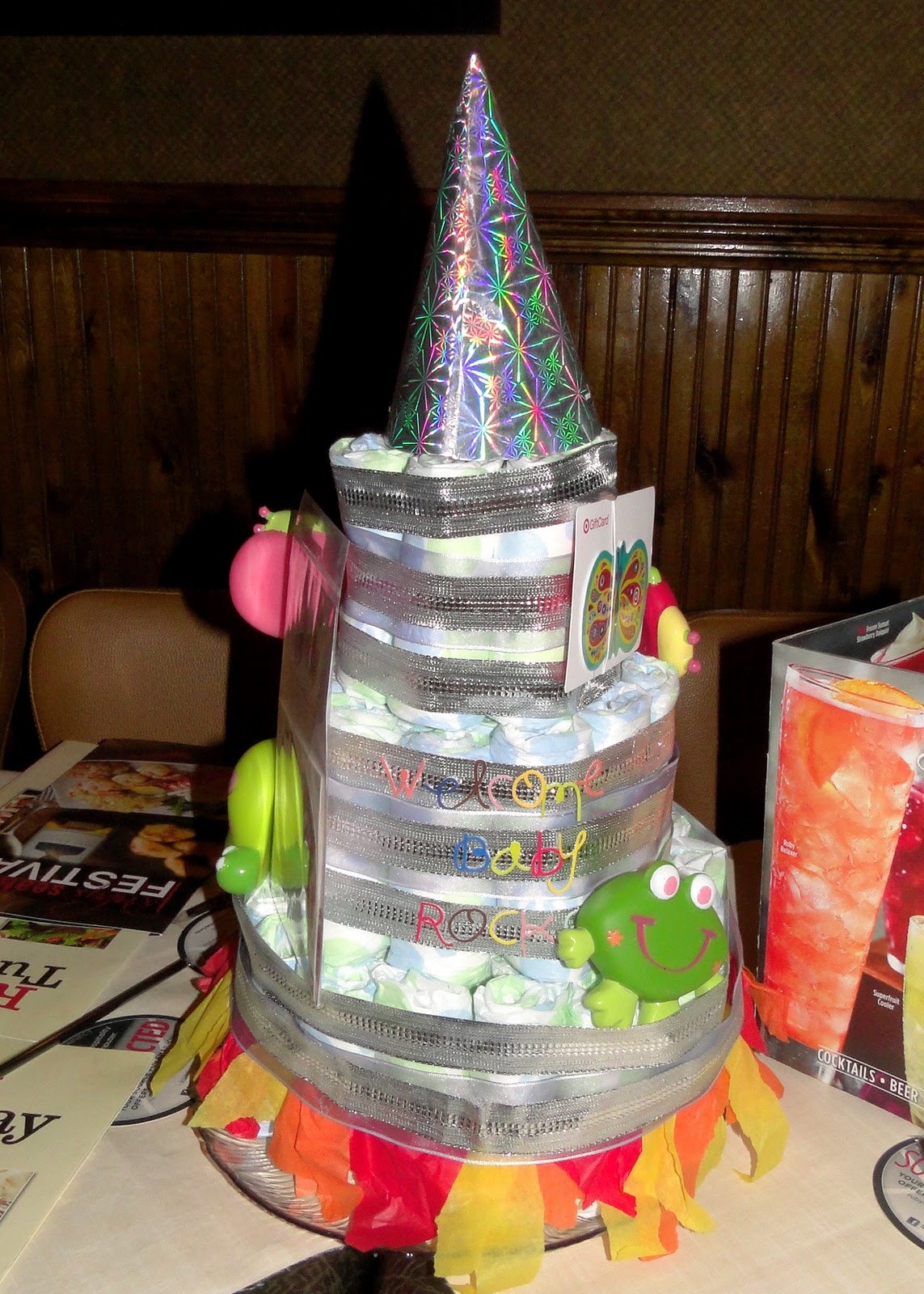 The Megows also love cookie cake (especially Seth) so I bought the biggest one they had!
The lady was so confused when I called and asked if they could either put a picture of a big olive on the cake or of a rocket haha 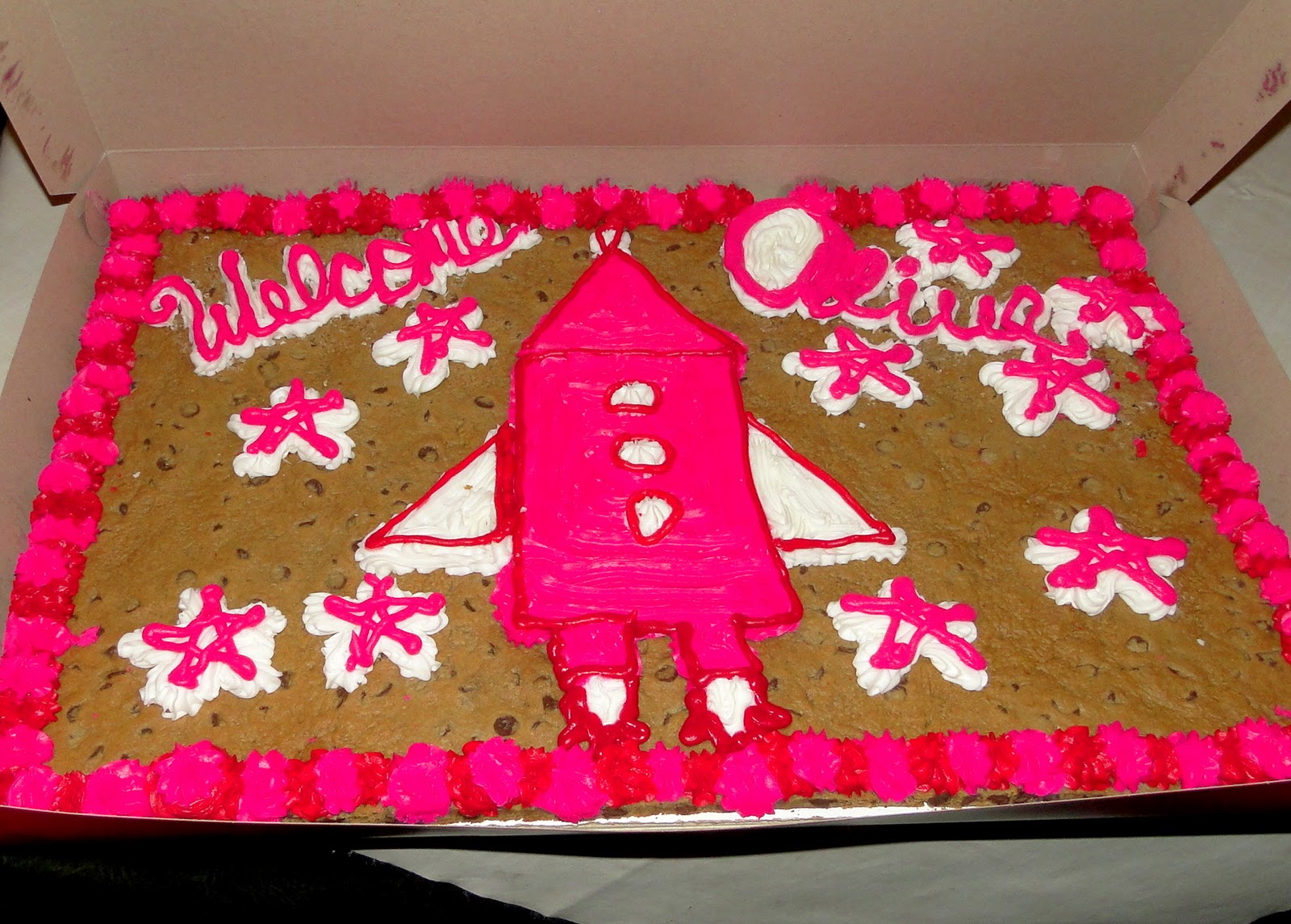 Ready to grub out! 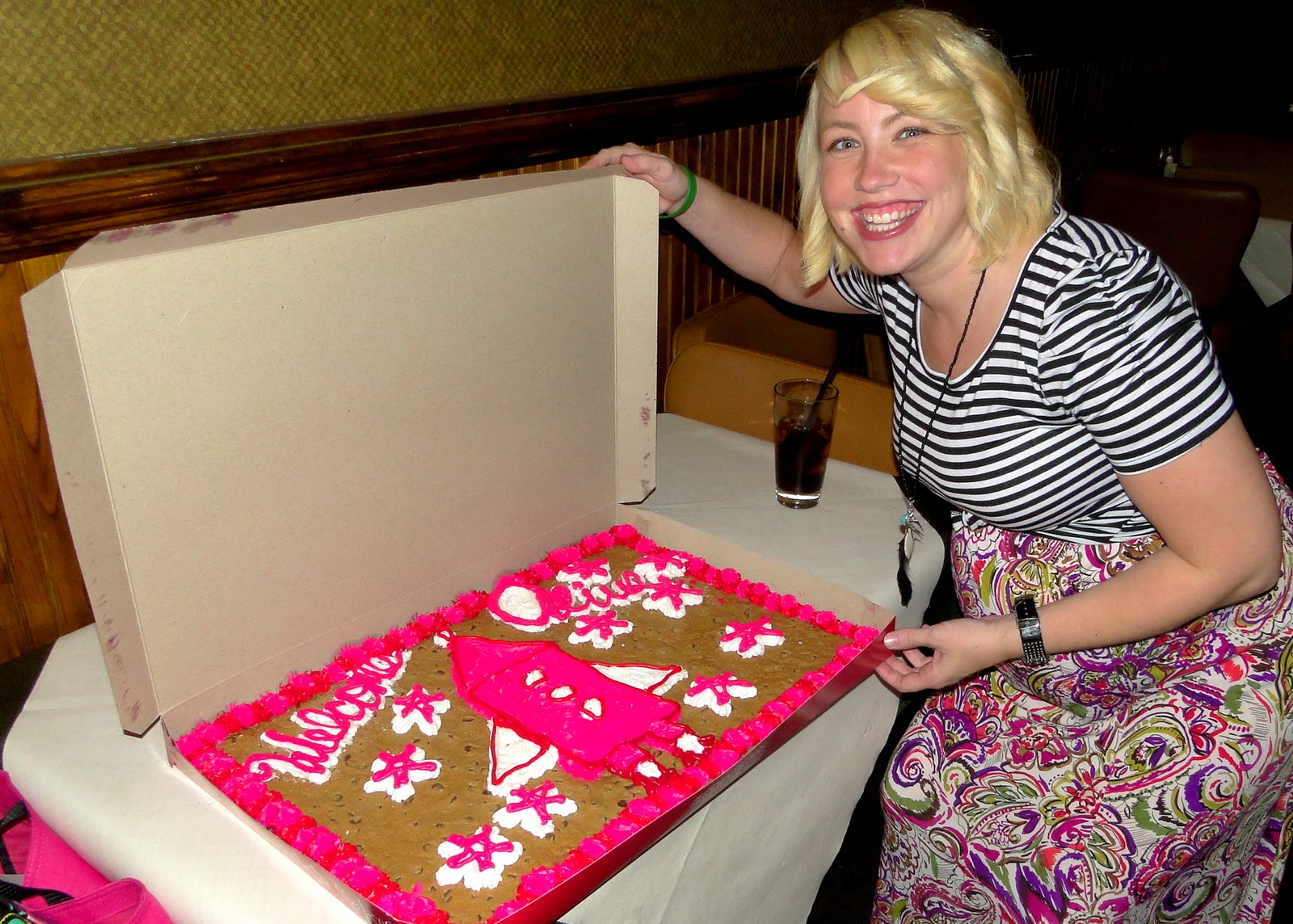 When we started planning we asked Crissy where she’d like to have it and, duh, the first choice was Olive Garden. The name kinda fit plus, again duh, Crissy is a born-and-raised Valdostian so she is obsessed with Olive Garden (do you know when it opened up here a few weeks ago that the line was over three hours long to get in every night? That people were waiting outside at 2 pm when it didn’t even open until 4??? Obsessed I tell you!). We couldn’t have it at the good old O.G. though because they weren’t opened yet so we opted for Crissy’s second choice, Ruby Tuesdays.

I myself haven’t eaten at Ruby Tuesday’s very often. It’s attached to the mall so I pretty much forget it exists. Um. It’s GOOD! I LOVED my meal and the prices were so great. The staff was also wonderful to work with. They were mega laid back and gave us a nice big space all to ourselves. They didn’t make us combine checks, let us bring in the cookie cake, didn’t rush us, and didn’t have any minimum amount we had to spend or anything. Our waitress was awesome and I WILL be doing something like this again there, I loved it!!!

I was also impressed with the turn out for the shower. Robyn hosted me a more “legit” shower for Blitzen (meaning it was at her house and she sent out real invites) and I only had like five friends or less come. We had this on a Saturday night, at a restaurant (where everyone had to pay for their own food), and only did Facebook invites and within 24 hours of posting the event Crissy had 13 people saying they were coming…and they actually CAME! It is just a testament to how amazingly awesome Crissy is and to how many people love her 😉

I love that we were all at one BIG table! 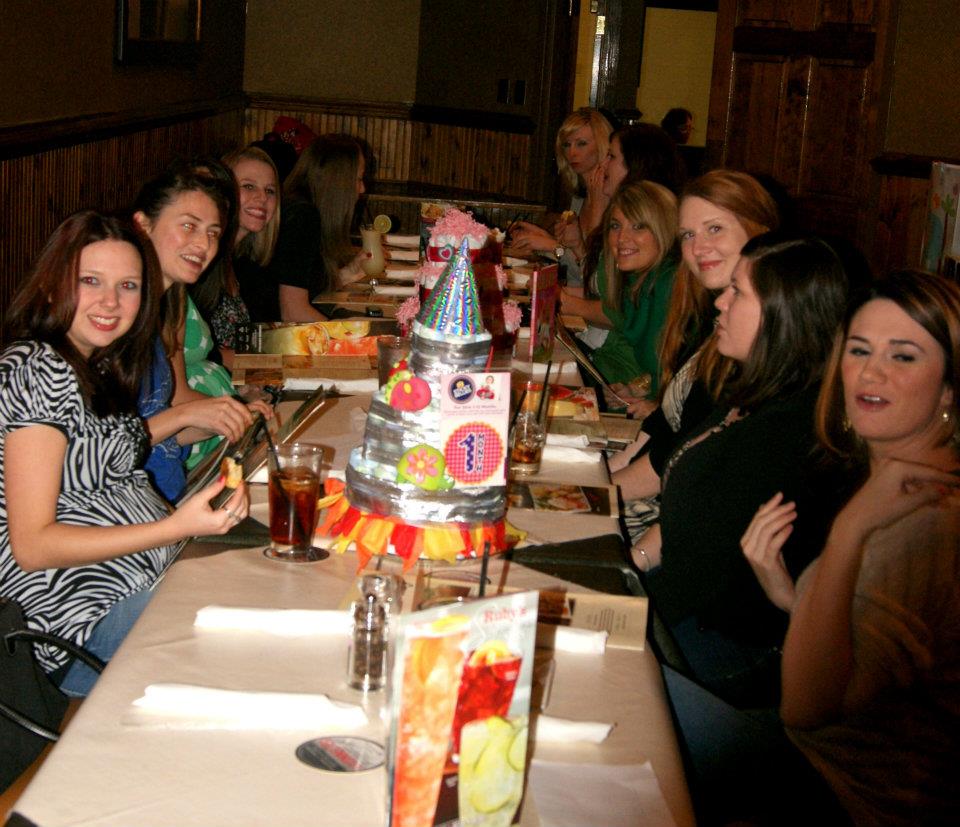 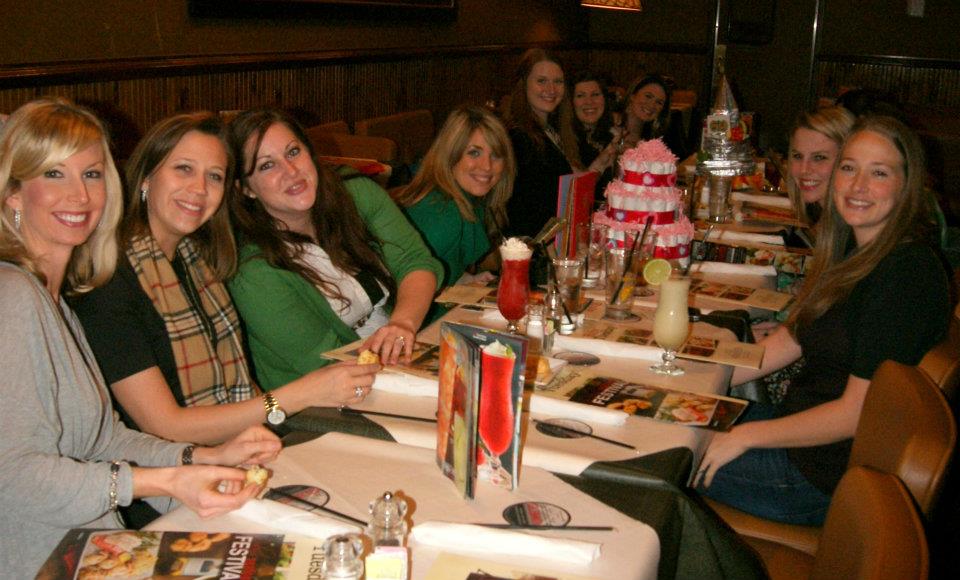 I wanted to get shots of everyone there…let’s see how I do remembering names!
Ayla (who just had a baby last week…) and April 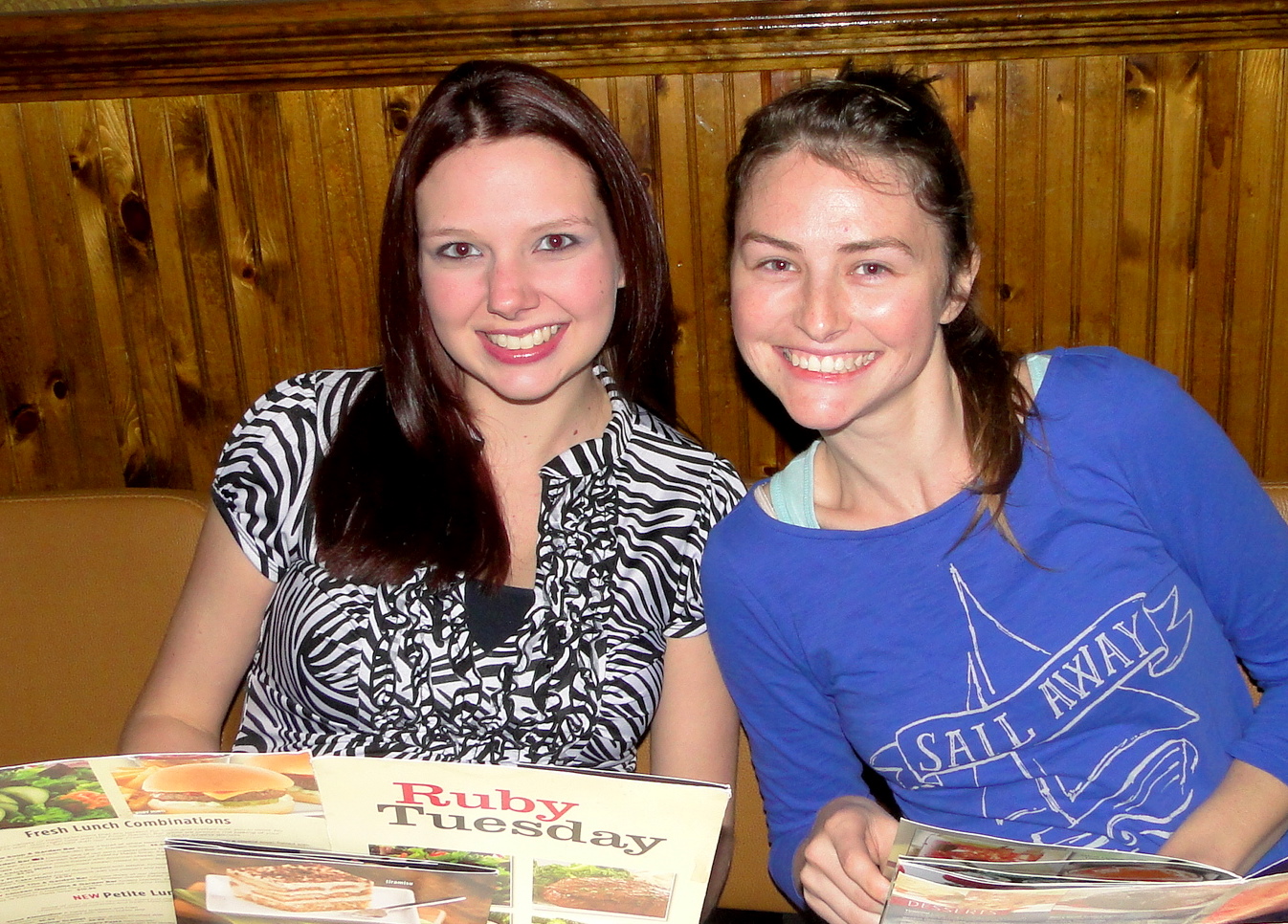 Kayla, Ashley, Brandi, and an awesome face from Crissy 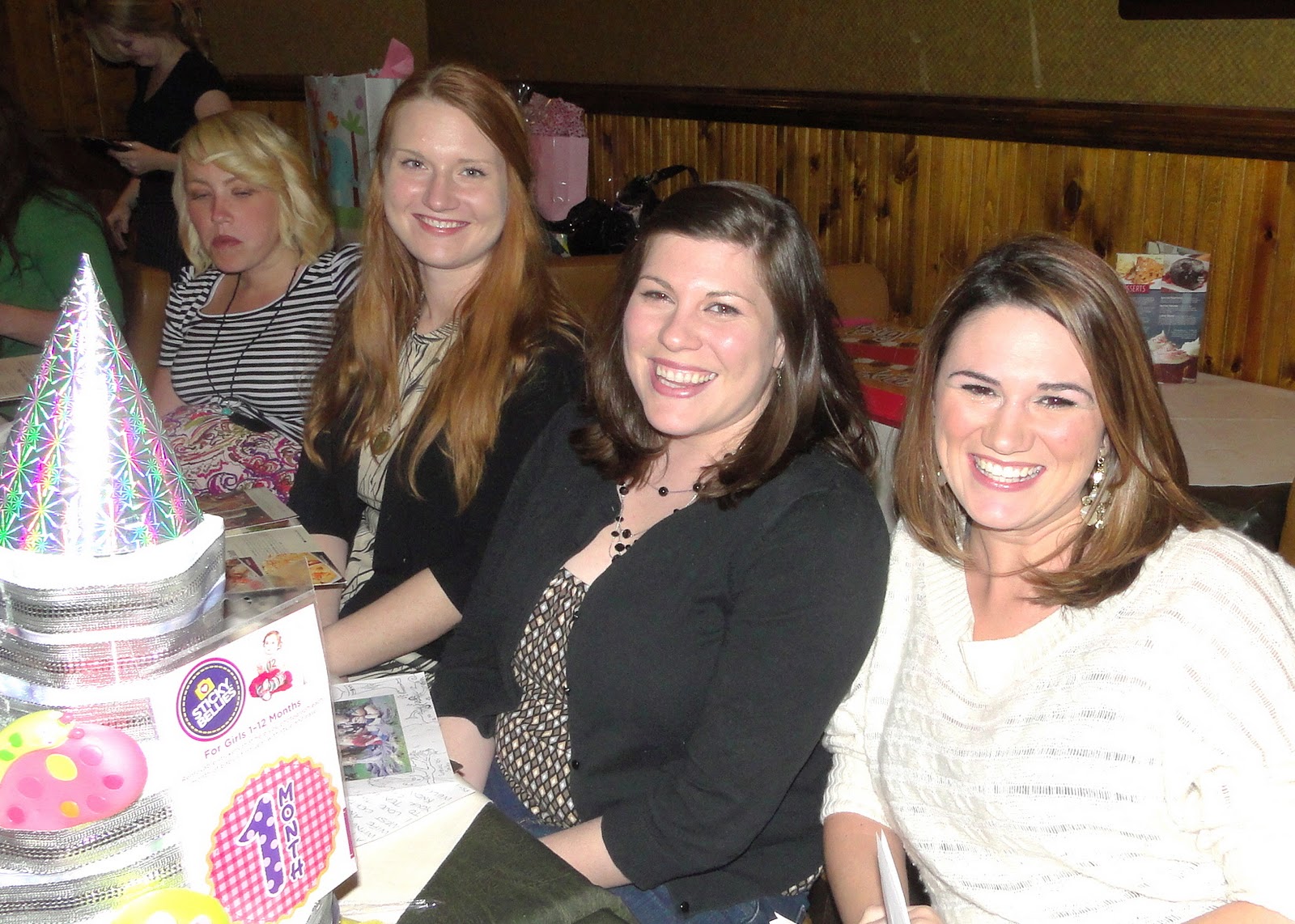 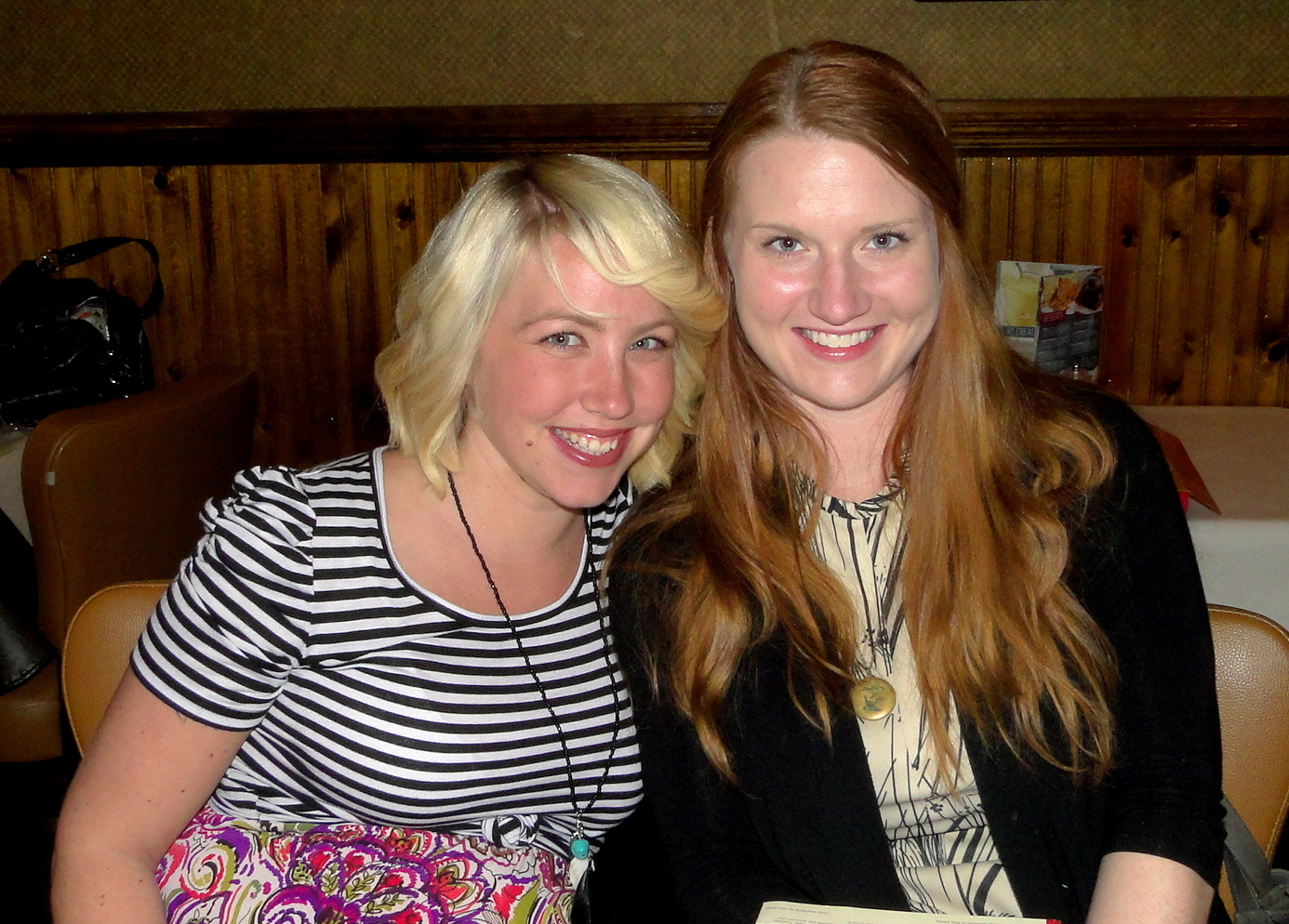 Robyn (due in July!) and Casey
Casey: “Dang I’m surrounded by pregnant women…it better not be contagious!” 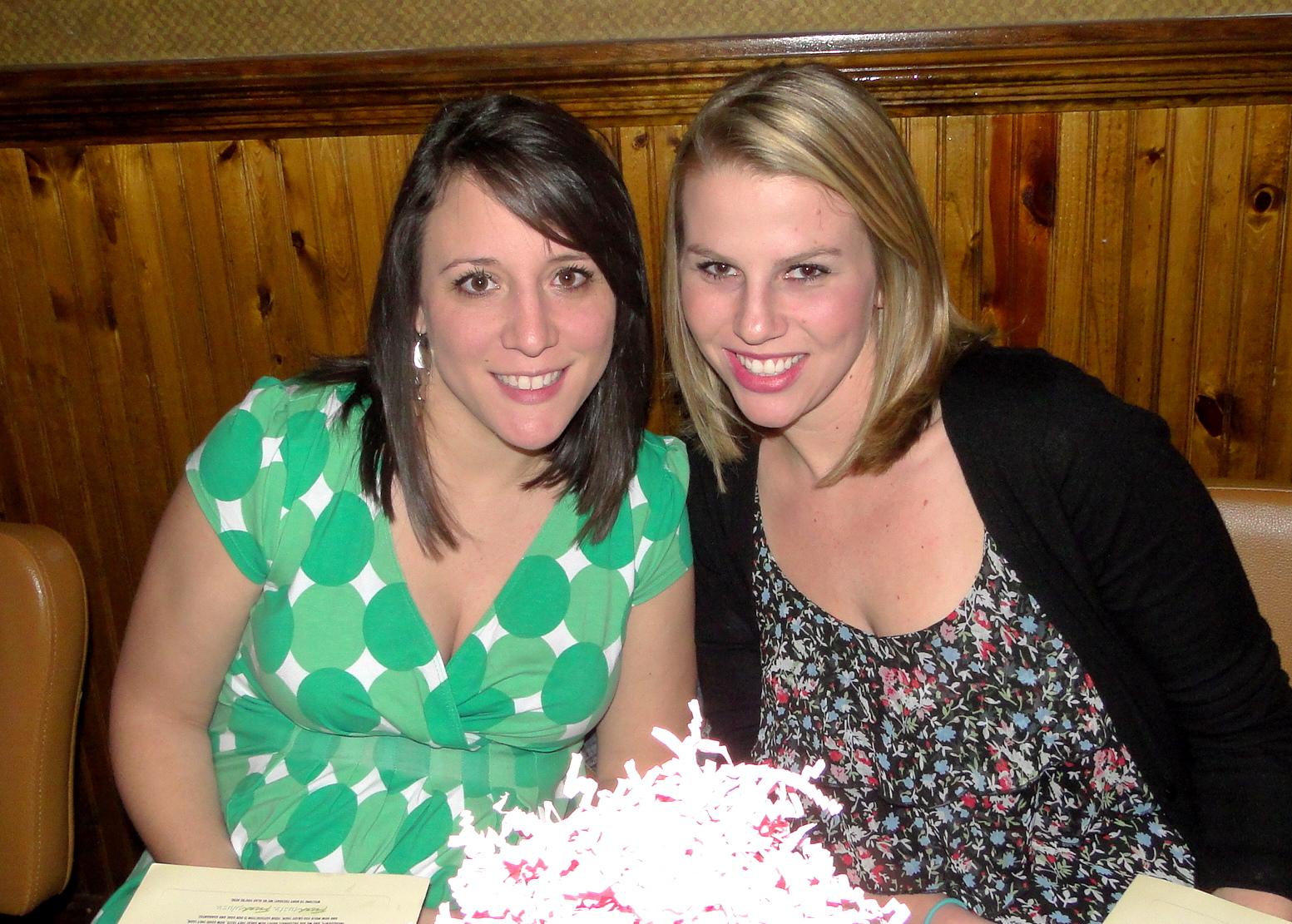 Liz and Brandy (due soon as well) 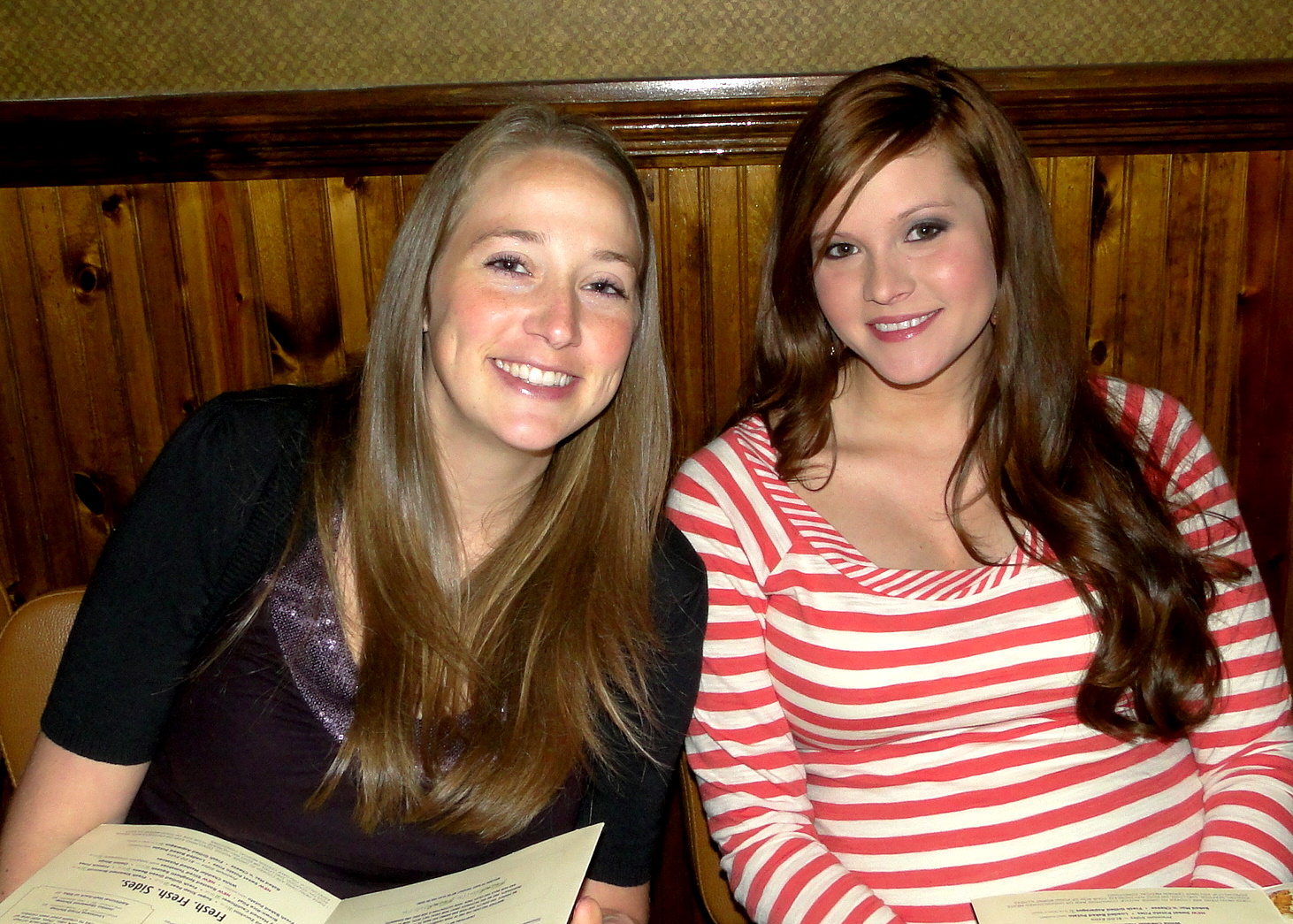 Kristin (who is also pregnant…hope I got her name right…), Nicole, and Whitney 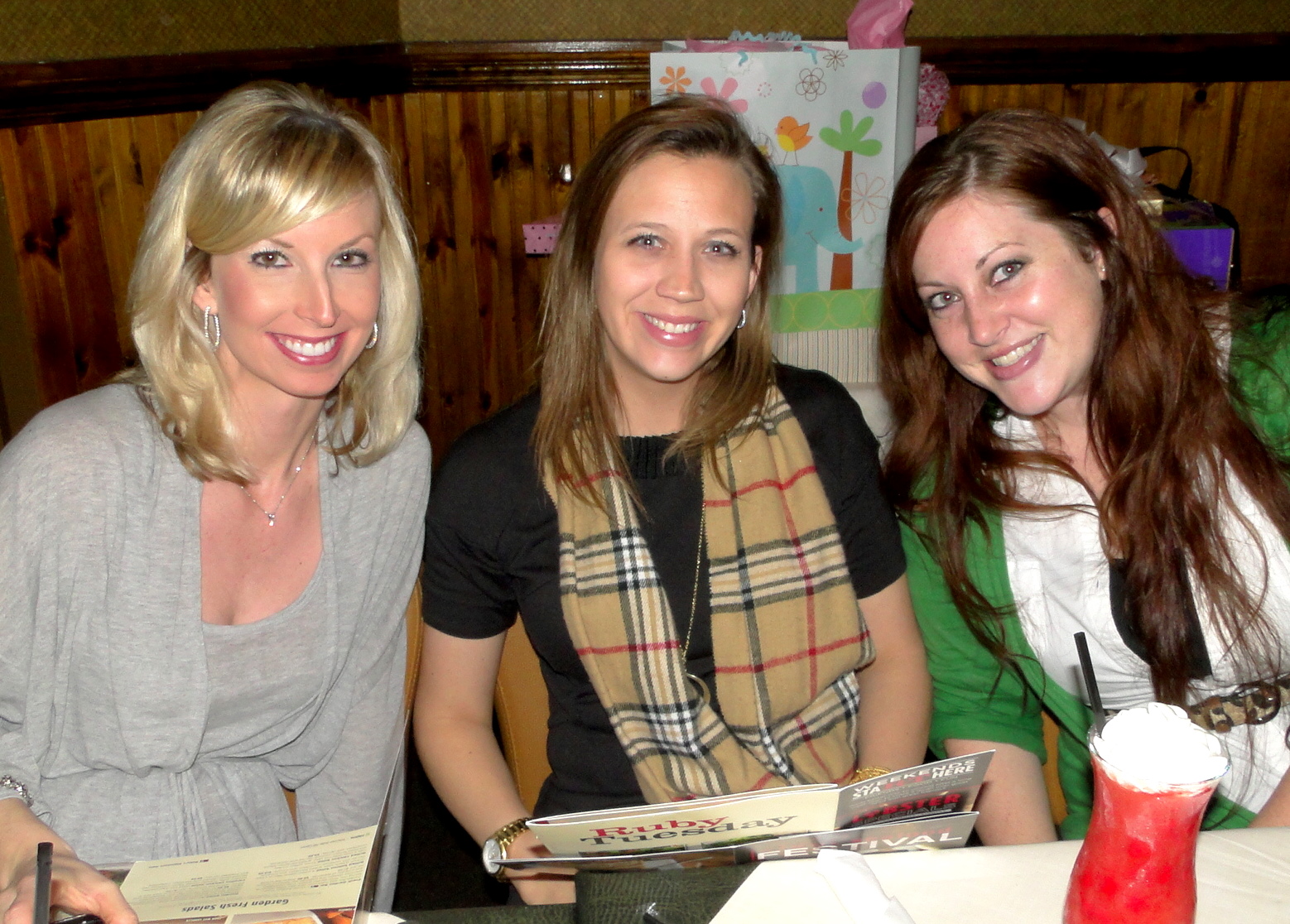 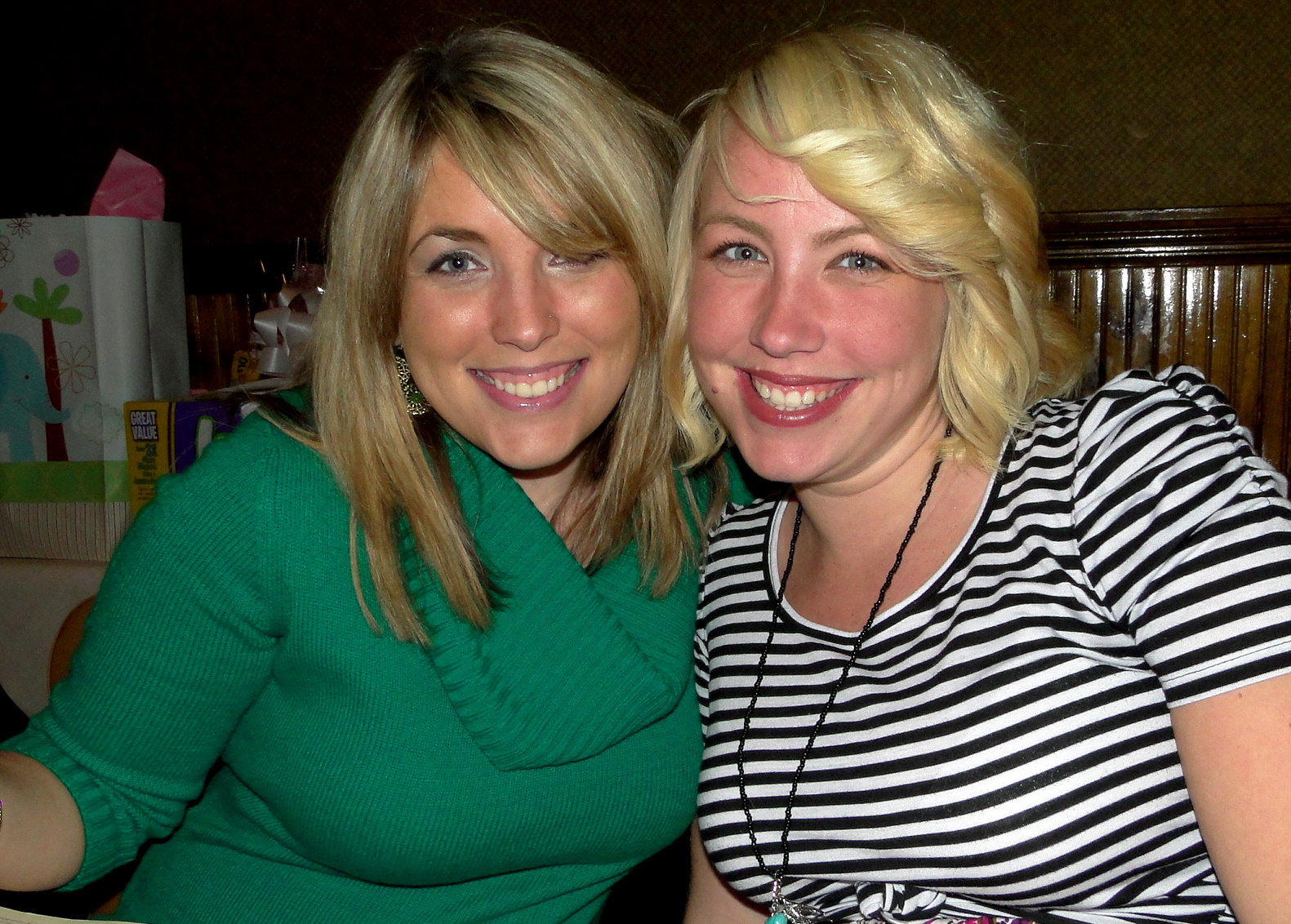 While the whole thing was meant to be fun and chill, Ashley and I still wanted it to be a shower and what is a shower without games??? I figured after we all ordered we’d play a couple games…but then we all ordered and I was enjoying the night so much that I forgot about the plan. Yes, I forgot about a PLAN. I know, I was having that good of a time! My original plan was to play a game where I’d set a timer and have everyone write down as many uses of the word “olive” that they could think of in like a minute (like olive juice, olive oil, etc). Then whoever wrote down the most would win! Well Ashley worked hard on a Megow Family themed crossword puzzle so that trumped the olive game and we did the crossword instead. It was entertaining to watch everyone try to fill in the answers! Kayla won and since she’s a “wild woman” I knew she’d love the animal print stationary (I love giving stationary as prizes, to me it’s so useful!) 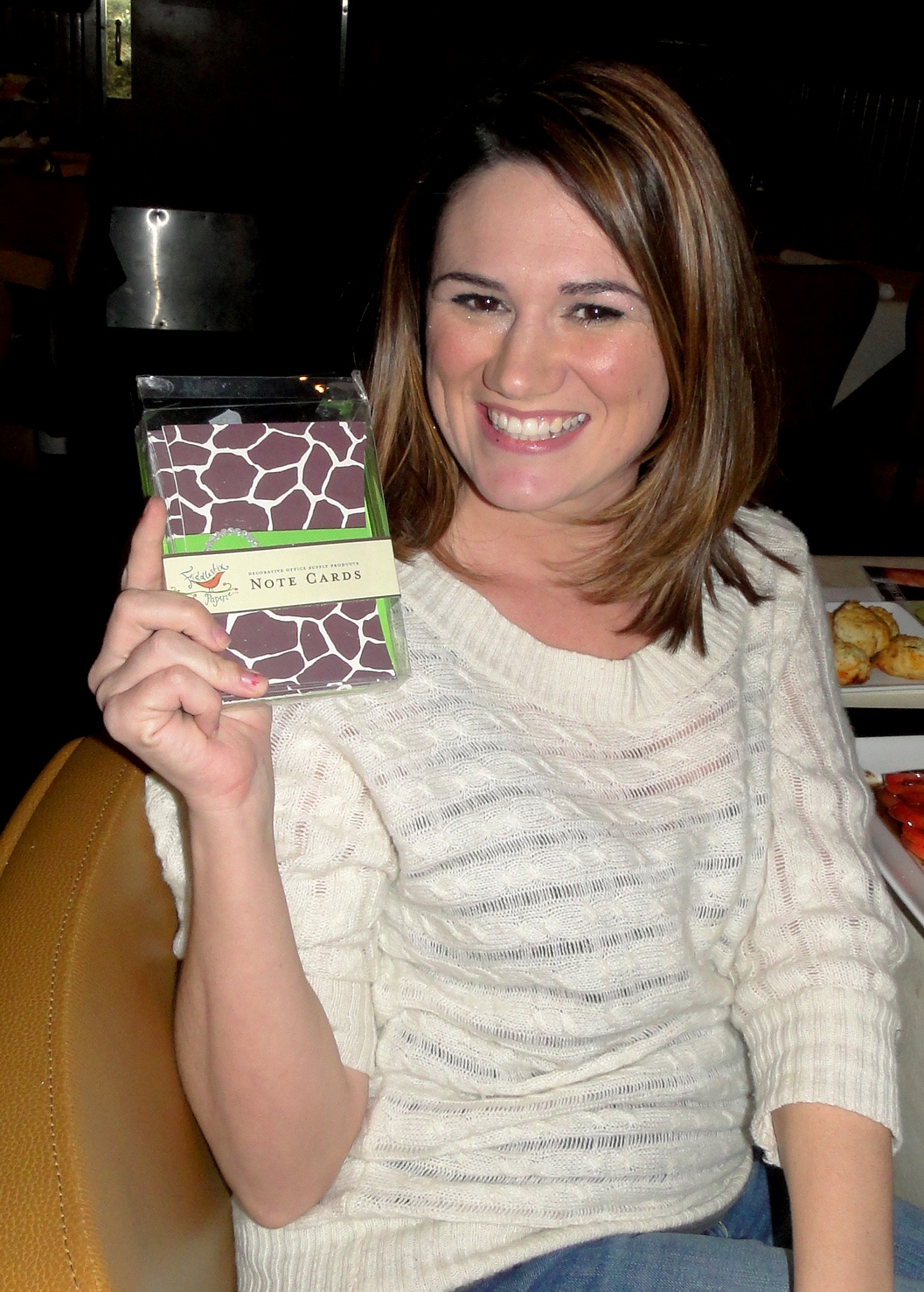 Another idea I had to make the night special was for everyone to print out a picture that they thought best represented Crissy as a mother. If you’re facebook friends with Crissy then you KNOW the girl posts mad pics on fb like every day. I thought it’d be a nice idea for everyone to pick a picture then write out something about Crissy. As a mother, as a friend, whatever. I bought a cute notebook from Hobby Lobby to put them all in so while Crissy is stuck inside and healing from her c-section (and maybe a little sad that Olive is her last belly baby…) she can be reminded of the amazing mother she is and how many friends she has who love her! Most of the guests forgot to bring theirs with them so we ended up going around the table and either sharing our picture or saying something about how much we love Crissy. She was probably mega embarrassed, but it was SO touching. Sweet April was too emotional to even speak. That’s how much all of us love Crissy! I started and did a super short thing just to get the ball rolling and I kinda wish I’d gone last instead as I would have been much more mushy 😉

Since it was a diaper and wipe shower there weren’t many gifts to open so we did that as the eating died down. Brandi made Olive this adorable blanket in a rocket print…so special! I love that Olive will have something of her own since you know as the fourth baby and third girl that she’ll have a lot of hand-me-downs! 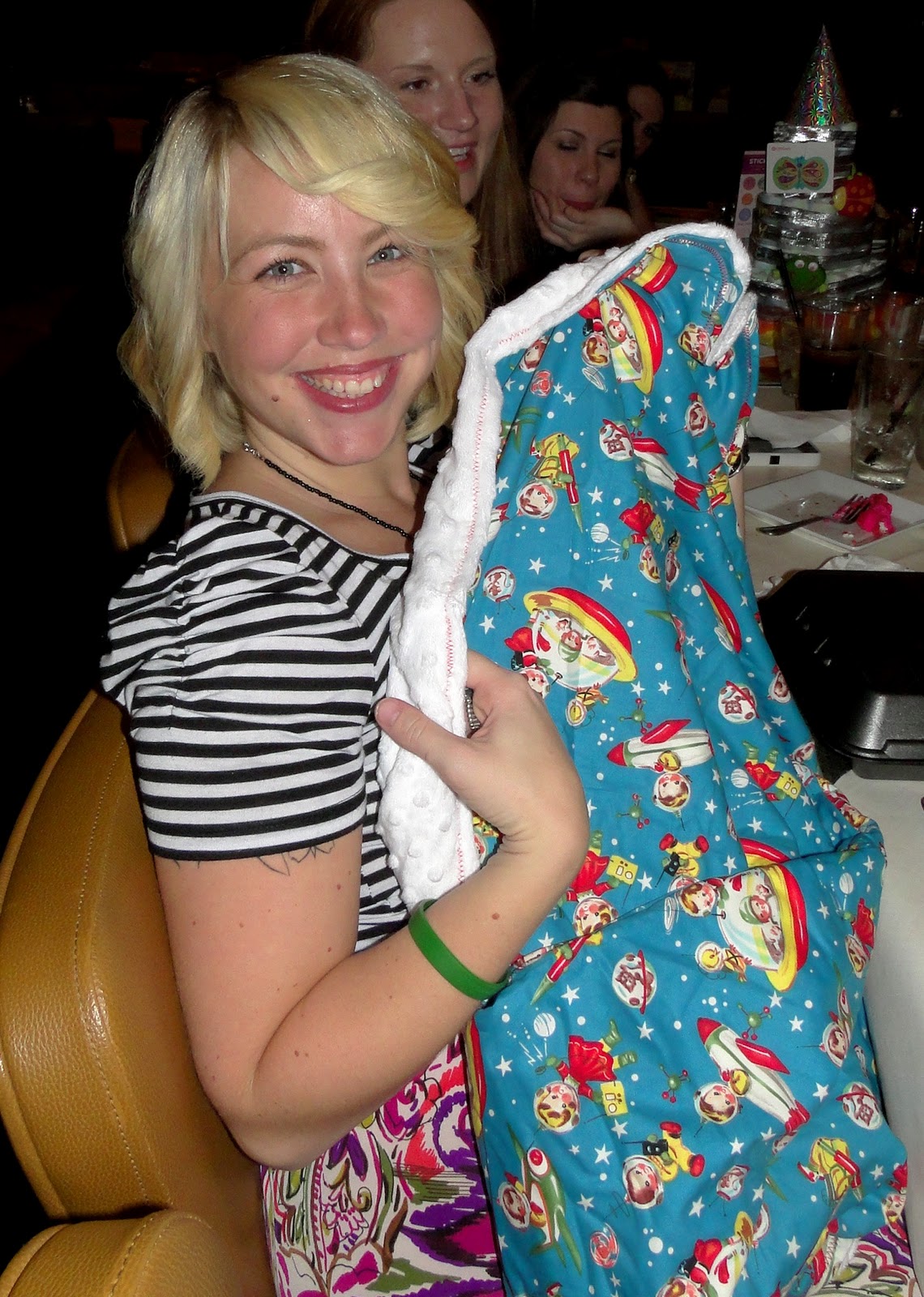 A picture of all the pregnant ladies!!! 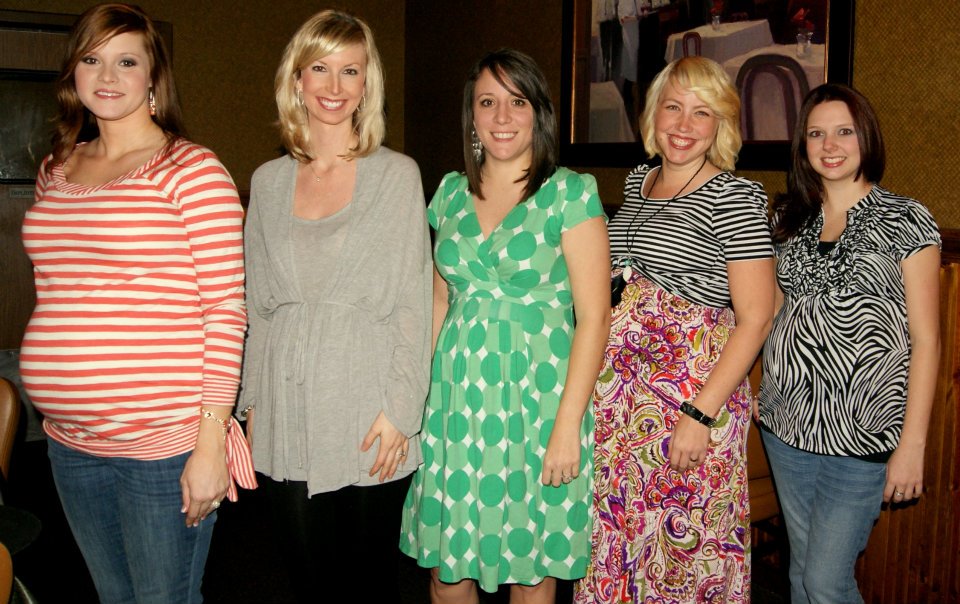 To give you an idea of how far along they all are:
Ayla (far right) had her baby last week, Crissy is having hers next week, Brandy (far left) is due soon, then Kristin (hope that’s her name…the tall blonde) is due sometime this summer, and Robyn is due in July! I still can’t get over how awesome all these ladies look!!! 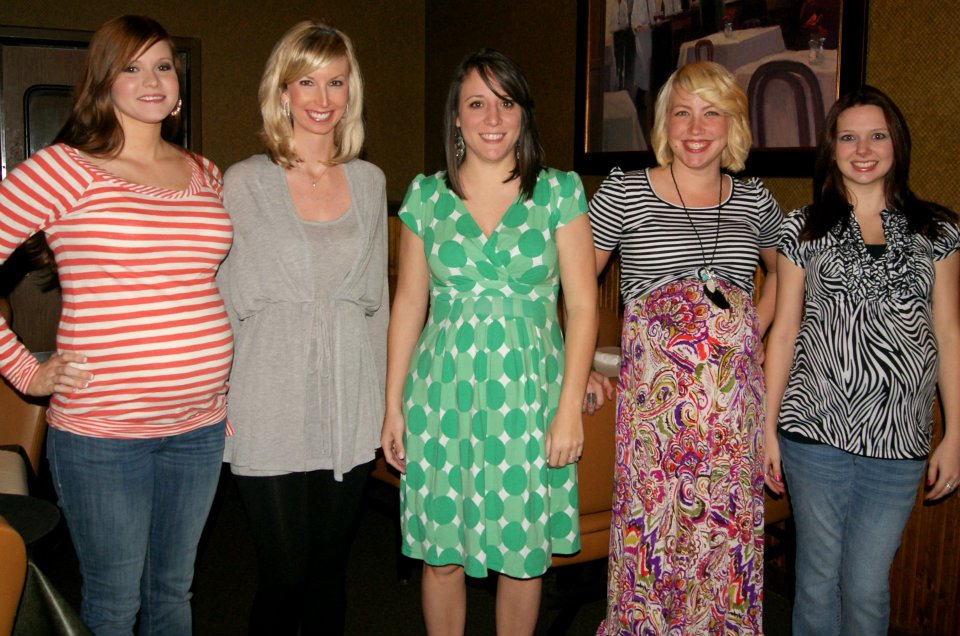 Had to get a pic with Brandi before the night ended 🙂 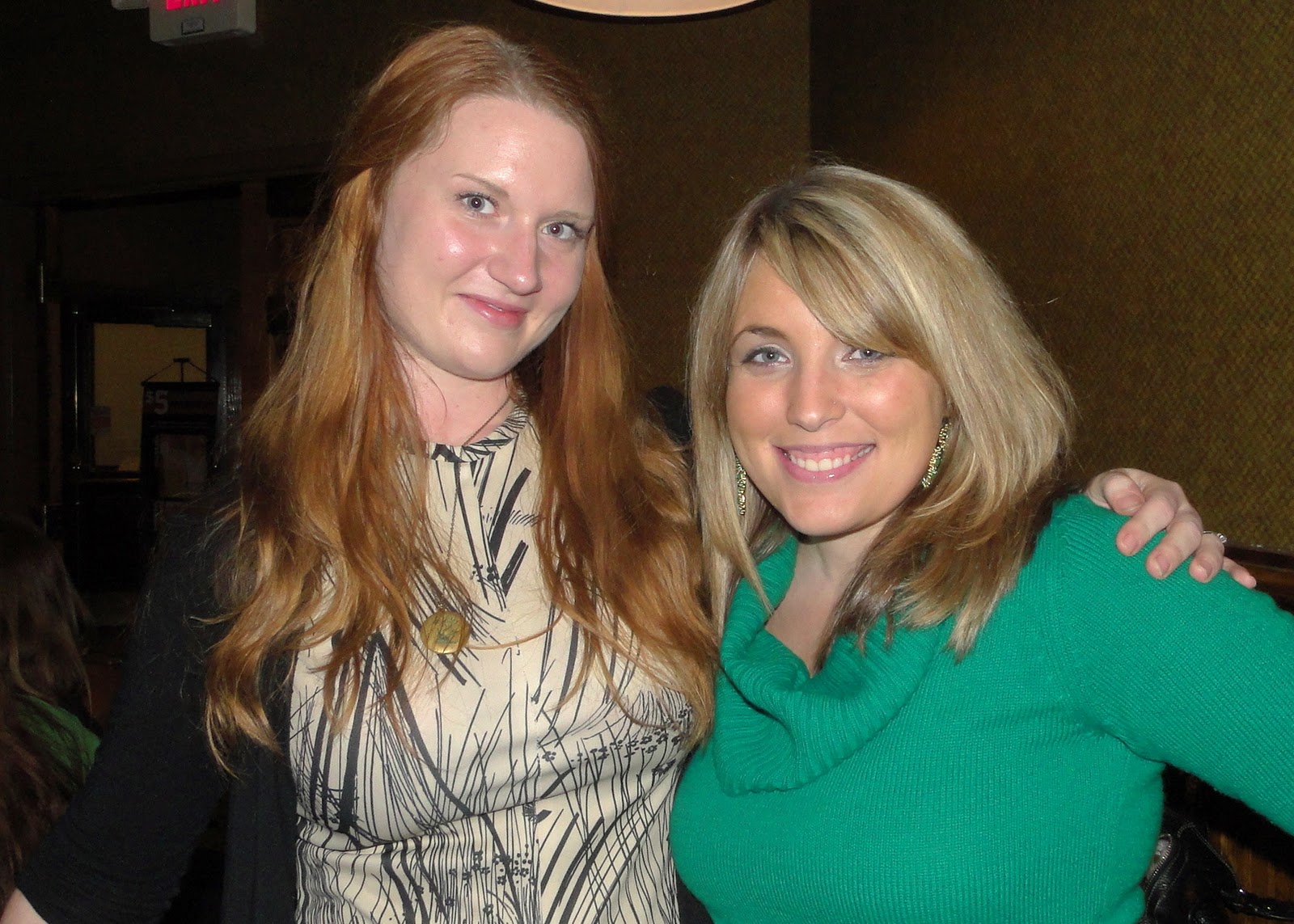 Crissy with her hostesses! 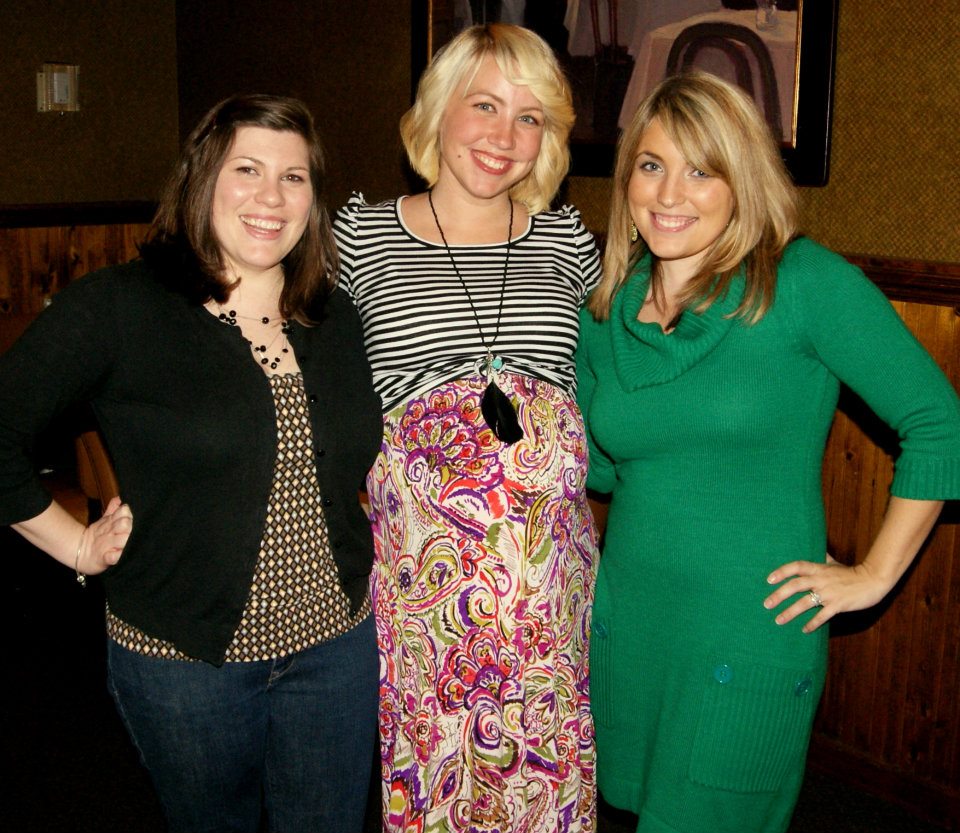 I adore all of Crissy’s children but I am especially looking forward to Olive. Kye is a year younger than Stevie (although he still ADORES her! his new thing is to say “my birthday is in March and Stevie’s is in March!”) and is about six months older than Neela. Olive and Brittlynn will be right at 2 months apart, almost to the day! Plus they are the same sex so I’m mega pumped about them being bffs. And if Britt looks like me and Olive finally gives Crissy a child who looks like her…then people will always think Olive and Britt are sisters too 😉

It was a very, very fun evening! I felt bad having to bolt out of there pretty quickly because I had to get home to nurse Brittlynn. Life of a nursing mama right? But I had a GREAT time! More importantly though I hope Crissy enjoyed herself and that she felt loved for the wonderful person she is!