We got back pretty late Sunday night and totally forgot that we’d have to be turning around and driving to Columbus Monday morning (a 2.5 hour drive)! While it was tough being in the car that long, it was also sad for me because that Columbus drive is the last time I’ll be driving that far away until the baby is born…not a big deal to most but how will I SURVIVE being stuck in Valdosta this long???

Anyway we went to Columbus for the Aflac State Kick-Off Meeting. I really enjoyed this meeting last year as they do a great job getting you pumped about Aflac and motivated to do great work (not that I work…but I guess they motivate me to be supportive of Zach’s work!).

This year’s meeting was even better than last year because now that Zach has been with the company a full year he actually got some (well a LOT) of recognition!

I am so so so proud of my husband and the incredible first year he has had in the working world. He had to get up on the stage ELEVEN times during the meeting! Once was for some money he won in a contest back in December but the other ten times were ALL for awards he’s won based off his achievements this year! He won more awards than anyone else present and has only been doing this for a little over a year!

His ten awards included: one for National Convention (San Diego Trip), State Convention (Asheville Trip), Triple Crown (Atl Trip), All Star, Bronze Star, Silver Star, Gold Key Club, Highest Rookie Annual Premium for the year (he wrote $431,239 worth of business! Almost the amounts of the 3 people below him combined!), The 7th top New Account Opener (11 accounts), and finally (drumroll…) #1 Agent in the STATE! He lead in Annual Premium written for the YEAR! He’s the only one in Georgia to qualify for President’s Club (the Paris Trip) which is only the top 85 agents in the whole company!

I took a picture of each award he won but here are just a couple of them. He’s with our State Coordinator, Tripp Amos. The last one is the huge award for being #1! 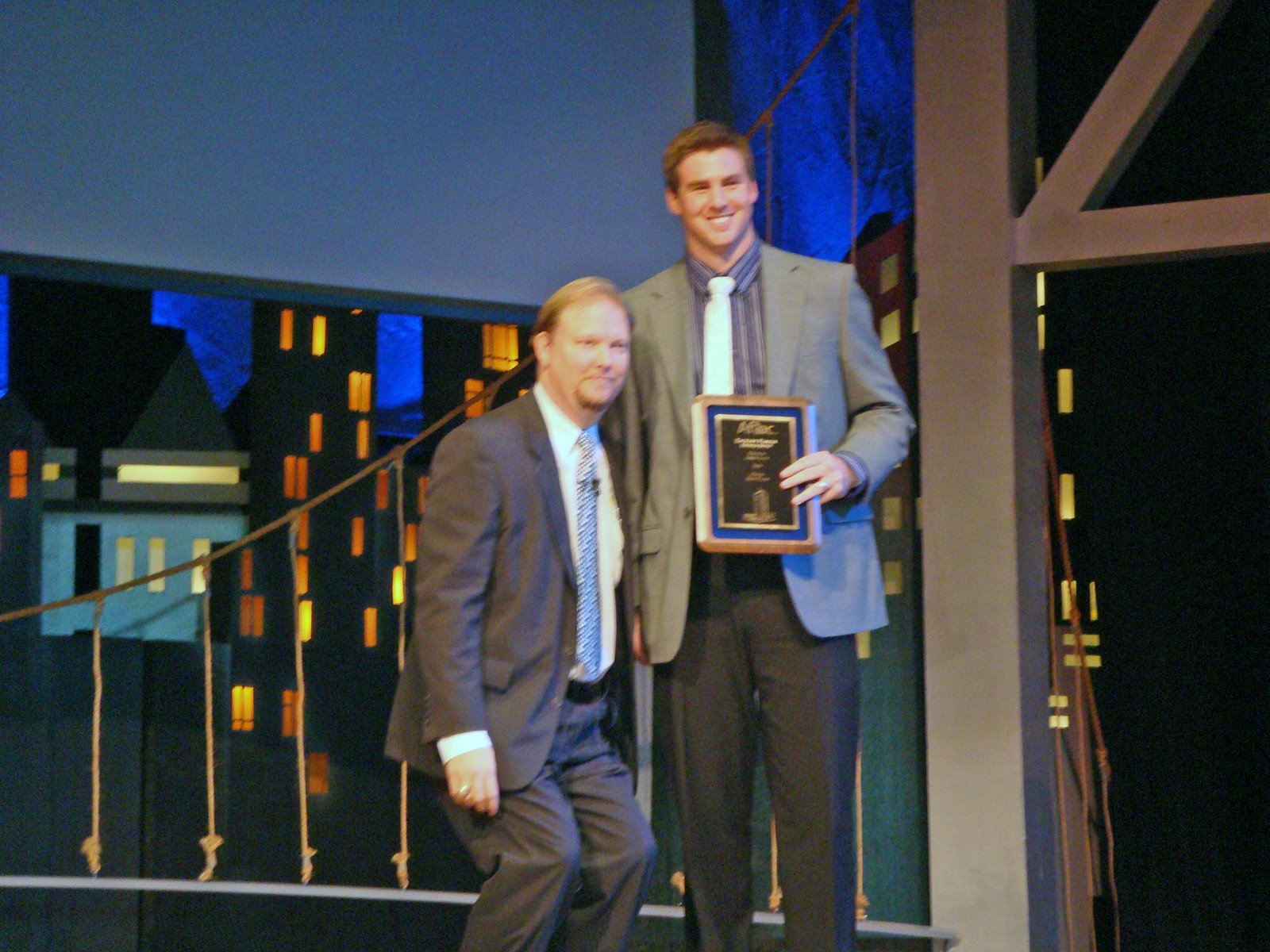 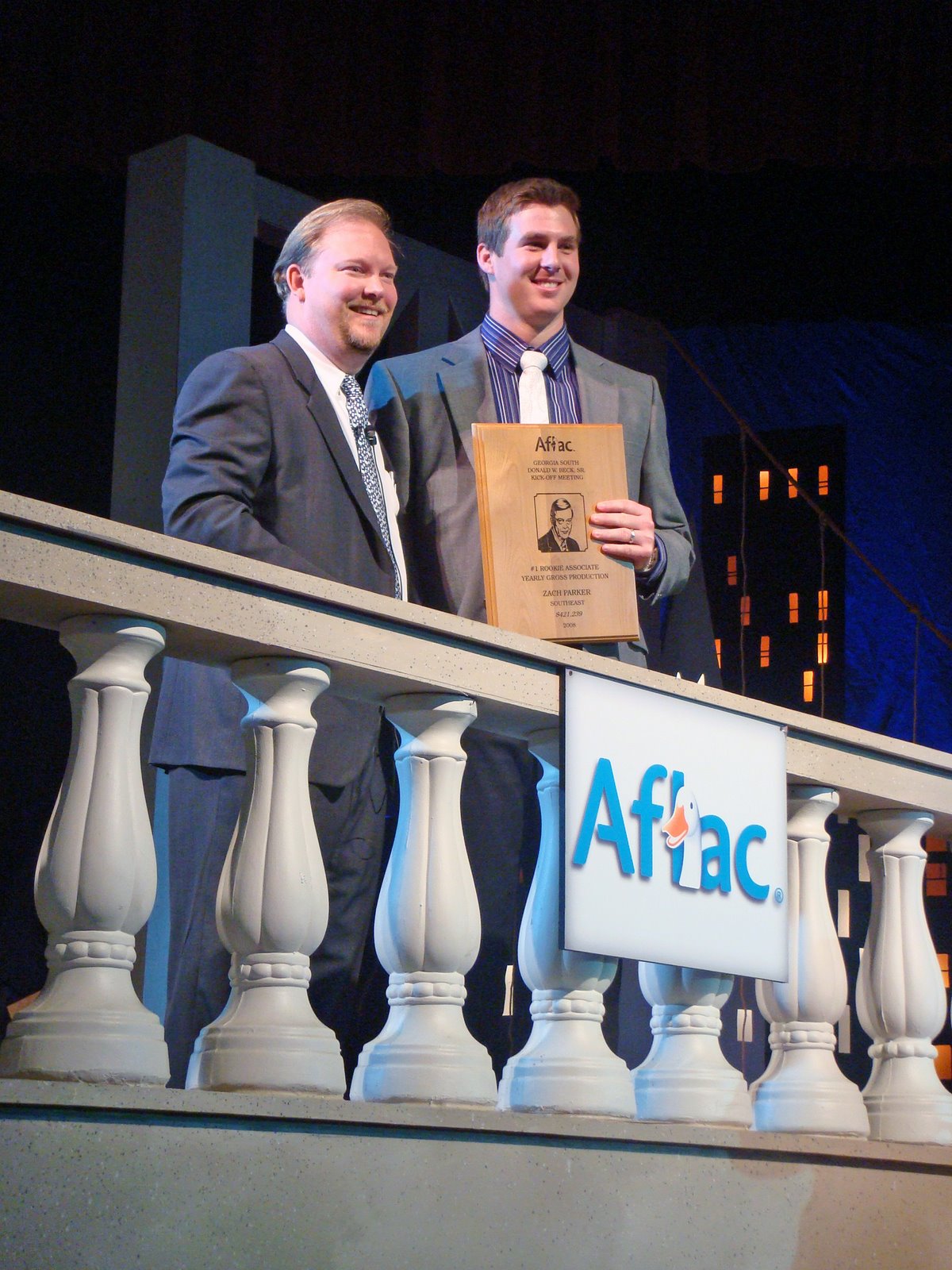 I know I don’t brag on Zach often (I joke with him that God put me in his life to keep him humble) but I am so proud of him and I was so honored to be his WIFE and see him be recognized like he was. Aflac has been such a blessing to us! After college we really did everything we could to try to pursue something with football and when that didn’t work out (again though God is so good! I can’t imagine if we’d gone with the American Football League with this economy and that they never ended up starting it!) I really worried that Zach would have a difficult time. Football was SUCH a big part of his life as well as his identity.

Thankfully we got pregnant pretty quickly and I knew becoming a dad would give Zach a new focus and a new identity as Daddy rather than #85. However, I never even thought that he would do so well with Aflac and that his job would become something that he could be competitive with! Not only does it put food on our table but it also has provided him with that competitive outlet he had with football!

We are so so blessed to be with a company that has so many amazing benefits and that fits Zach’s personality so perfectly! How many people graduate from college and immediatly start work with their dream job? And of those few how many excell in the way Zach has so quickly? Not many! I could go on and on about Zach’s achievements and what a great provider he is for our family but I don’t want to brag too much (I’m not his Mama haha). I just thank God for blessing me with such a great husband and blessing my husband with such a great career! Hopefully this year will be filled with even greater achievements…it’s tough to stay #1 but I know Zach can do it!