The wedding fun officially started on Thursday March 29th! As you all know I’m pretty hardcore about the picture taking but when a bunch of people are taking pictures I kinda shy away a bit. So instead of taking a ton myself I just asked all the other picture takers if I could steal their pictures once they posted on Facebook. So in advance I wanna say a big thank you to Melody, Jenna, Bethany and Brittany as many of the pictures you’ll see in these posts have come from them. People also took a ton of pictures with Casey’s camera. But she’s a newlywed so she hasn’t gotten around to posting those pictures yet. Once she does I may be either updating these posts with those pictures or just making some new entries to go along with the new pics 😉 We’ll see!!!

Thursday afternoon we all met up at Nails By Chris (The BEST place in town. Like even my Atlanta friends would be mega impressed with this place!!!). I was the first one there and they all kept thinking I was the bride…made me feel young and I was pretty tempted just to roll with it. Haha. It was a BIG group of us up there and it got a little crazy because Nails By Chris is ALWAYS packed. I was shocked we were all able to get manicures and pedicures in under 2 hours. Pretty impressive!

Jolee, Payton, Mrs. Charlotte and Casey in the back! 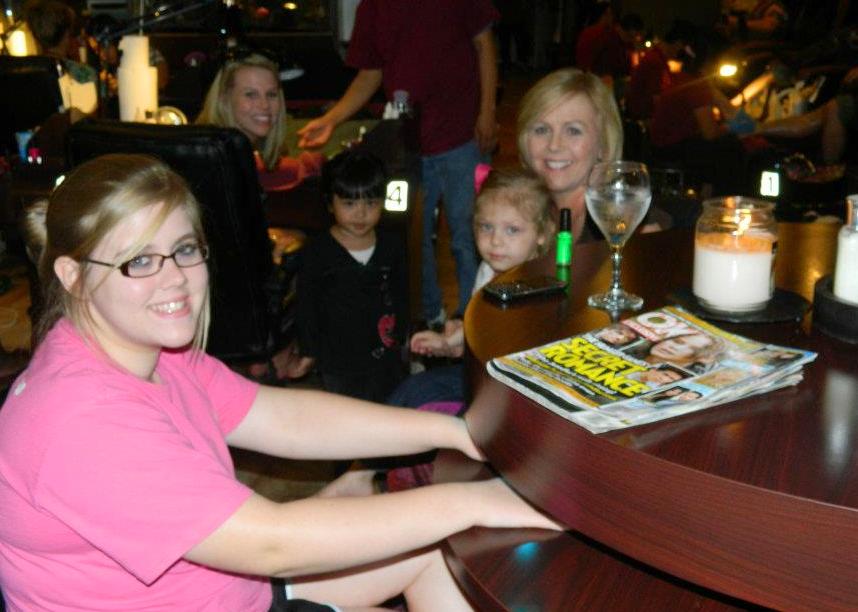 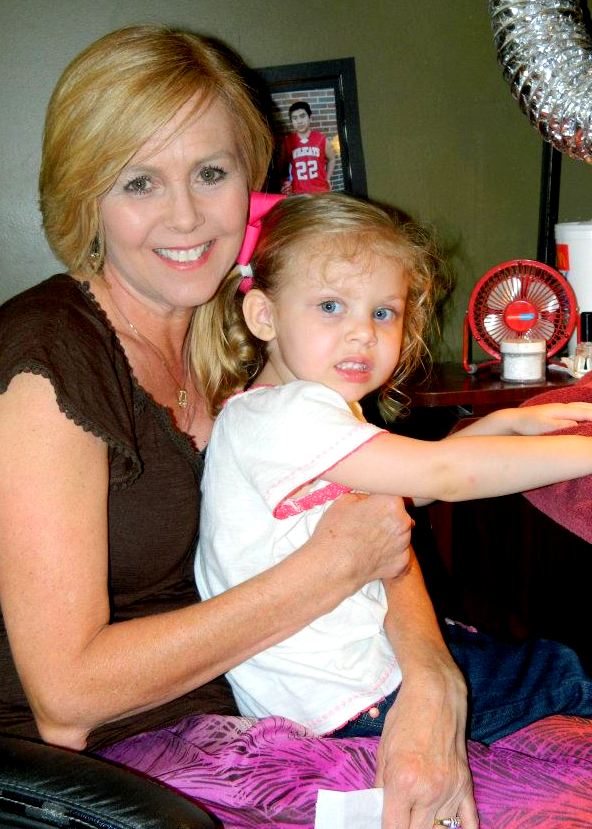 Colt (who did not get anything done haha), Courtney and Me! 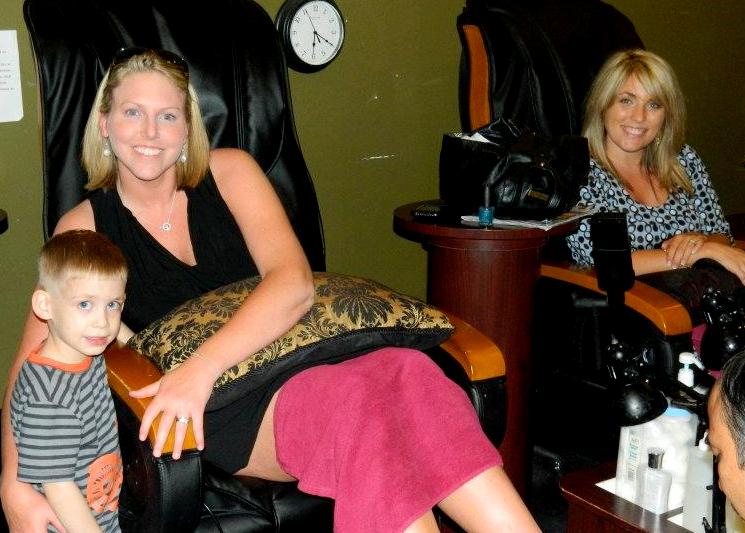 Melody (who actually graduated from my high school and was Casey’s roommate in college – SMALL WORLD!), Jenna, and Casey 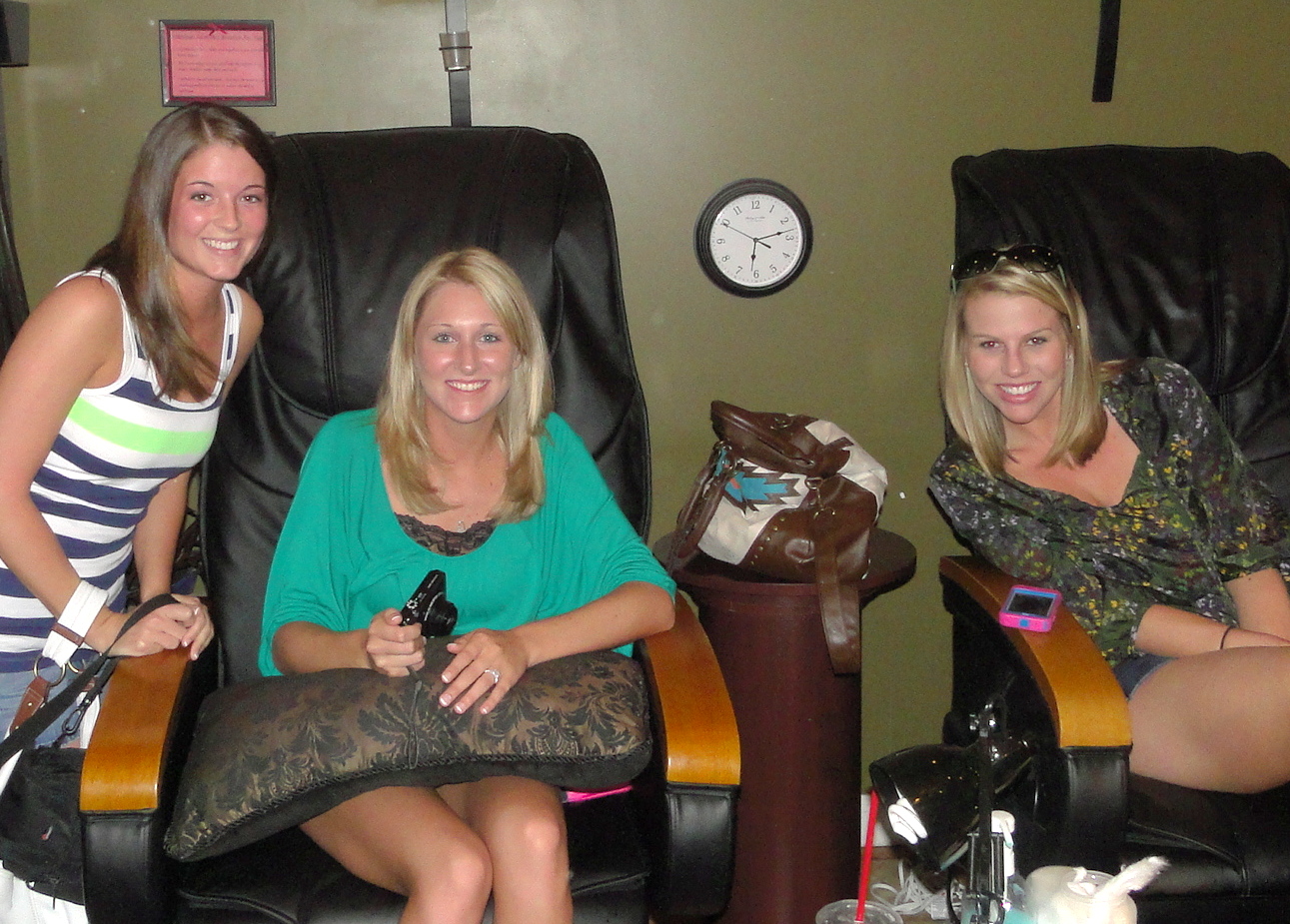 You can’t really see everyone but it’s Jenna, Casey, Emily, Courtney and me gettin’ our pedicures
Casey was such a cool bride…she told us to do whatever we wanted for our nails. She didn’t care (Jolee got blue, Casey had pink, several of us had french). Such an easy-going bride for sure! 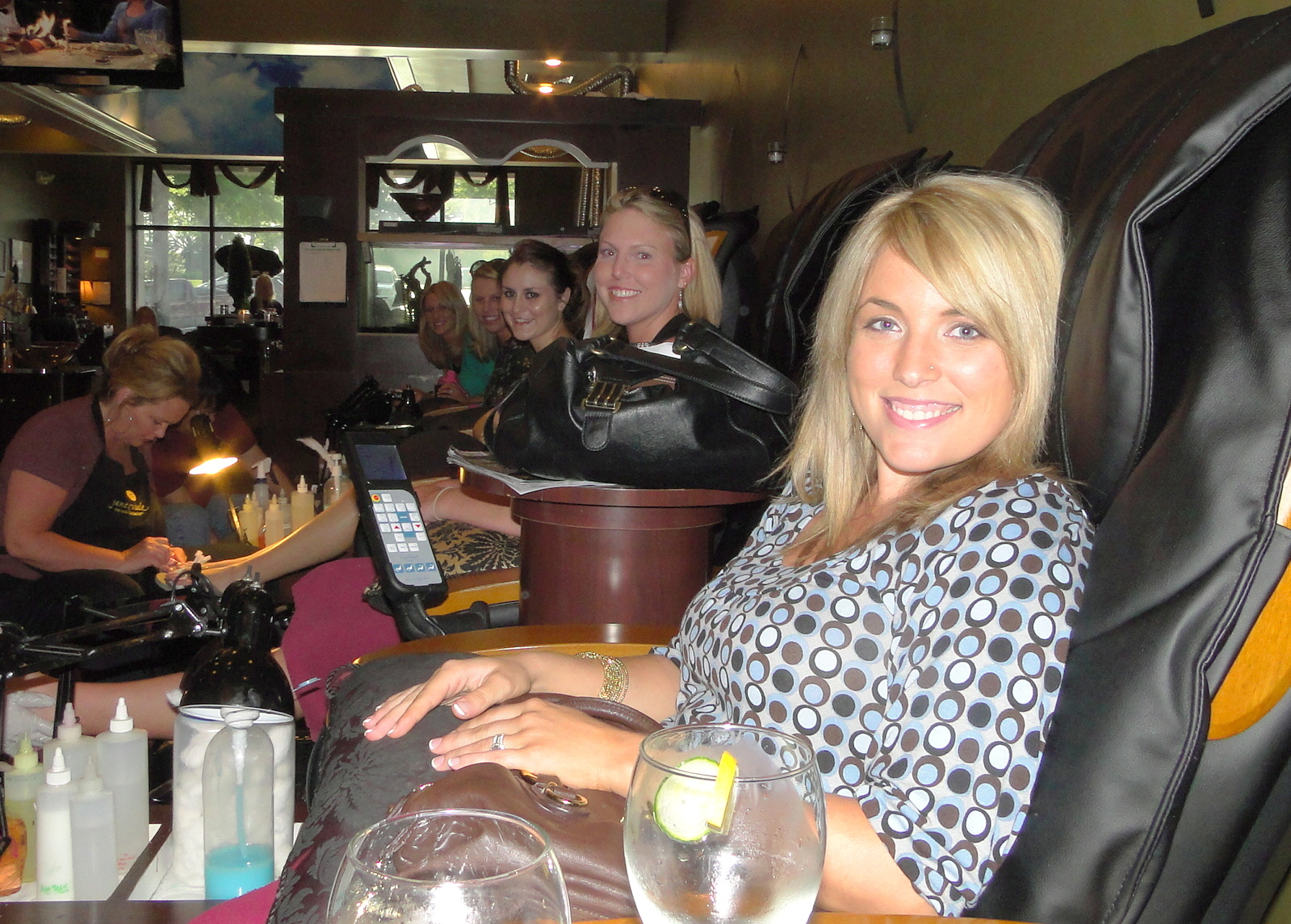 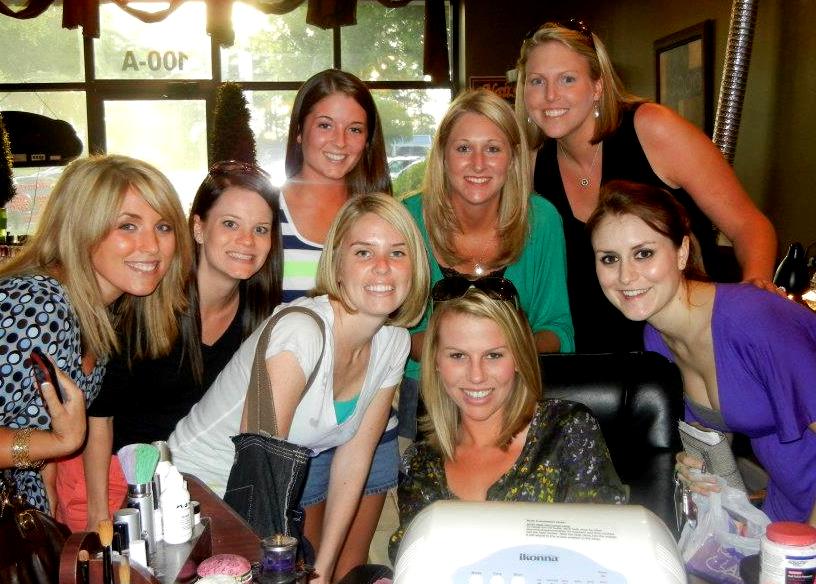 I LOVE getting my nails and toes done. I have never had fake nails in my life. I know, it’s probably surprising to many of you. But fake nails ruin your nails and I have never thought it’s worth going through that. I was pretty pumped to try out the new gel thing everyone is doing. It looks like fake nails but it’s not and it lasts a ton longer than regular polish. Um. NEVER AGAIN. It did last a long time and I loved it (Even Zach said my nails were “sexy” which I don’t really get but I’ll take it!). Then when it was time to get it off it was impossible. I soaked them in straight nail polish remover and nothing happened. I went up to Nails By Chris and talked to Chris and he said you either have to soak them for 30 minutes in straight acetone or just peel them off yourself. So I peeled them. It was painful and my poor nails were ruined. A bunch of them broke way down and they felt brittle and thin. While I had my nails done I had been hinting hardcore at Zach about what a great gift it would be but after peeling them off I told him to forget any hints I had dropped 😉

After the nail place the girls all went to Casey and Jordan’s apartment (Jordan was living there at the time while Casey was still living with her parents but for that night Jordan and his guys got a hotel room so the girls could crash there) to get ready for dinner. I was already ready so I filled up with gas for the trip down to the wedding then met them there. We went out to eat at Blue Cafe in downtown Valdosta. I drove several of the girls and they commented on how cute our downtown was and how Valdosta was bigger than they expected. So all of you Atlantians…come on down!!! Seriously Blue Cafe was SO YUMMY. I want Zach and I to have a date night there pronto. We didn’t have the greatest service (the girl straight up forgot to put in my order so I was chowing down while everyone else was finished) but the food was well worth it…and cheap!!!

When dinner finished up I headed home. By then it was after 10 and I still had a LOT of packing to do to get ready for the big weekend! Here’s a group pic before dinner! 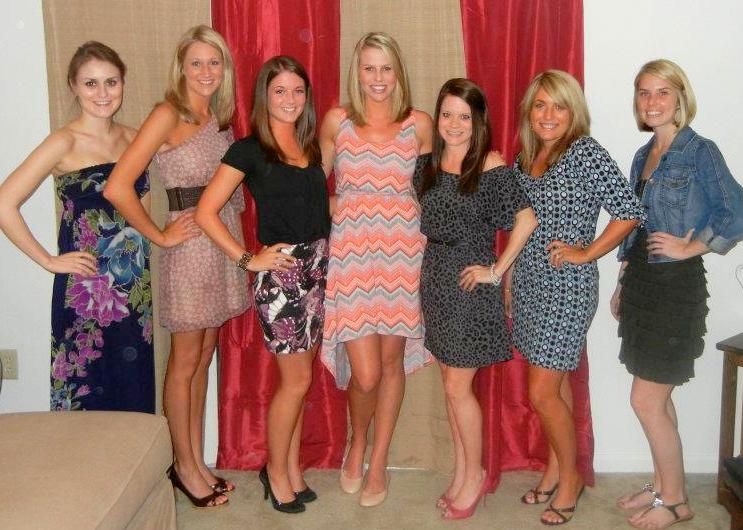 Friday morning we all met up downtown again but this time for the Bridal Brunch. We ate at Jesse’s Eats and Treats. I’ve never eaten there but it was adorable. The perfect setting for such an event!!! Casey got individual pics with each of us but I’m only putting my family’s ones up here! I think she got some with the grandmother’s too but I didn’t have them on my camera so I’ll add ’em once Casey posts hers! 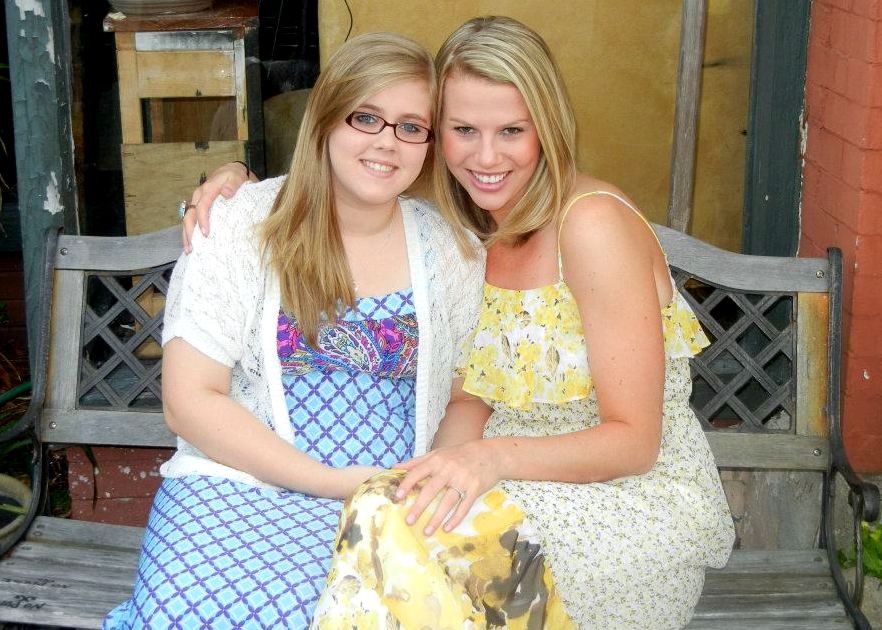 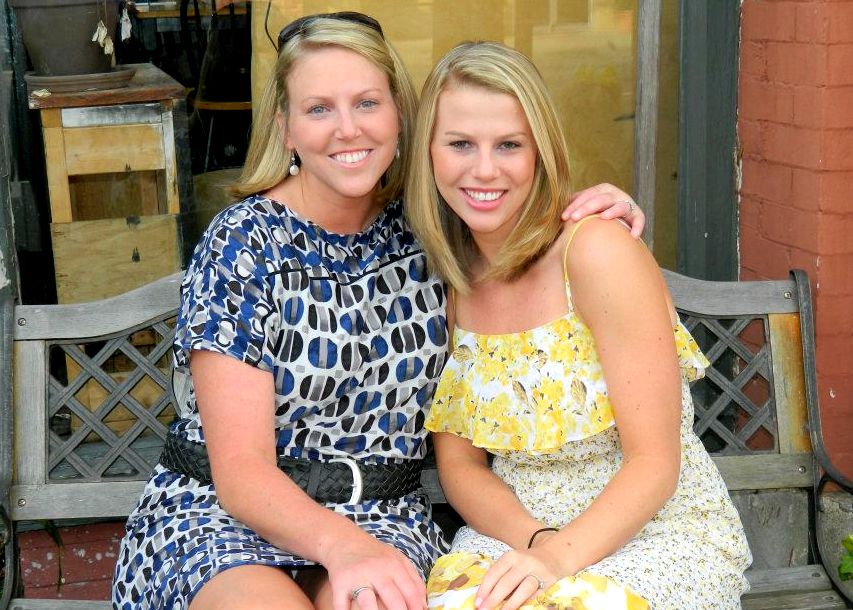 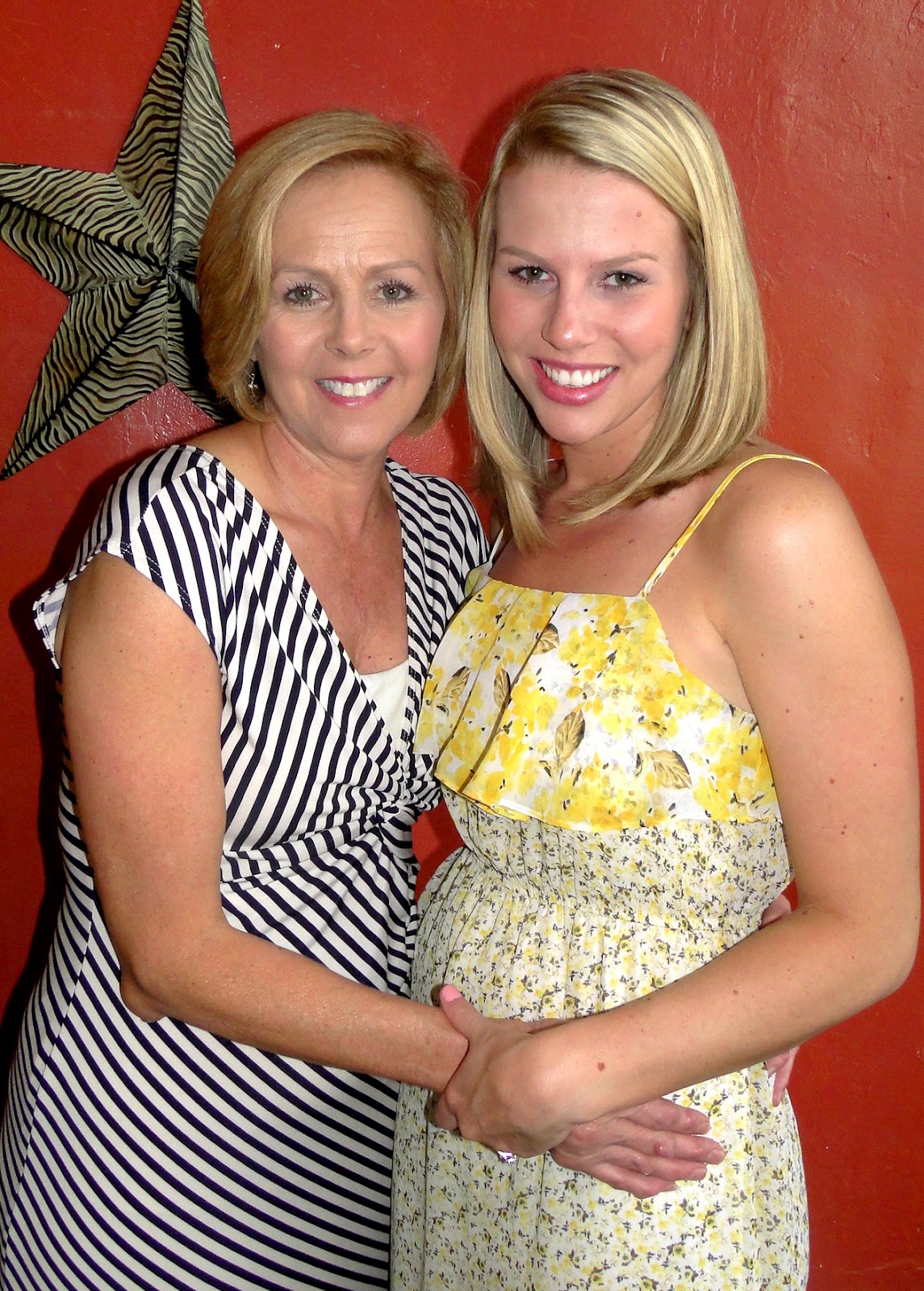 Payton was pretending to sleep haha 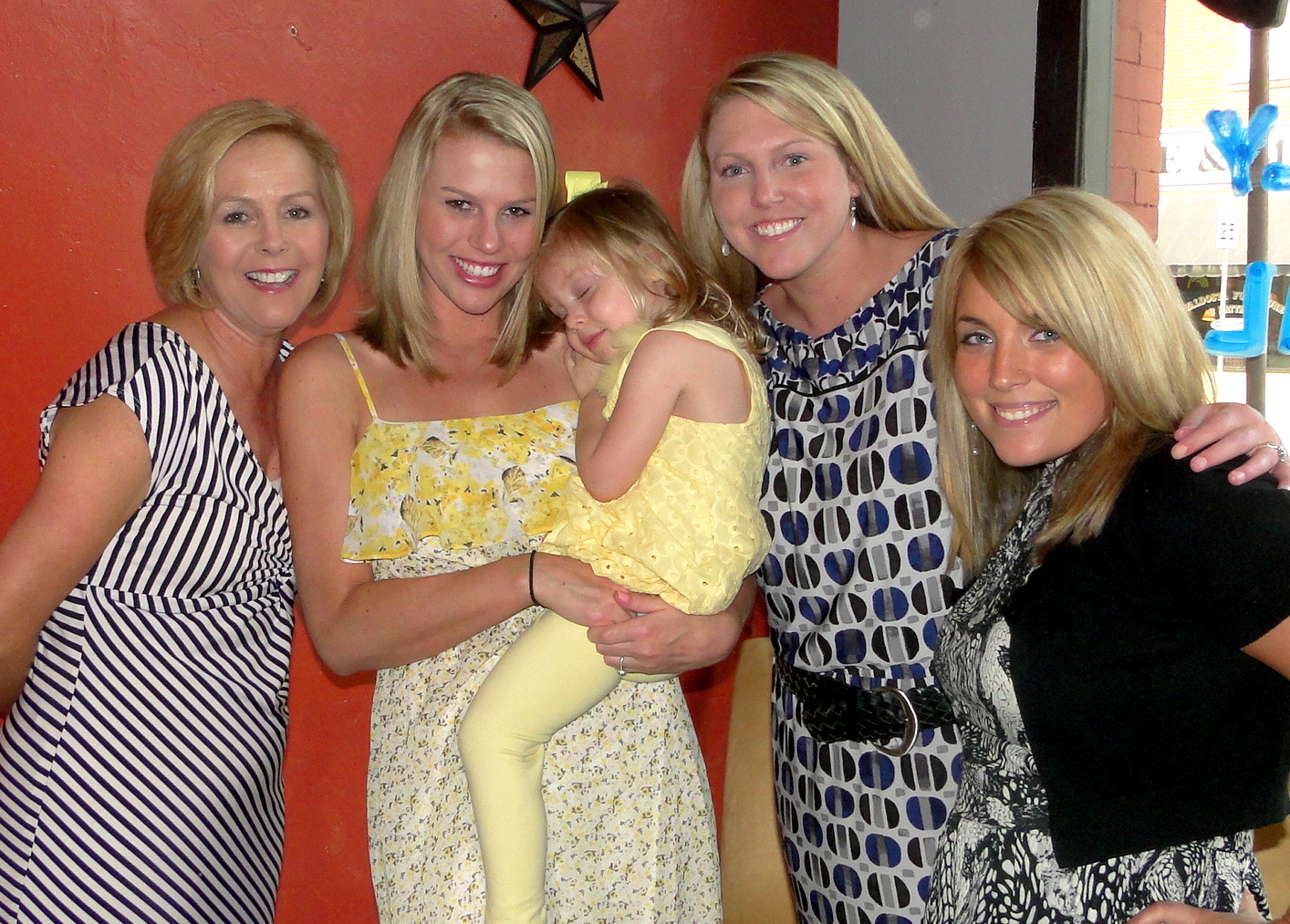 Me with the BRIDE!!! 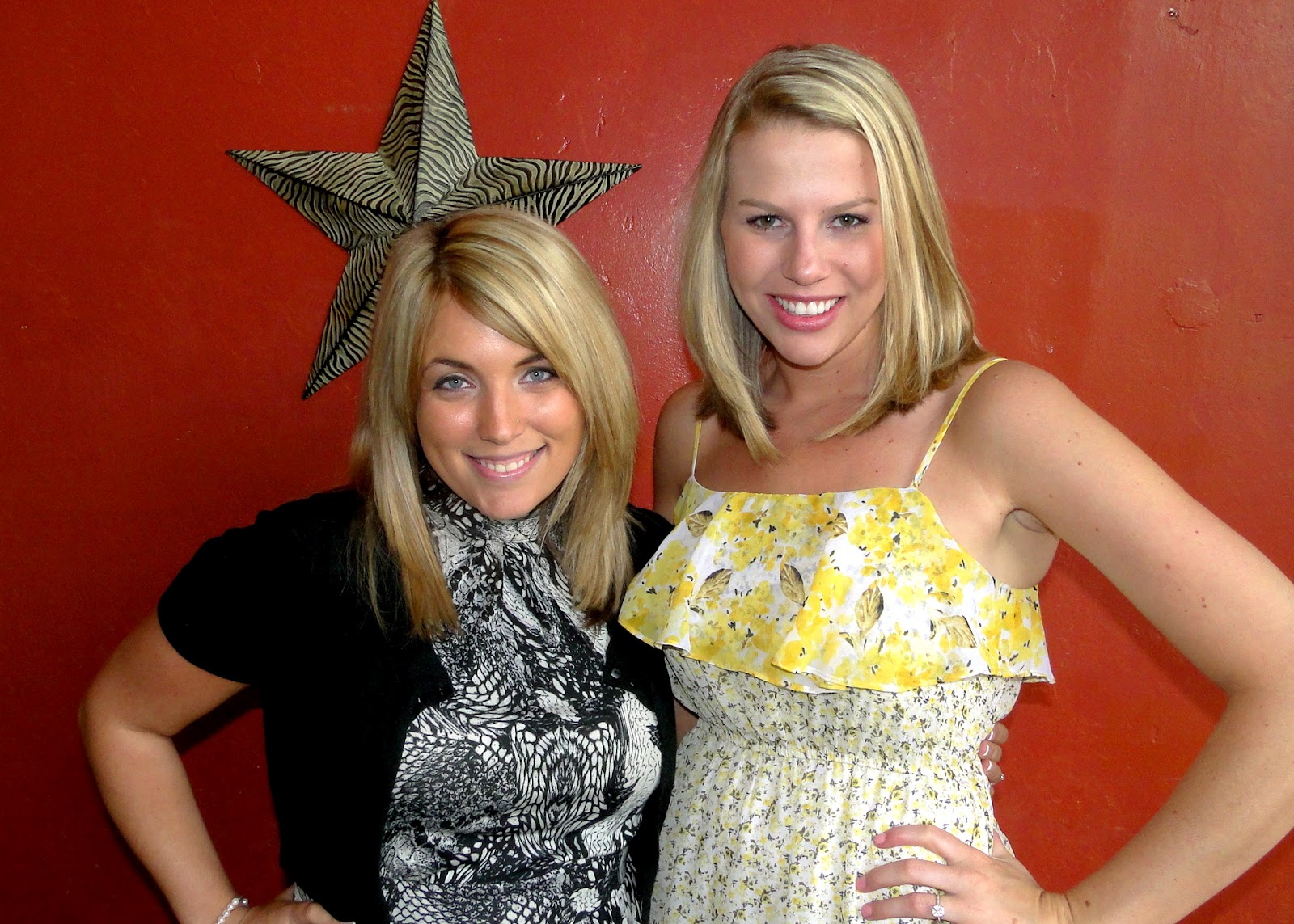 It was a really nice morning and Casey handed out gifts to each of us. The card she wrote me was so sweet that I carried it around in my purse for a couple weeks. I re-read it like 1,000 times. I know, I’m lame. But kind words mean a lot to me and I’m so thankful for the relationship Casey and I now have. It was wonderful to know that she’s thankful for it too and that my marriage and my parenting have made an impact on her 🙂 For the gifts she gave us these cute little personalized totes (which is perfect for carrying my breast pump supplies. I know that’s not what it was intended for but, hey, it works!), bracelets to wear during the wedding (again, none of ours matched – Casey is very eclectic with her style!), and robes to wear while were getting ready the morning of the wedding! She also gave Britt an adorable bracelet to wear in the wedding (which in the rush it somehow fell out onto the floor in our room so she ended up not wearing it the day of…but has worn it a lot sense and it’s precious!).