I really, really enjoy holiday shopping. I typically shop for Christmas ALL year round. You really do find the best deals that way (but you also ending up finding too many good deals and over-spending)! Zach and I both think it’s important for Kye to pick out some gifts of his own each year so he can understand what it means to give instead of just receiving. I also think it’s critical since he’s a boy as guys need help in the gift giving department (am I right or am I right???)!

This year I took Kye to Target, stuck him in the men’s section and let him go. I told him to pick out a gift for Daddy and the first thing he ran to was a pair of women’s boots. It took me awhile to get him away from the boots and I had to steer him a little bit better into the men’s section across the aisle! 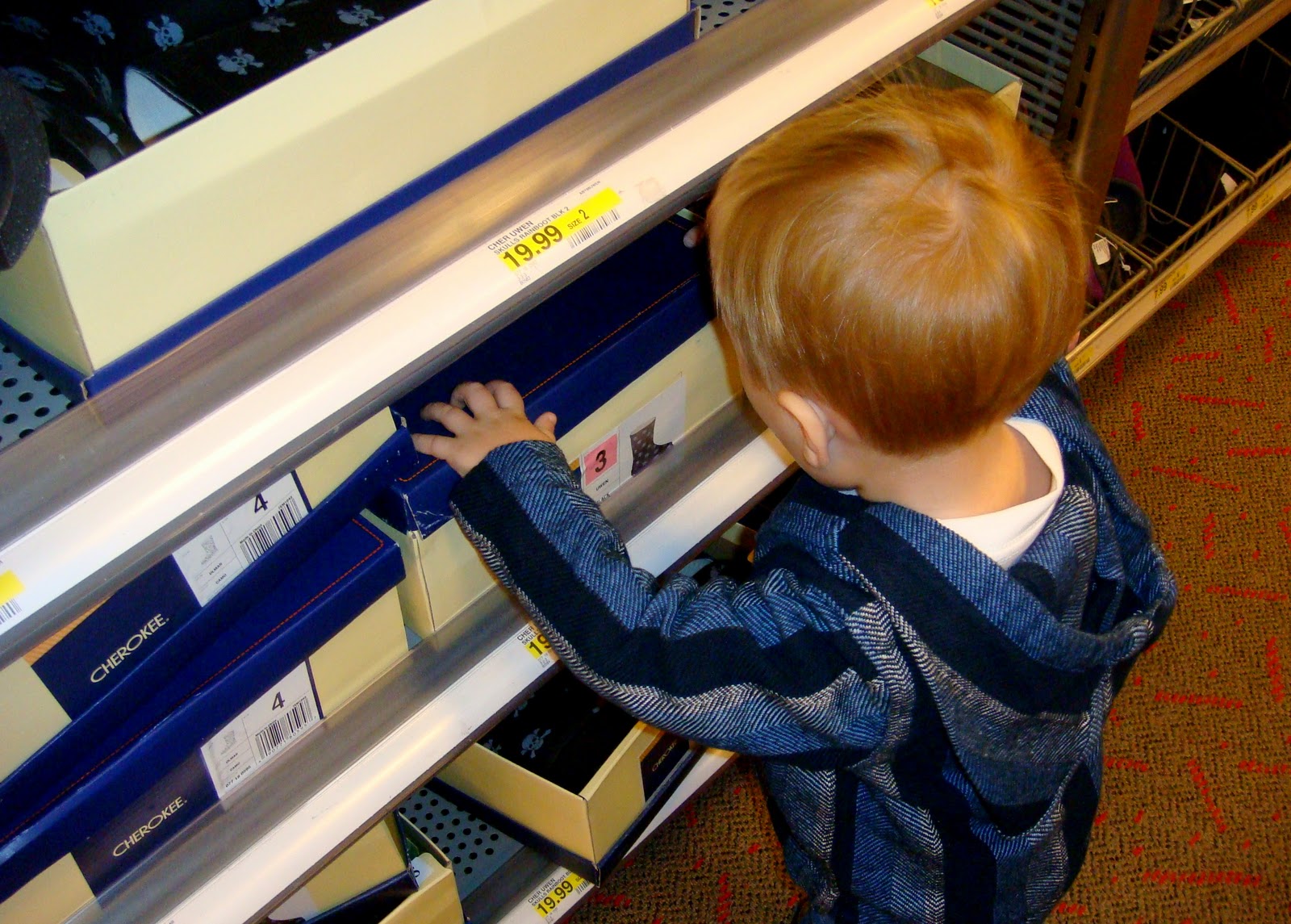 He looked at the shirts again and again and I was hoping he’d go that route as they were rather humorous, Zach could legitimately use it (at least around the house), and they were cheap! 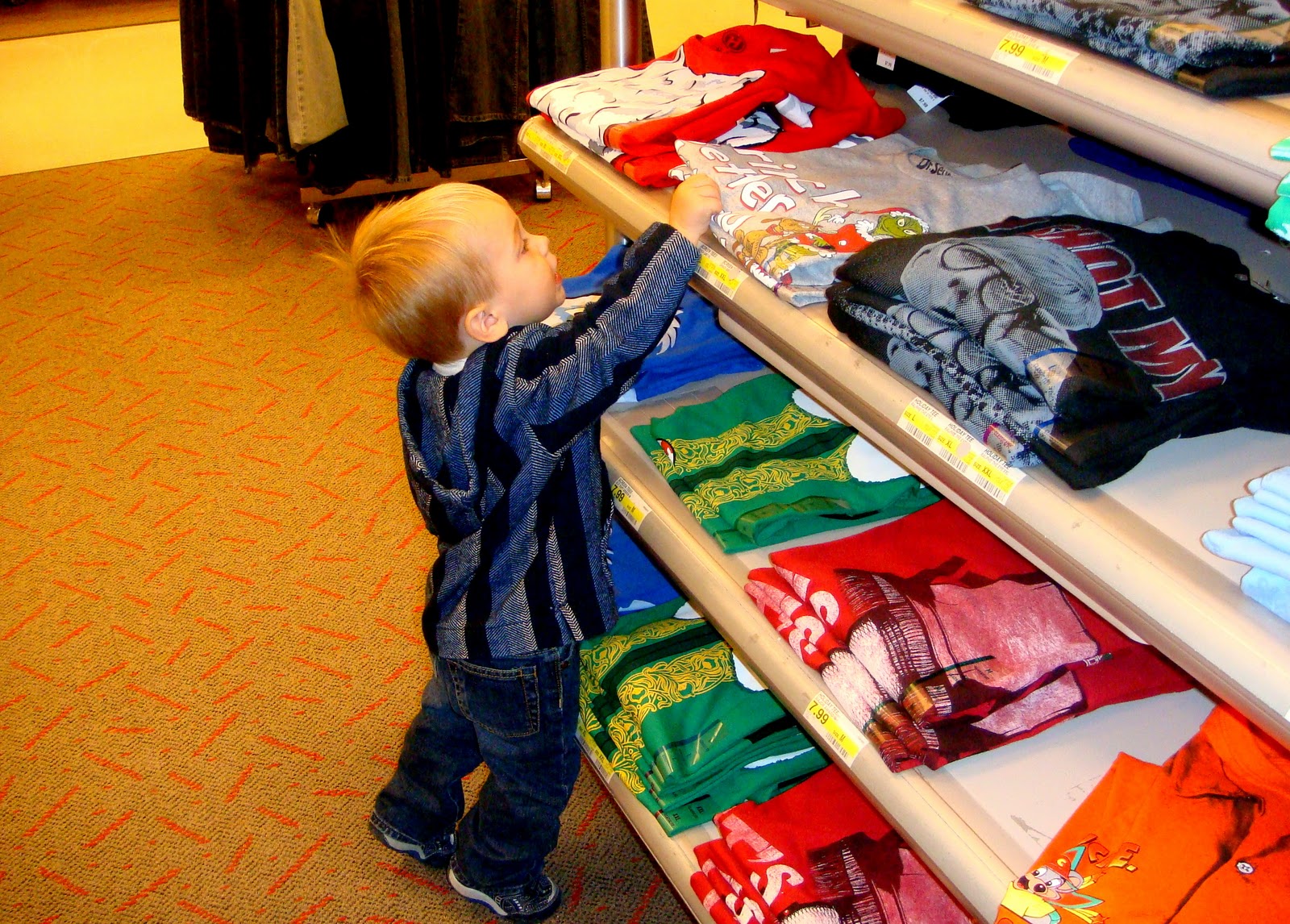 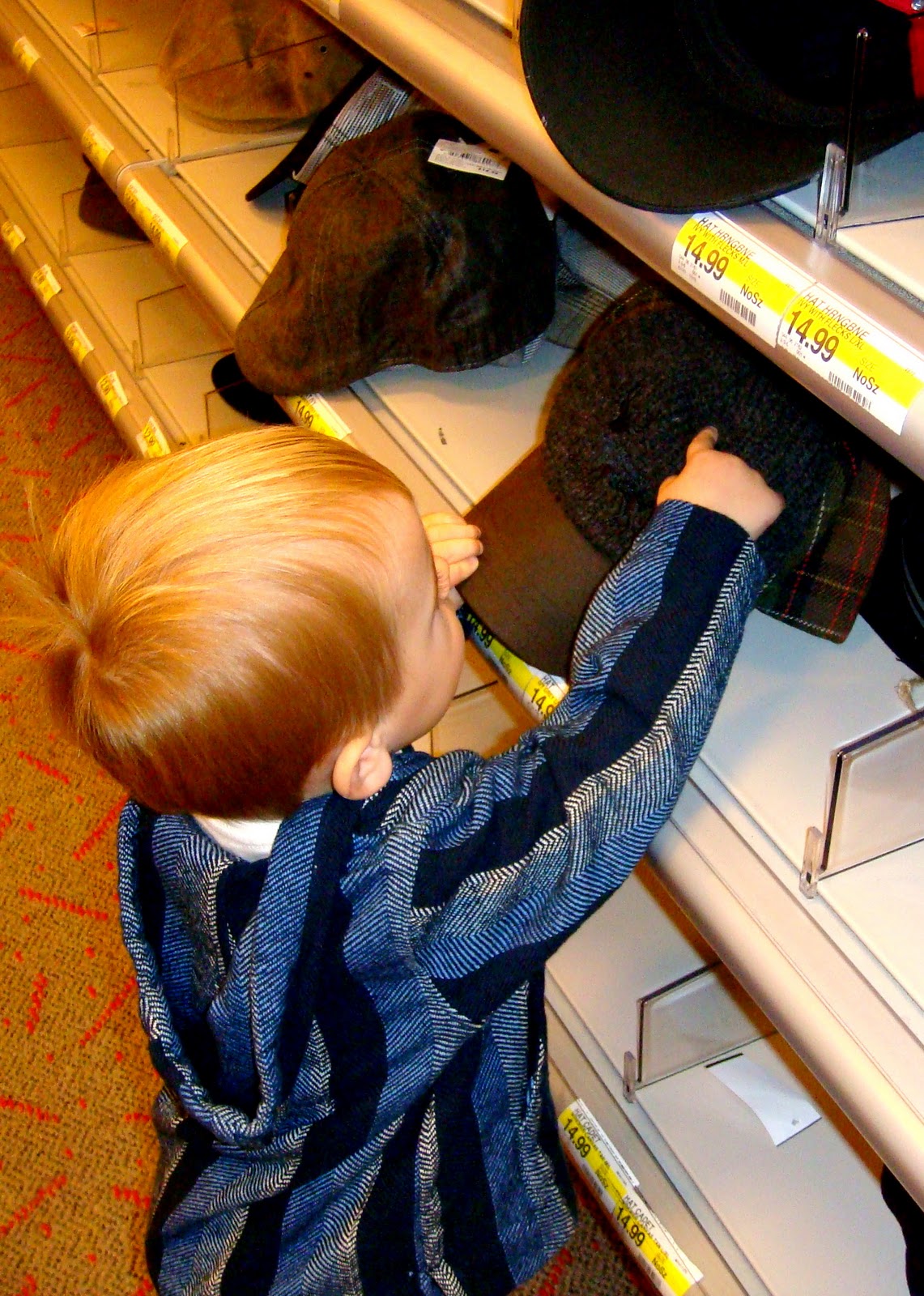 He went straight for this hat and never looked back. I kept reminding him that it was for Daddy and he would point at it and say “Daddy.” So I think he semi got it. But he also kept saying “Kye” and refused to take it off so maybe he also thought he’d get to keep it. 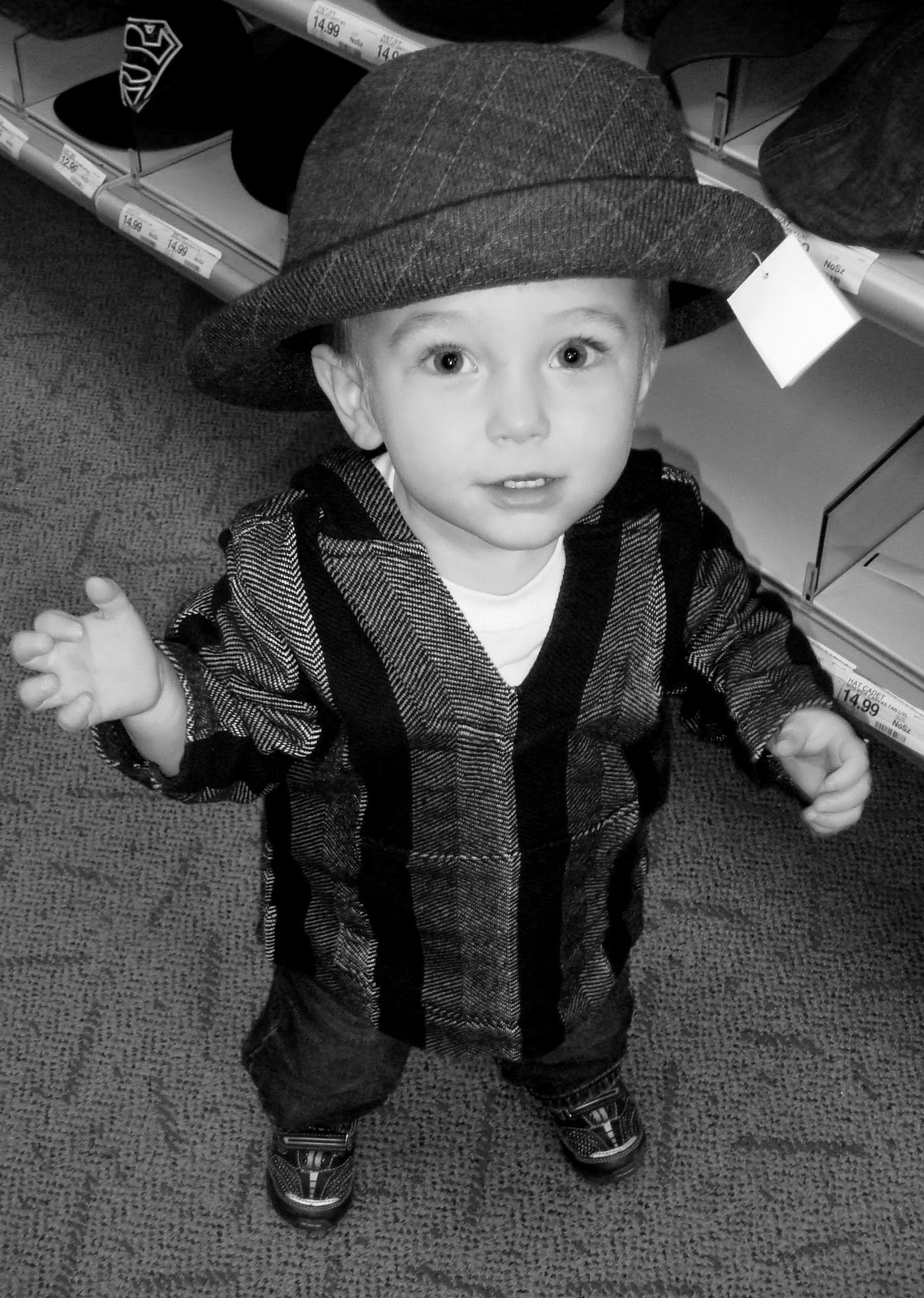 I hope his daddy looks half as cute in it 😉 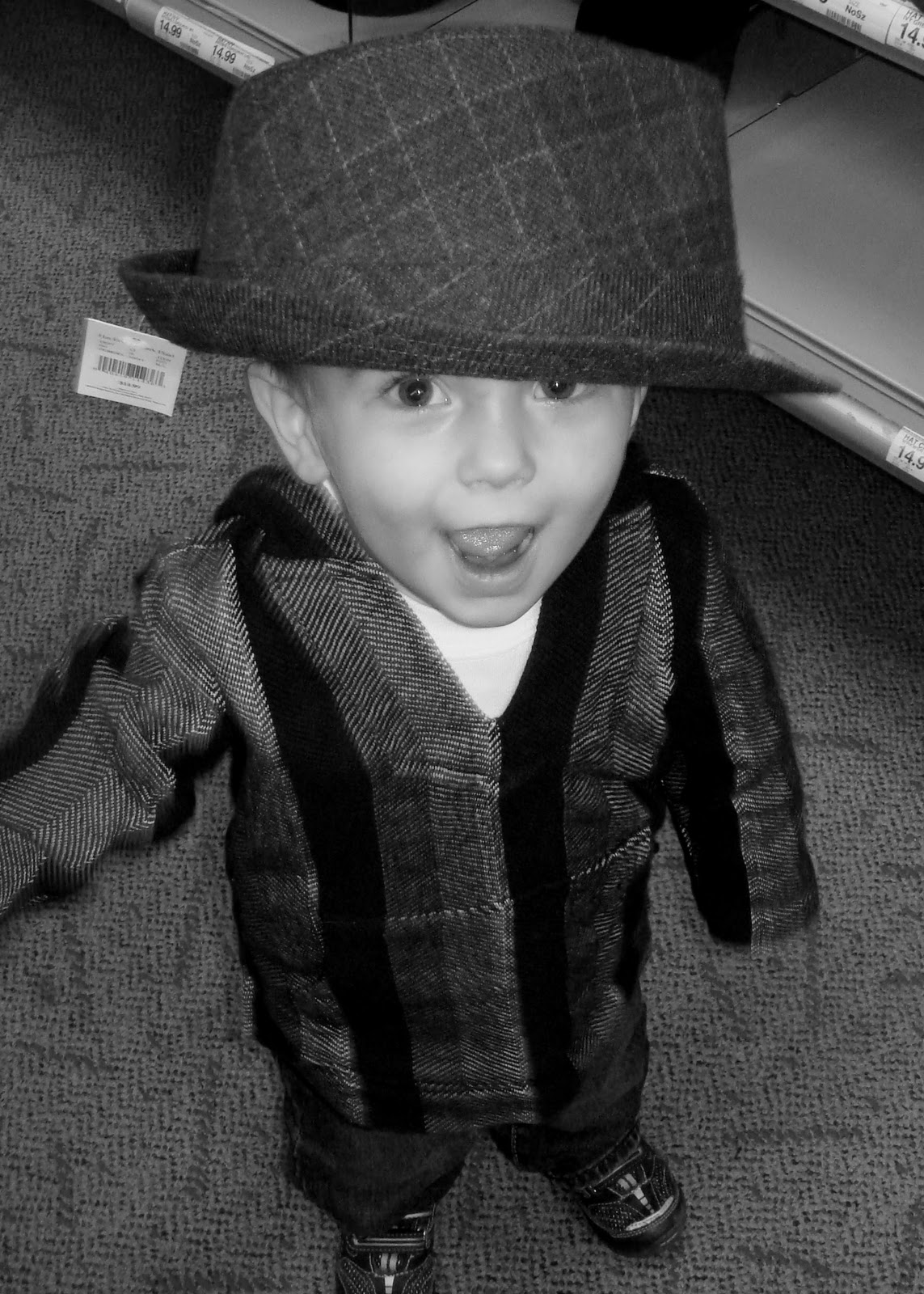 he was unwilling to remove it from his head 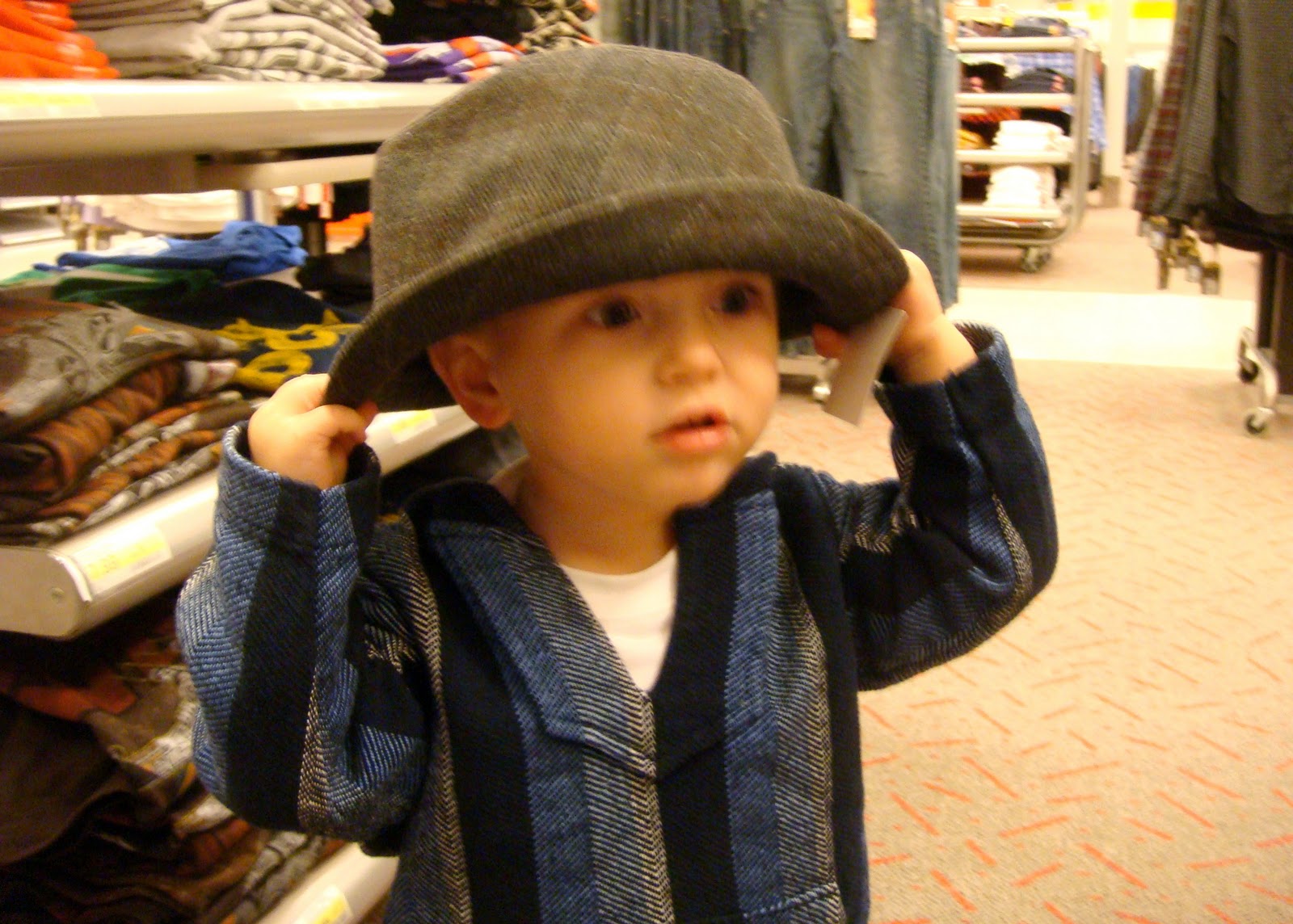 Soon the game went from finding a hat for Daddy to trying on several hats. Kye never would take off the one he picked for Daddy but he had fun telling me to try some on. It’s a sad, sad world we live in when a rather petite girl can’t wear any of the mens hats because her head is too big!!! 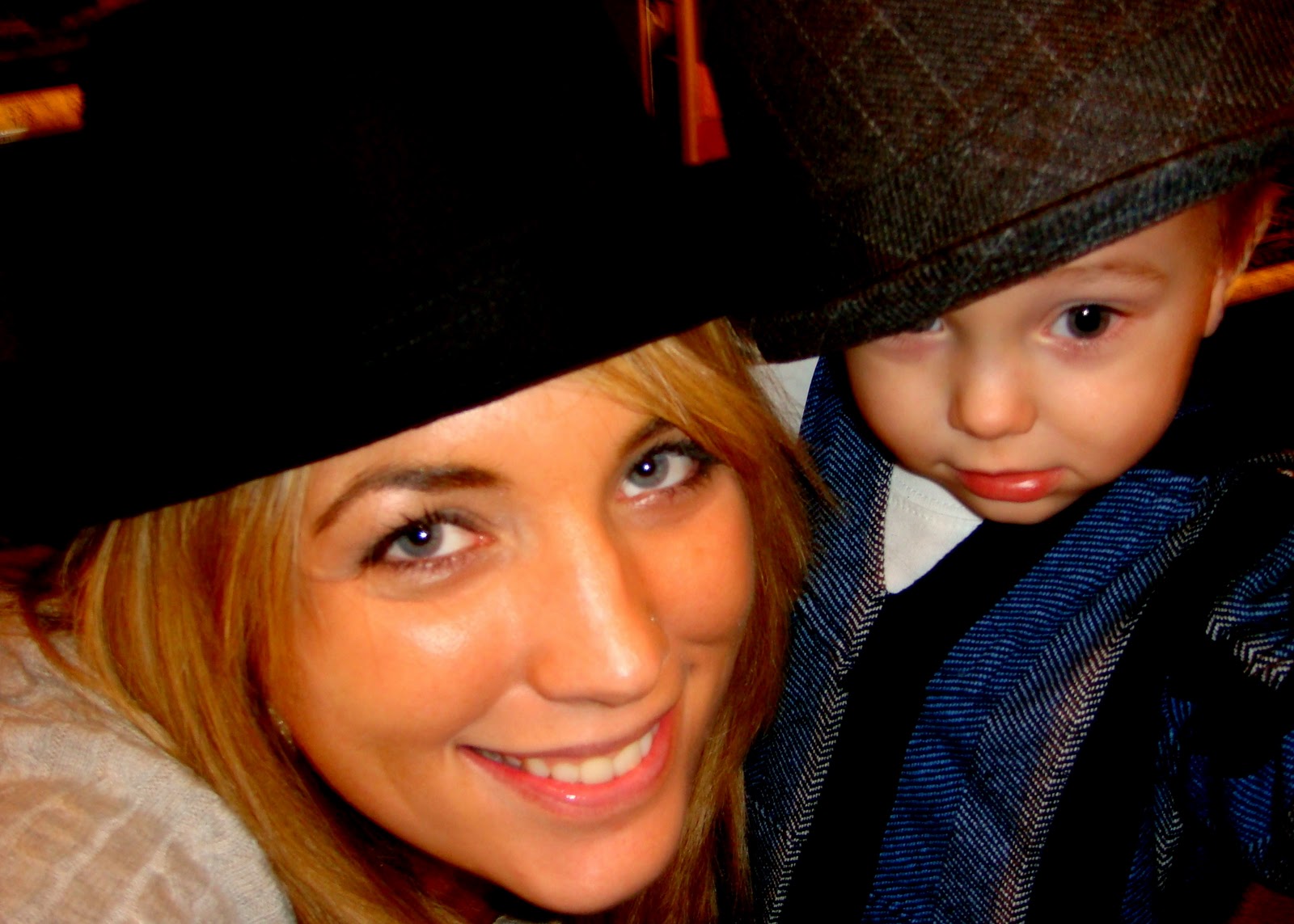 It may have been $14 but hey he picked it out himself and was excited about it so it was worth it! 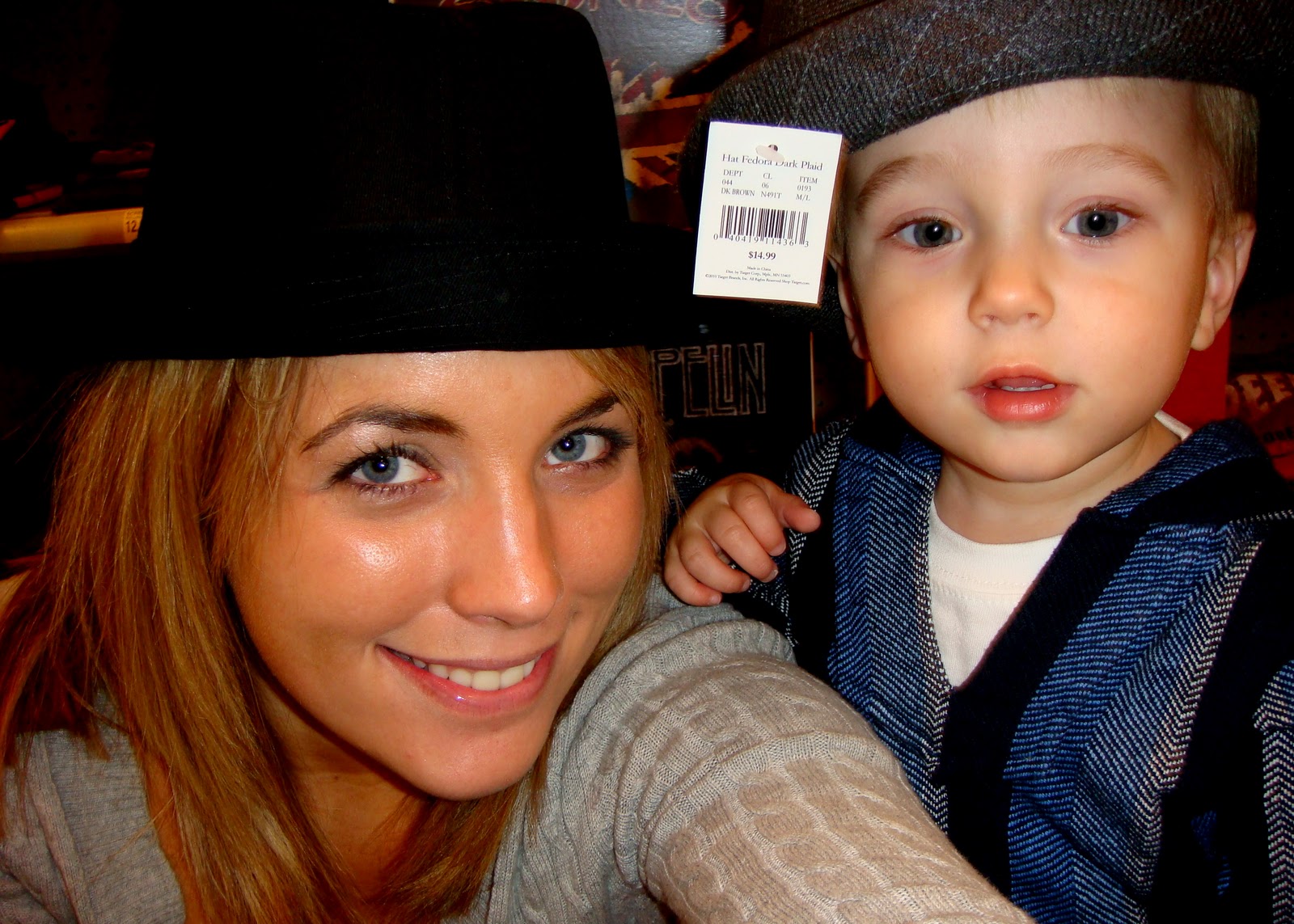 Once it came time to wrap the present I wanted Kye to take part in that too (again ladies…you know that men also need help in this department!). Of course pulling the hat back out only reminded Kye of how much he loved it and it made the wrapping situation tough! 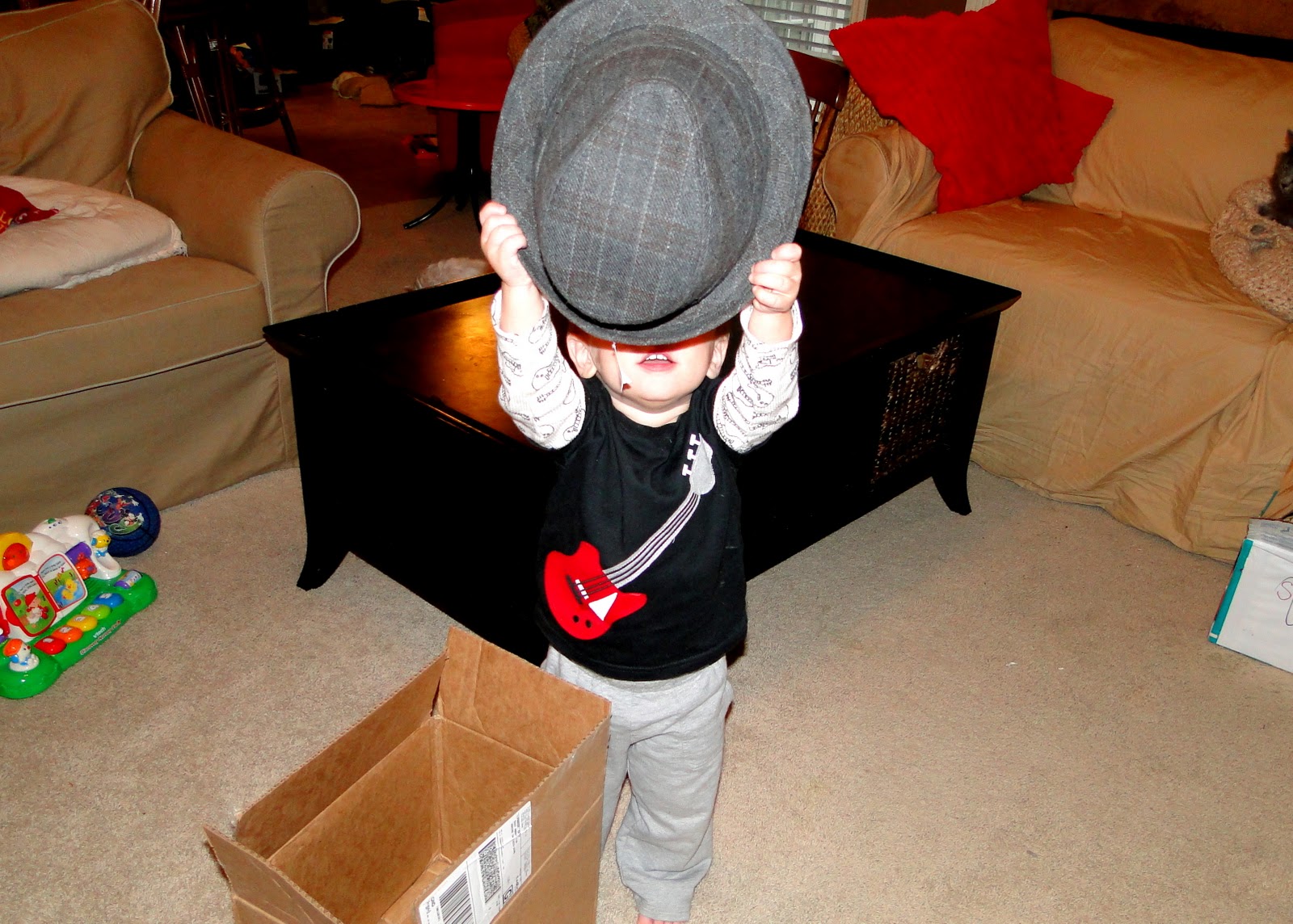 Here’s a video of me attempting to get Kye to hand me the hat so we could wrap it and a video of him helping wrap. He enjoyed putting the tape on the present…the more the better. I am about 90% sure that the hat will just sit in Zach’s closet and gather dust but it was a fun memory of picking it out and a nice little Christmas tradition! I’ve read blogs where people help their kids make gifts for all their family members each year and I like that idea. I don’t know if I’m crafty enough for it but we’ll see. More than likely we’ll just be hitting up Target but I do want to at least stop at the Dollar Store next year and have him pick out gifts for other family members like his grandparents and cousins 🙂 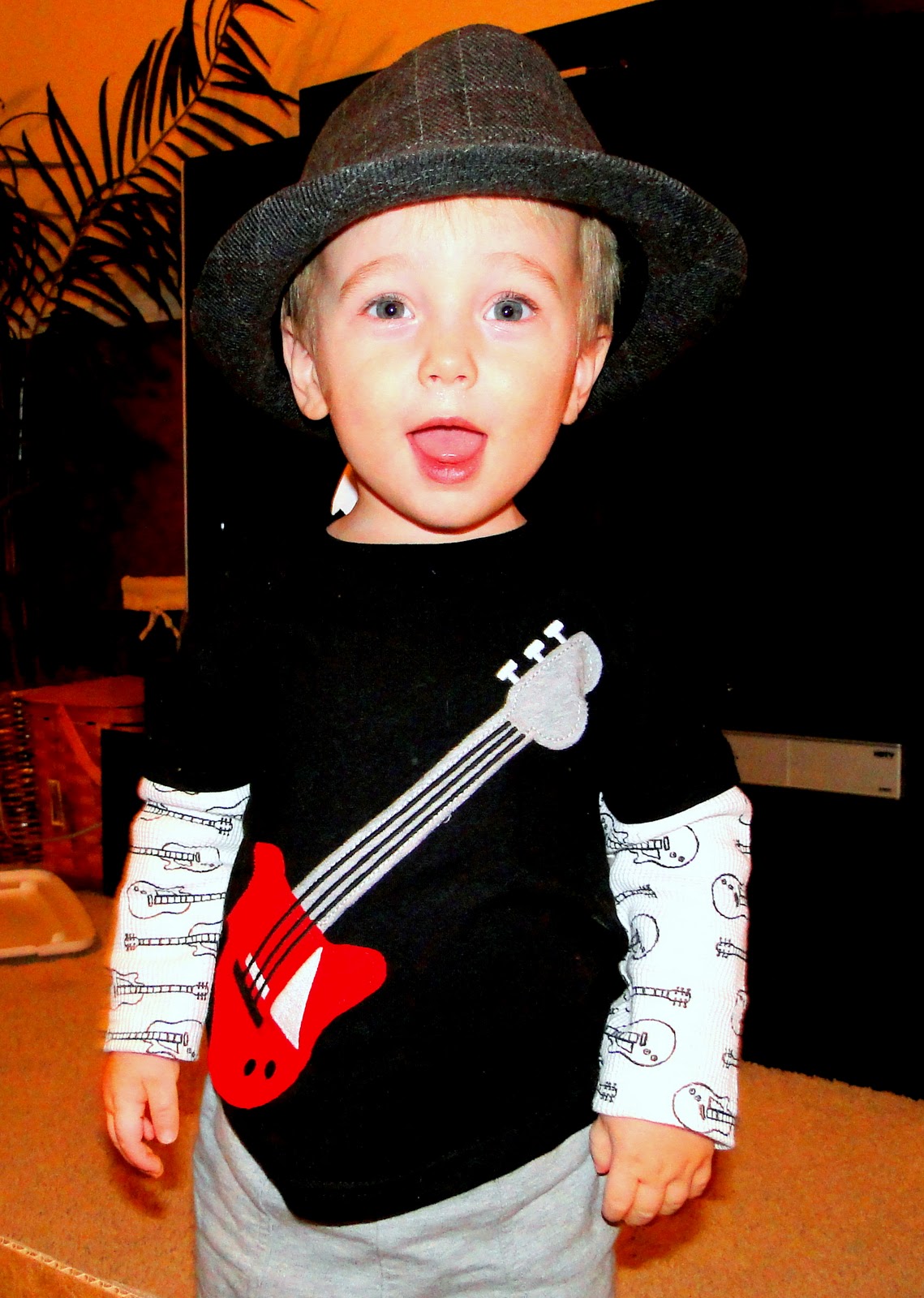