We thought we were sooo lucky with such an easy going baby! I knew eventually it would catch up with us! I was an AWFUL baby who cried constantly so I knew I had it coming to me!!!

Tuesday night was an awful night. I fed Kye at 10:00 and went to bed about 10:45 at 11:30 he woke up (has NEVER done that) and stayed up. All night. We tried changing him, rocking him, pacifying him, playing his sleep sheep…everything we could come up with and none of it worked. He seems like he was super uncomfortable, making tons of noises (like gurgling and fluid in chest sounds), and crying. Zach does not have quite the patience that I do so I told him to go to bed and that I’d stay up with the baby.

Trying to make him more comfortable with pillows haha 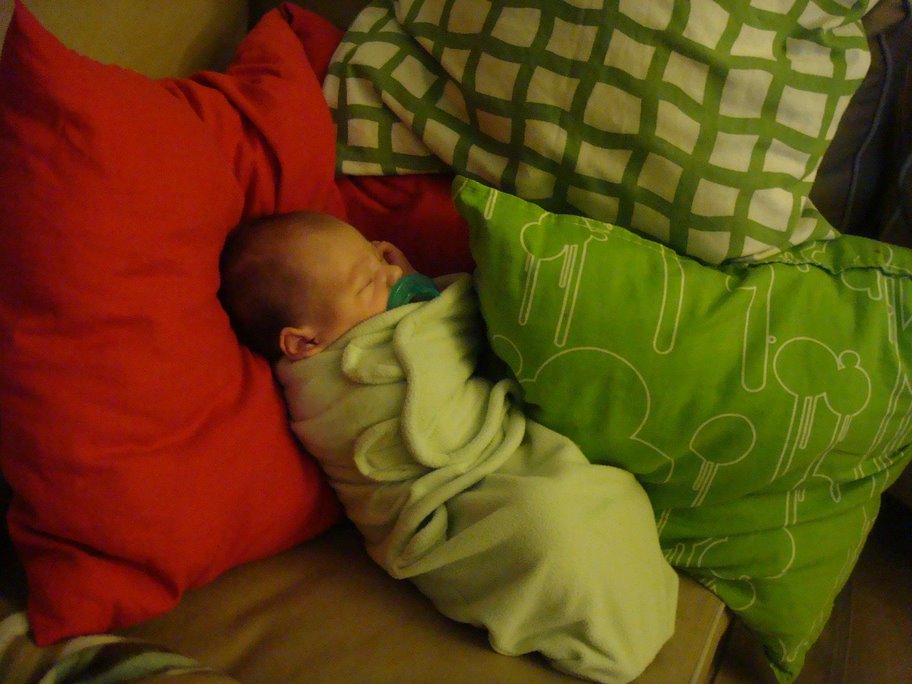 I broke down and nursed him at 12:15, hoping it would comfort him some. It didn’t. Finally at 1:30 I tried to put him in his swing…and BAM he was out! He didn’t wake up until 5:00 and then couldn’t go back to sleep afterward. While he was up and Zach was holding him I did my googling and my searching through the 5 parenting books I’ve somehow come to own. No luck with the books b/c I all knew were symptoms. But the internet helped. Everything sounded like he had baby reflux. Unfortunately, we’d already been trying everything it said to do! We have been holding him upright for 30 min after his feedings, giving him a paci, and elevating his head in his bassinet. Nothing was working! The worst part to me wasn’t my lack of sleep, it was that Kye seemed like he was not just uncomfortable but in pain.

The swing = My Savior 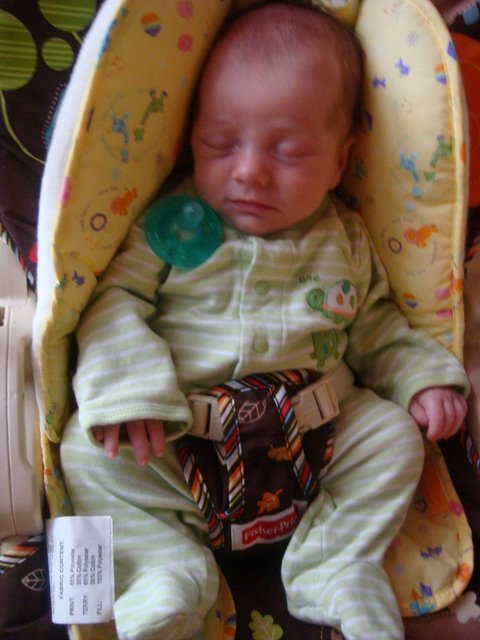 We broke down and Zach called the dr. and surprisingly they told us to come in. I thought maybe we were just overly worried parents but the fact that after telling them the symptoms they said for us to come in that day made me feel better.

Of course he FINALLY fell asleep in the bassinet right before we left for the dr! 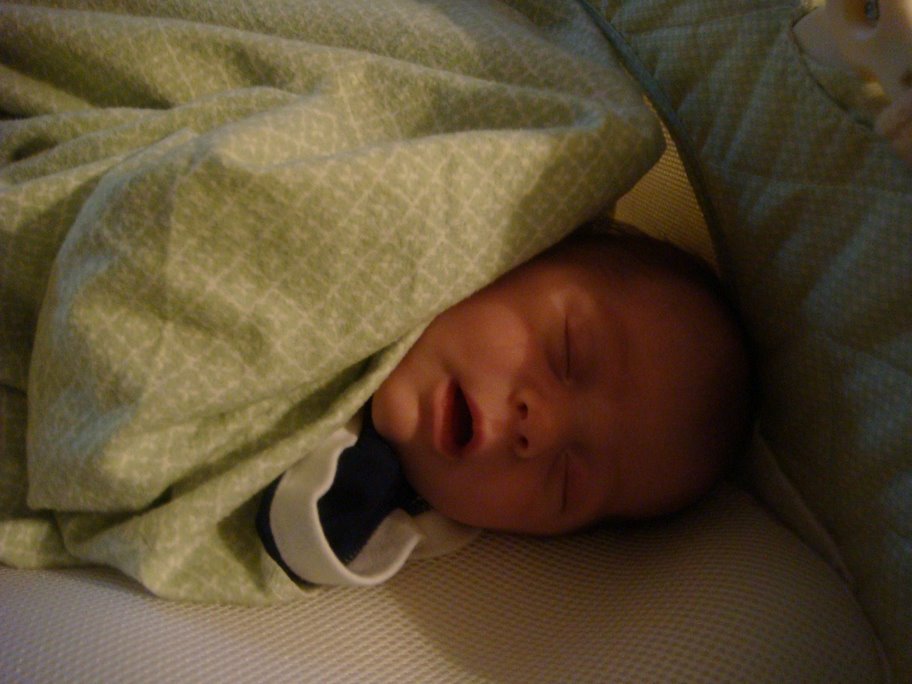 We got there at 1:30 and actually saw Dr. Griner! I take back the bad things I was thinking about him…he was a GREAT dr! He was quick, handled Kye very very nicely, and gave a very complete check-up. First though I have to note…I have a HUGE baby! He gained a POUND in ONE WEEK! He is now 10 lbs weighing in as much as Levi!

I really can’t believe the weight gain. He weighed 6lb 13 oz 3 days after he was born (so on the 7th) and less than a month later he’d gained over 3 lbs! Isn’t that insane? Most babies gain about a pound in the entire first month and only 1 1/2 to 2 lb each month in the following months! At this rate we’ll have a little porker! At least I know he’s getting enough to eat though right? And what else is strange is that he’s STILL in newborn clothes and some of those are still too big for him…and most newborn clothing ends at 8 lbs. Whatever!

He was a happy baby for the dr! He did show SOME of his symptoms but not the cranky part! 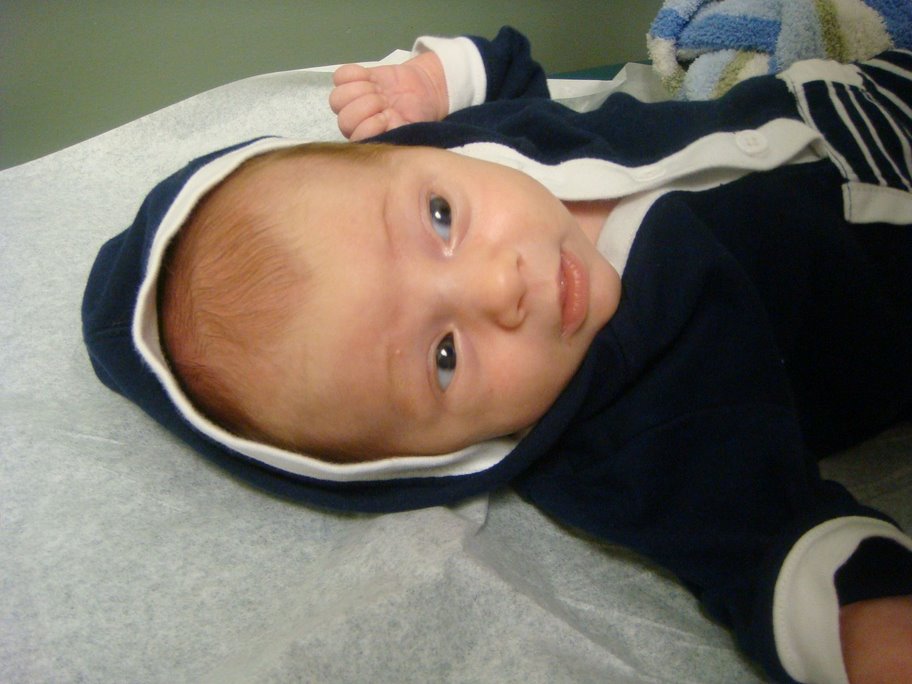 Anyway…Dr. Griner said even though he is healthy and thriving (thanks to the weight gain) he does have GERD which stands for gastroesophageal reflux disease. Basically it’s acid reflux which means the stuff in his stomach comes back up through the esophagus. Not fun for Kye, not fun for us. The dr. said to continue doing the preventative measures we’ve already been doing but to do them even more. From now until it’s gone we’ve said “goodbye” to a crib or bassinet! Kye will now be sleeping in his swing or in his car seat! We’ve also said “goodbye” to laying him down for very long periods of time at all. If we’re not holding him upright then he’s upright in his travel swing or bouncer.

He said that he also needs to stay vertical for 30 to 45 minutes after each feeding and that burping him will not really help or hurt the situation. Also he said the pacifier is a great help because the sucking reflex helps break up some of that acid (NO more guilt about the paci that’s for sure!).

He did say that since Kye’s symptoms are so bad that he has to be on an antibiotic. This really, reallly bothers me. I hate the idea of giving him something that 20 years from now they find out causes issues! He has to take 0.5 ML twice a day of Zantac. And he has to continue taking it at least until his May 11th appointment. FUN. AND it could take up to a week to start working! So until then he’ll still be in pain and we’ll still be pretty annoyed! 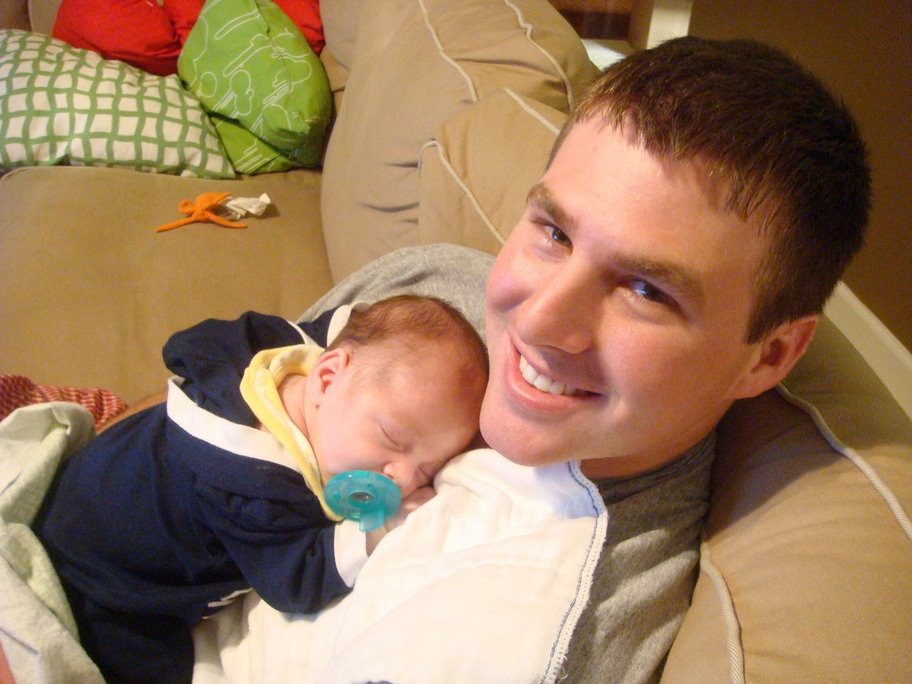 Luckily he was SO tired last night. So he slept really, really well. He actually only woke up once during the night to feed! We did give him the medicine before he went to sleep but some of it drolled out of his mouth. Then this morning we gave it to him again and he spit pretty much all of it up afterward. So I called the dr. again for some advice on how to keep it down! Am I turning into one of those “let me call the dr” moms or whhhhhat? But my kid DOES have an issue so I think I have legit reasons to call! Anyway they said that the medicine tastes bad and that may be why he’s spitting it up so that I can try to pump a little breast milk into a bottle and mix it with that so he’ll drink it down. We haven’t even introduced the bottle yet so I’m going to first try giving him the meds then his paci hoping he’ll be too busy sucking on that to spit it out. Then once we introduce the bottle in a couple days I’ll probably try expressing a little milk before each feeding to use in the bottle with the medication! We’ll see…

While I really hate that Kye has to be on medication already in his young life I am glad we found out the problem and that there is some help out there for him. When I was a fussy baby they labeled me with colic and gave my parents no help with what to do with me! I think they just suffered through with a miserable baby for months! Now they have found that most babies who they would usually label “colic” actually have reflux and that it’s very common. I’ll bet I had that as a baby and no one even knew it! Luckily, most babies grow out of it within the first year…only 3% of the population has it into adulthood! So we should be getting some sleep eventually 🙂