I have always pretty much regretted giving Kye the paci. I have a MEGA love/hate relationship with that thing for SURE! A few months ago Kye started to throw it out of his crib during his naps then cry to get me to come in his room and it drove me INSANE. I am a firm Babywise

believer and I agree with the book when it says that a pacifier is a sleep prop. Instead of 100% putting himself to sleep Kye must have the paci in order to go to sleep. As of right now I’d like to say that none of our other children will have pacis. However, I do see the argument for the paci since it’s “easier” to get rid of than the thumb or some other body part. It’s really such an internal battle for me! I don’t get why it bothers me so so much but it really does! 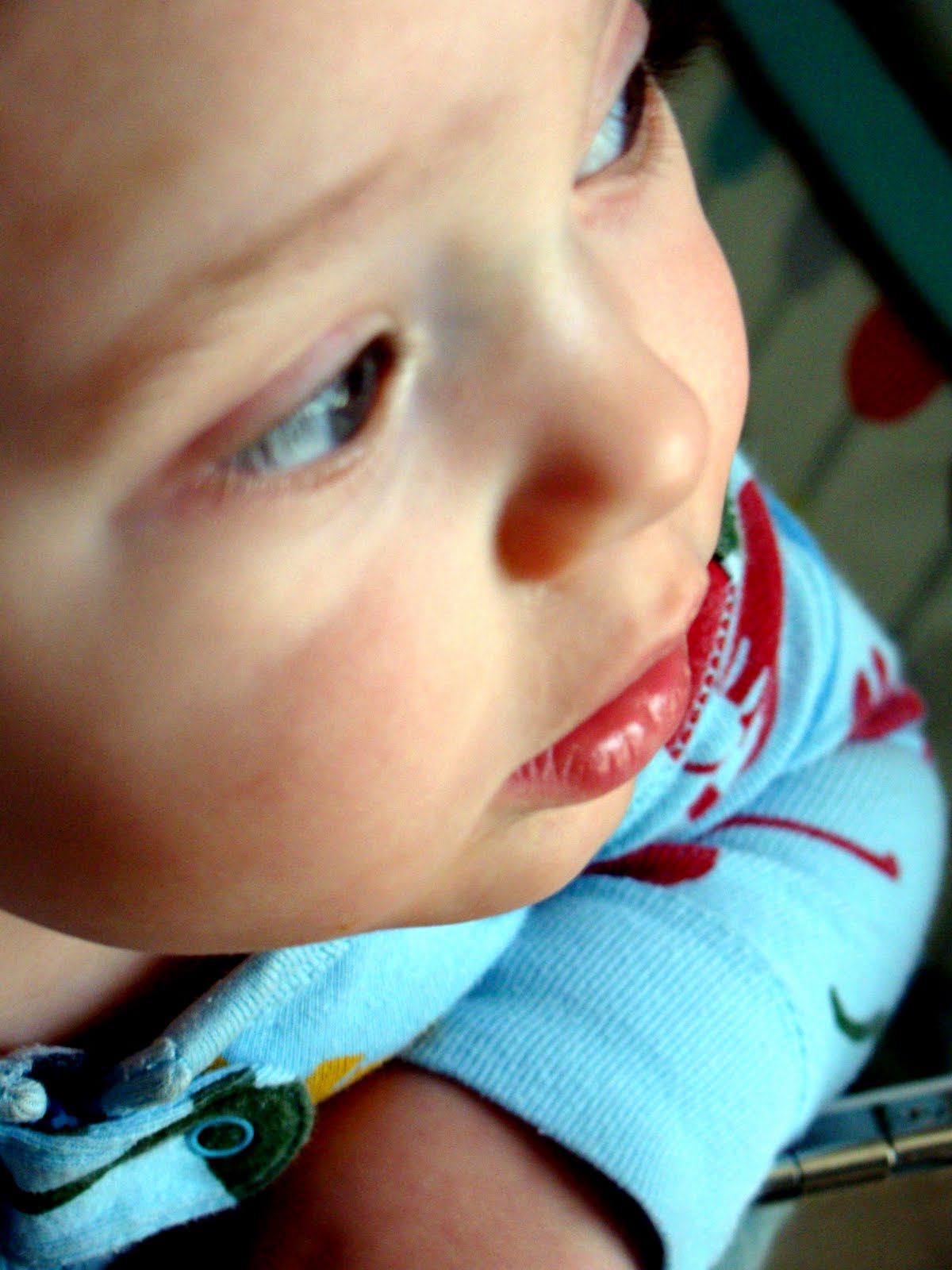 At Kye’s 1 year check-up I asked his pediatrician for advice on weaning him from the paci and she said that we should wait until he’s two. Right now he’s too young to be able to understand why we have taken it away and he’s too young to reason with or explain the situation to. That made sense to me. I also posted the question on a Babywise Message Board (thanks to Kelly for that find!!!) and all the Babywise mom’s said pretty much the same thing as the pediatrician! I was shocked at how many hardcore Babywise moms USE pacis!!! It made me feel less guilt about Kye having one and it made me accept the fact that we’re probably stuck with it for another year. 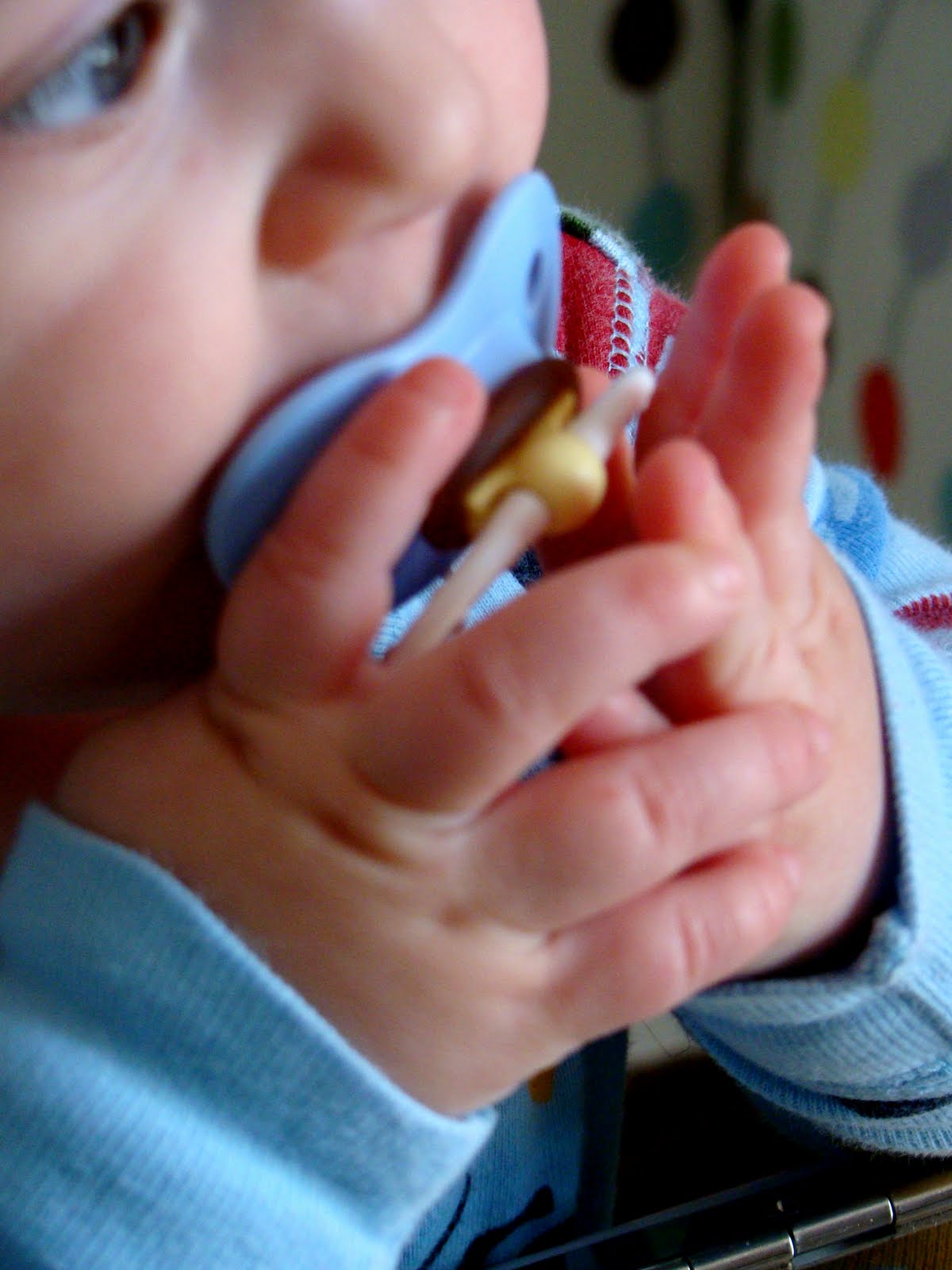 Both the pediatrician and the message board posters also agreed that Kye has been playing me for a fool with the whole throwing-the-paci-out-of-the-crib-thing. While he’s too young to really understand manipulation, he has figured out that if he throws the paci out of the crib then I will come in the room and so when he wants to see me, he tosses the paci! Both resources told me I needed to do something to stop him from doing that and the message boards recommended that I give him more than one paci in his crib and then if he throws them out I don’t go in the room.

We have started to give him two pacis. Now he has one in his mouth and an extra one in the crib. That has made a HUGE difference, even in his night sleep, as when one falls out he can easily find it or the other one. Great tip for sure! Instead of just not going in there when he throws the paci out, I instead spent several naps IN his room. Once he threw out the paci the first time I went in the room and sat on the floor and each time he went to throw it I’d prevent him from doing so and FIRMLY say “NO SIR paci stays IN the crib!” If he did manage to toss it I’d put it back in and continue to say “NO SIR” over and over very firmly. It took a couple naps but it’s worked beautifully! He no longer throws it out of the crib AT ALL!!! 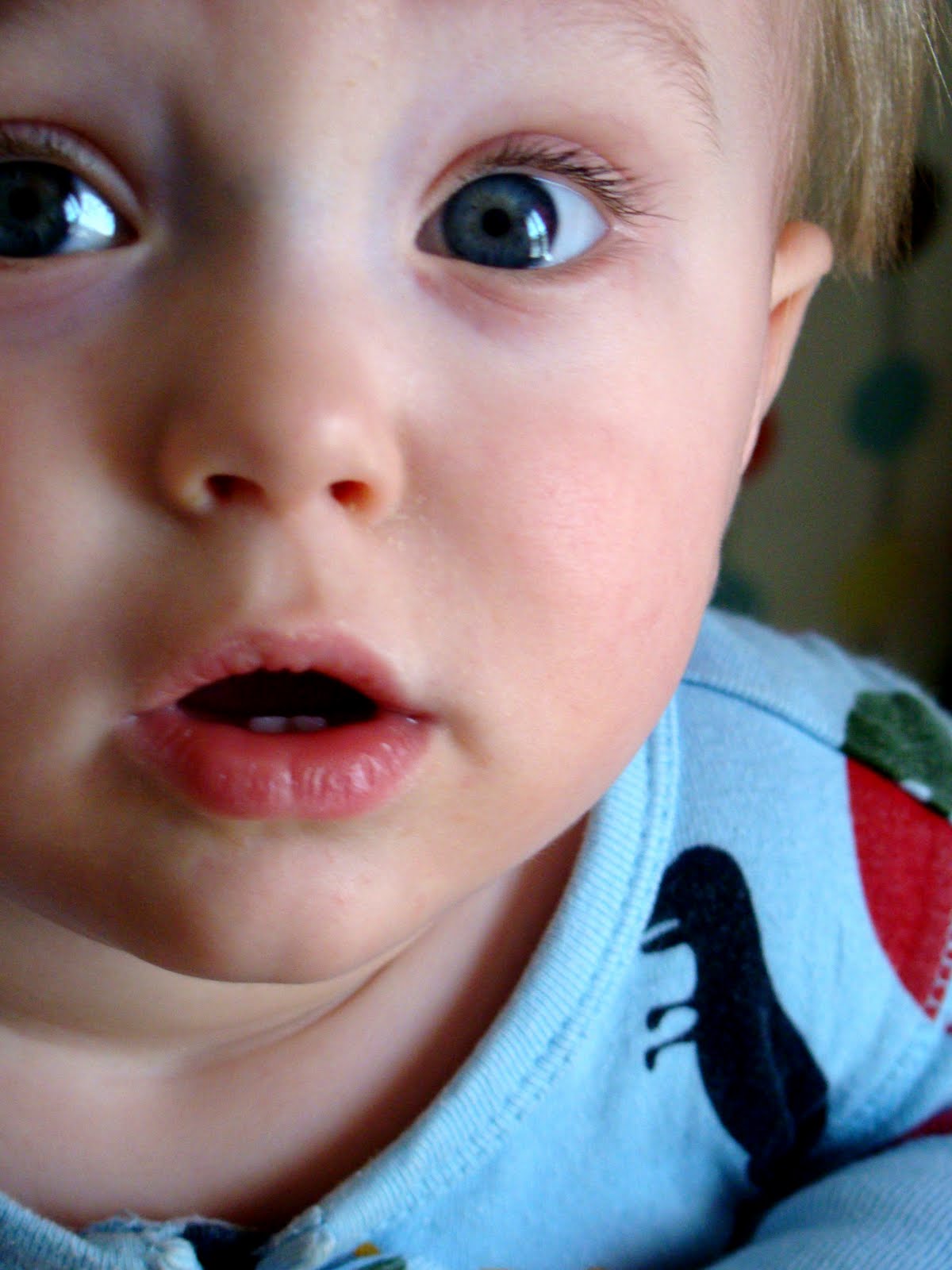 On top of all of those things we’ve also gotten more strict about the paci. We’ve never let him walk (well crawl) around with it in his mouth. We’ve never used it in church. He ONLY has it for naps, at night, and in the car if he’s napping in the car on a trip or something. He’s also had it in situations where it’s very important that he’s quiet (weddings and funerals only) as he’s so vocal that it’s impossible for him to hush! While we’ve always been consistently strict about the paci we HAVE let him have it outside the crib. We’d give it to him while getting him ready for bed and while we read him his story he’d have it. We’d also sometimes let him have it right after a nap during the diaper change situation.

Now he ONLY can have the paci INSIDE the crib. It doesn’t leave the crib AT ALL (other than the car as discussed earlier). When he gets up from his nap or from his night sleep we say “say bye-bye paci” or “leave the paci in the crib” and he knows to throw it out of his mouth into the crib. Here’s a video of his new trick! 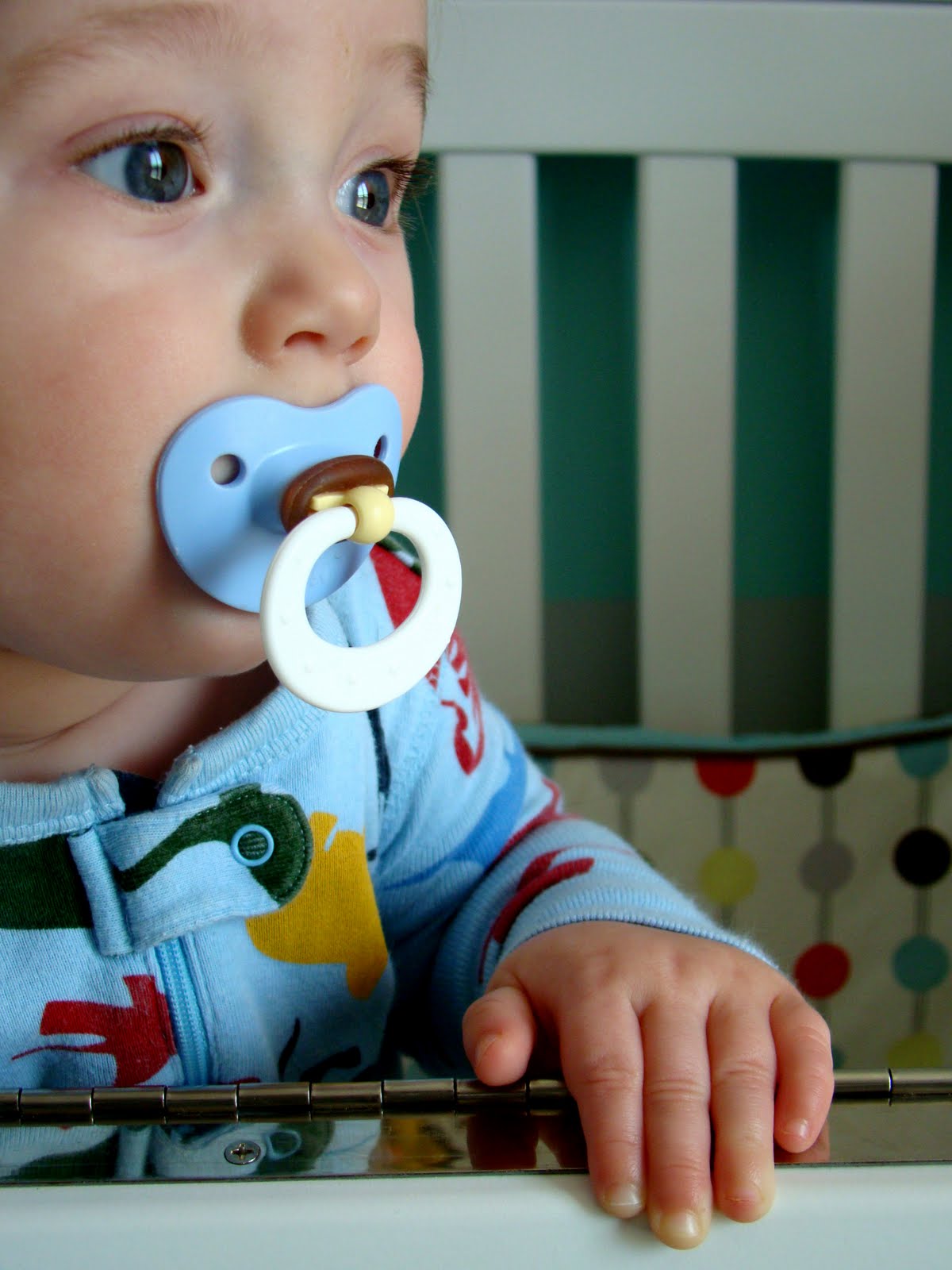 While he’s been sick and not feeling well he’s really wanted his paci. I DO allow him to get in his crib with the paci and monkey during his awake time if he needs that time. I WANT him to enjoy his crib and to think of his bed as his sanctuary and I think it’s healthy to choose to spend time in his bed without being forced to sleep in it. I know that Levi LOVES his crate and thinks of it as his little home so I think of the crib in a similar way for Kye. He will crawl over to the crib and whine to get in it so I’ll let him. Typically he just gets the paci and sits in there for about 5 min or so. I usually use this time to read him a story as he can’t escape me haha! 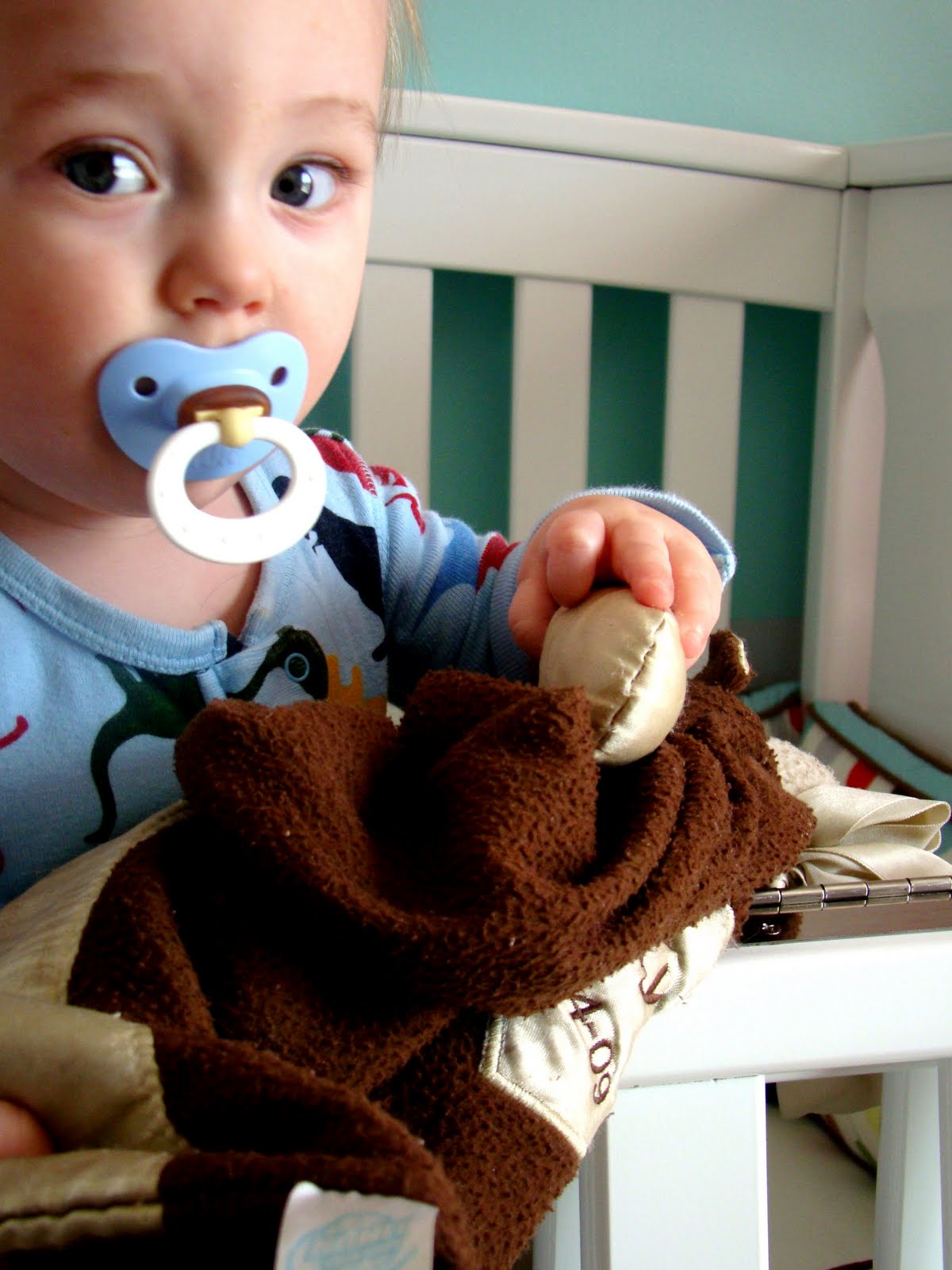 While I still would say I have a VERY love-hate relationship with the paci, I feel like I’m in a good place with it right now. It’s no longer causing ME any trouble and it’s still providing Kye with his needs and comfort. I do totally plan to say good-bye to that thing for good when he’s two (we’ll probably do the whole “lets donate them to a baby” thing) but for now me and the paci are getting along just fine 🙂