As I mentioned earlier, the week between the bachelorette party weekend and the wedding weekend we decided to spend at Big Canoe. I found a deal for a condo place for a week and it worked out so great as Zach had a bunch of places he needed to go work anyway up in that area! We liked it so much we may go again next year…but we WILL be bringing two cars. Since Zach had the car for work, Kye and I were just STUCK at the condo with nothing to do as everything in the area was too far to walk and too dangerous as we were up on a mountain!

In an effort to hurry things along so I can get caught up I’m lumping pretty much everything we did that week into one entry. Enjoy, it’s a LONG one!

Sunday morning (after spending some much needed one-on-one girl time with Danielle the night before) I drove back up to Big Canoe then the three of us headed over to the Dawsonville Outlets to do a little Christmas shopping. I used to live at that place and oh how I’ve missed it 🙂 We had a good time together but I didn’t get any Christmas shopping done (although Zach did spend some time in the Coach Factory Store…yay!).

I cannot believe what this little kid makes me do…yes, we went into the Croc store…and yes we bought 2 pairs for next summer…what is happening to me?!? 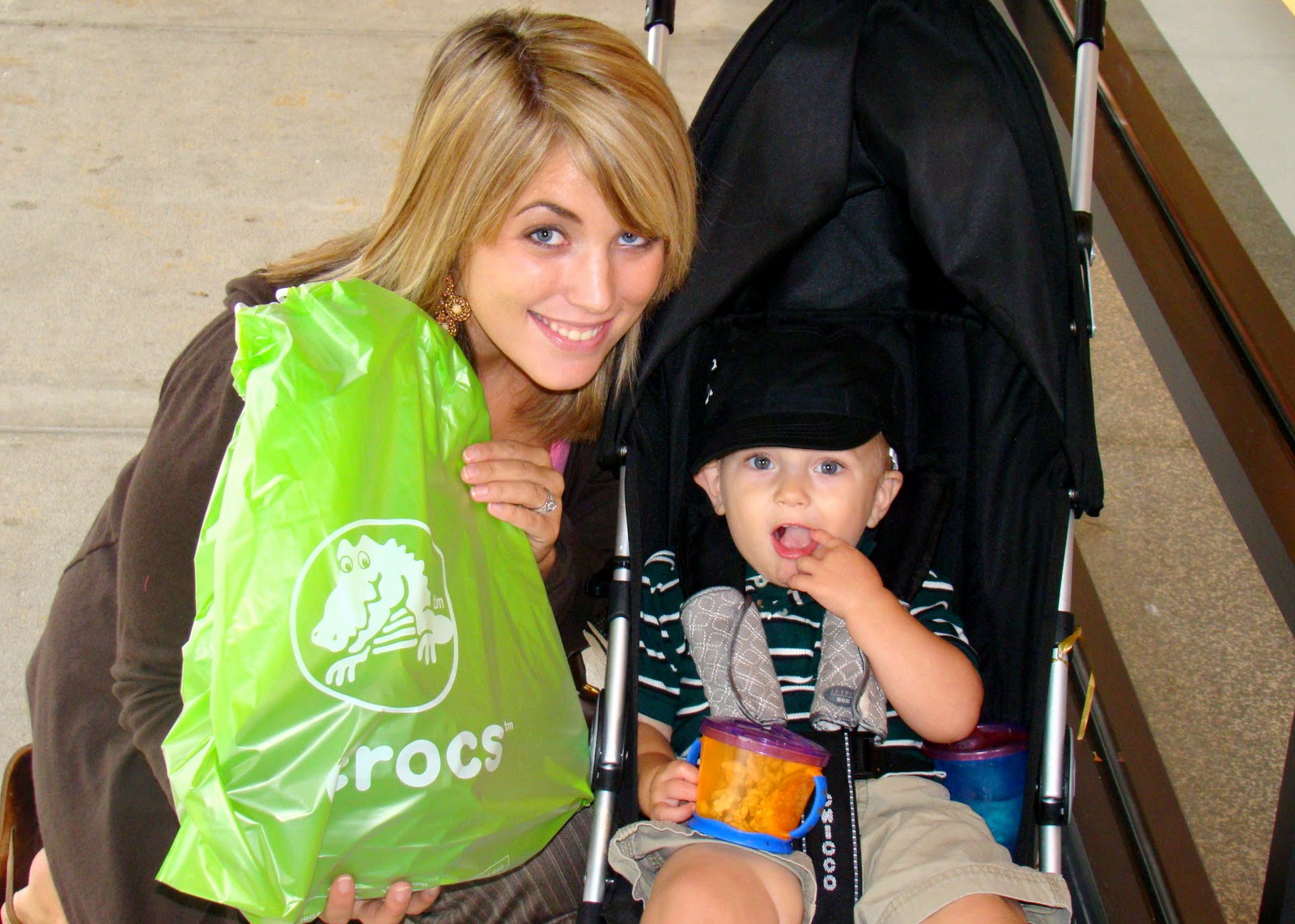 After shopping it up we headed over to this cute little pizza place right at the base of the mountain for dinner. While they were very sweet there, they were also very slow in their service so I took Kye out to play. He had a blast running all over the place and I enjoyed letting him get the energy out 😉 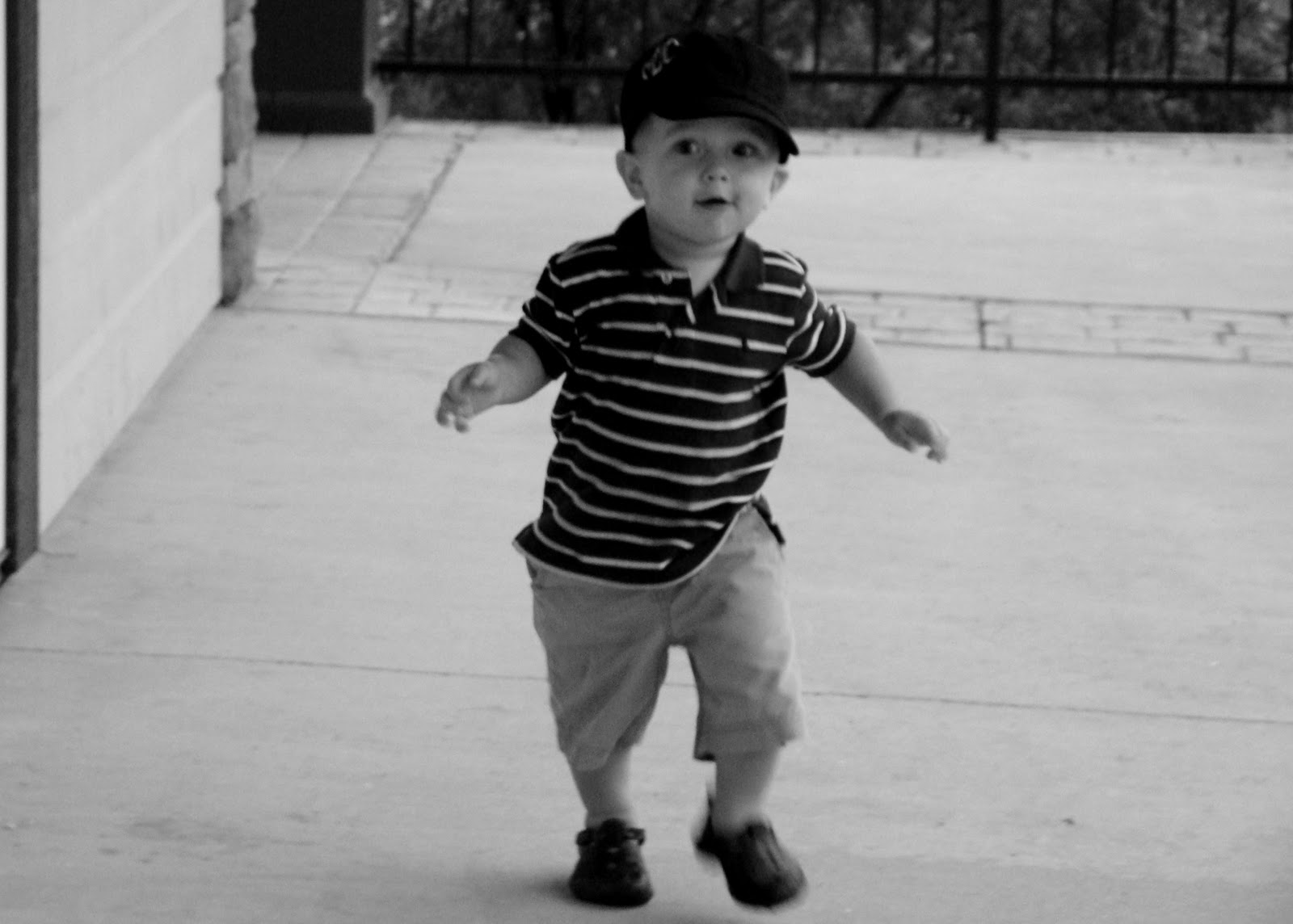 there was a very strange cow wearing a robe statue 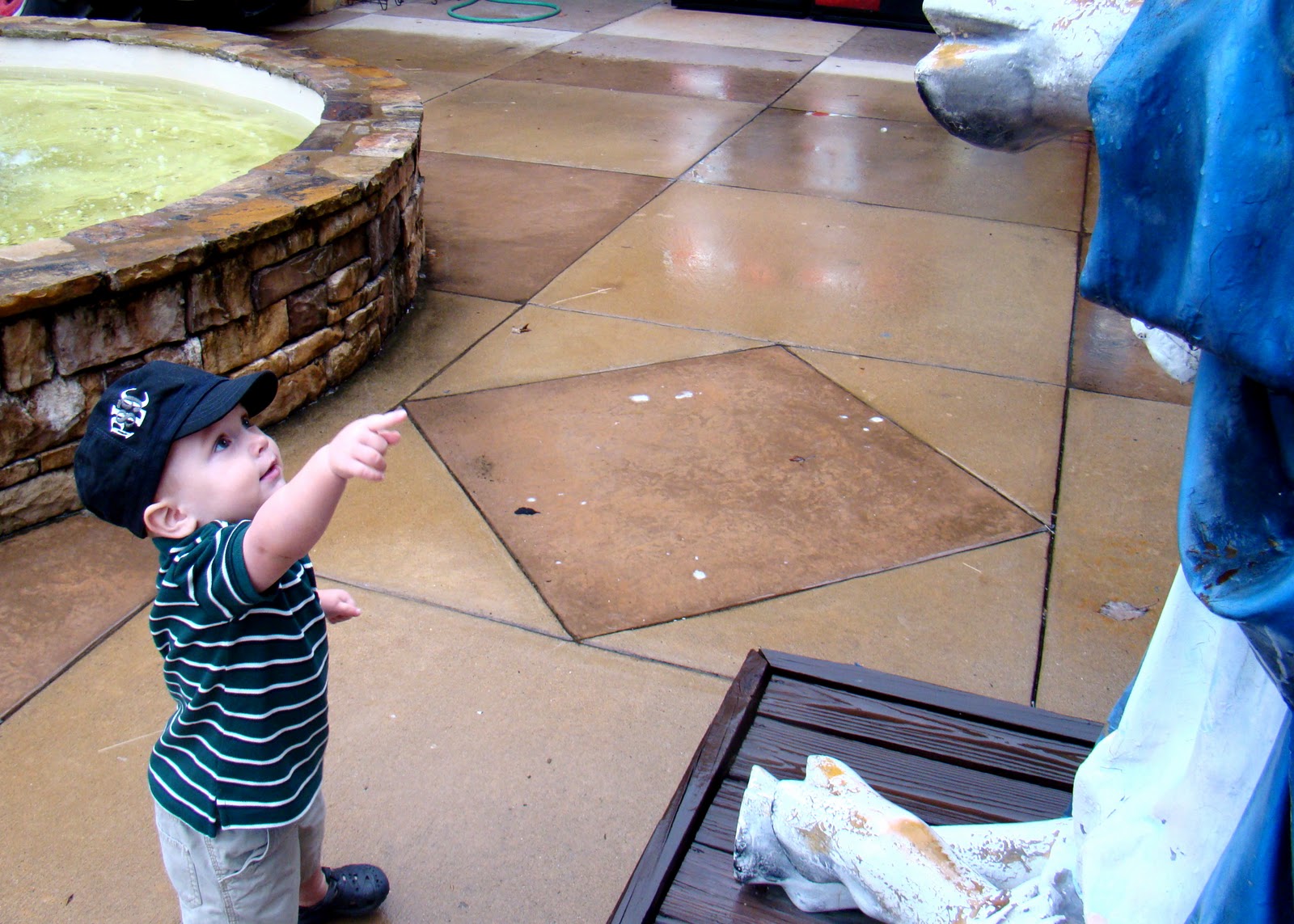 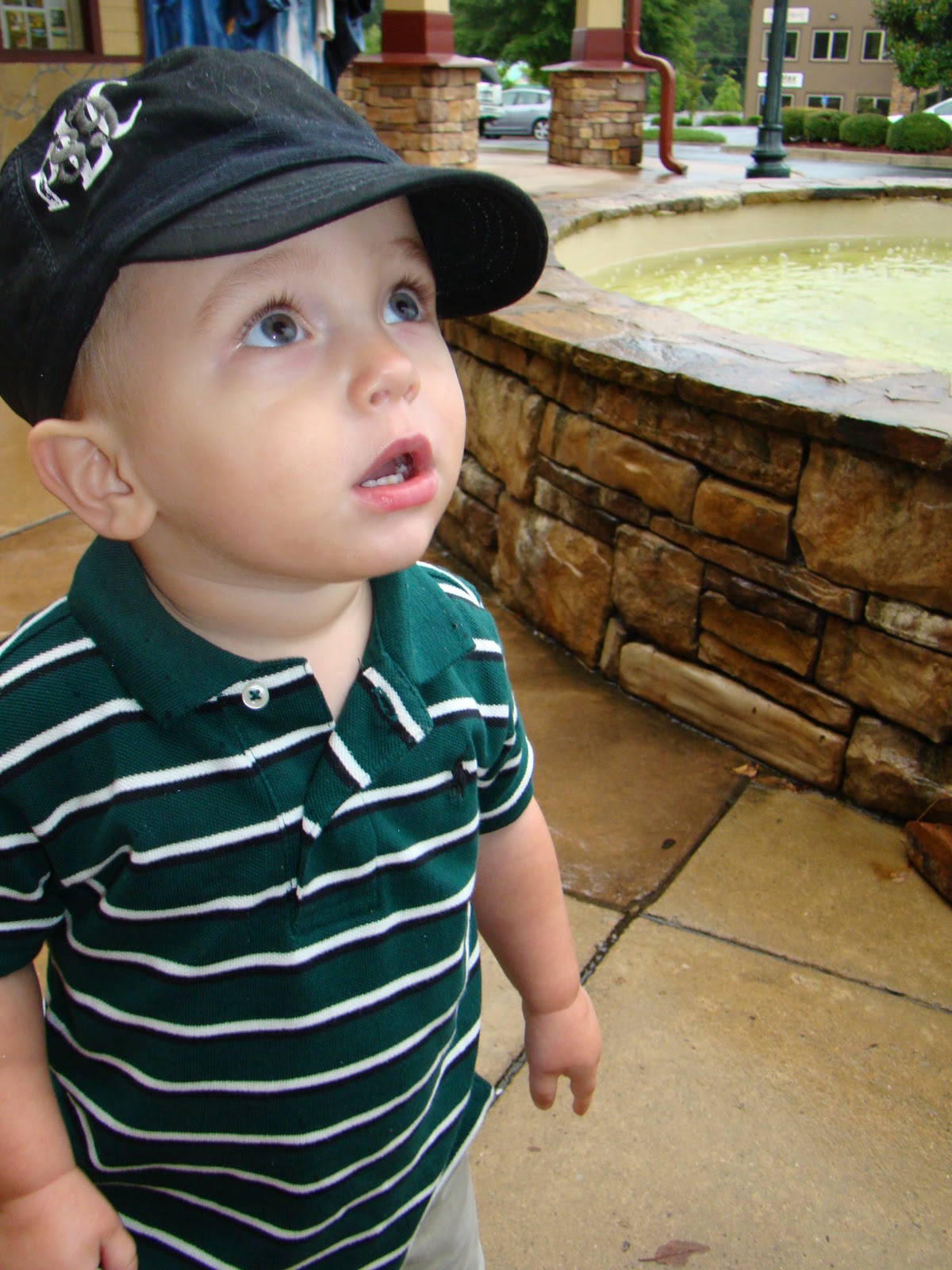 we ended up playing a long time as the restaurant had lost our order, but hey, they gave it to us to go and for free so it was okay by me 😉 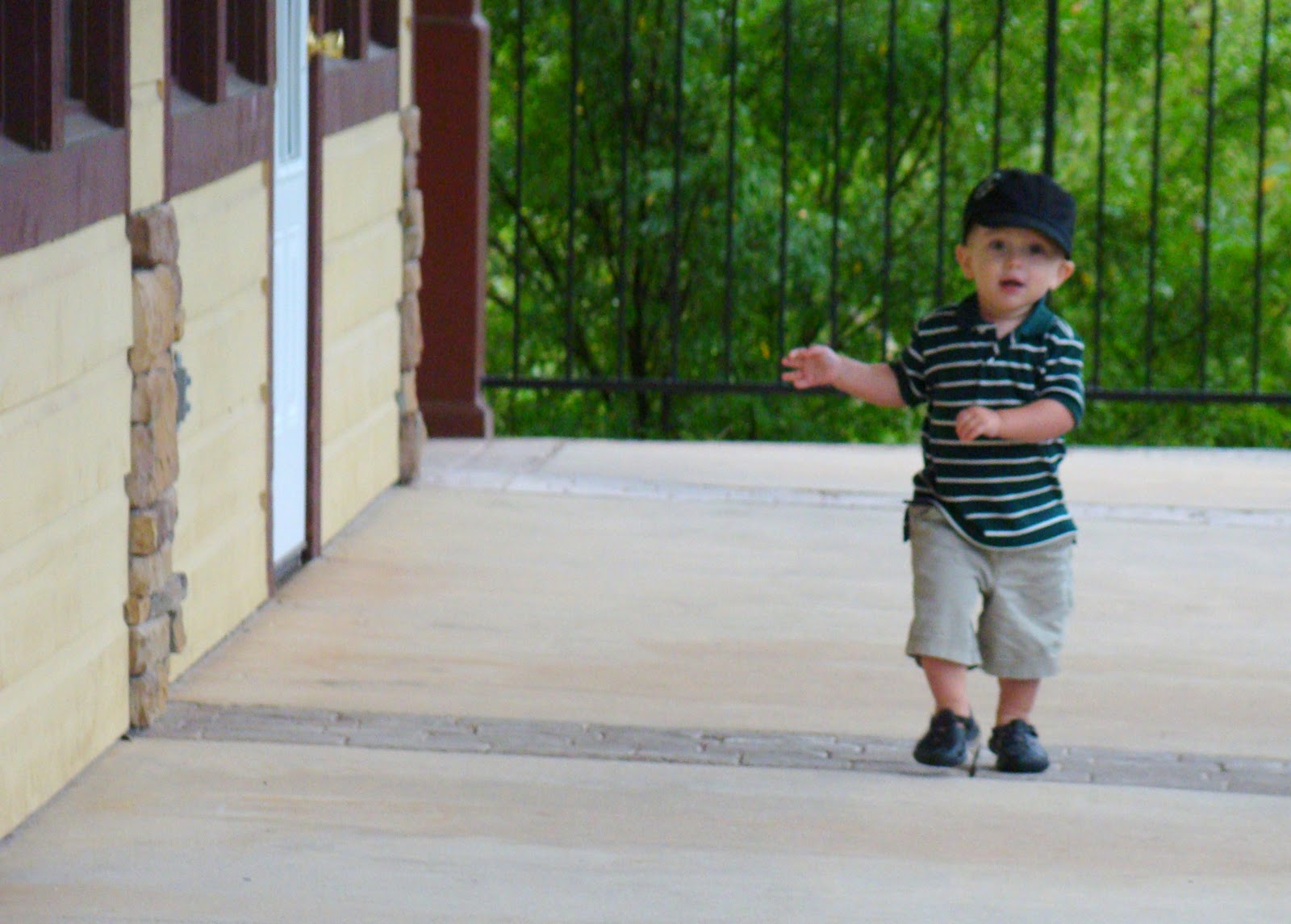 On our way back up the mountain we got to see these deer-how cool is that?!? 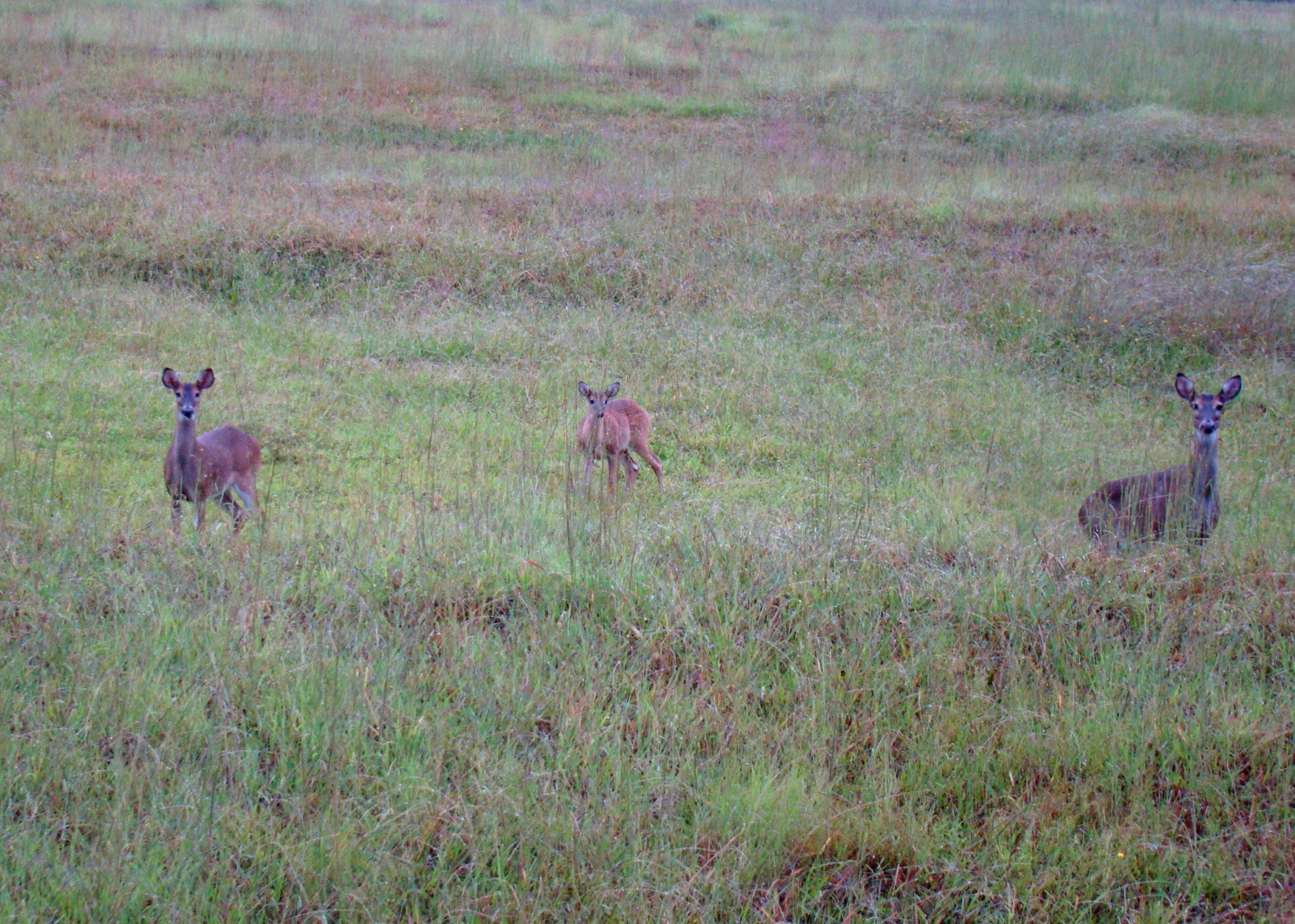 There were not too many things to do during the week for Kye and I. I packed as many toys and such as I could, but with such a short attention span it was a tough time. Luckily, we purchased a set of Disney dvds online before we left (we got over 150 dvds for $200!) so Kye and I watched some of them. This was a special mommy/Kye treat for that week only! 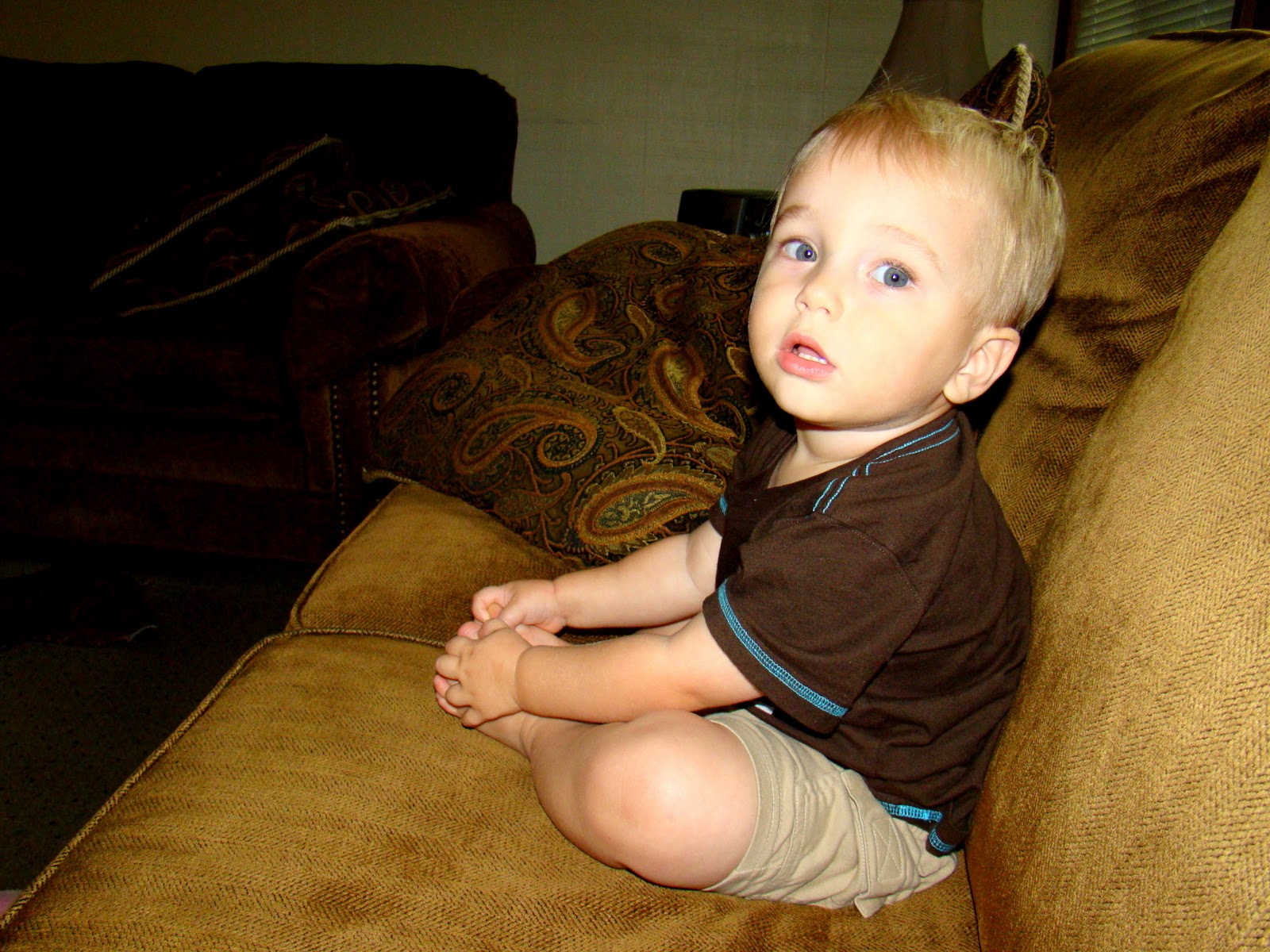 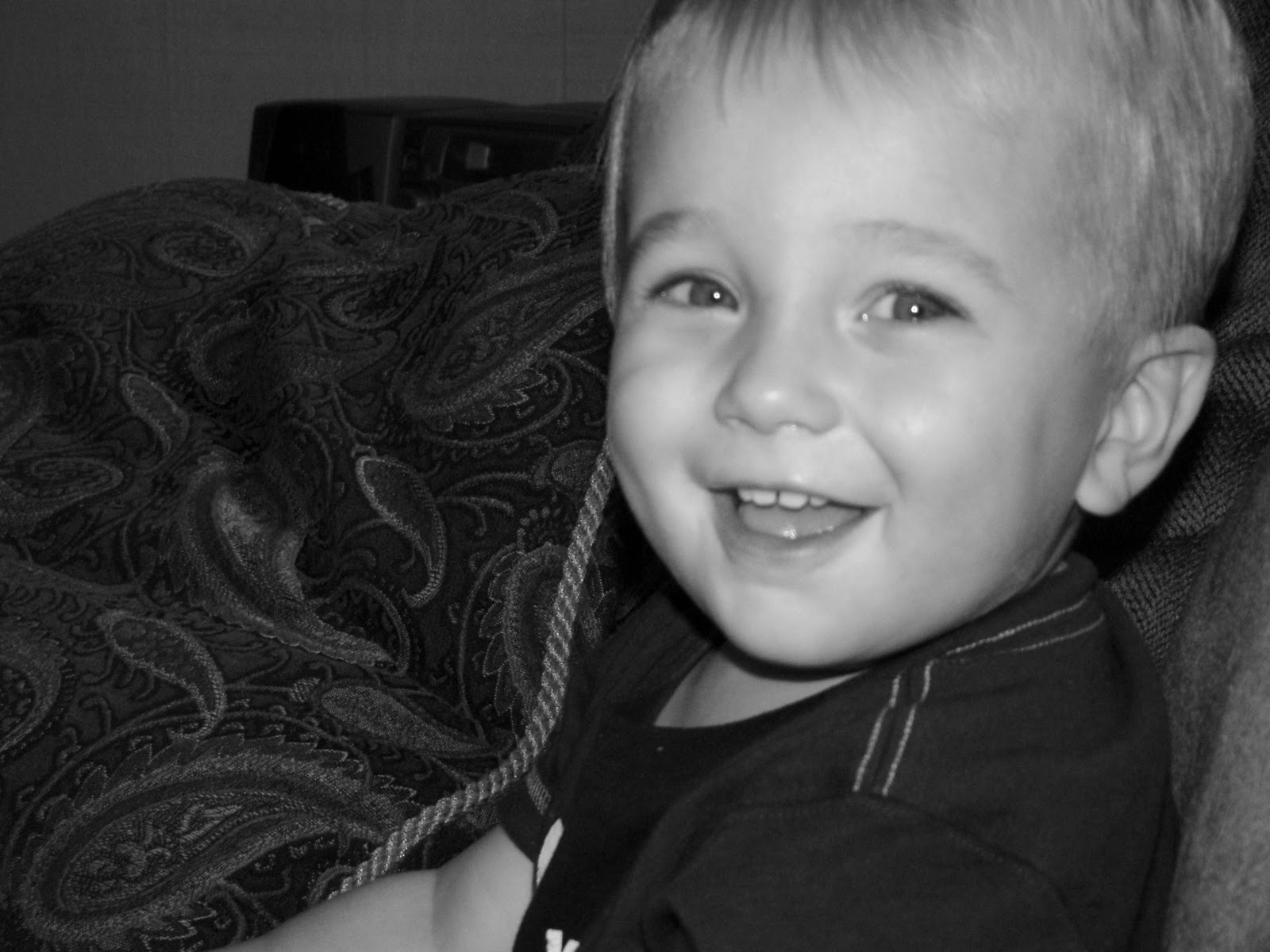 Another special treat for the week was cuddle time. Turns out that the Georgia mountains are a little cooler than it is here in Valdosta. All I packed for the week were shorts and t-shirts for us both and we were FREEZING in the mornings. Kye would get up from sleeping in his pack and play and we’d lay in the twin bed and cuddle with the blanket for awhile. I LOVED this time and it’s my favorite memory from the week. I won’t be doing it at home or anything (he will NEVER sleep in our bed!) but it was a special treat and we both loved it! 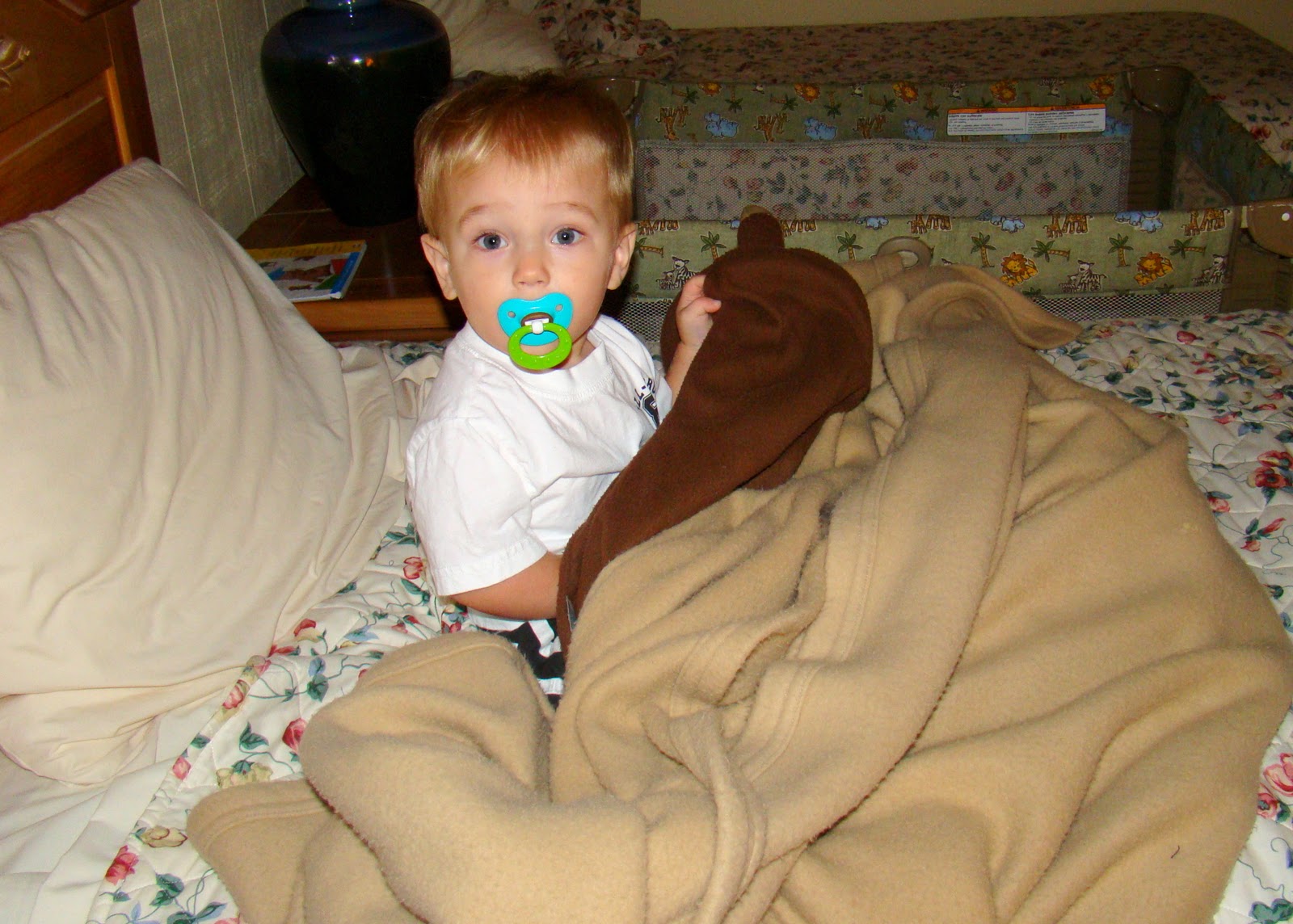 Kye is going through a HUGE “daddy stage” right now (post to come all about it!) and he had a hard time with Daddy being gone so much for work. So we played “work” a lot together and it helped keep him busy. He knows “Daddy’s at work” and what that means so he wanted to be at work too. 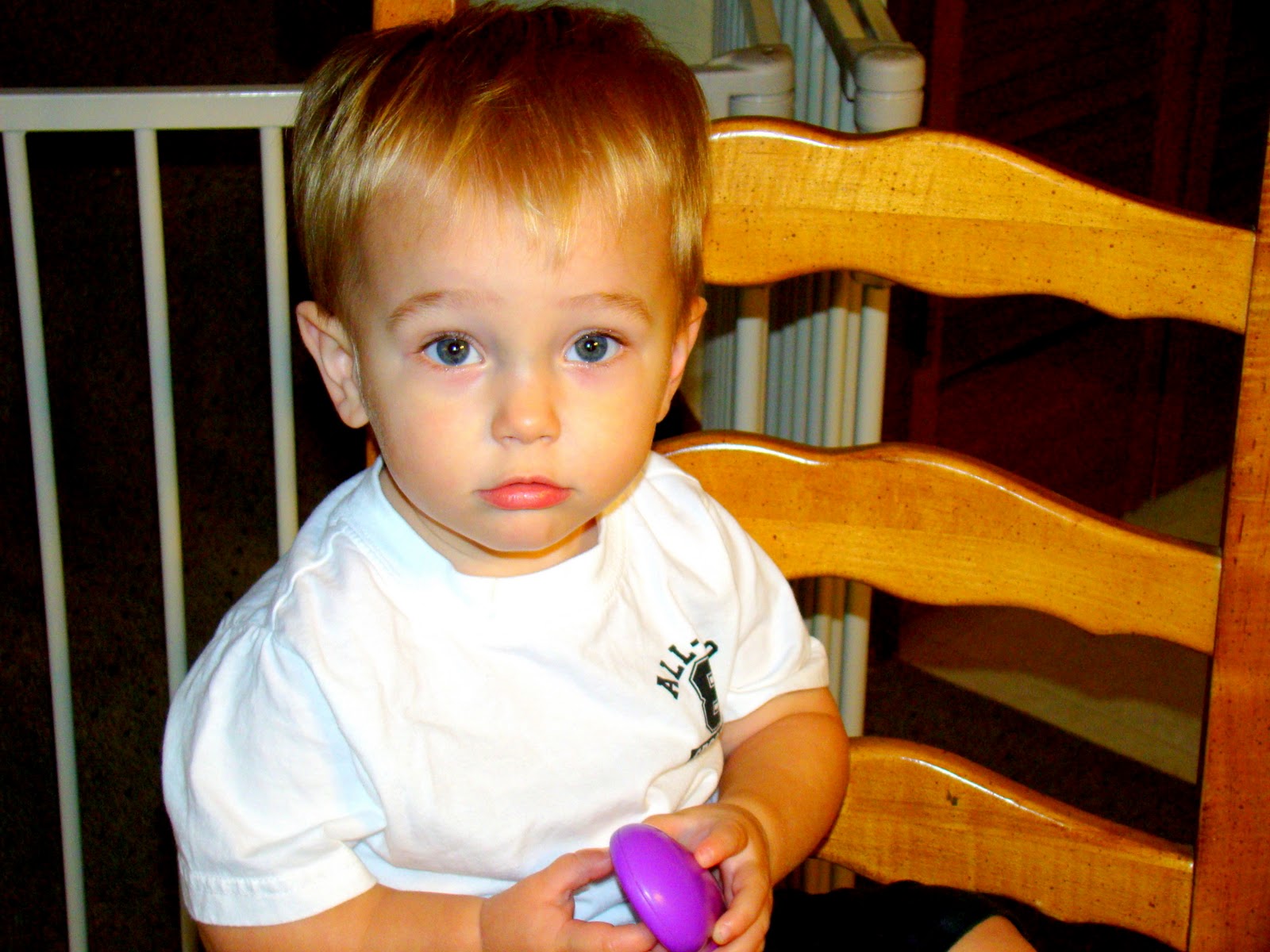 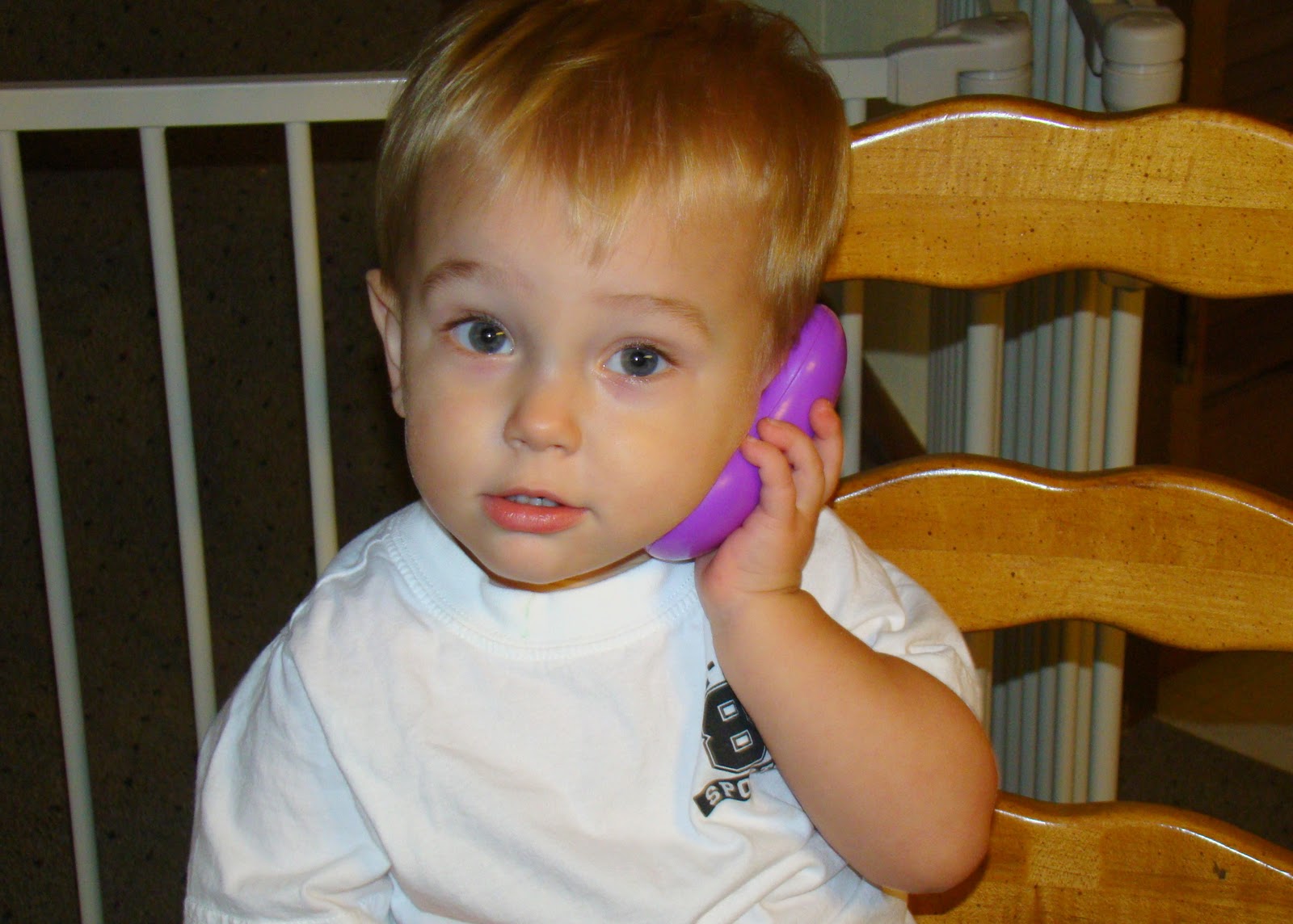 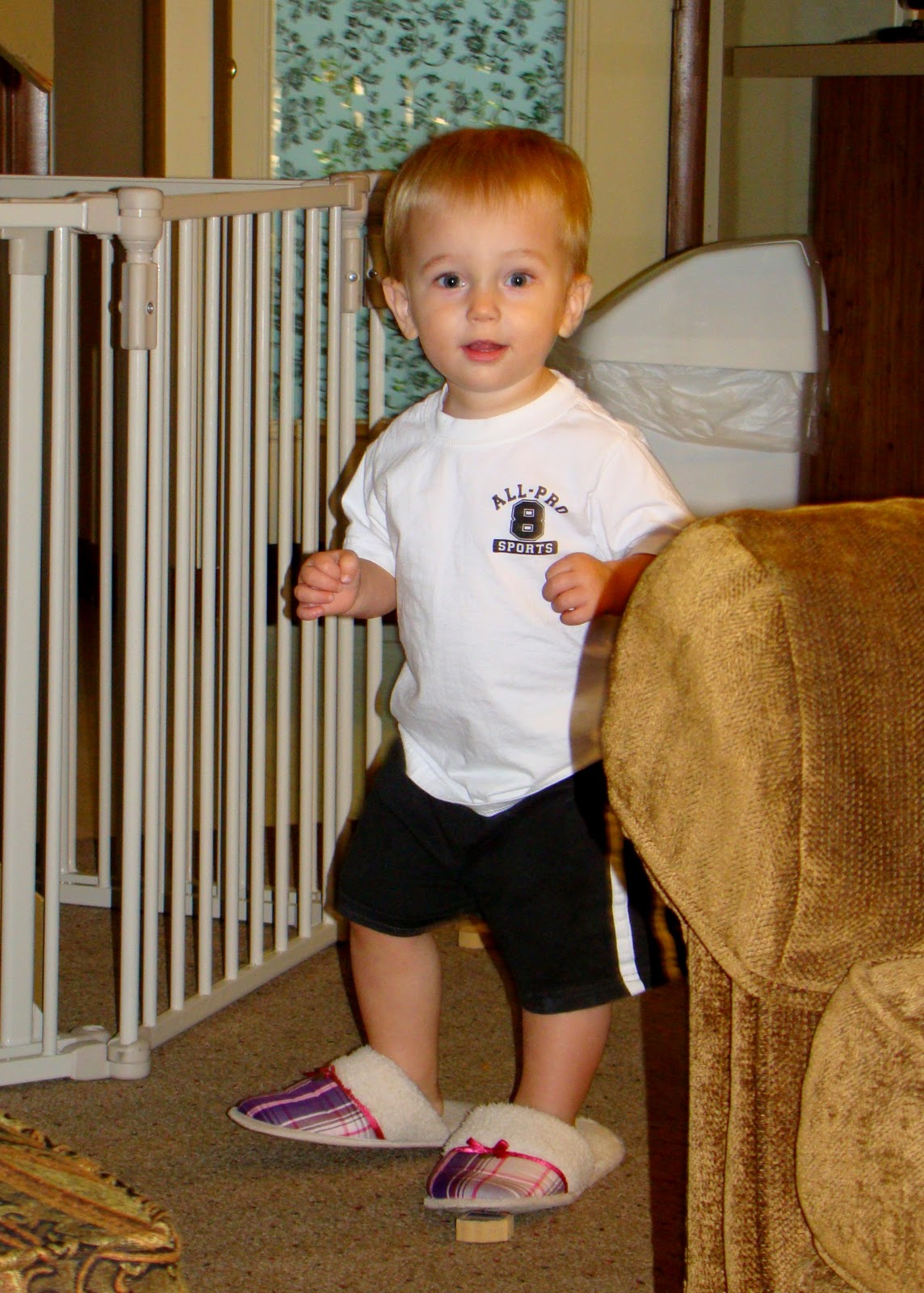 he’s an after hour firefighter 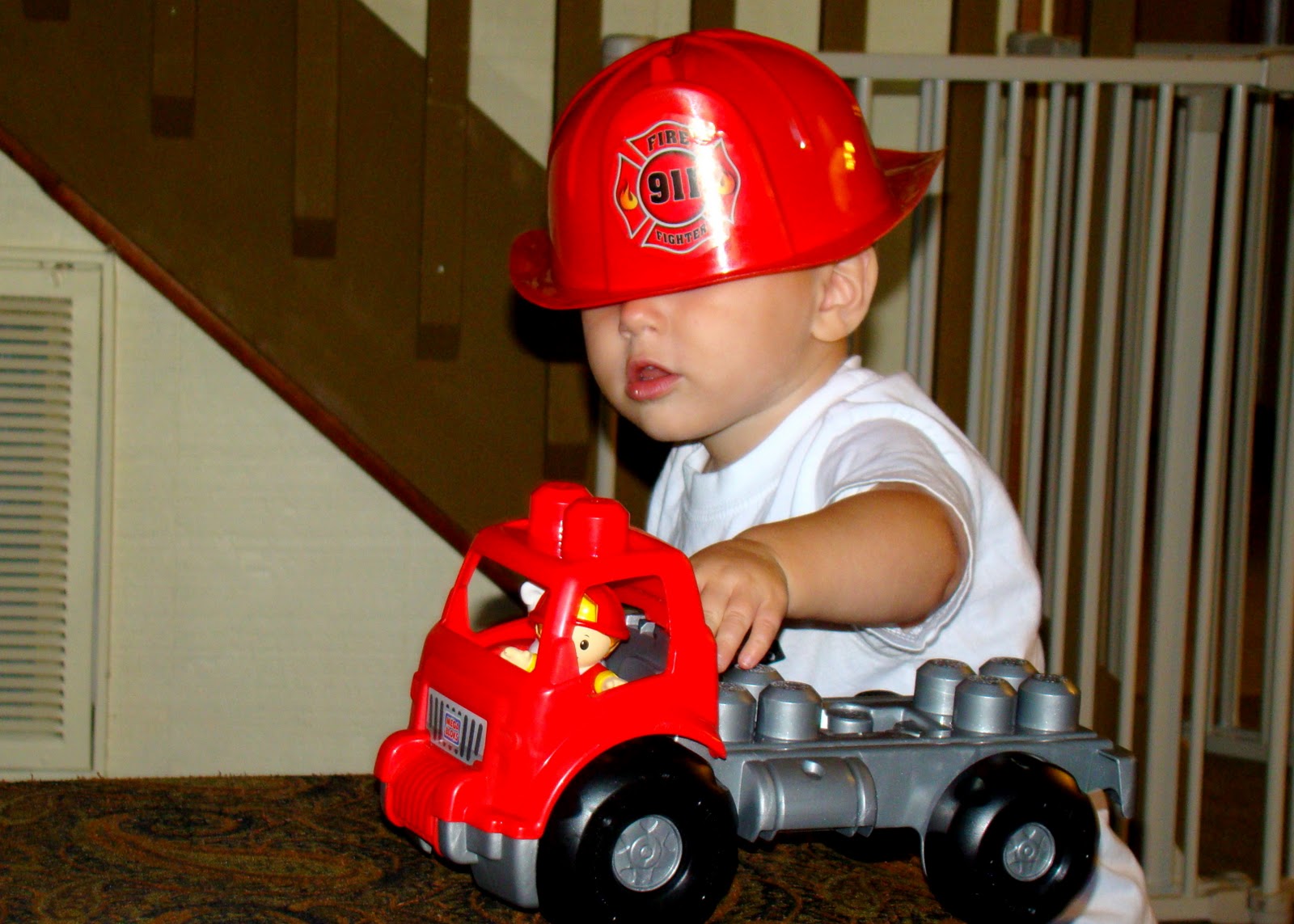 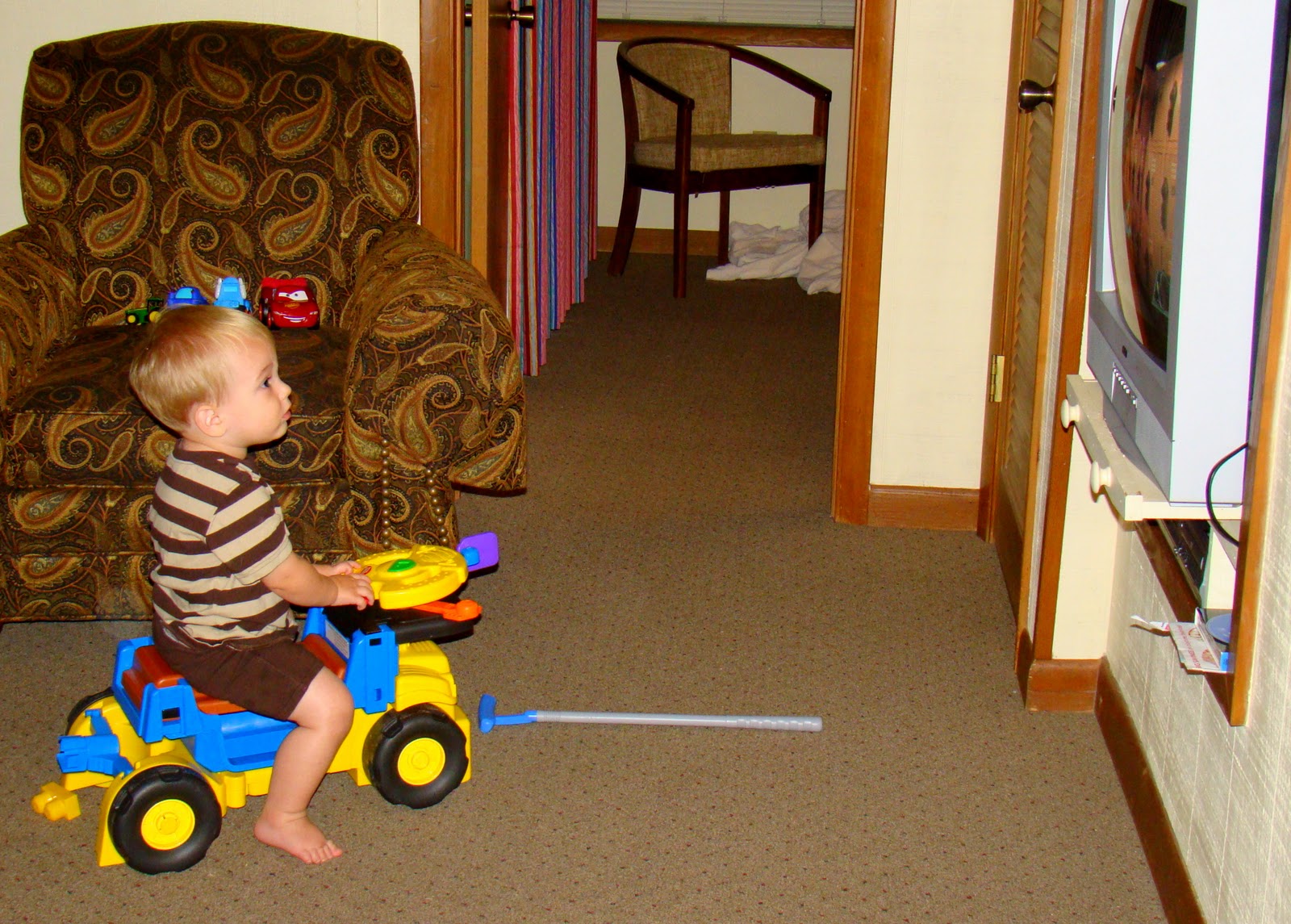 We did so much coloring that week that I’m doing a separate entry on that alone. Along with coloring, Kye also enjoyed a lot of Play-doh fun

. So much so that if I took my eye off him for a second I’d find him on top of the table getting it down to play! 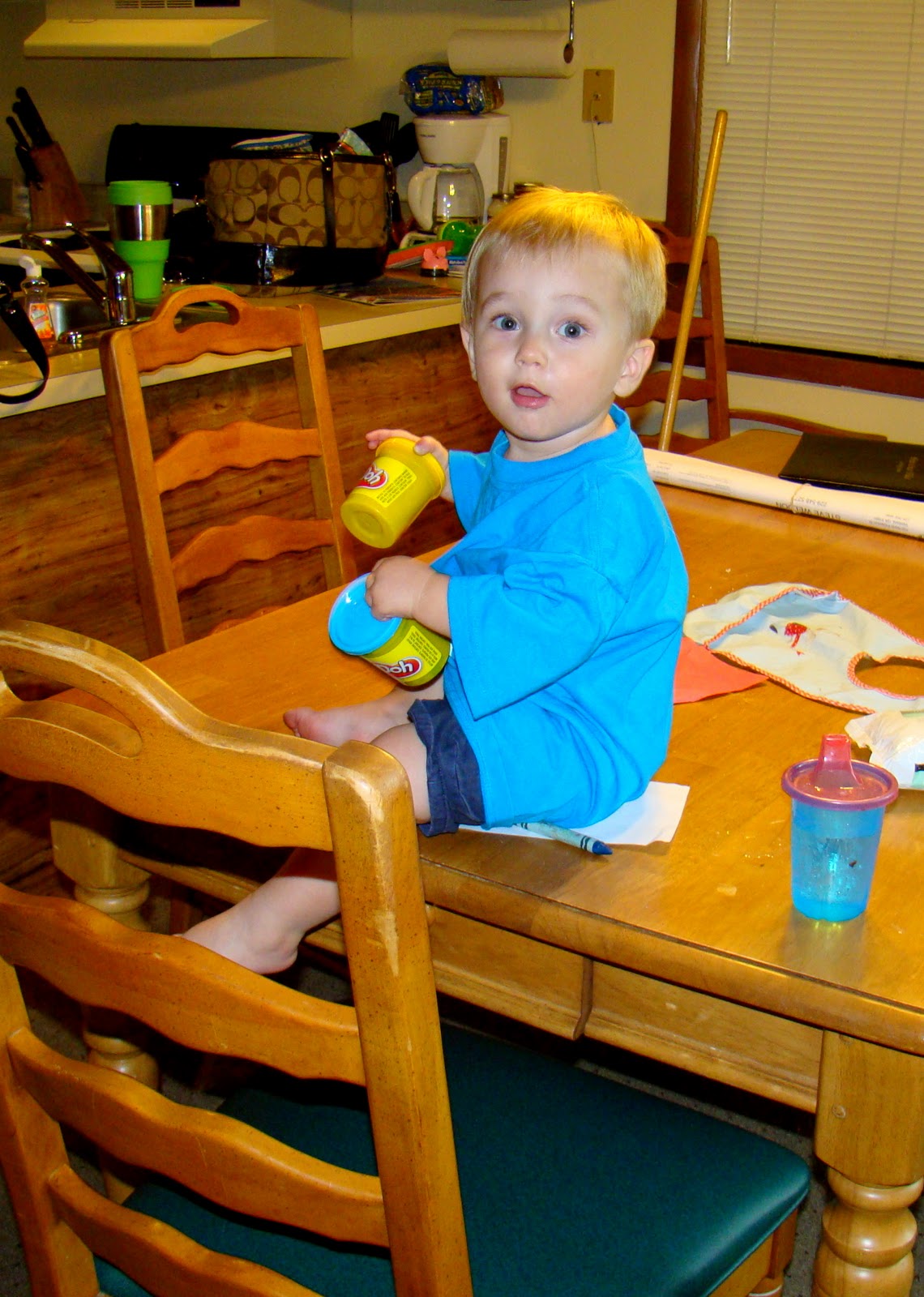 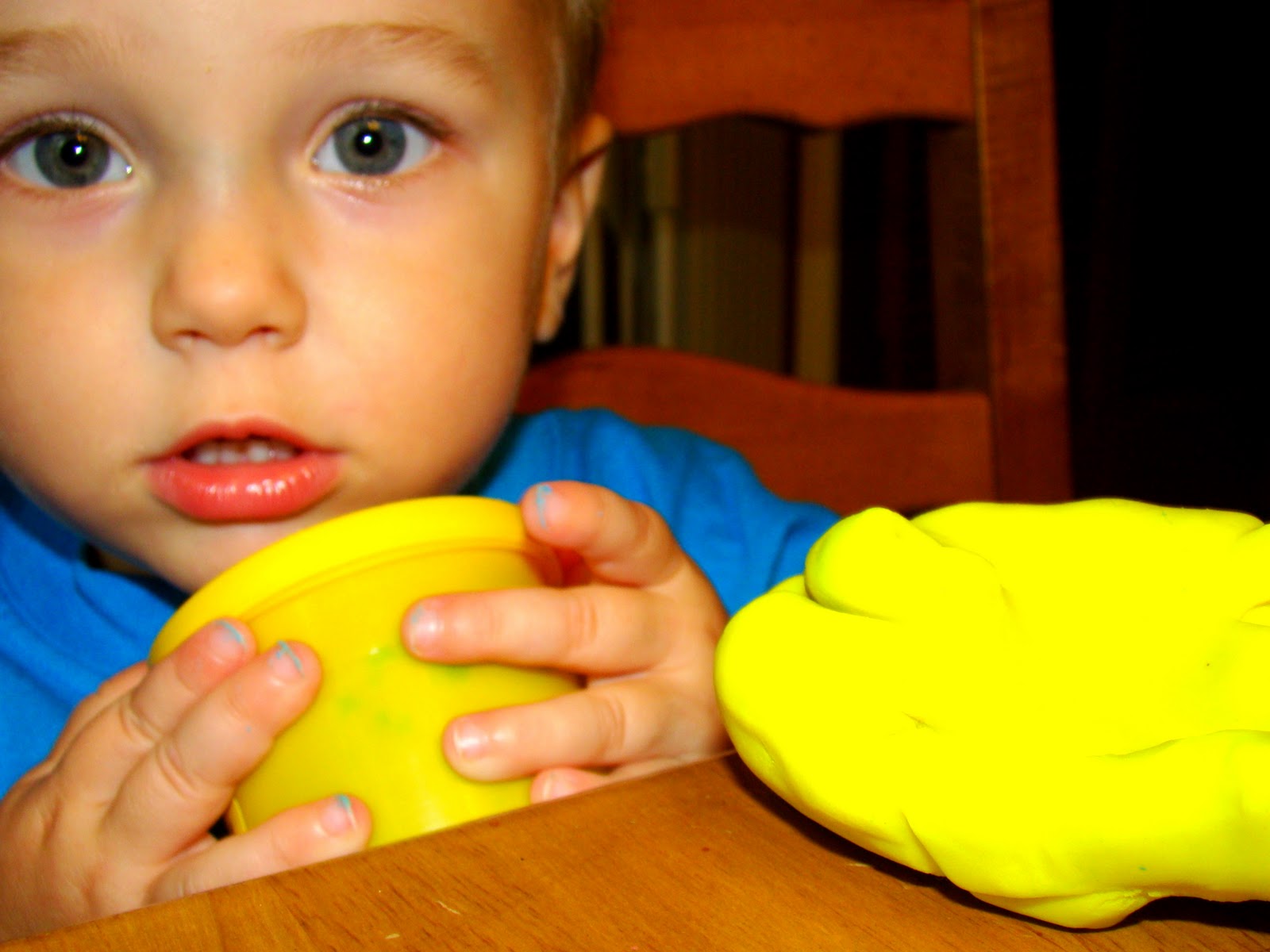 When boredom peaked we’d get creative with things to do, especially in the kitchen 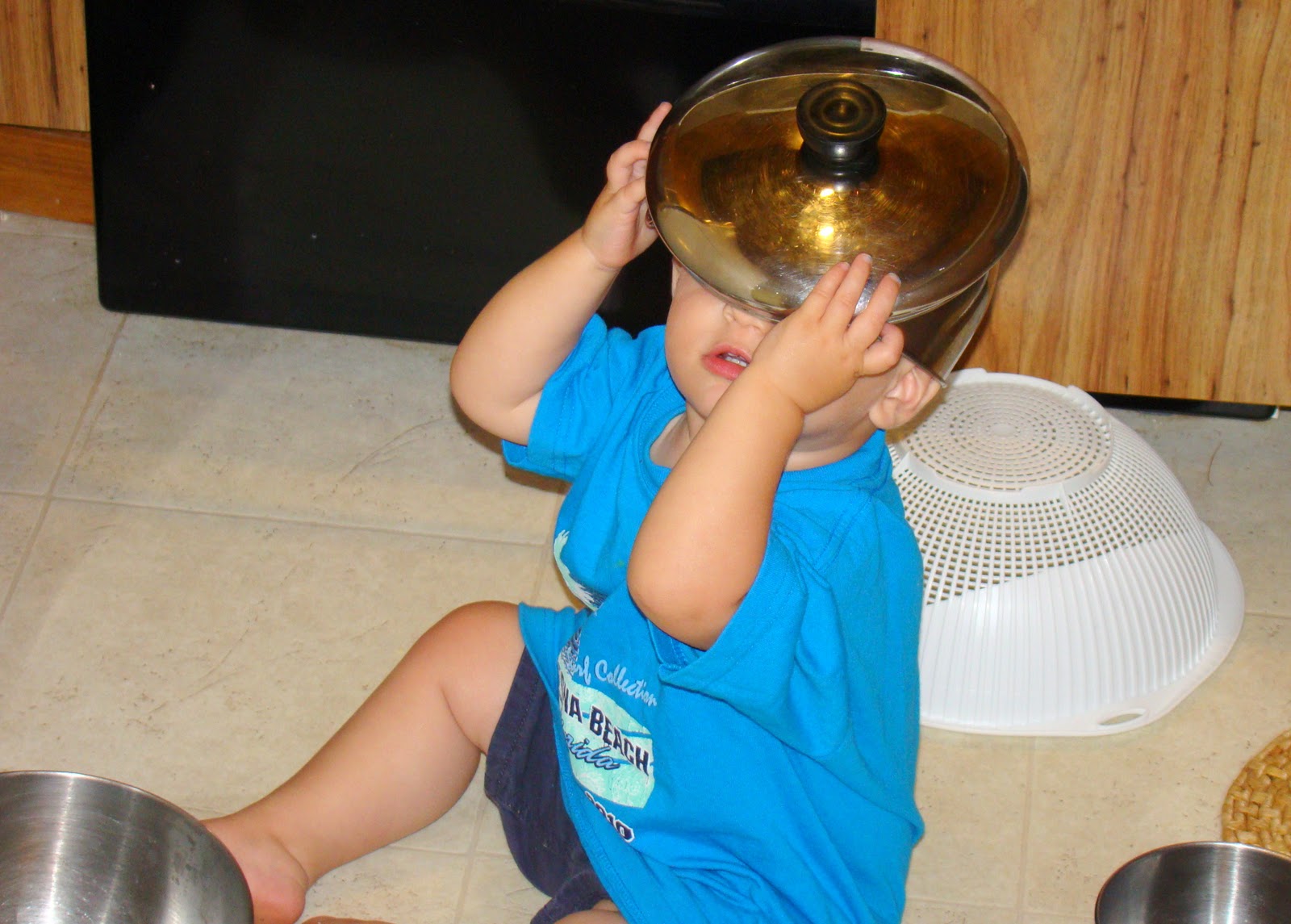 this reminds me of the Tin Man from Wizard of Oz 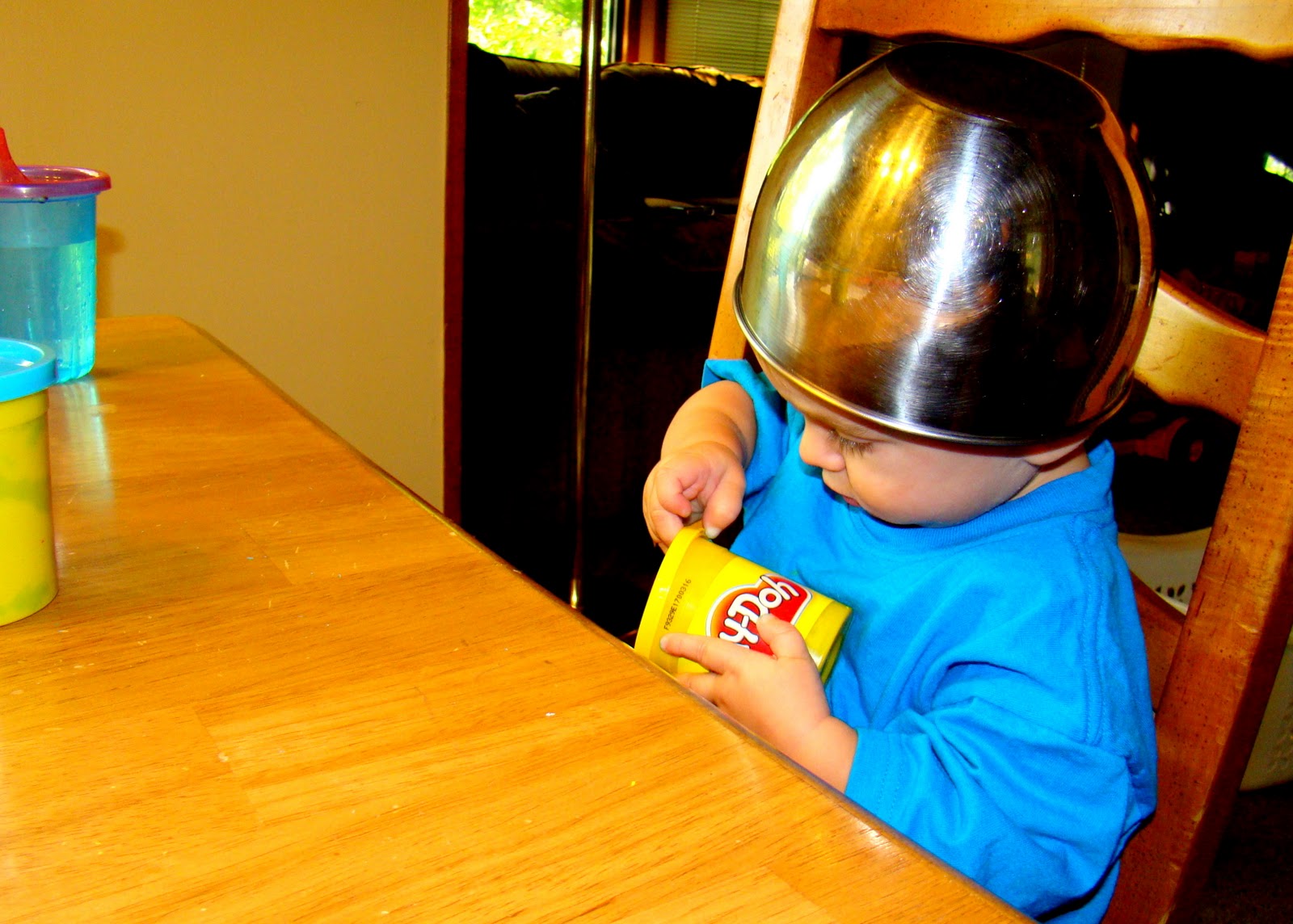 Of course Daddy time in the evenings was the time we both looked forward to all day. The condo had stairs that I kept blocked off but at night we’d let him practice climbing up and down so he’ll be ready for the new house! The upstairs was a loft/bedroom area (the condo was HUGE…it slept 8 people!) and it was a perfect place to teach Kye how to play hide and seek 😉 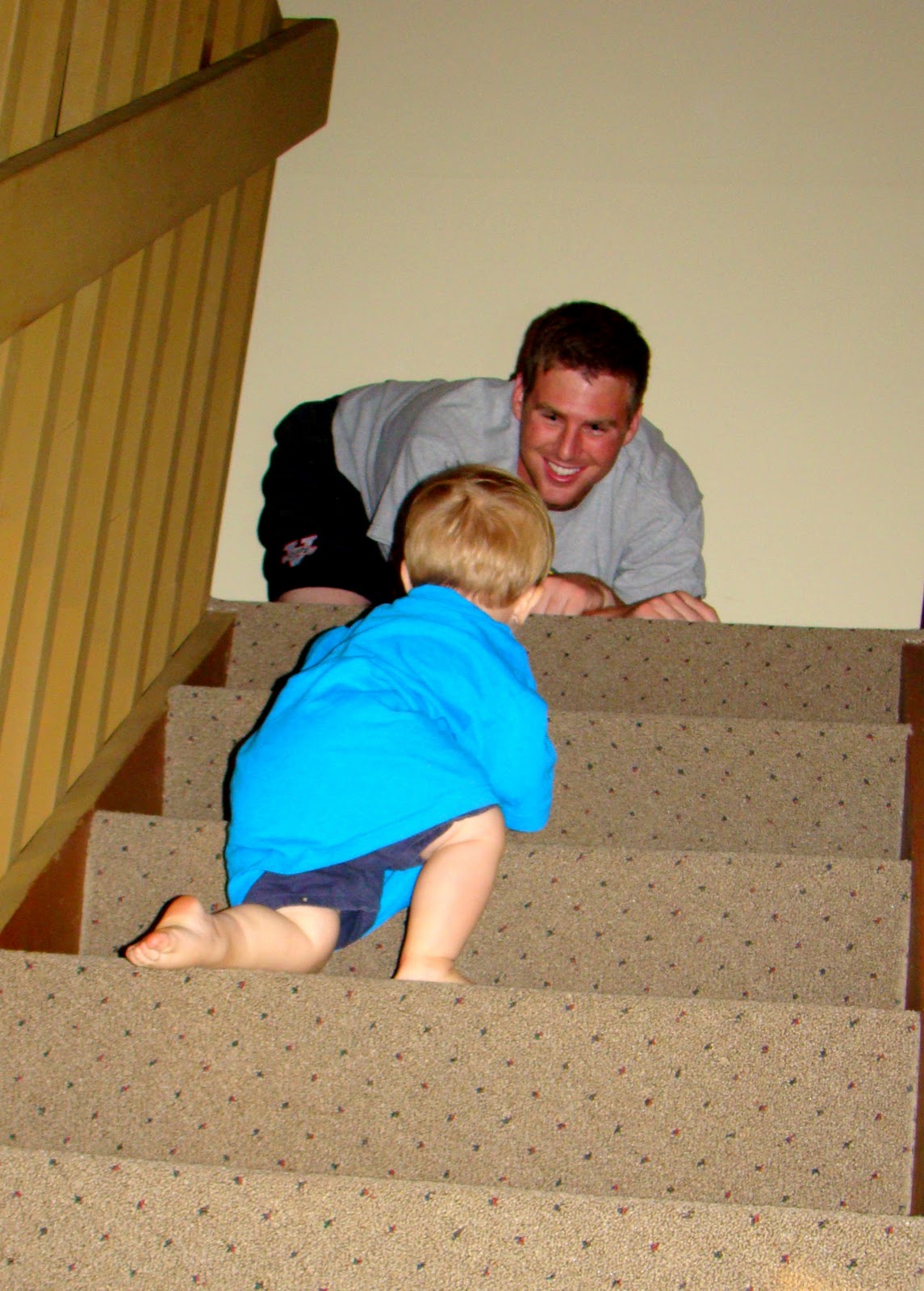 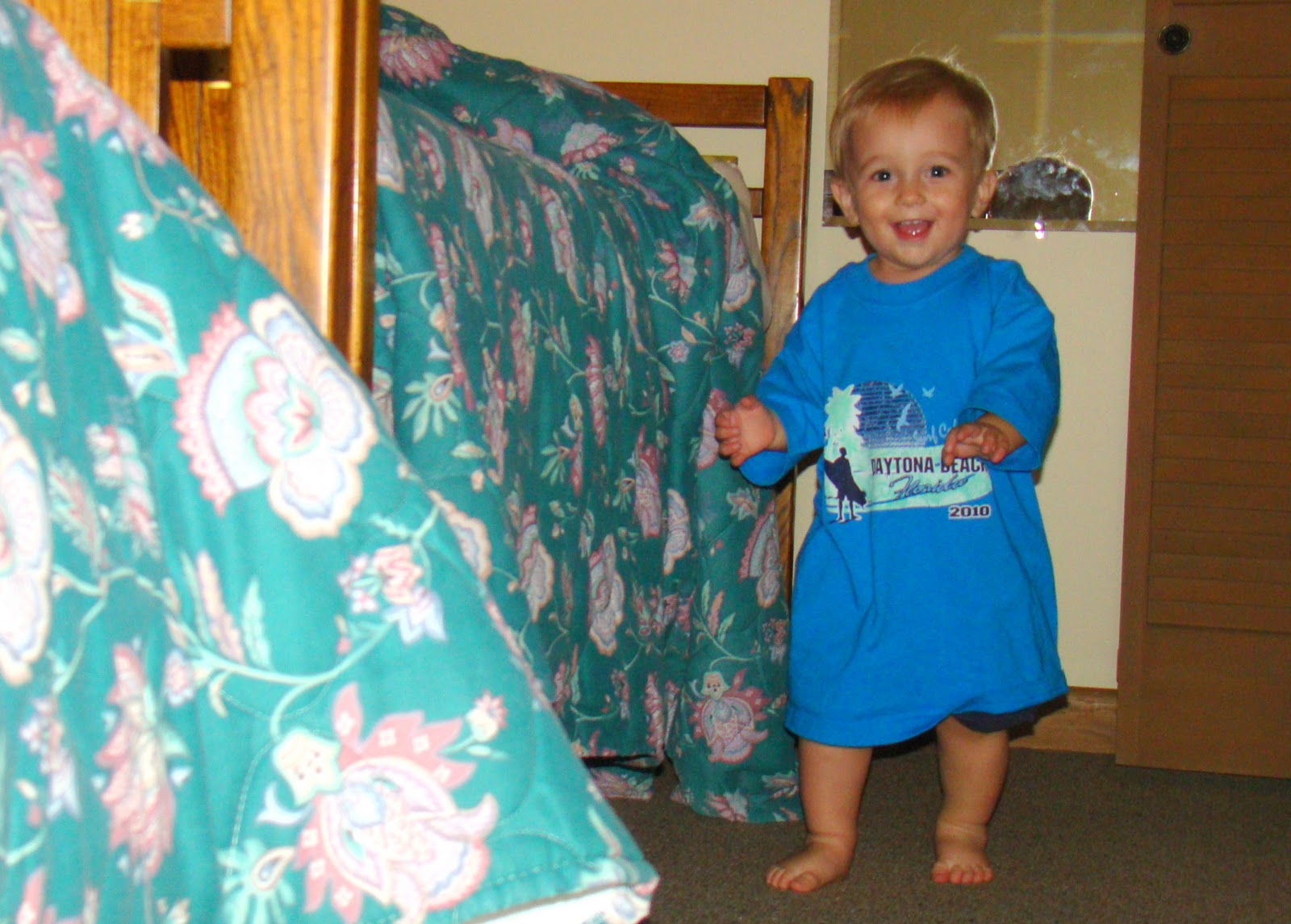 hmm could he be under the covers? 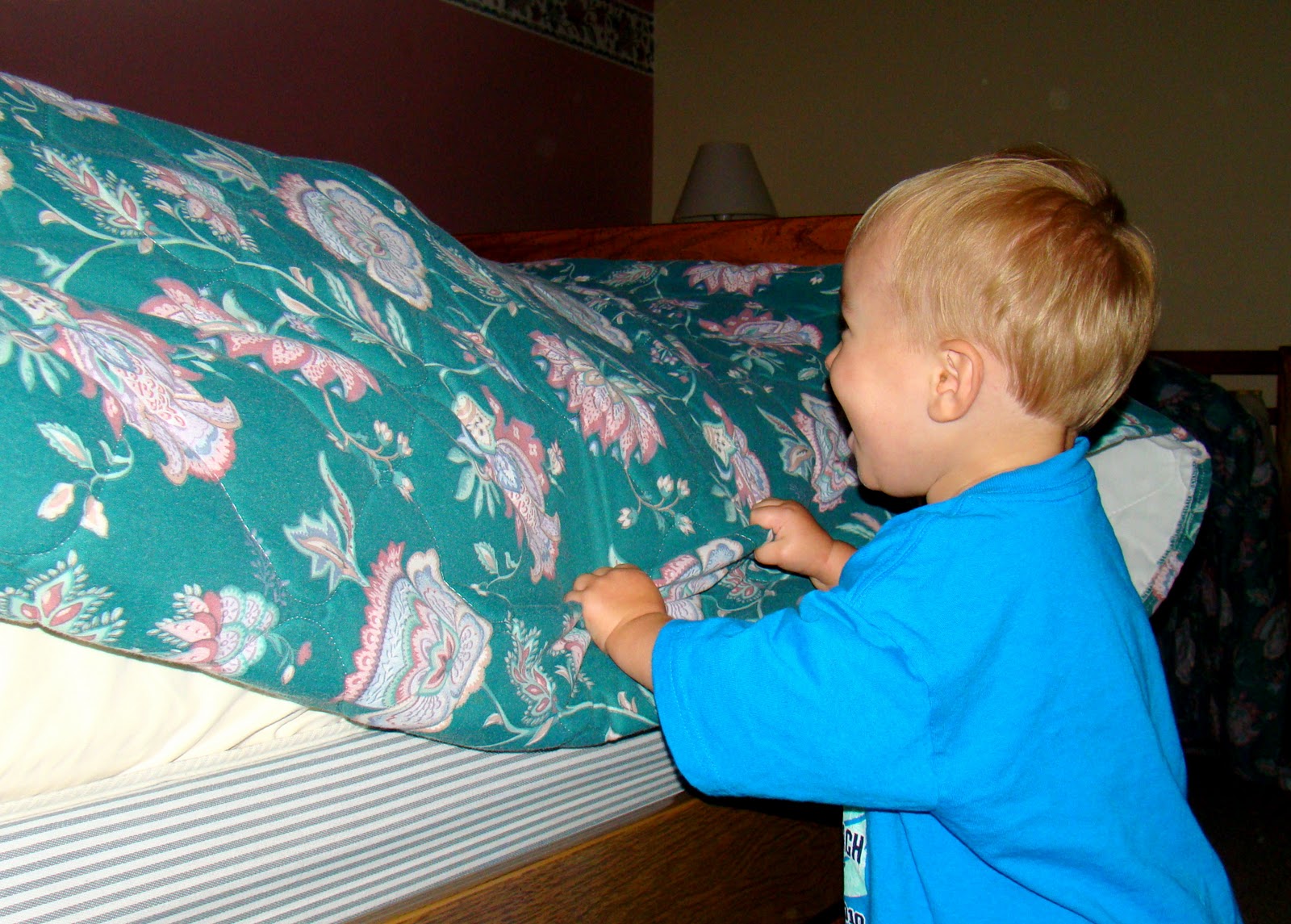 going to hide in the closet on his turn (you can tell he loved that mirror too huh?) 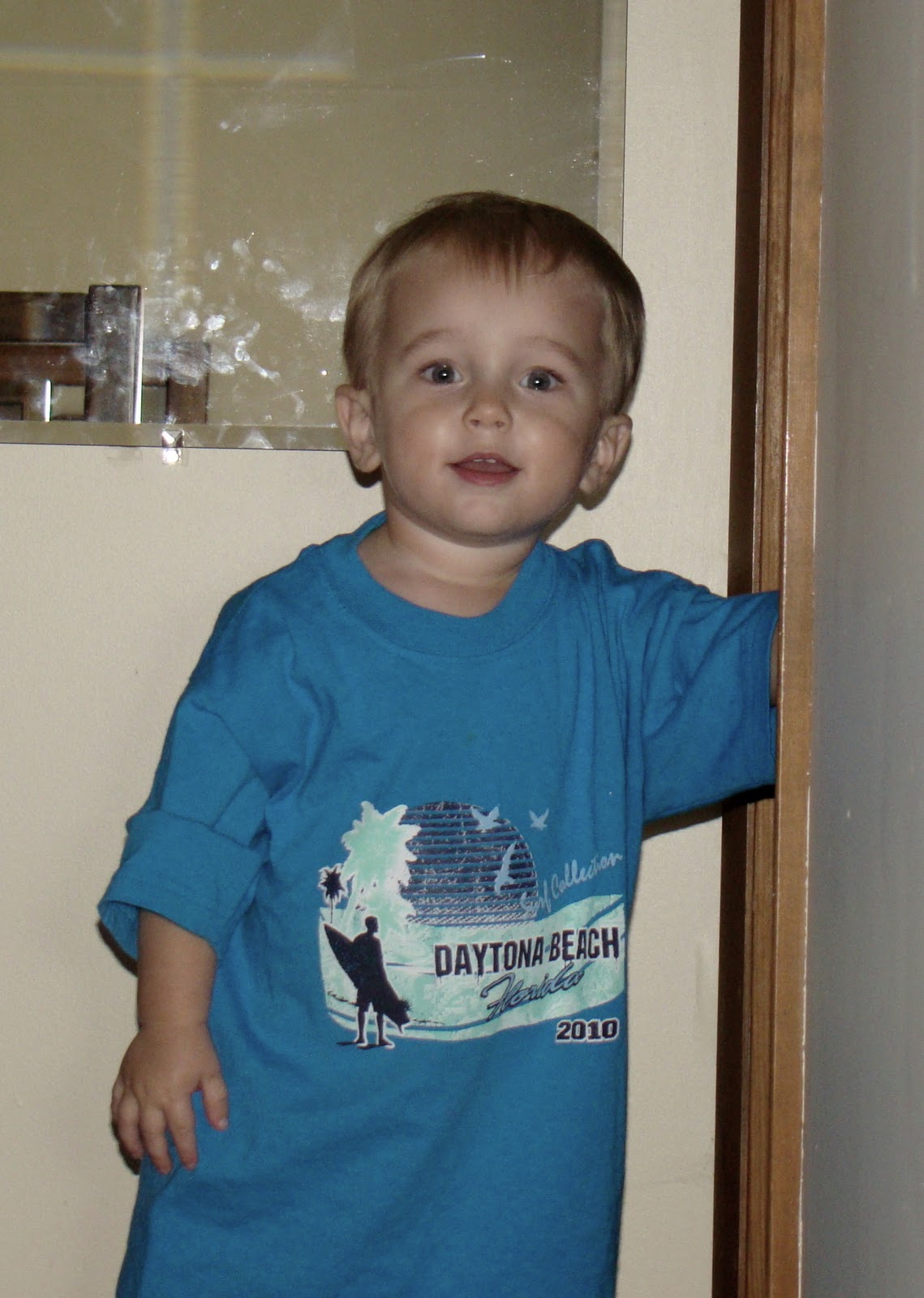 The whole week was pretty nice and relaxing. Sure, it got borderline boring at times but being bored is such a luxury in itself ya know? How often as adults can we say we are bored? Not often! It was a nice week away and a chance for me to rest up before all the craziness of the wedding, Jamaica, and Mom’s big move! After Kye went to bed each night Zach and I got to unwind together and enjoy dinner just the two of us which we rarely do now. And we got to watch some of

so that made us both happy 😉

Each night for dinner we had pre-planned meals. We made chili before we left and ate on that most of the week and also made some pasta. The last night Zach got home early enough for us to have a family dinner so we decided to have a east filled with breakfast foods-including Zach’s famous pancakes! It was a TON of food for the three of us but a fun way to end a nice week in the mountains! 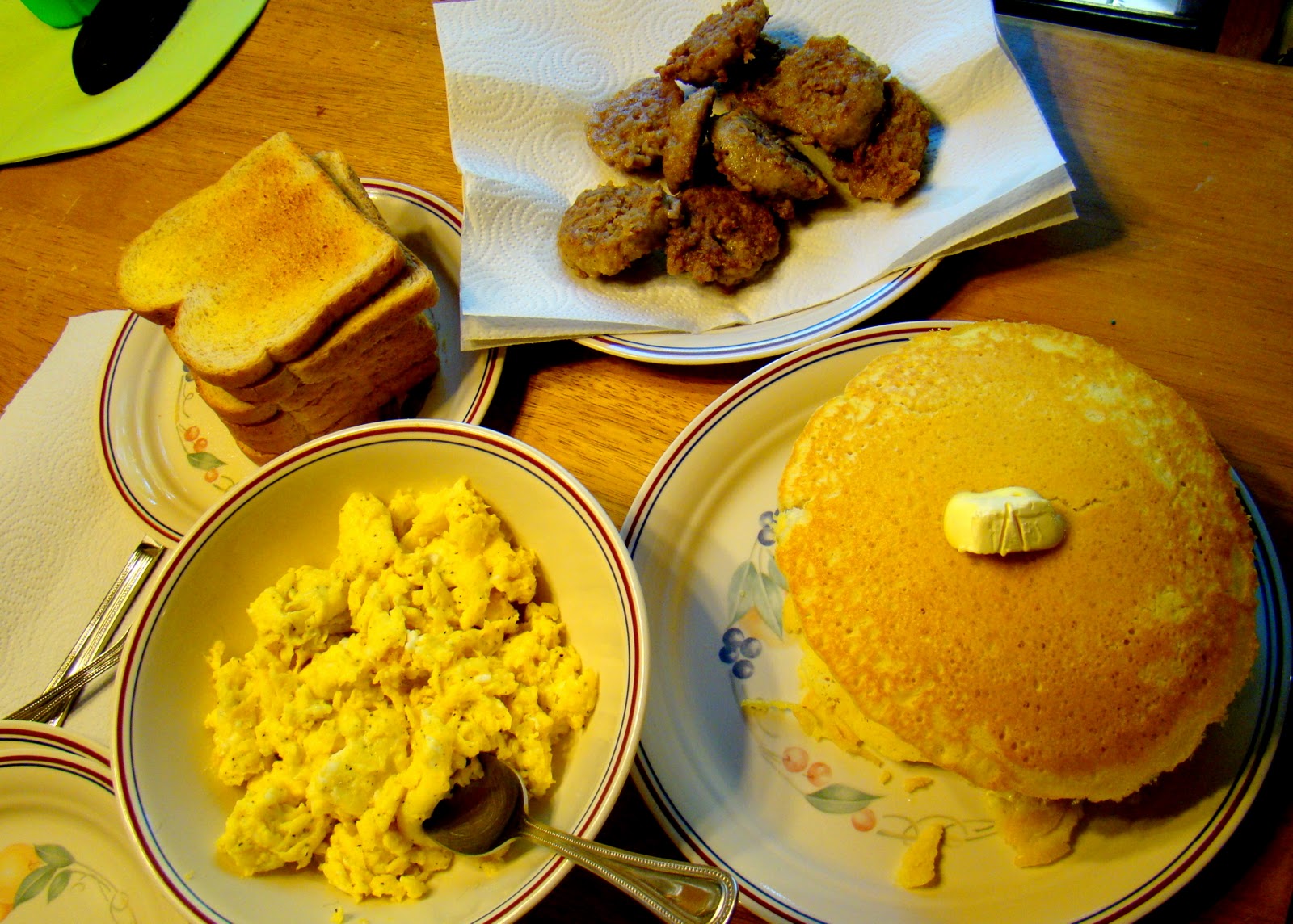 Hopefully we’ll get to go back again next year!