When Uncle Spear passed away there was no doubt in our minds that we wanted to go to Greenville, SC to be with my family and to honor his life. I was very nervous about the trip though (although excited to add another destination to Kye’s list of places he’s traveled! it’s pretty long considering he’s only 1!). So far we’ve only driven with Kye a max of 4 hours which works out great because he eats every four hours and he sleeps for 2 hours so we’ll leave right before his nap, let him sleep, then feed him in the car and be there soon after. Google Maps said Greenville would be a 6 hour drive and that’s a LOT longer than 4 hours with a toddler!!!

We timed it all out and left right after Kye finished breakfast. We hit the road at 8 and that way he was awake for an hour then napped then we stopped in Lawrenceville for lunch. Since I’m from Lawrenceville I knew there was a Chick-Fil-A close to the Sugarloaf exit so we got off there. Zach and I took turns eating so the other person could play with Kye in the playground! It was a great idea as we just stayed there for about an hour and 45 min to let Kye get out all the energy he could. Then he got back in the car right at his next nap time and since he was worn out he slept most of the rest of the way there! It wasn’t bad at all!!!

climbing into the playground 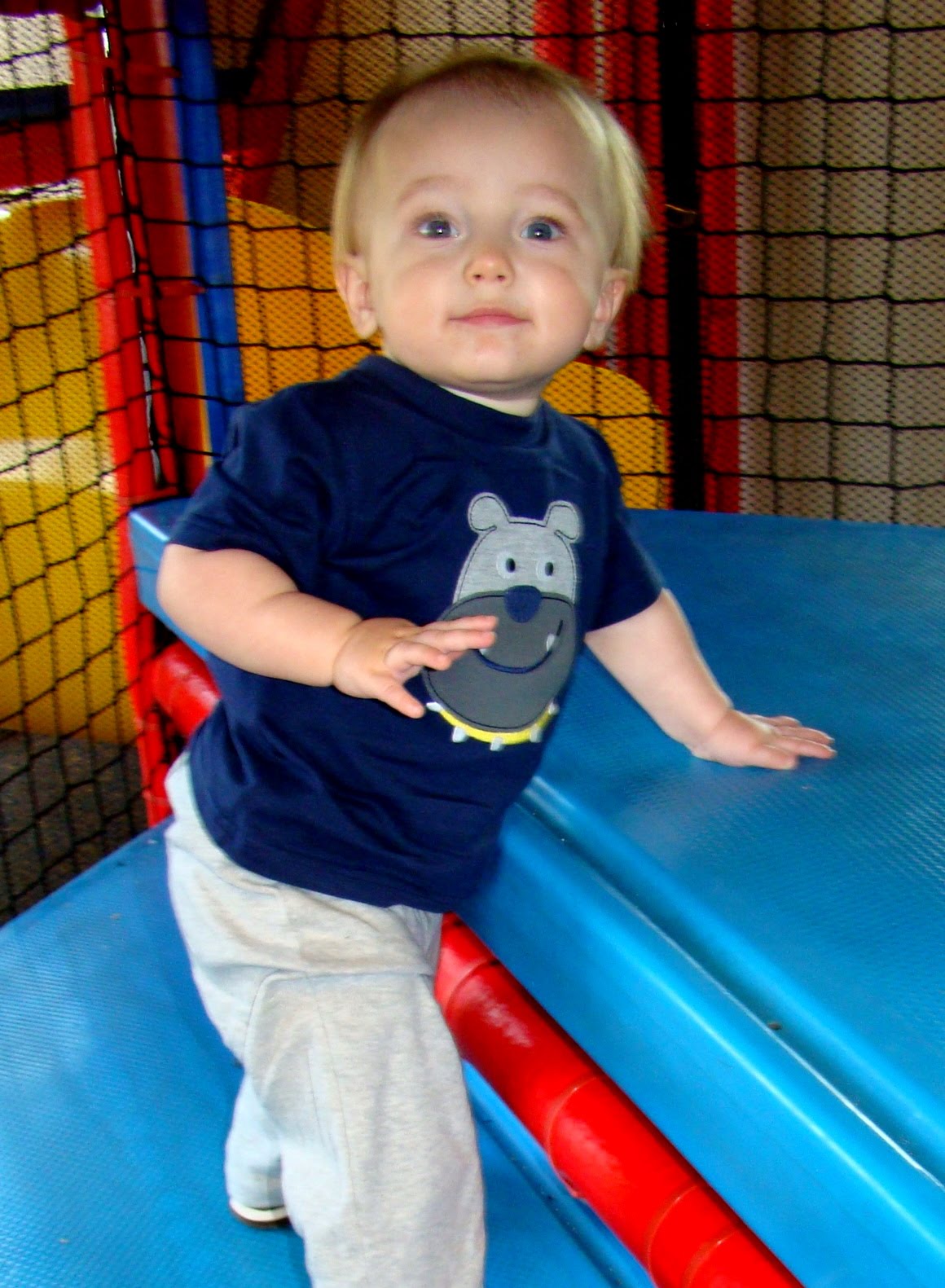 he climbed up the step all by himself! 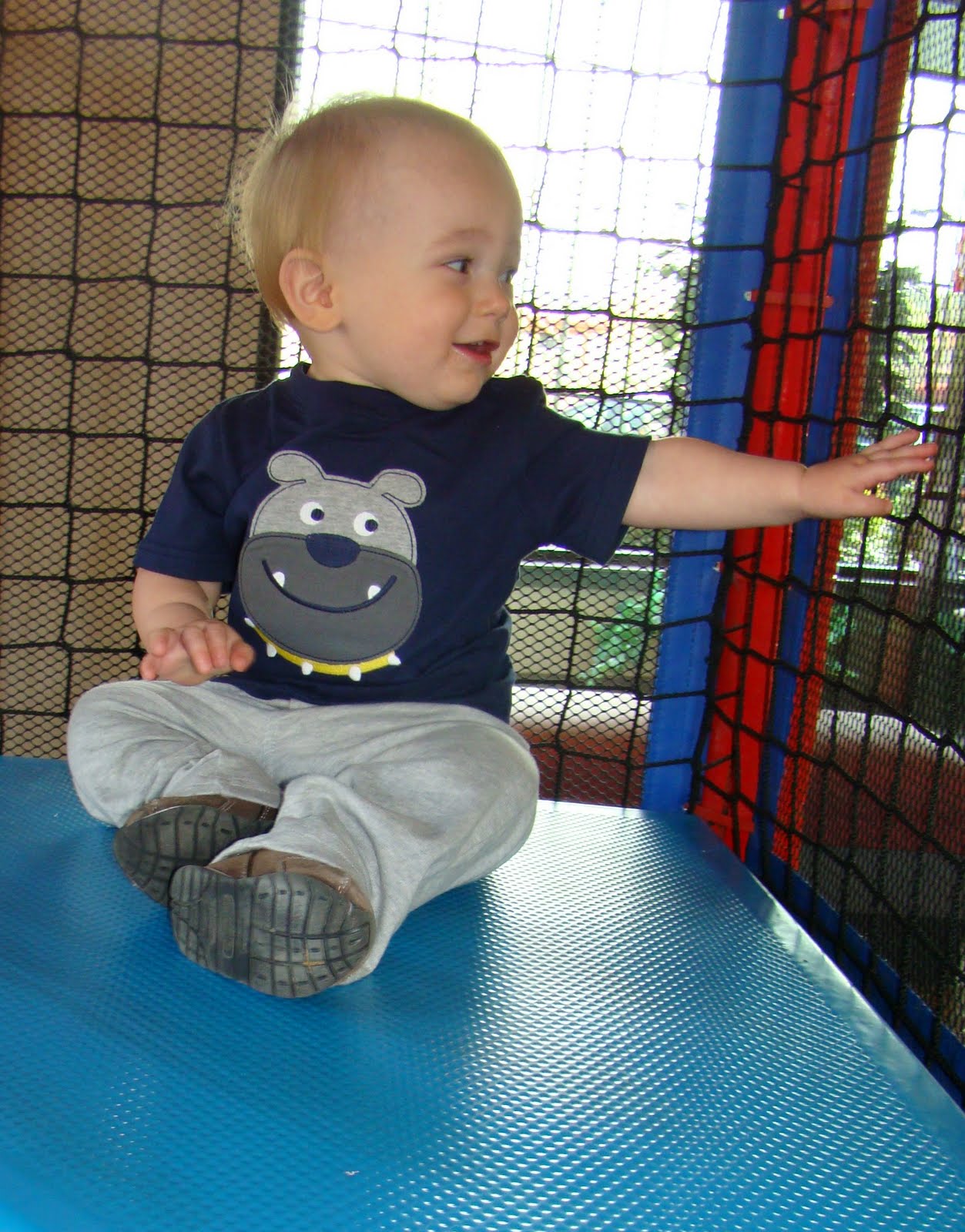 playing in the tunnel 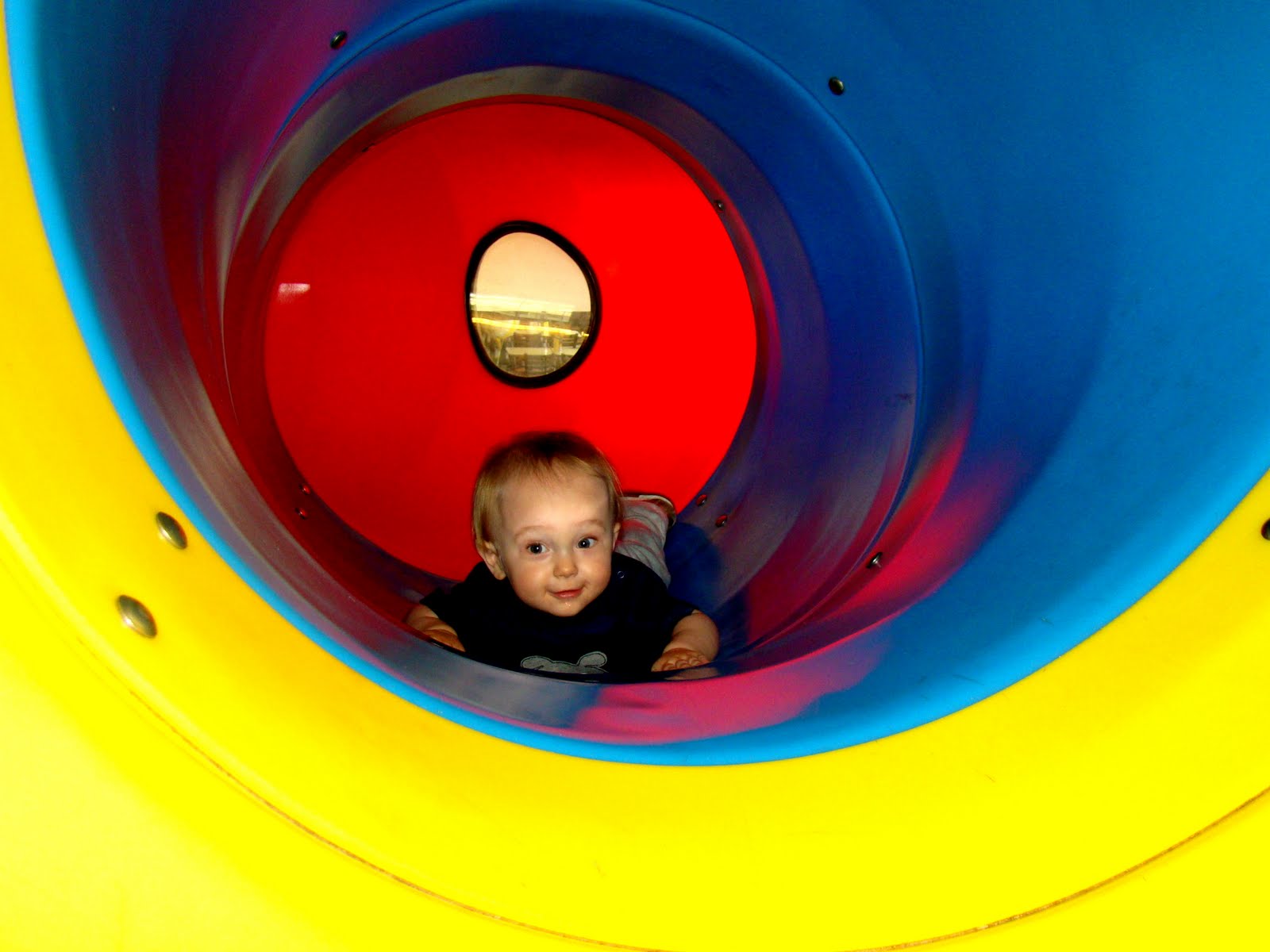 not too sure about the slide 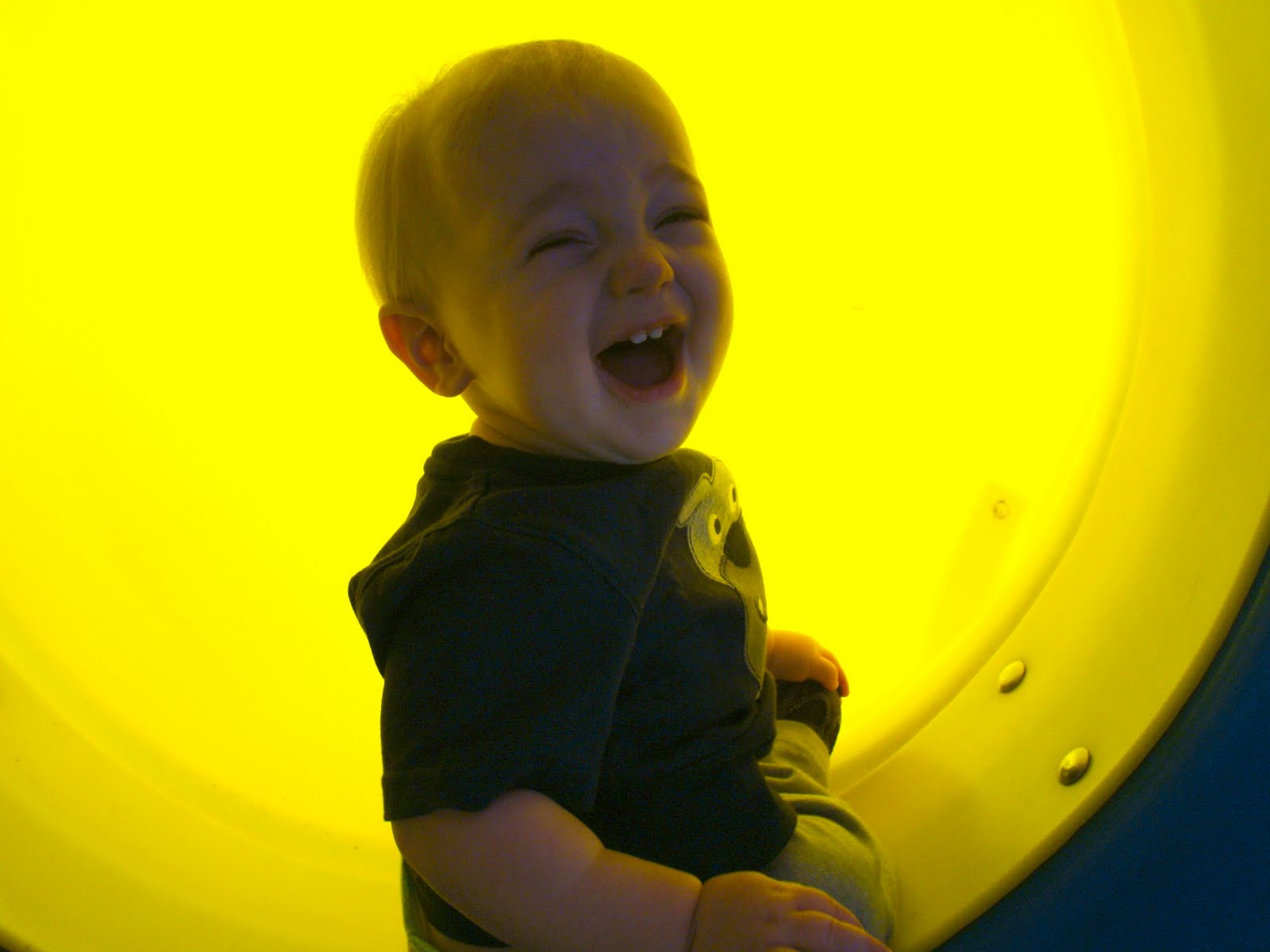 It was funny to watch Zach playing with Kye in the playground as it’s build very narrow. He had to squeeze through all the little steps haha. When it was my turn to play with him I got so nervous! I am not a big heights fan and it was so high!!! I was thankful that Kye spent most of my playtime with him in this little spaceship looking room where he could see out. He is obsessed with cars right now and he just sat there watching them all drive by and said “car car” over and over. Here’s a video of it! 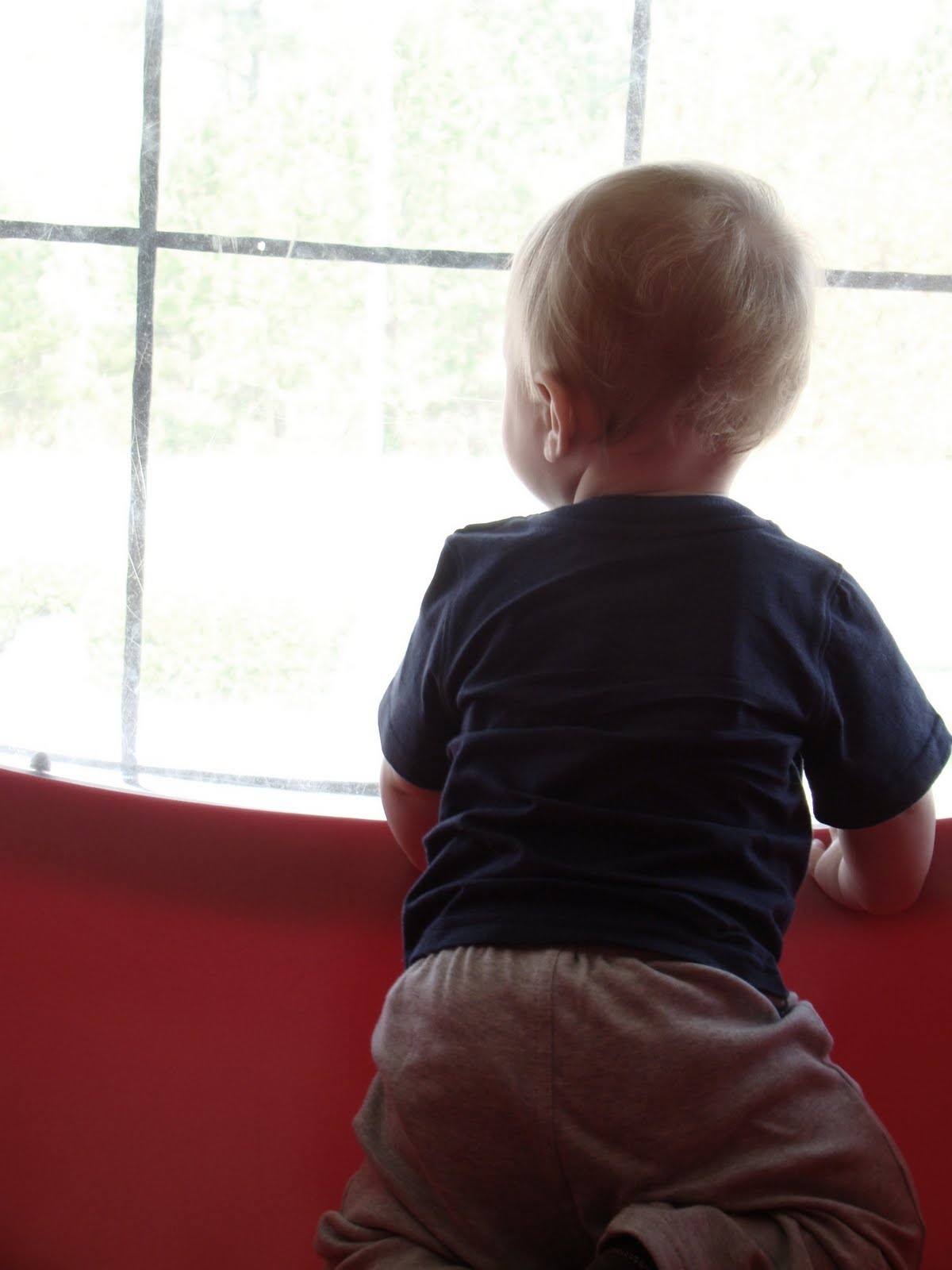 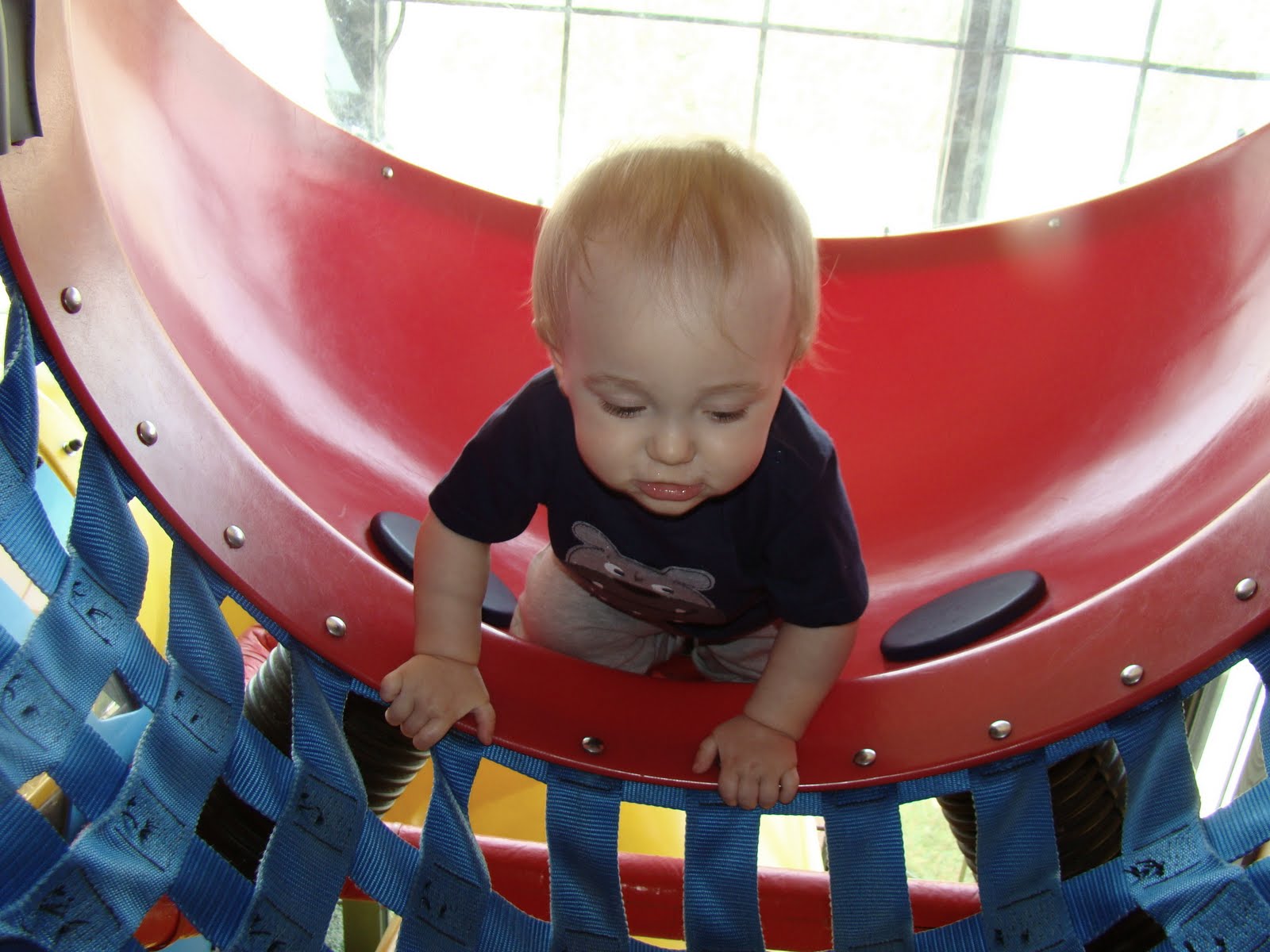 One great thing about Chick-Fil-A too is their menu! I’ve never ordered a meal for Kye when we eat out before but I did there! Since we weren’t sure what the plans were I wanted to have him some dinner just in case and so I ordered him a kids meal but they grilled the chicken for me! And they had this carrot and raisin salad thing that Kye LOVED. Plus the “toys” was a Vegetales cd and, other than Your Baby Can Read, the one Vegetales movie we have is the only thing we let Kye watch! The only downside was that they didn’t have whole milk so I had to get an apple juice instead which, of course, I’ve still yet to let him drink.

Kye got sick of the playground before it was actually time to go so we took him out in an empty parking lot to let him play. I got him a free balloon (another Chick-Fil-A perk!) but he popped it right away! I jumped about a mile b/c it scared me but not Kye haha! We brought along his push truck thinking it’d be a good way for him to get out his energy so we let him push it around the parking lot. He wasn’t too interested though! 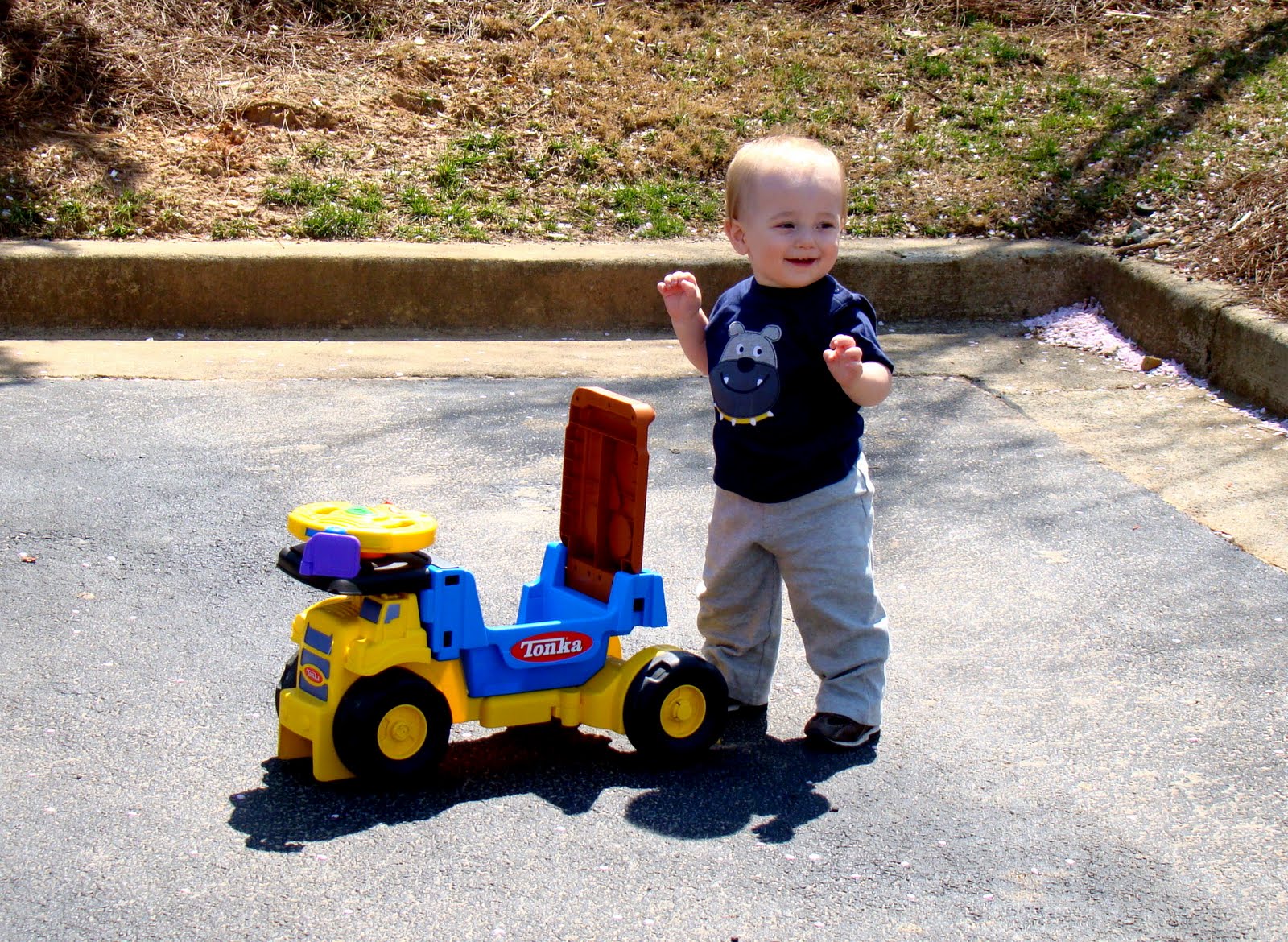 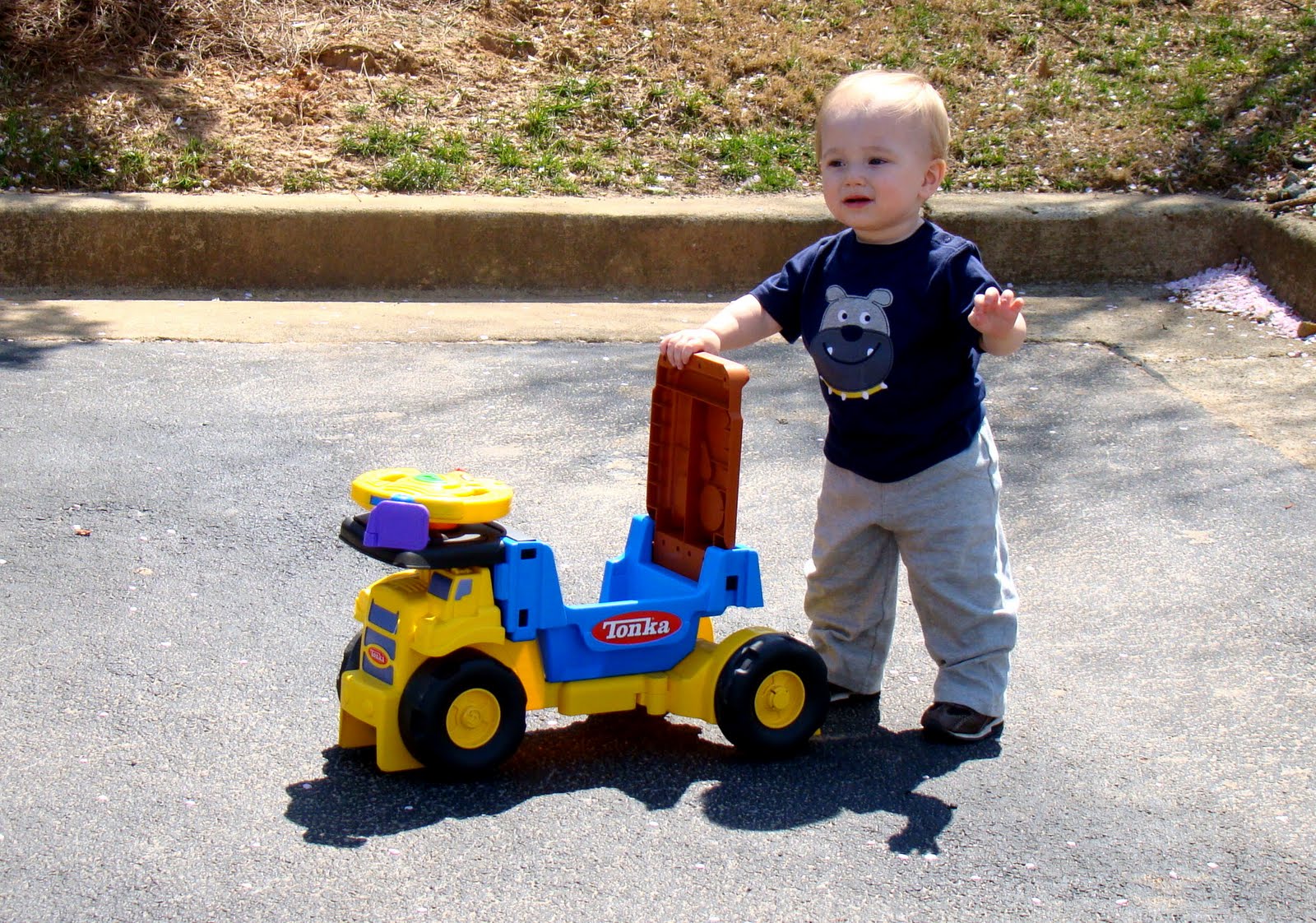 he was more into the little pepples on the ground! 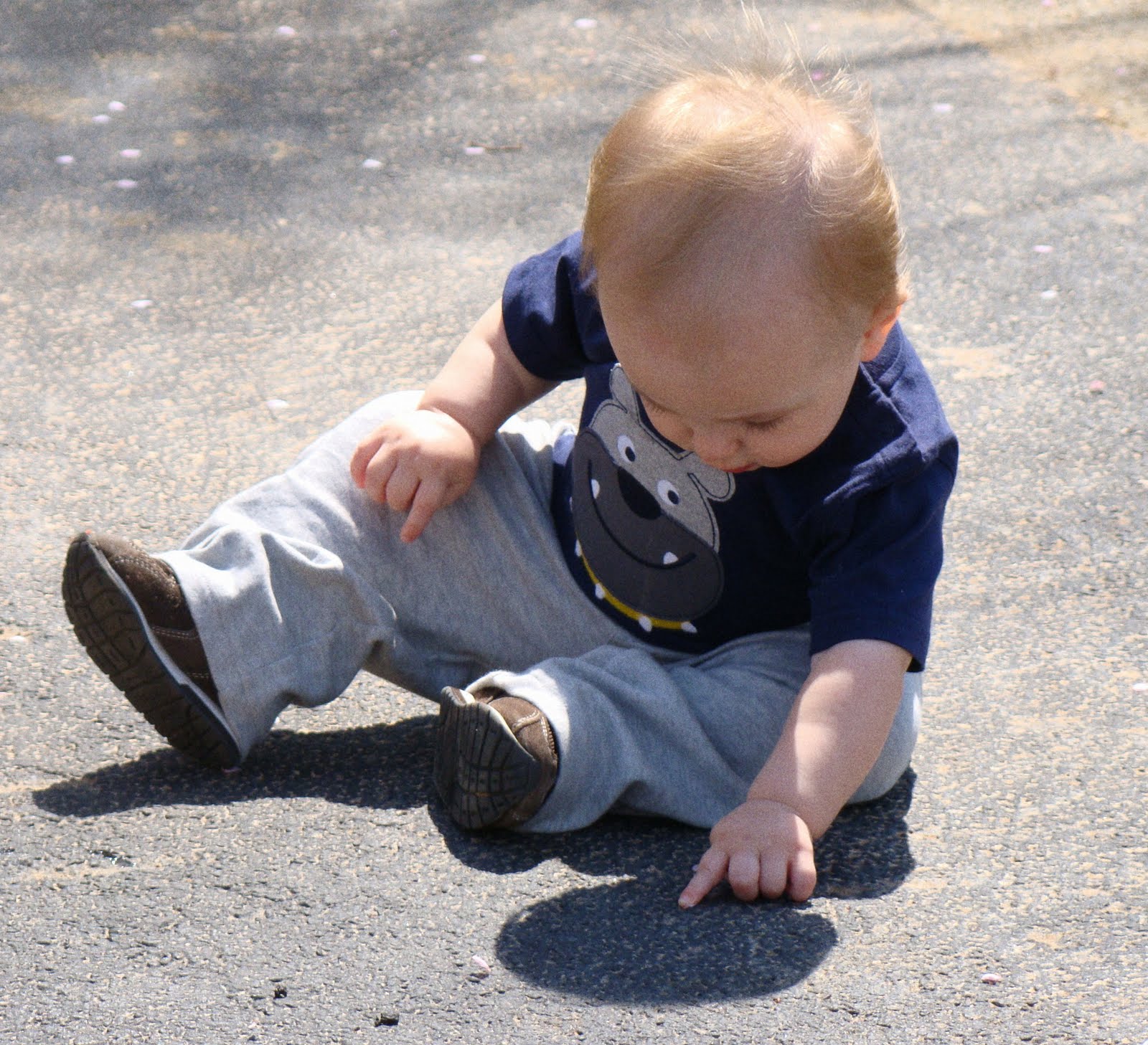 Overall I don’t think the trip could have gone any better. He was awake the first hour and he did fine playing with his toys and such. Then he slept great and I fed him lunch in the car before we stopped to play. After we played so hard he fell asleep no problem and woke up about 30 minutes before we got there so we just played his Vegetales movie for him and he was good to go!

The ride home went even better as we didn’t leave the family until 5:30! So I just sat back in the back with him and fed him his dinner then we stopped at 7 to change him into his night time diaper and pjs. He slept the rest of the way! Of course it wasn’t good sleep and he was exhausted the next day but it did make for an easier trip!!!

I feel confident now that Zach and I could for SURE make another trip that long again with him. I think we could probably go up to 8 hours as the stopping to let him play for a couple hours really helped. I do think it’s easier to travel with him at night when he’s asleep but it is hard on us to get home so late! I also felt guilt about him not getting quality sleep (although he took some hardcore naps the next day which I enjoyed for sure!) Zach and I would LOVE to take a trip to Maine but I just can’t see us making that drive for a LONG time. It’s a 24 hour drive so that means 2 days in the car! We’d have to drive at night and take turns or something! At least we got this one down and we’ll be testing it all out again in November when we go to visit Zach’s grandpa in South Carolina!