The morning after Disney was our Christmas morning together. I know we’re strange to have our Christmas celebration so early and so secluded but I LOVE it. It allows us to spend quality time together and to be able to just focus all our attention on Kye for real Christmas.

This year with ALL the stress I didn’t wrap everyone elses gifts as pretty as I did Zach’s…I skipped bows and cute paper but as long as his looked good that’s what counts right?

Can you tell which ones I wrapped? 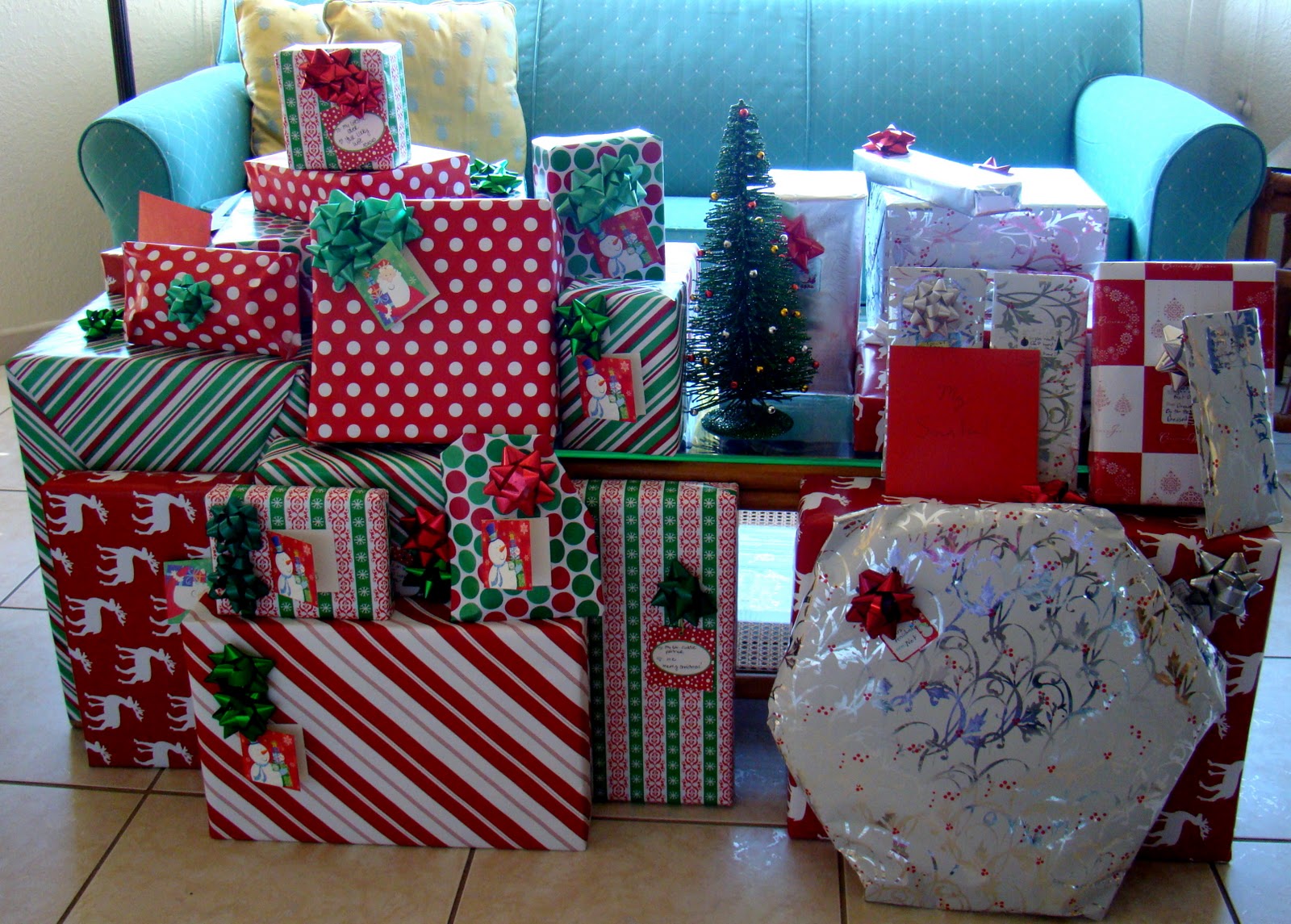 Zach with the presents he got me 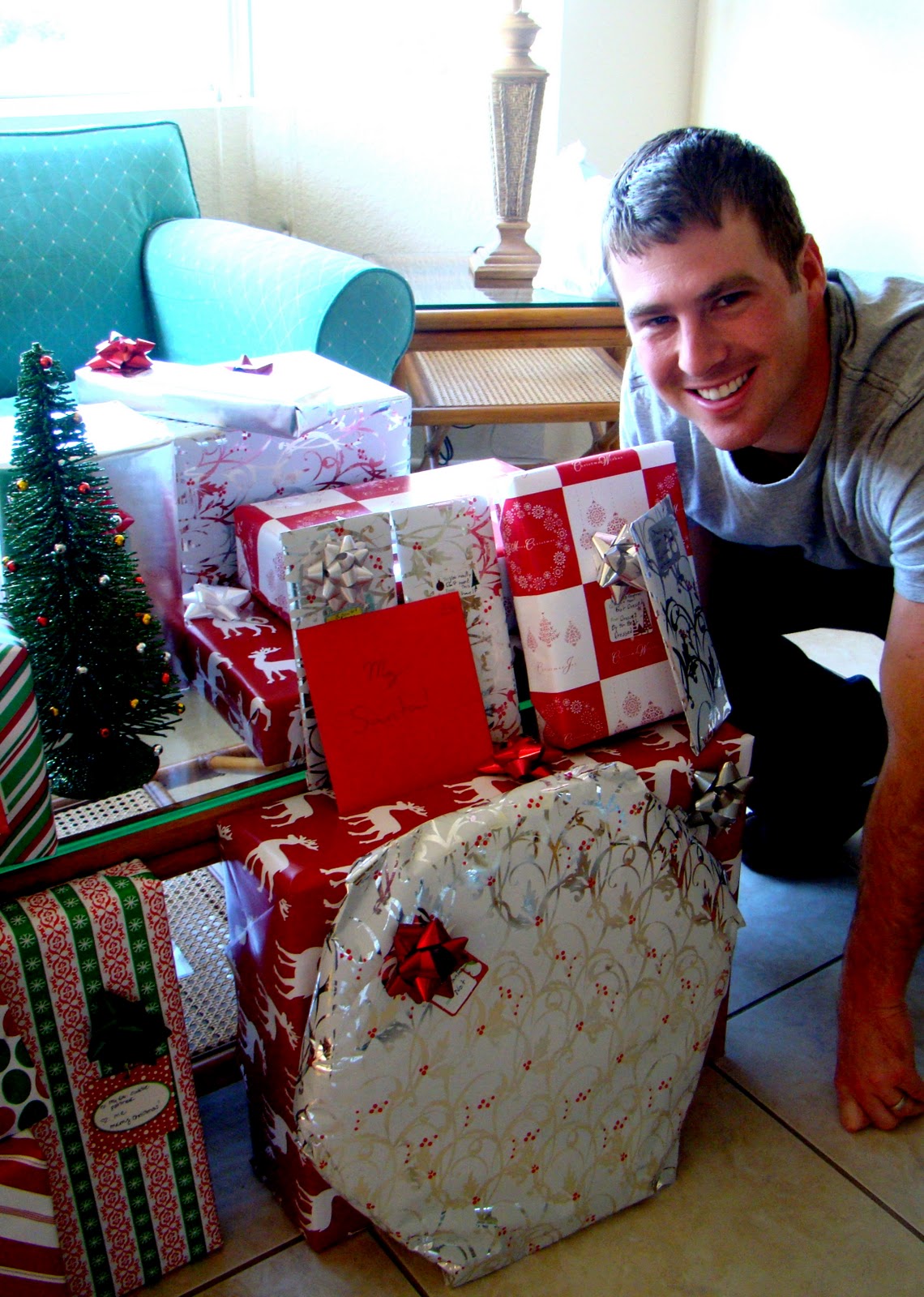 And the ones I got him 🙂 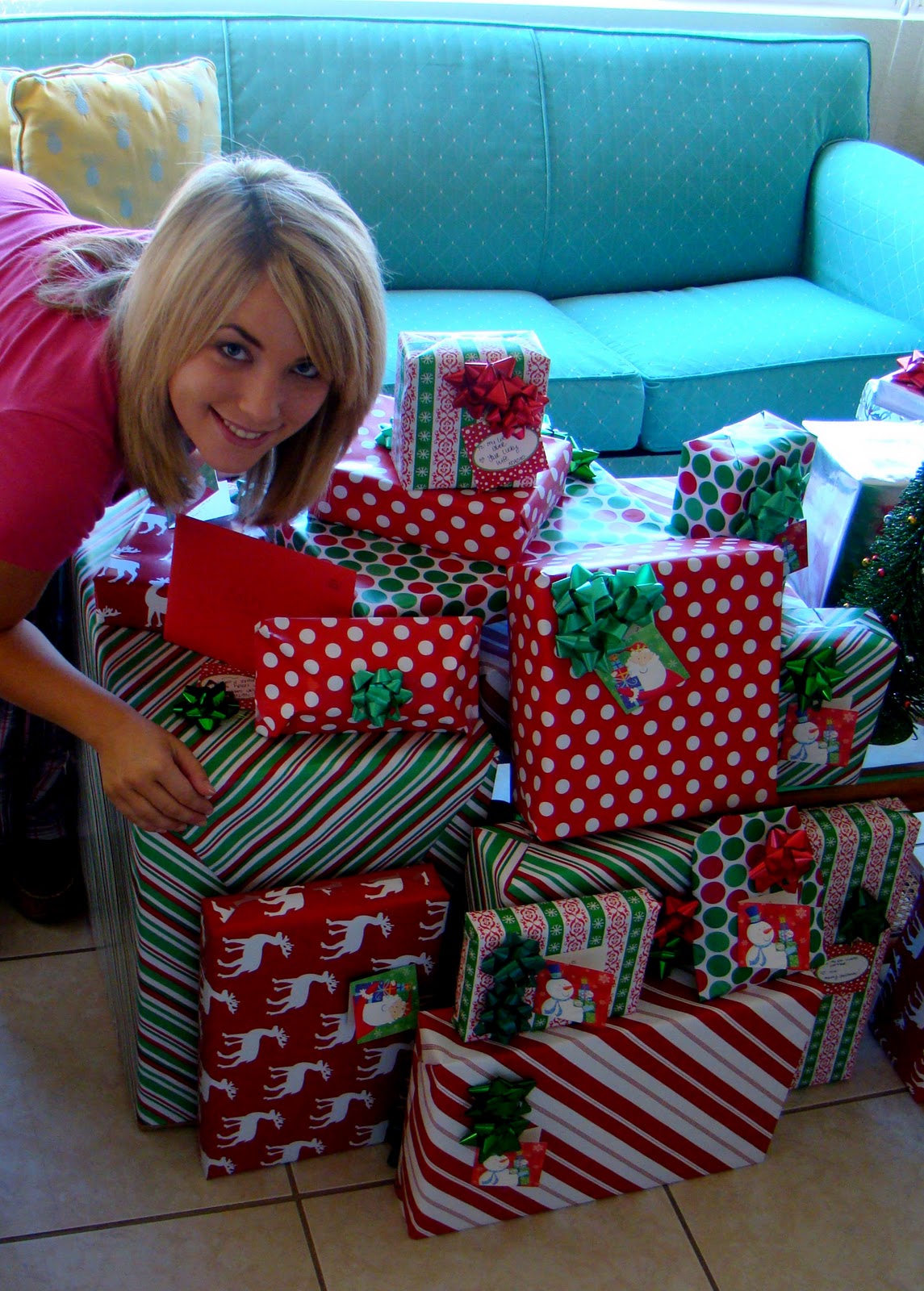 We were disappointed that we couldn’t find our ipod stereo so we could listen to our Christmas music but we ended up paying for internet access in the room ($10 a day…RIP OFF) so we could at least use Pandora. It was a GREAT mix of music but annoying that it had commercials. We just took our time, opened gifts, and enjoyed each others company! Here’s the highlights of our present opening: 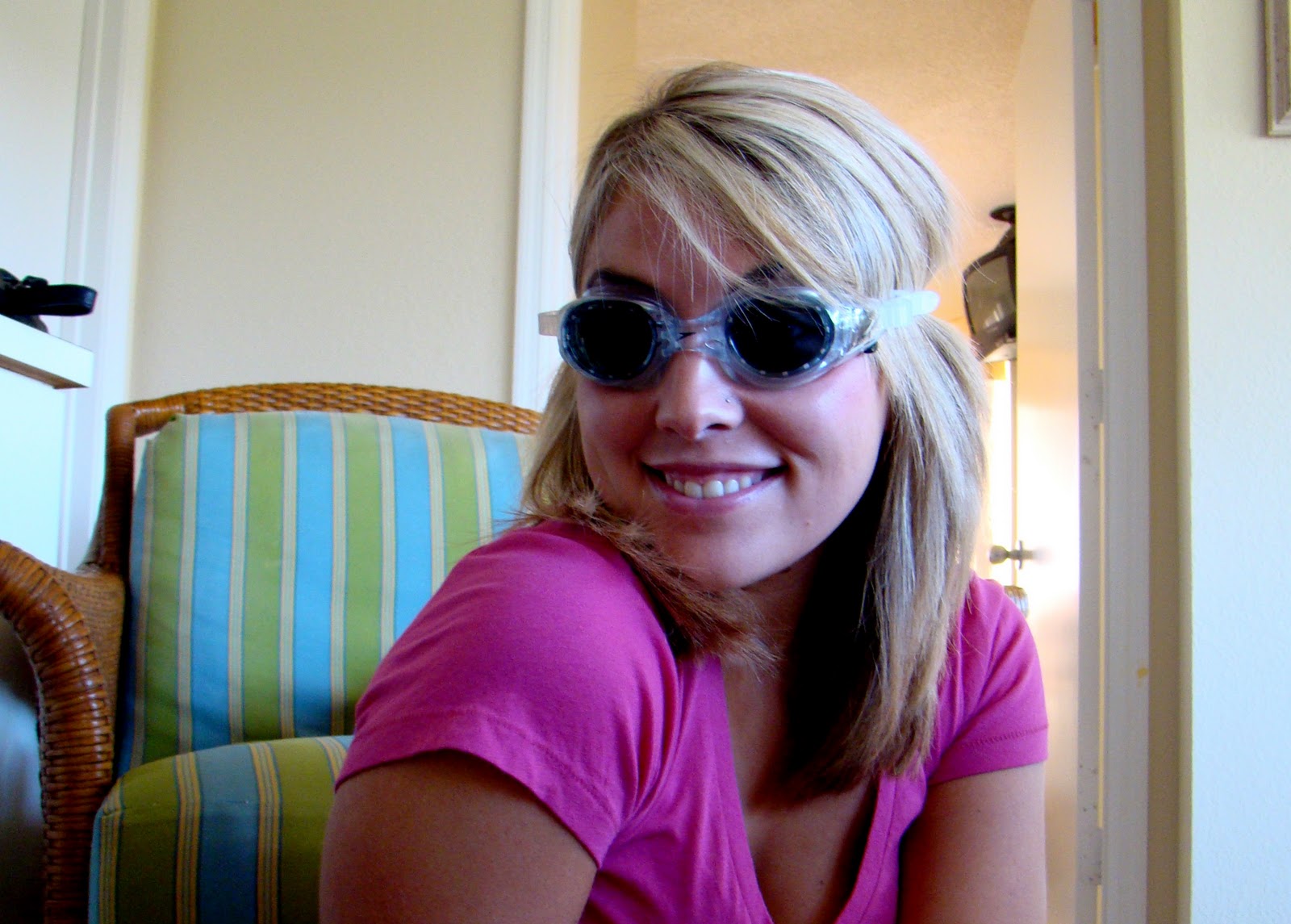 I know this is random but I have a “thing” for collarbones. I just love them and LOVE when necklaces hit right at the bone. I think it’s just sexy for some reason! I used to watch Private Practice but quit watching it after I realized I spent more time checking out all the jewelry the characters wore more than I paid attention to the story line. I saw on a friend’s facebook (thanks Larissa!) that she had a pretty angel wing necklace that hit at the exact spot I want one to hit so I asked her where she got it and discovered a new favorite website: www.dogeared.com Casey’s boyfriend, Jordan, actually got her one for her birthday and I’m excited that I get to join the club! I sent Zach a bunch of ones I liked and wanted him to pick out one that he thought was meaningful and I love it!

each necklace has a different meaning 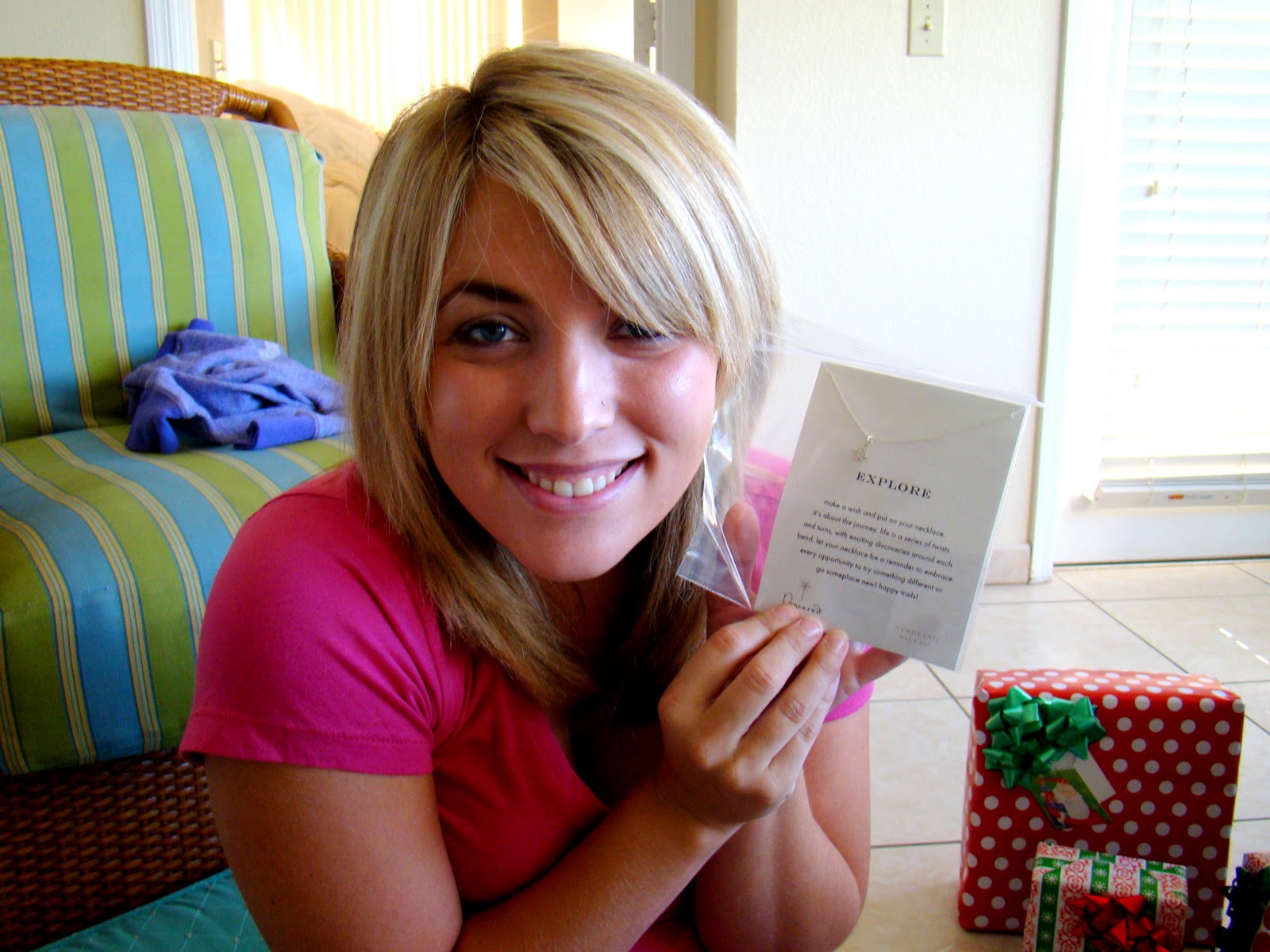 he got me a compass since (duh) I LOVE to travel! 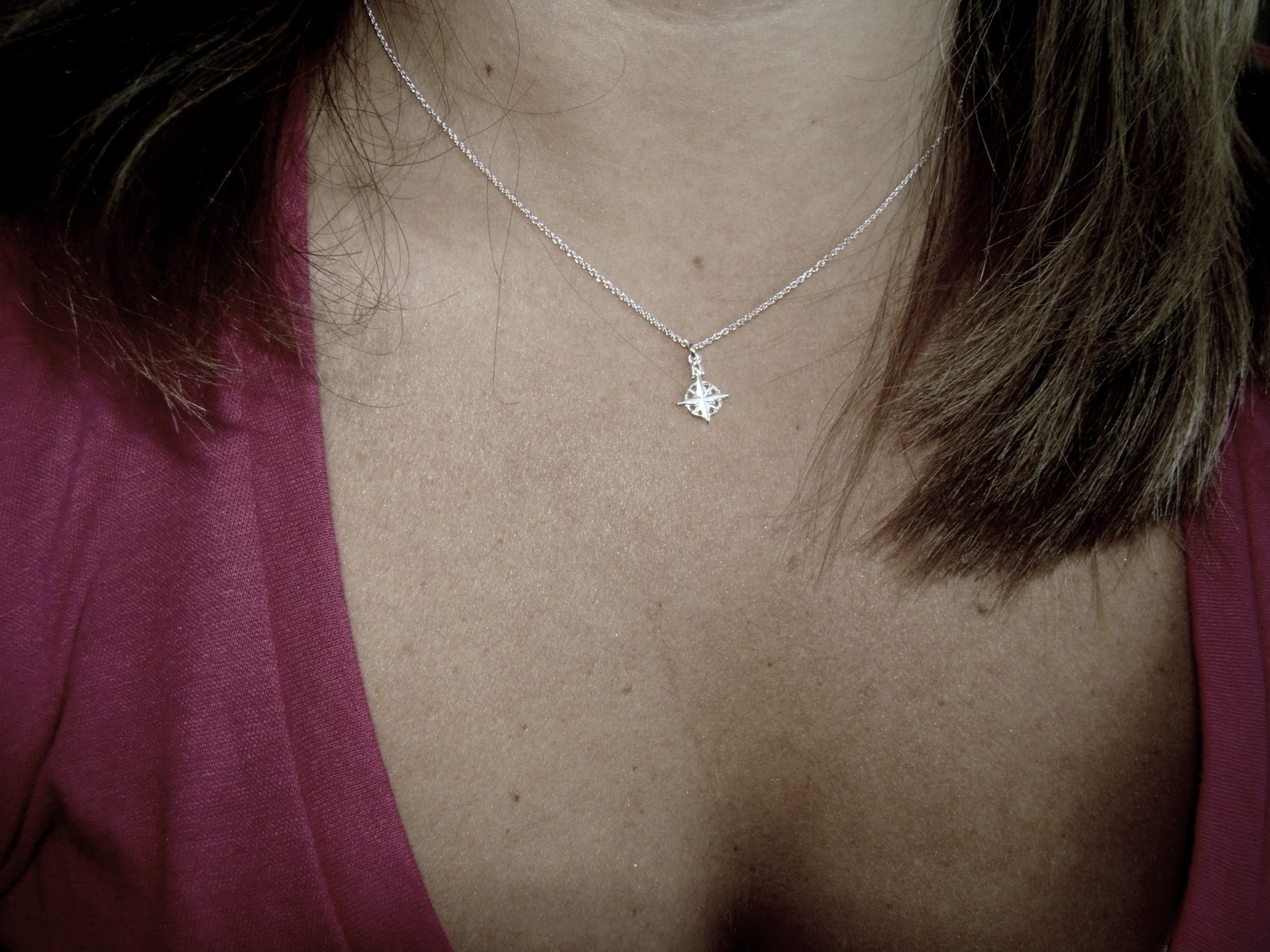 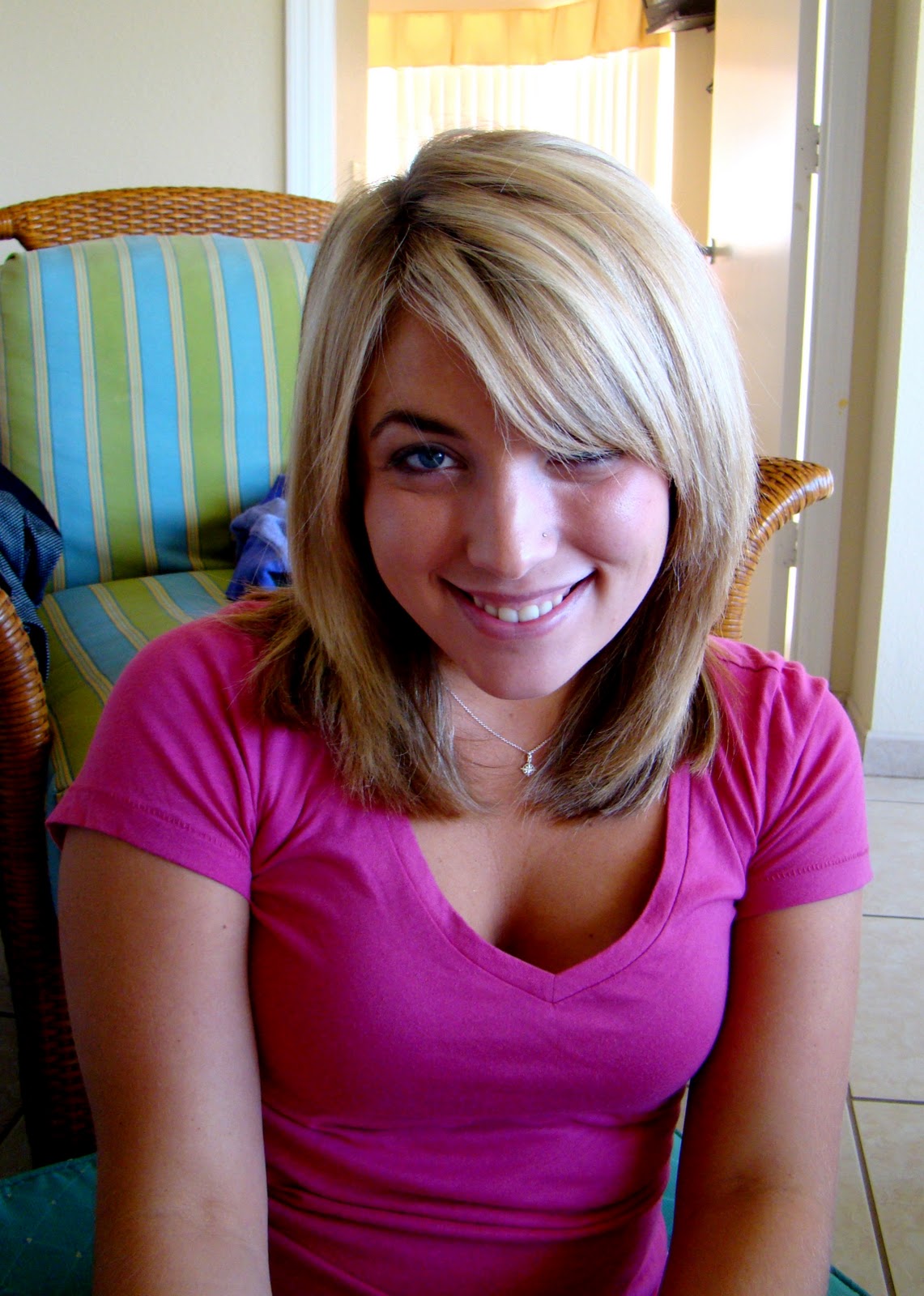 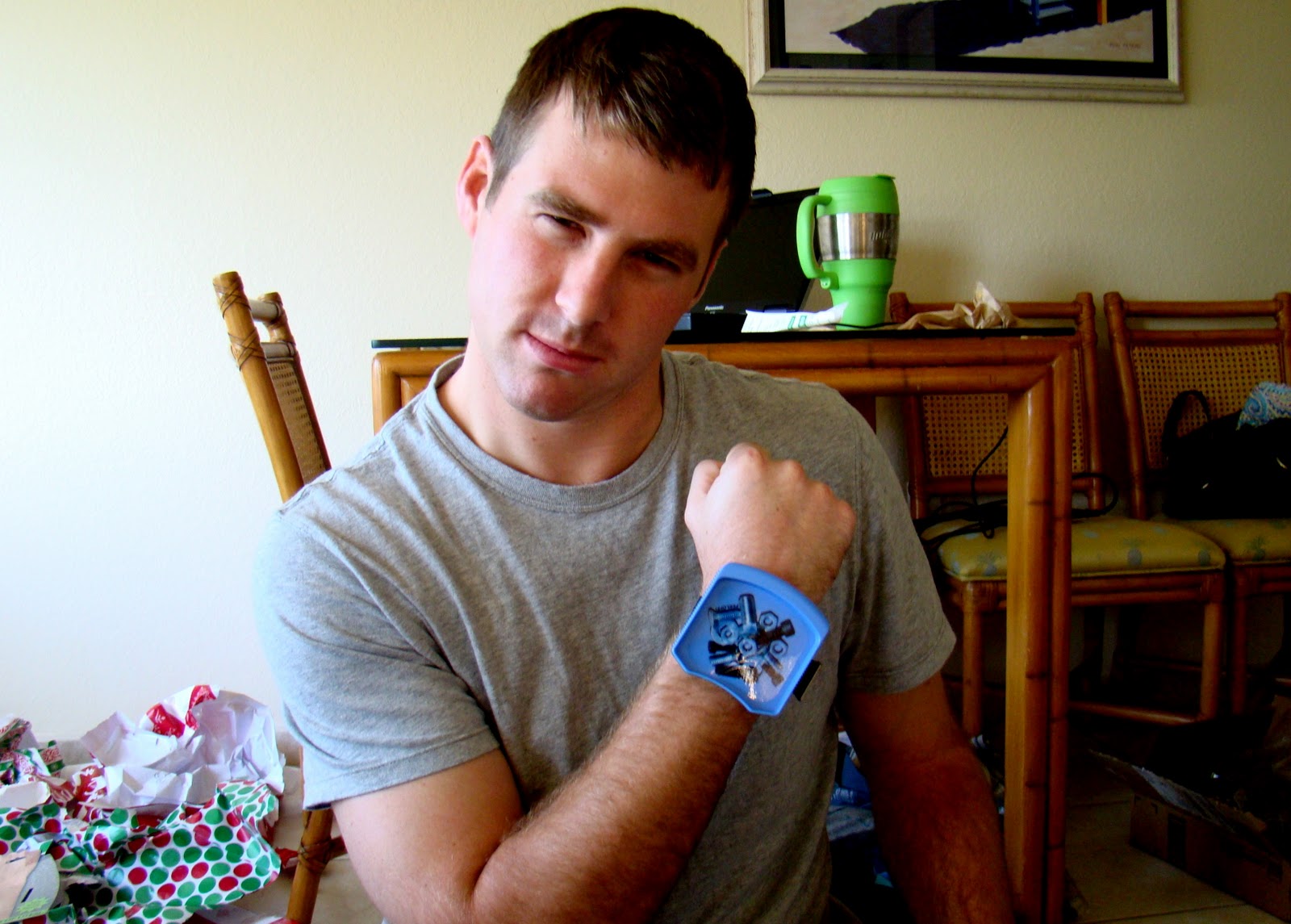 ready for some laying out! 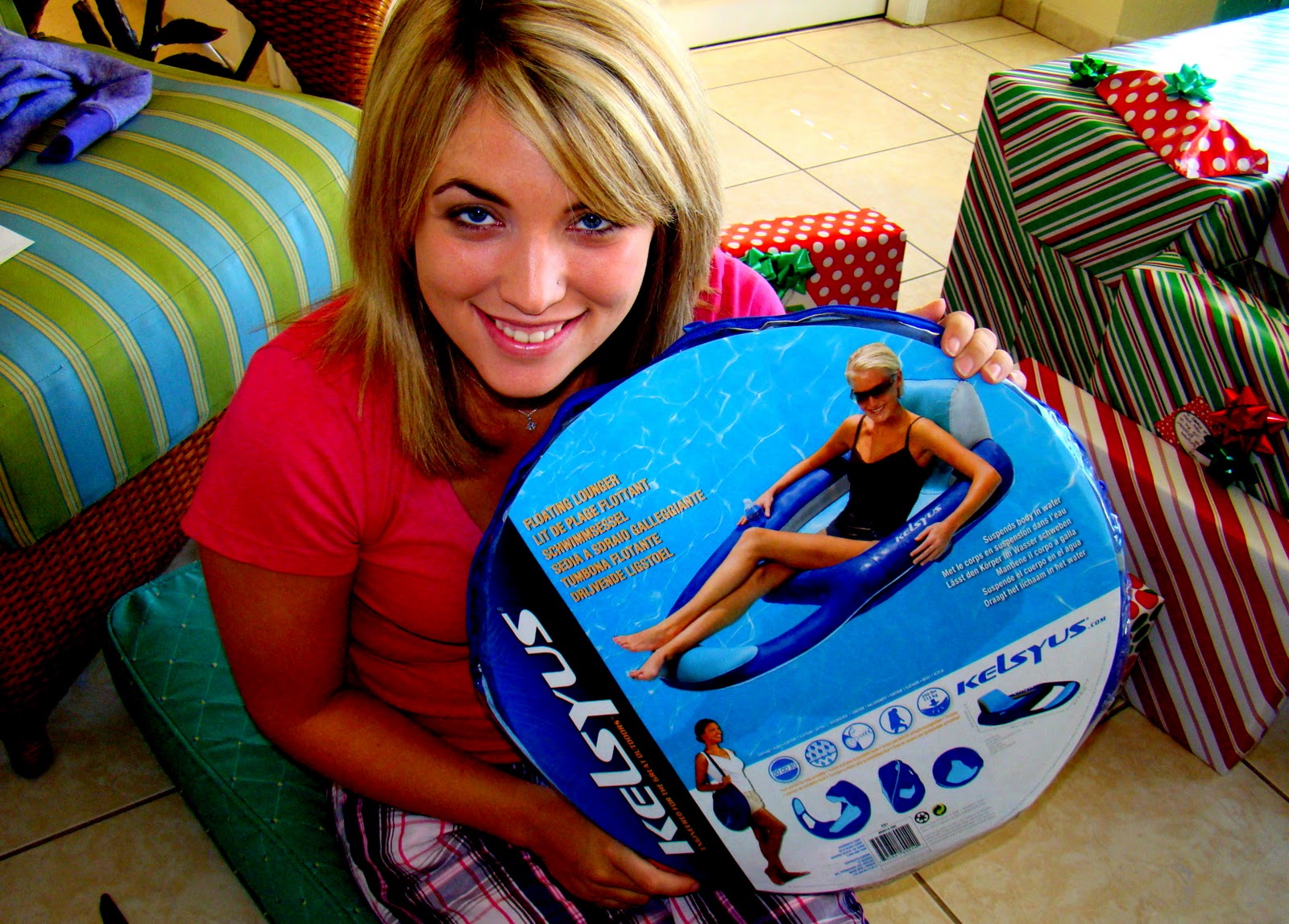 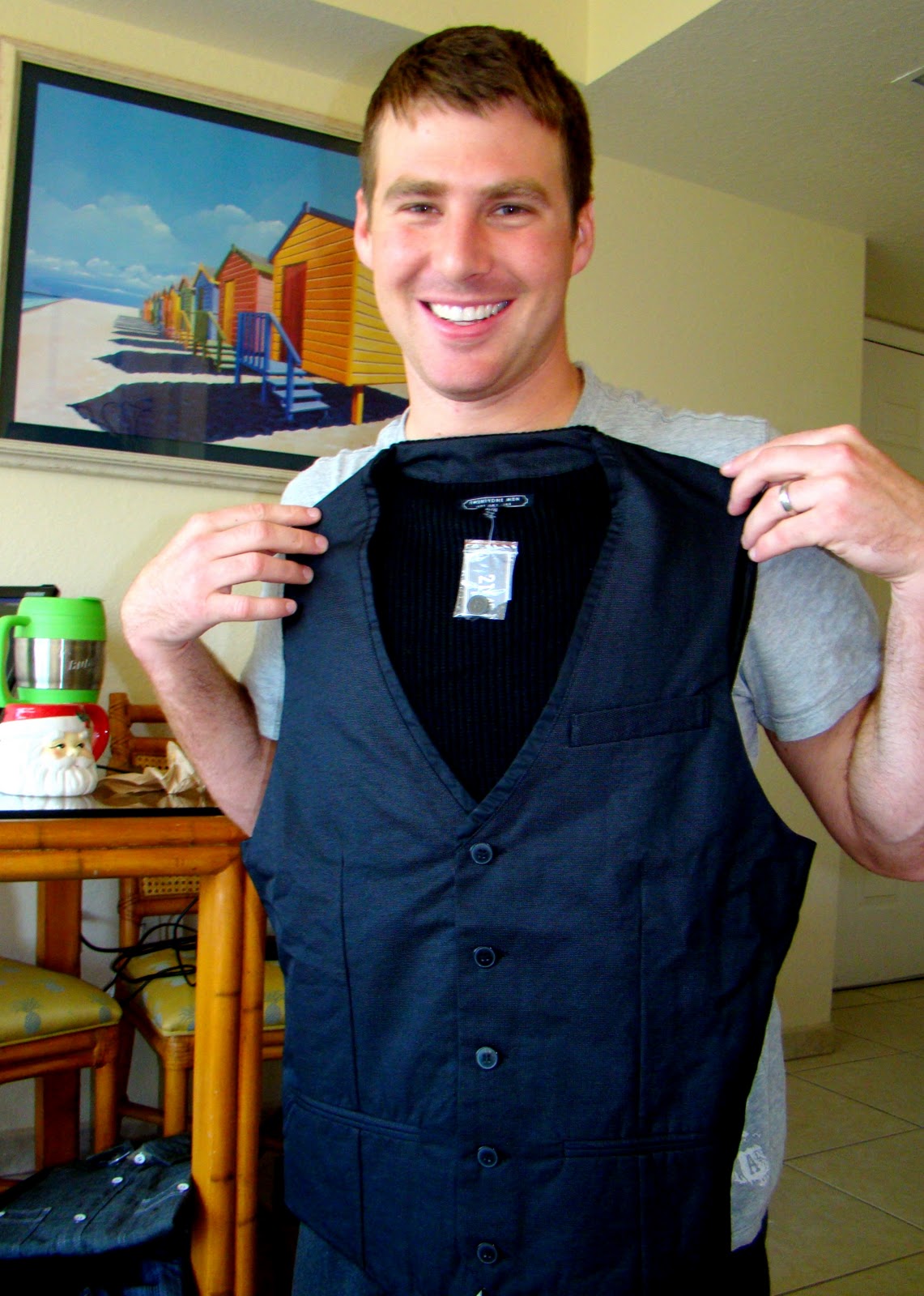 Yes, I bought CROCS! They are cool looking though huh? 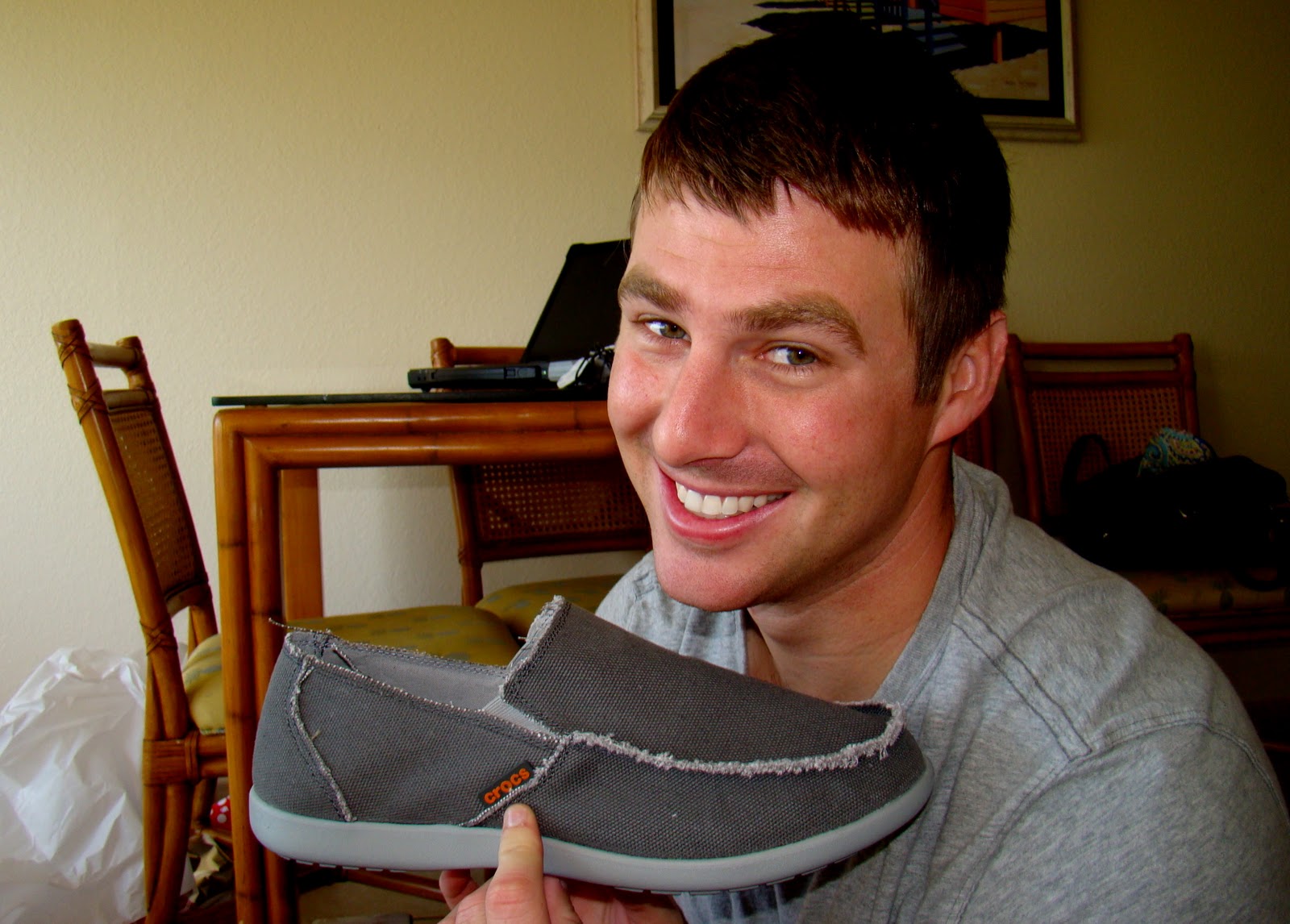 I know this may offend some people and I’m not trying to hurt feelings but I have to be honest: I have always thought that Build-A-Bears are such dumb gifts. The fun in a Build-A-Bear is actually building the bear…and someone giving it as a gift is like they got the fun in it and you just get the bear. It’s kinda like when people give puppies as pets. Isn’t the best part of getting a new pet getting to pick it out and make it your own? Same concept as the Build-A-Bear to me. So Zach told me my next gift was his favorite present but that I wouldn’t like it.

Yup, he made me a Build-A-Bear. 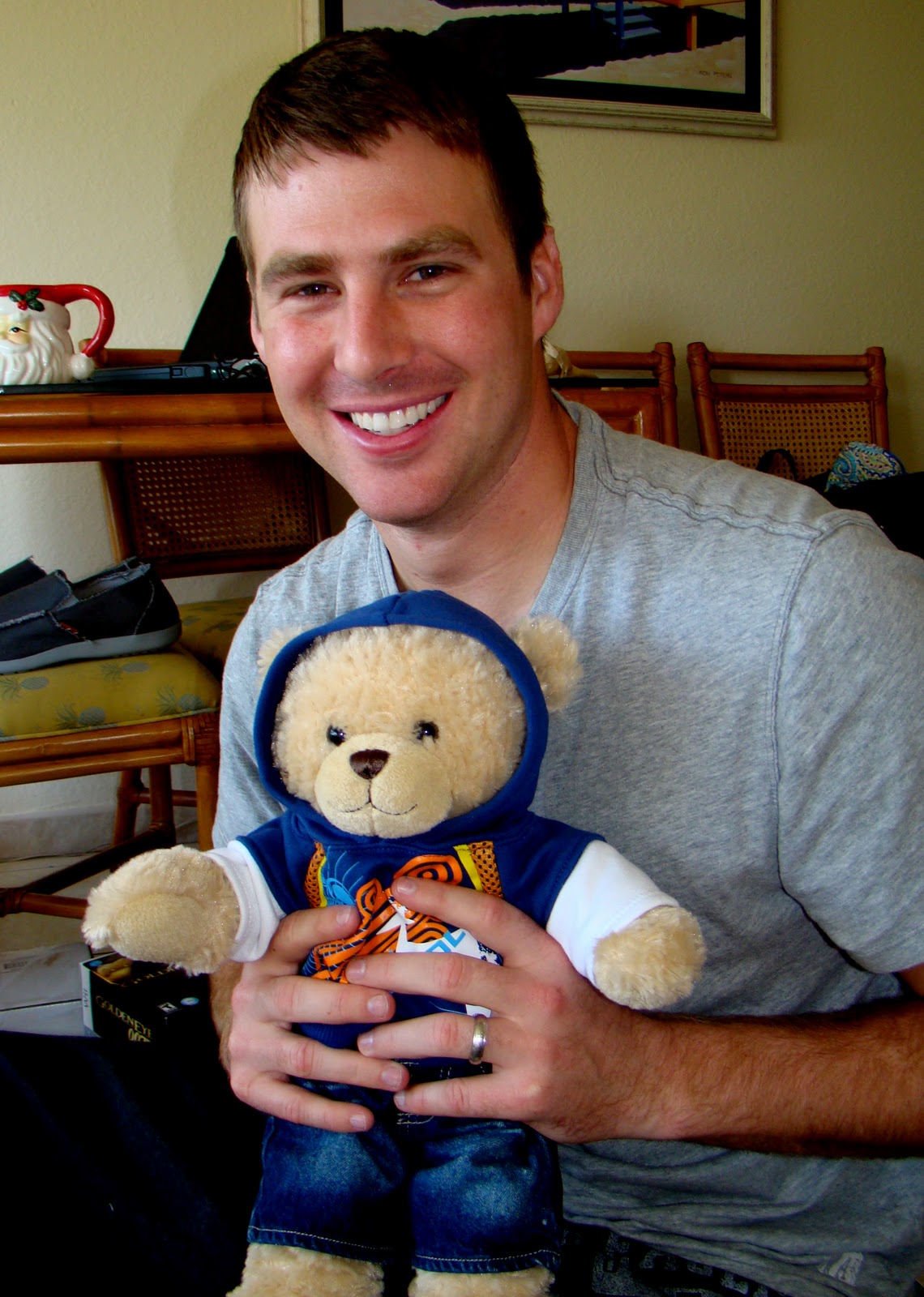 His reasoning behind it is actually because he’s jealous of my childhood stuffed animal: Deh-doh (totally guessing on the spelling of that). It’s a rabbit I’ve had since I was super young and I always grew up sleeping with. Once I got married I obviously don’t sleep with it anymore (not like Danielle and her sleepies haha) but when he goes out of town or we’re fighting I pull him out and cuddle with him. Zach can’t stand him because one time we played Loaded Questions (a super fun board game btw) and it asked if we could save one THING from a burning house what would we save? Well duh, it said thing so I took that to mean an object and put Deh-doh. Zach put me. Oops.

Anyways, the bear is supposed to be my stand-in Zach to cuddle with when he’s out of town and we decided to name him like we did our cat. We named the cat Zeke b/c it was a name that Zach wanted to name our son and I hated it so I picked a boy name that I really like but Zach hates for the bear: Cohen 🙂 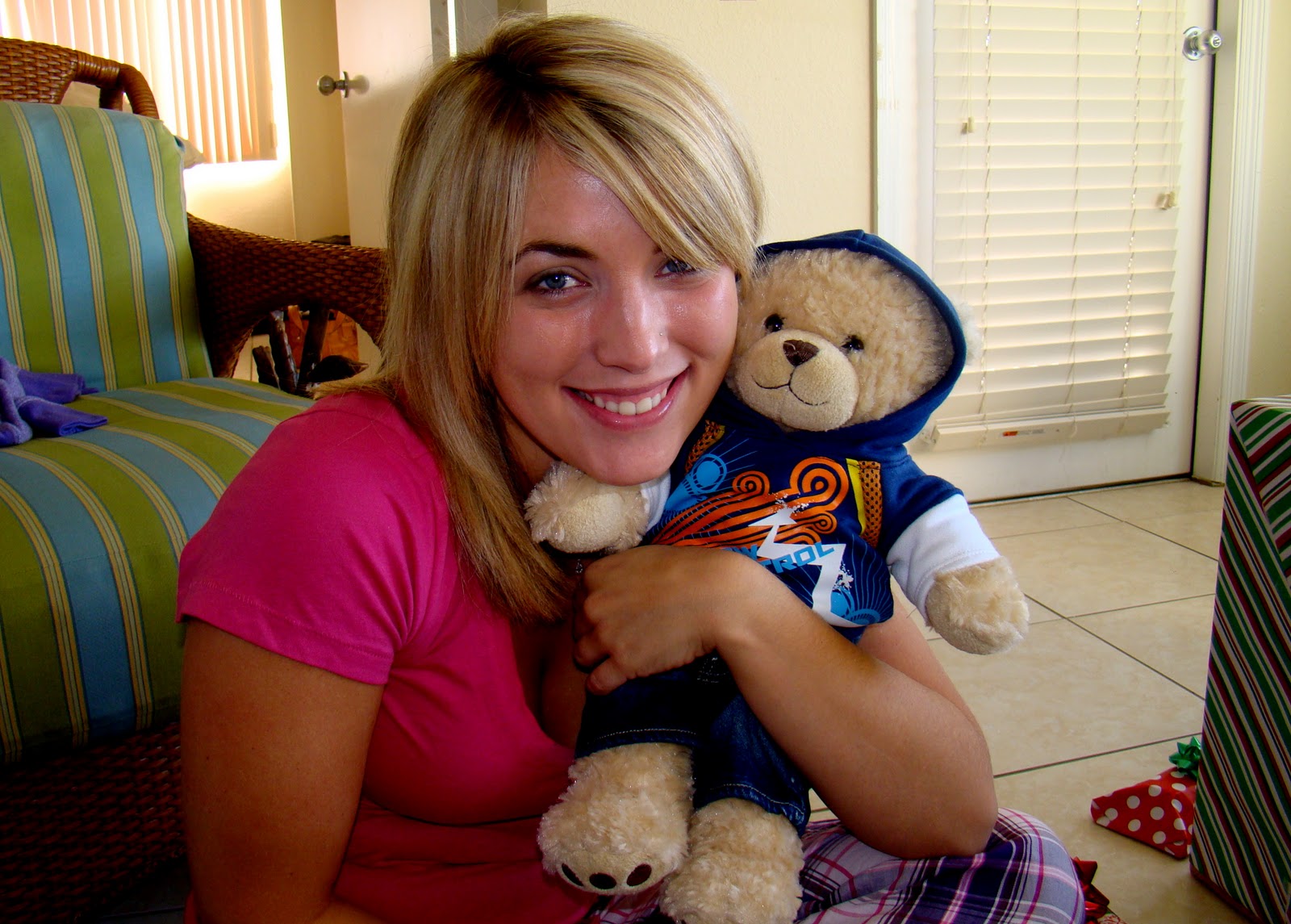 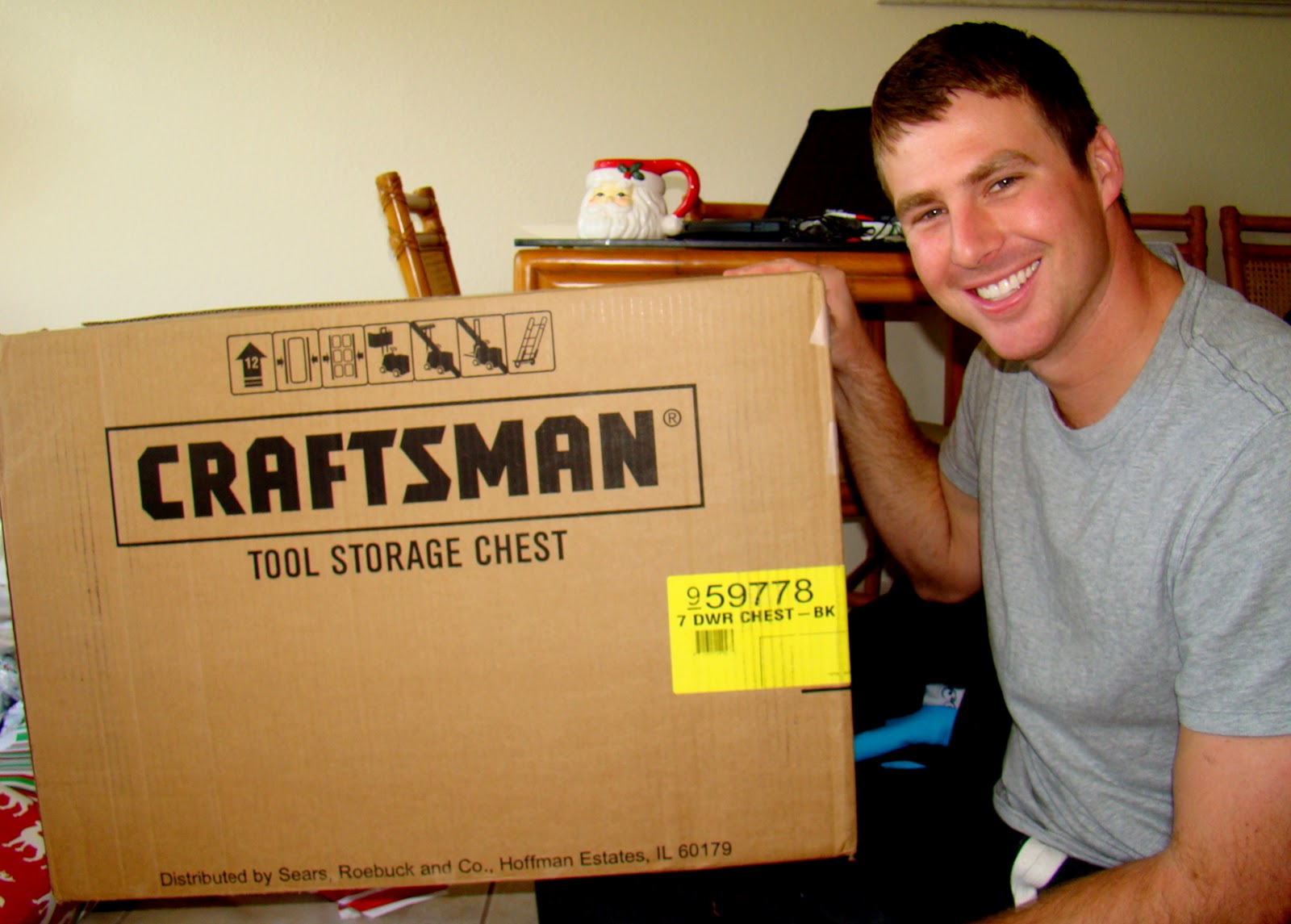 My big present was a new Coach baby bag. Kinda random seeing as I’m not pregnant and my kid is potty trained so I really don’t use baby bags much right now. But it’s black and the one I already have it brown so that’s awesome! I love it and I understand the reason he went ahead and gave it to me. He got it at the outlet on a HUGE sale, too good to resist but too expensive to just sit it in a cabinet and wait until I’m pregnant to give it to me ya know? 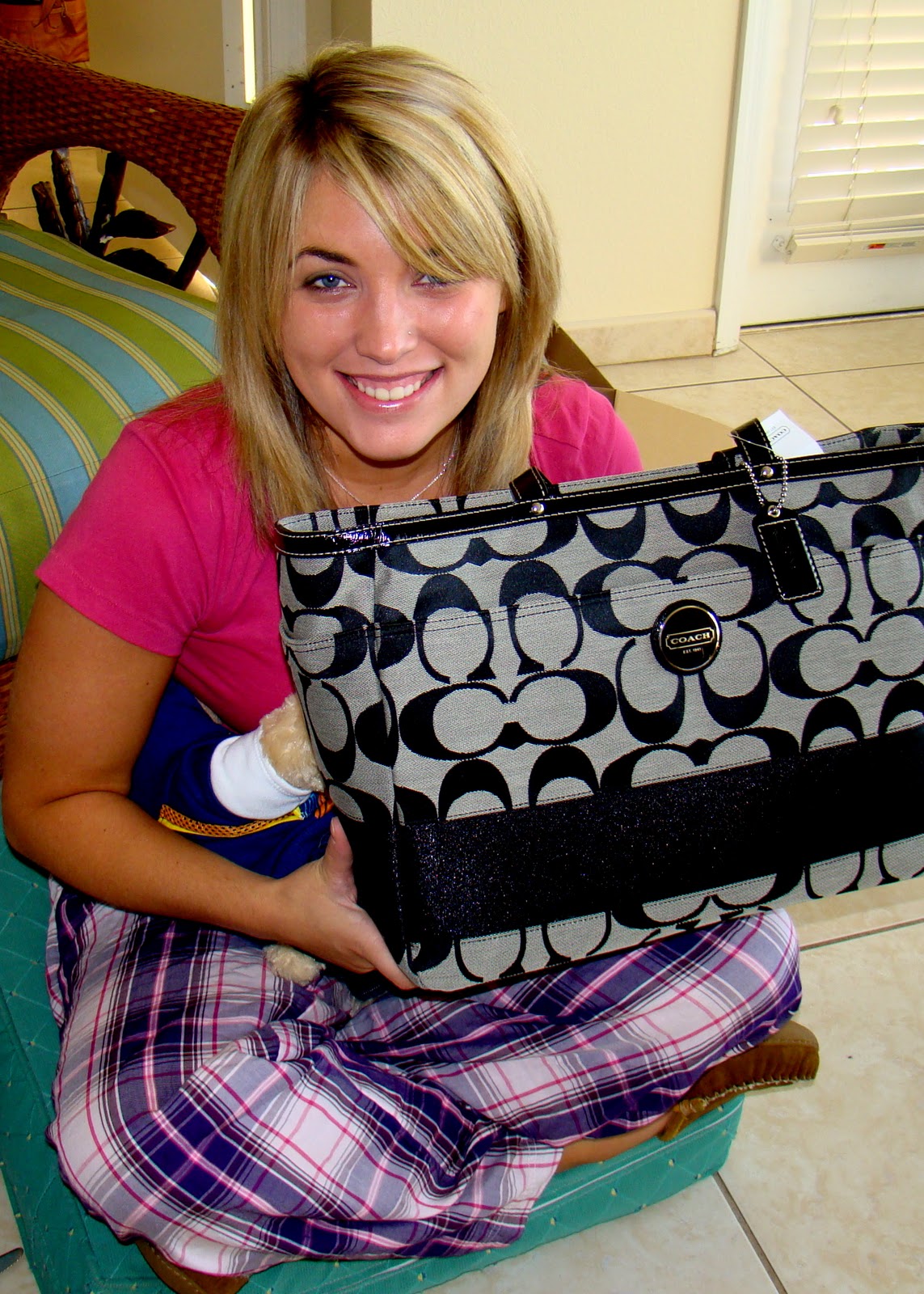 All the presents Zach got! He got hooked up!!! 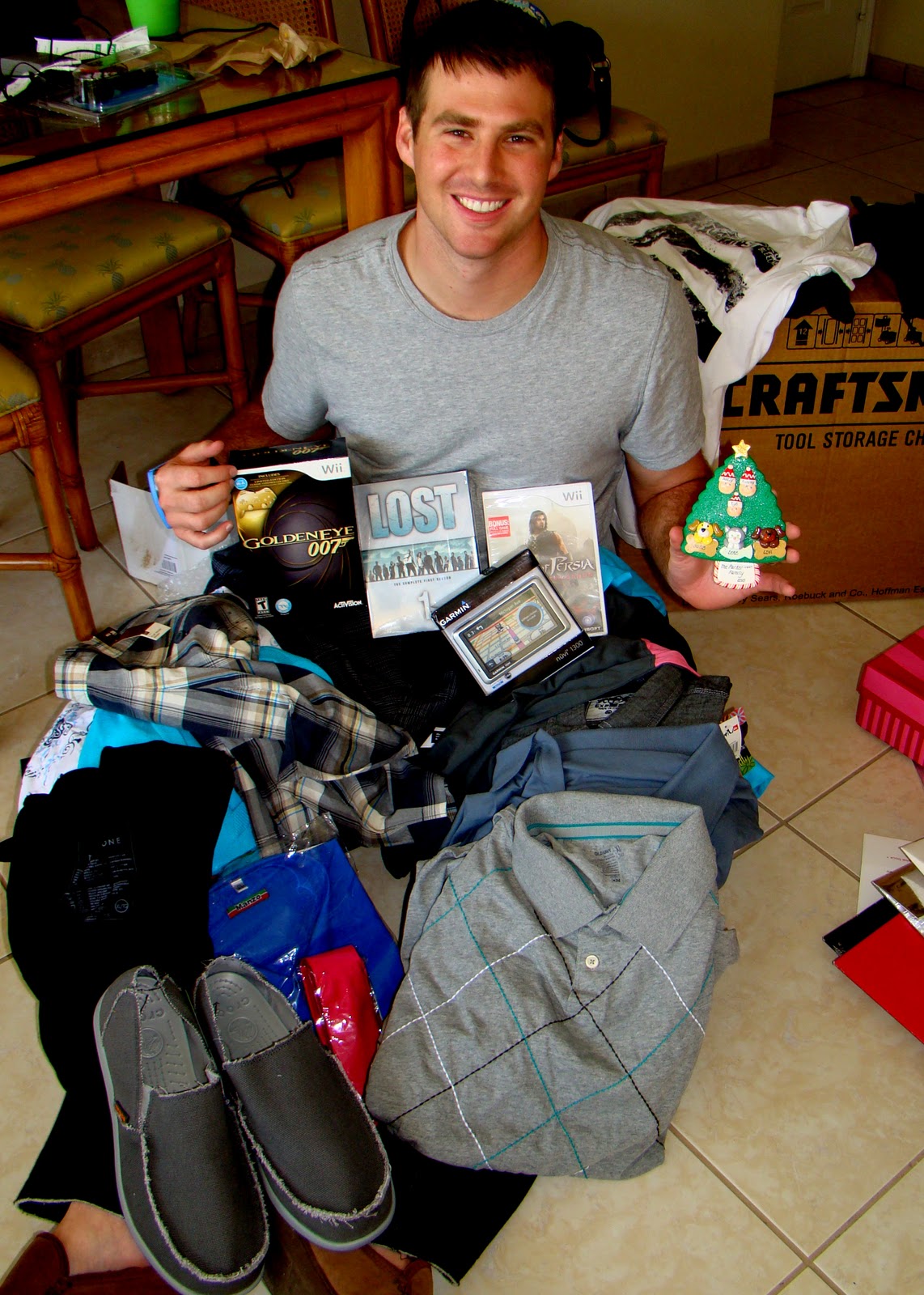 As I was setting up all my presents for my picture Zach said I had one more and it was what I was REALLY hoping for: a new camera!!! It’s a Sony HX1 and it’s awesome! I’m going to be selling my old camera if anyone is interested (it’s a Sony H50). I have 2 of everything (batteries, battery chargers, straps, etc) for it which is a plus and the original box and everything! 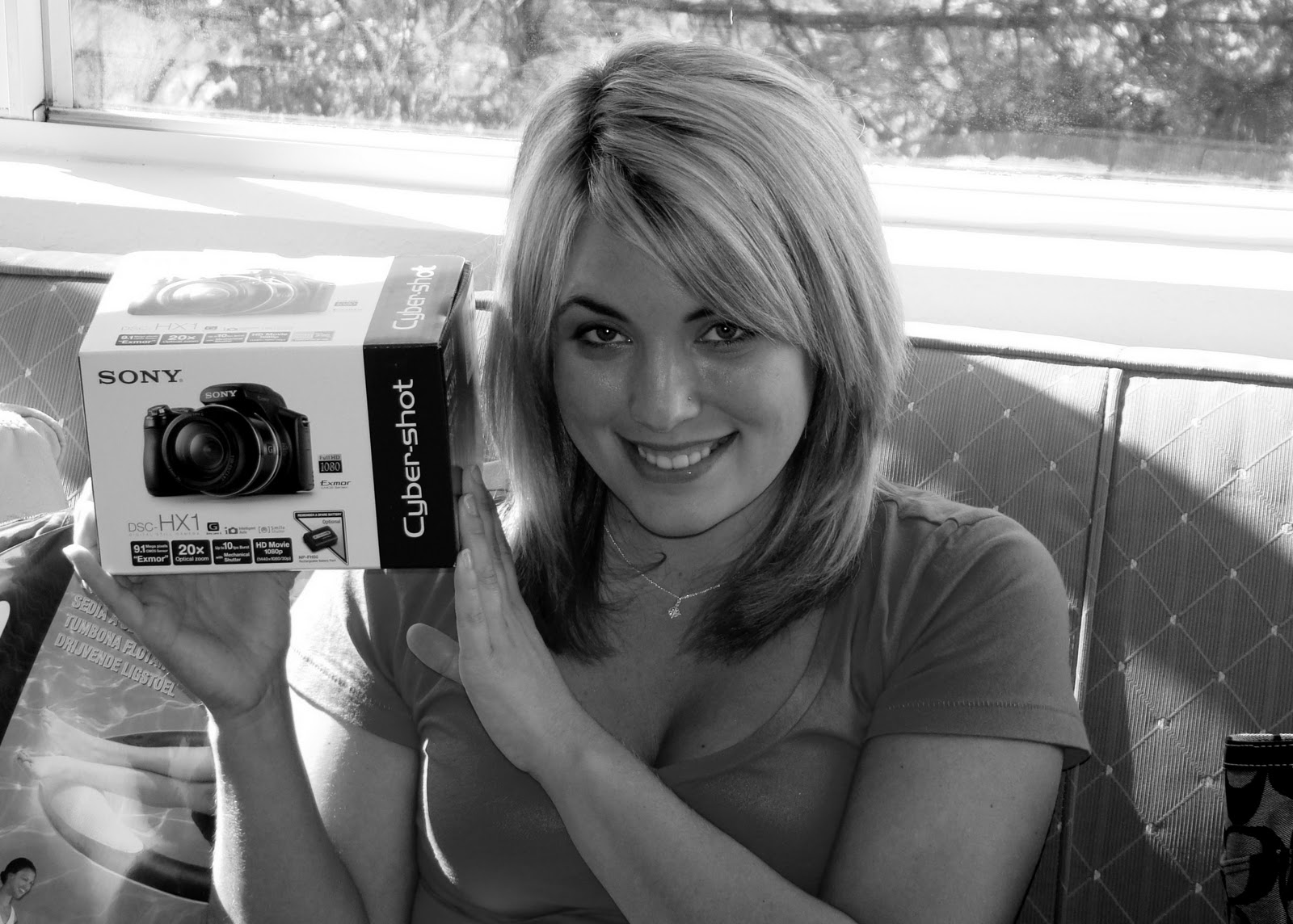 All my gifts (yes, Rachael, the pole thing is that extended tri-pod thing you told me I need from last year!) 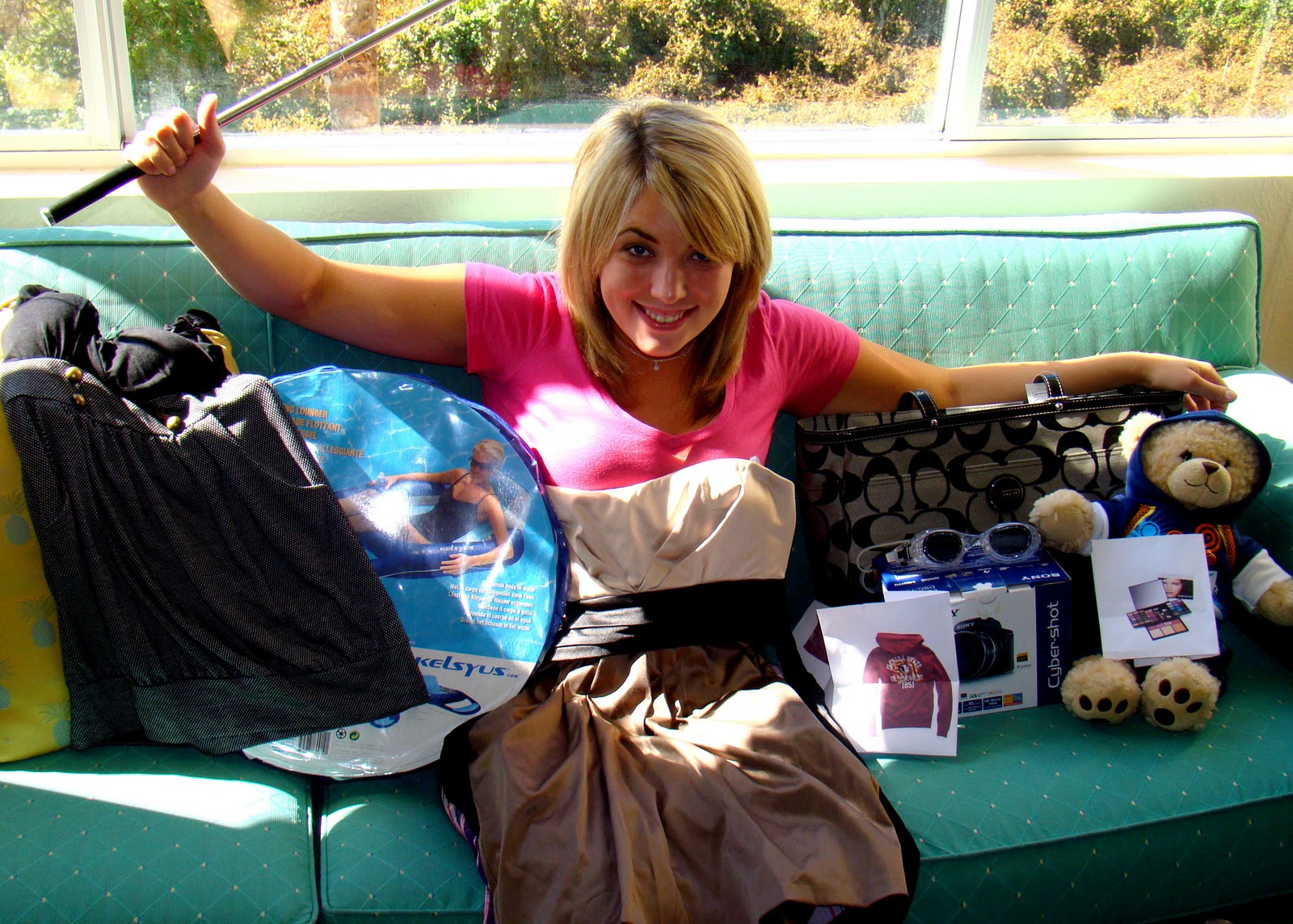 After all the opening it was time for breakfast…and of course that means Zach’s pancakes! And a good opportunity to use my new extended tripod! We take SO many pictures of each other on our own because we don’t like the way it looks to have one person hold out their arm and take it…and now we don’t have to! Isn’t it awesome? 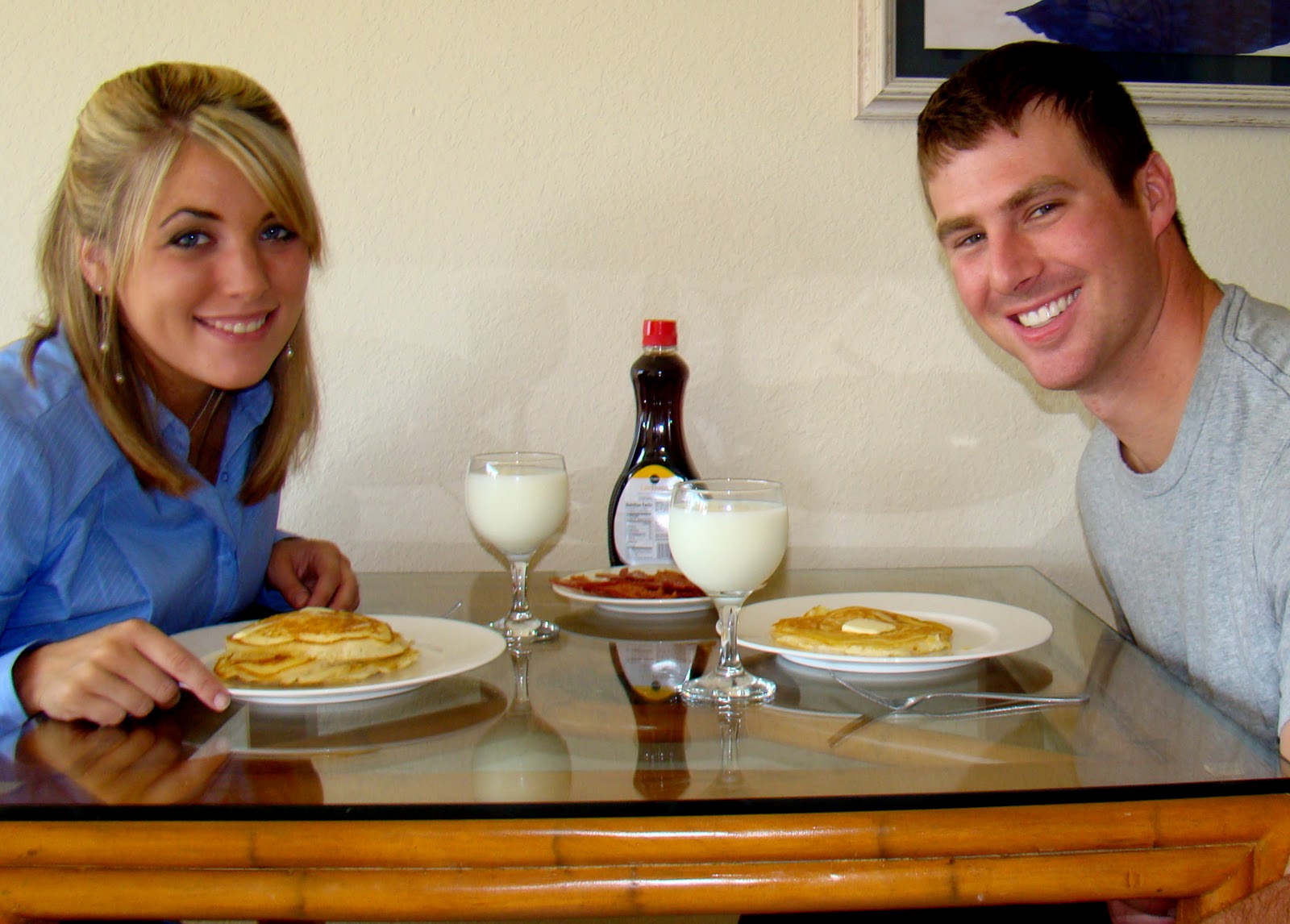 After we ate and Zach rested his back for a bit we wanted to hit up the Ikea in Orlando. It was, by far, our CHEAPEST trip ever there. We only bought a couple new bibs and plates and stuff for Kye…our total was only $8! We really went just to get a good feel for stuff to see what we want for the new house and to pick up new catalogs. I LOVE Ikea, but their website is so garbage. It’s a place that you just cannot fully experience until you go in person. 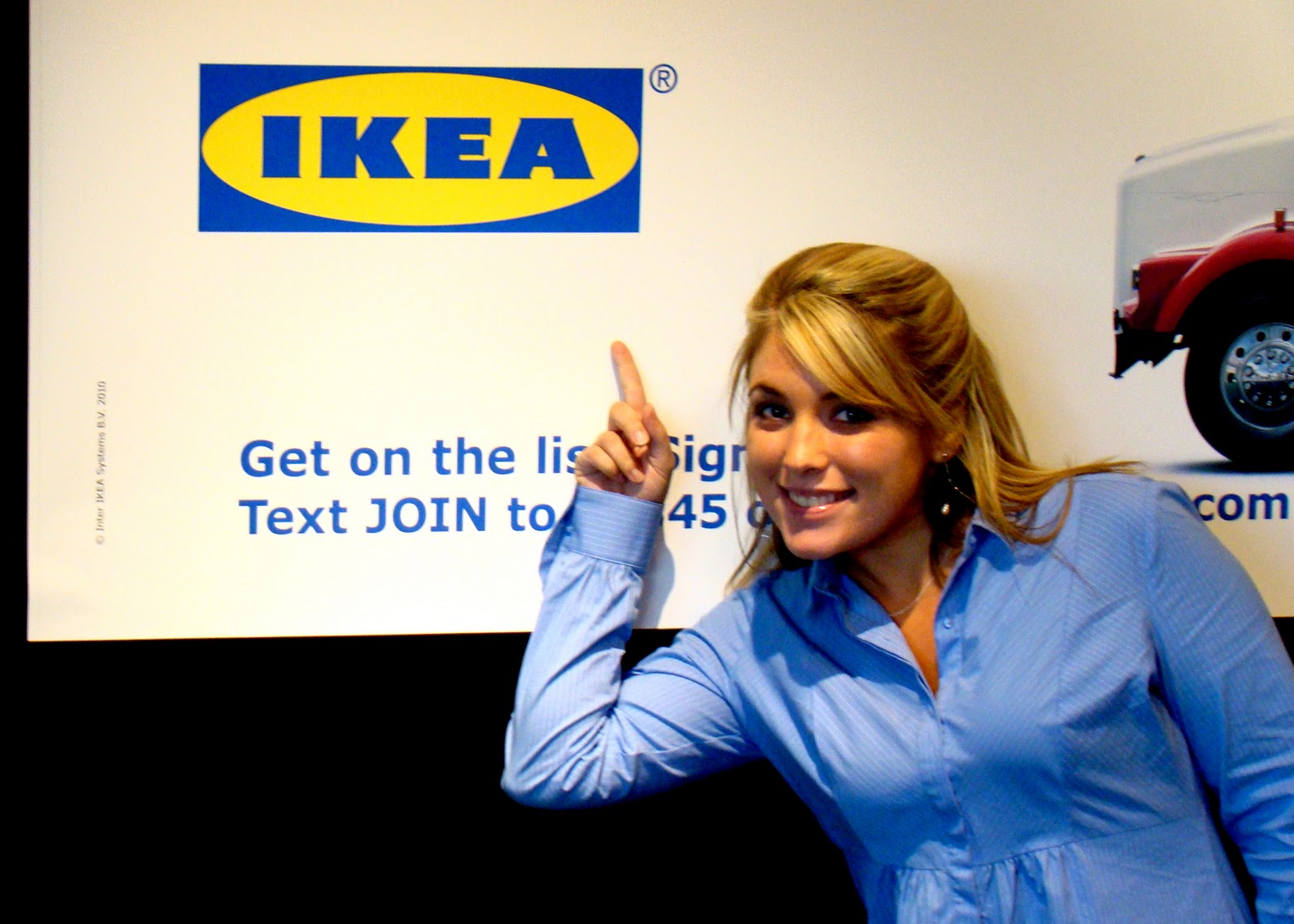 I love this for purse storage maybe? 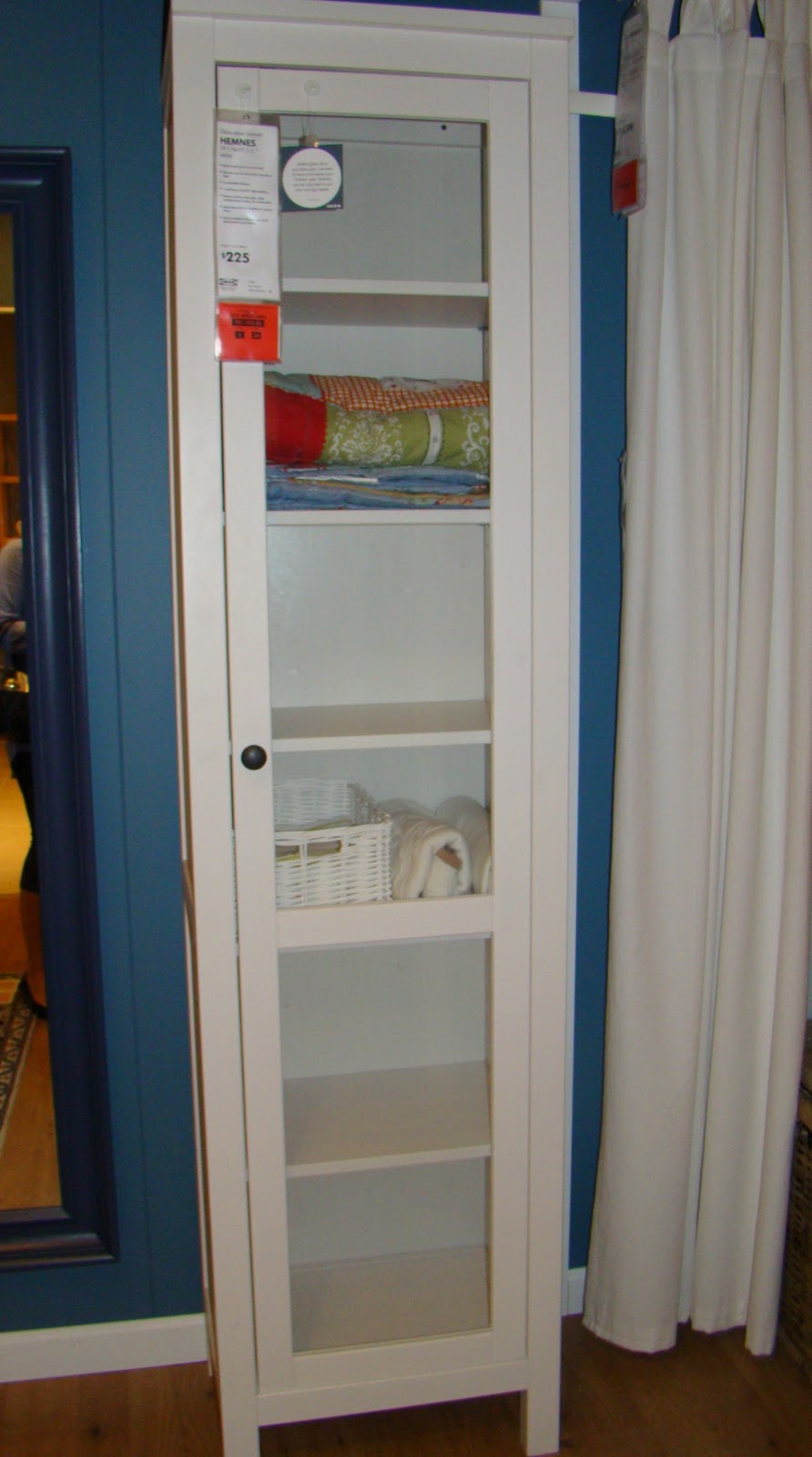 We LOVE this gray color and they make it in a cover for our sectional couch! I think it’ll look AWESOME and we need to eventually buy an extra chair for the living room too 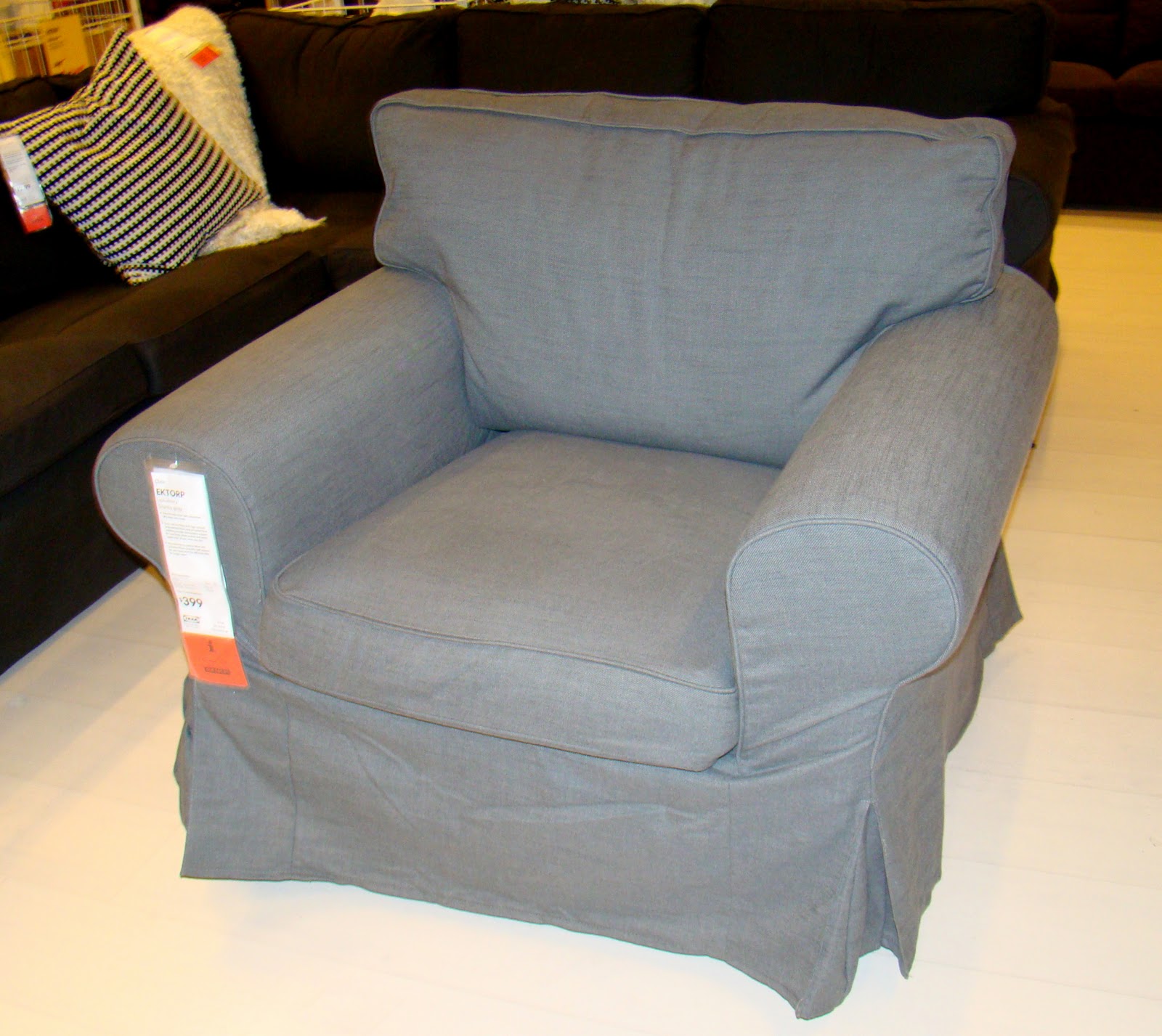 he loves those shopping carts 🙂 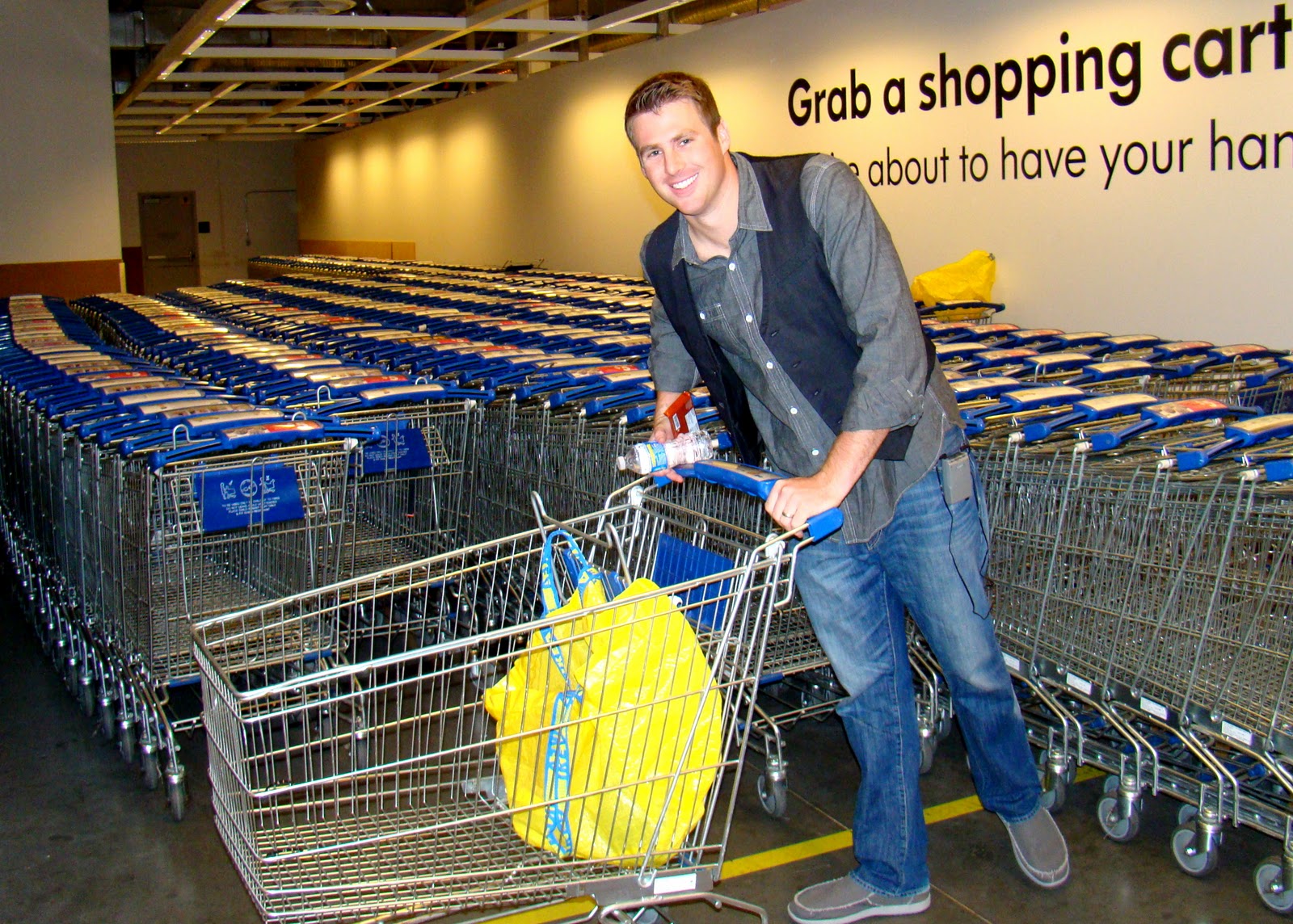 After our shopping (well looking) fun we headed to dinner. Since I LOVED California Pizza Kitchen on our Labor Day trip I thought it’d be fun to mix it up from the norm (which would be Maggiano’s or Cheesecake Factory) and go there! It took us AGES to find it but Zach loved it and we both ate our entire white pizzas without any help 🙂 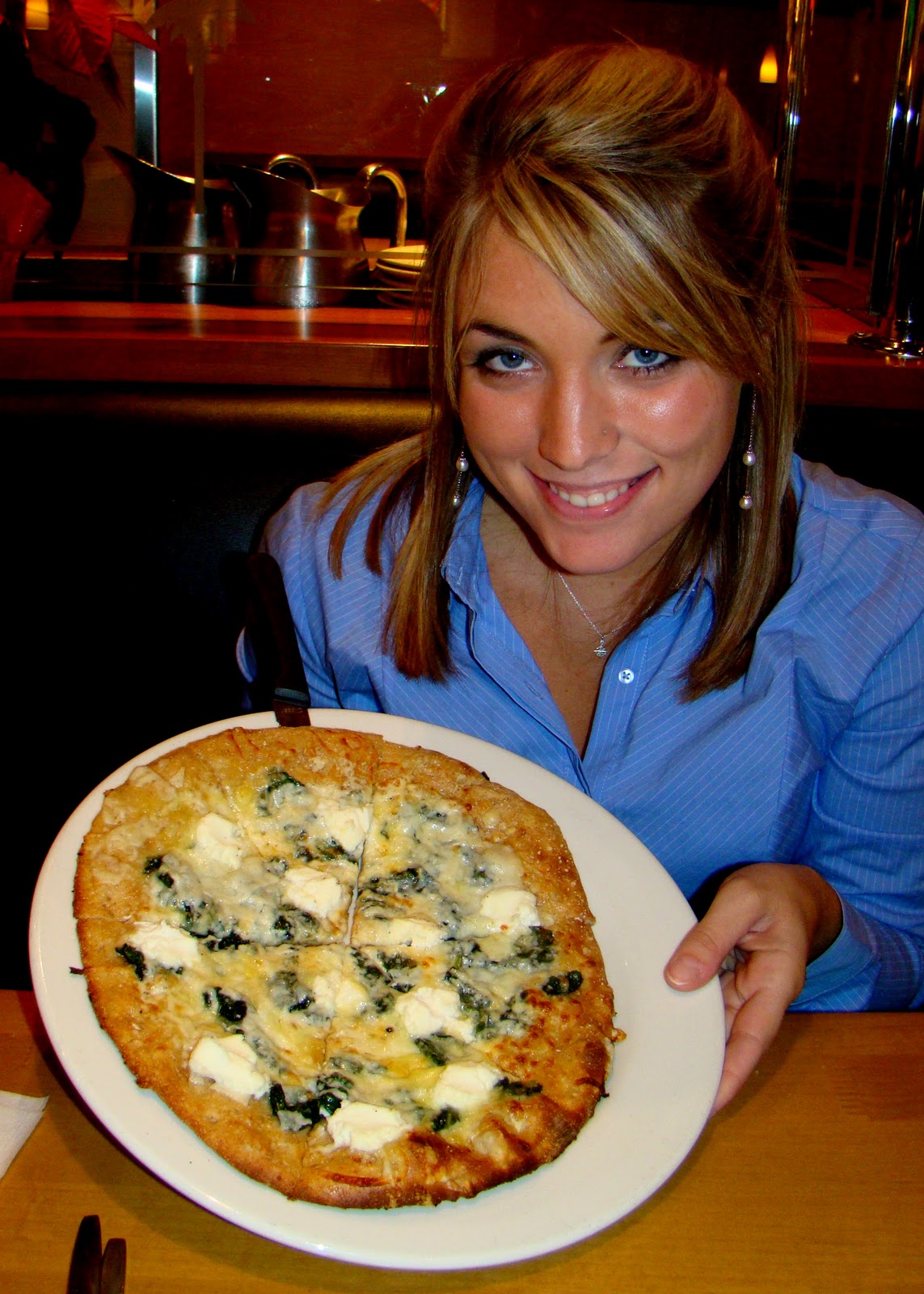 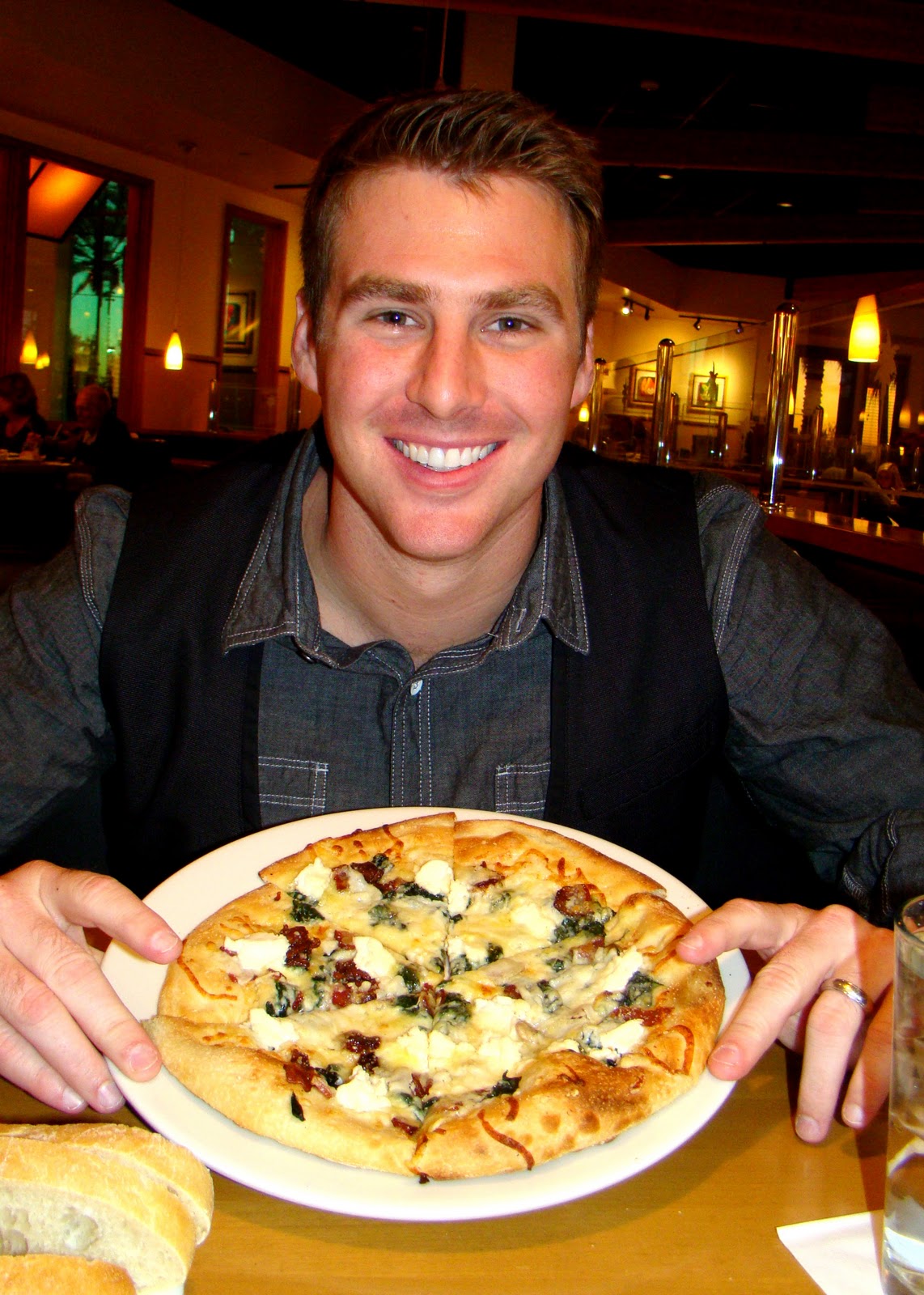 After dinner I really, really wanted to find the Mochi in Orlando. Gah. BIG mistake. It turns out there is actually a downtown Orlando and that there is a rather popular basketball team that plays there and that basketball season actually starts in December. And it turns out that the Mochi is in that downtown area right near the said basketball arena. And that the Mochi does not have it’s own parking lot. It was not a good experience and it ended in us going back to the condo and running through McDonald’s to get our dessert 🙁

We rented a movie for the night (The Men who Stare at Goats…random) and just relaxed. The next morning we did the timeshare presentation (and got $100 cash for our gift yay!) then headed home so Zach could make it back for his doctors appointment for his back. It was a short trip (only 2 nights) but it was fun and a much needed break for us both! Yay for Christmas!