This year Presidents Club got canceled but we still went to California so that counted as our Anniversary trip! Even though we had an AMAZING time and were super connected, we needed some quality time together by the time our anniversary came around at the end of May. After Zach was in bed in pain for 10 days and then had back surgery and then was in recovery…we both just needed a day to BREATHE and be together and reconnect!

Mrs. Charlotte and Mr. Rusty had the kids spend the night at their house the night prior to our actual anniversary (May 28th) so we could leave first thing in the morning on our actual anniversary. We drove down to Jacksonville to have a super chill day together. It was SO FUN. It was exactly what we needed, exactly when we needed it! So thankful to Zach’s amazing parents who “get it” and who love to keep our babies!

This year we didn’t do anniversary presents. With our country in the state it’s in we both wanted to invest in our safety. We each purchased a second gun as our gifts to each other. We both already have guns but neither of them are good to carry with us places (I wanted to make sure our carry guns had safeties!). It was a big investment but now that we have our conceal and carry licenses it was a must do!

Duh, had to get the pink one 🙂 It’s a Ruger LC 9 and the decal is from ANN Monograms! 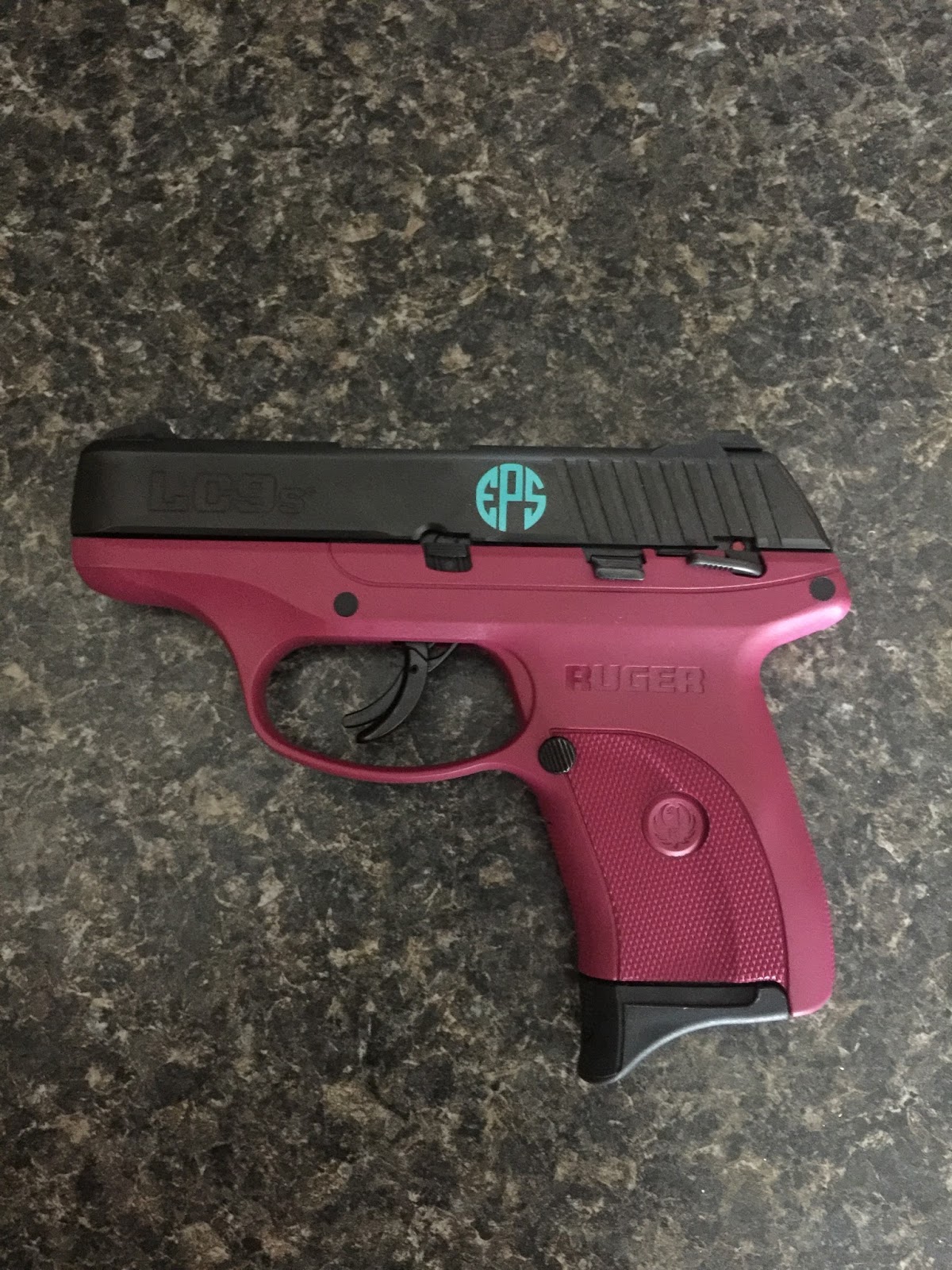 Even though we didn’t exchange gifts (cards only!) I still had to get him something 🙂 I love to try to get a traditional gift for the year of the anniversary we’re celebrating. One of the things for 9 years is leather and I found a SUPER cool shop on Etsy (Bramble and Beene) that makes leather luggage tags. I thought it was the perfect gift for Zach and I loved the options for personalization. It turned out GREAT and they shipped it crazy fast for me as it was kiiiinda a last minute idea 😉 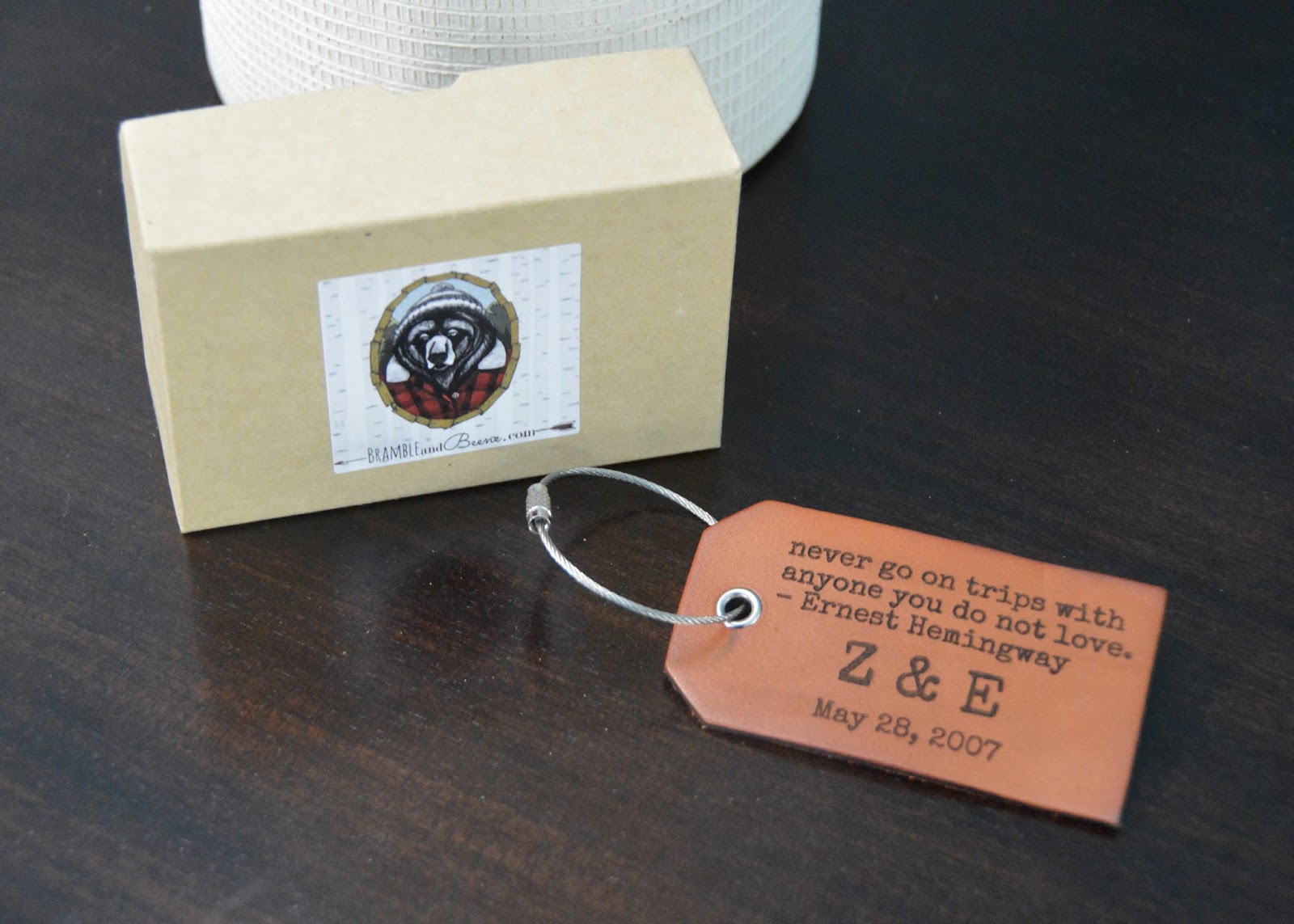 We headed out first thing in the morning. We had the kids stay the night the night prior to our day trip so we could hit the road right when we woke up and make sure we were back to pick them up before bedtime! We got to Jax and stopped at CFA for breakfast! 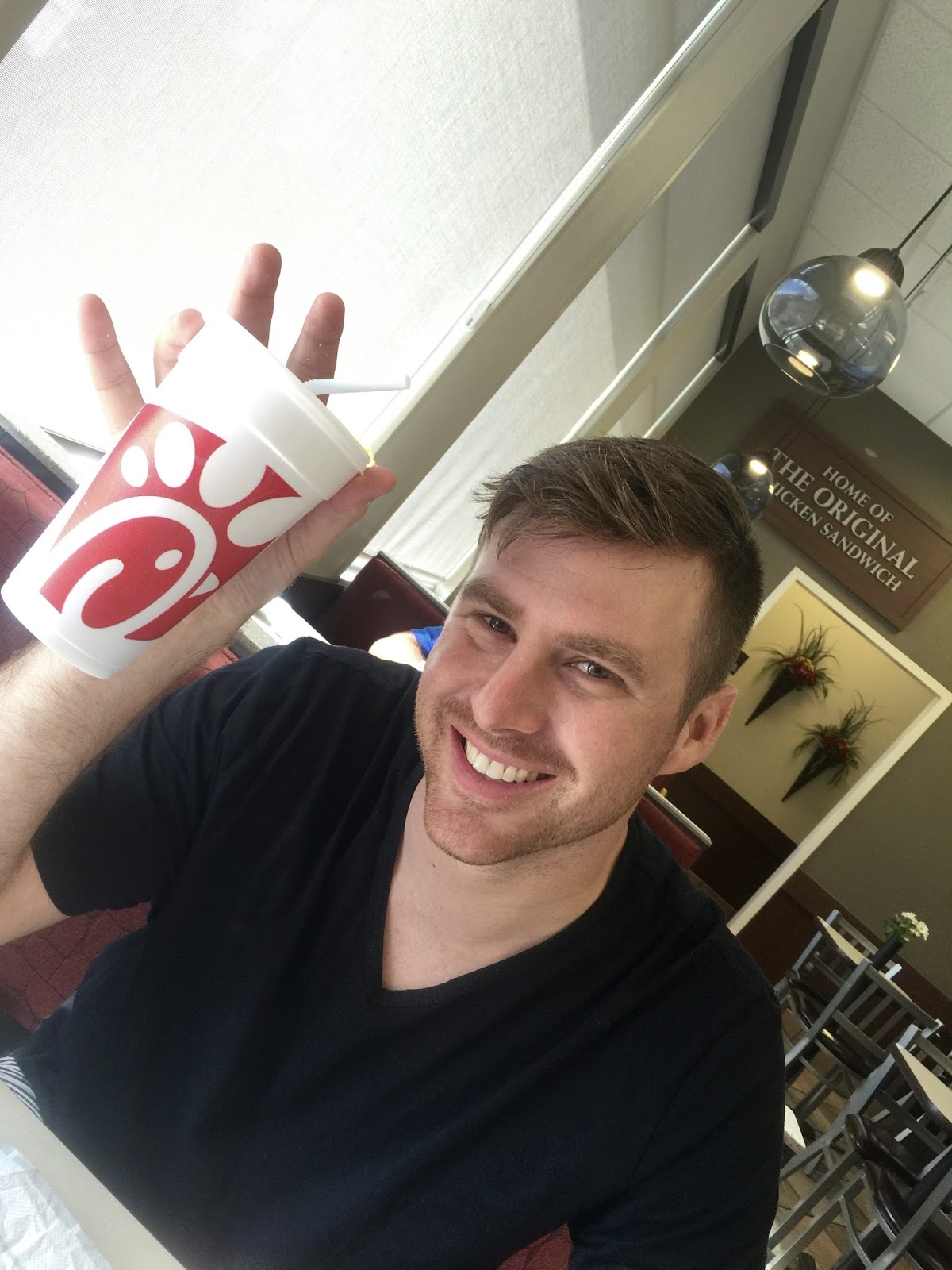 We were able to spend a solid 4 hours or so at the beach. It was a BEAUTIFUL day. Not crowded at all and so pretty! We both brought books to read but ended up just talking the entire time 🙂 It was seriously so fun just having our toes in the sand and laughing together! We both agreed it was the perfect day! 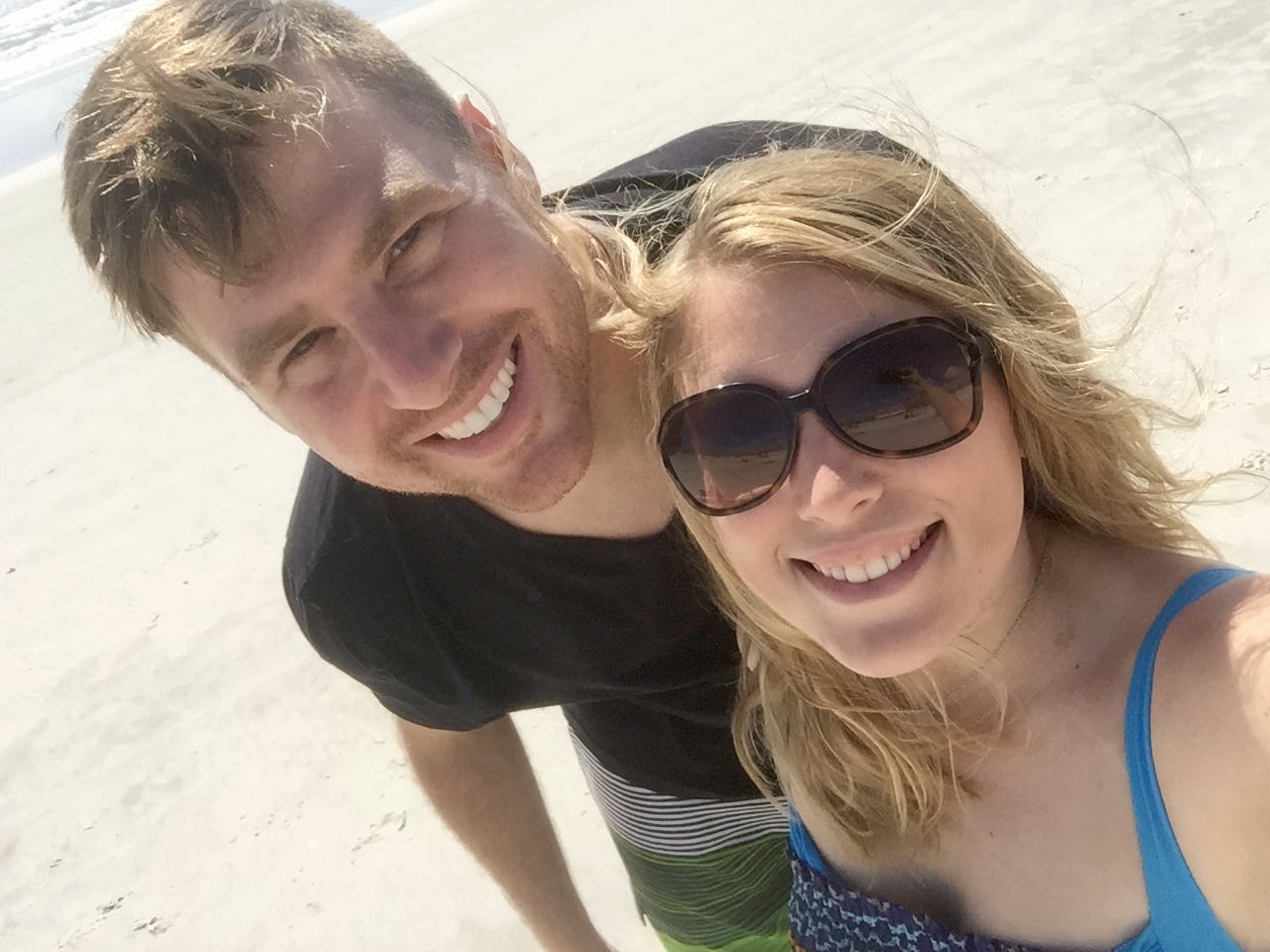 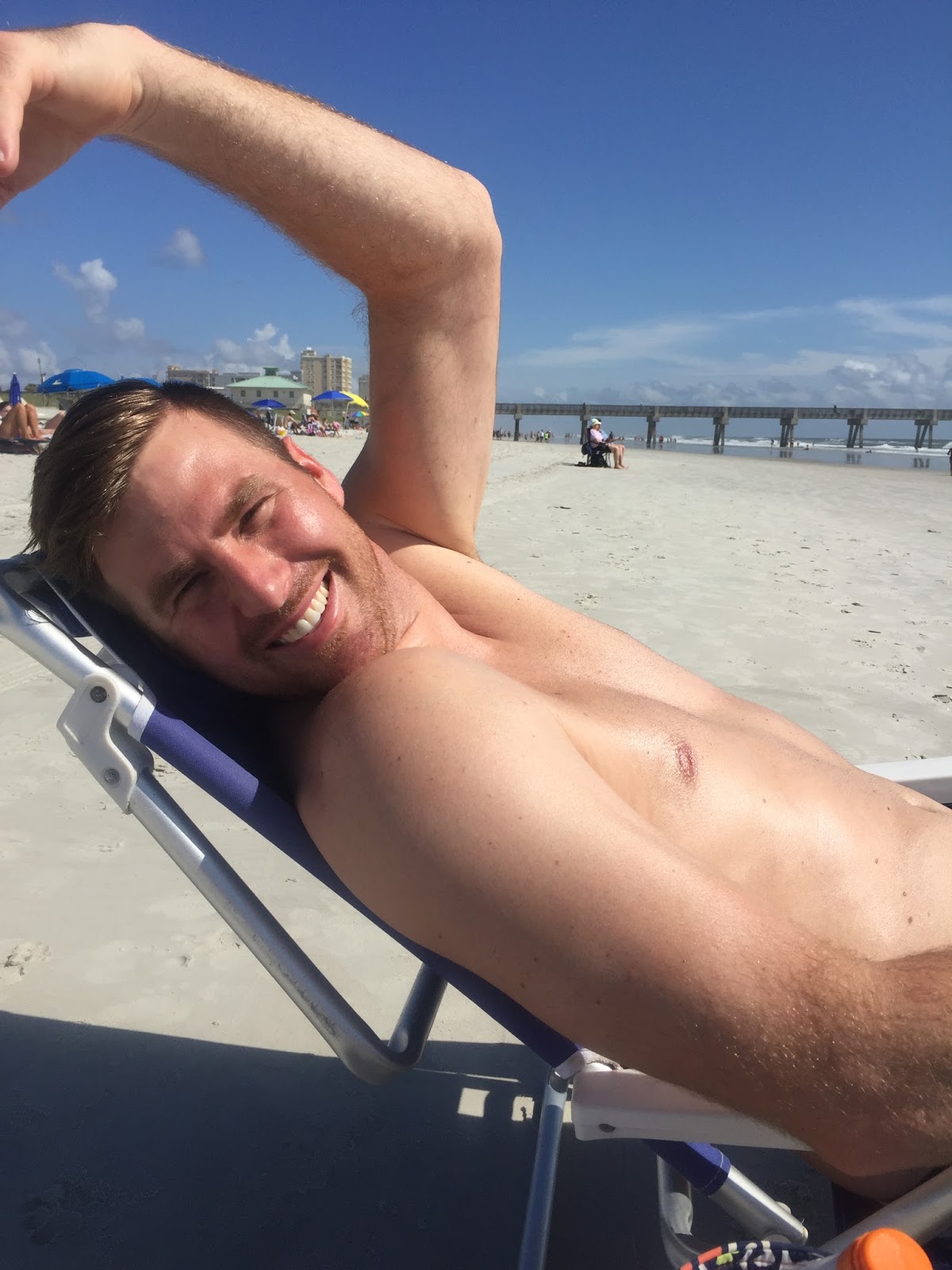 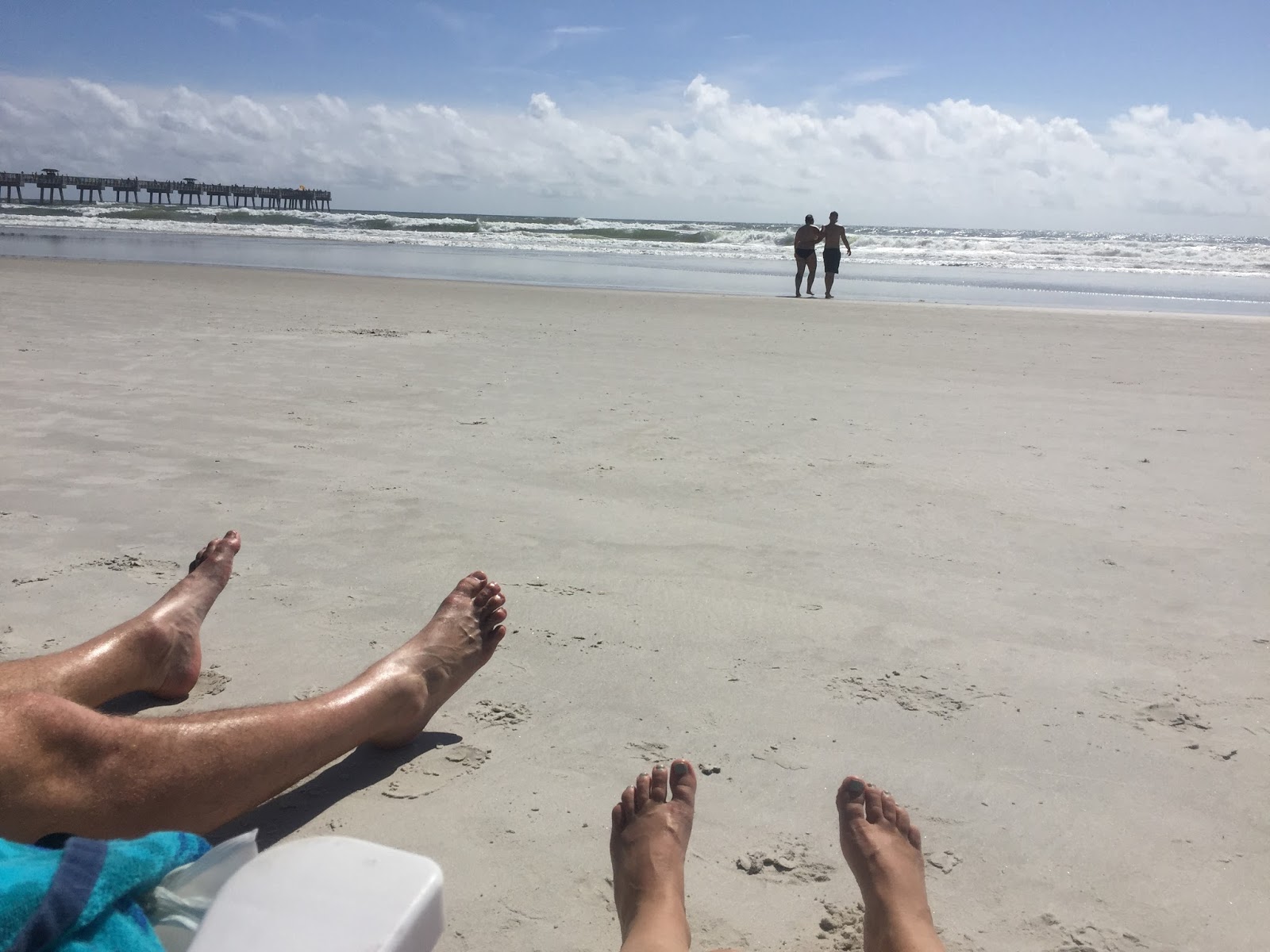 The weather at the beach was flawless…the heat in the public bathrooms though was suffocating. I got done and headed to the car to change there as it was just too hot for me in the bathroom. While I was digging in my bag for stuff this guy came up RIGHTBEHINDME and said “are you about to leave?” I scare super easily and jumped and even let out a yell when he asked me haha. Dude I get you want our spot, but you don’t have to get this close to me to ask. As soon as he walked away then I got scared again when a police officer came up to me and told us we had been parked in our spot for too long. Thankfully Zach was walking up at the same time and the police officer let us go without a ticket or anything!

We stopped to drop off a TON of my clothes at a Clothes Mentor store for them to go through while we ate dinner. It was a SUPER early dinner/mega late lunch at Maggiano’s! 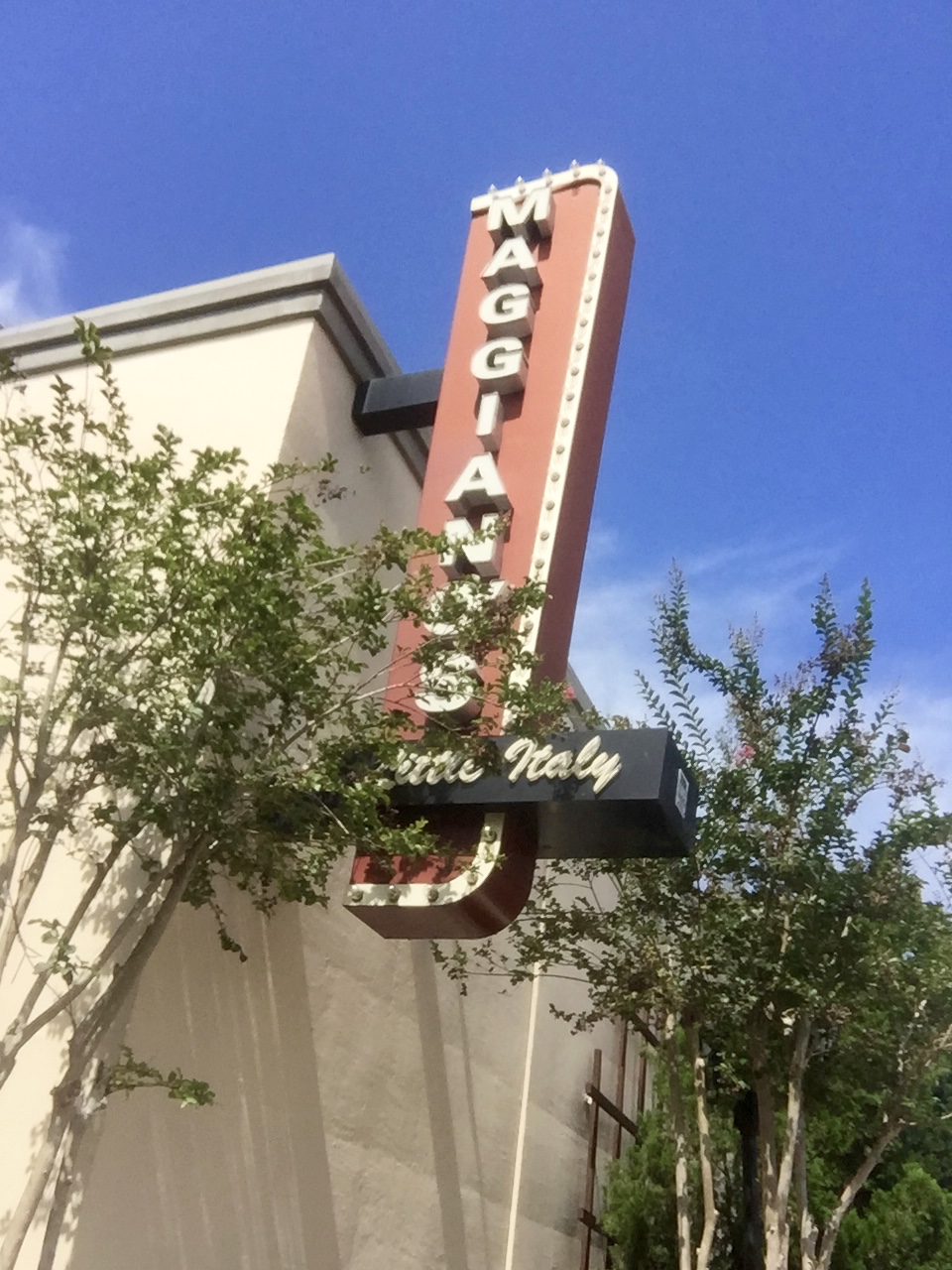 He liked the luggage tag 🙂 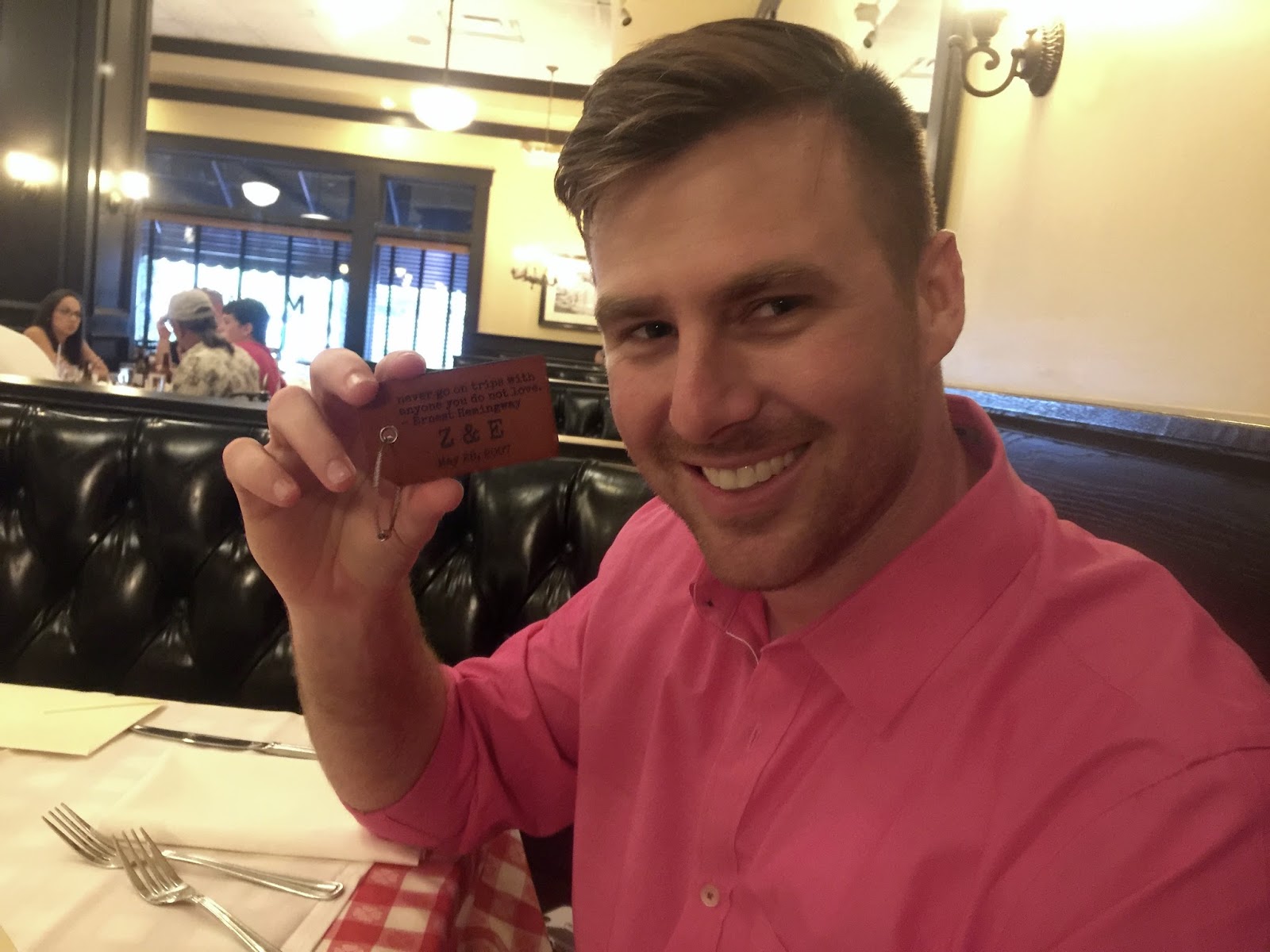 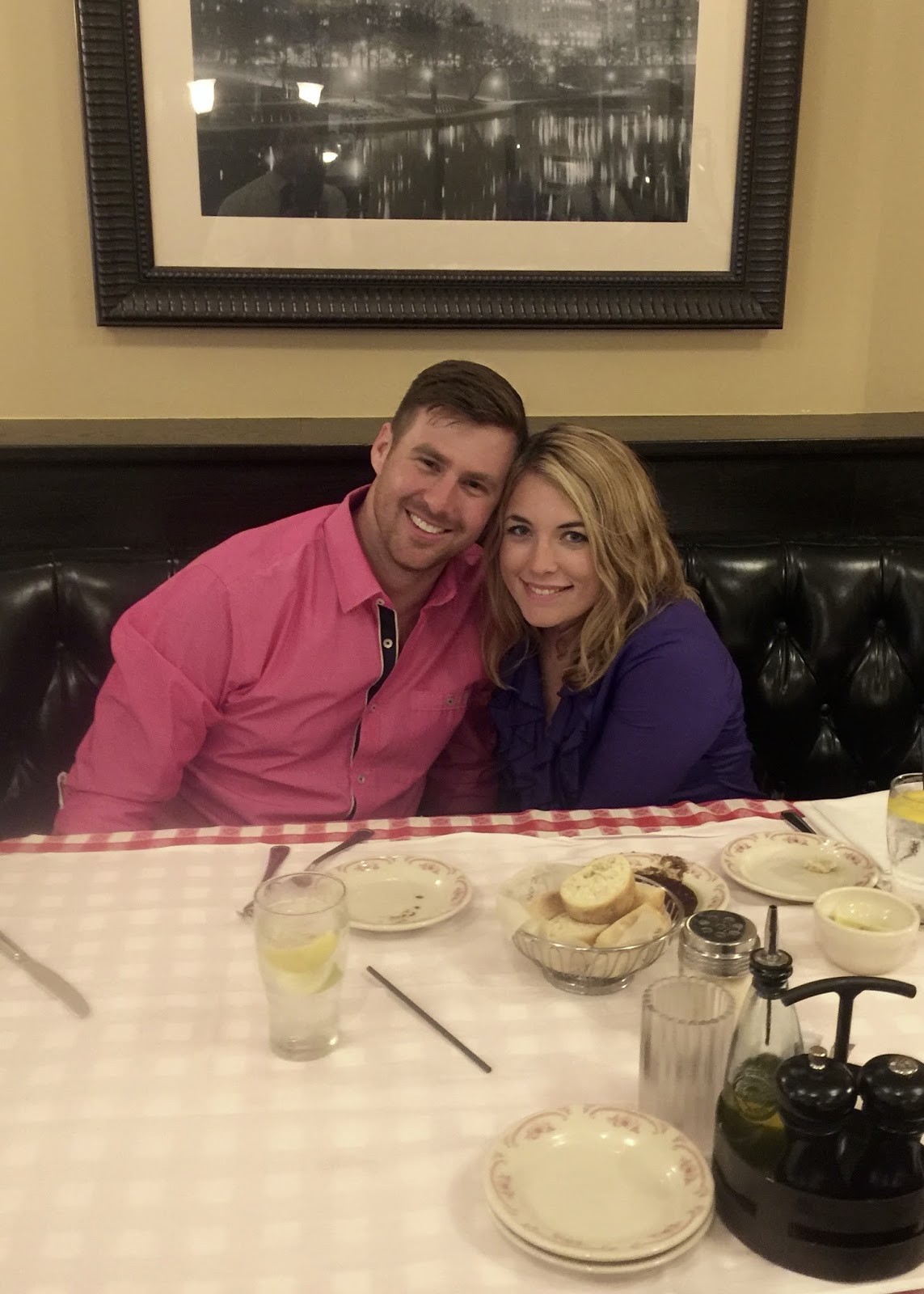 We haven’t had Maggiano’s in AGES. I was proud of myself for ordering from the “lighter” menu. And it was still just as fabulous! 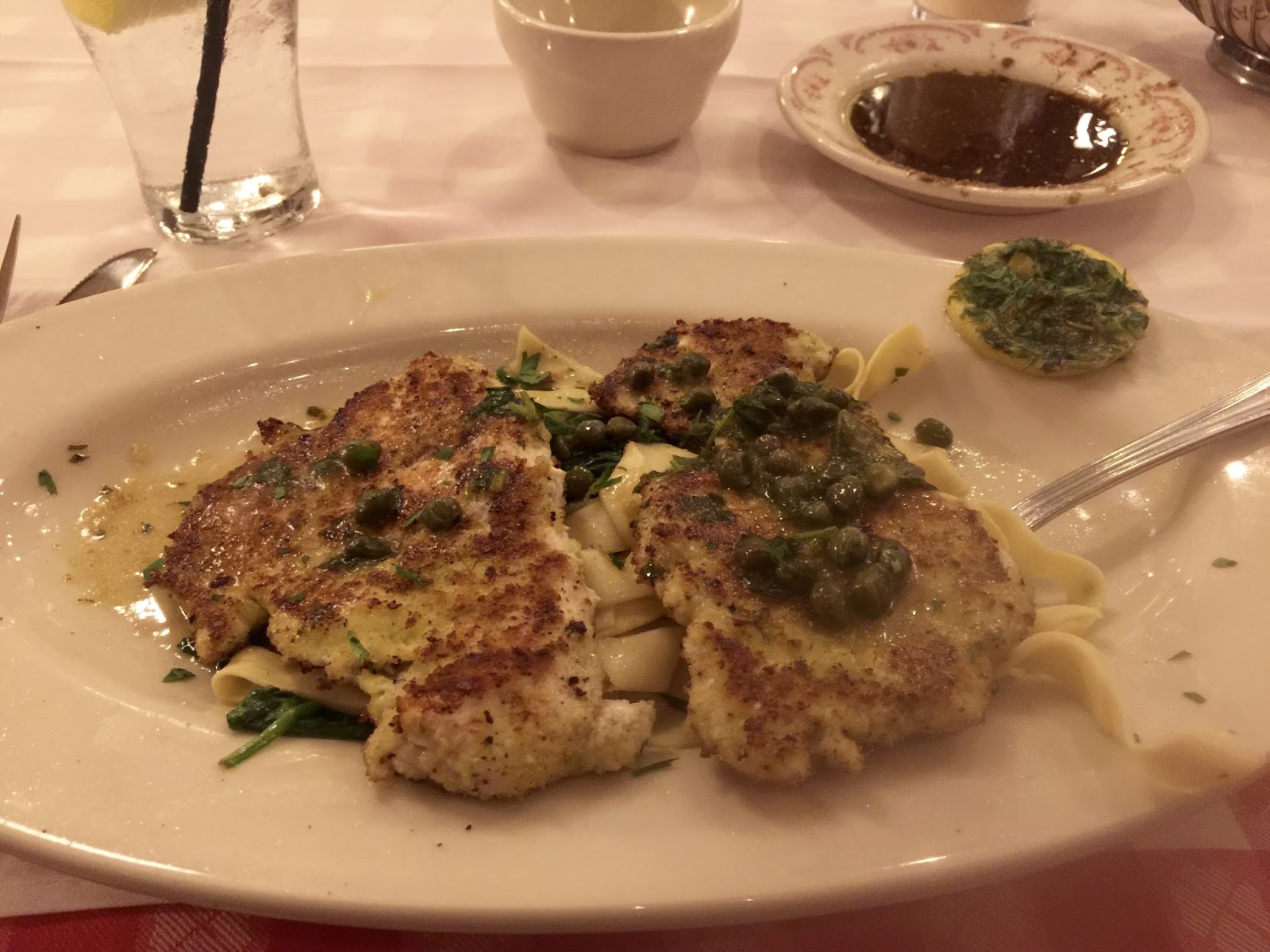 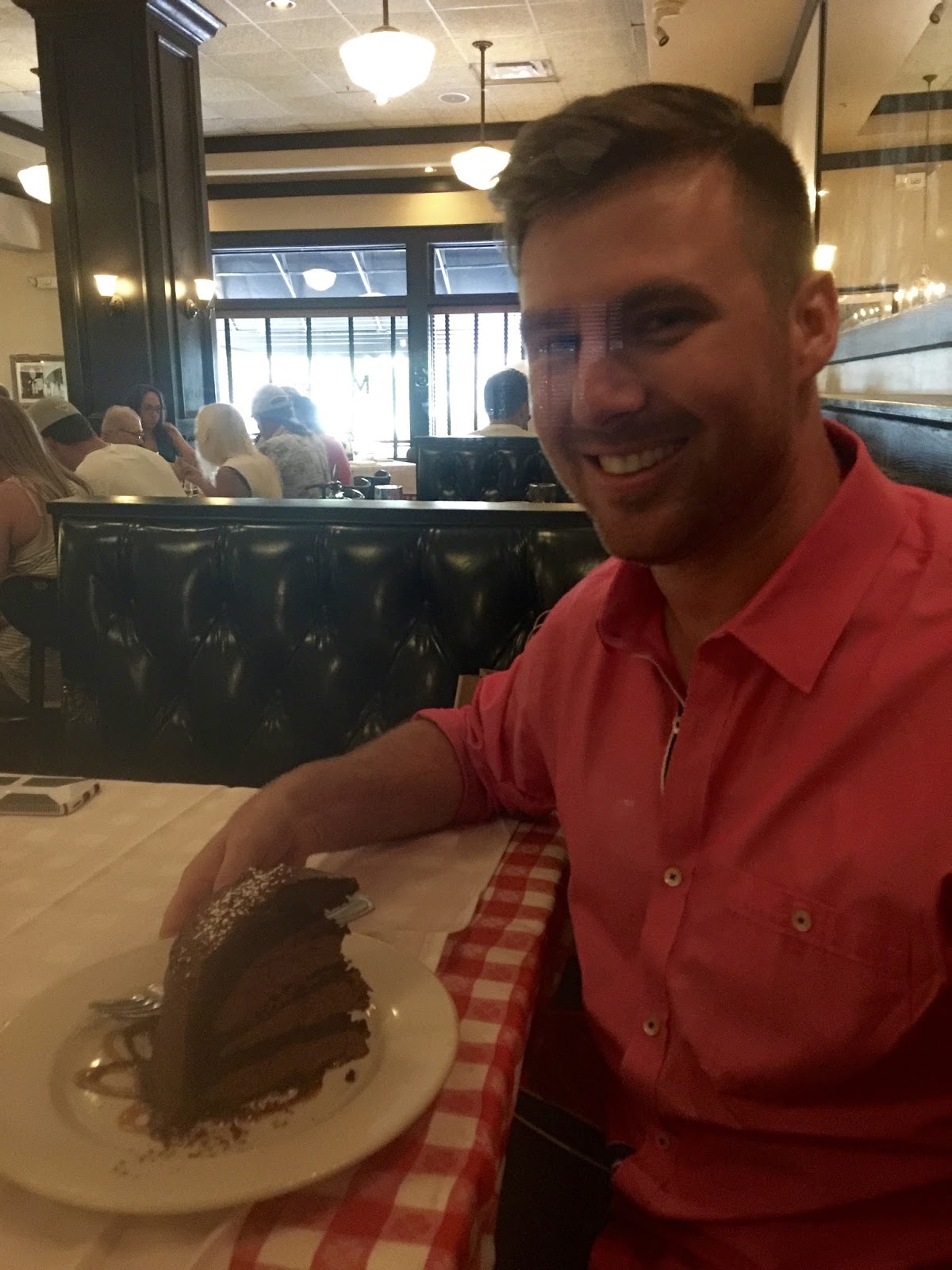 They brought us lemon cookies for free in honor of our anniversary celebration. Three things about these cookies: 1) they were ammmmmazing 2) I smiled for the pic and they ALL slid off the plate and I’m laughing so hard I’m crying in this photo and 3) my husband ate all the dang left over cookies when we got home so now, 2 months later, I’m still craving them! 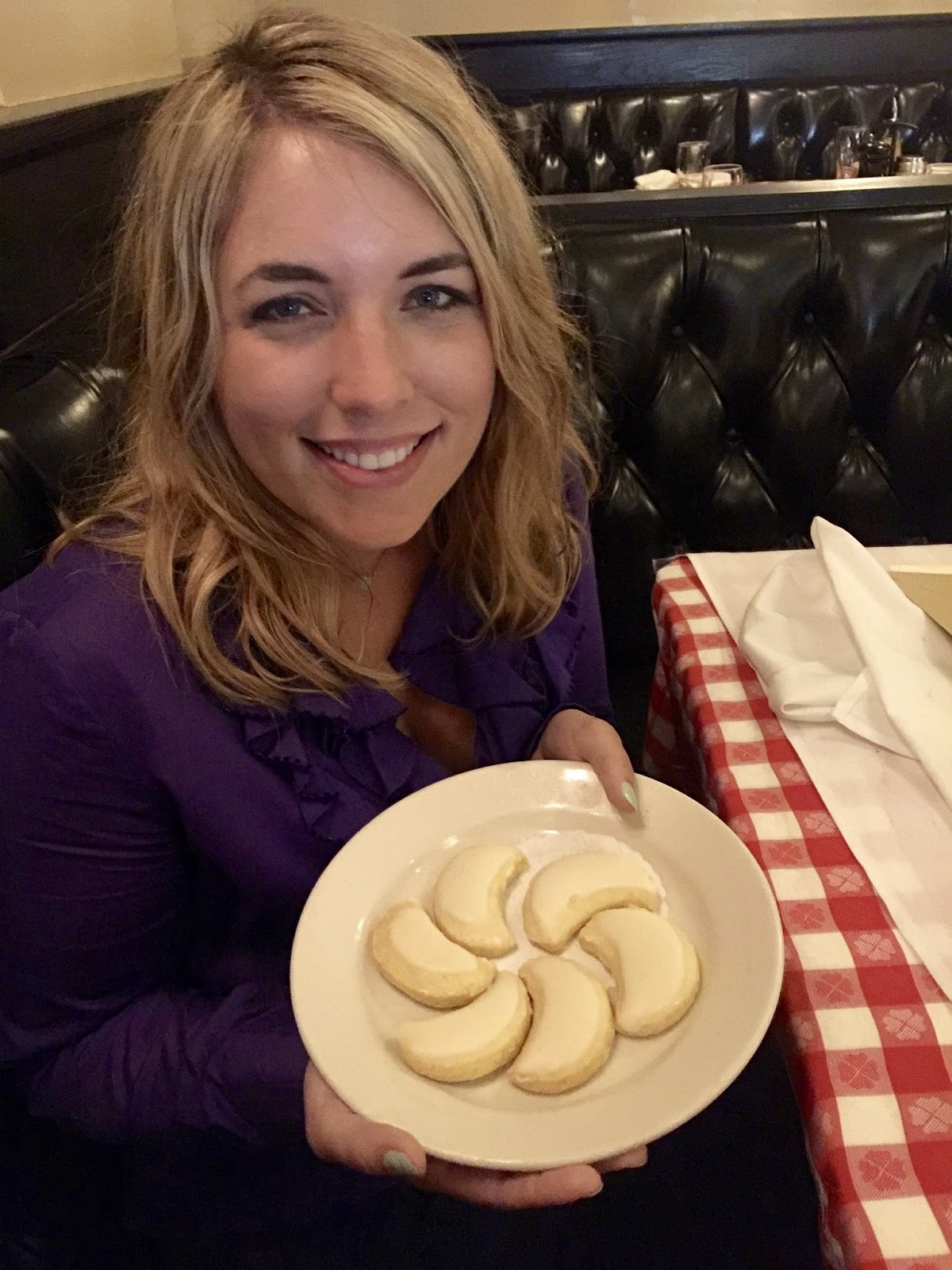 They had all these cars parked at the valet station for advertising. Like who is going to walk by a Range Rover parked at a restaurant and say “OMG I HAVE TO HAVE THAT CAR?!?!” 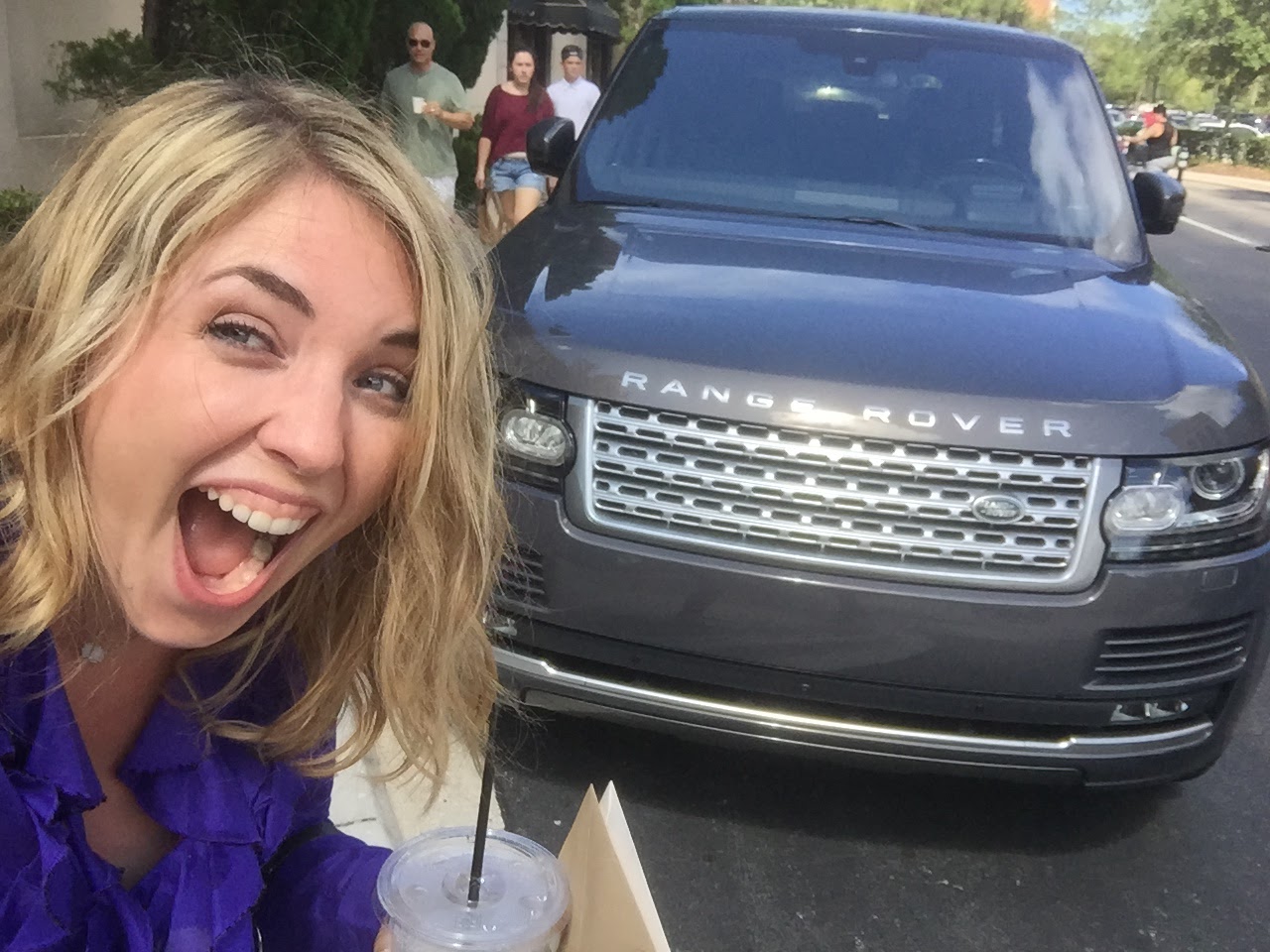 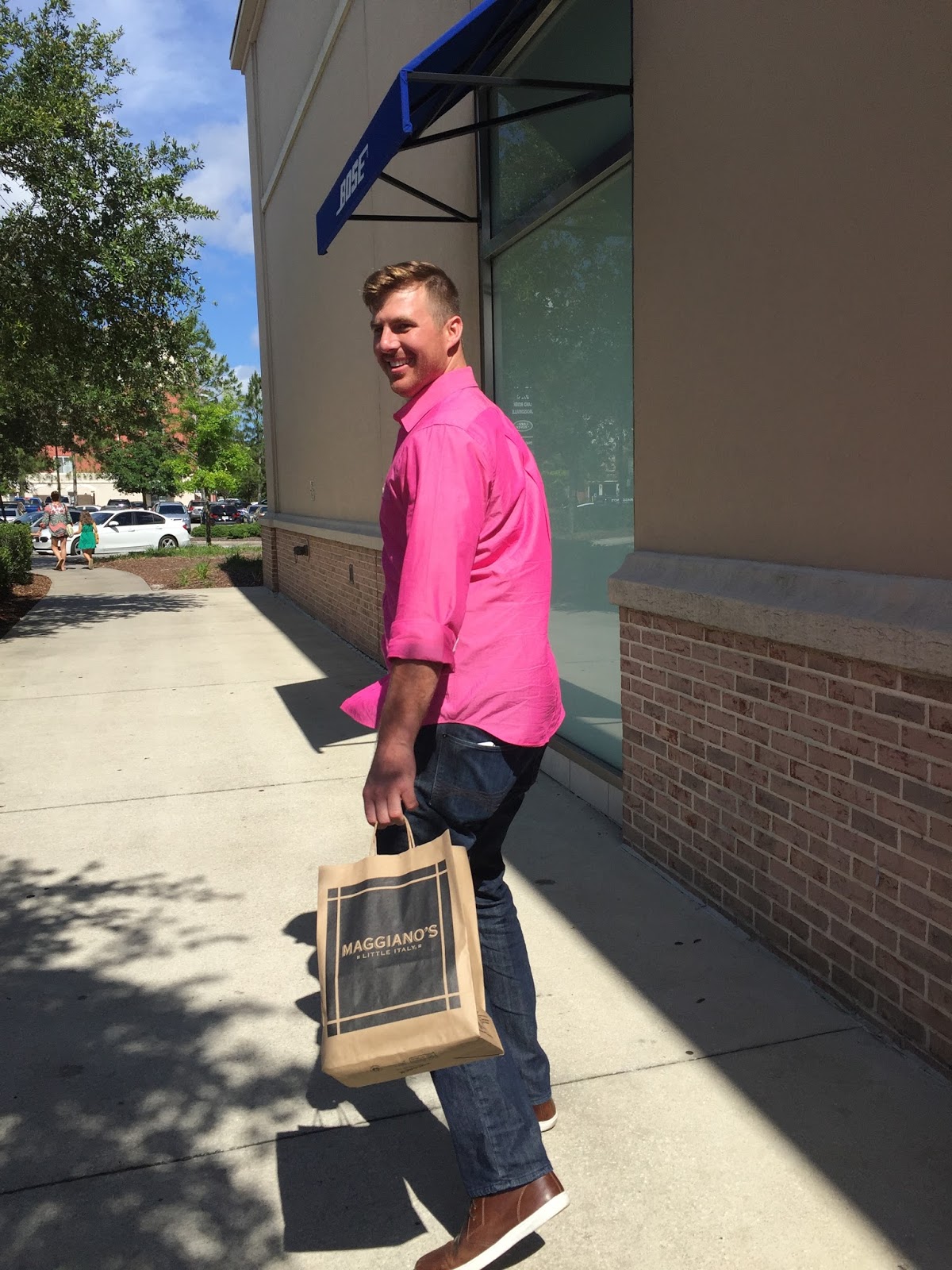 We left the restaurant and headed back to Clothes Mentor. I just recently heard of this store…it’s like Plato’s Closet but for adults. I had THREE TUBS full of my clothes for them to look through. I’ve been purging my closet and have been dropping down in sizes. Now that I’m done having belly babies I refuse to hang onto larger sized clothes. I better not need ’em again!

It was pretty funny when we went back to the store after dinner. The girl who worked there was SO SNOBBY. She told me a lot of my clothes were out of date. They bought like 30 items I think and of those a TON of them I had bought in dang 2004. So joke is on you lady. You just bought my outdated styles haha. Looking around the store while I waited I didn’t actually see anything I’d want to buy so I kinda think the style of stuff they take may just be not that current? I was shocked at the old stuff they bought but the practically new, on trend, stuff they passed by! Casey is glad b/c she took that stuff haha. Even with the snobby attitude I still walked away with $95 so I’m not complaining! I went through it all with a fine tooth comb and am going to go through my closet again and next time we’re in a town with one of those stores I’m going to take more items by to them just to see what else I can get! Def better than what you make at a garage sale! 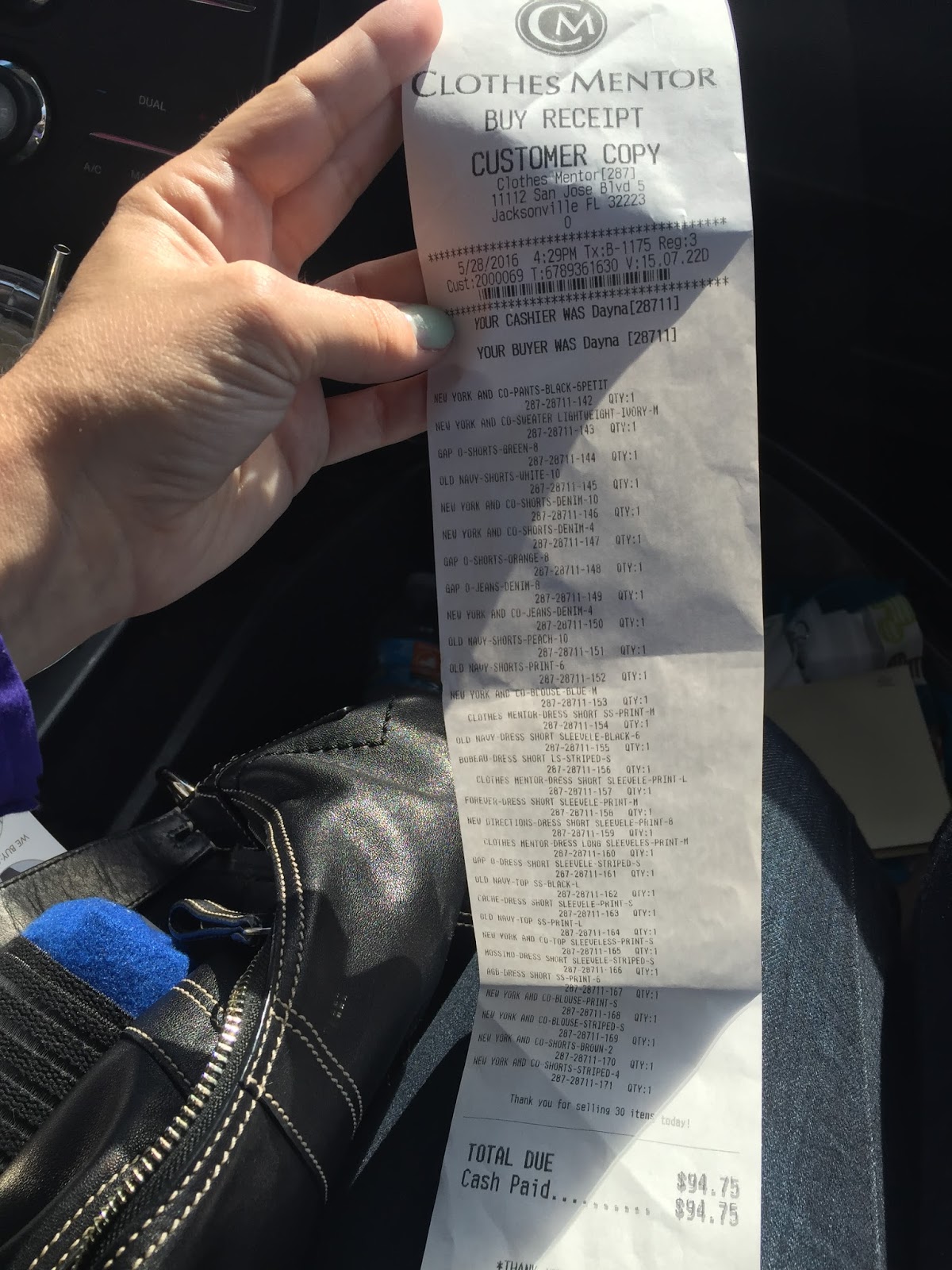 We got home in plenty of time to grab the kids and get them in the bed for the night. We had SUCH a fun, relaxing, reconnecting day together. I wouldn’t trade our love for the world and I’m just so blessed to be Zach’s wife. I cannot believe that we’re 1 year away from the BIG 10!!!!  Speaking of…if you were planning a 10 year anniversary in this current terrorism situation…where would you plan to go??? We wanna def make sure we’re safe but also that we do something AWESOME to celebrate such a huge milestone!!! 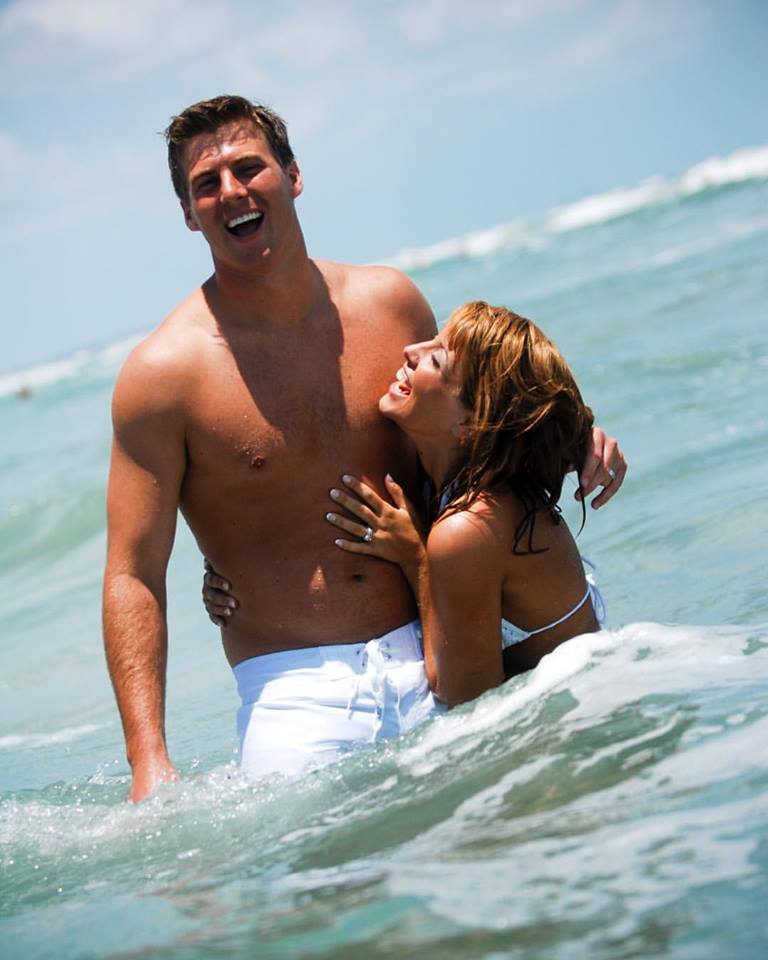