Sadly this is my last Vegas post! But…that means that Disney posts are right around the corner so I’m pumped for that 🙂

Our trip was very short. We arrived Thursday (Sept 15th) and left Saturday (Sept 17th). Yeah, I know. Mega short! Honestly though, it was more than enough time to do everything we wanted to do and neither of us feel the need to ever go back to Vegas. I don’t know what Zach and I will do if we go there with Aflac! There are lots of shows and stuff you can see at night, but practically nothing to do during the day. Katie and I were thankful we had the Vegas travel magazines b/c they listed tons of free things to do!

After all our fun at the Vegas Bash the night before we got some more solid sleep in (12 hours our first night there and 10 our second…pretty awesome!). When we woke up we caught a taxi down to The Strip and ate a late breakfast at Planet Hollywood. Again, super slllllllow service. But the food was good and the prices weren’t too bad either!

Plus our receipts were good for one ride on the mechanical bull – too bad we never saw him! 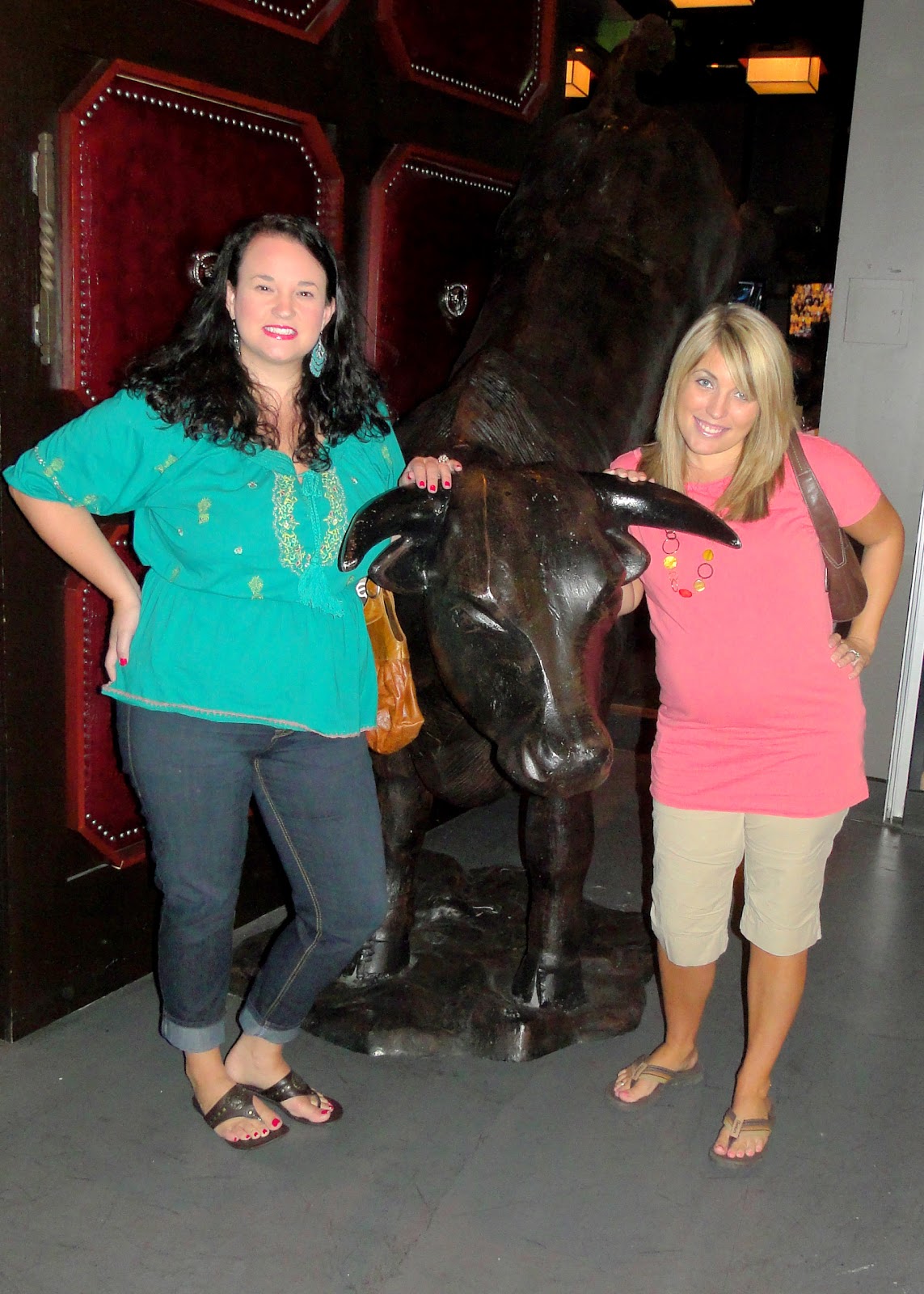 The thing we decided to do was to go around the strip and try to see all the fountain shows. I know, it’s random. But they were free and they were supposed to be pretty cool. Our first one was at Planet Hollywood and it was mega lame. A couple minutes long and just basically colored lights on the water with a short song. We were some of the only people watching! We may not have enjoyed the fountain show, but we really liked the hotel. It was so much more spacious than the others we’d been too and had some great shopping (too bad we didn’t have the dough – or luggage space – to really check it out!). 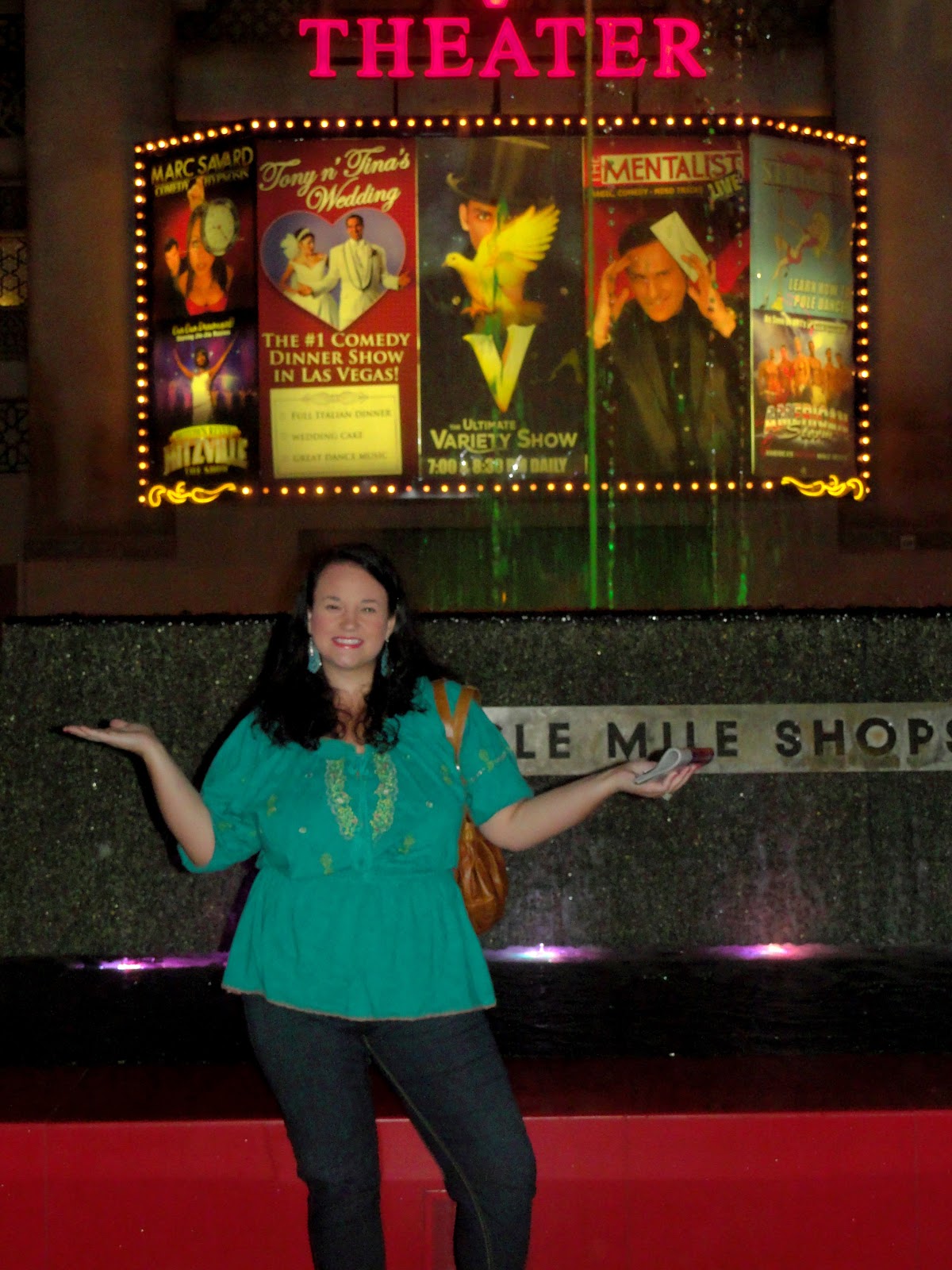 In front of the lame fountain 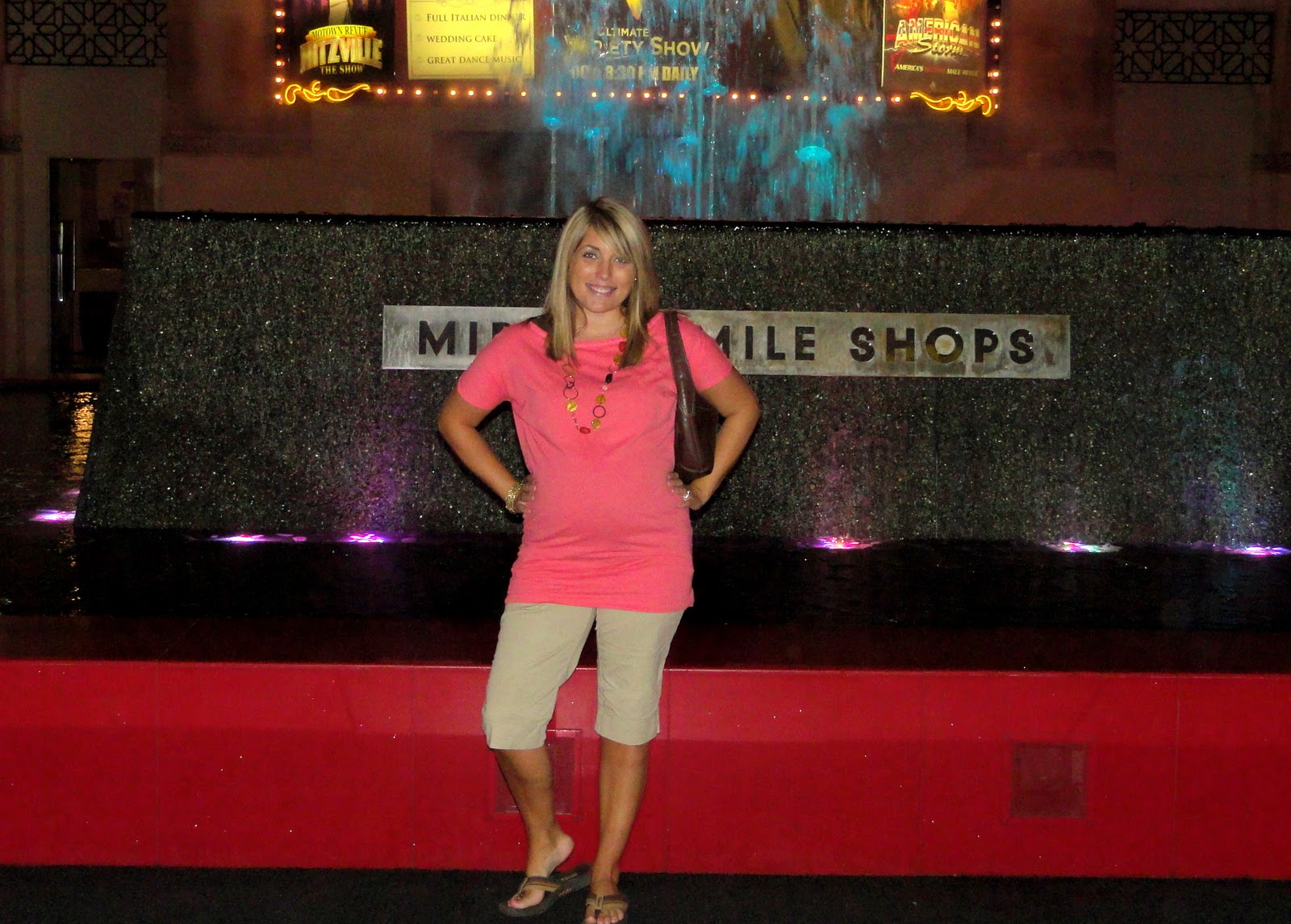 You know you’re in Vegas when a HUGE Stripper is posed in the middle of a mall! 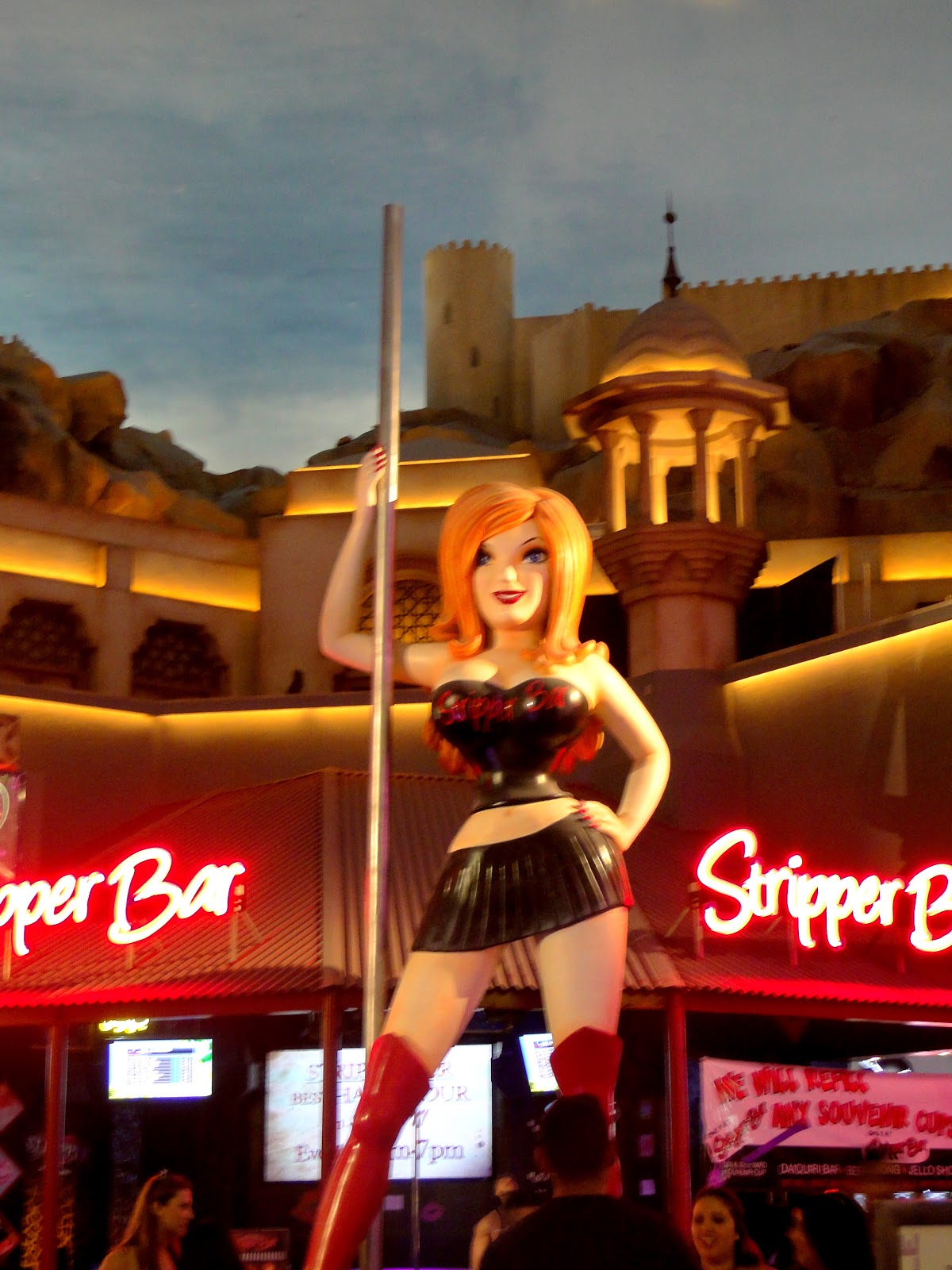 On our way to Planet Hollywood our taxi driver was crrrrrazy. He drove like a speed demon through a deserted parking garage in a way that totally made us feel like we were in a high speed chase on some action movie! Where he dropped us off we weren’t even sure where we were so we were pleasantly surprised when we exited the hotel and saw that SO much was right around us! 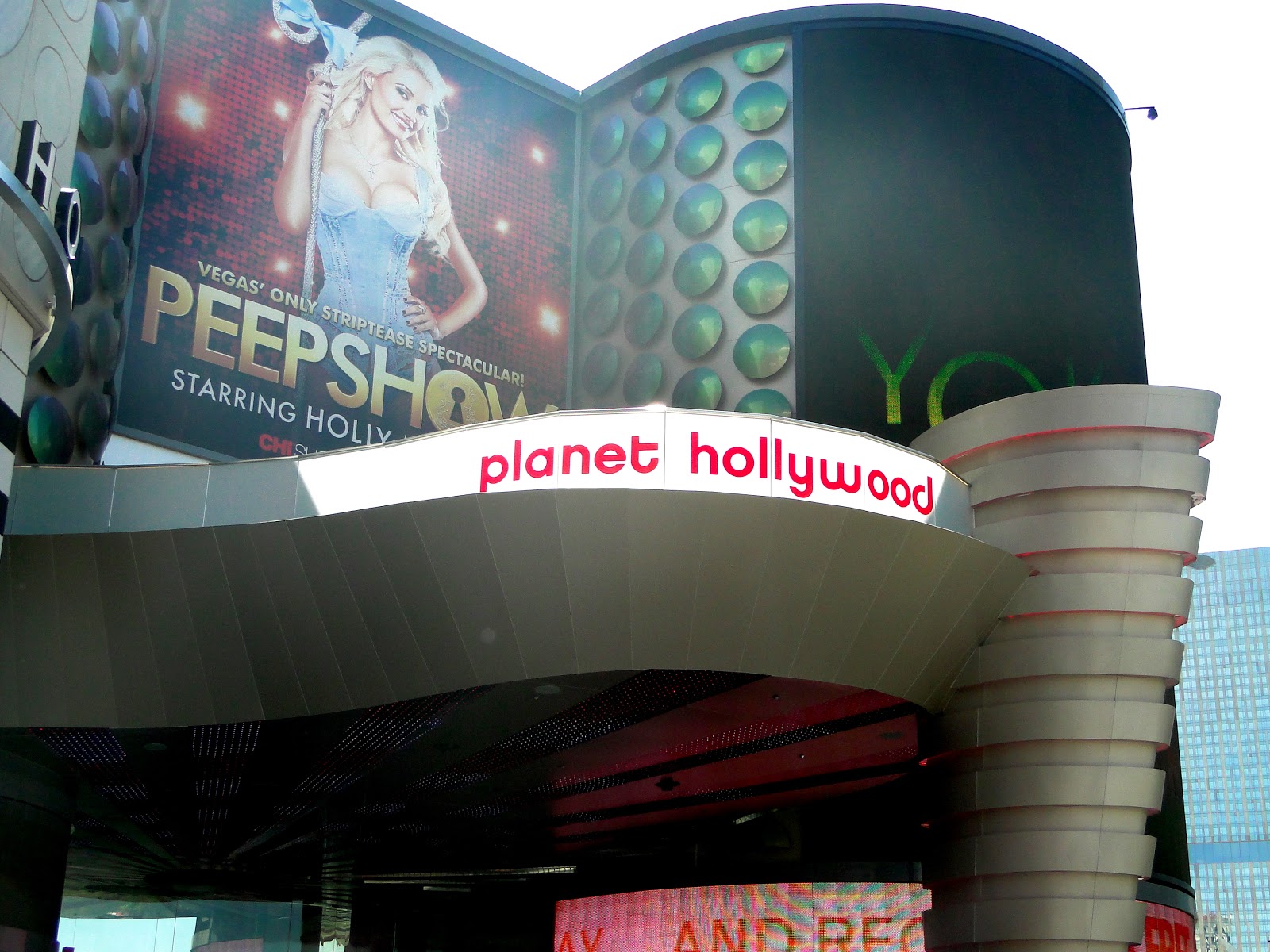 Got to see a few of the Vegas sights! 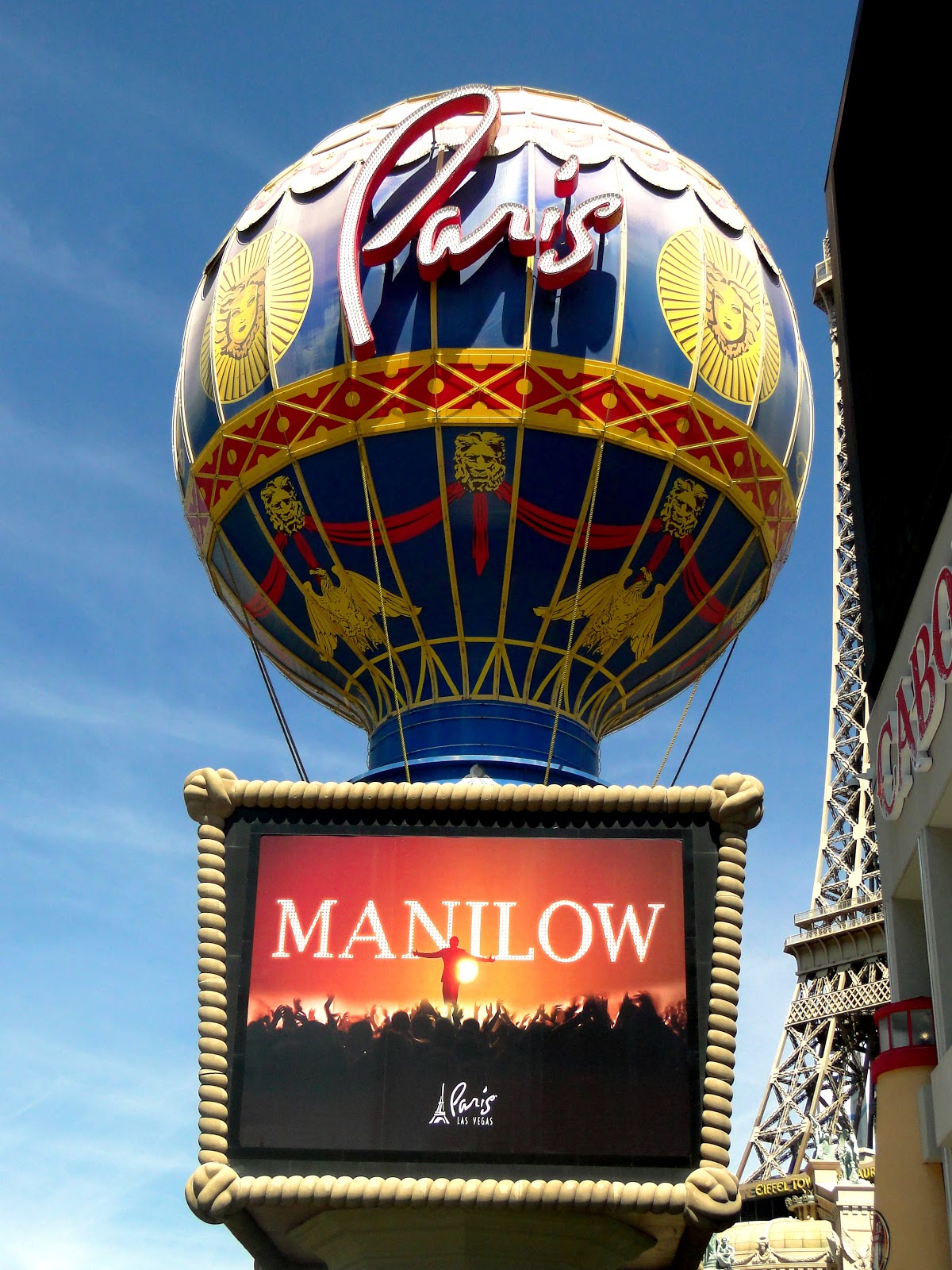 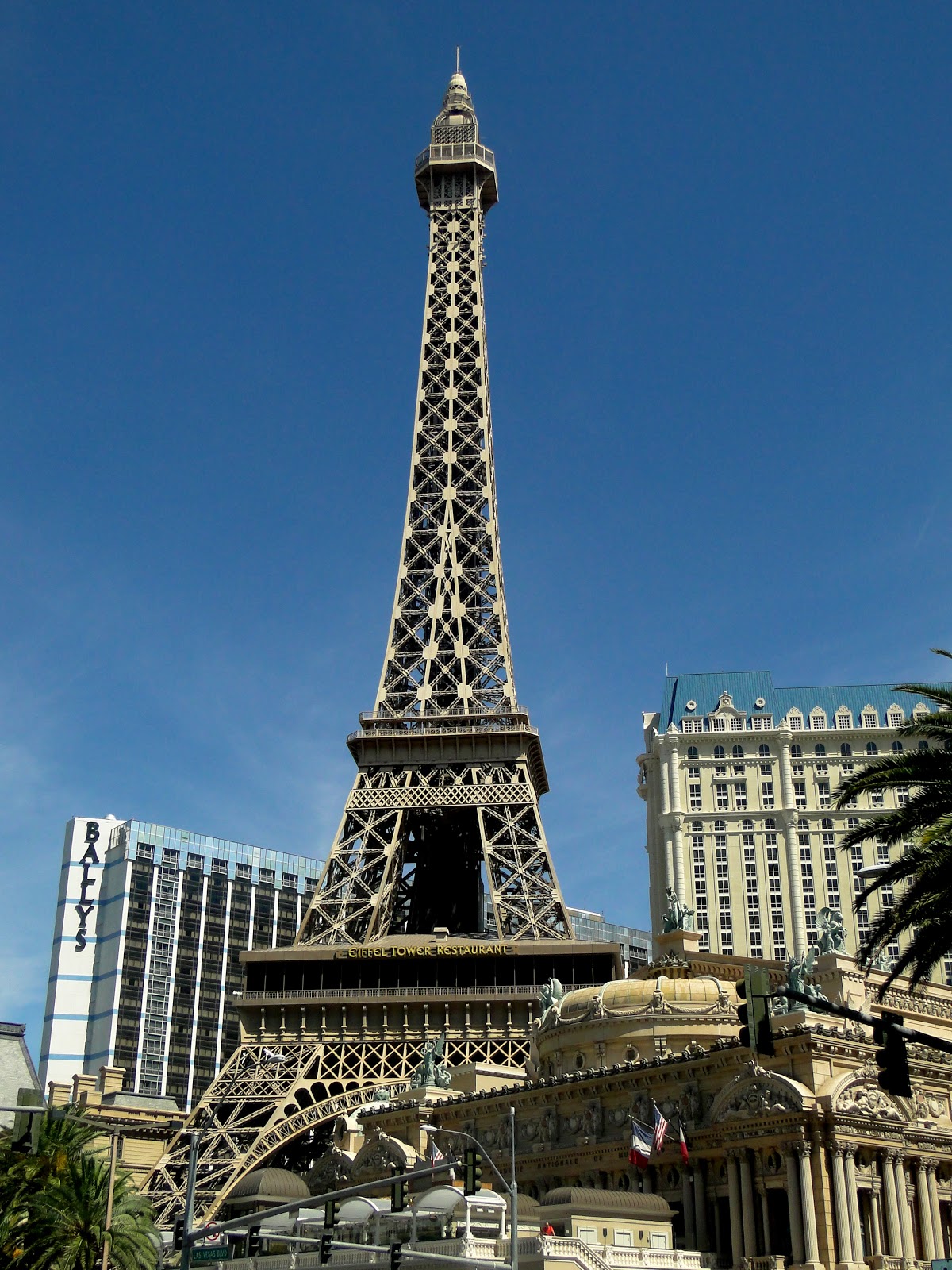 Our next stop was The Bellagio! 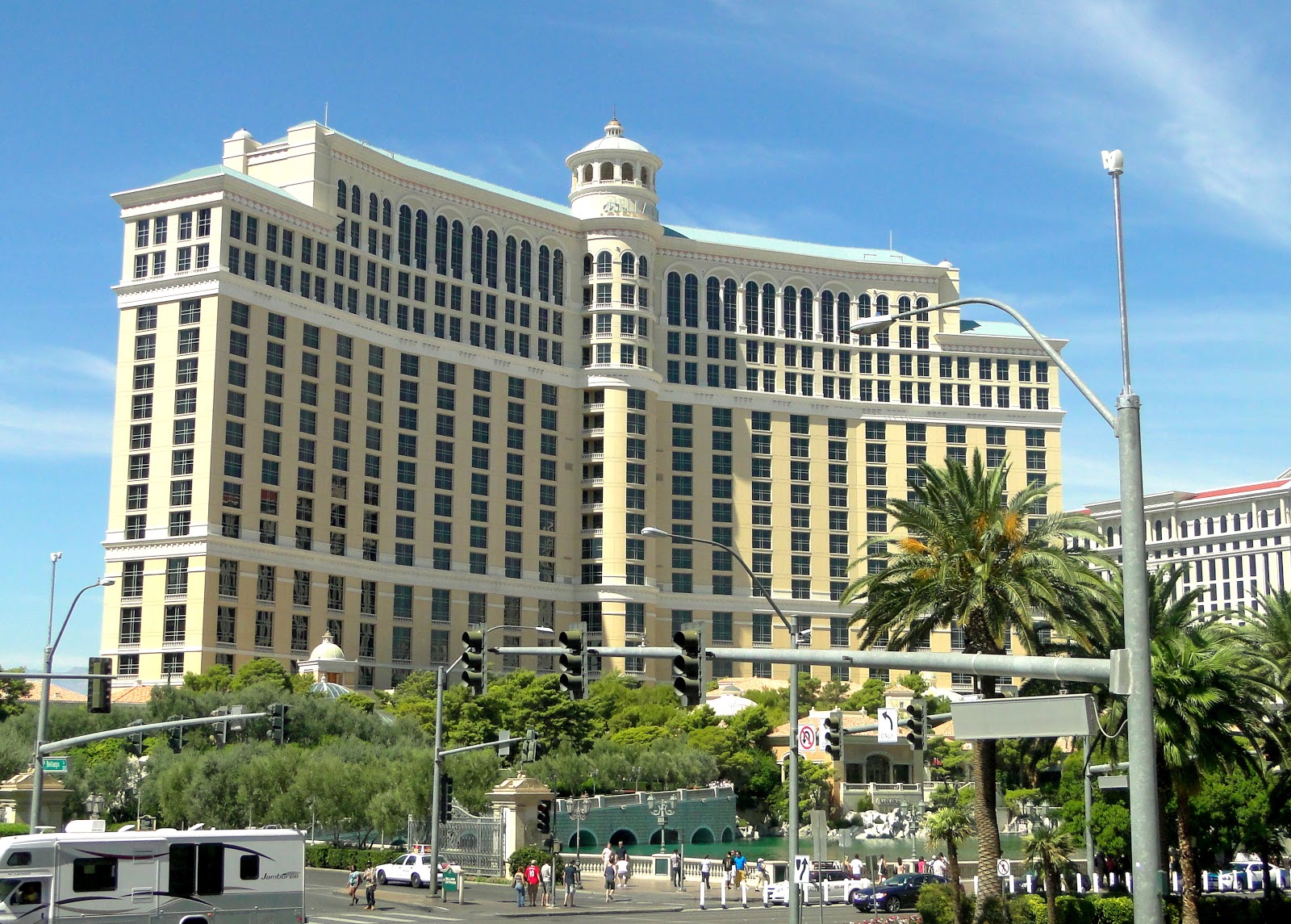 In front of the Vegas Eiffel Tower 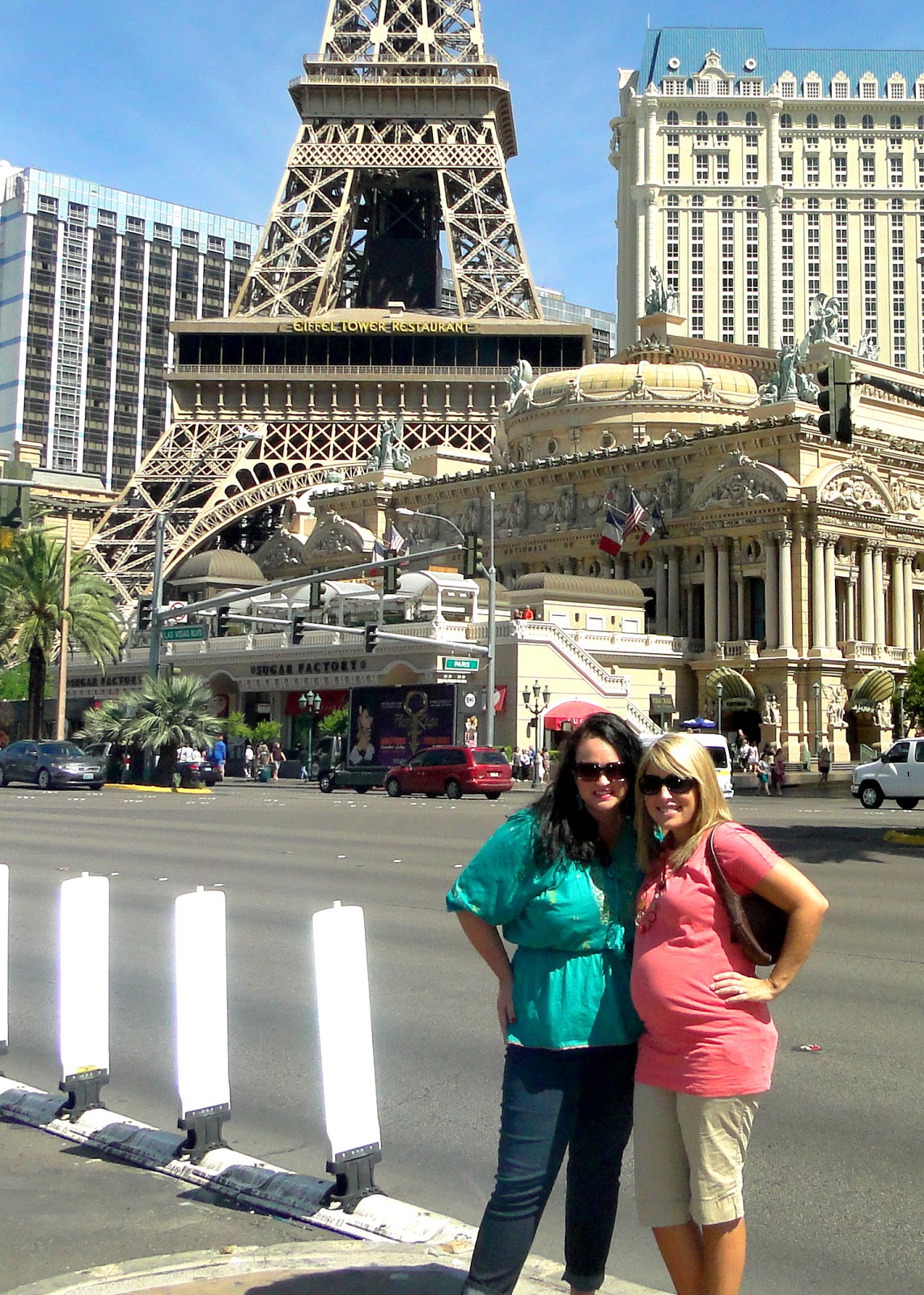 Waiting for the fountain show! 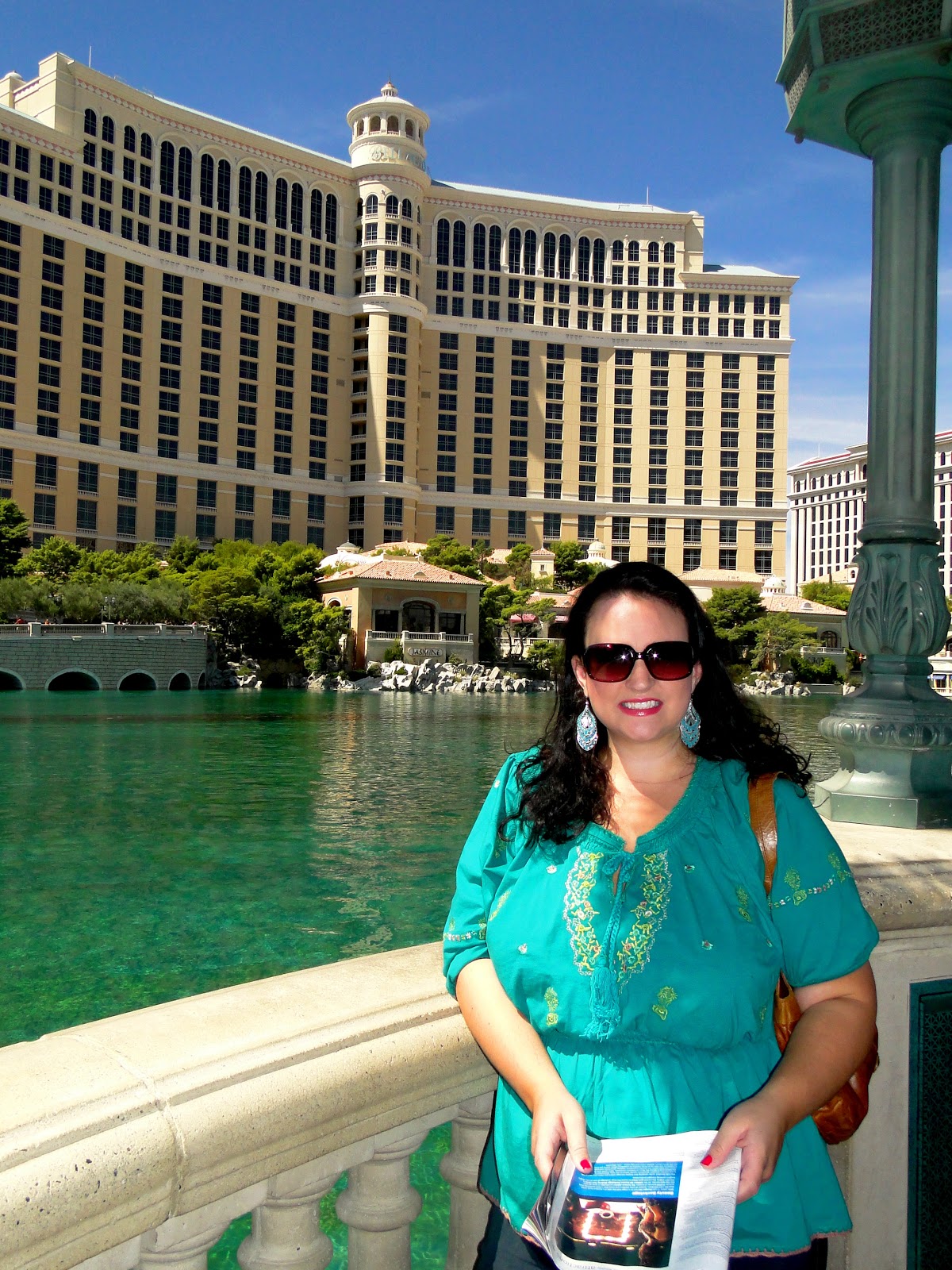 Before going on any trip I always look up the top things to do in that city on Tripadvisor. It gives me a good idea of must-see things! One of the things on the list was to see the Bellagio Fountain show…of course it suggested to see it at night but we figured the day would be better than not at all. Zach and I had seen the show on The Bachelorette this past season so it was neat to get to see it in person! It was SUPER cool…I tried to take a video so you can watch it here. To me, Vegas means Elvis so it was neat that the show included his song 🙂 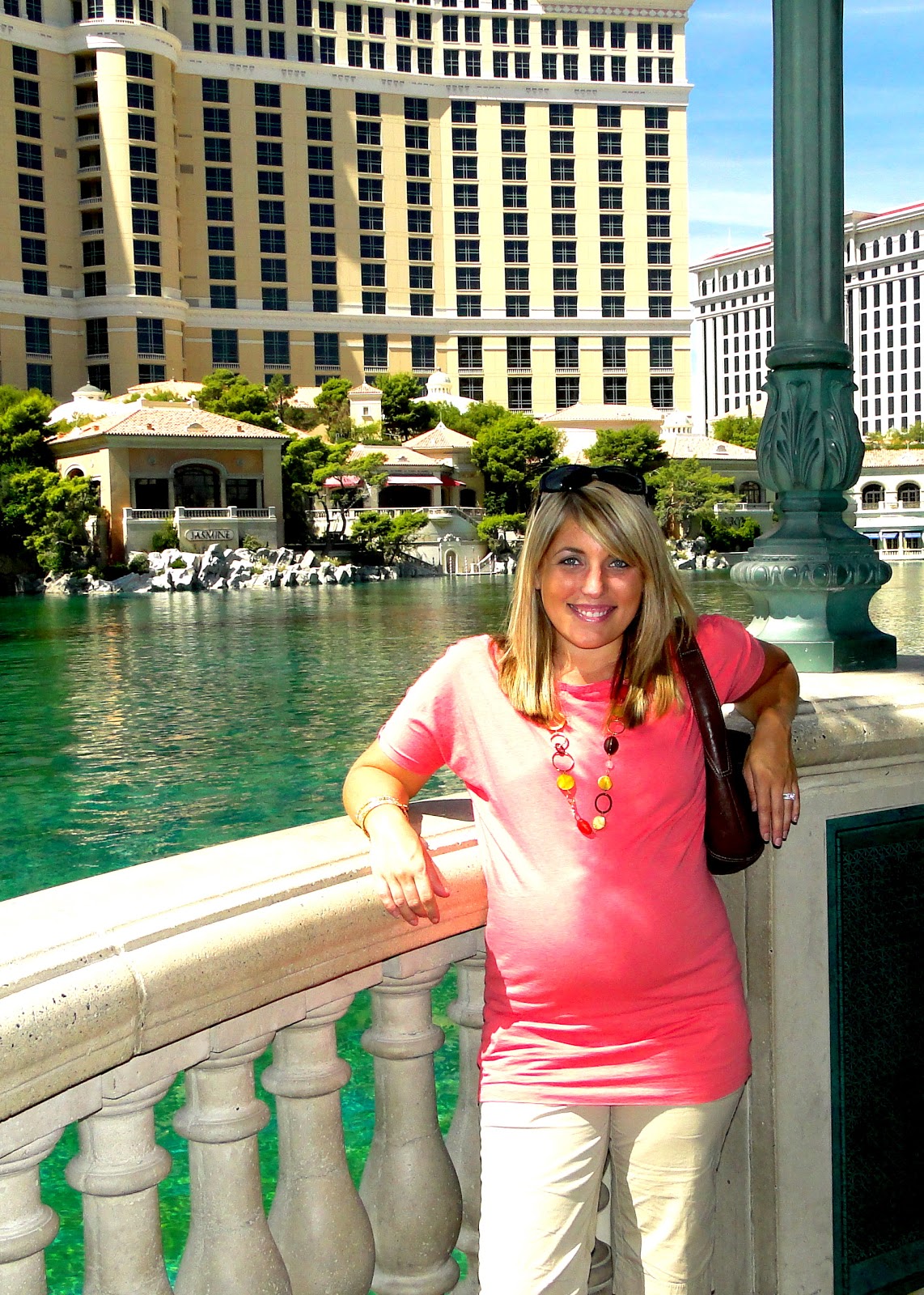 in front of the fountain! 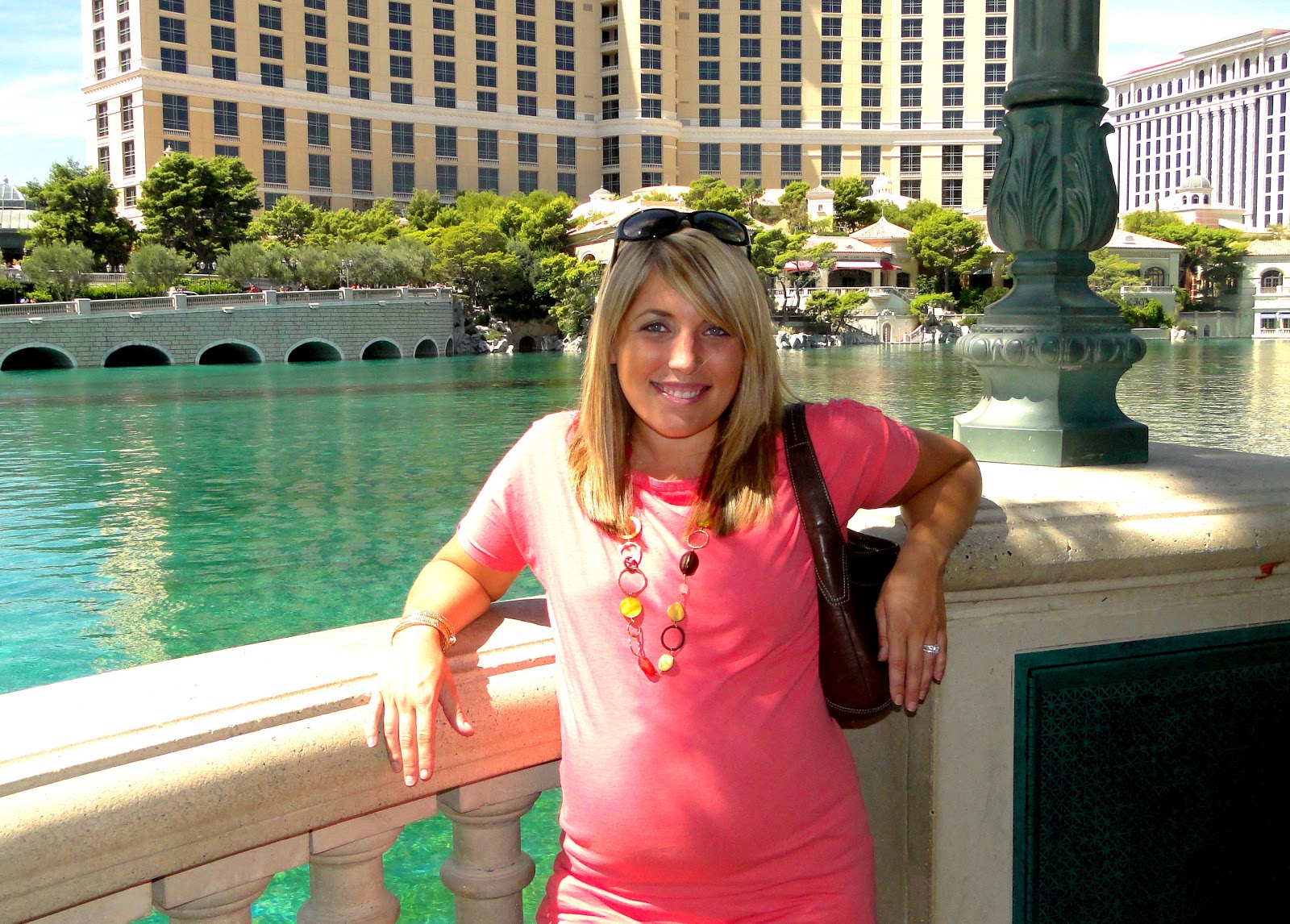 One of the only things I really, really wanted to do in Vegas was meet an Elvis. Growing up my dad was (and still is) a HUGE Elvis fan! I know just about every Elvis song by heart and couldn’t imagine going to Vegas without meeting The King. Luckily for us we ran into one while walking to Caesar’s Palace! He charged us for the pictures with him…but it was worth the $1 I gave him 😉 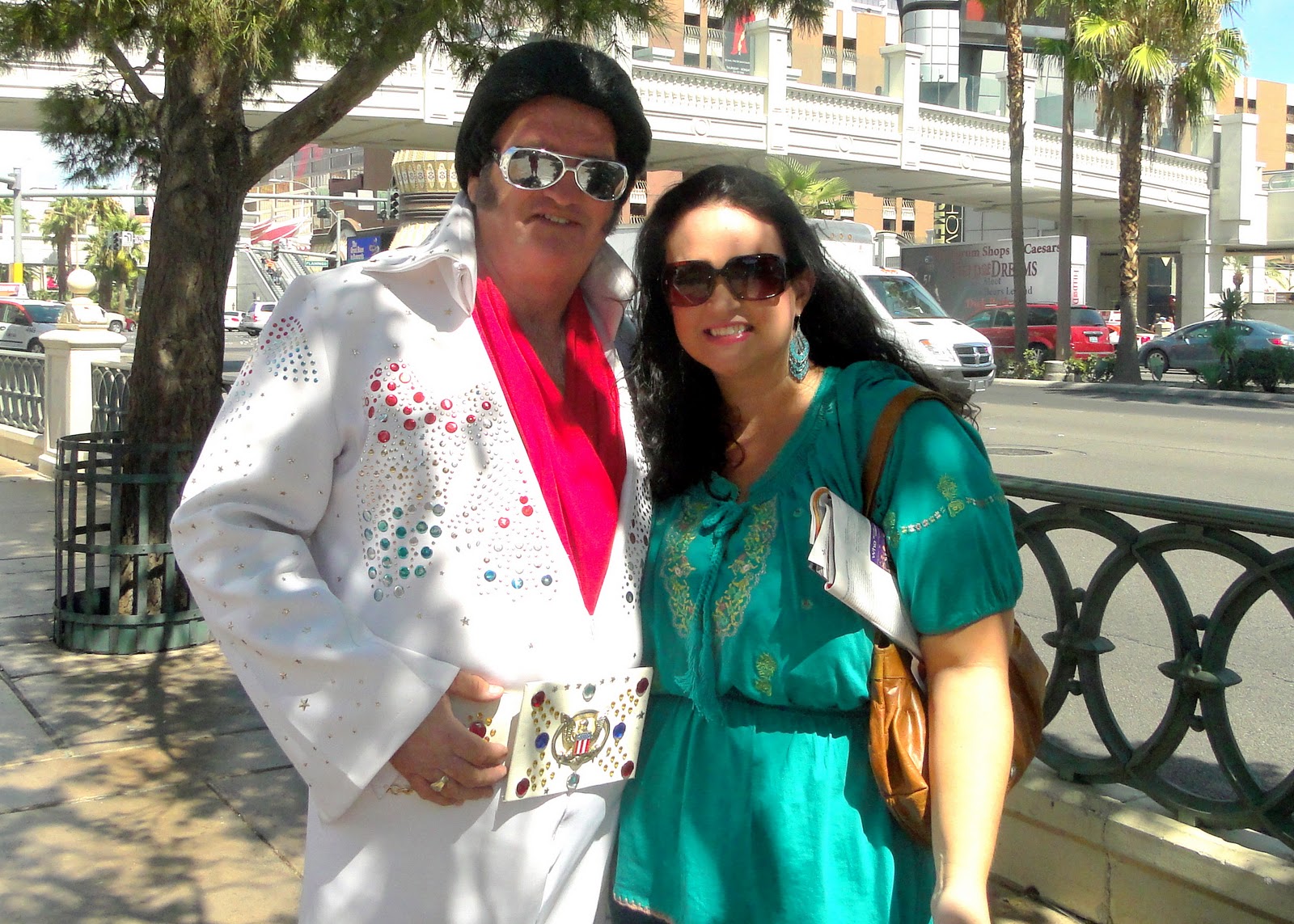 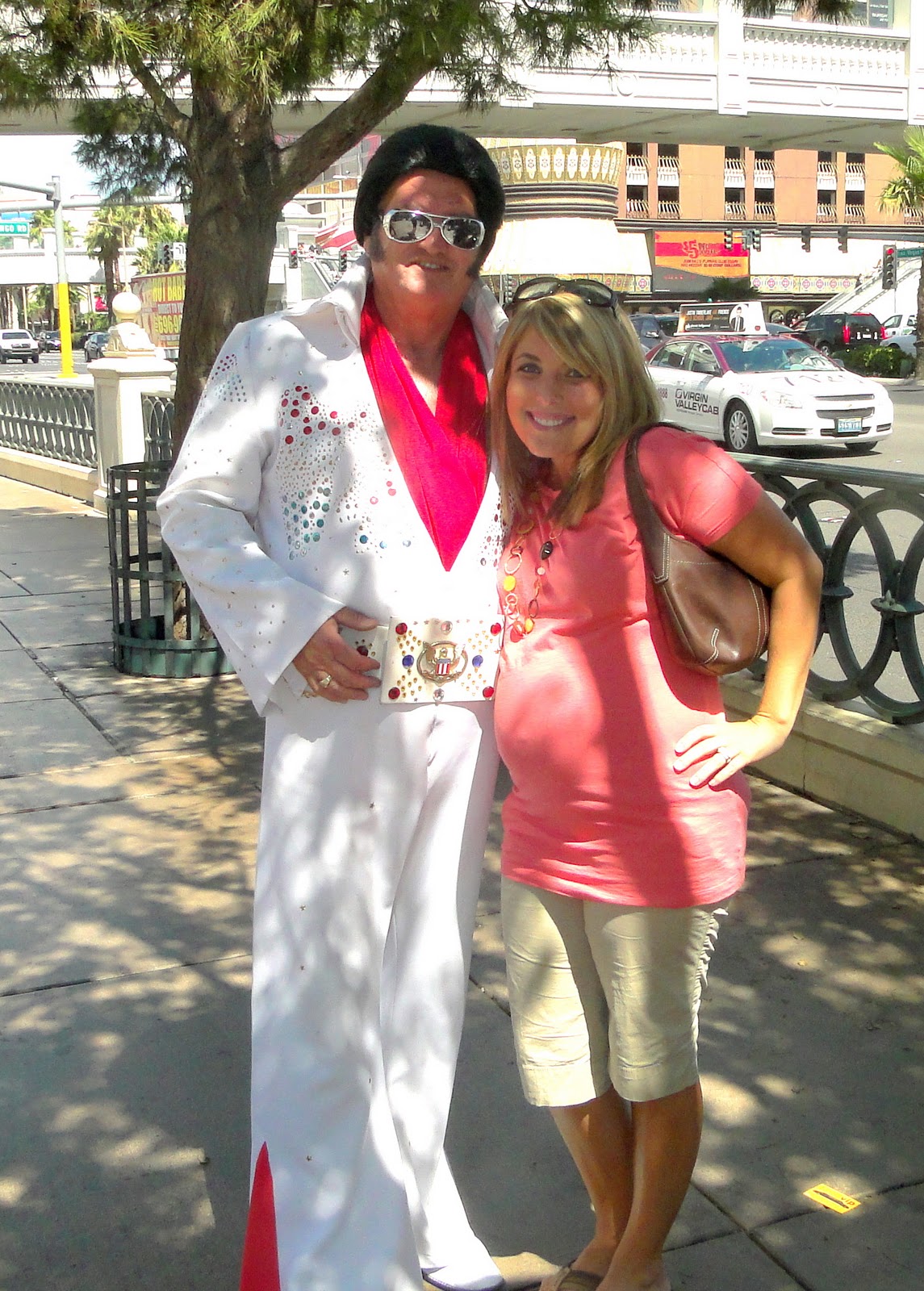 Our next fountain show was at Caesar’s Palace and it was an awesome hotel. Katie and I both LOVED it and I hope if we ever come back that we get to stay there! It was all Roman themed which spoke to mine and Katie’s many semesters of taking Latin in college 😉


Picture in front of a cool fountain 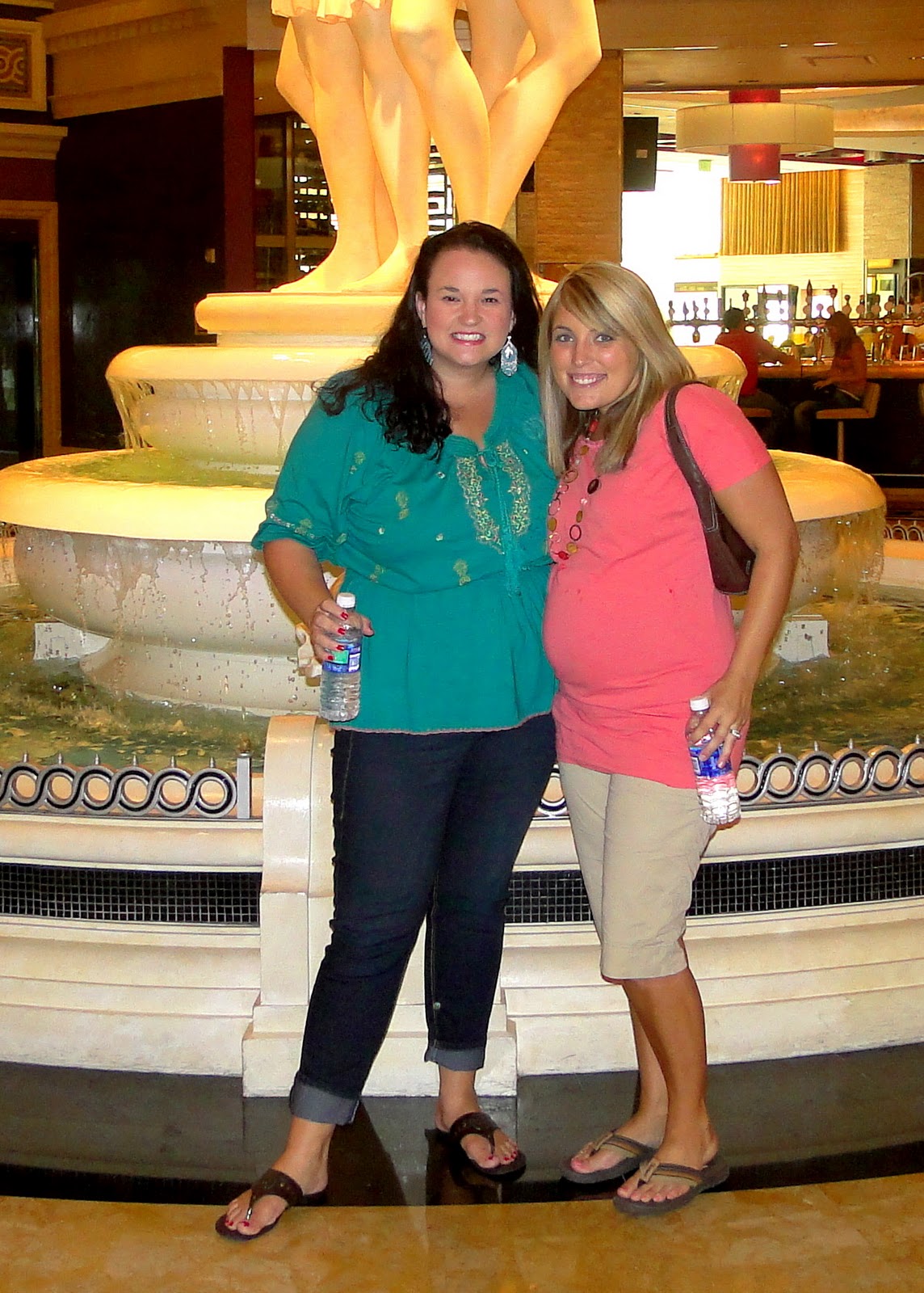 The show there was really neat. It reminded me of a Disney ride! I enjoyed the Bellagio better, because it felt very “Vegas”, but this one was super cool and even a little scary! I took a short video just so you can get the idea of how the figures moved and were really life-like, you can view it here. 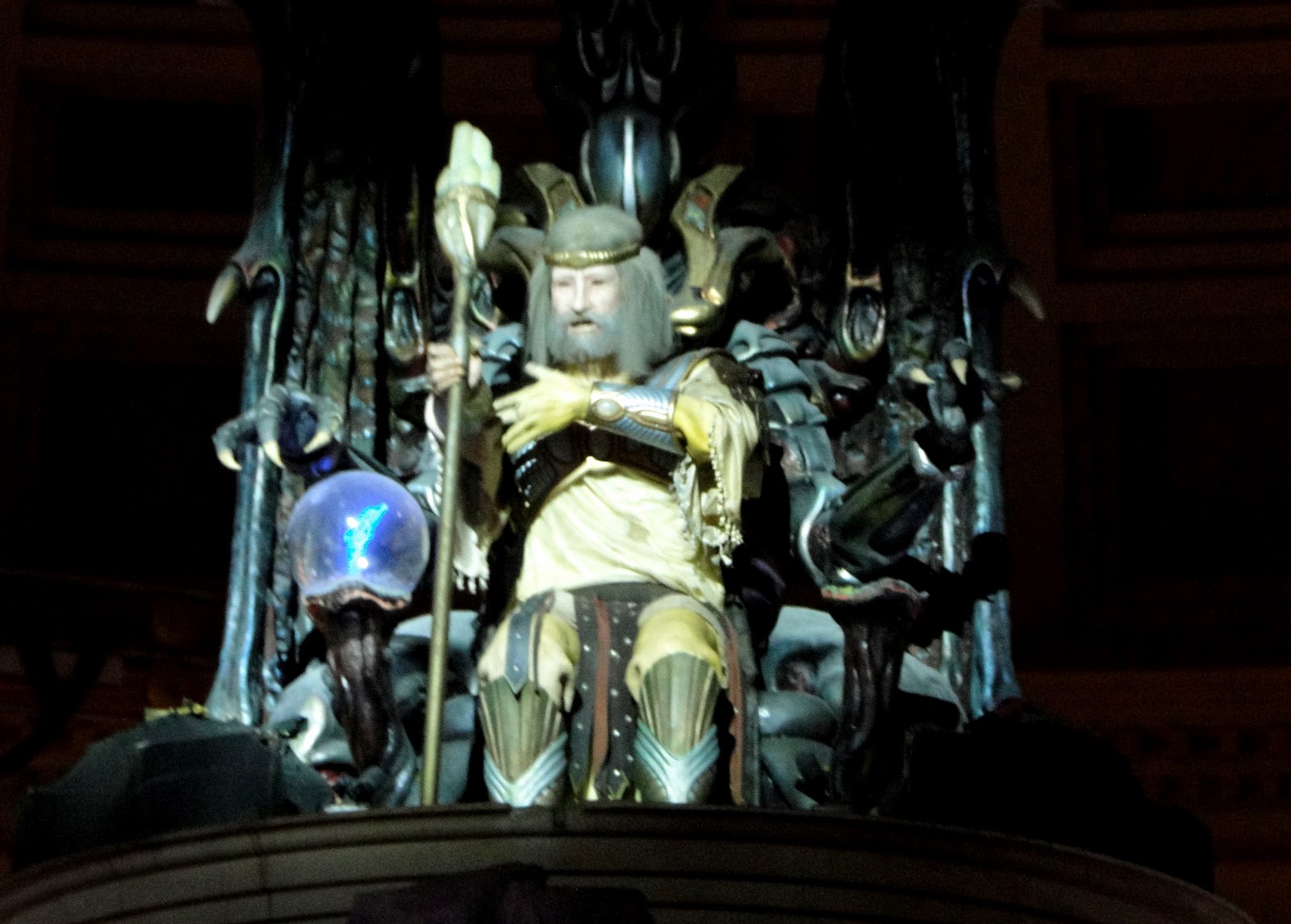 his daughter (who loved ice) 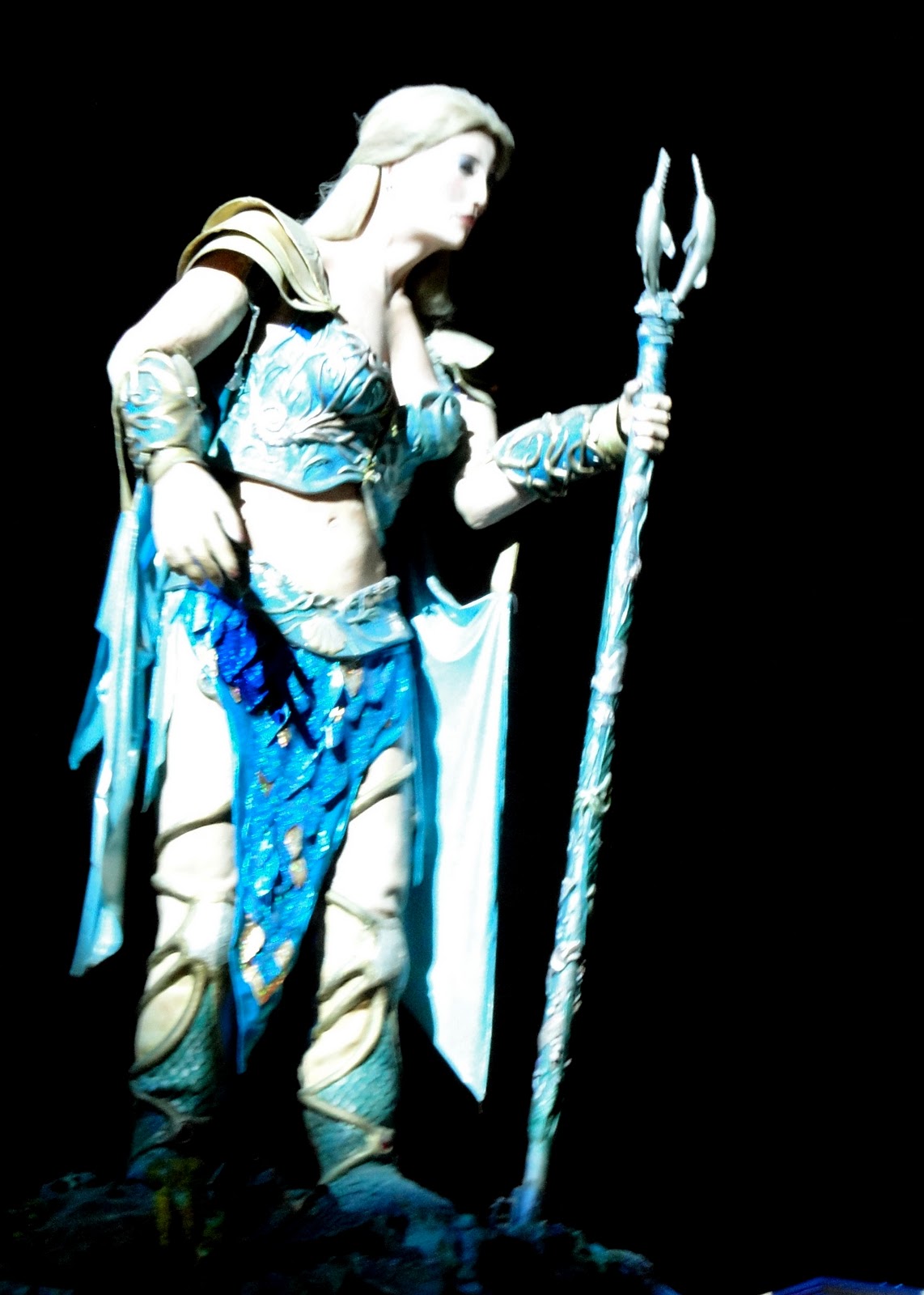 or his son (who loved fire) 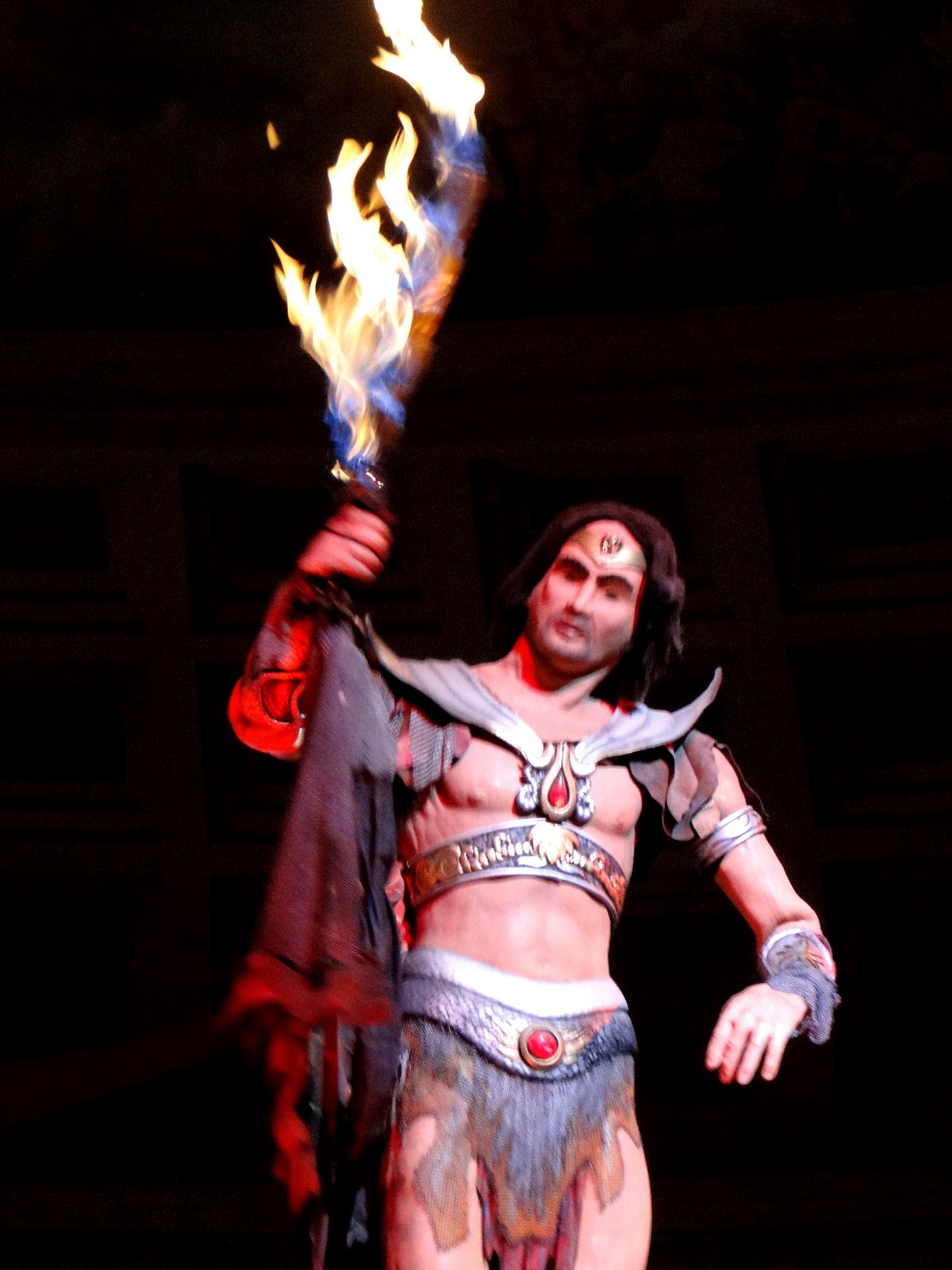 The sound was kinda hard to understand so I’m not sure who won out in the end, but I’m guessing no one since this huge dragon appeared? 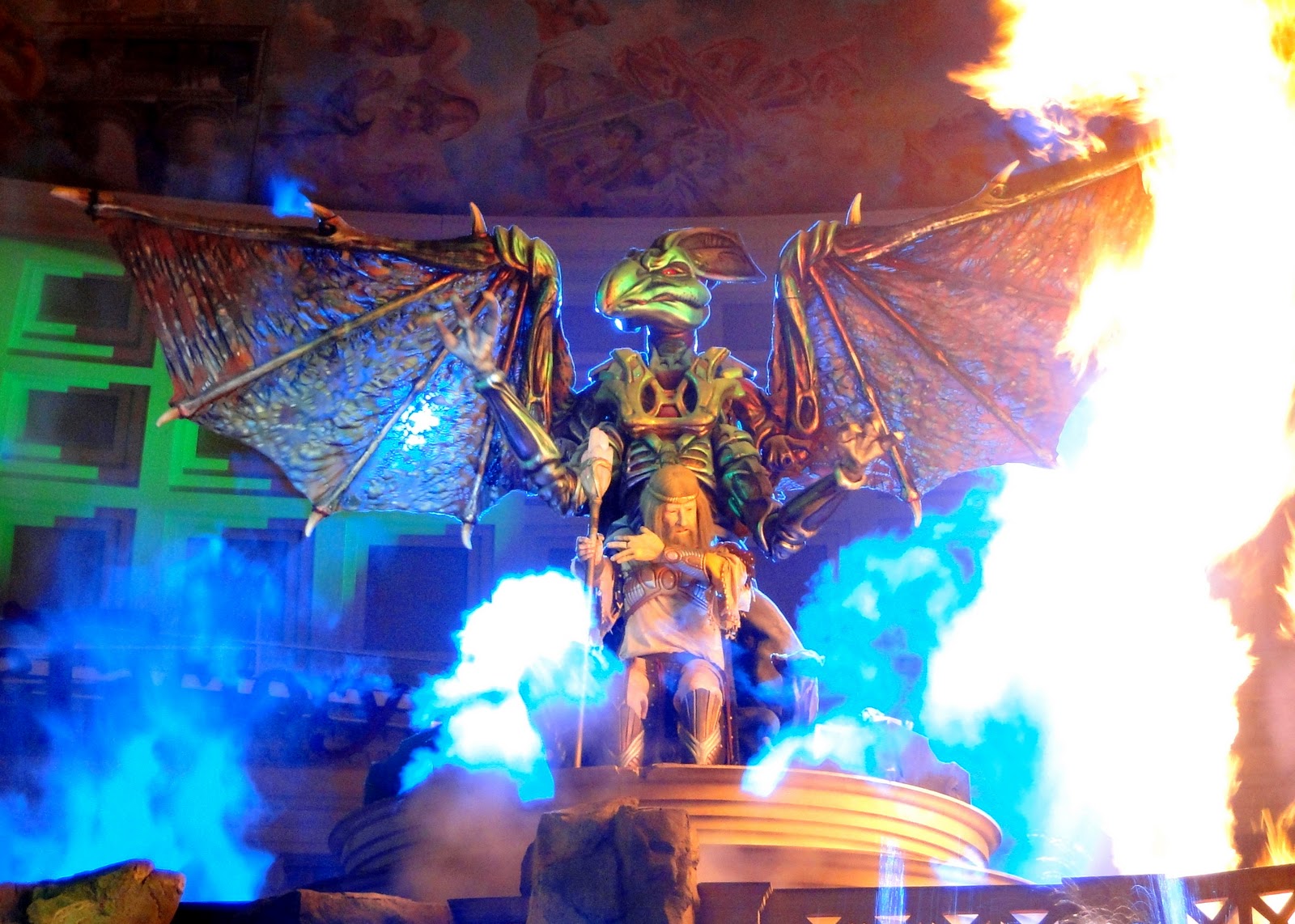 Caesar’s Palace had a HUGE mall area like Planet Hollywood and I loved the “sky” above us everywhere. Made me feel like it was much more open and less claustrophobic. We enjoyed walking around and I even picked up my Vegas souvenir there (a $3 ornament for our tree!)

in front of another fountain 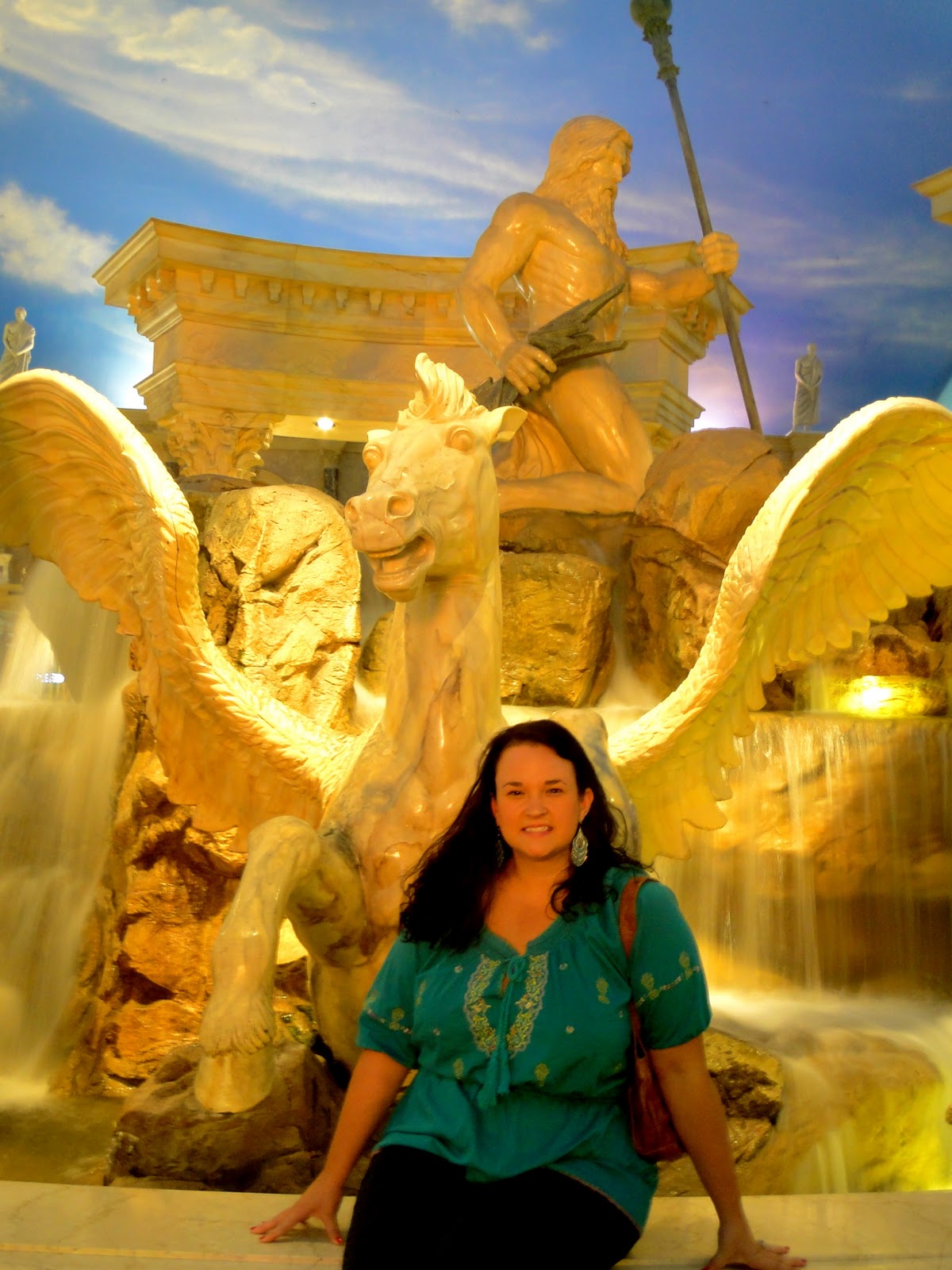 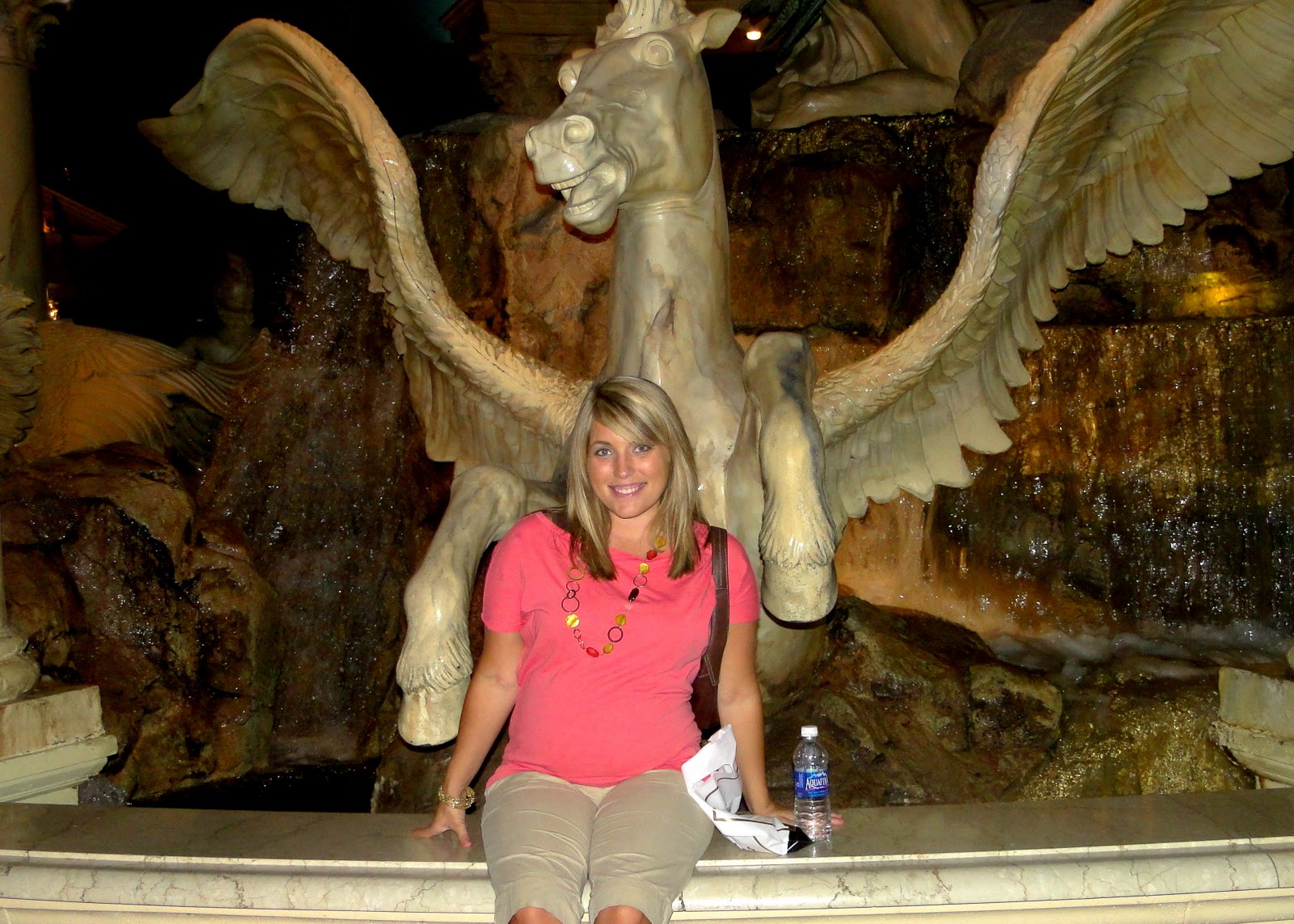 One thing we knew we HAD to do while there was gamble. Only to be able to say we did it. I know some people feel that gambling is a sin, but in my opinion anything can be sinful depending on how far you take it. Me spending $1 in a slot machine then walking away is not anymore sinful than someone spending $1 on a little toy crane game at the mall. So that’s what I did! $1 went in, I got to pull down the lever thing 10 times, I had ZERO clue what was happening, then it ended and I was without my dollar. 🙂 Still cool to say I’ve gambled in Vegas though! 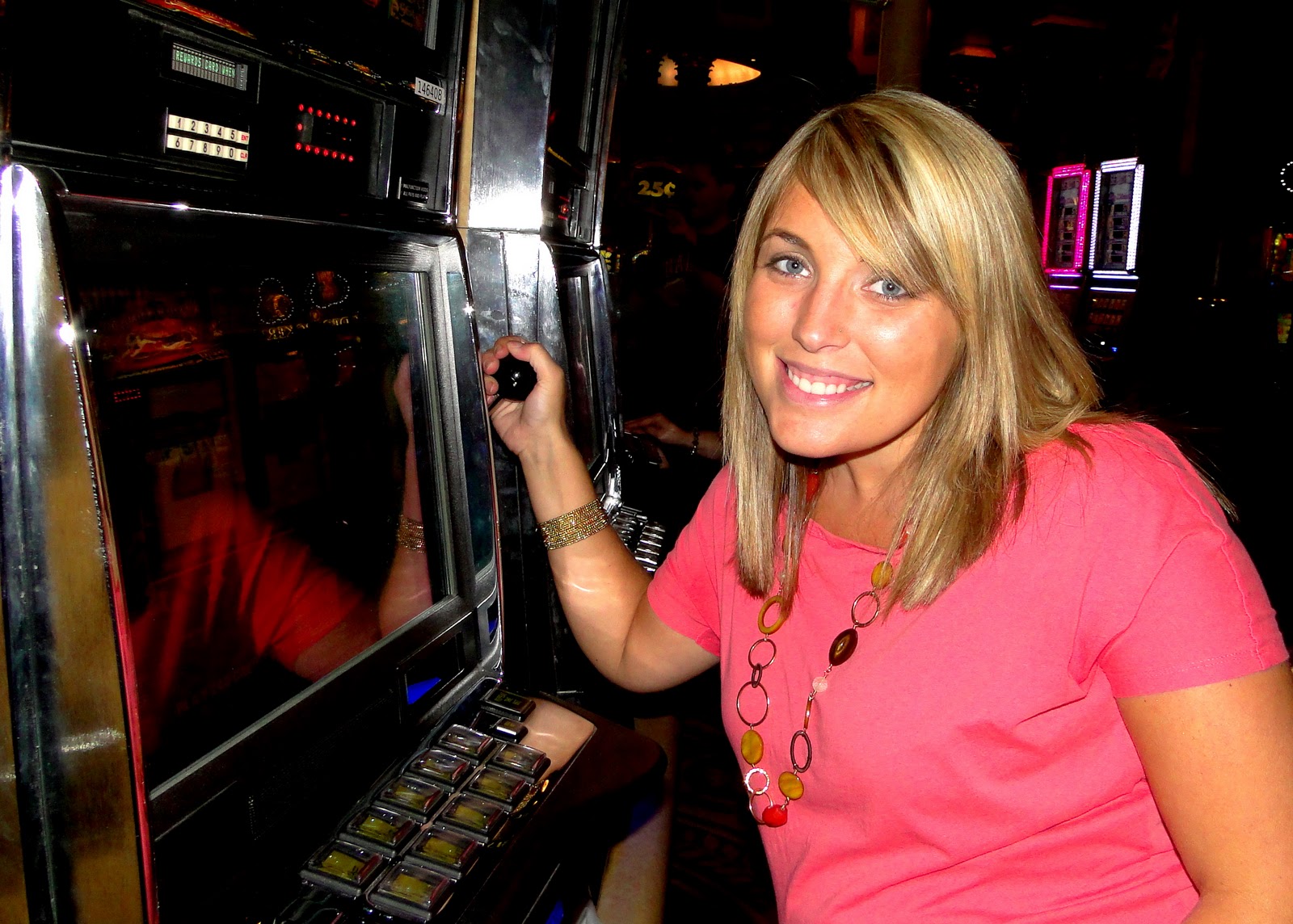 Katie was Lady Luck in our little duo…the first machine she tried the lever thing didn’t work and it was mega complicated so she tried one more slot machine and WON! 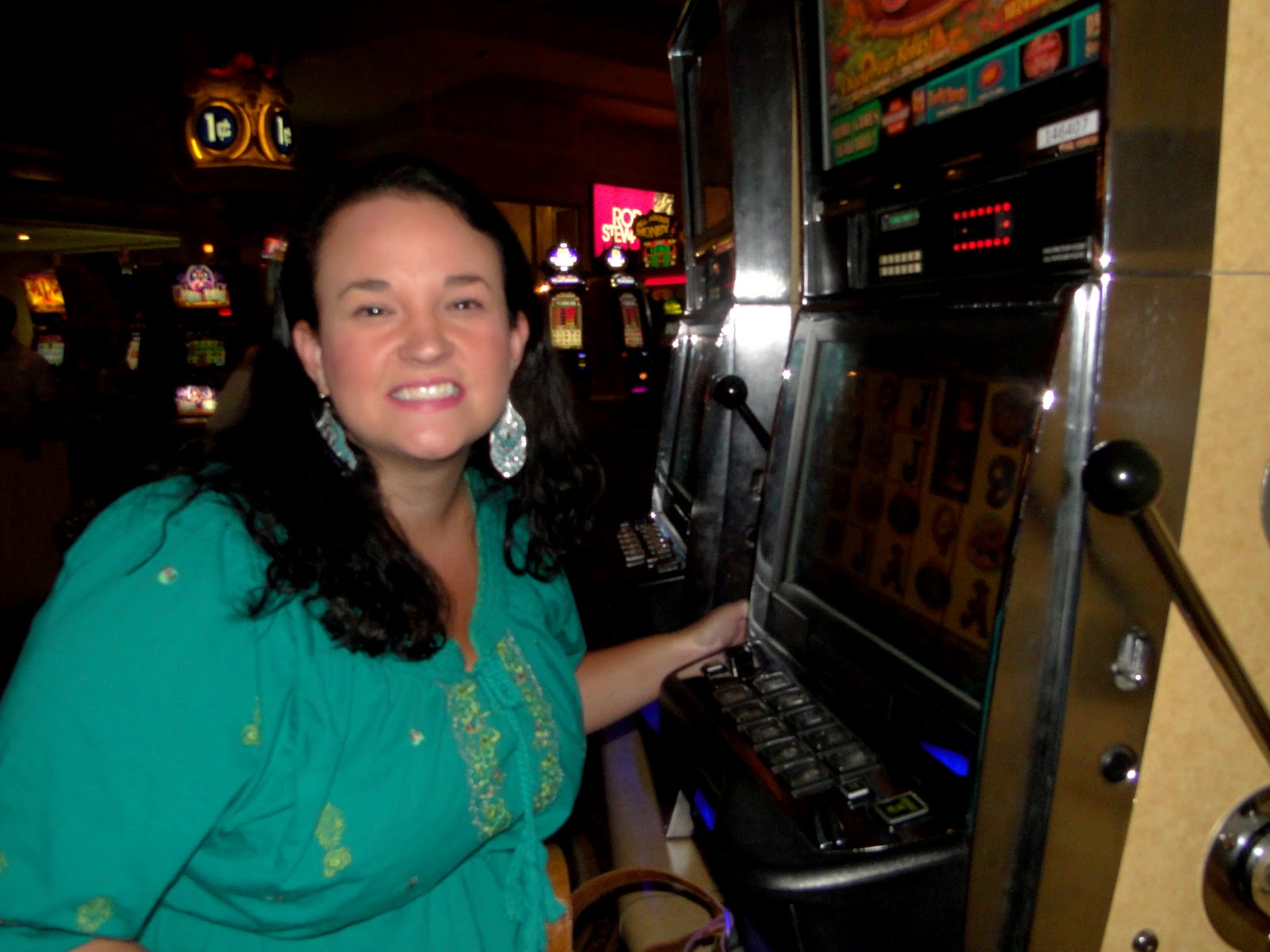 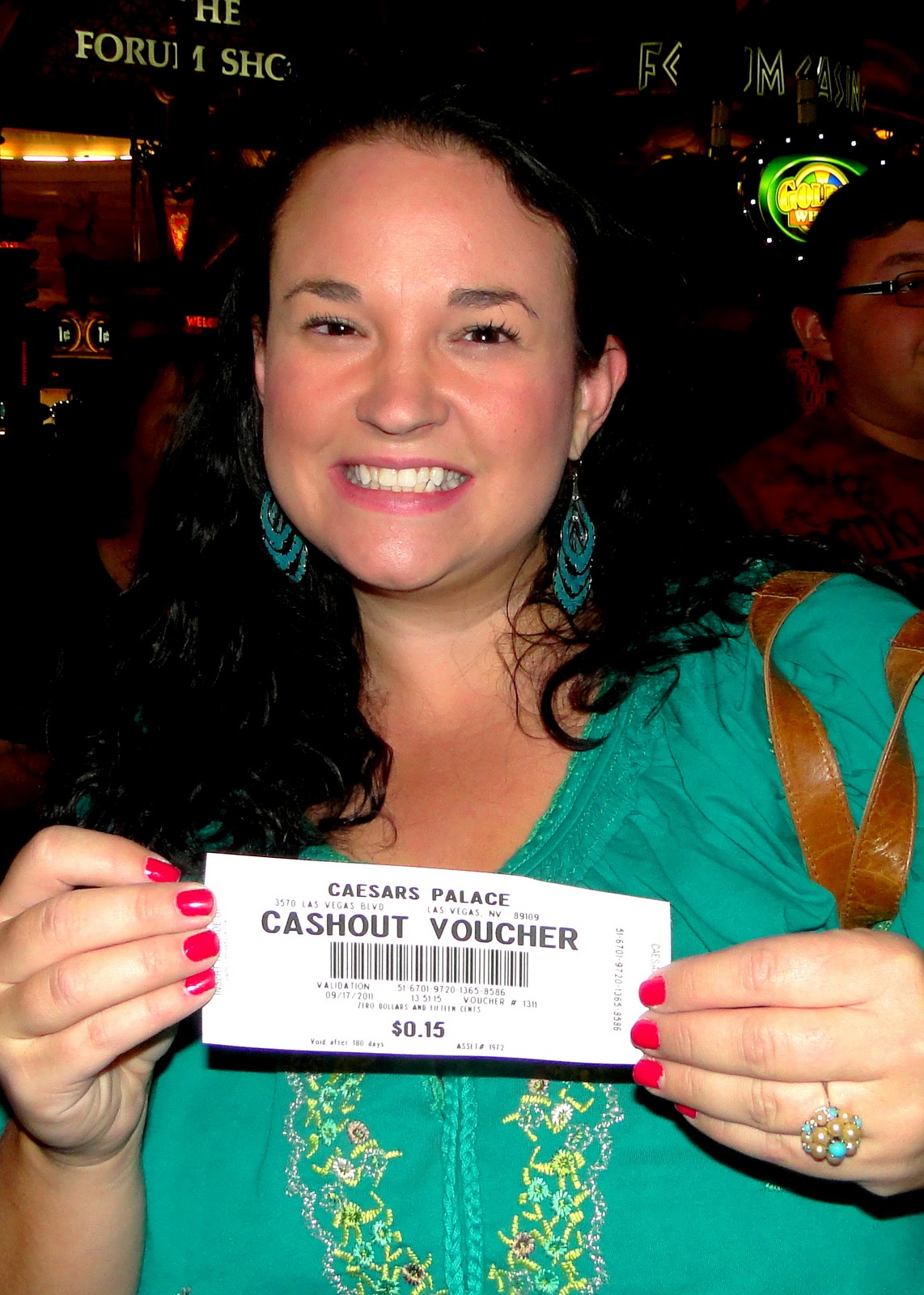 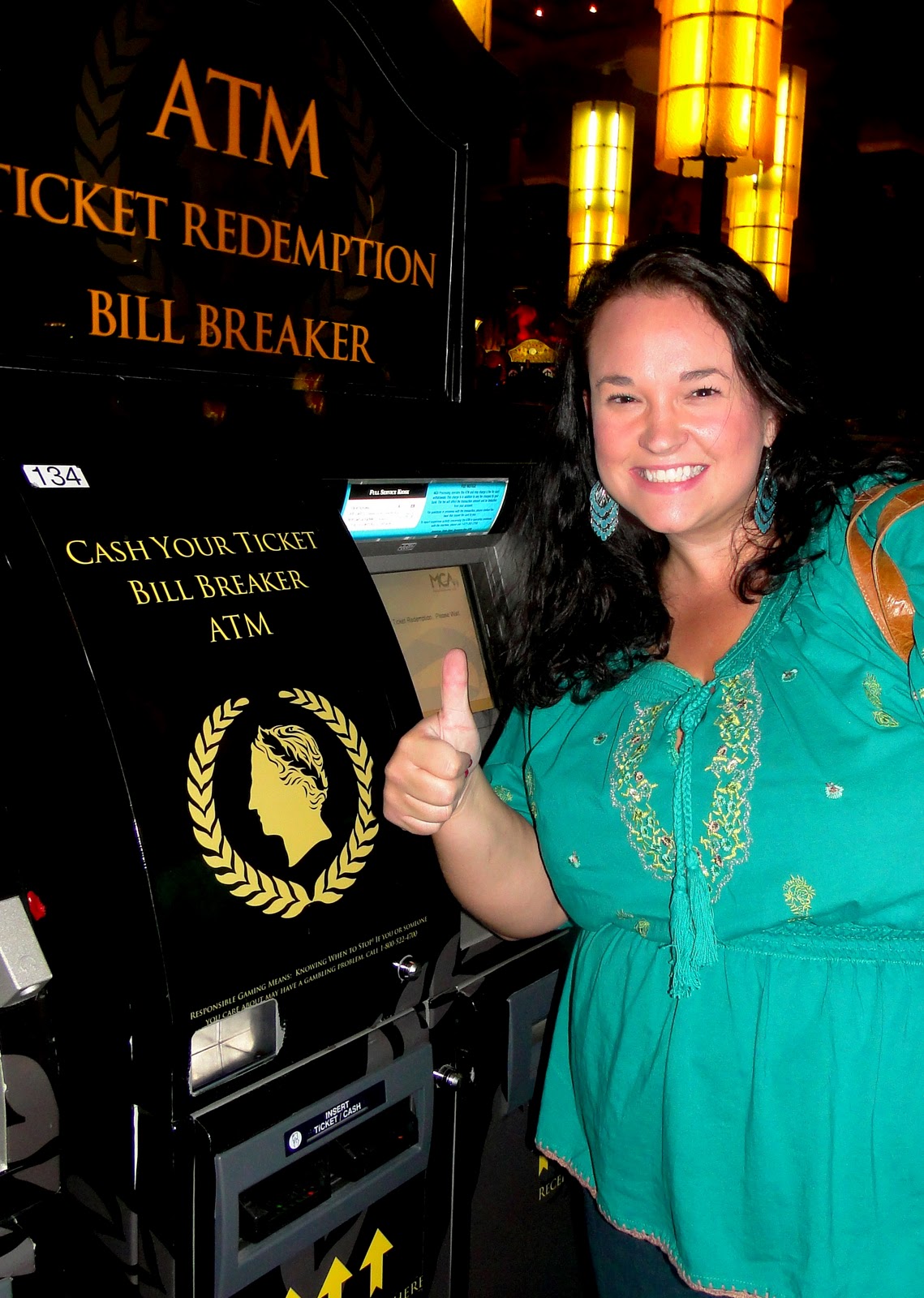 Growing up my parents had a little Statue of David displayed on a shelf somewhere (probably a souvenir from one of my dad’s business trips). In college at some point Mom gave it to me and it became a running joke between Zach and I. Zach can’t stand it b/c it’s a naked man and he does not want it displayed in our home. So, of course, I’ve enjoyed years of hiding it in random places and letting him find it. It’s pretty funny (I totally need to start doing that again!) and I had to get my picture with David when we saw him while waiting in the taxi line! 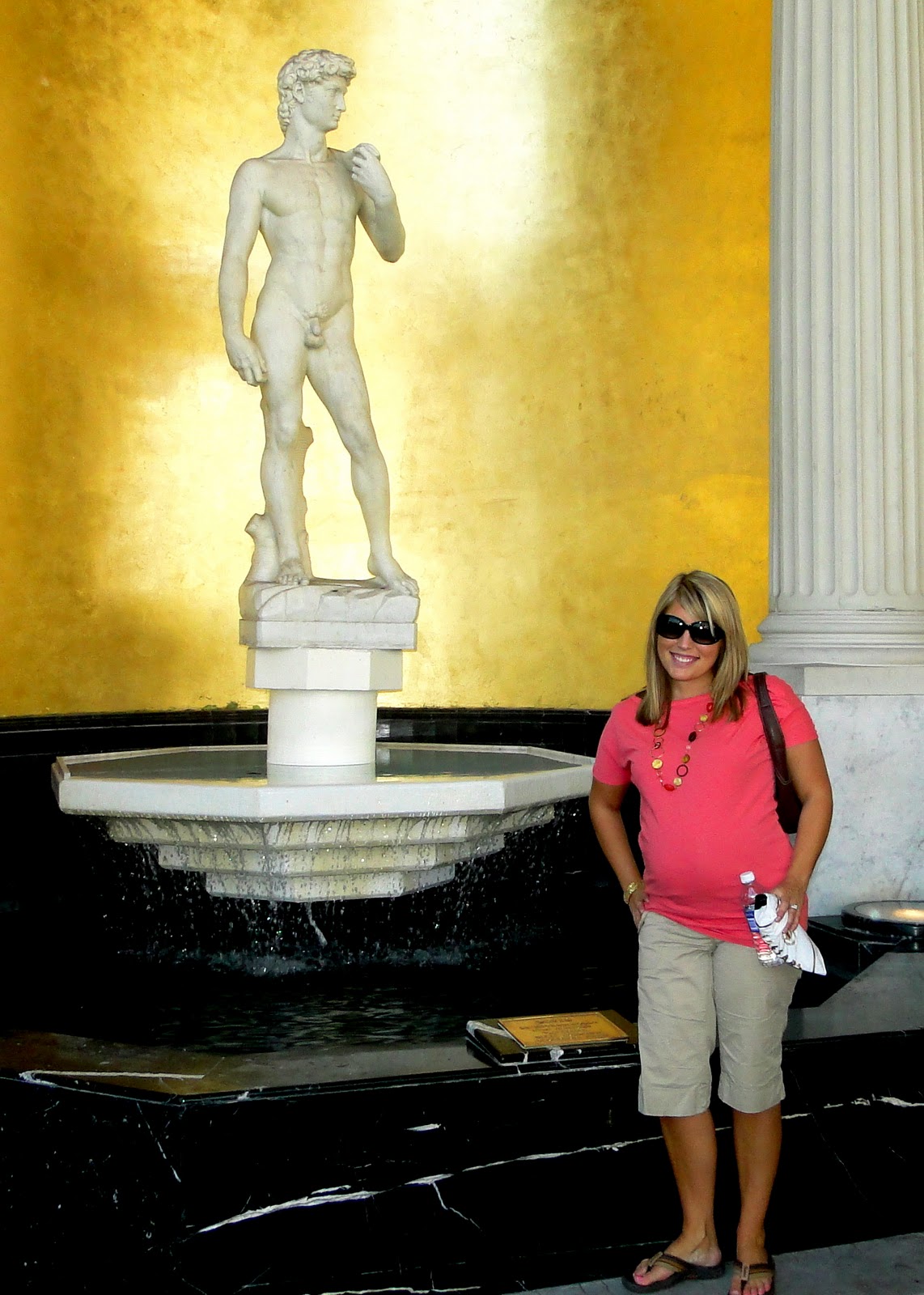 Back at the hotel Katie wanted to try one hand at Black Jack. I would have played one too, but I have no clue how to play! We found a $5 table and she played a hand…and WON AGAIN! How crazy is that?!?! She paid $5, got back her $5, and won $5! Pretty awesome!!! 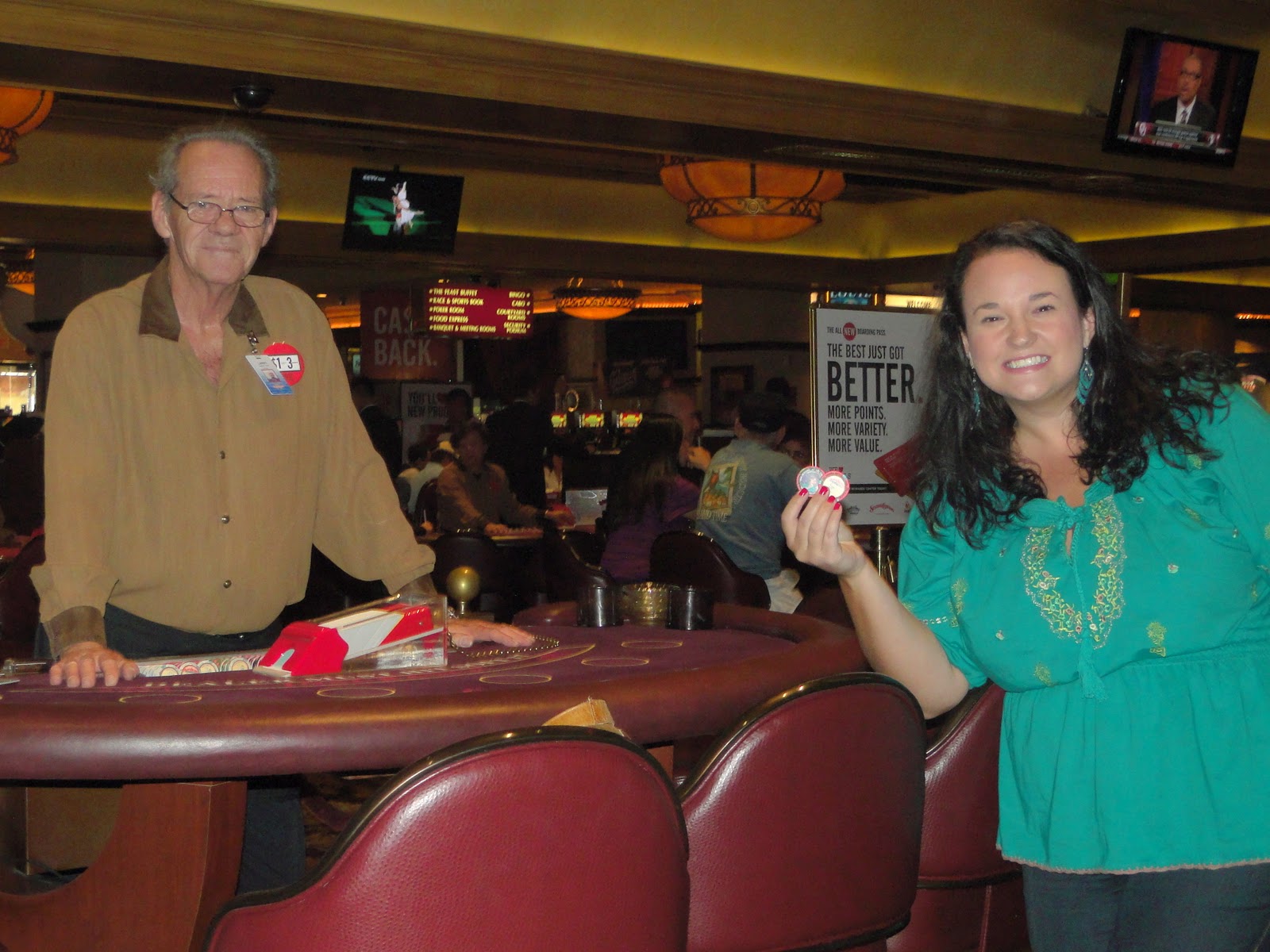 Since our flight was at 7:45 that evening (Vegas time…which means 10:45 Ga time…) we just relaxed in the room for a little while and caught the 5:00 shuttle to the airport. We ate dinner there (at California Pizza Kitchen which I LOVE LOVE LOVE!) and had time to pick up Kye a little something for a present (I got him an Elvis bear beanie baby). On our way to the gate we saw this sign…we TOTALLY forgot to over-use this phrase while on our trip dangit 😉 We did see a bib in a gift shop that said “I’m what happened in Vegas.” Made me laugh! 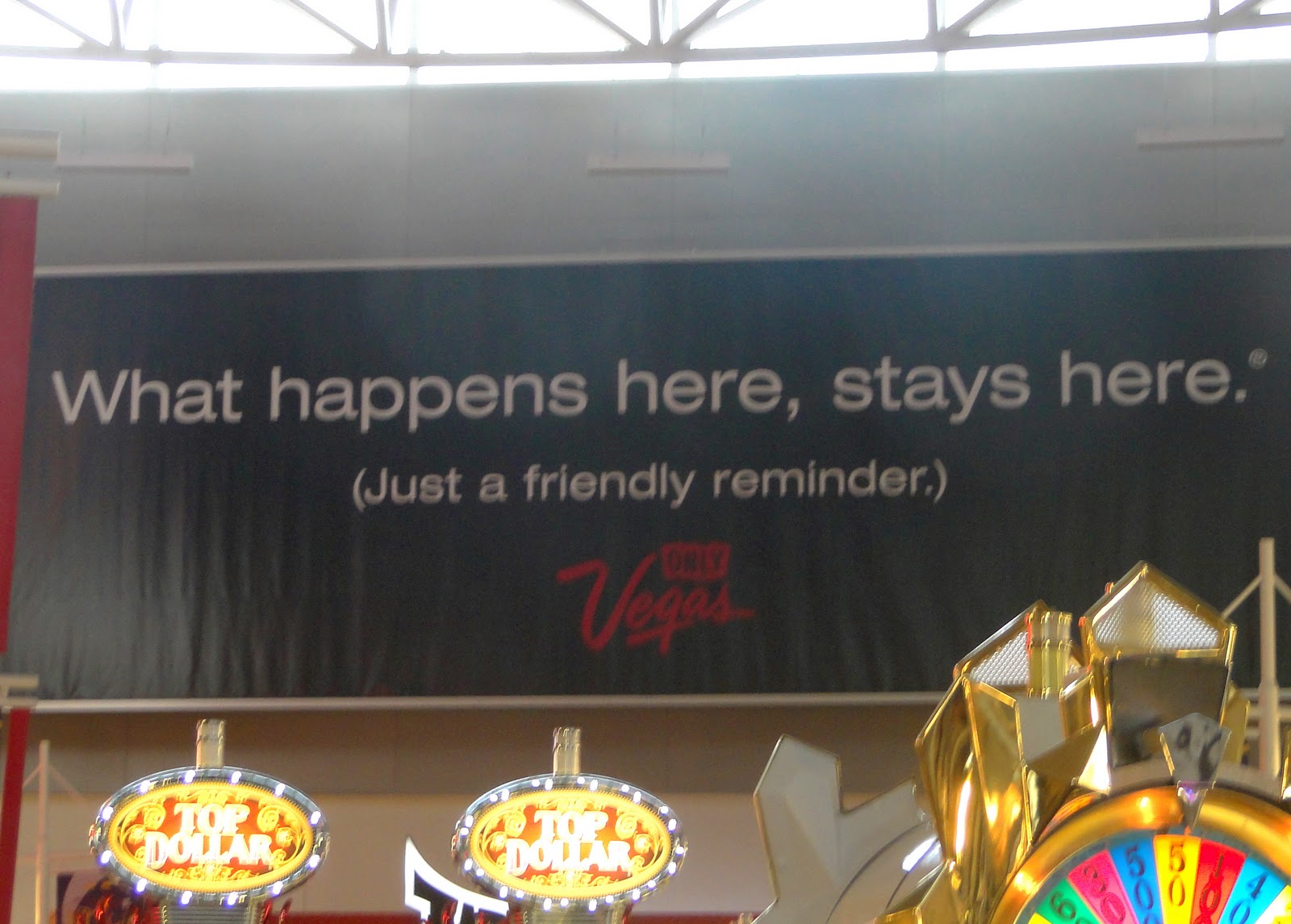 The flight home was tough. We flew out at 7:45 pm Vegas time on Saturday, had to stop in LA for 2 hours, then to Atlanta with another 2 hour lay over (we got to Atlanta at 7 am GA time), then got into Valdosta at 10:45 am on SUNDAY. Katie was an a-mazing travel partner!!!! She helped me a TON and was SO patient with me. I’ll be flying the same flight (except longer) on our way home from Hawaii so it was good practice. I slept the entire time on the plane ride and it caused my legs to swell even while wearing the compression stockings. I’m thinking for Hawaii I probably need to set a timer to get up, drink water, and walk around a little bit.

Katie and I both had a BLAST on the trip!!! It was a GREAT experience and even though we weren’t huge fans of Vegas it’s great to say that Katie had her first flight, we got to visit Sin City, and we had some super fun girl time! Being a wife and mother I don’t get lots of quality girl time like that so I ate it up! I’m so thankful to have Katie in my life and SO SO SO glad I won that bet with Zach so we were able to go!!! Hopefully it won’t be our last trip to The Vegas Bash…if Jeff ever does go we will find a way to go back!!!!