The morning of the 24th Zach was already feeling better from his surgery the day prior. His back was pain free but he was also on a ton of meds so I didn’t have my hopes up yet that the surgery was successful (I’m a cautious person when it comes to get excited). The Parker craziness at Christmas time slowed down a LOT this year. I don’t know if it was due to Zach’s surgery or just other factors but it seemed a lot less rush-rush-rush. We had to miss out on the Parker Dinner (the one with ALL the people somehow Parker-related) since it was the night of the 23rd, the annual football game somehow didn’t happen, and we went to visit Little Mama and Big Daddy at lunch rather than them having some big Christmas Eve dinner. It was nice because it gave us more time to spend over with Kye’s grandparents and focus on their traditions with him and his cousins ya know? Although this year we also didn’t do the ginger bread house contest…next year we’ll all be back on track I promise!
One of the ONLY Christmas decorations we got out was our little Christmas Countdown Calendar thing. And even that I didn’t stick to! On Christmas Eve we had about 7 left to put up haha. Oh well, I’m tellin’ ya next year’s gonna be awesome 🙂 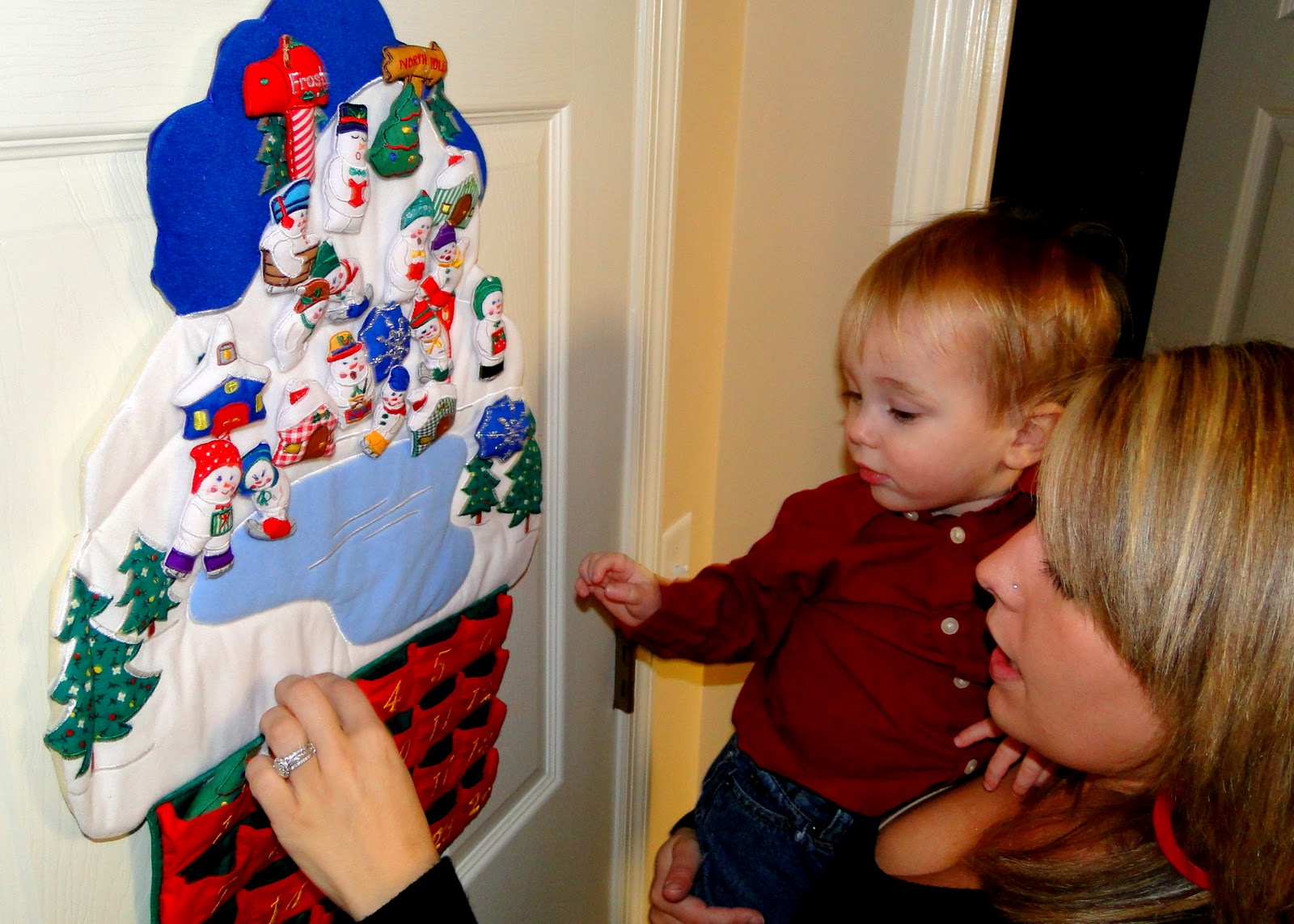 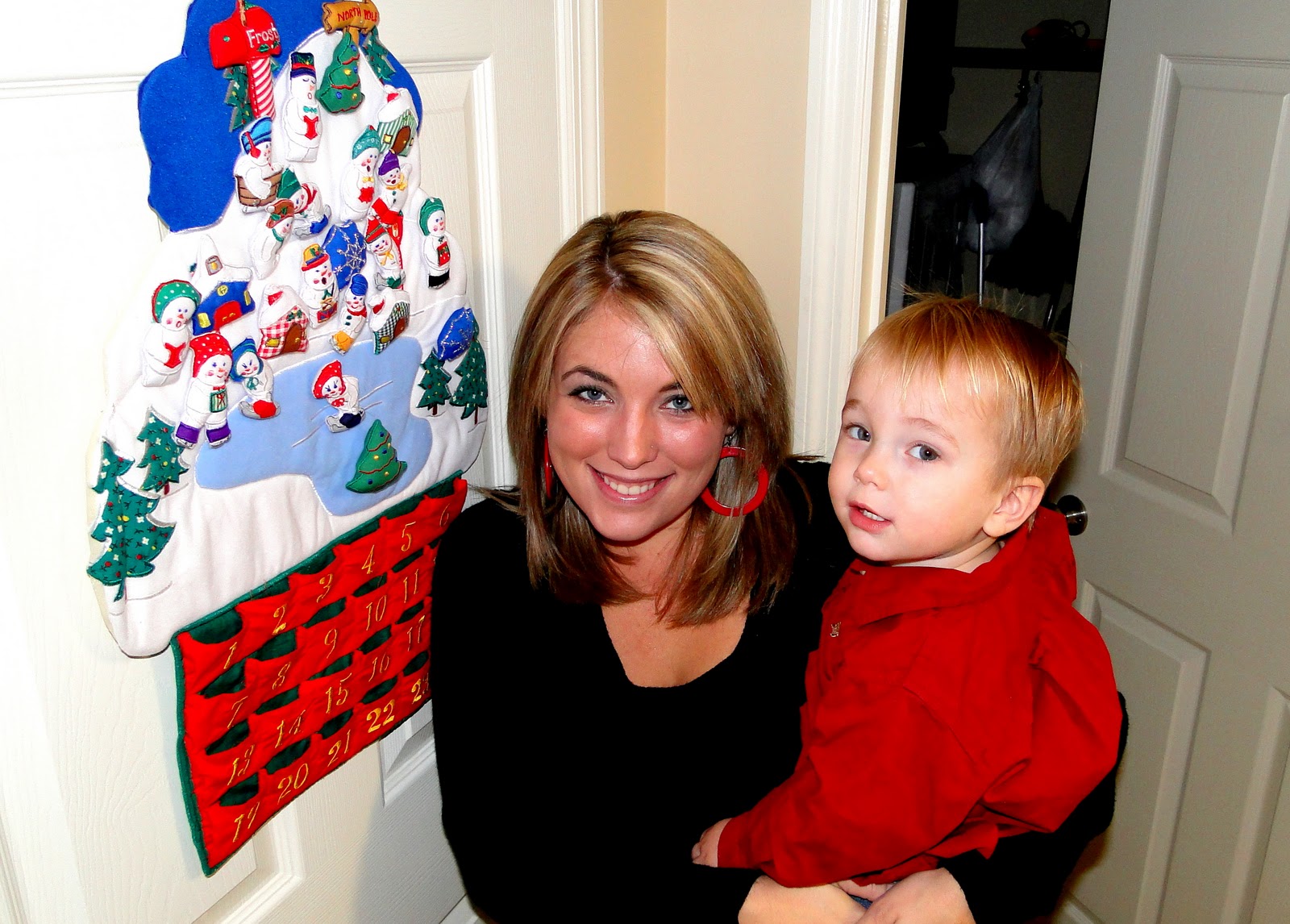 Over at Little Mama’s and Big Daddy’s the kids had a BLAST and it was nice to just relax and let them play and visit. Little Mama and Big Daddy don’t often get to see all three of their great-grandchildren together like that so I think they enjoyed it.

It’s funny b/c in most pictures it’s Kye and Payton when in reality Kye’s always with Colt…Colt just hates getting his picture taken (how would I survive if Kye was like that?!?!) 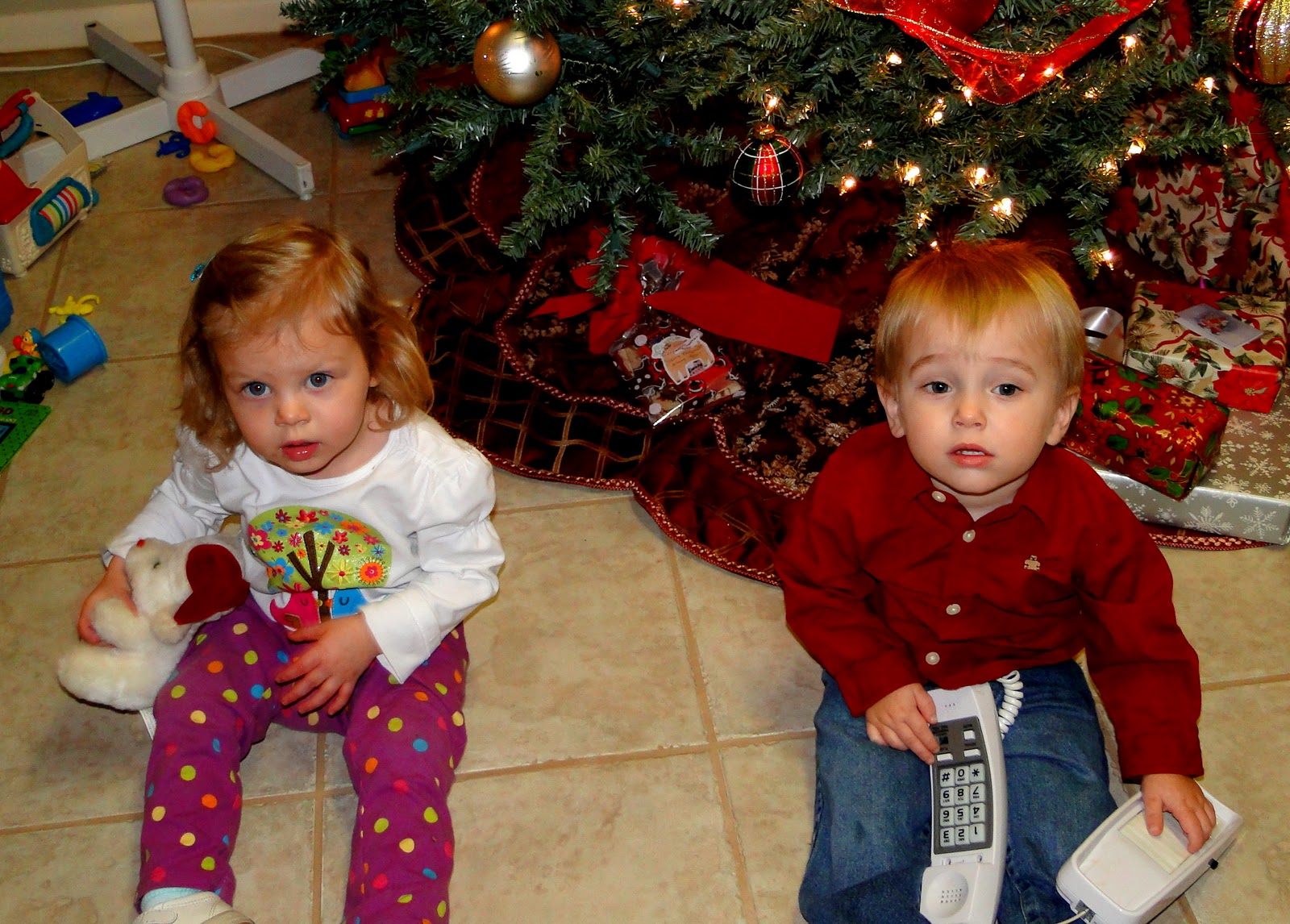 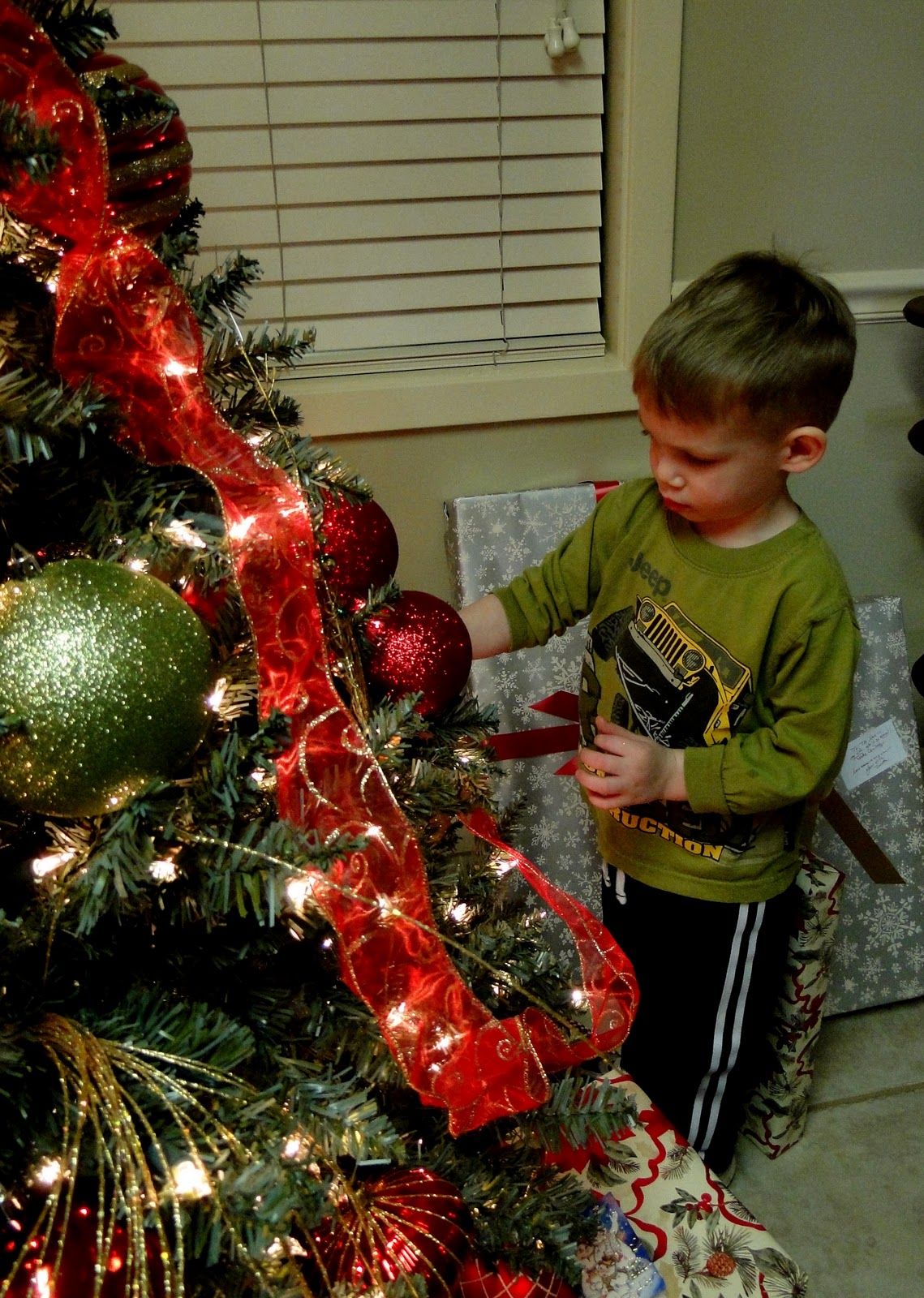 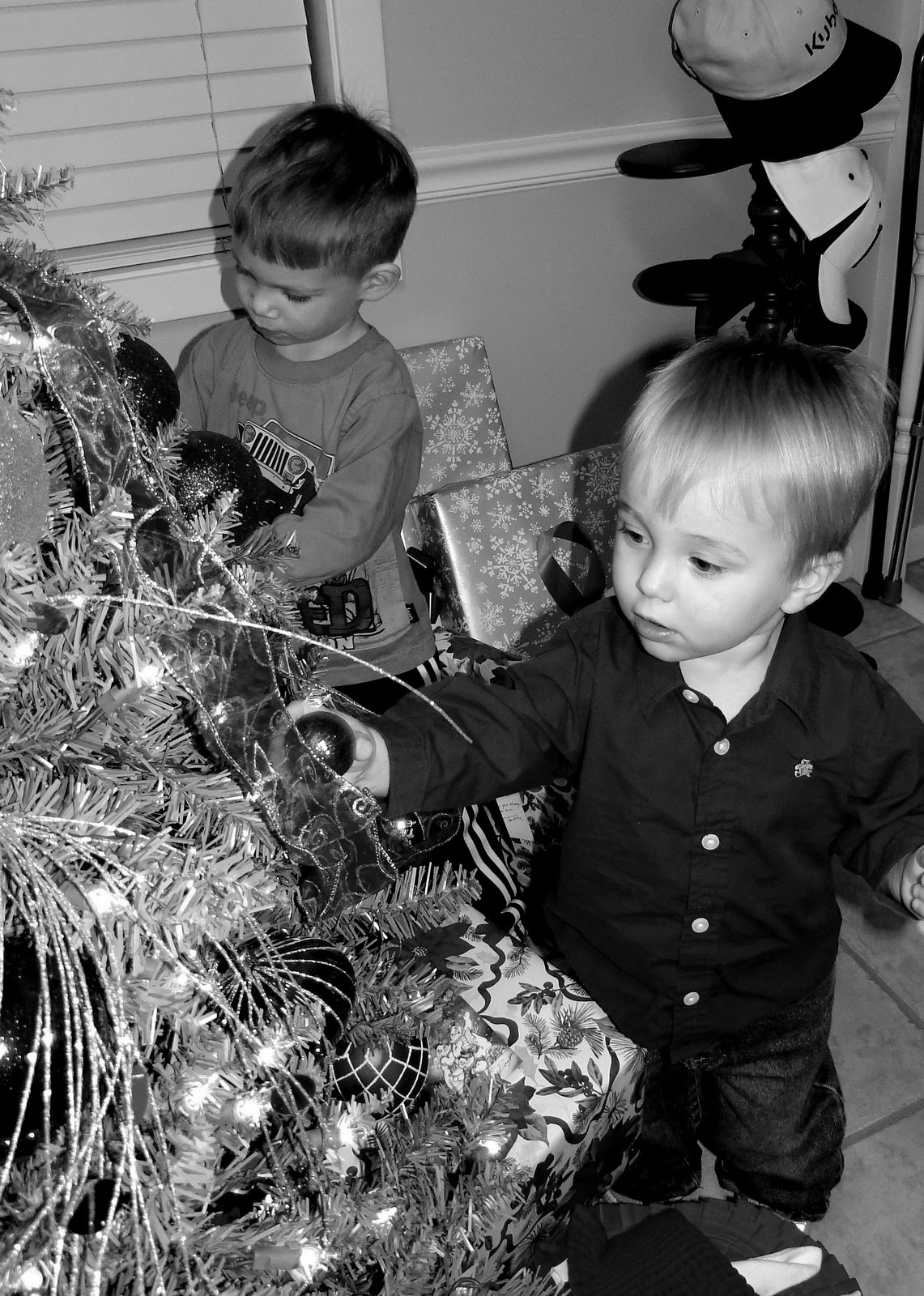 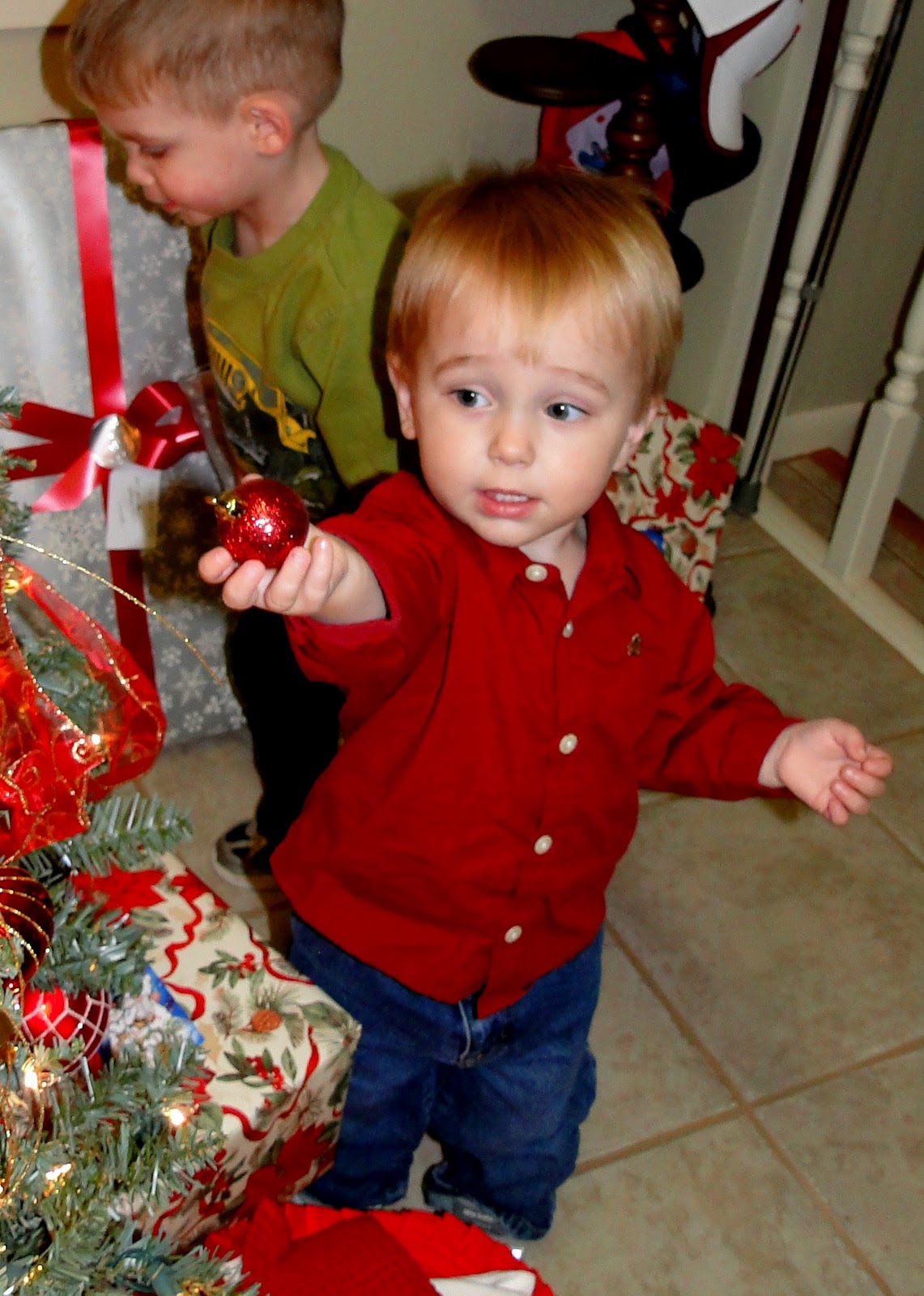 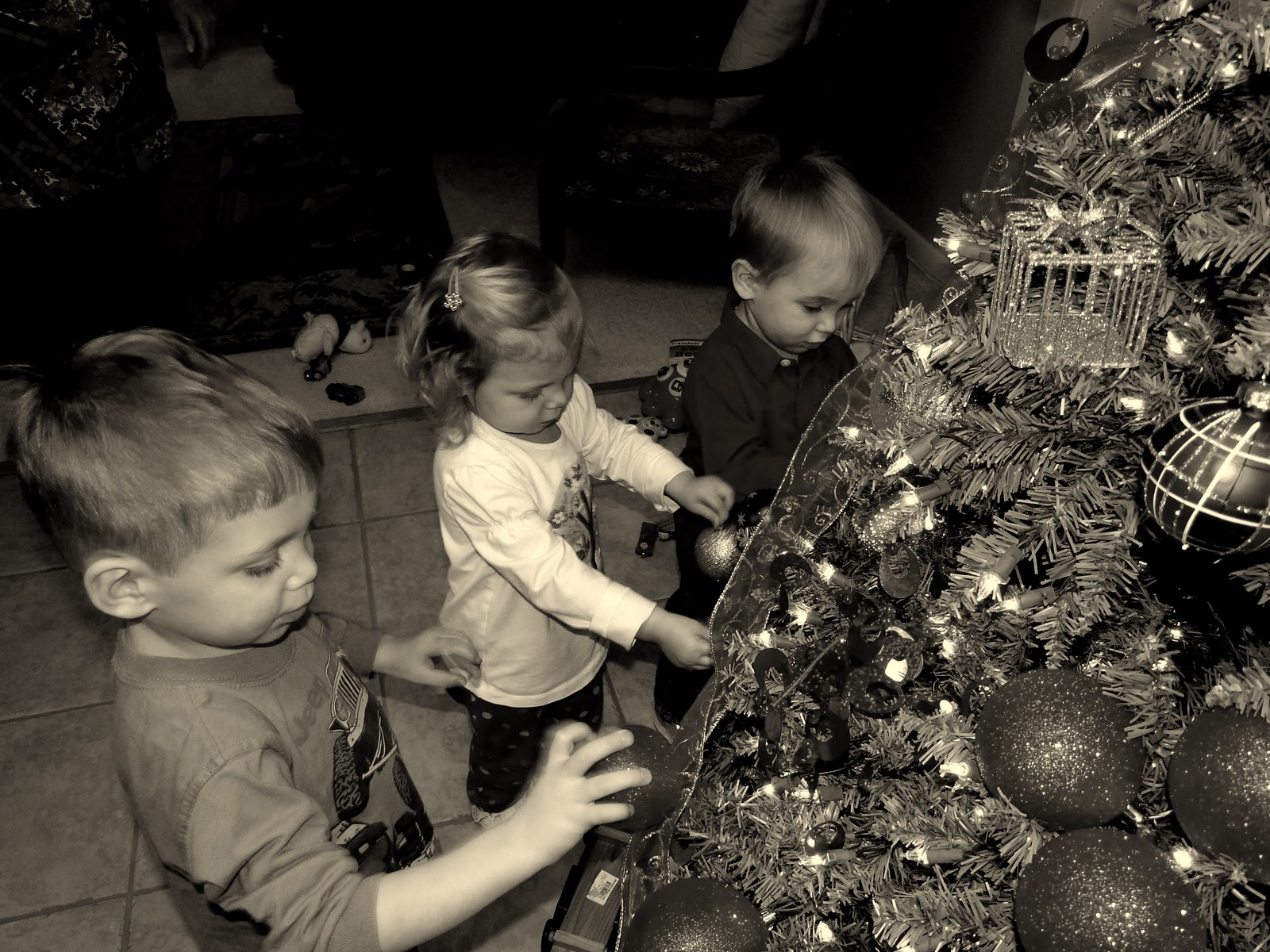 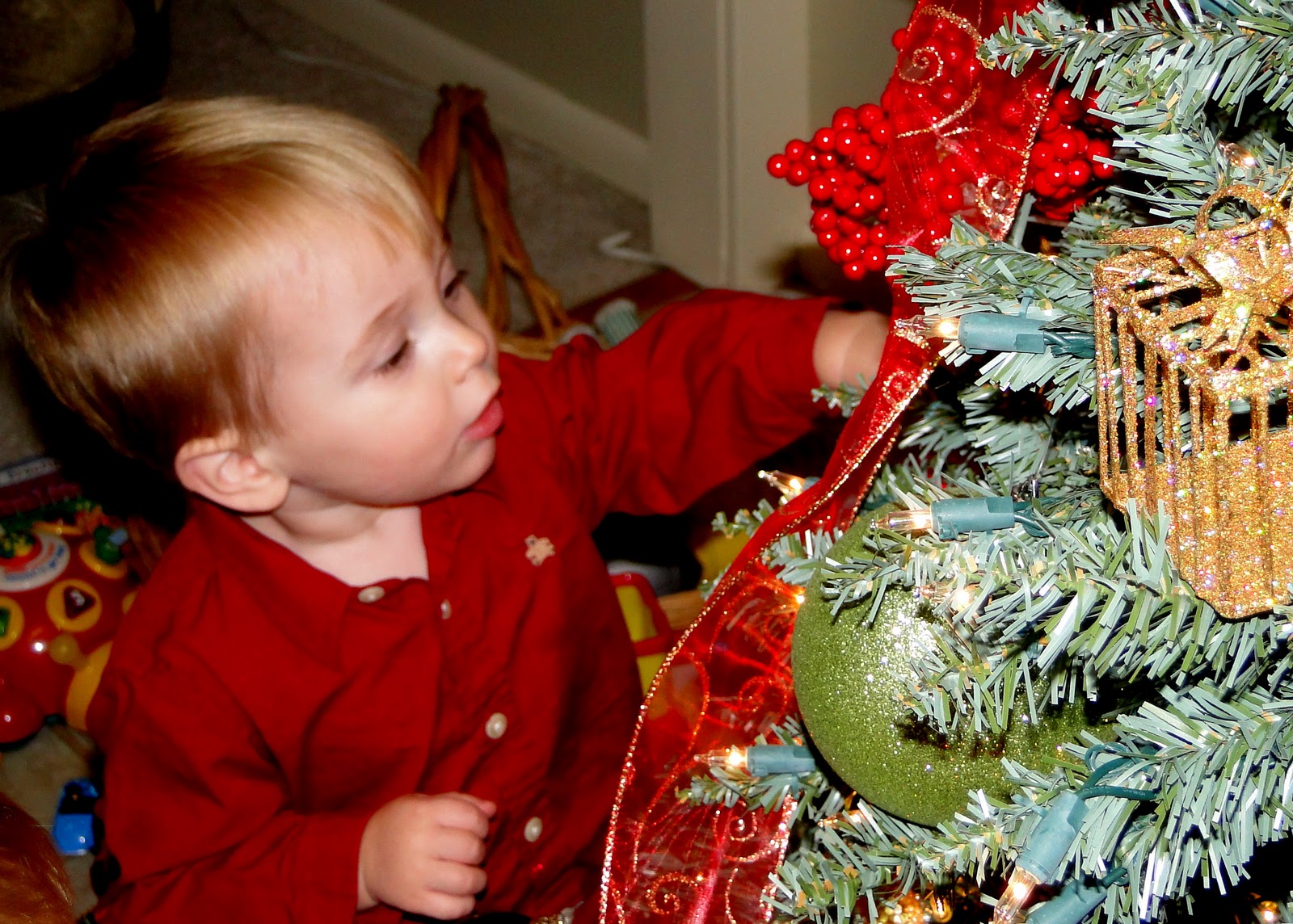 We headed over to Mrs. Charlotte’s and Mr. Rusty’s for naps then once they got up it was more playtime! The guys went outside to let the boys ride on the tractor while us women did something inside. I think we helped Mrs. Charlotte finish up wrapping presents. Well, Mom and Casey did. I think I mostly just sat on the couch all zoned out and medicated! 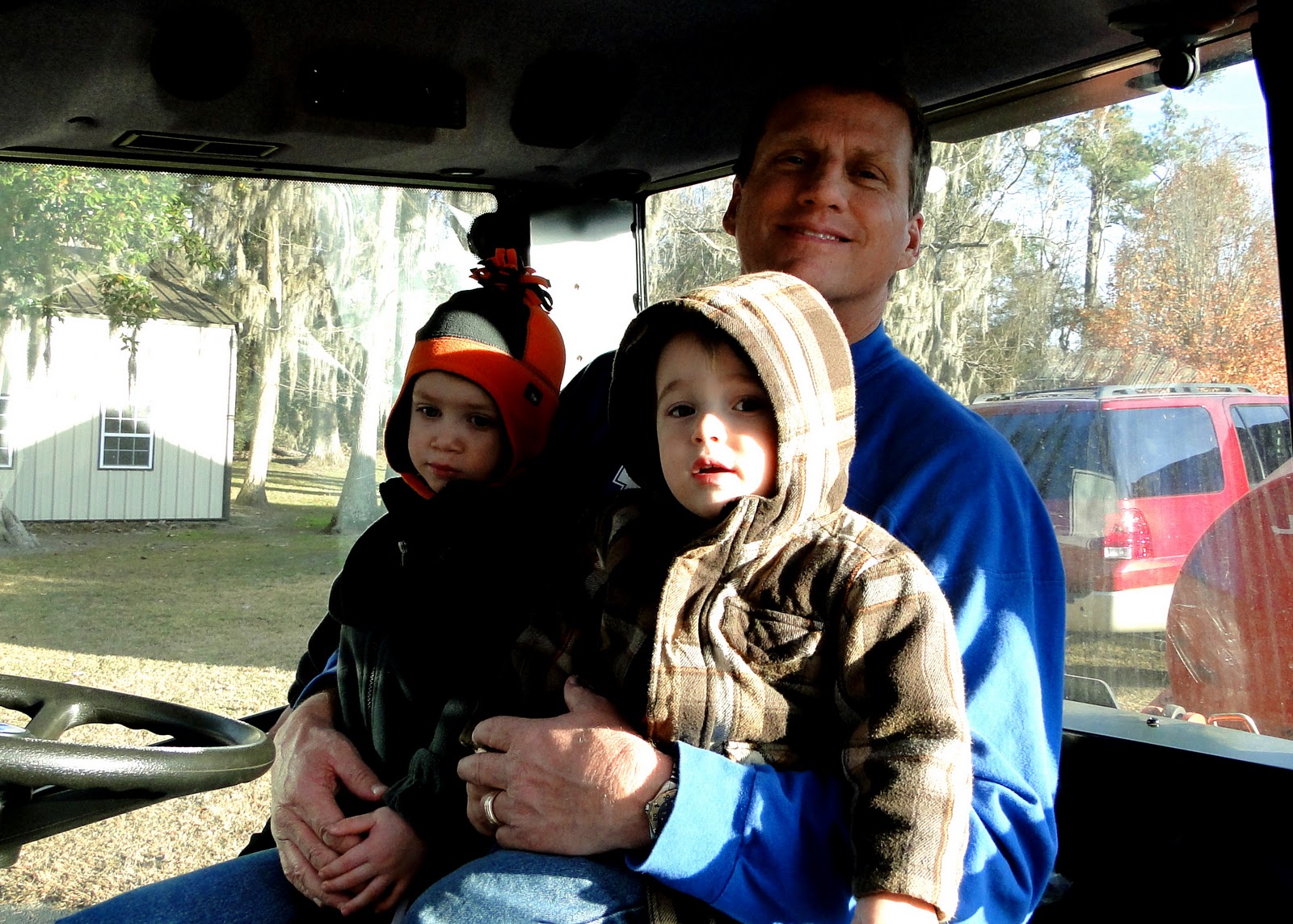 it’s tough to get a smile out of Colt for a picture, isn’t this cute? 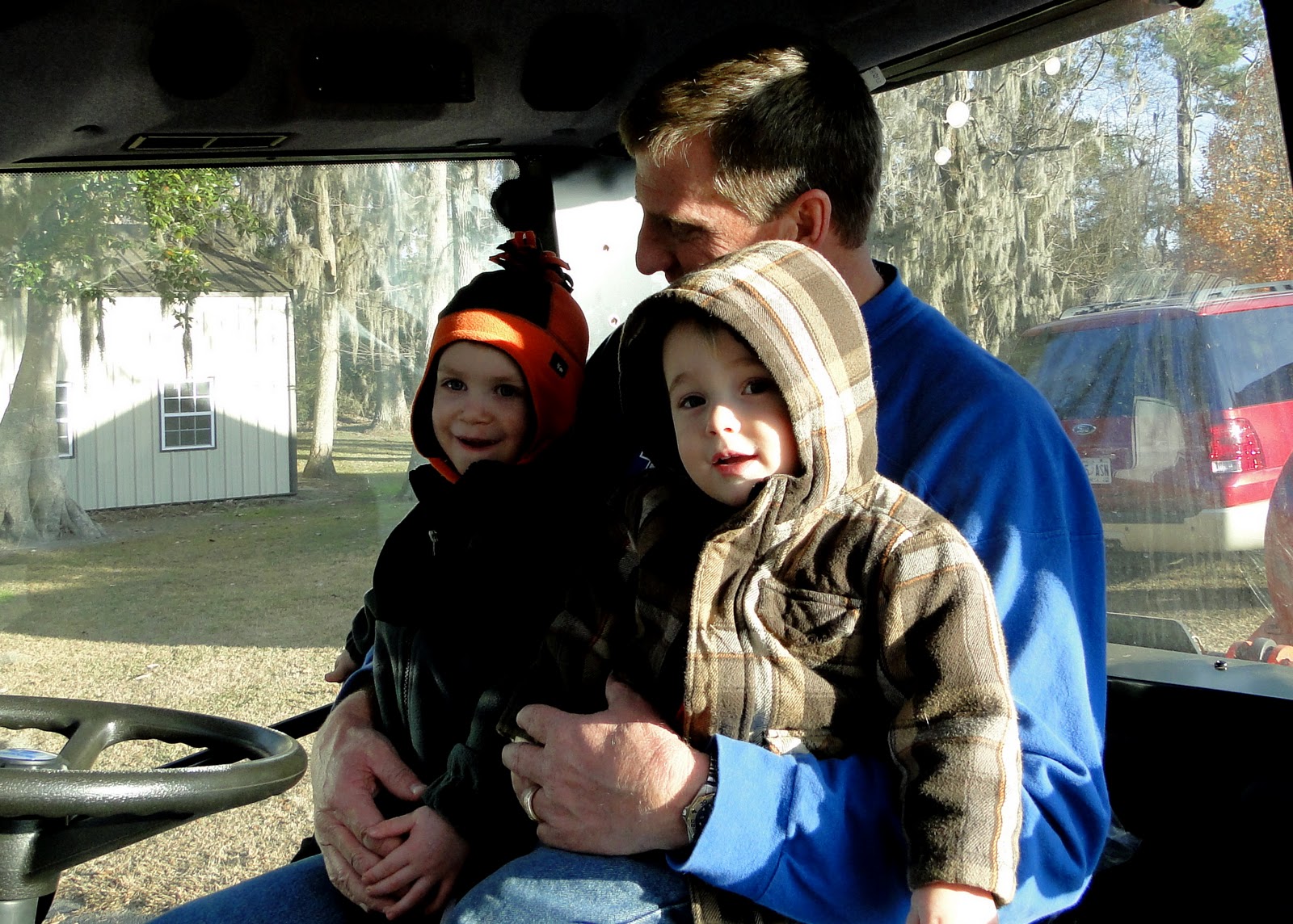 This year we decided that since the gingerbread houses weren’t happening that we’d all watch a Christmas movie together. Mr. Rusty thought he had recorded one of those classic Christmas movies on tv but we realized it was a remake with a new twist. I can’t even tell you what it was called…I was thankful for the movie time though as I curled up on the couch and just slept. I think everyone else enjoyed it though? 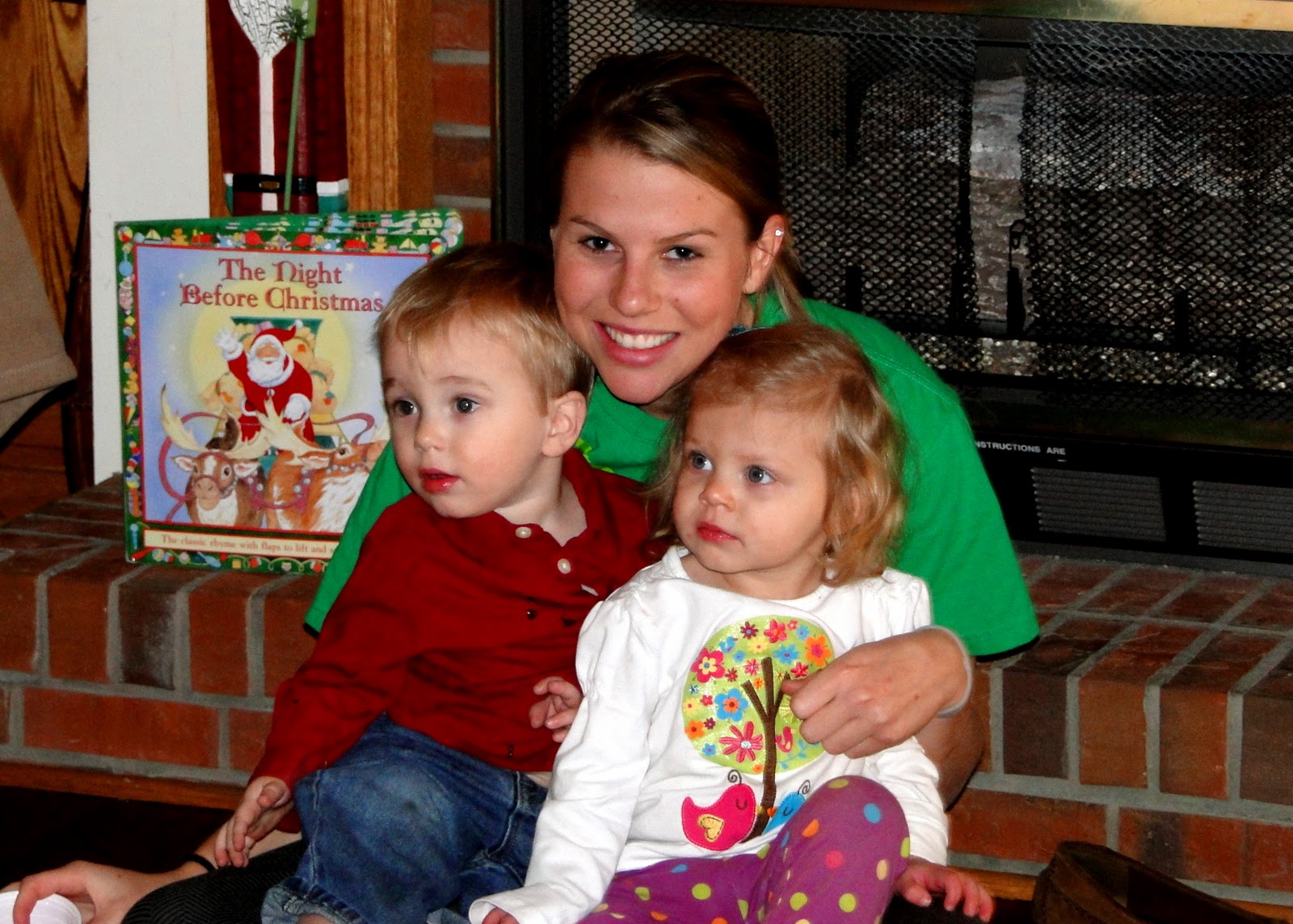 One part of the day I do remember was bath time! Mom, Mrs. Charlotte and Courtney cleaned up from dinner (which I have no clue what we even ate!) and Casey and I took the kids to get a bath. It was ADORABLE having all three of them in the tub together. All day it was pretty fun to see them interact. Here’s a video of them being silly, crazy toddlers!

can’t you tell they LOVED it??? 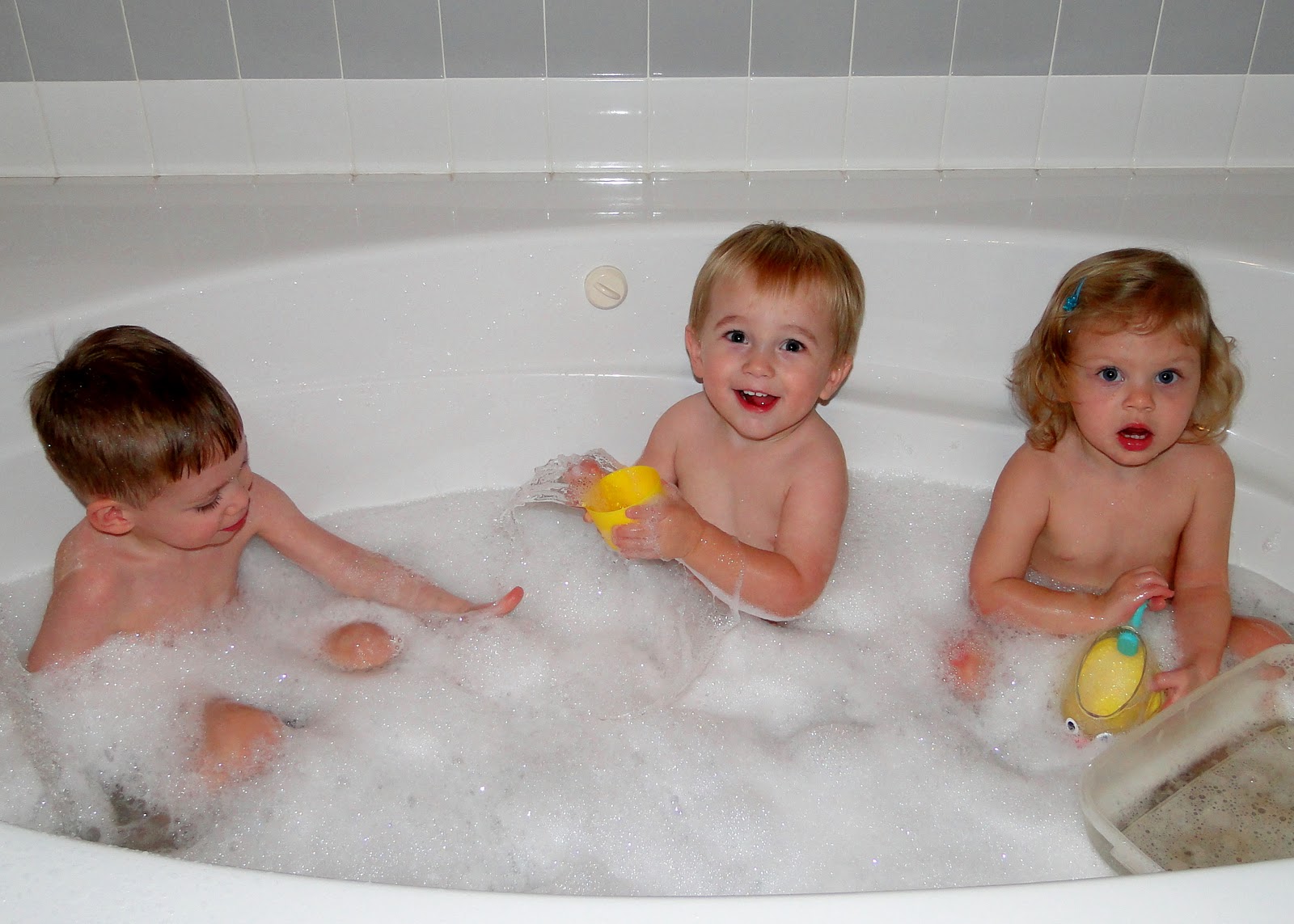 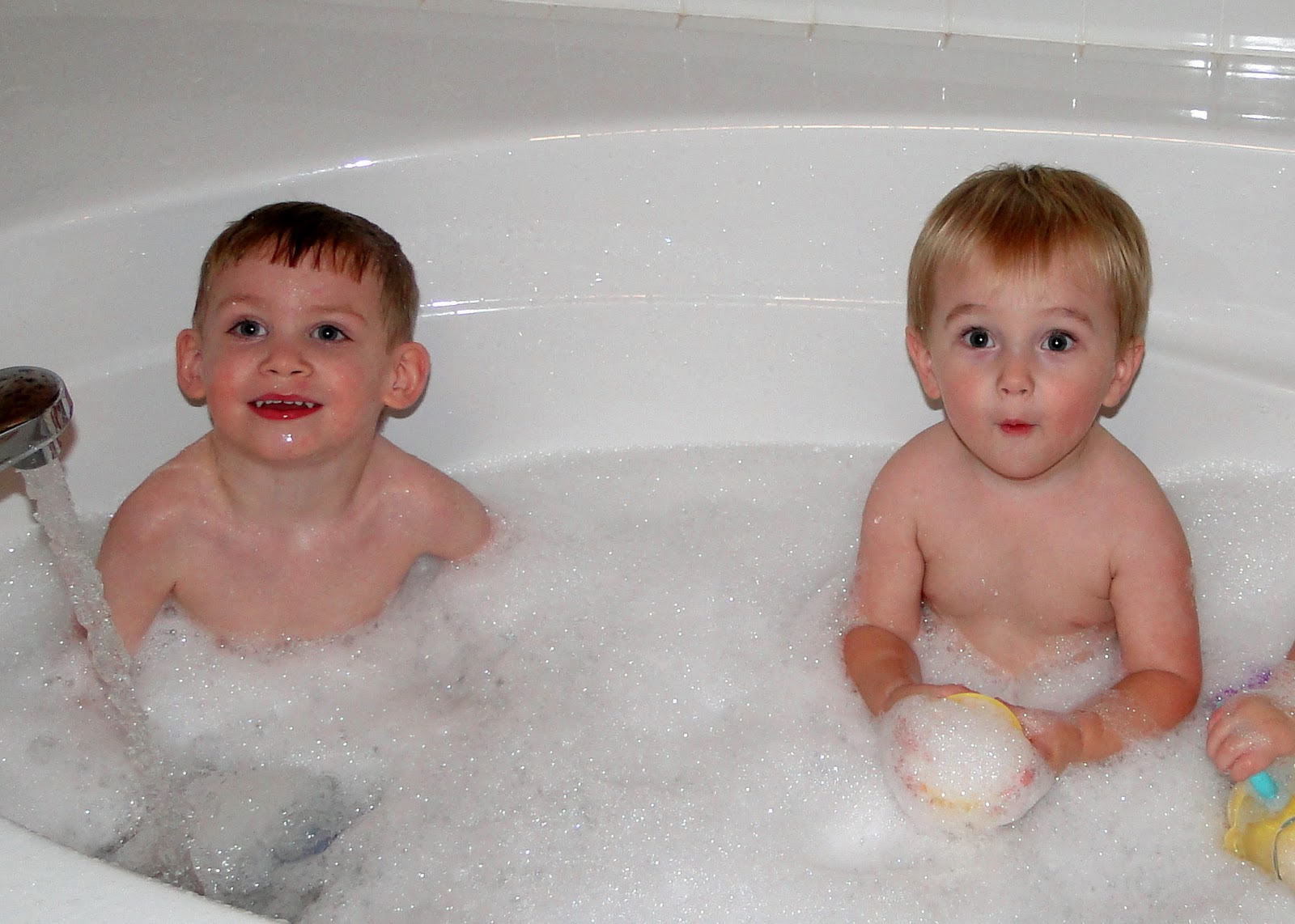 this one so belongs in a frame somewhere 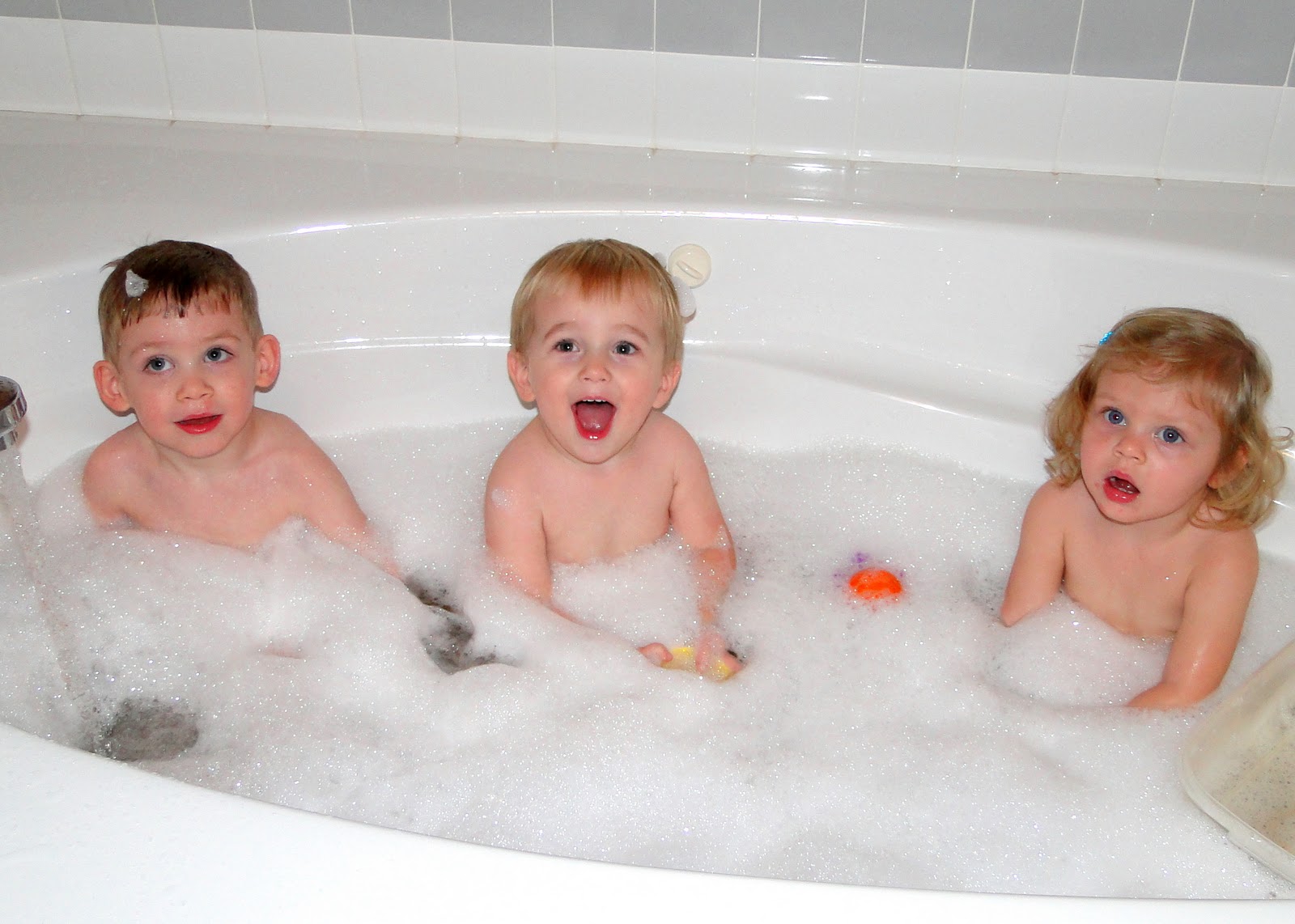 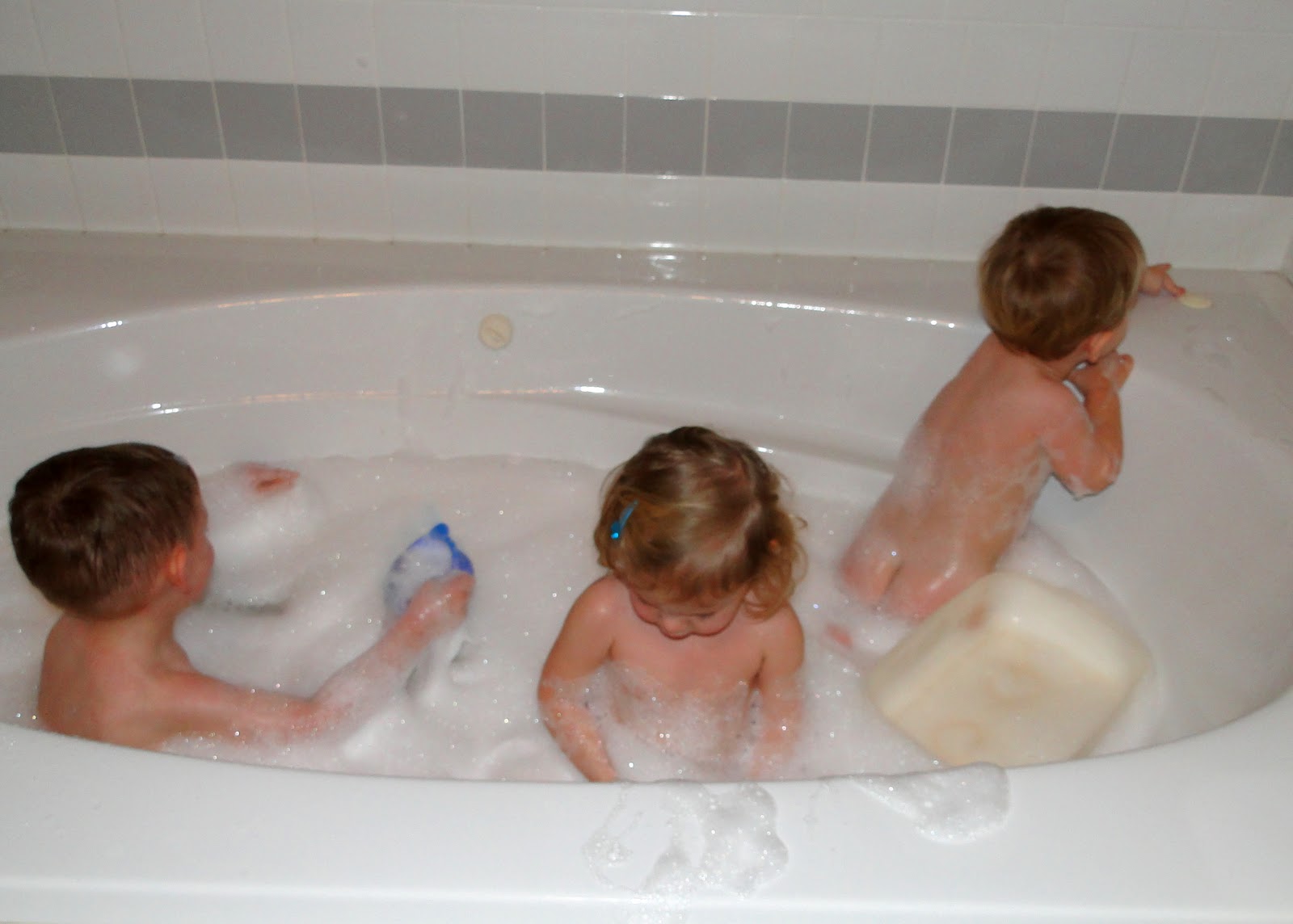 the jets made the bubbles turn into some serious foam 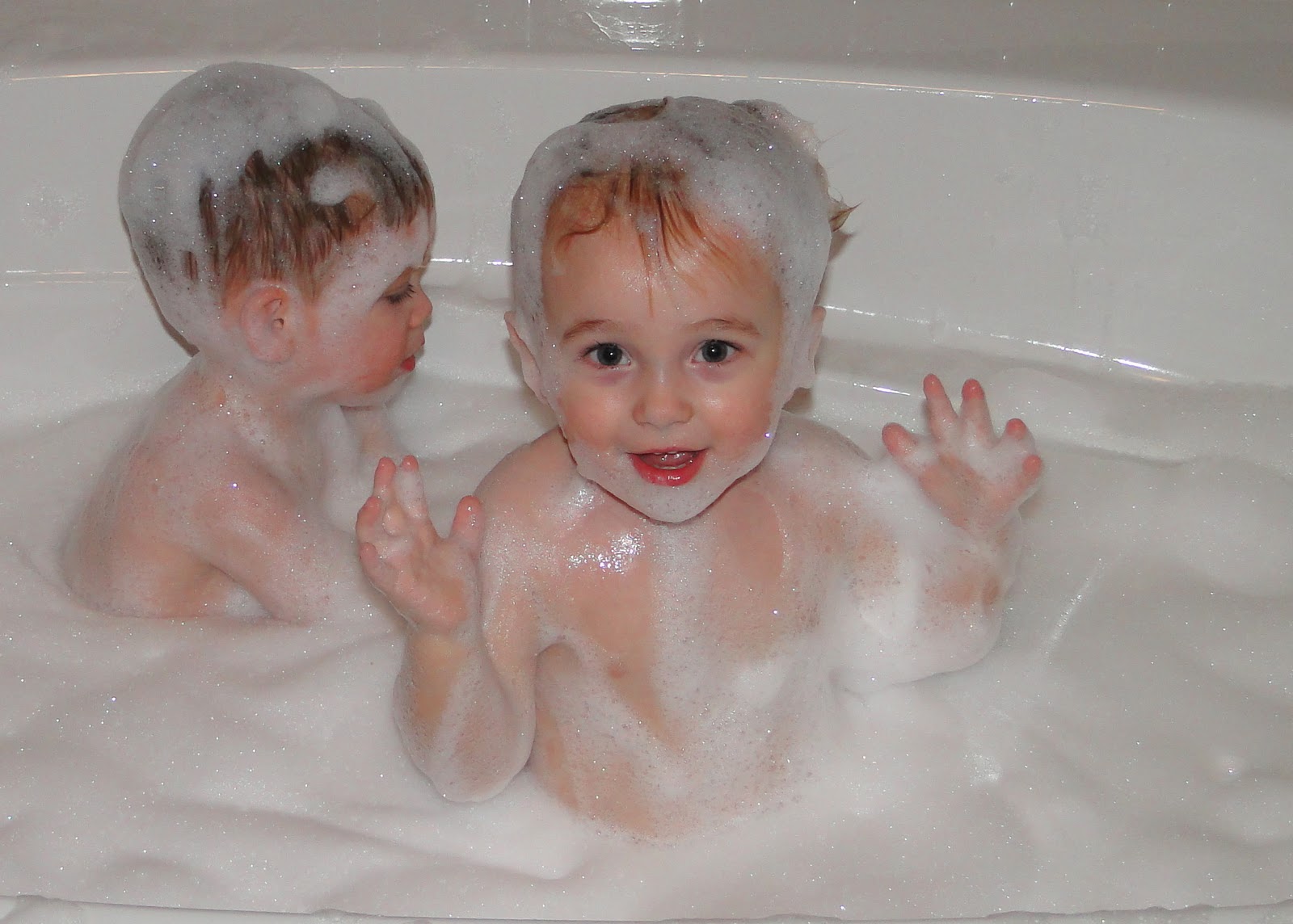 I know he’s my son but I’m sorry this makes me laugh out loud every time I see it! (it would so make a good “Wordless Wednesday” picture wouldn’t it???) 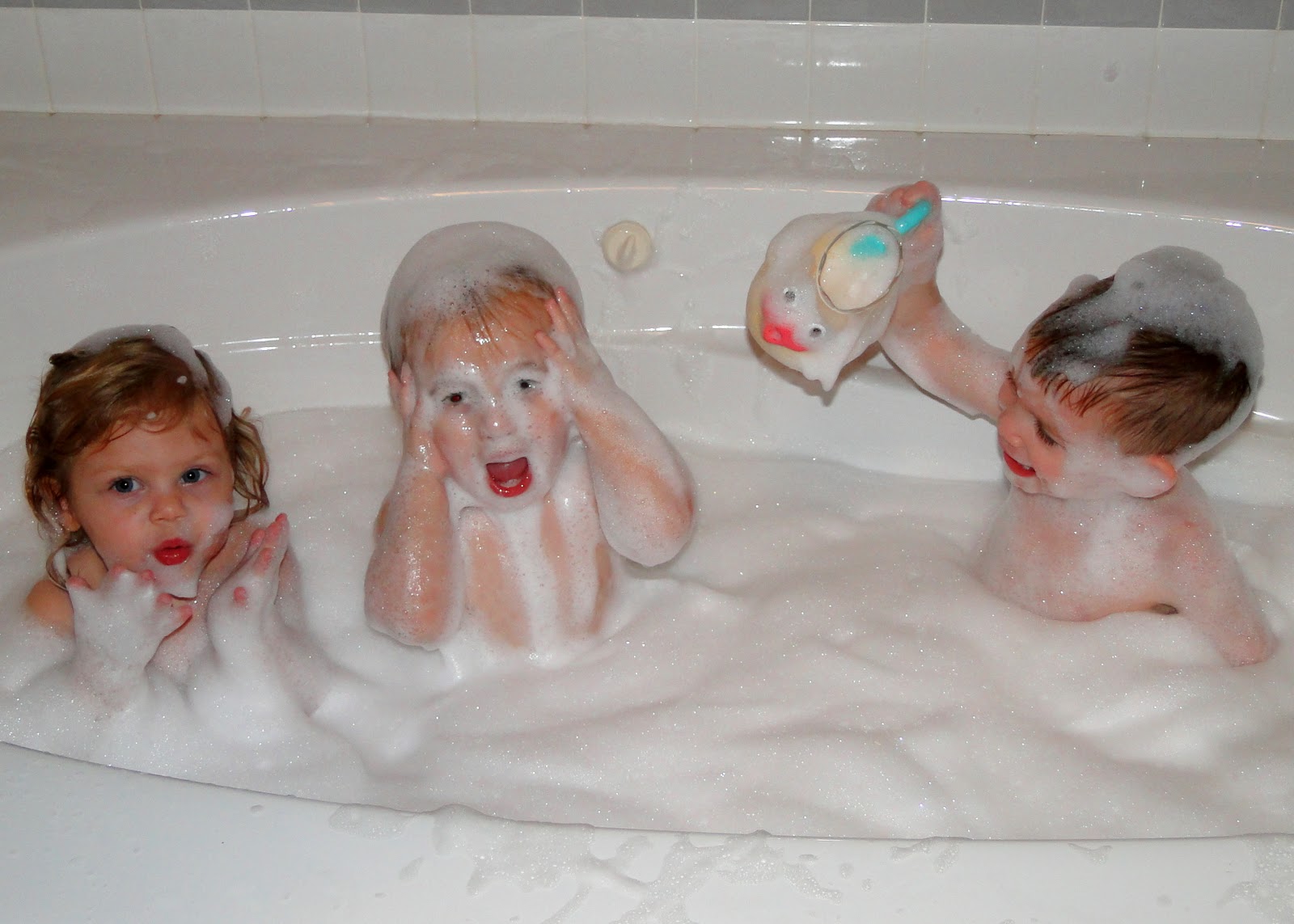 it got a little out of hand 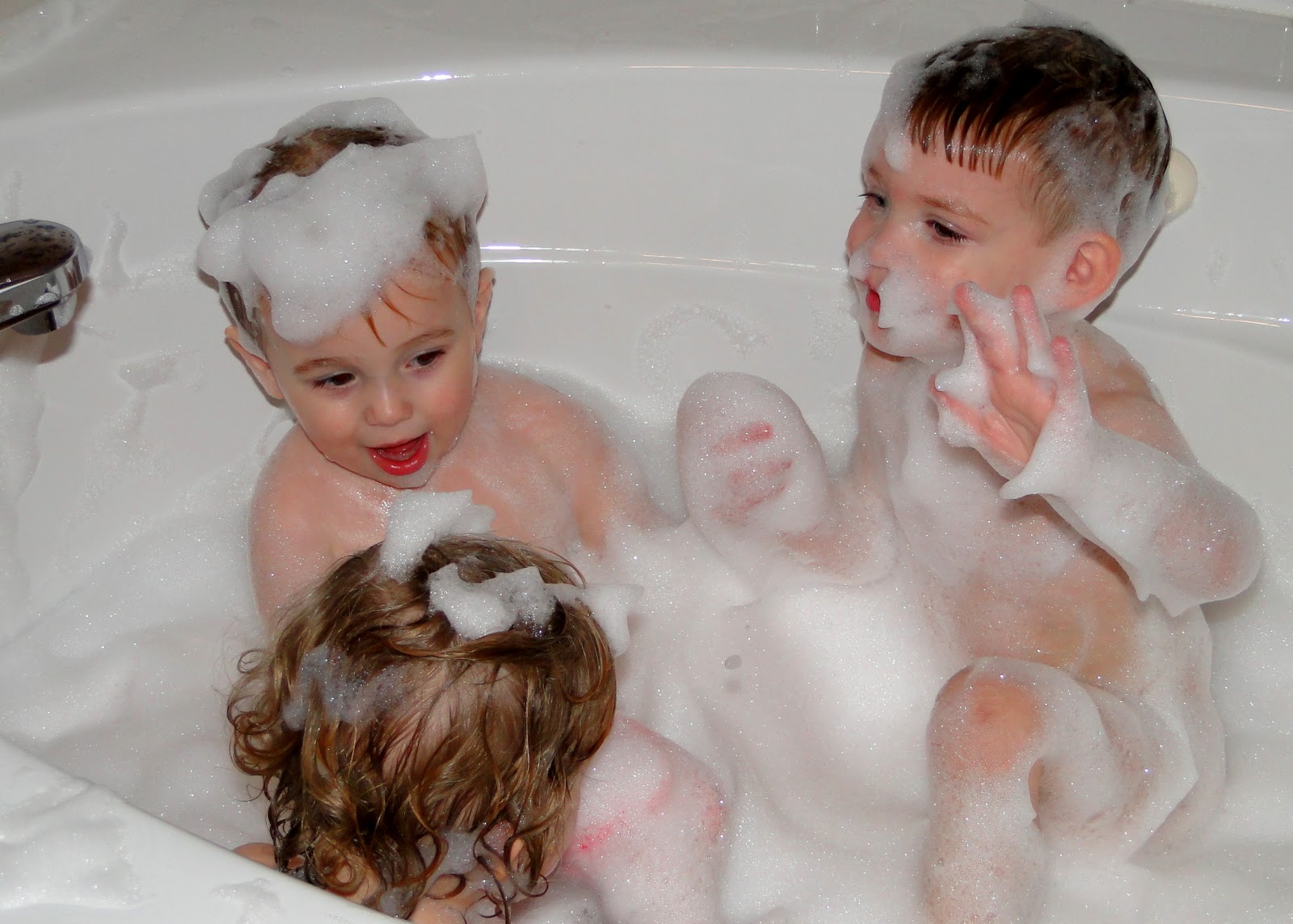 Once Payton and Colt ganged up on Kye and started attacking him with bubbles we decided it was time for them to get out. haha! It wasn’t as easy as you’d think though. We drained the tub and all the water was gone but the bubbles stayed. We tried to rinse them in the tub but that didn’t work so we ended up throwing each of them into the shower for a rinse. Colt was hilarious because he got in the shower, peed, and cracked up. Kye and Payton hated it but it simply had to be done. You can’t have kids living their whole lives with bubbles all over them can you? 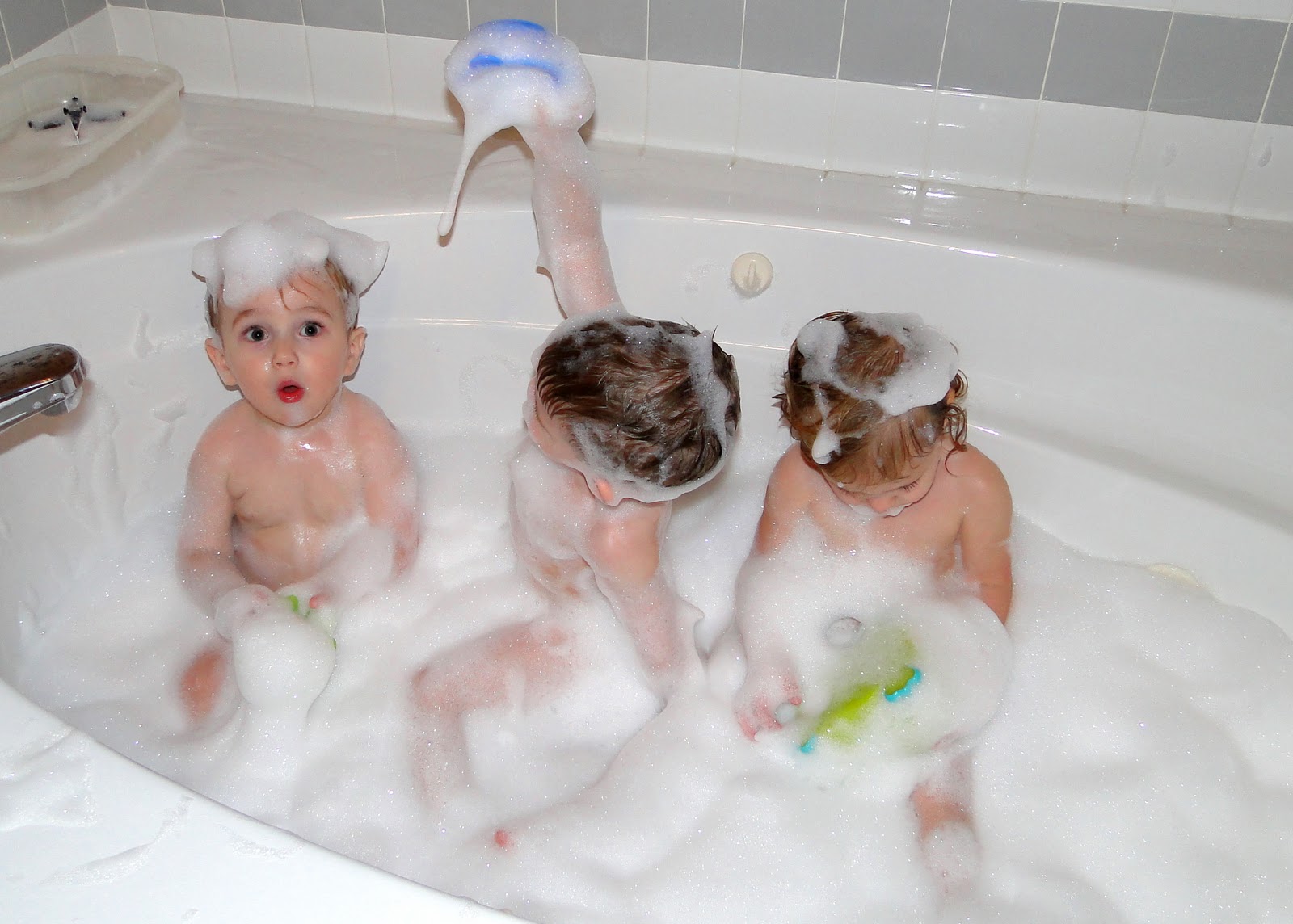 After we battled the bubbles it was bedtime so Mrs. Charlotte wanted all of us to gather in the living room to read The Night Before Christmas. Kye was lucky to have three fourths of his grandparents there 🙂 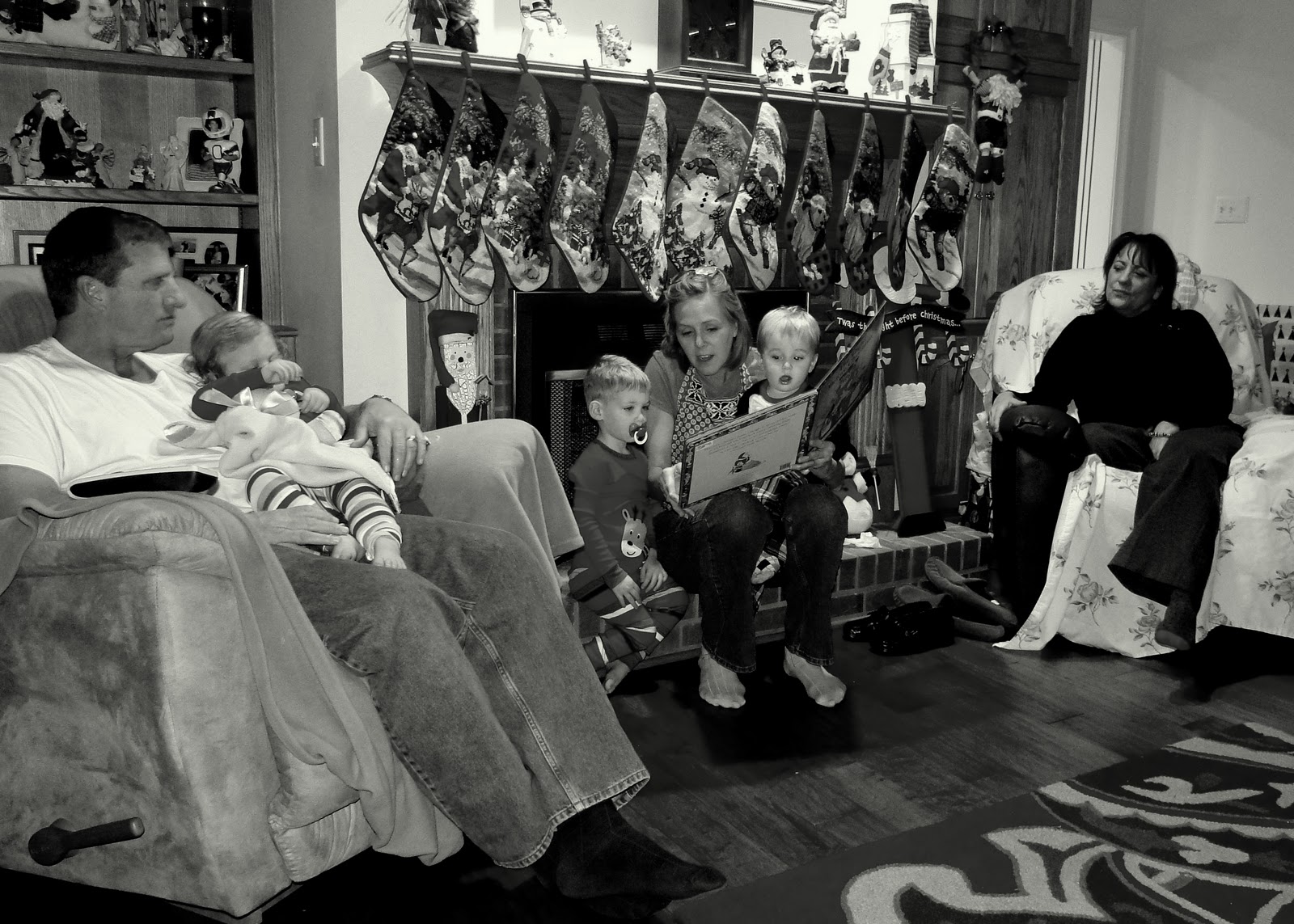 While she was reading we could hear Santa’s sleigh bells!!! Kye did not like it one bit. He was so scared and I’m sure if Santa realized it he would have made his bells stop but he didn’t know and poor Kye listened to the story while peeking out through his fingers. I hope next year Santa’s bells aren’t so loud! 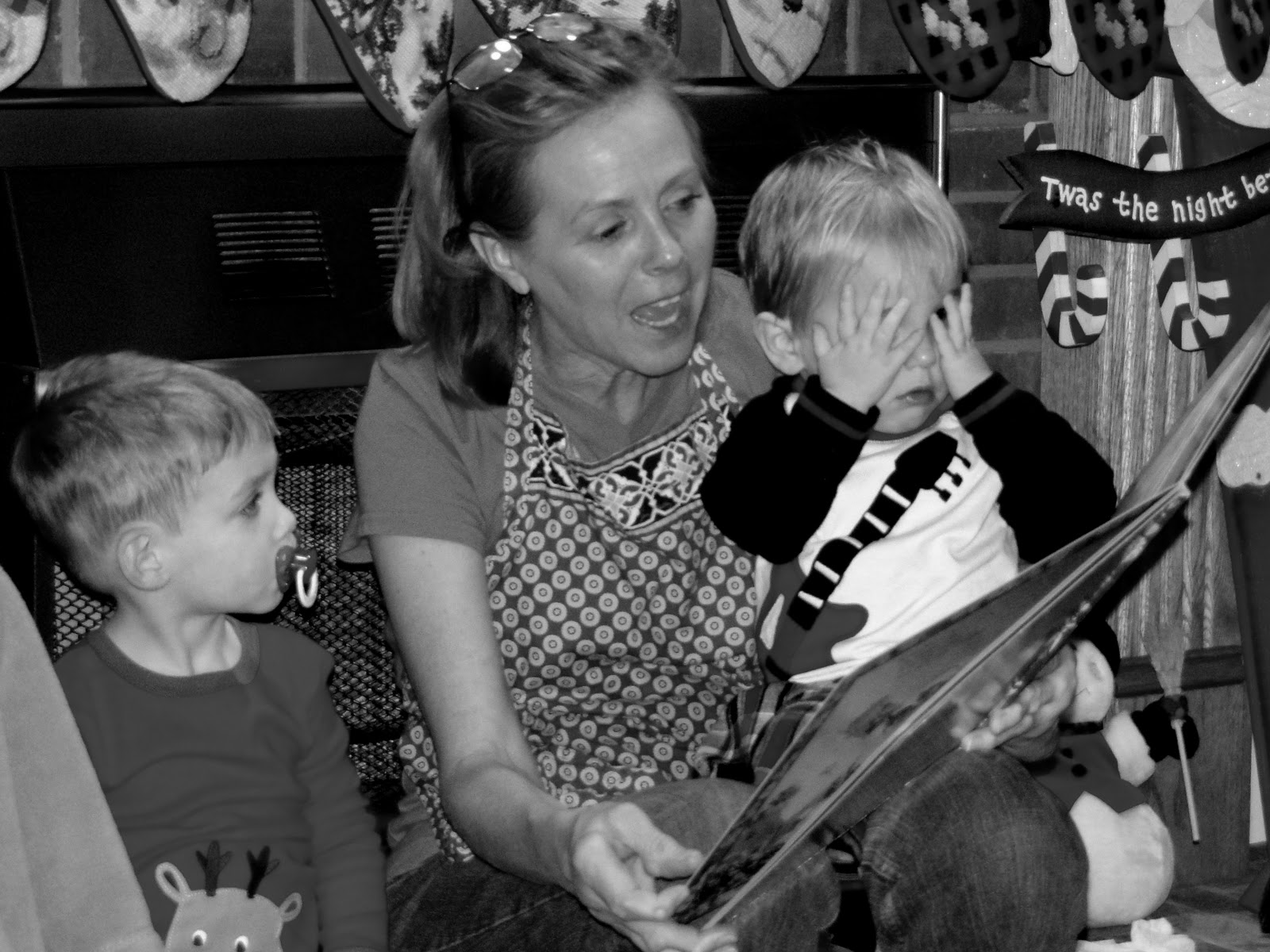 again, he’s my son but it’s kinda cute too isn’t it? 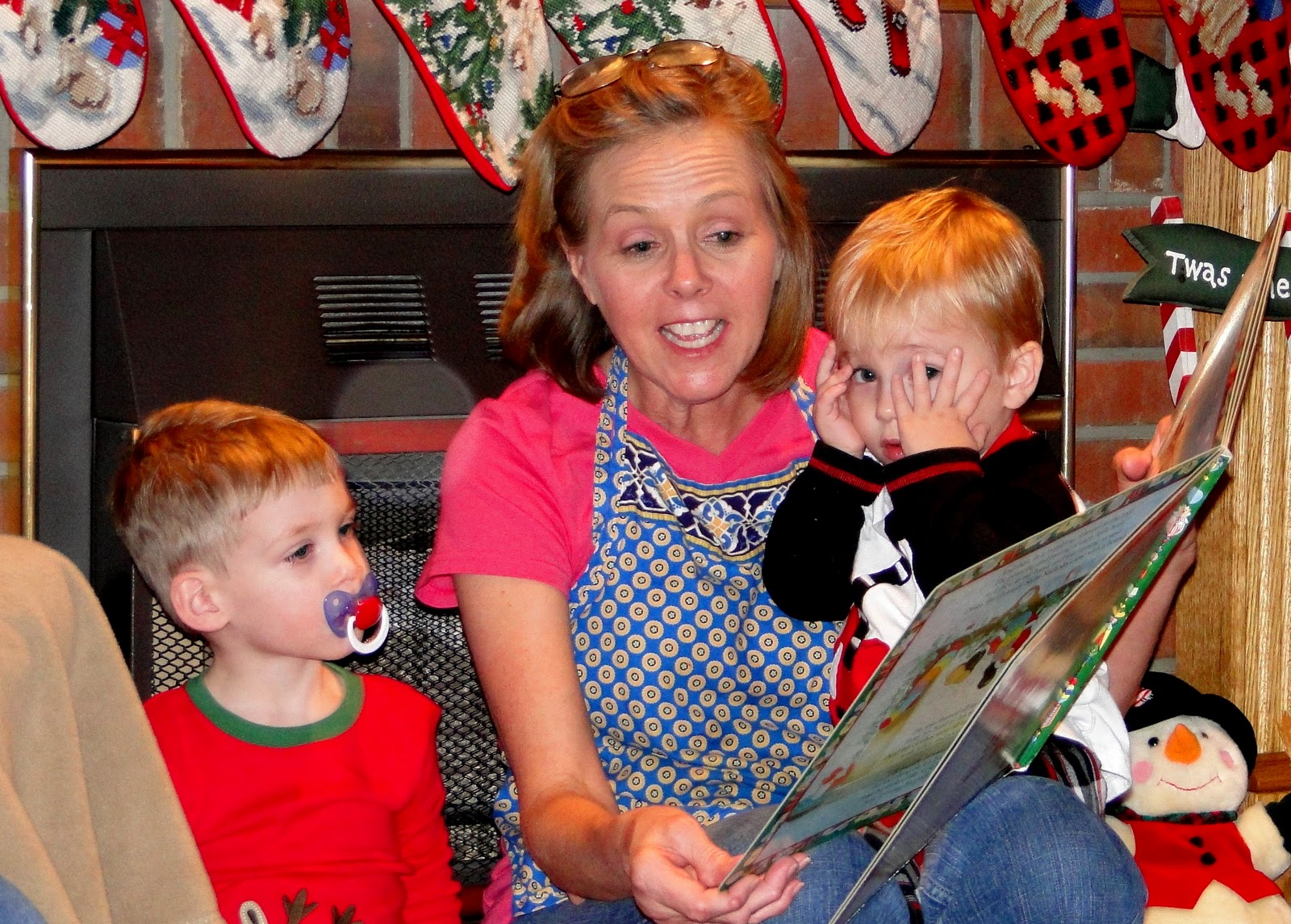 This year we were ALL able to go to bed early and we needed it. Zach had just had surgery, Courtney had surgery a little over a week before his, I was sick, and Mrs. Charlotte was wearing herself out as always. It was nice to be DONE around 9 and be able to curl up in bed to be rested for the next mornings fun!

that’s a LOT of stockings! 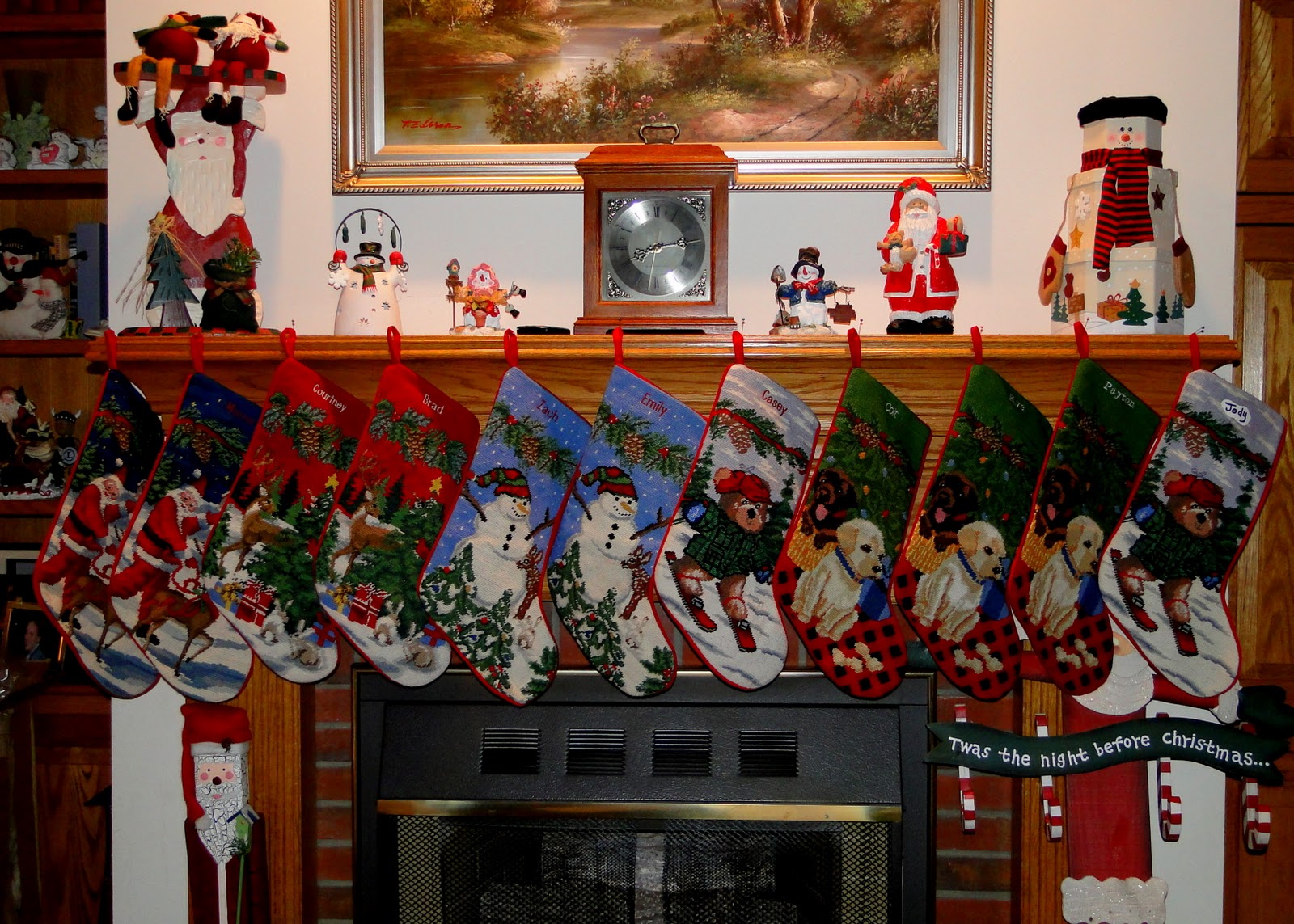