When Kye was 7 weeks old we left him to go on Zach’s first President’s Club trip, to Paris! It was VERY tough to leave him. He was so young and I was a new mom. The trip was amazing, but I was out of it! I wasn’t physically or emotionally ready yet for something like that so soon after giving birth. I’m still glad we went…but I’m SUPER thankful that we didn’t have to leave Brittlynn that soon. We put a lot of thought into when we should get pregnant with her and we decided I’d rather be HUGE pregnant in Hawaii than have to deal with pumping like crazy for such a young baby again. We for sure made the right call on that one!

Our first time leaving Brittlynn (even just for a night!!!) was this year’s President’s Club trip to Toronto, Canada. Even though she was almost 5 months old, I still wasn’t crazy about the idea of leaving her. Mom watched both kids and while I have a great system down, it’s still a lot of work so I felt guilty about putting that on her. I do have to say though that I am proud of how I wrote out everything…when we left Kye for Paris I had 33 typed pages printed out with details for Mom…this trip? I had 16 total typed pages and that’s for BOTH kids! I also wasn’t really looking forward to pumping all the time. I know it may seem silly, but as a nursing mother I WANT to NURSE my CHILD. Pumping just isn’t the same and traveling while pumping is pretty stressful. No offense to Canada, but I’ve also never really had any desire to go there. It’s a HUGE honor that Zach was in the Top 85 in the company again (his 3rd time in 4 years with the company…and he was in the top 40 this year!!!) and I’m SO appreciative of Aflac for sending us on the amazing trips, but Canada?!? It just didn’t really appeal to me. I’ve been to Quebec before (Dad drove us over the border from Maine for a couple of days) and I enjoyed it, but it’s just not somewhere I want to go, ya know?

On top of my apprehensions, we also had the 5:45 AM flight out of Valdosta the day we left (April 27th). Ugh. I can’t stand that flight. Having to get up so early. Plus it meant we had to take the dogs to the kennel a day early (costing us more money) and we had to take the kids to Mom’s the night before, costing us time we could have been with them. We left our house at 4 AM and on the way Zach’s phone rang. It was in the trunk with the luggage so I assumed it was his parents calling. Mr. Rusty qualified for the trip as a District Manager which is a SUPER big honor so they were going too! I called Mrs. Charlotte’s phone and she said Delta had called. Our flight was delayed. Awesome.

We met them at Waffle House for an earrrrrly morning breakfast 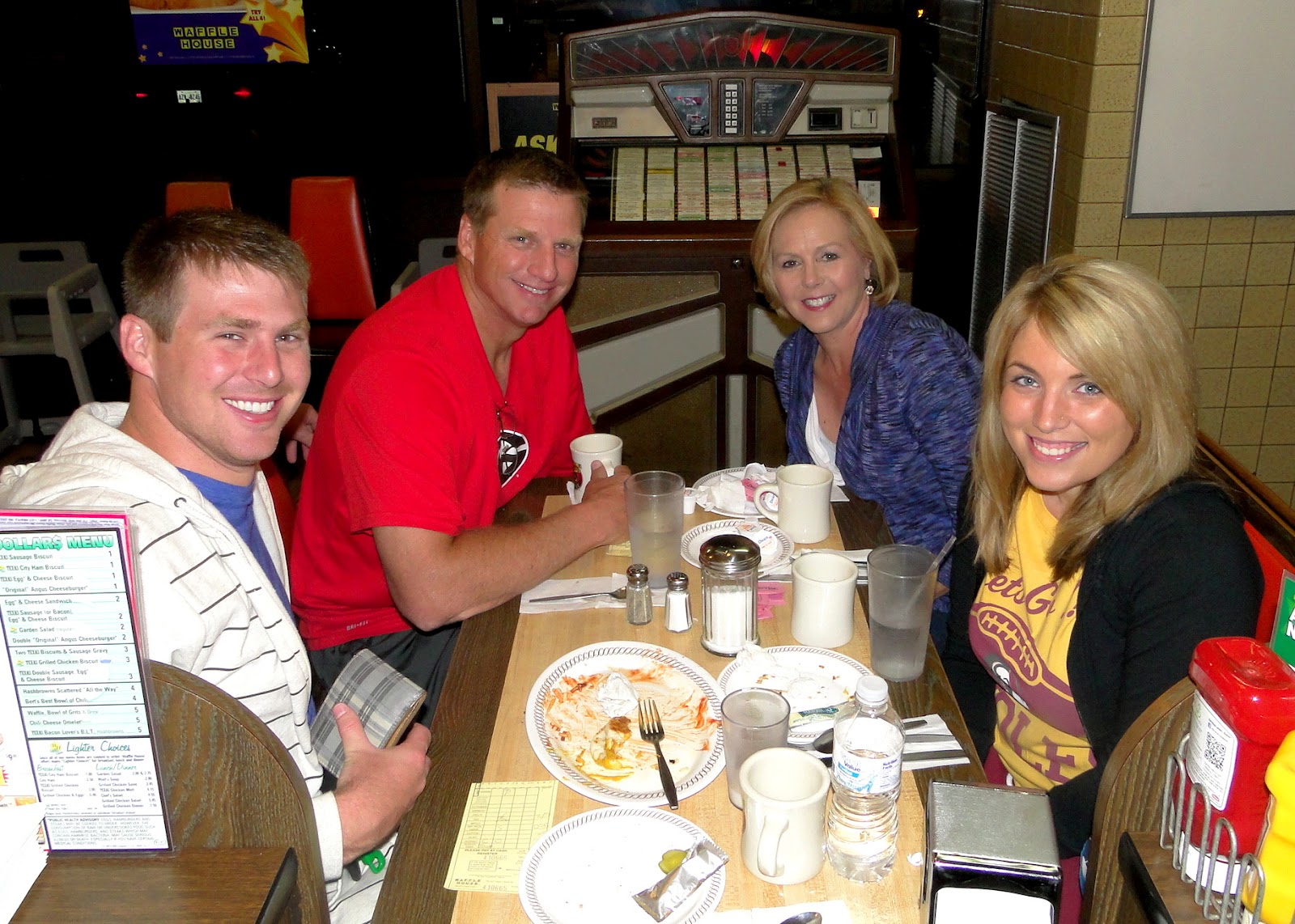 It was a VERY frustrating situation. The flight continued to be delayed again, and again, and again. Finally they said it was “delayed indefinitely”  which I don’t even fully understand how that is possible. They re-worked our flights and we ended up driving to Atlanta to get our new connection. We were originally supposed to LAND in Toronto at 9:30 AM. Guess what time we got there?!?! 6:00 PM. Ugh. Horrible way to start a trip!!! ESPECIALLY when alllll I wanted to do on this trip was CHILL. And the first day was going to be straight up relaxing since we would be getting in so early. It also meant we missed the Aflac lunch and most of the dinner.

I called Delta and pitched a fit that day (while we were at the Valdosta air port) and they gave us each a $100 voucher. When we got home we found out the flight had actually been canceled so I called again and ALL they would do was give us another $100 voucher. Ridiculous!!!

Mr. Rusty kept saying we were bad luck…because this is NOT the first time we’ve had something happen. On our honeymoon we missed our flight (we didn’t know you had to check luggage for international flights earlier than domestic ones). For an Aflac trip to NYC we were delayed for HOURS leaving Valdosta. For another Aflac trip to Bermuda we were stuck in Bermuda for HOURS and ended up having to rent a car in Atlanta to get home. And let’s not forget Zach almost getting arrested and us getting escorted off the plane in Mexico…maybe we are bad travel luck!!!

I’m SO thankful Mr. Rusty and Mrs. Charlotte were going on this trip too as it was nice having people to drive to Atlanta with and wait it all out with. While we waited I showed them pictures from the blog. Mr Rusty was cracking up at the most random stuff (like the stickers I used each week to show how far along in my pregnancy I was…how is that funny?!?). I told him he should start actually reading it, he’d probably get a kick out of it (isn’t it funny that NONE of Zach’s fam reads it?!?!) OF COURSE they got lucky with first class seats on the flight…we were still in the economy section 😉

Finally on our way! 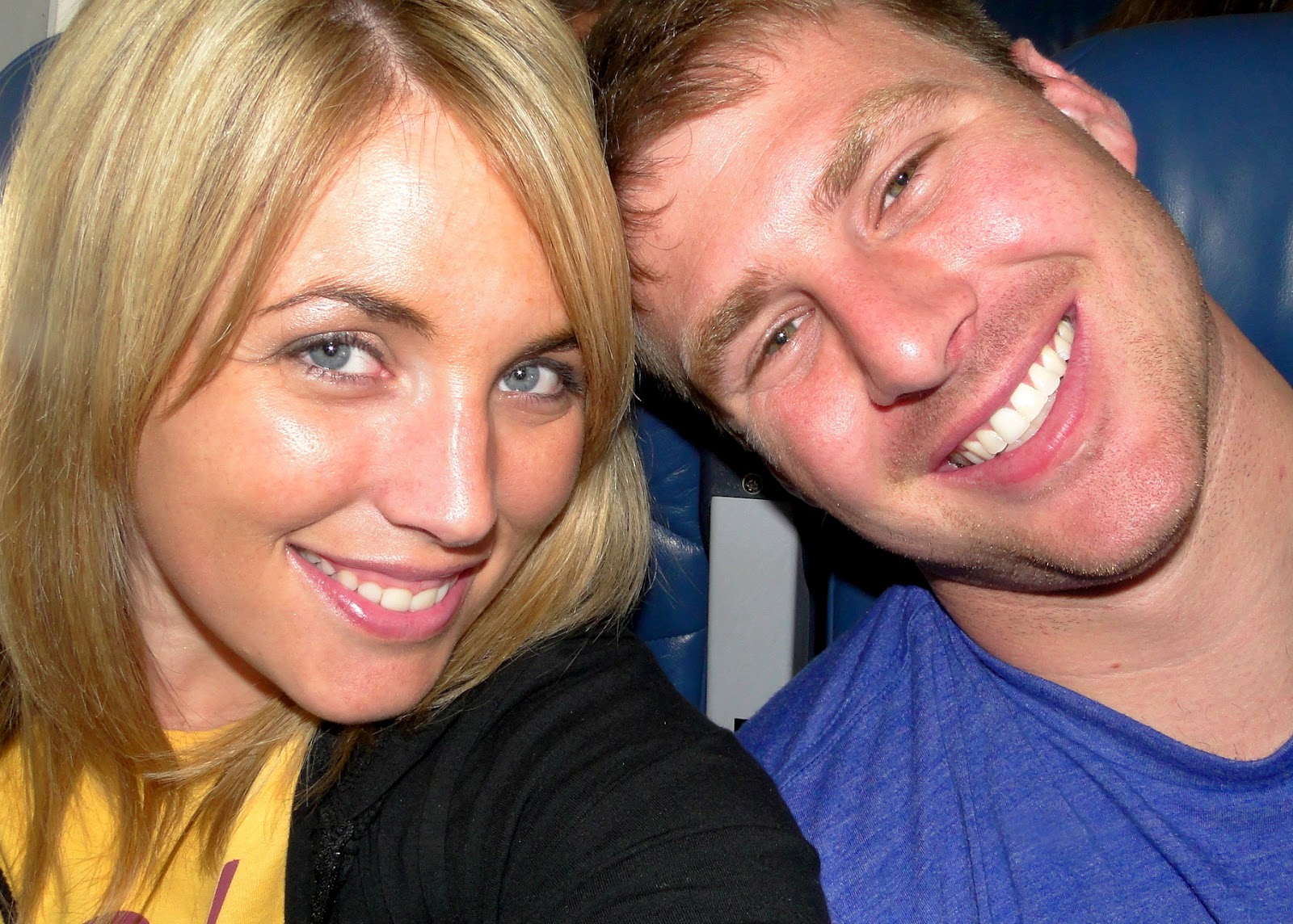 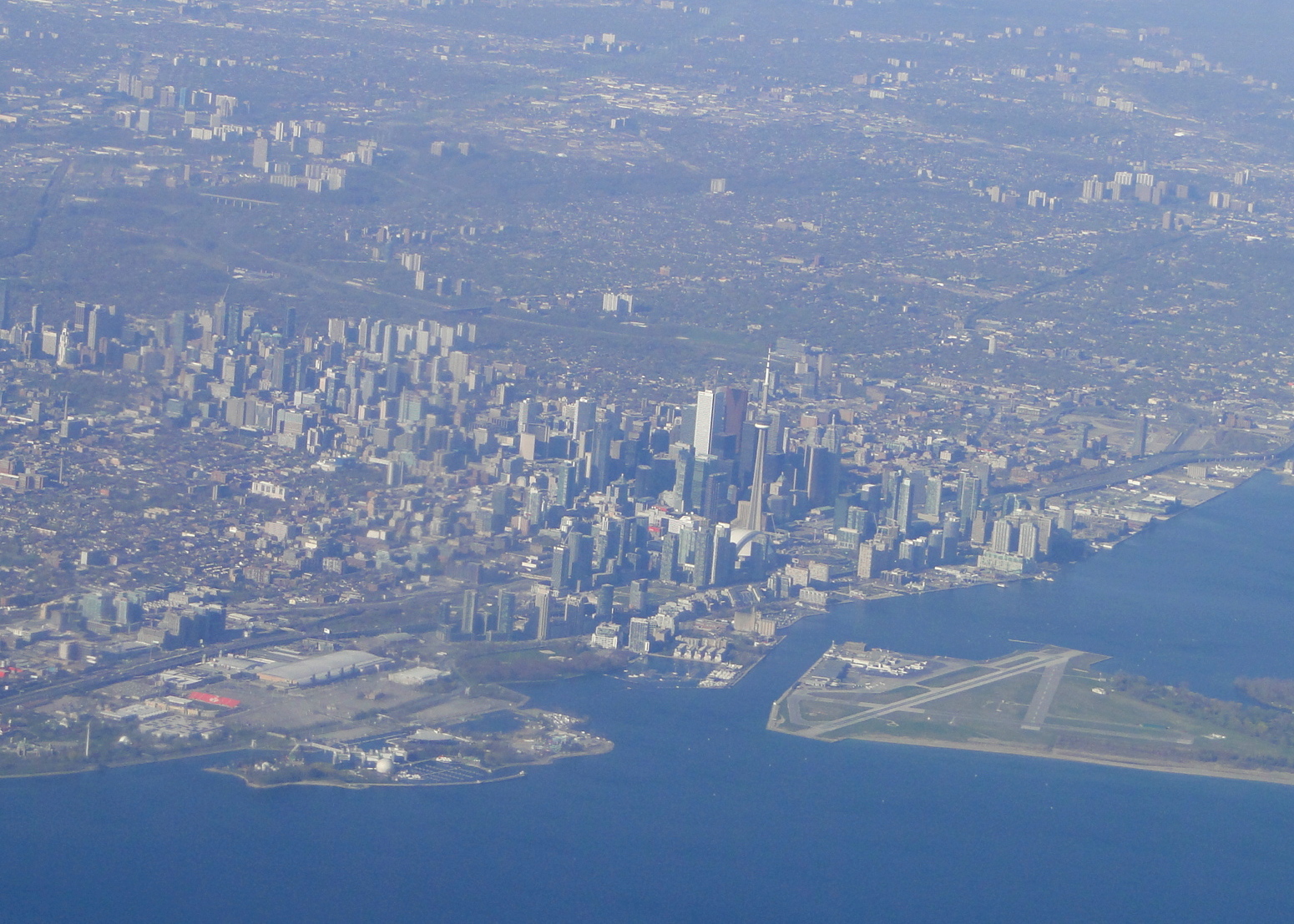 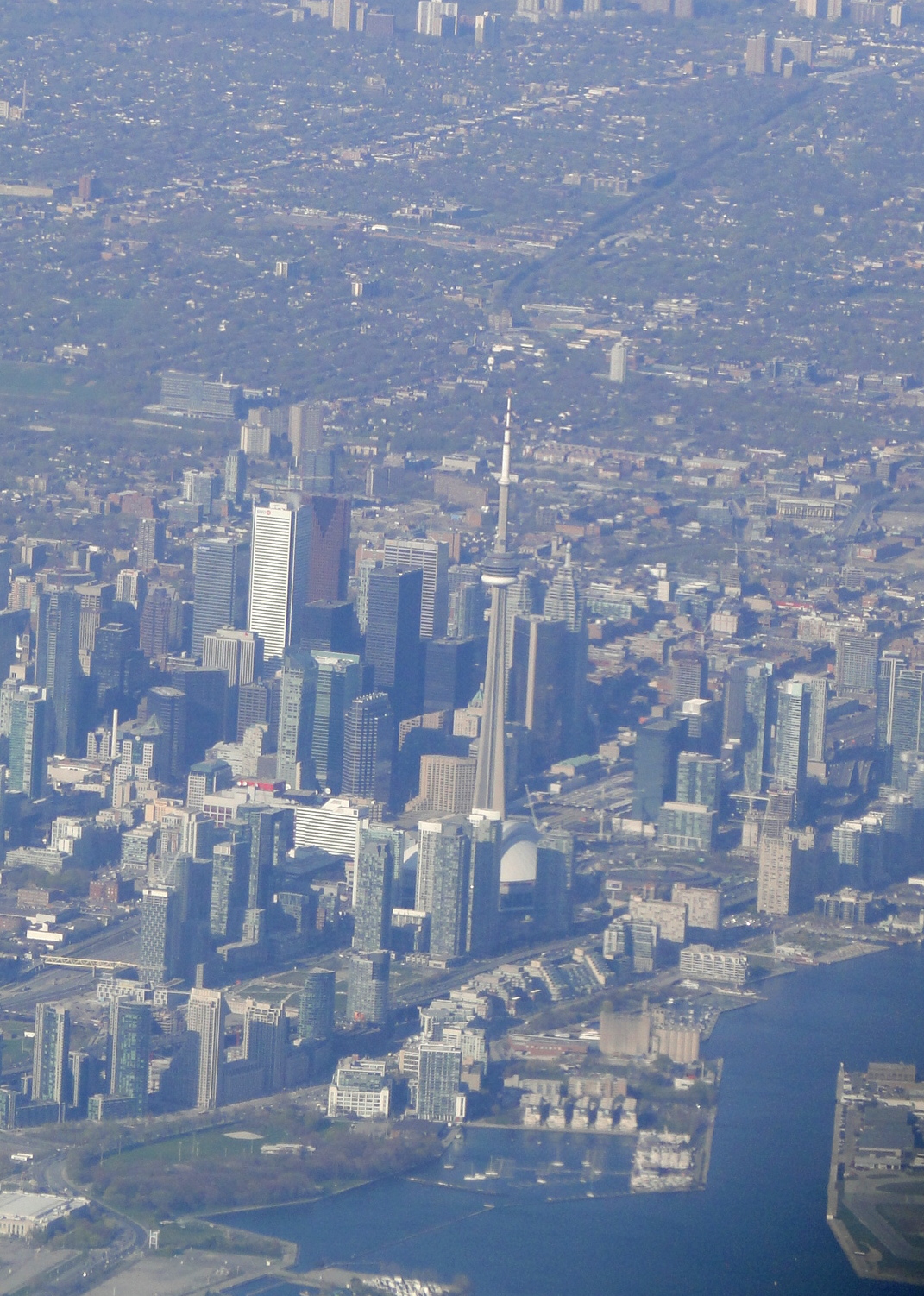 We were EXHAUSTED by the time we finally touched the ground at 6 PM. Thankfully, Toronto is the same time zone we are so our bodies were able to stay on Georgia time (and it made pumping WAY easier to handle the whole time). The Aflac Welcome Dinner started at 6 and by the time we got to our hotel from the airport it was after 7. We all decided just to stay in our travel clothes and head over. I felt uncomfortable being dressed so inappropriately for the event but free food was worth a little embarrassment 😉

When we got there we mingled with all the Aflac people, saw some of our travel friends, and even got to visit with Mr. Paul Amos and his wife, Mrs Gene. Mr. Paul founded Aflac with his brothers!!! His wife is adorable and so sweet. Back in the day they used to go on every single Aflac trip before they sent their people there just to make sure it was a worthwhile place to visit. Even though his health is declining and they are in their 80’s they still go on as many of the trips as they possibly can. They are SUCH down to earth people and I always take the opportunity to thank them for our trips. A lady we were with went over to Mr. Paul and told him about a recent Aflac claim she filed for someone. He started to literally cry just talking about the company and how it has helped so many people. We are so blessed to get to visit with such a legend!!! 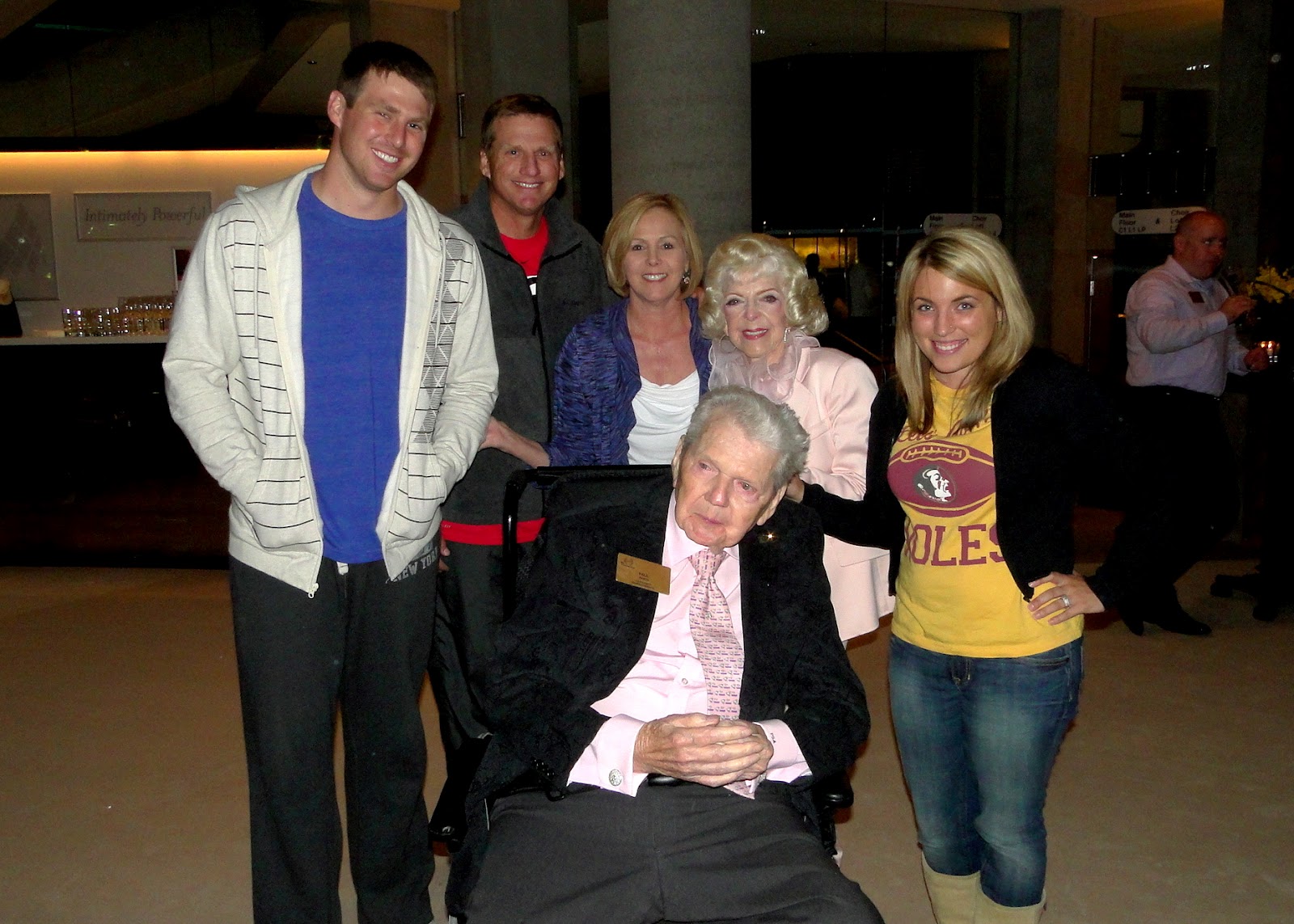 Mrs. Gene LOVES Mrs. Charlotte she will stand and talk to her forever. It’s adorable! 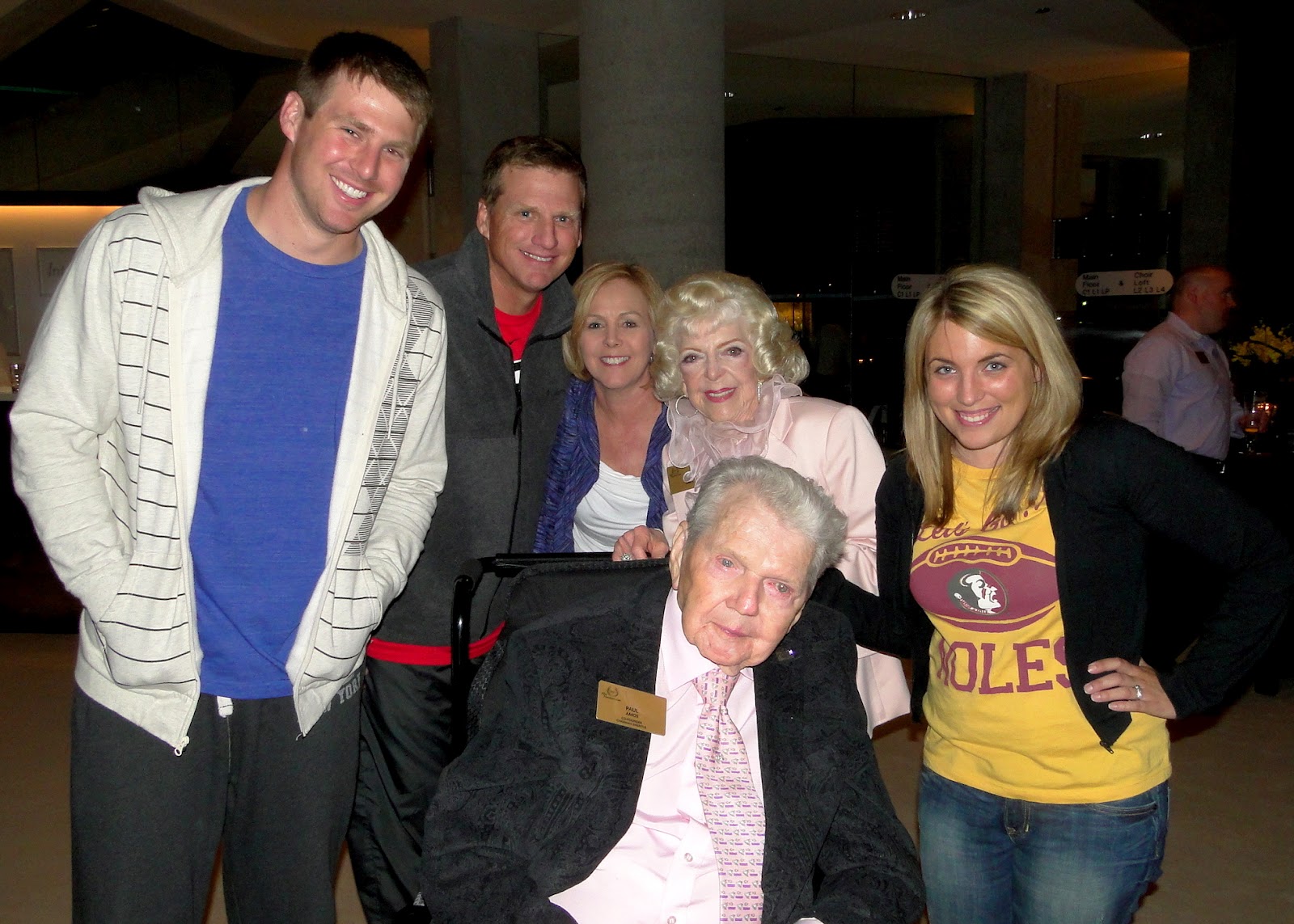 While I wasn’t overly pumped for the trip to Toronto, Aflac did treat us like royalty. We stayed at The Ritz Carlton. I’ve never stayed at one before, and (obviously) neither has Zach. It CRACKS me up because Zach said to me “I’ve always wanted to stay at a Ritz Carlton.” Haha YEAH RIGHT. When I met him the kid never wanted to leave Valdosta and swore he’d never go to NYC (and now we’ve been twice and we WILL be going back!). I highly doubt Mr. Valdosta had some long term dream of staying in a Ritz hahaha. Now that we’ve stayed in one though, I think we will BOTH be dreaming of getting the chance to stay in another!!!

I loved the bathroom 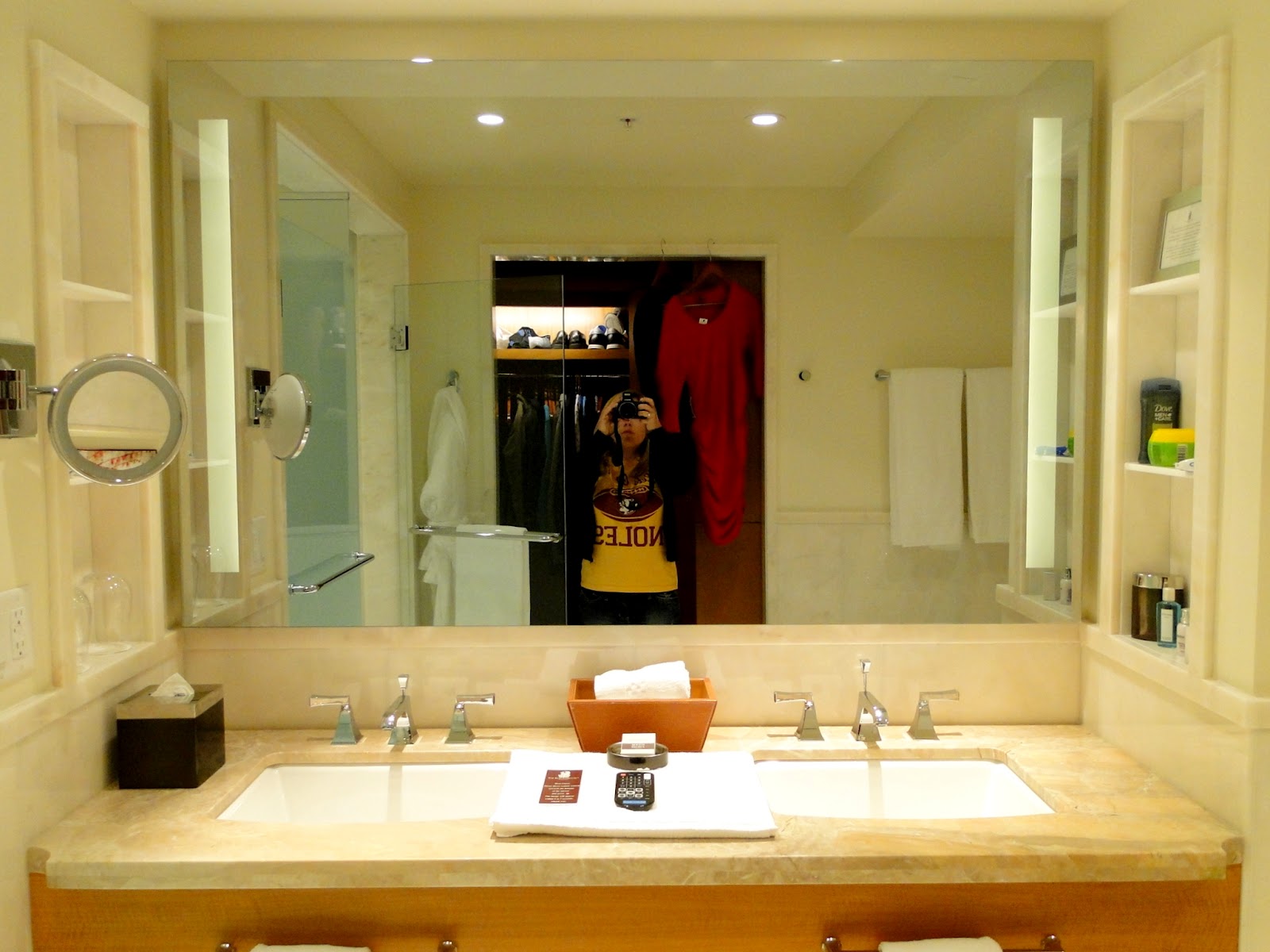 With a tv IN THE MIRROR 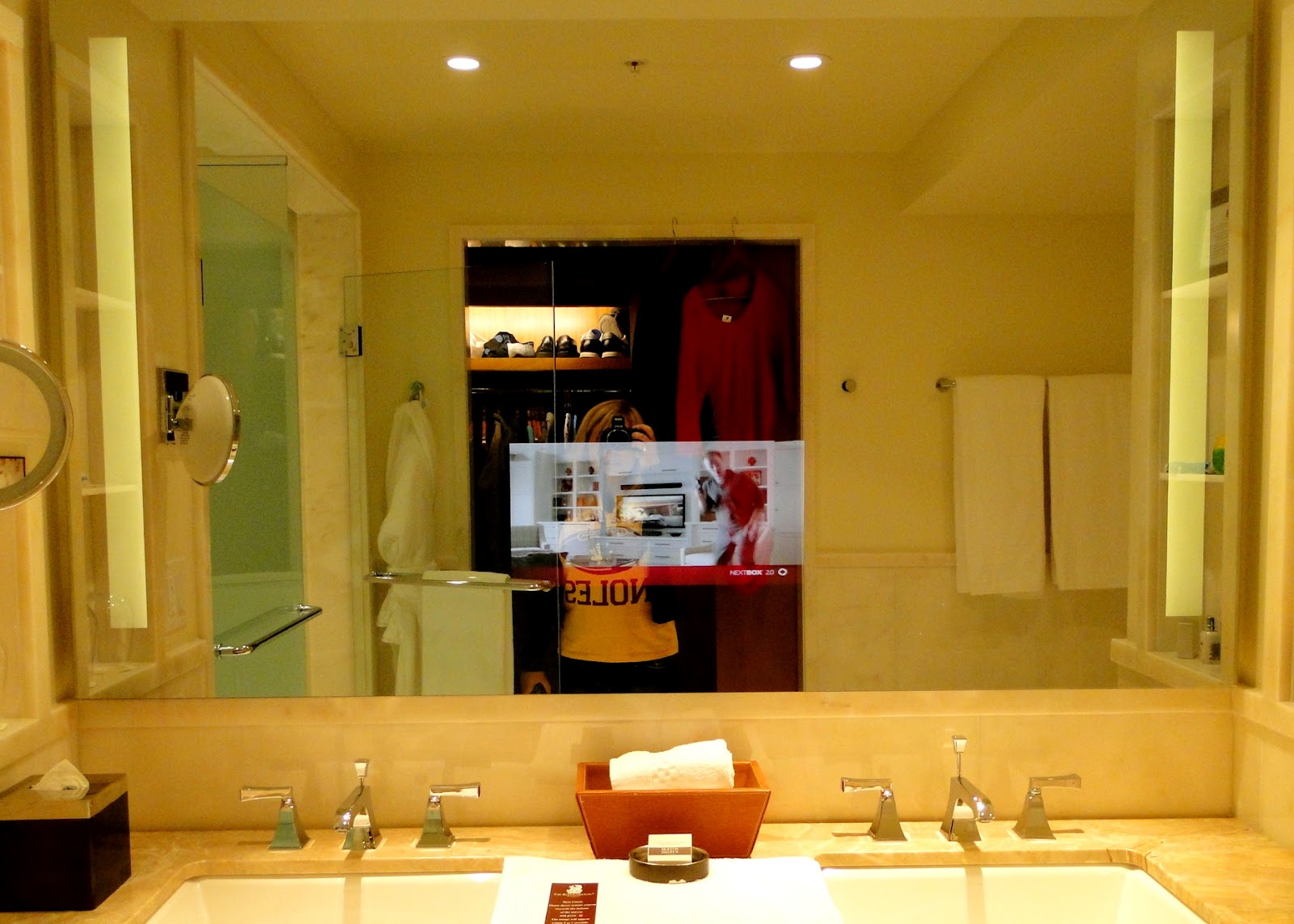 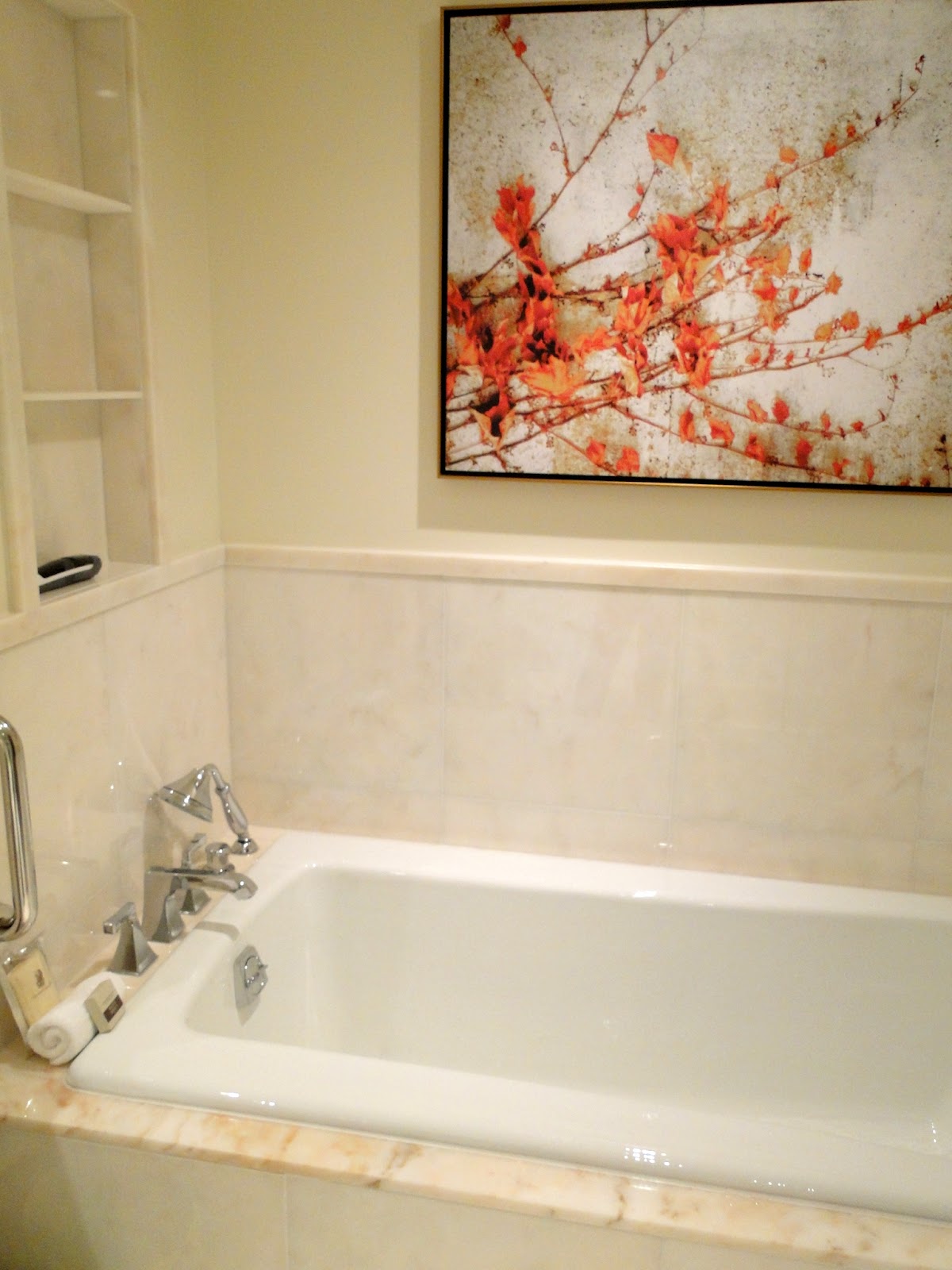 The shower was wonderful and when Zach redoes our shower we totally want to put in this mirror/shelf section. Perfect for him to shave his face and a ledge for me to shave my legs! 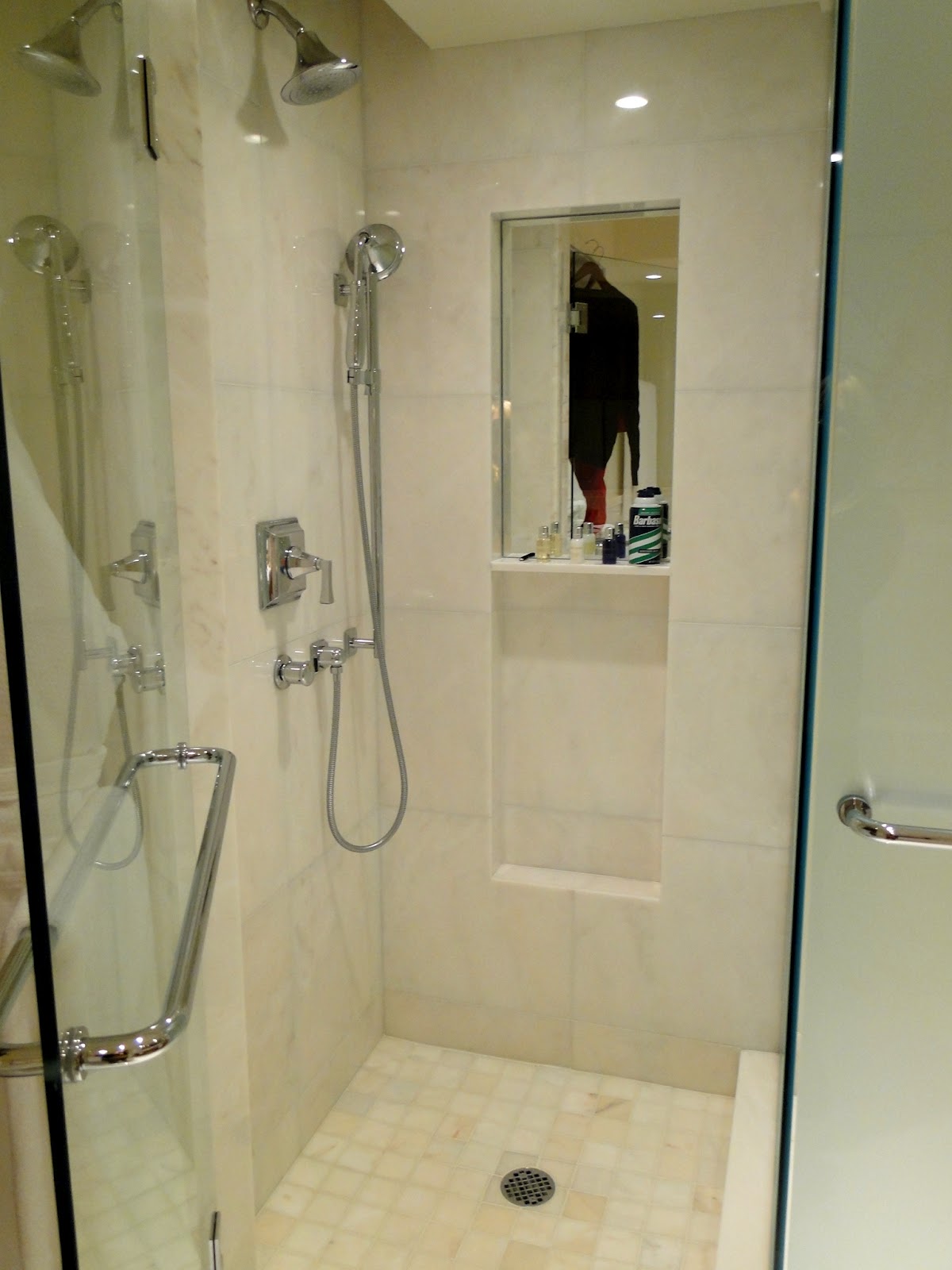 I’m so glad I looked up the hotel online prior to traveling or else I would have not known that there were HEATED FLOORS!!! 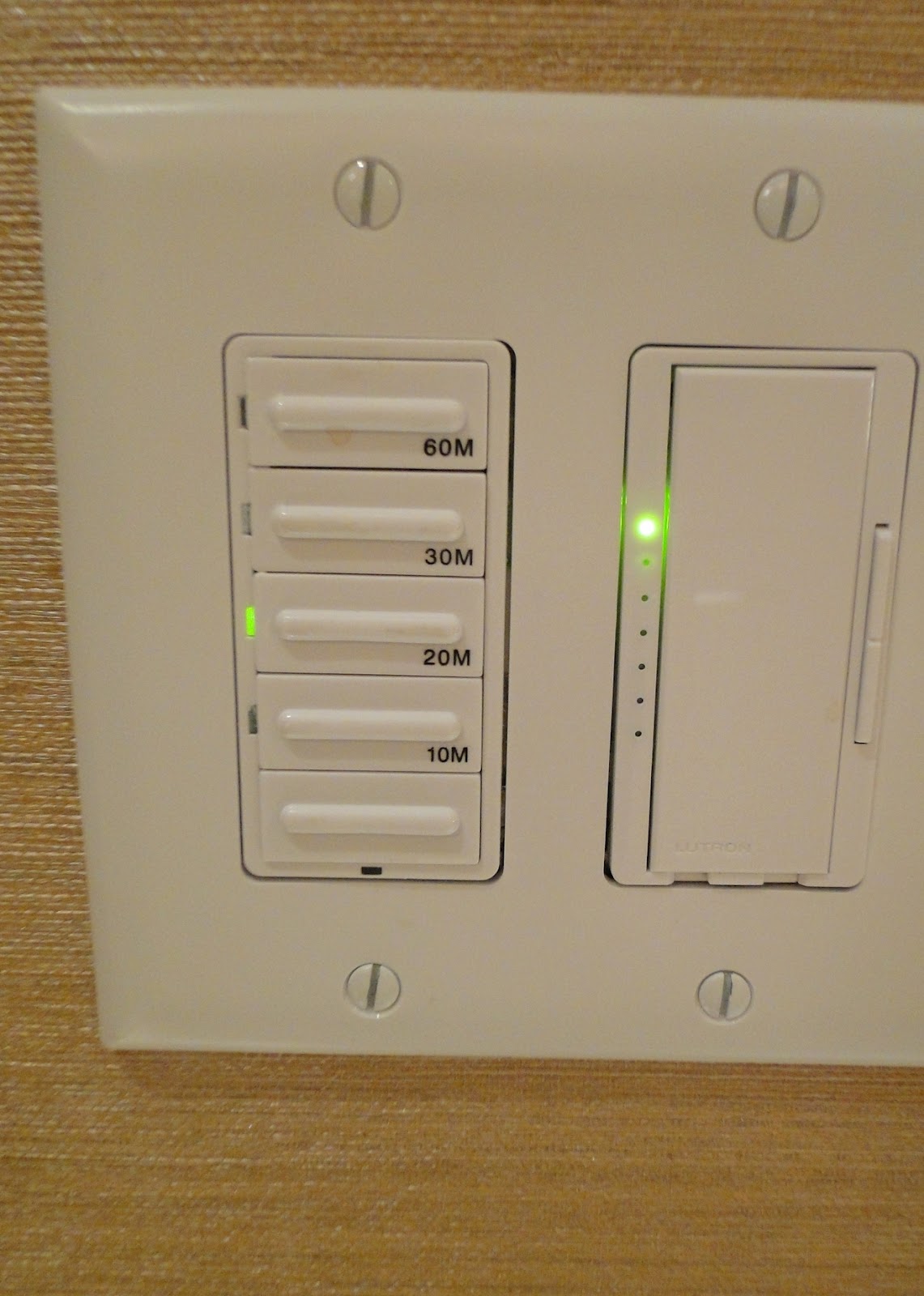 They even Aflac’ed up our room keys! So awesome! 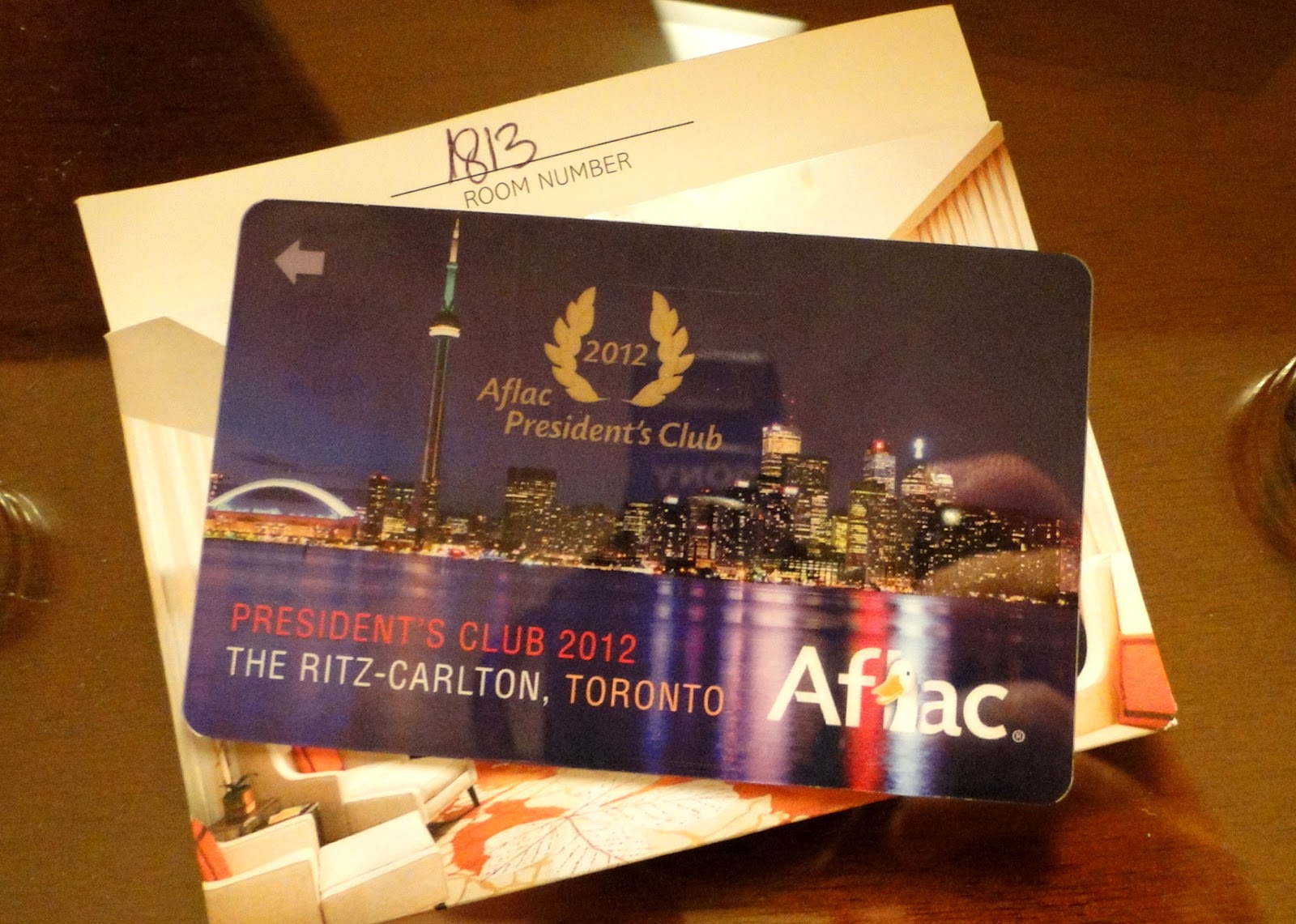 This is going to sound totally snobby of me, but I like to be legit. I had a rough day. Leaving the kids was HARD (it’s harder to leave Kye now that he’s older because he really understands ya know?). Dealing with all the flight mess SUCKED. Missing out on Aflac stuff wasn’t fun. Having a whole day of travel instead of relaxing was super disappointing. Well then when we checked in we were the LAST of the Aflac crew to arrive. And we opened the door to see this. Two double beds. Really?!?! Zach is 6’6″. We only have a queen bed at home…and while I enjoy sleeping close to him, it’s AWESOME to travel and get to spread out in a big king! Seeing these small beds brought me to tears. It was just a ROUGH day. I have never complained about anything to a hotel staff. We just deal with what we’re given, especially when we’re not paying for it! However, I called down and asked if they had any other rooms. They didn’t. Let me add that Mr. Rusty and Mrs. Charlotte checked in right after us and guess what…they had a free upgrade to a SUITE. Like it had two bathrooms in it! I was mildly bitter to say the least haha. However, I think I just really needed some rest. When I woke up the next morning I felt fine about our room and sleeping situation (I mean the beds were beyond comfortable so who can complain!?) and we just enjoyed it! 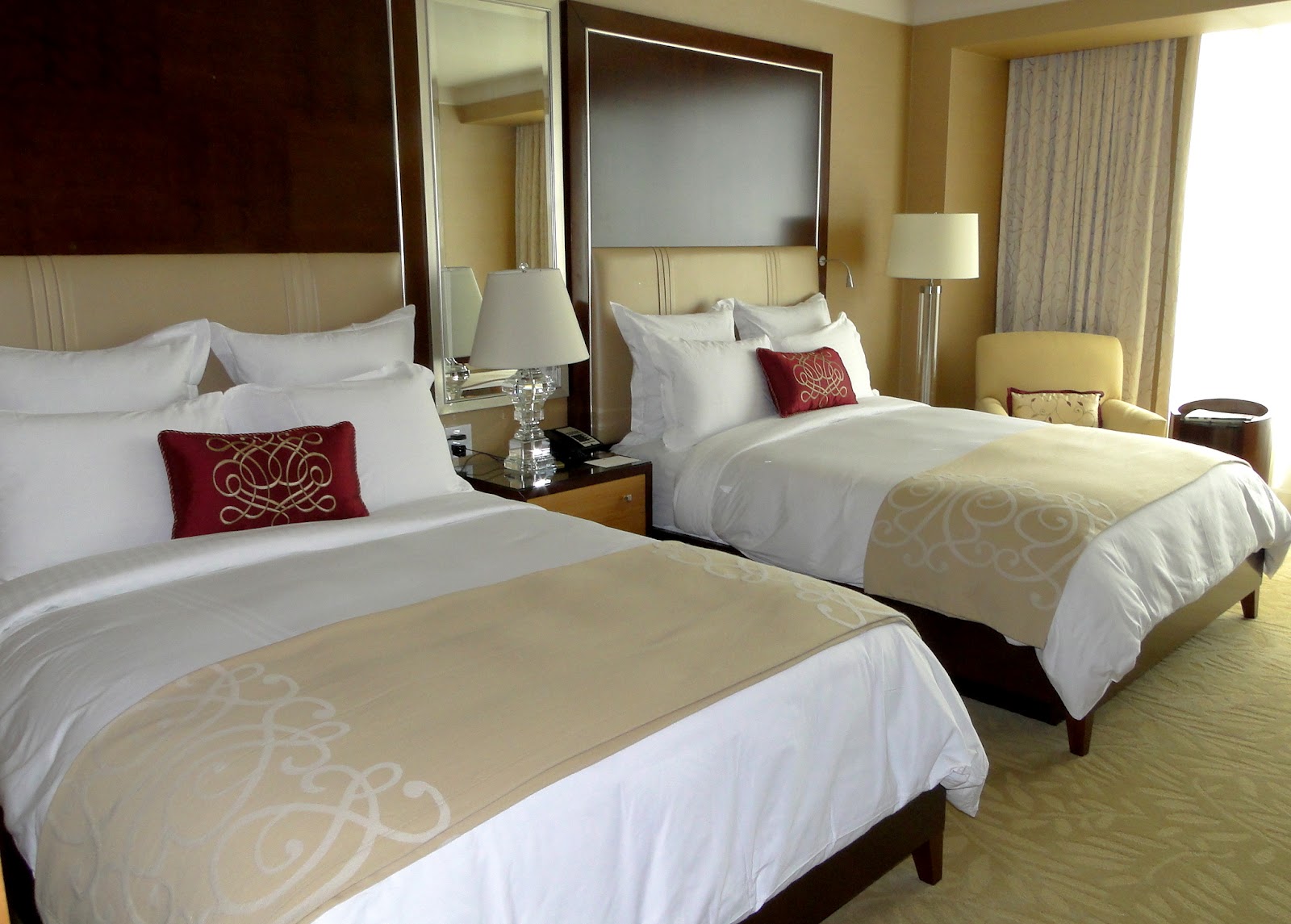 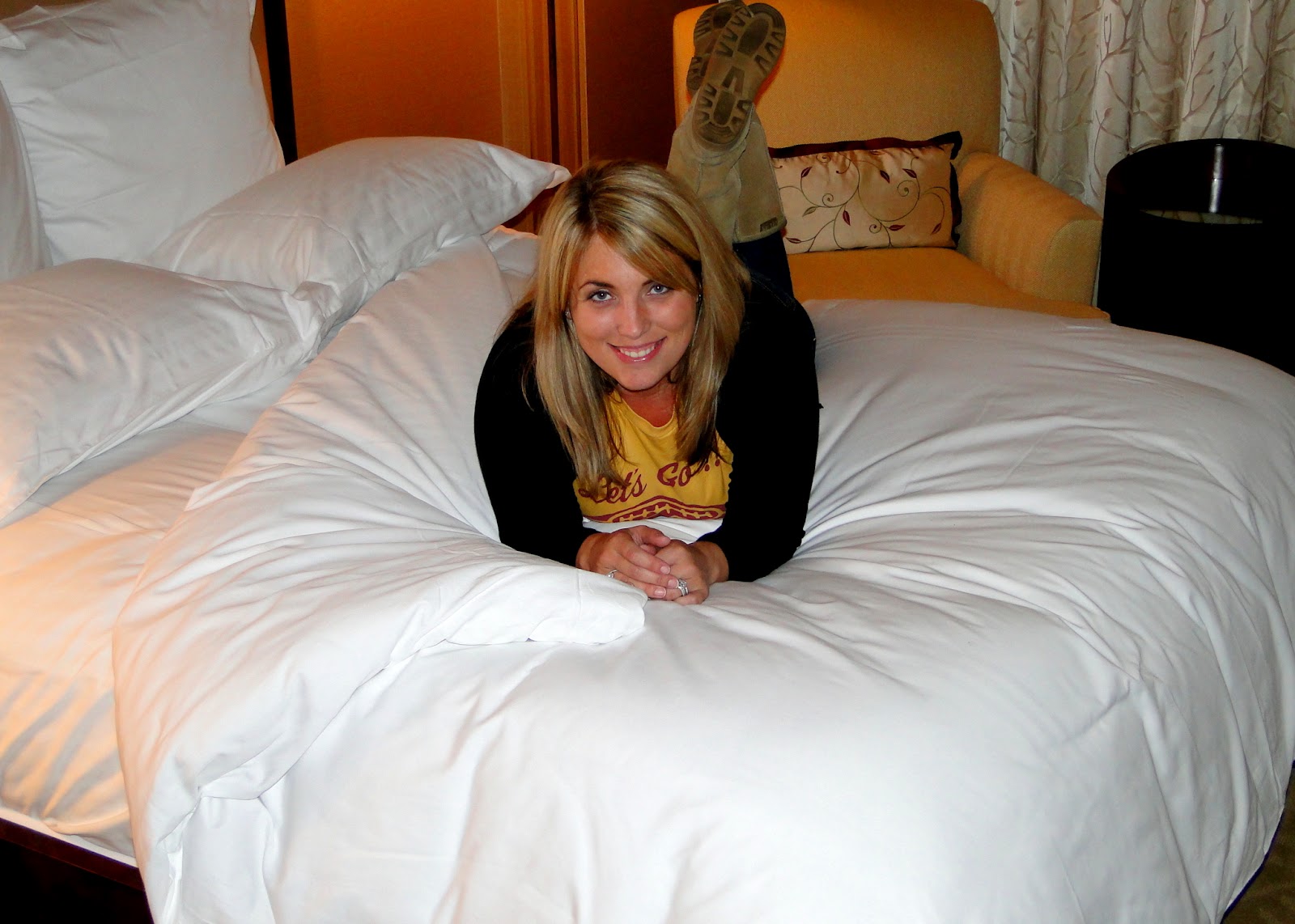 Desk area…the free wifi was SO nice, we rarely get that when traveling! 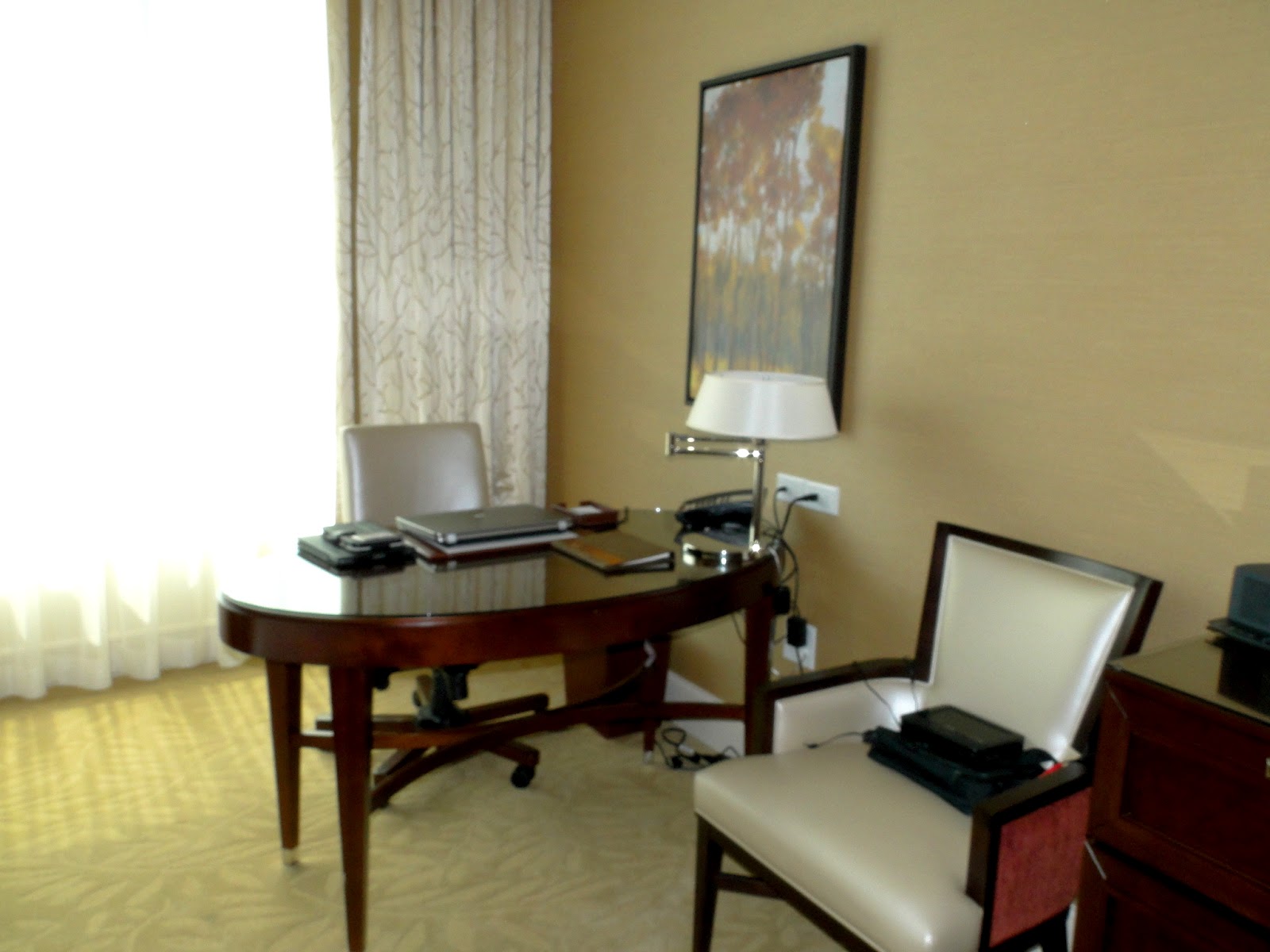 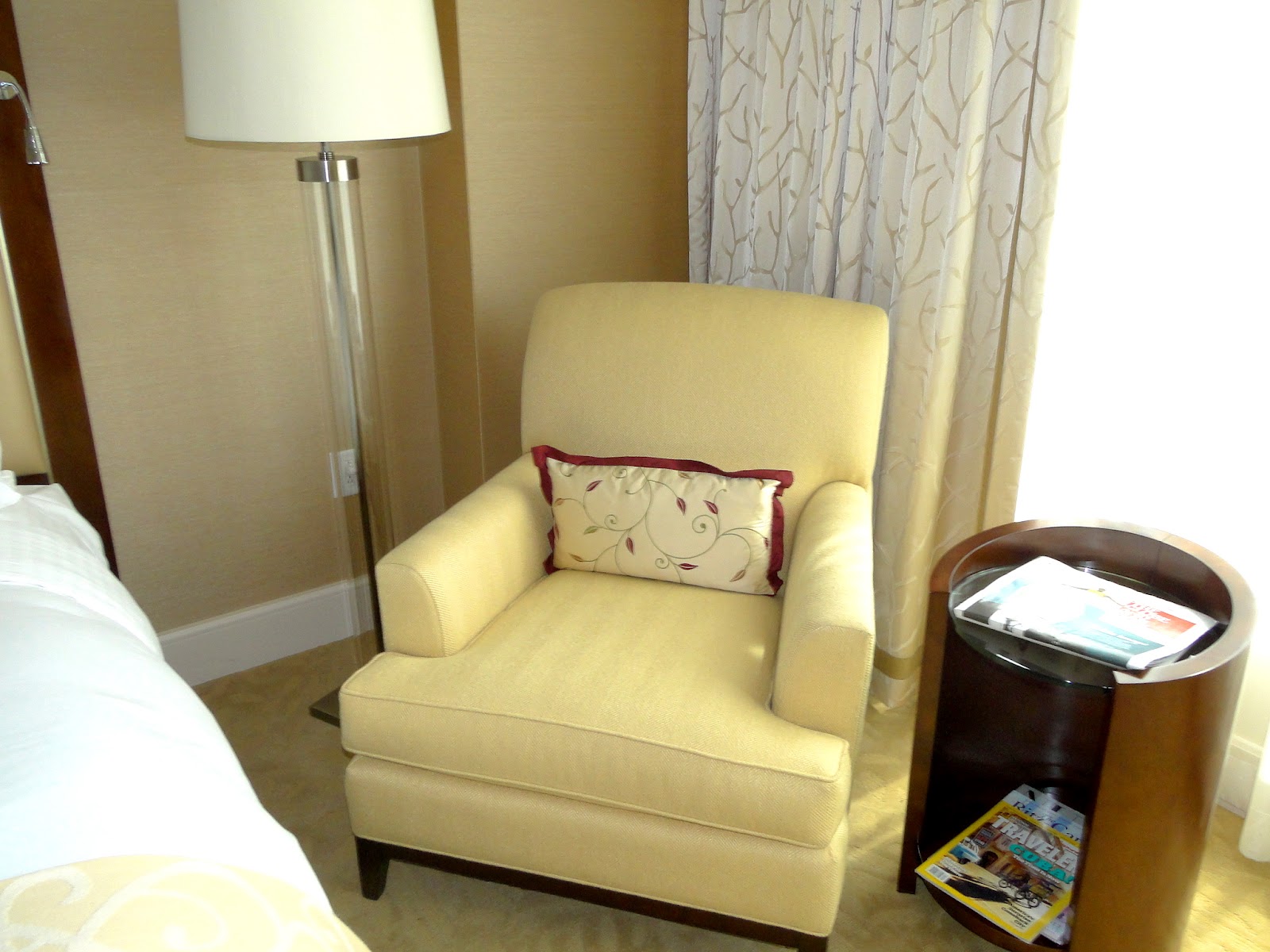 View from our room

The tall thing is the CN Tower! 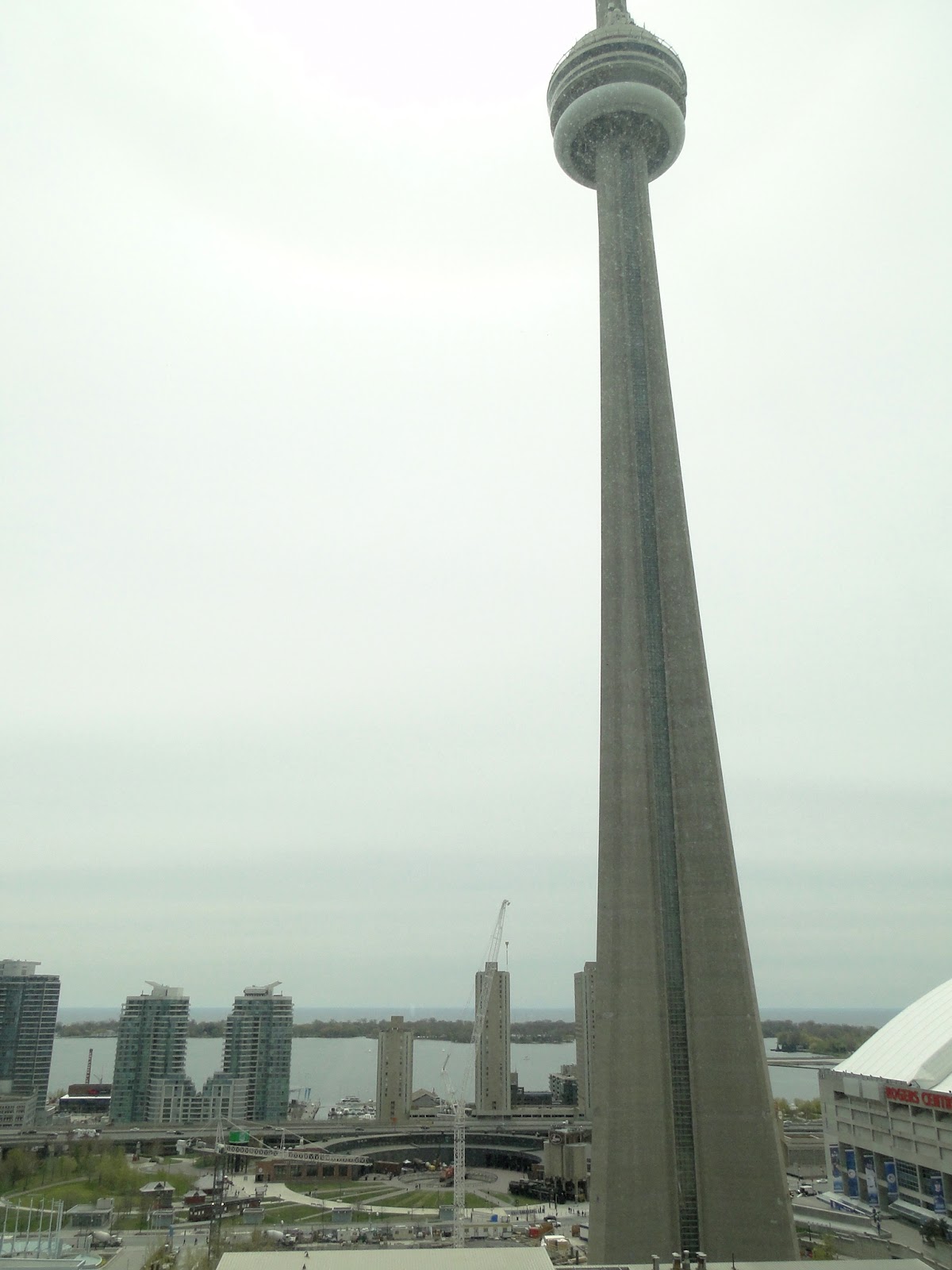 More of our view 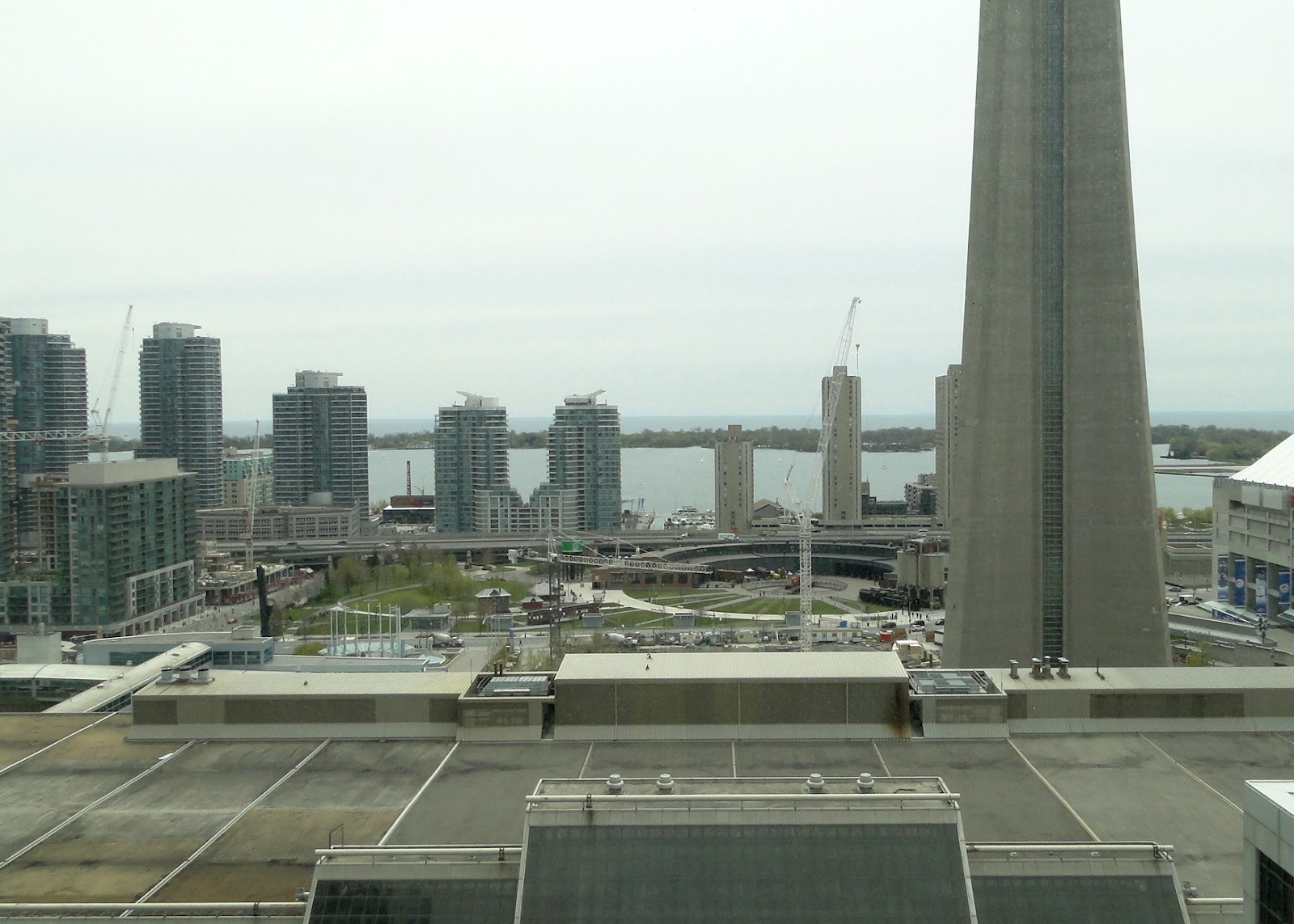 Note from our “room attendant” 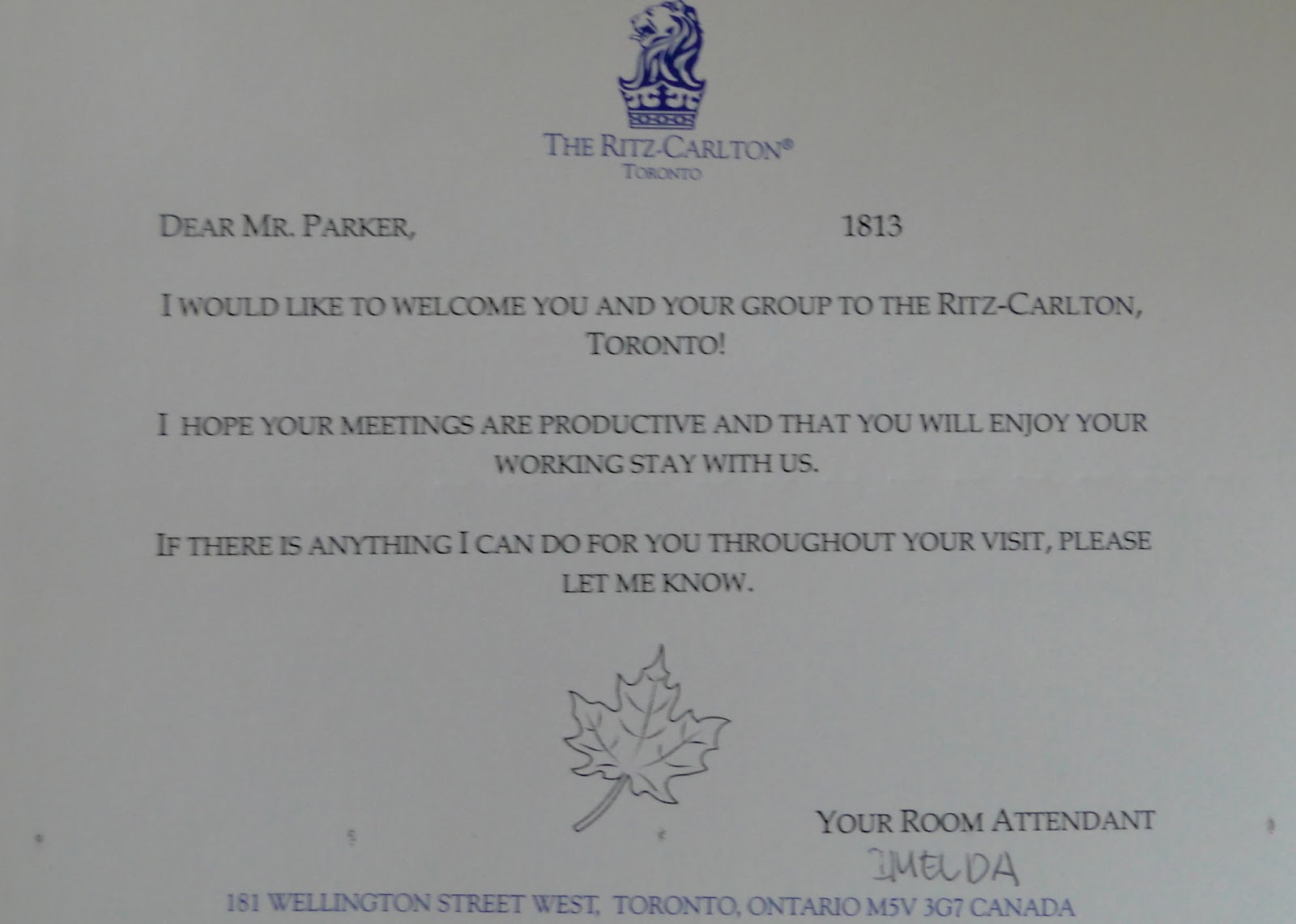 The had two daily cleaning services and a turn down service. We rarely took advantage of it but our “room attendant” learned quickly that we DID love the chocolates 🙂 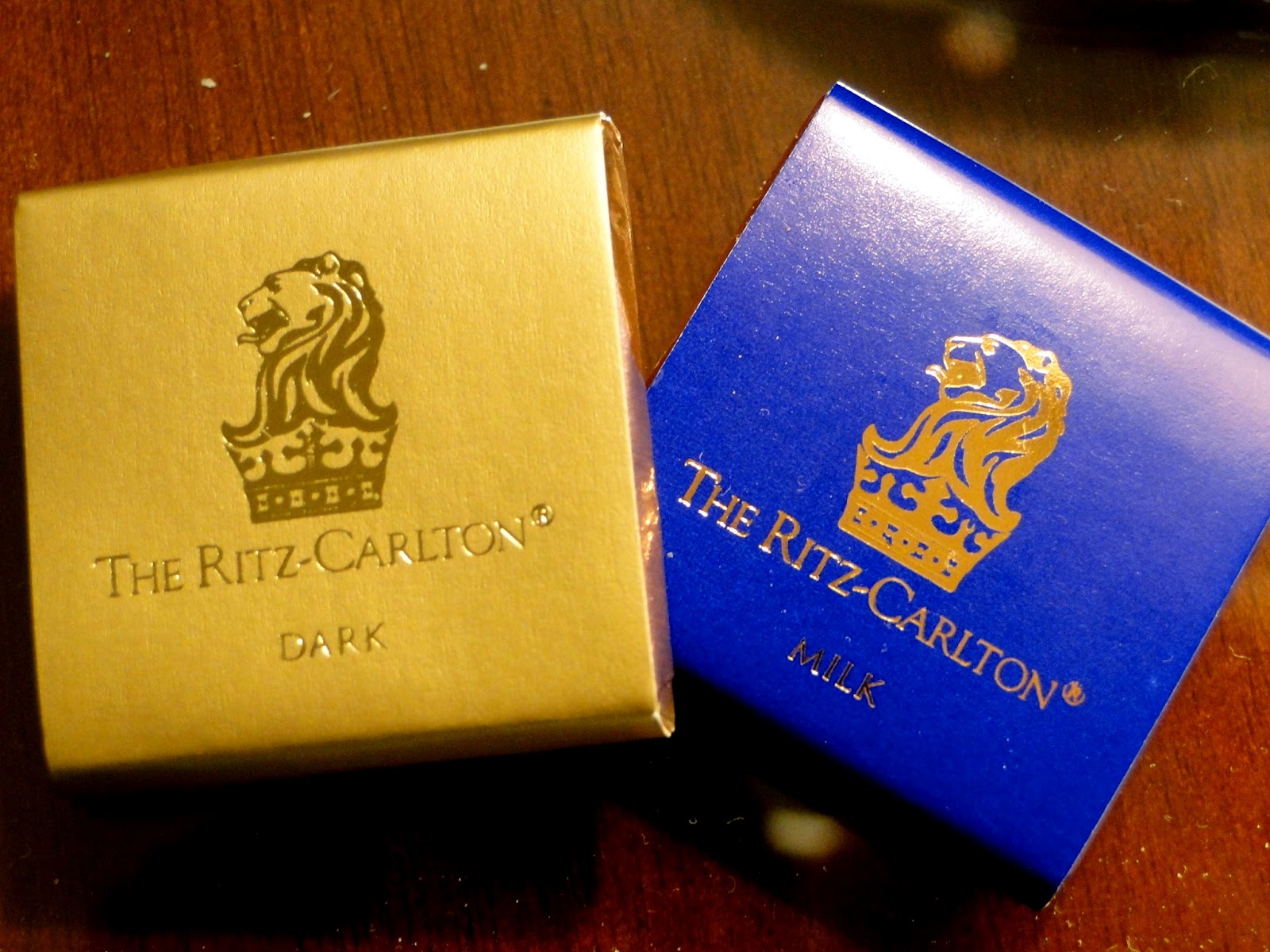 THIS was all I wanted to do during the trip!!!
Cuddling up watching The Office was the PERFECT ending to a rough day 🙂 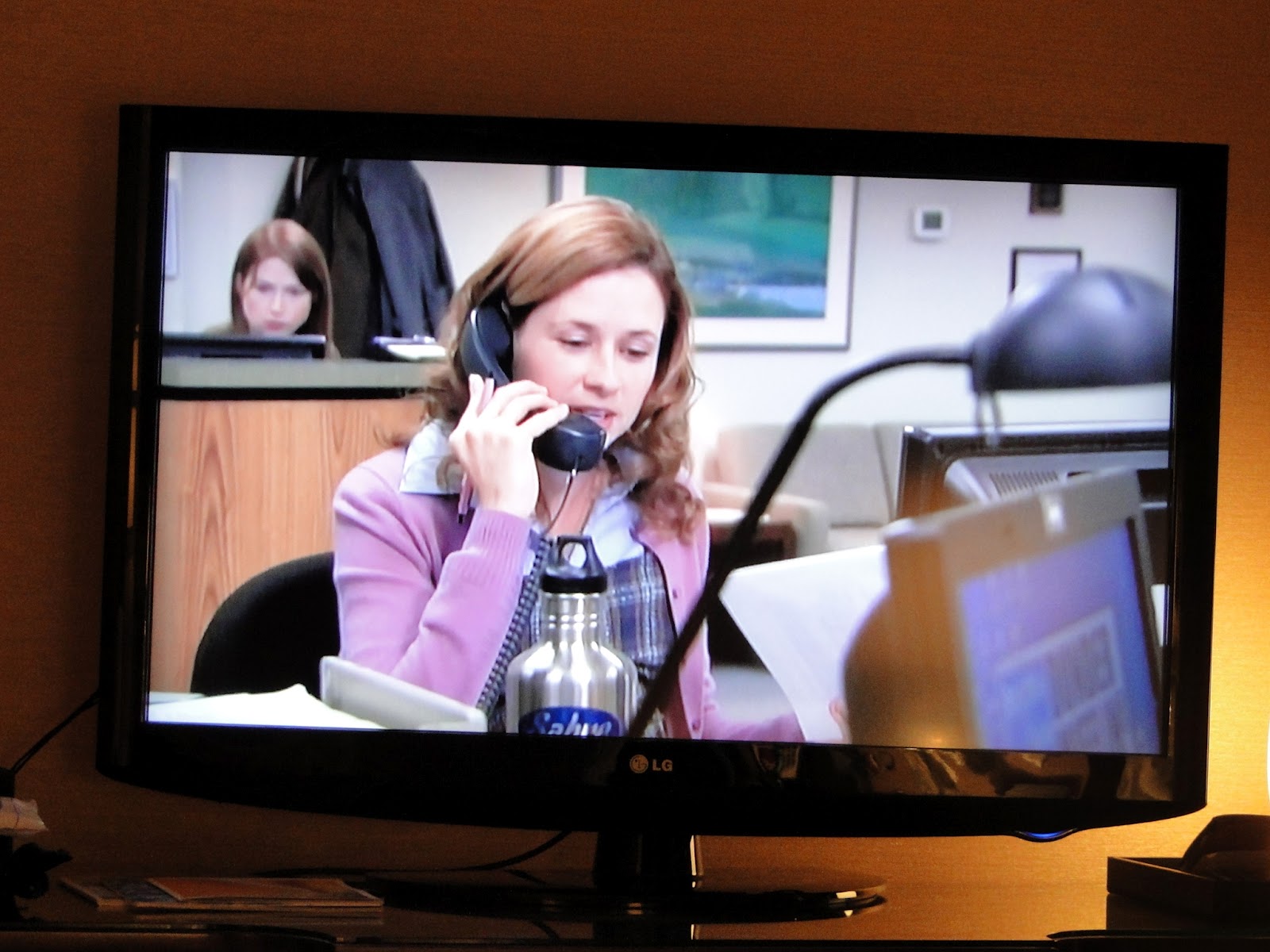 Yes, the trip DOES get better! I promise 🙂