On Sunday things got a bit shuffled. Aflac had a Political Action Committee breakfast where former president Bill Clinton was supposed to speak but he had to reschedule so we still went to the breakfast but it was over much quicker than we’d planned! This is the day that the rain finally caught up with us and it was not too fun. My anti-umbrella husband actually broke down and used one on our long, wet walk to the Empire State Building. 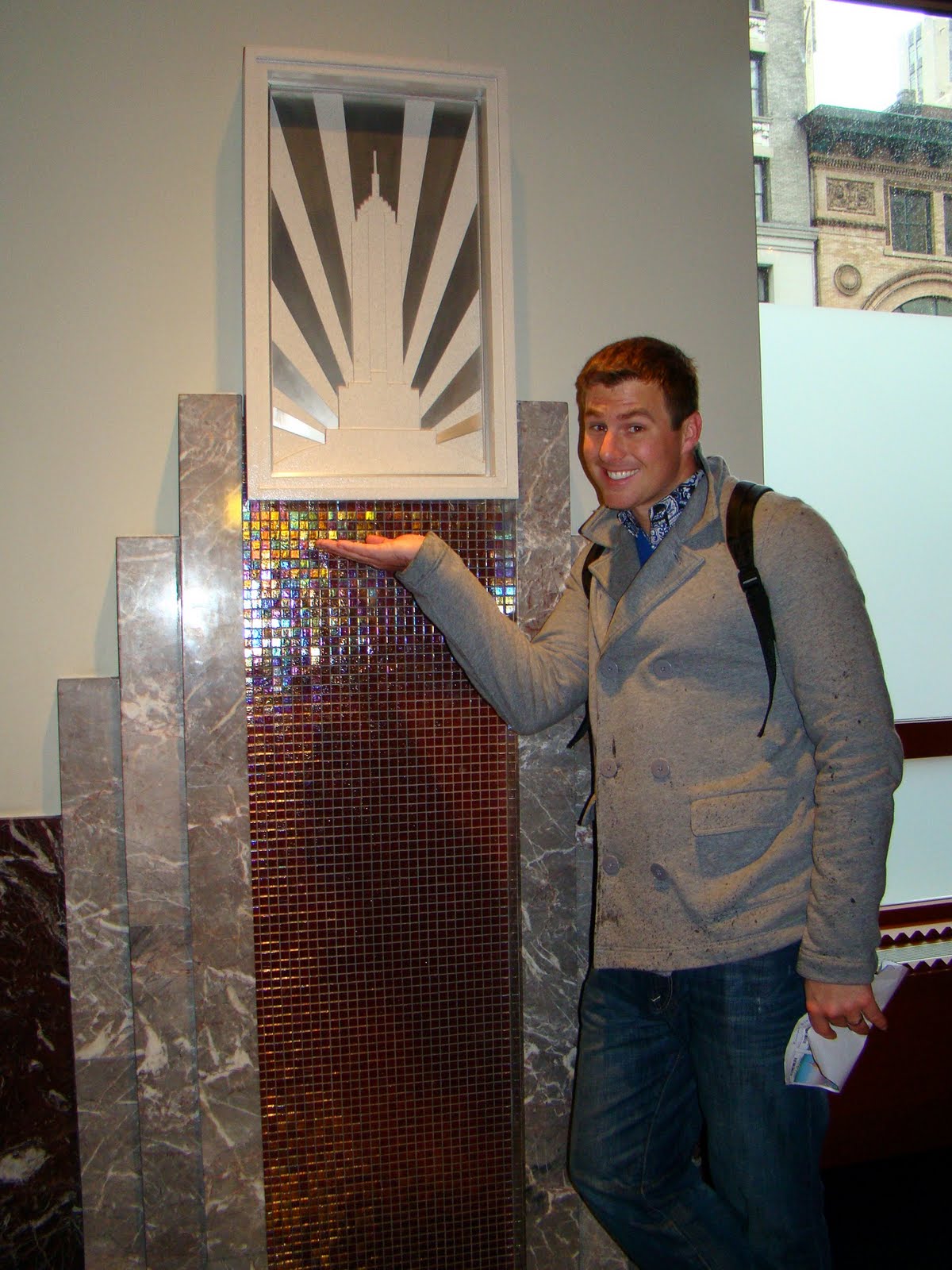 I had purchased our tickets for the Empire State Building online in advance because I had read that there are often 3 hour long lines! We dealt with that when we went to the Eiffel Tower and didn’t want to waste our day so we did the advance ticket thing. I totally wish I hadn’t done that! First off, if we hadn’t already bought tickets we wouldn’t have gone during the bad weather. Secondly, there were NO LINES. Since it was raining we walked right in! And thirdly, they give student discounts (even after you graduate, still carry your student id…it works wonders!) so I could have gotten the tickets cheaper too! Oh well live and learn. We basically ran out on the platform, snapped some pictures and ran back in! haha! 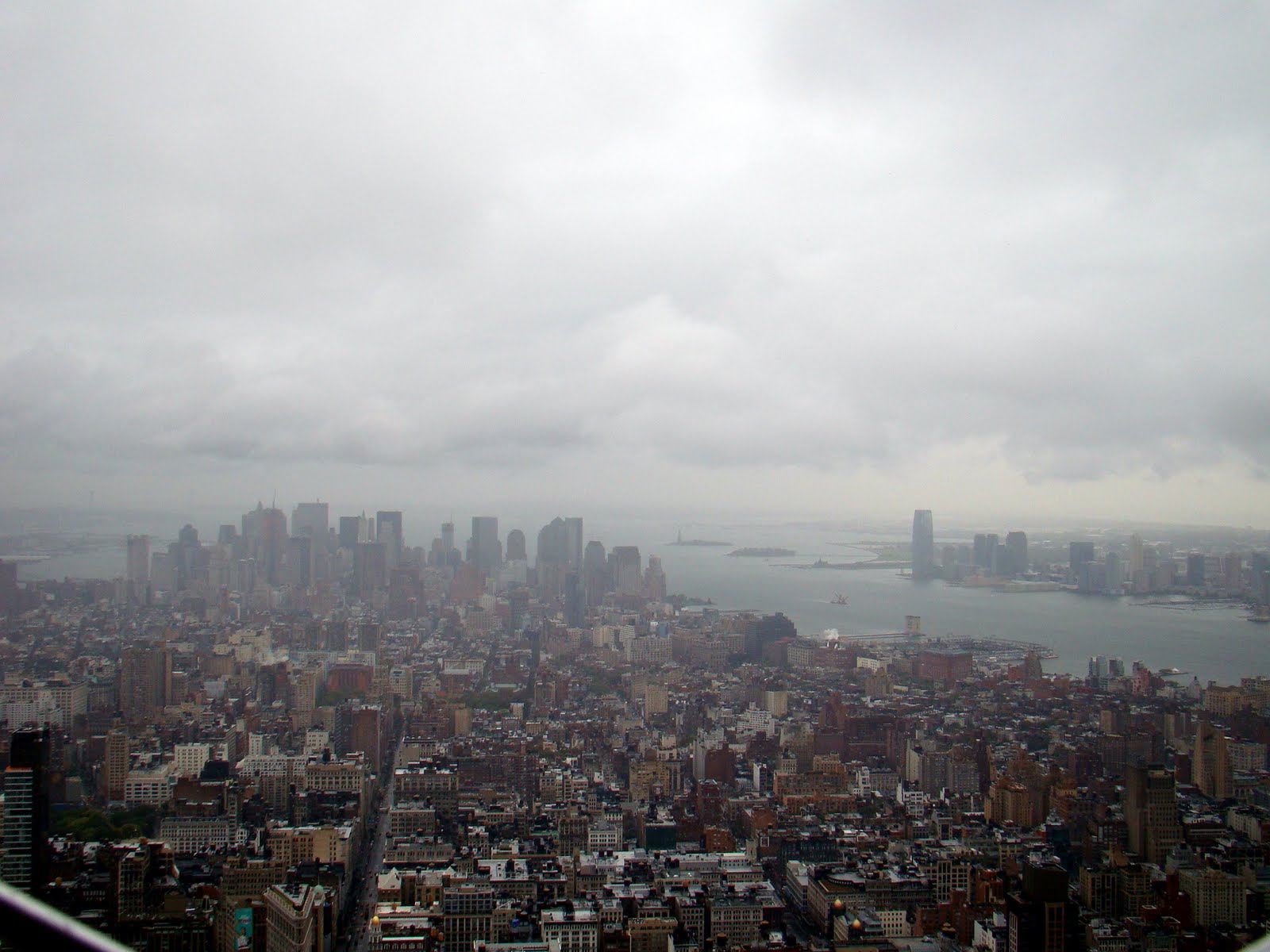 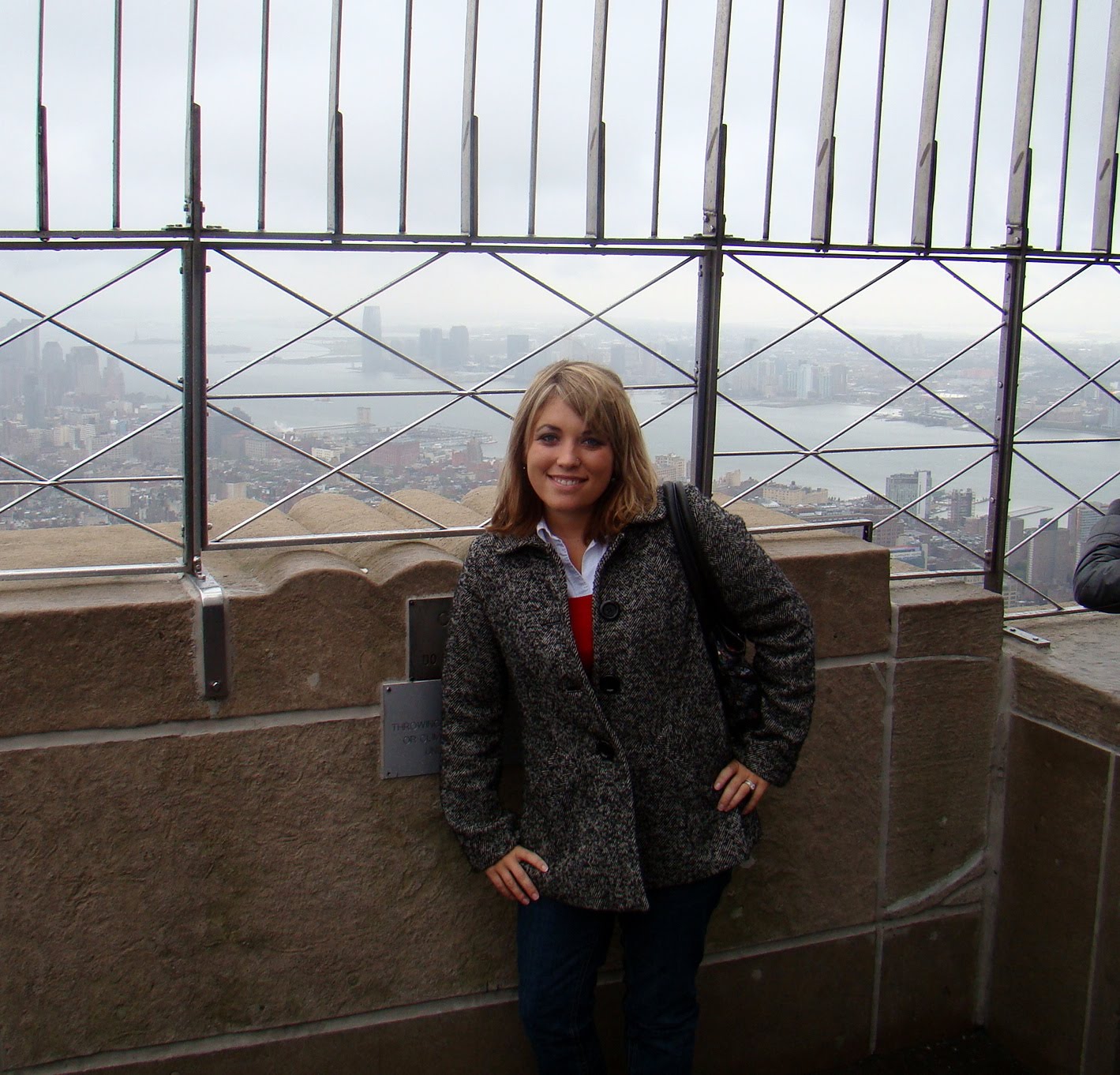 The best part of it was the gift shop! I know that’s random but they had awesome deals!!! We got Kye a 55 piece plastic tool set for $2.99! And our Christmas ornament souvenir (a cute Santa as the Statue of Liberty) for only $4.99! Awesome!!! We also saw some people from Valdosta…we heard their accents first then Zach recognized them as some ladies he had sold insurance to and we actually ended up being on the same flight with them back home too. Small world! We didn’t buy these…but it was tempting 😉 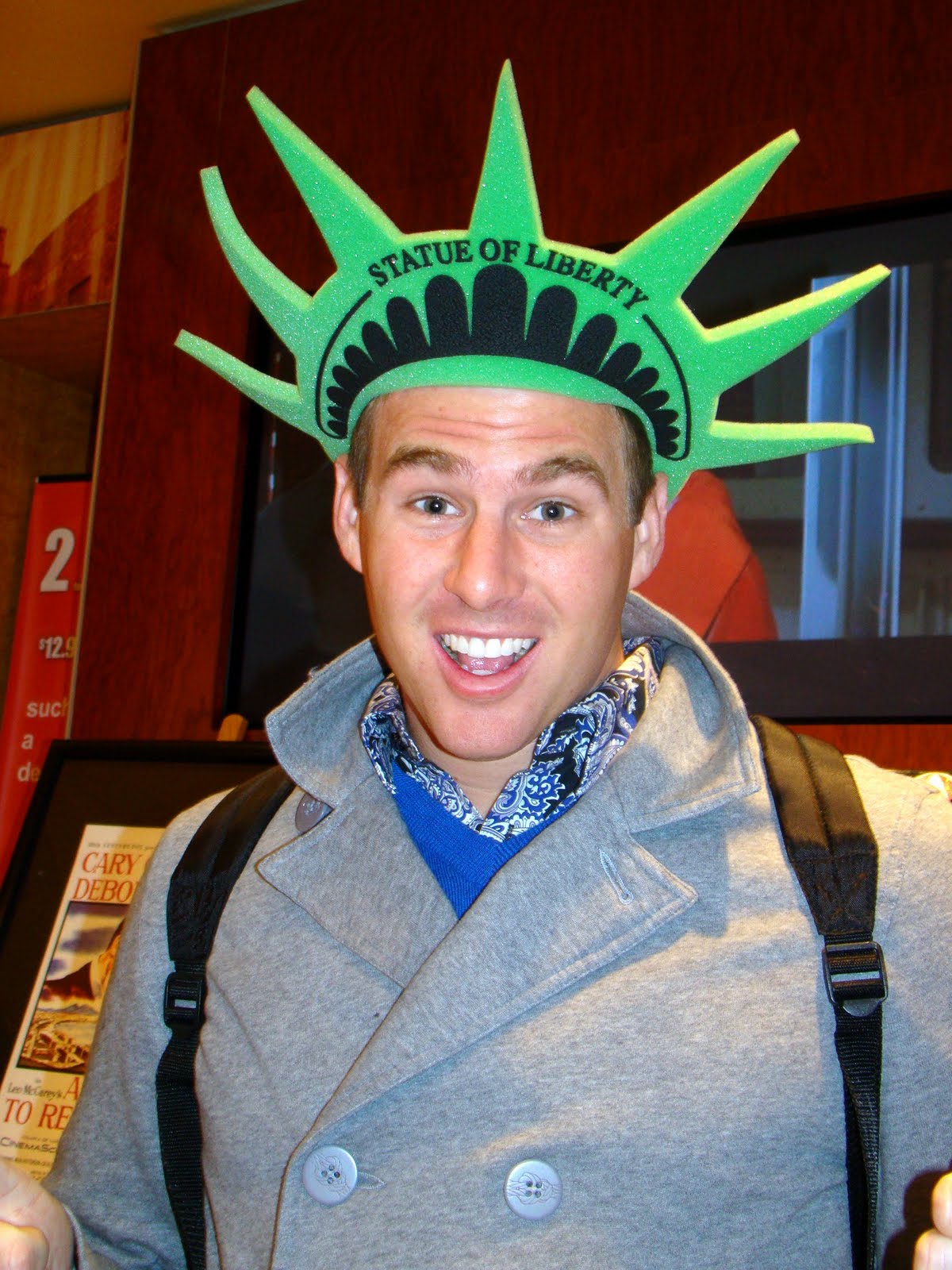 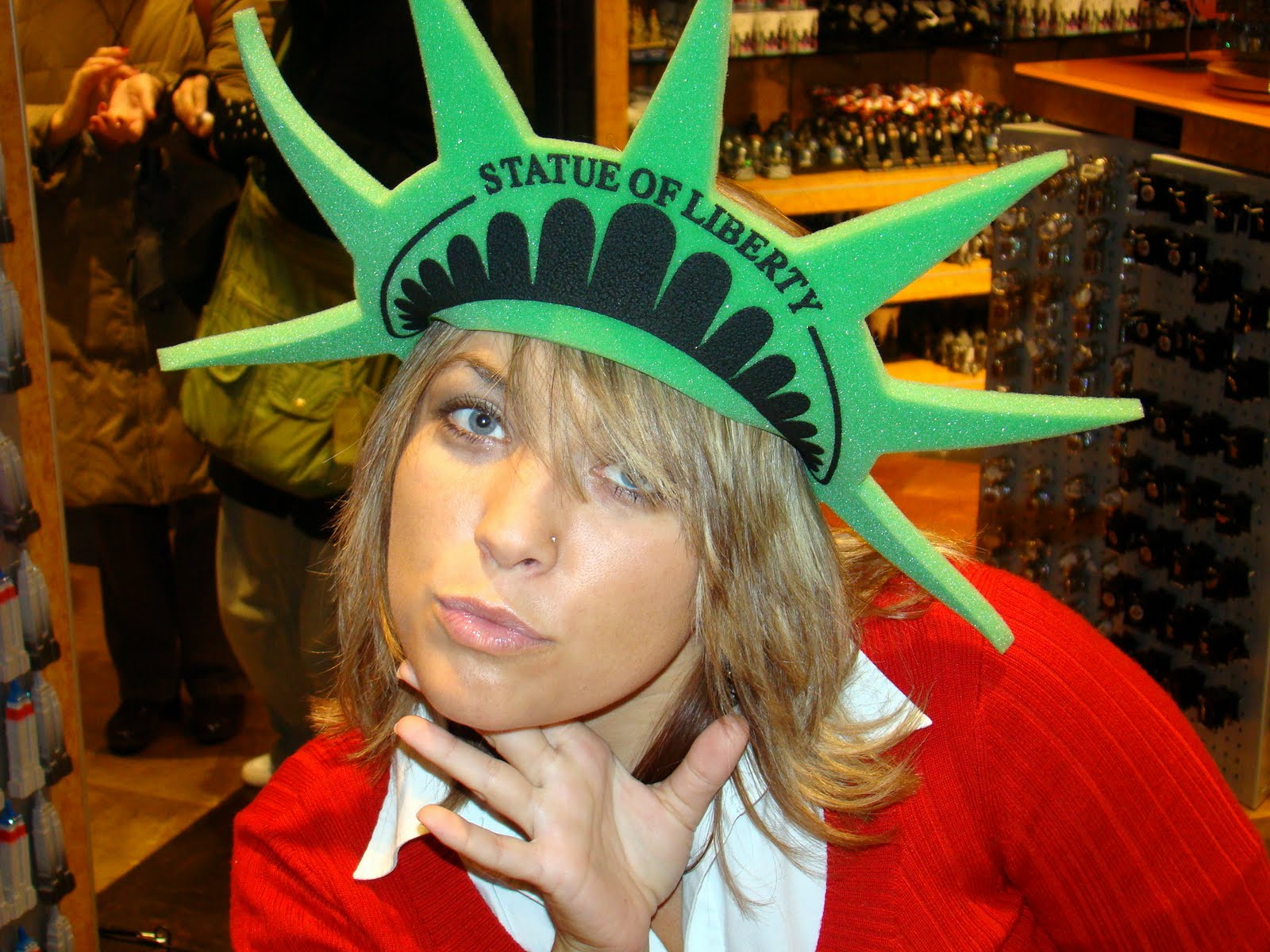 There was an Express store across the street so we hit that up which was fun as it’s Zach’s favorite store. He got a really cool purple sweater for only $10 (those things are usually $80!) and I found some things I like that I may or may not see on my upcoming birthday 🙂 We opted to ride the subway back to the hotel to avoid the rain and I pumped before walking to lunch! We had eaten at Carmine’s our first time in the city while on our honeymoon and LOVED it! This time we split (it’s family style) the manicotti and it was wonderful. We were sitting around a lot of families and it made me miss my baby but I knew I only had one more day till I would see him again 🙂 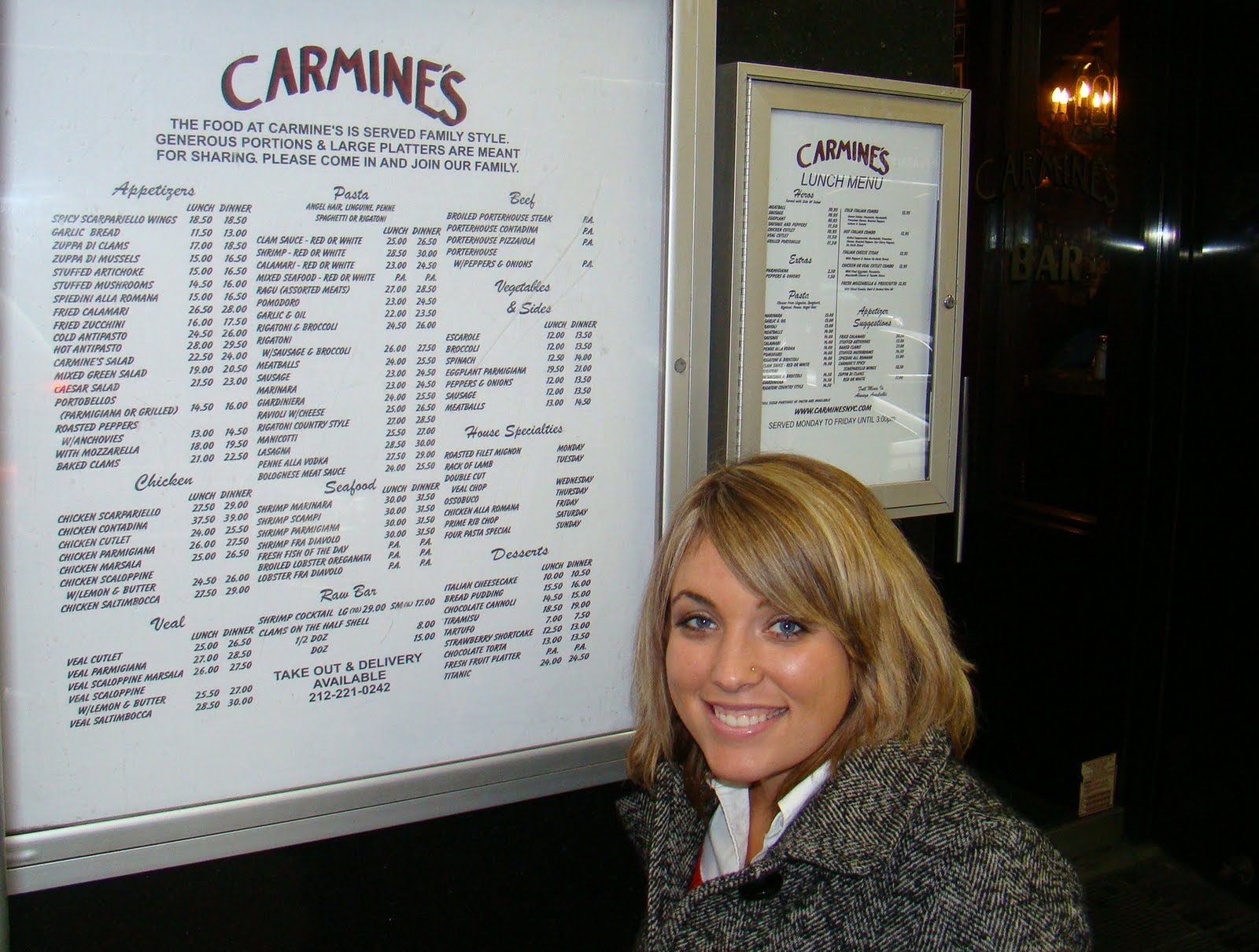 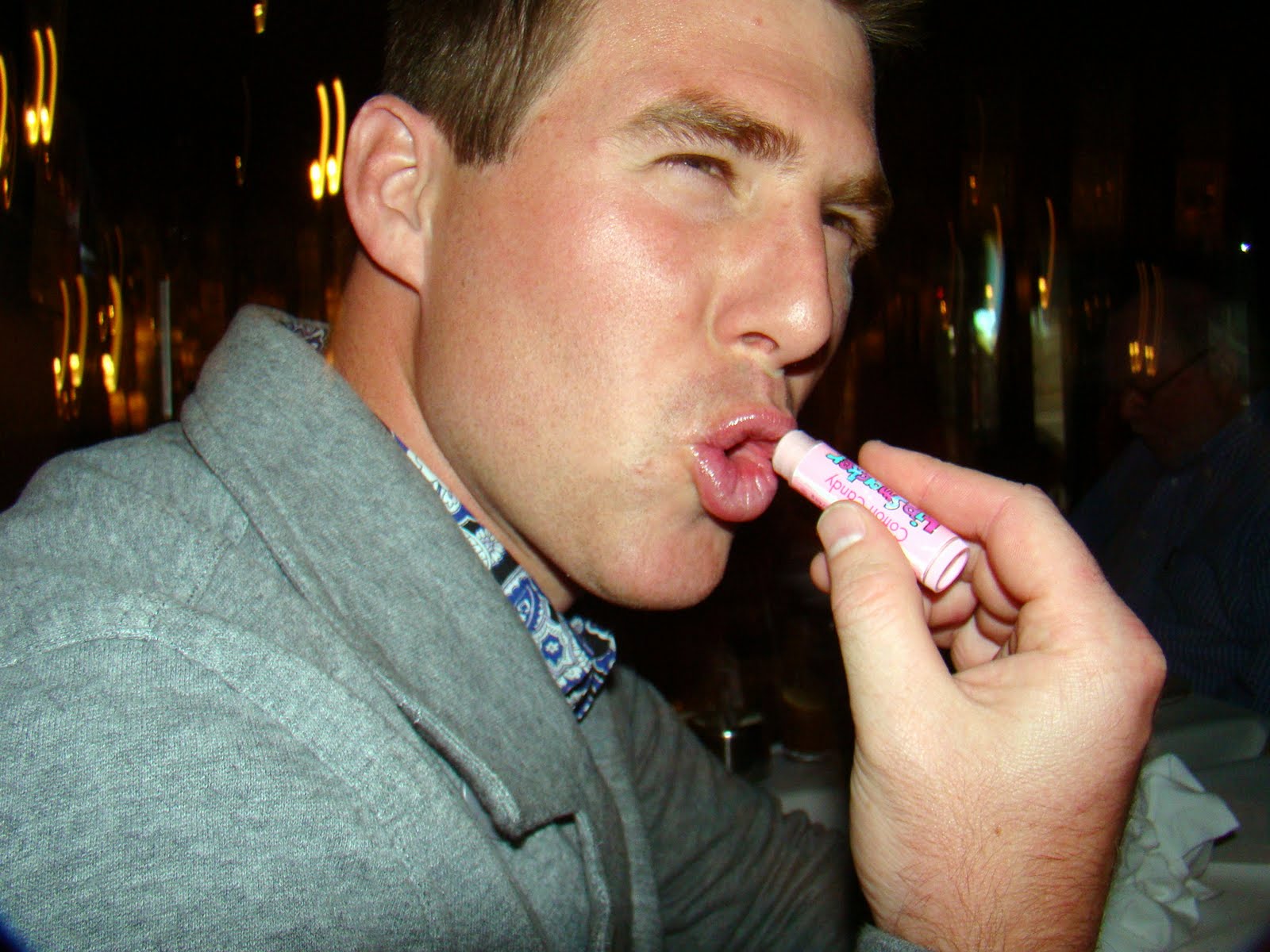 After lunch we were full and warm and really didn’t feel like venturing back out especially to deal with the Subway system. When we went last time it was so easy and quick but we were there on a weekday and a local told us and the weekend is always screwy! Several trains weren’t running or had changed to different letters. So annoying!!! We went pretty far so the subway was our only option but we wanted to check out the American Museum of Natural History. A little known fact is that if a museum has a “suggested admission” then that means you can actually pay any amount you want. This place had a suggested admission of $18 each but we payed them $5 for both of us haha! They have to accept it because technically they are a non-profit organization! 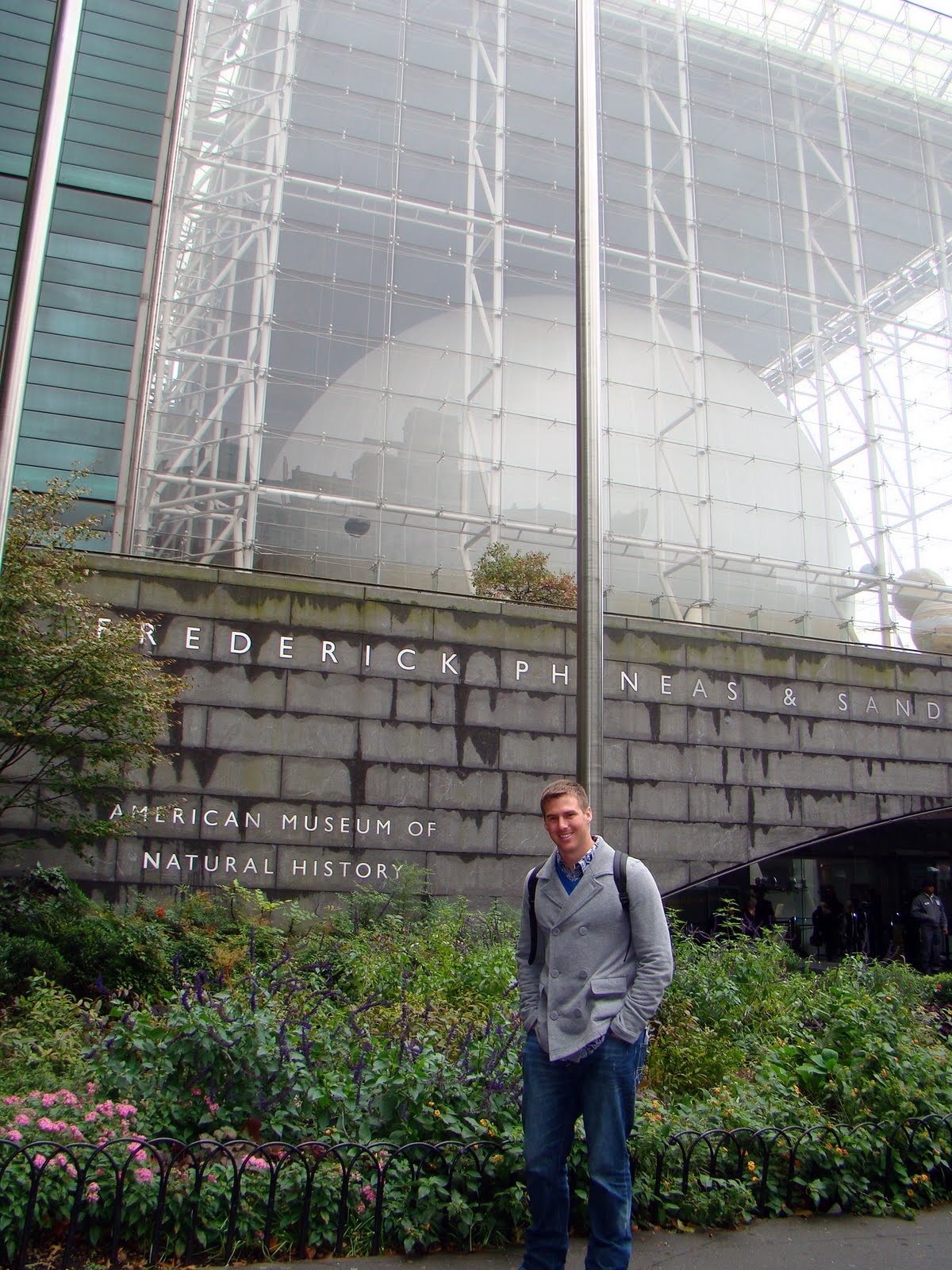 We didn’t have very long to look at the place (only about an hour! because the line was long to get in and we had to get back to get ready for Pres. Clinton!) so we went to see the dinosaurs first and then basically ran through the rest of it. Everyone knows we’re Christians so we believe that GOD made us and that we aren’t who we are as a result of evolution. So basically this was a cool place to look but all the reading was pointless because it’s all based on evolution ideas. We do want to go back to have more time to look and really want to take Kye as I know he’d love to see the dinosaurs! 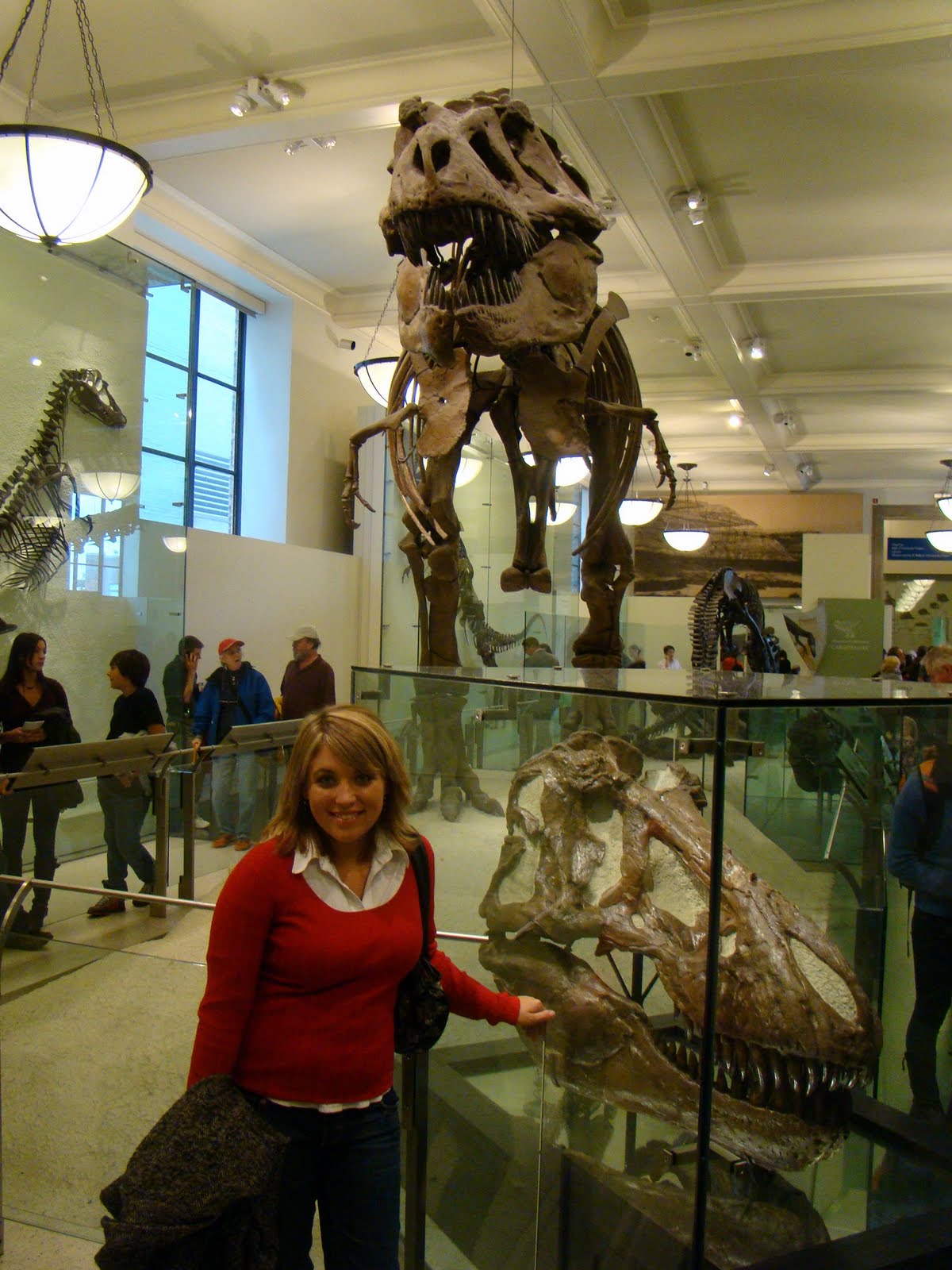 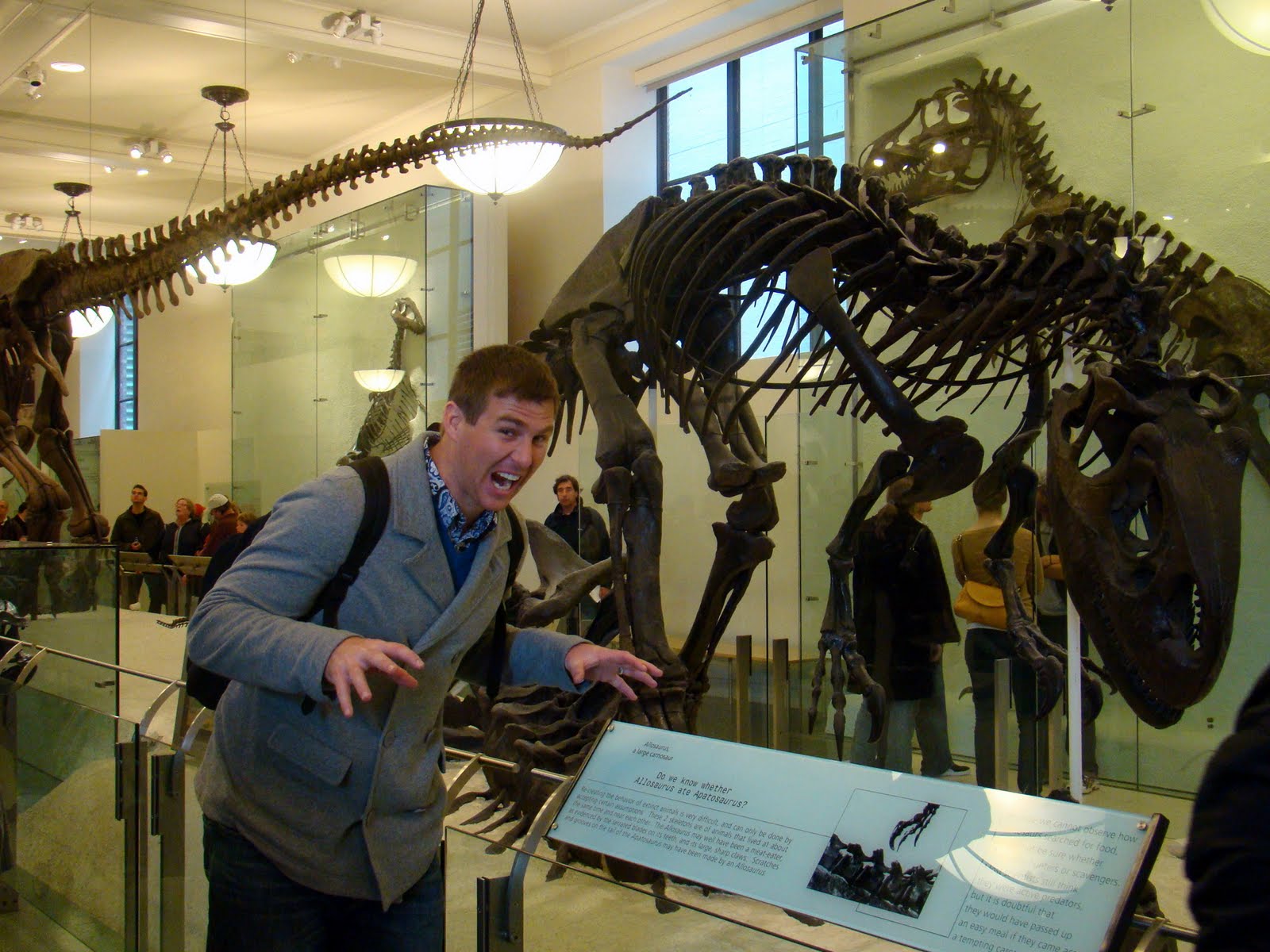 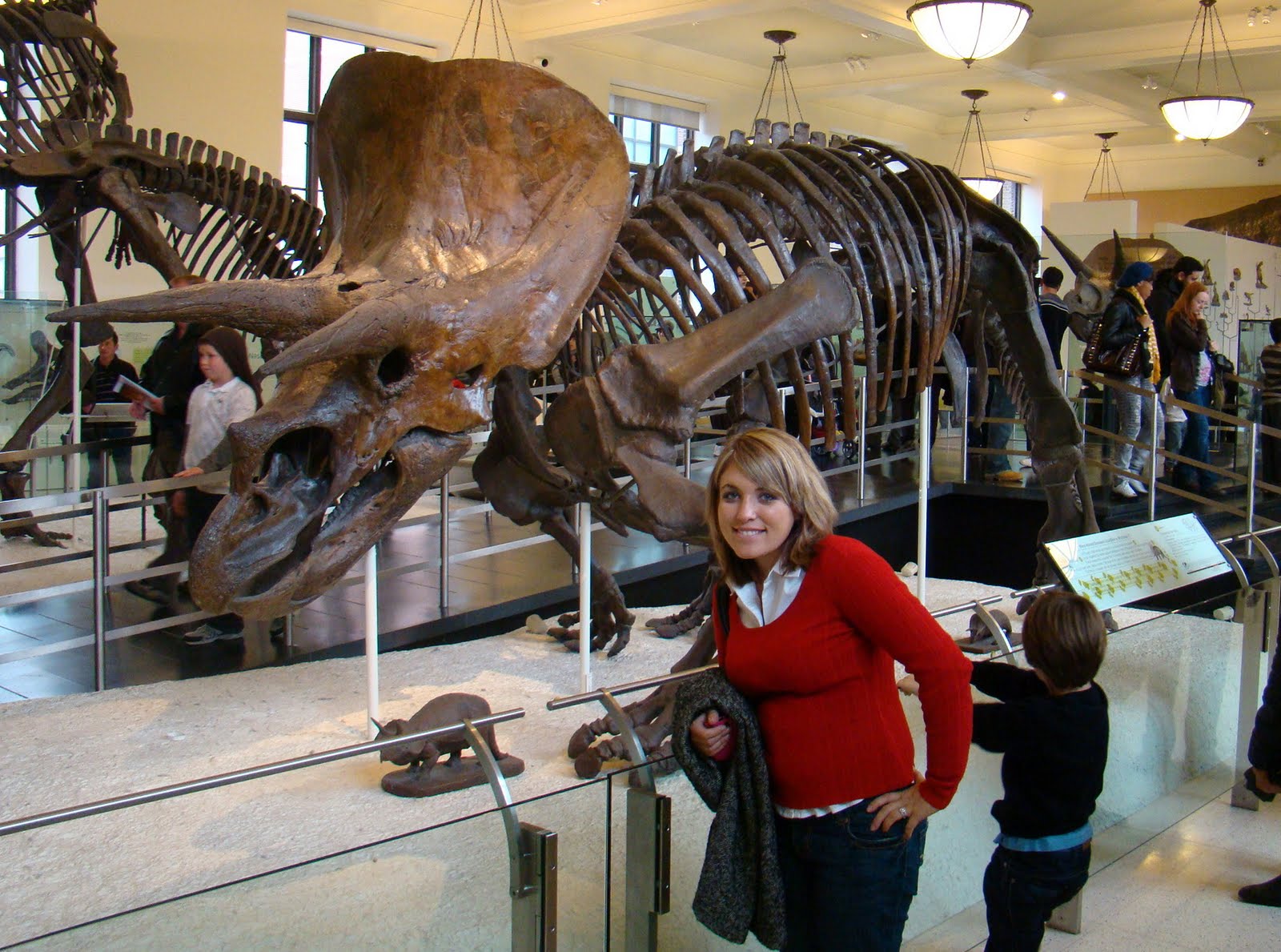 On the way back we attempted to ride the subway again but it was so screwed up we ended up getting off somewhere semi-close to the hotel and walking the rest of the way. I was so tired I could barely do it but we made it! I had to get this picture because it’s totally something you’d think you’d find in the subway 🙂 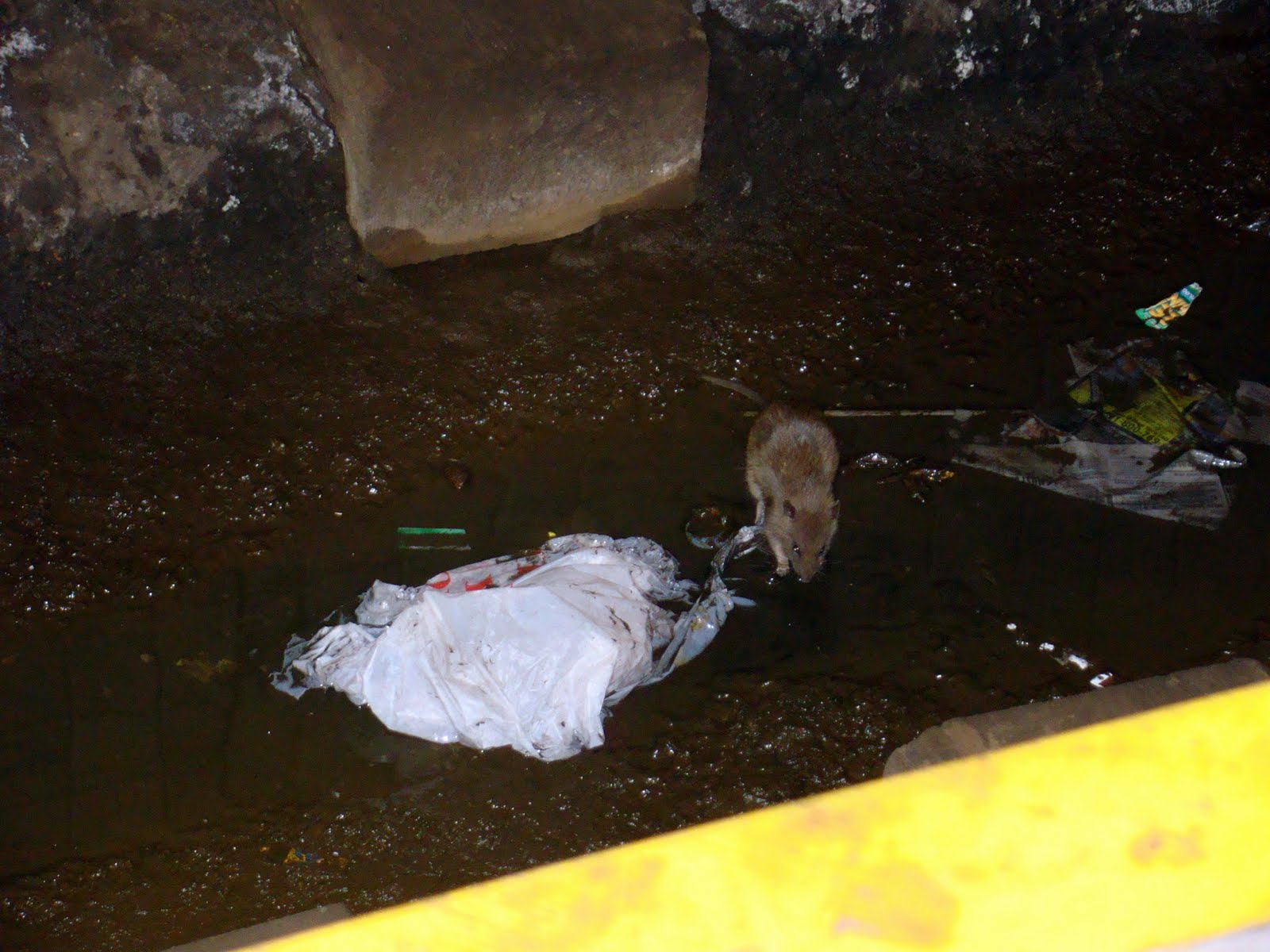 Before the farewell dinner President Clinton spoke. Zach and I are Republicans (really Zach is, I am not a very political person but I don’t like Obama so I guess I’m Republican haha) so Zach wasn’t very excited to hear Clinton but I was! I always heard how charismatic he is so I thought, if nothing else, he’d be a fun person to hear. I mean he’s also a former president so that’s pretty cool! Sadly though he totally disappointed! He looked SO OLD and acted like it too. He rambled on and on and on for an hour and never did make the three points he kept saying he was going to make. He did tell some great stories about some of his trips to third world countries and he is very smart. He spouted off all kinds of stats which was impressive! Overall though it sucked, especially compared to Huckabee! 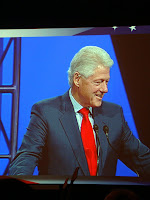 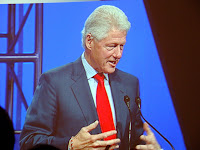 After dinner Foreigner played for us. It seems like every time a band plays at an Aflac event it’s not one from our generation. I can’t even tell you one song they sing! We stayed for a little bit just to be able to say we saw them then we headed to the room to pack everything up! 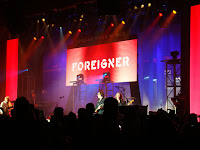 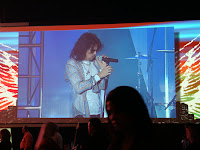 At all the meals on these trips Aflac gives away the centerpiece. Last year we got every single one which was pretty awesome! This year we weren’t as lucky. When we sat down at the farewell dinner we really wanted to win that centerpiece as it was a legit guitar!!! Sadly we didn’t win it but we did have several freebies to fit in our luggage on the way home. 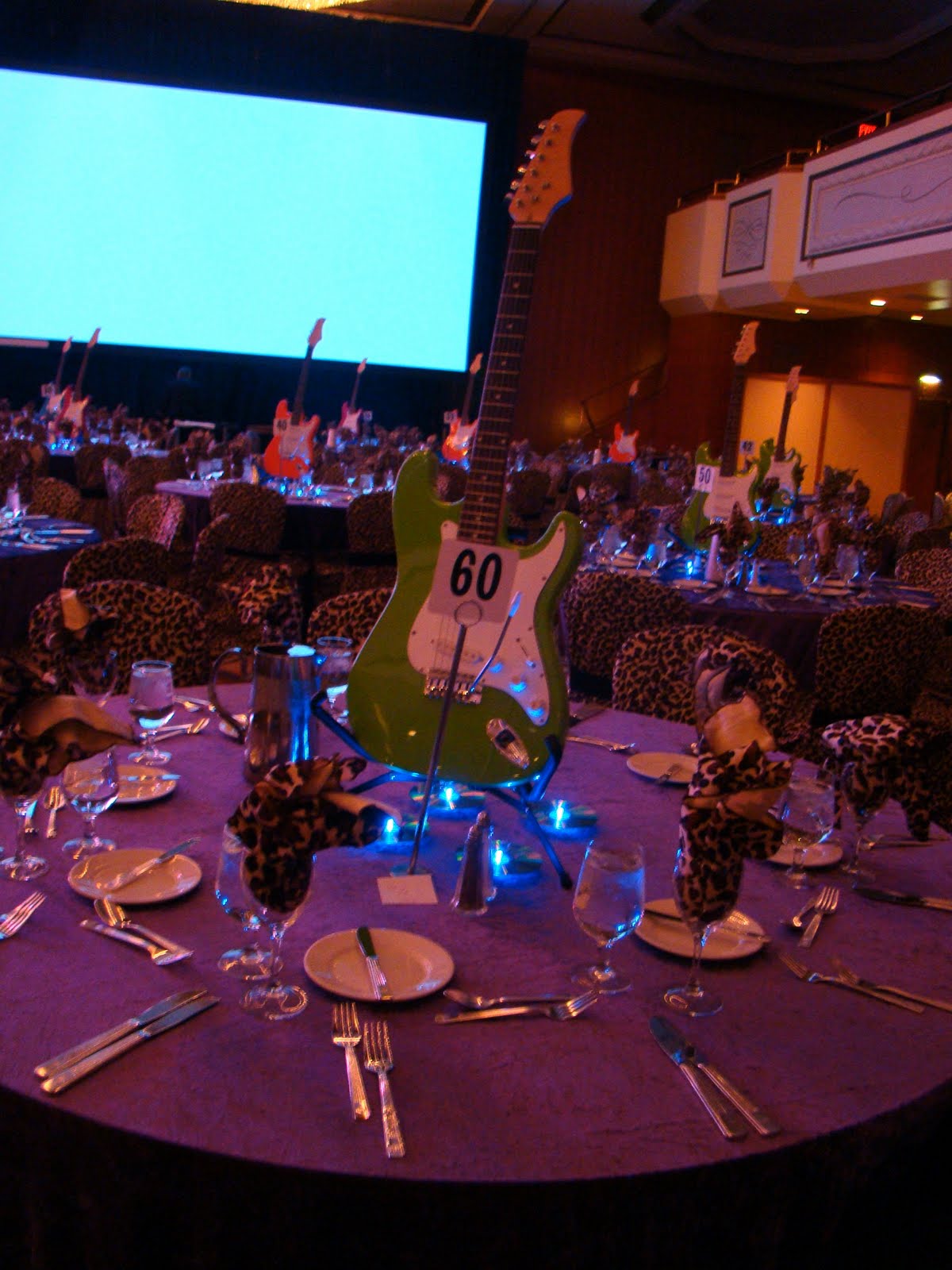 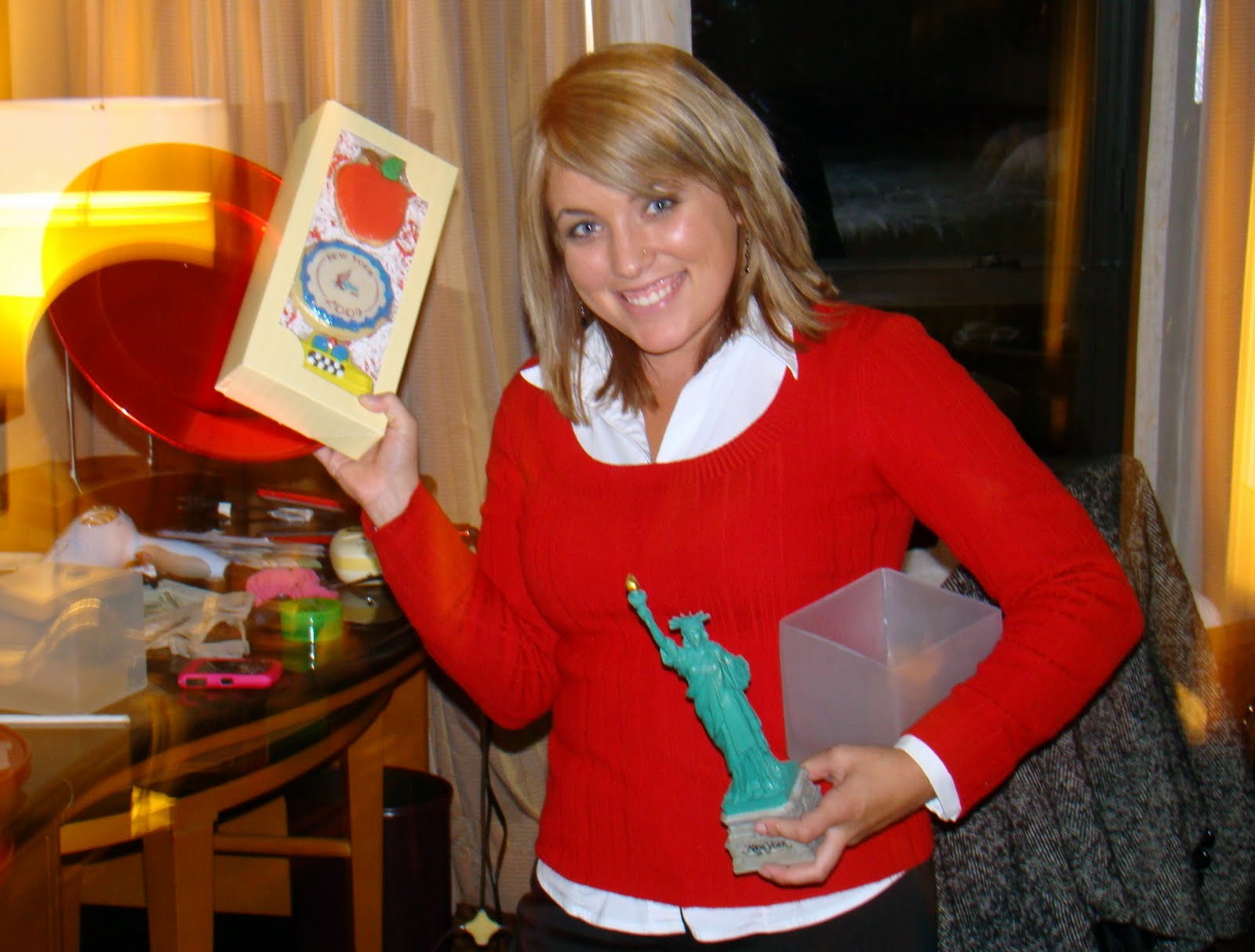 The flight home on Monday was MUCH better than the one on the way there (thankfully!). I was super eager to get home to see Kye. Like I told Zach, it’s a strange emotion being away from him. I miss him a lot but I didn’t wish I was at home and I didn’t wish he was with us. I was especially eager to get back to nursing him. I didn’t take as good of care of myself as I should have and I spread out my pumping sessions too far. I ended up getting a clogged milk duct which can lead to mastitis (and I don’t want that again!). We worked hard on Sunday to get rid of it by pumping frequently and using a HOT wash cloth on it and thankfully it was gone by the time I got home!

Mrs. Charlotte brought Kye to the house and was on the front porch holding him when we drove up. I jumped out of the car and raced up to see him. It was precious he didn’t laugh or anything he was very serious and just SO loving. He did our little head thing from Cancun like a thousand times, even to Zach! He was so cuddly and sweet and I was just so happy to hold him in my arms again. I’m so so so glad we took him to Cancun because after 5 days of being without him while in NYC I know I couldn’t have done both trips and if they do trips that close together again and we can’t manage a way to take Kye then I probably will just have to pick one. Don’t get me wrong, I had a wonderful time with my husband and such a fun trip but we are a family and I think we should be together as much as we can be! I was happy to be home and even happier that Kye had held off on the crawling 🙂