Day one of our New York City trip started with a bang! Mike Huckabee spoke at this year’s Aflac Memorial Prayer Breakfast. He’s the former Arkansas Governor and has a show on Fox News as well as a radio show on ABC Radio Network. He briefly ran for president and now, after hearing him at the trip, he’ll have my vote if he runs again!!! He was an AWESOME speaker and it was so nice to hear such a public figure talk about his Christianity and the importance of Jesus in his life. 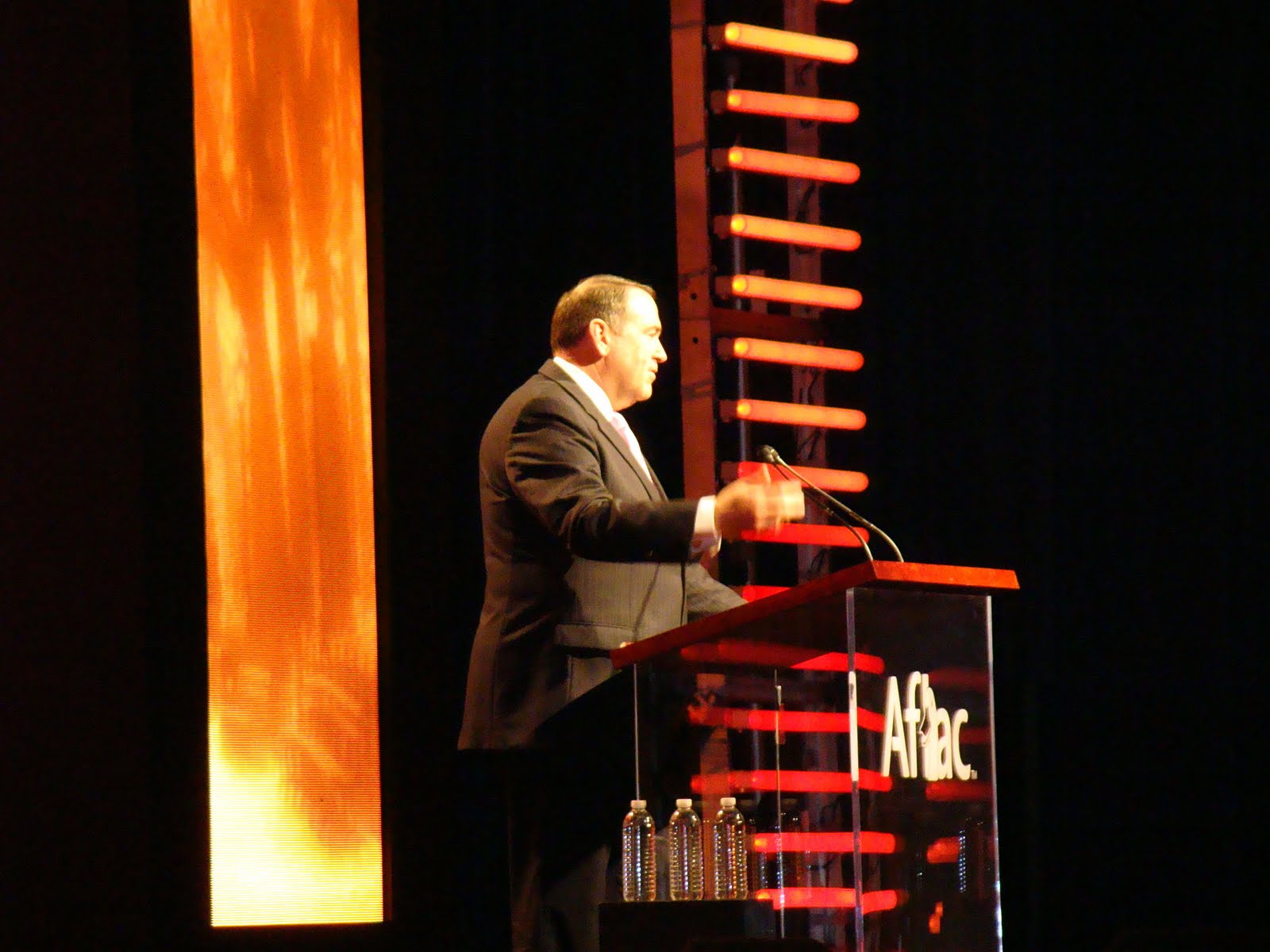 He told a great story about his son and when his son baked a cake he had wonderful intentions and followed the recipe exactly but when it said “dash of salt” it was hard for him to decide what a “dash” meant so he used an entire cup! The cake was ruined even though he had tried so hard. That really relates to our Christian walk as we may have the best intentions but if we don’t follow God’s exact word then we’ll be in trouble! He also talked about living in the world yet not being of the world and how people tell him he shouldn’t be in politics but that all of us SHOULD be involved in those areas of the world because it’s where Jesus would be and where He needs us to be the most! It was such a powerful lesson and it makes me so proud that Zach is part of a company that puts the emphasis on God! 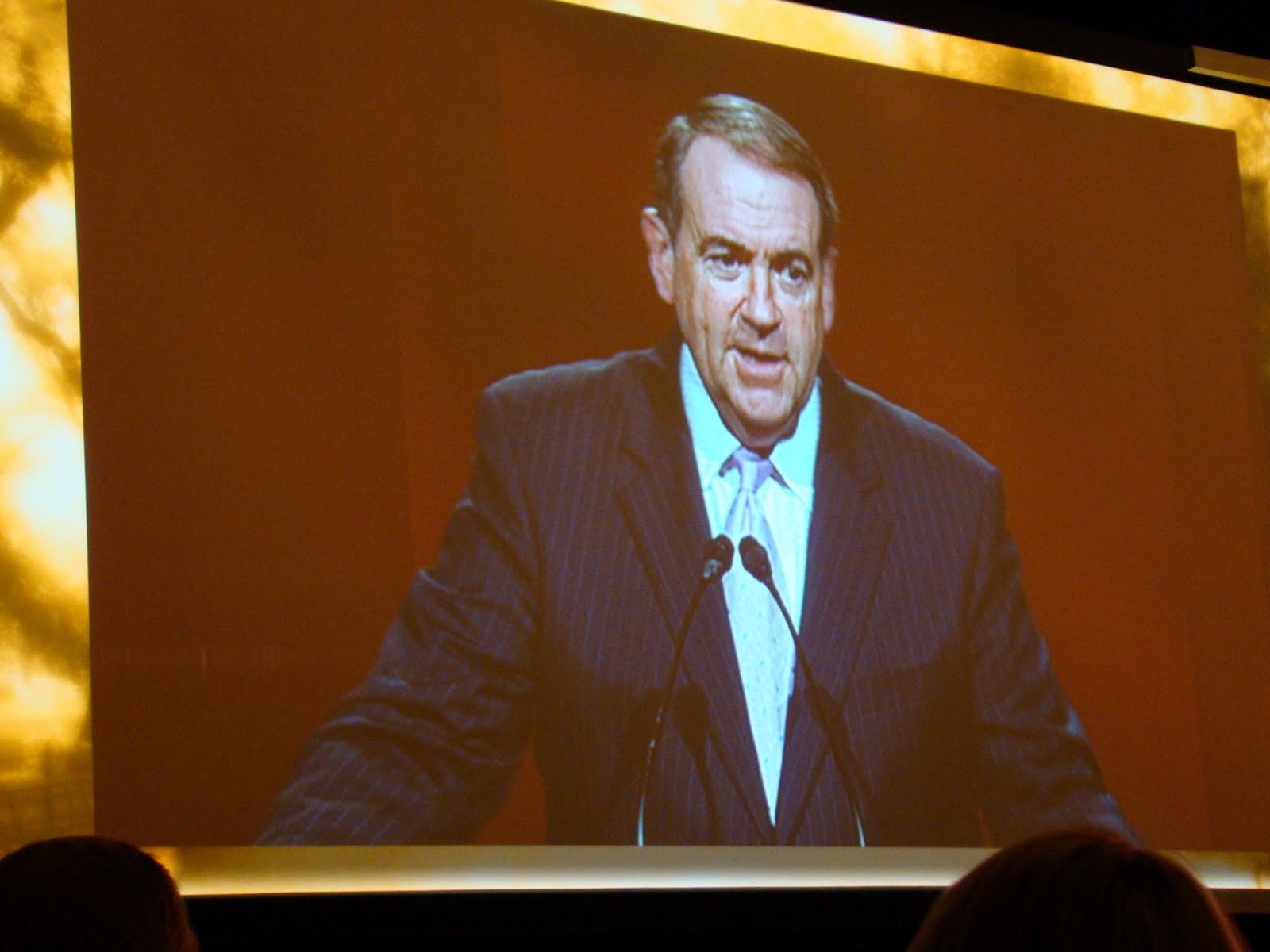 After the breakfast (and my second pump session for the day) we hit the road! Before we left we had mapped out our schedule and google mapped it so we could see the fastest way to get to each destination and if we were to ride the subway which one to take. It made the day a LOT smoother for sure! Since it was a 100% chance of rain we were nervous about our chances of being able to walk the Brooklyn Bridge but when we left the hotel it was overcast and cold but not raining so we thought we’d try it! 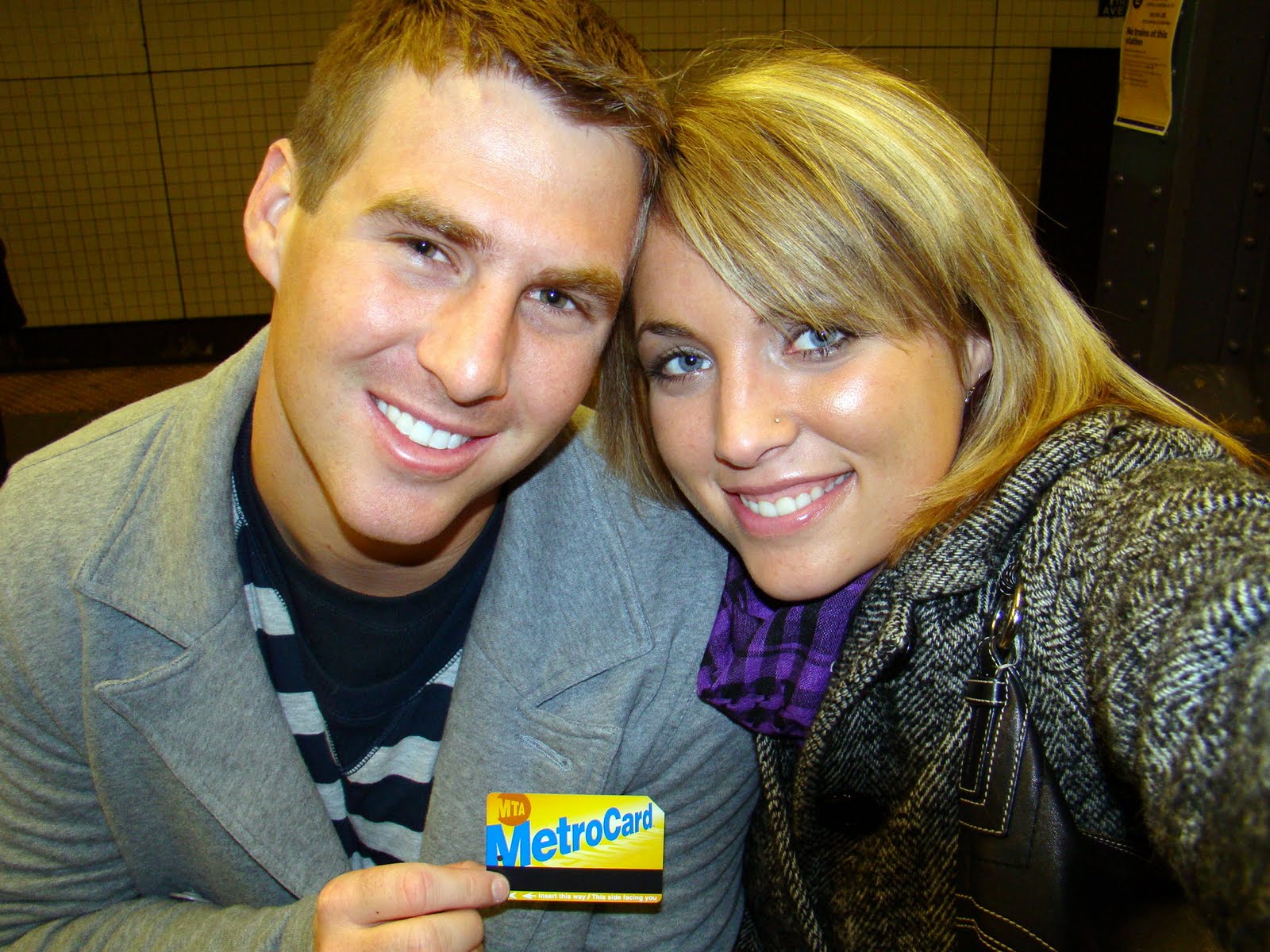 We took the subway to Brooklyn and our directions got a little iffy there. We had a pretty hard time finding our first destination which creeped me out a little bit because in all the songs you hear about Brooklyn and how “hard core” it is haha! Luckily we found where we wanted to be and got sooo lucky! We wanted to eat some REAL New York Pizza and I researched the BEST and it’s at a little place under the Brooklyn Bridge called Grimaldi’s. Everything I read said we’d find it by the looooonnnngg line out front but guess what? I think the weather helped us out because we walked right in no problem! 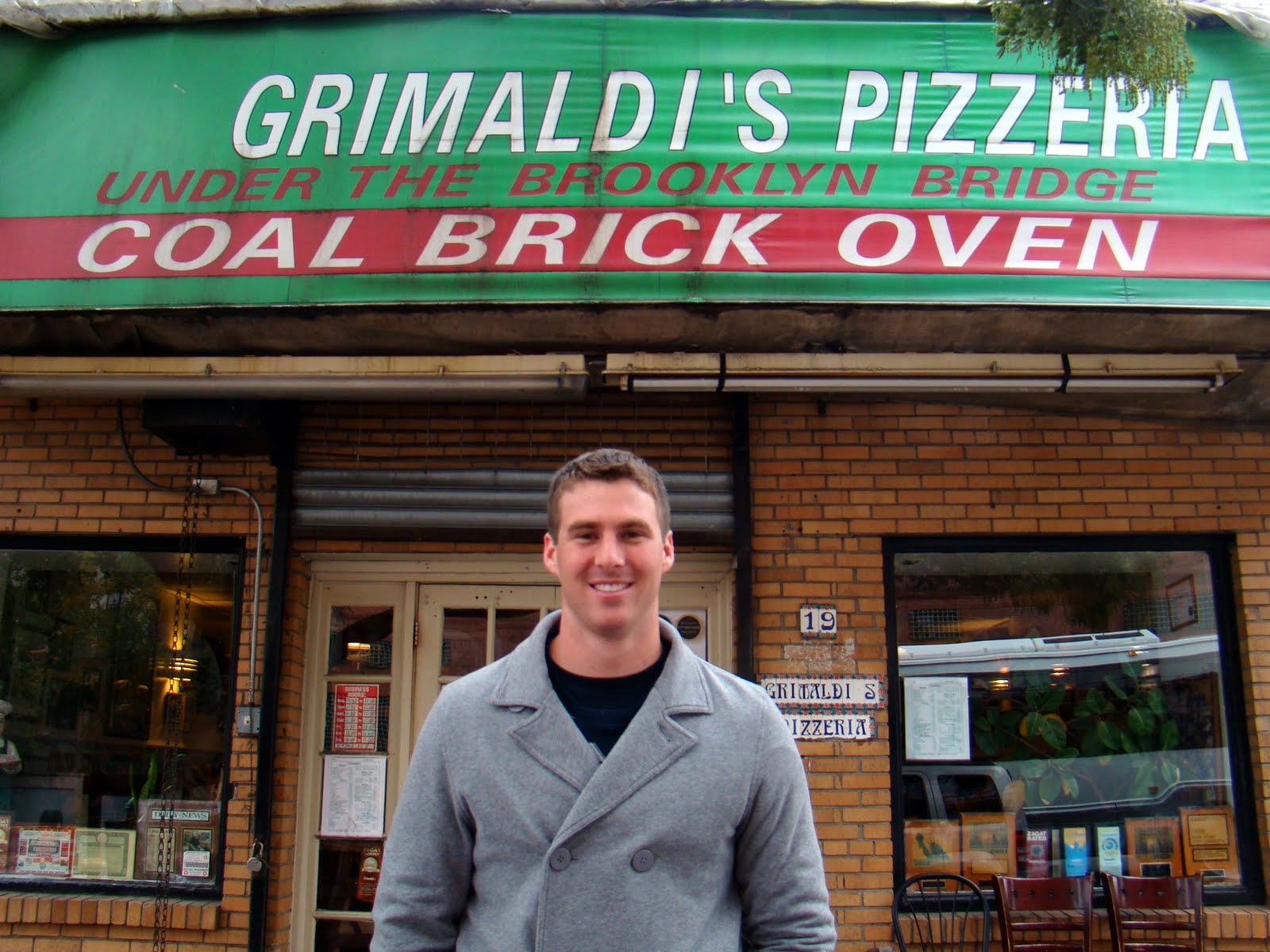 It was a crowded tiny hole in the wall and we actually were seated at the same table as a bunch of other people (turned out they were SUPER nice from Utah and we ran into them again while on the trip haha!). We love little places like that and we were pretty excited to see how the food would be. One of our favorite things on trips is finding awesome places to eat that aren’t the most common places everyone else knows about (although I always find them all on tripadvisor.com so I guess other people do know about them haha). And this place didn’t disappoint! The pizza was HUGE and not that expensive and it’s made from scratch at the restaurant. It was SO good, especially b/c the pepperonis haha! 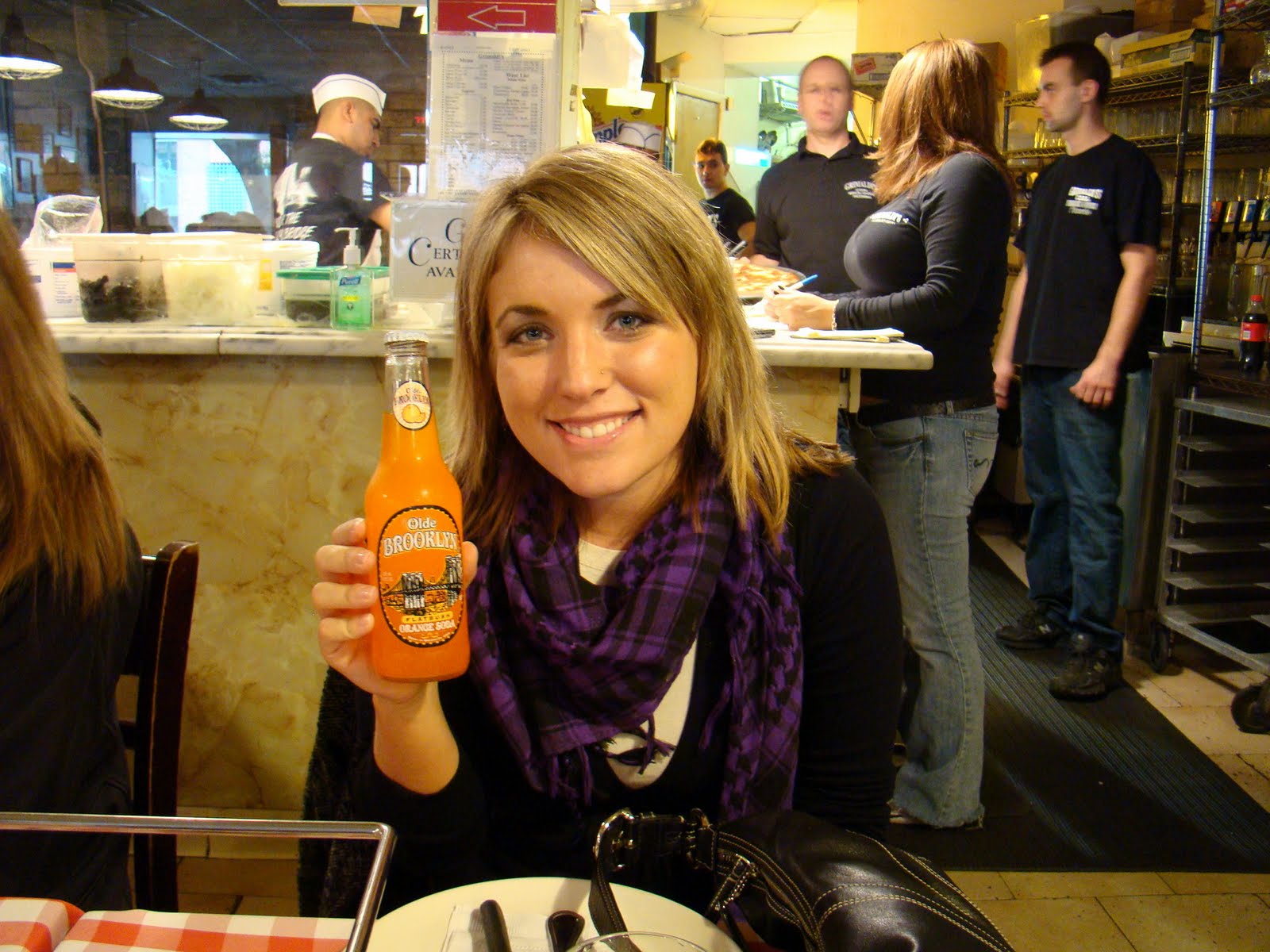 Our table buddies took this for us! 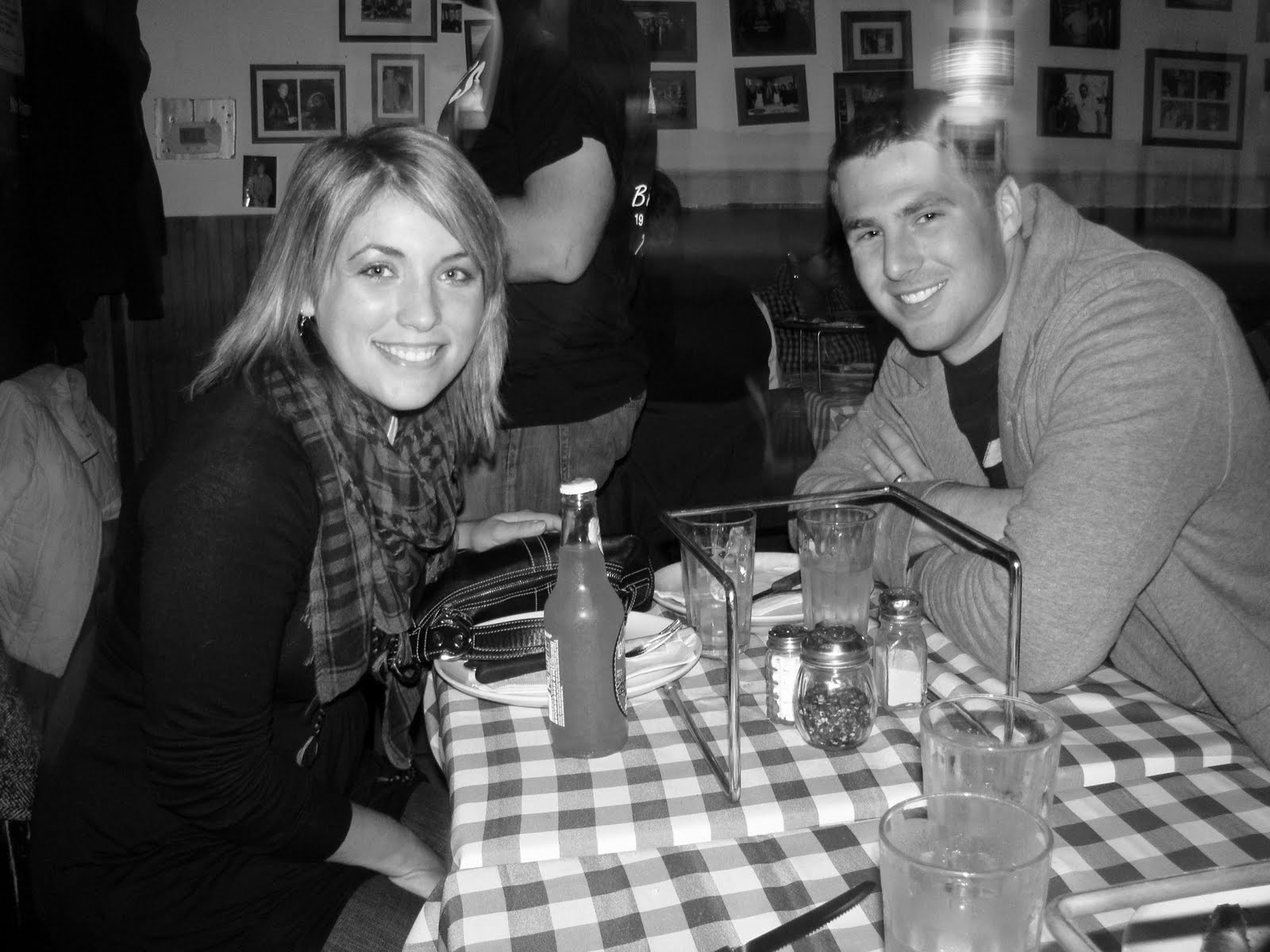 I usually only eat 2 pieces of pizza but this was so good…I ate FOUR! We finished this junk! 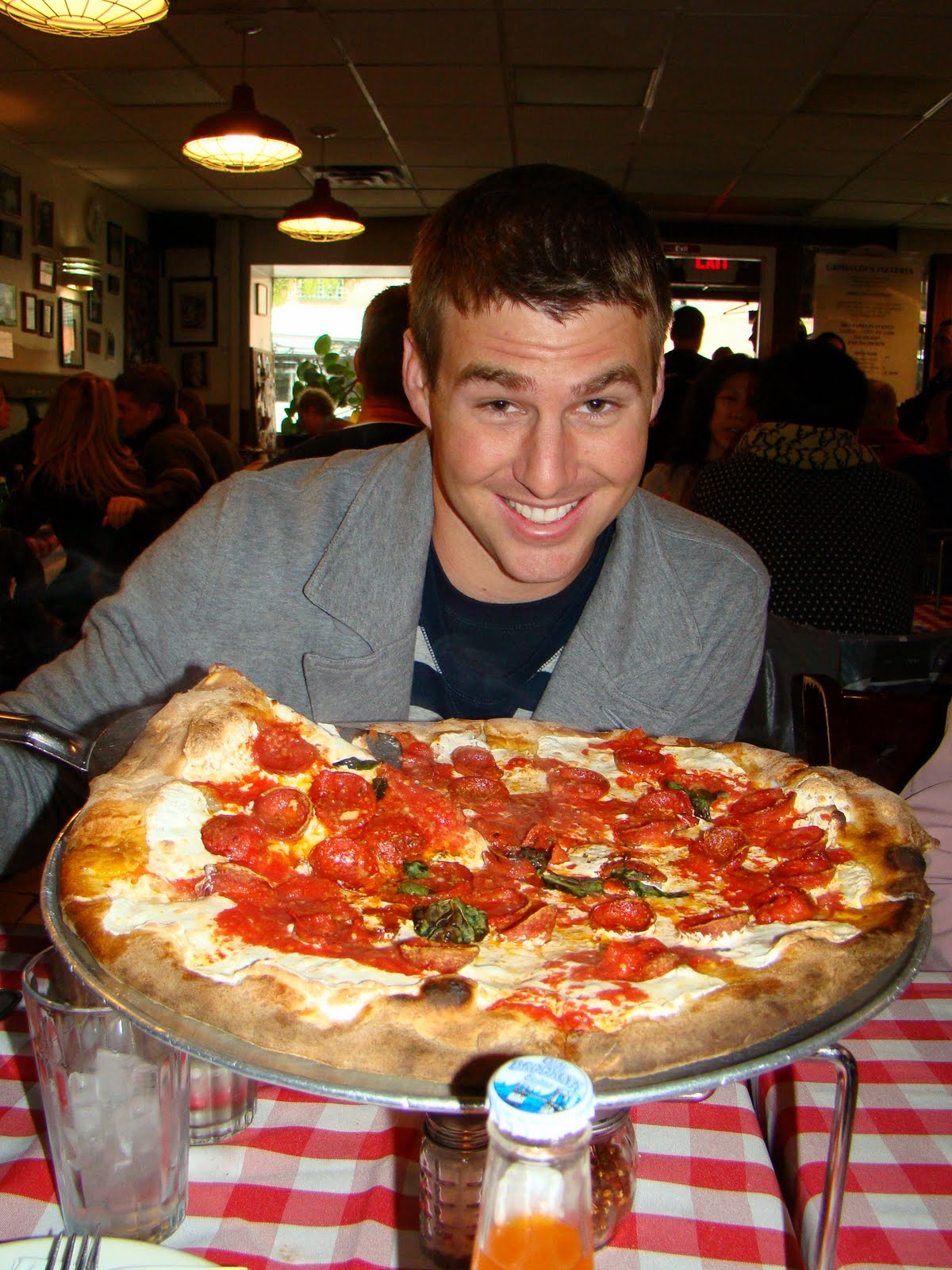 SO cool watching them make it 🙂 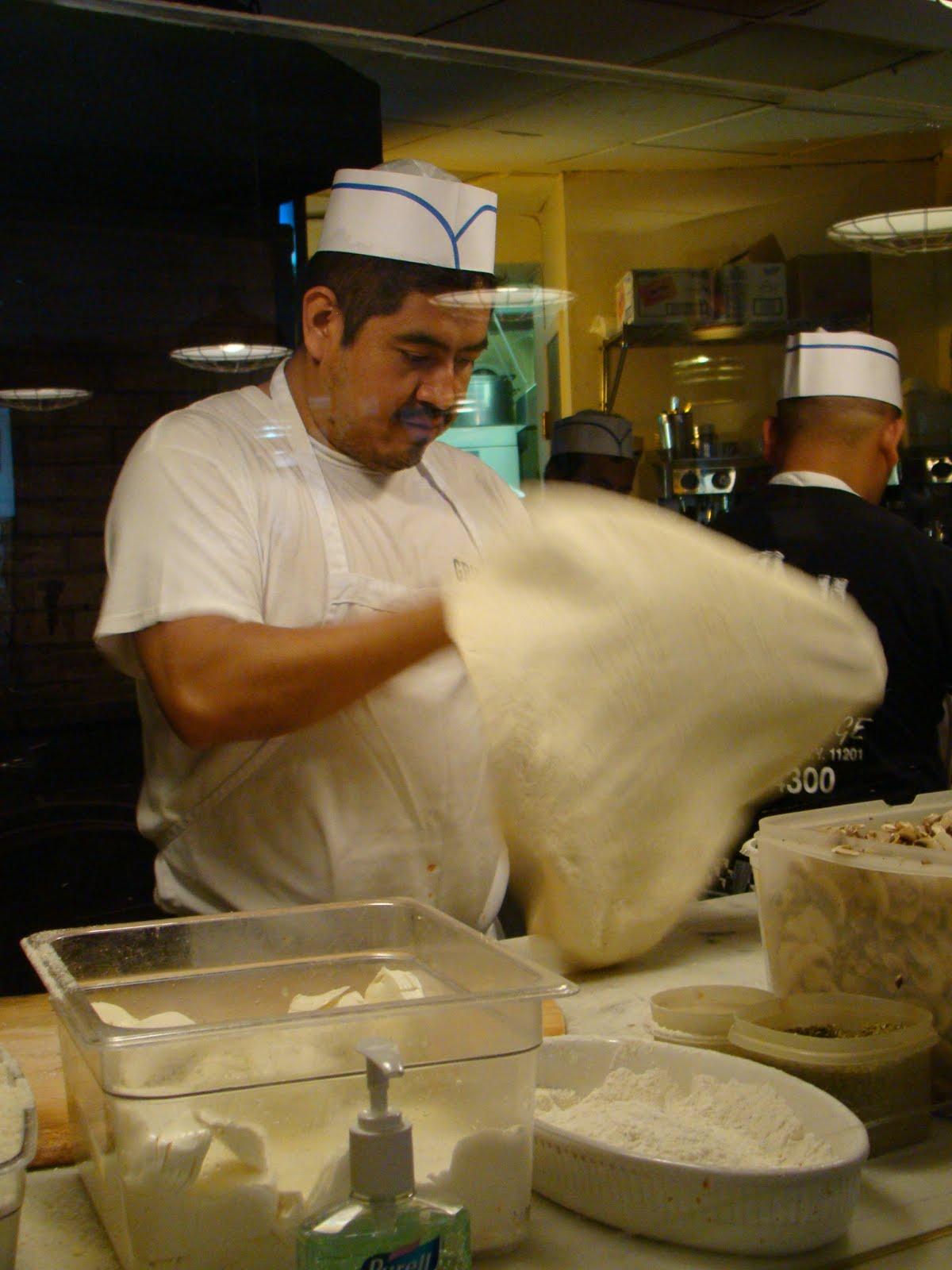 Afterward, even though it was 40 degrees outside, we went over to get some world famous ice cream. Frommers  rated it as the best ice cream in America and since ice cream is my favorite thing ever we had to check it out! And again, it was amazing! What was funny is that both the pizza place and the ice cream place were cash only…totally for tax reasons haha. 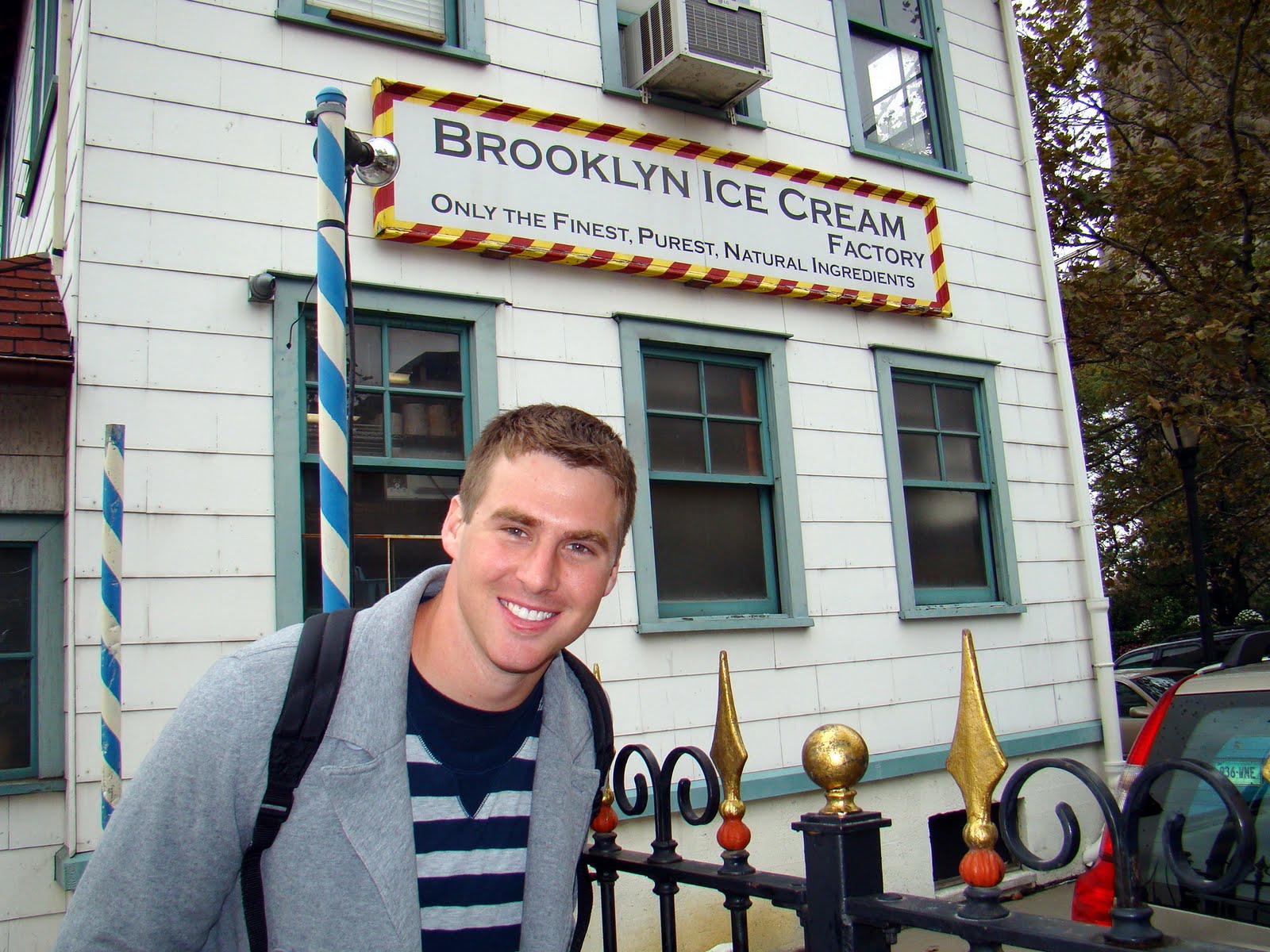 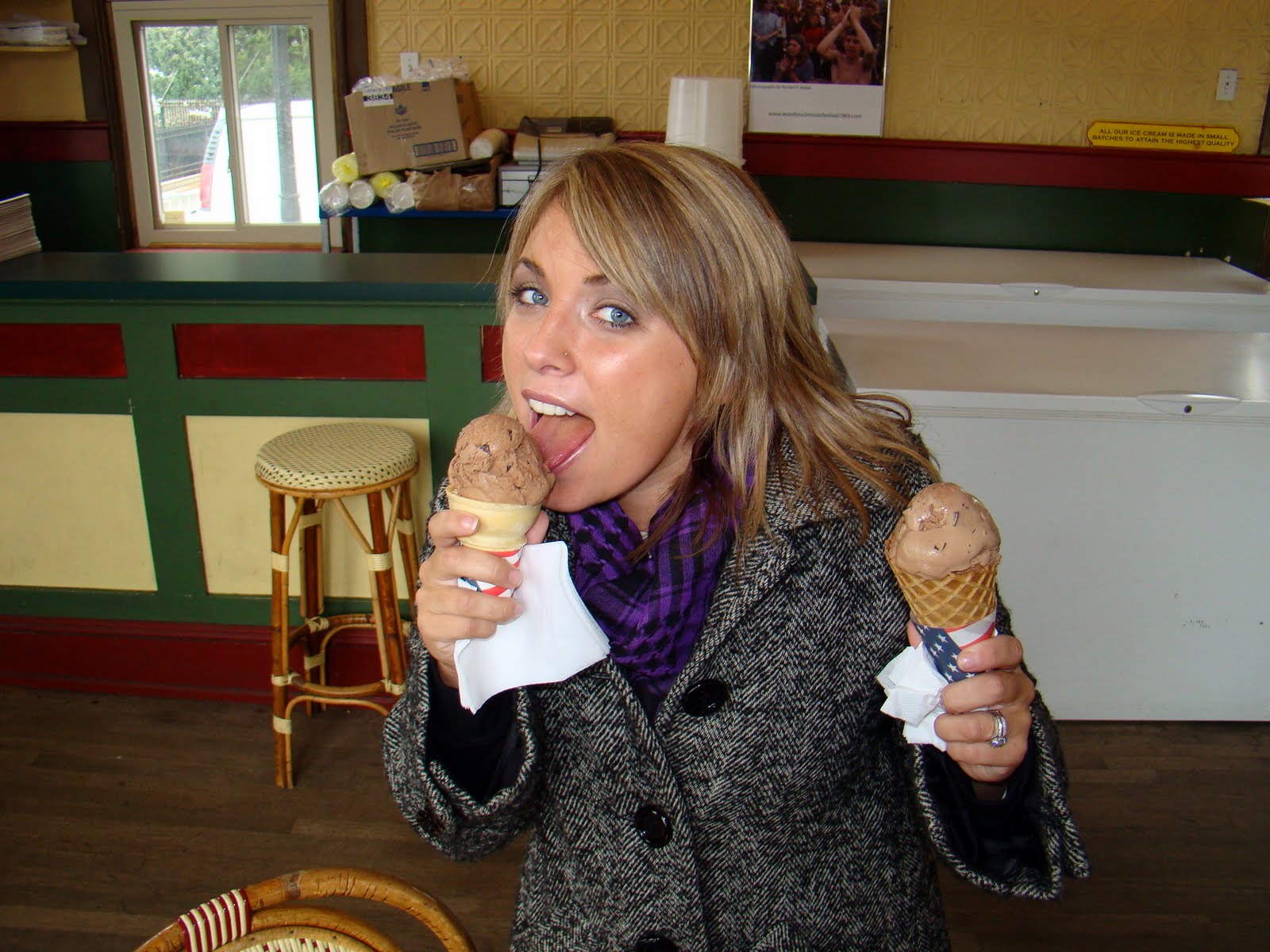 A view of the Brooklyn Bridge! 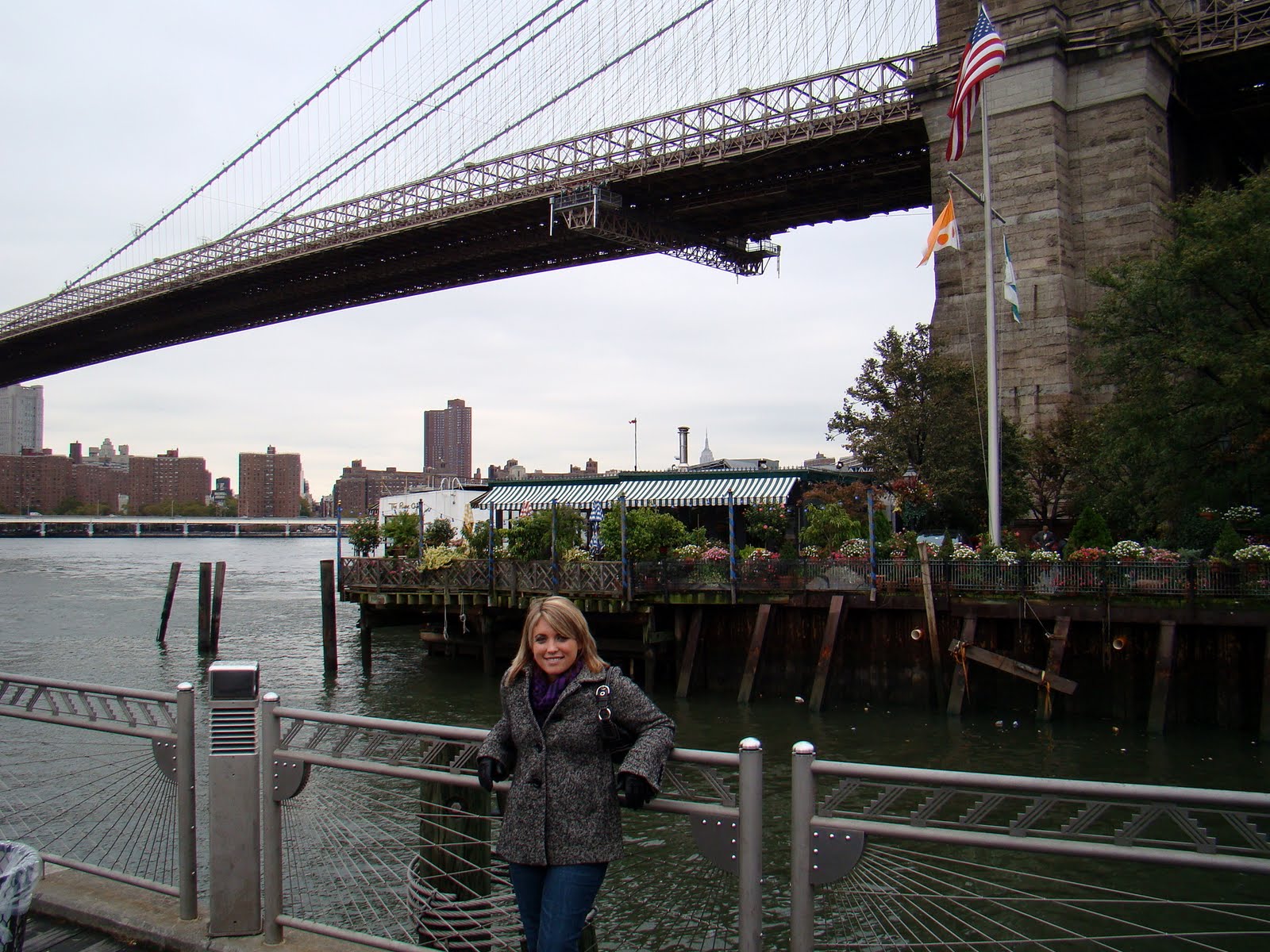 After filling up on some mega food (and equally mega calories) we burned it off with the loooong walk over the bridge! It was a really neat experience and I never knew that the bridge you walked on was actually wood planks and that the walking area was above the cars! Yikes! Also don’t walk on the bike path or the bikers will about murder you, no joke.

Getting ready for the hike! 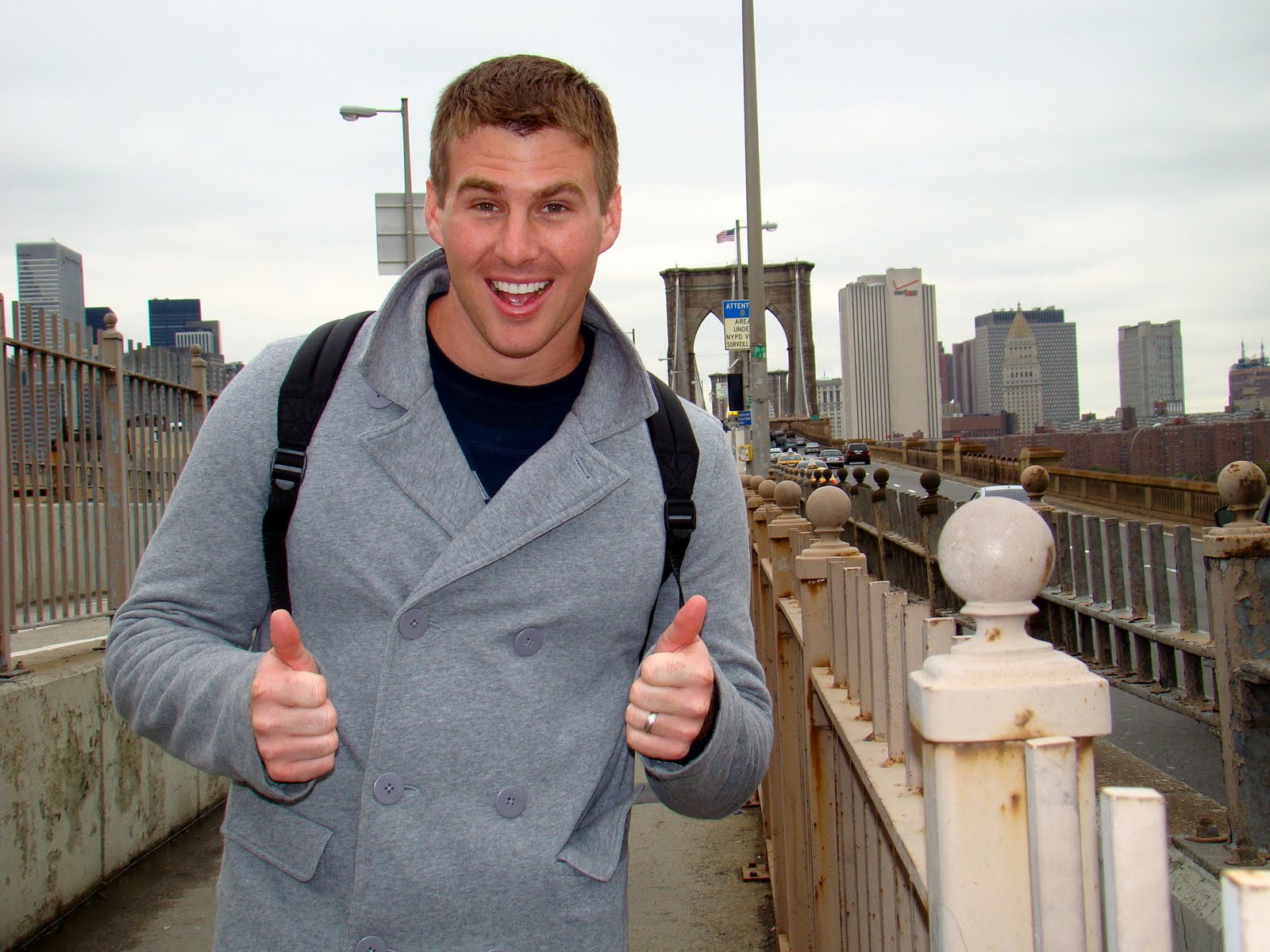 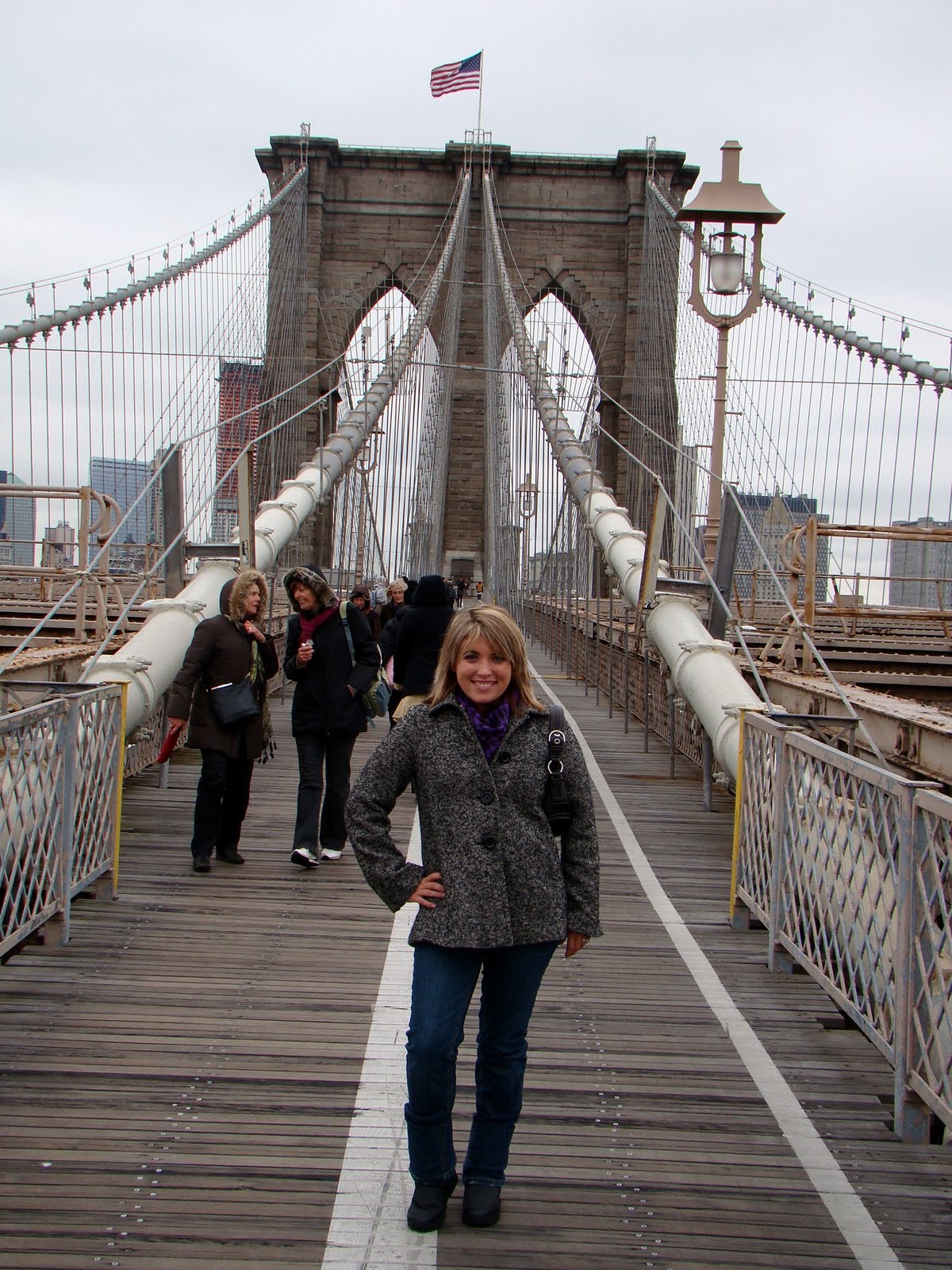 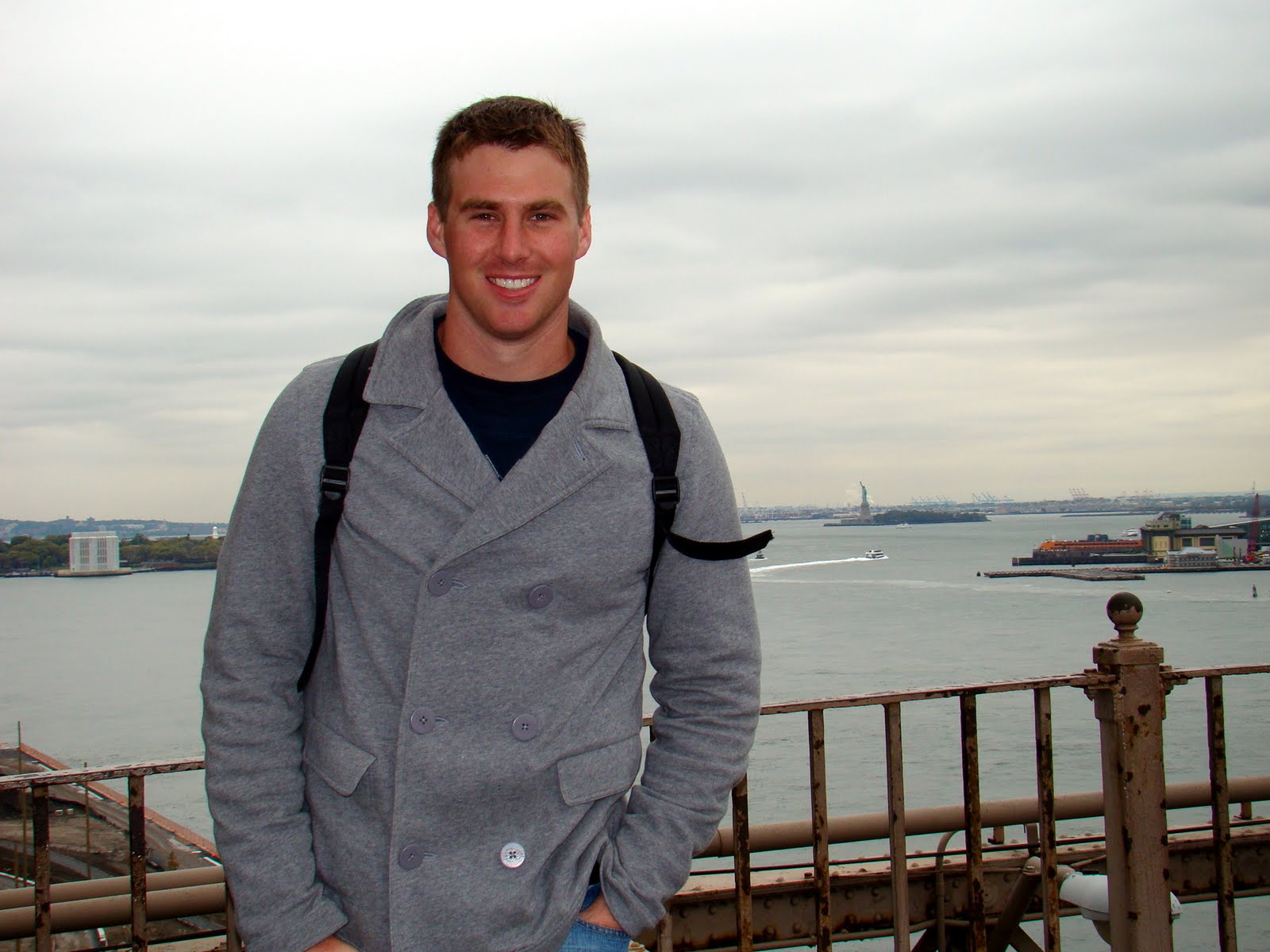 After the walk we rewarded ourselves with some shopping. We went to Century 21 (a huge department store) but it was just too packed. The deals were great but we both get annoyed with trying to shop surrounded by a million people pushing and shoving so we gave up. I was a little frustrated but it was time to go to Chinatown! If you ever go to NYC go to Canal St in between Layfette and Spring St for the best stuff 🙂

On our way to Canal St a lady was on the subway who, I guess, smelled like straight up PEE! Since I can’t smell I was worried people would think it was me since I was acting fine so I copied Zach and looked like this the whole ride too haha 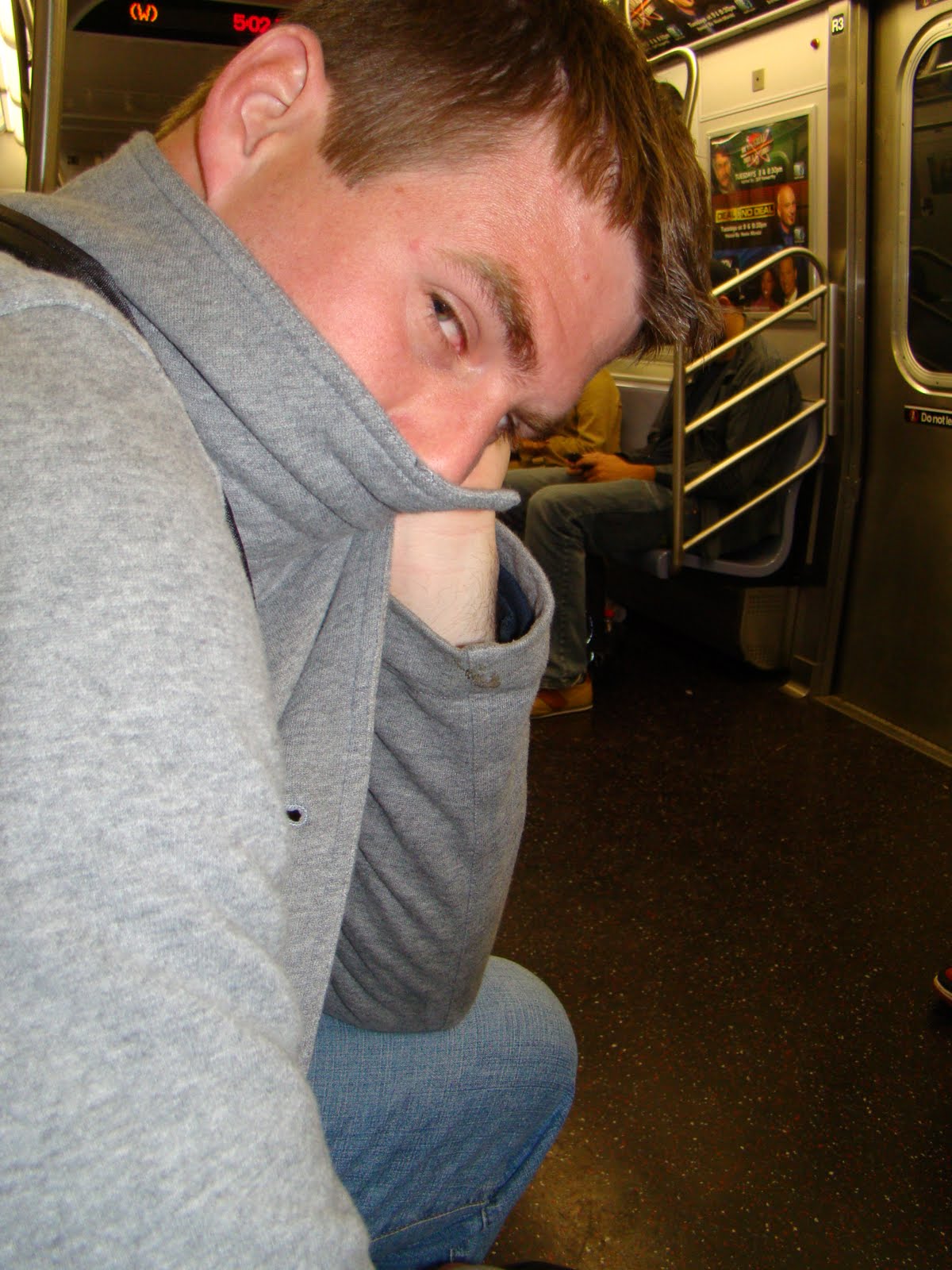 We went to Canal St when we went to NYC for 24 hours as part of our honeymoon and we’d gotten some great deals in the “secret rooms.” So we were excited to do it again! I guess the law has really cracked down on the rip-offs so the dealers were much more secretive. We would just whisper to them “Coach?” and sometimes people would have some. Instead of having secret rooms they had secret cabinets that they opened and instead of letting you look they were SO quick.  Zach must have been accused of being a cop like 10 times. They are really panicky now but we were still able to get good deals! I got 3 “Coach” purses and a “Coach” scarf. Paid about $30 per purse and $10 for the scarf! Zach got a “Coach” briefcase for the same price and some knock-off sunglasses! 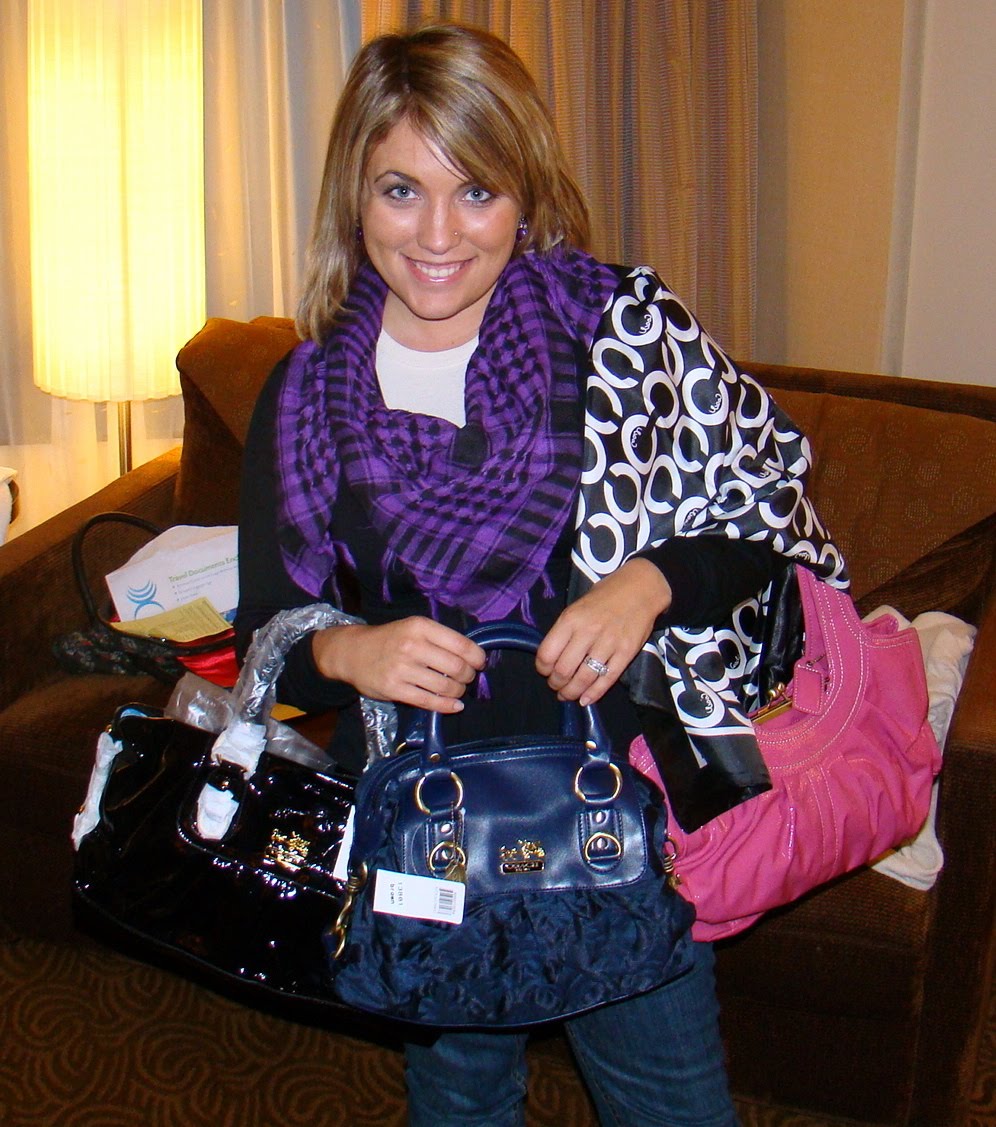 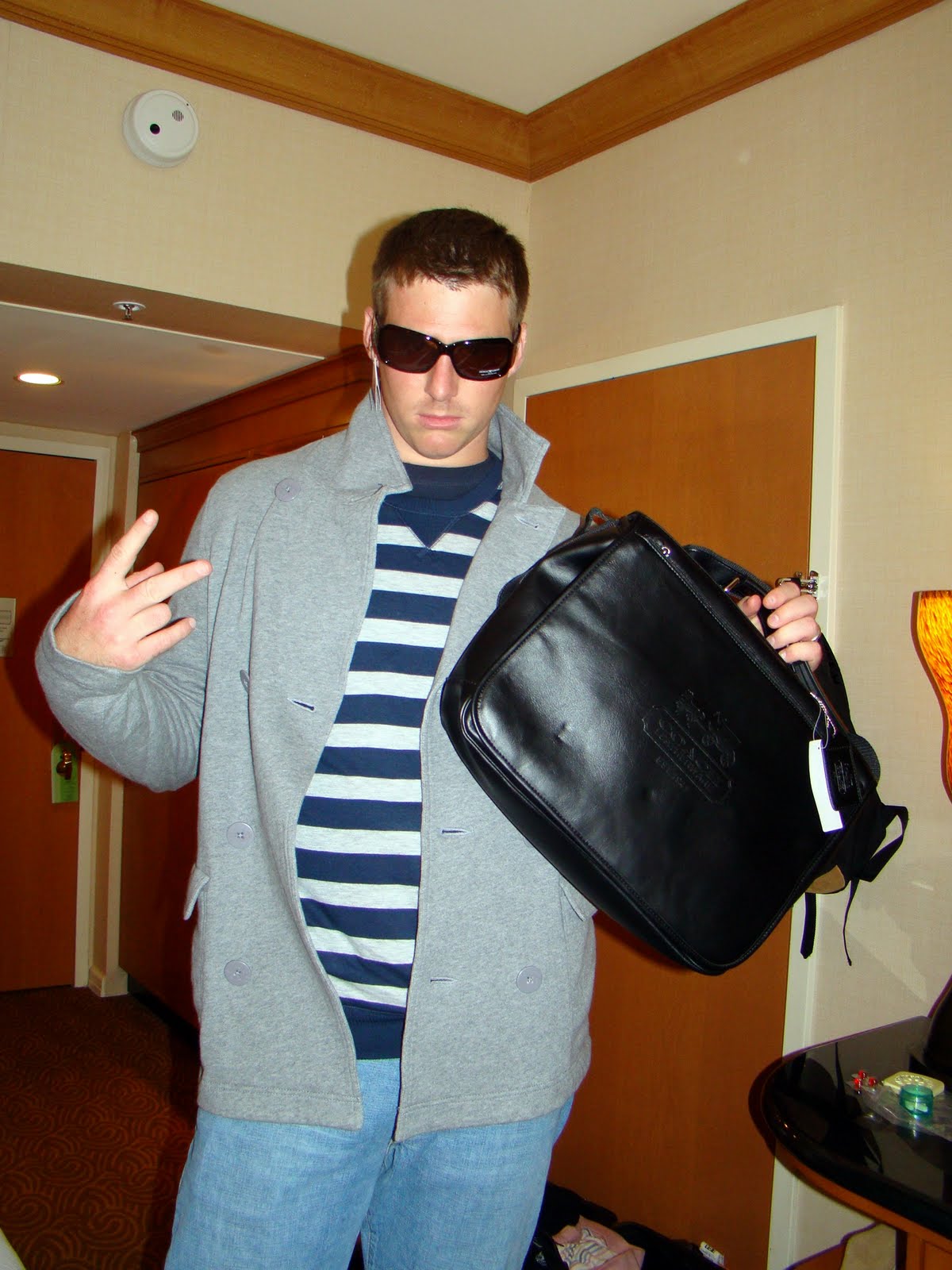 That night we went to see Phantom of the Opera. We got ready (I pumped!) and headed out early so we could walk there and get some dinner on the way. It was so cold and my feet hurt so badly that I ended up wearing my tennis shoes with dress pants! haha! I don’t think anyone noticed though! On the way we stopped at our first hot dog stand and Zach got a real deal hot dog and I ate this nasty pretzel. 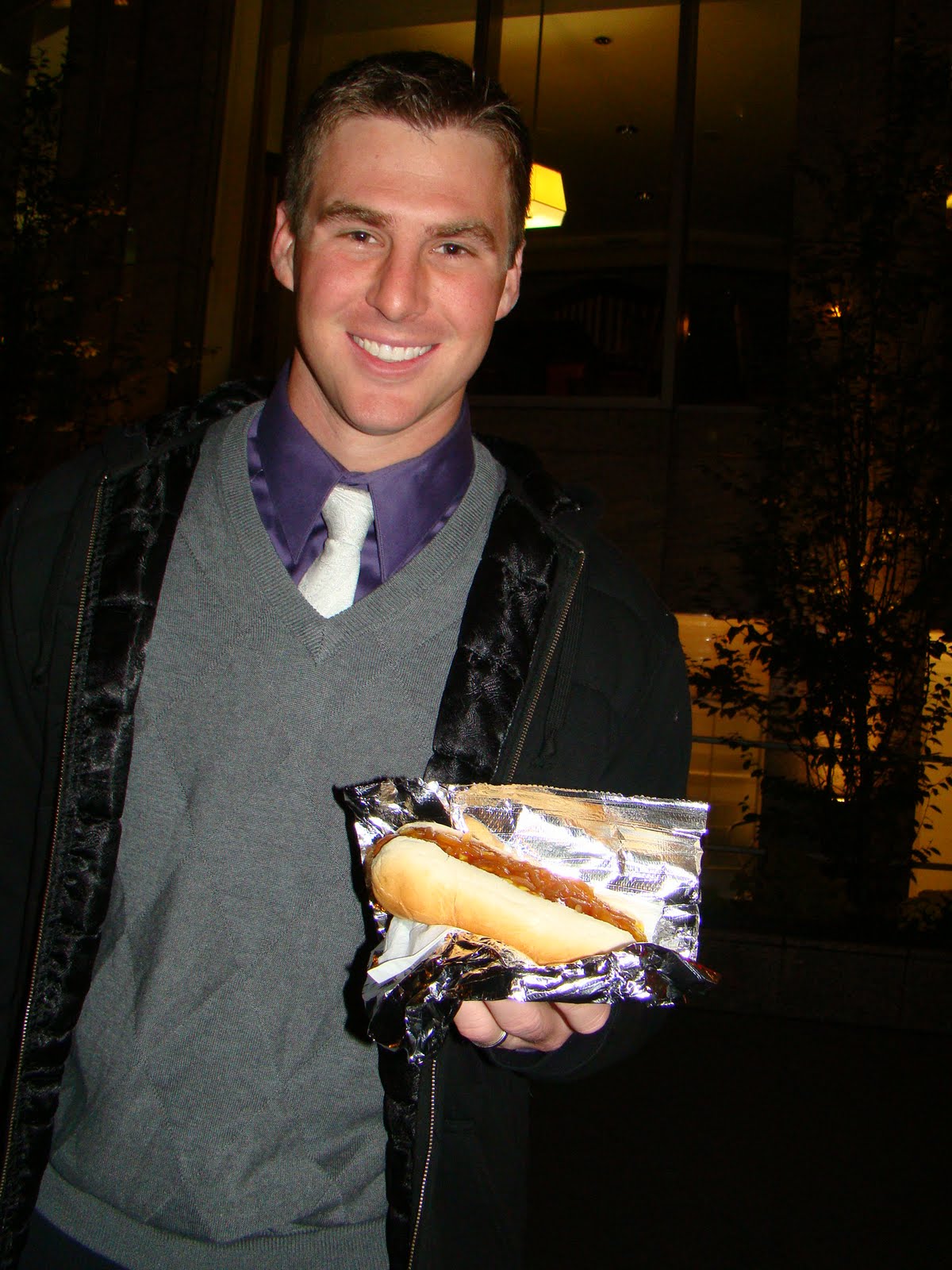 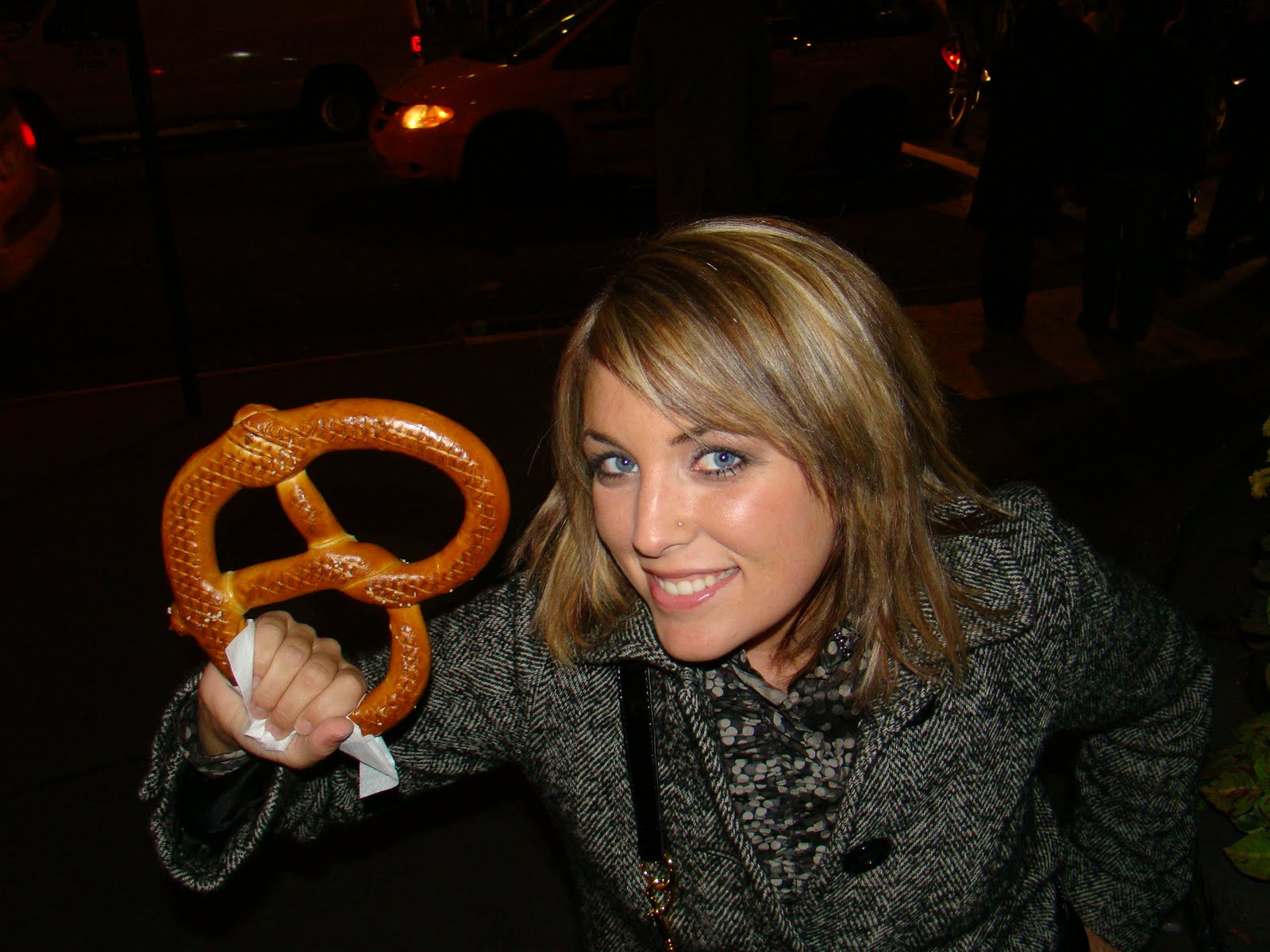 We got to the show plenty early and had a good time talking to more people from Utah while in line waiting to get in. We got our new tickets from the Will Call booth and it was a very easy process! 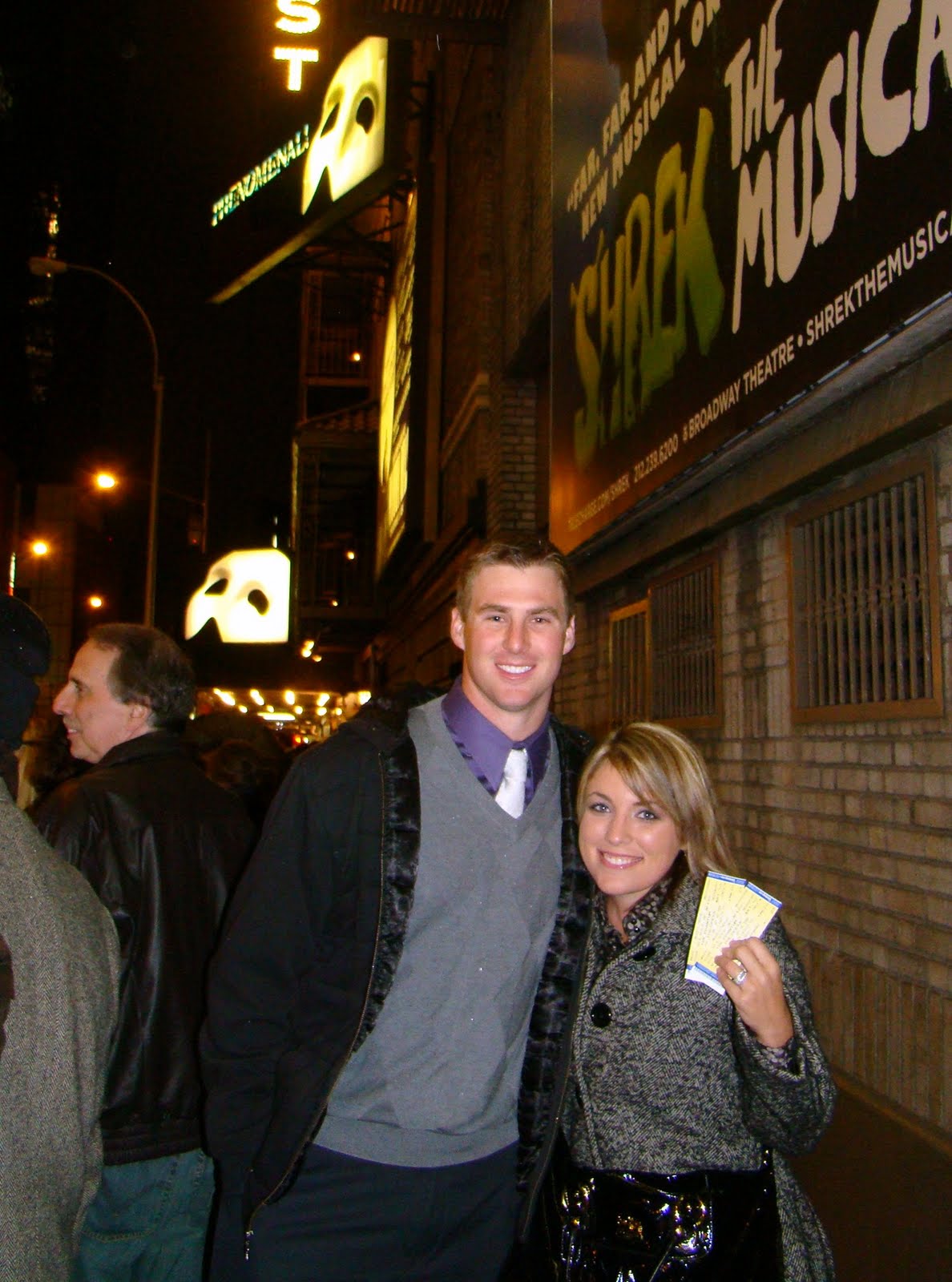 We were both a little nervous since we paid $40 extra and had to get new seats. But when we got in we lucked OUT! We were in the top mezzanine and had the front row! It was perfect as we were right against the ledge of the balcony so no one could sit in front of us and we were right on the end of the row so Zach had plenty of leg room. These were the best seats I can remember ever having as I could actually see faces (I’m pretty blind haha) Things always work out 🙂 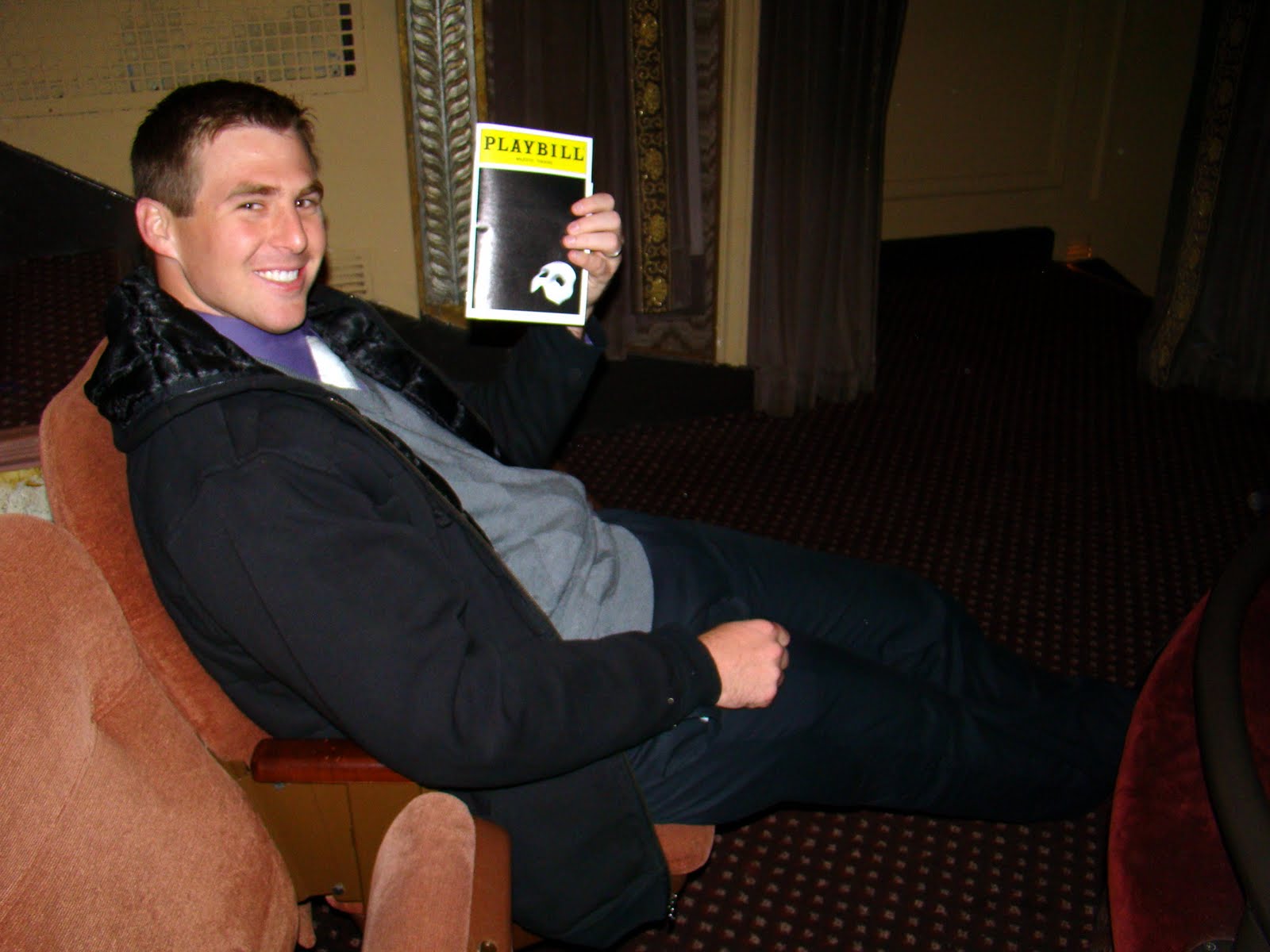 Neither of us have ever heard the Phantom story before so we were excited to watch the show. It’s the longest running play on Broadway (22 or 23 years in the same theater, the Majestic). It was so awesome! A great story and incredible special effects. All musicals tend to get a little boring at parts (why do they make the songs sooo long?!) but it was very action-packed and we loved it.  We especially loved that it is based in Paris at the Opera House right next to where we stayed when we were there! The stage was even decorated to look like it. So cool! 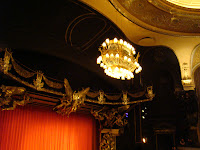 We walked back through Times Square which, to me, isn’t that big of a deal. It’s just a bunch of well lit buildings but it is neat that the city has designated little courtyards for people to sit and such instead of it being so busy with so much traffic. Some girl asked me to take a picture of her and her boyfriend (I guess I didn’t look like I’d steal the camera) so she did the same for us! I’ll never pass up a chance for a picture 🙂 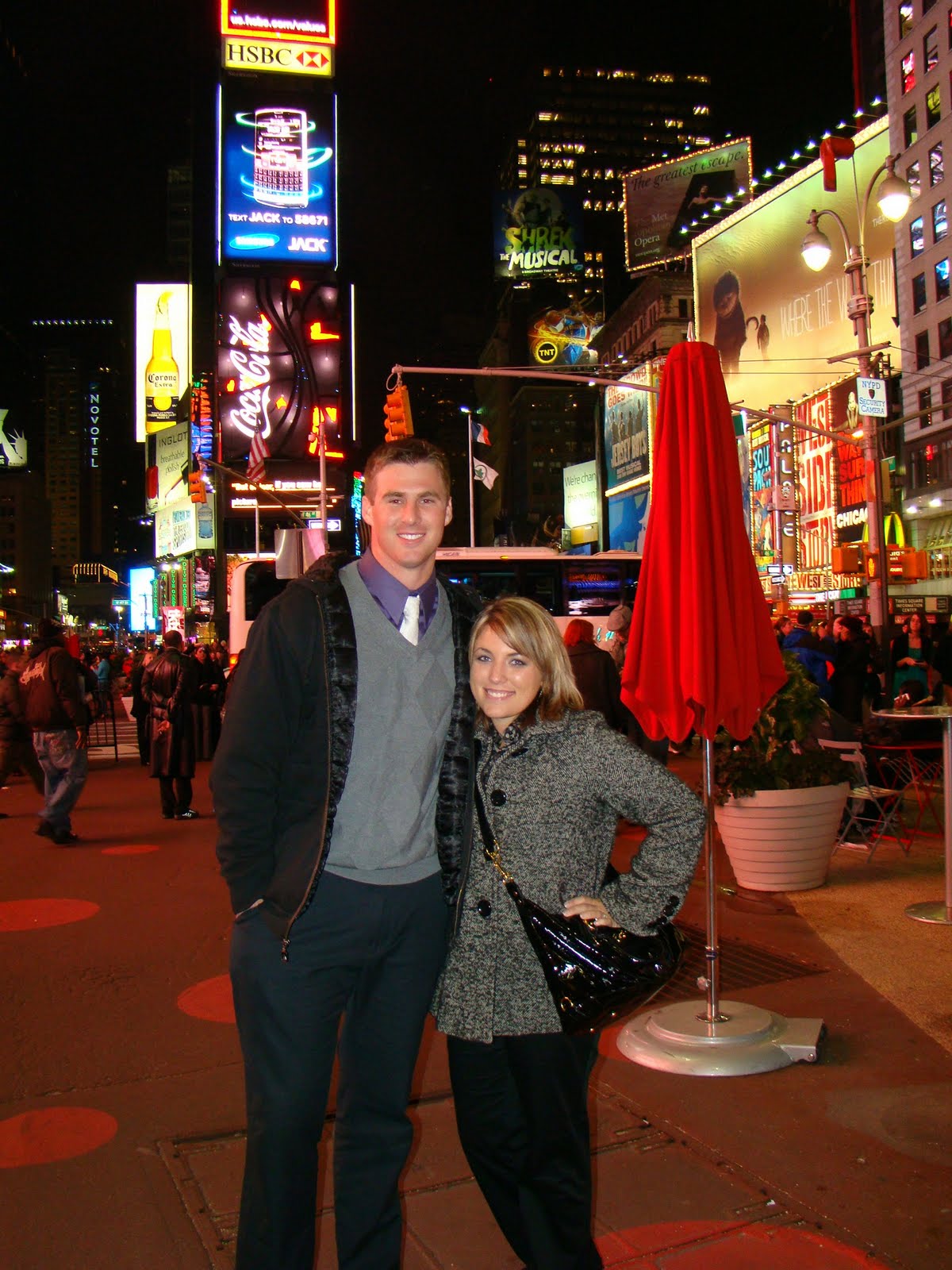 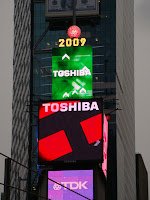 Once we finally got back to the hotel we were both so tired and SO hungry. While I pumped Zach went back out to the street and waited in a loooooong line for some rice dish. People were telling him that it was the best food cart thing in town and well worth the wait. He, of course, got hit on in the line and they were a couple girls who couldn’t believe he was married with a baby haha. We pigged out on the meal (which I remember as being awesome but it’s probably just because we were starving) then headed to bed for another busy day the next day! 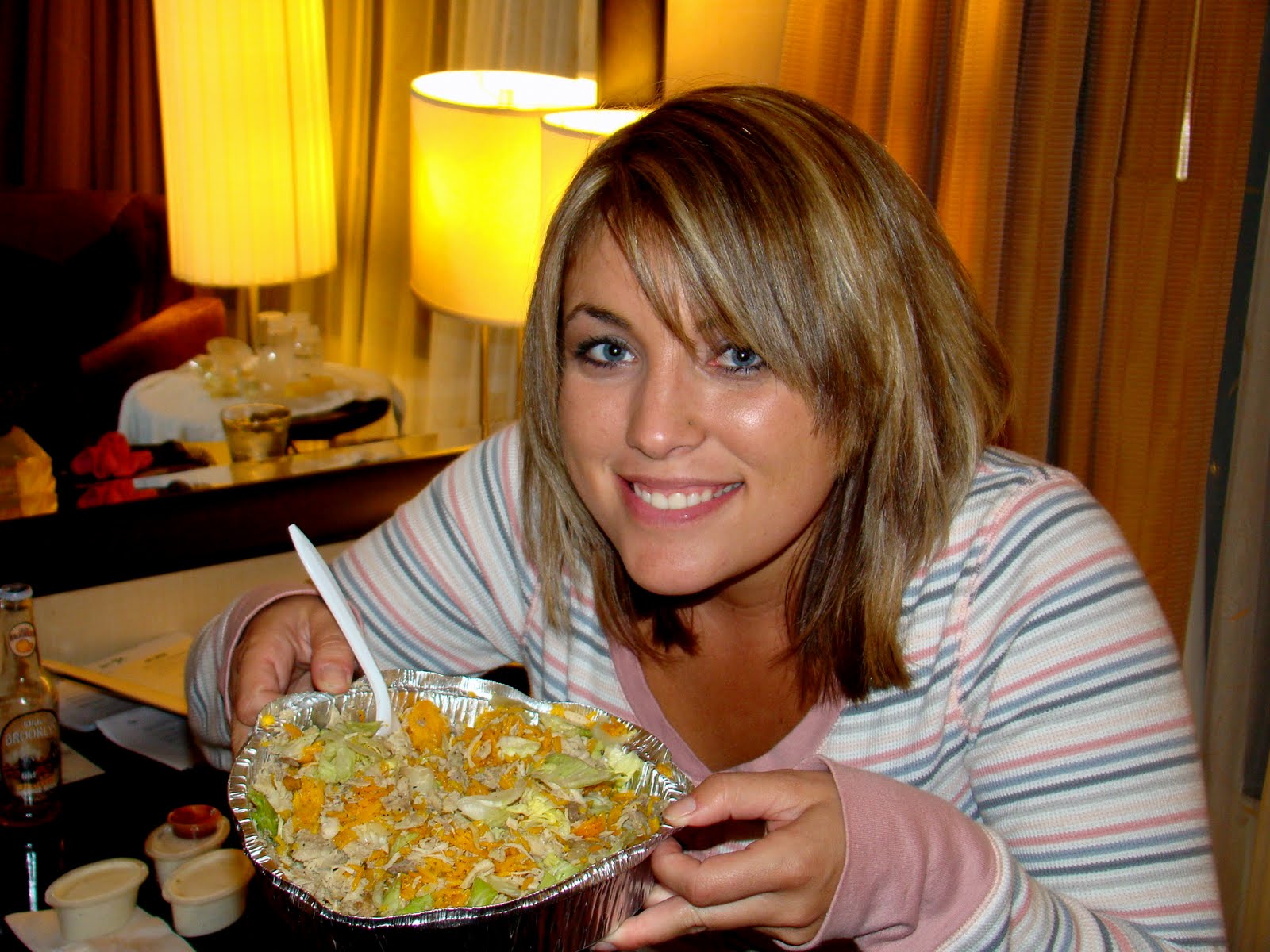