While I was having a mommy-meltdown last week it came time to go to the premier of New Moon (the second movie in the Twilight Saga). Honestly, if I hadn’t pre-purchased my tickets I probably wouldn’t have gone! I was a MESS! Thank the LORD I never drink caffeine (like seriously, all I drink is water and milk). You can ask anyone who knows me very well and they will tell you that if I drink some caffeine I become super, mega, hyper. This is a very useful in situations where I need to be awake and in a good mood!

Kye and I ate at Aunt Karen’s house Thursday night for dinner then I took him out to Zach’s parents to spend the night since duh he couldn’t stay at home while I was at the movie! After leaving Charlotte’s I hit up McDonald’s and got a HUGE iced coffee! It was so good and worked so well 🙂 I was W I R E D! I was mega hyped up and couldn’t stop talking, laughing and shaking. It felt like my heart was going to pump out of my chest haha. This was a blessing though, seriously. After my lack of sleep and tons of crying I needed to be in a good mood!

Last year for the Twilight premier Katie, Ashley, Hannah and I all went to Steak and Shake before heading to the theater and so we decided to do it again this year. It’s our Twilight Tradition 🙂 This year we added a couple new girls to the group and I’m so glad Robyn and Crissy came with us! They are both moms as well and totally understand the need to get out of the house and have a fun girl’s night! Crissy was hilarious, as usual, she came covered in glitter like the vampires when they go in sunlight. So cute!

Here we are (Katie and Hannah were…shocker…running a little late!) at Steak and Shake enjoying some YUMMY shakes! 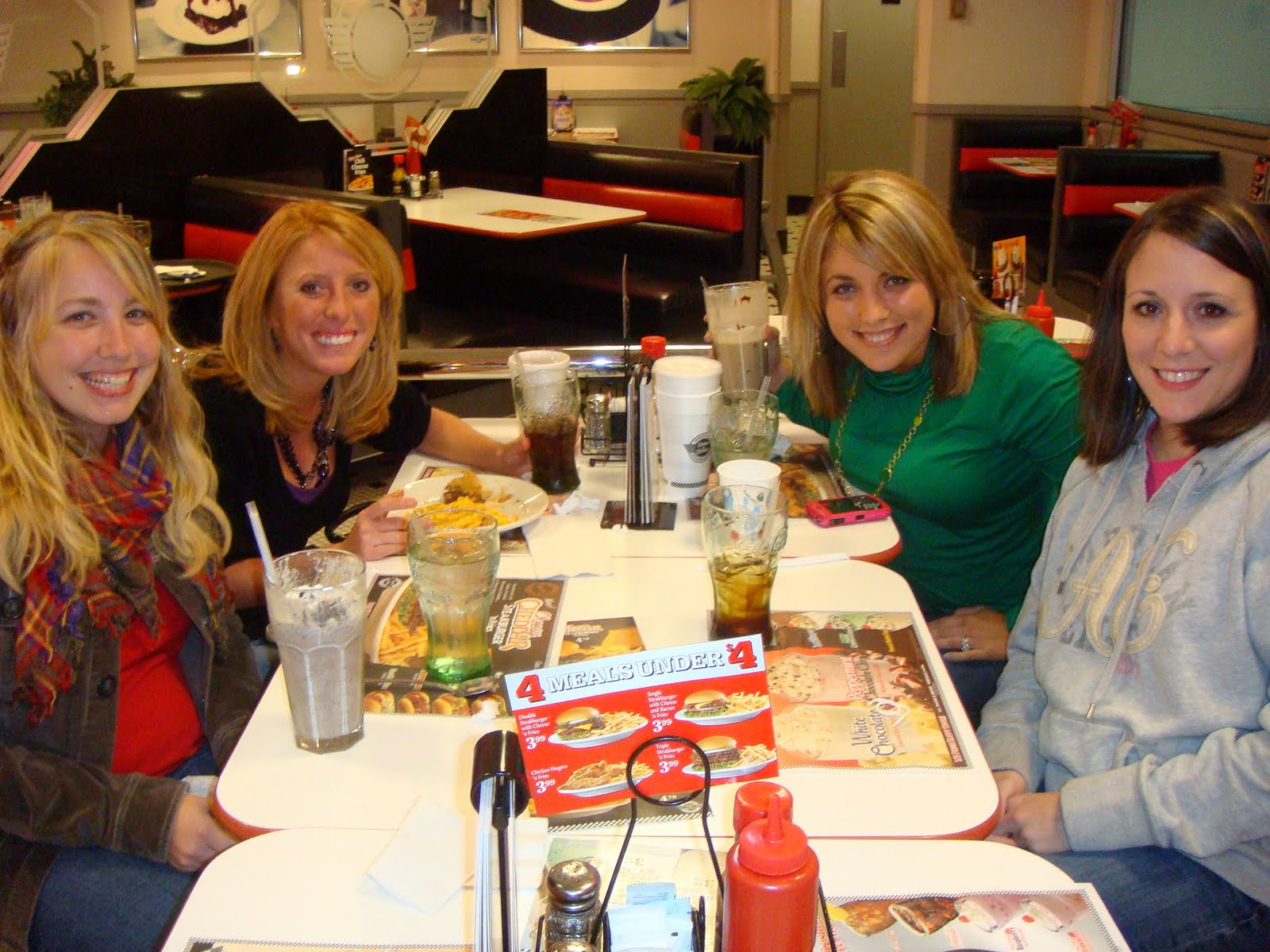 We didn’t plan on getting to the theater until 11:15ish since we all already had tickets but when Ash and I ran by there to get our real ticket (we pre-ordered online) we saw that people were already in line…at 9:30!!!! Luckily we ran into Nontalie, a girl we go to church with, and she texted me and offered to save us all seats because they opened the doors early and we were still at Steak and Shake while all the crazies in line were taking the best seats! We rush to the theater and had some decent seats together so I owe Nontalie big time! 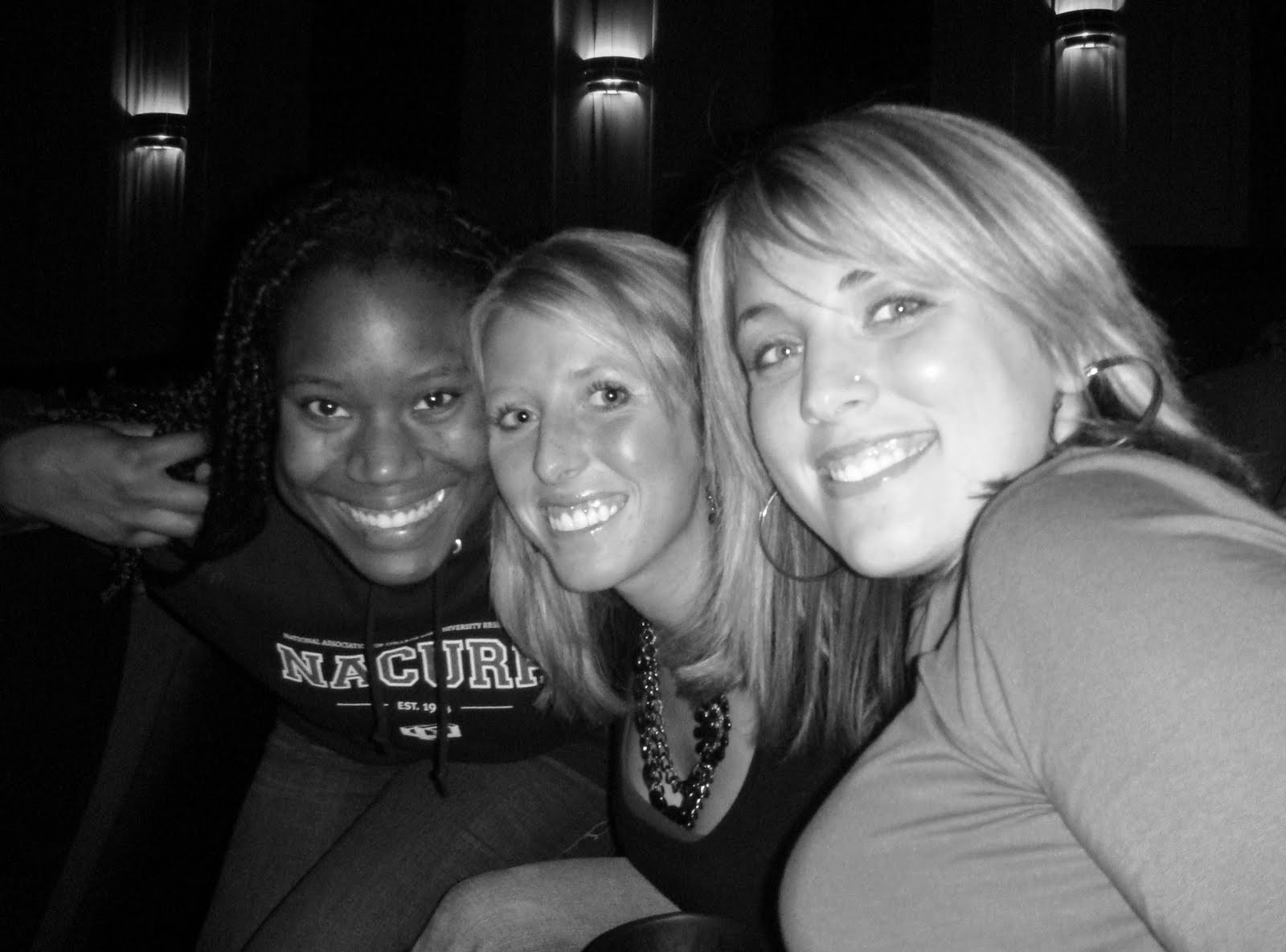 We were over an hour early but we had fun just talking and waiting and taking turns going pee before the movie started. Thankfully there weren’t a lot of previews! New Moon was my least favorite of all the Twilight books…it was AWFUL. I also wasn’t a big fan of the first movie. It was cheesy and poorly done. This movie, however, was so so so good!!! They turned a crappy book into a good movie and I guess the success of the first movie helped them get a bigger budget for this one! Yeah there were still a couple stupid parts, but overall it was great! Even Katie and Hannah had a hard time finding things to make fun of (okay Jasper was still pretty comical, as was the sexual tension between Charley and Bella and there were those dream scenes with Edward…but still!). 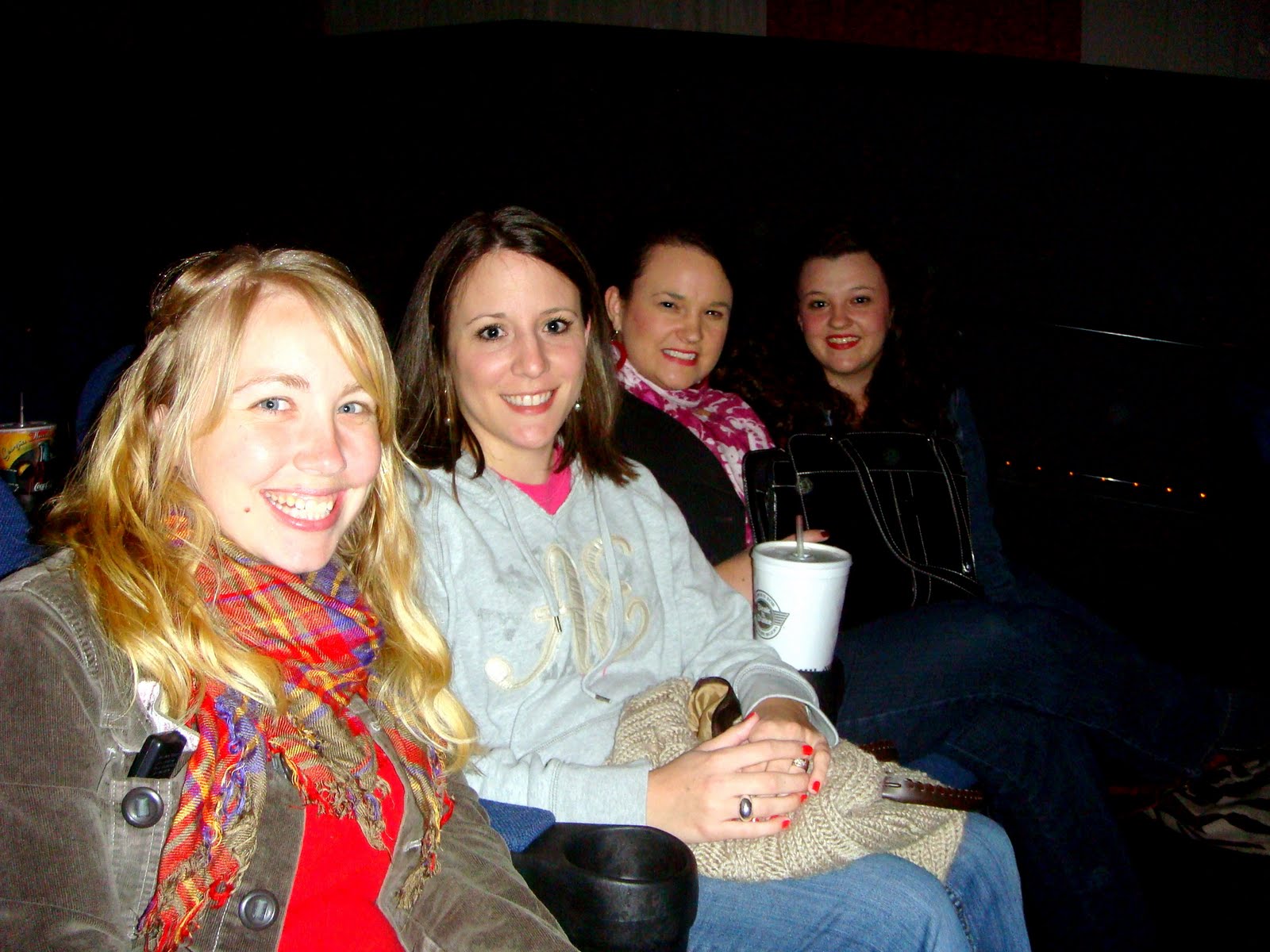 The only thing that really annoyed me was the crowd in this one. Yeah, Jacob has a GREAT body. Yippie. That doesn’t mean you need to act like he’s a GOD when clearly Edward is much closer to godly status 🙂  I thought every Twilight reader was an Edward fan and I just don’t GET the love for Jacob. Um, hello he sucks! haha! Crissy was fun to sit next to as she only read part of the book and she made sure to tell me when we had reached the part where she stopped reading…which was basically within the first 15 min haha. She also refers to the characters as their real names so I was totally confused when she kept saying “Robert” instead of “Edward” haha! 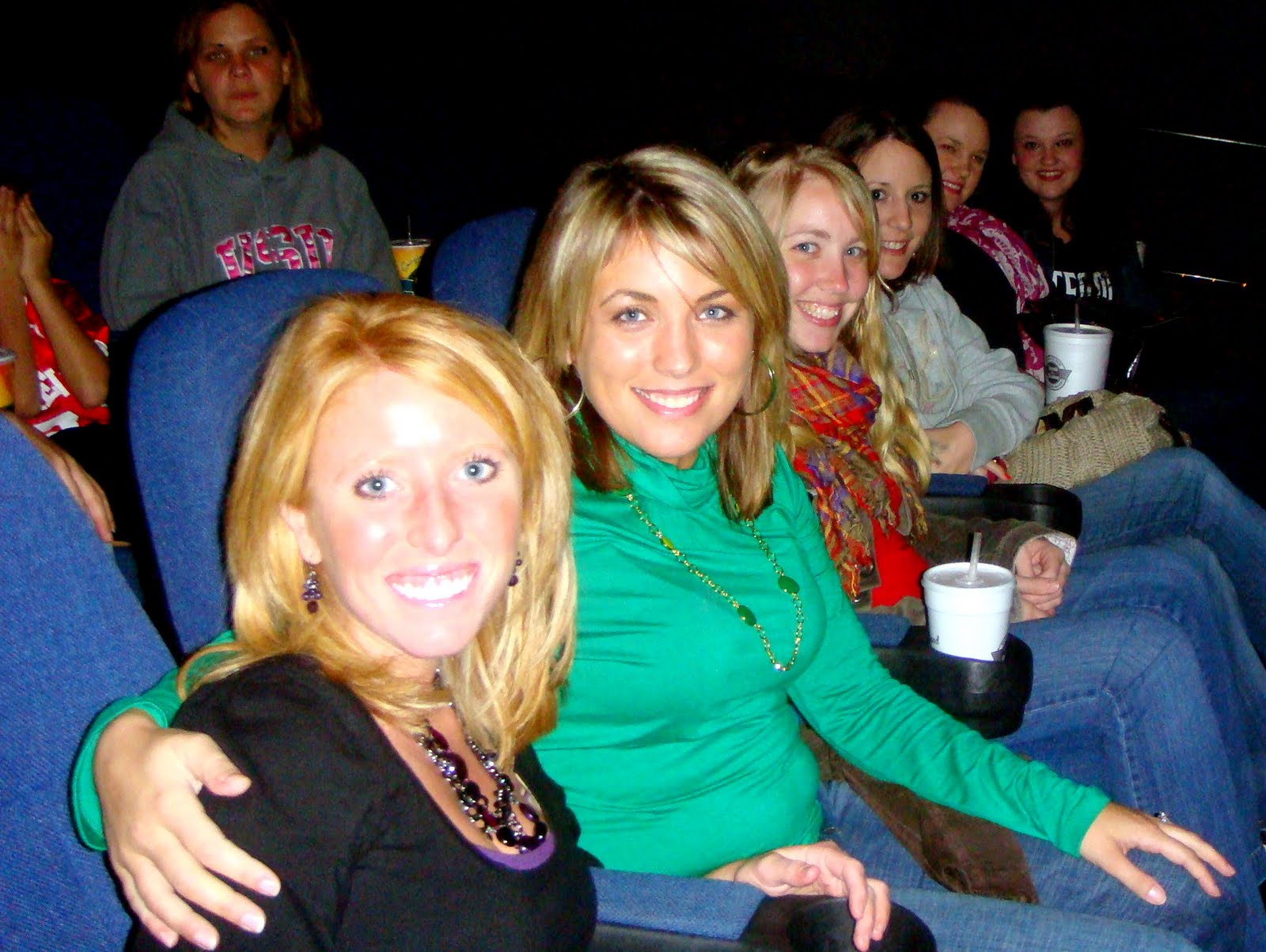 Overall it was a really fun night and was worth being so tired the next day. Ashley and I got back to my house at 3 am! We had to get up at 7 the next morning to drive to Jacksonville. So after a day of sobbing and a week of no sleep I only got 4 hours of sleep then DROVE 4 hours total in one day. YUCK! We were both soooo out of it haha. It was pretty funny. I had an appointment at David’s Bridal to finally pick out a bridesmaids dress for my brother’s wedding and I found the perfect one! It’s all satin, strapless, short, and has pockets! I love it and it was only $99!!!! Great deal 🙂 We planned on shopping but didn’t have any luck. We did however get free massages because Taylor Hicks was performing that night and they had a ton of booths set up! And we ate at Maggianos which was yummy but our service was so bad that I not only didn’t tip, I also complained to the manager! Once I got home with Kye I fed him and put him to sleep then I crashed! I was sooo exhausted but we had a fun time and I’m excited to Eclipse to come out in June!!! And to take Zach to see New Moon soon 🙂 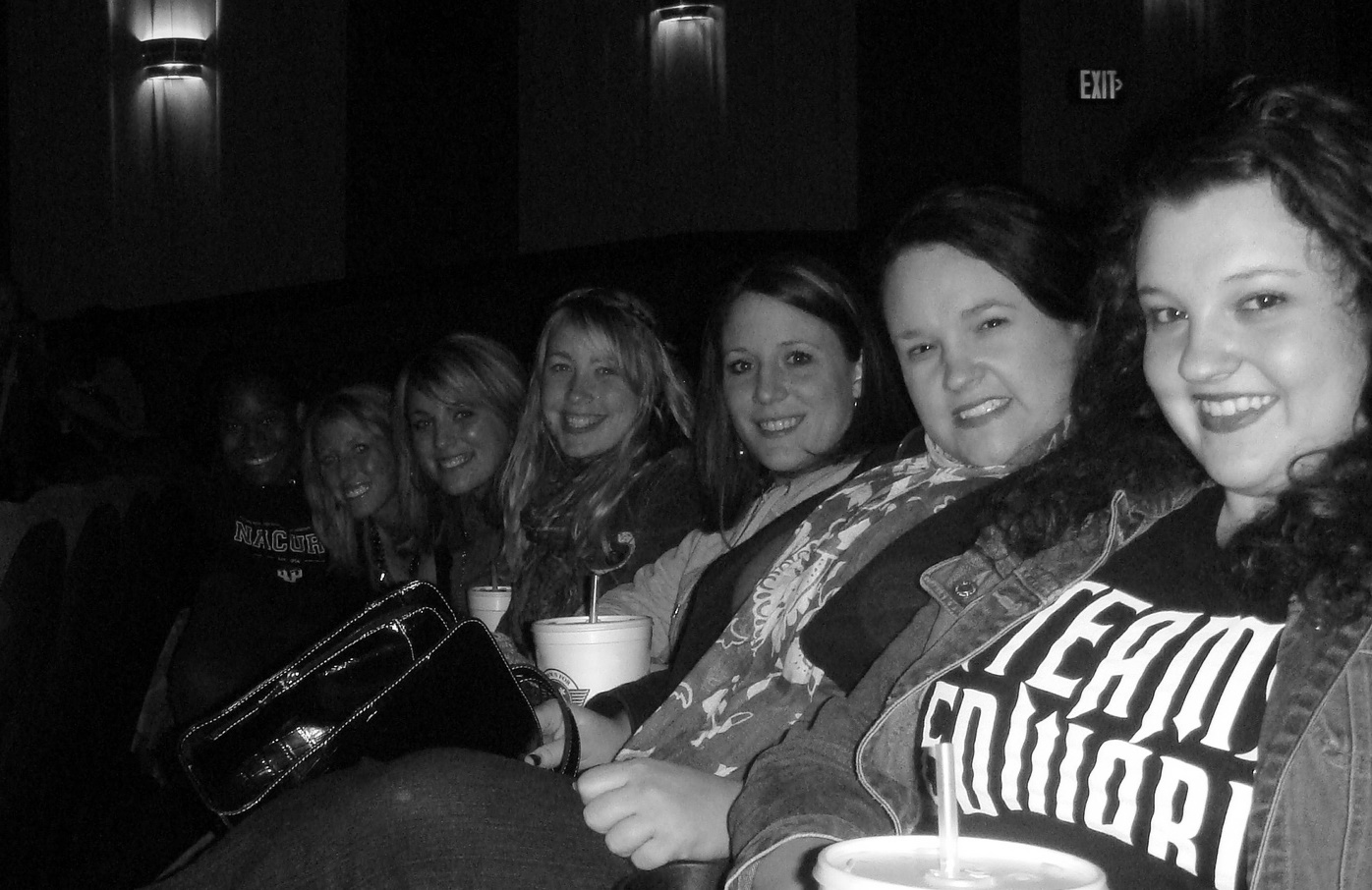